Tuesday 6th July 2021. Yes, I know that obsessing about the weather is terribly British, but it simply has to be pointed out that today was the first day that the weather outlook for us here

was better than at home.

In reality, the weather here today really was pretty good – even, at times, a little too warm.  So, we’ve been lucky so far.

Our first stop was actually to the “supermarket” just along the road so we could buy something that would serve as lunch.  It wasn’t what we’d think of as a supermarket and the selection was a little sparse, but we found some pizza-ish sort of things that would probably do, and – mirabile dictu – a couple of apples.  To be honest, whilst the food we’ve eaten in the hotels and restaurants here has been very well-cooked, well-presented and tasty, we’ve discovered that They Don’t Do Fruit And Veg Much here, so the quest for dietary fibre is often, erm, fruitless. That’ll be me showing my age, then.

So: a morning of waterfalls beckoned.  Firstly, the most powerful waterfall in Europe – Dettifoss.

As I hope you can hear from the sound on the video, this is an awesome thing. It must be said, though, that we preferred those from yesterday.  Dettifoss, because it’s carrying such a volume of glacial rock fragments, actually looks a bit muddy.  I know it’s pathetic to expect pristine white water, but there you go: we’re tourists – what do we know?  Dettifoss is one of several waterfalls along a canyon, and there was an insight into the impact of the glacial sediment on the water flow via a view of whatever the geologists would call the side street of a canyon. 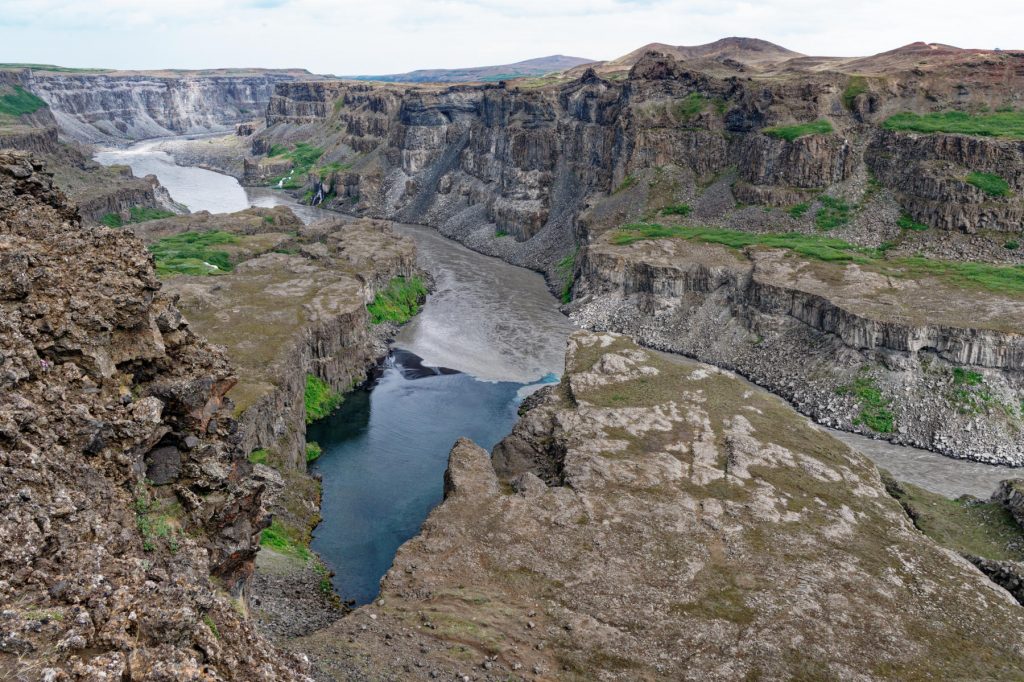 You can see the clarity of the water which is out of the mainstream.

The second waterfall of the day is visited on the same hike which took us to Dettifoss. It’s called Selfoss, and it’s also pretty impressive. 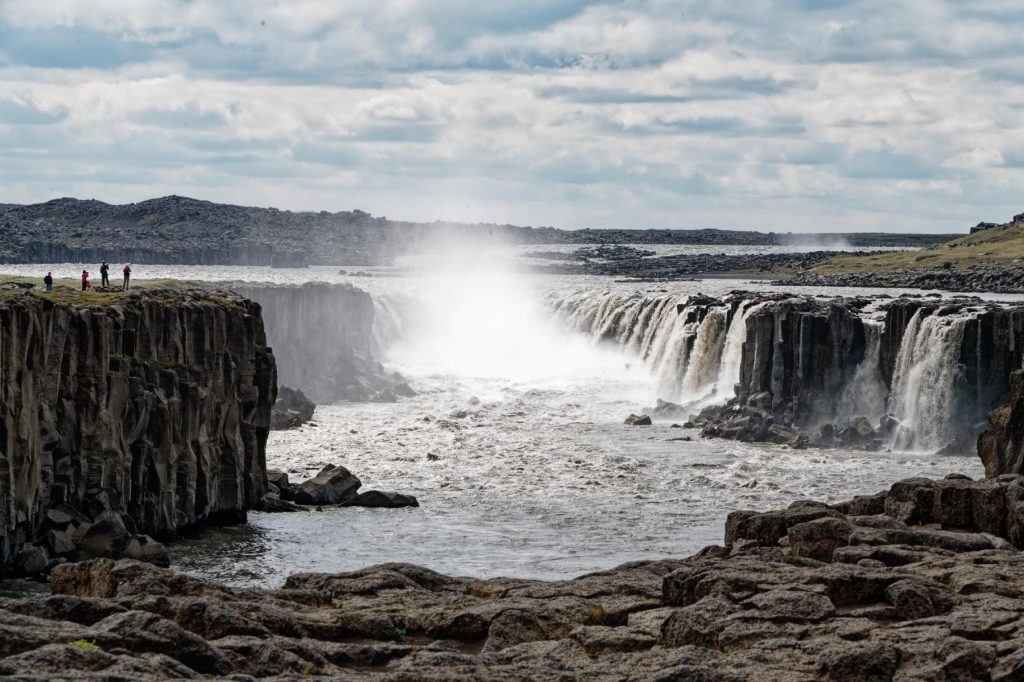 You can see photographers on the far side of the canyon. These are the keen beans who have risked the tyres and suspension of their vehicles and a possible broken ankle or two to get to the Dedicated Photographer side of the canyon. Ok, the view of Selfoss would have been better from that side, and you can also get a Classic Shot of Dettifoss from over there; but our schedule, and my not-preparedness to lug a tripod over rocky terrain and spend much time setting up long-exposure shots, conspired against my achieving anything other than the standard Tourist Pics (which I’m very happy with). Dagur did his Pro Photographer bit as best he could at Selfoss, given that his clients were too pathetic to go the extra mile. 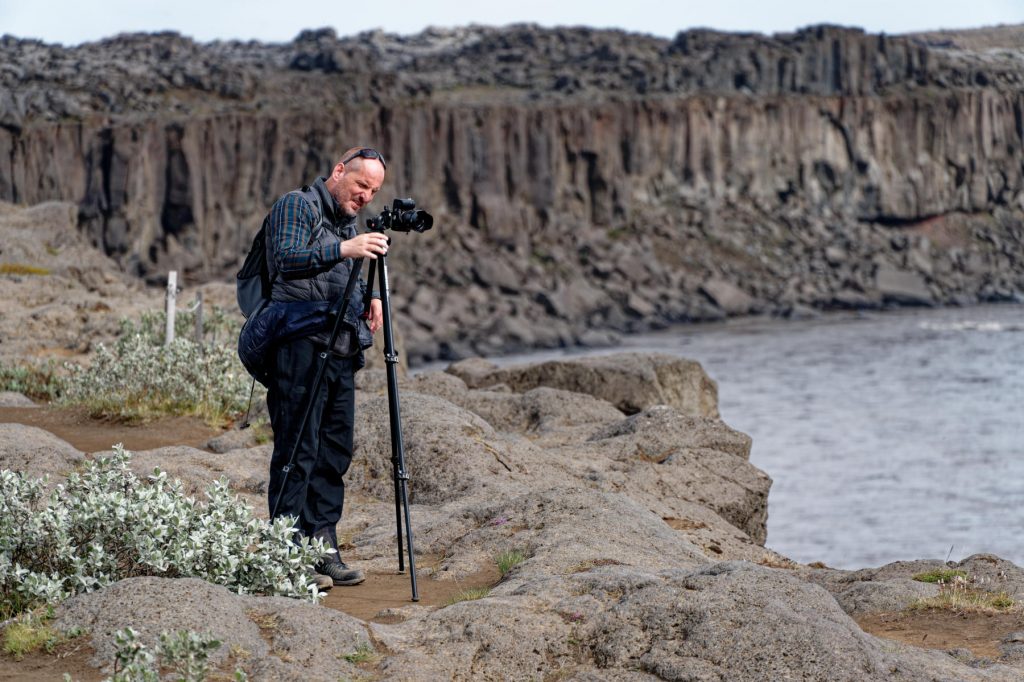 But the two falls were anyway impressive to see.

And that wasn’t the end of the foss we had to make this morning, as there was a third waterfall to visit, Hafragilsfoss, down another rocky track. 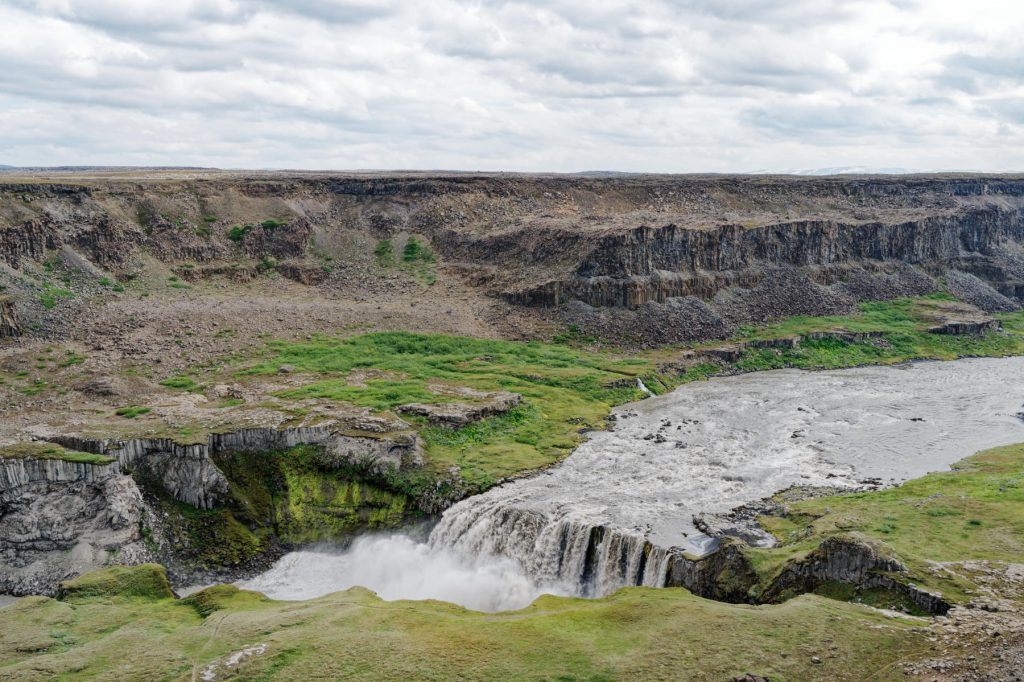 It wasn’t possible to get really close to this one because the track, even under normal circumstances a somewhat tricky descent, was impassable because of rockfall.  Such a shame. No, really.

It was getting towards lunchtime by this stage, and we were understandably anxious to get at our pizza-ish goodies, and Dagur suggested that we could hike to lunch at Katlar, which was along, you guessed it, a rocky track a little further downstream in the canyon. So we loaded up with lunch goodies and set off. We hit a decision point and, through a process that I don’t quite understand but am very grateful for, took a side track. This was actually a revelation, as it led through a landscape that we simply hadn’t come across before in Iceland, involving, as it did –  trees! 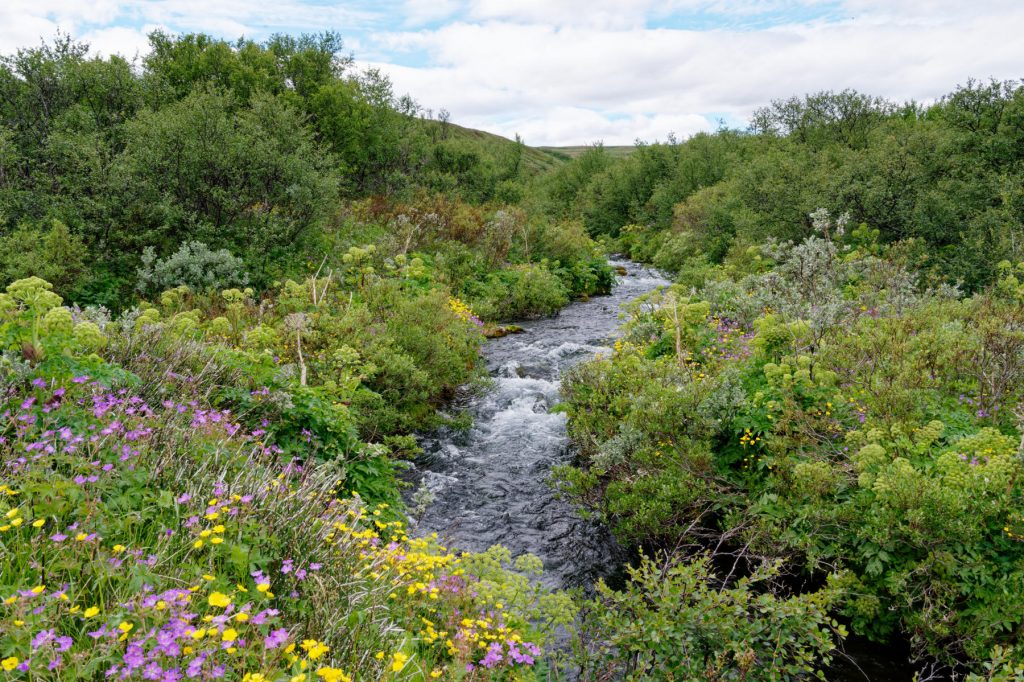 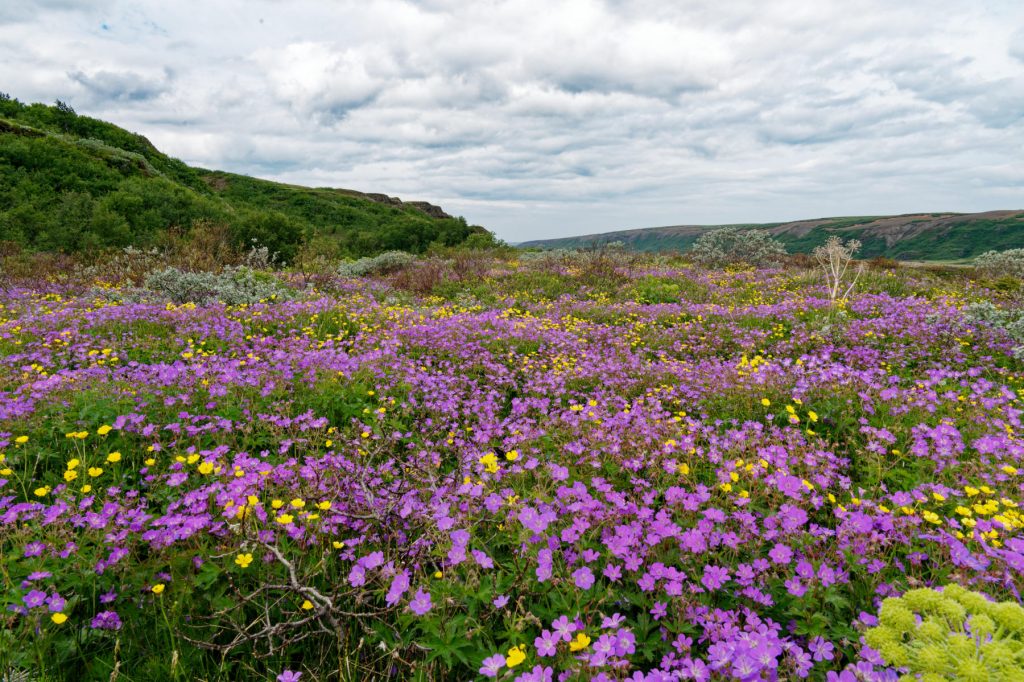 It really was a gorgeous walk, beside a river which of course gave rise to more photo opportunities. 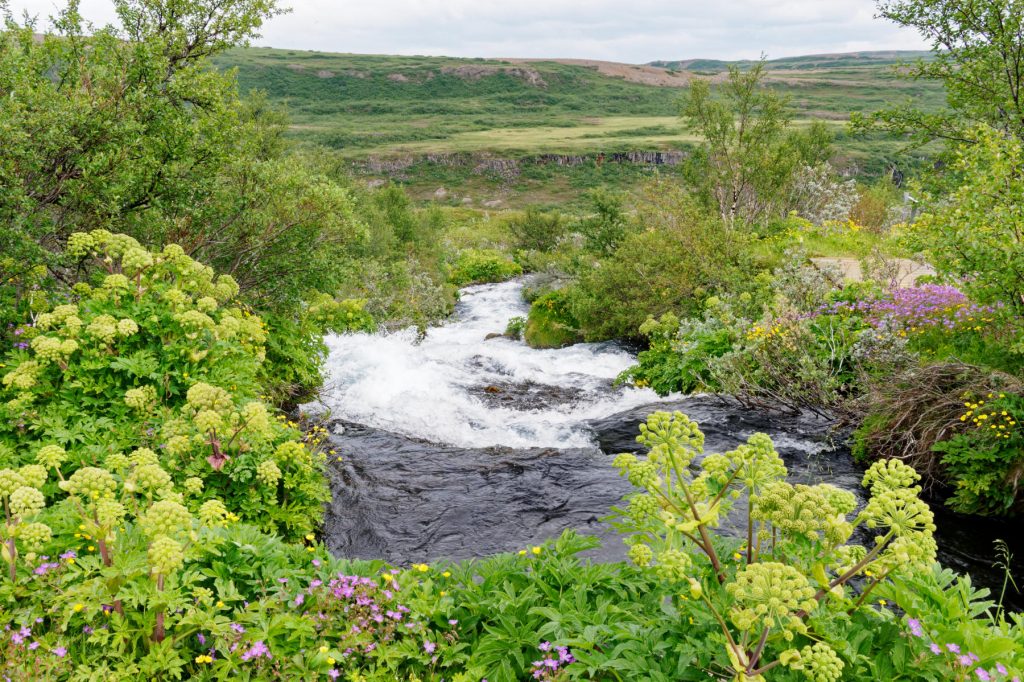 After a while, we wound our way back towards Katlar, which is a gorgeous gorge 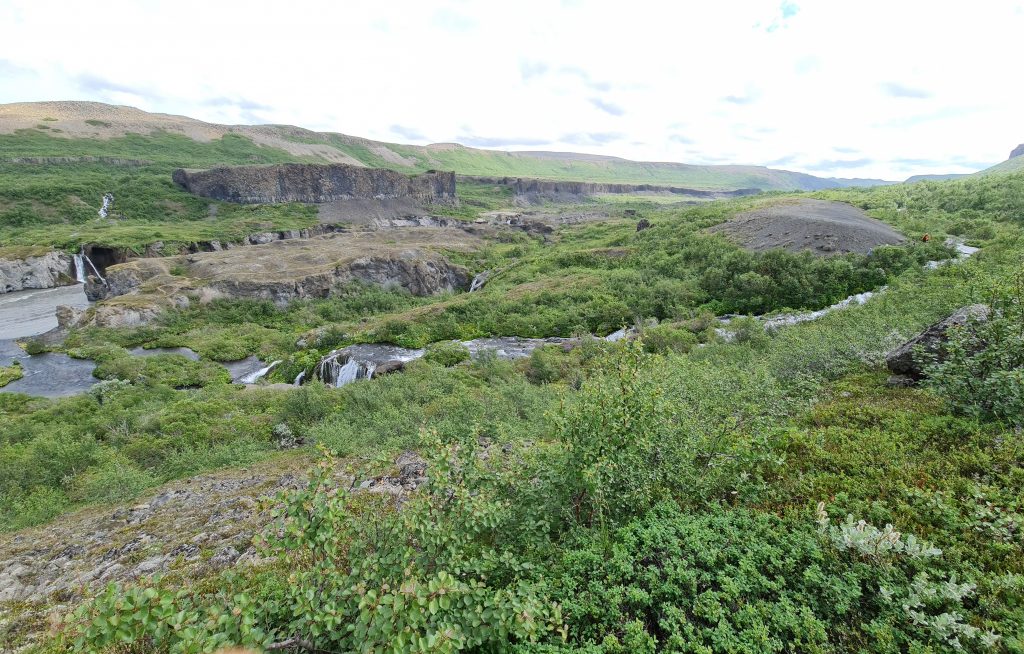 but decided in the end, and mainly because of the increasing numbers and importunateness of the flies, to head back to the car, where we ate our lunch in air-conditioned comfort but with no view.

At the next stop, we agreed between us that it wasn’t worth spending time heading toward the lava cave that Dagur had originally in mind (we’d already passed a couple, maybe not so grand, earlier in our walk).  However, the car park for that trek was interesting as it illustrated the difference between how serious Icelanders go on serious camping holidays 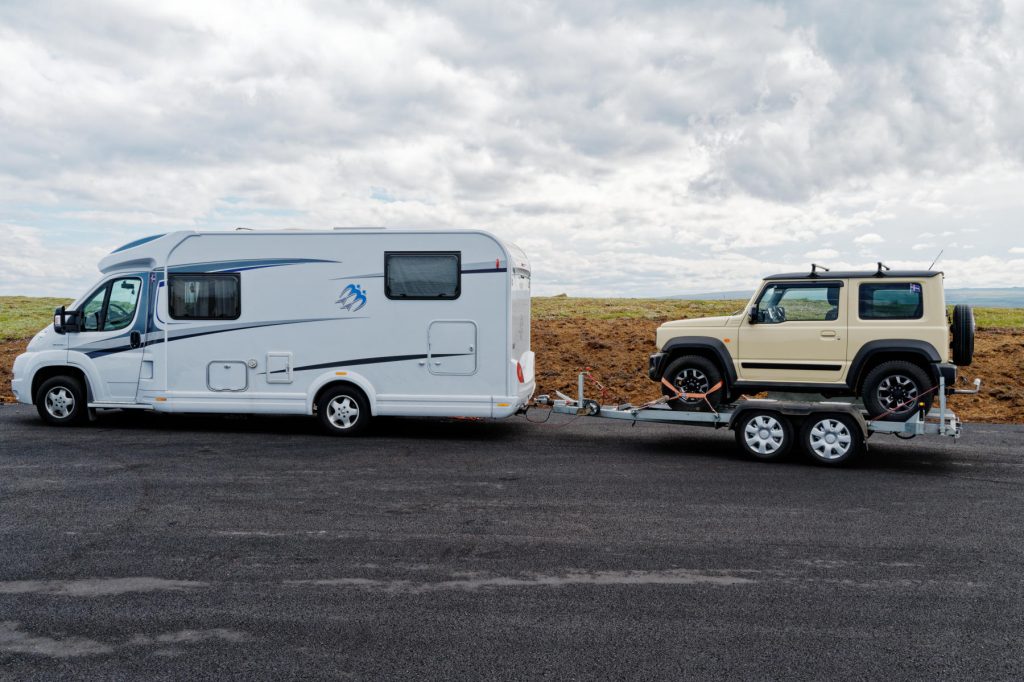 and how the Germans do it in Iceland. 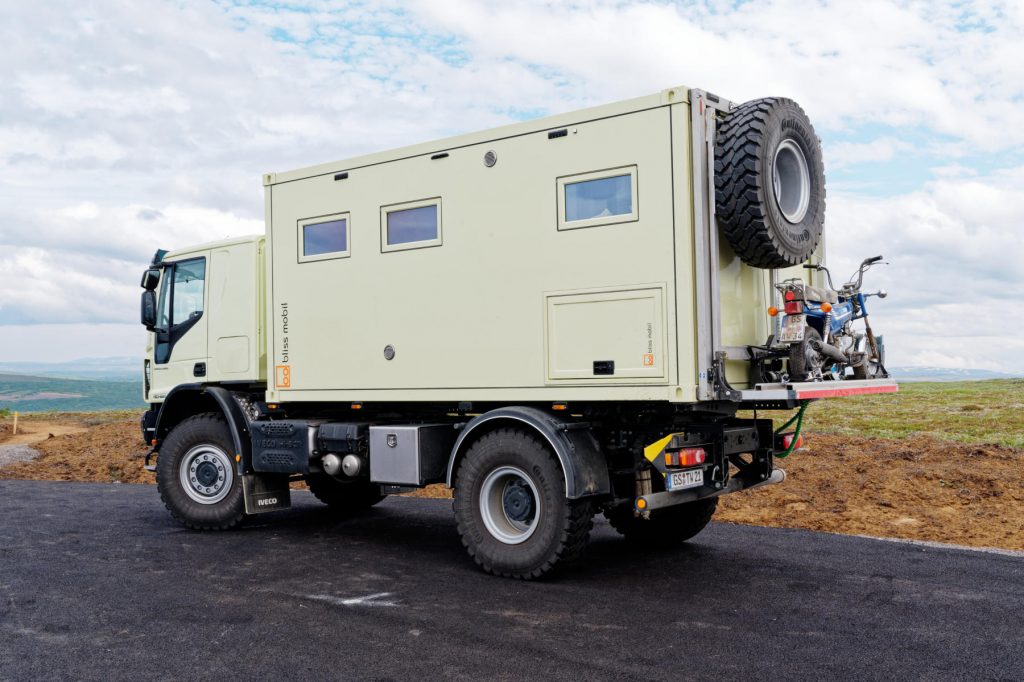 After this, we went to an oasis of calm called Ásbyrgi Canyon.  This is a huge horseshoe-shaped wall of rock with a lake at its foot (Icelandic legend has it that this was a hoofprint of Odin’s 8-legged horse, Sleipnir. I couldn’t possibly comment on the veracity of that.)

And yes, a rocky trail leads down to the lake and at first blush it didn’t look as if it was going to be all that calm 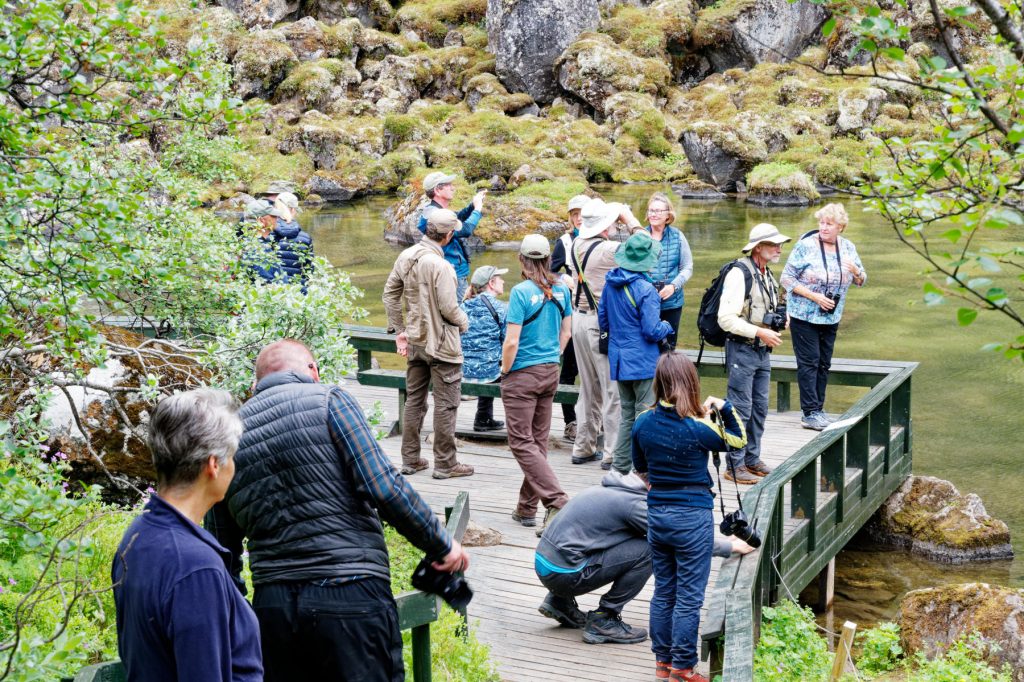 but fortunately the bus load of Americans left shortly after we arrived and it settled down a bit. From the lakeside, you can’t capture the scale of the place in a photograph. You have to climb up to a viewing platform to do that. 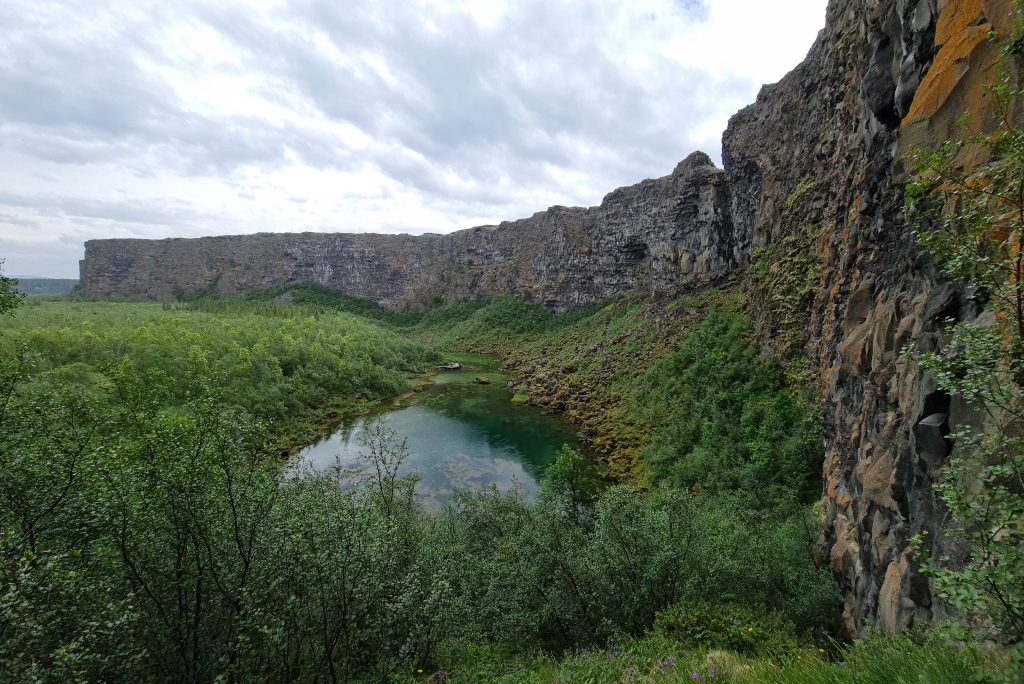 But I did try a little snippet of video (creative director again was the distaff side) to give some idea of what it’s like on the lakeside.

We then headed back to the hotel, via a small town called Husvik, the Whale Watching capital of Iceland, where Dagur took the Land Rover off to clean it whilst we pottered around. The town is typical of our experience so far here, in that there are some attractive buildings 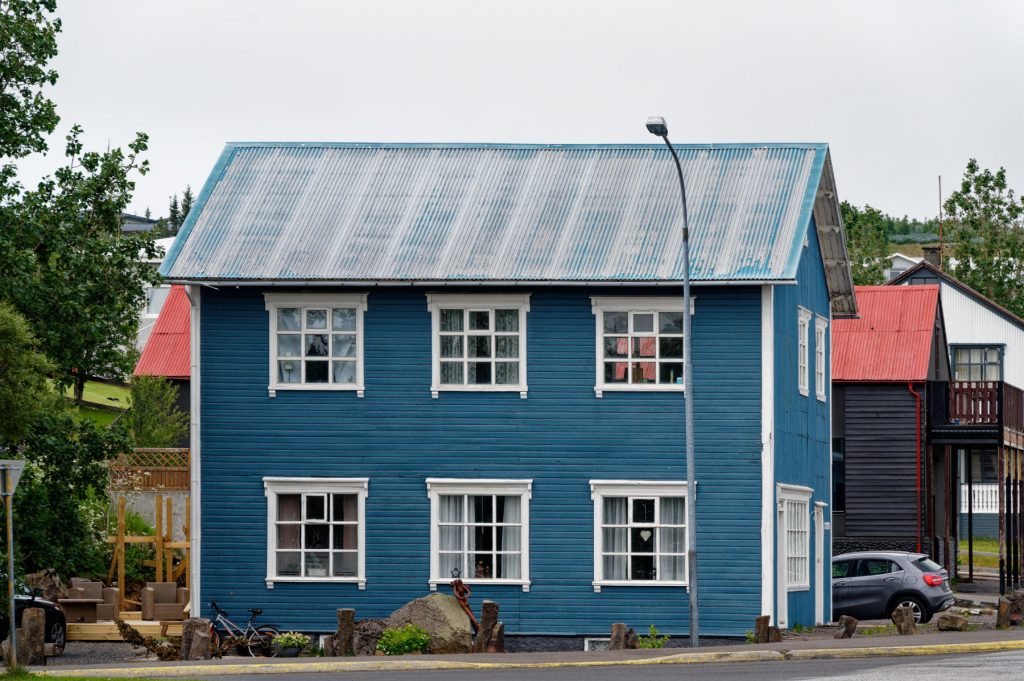 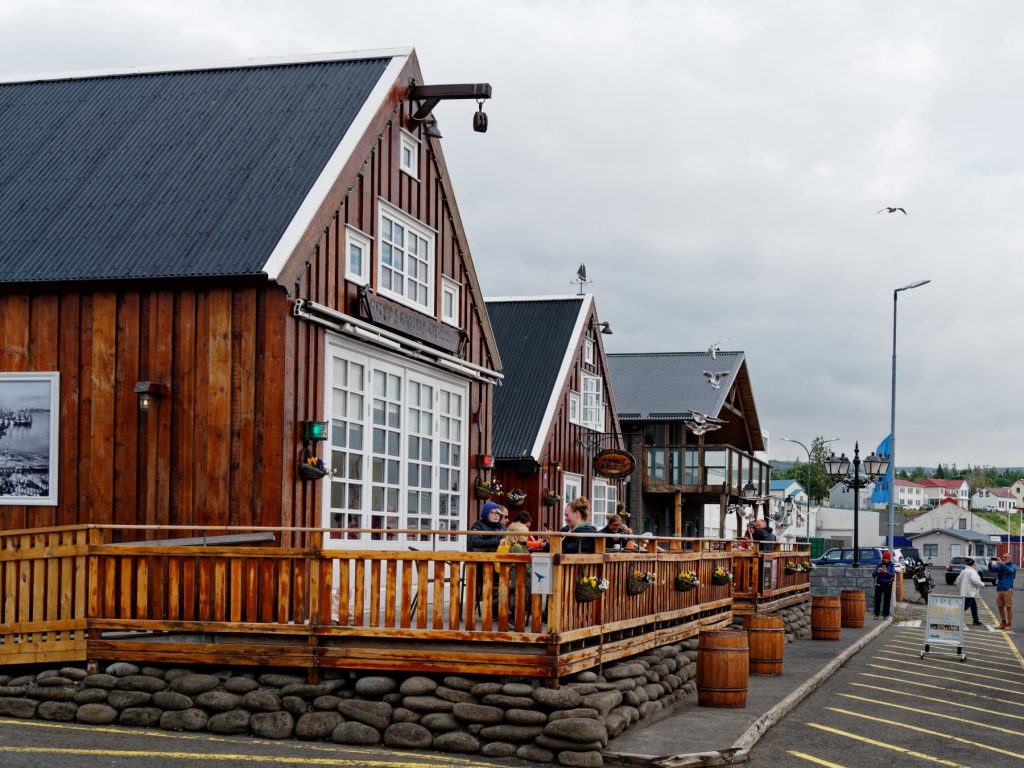 but much of the town is basically workmanlike rather than pretty.  It does, however, feature an unusual church, which we of course added to our collection of same. 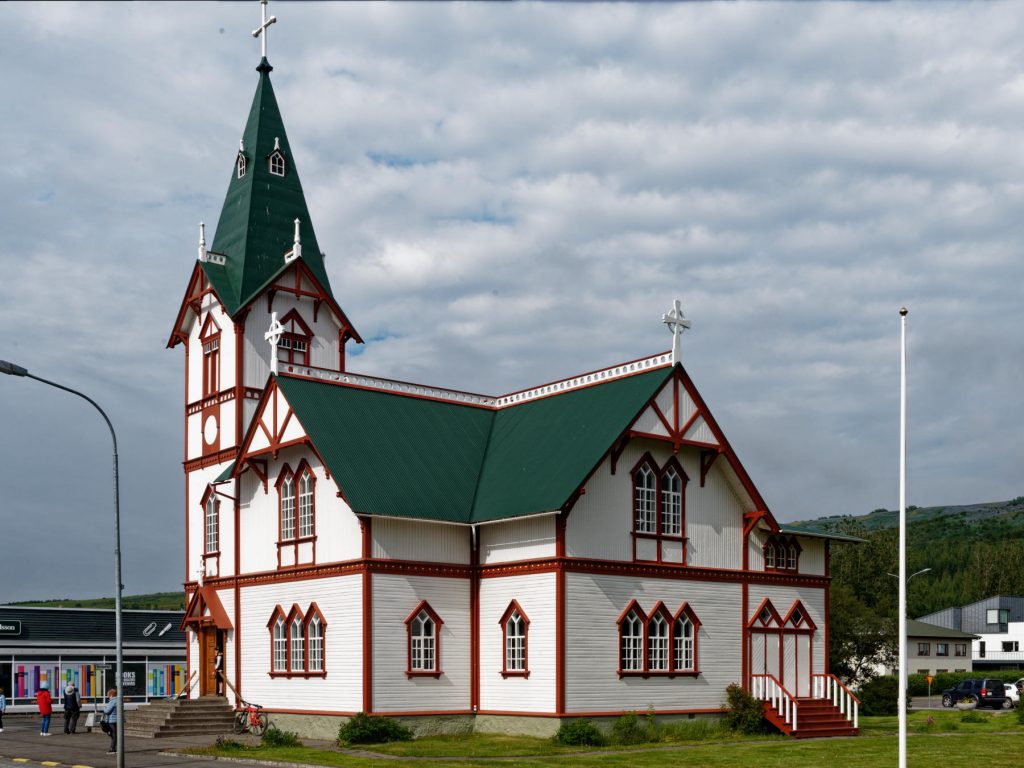 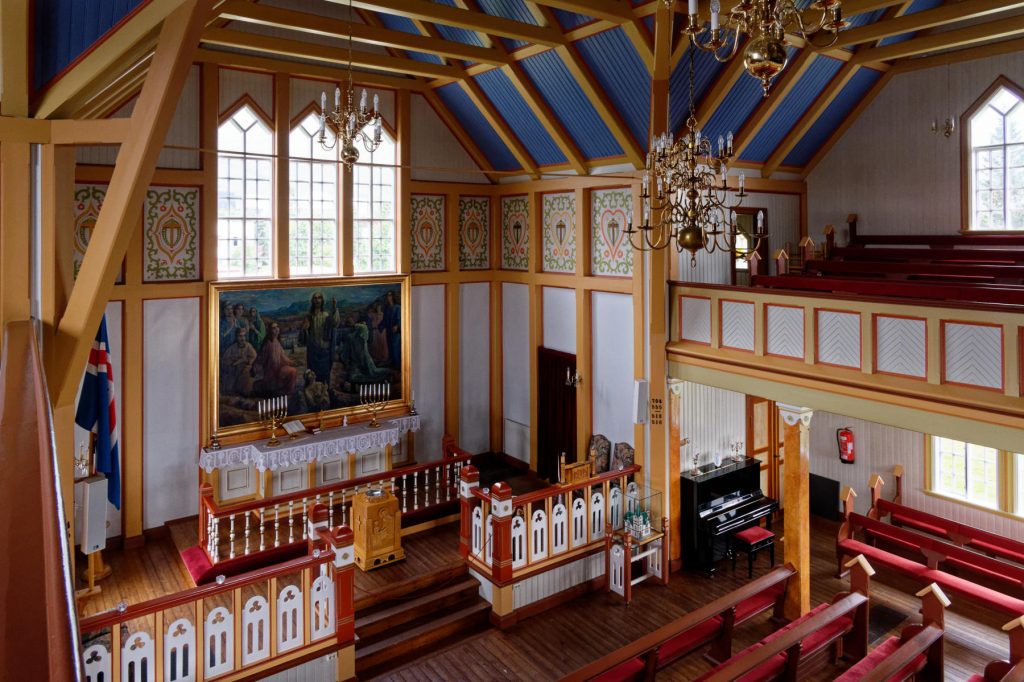 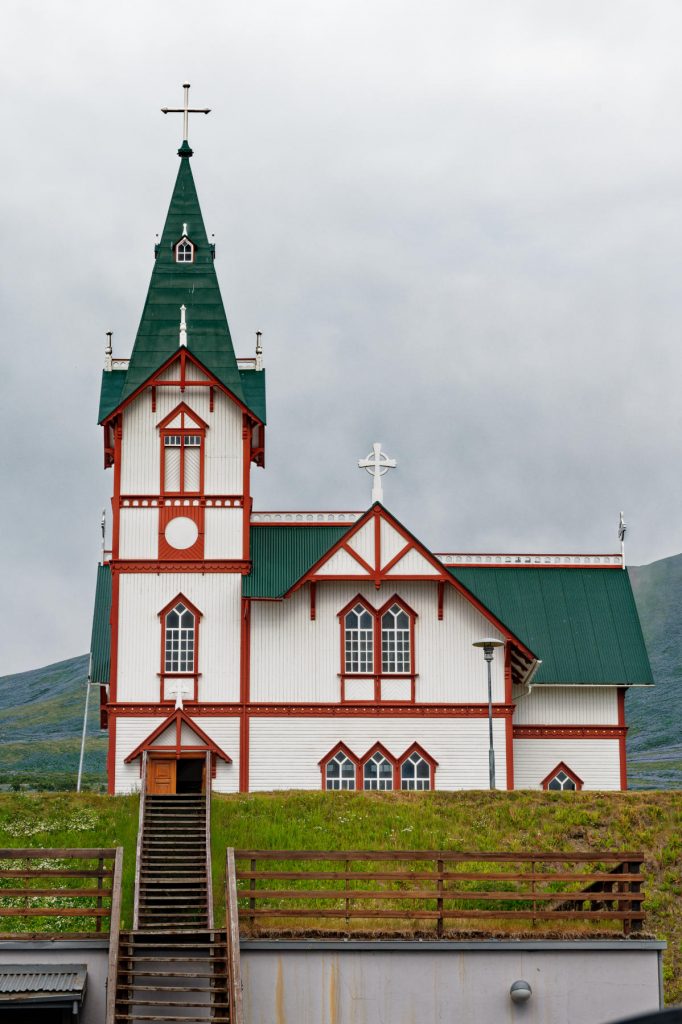 After Husvik, we headed back to the hotel but Dagur took us by an alternative route which enabled us to get some insight into the reason for the lupins in Iceland.  You  can see them dotted about in the laval soil here. 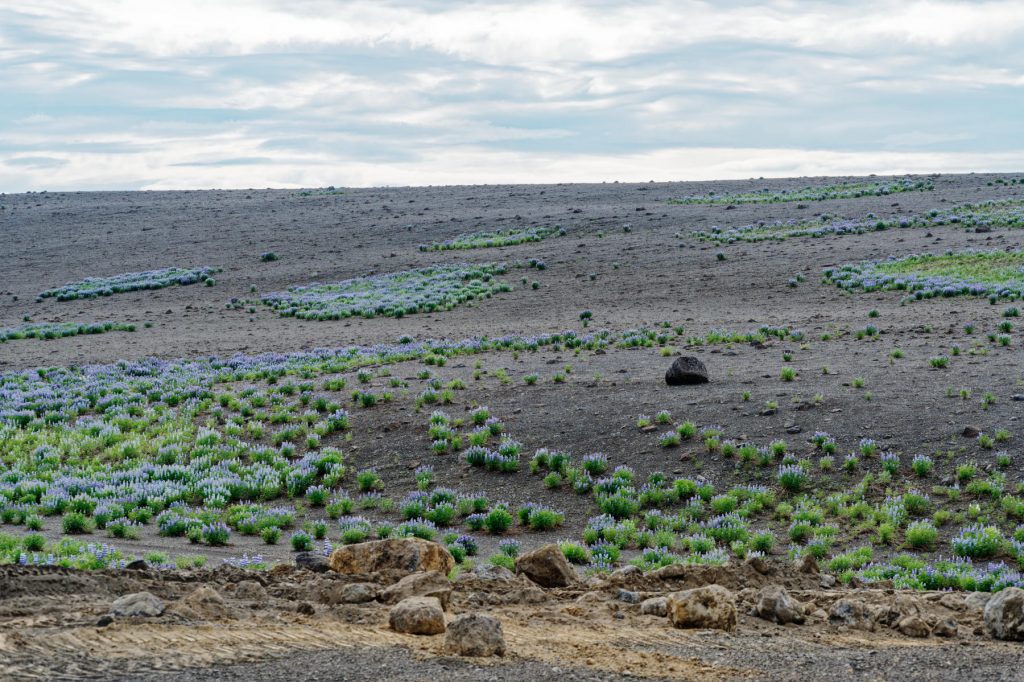 Dagur told us that he remembered being driven along this road by his father when he was quite young, and it was just black sand. And this sand had been a major problem, particularly as it blew in the wind; soil erosion was one issue, and damage to cars’ paintwork was another. So the lupins were planted to combat soil erosion and they work – but it’s still ongoing and will be a task that carries on for generations to come.  The authorities are trying to leaven the mix with grass planting as well as lupins and this seems to be working overall; the problem is really to decide exactly where to cover with the programme, as a huge area is affected by this issue.

And thus ended another varied and interesting day, apart from the bit where Jane educated the hotel bar staff about Boulevardier cocktails. We have another V&I day in prospect tomorrow, with – who knows? – perhaps even more puffins! But much of the schedule will be decided on the hoof and so you’ll simply have to come back here and find out what we got up to, won’t you?