All too soon our day of leisure in Cusco was over and the relentless tourism resumed with an 0500 alarm set for the next day, all so we could go and catch a train. Not just any old train, though – we would have got up later for that – but the Titicaca train, operated, as is the Machu Picchu service we travelled, by PeruRail, and thus sharing many of the same characteristics – friendly staff, drinks and food on board and a fashion show to try to extract a few extra tourist dollars. However, the journey we were undertaking was a significant one – over 10 hours to cover the 384 kilometres from Cusco across the mountains to Puno, on the shores of Lake, you guessed it, Titicaca. (Starting altitude 3,354m above sea level, finishing at 3,828m and, in the middle, getting up as high as 4,319m – over 14,000 feet, and within a very short spit of 2.7 miles high. By way of comparison, the cabin pressure you experience on a typical jet flight is equivalent to an altitude of 2,000 – 2,500m).

If one has to spend 10 hours on a train going over very significant mountainous terrain, it’s reassuring to know that a full meal (and bar) service is provided, as is an observation car. 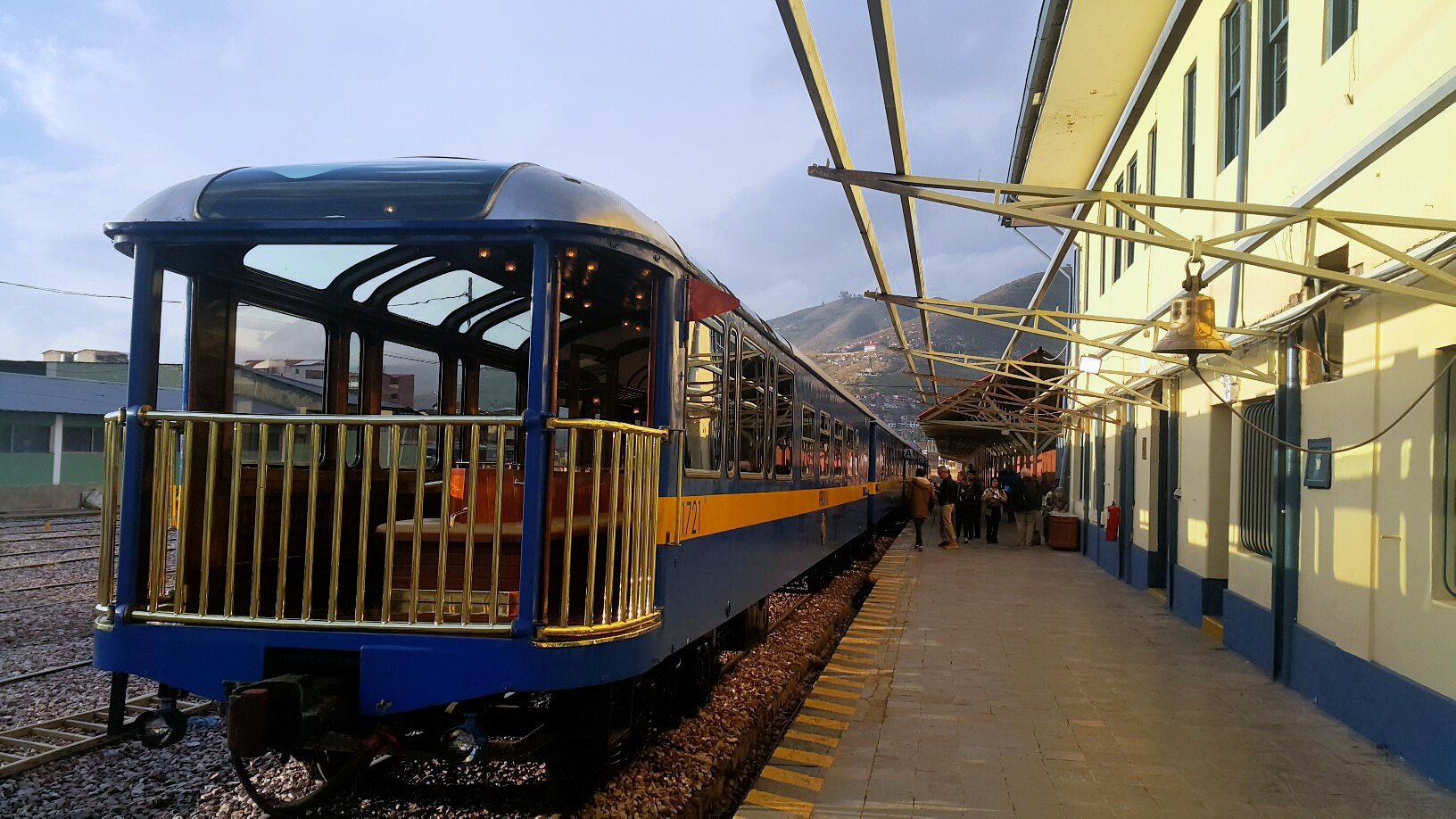 Prompt at 0710 we started the journey and it was immediately clear that we were in for some great scenery. 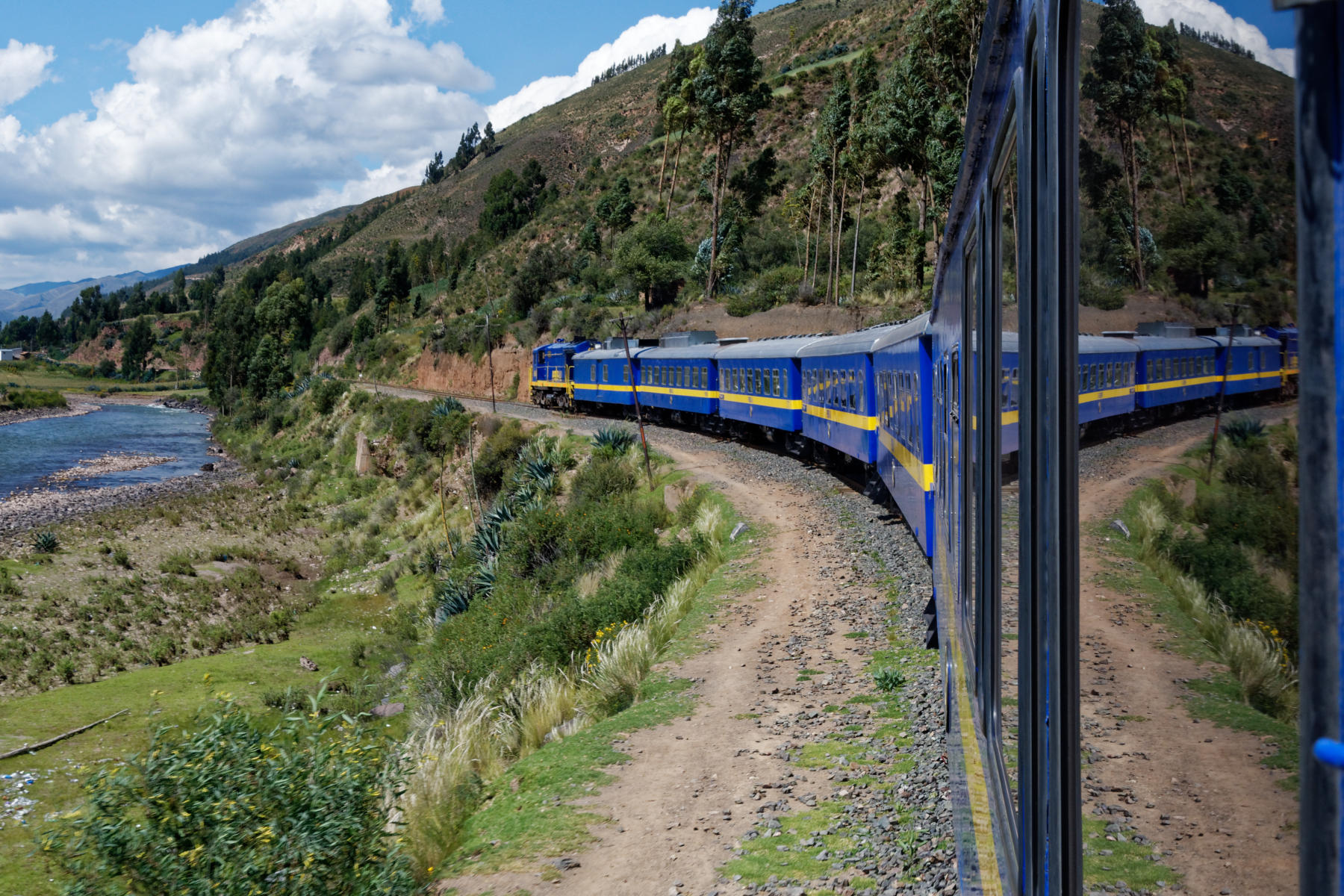 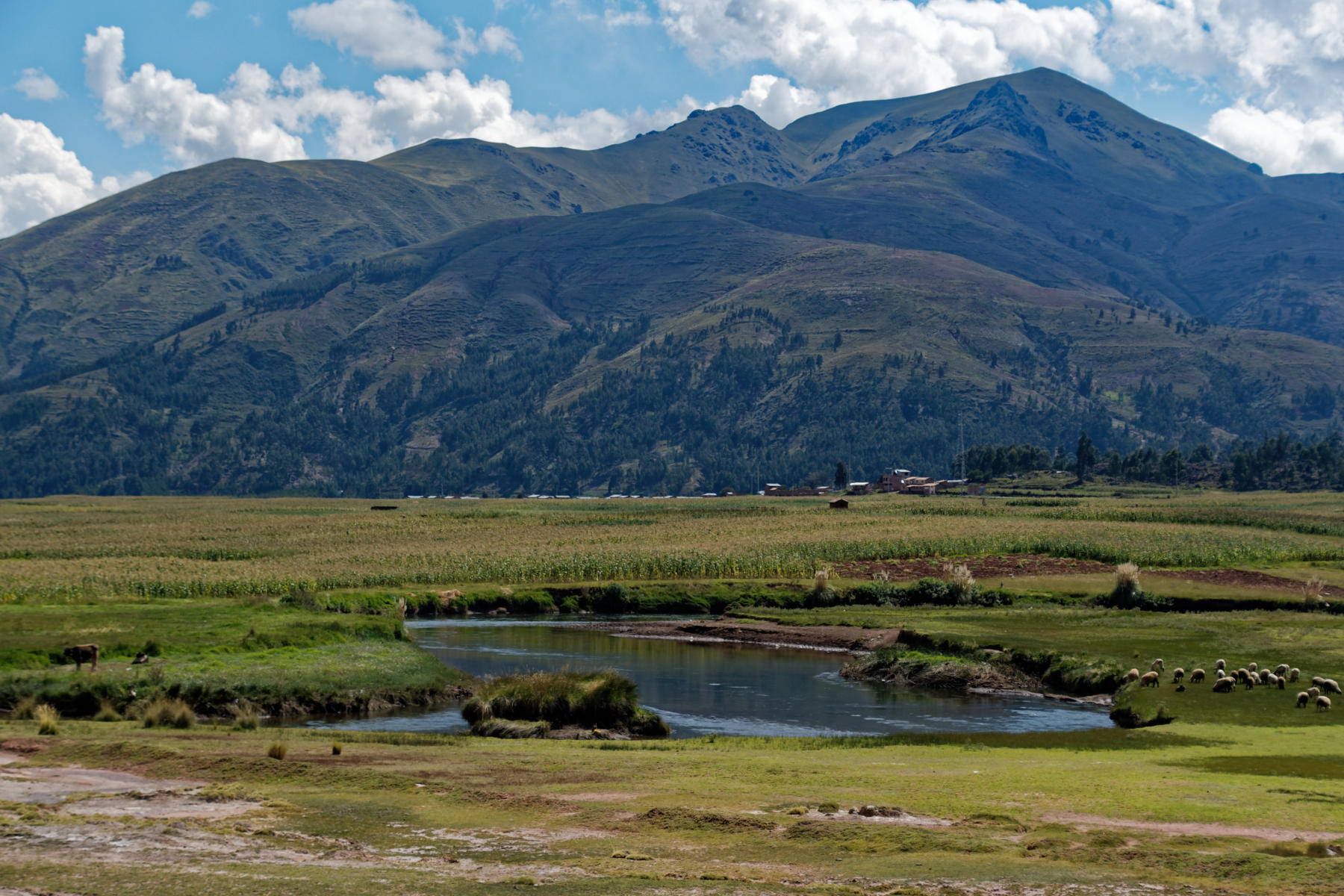 It was also nice to see the locals waving a friendly greeting as the train went by. 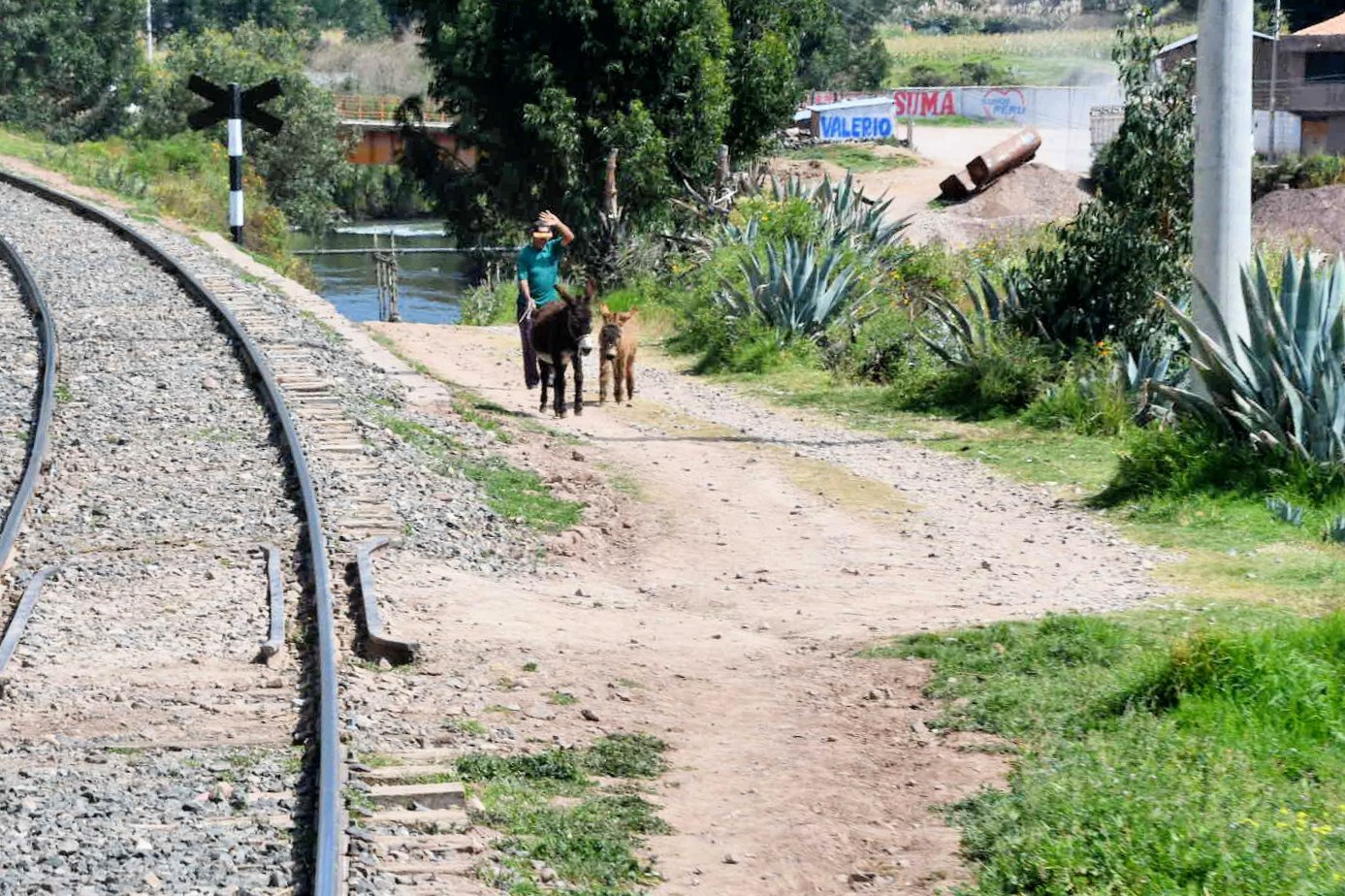 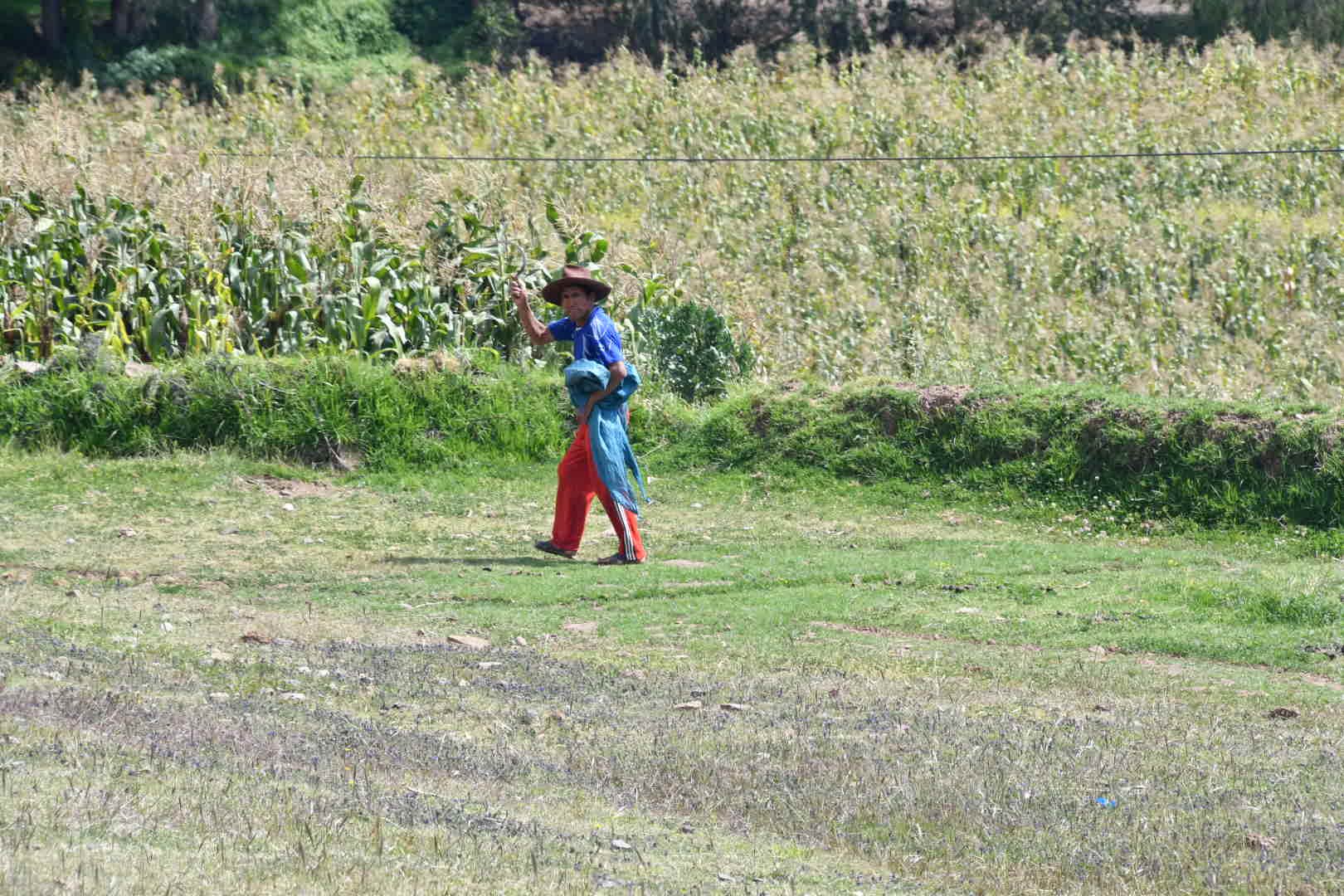 as well as some who were simply gettiing on with the daily grind of, for example, subsistence farming of quinoa, 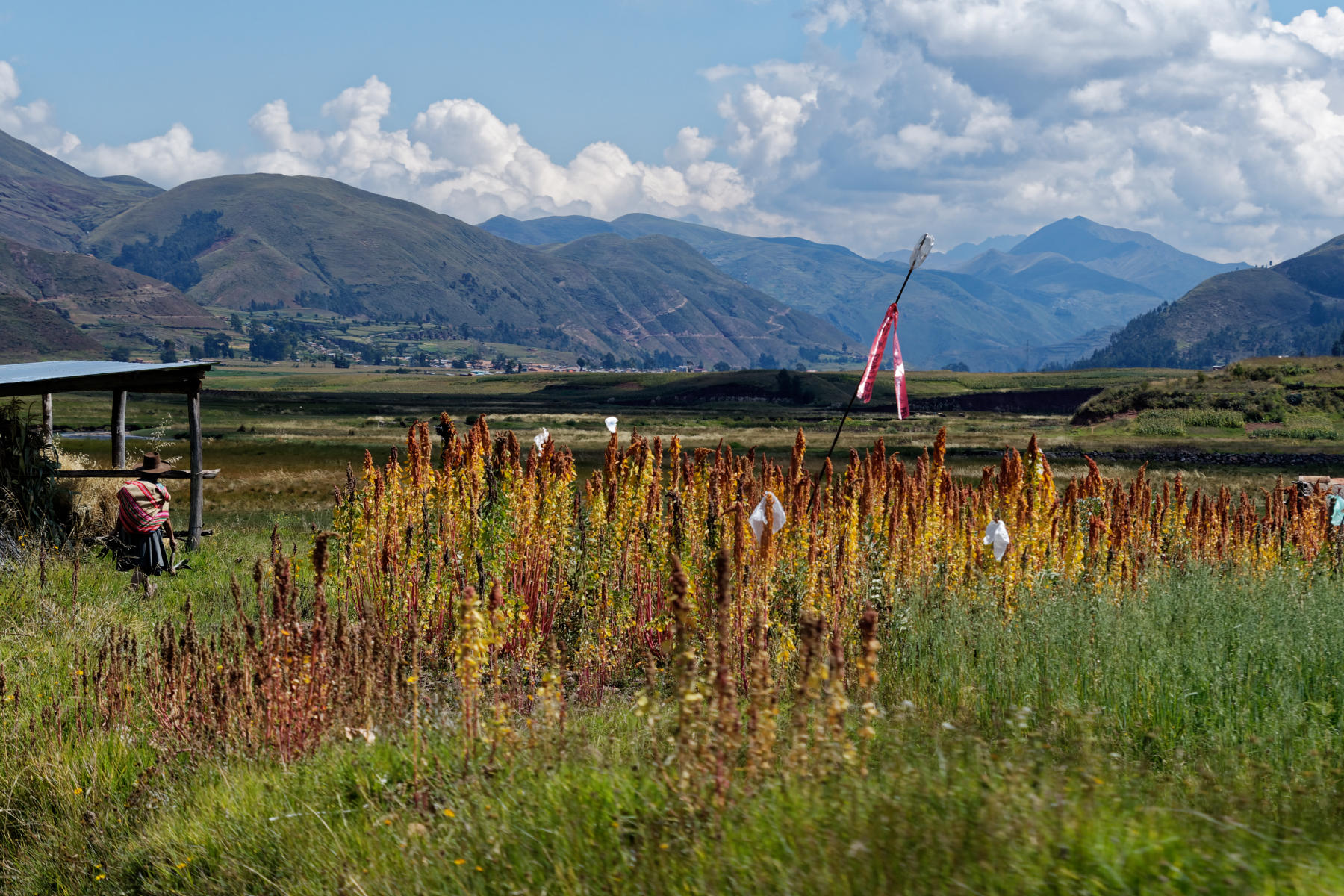 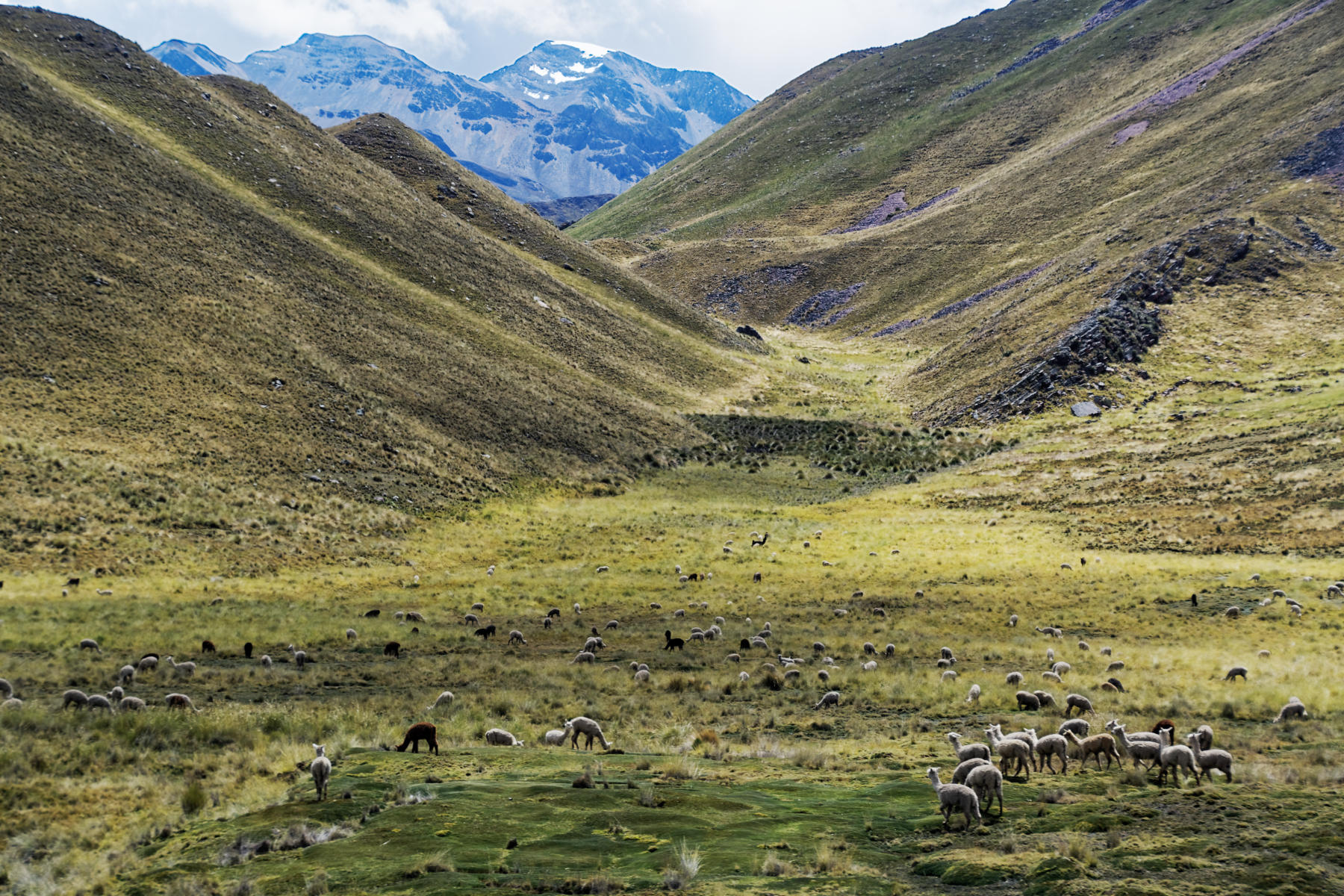 which may well have this as their home. 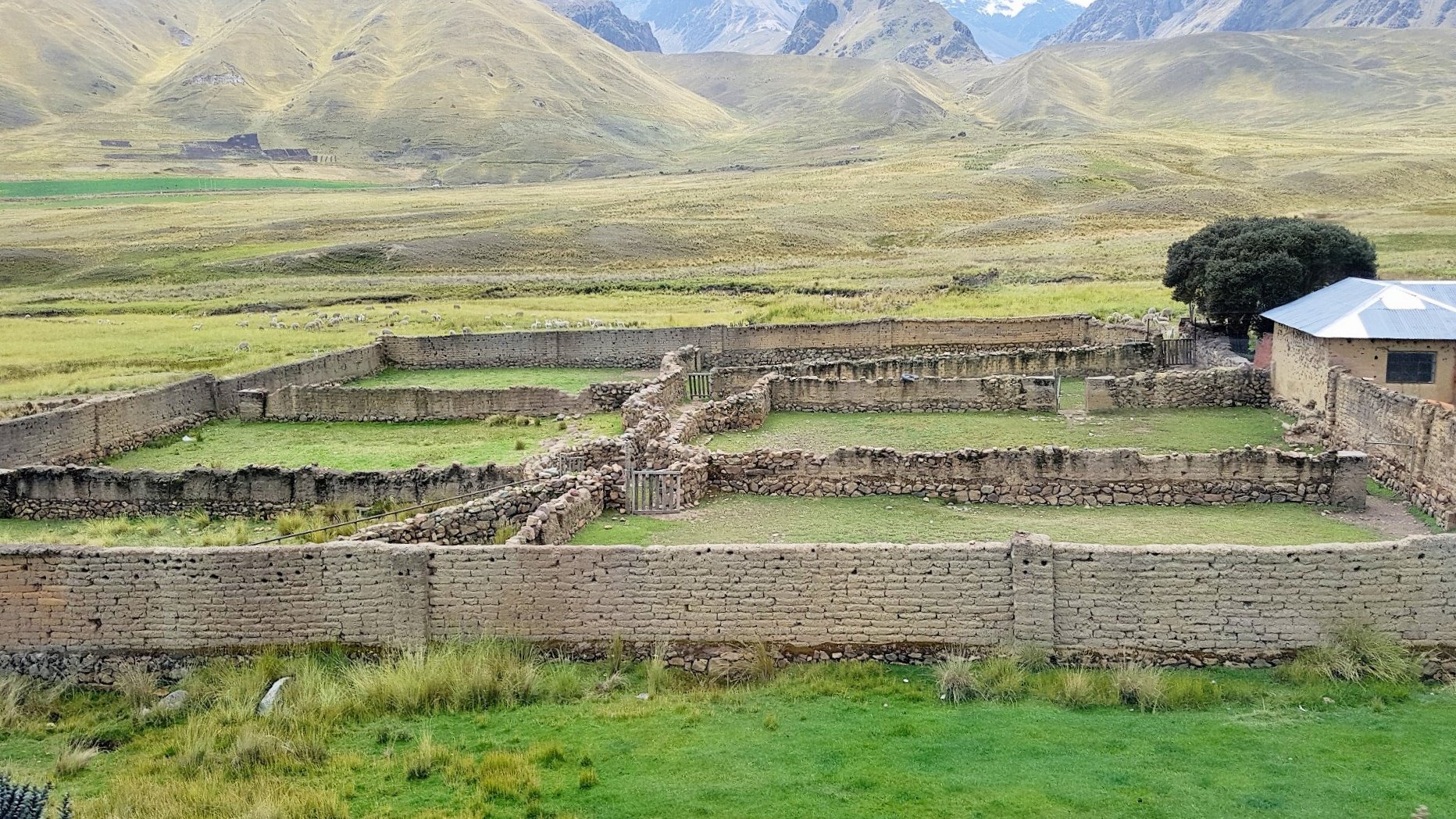 After a short while, the entertainment started in the bar. 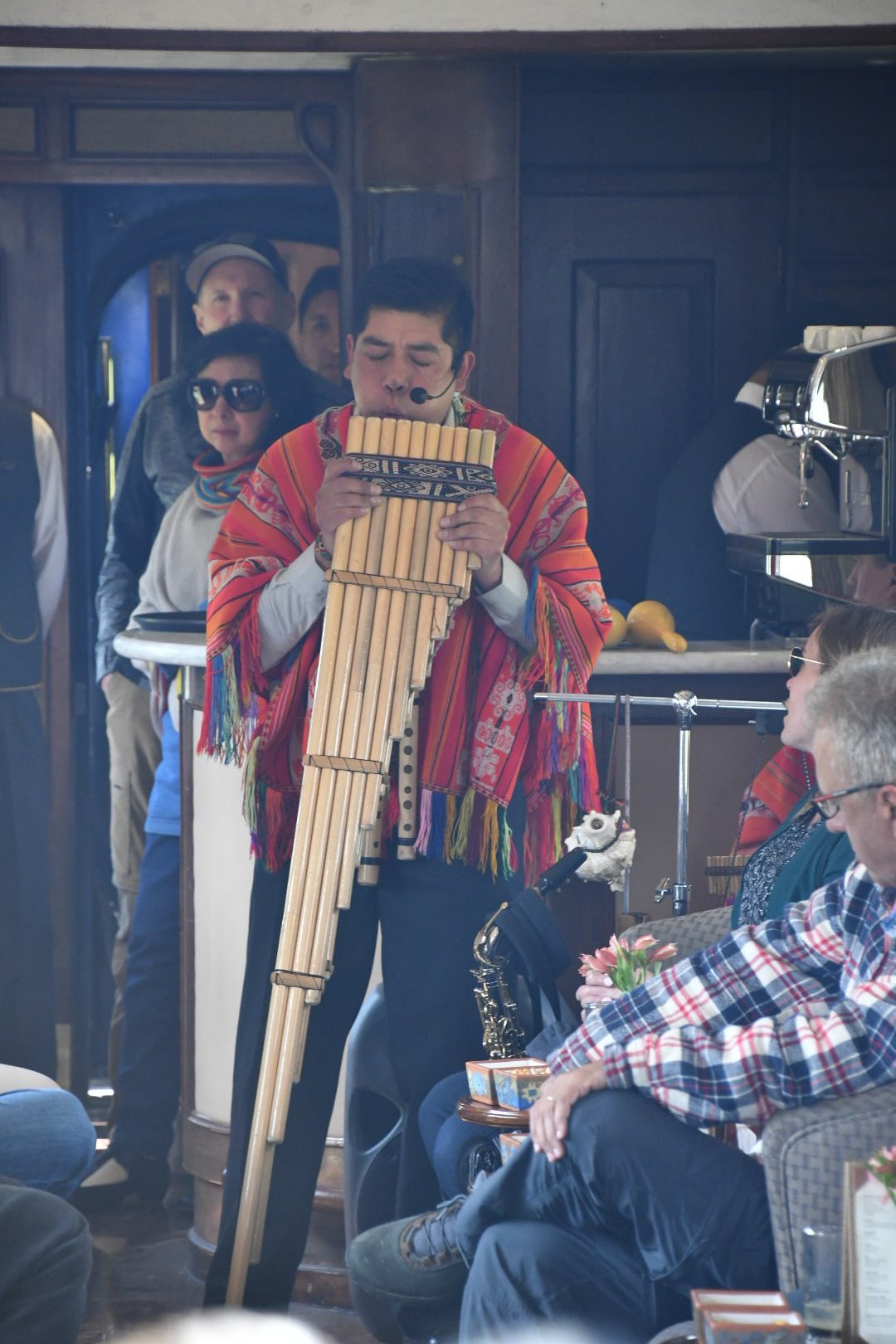 and it became clear that the repertoire of traditional Peruvian music stopped at around El Condor Paso (yes, the tune immortalised by Simon and Garfunkel) and tunes such as Hotel California and Sweet Child of Mine were pressed into service – all with some skill and great verve. There was also a dancer

who had at least one costume change and who also got passengers involved in the fun.

And then it was time for the fashion show. 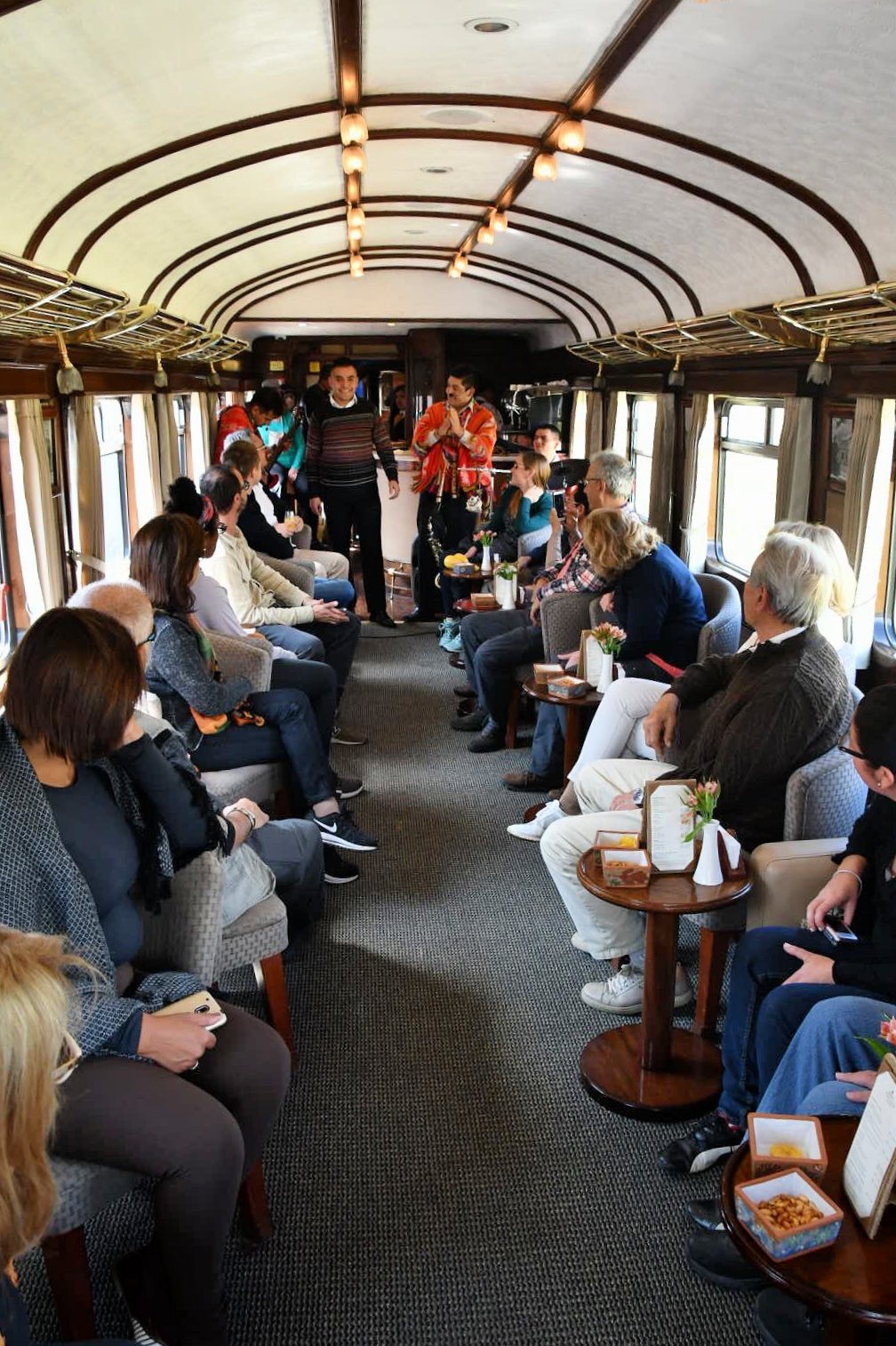 before we had a stop at the highest point, La Raya, where – goodness me! – there was a retail as well as a photo opportunity. My, what a surprise! 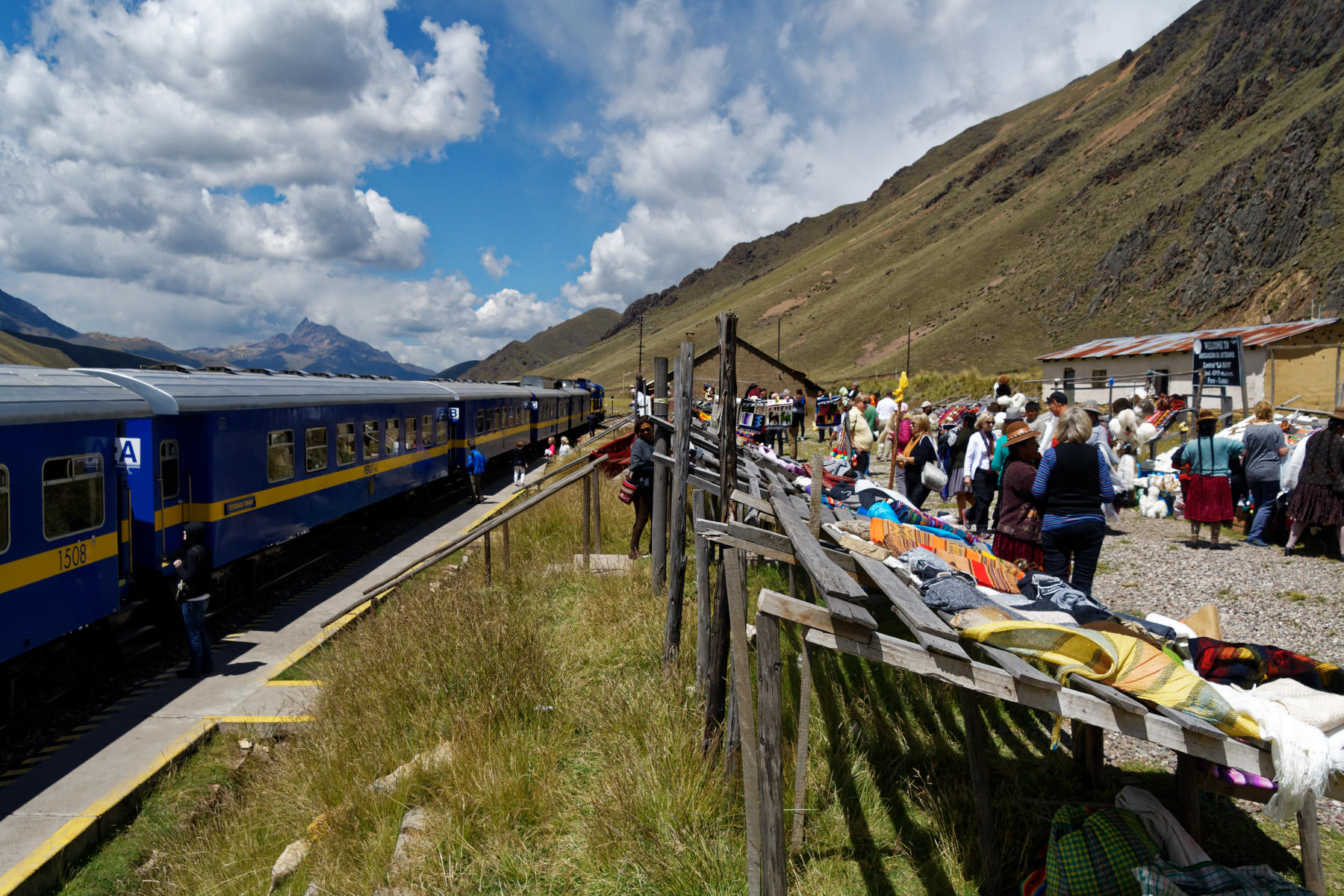 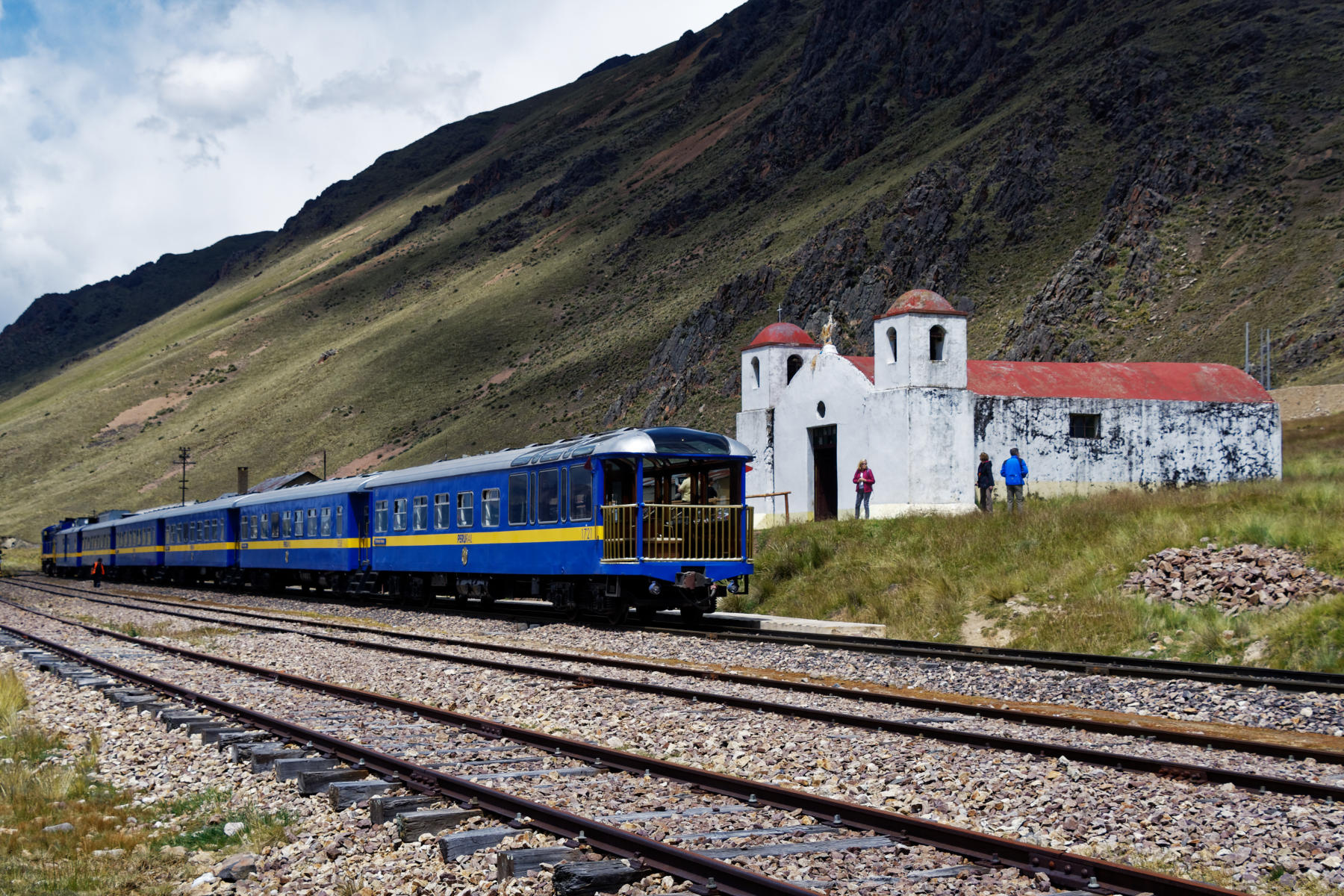 Then lunch was served and we could all settle in to a nice siesta.

The scenery continued, of course 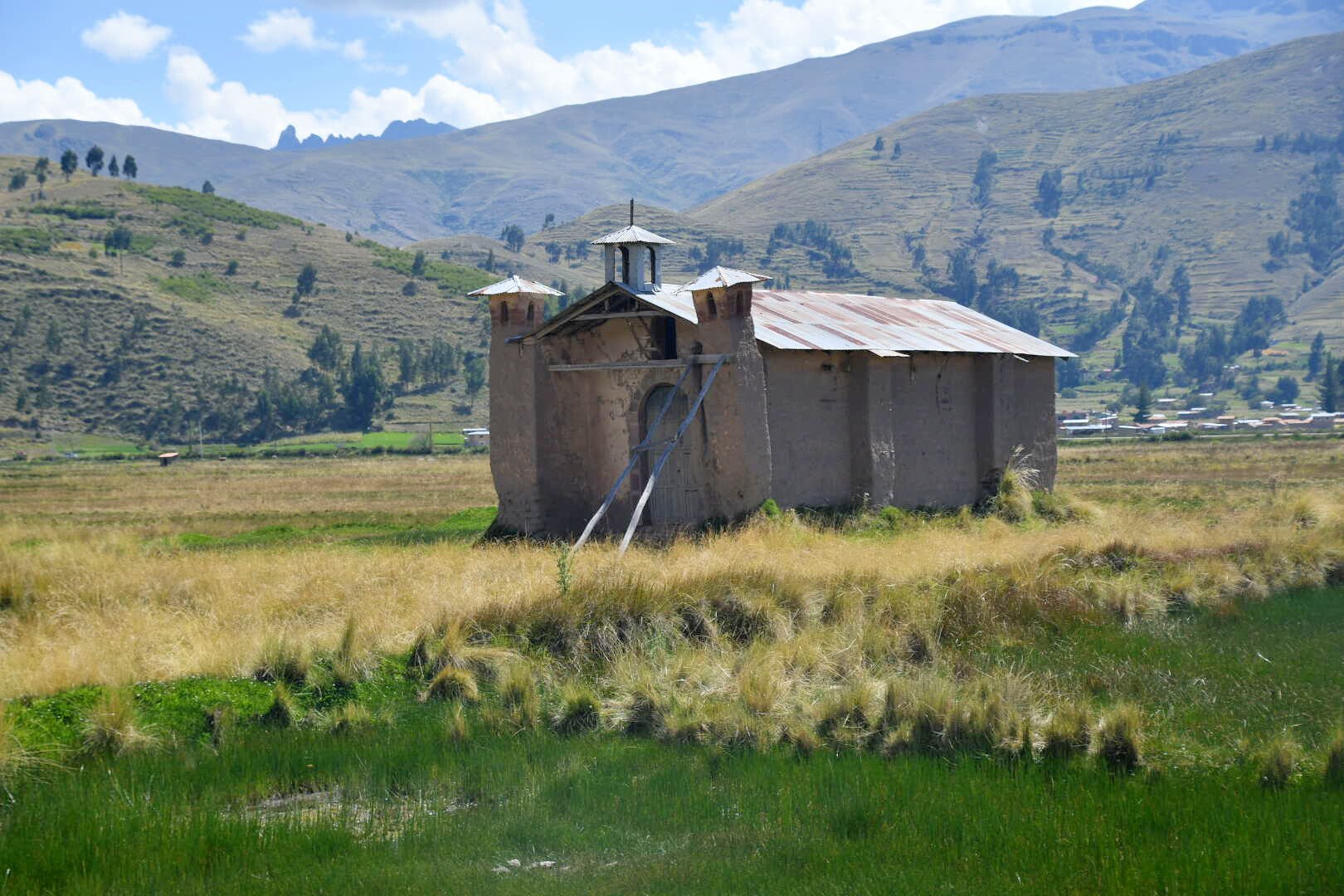 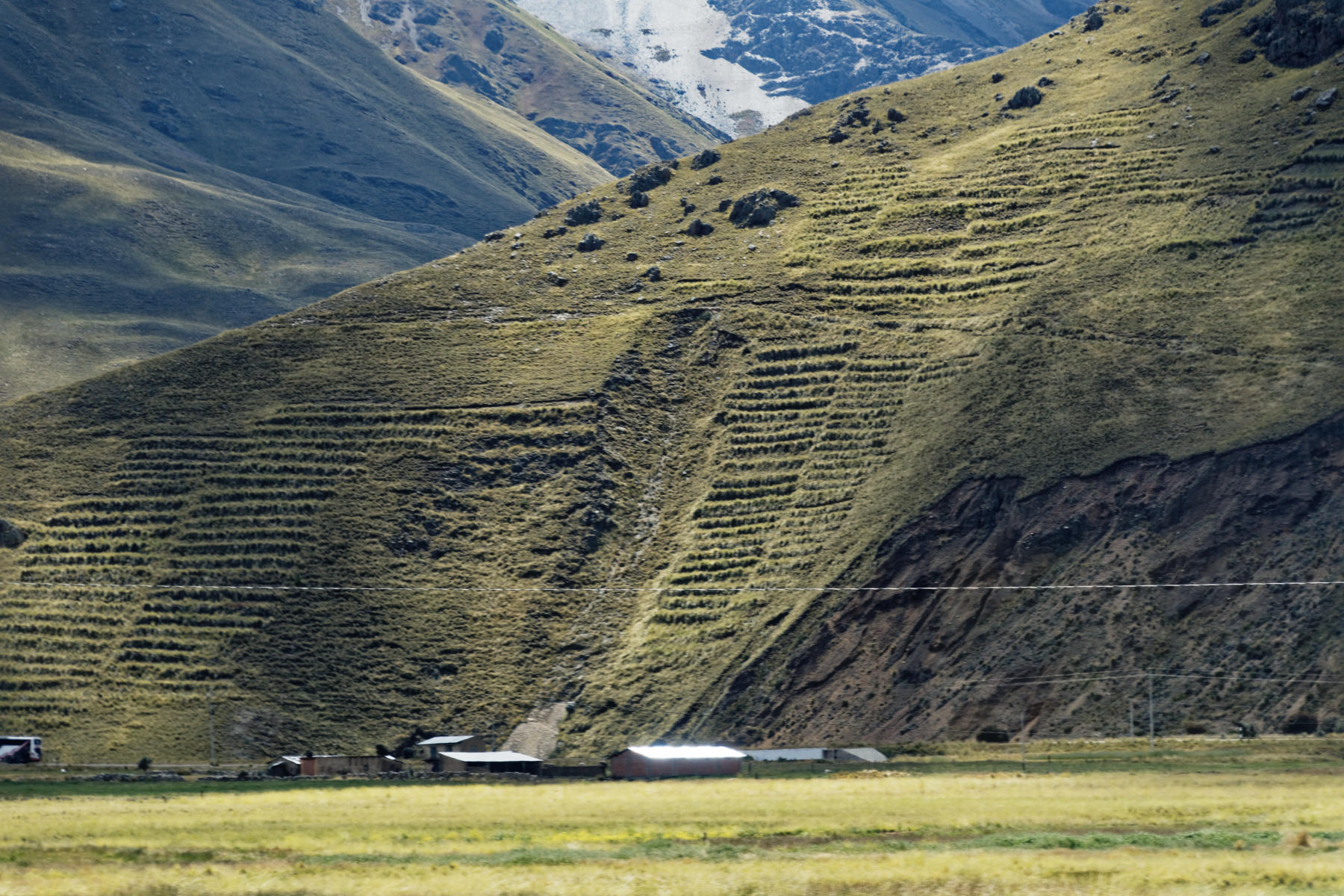 and then we noticed a bit of a change in the landscape, from the absolutely ubiquitous terracing (e.g. above) to stone-walled corrals 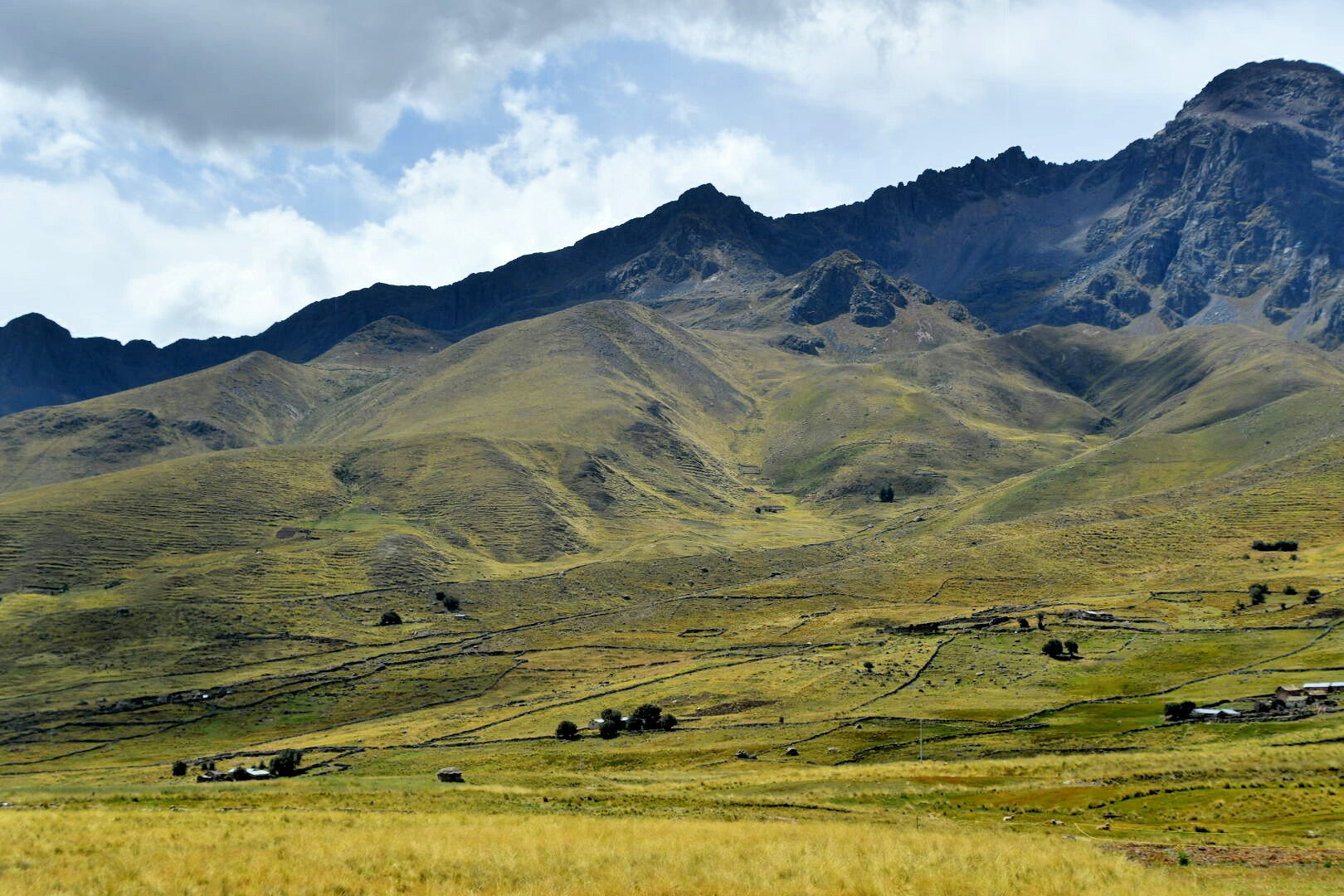 perhaps indicative of a move out of the Inca influence and towards the Titicaca tribes, who it is thought were the first to people the land in Peru, Ecuador and Bolivia. But this was only temporary, and before too long we were back to terracing, so who knows?

As time moved on, the landscape flattened out and we passed all sorts of rural scenes: evidence of oat farming on quite a big scale; 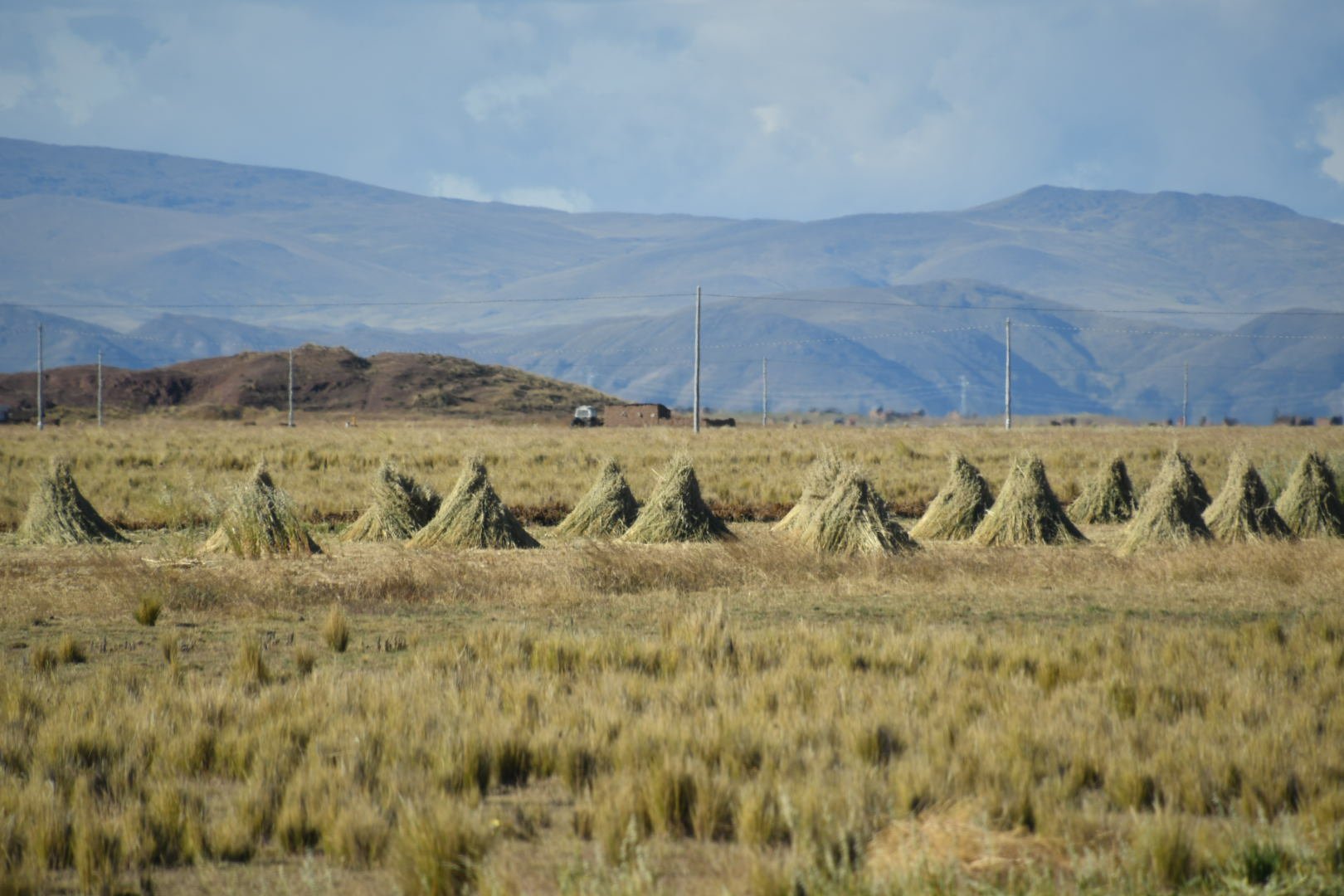 as well as subsistence farming (this is quinoa) 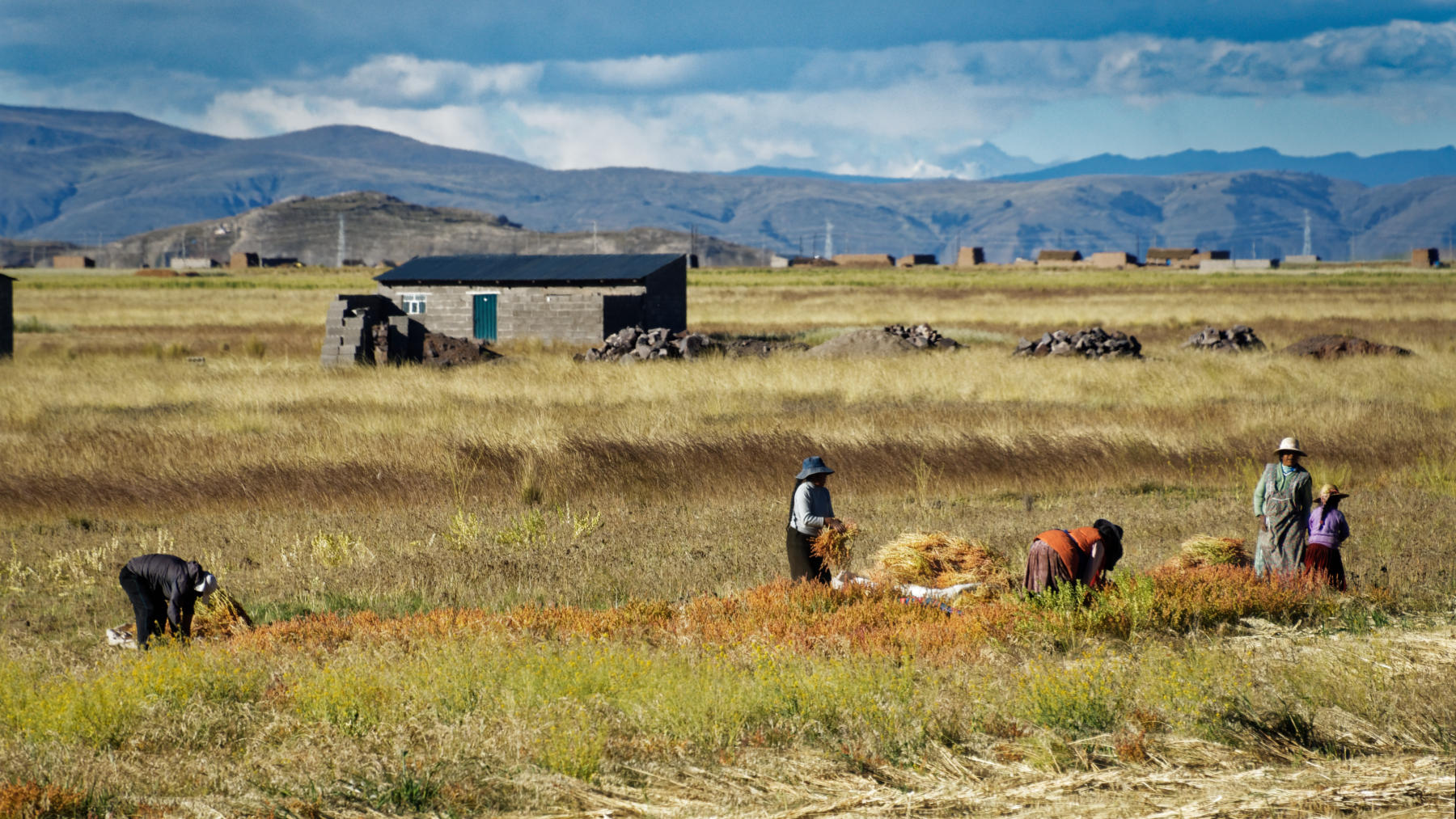 and we’re not sure what this chap was carrying. 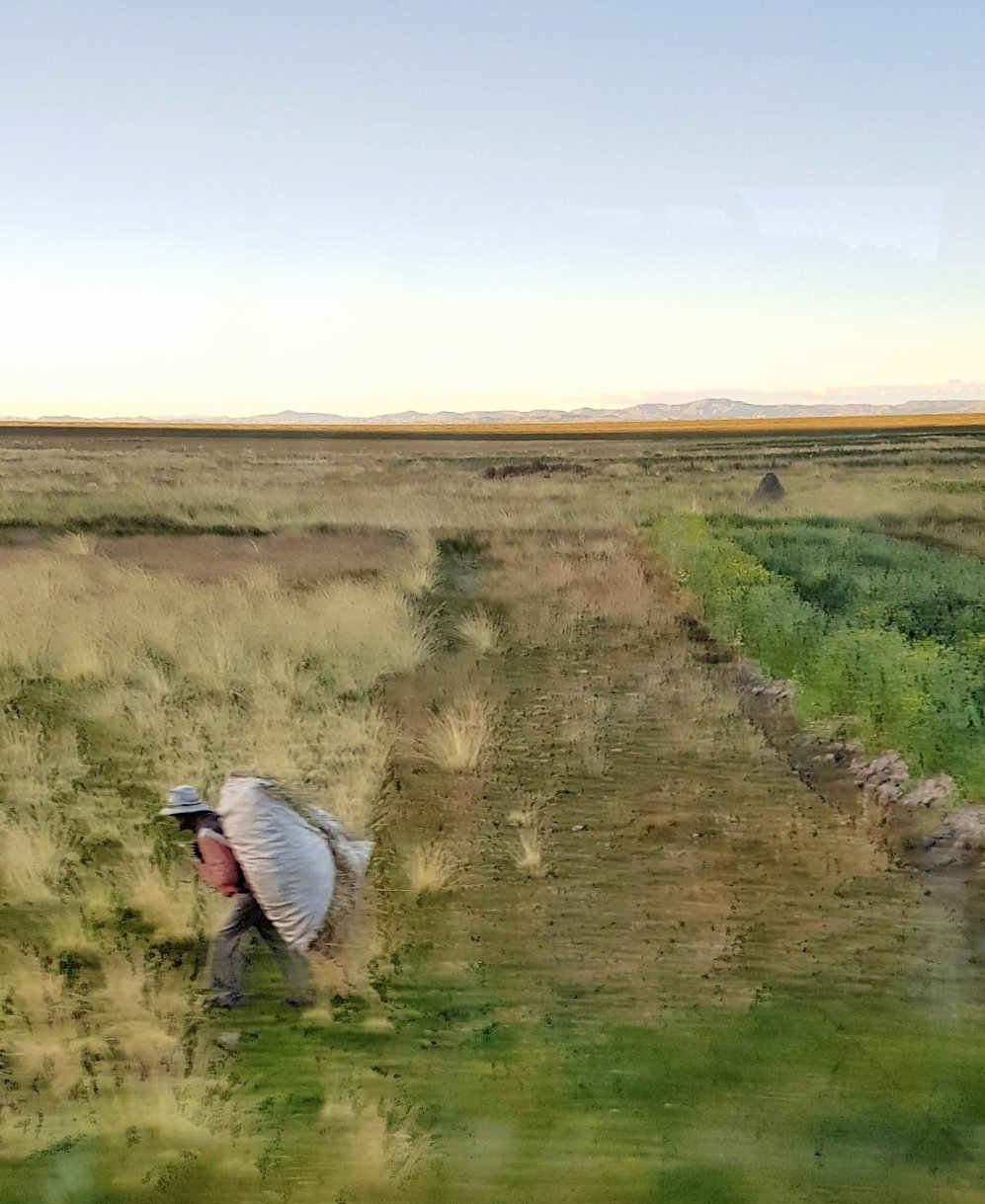 Adobe is a common building material 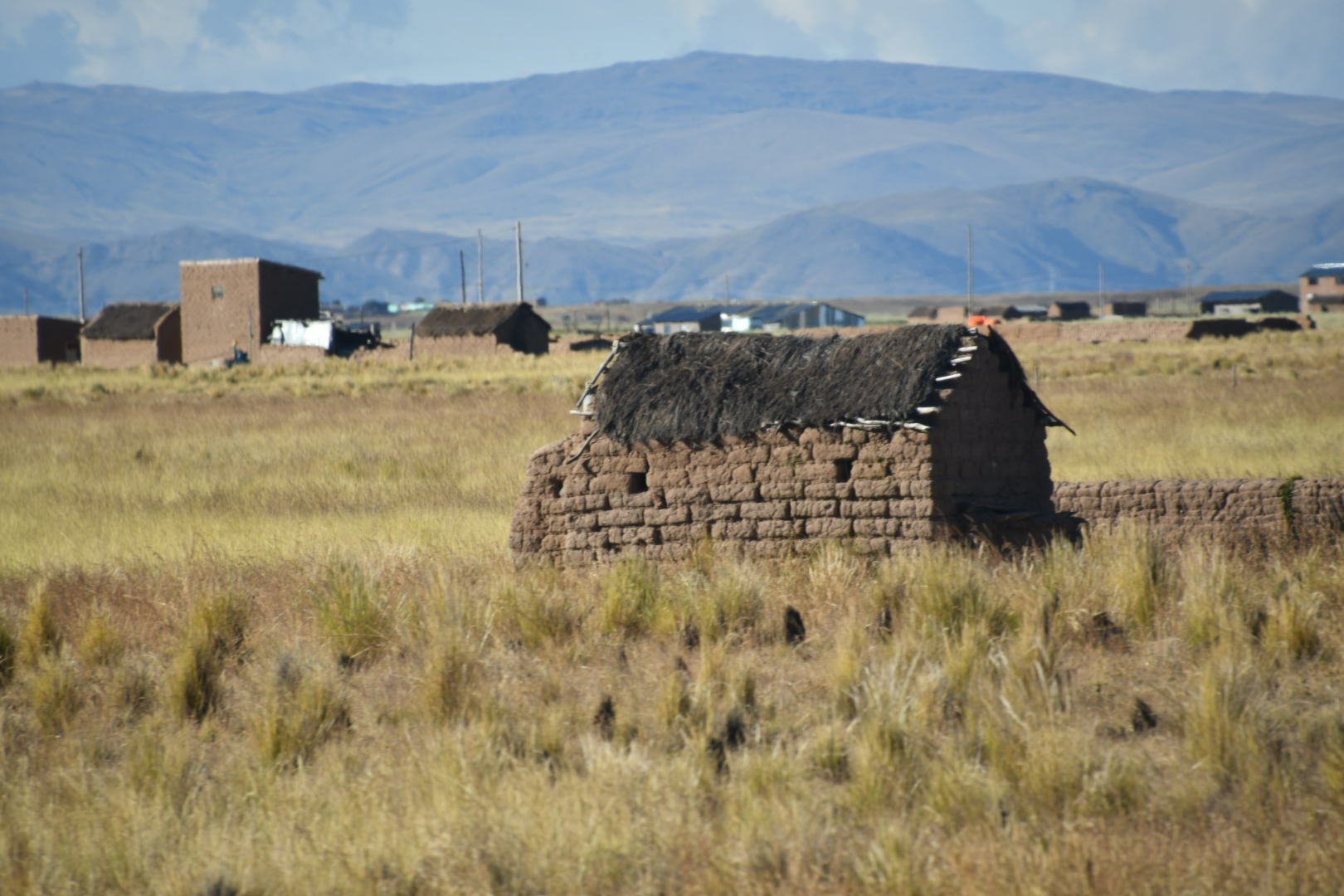 and we even saw a couple of flamingoes, something I had never expected. 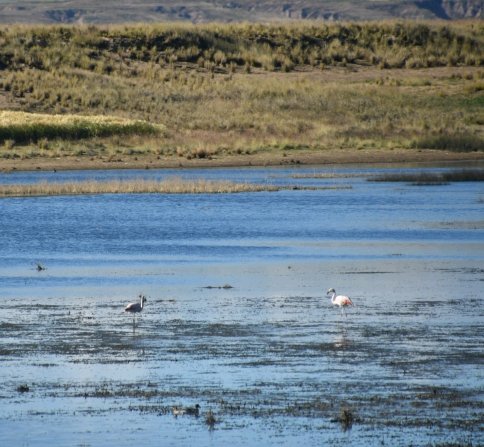 And then….we hit the outskirts of the major town of the area, Juliaca (whence we shall fly en route home in a couple of days). It was, frankly, dispiriting, with a very scruffy industrial area outside the town 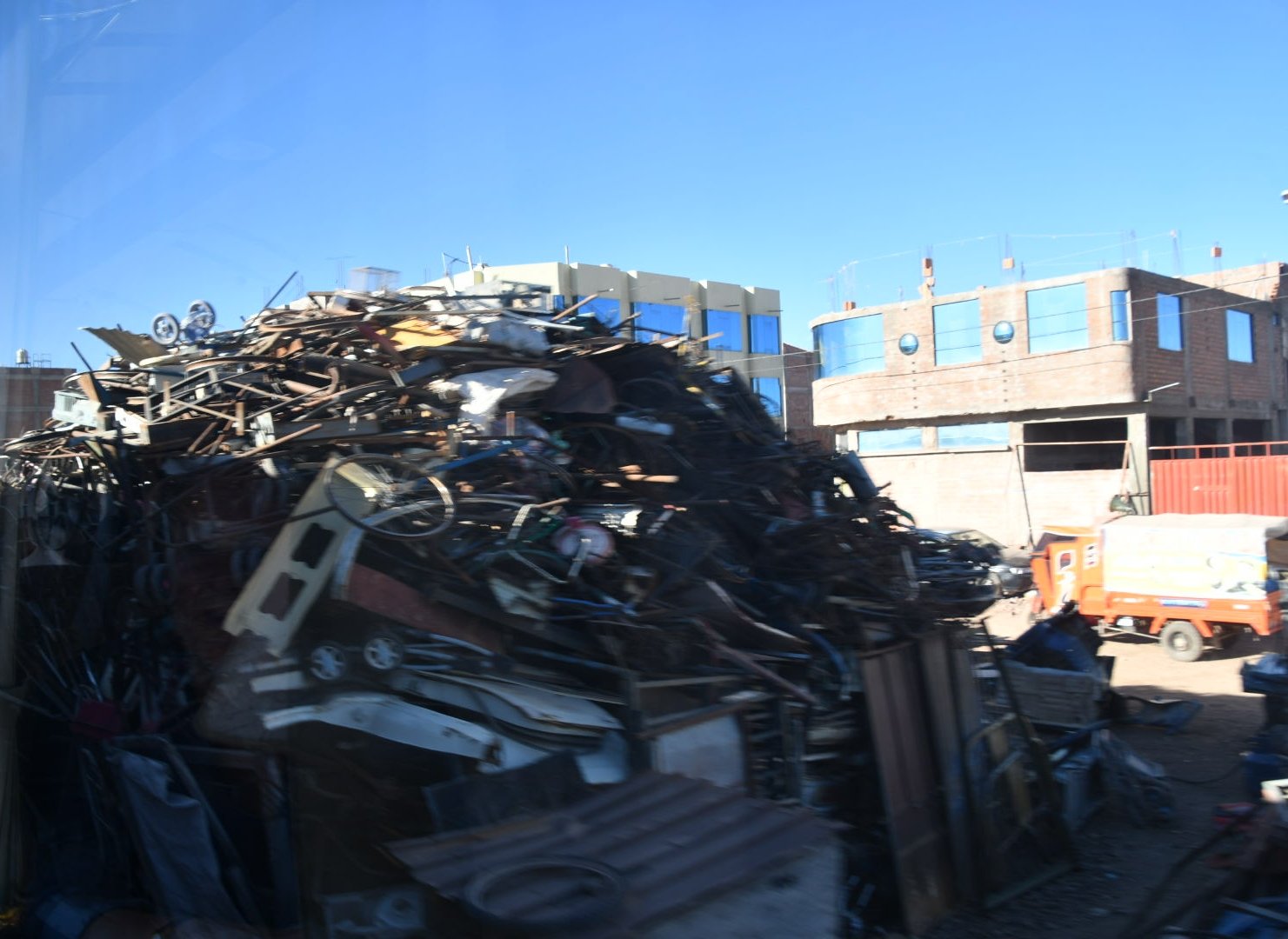 which gave way to an extraordinary scene – a market of sorts, bordering the railway, for what seemed like several kilometres into the town. 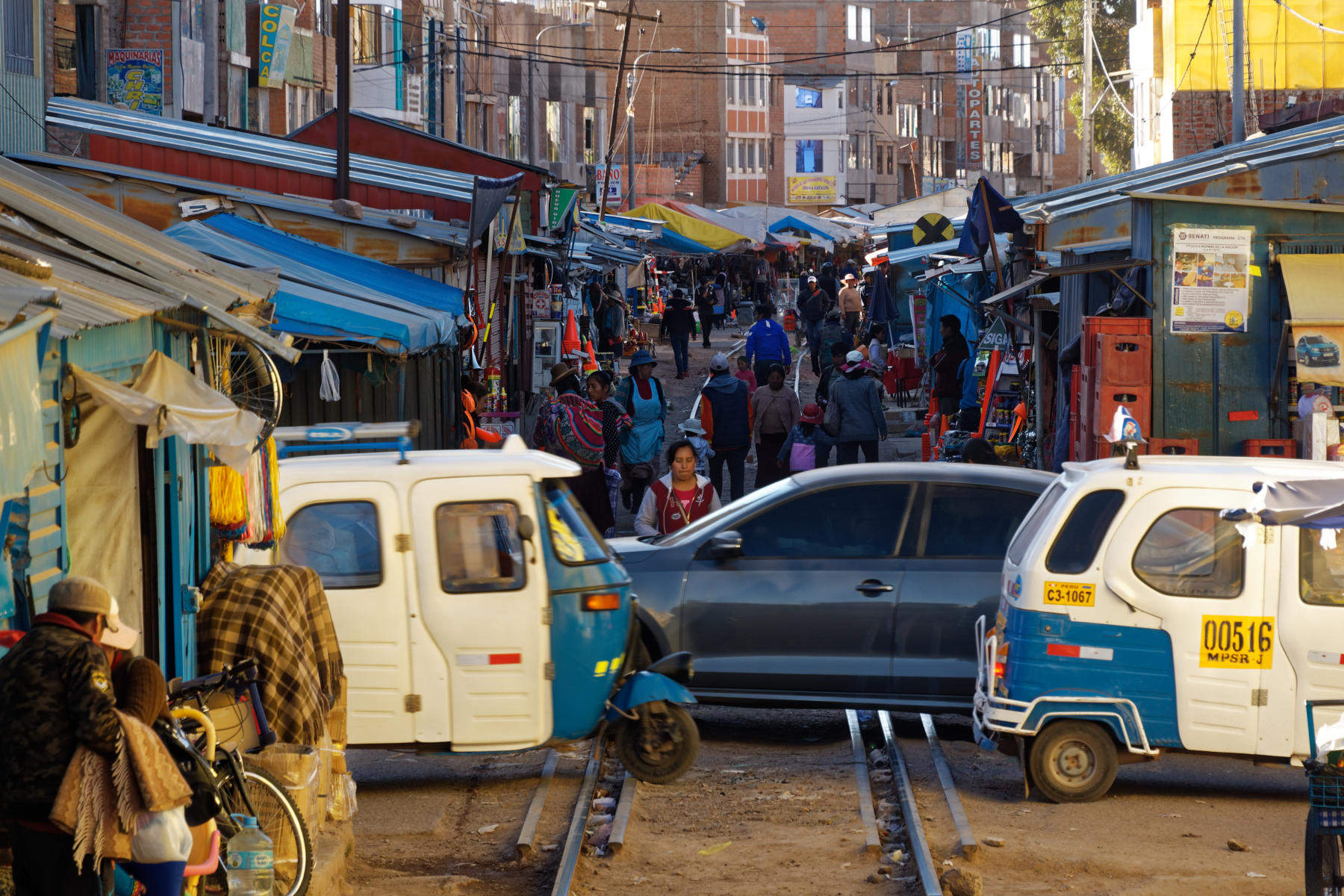 with stalls literally within centimetres of the train as it went by – and even….

…on the track itself! I’ve called it dispiriting, but I guess it’s just how life goes here, and people were calling out cheerily to the train as we went by; they didn’t seem dispirited.

From Juliaca to Puno is flat and uneventful, although you do start to see the incursion of Lake Titicaca as you go along. 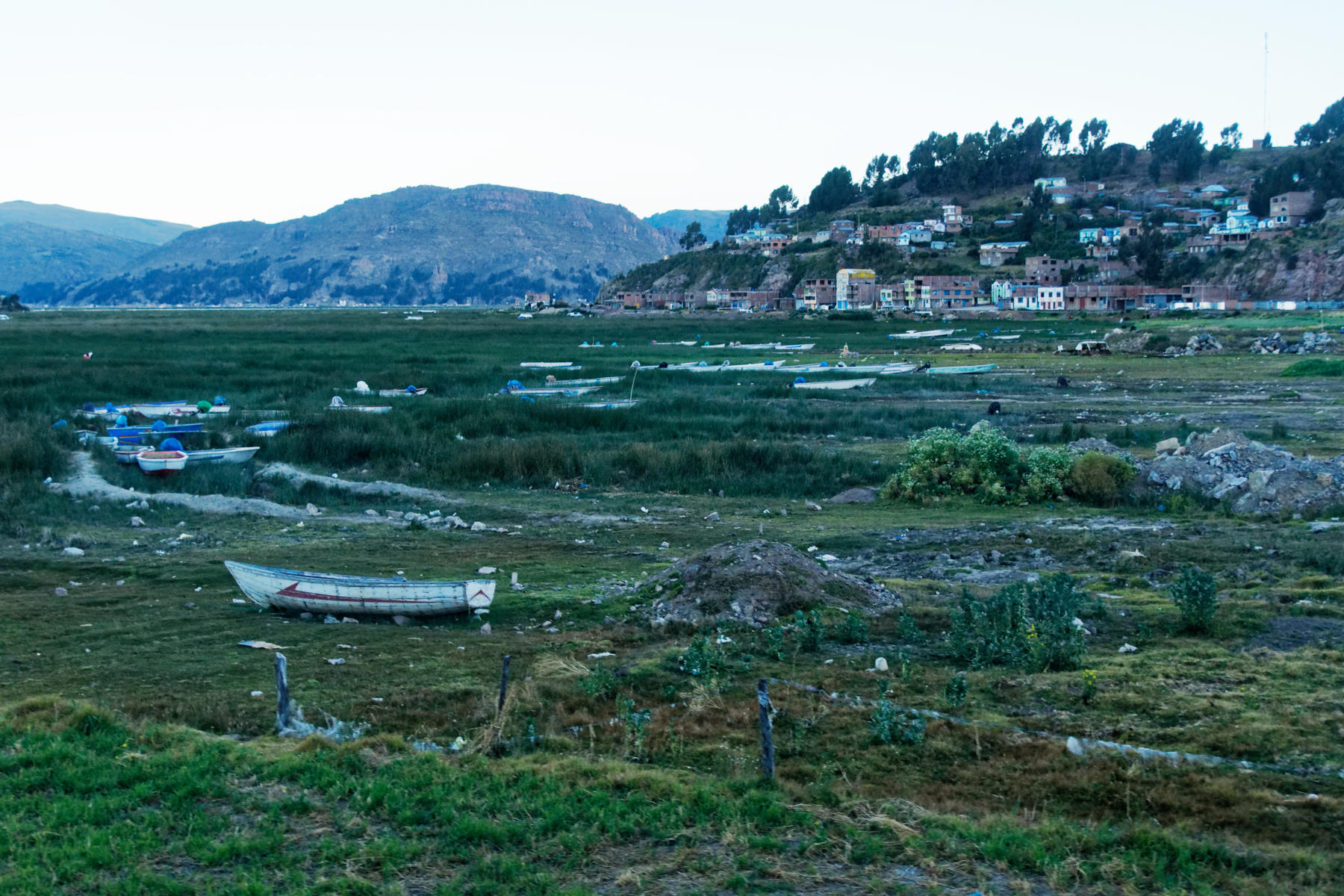 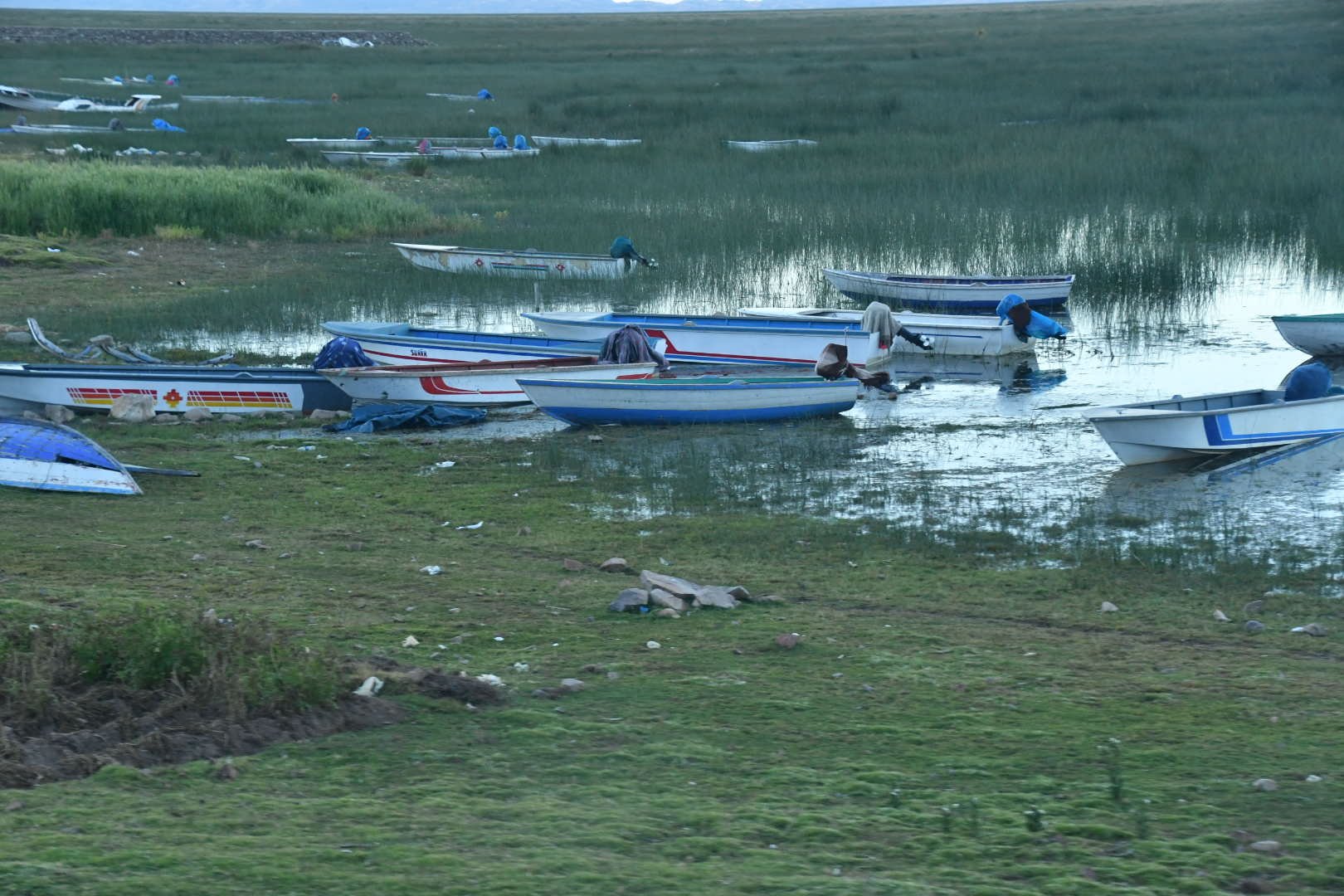 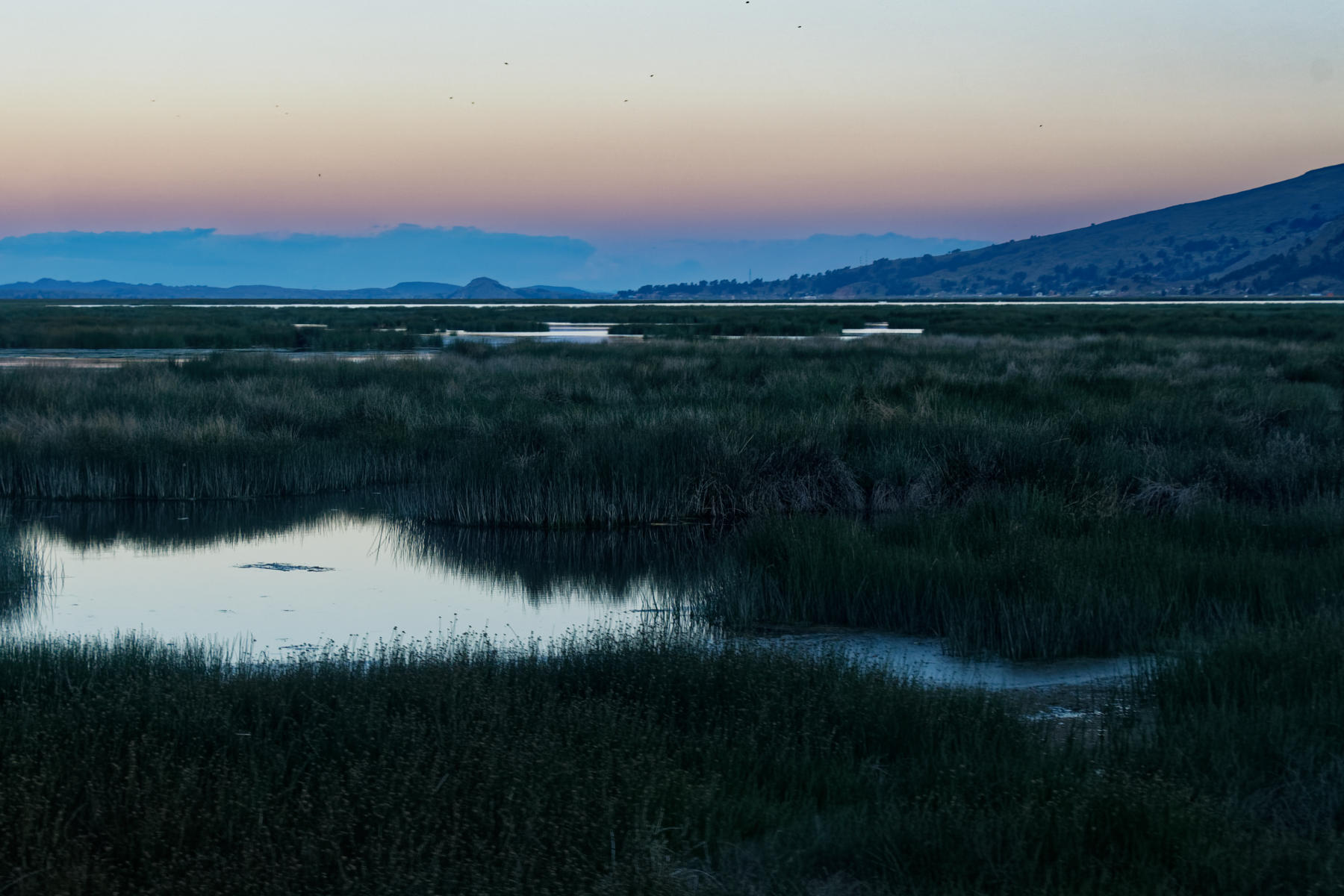 From a brief conversation with a guide, I believe we’ll find out much more about this when we go out on the lake tomorrow. You’ll have to stay tuned to find out, won’t you?