Re-acquainting ourselves with so many barely-remembered experiences: flying from Gatwick Airport; EasyJet flight being on time; the geography of Mahón, the capital; the glorious warmth of a Balearic city in late summer. And new experiences – finding out what we’ve let ourselves in for; and a Talaolitic sandwich inter alia.

So, to recap: my wife, Jane, and I are actually doing what we’d planned to do 12 months ago, having discovered the delights of Menorca, but which had been mullocated by the pandemic: to walk around the outside of the island – 185 kilometres on a trail called the Cami de Cavalls  – the “horse trail”, recognising that one can ride around the island’s periphery. Apparently one can do this on a bicycle these days, though goodness knows why you might actually think this is a good idea.

The first part of such a holiday is, of course, the domestic fluttering about that attends being away for the better part of three weeks: running the food supplies down, figuring out milk orders to ensure we can have a cuppa before leaving and dealing with the uncertainty of going to The Foreign where we don’t necessarily understand the Covid rules. Spain (including the Balearics) is on the UK Amber List, and both Jane and I have had our full complement of injections so far, so the theory is that the pandemic admin for the travel bit of this will be no different actually from our recent trip to Iceland. There’s always the frisson of doubt that it might all go pear-shaped at the last minute in the mix of emotions that attends the complexities of international travel these days.

In the event, everything about the travel went perfectly, with only one exception. Anyone who knows us will clearly understand that a glass of champagne in the departure lounge is an important part of our departure on holiday. To my utter horror, I discovered that Gatwick’s North Terminal doesn’t feature a Caviar House & Prunier bar. The South Terminal would, if it were open, but it isn’t at the moment.  So we simply scheduled a taxi to the airport to give us time for check in and security.

(Note to travellers: there are various maps online of Gatwick’s North Terminal; I can’t find one that reflects reality. As we were heading to our gate, we passed an establishment called “Juniper & co” which would appear to have been able to dispense bubbles had we but known about it; but it’s not shown on any map that I could find online.)

All of the above whinging is the reason that I was not able to share a photograph of fizz on the way out; I apologise to all my social media friends for letting them down. Anyway, we didn’t leave enough time.  The queues in Gatwick were not oppressive, but they were a bit slow-moving, so by the time we’d dropped our bags, gone through security and bought sandwiches for the flight, it was time to head to the gate. The flight itself was, like almost all of them these days, crash-free; we arrived slightly before schedule and were being deposited outside our hotel (from a very posh Merc) some 30 minutes later, which is pretty good. 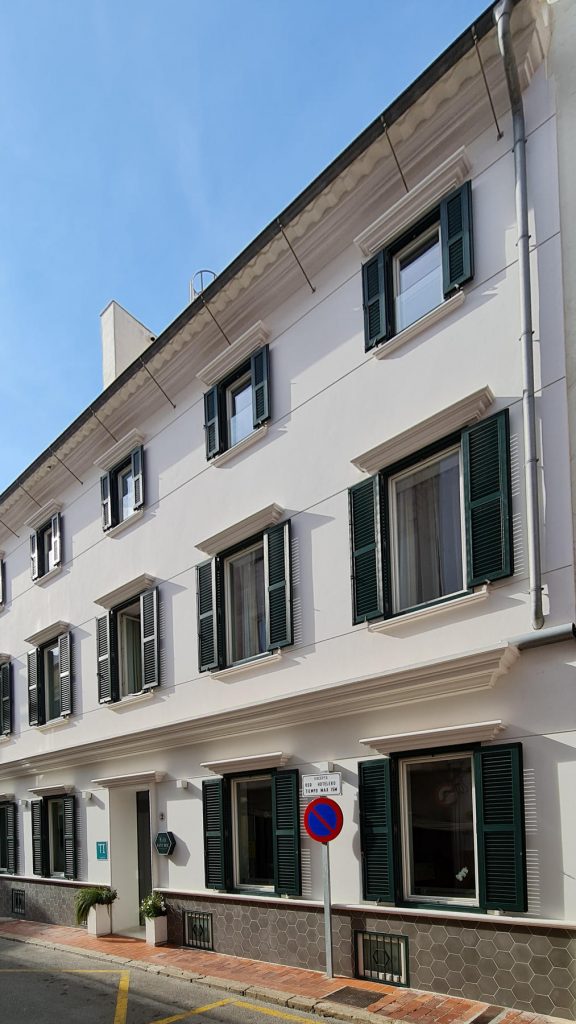 The hotel Sant Roc is a boutique hotel and has some lovely features, which I’ll show later; but the room is not a lot larger than the bed, which doesn’t encourage lazing around. So we headed out fairly pronto to meet the Cami 360 folks who are primarily responsible for directing us as we walk around the island. Their office is in a road called Cala Sant Esteve, which I find mildly amusing. 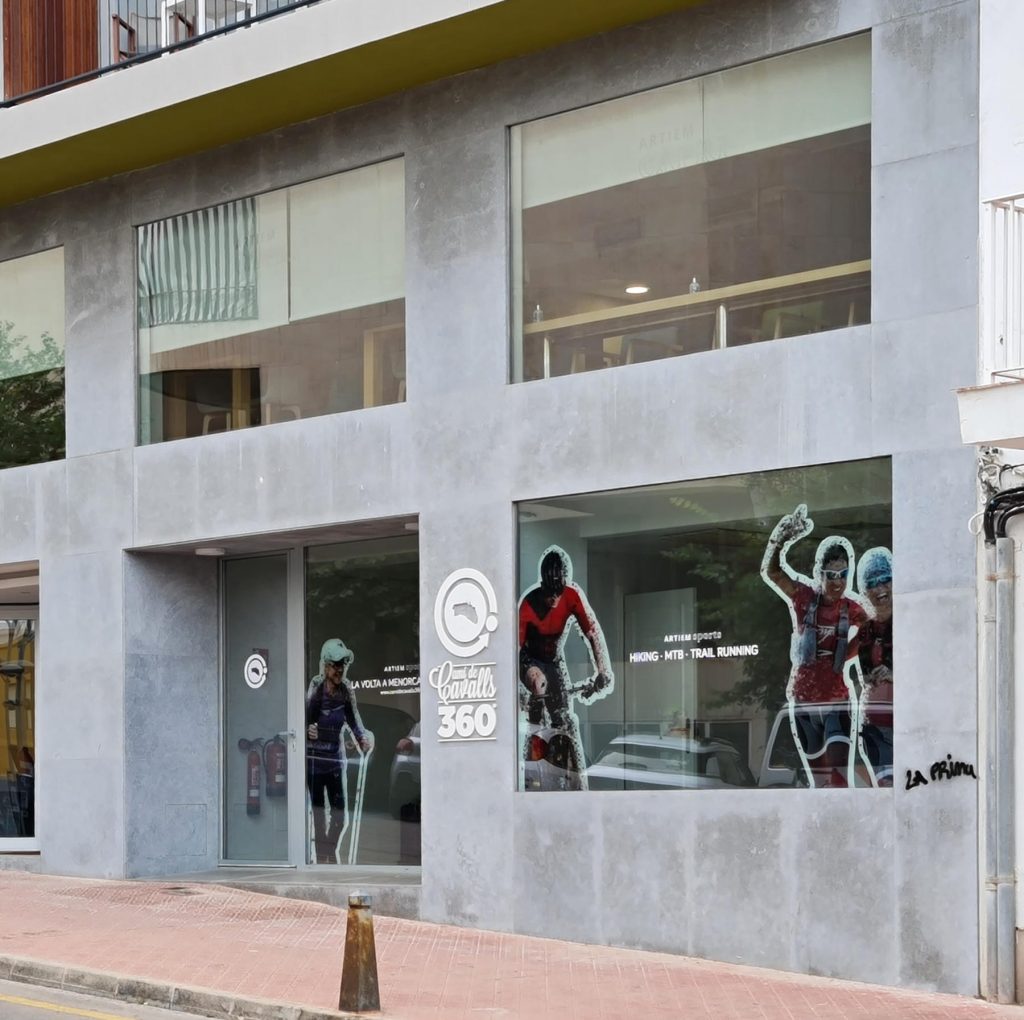 I suppose it’s bleeding obvious if you think about it in any detail, but given that this outfit are co-ordinating multiple groups on their various journeys along a 185km trail, there’s quite a lot of complicated planning that has to be undertaken. We knew in advance that they would take our main baggage from overnight stop to stop for us and that we would stay in various hostelries around the island; but, of course, there’s a lot of picking people up and dropping them off involved. They explained this to us, and for planning purposes we had to make some guesses about how long each section would take us so they knew when we would arrive at pickup points. And that’s when a small dose of reality hit: we are going out in hot weather to walk a long distance and we need people to help us, when we haven’t really got much of a clue as to the details of what’s involved. Happily, the Cami360 folks are used to dealing with this and provided detailed maps, booklets and a WhatsApp group so that we could (a) have a clearer idea of what’s involved from day to day and (b) call for help if all of a sudden our plans changed. It seems a pretty impressive organisation so far: we have some 13 days to find out how good their execution is in the face of bumblers like me.

After this, we headed out for some evening sustenance, and found ourselves seated outside a very buzzy joint which did very basic burgers and such; 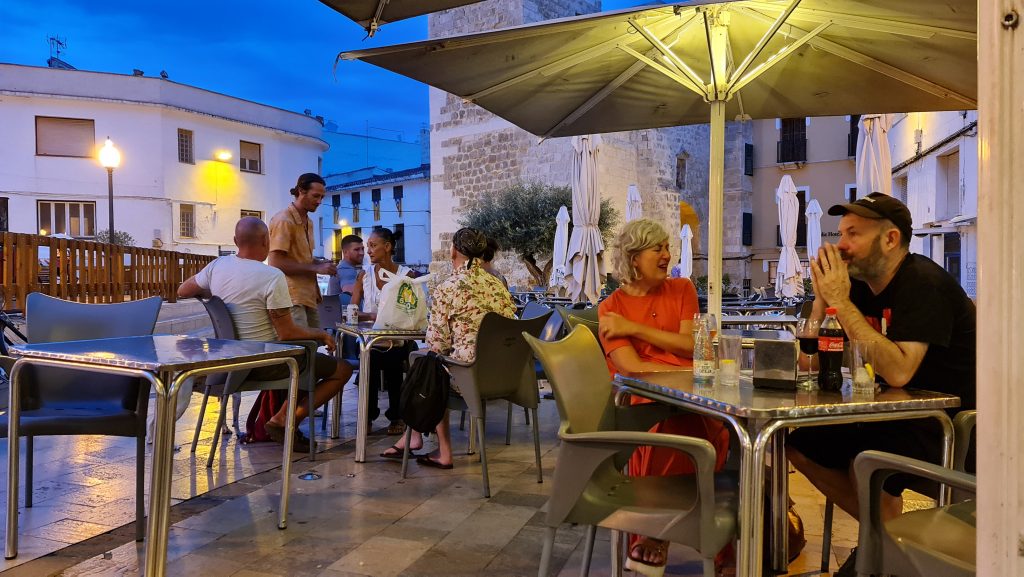 and on the menu was a “Talaolitic Sandwich” (you’ll have to read back on our previous blog to understand the significance of this). Actually it was just a toasted sandwich with spicy sausage, cheese and honey and it was delicious. Not quite sure why it could be associated with the stone age, though.

After such a meal, it was only right that we wander round the town to settle things down a bit, so we walked out along the harbour – one of the largest natural harbours in the world, you’ll remember – and then up to the cliff above to take in the view back, which is quite something. 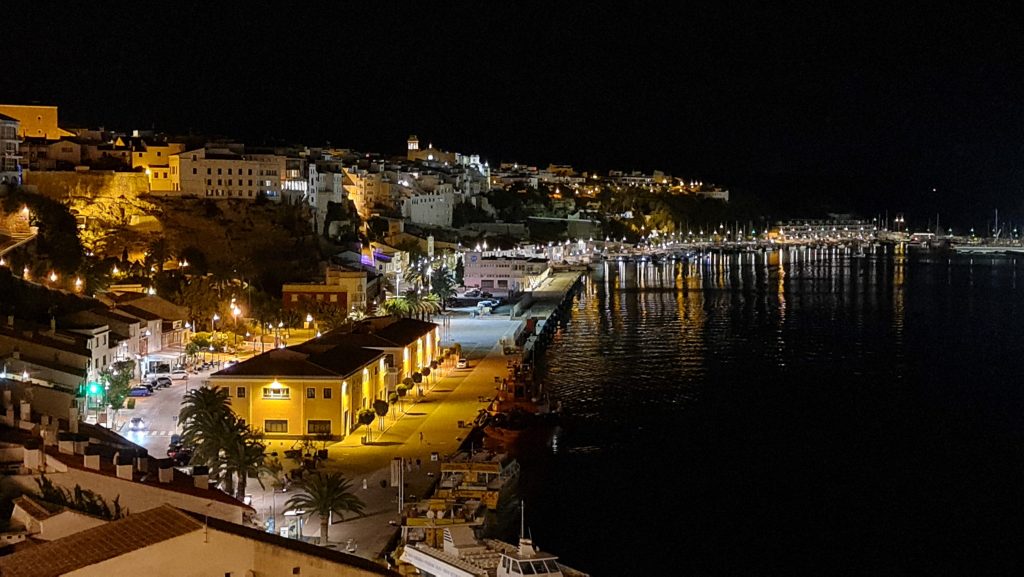 Our hotel is just by the cathedral, and the square outside features several restaurants which gave the place a happy, warm mediterranean buzz. 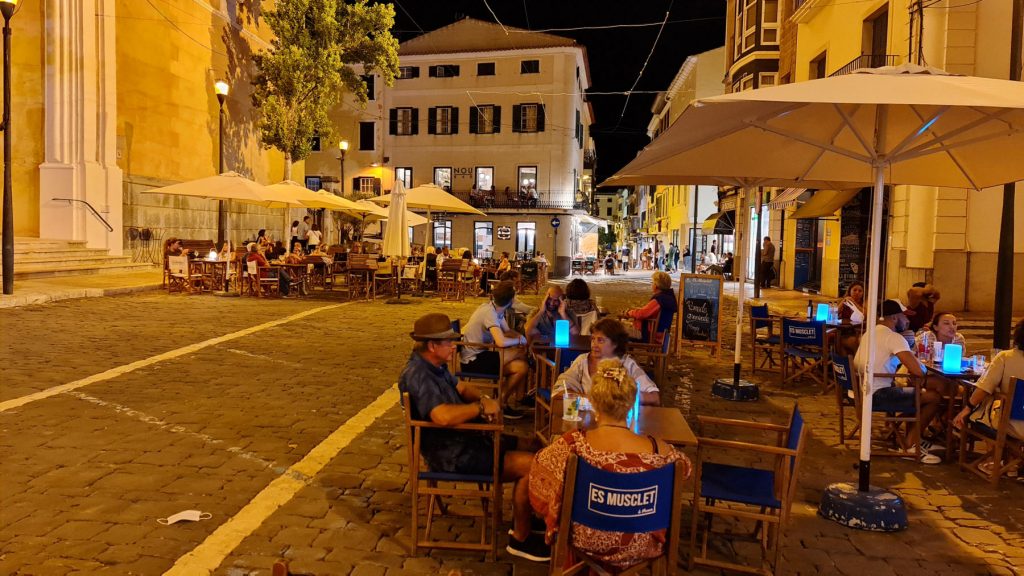 We have a day of leisure in Mahón tomorrow (shopping for essentials such as gin and tonic) before we start the walk proper on Wednesday. Do keep in touch with the blog and you can see how things unfold.