Real life of a sort intruded on our Menorcan recreation project, but in a good way: we needed to get over to see some friends for lunch and so it was part planning and part fortune that today’s route was a short one – some 6 miles – which meant we could leap out after breakfast, get the walk done and then lunch elsewhere, rather than making lunch or other refreshment part of the walk. So we had chosen a nice local walk over Chobham Common, just the other side of the village from us; the original plan had us stopping for a glass of something in the Red Lion in Chobham, but our subsequent lunch plan means that that will have to wait for another day.

First, the all-important weather comparison between here and Menorca.  I may not carry this meme along too much longer, as the story it tells is quite consistent – it’s hotter there than here 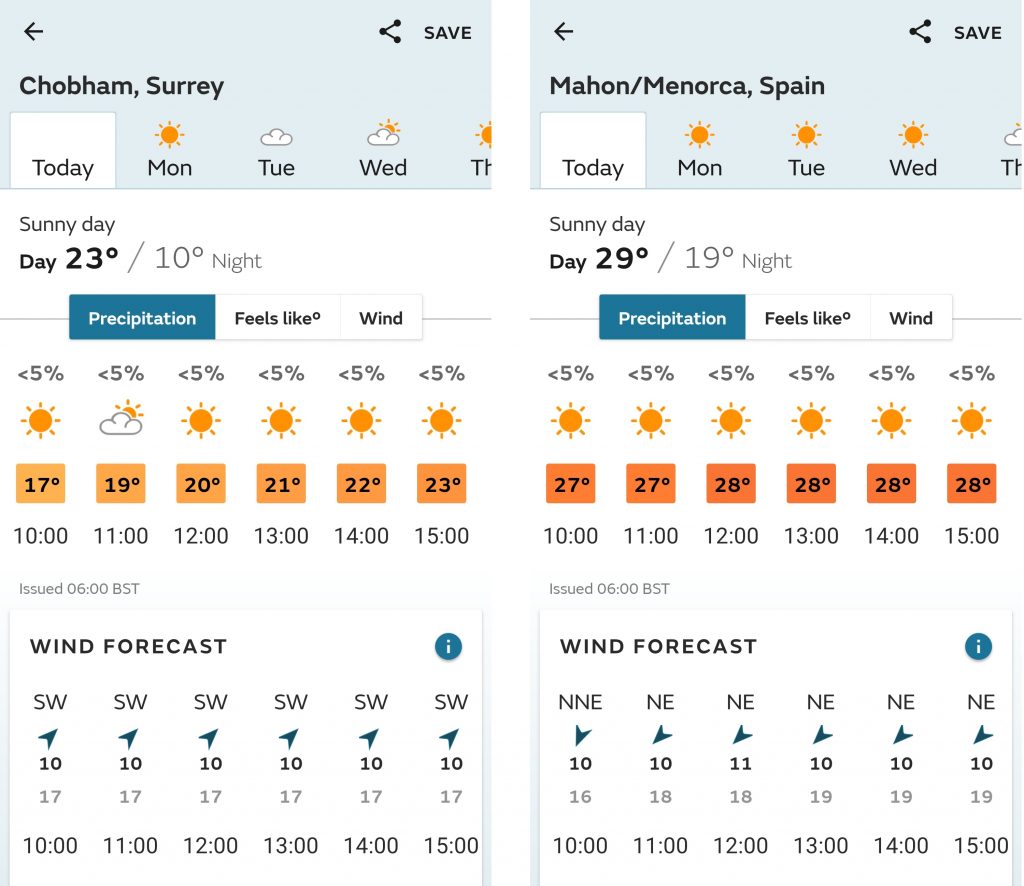 and actually, that’s fine – walking in 20-odd degree temperatures is much nicer than 30-odd degrees.  Whatever, it was a beautiful late Summer/early Autumn morn for our walk.

We’ve lived in these ‘ere parts for nigh on 30 years, and for the first incurious twenty or so we would occasionally treat ourselves to “a walk on the Common”, which we struggled to make longer than five miles before running out of Common to roam across. It gradually became clear that we’d been limiting ourselves to just one part of the common – the part north of the M3 (between Lightwater and the M25 junction). It was only recently that we sought out a route which enabled us to explore the south side of the common, and then it became clear how much larger and more delightful it is than we had realised.

Here’s an outline of today’s walk, 6 and a half miles around the periphery of the south side of the common. The M3 runs across the top in this picture.

As yesterday, the fact that it was a weekend bore heavily on the popularity of the car park. 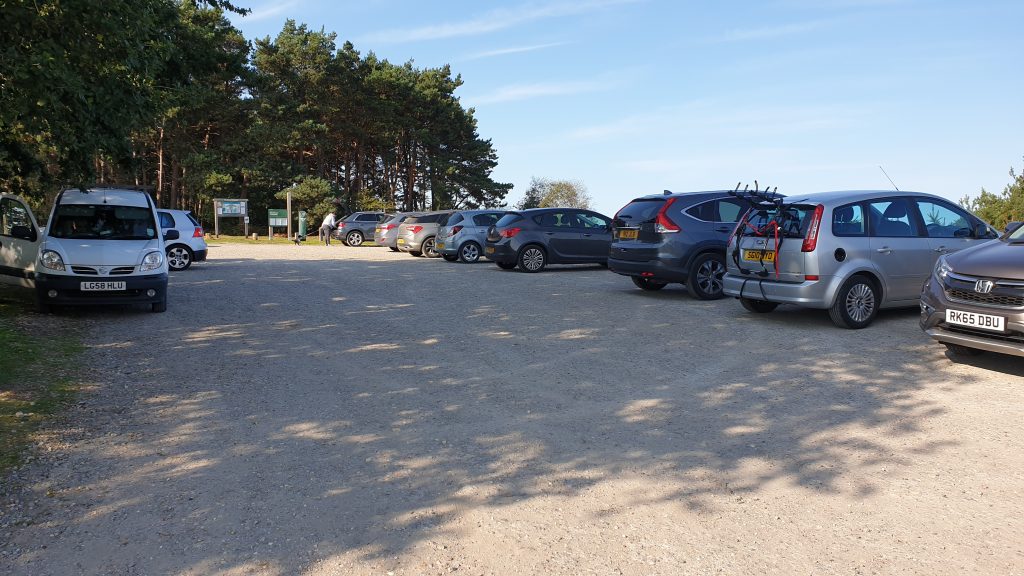 This is despite the efforts of the local council, who have made the entrance quite a tricky thing to negotiate in anything larger than a go-kart. 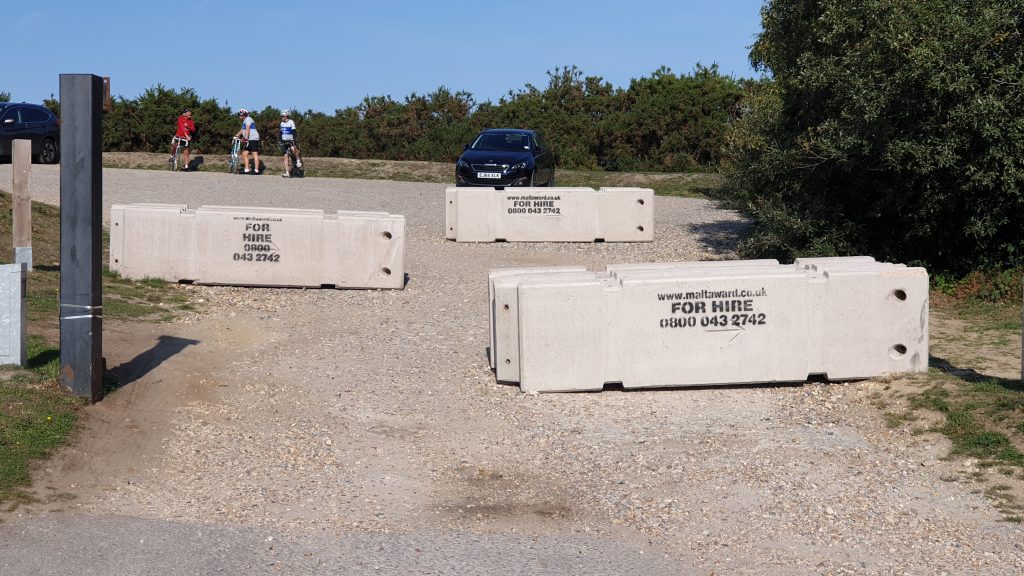 (The blocks were originally set there to close the car park during early lockdown, but I wish they’d moved them a little further apart once this had eased.)

Anyway, once on to the walk, the early parts have scenery similar to the north side which is so familiar to us 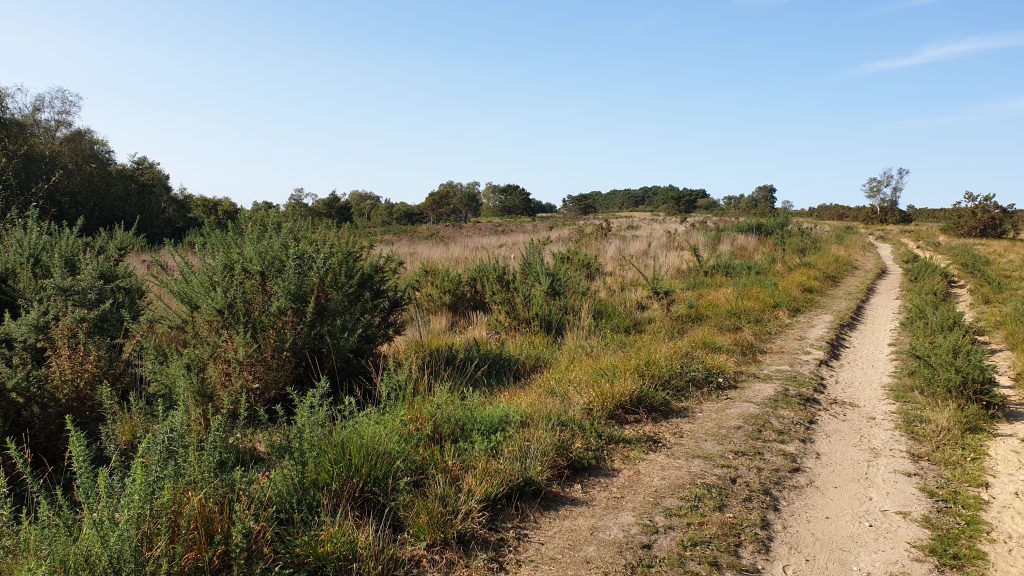 but this soon changes to a different kind of terrain. 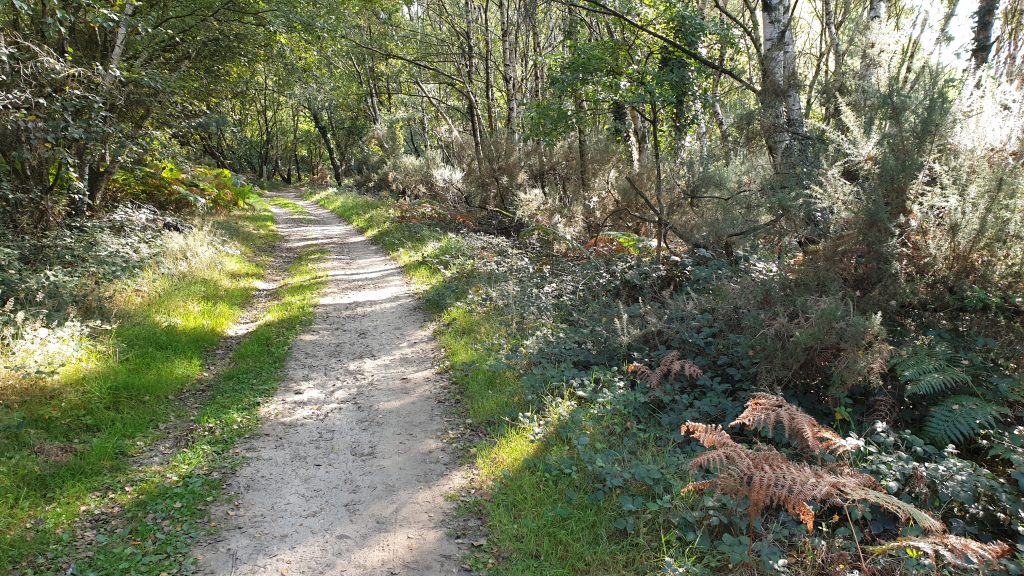 One of the things that marks this walk out is its variety.  Where the north side is largely open heathland, the south side (as you will see if you can bear to keep reading) has a huge variation in surroundings.

A bit further on, the trail heads down and one begins to get some kind of idea how big the south side actually is. 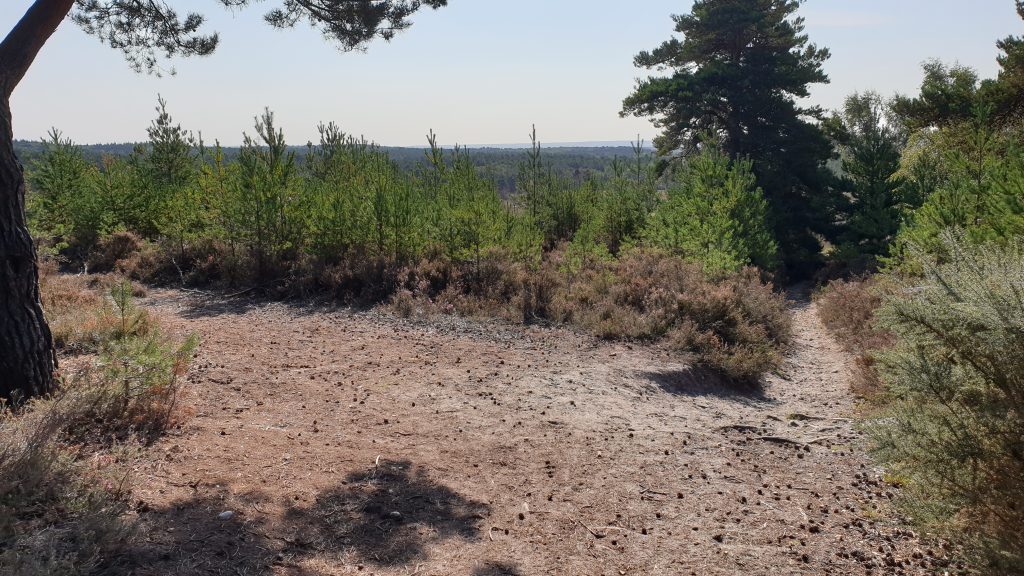 (It’s actually quite difficult to convey in a single photo – but the common stretches from left to right horizons and suddenly seems quite imposing.)  In the distance you can see the latest building efforts going on to drag Woking into the modern age. 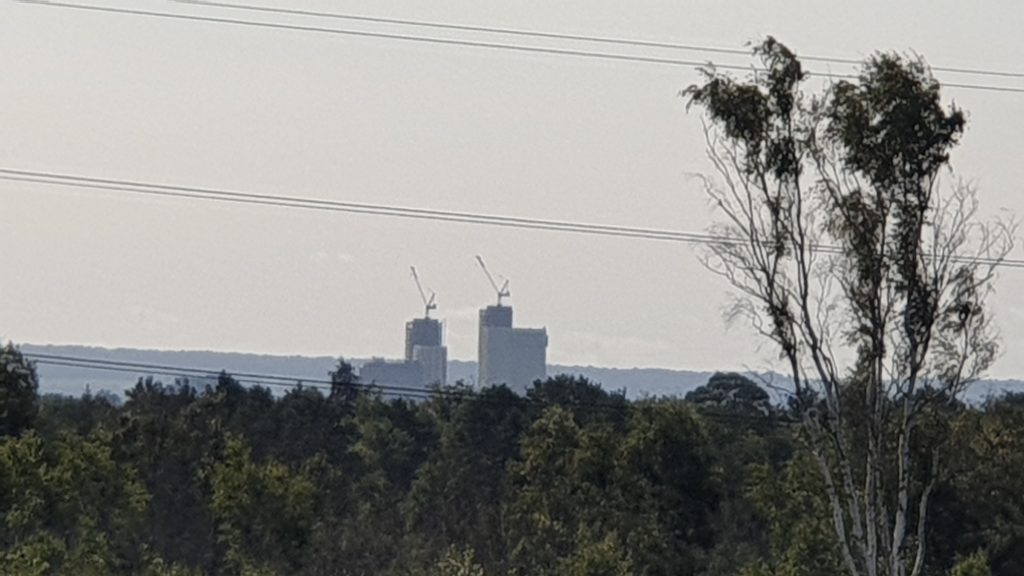 And every so often you can see evidence of the fires the regularly sweep the common in summer.  Here you can see that regrowth is under way. 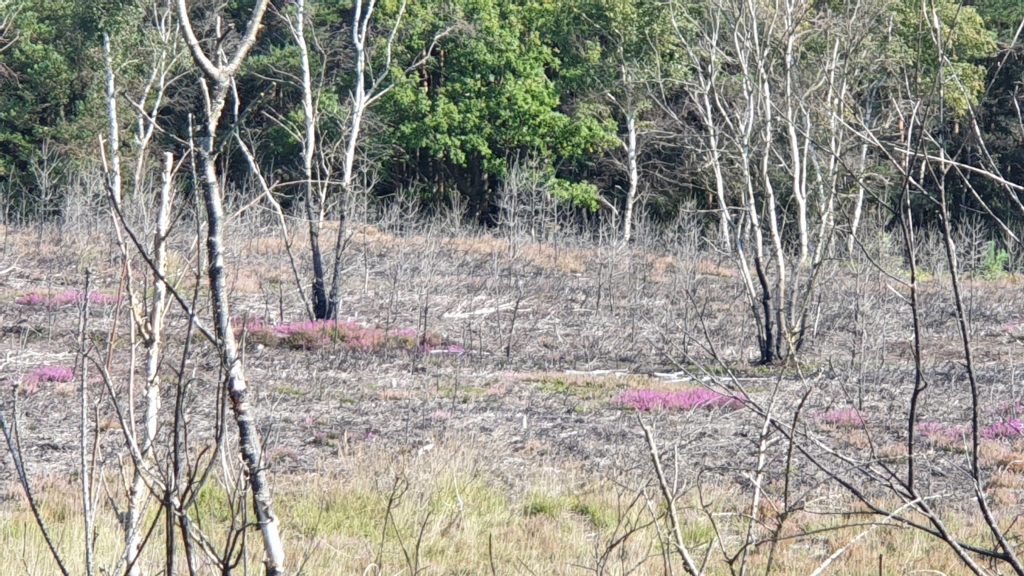 (Fires on the common are regular occurrences, but the north side was badly hit by a huge fire in summer 2020 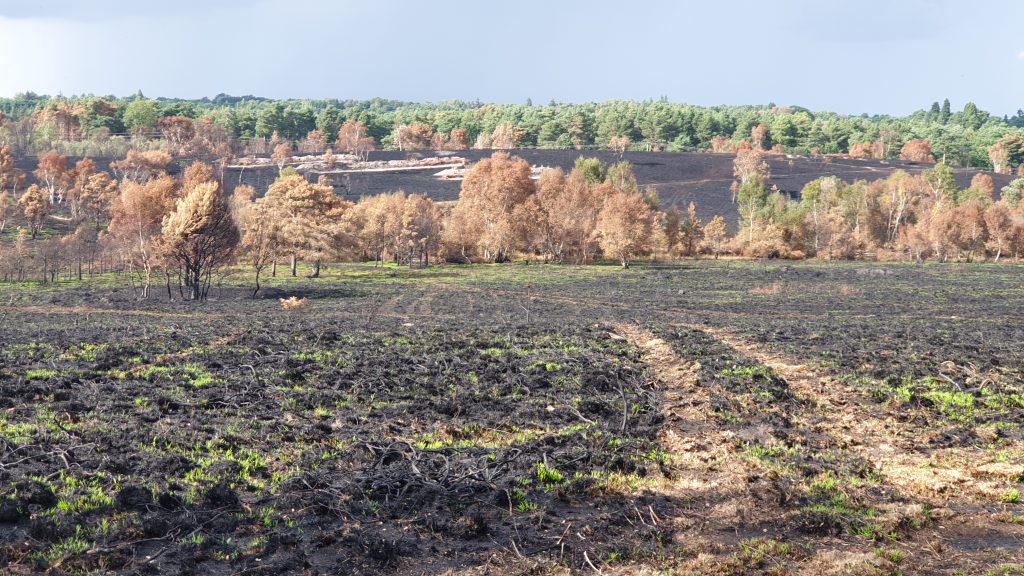 and here you can see the demarcation line where the fire services stopped it in its tracks.)

Sorry, back to the mainstream of today’s symposium.  The trail leads by the fringes of Gracious Pond, once (up to the 1800s) a 50-acre pond, but now drained and a closed sanctuary and nature reserve 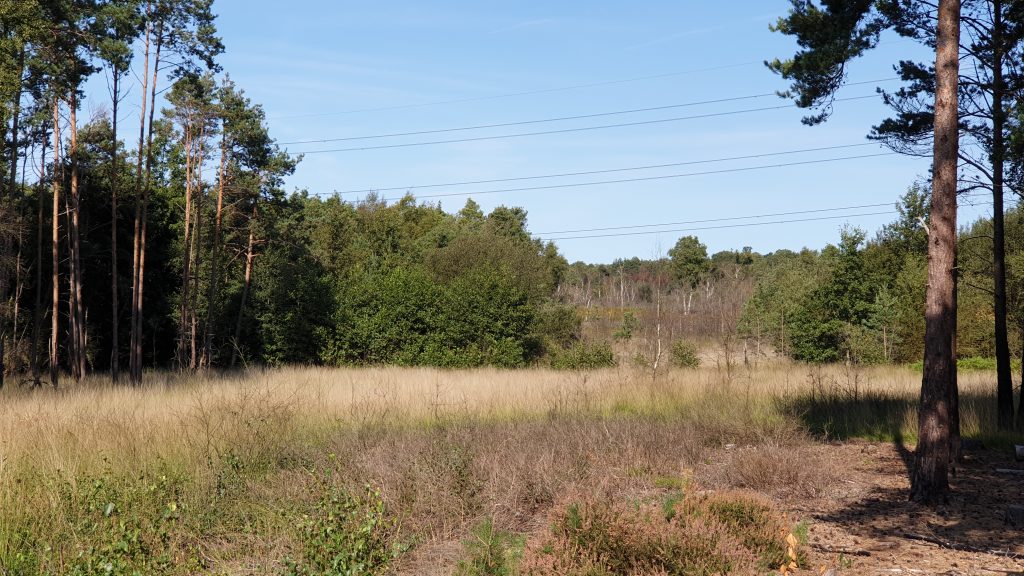 and the terrain changes again, into woodland. 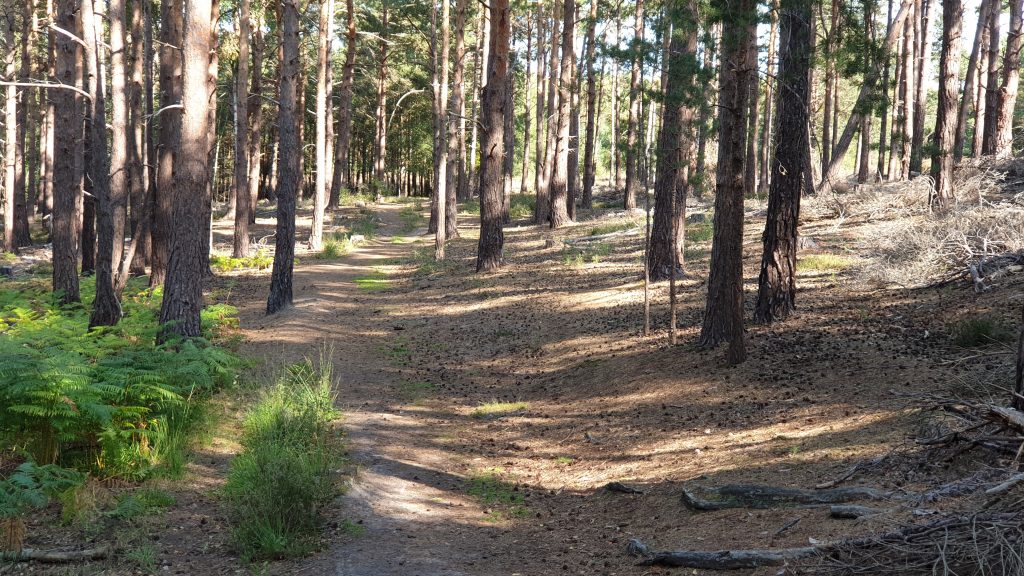 with mystery objects such as this moss-laden “fairy ring” 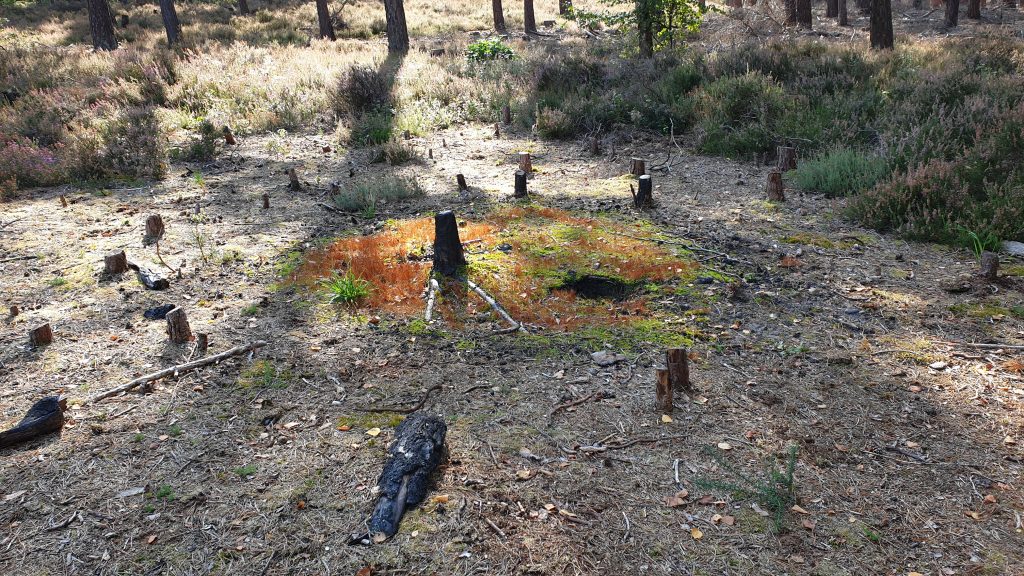 and occasional shelters – we’re not quite sure of the provenance of these; are they official or have schoolkids been out on a field trip or something? 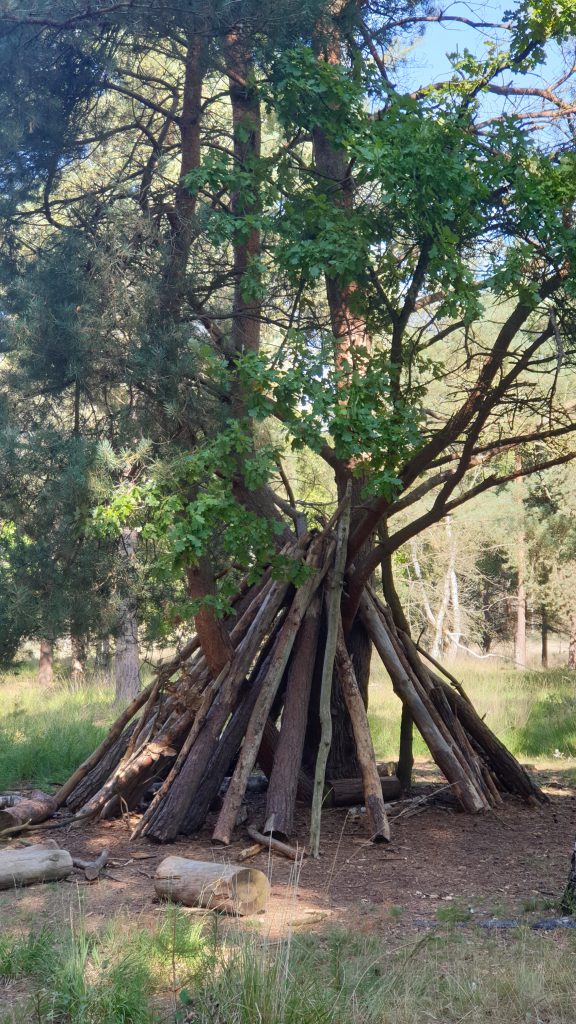 and occasional groups of horse riders might be glimpsed through the trees. 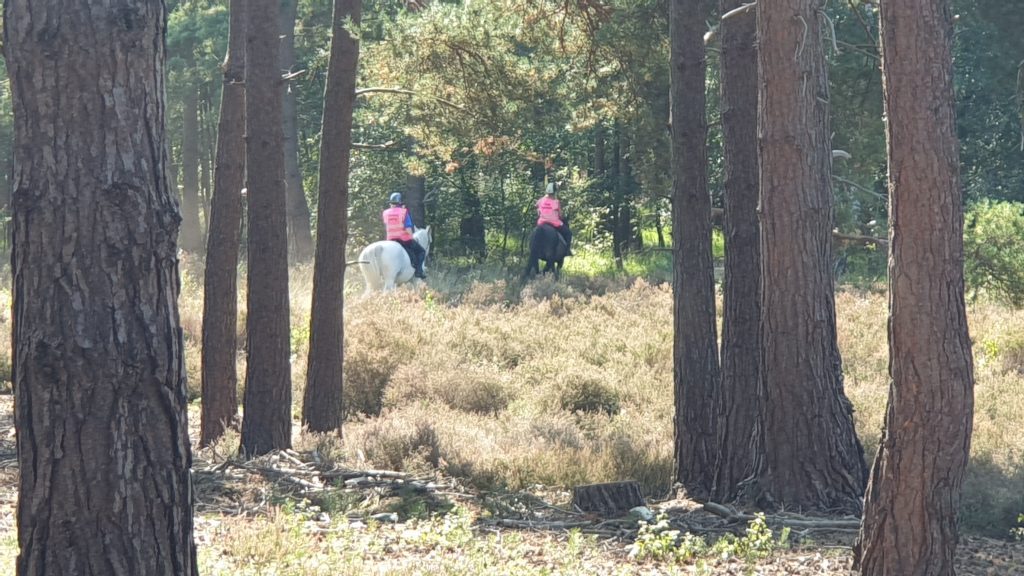 Fishpool – a really lovely body of water – we will return for a more detailed (I hesitate to say in-depth) look later in the Cami-flage endeavour.  This seemed like a perfect scene to show our gin bottle. 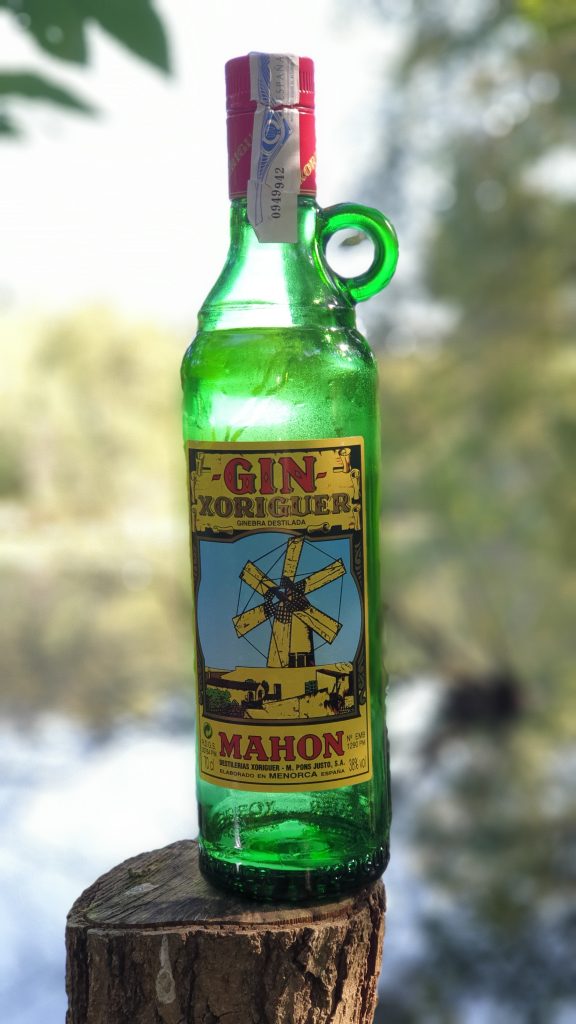 The roads hereabouts play host to some lovely houses, like this one 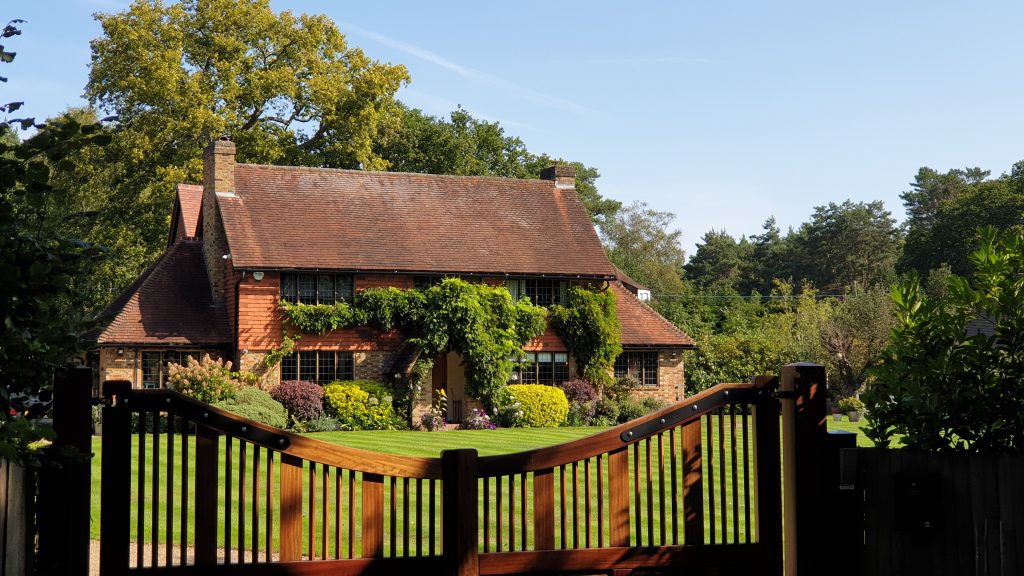 and it becomes clear that Chobham is home to some serious horsey business. 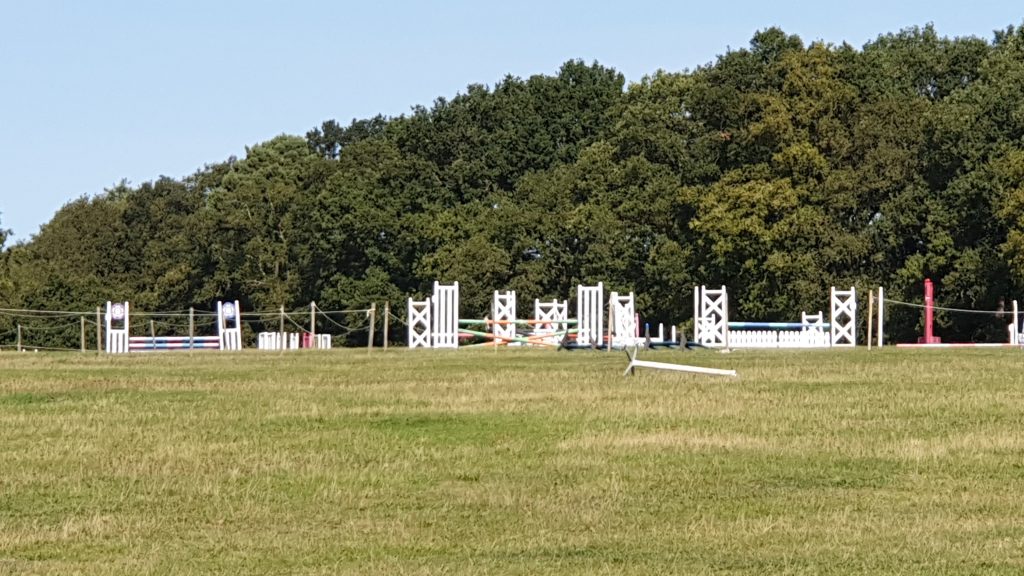 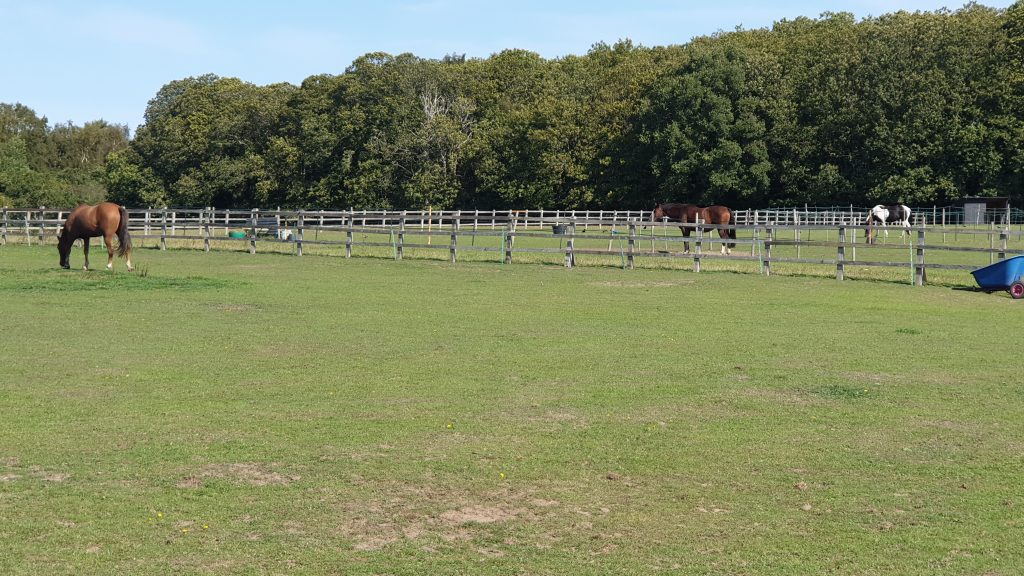 Much of this is based around Chobham Park Farm 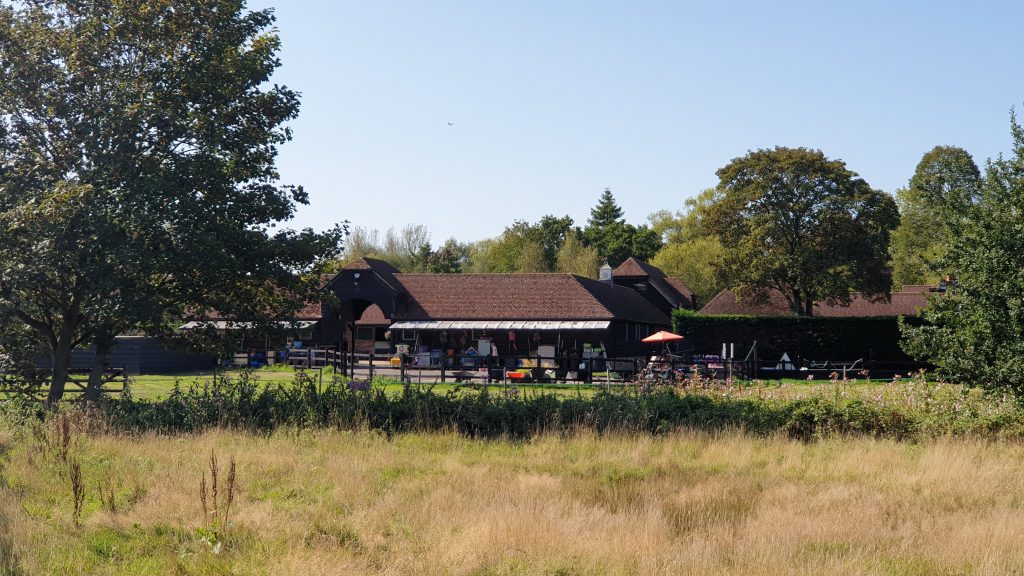 where they have many fields and horses, and also something of an issue with Himalayan Balsam, which they need to sort out pronto, before it gets even more established. 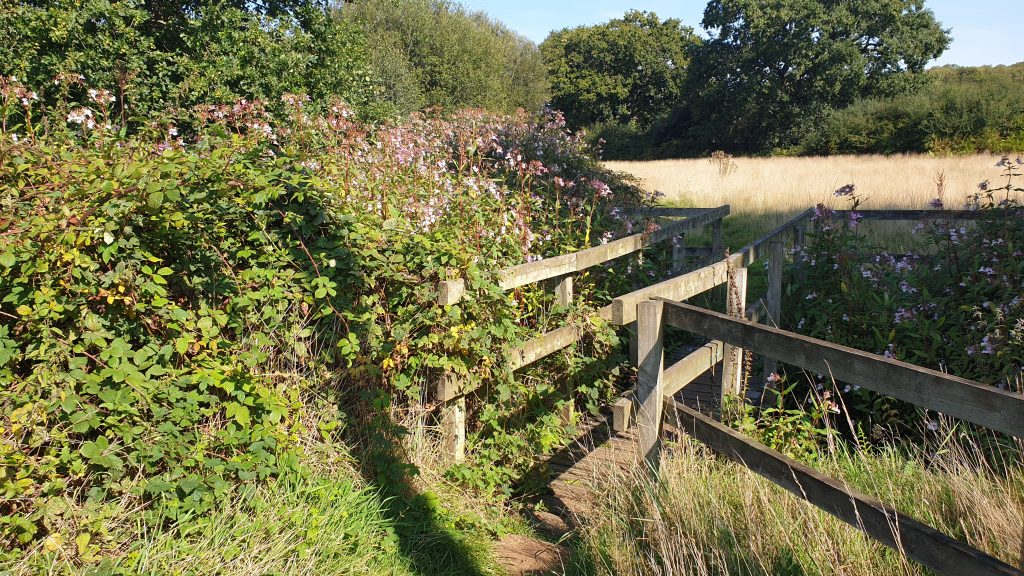 The track carries on through woodland, past some truly wonderful properties 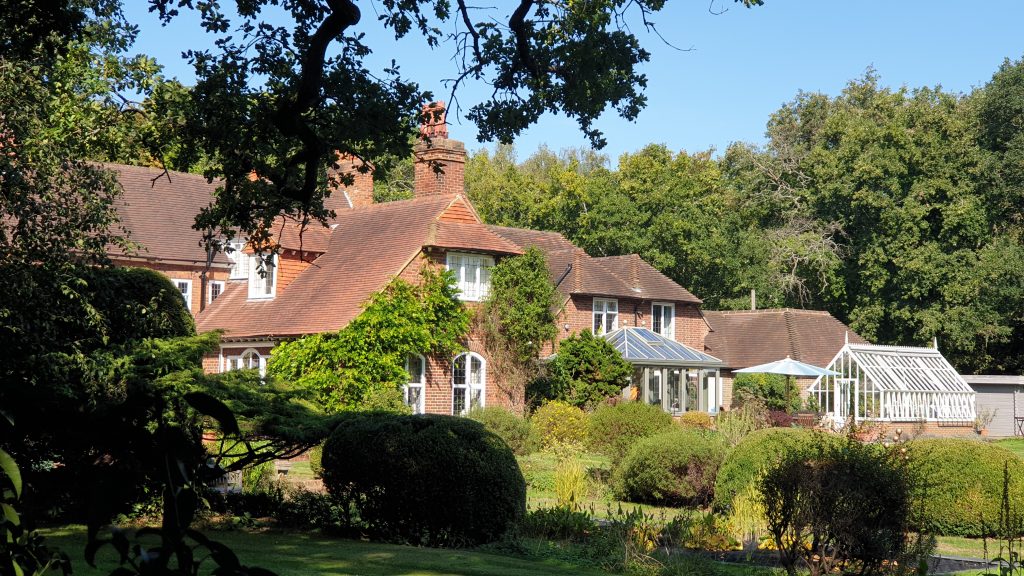 and eventually debouches on the northern fringes of Chobham village, where you can find a village green and the Four Horseshoes, a decent gastropub. 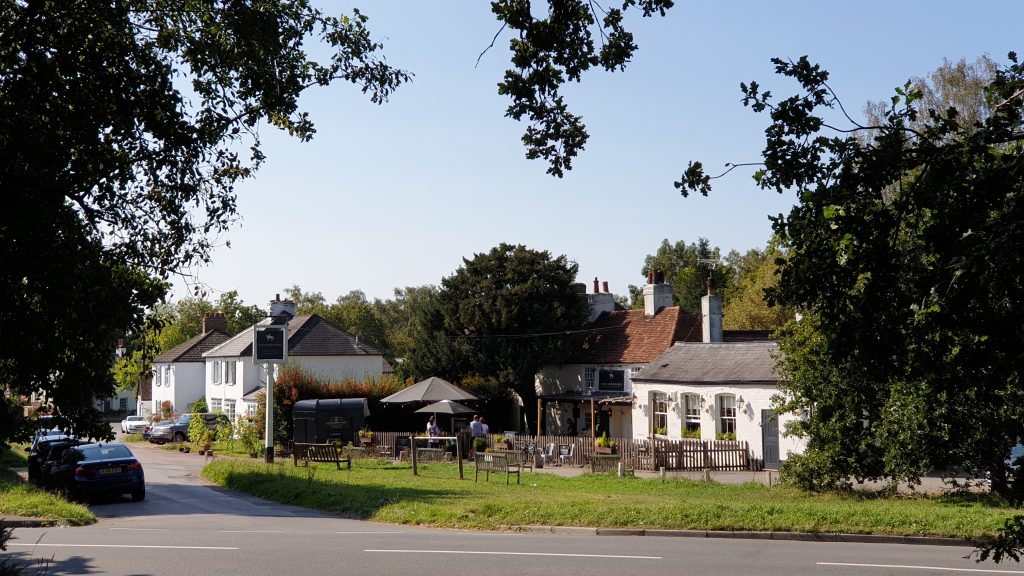 The buildings in these parts of the village are very attractive.  Just beside the pub is a (posh) restaurant called Stovells, 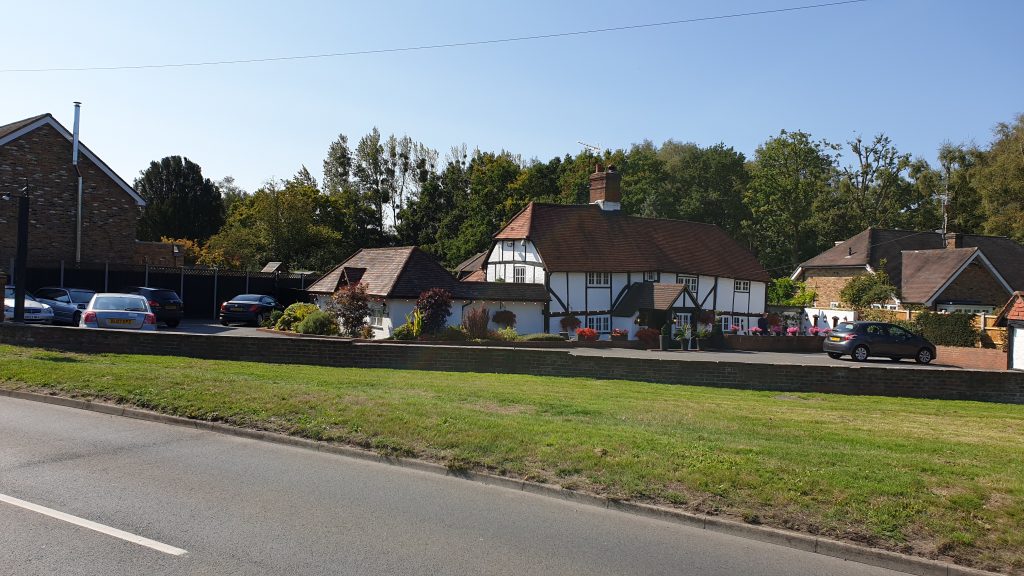 and there are some really attractive cottages further up the road towards Sunningdale. 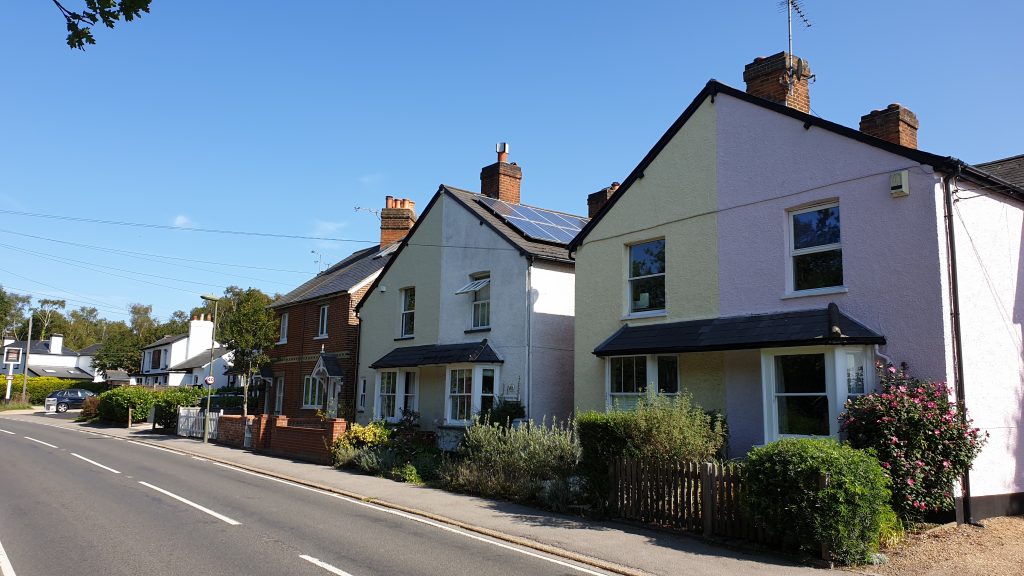 At this point, it’s entirely possible to miss the trail, unless you know about the footpath, which leaves the road just beyond this fence 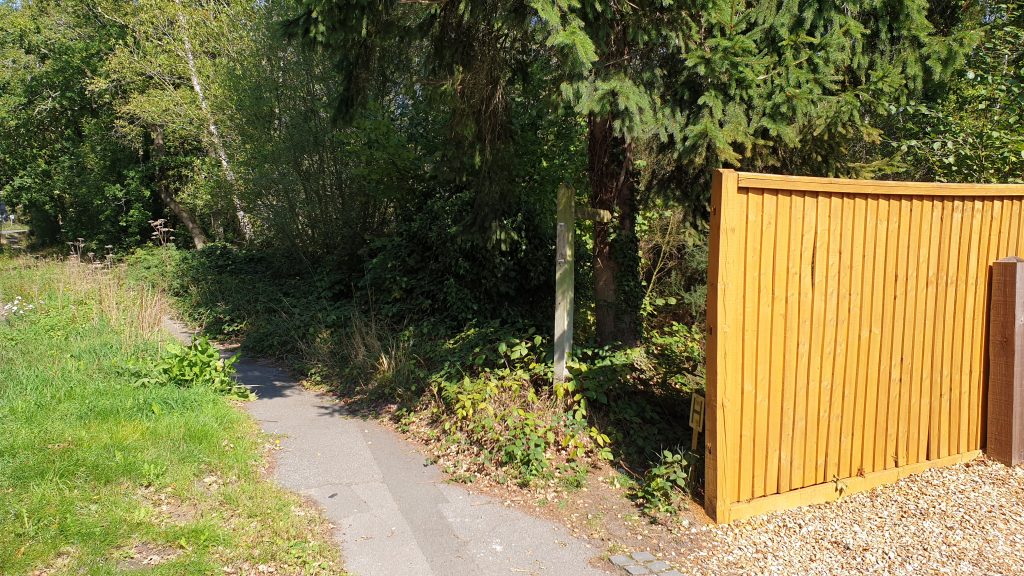 and leads into another little world of tracks and heathland 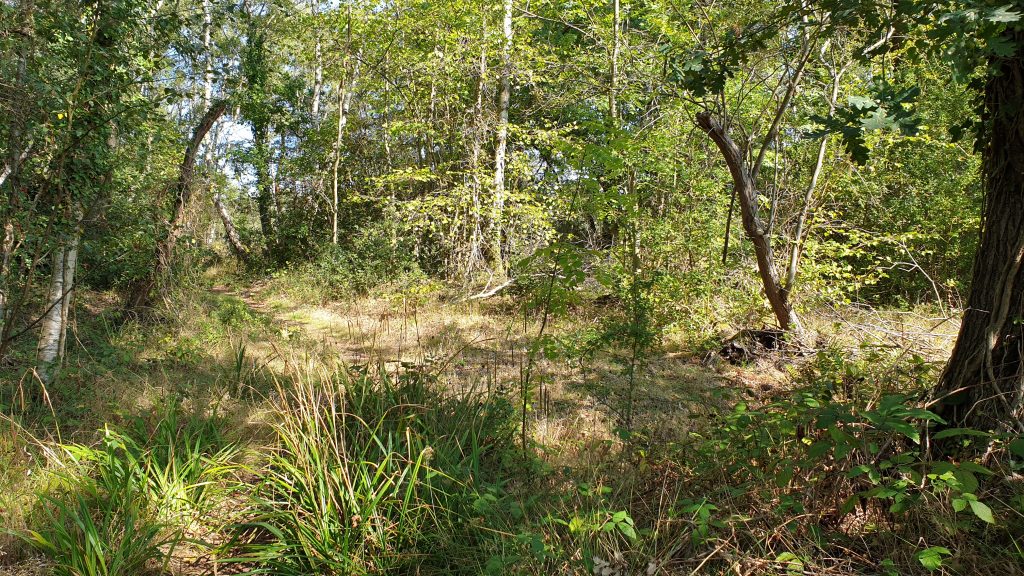 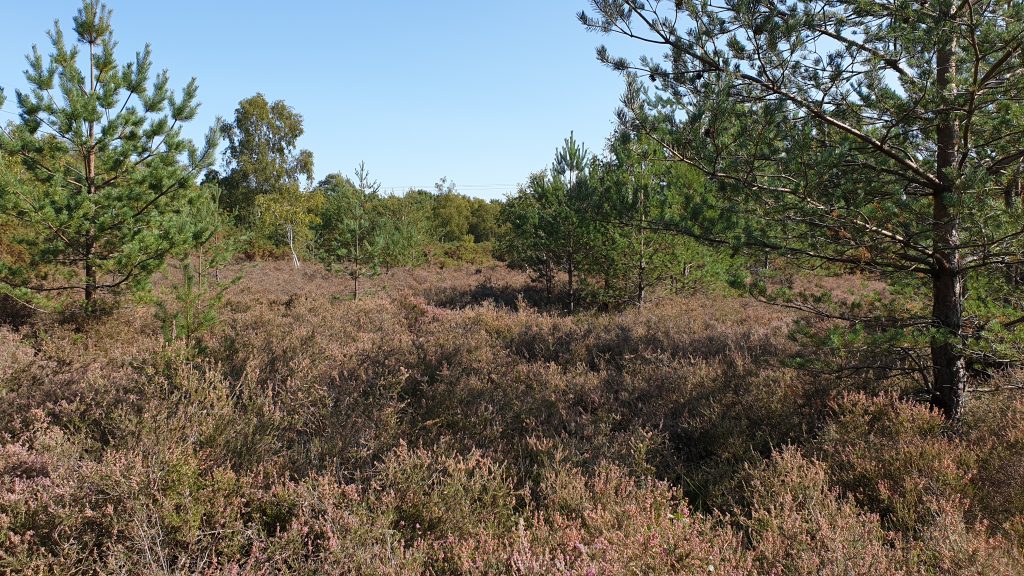 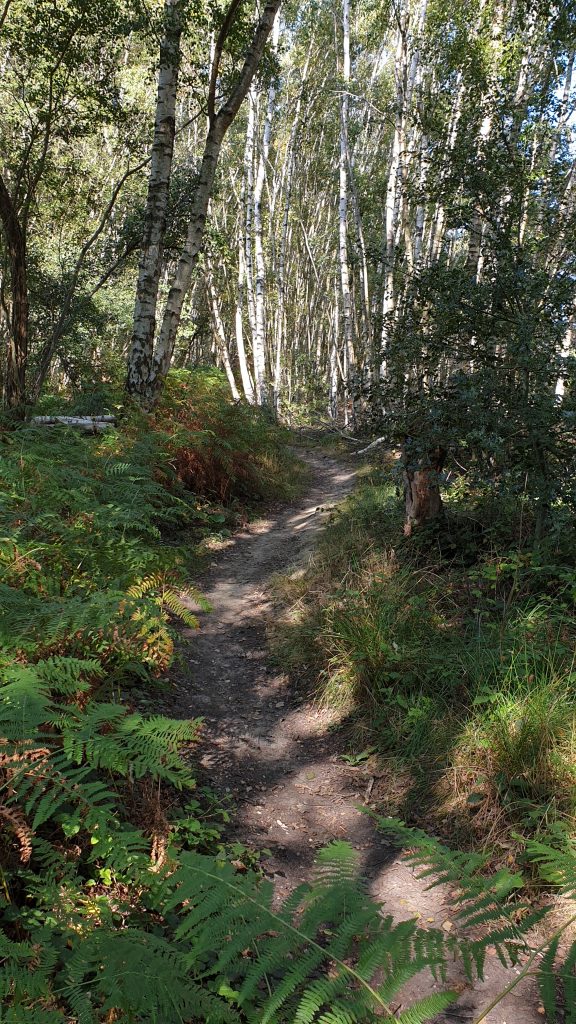 and back into the more familiar open healthland 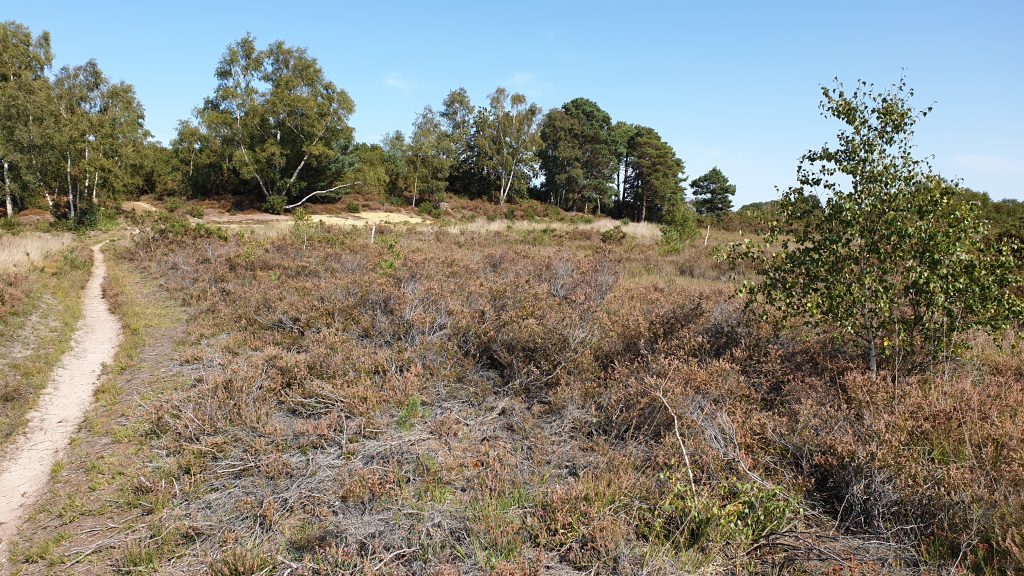 before heading back to the car park where we started.

This is a lovely walk, showing off the range and variety of Chobham Common.  On a day like today, sunny and warm, it’s a delight to walk around.  We covered 6.34 miles today, thus exceeding the Menorca equivalent, which was 5.94.  So we are, as it were, ahead of ourselves on the overall distance travelled (so far, over 28.5 miles).

Tomorrow sees a walk that is little longer but somewhat more challenging, up Holmbury and Pitch Hills.  So please join us as we pant our way up and down parts of the Surrey Hills.  See you there!