The obligatory weather comparison showed very little to choose between Surrey and Menorca; in either case we would be walking in the heat of the day. 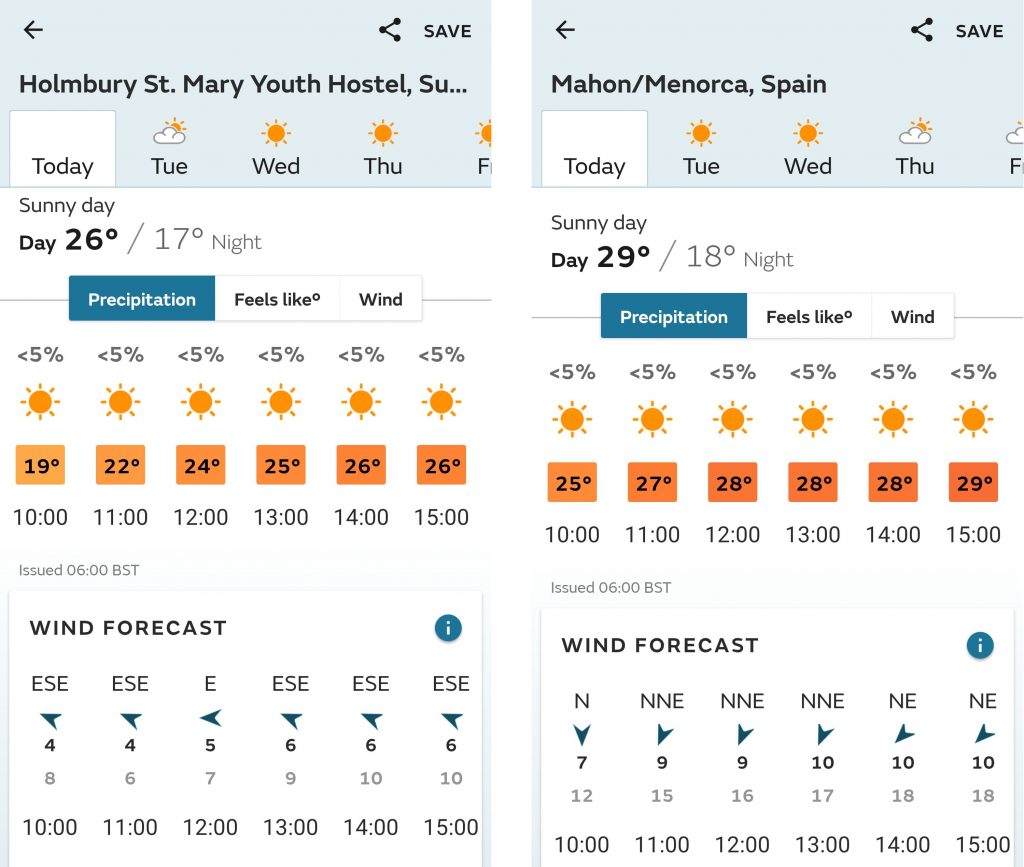 We had some domestic admin to handle (to do with a septic tank – better not to ask, really) before we could go walking. Today’s walk was shorter than some, but more intense than others, involving climbing a couple of hills.

So it was just after 12.00 when we mad dogs went out into the midday sun, starting from a car park, engagingly called “Walking Bottom” (the rather tenuous justification for the title of this post). 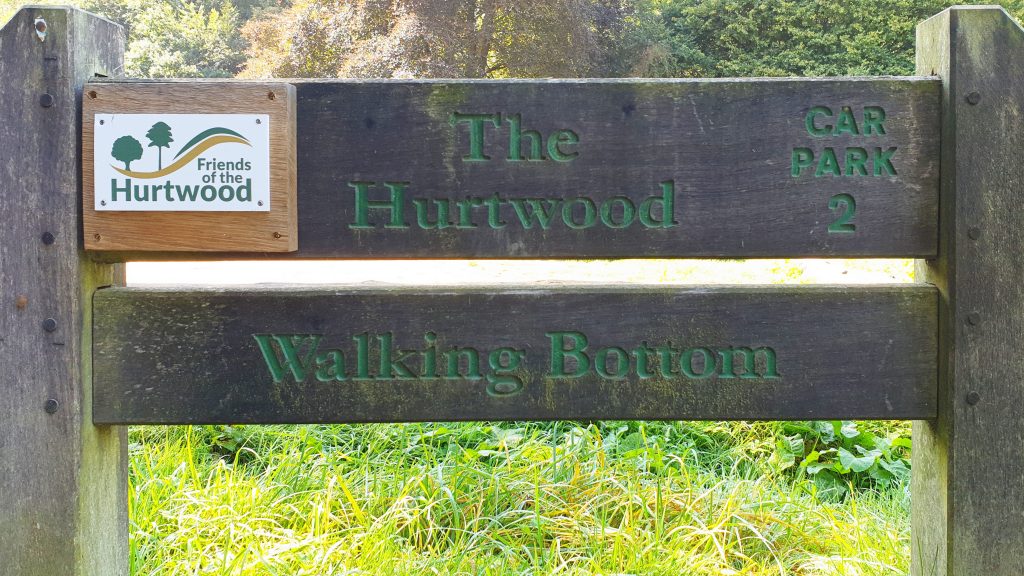 The track leads from the car park, down into the rather pretty village of Peaslake. 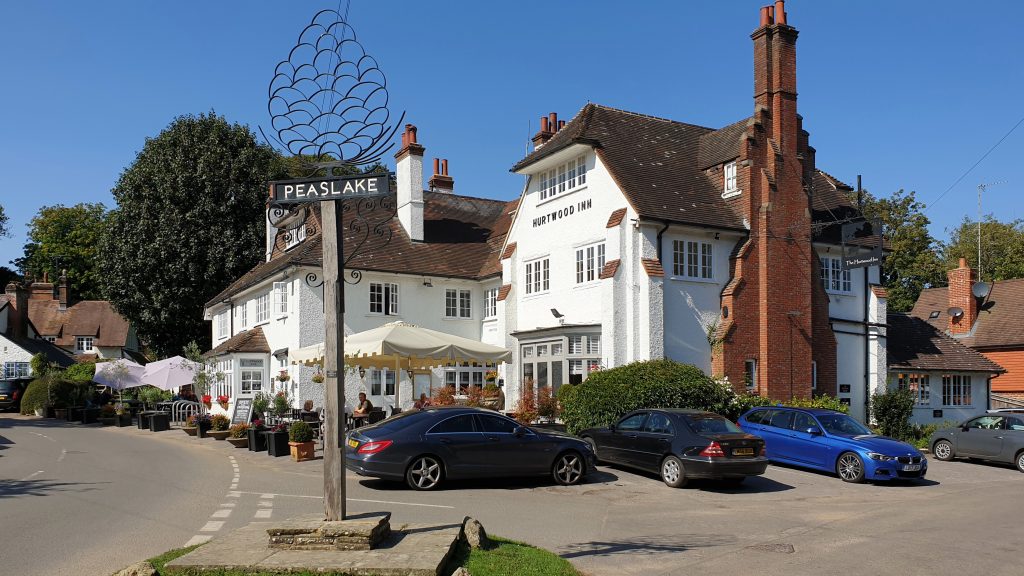 Normally, Peaslake is absolutely awash with cyclists, as it’s in the Surrey Hills, and thus attractive to the MAMIL road cyclists; and also at the foot of Pitch Hill, hence a magnet for the grunge of the cycling world, mountain bikers. But today, the village was quiet and pleasant.

The downhill track into the village transforms swiftly into an uphill climb out of it. 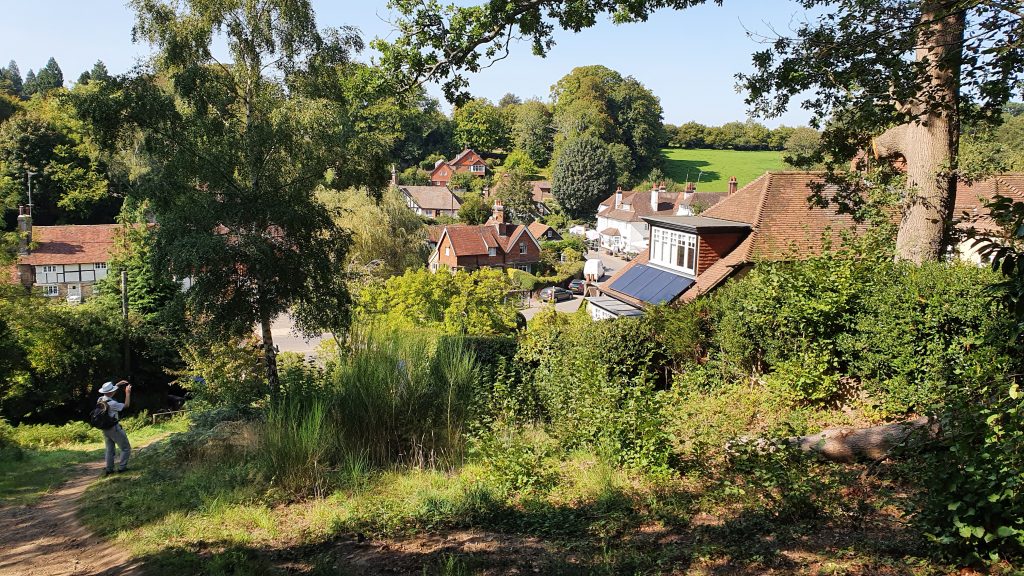 (that’s me down the path, using the need to take a photo as an excuse to have a breather).  Once up the climb, the track takes the form of the sort of woodland and heathland trails that are familiar to anyone who has walked in this part of Surrey – and, I hope, to you, dear reader, as you will have been following these posts closely, of course, won’t you?  Good.

We passed a couple of ponds 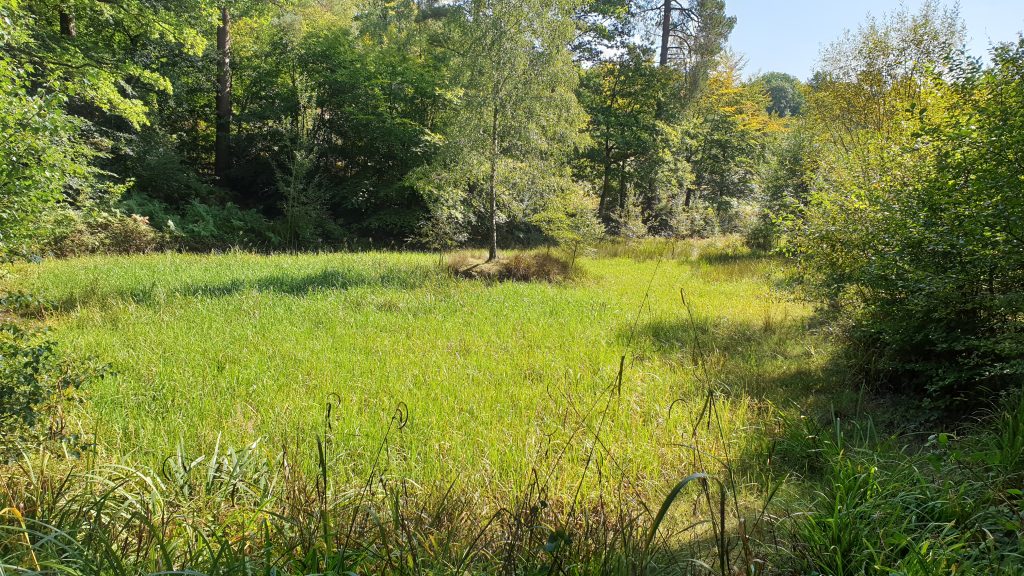 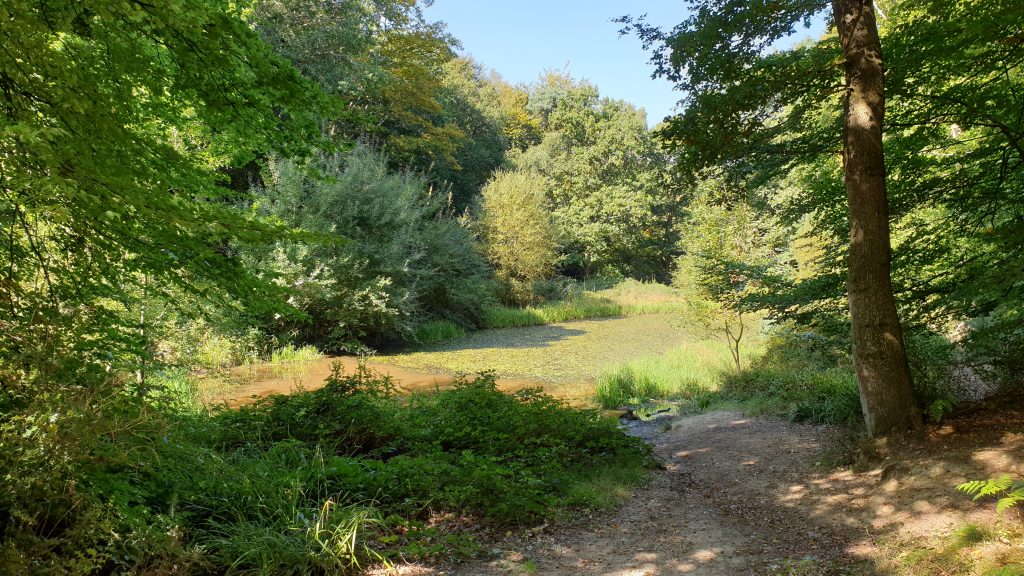 neither of which were bounteously supplied with water, and one even looked entirely dry, a consequence of a very dry Spring and Summer round these ‘ere parts. 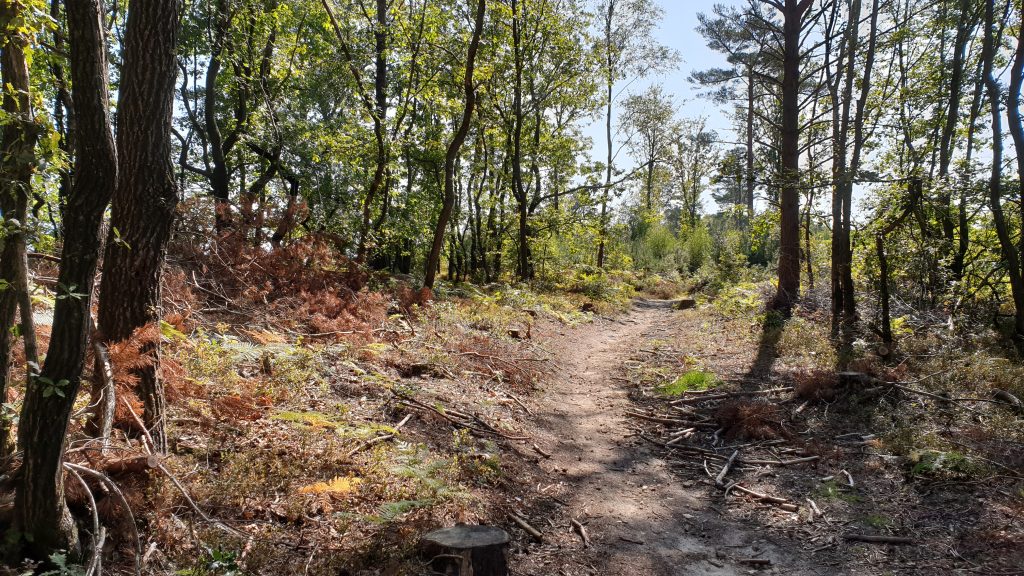 The next part of the track leads into what the Fancy-Free Walks website describes as a “delicious veldt”.  Indeed, when we first did this walk (several years ago, now), that’s exactly what it was.  It’s a bit overgrown now…

…but has some lovely clumps of heather and some interesting-looking fungi. 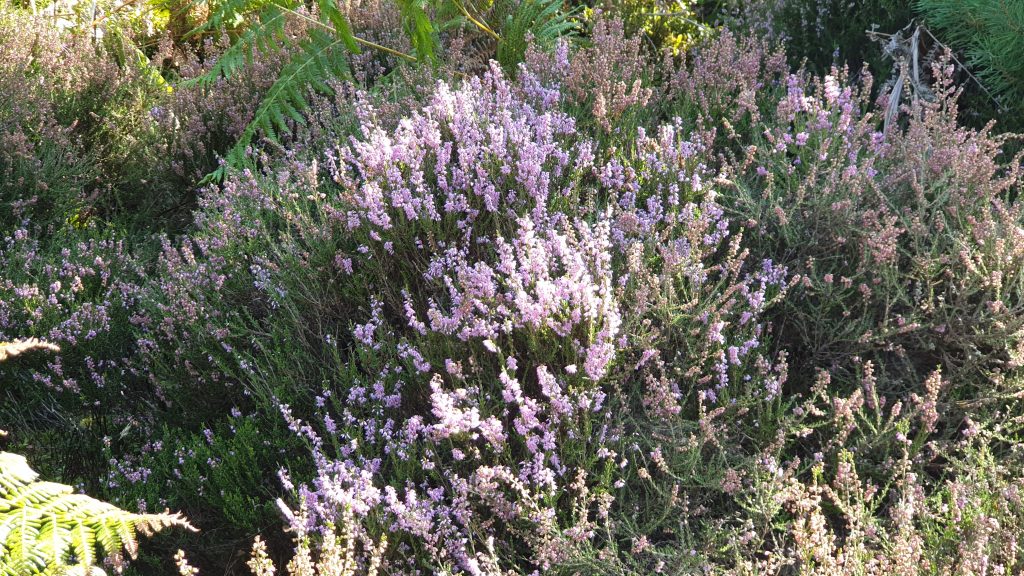 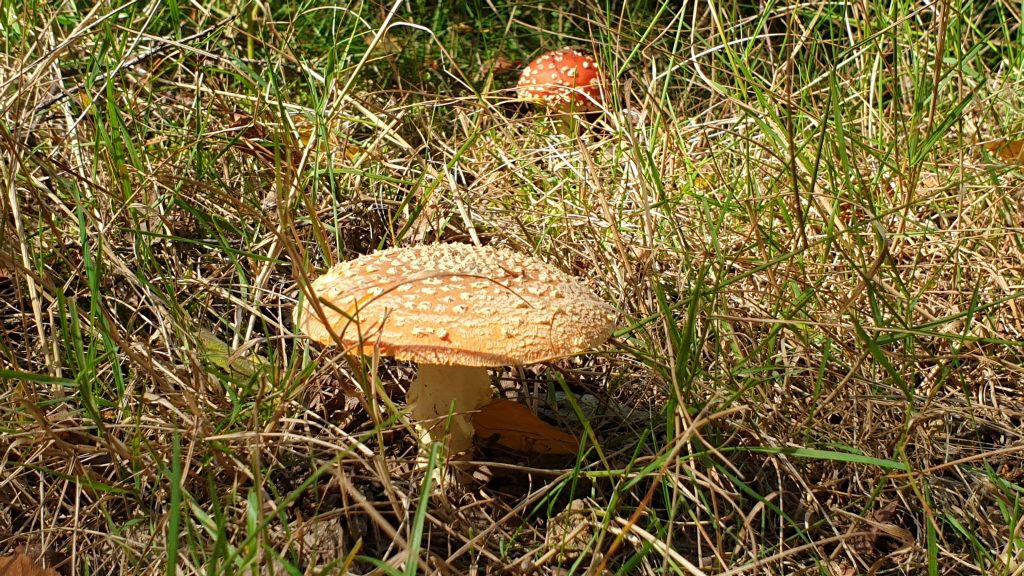 An inexorable climb for another couple of kilometres brought us to the top of the first hill, Holmbury Hill.  You’ll have seen the gin bottle photo from day 2, of course.  The views are quite spectacular. 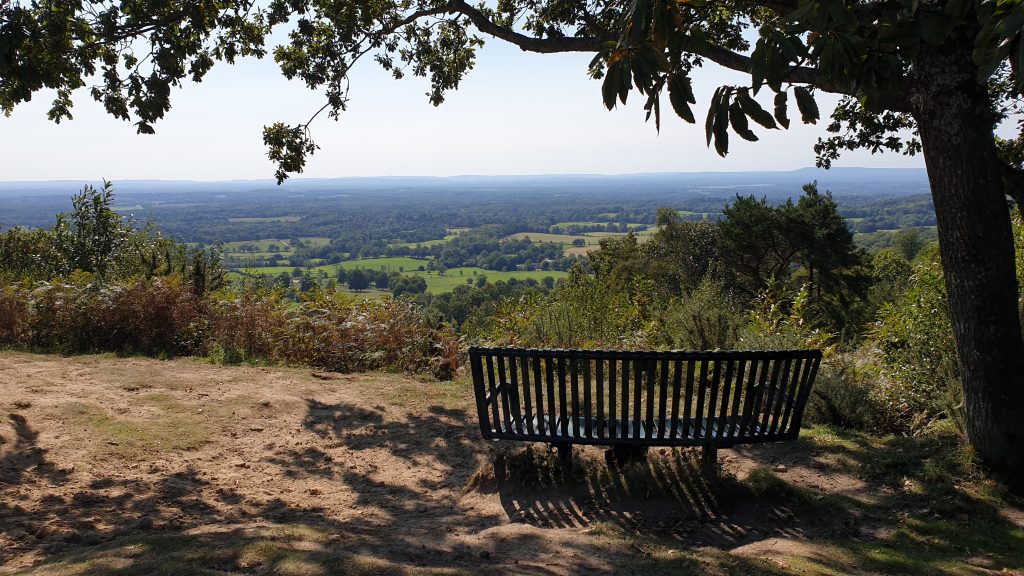 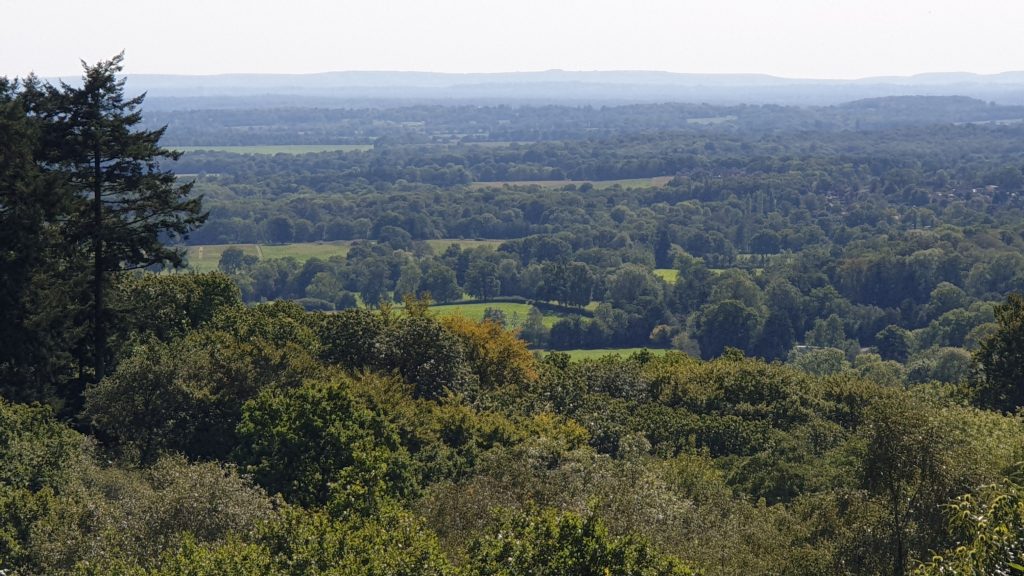 but there were people there, so we moved on to a place a little further down where there is an access path for those of different ability and a rather nice little seating circle.  I whizzed the drone up and took a photo or two. 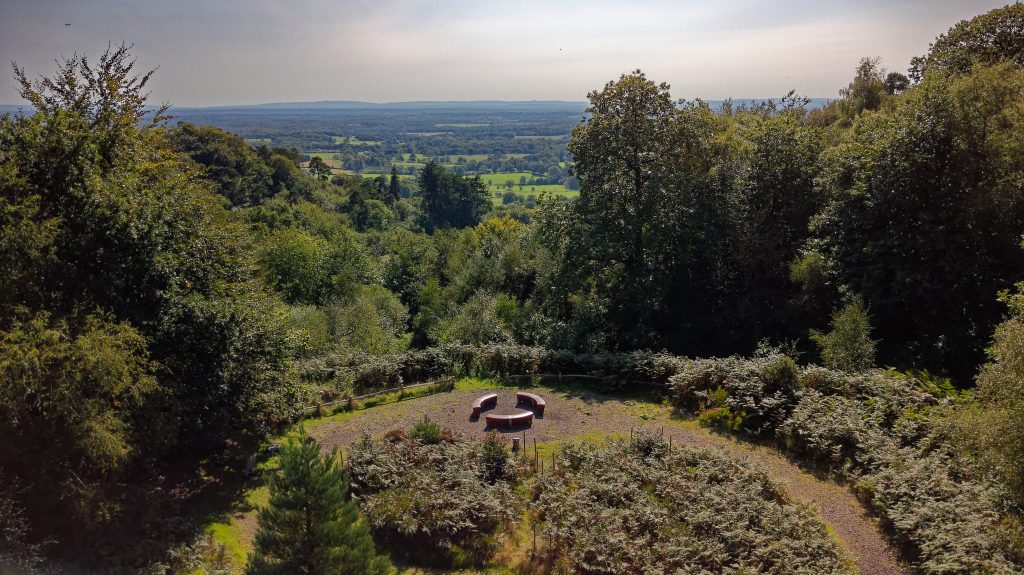 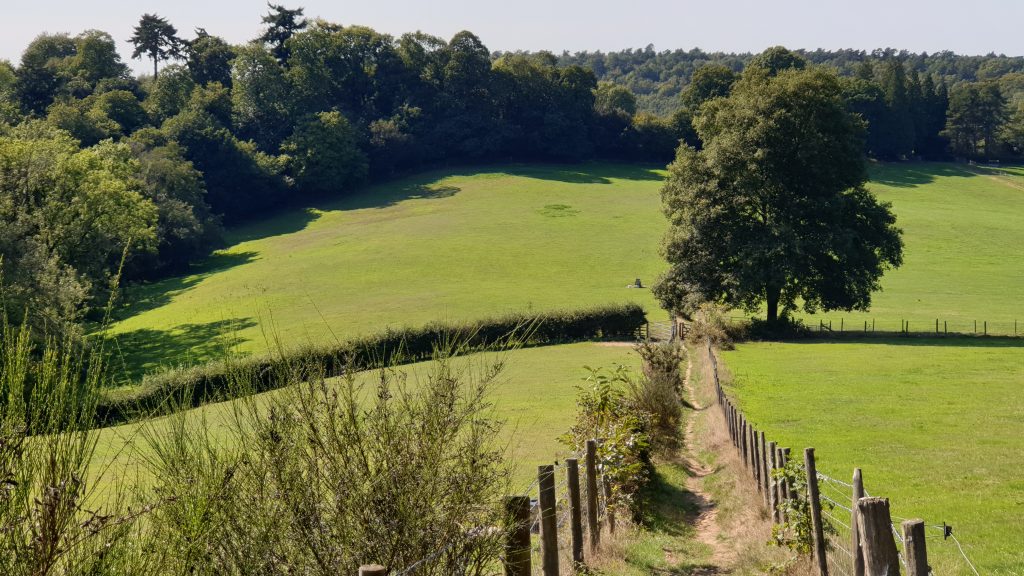 to the start of the ascent up the next hill, Pitch Hill, which is marked by the rather fabulous buildings of the Duke of Kent School. 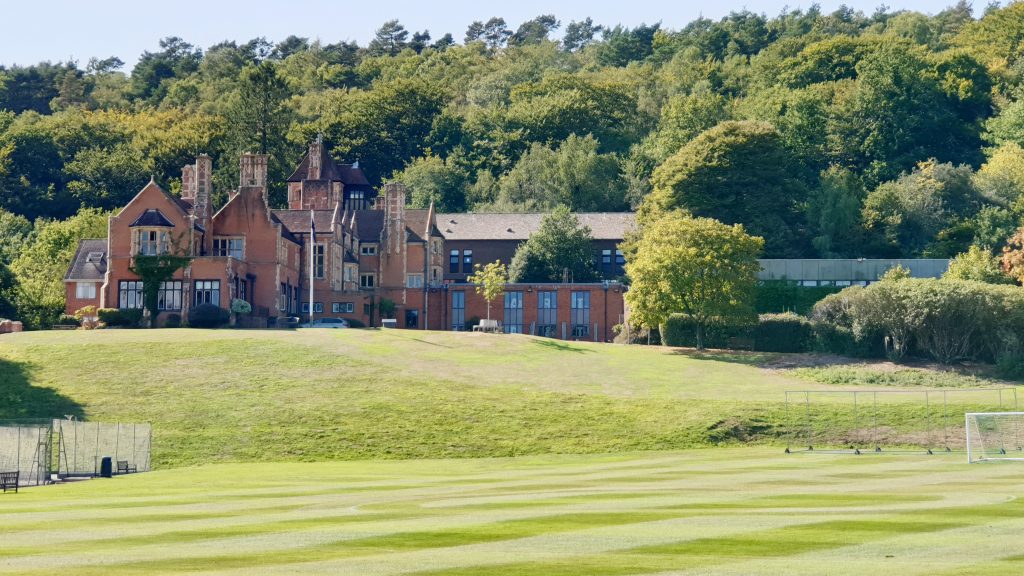 We thought it would be nice to exhibit our gin bottle here, so despite the signs saying that photography was prohibited, we took a quick snap. 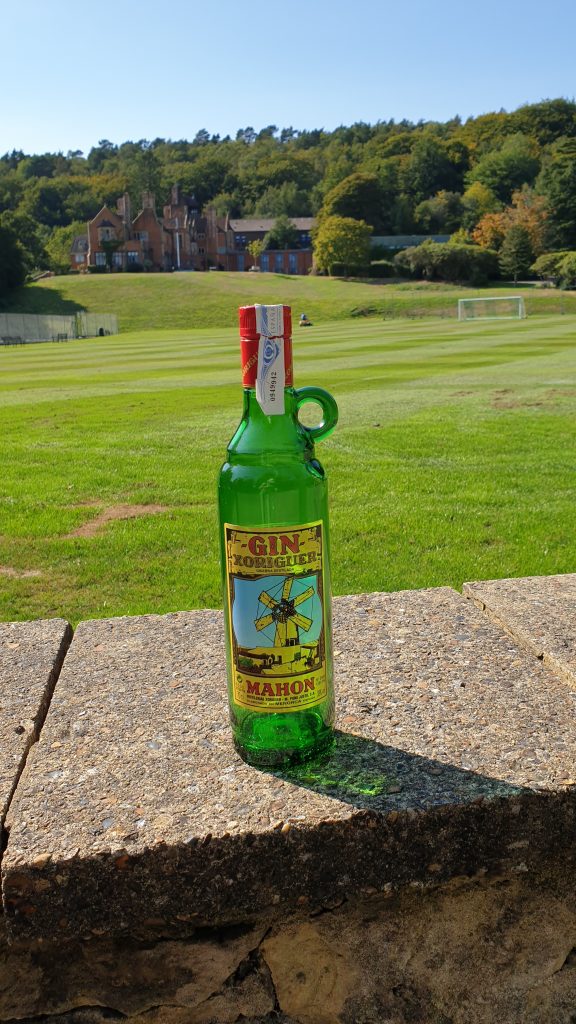 and then moved on to the track, which goes up 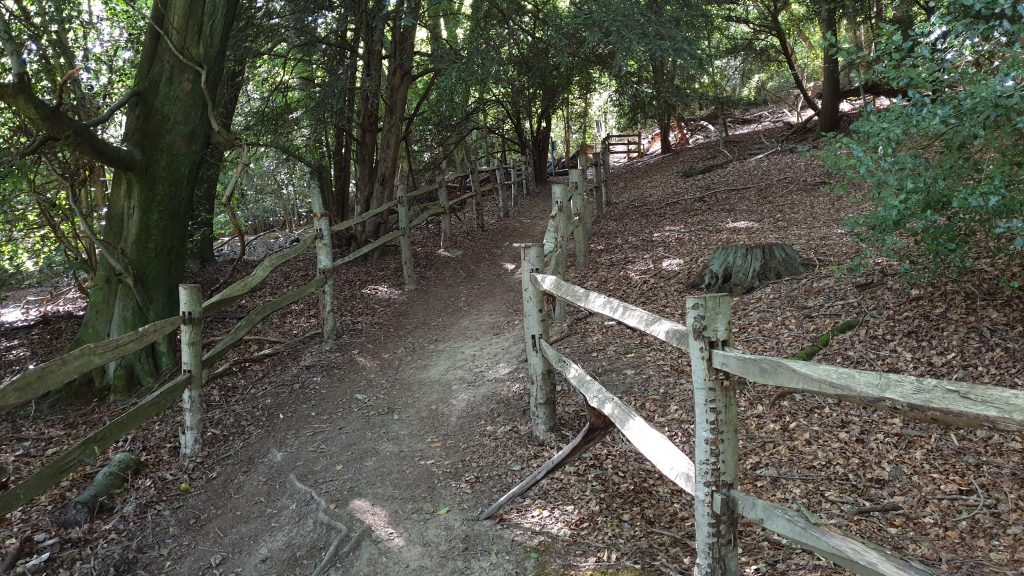 and up, and up 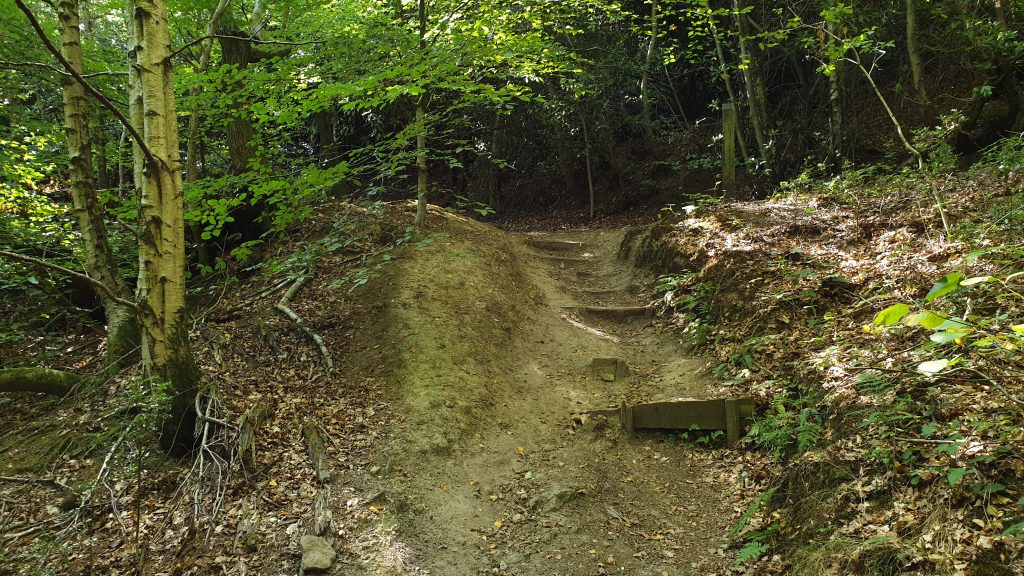 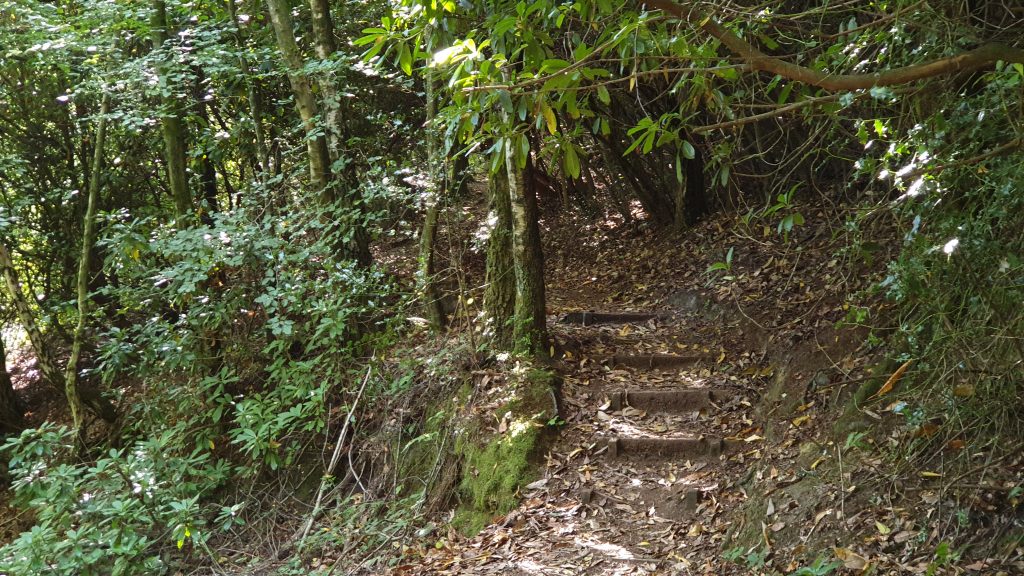 until eventually we got to the top of Pitch Hill.  The view repaid the effort. 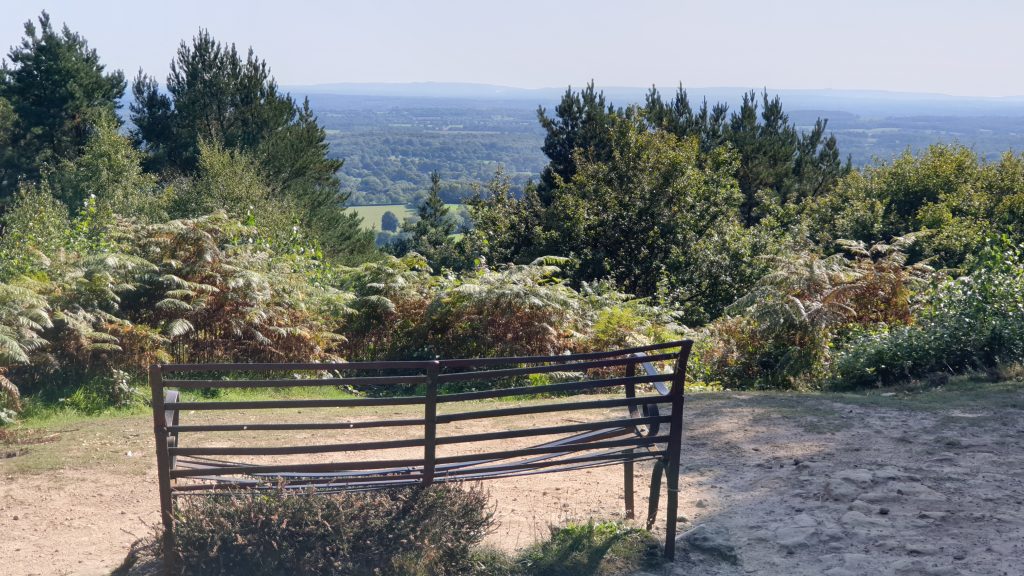 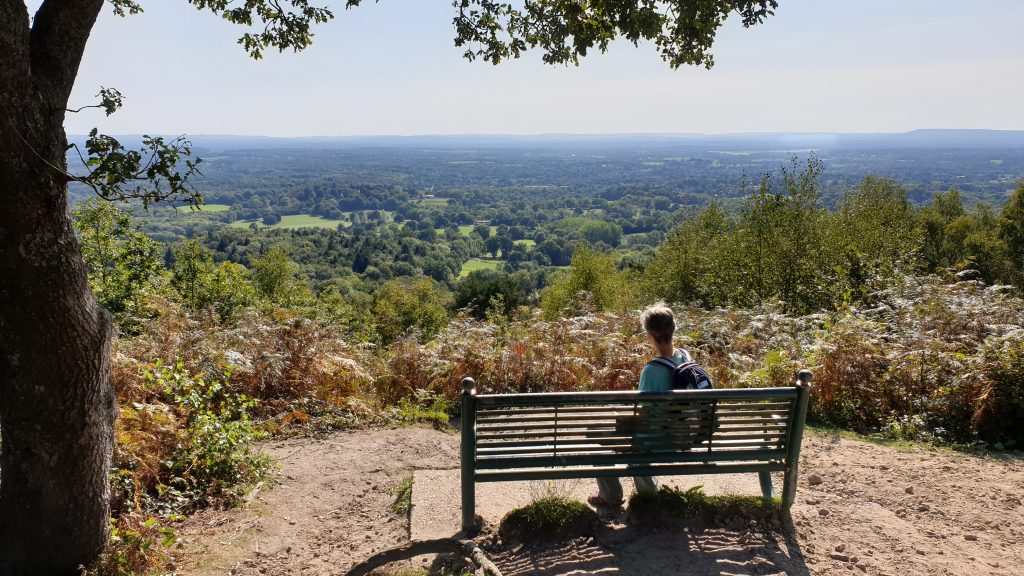 and we took a couple of photos of the gin bottle as well, using the handy trig point as a plinth in one case 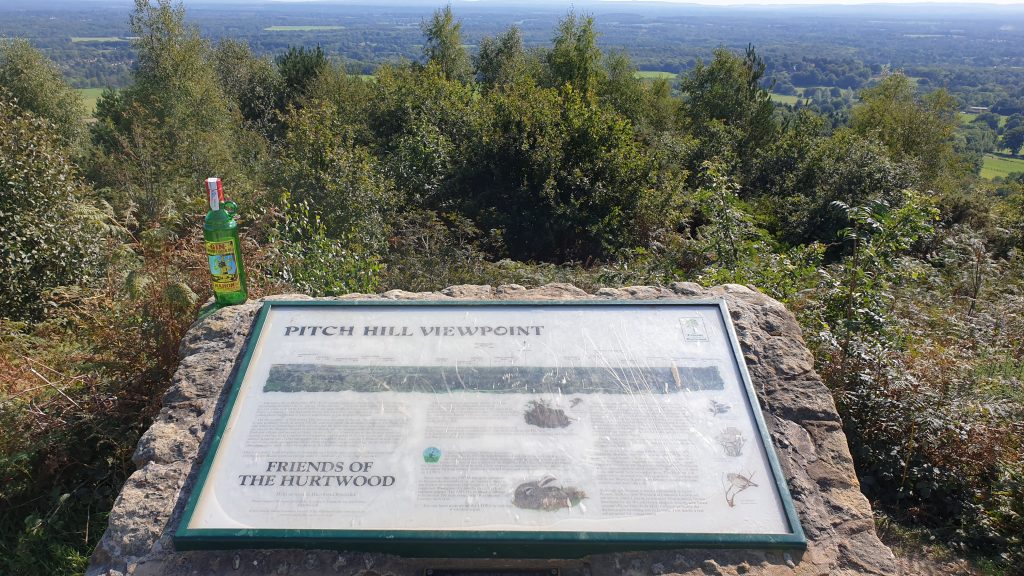 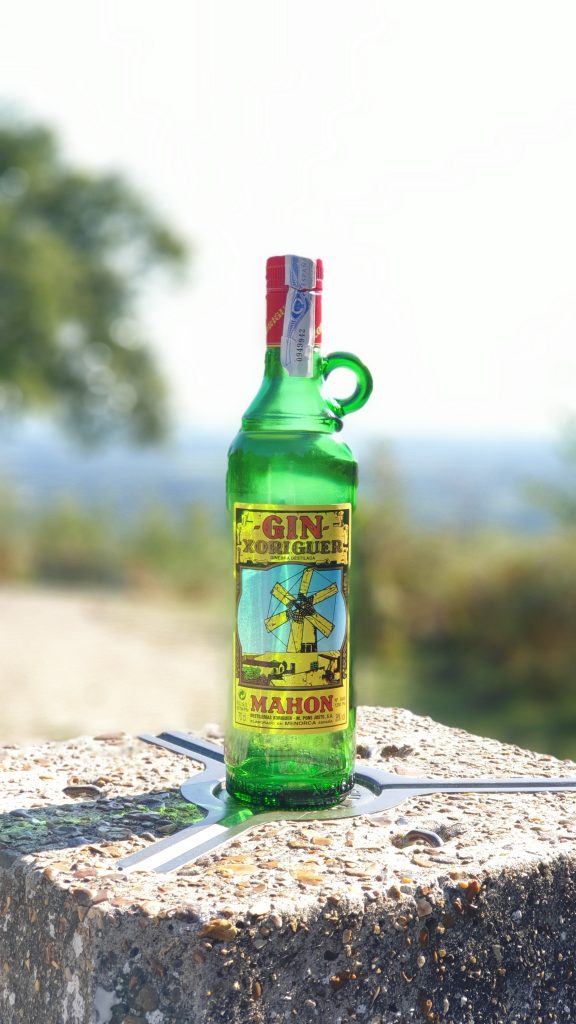 before heading down.  The route down bifurcates and you can choose the “high road” or the “low road”.  Our opinion is that the low road is more interesting,  Actually, they’re both just wide forestry tracks, but there’s more peripheral scenery on the low road. 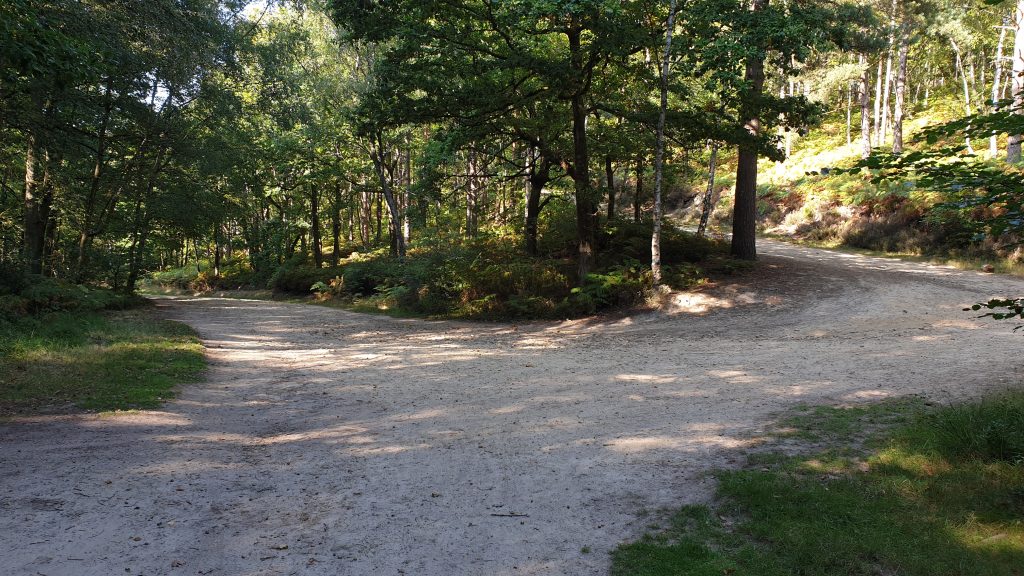 And this took us back to the car, some 6.81 miles after we left it (by comparison, the Menorca equivalent would be 6.77, so we’re still ahead of the game).

Like all of the walks we plan, this is a nice one.  It can be quite hard work in places, but the general scenery and the hilltop views are lovely.  Of course the fact that it was a sunny day helped enormously.

Tomorrow’s walk sees us leave the Surrey Hills for a couple of excursions around Windsor Great Park.  We’re looking forward to circumambling Virginia Water Lake tomorrow, so please join us – same Cami-time, same Cami-channel – to see what the day was like.  ‘Bye for now!