Review of the after-effects of Day 1 revealed no serious injuries from 13 miles’ walking beyond some soreness in Jane’s little toes. She therefore decided to do today’s walk – only some 9 miles – in sandals. Well, Tevas, actually, but they look like sandals to me.

That decision taken, we had to check on the weather comparison between Surrey and Menorca. 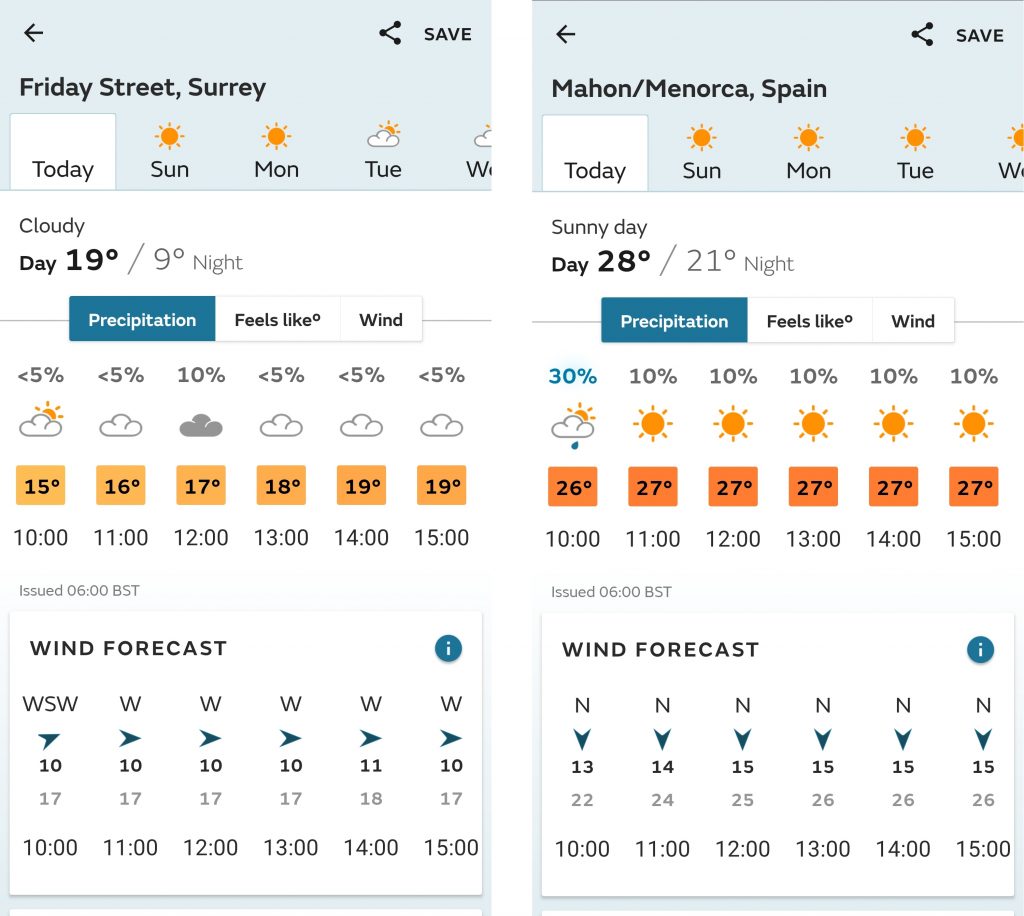 From a walking point of view, actually, Surrey wins; those Menorcan temperatures are more suited to sitting in a shady bar with a glass of something cold. An attractive proposition, yes, but not in line with our mission statement.

As you can see, it takes in two hills, Leith and Holmbury. So, off we drove to the start point, Friday Street in the Surrey Hills. At this point it became clear that a combination of lockdown and retirement meant that we’d lost track of the days. Today is a Saturday, which means nothing particular to us; but to normal people, it’s a weekend in a phase where Covid life is beginning to show signs of normality. So there was quite a difference in the state of the car park for yesterday’s walk 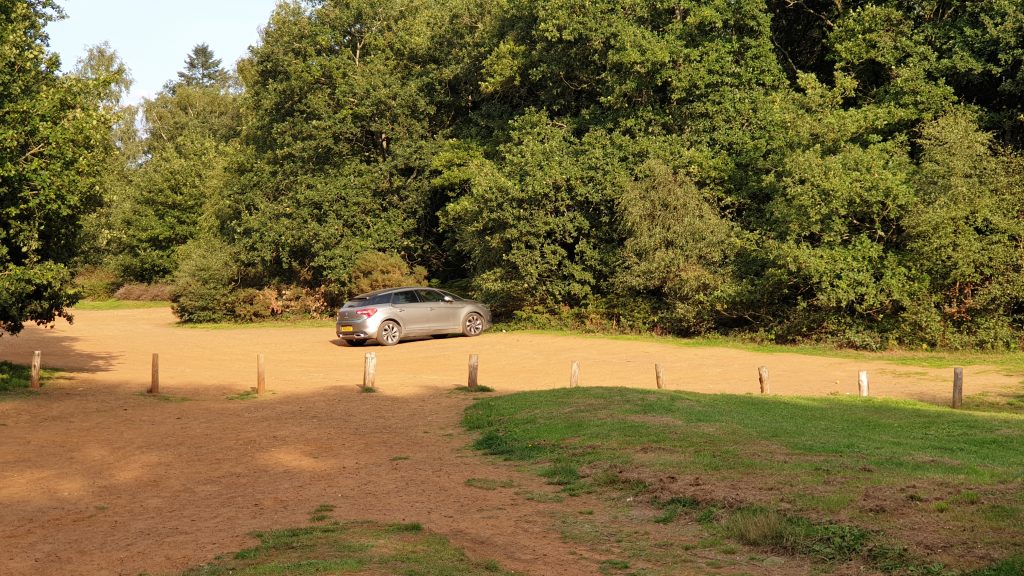 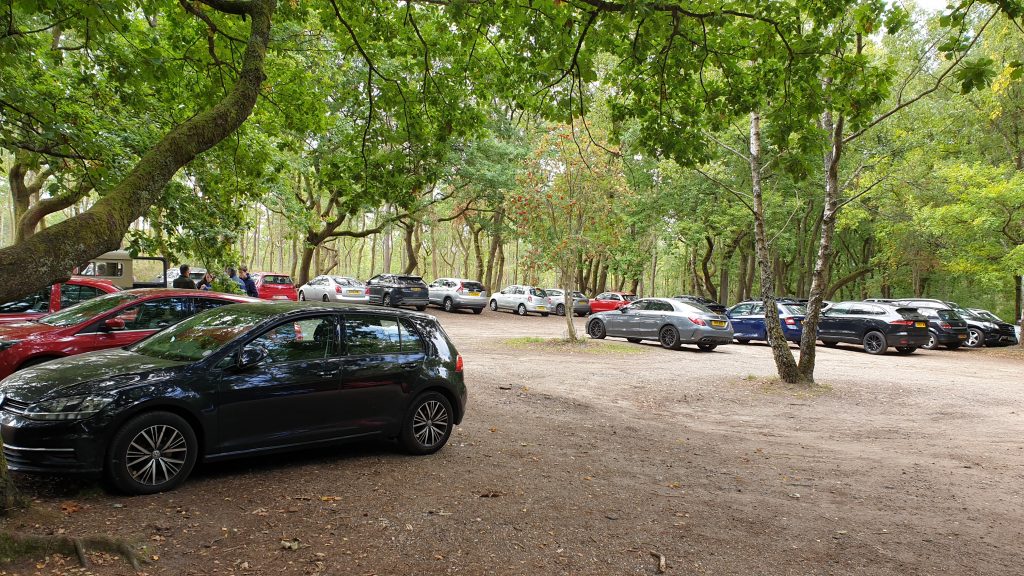 We were, frankly, lucky to find a space. But we did, and set off down the hill in the general direction of Friday Street. There’s a pond

and, very soon after, a pub called the Stephan Langton, 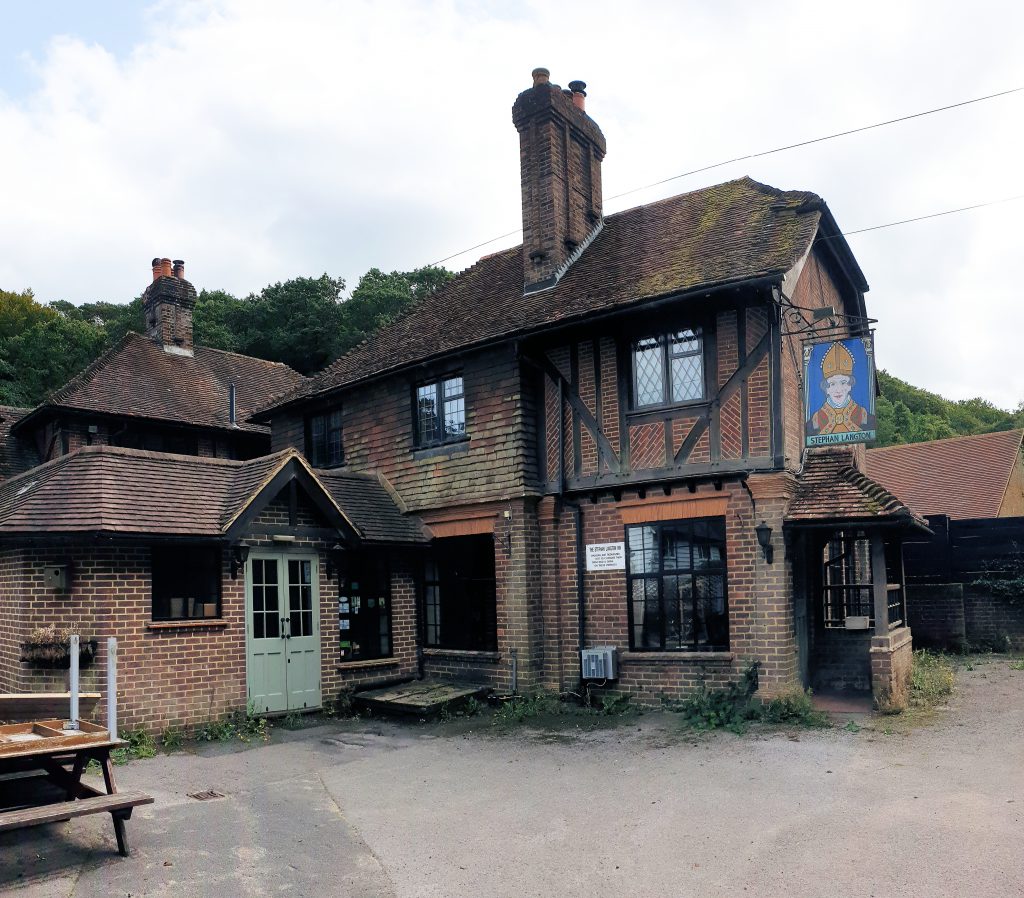 which had been my plan A for a post-constitutional Lunch until I discovered, in the research phase of this exercise, that it was no longer open. Judging by the number of people picnicking nearby, I’d guess that a few of them had had that plan A but hadn’t done their homework.

Given that we’re almost exclusively walking in Surrey, the basic scenery is going to be similar from one day to the next, so I’ll spare you too many photos of woodland, tracks and heaths. But every so often there’s a striking scene, such as these bonkers beech trees (as opposed to conkers chestnuts, ho ho) 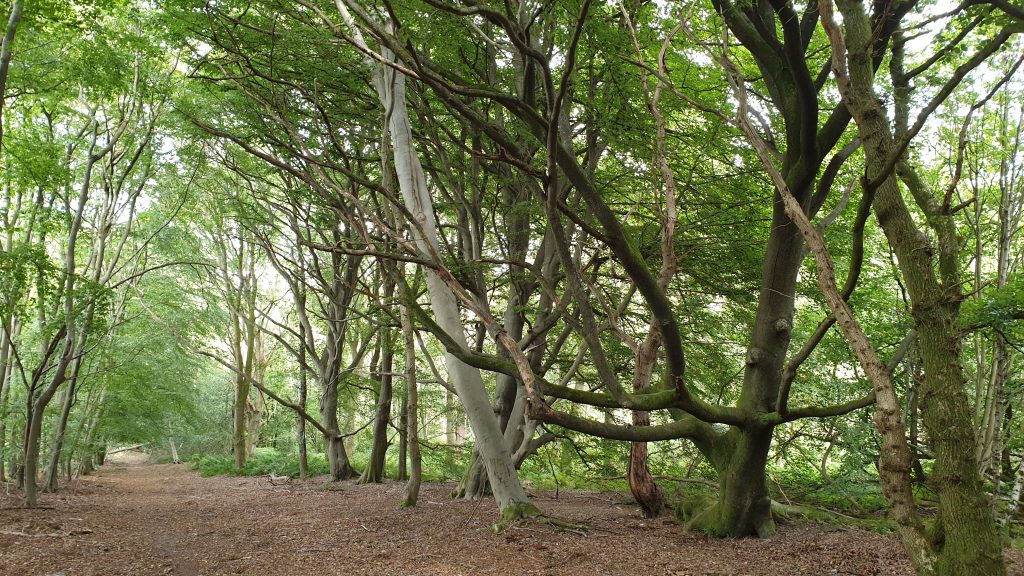 and noteworthy buildings, which really are restful on the eye as one passes. 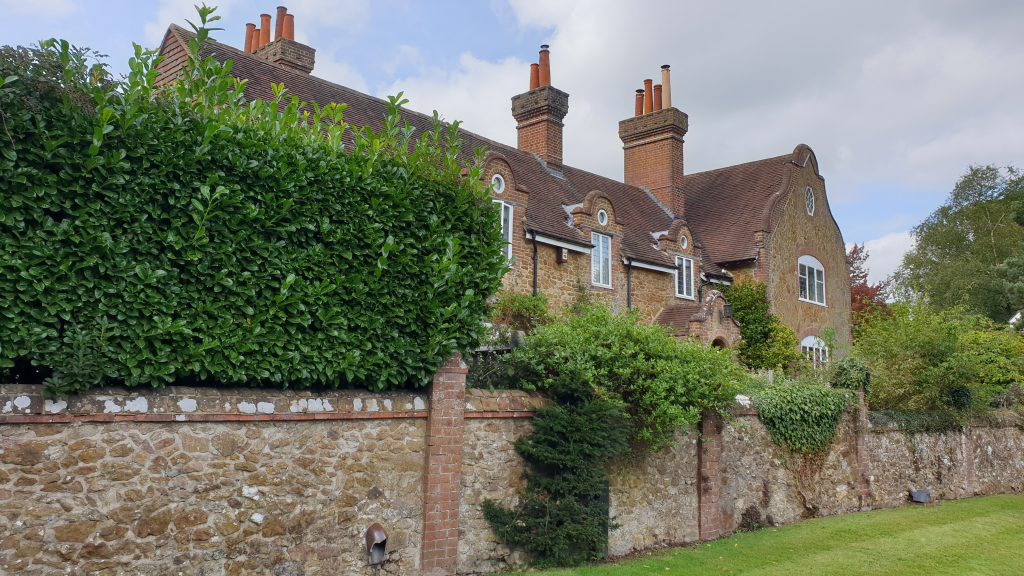 Actually, some of the trails are really rather striking, too, so I will share the occasional one, such as this. 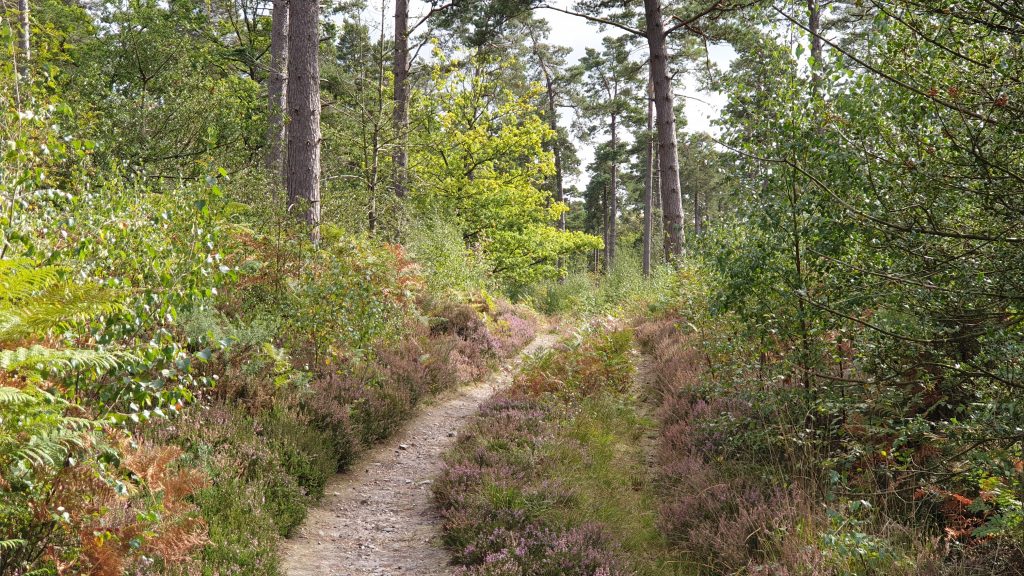 Our first landmark on this route was the High Tower mentioned in my rather tortuous title, the tower at the top of Leith Hill, the highest point in Surrey at 294 m (965 ft) above sea level. Unsurprisingly, then, the path led upwards and upwards. At one point, although we were (a) following instructions from Fancy-Free Walks and (b) retracing a track we’d walked before, we managed to stray, as you can see from the green line showing quite clearly that we’d missed our way. 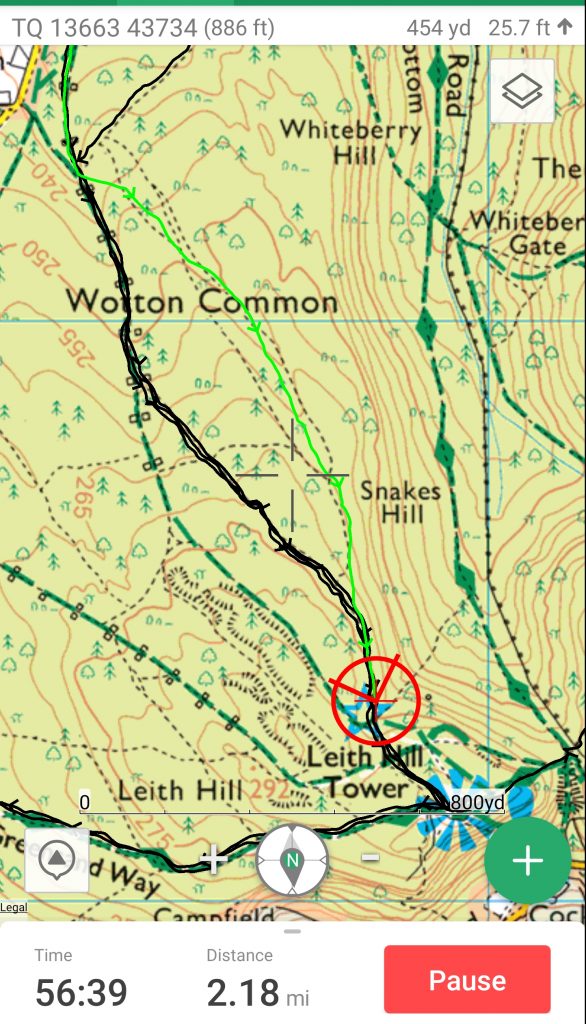 It didn’t matter – frankly if you keep going uphill in these parts, you’re bound to reach the right place; and actually it was a rather fetching little track we found. Eventually we reached the tower. 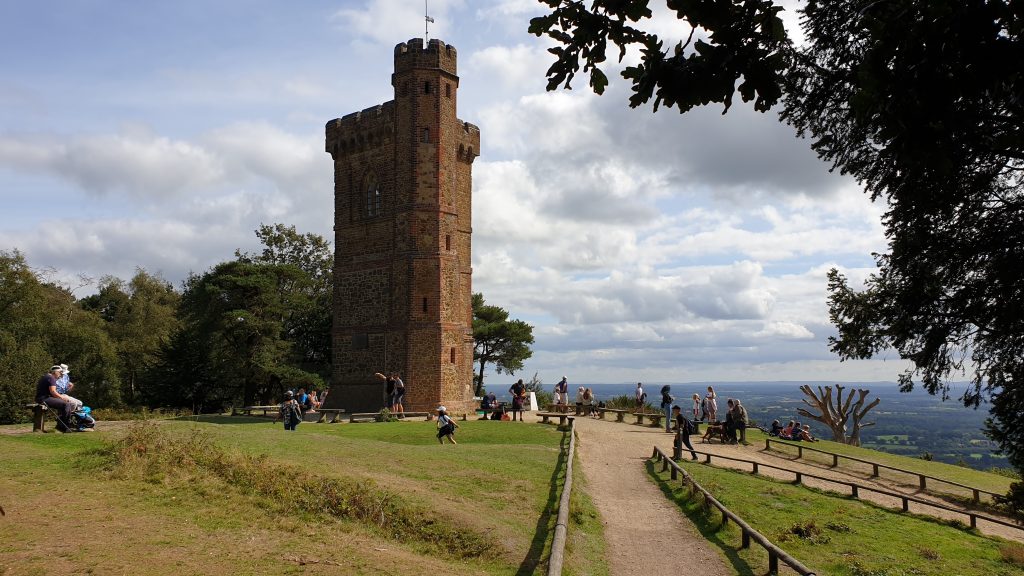 It became clear that (a) many other people had had the same idea as us (no surprise, as this is a hugely popular weekend spot) and (b) the little cafe in the base of the tower was open (this was a surprise, as we’d thought that the pandemic would have scuppered That Sort Of Thing, but we’d clearly underestimated the National Trust’s competitive nature). Socially-distanced queuing, of course. 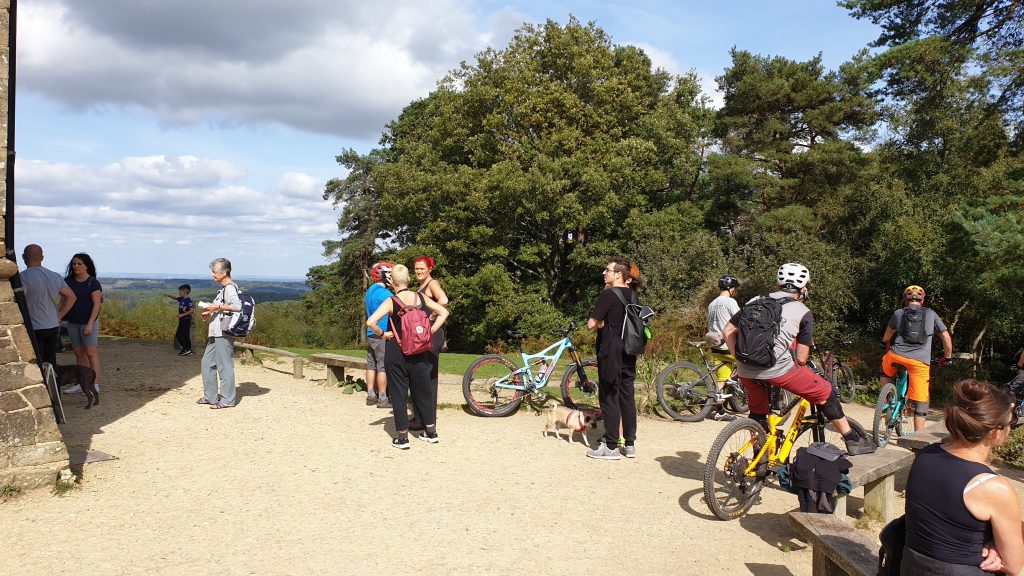 So we were able to do two important things: firstly, have tea and cake (tea of a much better quality than anything we could have expected in The Foreign); 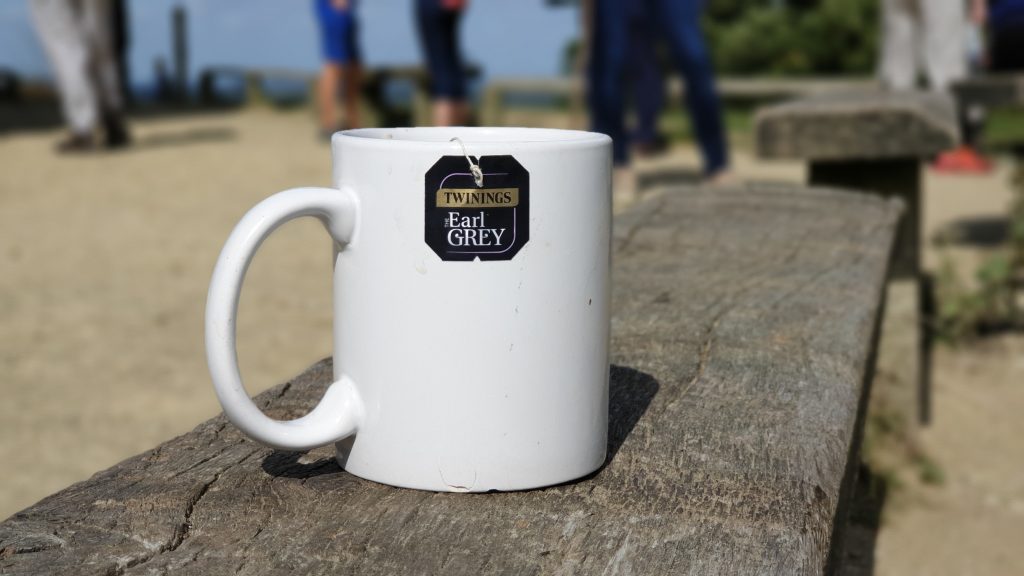 and secondly to take a picture of our Xoriguer gin bottle. 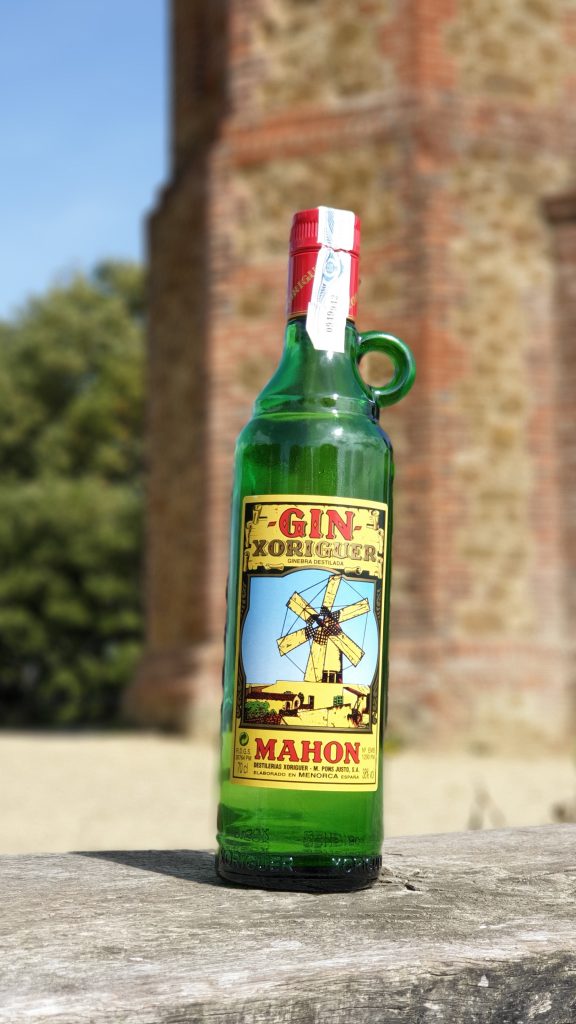 My original thought had been to make the tower a lunch stop, but since I was sure it would be closed we had to declare an emergency tea break to justify sitting down and taking in the lovely views. 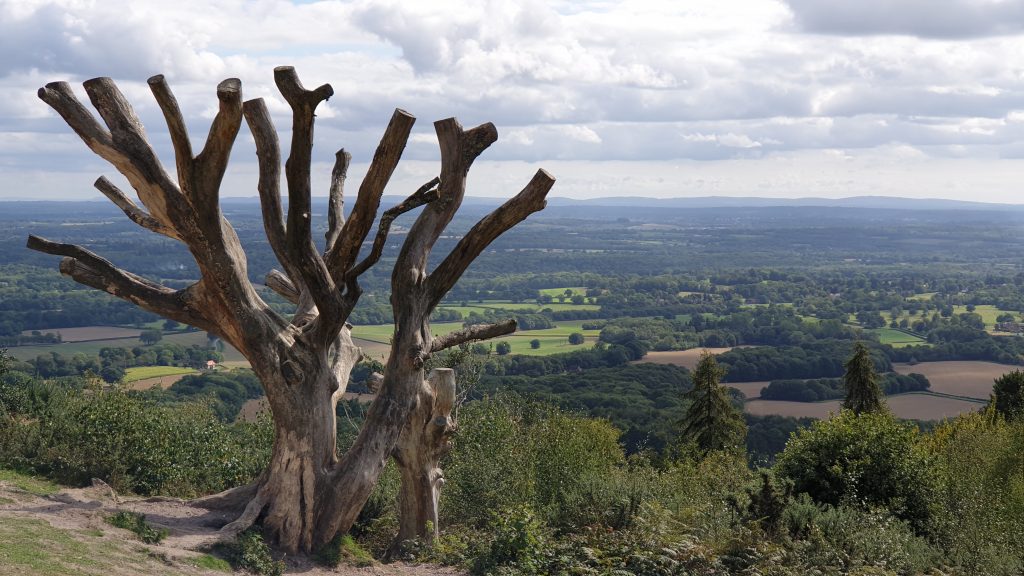 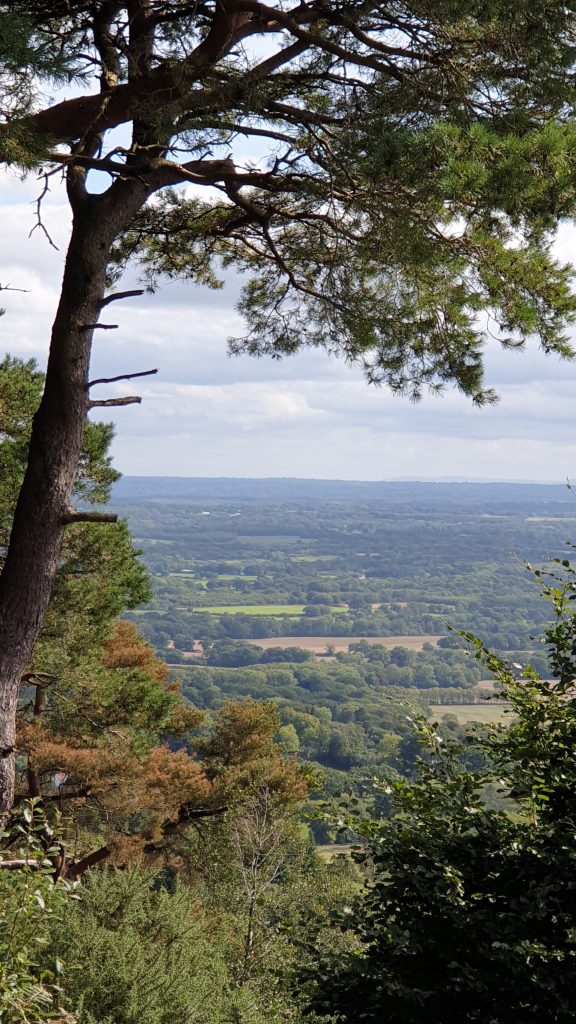 If you look carefully, you can see bits of London, like the arch over Wembley Stadium. 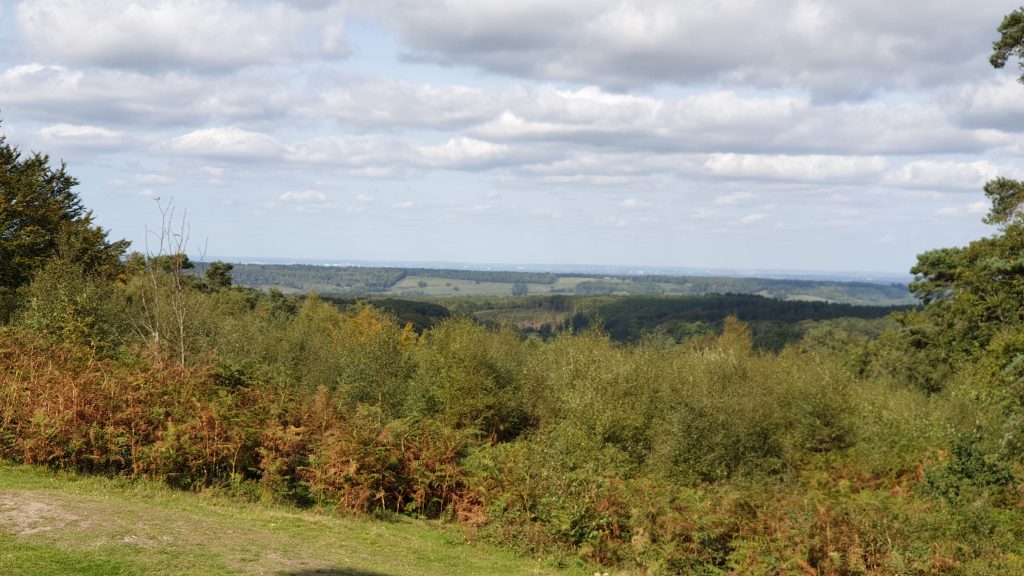 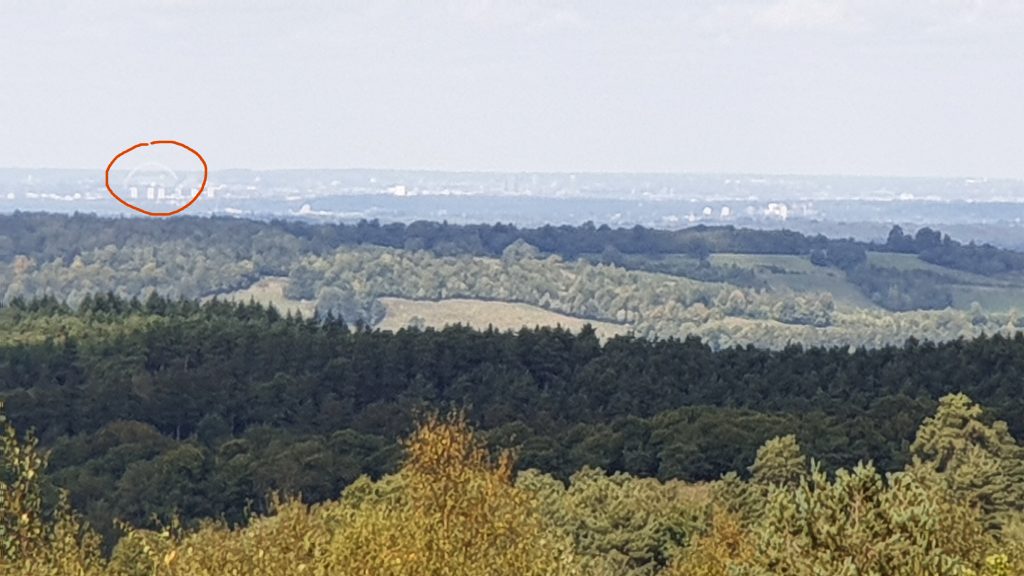 From a photographic standpoint, this is the first time I missed having a Proper Camera with a Proper Lens about my person. The phone has done remarkably well, all things considered, but a camera with a decent optical zoom would be better. So I’ll possibly take one on future outings.

Tea and cake having been satisfactorily demolished, we went on our merry way, along the Greensand Way which passes through these parts. As you can see, we only missed our way the once. 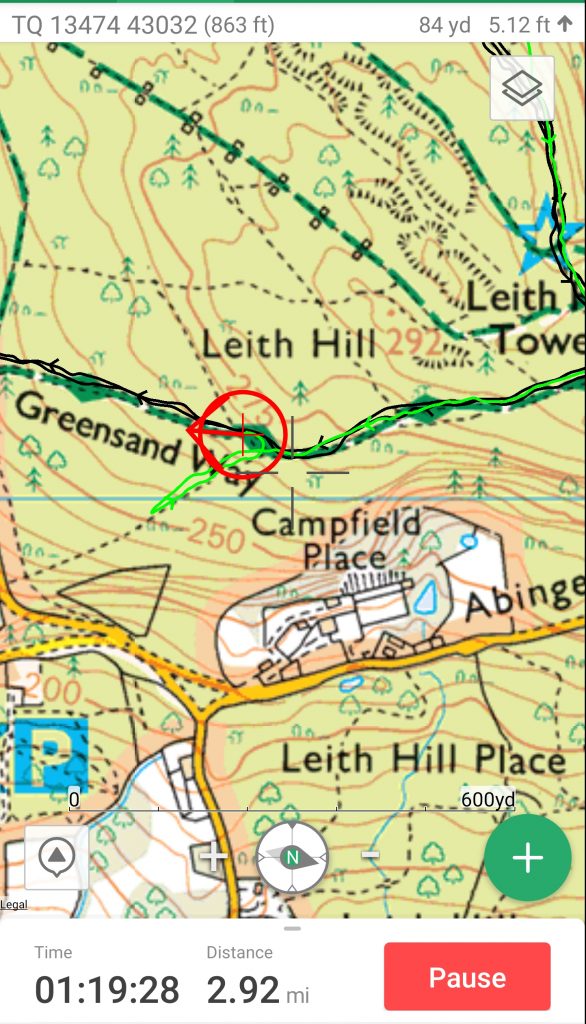 We then headed down and down until we caught sight of the next part of the route – the walk up Holmbury Hill, seen in the background here. 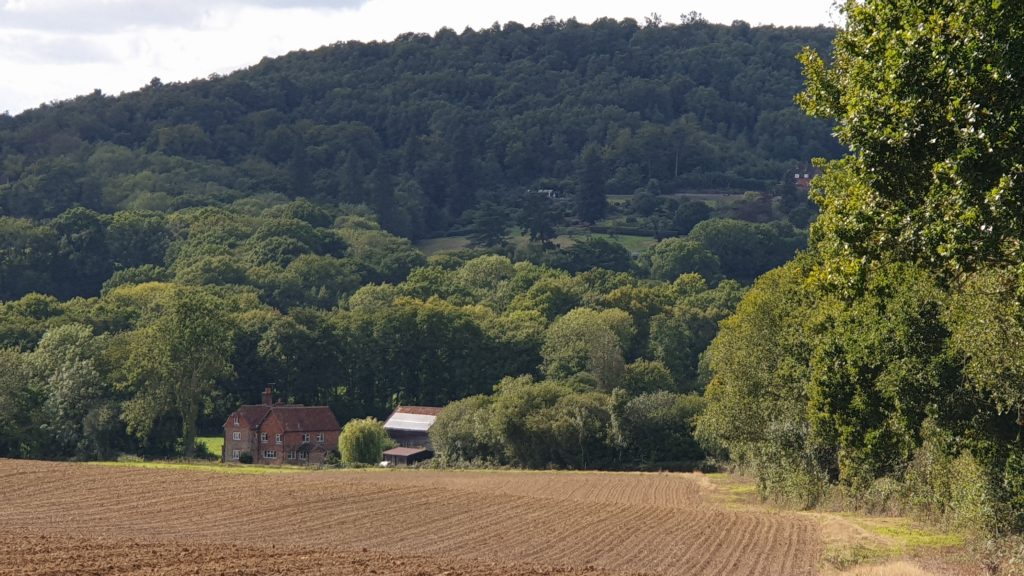 The first part of the climb is really very steep indeed. 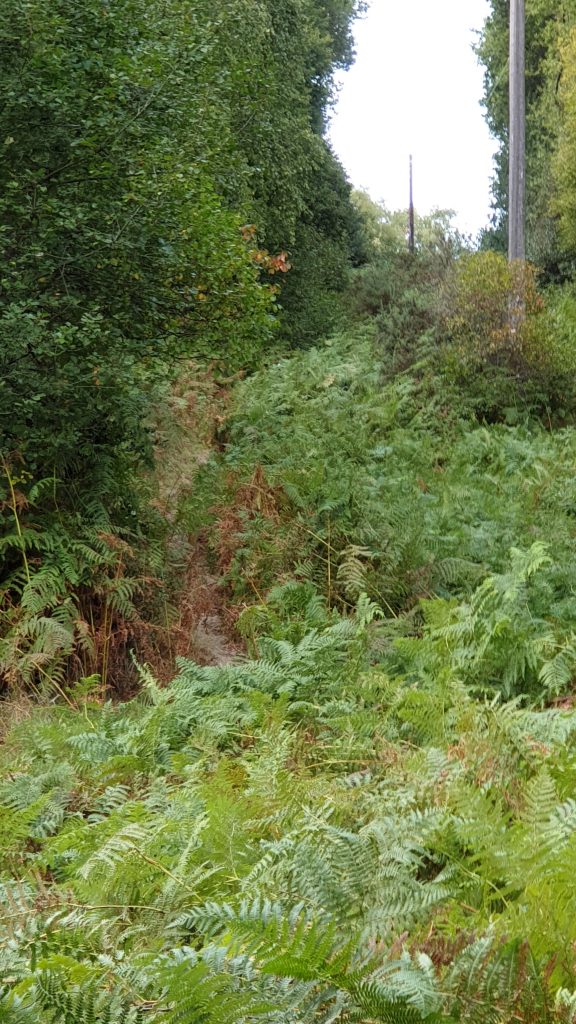 It’s very difficult to convey in a photograph quite how steep it is. You’ll just have to believe me. But we scrambled up it and made our way to the top of this climb. The route offered a choice – continue to the top of the hill, or head down to the village. For some reason, we carried on up, but before we carried on I made it clear that the recompense for this was to stop at the village pub for some refreshment.

So we made it to the top, where we enjoyed the lovely view…

… as did our gin bottle. 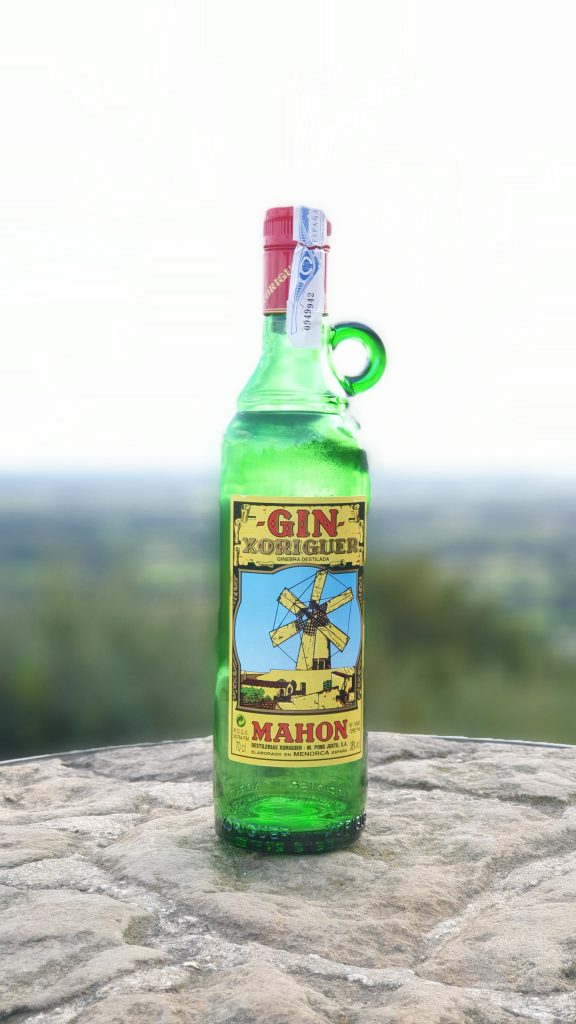 And then we headed down into the very attractive village of Holmbury St. Mary, which was a sort of Victorian experimental creation – see the history part of this description. It’s a fetching place. 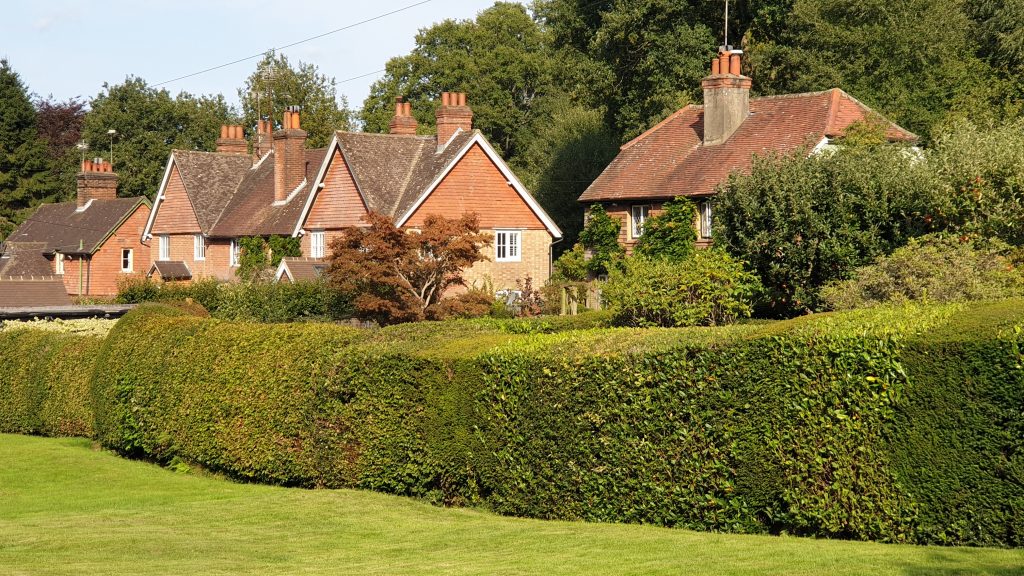 with a large church 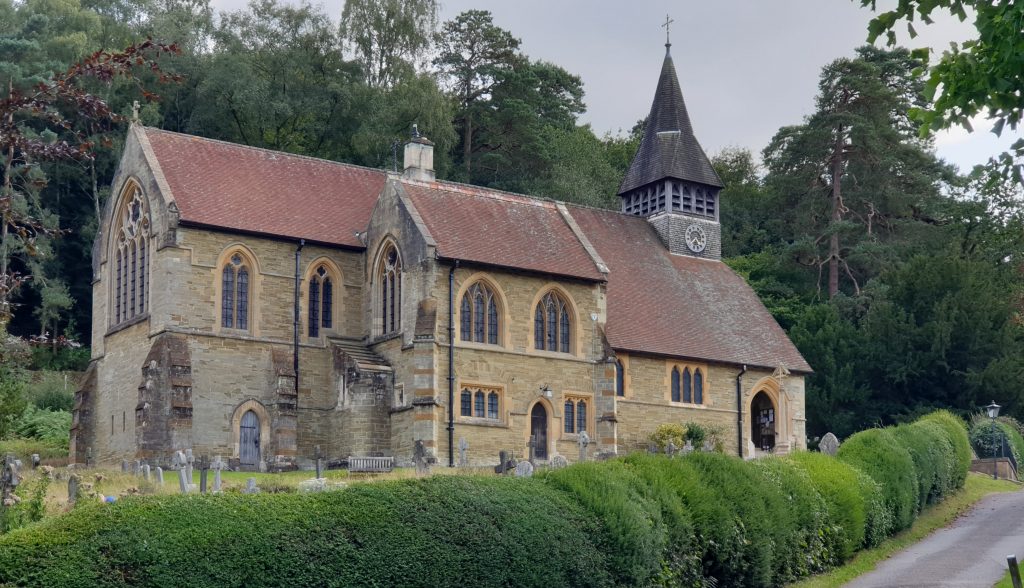 and, importantly, a pub, the Royal Oak (which brews its own beer, called Felday, the original name of the village). Part of my research had been to establish that it would be open as we passed. 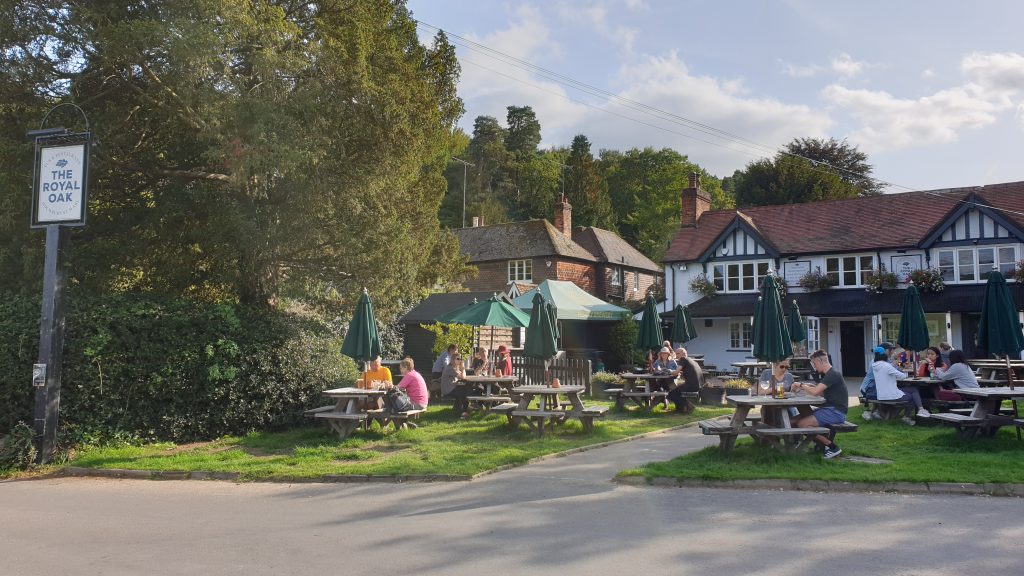 Suitably fortified, we carried on through the agreeable village on to an agreeable track which headed back to the car past some very attractive brickwork. 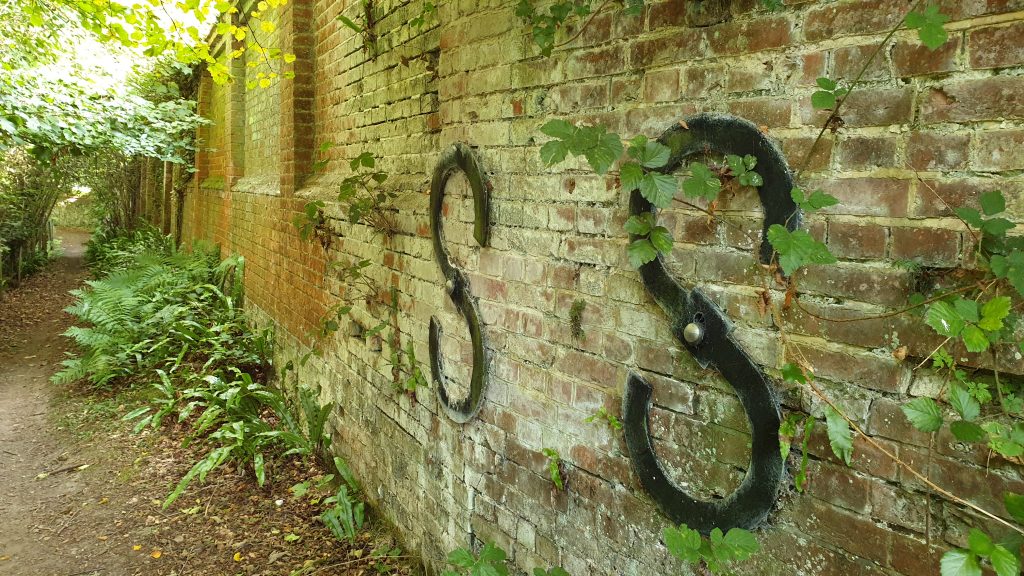 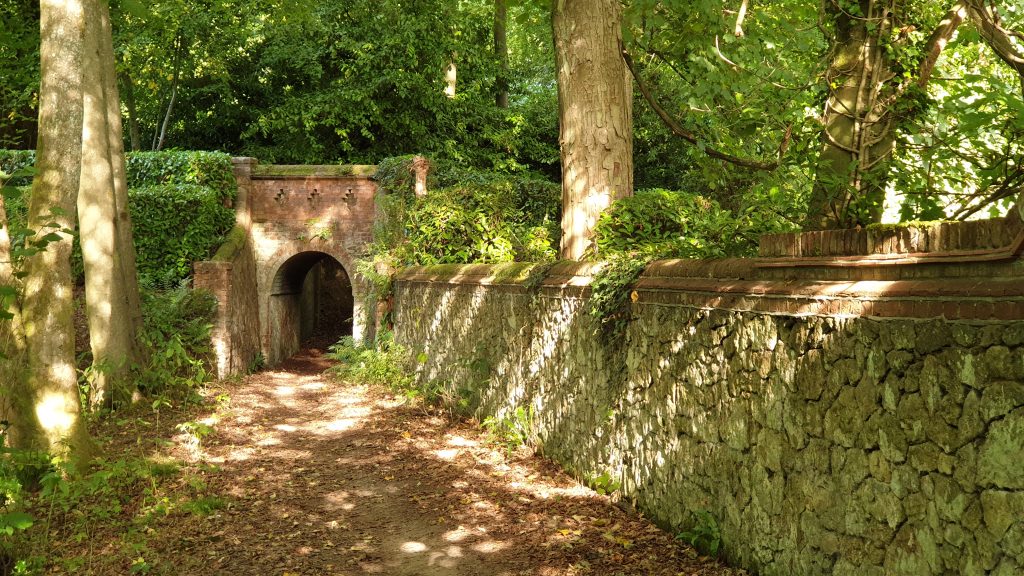 And thus ended today’s walk, at 9.03 miles just a bit longer than the Menorcan equivalent stage. The weather had been perfect – sunshine, around 20 degrees C – and the walk had been very pleasant. More to the point, we were unscathed and so should be able to take on tomorrow’s more modest challenge – a 6-mile walk, which we’ll do on paths around where we live so that we can go off for lunch with friends afterwards. It’s a lovely walk, around Chobham Common, so I hope you’ll come back and Read All About It tomorrow. Bye for now….