September 23rd. At bang on 0600, the engines of the Perla roared into life and sleep thus became impossible. To be fair, we were warned in the information we got that there would be engine noise, and so had packed the recommended earplugs. But they were in my spongebag rather than my ears, and less effective therefore. I shall not hesitate to use them should we be moving at night.

The mission of the day was to get to Brač before the weather closed in – Filip was talking about northerly gales, and I trusted his information sources (Tom, our skipper) better than the BBC Weather App which was forecasting showers and a north-easterly stiff breeze. Anyhoo, Tom put the hammer down and we were off!

There was one break in the journey, to visit the island of Korčula, which is a couple of hours’ motoring from Slano. This gave us time to suss out the breakfast, which was nice but made me very glad about all those Twinings Earl Grey teabags we’d packed, and then we were being ushered off the boat to meet local guide Željka. If nothing else, at least week one had prepared me for being able to spell her name correctly. It became clear that much of the (perforce) short visit was going to be spent in the local museum, which Filip had arranged to be opened especially for our group, which was a nice touch. However, faced with a new and handsome town, 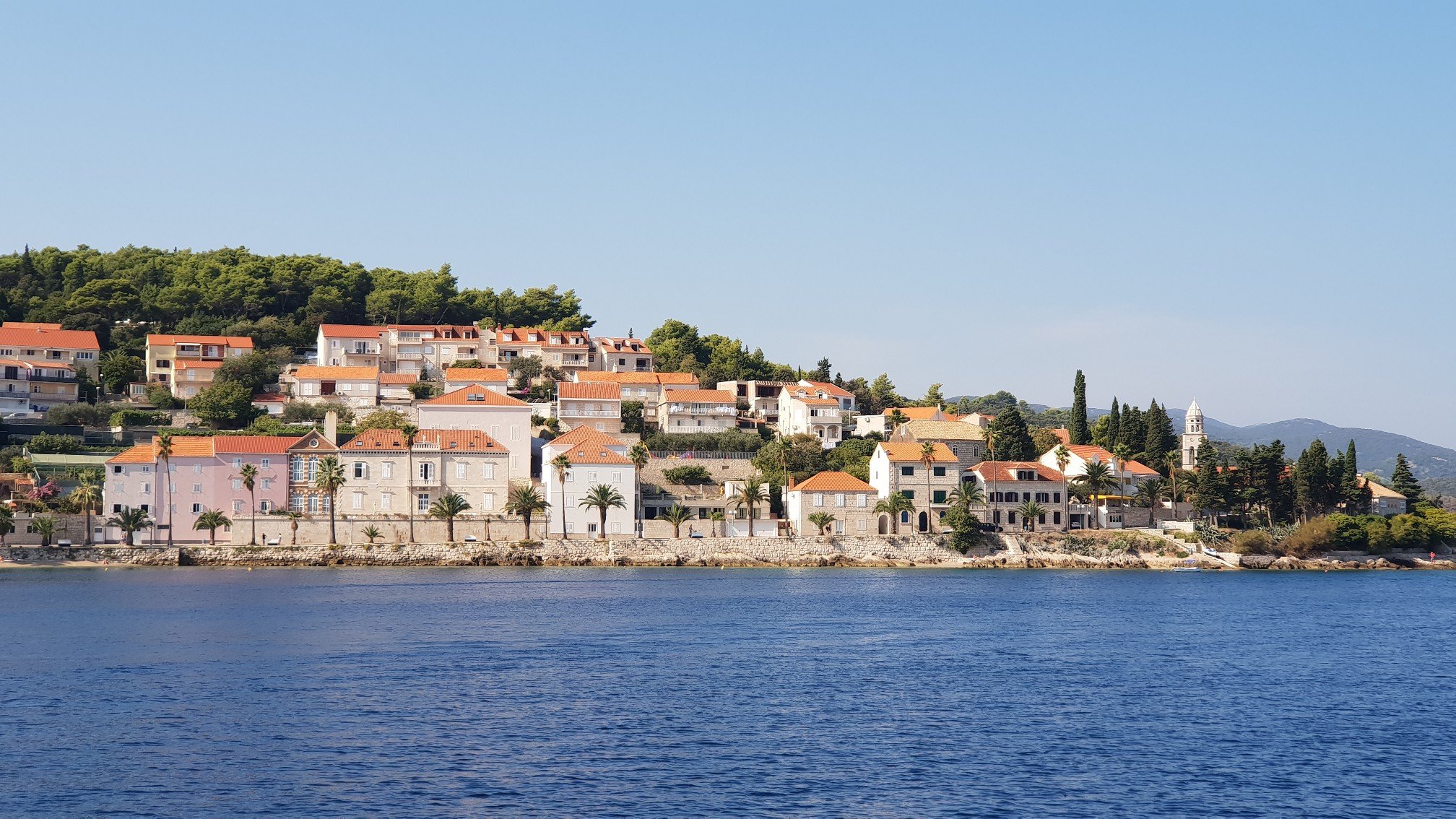 and with camera in hand, my thoughts tend not to turn to museum visits, but rather to pottering around looking for nice scenes. So we excused ourselves from the rest of our group and wandered about, trying to find parts of Korčula town which were not full of Asian tourists taking selfies. It’s a small town, so this wasn’t altogether straightforward. But we managed to find some scenes which I hope you agree are reasonably photogenic.

Very near the quay where Perla was moored is a handsome staircase which was part of the old city’s walls (much of which are still intact). 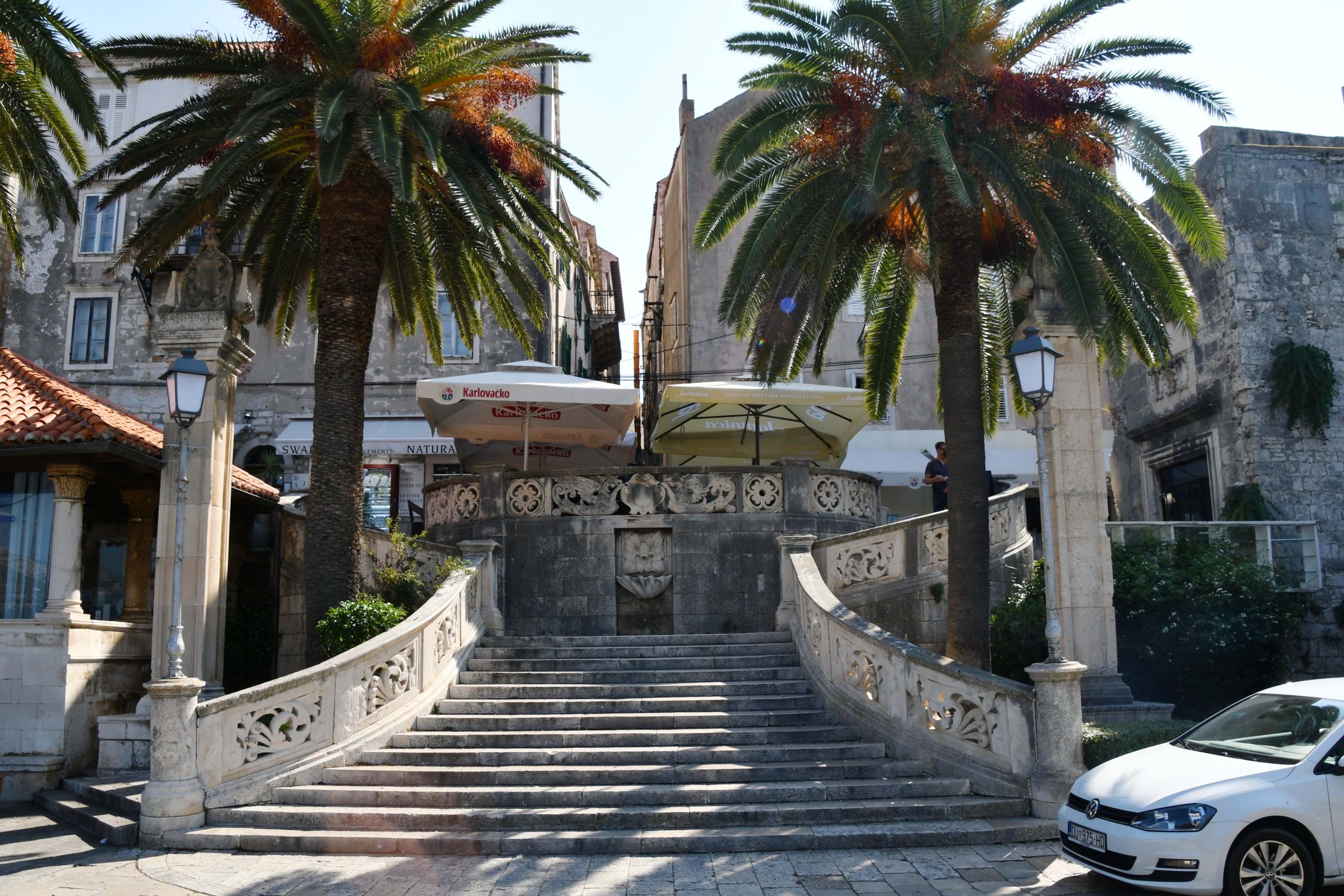 The top debouches on to the cathedral square, which would have made a lovely photo were it not for the hordes of people there. Adjoining this square there is a another, smaller one 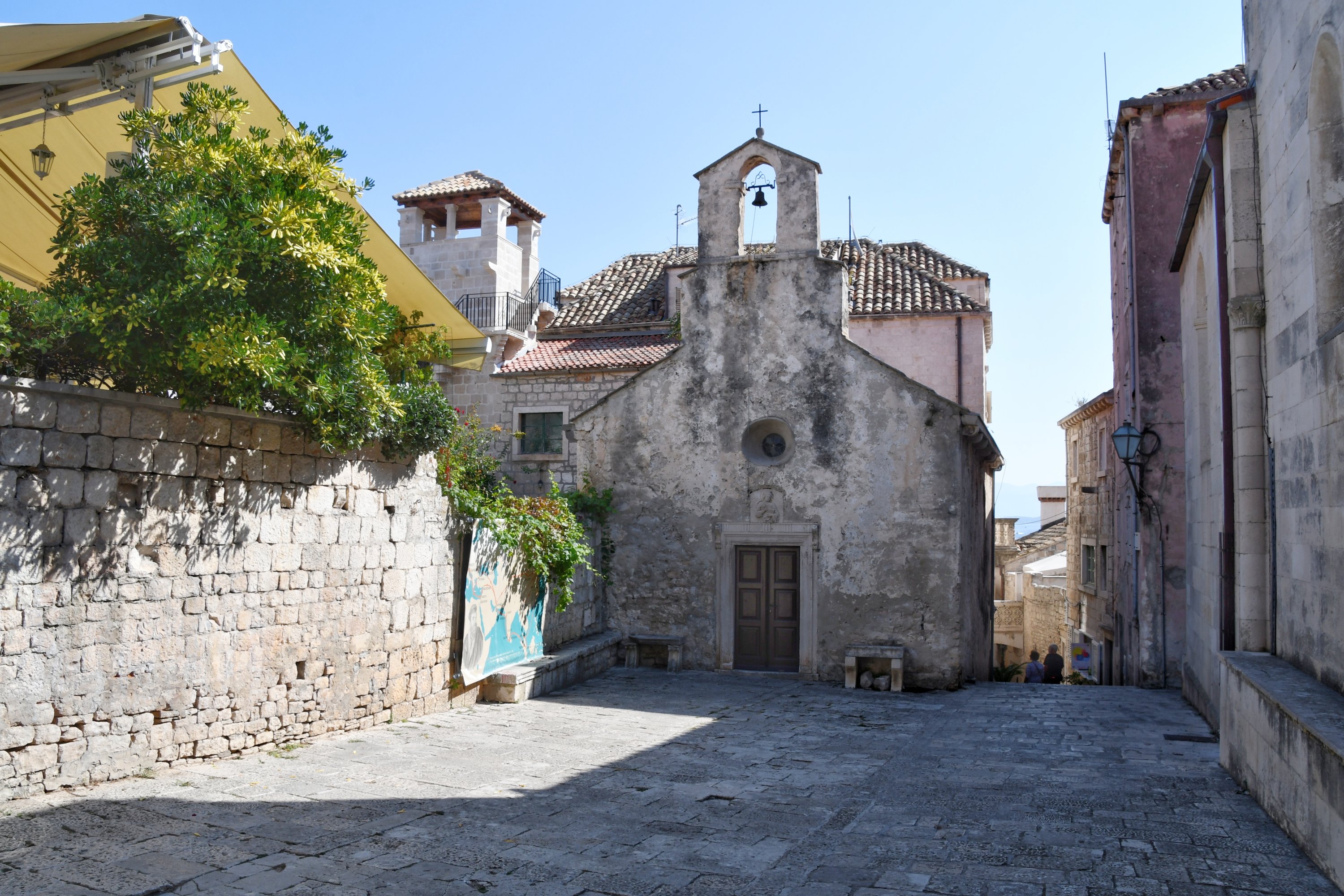 which took several minutes to photograph, as I had to wait for the oriental tour party to move on.

Just off the cathedral square is an art shop, which has a captivating display on the outside walls. 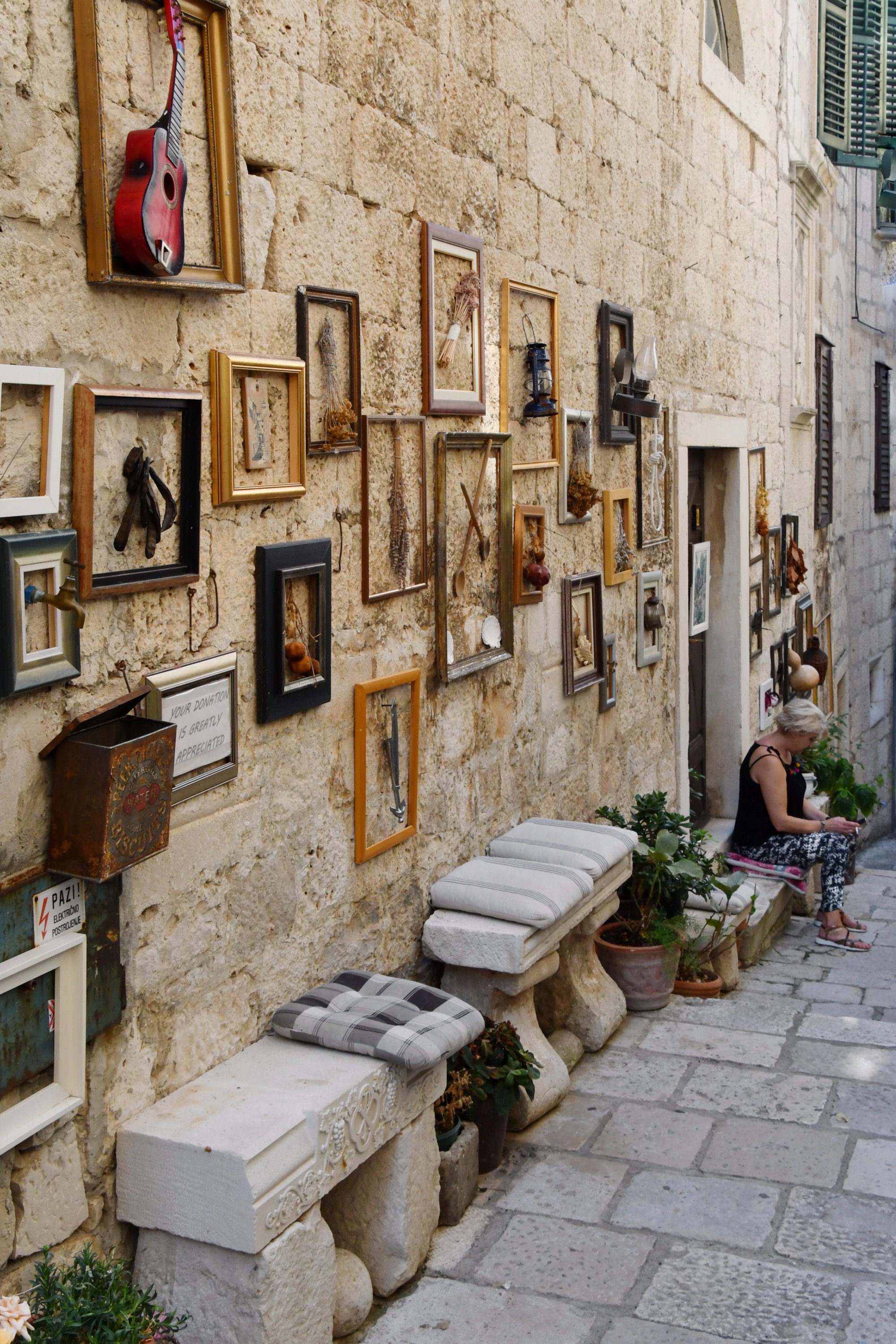 We’re not sure whether they’re for display or for sale (though I’d hazard a guess at the latter), but it’s a lovely way to display items to get people’s attention.

We did pop into the cathedral, but only for a few seconds as someone scolded Jane for wearing shorts, so we apologised and beat a hasty retreat. I felt somewhat aggrieved on Jane’s behalf, as there were ladies inside with skirts far shorter and men in shorts, none of whom were being berated. I suppose that the modern thing to do, having taken offense on someone else’s behalf, is to stir things up via a social media shitstorm with a catchy hashtag – #handsoffmywifesshorts, or something.

Anyway, we wandered on and discovered, radiating out from the cathedral square, several narrow lanes along which you can clearly see evidence of the lives of ordinary people being lived, alongside the inevitable cafes and restaurants. 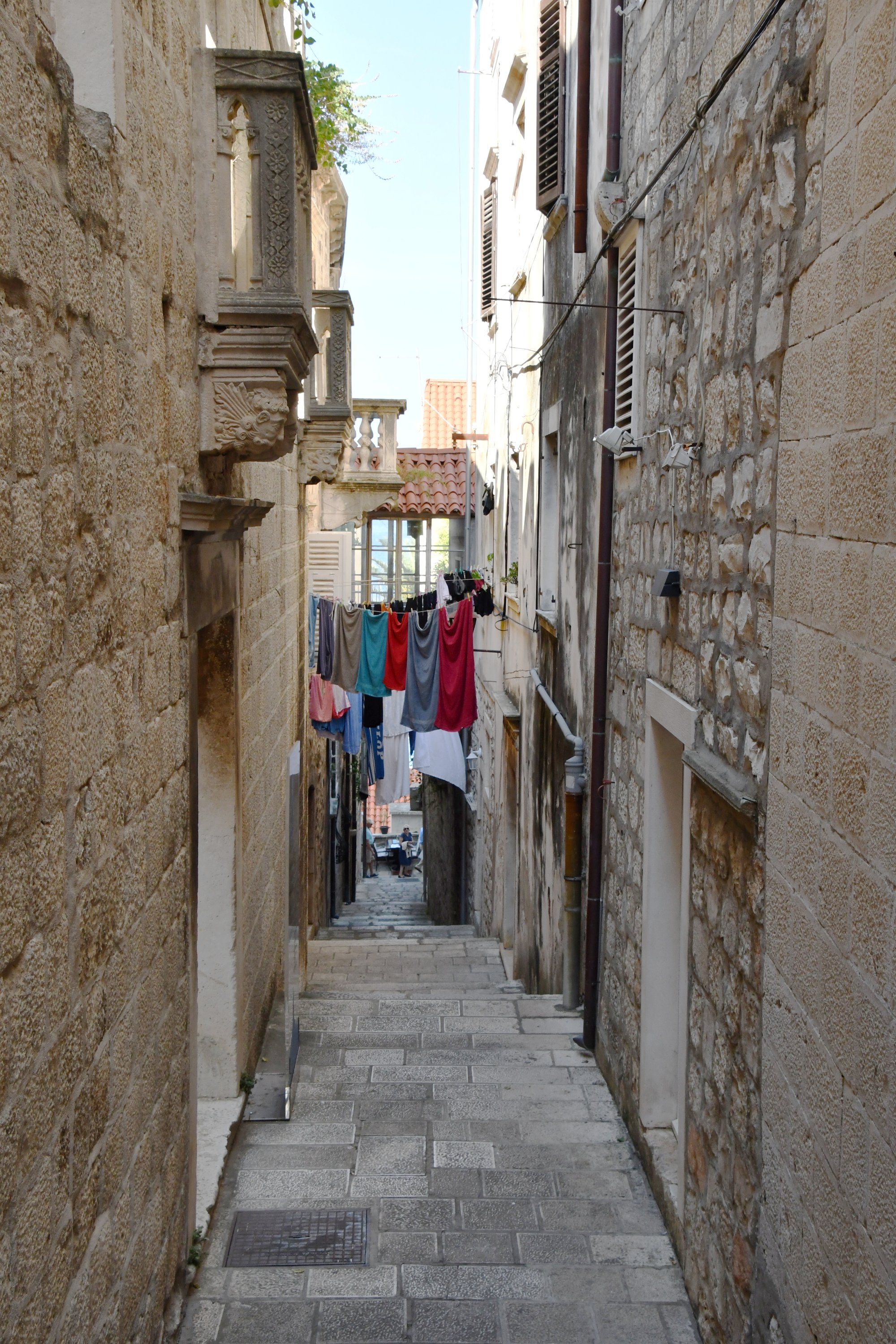 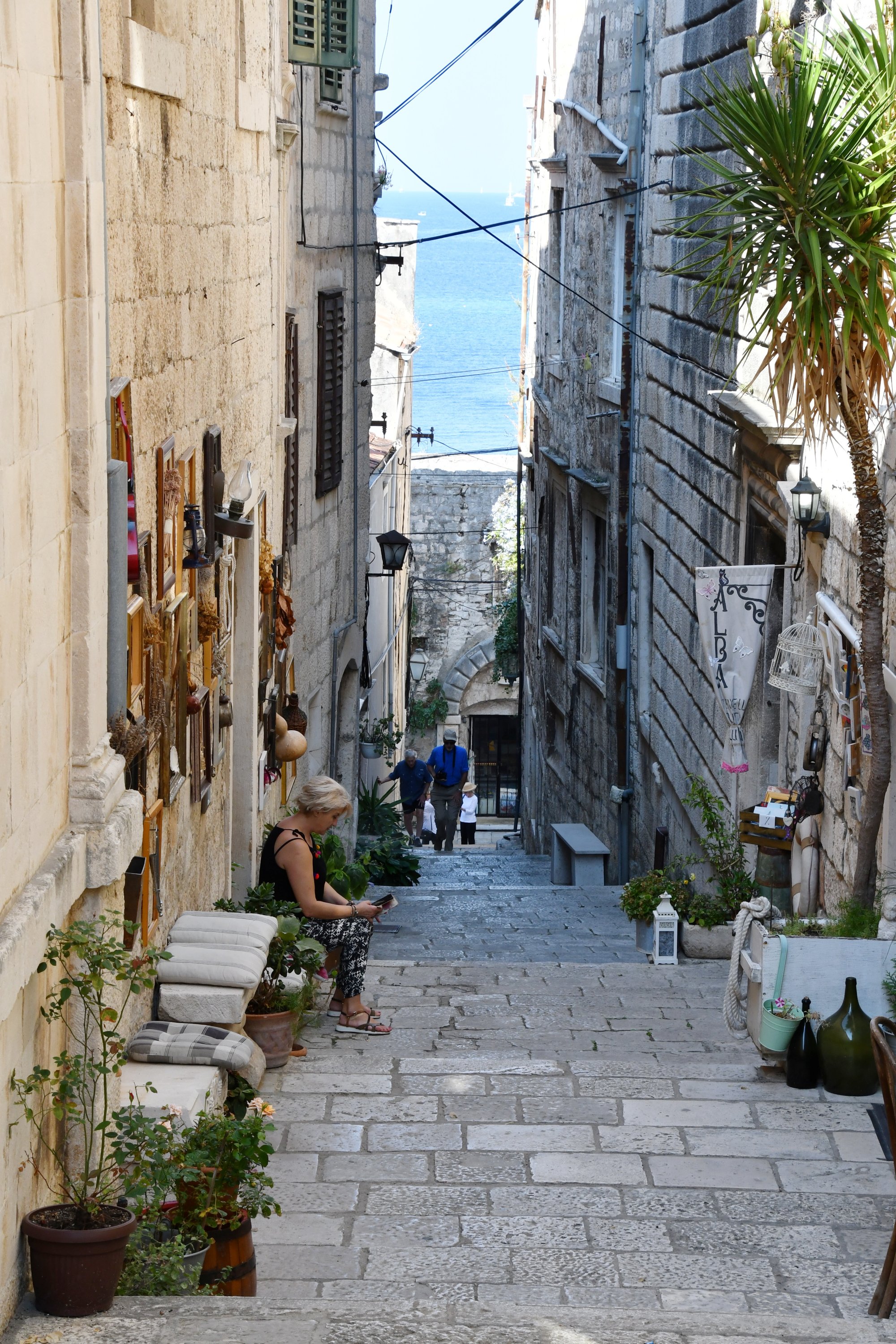 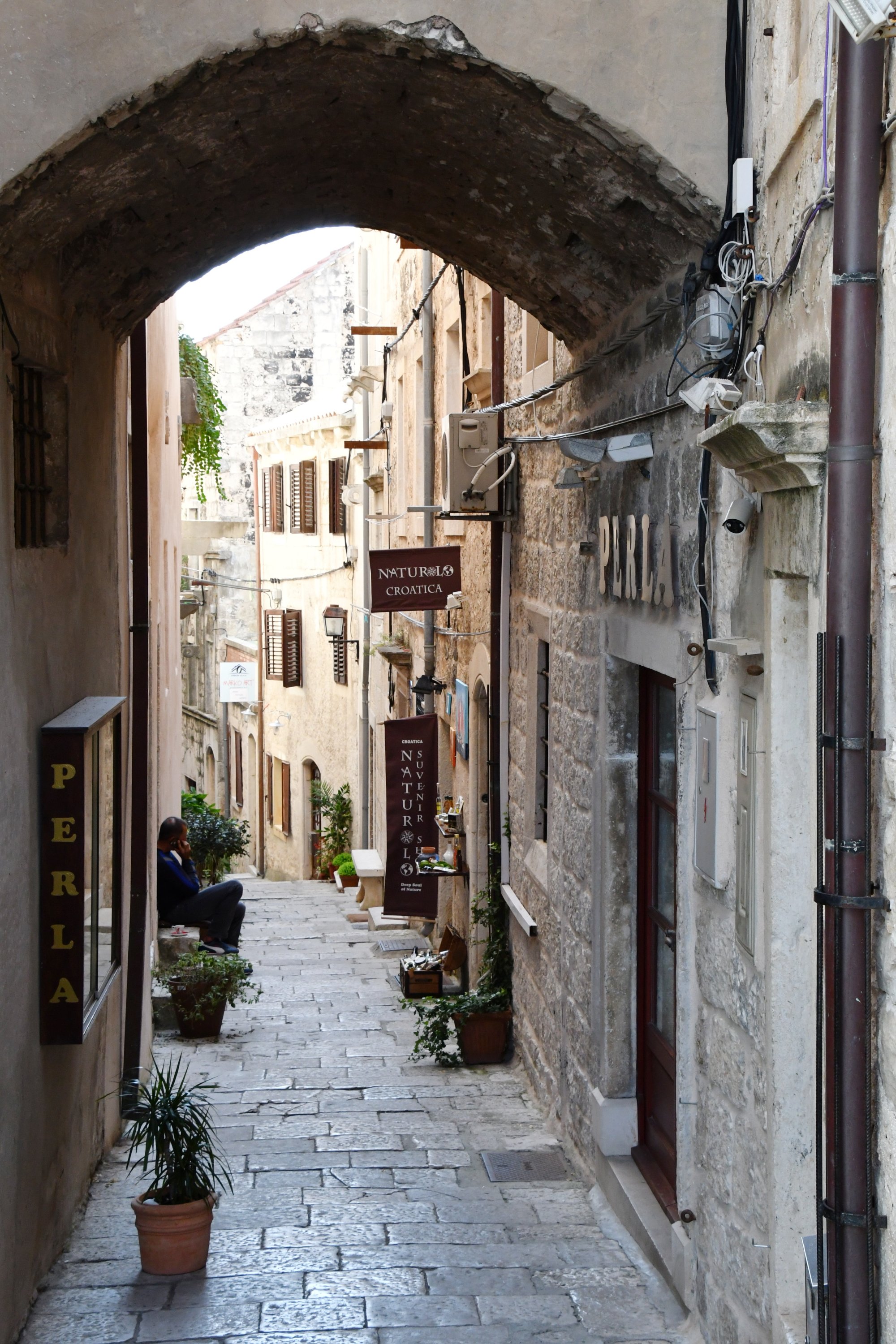 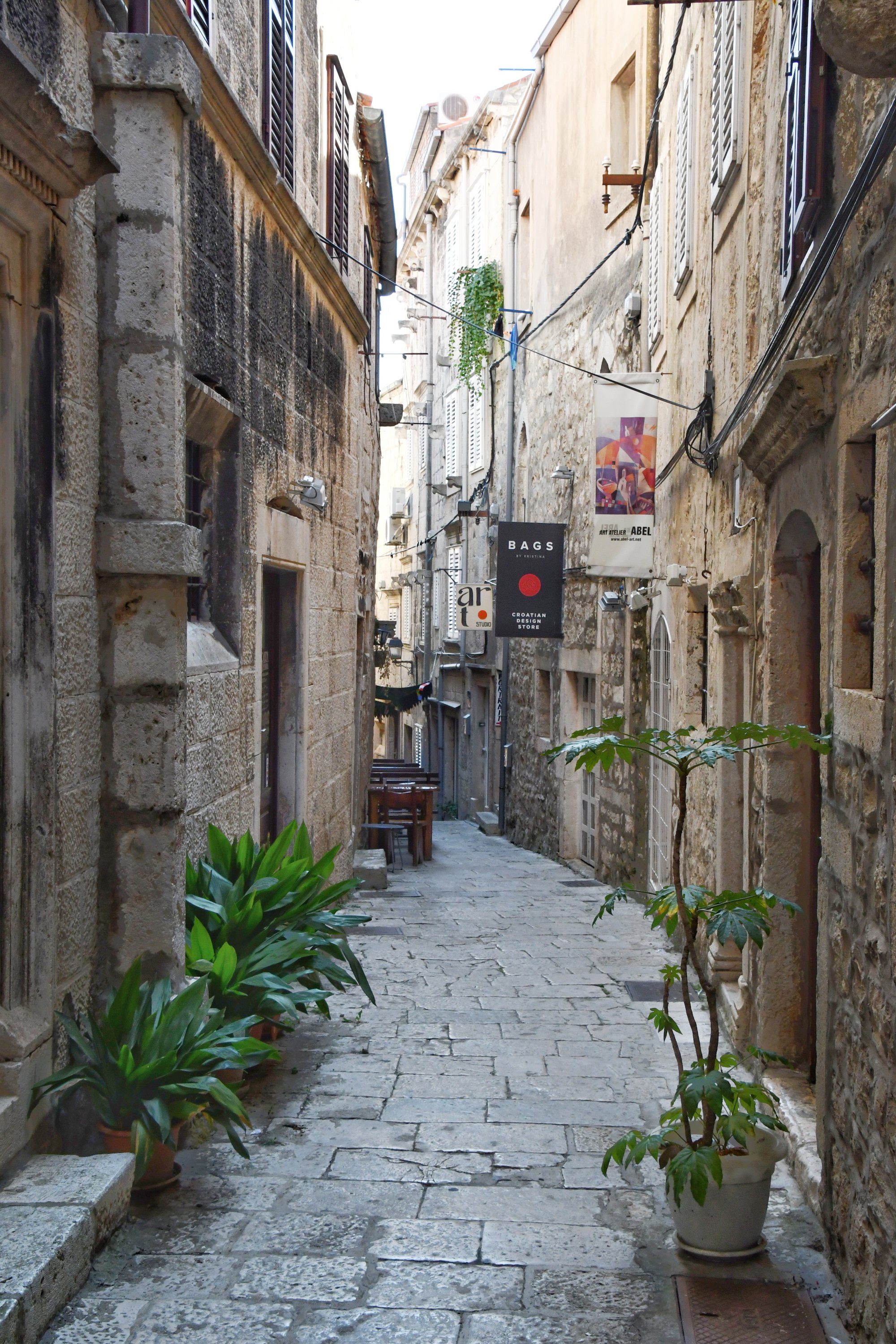 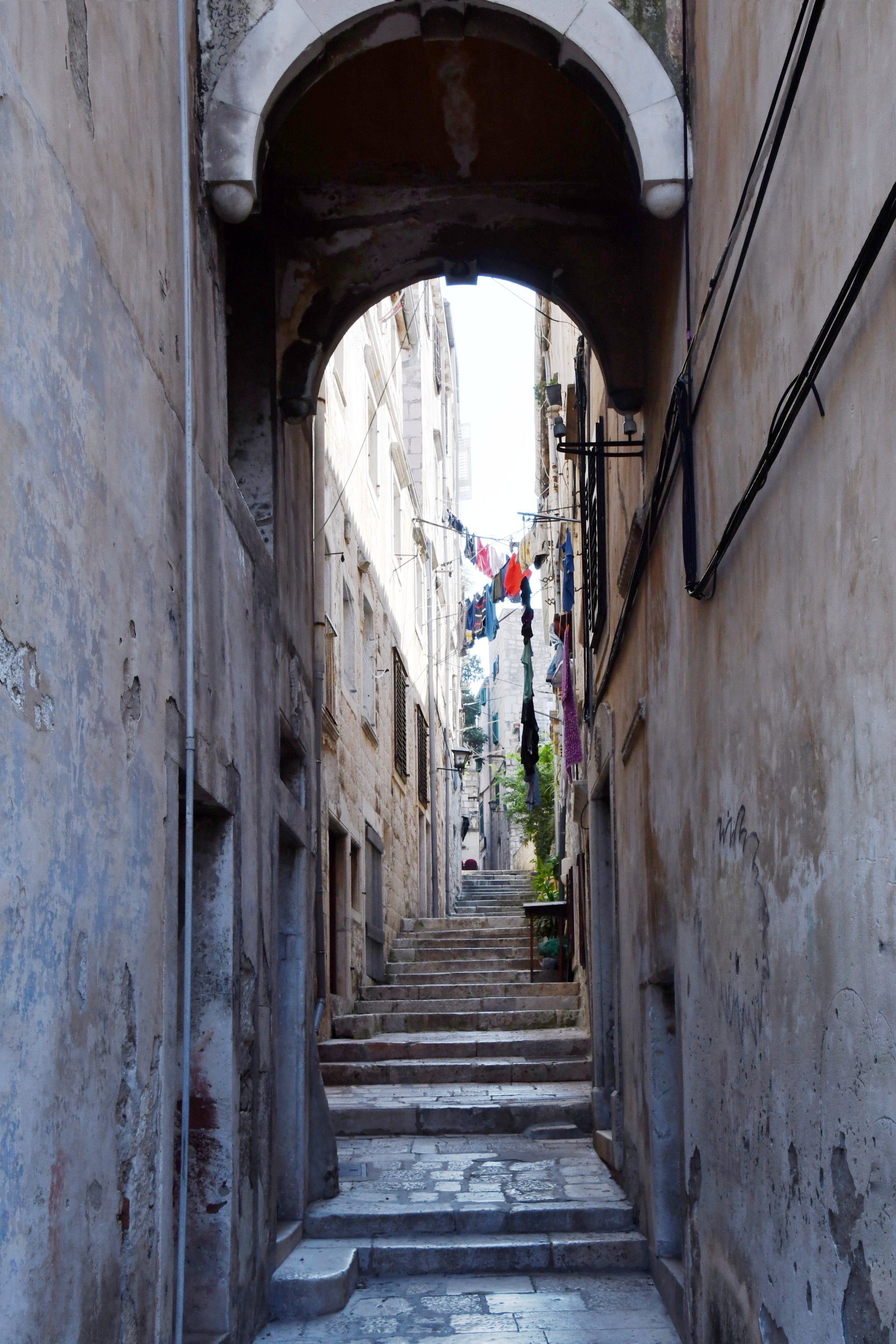 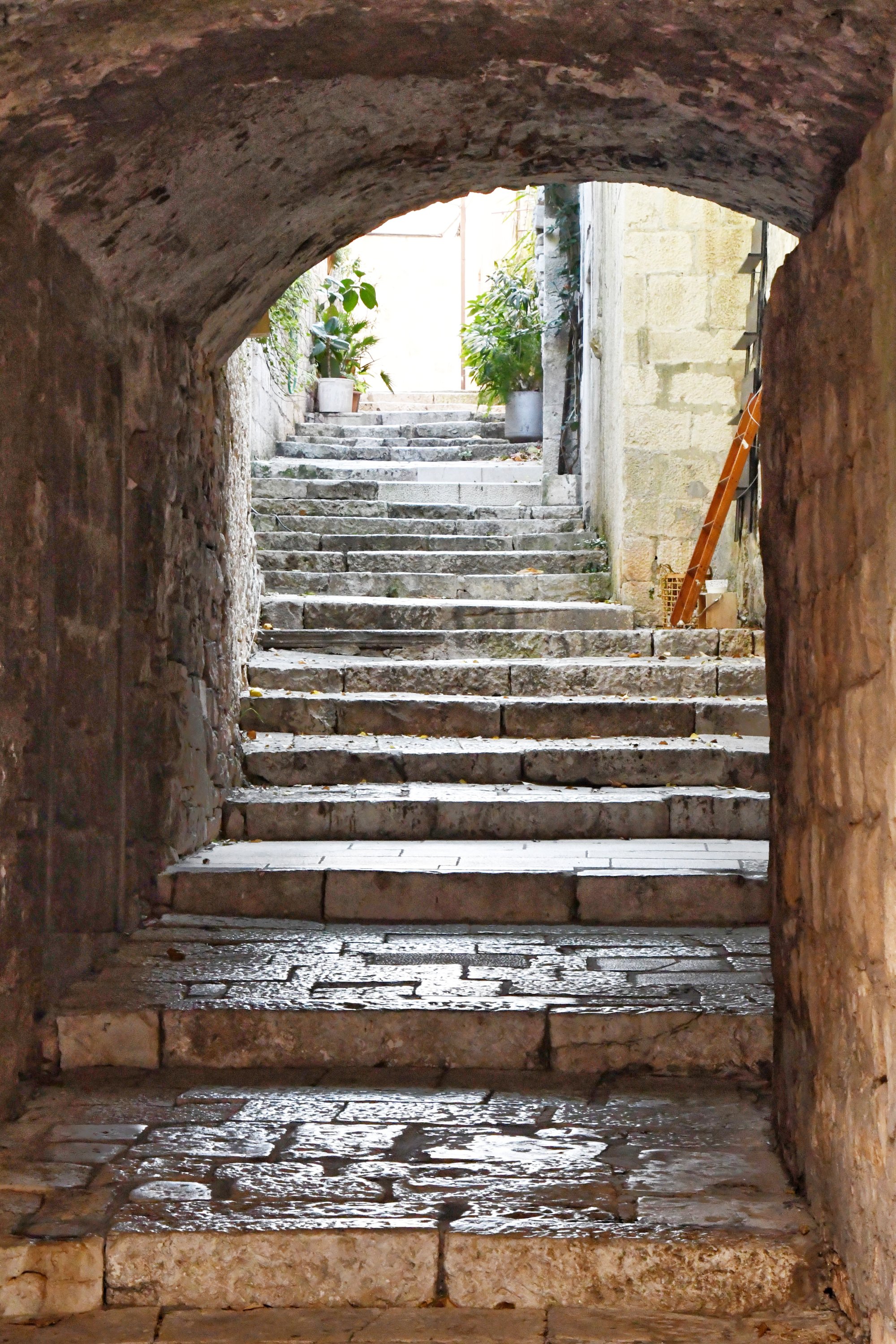 All in all, Korčula town is a very agreeable place to potter around for an hour or so and I could have spent longer getting some more imaginative shots. But I hope that these give you a flavour of how pleasant the place is. 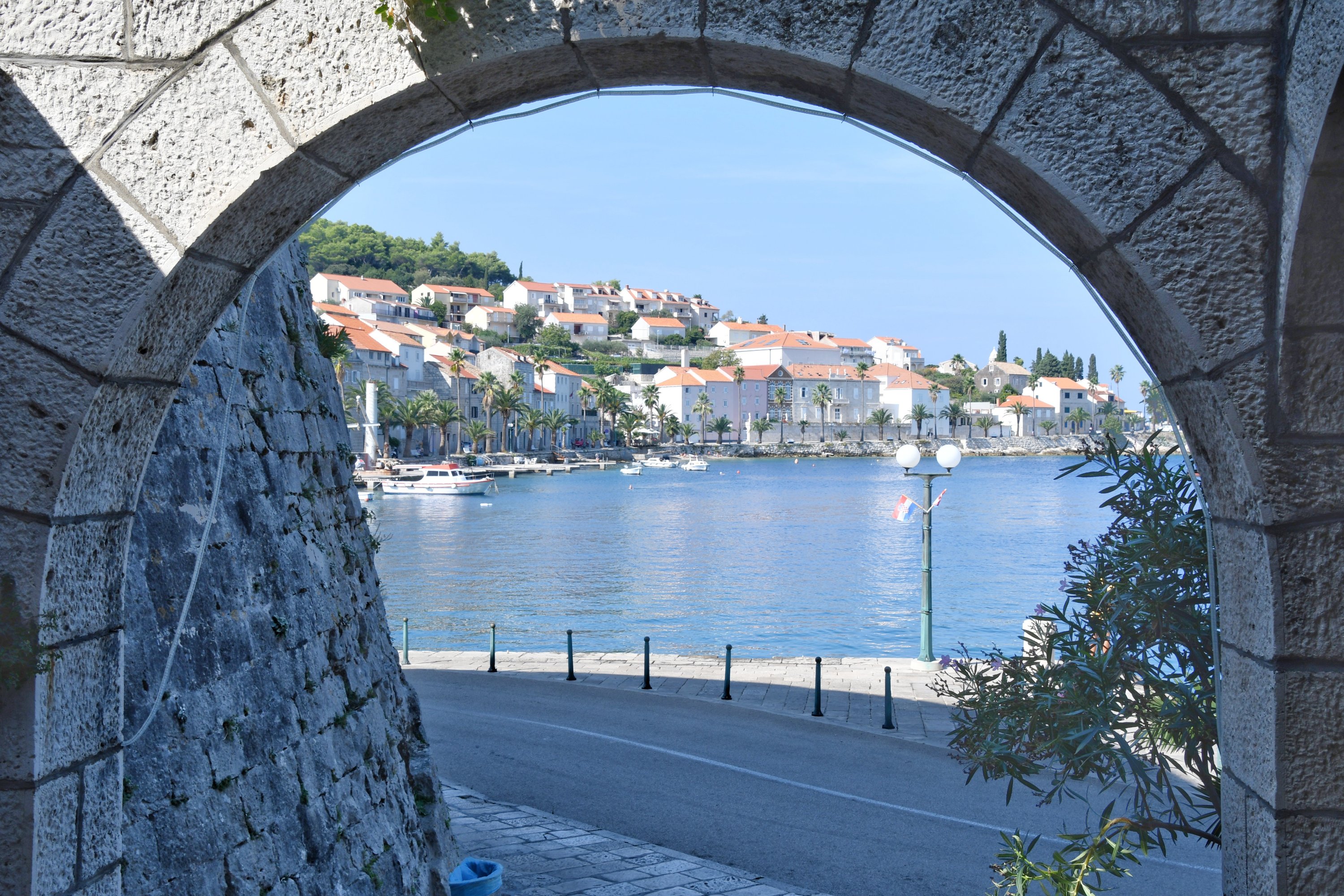 Next stop – Brač. In our previous week, we visited Bol (the principal town on the island), but our target today was a different place, Milna, which we thought would be just this little place and a venue for a meal out on the town. 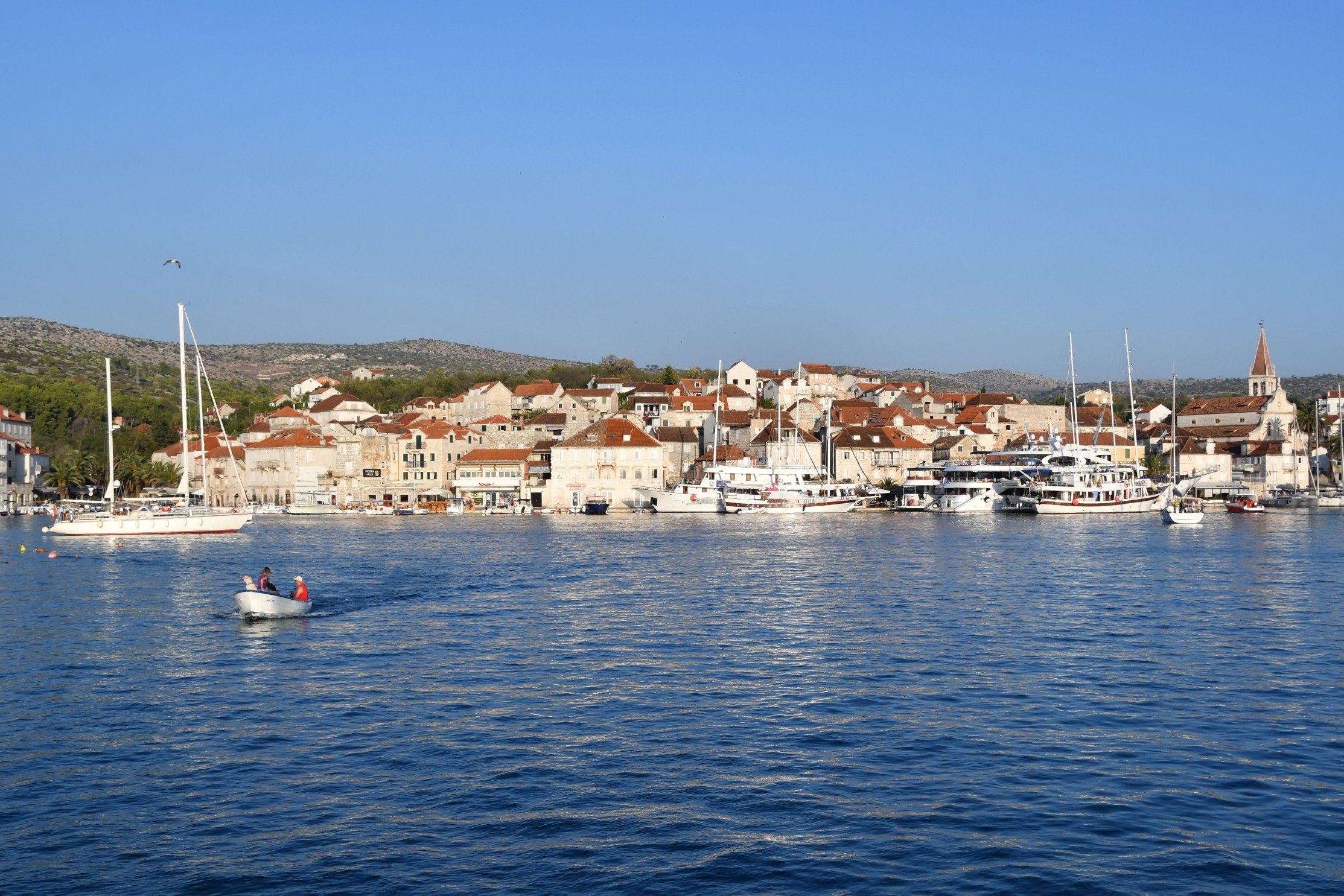 The reality was a little different, and the weather played quite a part in this.

As we approached Milna, an interesting landmark was a sunken boat which was being supported by salvage buoys. 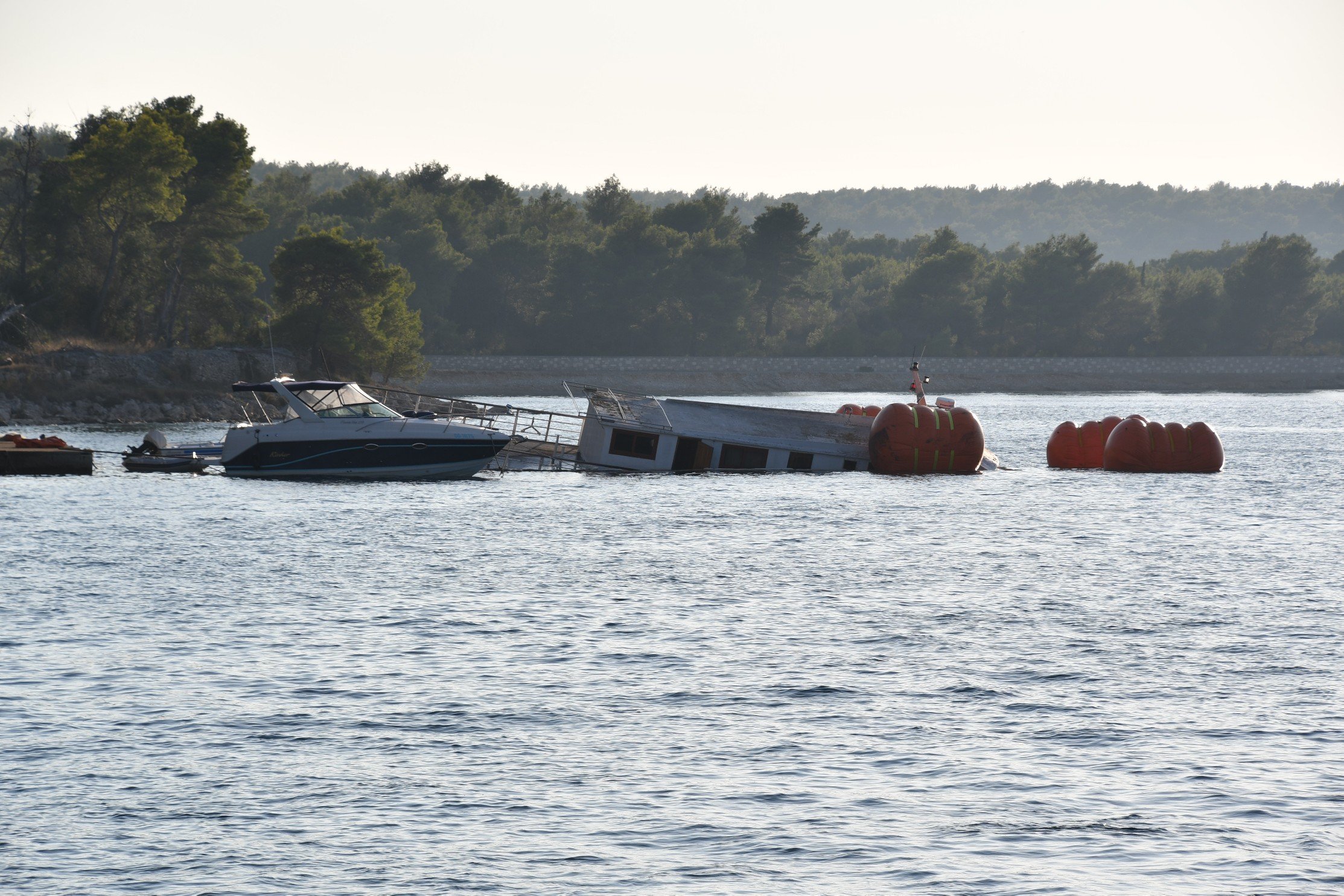 and it became clear that (a) there is a significant marina here and (b) the sailing world and his dog were headed towards it, driven by reports of the gale that Filip had mentioned – the channel in was quite crowded. Our captain had a shouting match with another vessel which clearly didn’t understand about navigation priorities under these circumstances and, as we tied up at the quay in the marina, the guy in charge there was frantically challenging all arriving boats and turning away any that didn’t have a reservation, as the marina was full. All of the boat crew said that they’d never seen it so crowded.

The late afternoon and evening light in Milna made it a pretty place. 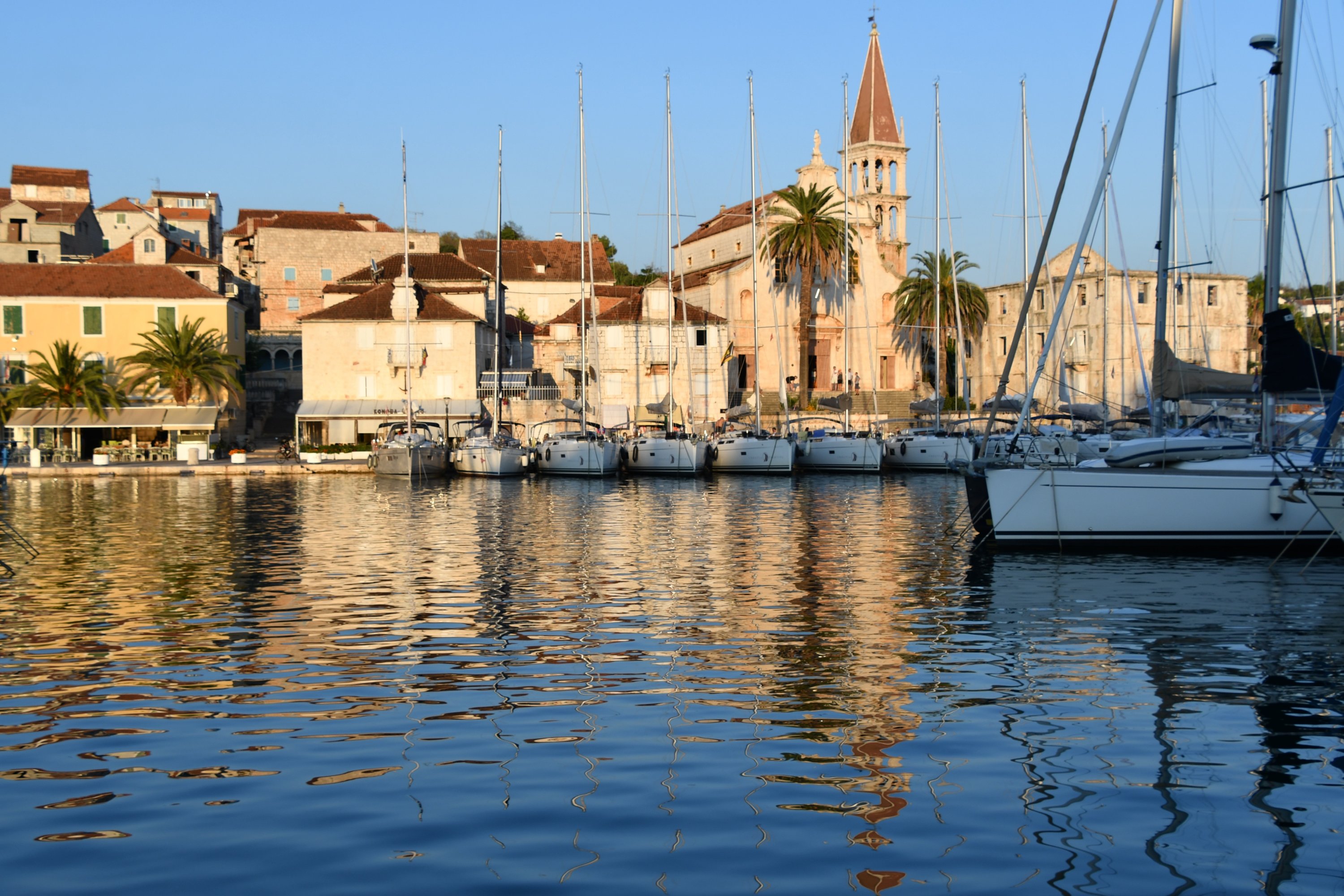 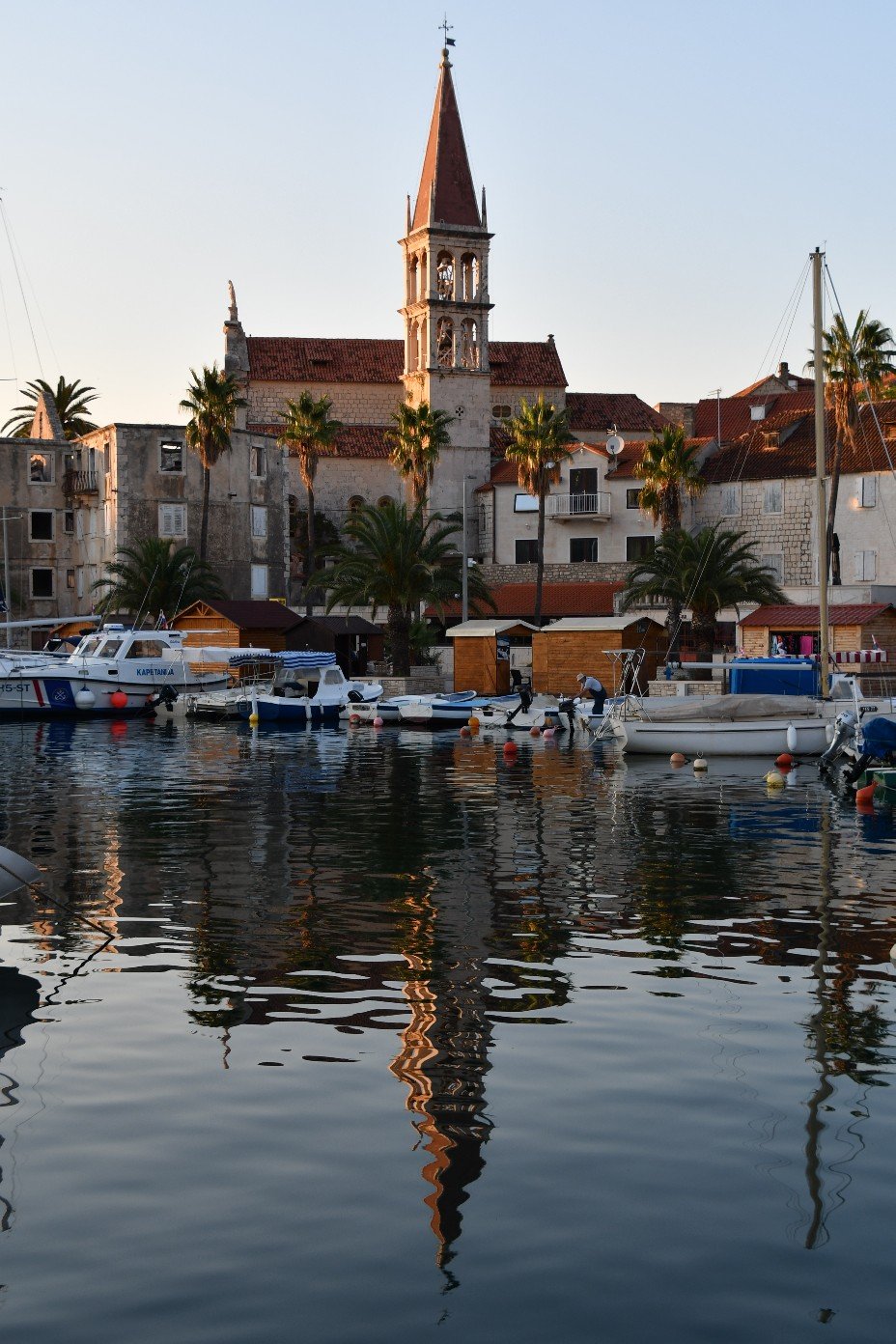 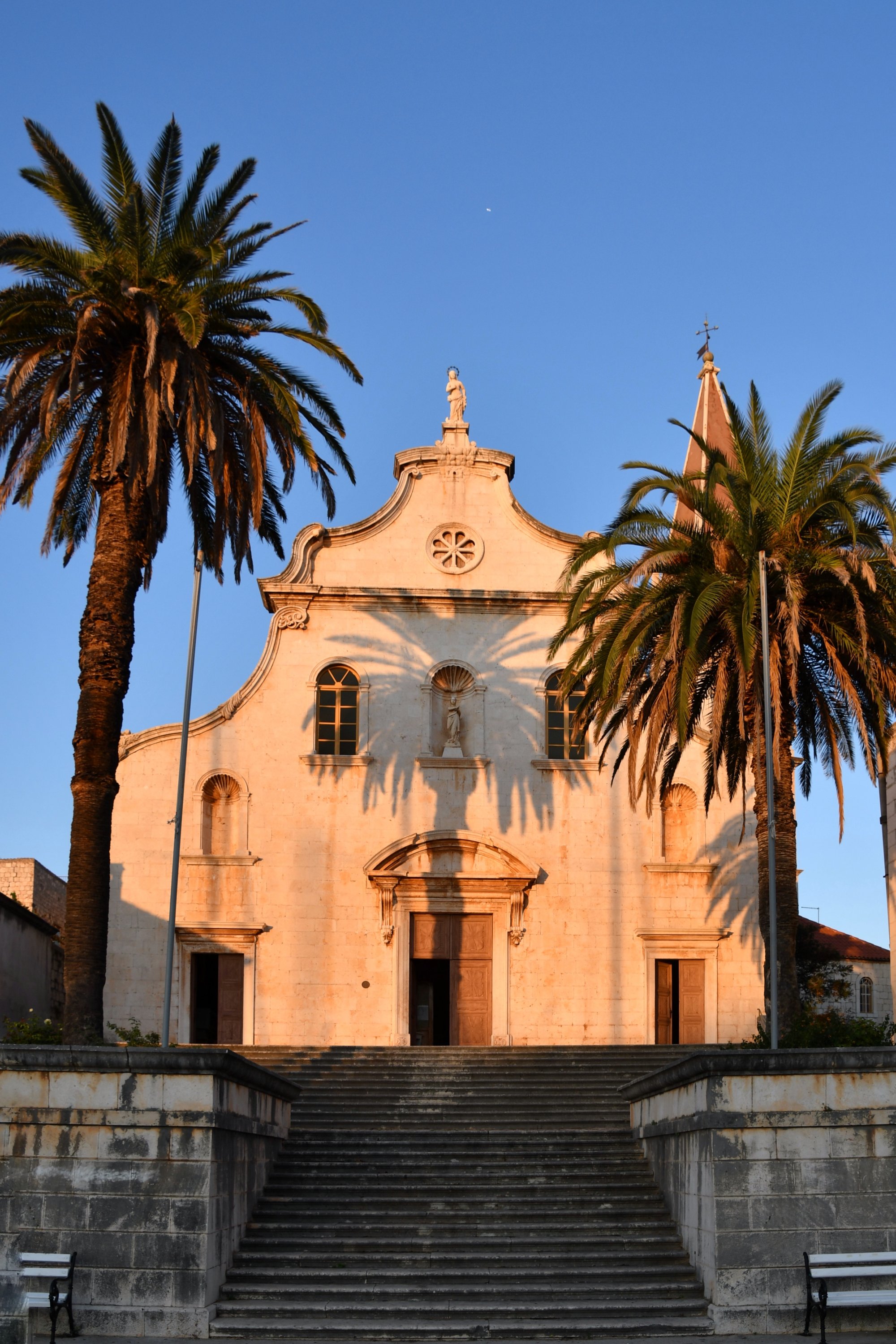 The moon was full 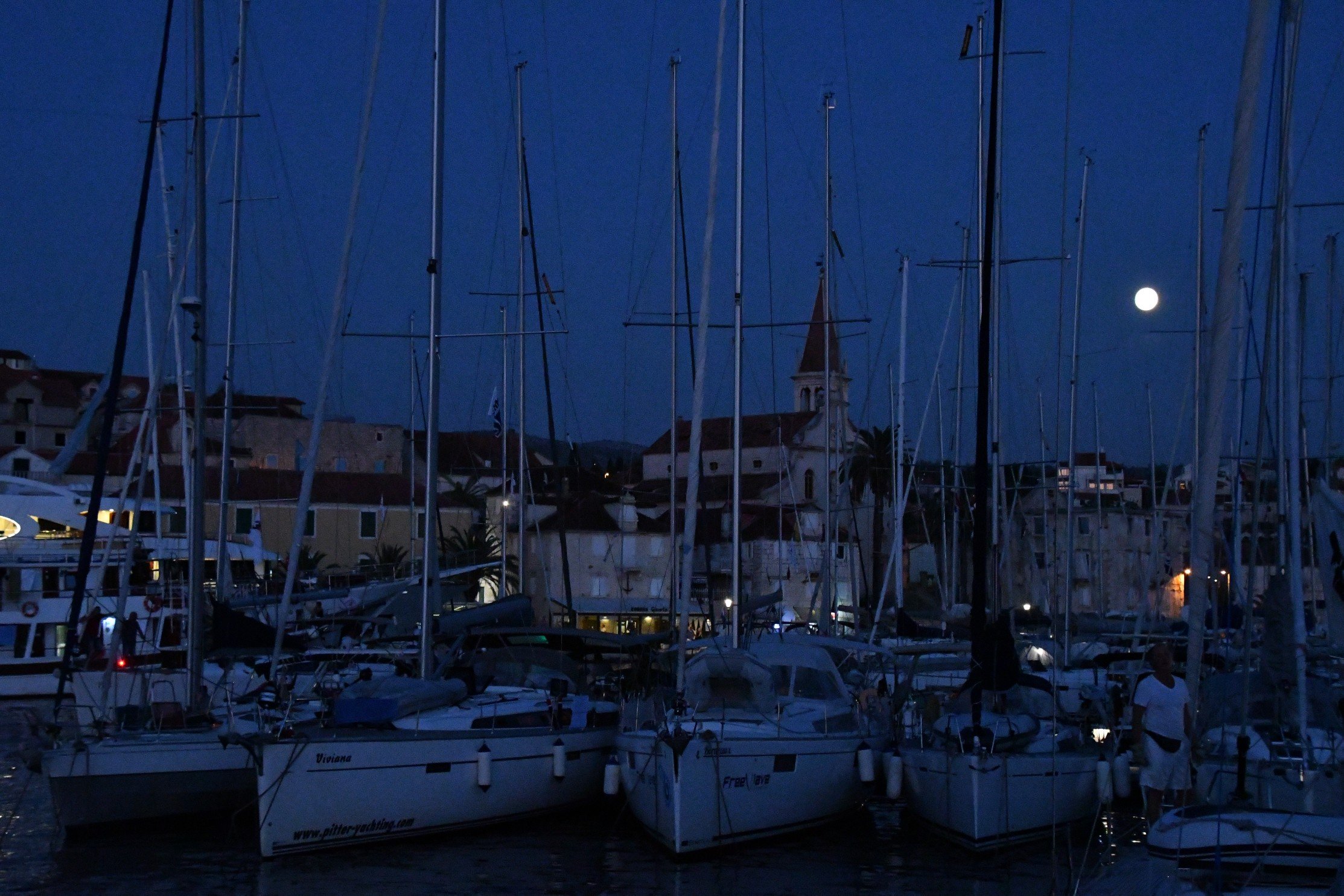 and the sunset colours were lovely. 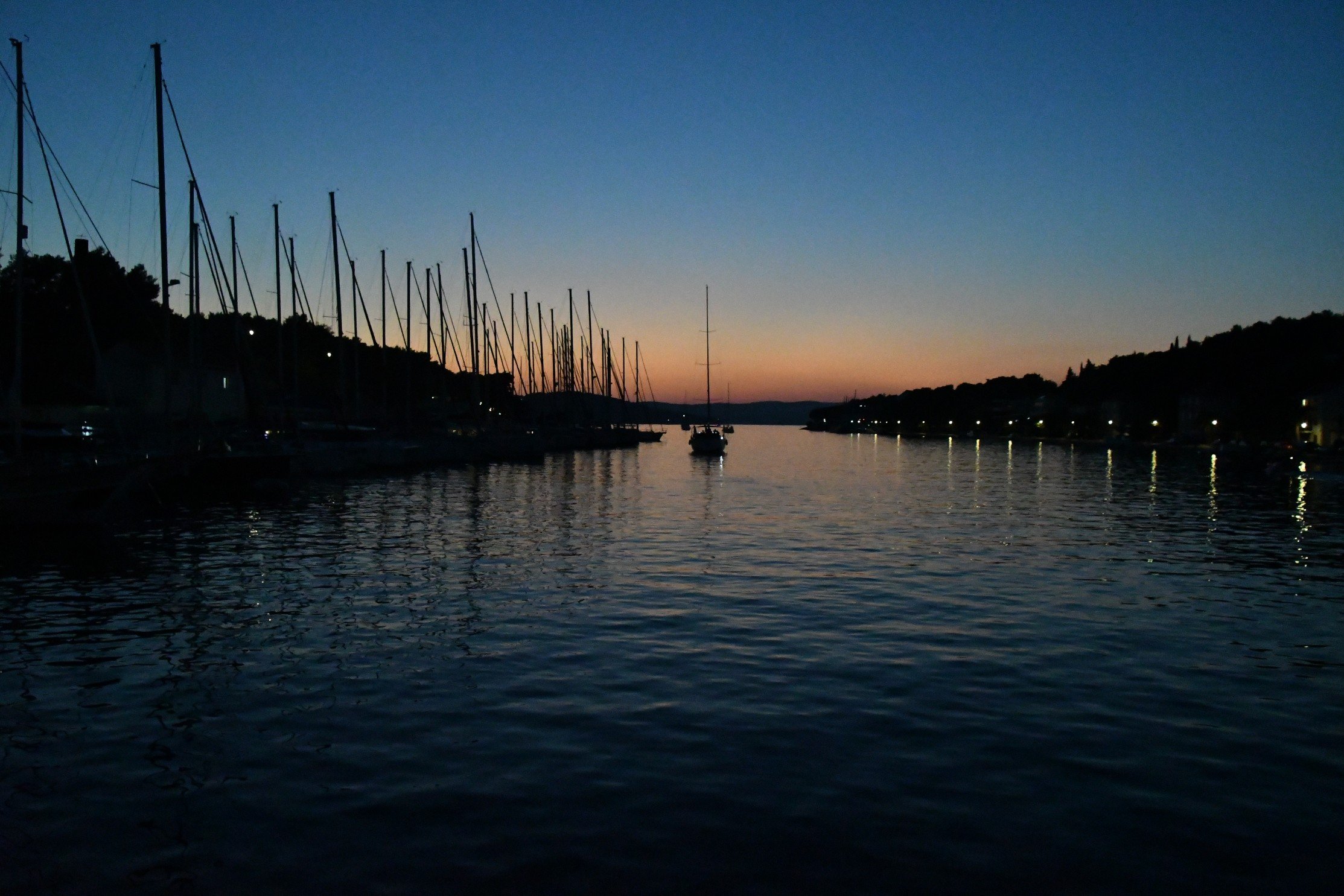 We had a very tasty and fishy evening meal to round off the day. Walking back to Perla, it was very difficult to believe that there was a storm brewing. But there was – and you’ll have to read all about it in the next entry. See you there!