After the several days of not packing and unpacking, we then had a burst of moving about and staying for very short periods in places.

We disembarked from Ventus Australis in Ushuaia, which is the capital city of the region, which means the island of Tierra del Fuego and the other islands that make up the region of Tierra del Fuego. And possibly the Malvinas as well – there’s a war memorial to the fallen of the Falklands war there.

We only had an hour or so to wander around Ushuaia. so we just walked along its main street (named after the liberator, San Martin). It’s a pleasant place – the buildings are often colourful and attractive 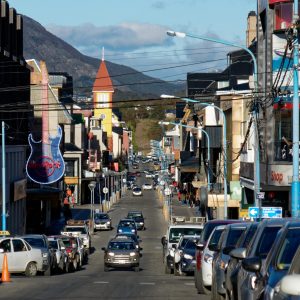 and there’s a dramatic backdrop of mountains. 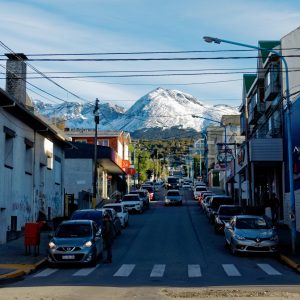 The local standards of wiring seem a little alarming to European eyes (this was an example from Punta Arenas, but not untypical of the South American wiring we saw pretty much everywhere): 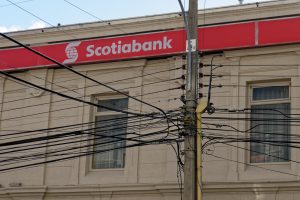 Ushuaia is something of a centre for skiers and snowboarders – the mountains can be reached in under an hour, and so I can imagine it draws a goodly winter sports crowd in the season.

After our short ramble around, it was time to depart for El Calafate, which would be the staging post for an excursion to the Perito Moreno Glacier (see separate post). We thus had an afternoon to wander round this much smaller, but very charming little town. Like Ushuaia, many of the buildings make great use of colour. 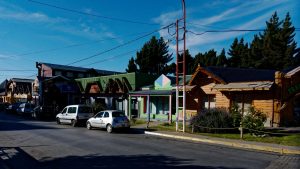 The sun was shining, which helped, but there was a very pleasant vibe here. I think the town is very much a tourist centre, and this gives it a laid-back feel which I enjoyed. 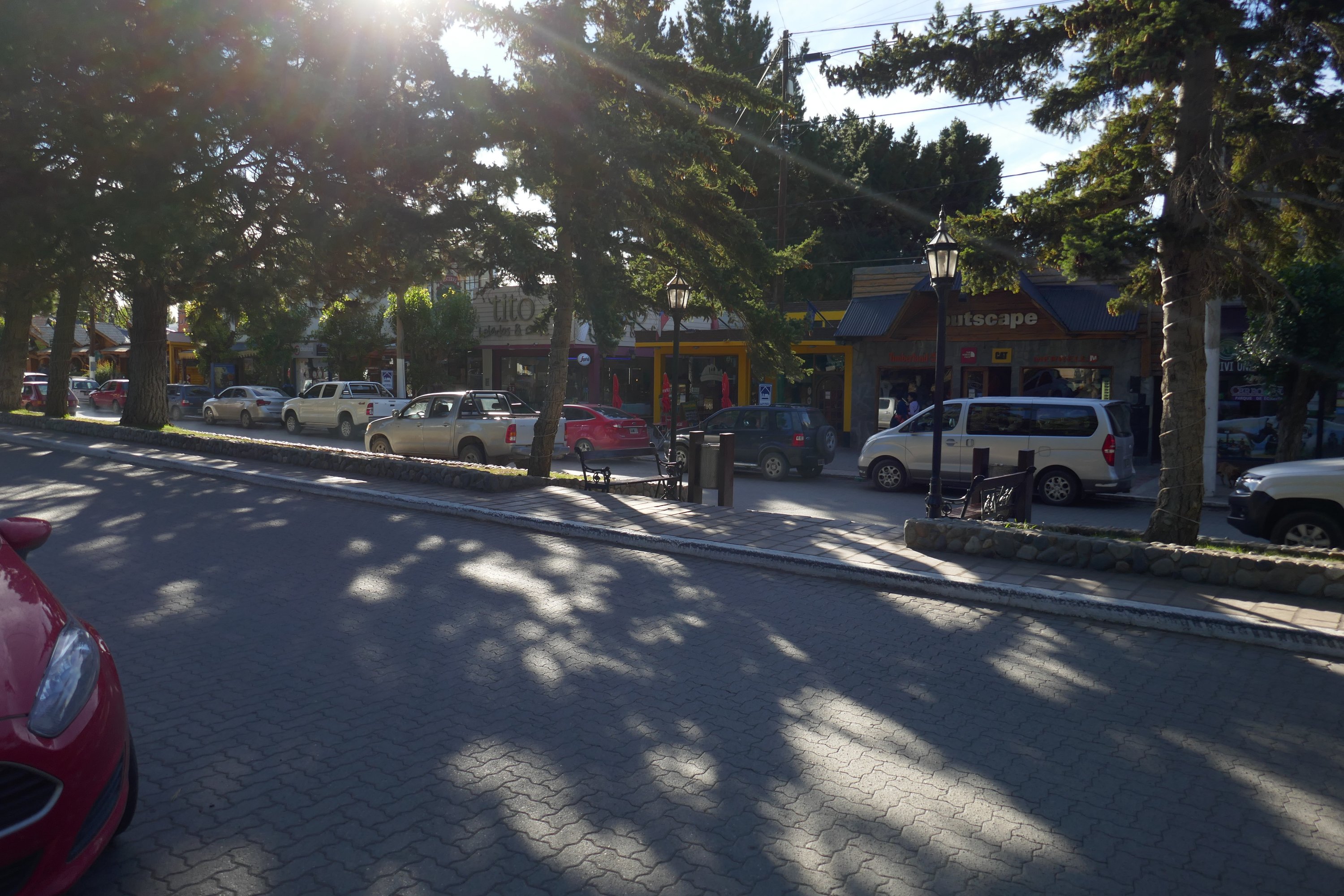 I particularly liked the way this public phone service is presented. 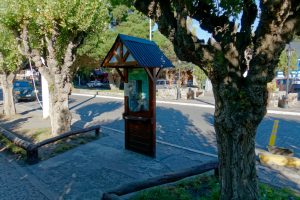 The town’s founders, back some 130 years or so, planted poplar and willow trees, which makes it very green. I should imagine that the abundance of trees is a wonderful boon for the local dogs, of which there seem to be many and whose hobbies also seem to include chasing cars and barking a lot at each other at night. 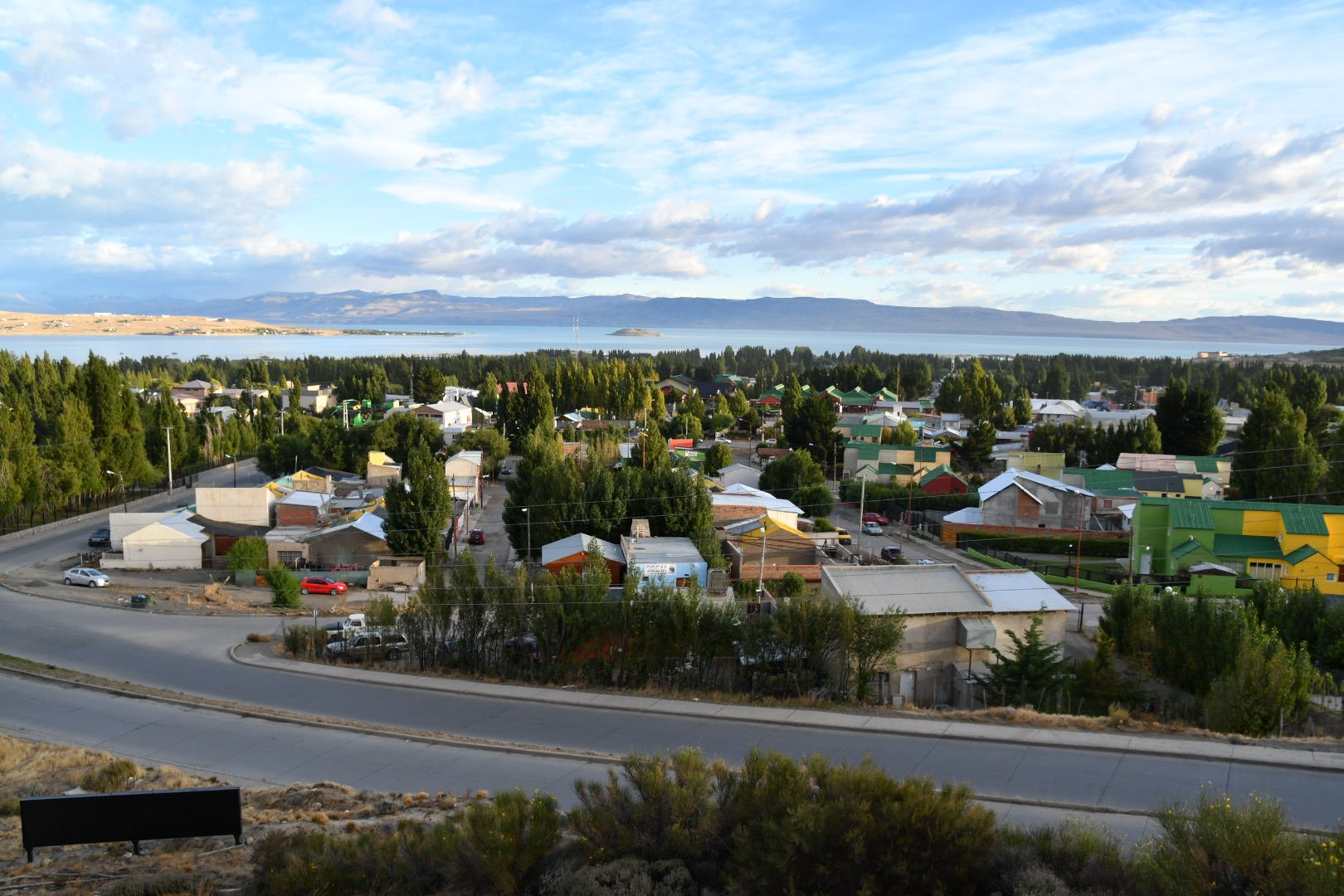 The town has several parks which also add to the overall charm. 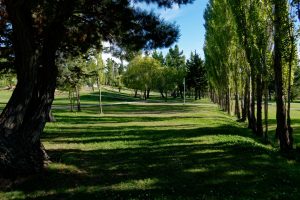 Mind you, this one near our hotel was called the Parque Manuel Belgrano, so that gave us a score of two names with uncomfortable UK overtones in just the one day.

Our hotel was called the “Esplendor”. Unlike the Singular, it didn’t quite match up to the pretensions of its name. It did all the basics well (good food, comfortable beds – surprising given how lumpy the pillows were – and obliging service). I guess it was probably cool a few years ago, but decor based around plastic elk horns is no longer edgy, and the woollen knitted lampshades are bizarre to my eyes rather than charming. Some of the decor is a bit faded and in need of a refresh. But, hey, we slept well there and persistent searching revealed enough electric points to charge phones and cameras, so these complaints tend a bit towards nit picking.

We had a great insight into the Argentinian preference for a carnivorous diet when we ate one evening at a very good restaurant called Mako. After what seemed like a rather gruff reception, the service turned out to be very friendly. To accompany the inevitable (and delicious) Malbec, chosen, with help, from a great long list, we ordered a plate of grilled meat that was advertised on the menu as being for two people. My religion forbids me from sharing a photo of it, but it could easily have fed a family of four. Here’s the nearest I can permit to a photo of food, which is the barbecue being operated in the window (something we saw in other restaurants as well). 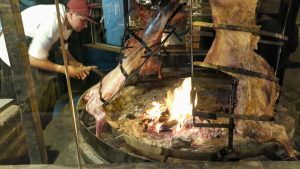 The “Calafate” in the town’s name, by the way, is the name of a bush, which produces a berry that has many uses – for jam, for ice cream, for beer, for a liqueur which, added to a Pisco Sour, transforms it into a Calafate Sour. It’s a spiky bush. Sorry, but the berry season has passed, so I can only show you thorns and leaves. 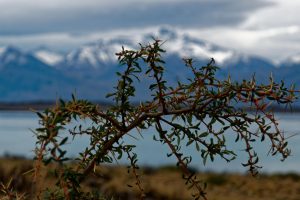 After our short stay in El Calafate, the next stop was in San Carlos de Bariloche, to give us another staging post before the next big segment of our odyssey.

It’s an hour-and-three-quarters on an aeroplane to get to Bariloche, and this journey started from the small but perfectly-formed El Calafate airport (perfect, except the WiFi wasn’t working, but otherwise nicely organised with charging points for the mobiles, cafés and helpful signs telling you what facilities were available airside).

We never got to see Bariloche itself, except in the passing rain, but it looks like an interesting city, with a Swiss-German architectural heritage, funiculars to take you up a steep hillside, and vast numbers of hotels by the lake. It seems to be a year-round city, with skiing faclities just 20km away for the Winter, and lots of lake-based things like fishing an attraction for the Summer.

Our destination lay some 25km to the west of Bariloche, at the swanky Llao Llao hotel. “Llao Llao” is pronounced “zsow-zsow” (with the “zs” as in Zsa Zsa Gabor) and is the aboriginal name for the Indian Bread fungus which affects the local version of Beech trees. For those who have followed this blog, you’ll have seen a picture from our condor hike about a week ago.

We arrived yesterday in torrential rain and howling wind. Today the rain has gone so revealing a decent view from our hotel over lake Moreno.

The rain may have gone, but the wind still howled. Nevertheless, we went for a walk which, by reason of missing a turn, became a 10-mile hike on to a trail that involved a 350-metre ascent. However, the view from the top was quite nice 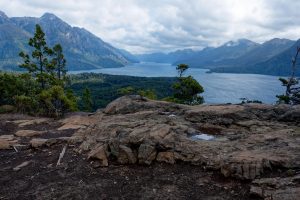 and on the way we saw a lapwing 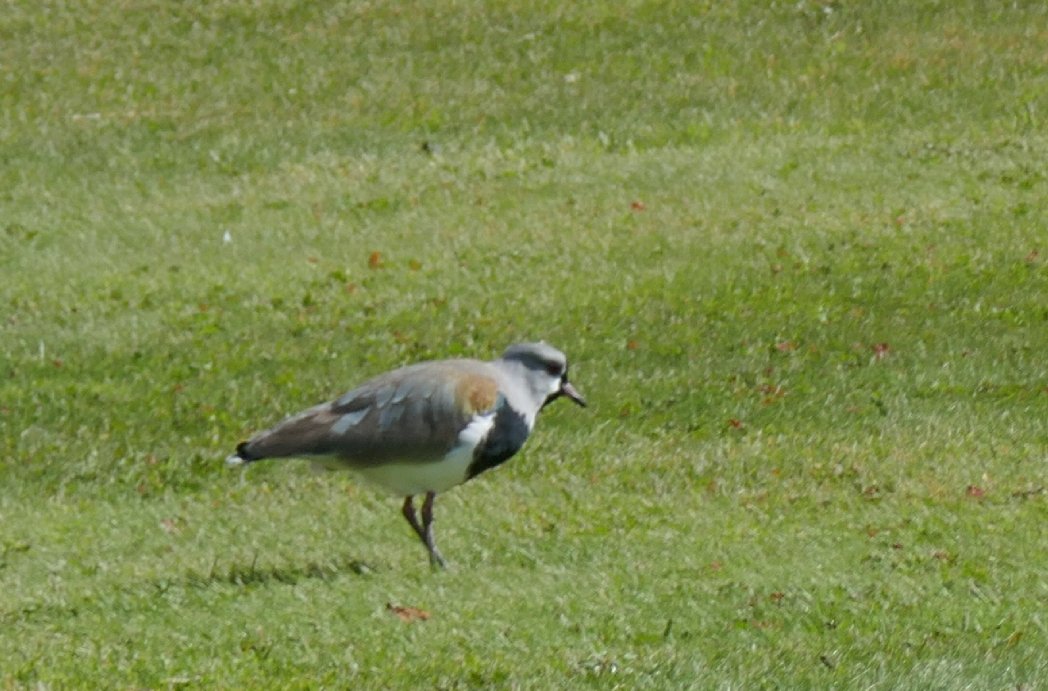 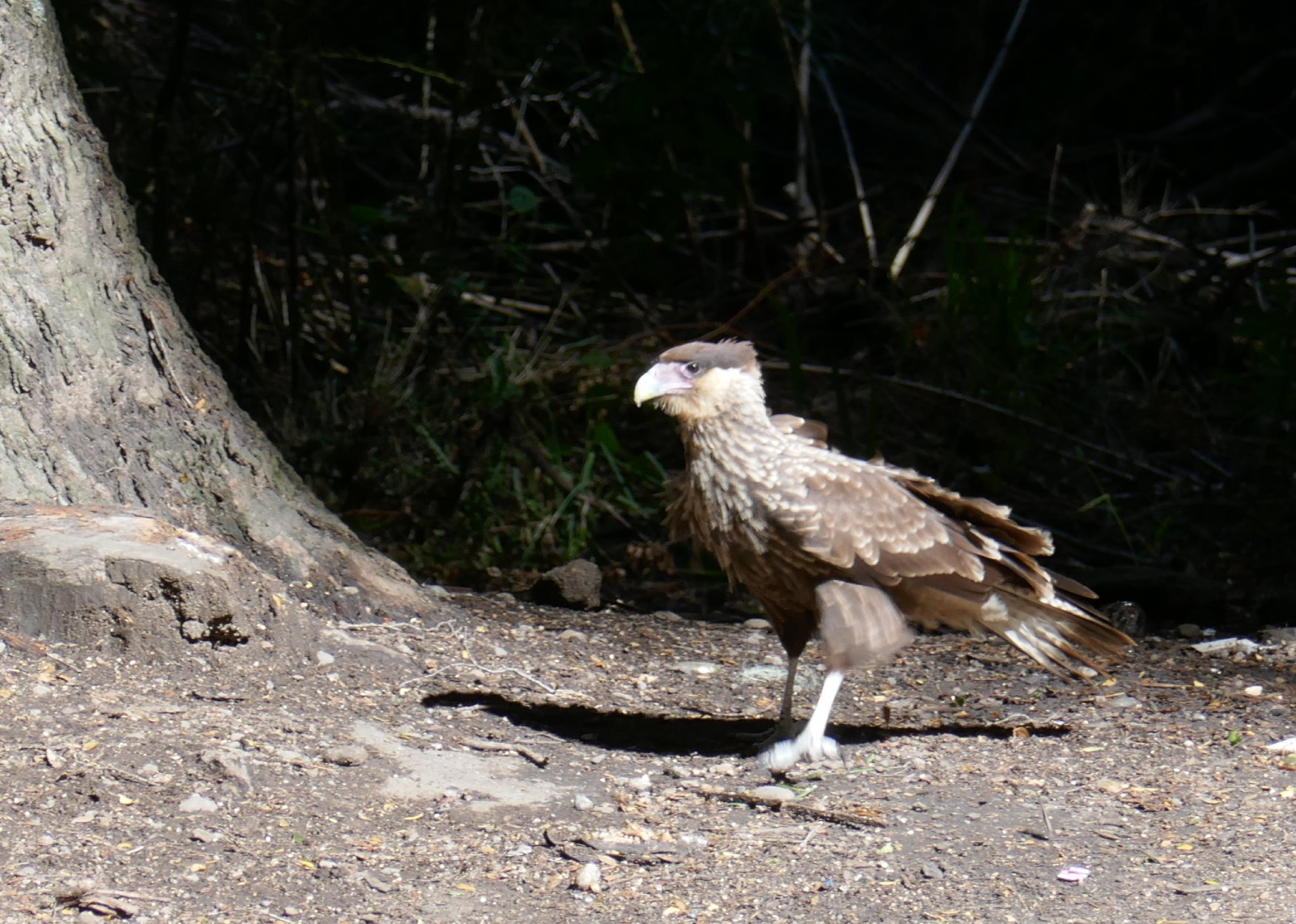 and ended up with a nice view of the Llao Llao Hotel to finish off the walk. 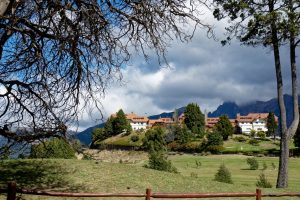 The next stage of our journey is another transit to take us on towards a more major segment, which is a visit to Easter Island.