The last Major Tourist Thing on our itinerary was a boat ride on Lake Titicaca, proudly calling itself “the highest navigable lake in the world” on the basis that there is a steam ship in the harbour which took two years to assemble from 2,500 parts which were made in England and shipped to Puno by rail over a period of four years. So we’ll give them that, shall we?

As usual with Major Tourist Things, the bloody alarm went off at 0500 so we could catch a boat on the lake. We knew from the comprehensive itinerary that Sunvil had prepared for us that this Major Thing would have two component bits: a visit to the lake-dwelling Uros tribe; and a visit to another island called Taquile where we could wander round (lunch included). Nothing in the descriptions we’d seen prepared us for the utterly absorbing day we experienced.

The waters of Lake Titicaca (pronounced with very strong K sounds and meaning stone (titi) puma or cat (kaka) due to a fanciful interpretation of its shape) are very shallow in the Puno section (there’s a bottleneck caused by a pair of peninsulae which separate it from the main body of the lake). This shallow section hosts a vast area of reeds, which the Uros tribe (a pre-Inca people) used at first to make boats that they could live on which could easily be moved as a defensive tactic. This graduated into the building of rafts and there are now several dozen such rafts which are the location for an entire way of life.

OK; so far, so good. What we were utterly unprepared for was the scale and sophistication of the area. These pictures show you just one side of a channel, and the other side was of the same order of size. 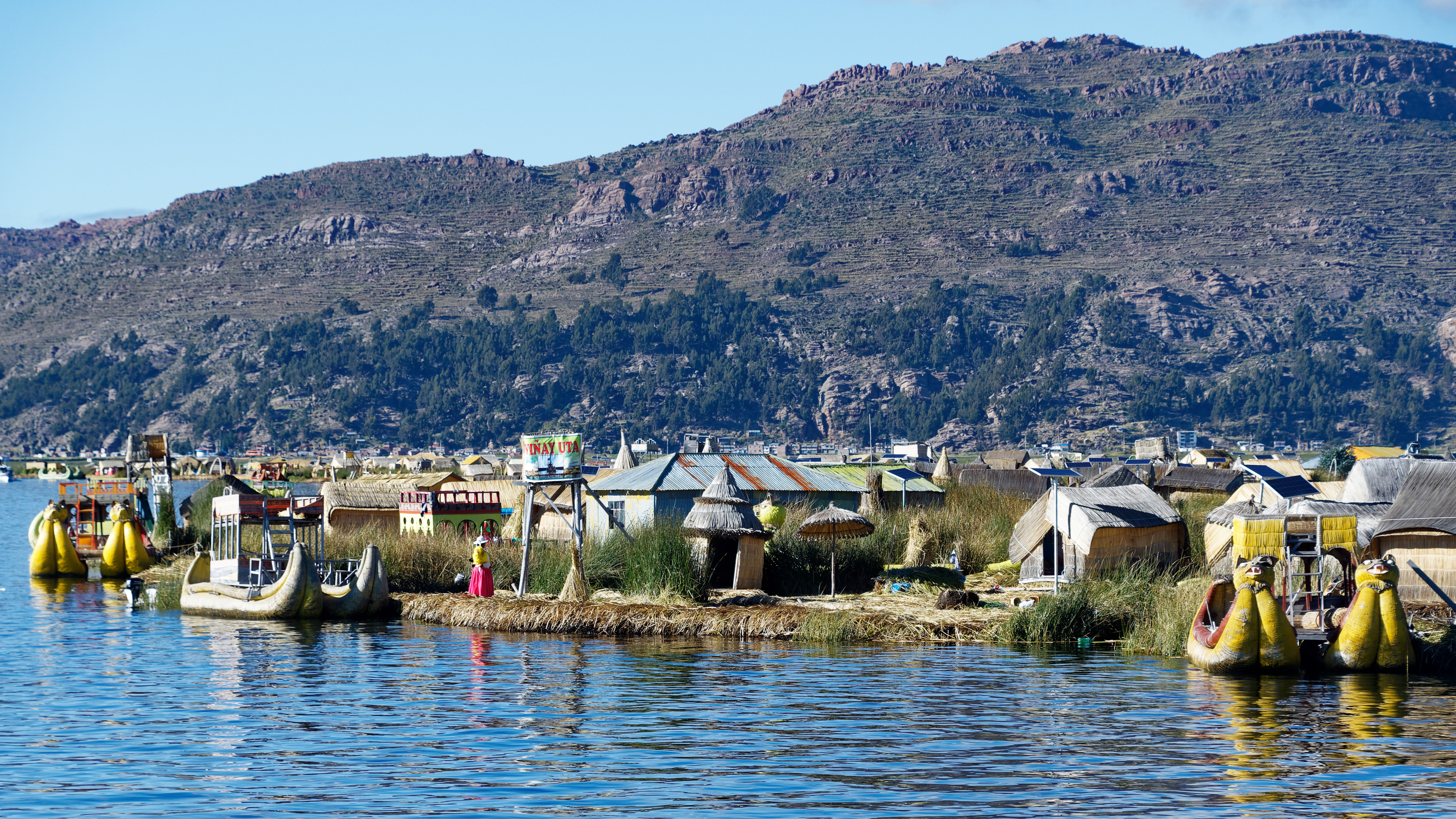 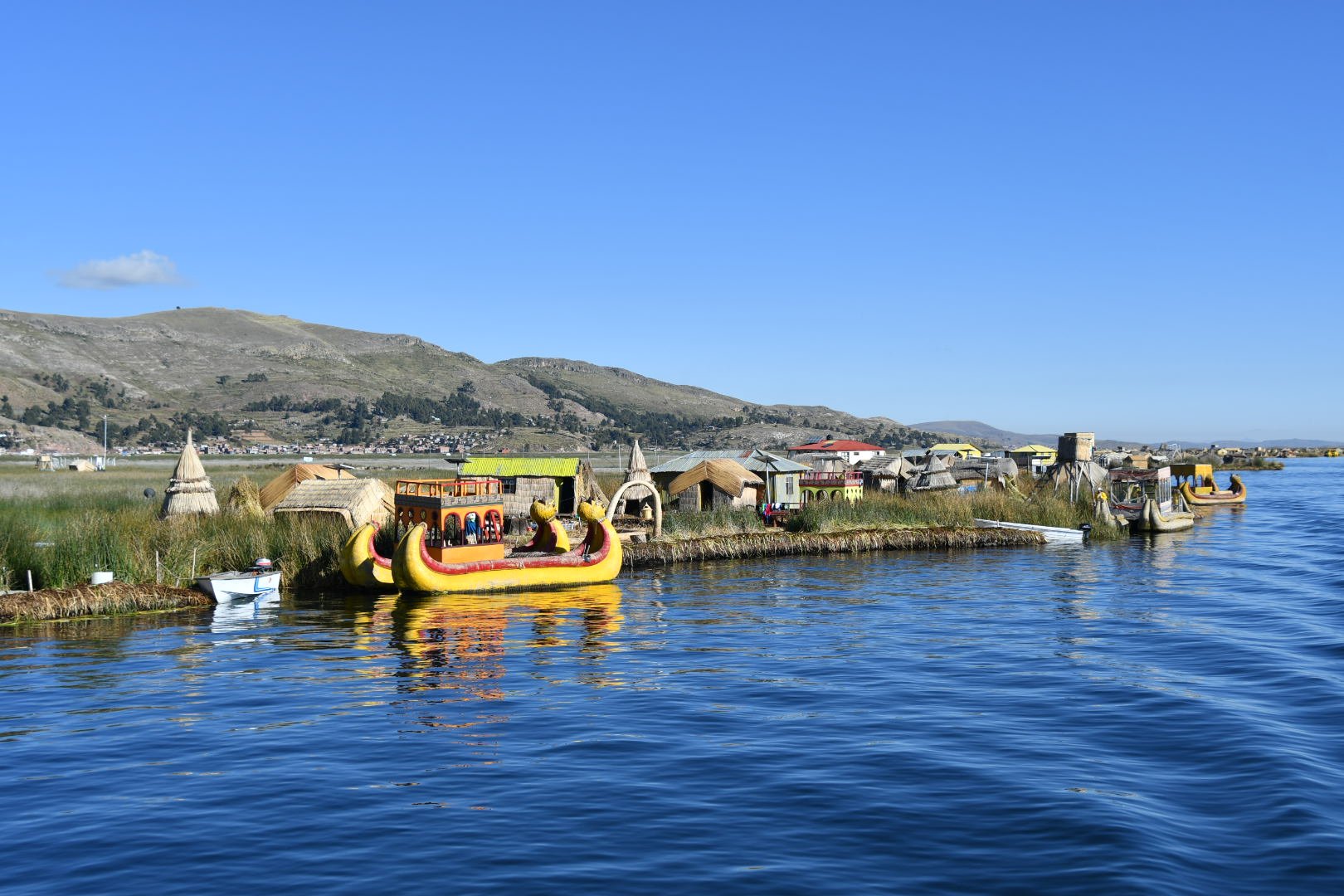 Here are a couple of video clips, one of each side of the main channel, which I also hope get across the scale of what’s there.

We landed on one of the rafts and were treated to a comprehensive education on how the rafts are made. 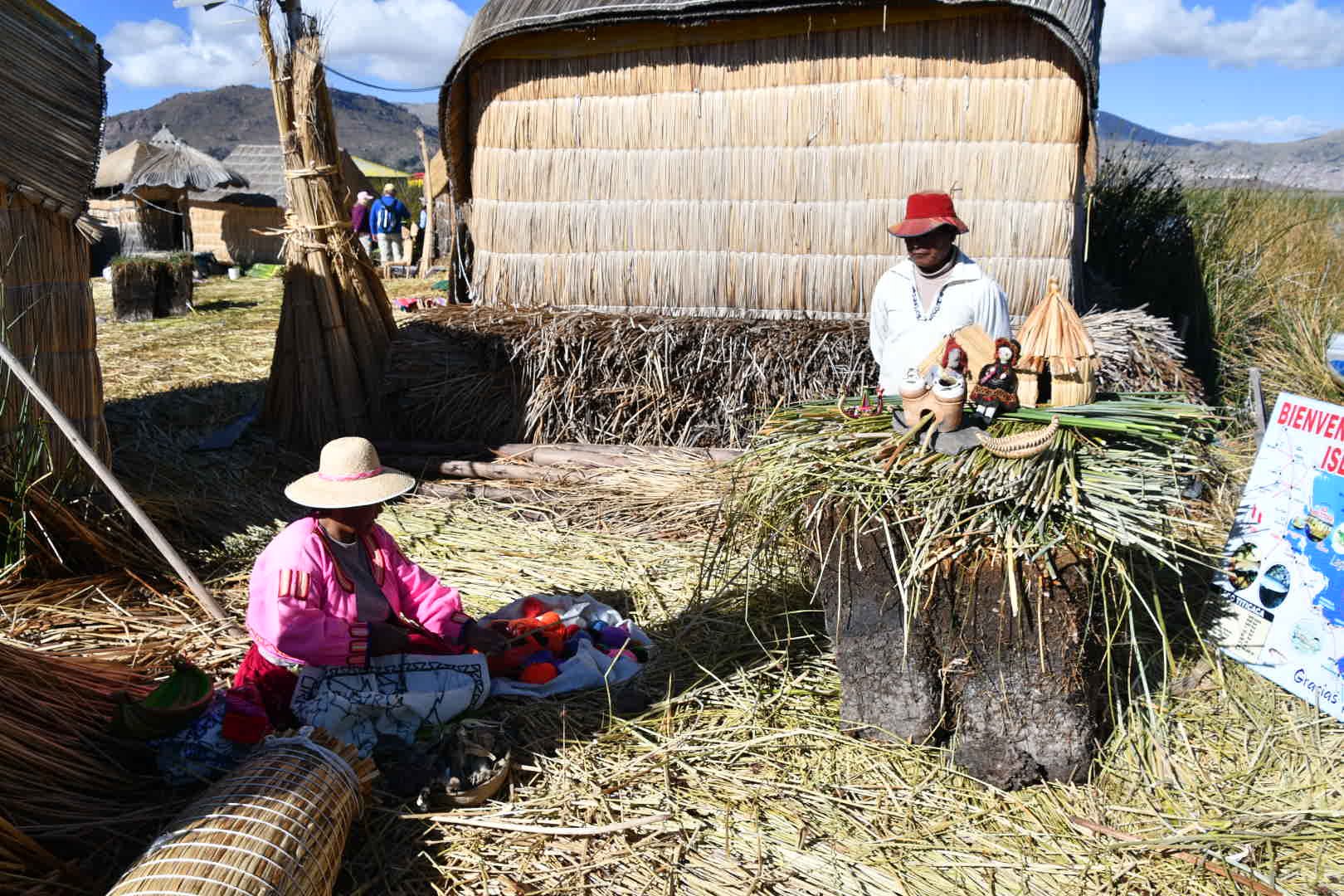 Some day I shall try to make a video about it, but basically what you see in front of you is some approximately one-metre-square chunks of reeds that have been hacked out of the mass of reeds because they have broken free of the mud and started to float. These days the people use large saws to hack out sections, but they used to use much more primitive tools (something like a large, bladed hoe) to do this. They embed sticks into each section which they then bind together – again, today with nylon cord, but originally with rope made from reeds.

The bound sections are then left for a month so the living reeds can grow cross roots bonding the whole thing together; they can then be hauled into place and added into already-extant rafts, after which they’re covered in a reed flooring (about 1 metre of layers placed alternately at right angles to each other) and so are ready for building reed houses on. The flooring has to be continuously renewed as it rots away from the bottom, and so occasionally they have to lift a house, refresh its reed base and replace it. The whole raft is anchored in place to stop them waking up in Bolivia if the weather turns nasty.

It’s very obviously a major undertaking and it takes a lot of maintenance. But the end result is something that can support a group of people consisting of several families.

(We were told that if a family in a community annoyed everyone else they were simply cut free.) There is a medical centre, school, churches… a population of around 1,000… the mind boggles.

The original tribes lived on boats and it’s clear that boats are still very much part of their culture – apart from anything else, they need to use them to get necessities from the mainland such as fabric for clothing, fruit and veg (although the reeds are edible) and so forth. Some of the boats they build are large (double-decker, in fact) and capable of carrying several people, and are often decorated with ceremonial animals 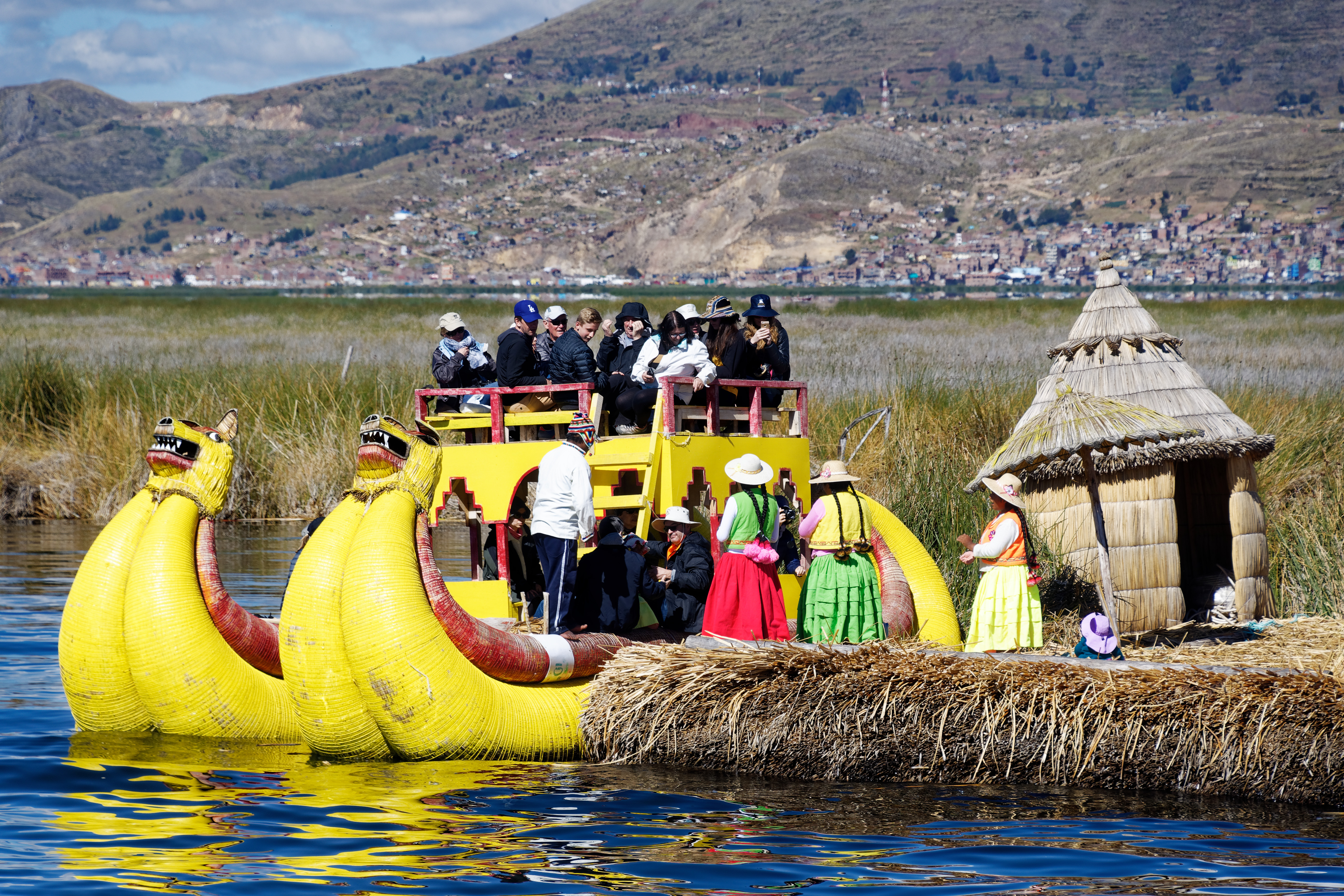 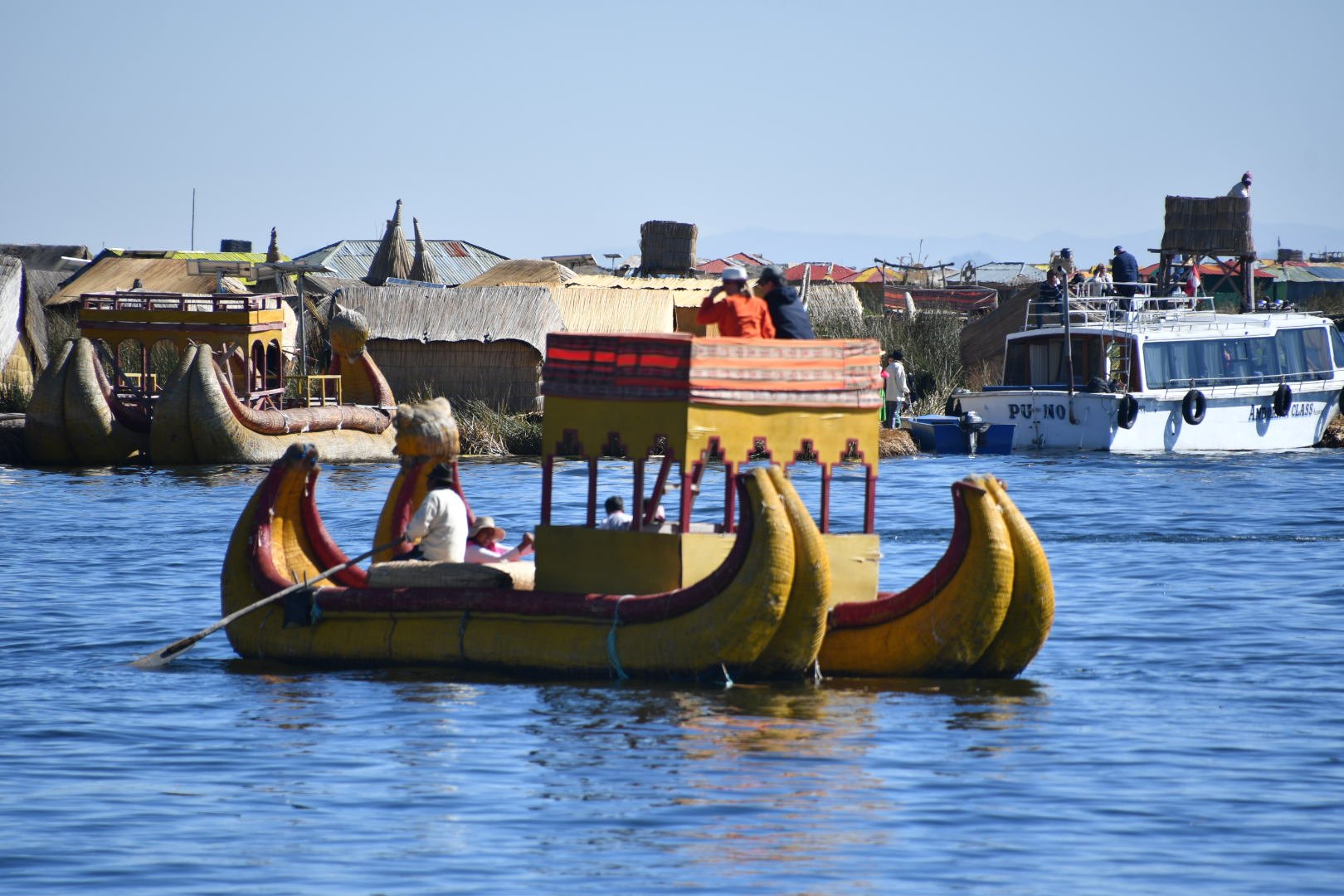 and they are moved by two Uros rowing at the front (as you can see from the first video clip in this post) – at that altitude, they must be really fit!

The Uros people don’t shun modern technology at all – they have solar panels for electricity, for example, although there’s no internet. Tourism is clearly a major source of income, although I gather that the tourist boats that visit them tend to alternate sides of the channel so that individual communities are not beset every day. The people knit and weave and so have produce that they can sell to visitors, but the retail opportunity is nicely managed and not at all importunate. They managed to separate us from a few dollars for something we didn’t really need, but we gladly paid up, as the experience, particularly that of being rowed about on one of their “Mercedes Benz” boats, was so striking and such a pleasure.

The next stage of the day was a visit to a real, solid, island called Taquile which is out into the major part of the lake. We landed at one pier, and embarked on a short hike around the island, on a prepared path, to another pier where our boat was there to meet us. We had to take things quite slowly, as the path was at times steep, and we were at over 3,800m above sea level. 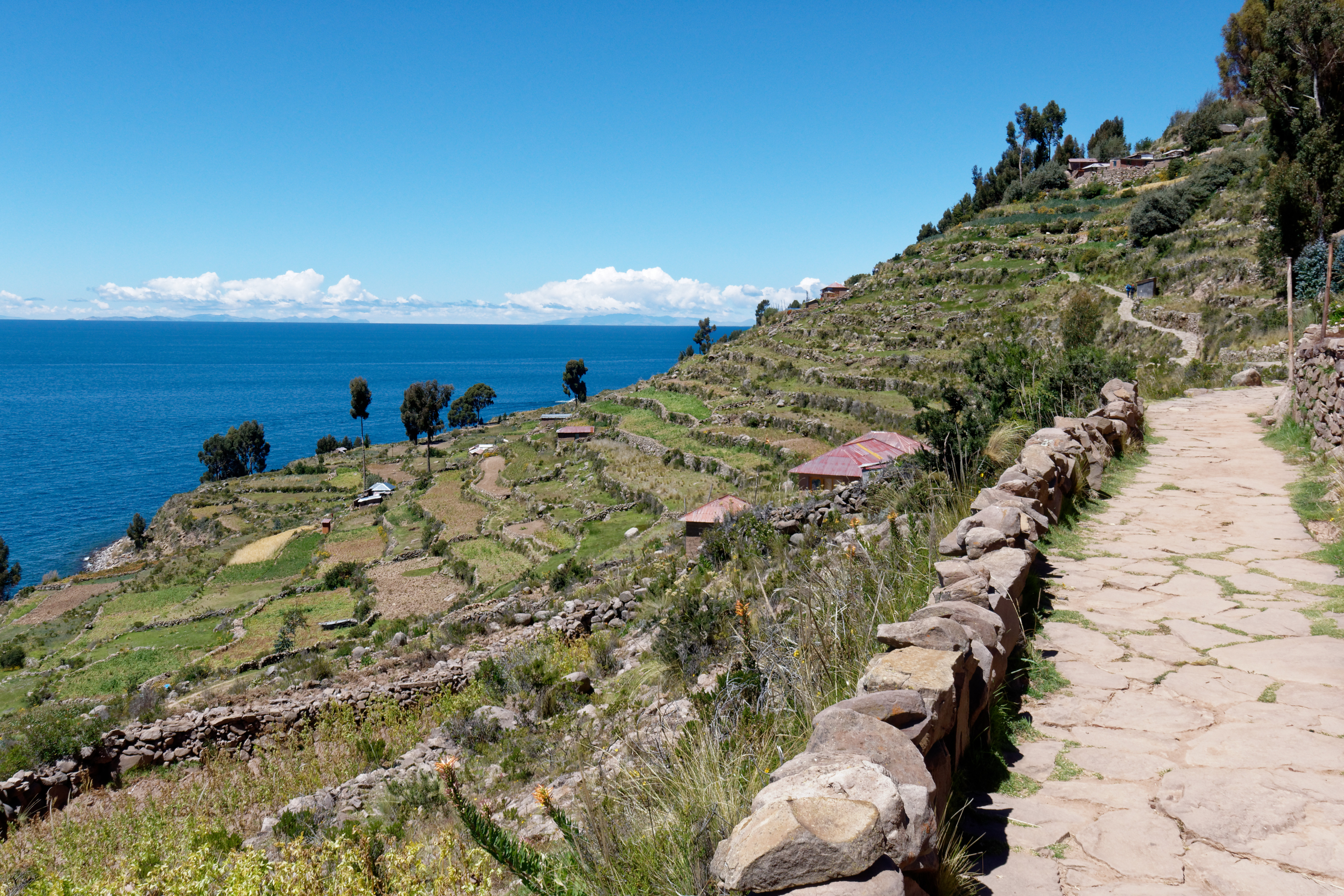 The island is a pleasant place, with much terracing for people to farm crops. 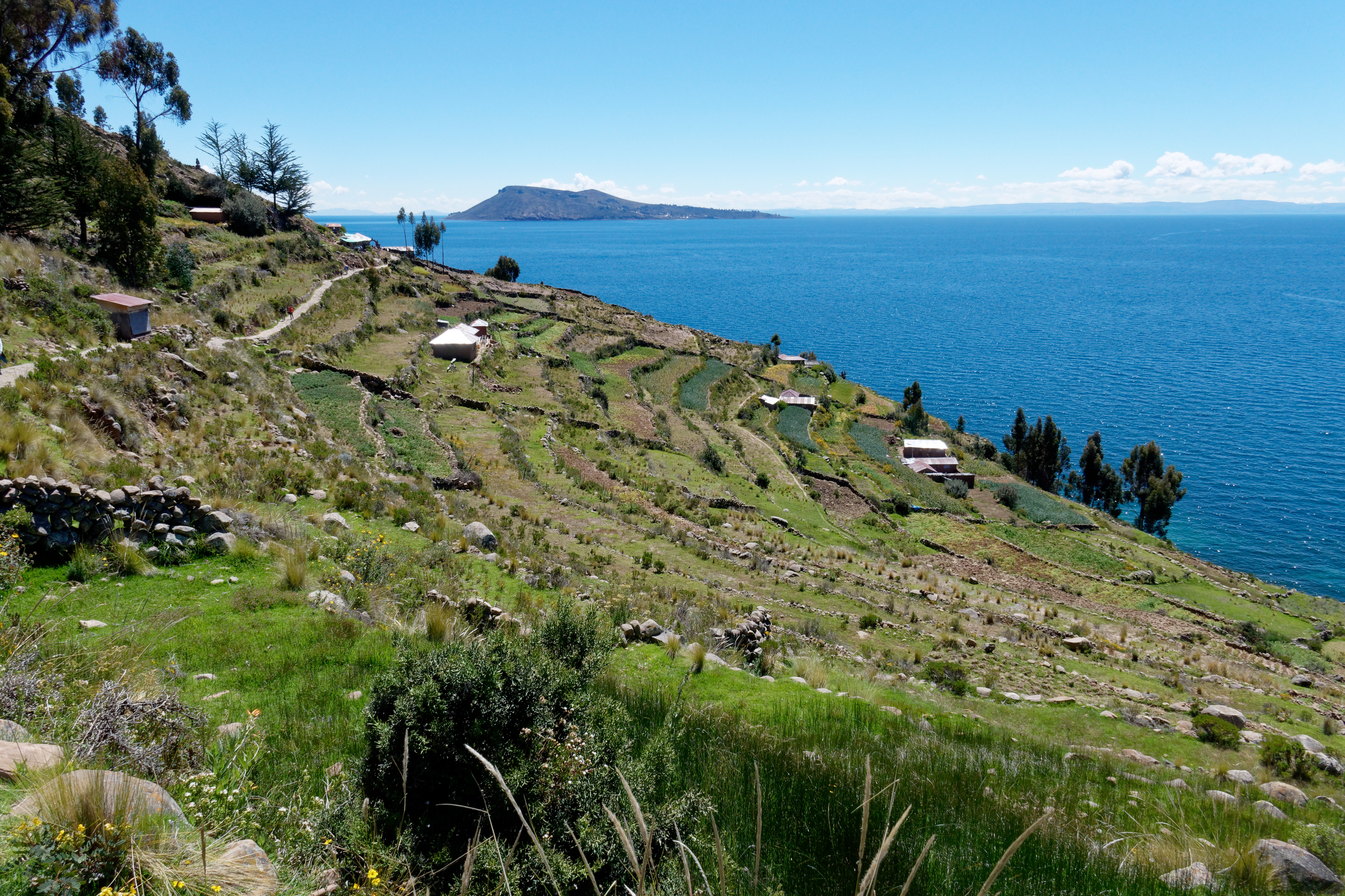 and it’s divided into six neighbourhoods (based around the six families who originally settled the island in Inca times); each neighbourhood is demarcated by a stone arch. 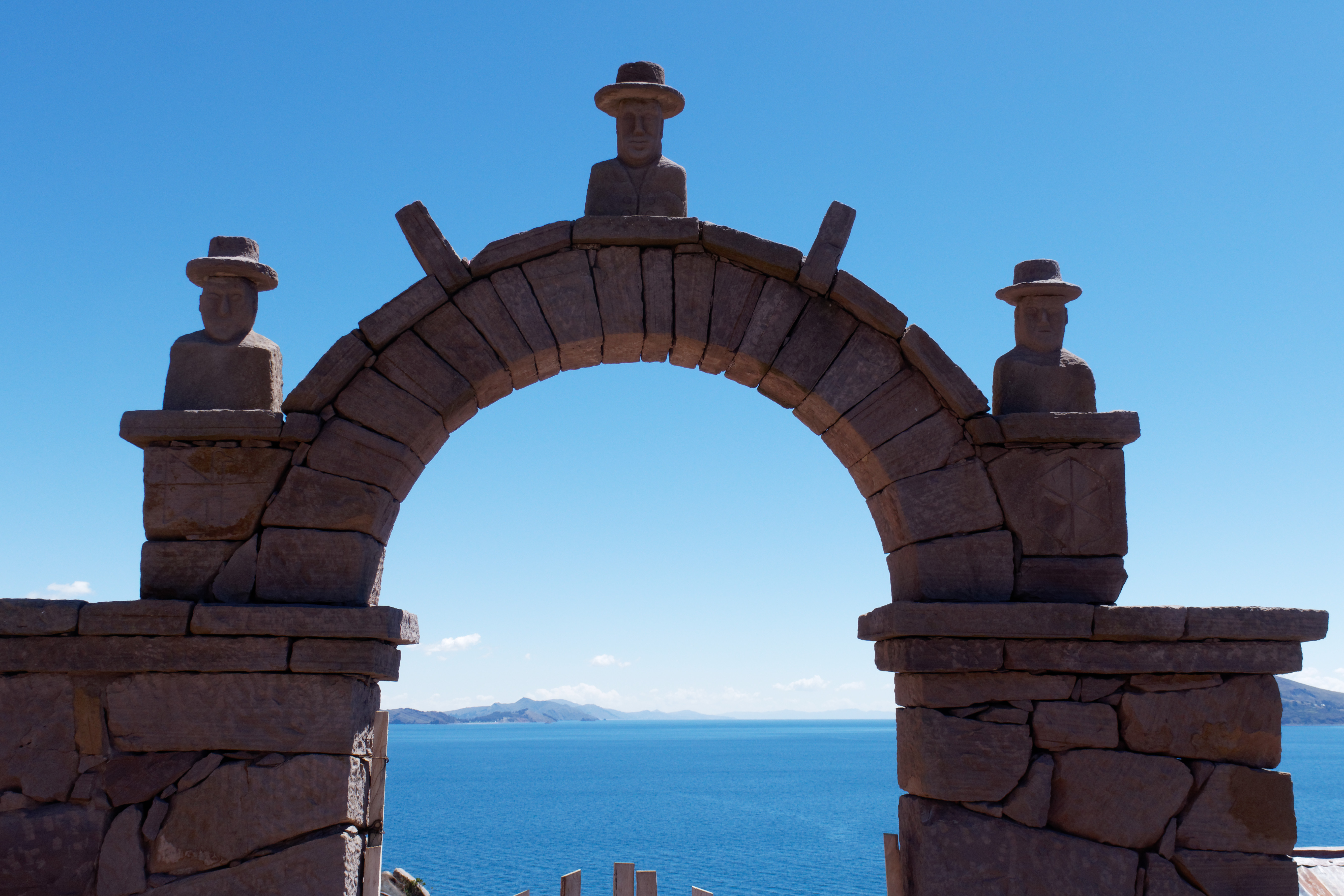 We stopped for lunch at a place which caters only for visitors. The island doesn’t have hotels and restaurants, although people can visit and stay with families to learn aspects of the local ways of life; and families eat at home. But we and other tourists were served a very agreeable lunch of quinoa soup and trout. Before lunch, our guide, Aidee, explained some details of the culture that the island people are working hard to keep active. A key aspect of this culture is the clothing, and there are many things that people wear to show their status or role in the society. All of these things are knitted (by men) or woven (by women) on the island and it was fascinating to learn about them. 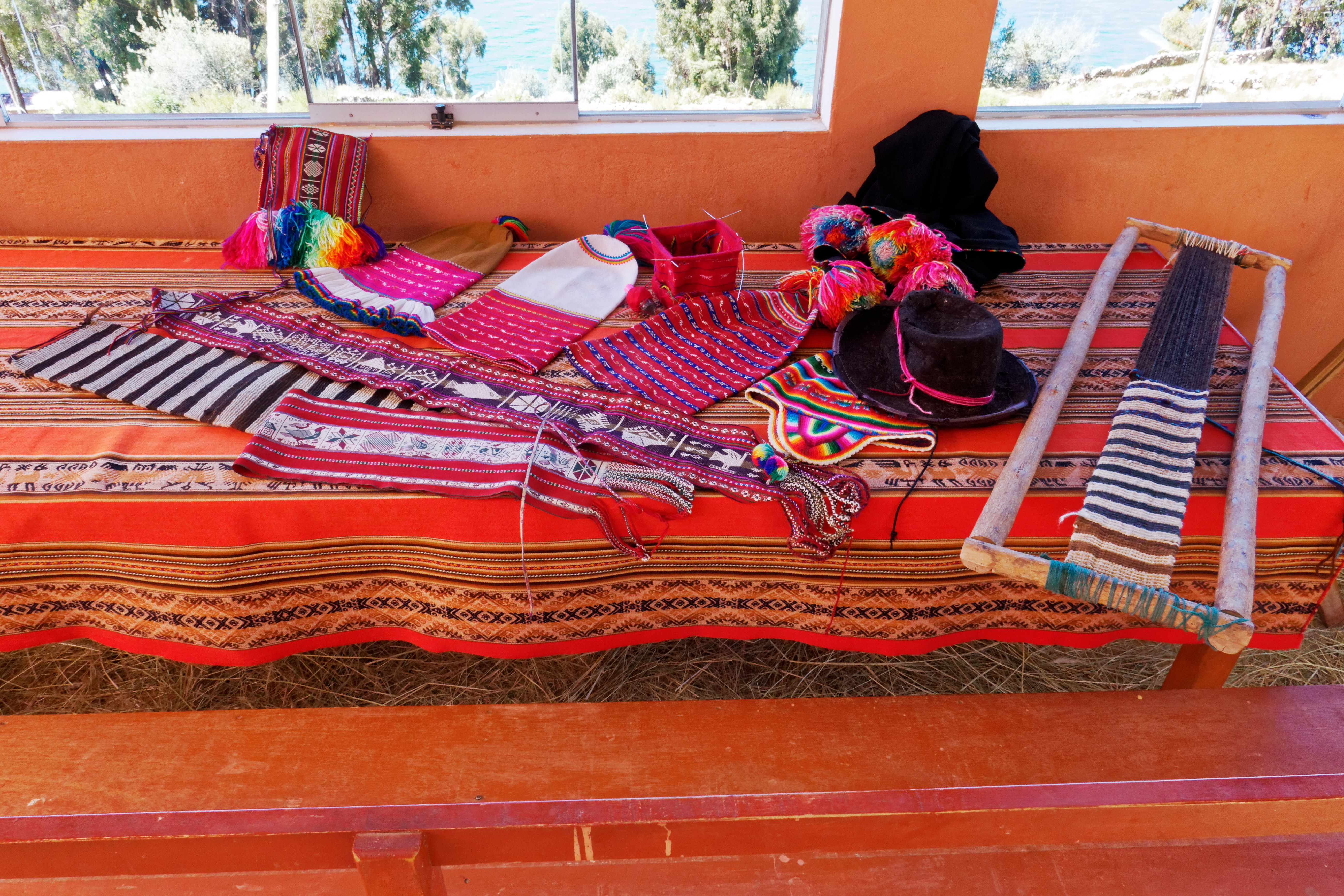 Above, moving roughly from right to left: 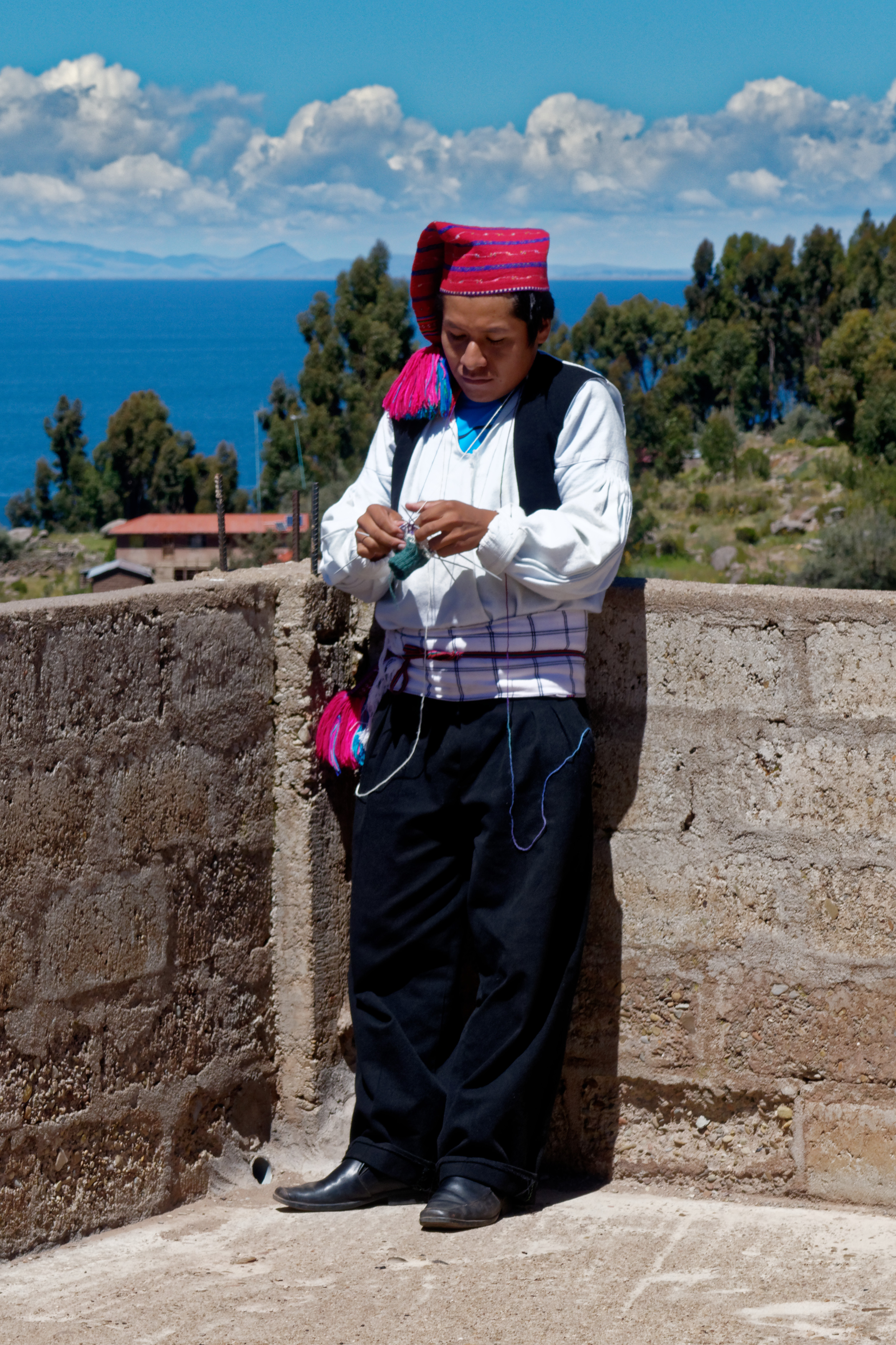 This very well-defined culture was as unexpected of the island visit as the scale of the raft society was earlier in the day, and so we made it back to Puno feeling that we’d had a very rich pair of experiences, and that we got very much more out of our last day in South America than just a token piece of tourist activity.