Our time at the very swanky Llao Llao Hotel was all too short, and so we embarked on the next stage of a transit which would eventually take us to our next major segment of our South American odyssey, a couple of days in Easter Island. But Tierra del Fuego to Easter Island is a major schlepp, and so we did in sections, taking in some popular tourist sights en route, as described in part 1. Some more sights awaited us in the second part of the transit, as we travelled from Barioche to Puerto Varas. This is a well-established tourist route, having first been undertaken in 1913 and, notably, by Theodore Roosevelt in 1916 (it was apparently Roosevelt who, basing his knowledge on the recently-established Yellowstone National Park, suggested that the areas surrounding this route be set up as a national park before modern life could damage it too much; and so it came to be, in around 1927). We had catamarans and buses instead of sailing boats and wagons, but essentially the route we travelled was the same; and we had a guide called Eduardo to explain to us what was going on, which was occasionally reassuring.

We started in Puerto Pañuelo, which is conveniently located a few hundred yards from the Llao Llao Hotel.

The boat took us to Puerto Blest, which is very scenic, but not very photogenic (WALP Factor 8, but all rocks and forests), so people spend a lot of time feeding seagulls. 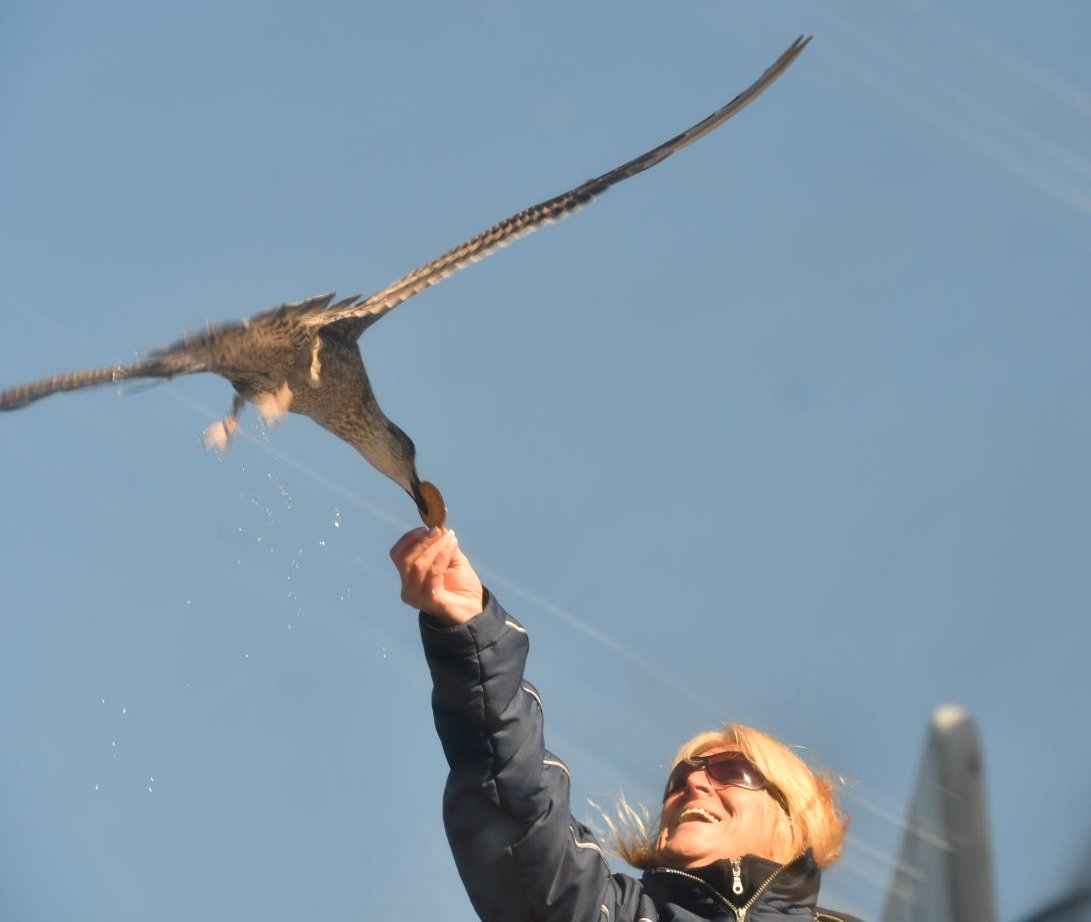 where we joined a very short bus ride to go to Lago Frias, a volcanic lake. At the end of Lago Frias is the Argentinian end of the border, where passports are checked and you have a chance to see a replica of the motorbike that Che Guevara rode across the Andes back in the days before Andrew Lloyd Webber became a national hero. 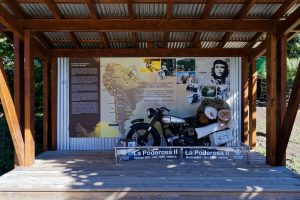 The border crossing is a multi-stage process. At the far end of Lago Frias, the Argentinian border staff leave the boat before anyone else is allowed to, so that they can set up their computers and so forth in a hut beside the above bike and another small hut selling snacks. They check passports and then get back on the boat to go back home, as did our Argentinian guide, to be replaced by a Chilean guide called Victoria. She and the ongoing passengers then board a bus, which grinds its way up a rough and winding track to the actual border. A few hundred metres further on, there’s a photo stop to see a local volcano named “Tronador”, or “Thunderer”, so-called because of the noise that the glaciers make as they break up. 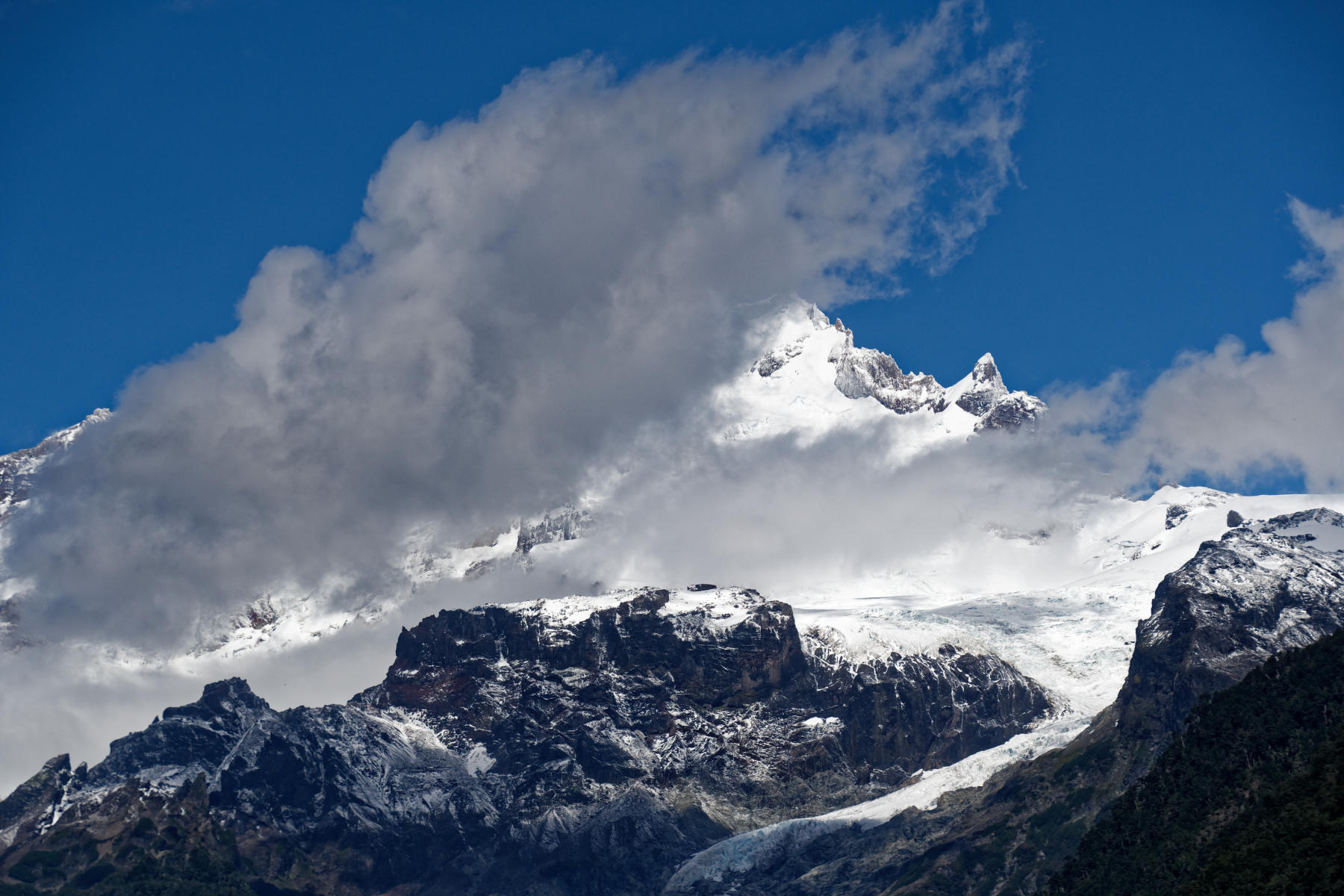 We were very lucky with the weather, as we could actually see something. Given that this area receives on average three metres of rain (yes, ten FEET) every year, and that it rains some 228 days a year on average, I think we got privileged access.

After this, the bus grinds on to the Chilean border, at a small village called Peulla, where everyone has to get out and open their luggage so that Chilean border guards can check that you haven’t brought anything illicit in. Once again, I had an agony of indecision as to whether to declare all four of the cameras I had with me, but decided not to; and the customs officer couldn’t have shown less interest in my luggage, which made this a good decision.

Peulla is a lunch stop with a choice of two local hostlelries, one of them being a hotel where we had grilled fish with vegetables (Jane) and fried fish and chips (me). We ate in the hotel’s conservatory, which featured a rather novel idea – a sprinkler (arguably a length of hose with holes in it) cascaded water on the transparent roof, and the sunshine through this made rather lovely patterns in the room itself.

There’s one more boat trip after lunch, which takes the journey on to Petrohué. This is the longest ride, but features nice views of another volcano, called Puntiagudo. 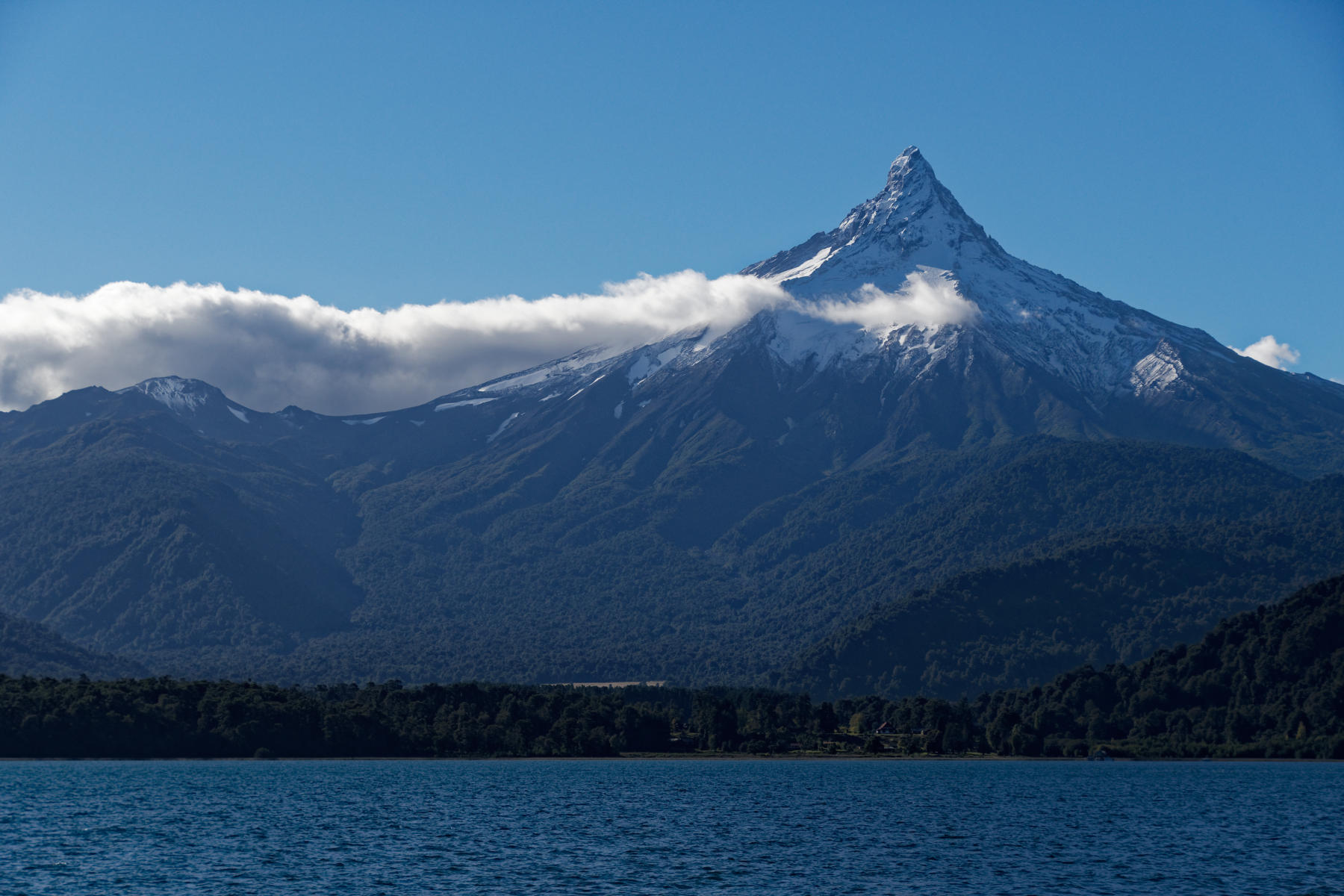 (translated: pointy tip) which looks a little like a local version of the Matterhorn, and another volcano, called Osorno, which I would think that many people would think was Mount Fuji, if they didn’t know better. 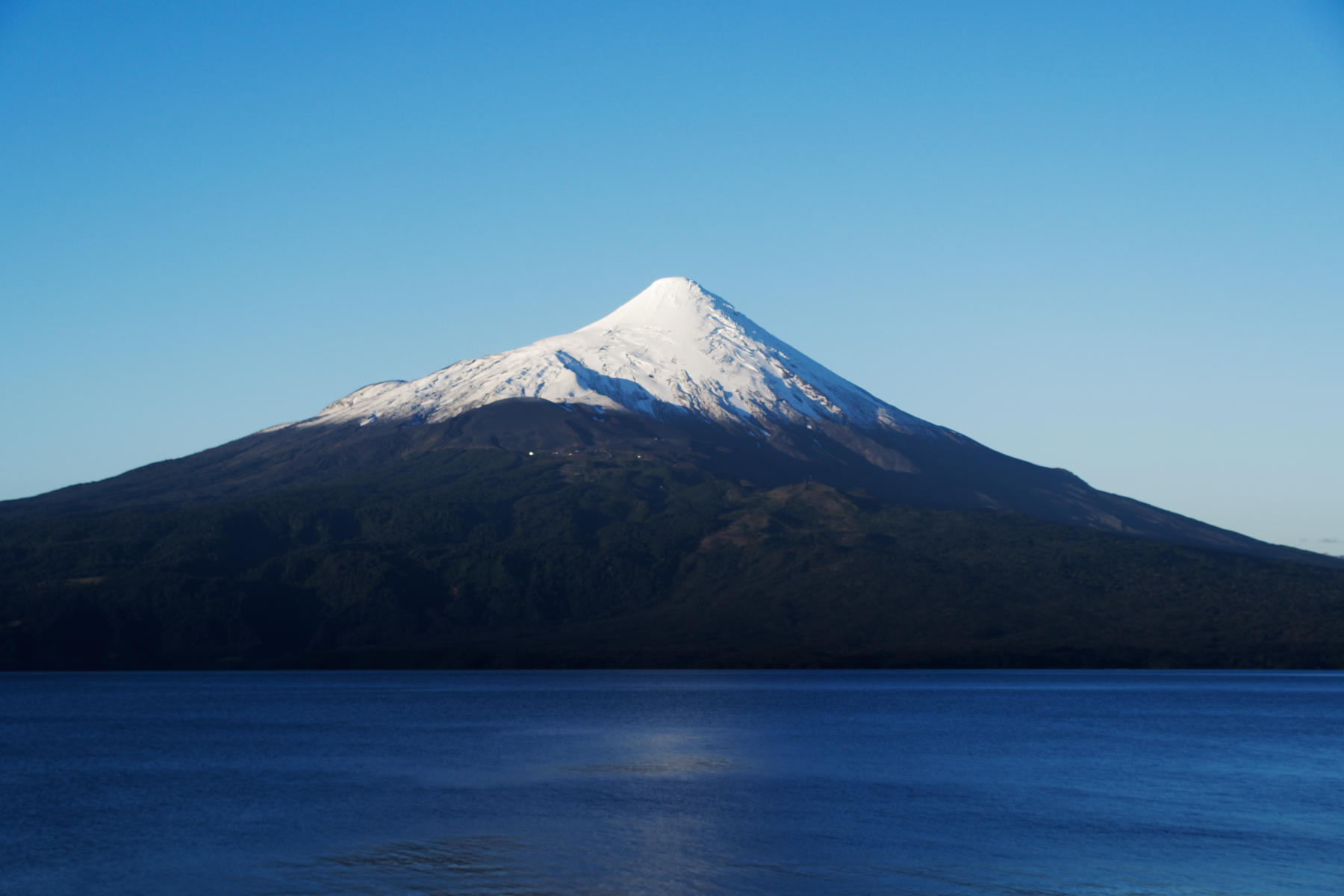 After this final boat ride, you take the last bus journey, 50km journey into Puerto Varas. However, the excitement doesn’t dim, even at this late stage, as there’s one final tourist attraction to visit, and time presses. In fact we cut things so fine that we had to sneak round the side of the visitors’ centre to get in to see the Petrohué waterfalls. I’m very glad we made it, as this is a splendid sight.

And our vulcanological insight was further enhanced on the last kilometres into Puerto Varas, with views of Calbuco, an active volcano which has erupted, and violently, as recently as 2015. 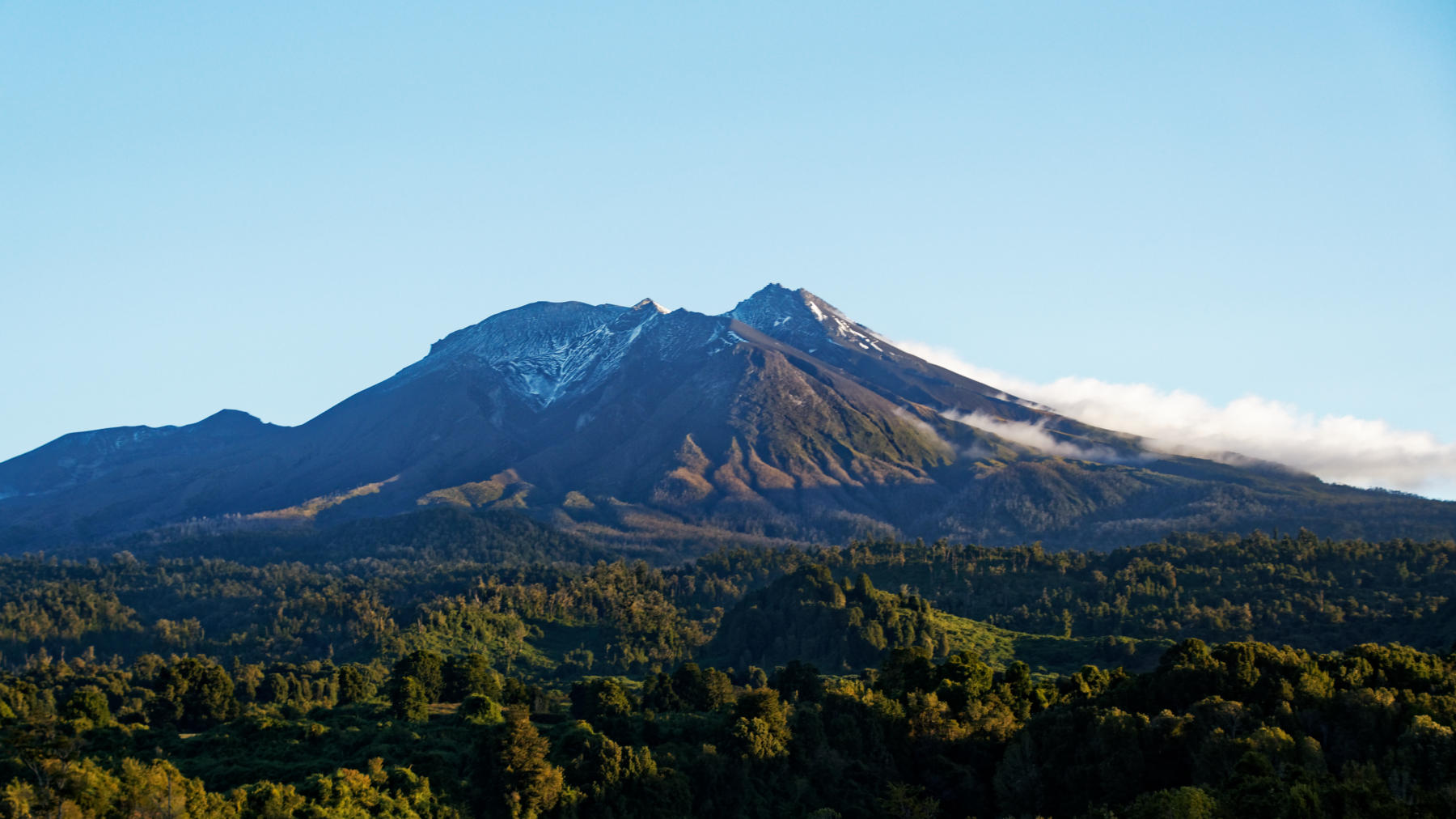 Puerto Varas is a pleasant town. We stayed at the Hotel Cumbres, which styles itself as the best hotel in Puerto Varas, and I see no reason to gainsay this. We had only one day there, and so, since the sun was shining, we decided to go for a wander around. Before we did this, though, we saw an astonishing morning mist on the lake (Llanquihue).

There’s little to make Puerto Varas out as exceptional (the hotel receptionist couldn’t when pressed, suggest a single thing worth visiting), but it’s a nice town, with the colourful buildings that we’ve seen elsewhere in Chile and Argentina. 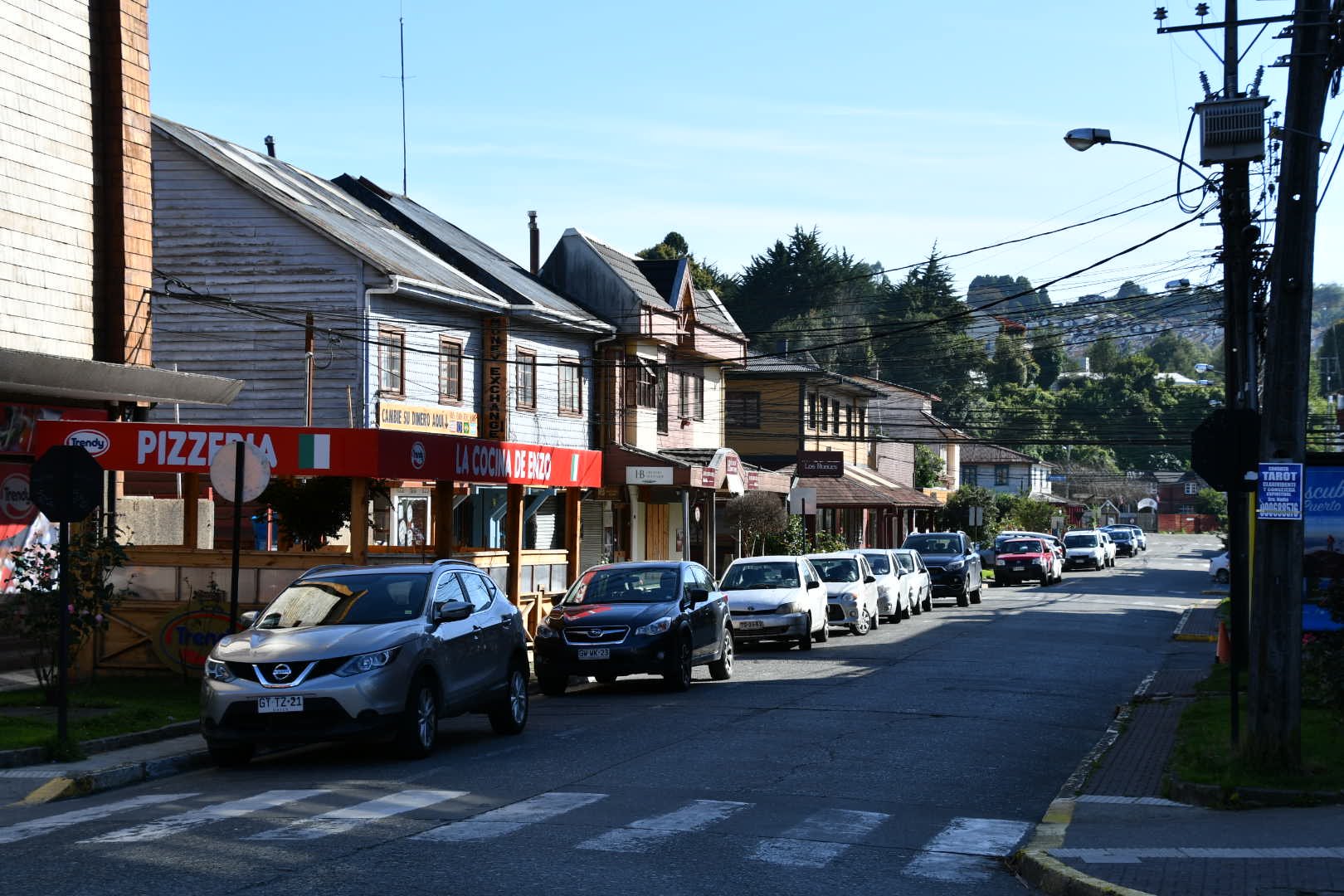 and the same rather alarming approach to electrical wiring. 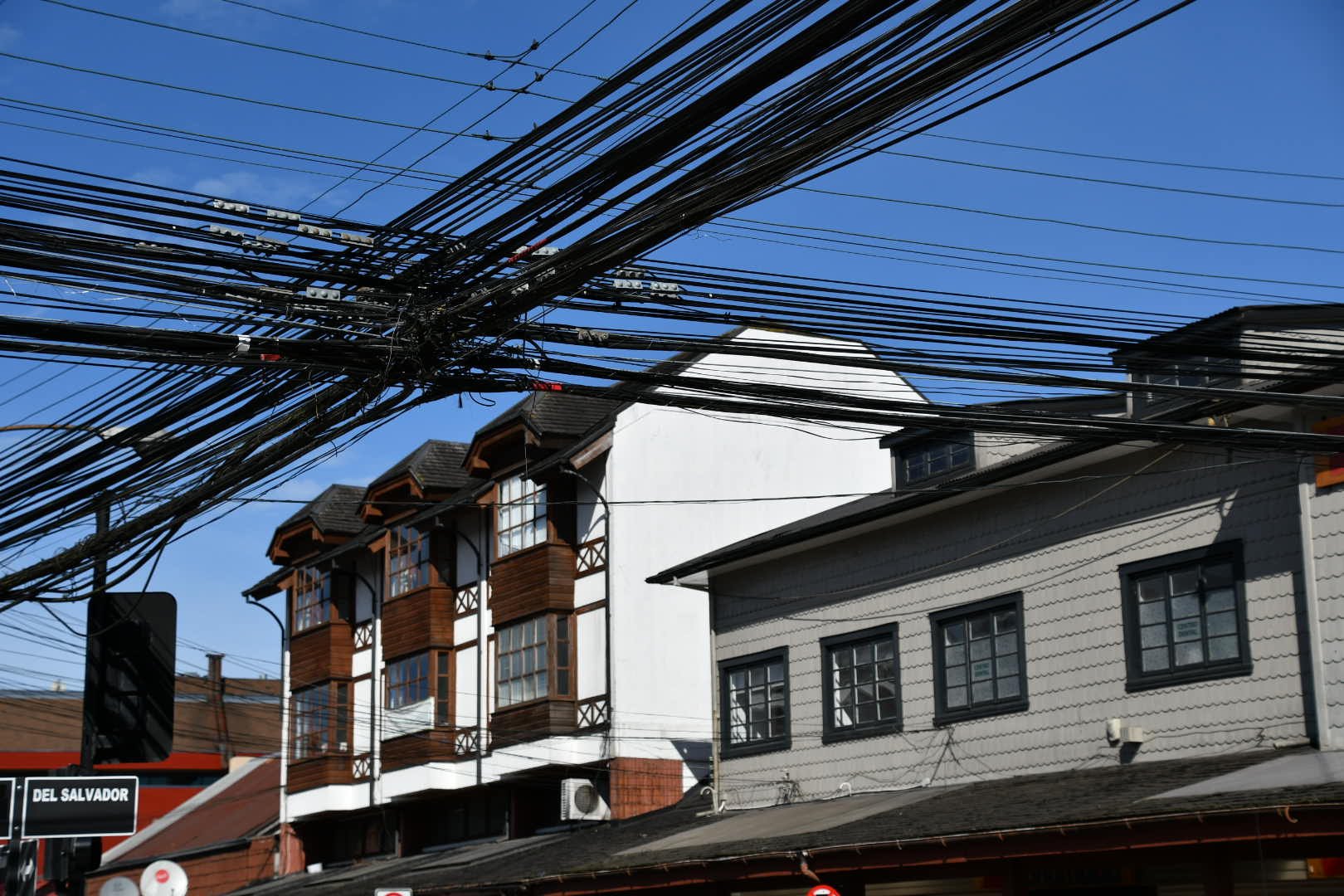 It’s called the city of roses, for good reason 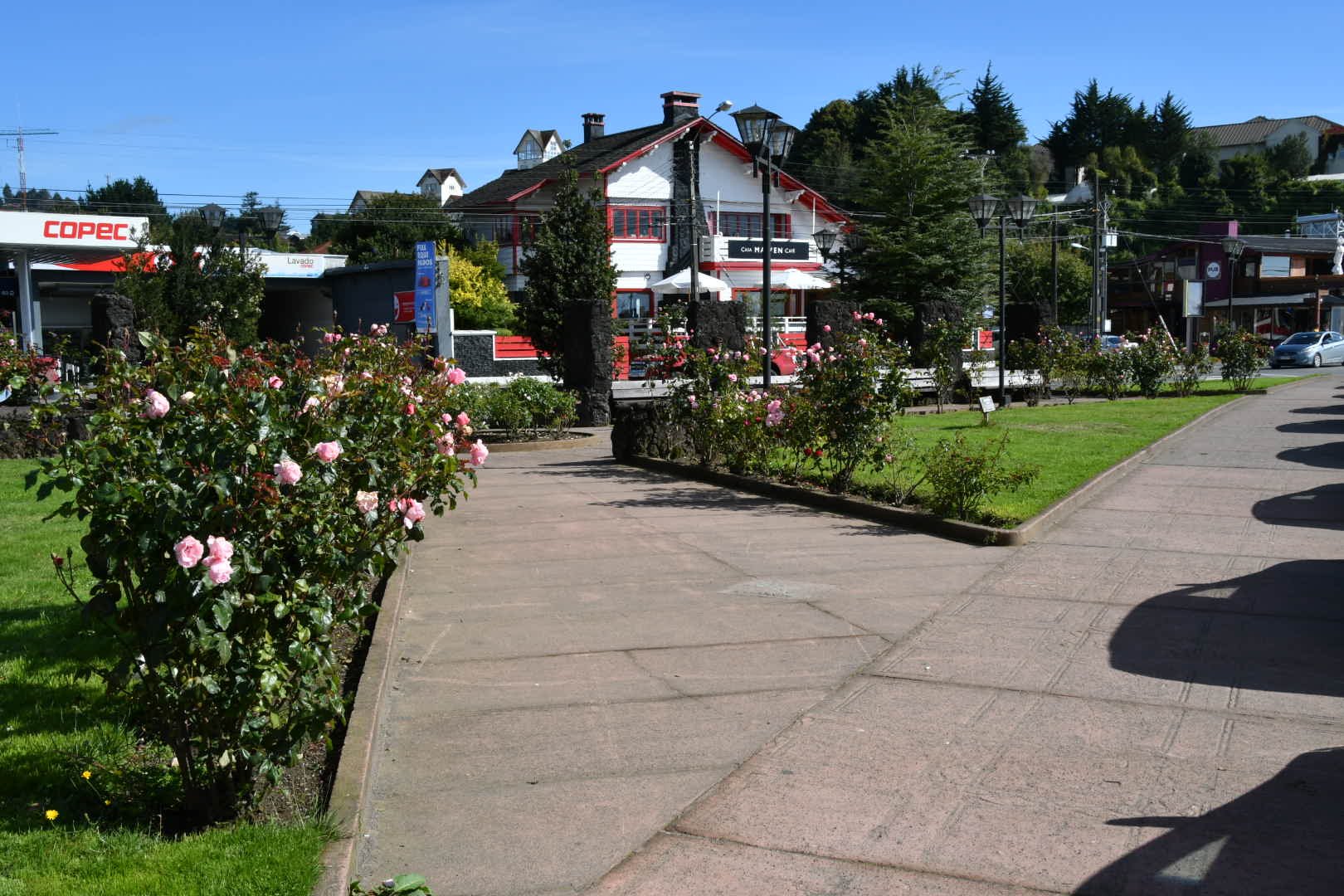 and has, at one end, a hill which has been pressed into service as a park, named after a significant founder of the city, a German called Bernardo Philippi. One can climb the 500 feet to the top, where there is a giant cross, which is illuminated at night. 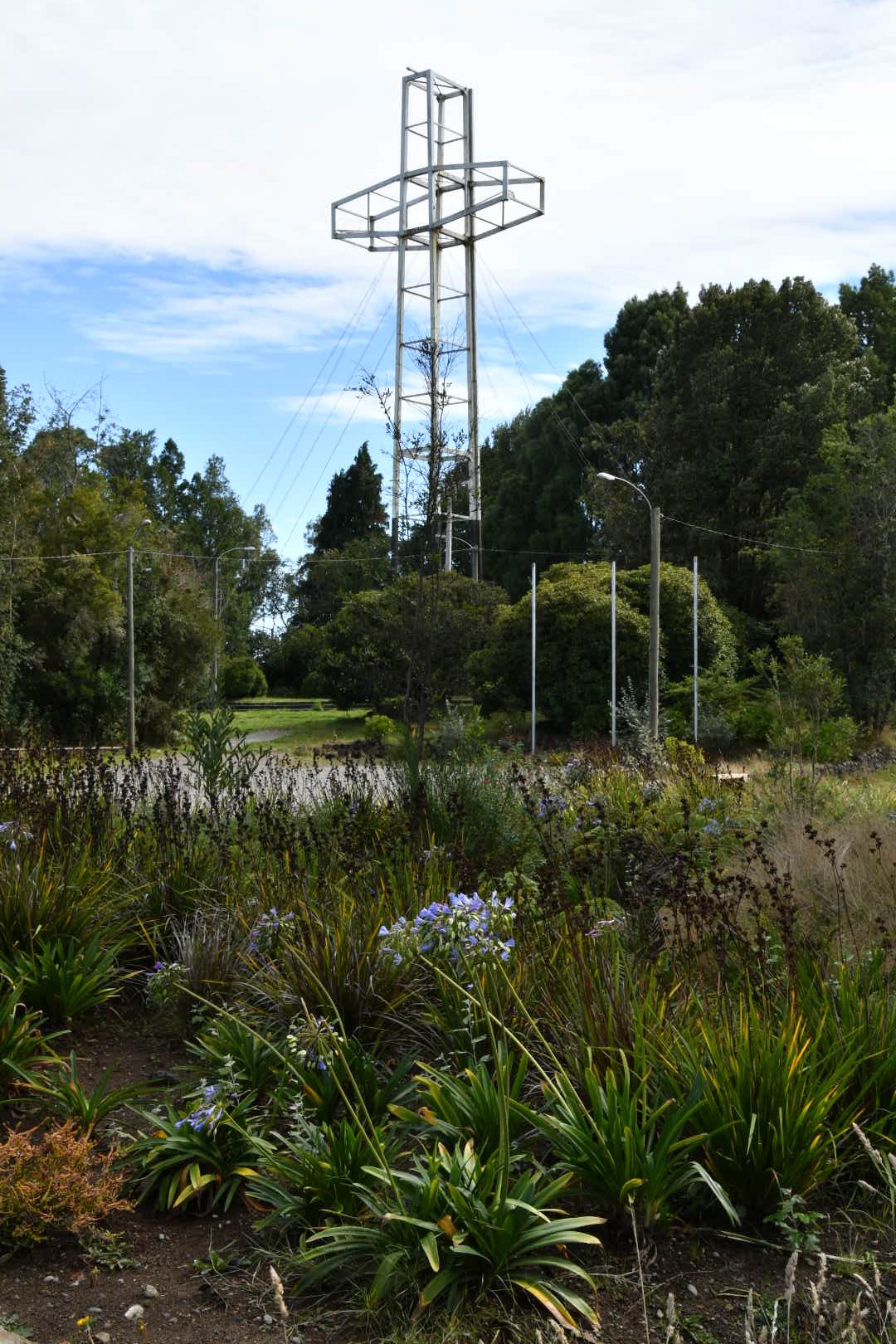 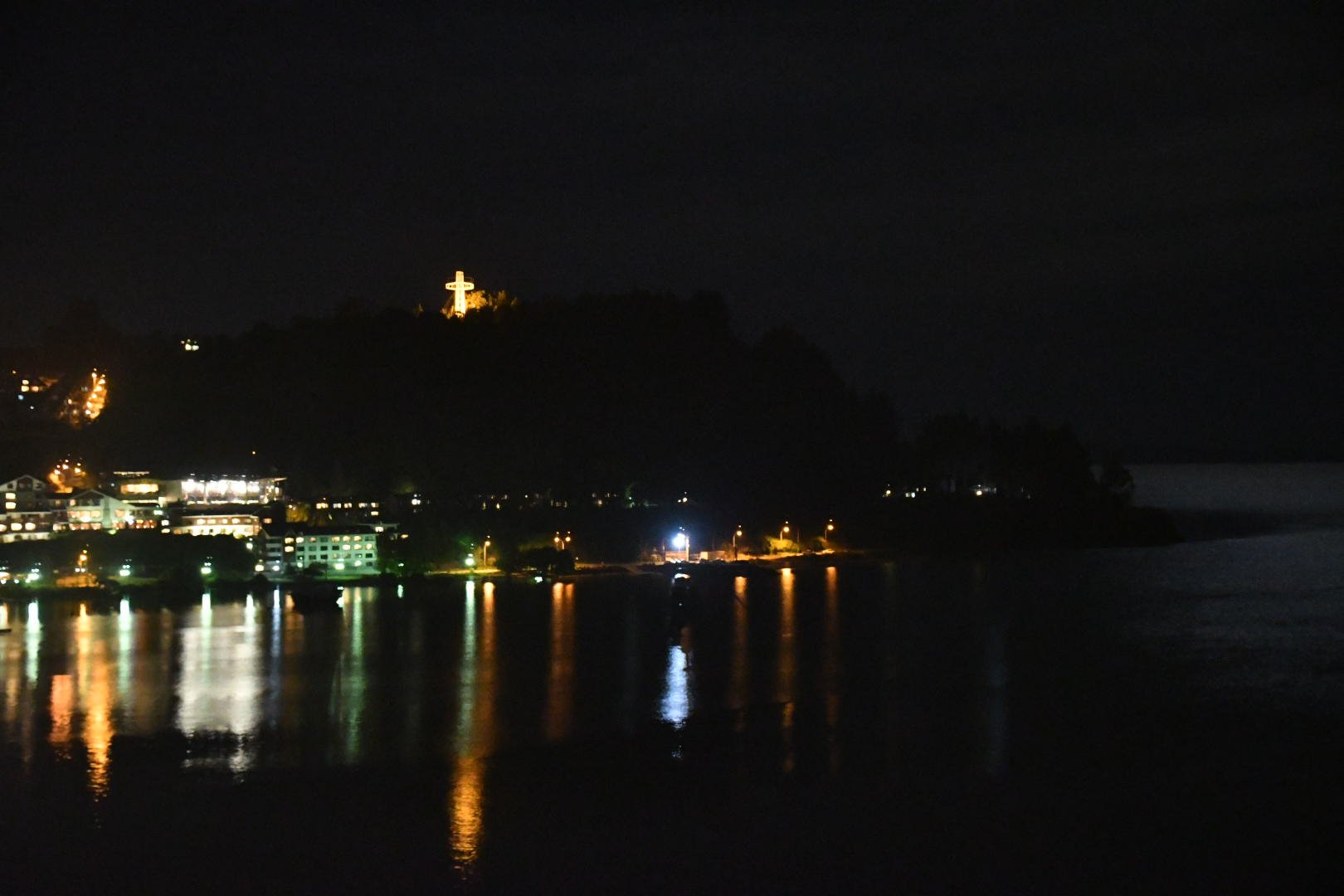 So, this was our transit, from Bariloche to Puerto Varas via Petrohué 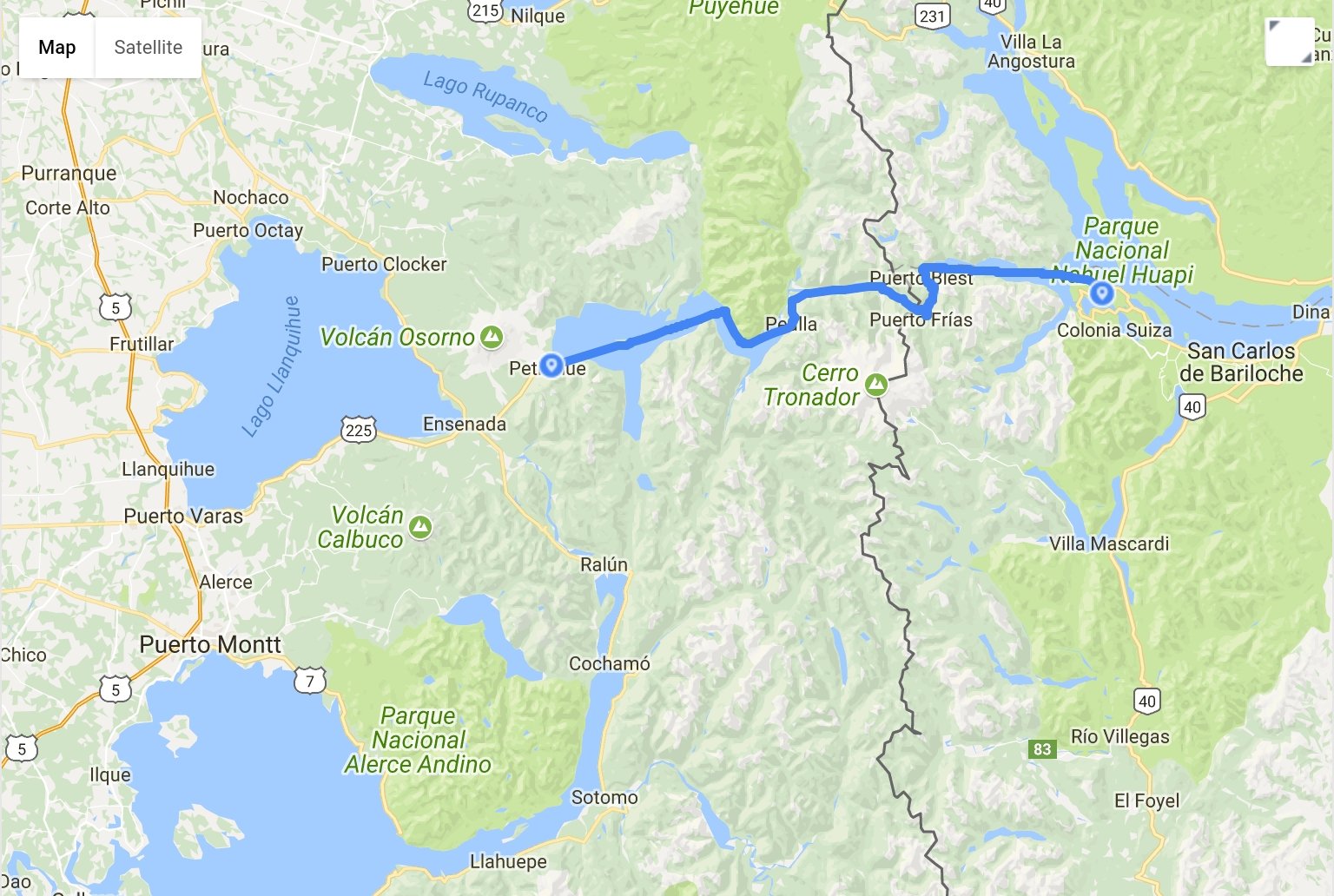 Tomorrow we’re off to Puerto Montt, to fly to Easter Island via Santiago. I’ll report in from there in due course – stay tuned!