After the toils and travails of walking up to Machu Picchu, I was looking forward to some less relentless tourism – a visit to Cusco, the city that was the centre of the Inca empire in its glory days.

The journey from Machu Picchu involved once again catching the train to Ollantaytambo, where we had a chat with a couple from Bristol who were nearer the start of their South American adventure than the end. Remarkably, the train staff, having served drinks and snacks, then staged a fashion show with a view to selling us some fine examples of Andean costumery. I bet no-one told them about this sort of thing during careers guidance at school.

The train journey was followed by two hours of purgatory in a taxi. The driver seemed to be a devotee of a particularly tedious variant of traditional Peruvian music which he started playing to us, unasked. It involved a low-quality synthesised guitar/harp/keyboard background to a couple of guys who mainly shouted things like “Ariba!”, “chicos!”, “Cusco!”, “senoritas”, “cerveza!” and so on, and who very rarely actually sang anything recognisable as a tune. At every change of track, I prayed for some variety, but no – tempo, key and harmonic structure, involving just two chords, carried on unabated. I hope the driver enjoyed the music, otherwise there were three of us in the car who hated the music.

Since Cusco’s altitude, at 3,400m above sea level, is somewhat higher than anything I’d experienced before, I was expecting perforce to have to take things gently. In the event, I didn’t suffer from altitude sickness – but I did suffer from altitude. The visit’s prospect of a full day at leisure, something that we’d come to realise is important to factor in to long holidays such as ours, was thus very alluring.

However, we still had to be ready at 0830 to be taken on a guided tour of the city and its environs – who says tourism is relaxing, eh? We were reunited with Camila, our Sacred Valley guide, and she started off by taking us up to Cristo Blanco – the white statue of Jesus Christ which oversees the city. The site offers an excellent view over Cusco. 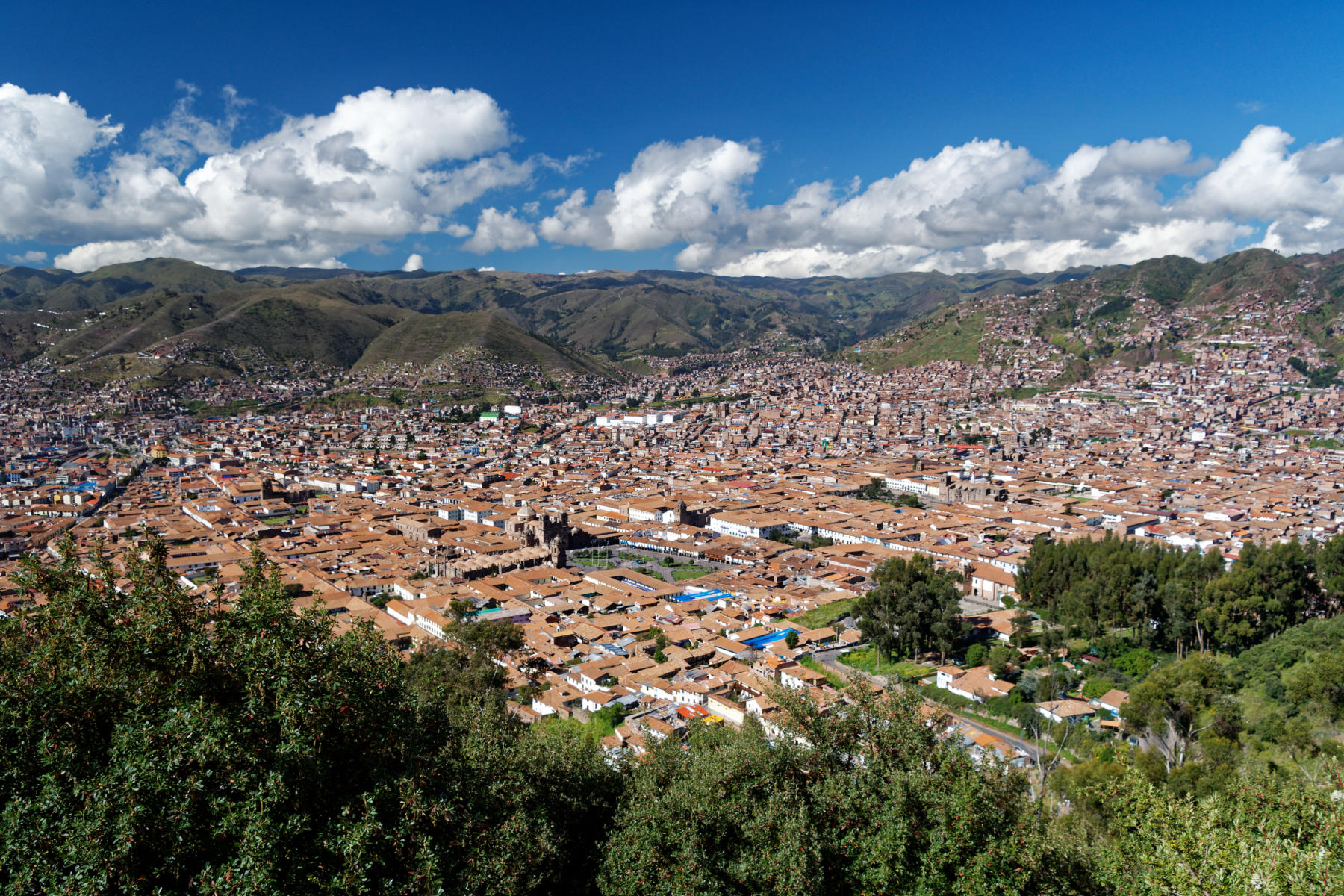 After this, we went to the nearby Inca site of Saqsaywaman. This was a citadel, with sections originally built by the Killke people, with the Incas adding to it from the 13th century. It’s a large site, with two temples either side of a huge plaza, large enough to hold several thousand people for ceremonial occasions. This is a panorama across the huge main Temple of the Sun, taken from the other temple on the site.

(Note: I had to walk up about 30 largish Inca-style steps to bring you this photo, at the top of which I had to sit down for a couple of minutes, since this site is at 3,700m altitude. So, thank you. Thank you for appreciating the effort I’ve had to make to bring you this educational piece.)

As you can see, the main temple is very substantial (indeed, the whole site occupies some 3,000 hectares). The wall is some 400 metres long, and the estimated volume of stone in the temple is 6,000 cubic metres. The stones in the bottom layers of that wall are vast, with the largest estimated to weigh 125 tonnes. 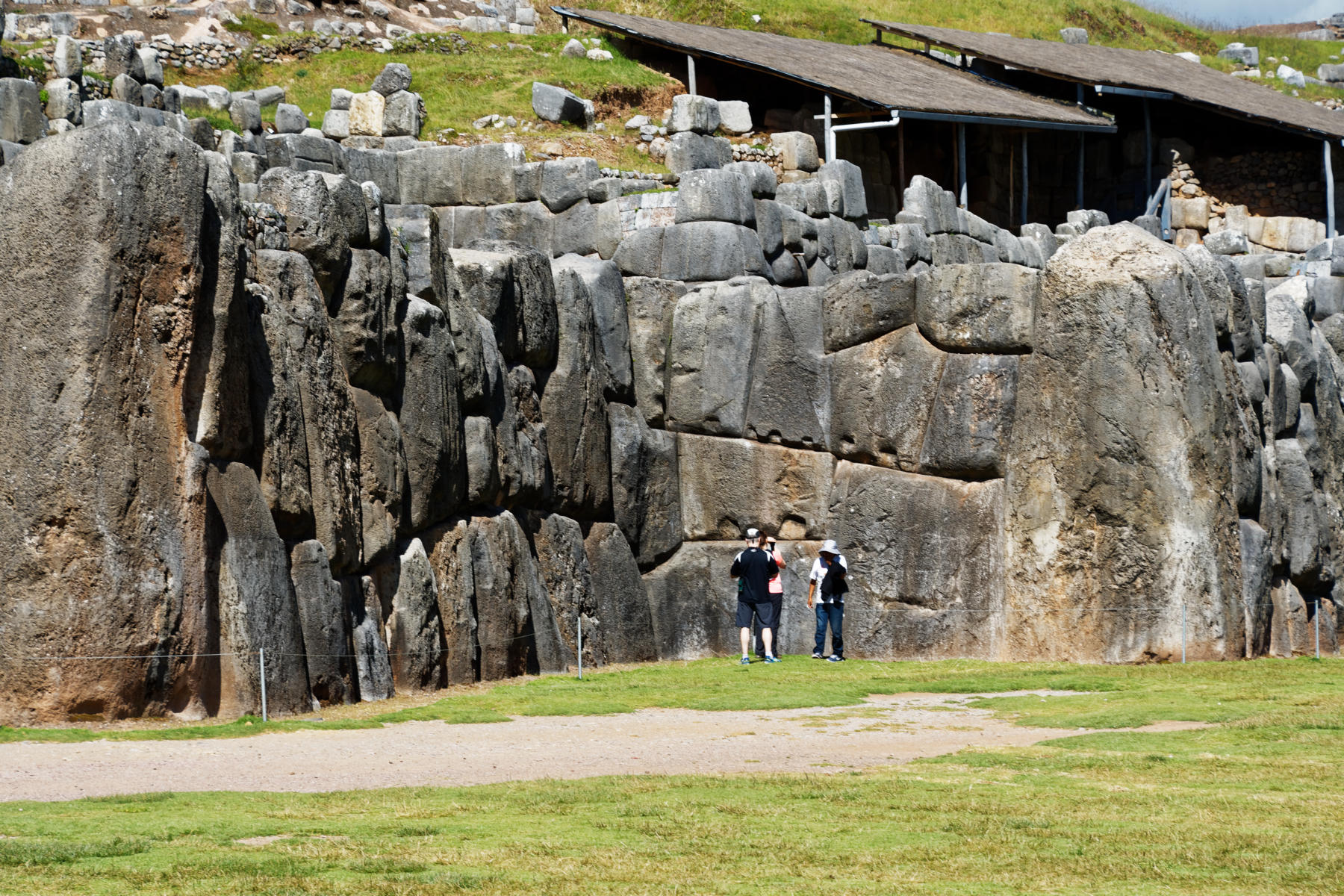 and yet, you can clearly see the precision with which the stones have been fitted together, with no mortar, and no room even to slide a piece of paper between the stones. The precision of construction and the intricacy of interlocking design are thought to have been the reasons that the site has survived Cusco’s various devastating earthquakes.

To remind visitors that there was doubtless a ceremonial aspect to the site involving the sacrifice of llamas, there are camelids on the site, in this case alpacas, both long- and short-haired varieties; we were particularly taken with this cute little one which can only have been days old. 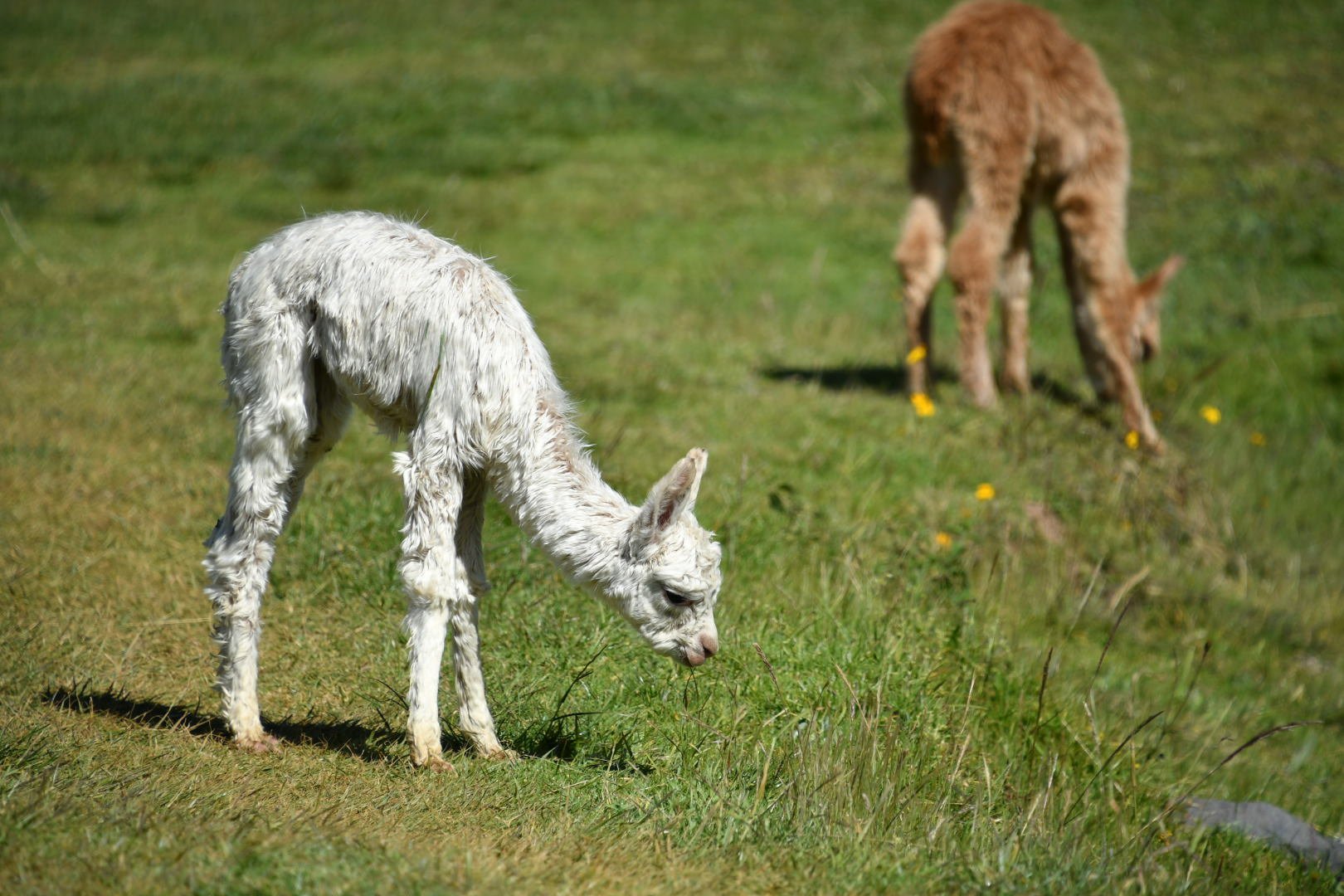 After the visit to Saqsaywaman, it was time to head back into Cusco proper, where Camila took us to a well-known market called San Pedro (in the square outside St. Peter’s Church). 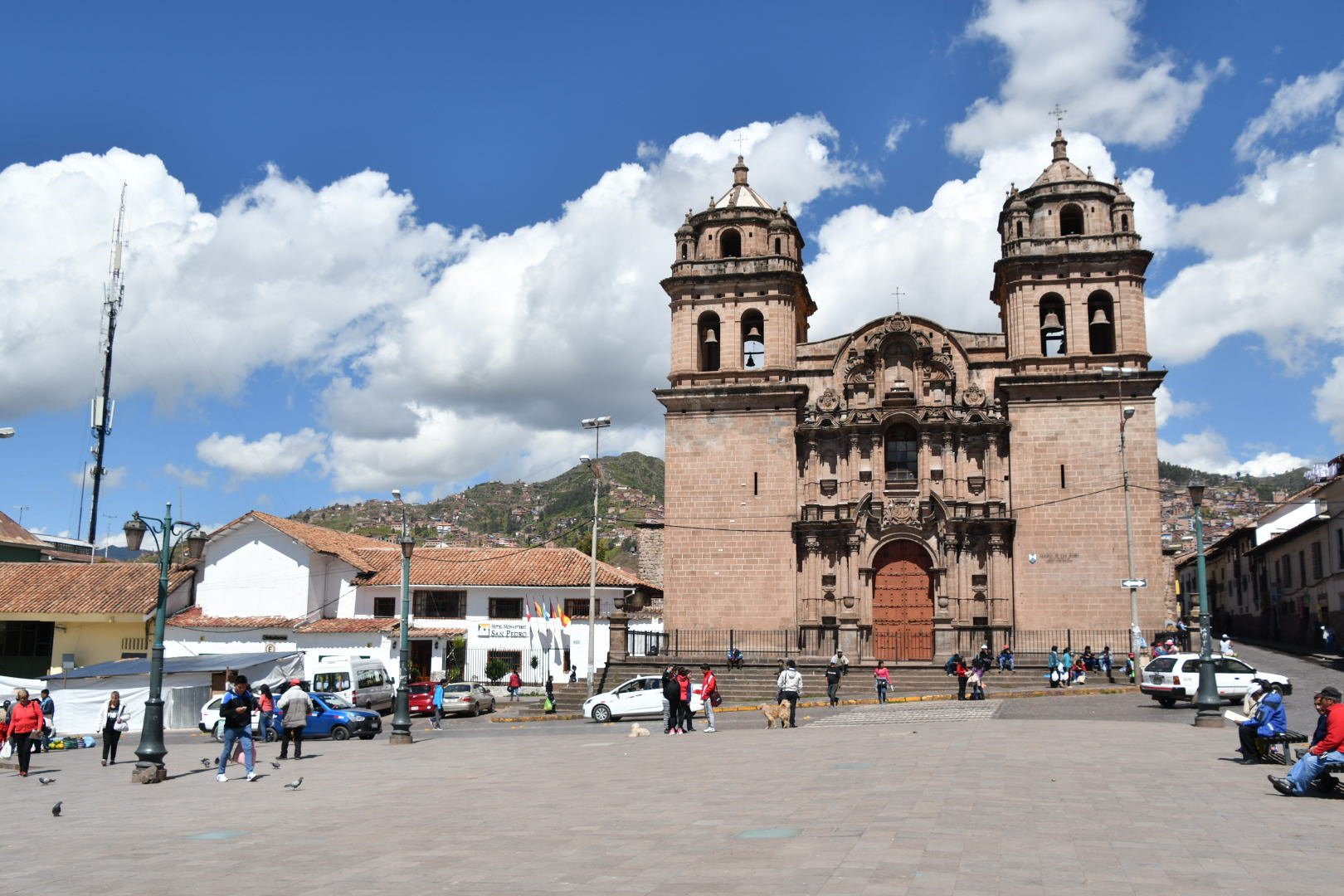 Before going in, she warned us to take only essential items, as the risk of pickpockets was high.

The San Pedro market was similar in concept to the San Francisco market we’d visited in Quito – organised in sections and with a food court – but much larger and more crowded (hence better turf for pickpockets, I suppose – at any rate we escaped unscathed in that respect). Like all such markets it’s very interesting, varied and colourful. 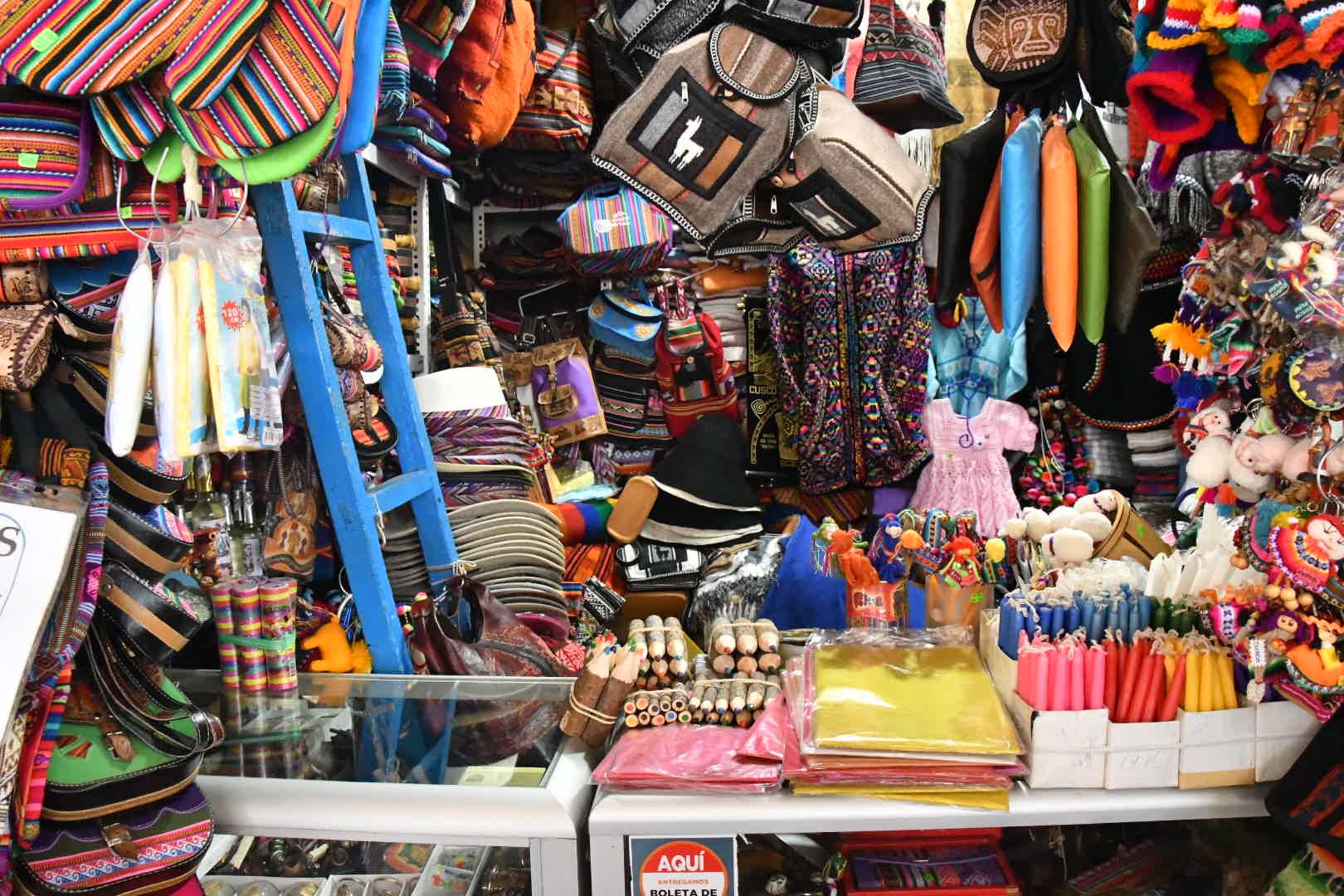 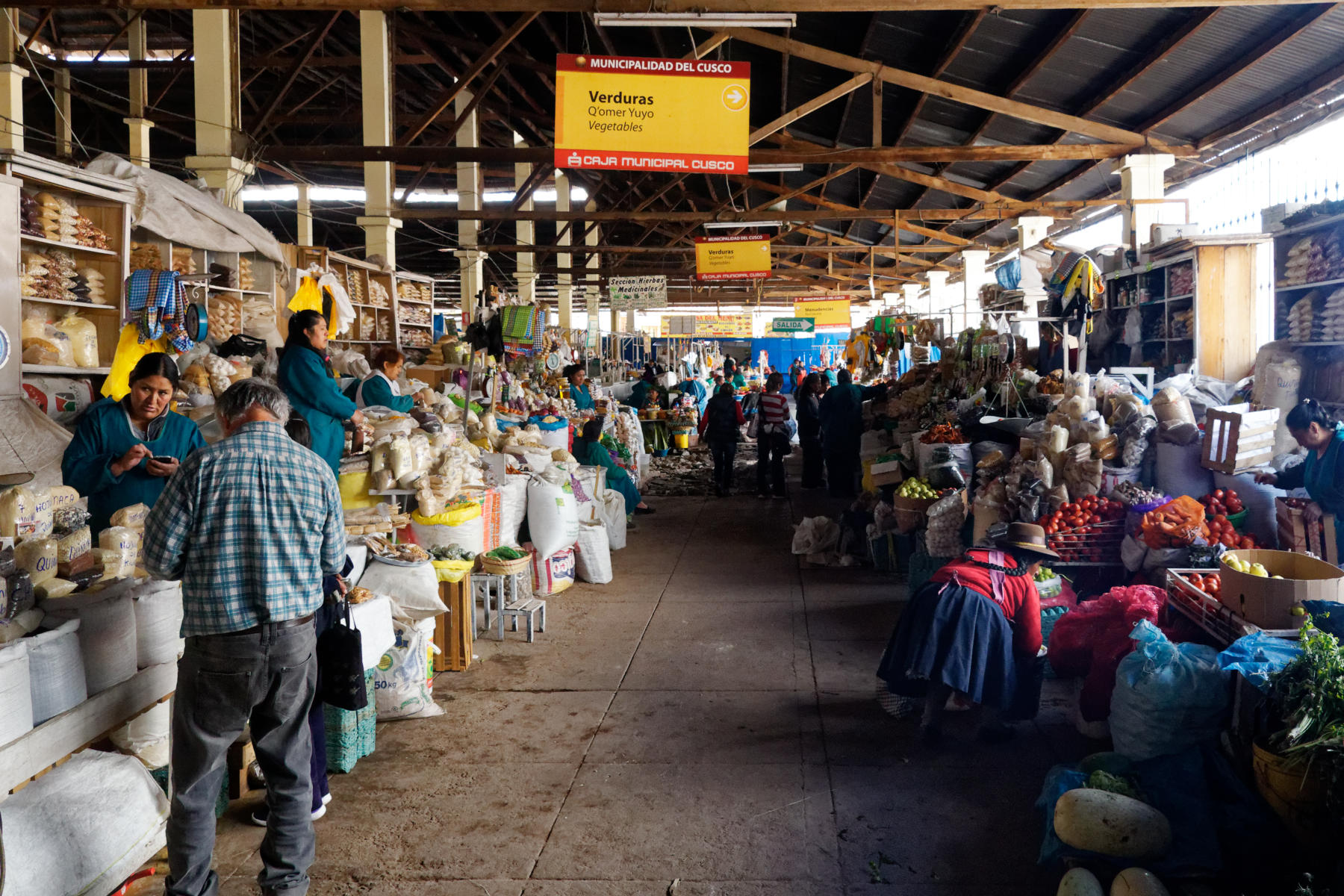 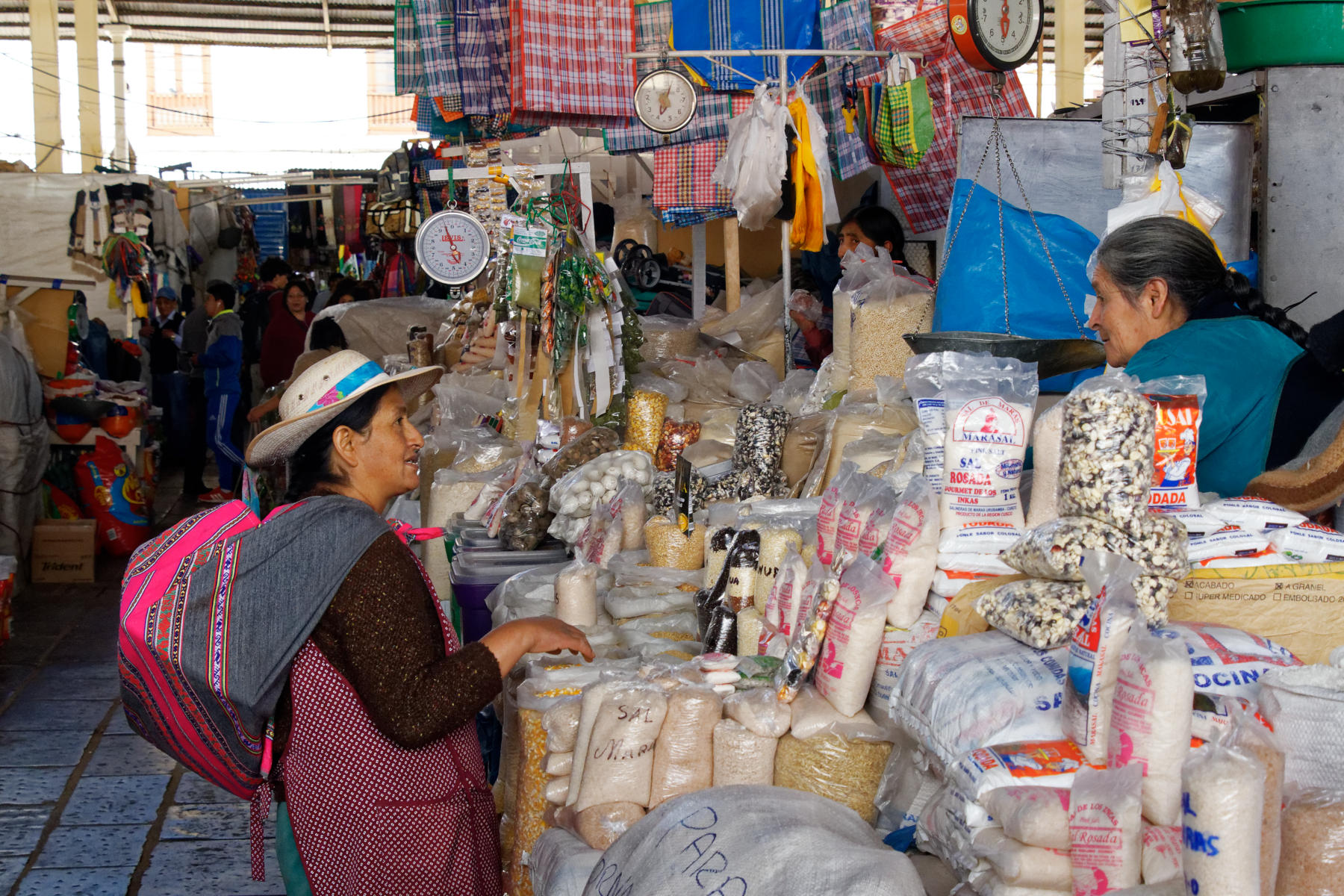 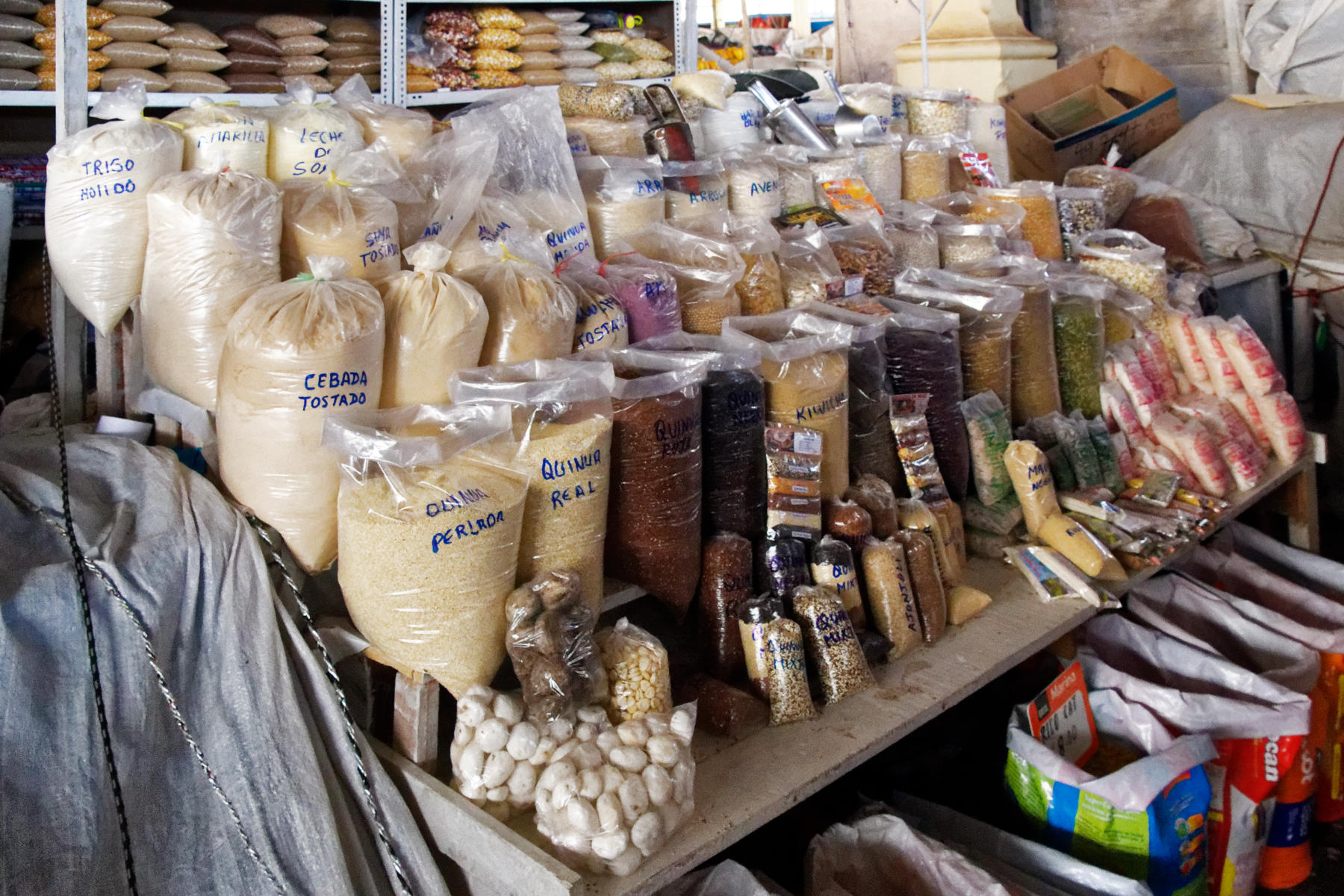 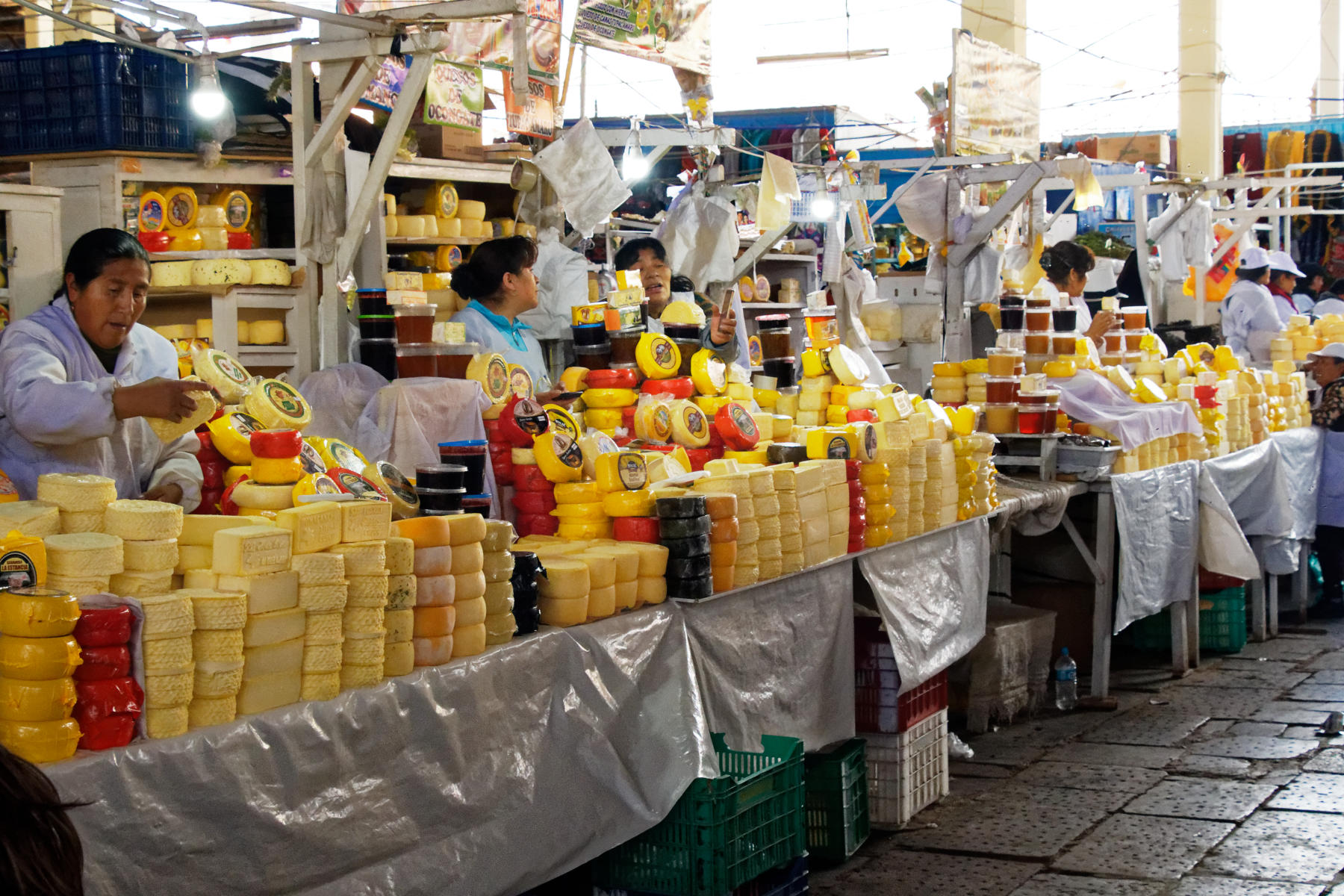 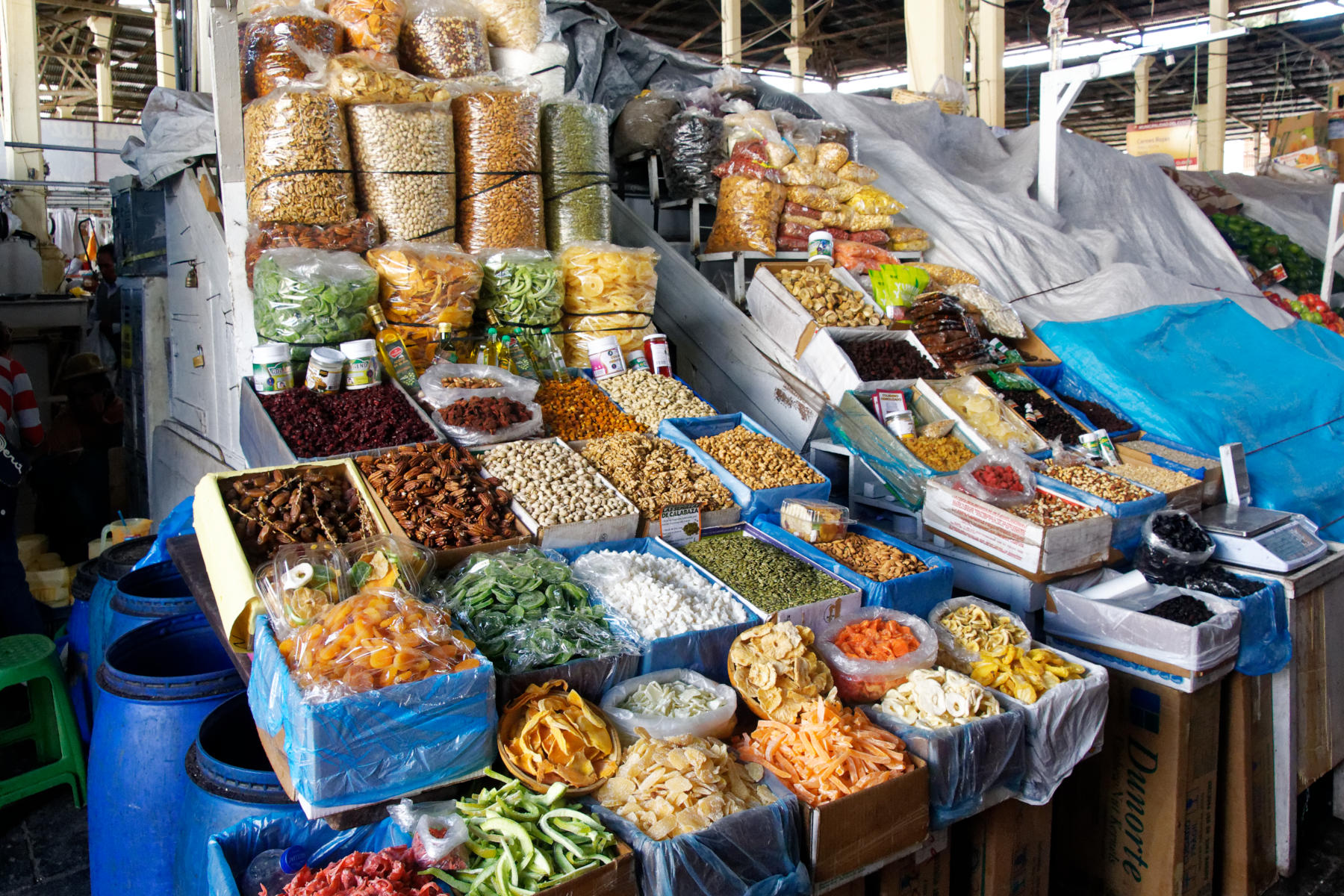 There are plenty of stalls offering fabrics and clothes; and if they don’t have your size, they can easily make adjustments for you there and then. 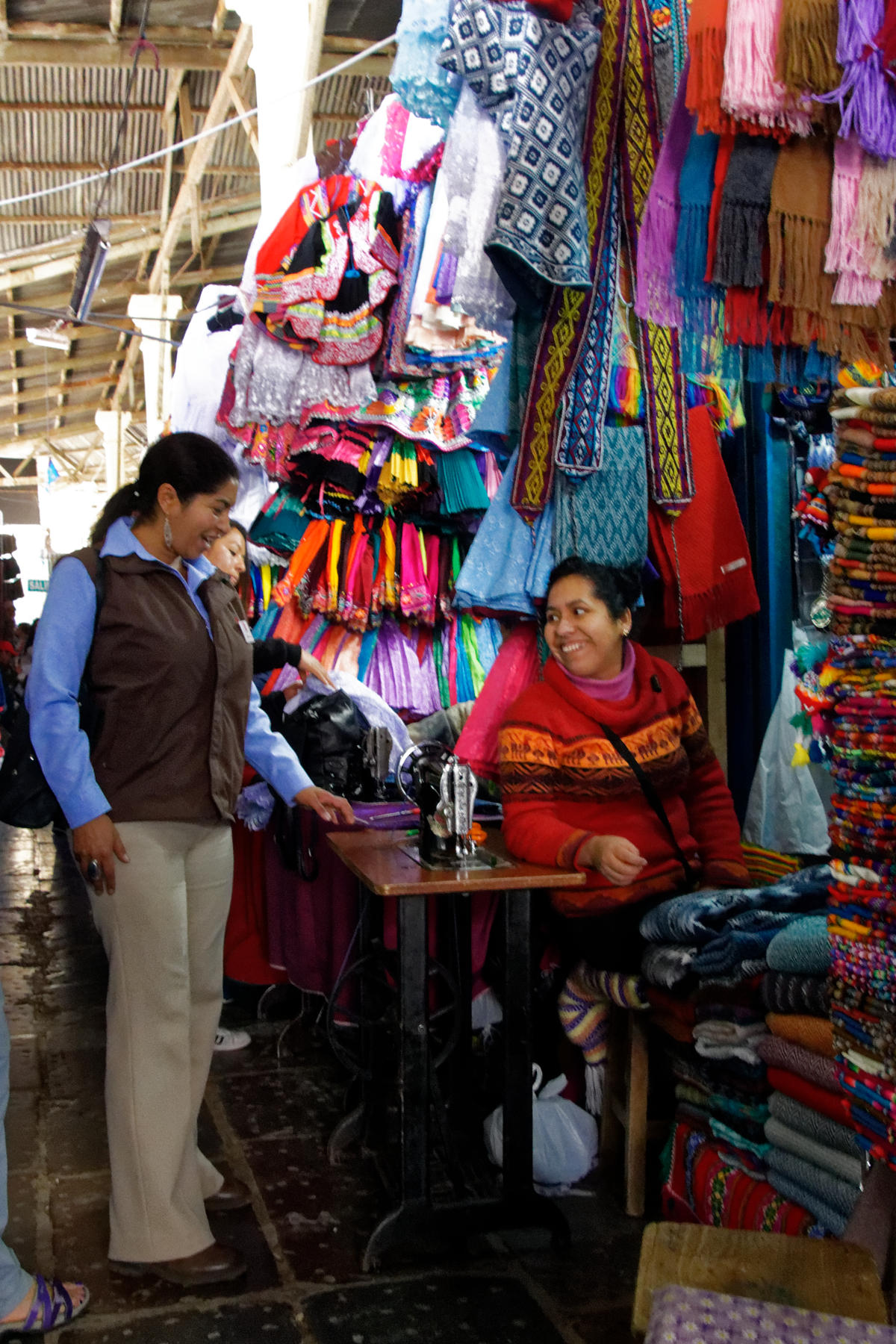 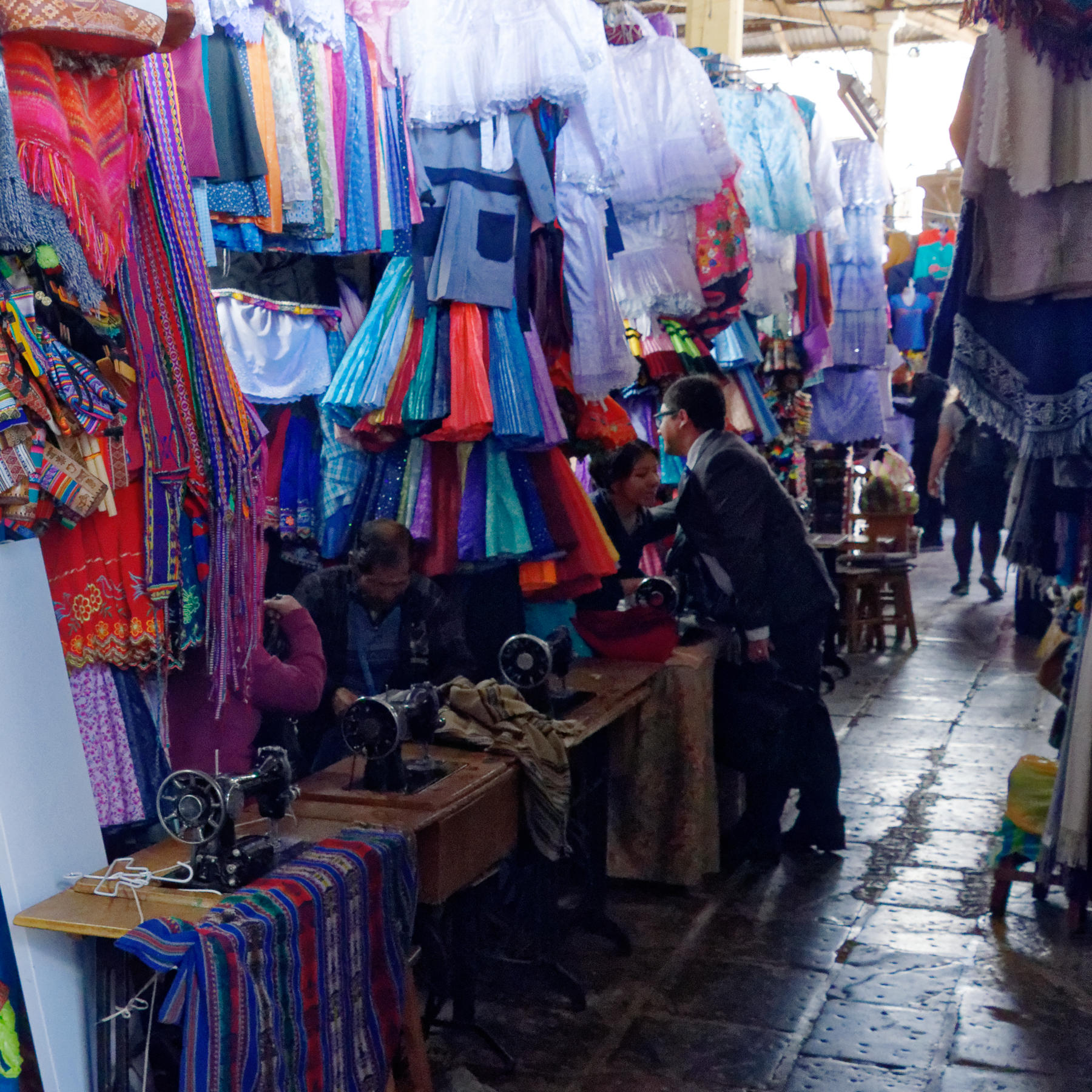 As well as the official stallholders, there are people selling from ad hoc locations just sitting on the floor (they need the relevant stallholder’s permission to do this). This one, for example, was selling cuy (guinea pig), and you could take your pick – raw or cooked! 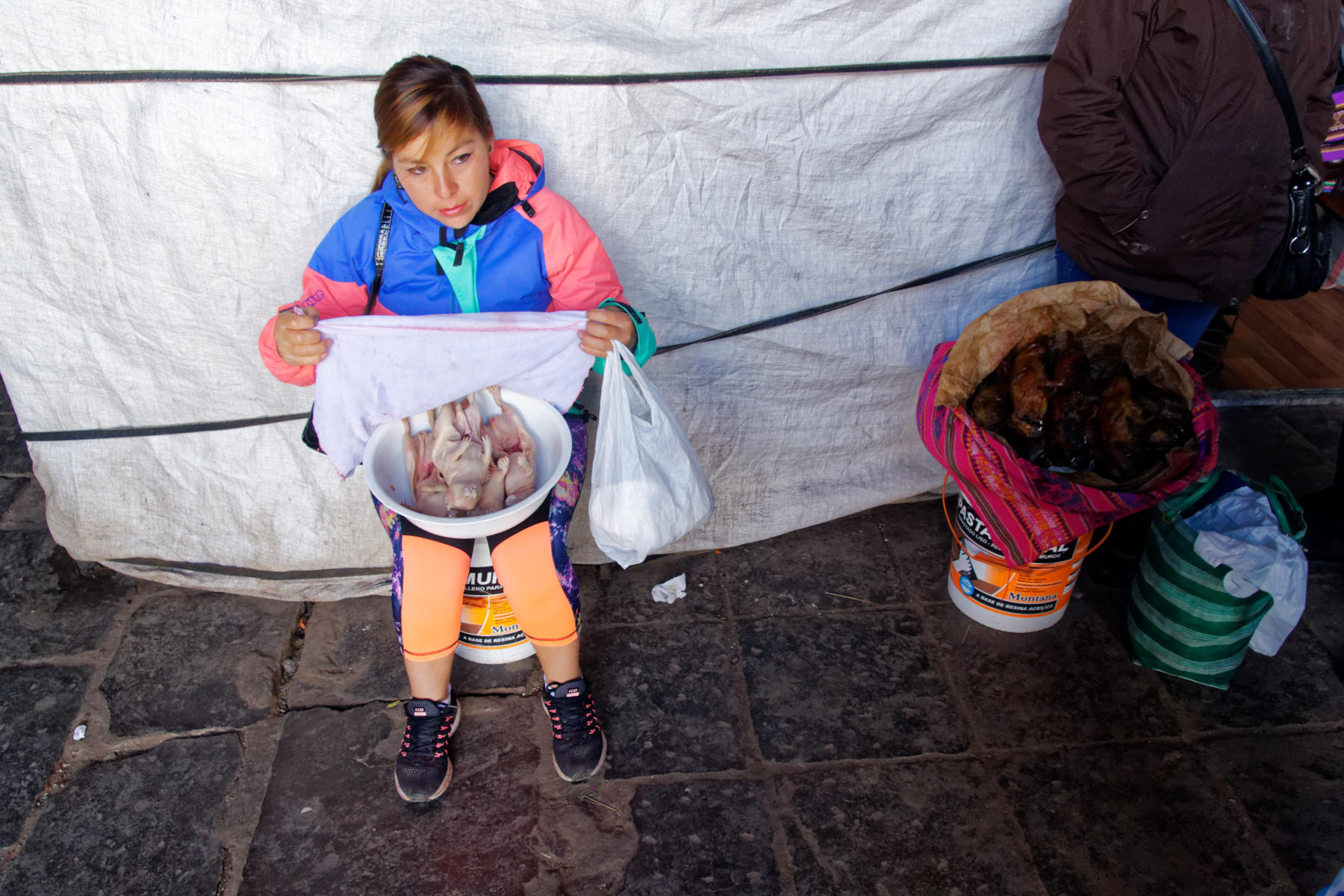 After the bustle of the market, it was time to make things more thoughtful and spiritual, with a visit to a major temple site in Cusco, called Qorichanka. This was the most important temple in the Inca empire (of which Cusco was the capital, as you’ll know, because you’ve been keeping up). 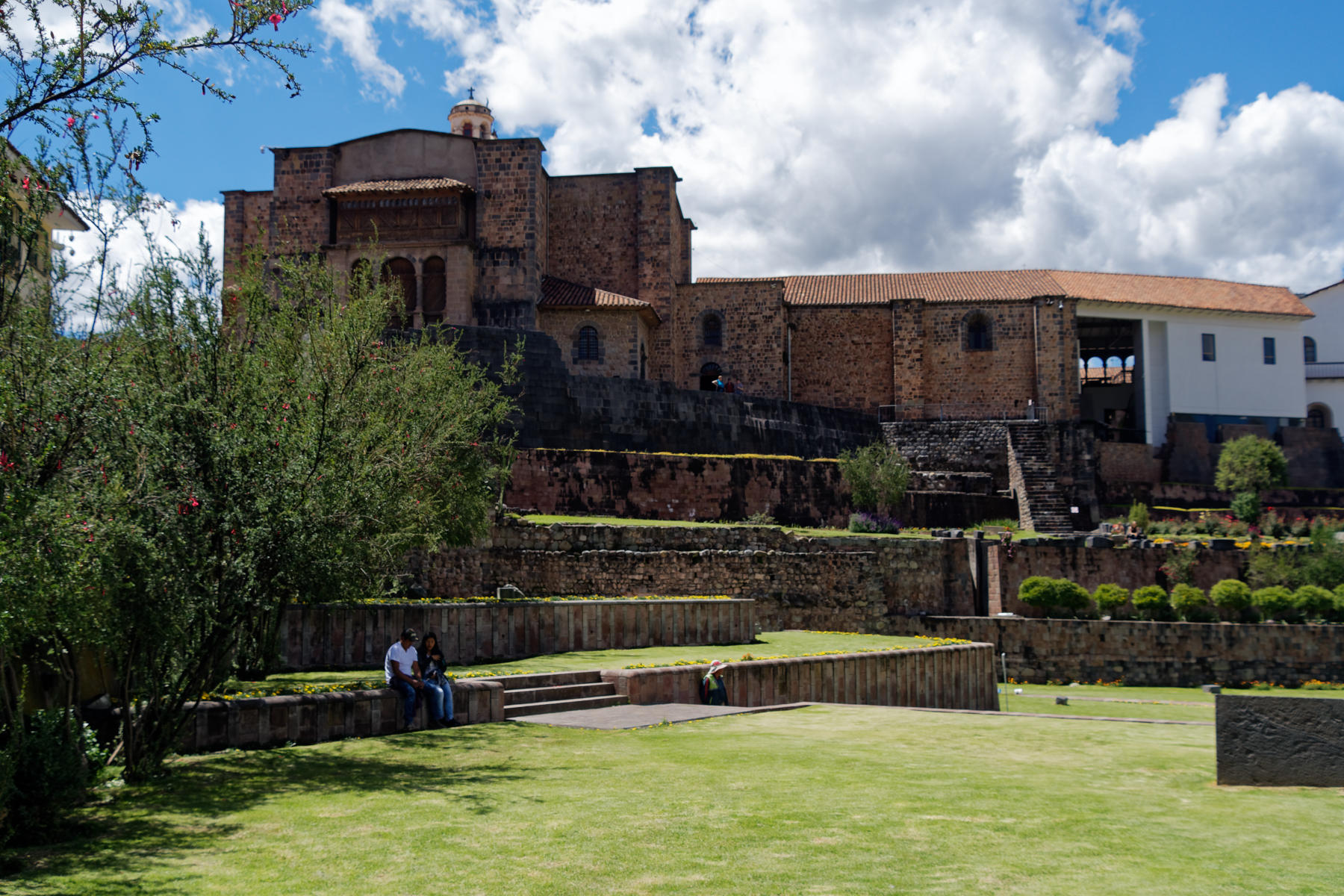 Since this can roughly be translated as “the place with gold”, you’ll not be surprised to learn that it was pillaged by the Spanish when they arrived. Indeed, having stolen the gold, they destroyed much of what was left in building the Church of San Domingo which stands there now. However, some of the original Inca stonework survives, and, indeed supports parts of the church. 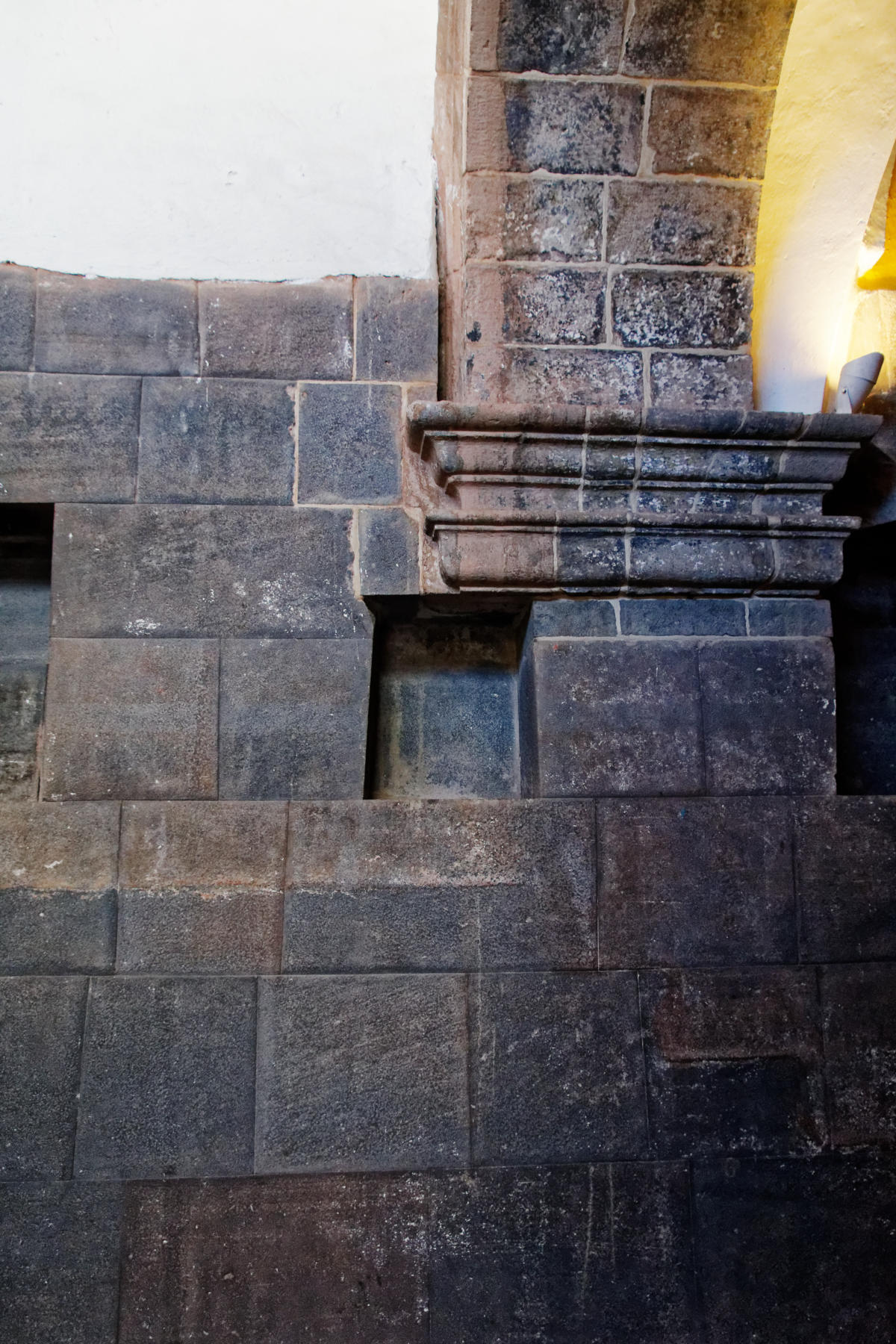 There were three temples on the original site – the Temple of the Sun, the Temple of the Moon and the Temple of Venus and the Stars. The type of stonework was the most sophisticated and labour-intensive sort, called ashlar masonry, involving cuboid blocks of similar size, fashioned to the most exacting standards in order to fit together with complete precision. 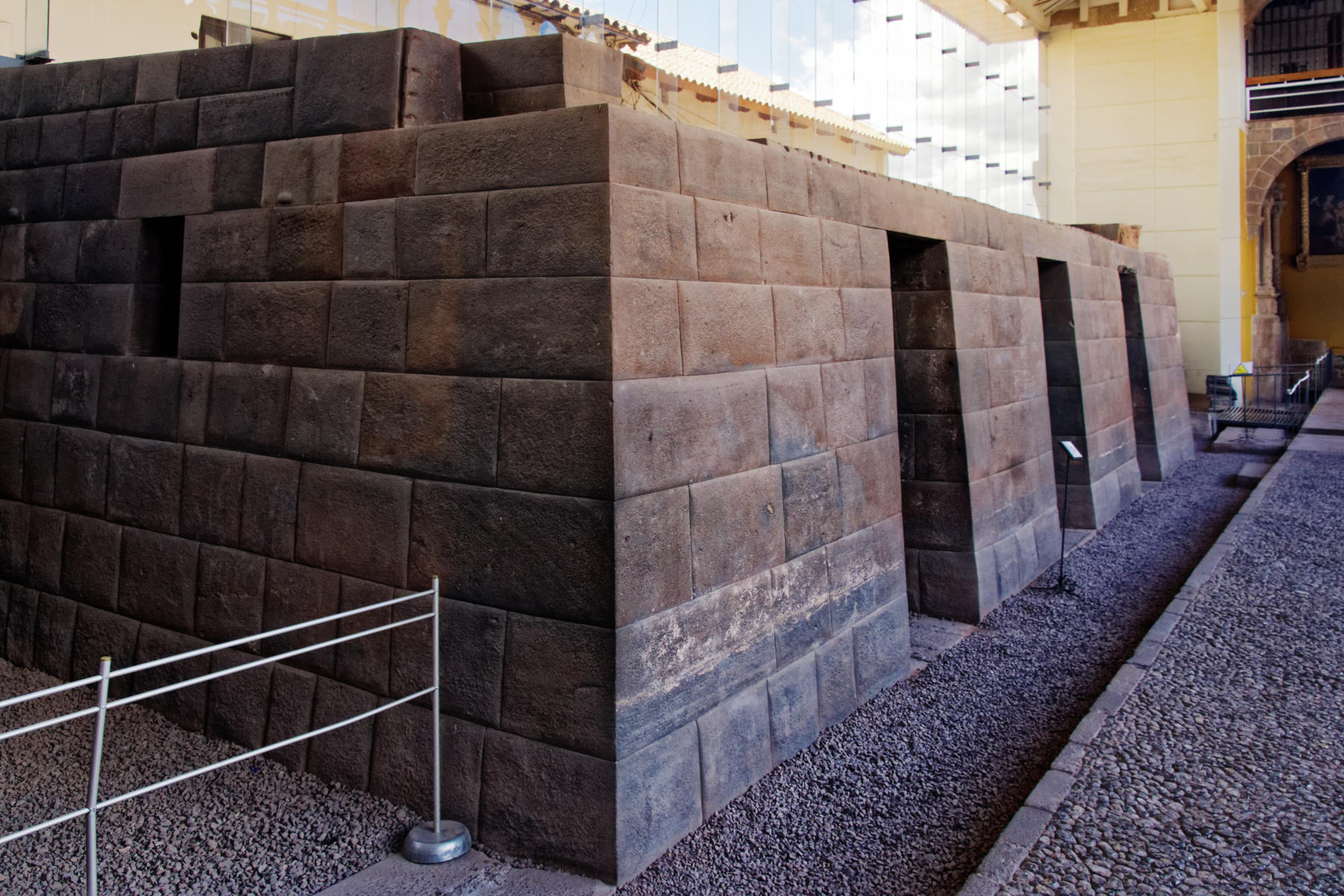 Here you can see the precision involved; even though the lines of the stone are not necessarily completely straight, the fit is as snug as a very snug thing indeed. 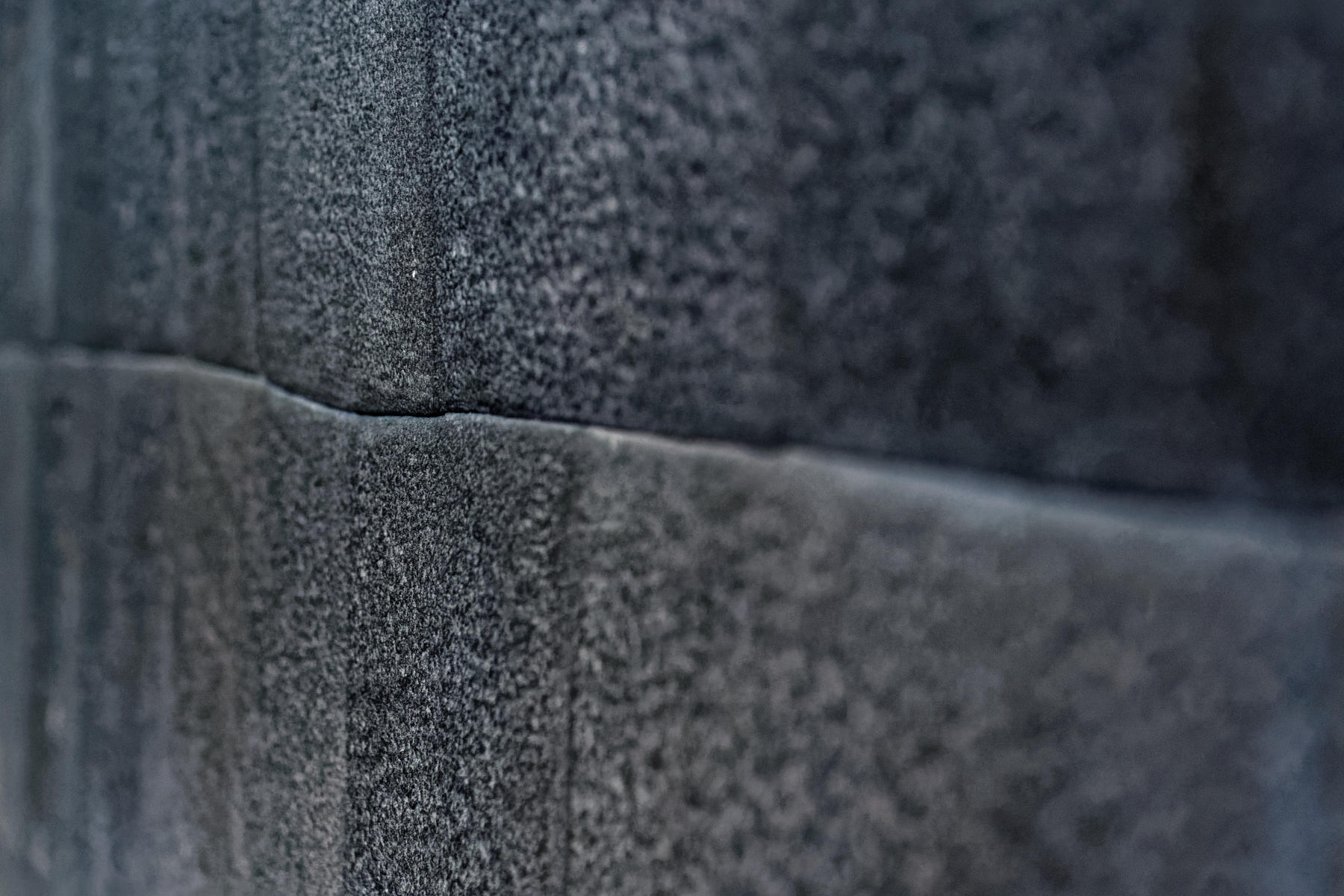 and the precision of alignment of the various components very high. 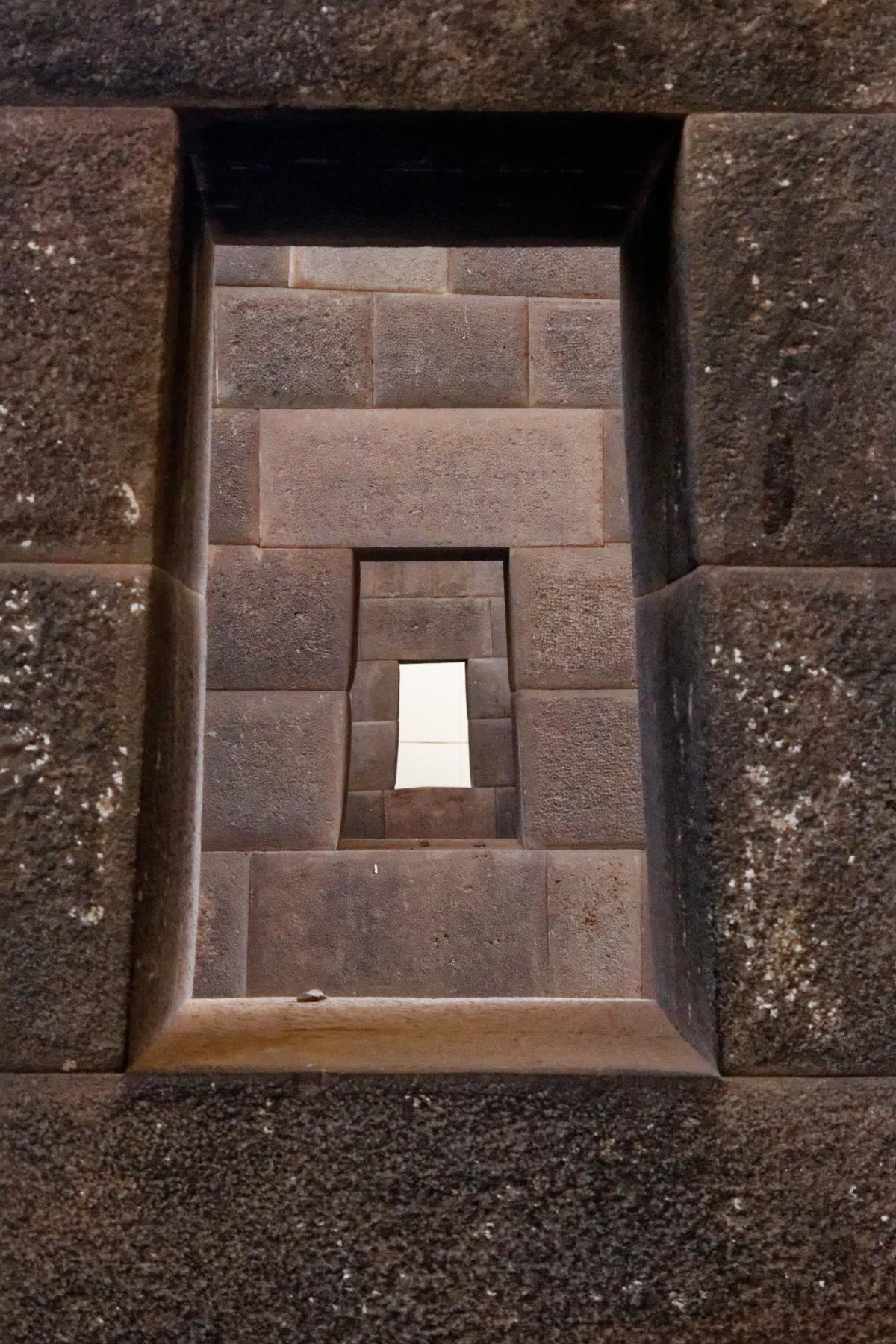 This was why the Inca remains have survived Cusco’s devastating earthquakes, whereas the church has had to be rebuilt. Hah!

Camila pointed out one other feature which underlined how clever the Incas were. As I say, the stonework was made to great precision (indeed, modern “experts” have failed to disassemble the remnants of the temple stonework without damage, trying to understand how the ashlar masonry worked, and have been unable to reassemble it with the original precision). 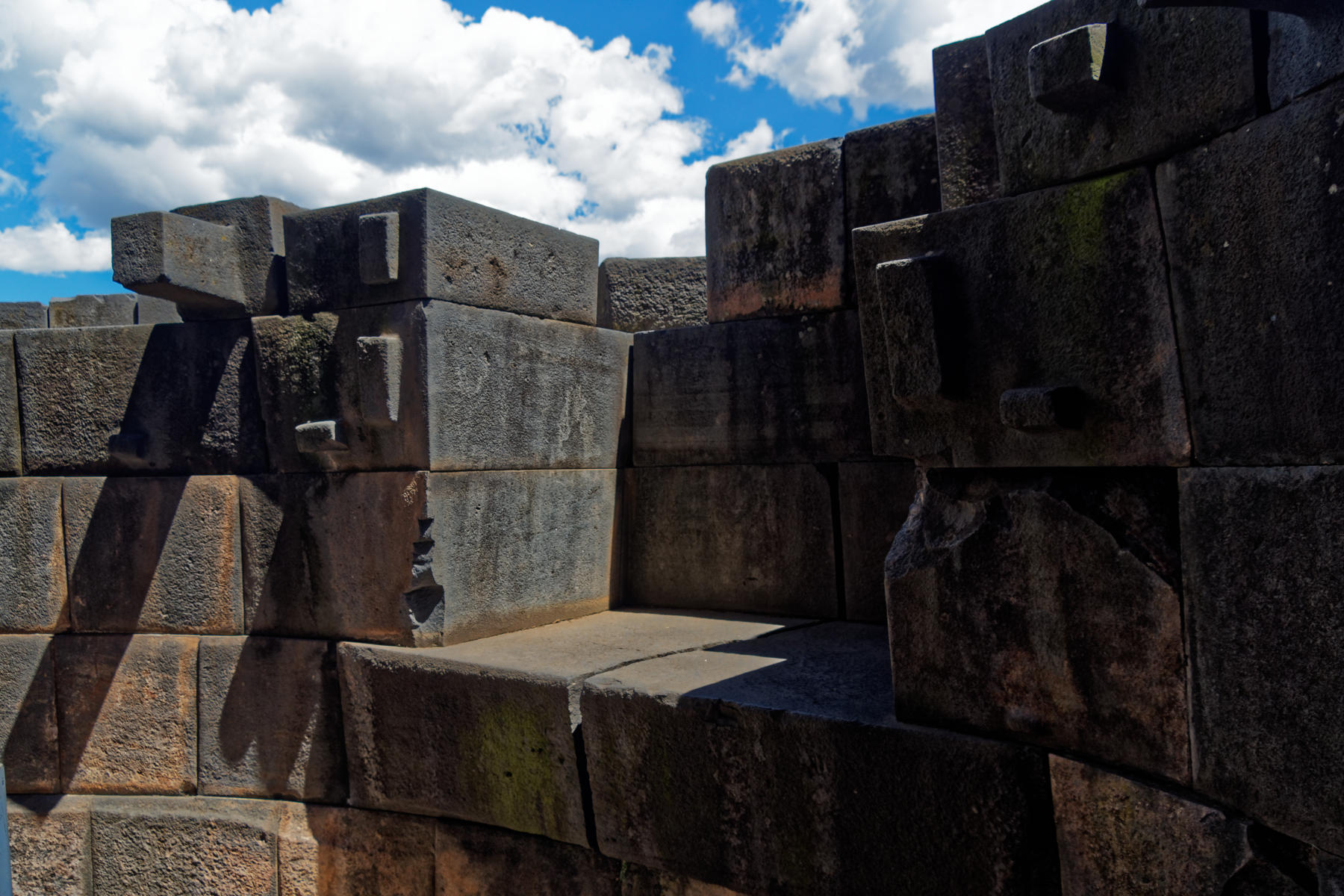 The protuberance top left is actually part of a sundial, very carefully calibrated to allow the Incas to understand the time and the seasons. Clever chaps, the Incas.

We were allowed to photograph as much of the Inca work as we liked, but prohibited from photographing the colonial/catholic religious parts of the site. In theory this is out of respect (cameras can be noisy in use; and there is nothing in the world of photography more dispiriting than seeing someone waving a selfie stick around in a place of worship) and possibly because camera flash light can be damaging, and there are (too many) people in this world who don’t even realise that their camera is using flash, far less understand how to stop it doing so. In practice, I actually believe it’s so they can sell you postcards.

The next place we visited, and the final one on our tour, was the cathedral, on the (handsome) main square of Cusco.

Despite not being able to do anything without sitting down and taking a rest every few minutes, despite the occasionally ridiculous and noisy traffic and despite the difficulty sleeping because of the resonant quality of the hotel plumbing and/or the barking dogs, I liked Cusco a lot. It felt safer, it was more compact, and it had more history to be explored than other South American cities and it has been a pleasure to be here.

A train, a boat and planes lie between us and going home, so stay tuned. But for now it’s time for lunch. (Time For The Bar happened about halfway through the above.)