This is my first ever blog entry and, to be honest, it’s by way of testing the blog capability of my website in preparation for a big trip around South America. The idea is not to brag (although this is an admirable side-effect), but to provide a vehicle for me to record some locations, images and thoughts on the way before I forget everything.
So, to kick things off, I thought I’d try to explain why I use RAW image capture.

Before I do that, I’ll sum up what RAW means for those not familiar. You can skip ahead if you know all about this. If, on the other hand, your object of photography is to get an image online as soon as possible (e.g. for Instagram), you can stop reading right now, because every RAW image needs post-processing before display. (I use DxO Photolab. It’s brilliant, as it automates corrections for many things, such as lens distortions, without my needing to ask.)

When I was stumbling around my photo collection the other day, I came across an image I captured when on a business trip I was lucky enough to visit the Taj Mahal. (It’s a fairly brutal experience, by the way, but worth it.)

Here is an image I captured, straight out of the camera (Nikon D300S)

It’s OK, not brilliant, but the weather wasn’t brilliant. It’s a nice record of the place.

Now, let’s have a look at the RAW picture. This has had minimum processing to produce the image:

There’s not a lot of difference, frankly – because I hadn’t asked the camera to do anything with the image, the improvements over the out-of-the-camera image are subtle. If you look carefully, you’ll see that there’s a broader range of colours, for example.

However, if I use the wizardry of Photolab, we can get a startling improvement:

I believe that this has got the maximum out of the image. Yes, you can use Photolab on the JPEG: 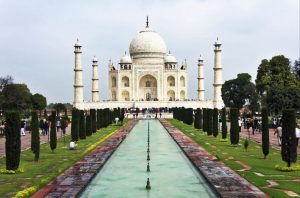 But I don’t believe it’s as good an image: the colours in the paving and the grass are wrong; the image looks a bit more garish. Now, if that’s your taste, then fill yer boots; but I prefer to have the version that has all the edits in it that I want. And I’m prepared to invest the time to do this.

It’s considerable, but it’s worth it, don’tcha think?