There has been a settlement on the site of the modern town of Starigrad (“Old Town”) since Roman times. Until the tourist boom of the 70’s it was a small village whose inhabitants decamped during the summer months with their sheep and goats to summer pastures in the mountains, travelling up in May and back in September or October, depending on the altitude of their pasture. Our walk today followed one such path – although calling it a path is pitching things a bit high 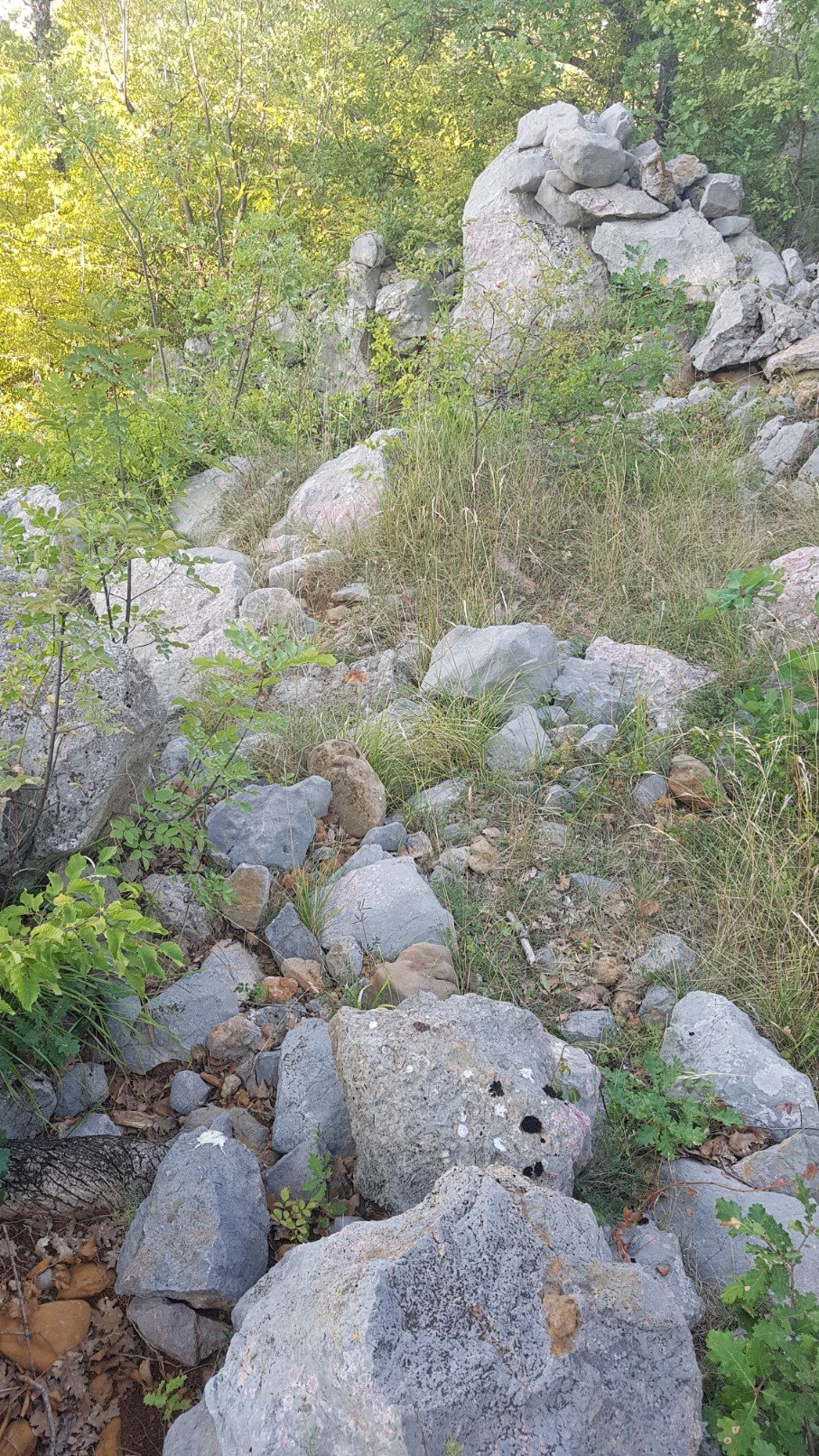 as it is only barely distinguishable from the surrounding rocks! We started early but still toiled upwards in direct sun 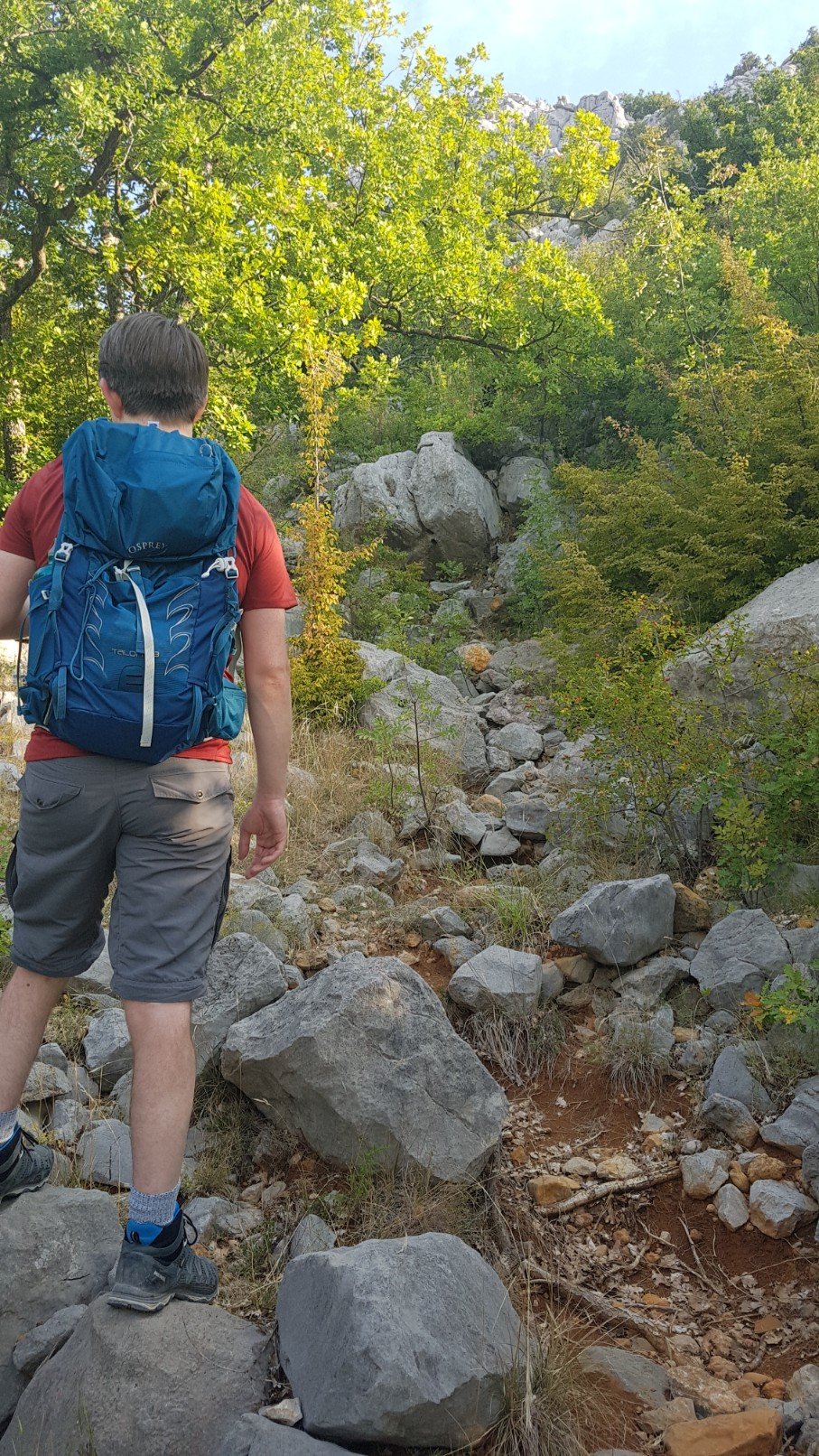 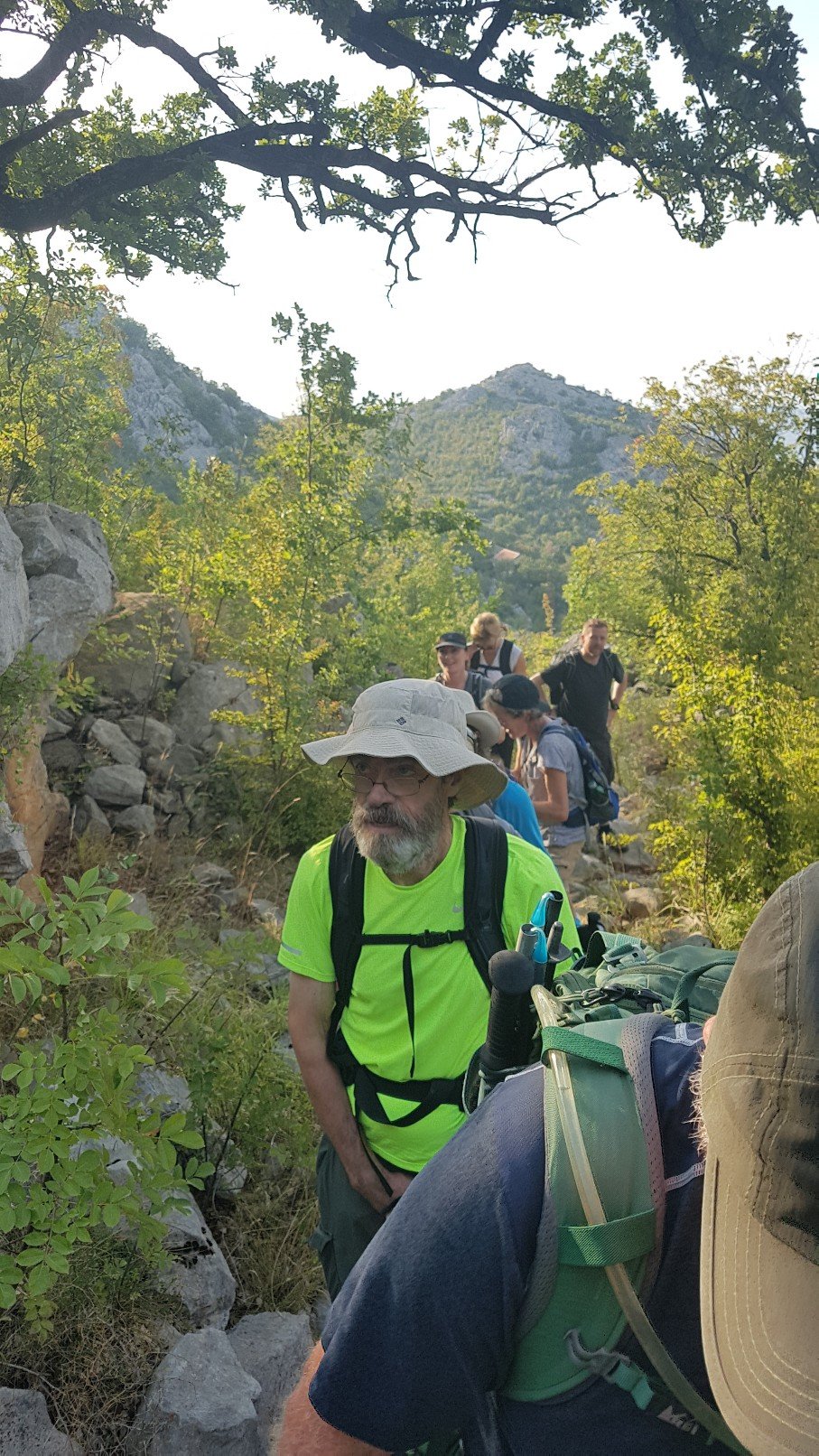 Our guide Zeljko had spent two summers as a shepherd in the mountains while he was at university 35 years ago, helping an elderly couple whose sons had taken conventional jobs, and he explained that everything needed was hauled up by mule or donkey, and people lived – and died – in the mountains. If somebody died a party of 6 men carried the body down the trail, since as devout Catholics the body had to be buried in consecrated ground with due ceremony; and church, priest and cemetery were in the village far below. The pall bearers were only allowed to put the body down to rest at certain spots (just one place on our route, about half way down) and the resting place of the body was marked with head – and foot – stones. Later flat slabs would be laid at the spot, and such “graves” can be found on various trails on the mountains. 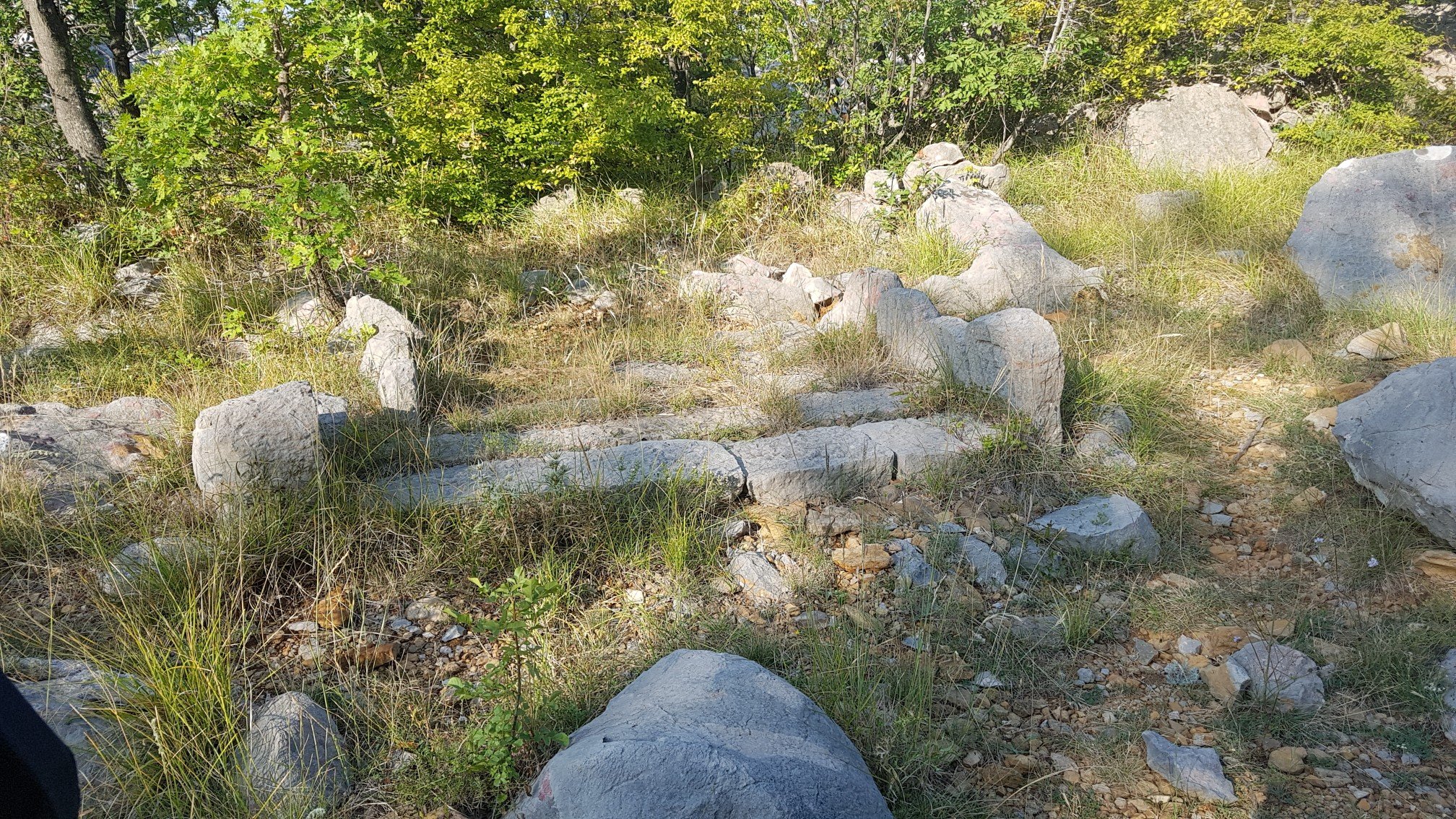 Headstones would be marked with some arbitrary design or shape since the people were illiterate. 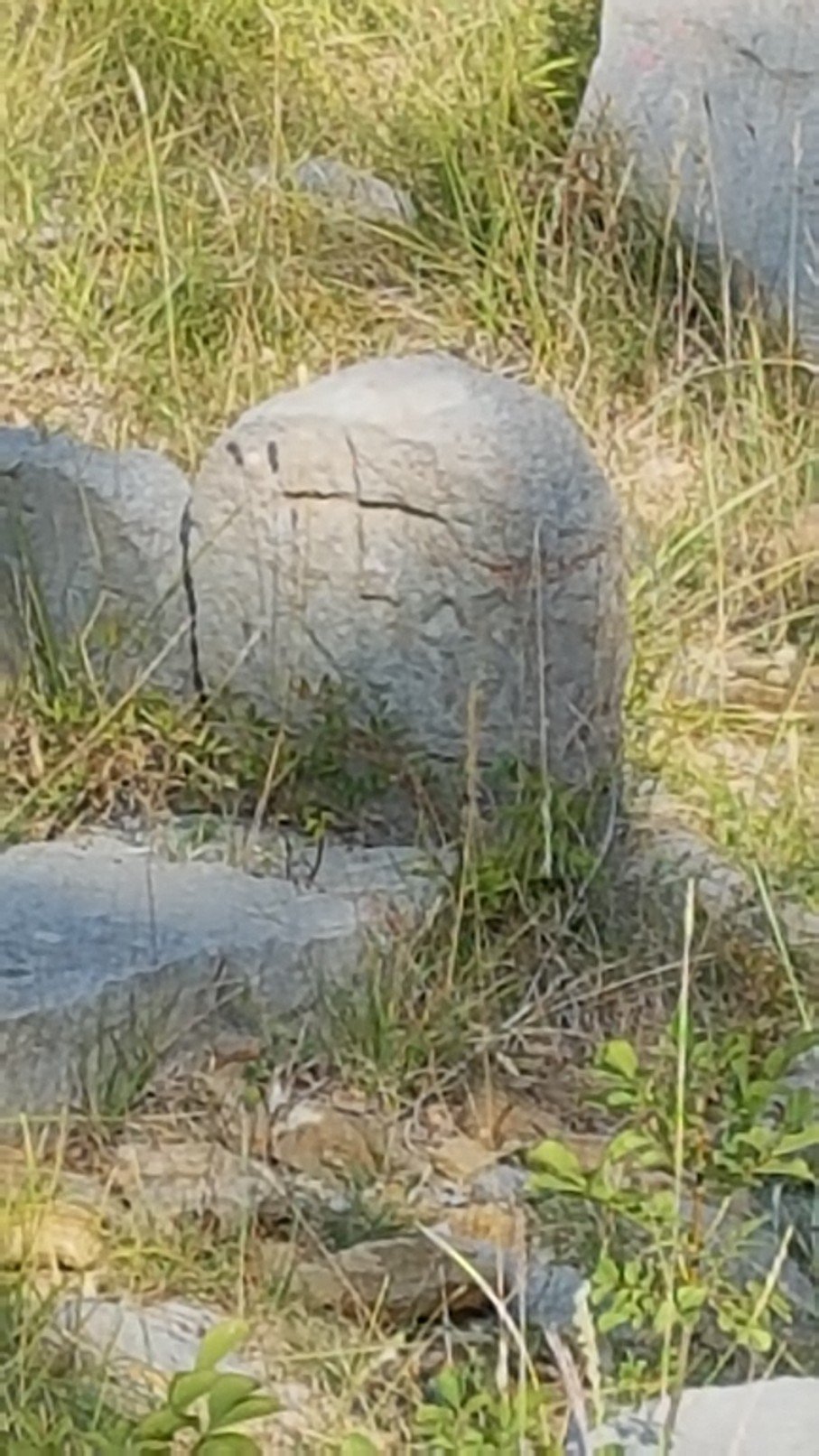 Up we toiled, rewarded with wonderful views, 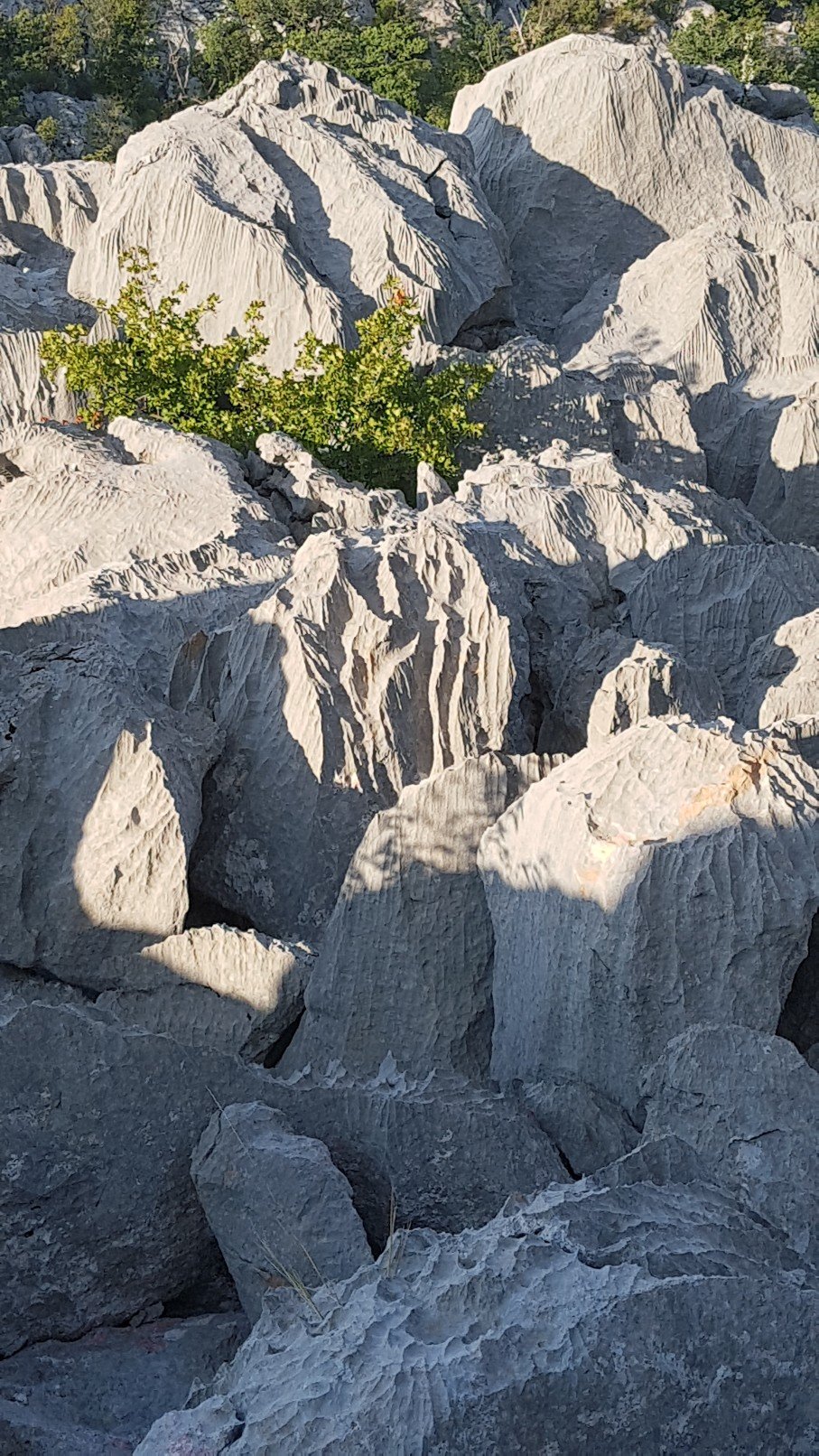 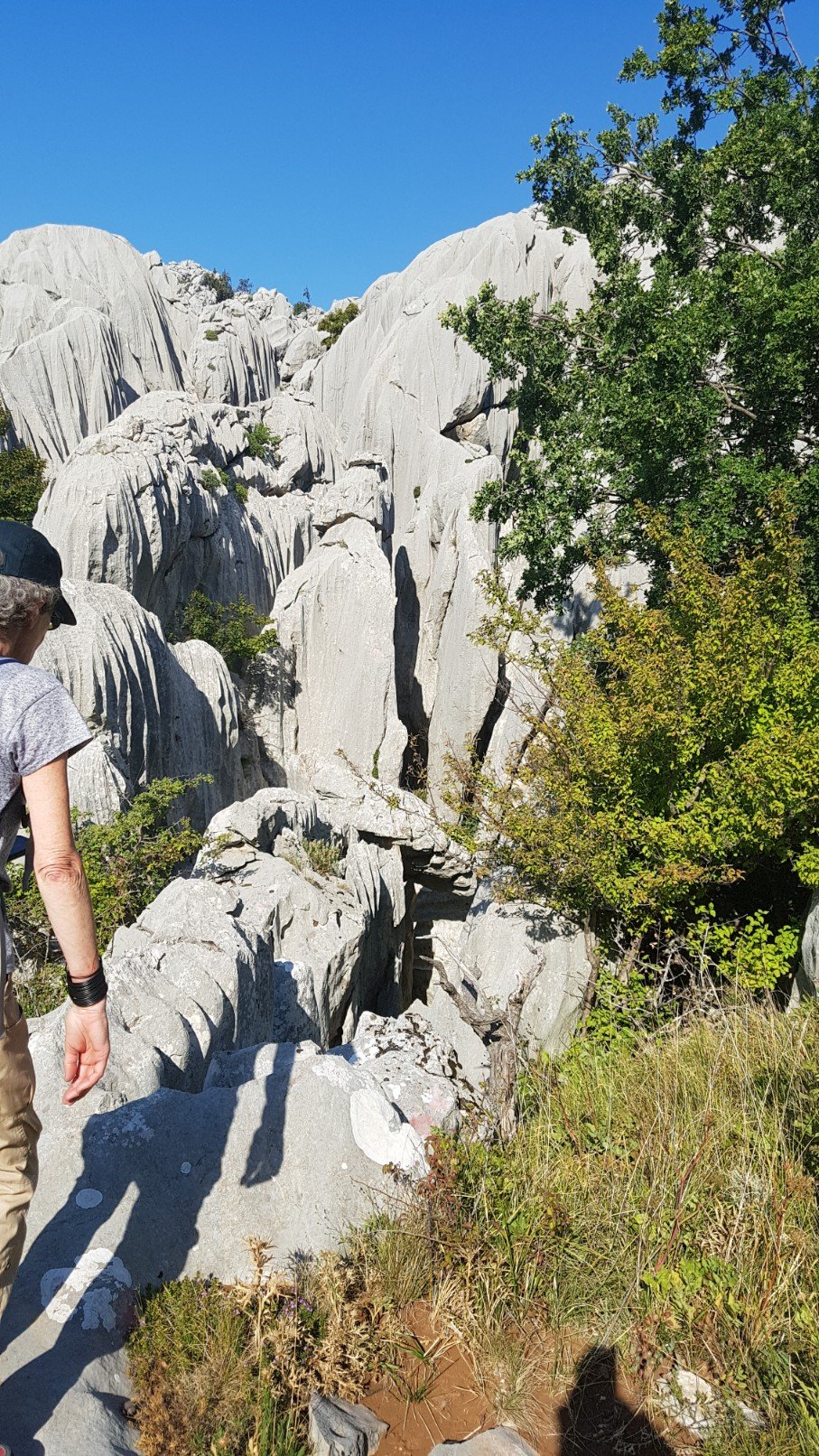 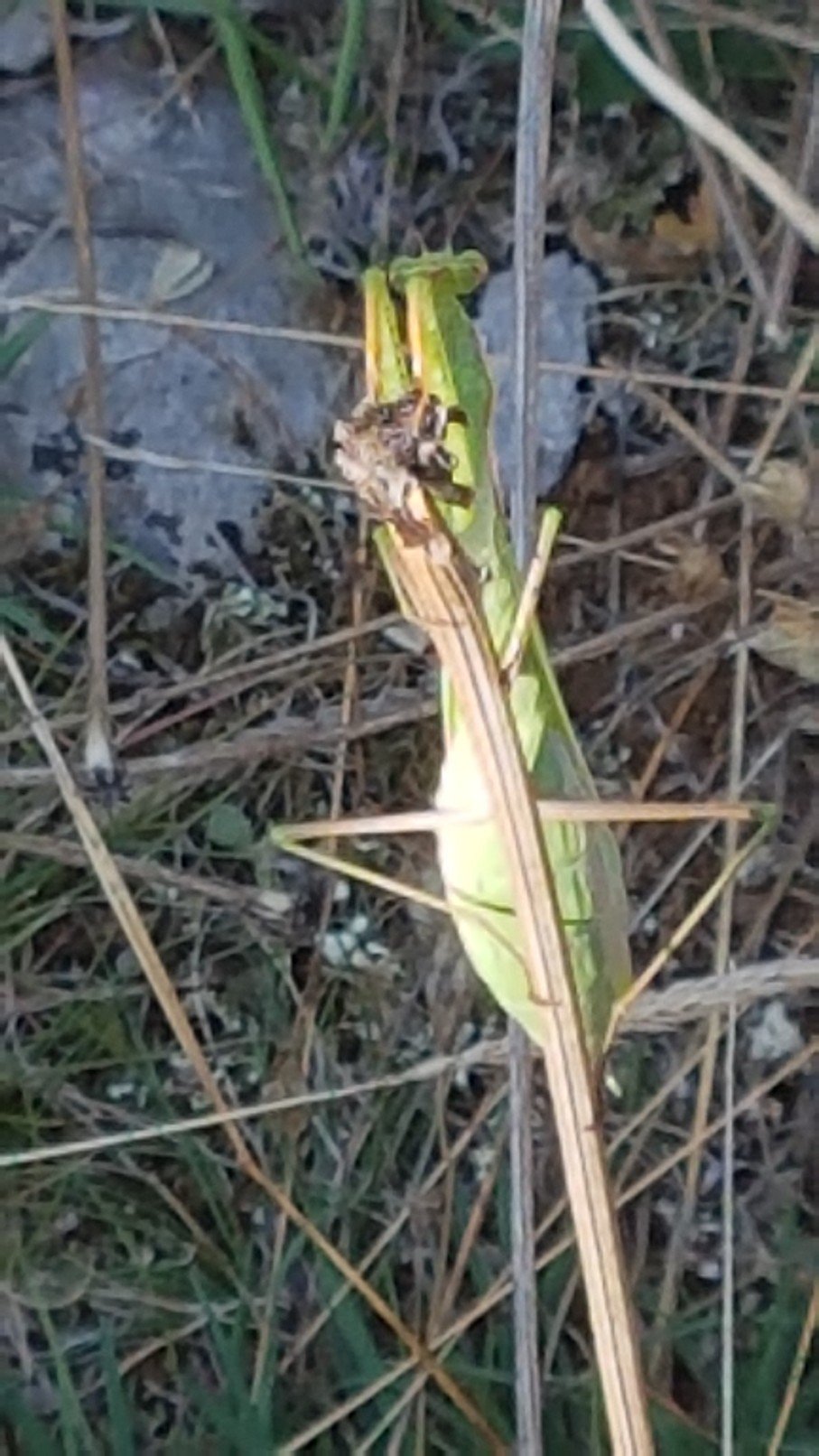 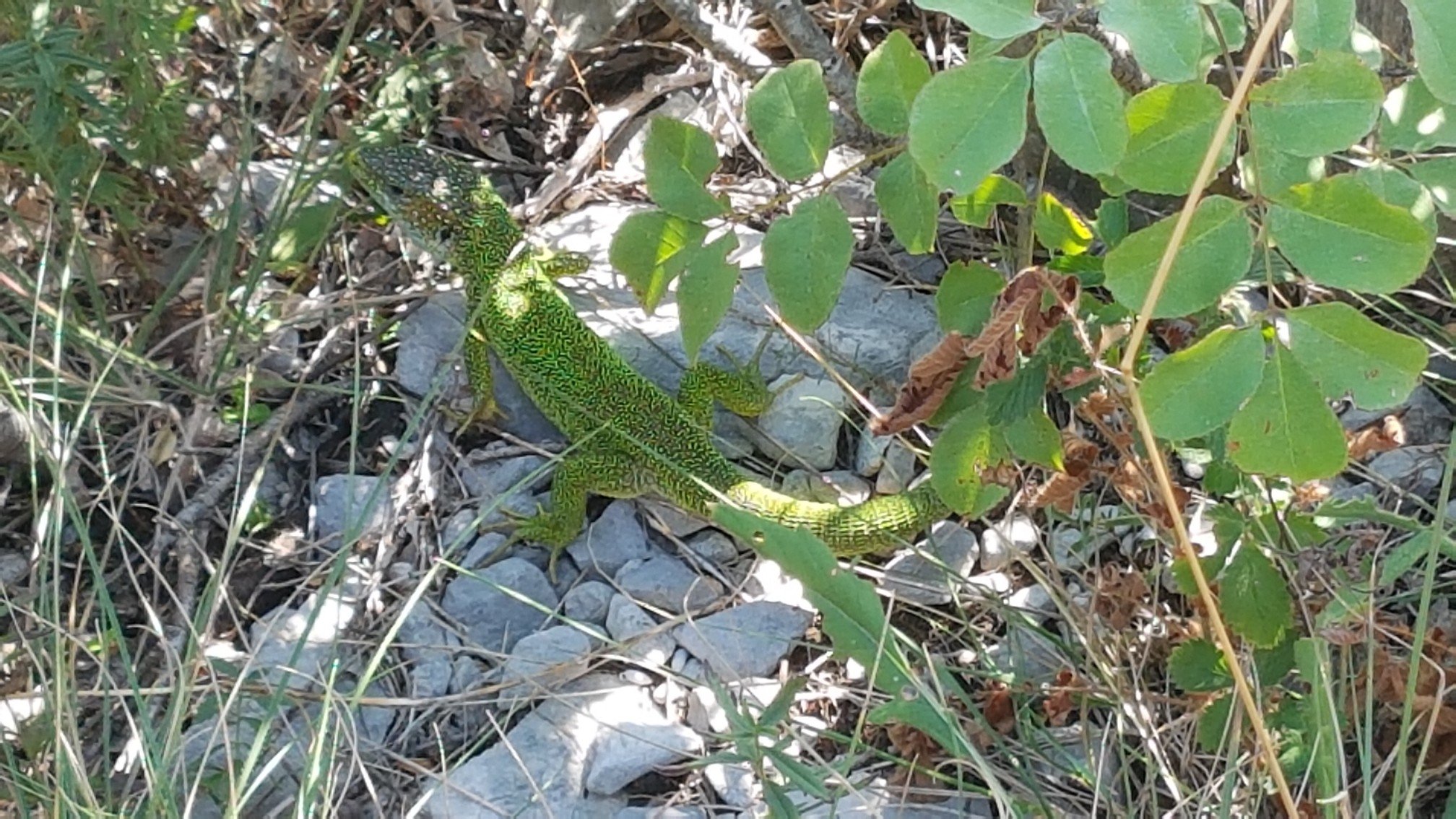 Until after about 3 hours we reached the first flat pastures 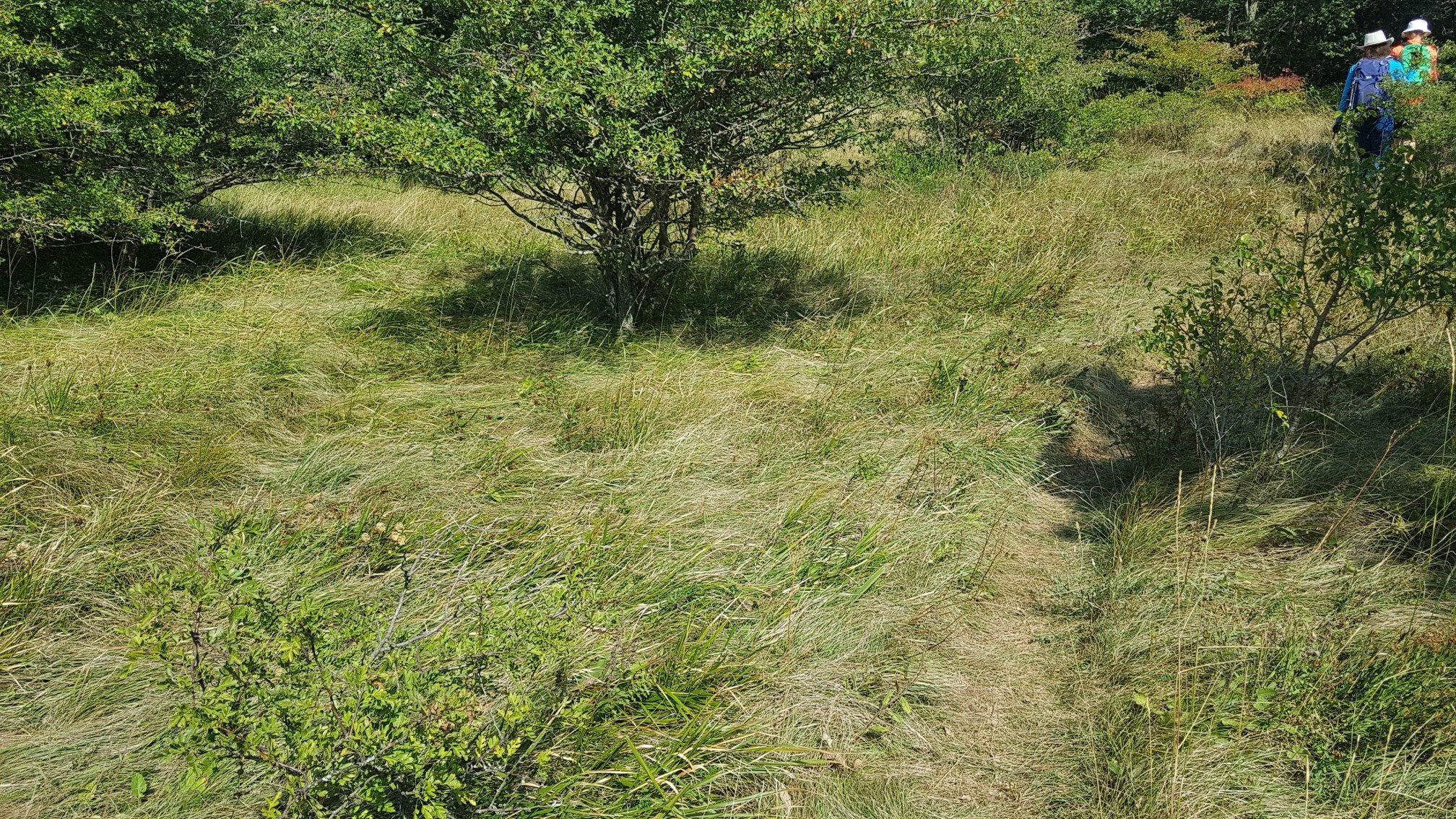 and a shaded spot for a well earned lunch

Just another 15 minutes led us to the highest point of our hike at 840m, known as the Doorstep, with amazing views and rock formations 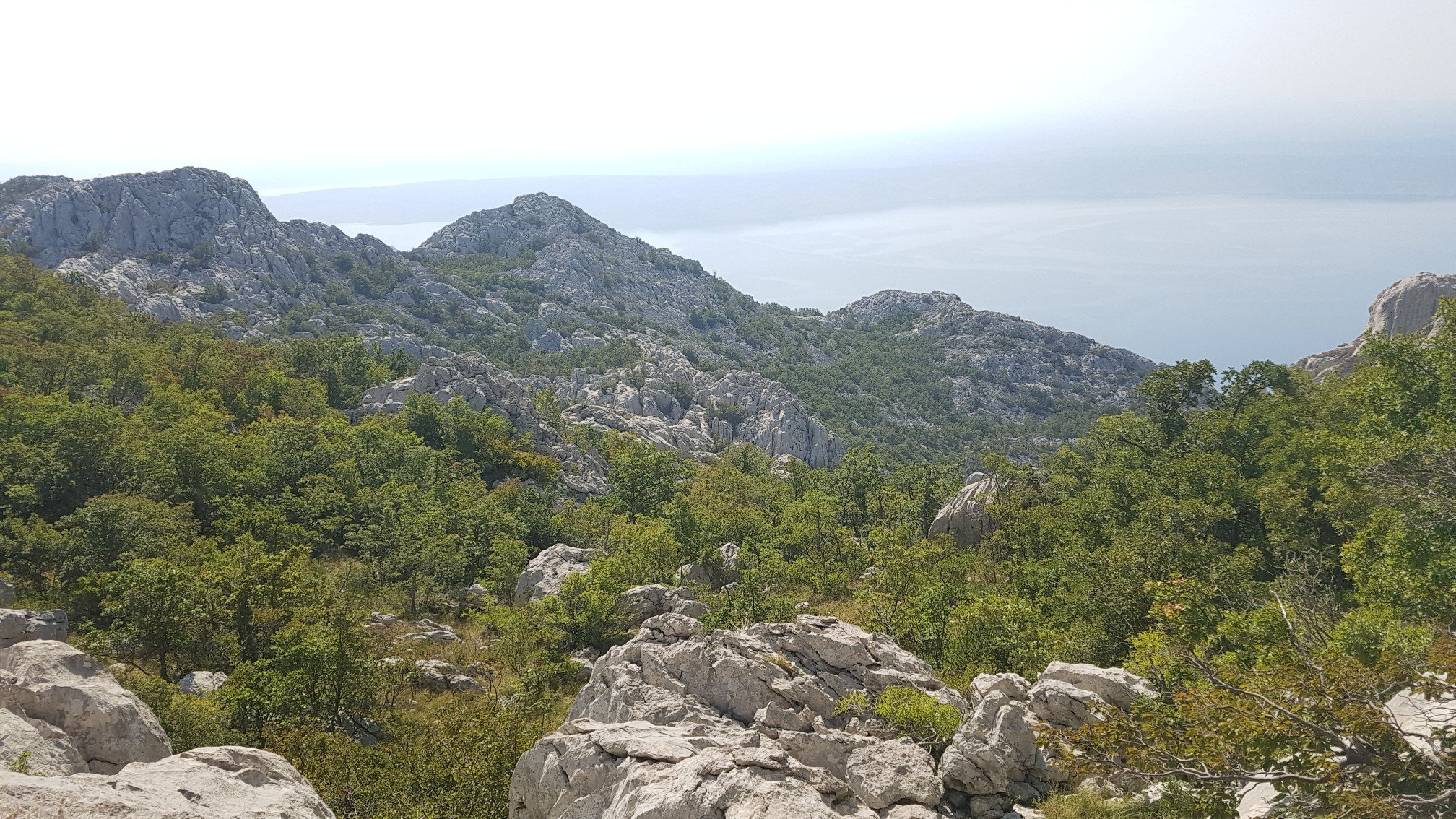 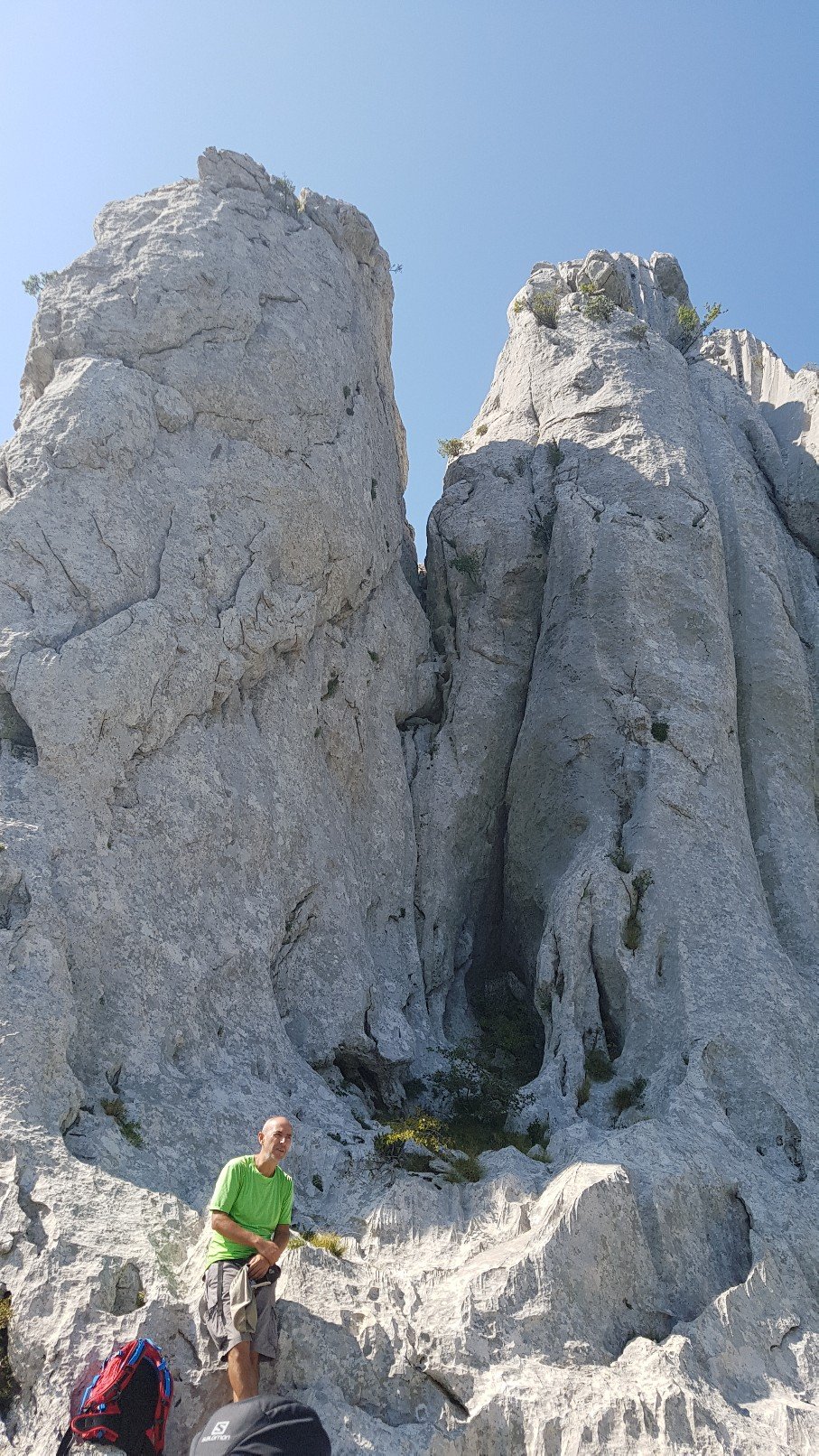 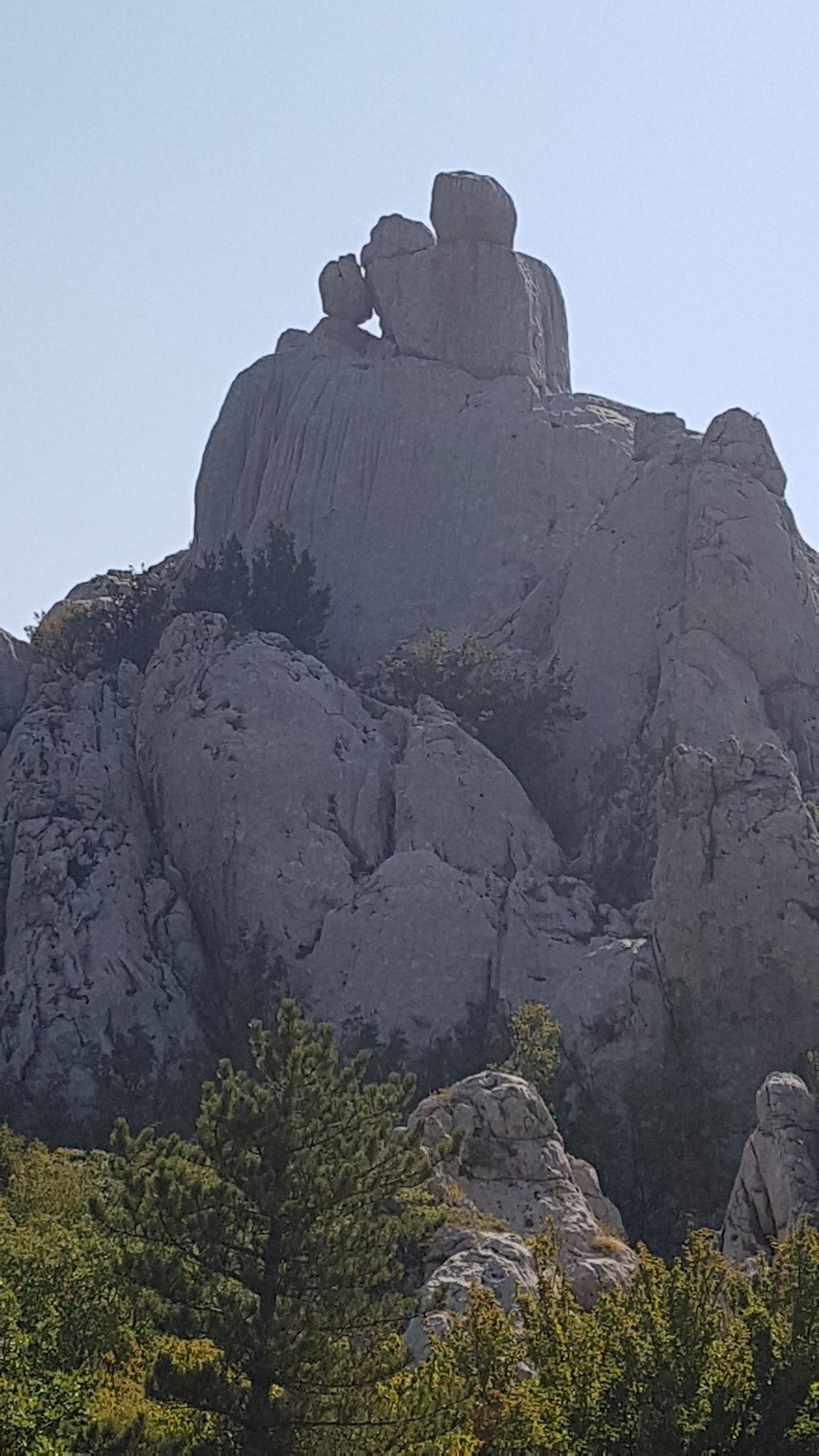 And then it was (mostly) downhill to the pickup point where our driver was waiting.

Drinking beer and bringing the blog up to date as far as September 20.

Our evening was spent with a final group meal in the hotel restaurant, doing the usual end-of-holiday stuff such as exchanging e-mail addresses before retiring for the night and some well-earned sleep before the excitement to come – getting back to Dubrovnik. Read all about that varied day in the next exciting instalment!

The next major segment of our wanderings around the left-hand side of South America will be a trip to Ecuador and (of course) the Galapagos Islands, which will challenge the abilities of my brain to accept and retain an even greater density of information than was on offer in two days on Easter Island. A return to Santiago with a day of conventional tourism (wandering round taking photos of stuff) seemed a fairly restful way of bridging between the two. First of all, we had to get off Easter Island. Malena got us to the airport nearly three hours before the departure, which on the surface of it seems a bit excessive, given that the airport, small as it is, only has to deal with a maximum of two flights a day. As it turned out, it was no bad thing, as it gave us the chance to claim a reasonable place in, you guessed it, a queue.

This wasn’t the check-in queue, though; it was the queue to get into the check-in queue as your bags went through the X-ray scanner. Then we could join the check-in queue. Then we could go and sit outside whilst waiting for the chance to board. Serendipity gave us the chance to chat to a(nother) nice Australian couple with whom we’d actually exchanged a few words en route to Easter Island. They were on the last segment of a two-month trip and really looking forward to getting home; it made me wonder what my threshold will be. But we got some useful tips about Galapagos and Machu Picchu, because of course they’d already been there and done that.

The flight back to Santiago gave Jane the opportunity to watch “Thor – Ragnarok” for the third time on this holiday alone, which shows true dedication to watching whatever it is that Chris Hemsworth has to offer. Nope, still don’t get it. I watched “Kingsman and the Golden Circle”, because I like classy entertainment, me.

Anyhoo…the break in Santiago was scheduled to include a tour of Valparaiso (a major port) and Viña del Mar (its neighbouring holiday resort), which meant we had another chance to meet our charming guide with the unusual portfolio career, Ronald. (Apparently, we were his last tour of the season, and he’s going to spend the winter concentrating on finishing and rehearsing a musical he’s writing).

Valparaiso is some 65 miles from Santiago, and lies on the other side of the coastal mountains. So the journey there takes you westwards through a 4km tunnel into the first of a couple of fertile valleys, and then another into the second. The first valley is where a large amount of fruit and vegetables are grown; the second is lined with vineyards, growing mainly chardonnay and sauvignon blanc grapes. As we went along, Ronald explained that Valparaiso was Chile’s capital city in the 17th, 18th and 19th centuries, capitalising on its significantly important location as a Pacific coast port. However, starting in the 19th century,the important and influential families left the city and the Panama canal damaged its standing as a major international transport route. Its standing has been damaged even further by a recent development which saw another (neighbouring?) Chilean port, San Antonio, win the cruise liner business after Valparaiso’s port workers staged a strike. It has strong French, German and English communities (the local football team is called Valparaiso Wanderers, and Viña del Mar’s is called Everton) and this is reflected in the architecture and the naming of places.

After something over an hour we got to Valparaiso, which was completely different from the completely erroneous picture I had allowed to build in my mind of a relatively dull industrial port. For a start, it is enormously hilly, 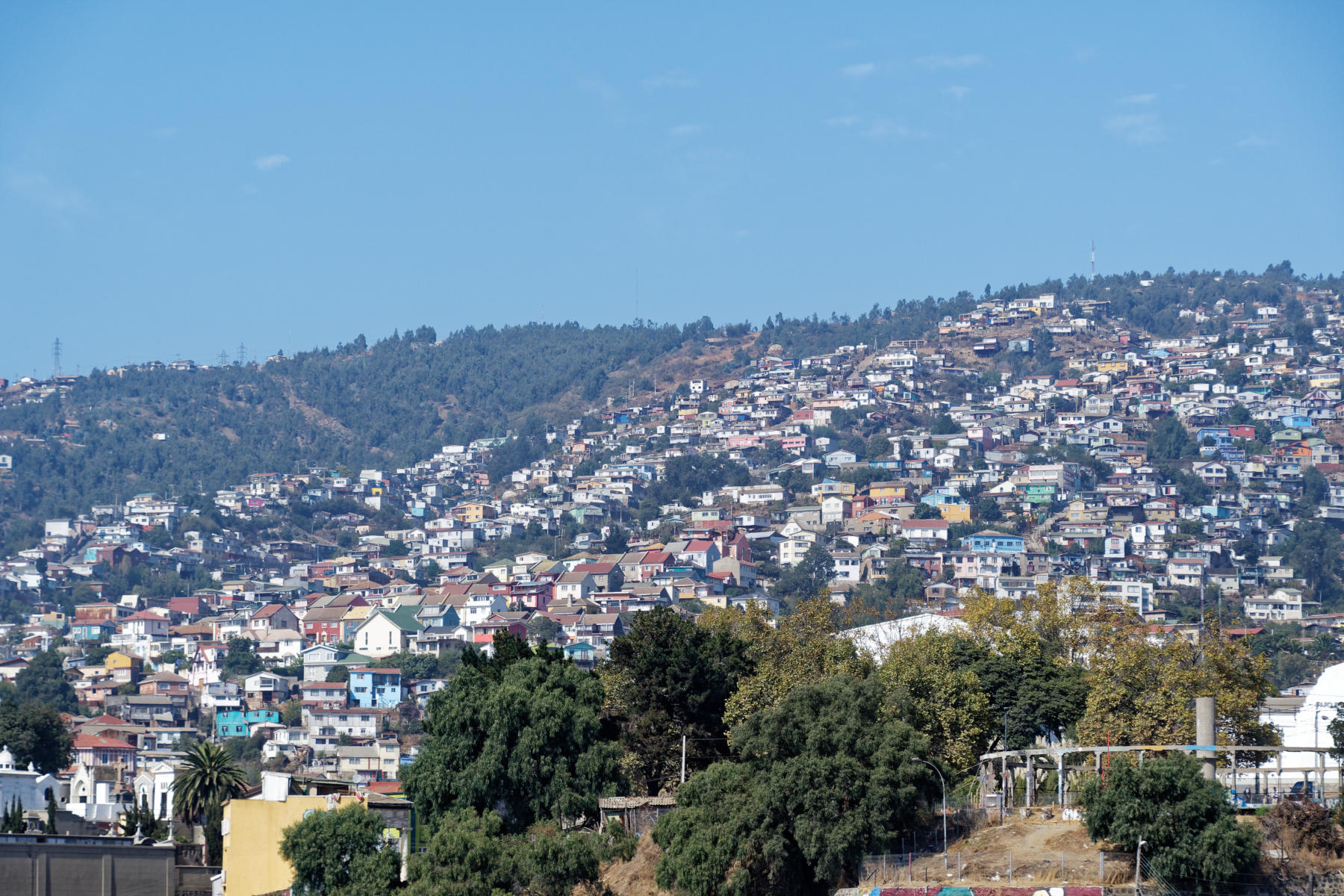 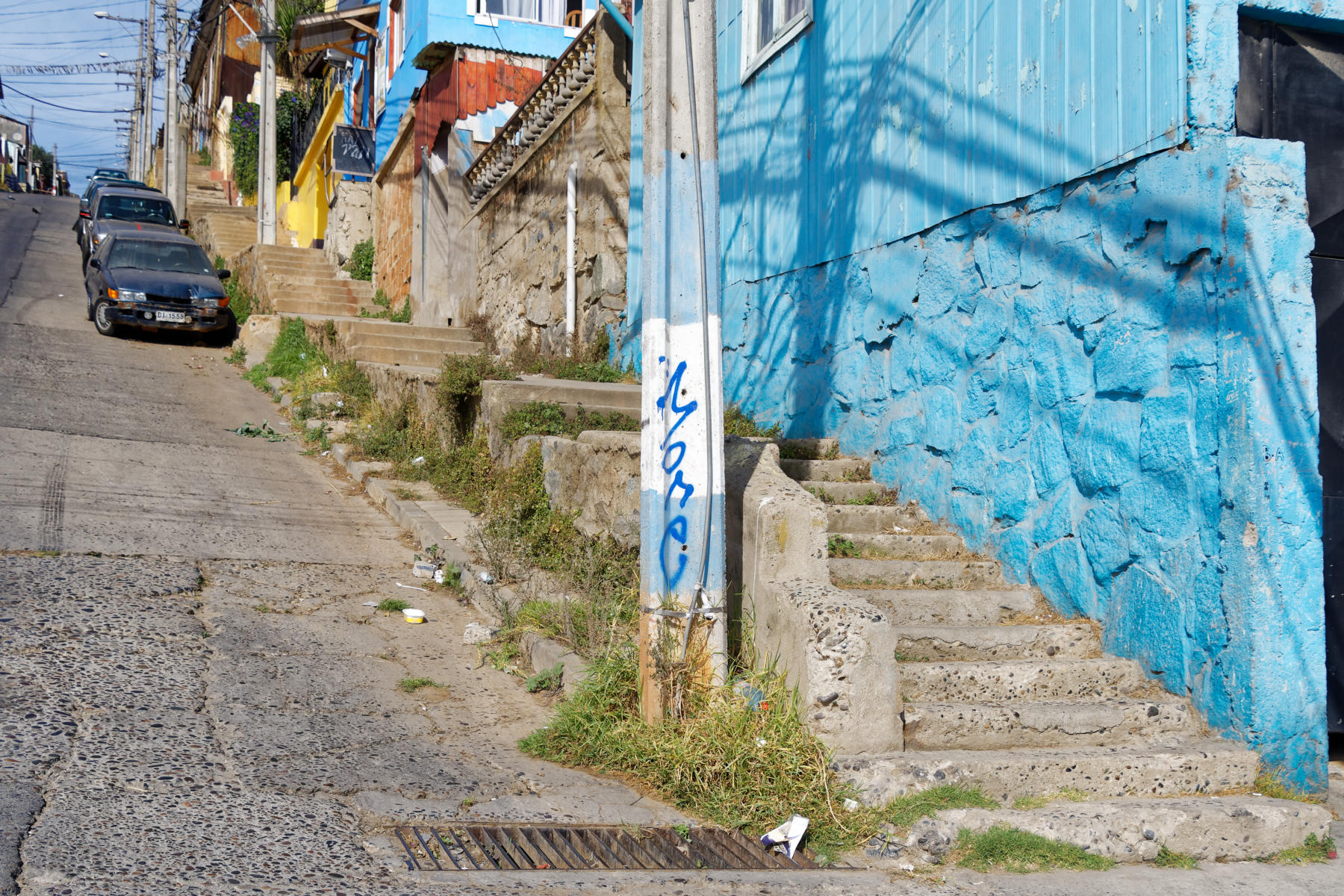 it is ramshackle and graffiti-covered; 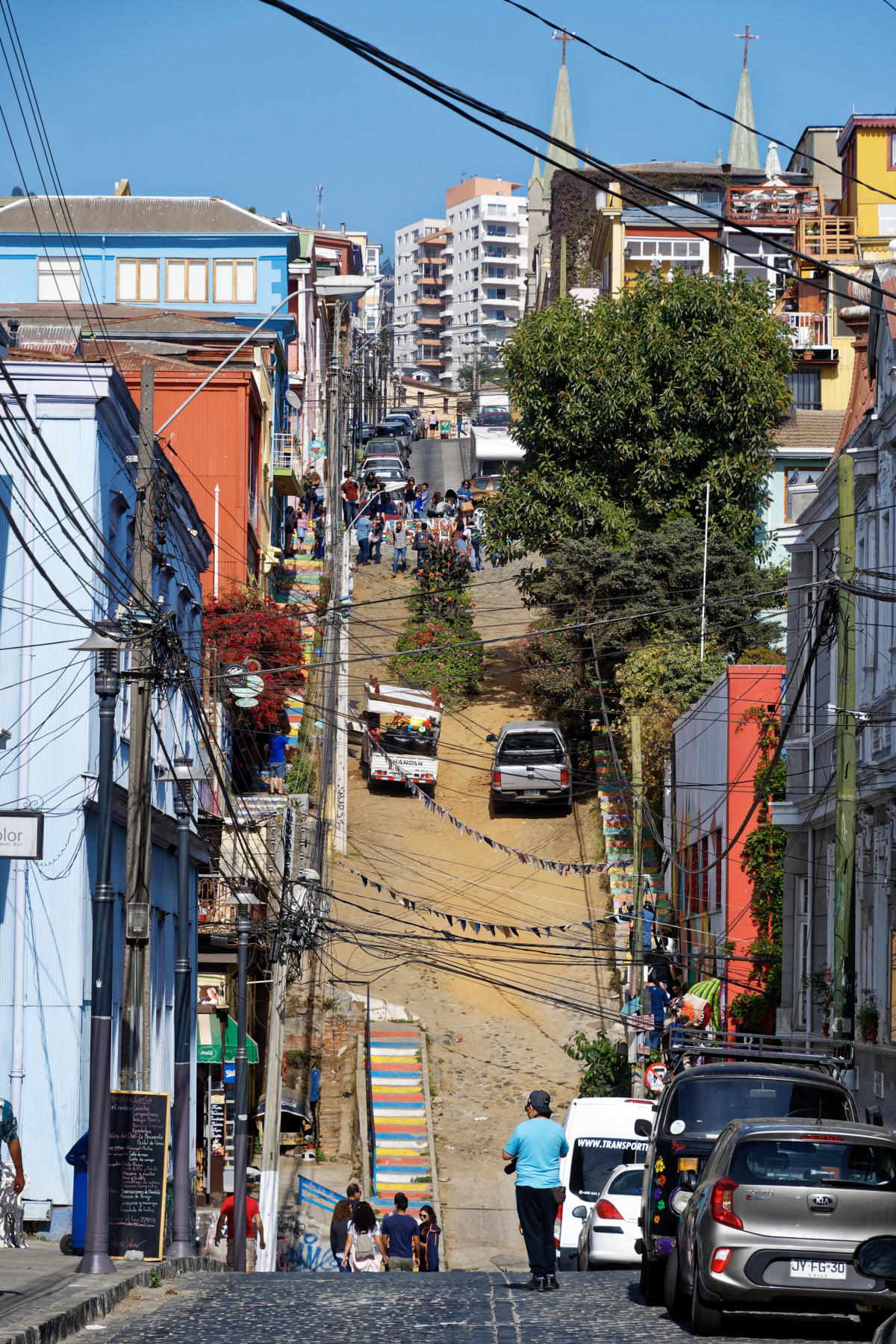 the wiring has a distinctly South American character; 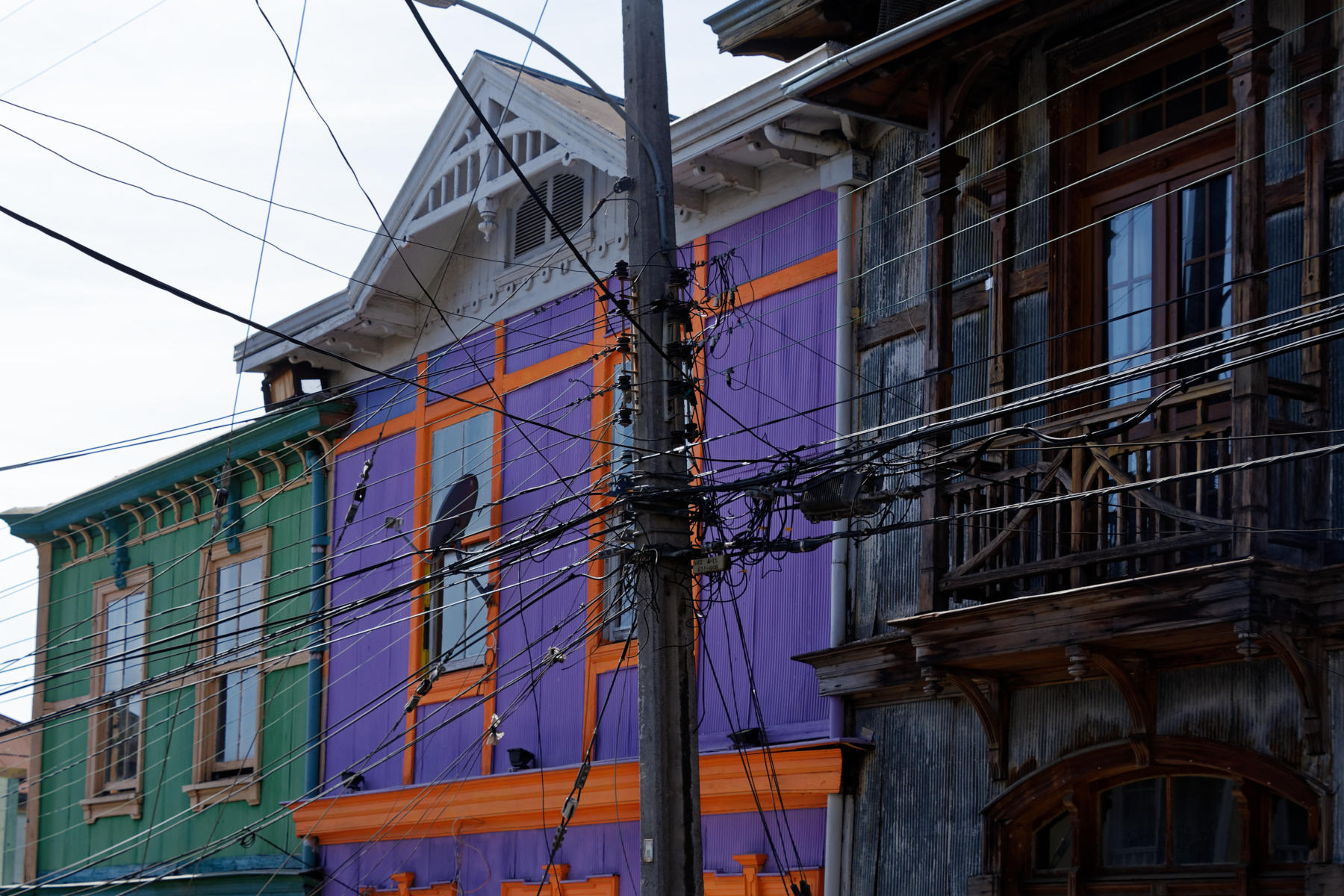 and parts of it are reportedly very dangerous.

On the other hand, it has considerable charm: lots of the buildings are very colourful; 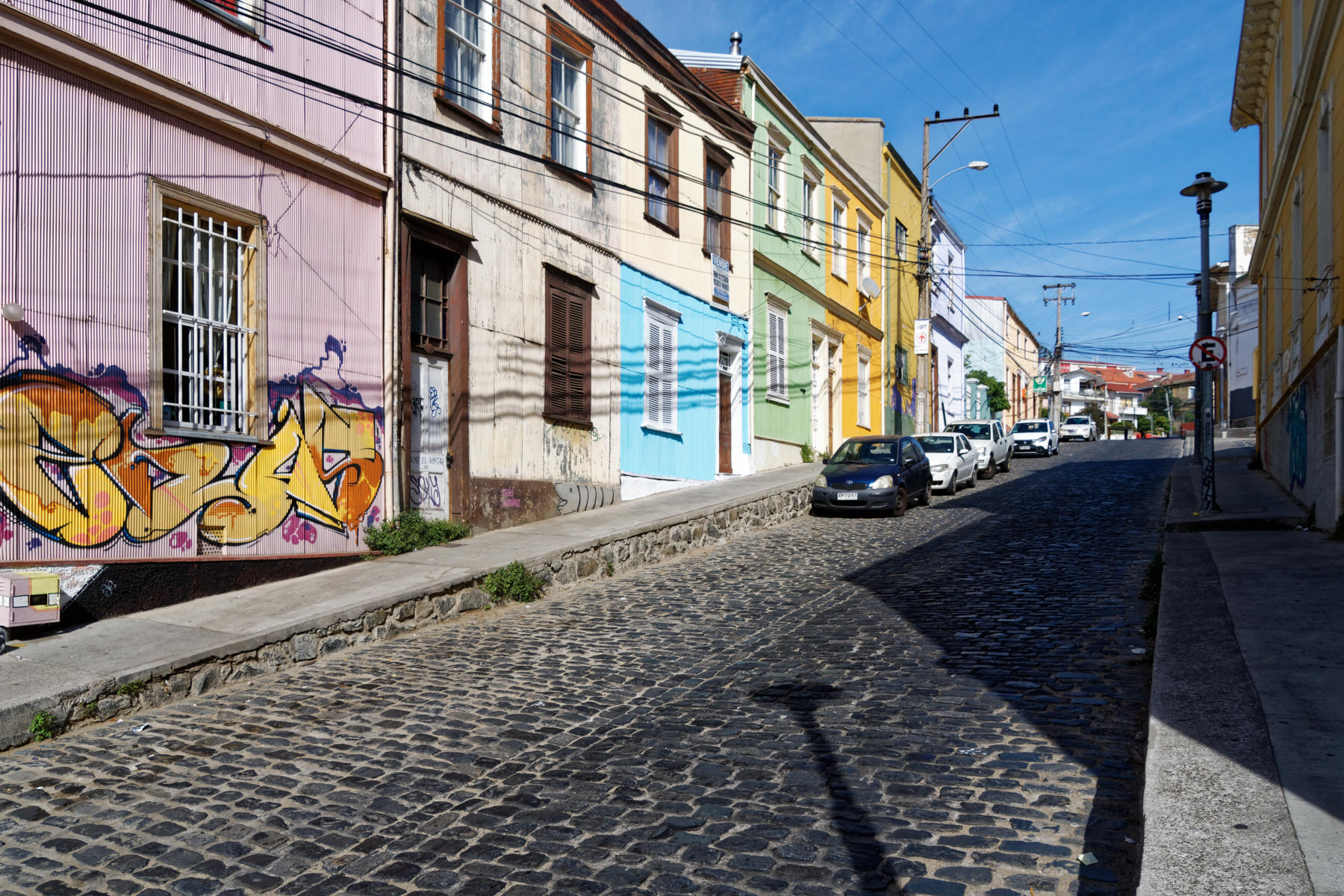 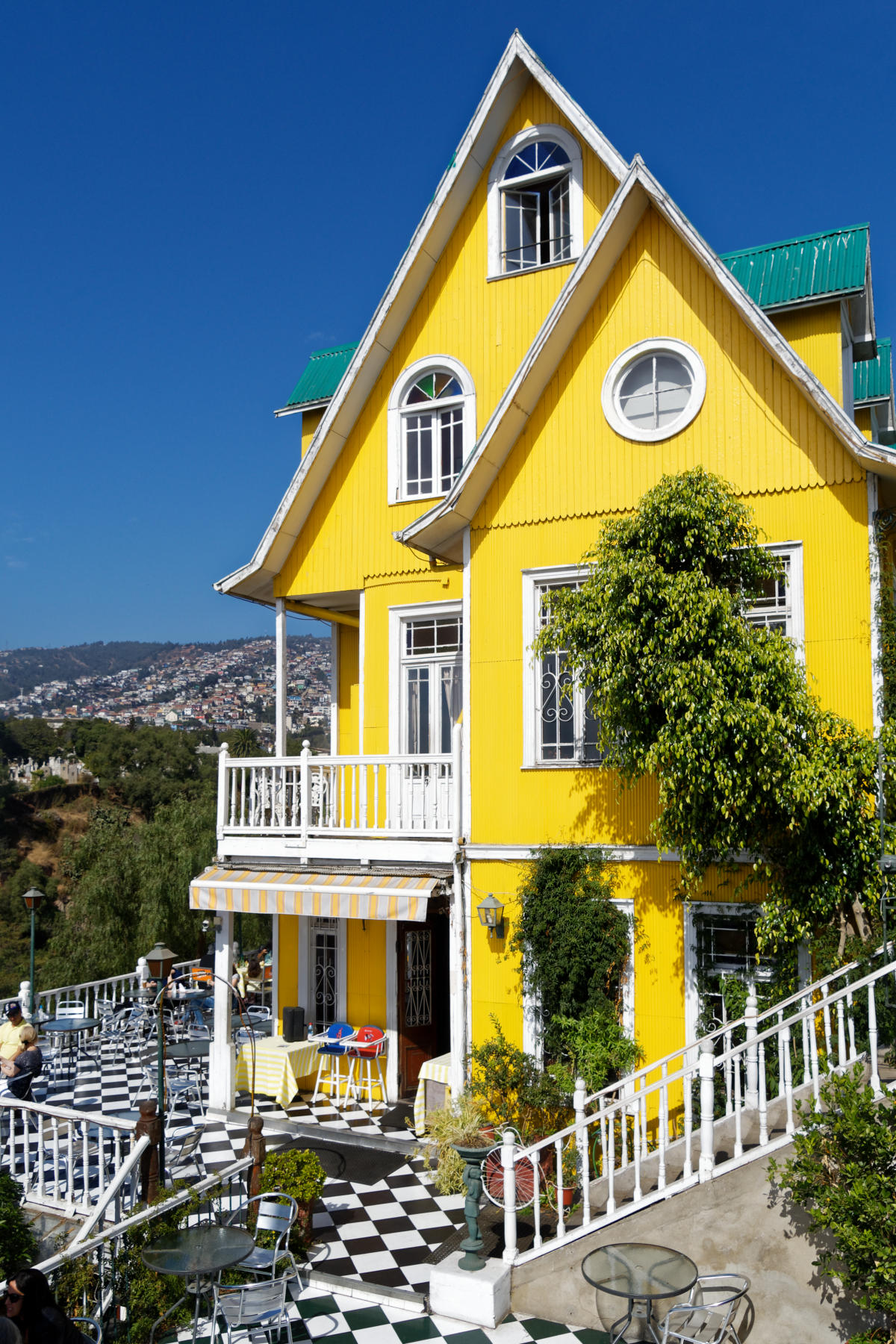 (above – the Hotel Brighton) many of them are unusual, like the Palacio Baburizza, built by a Croat and gifted to the city in his will; 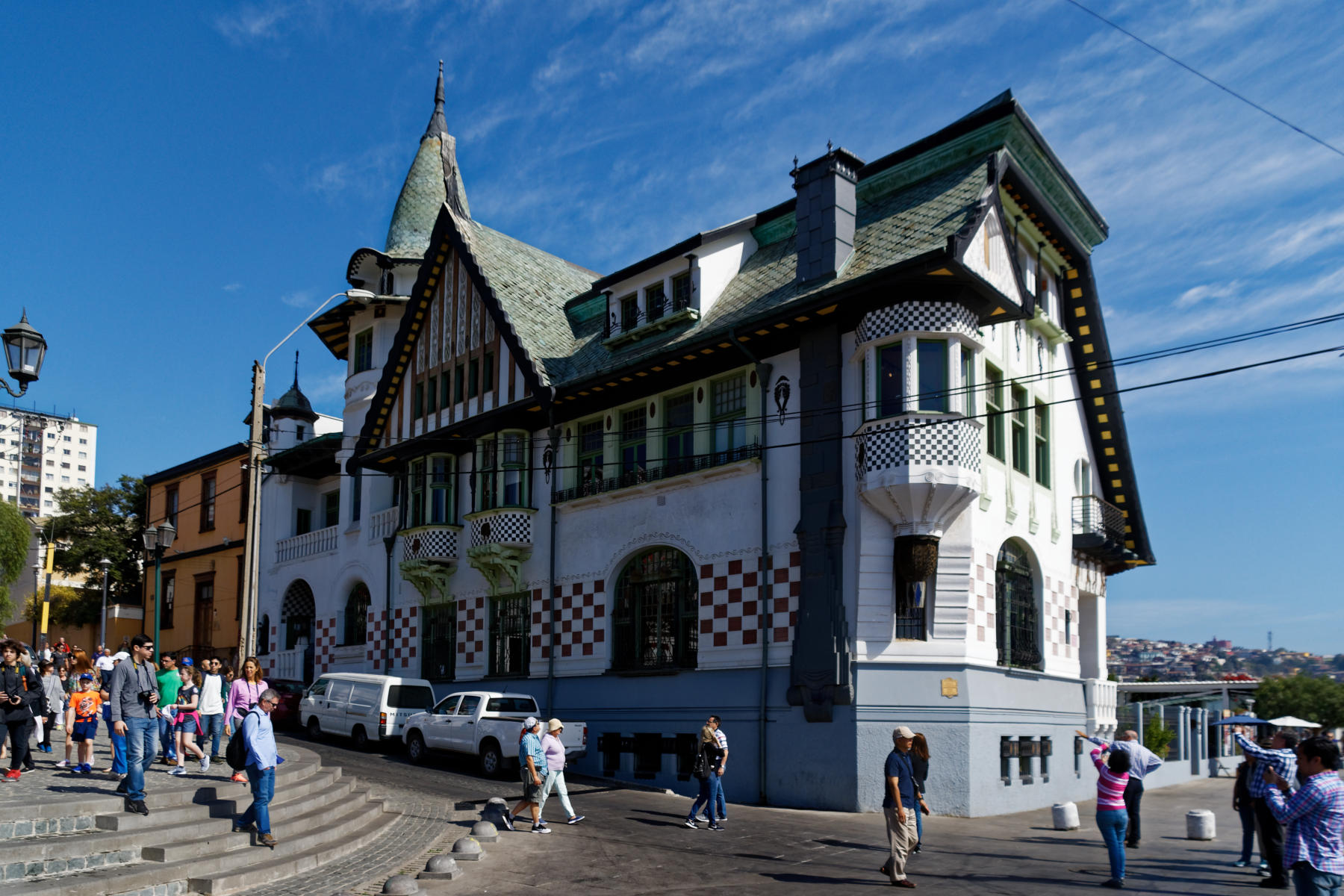 street art of all sorts abounds; 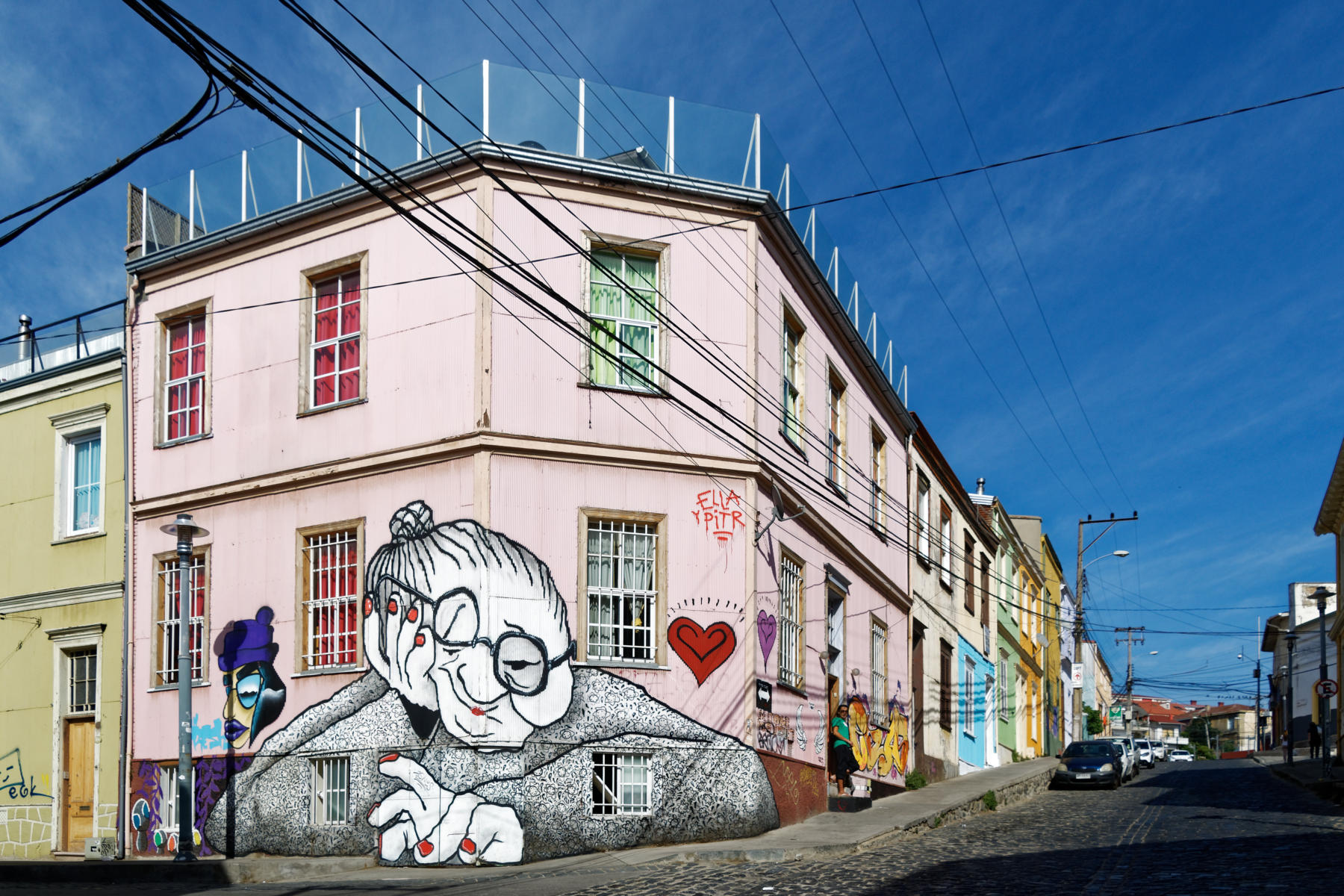 with innovative use of resources such as drinks bottles 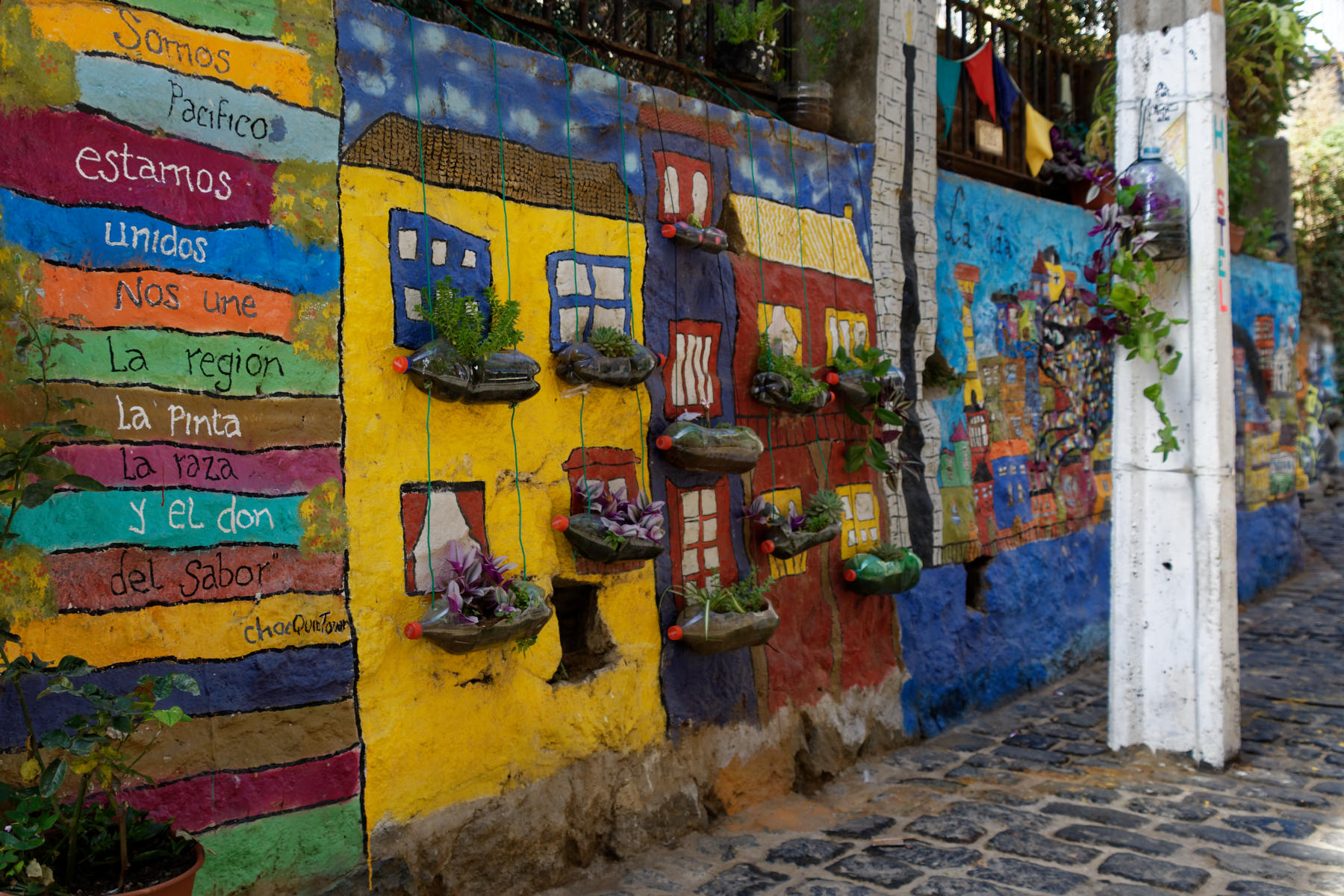 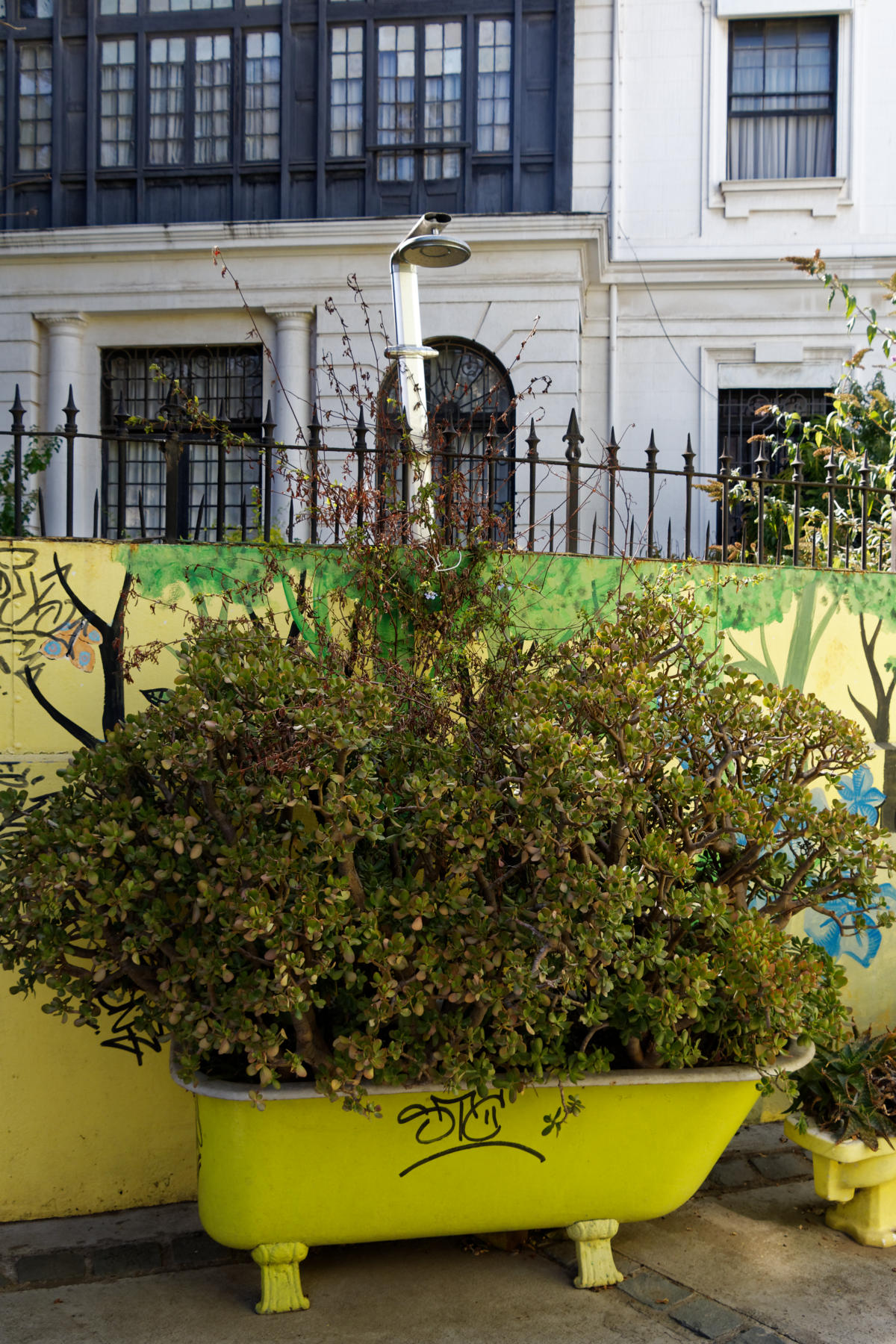 and the various hillside neighbourhoods are served by funicular railways (some working, some in disrepair).

Yes, it is an industrial port, but on a sunny Good Friday, with the holiday crowds out 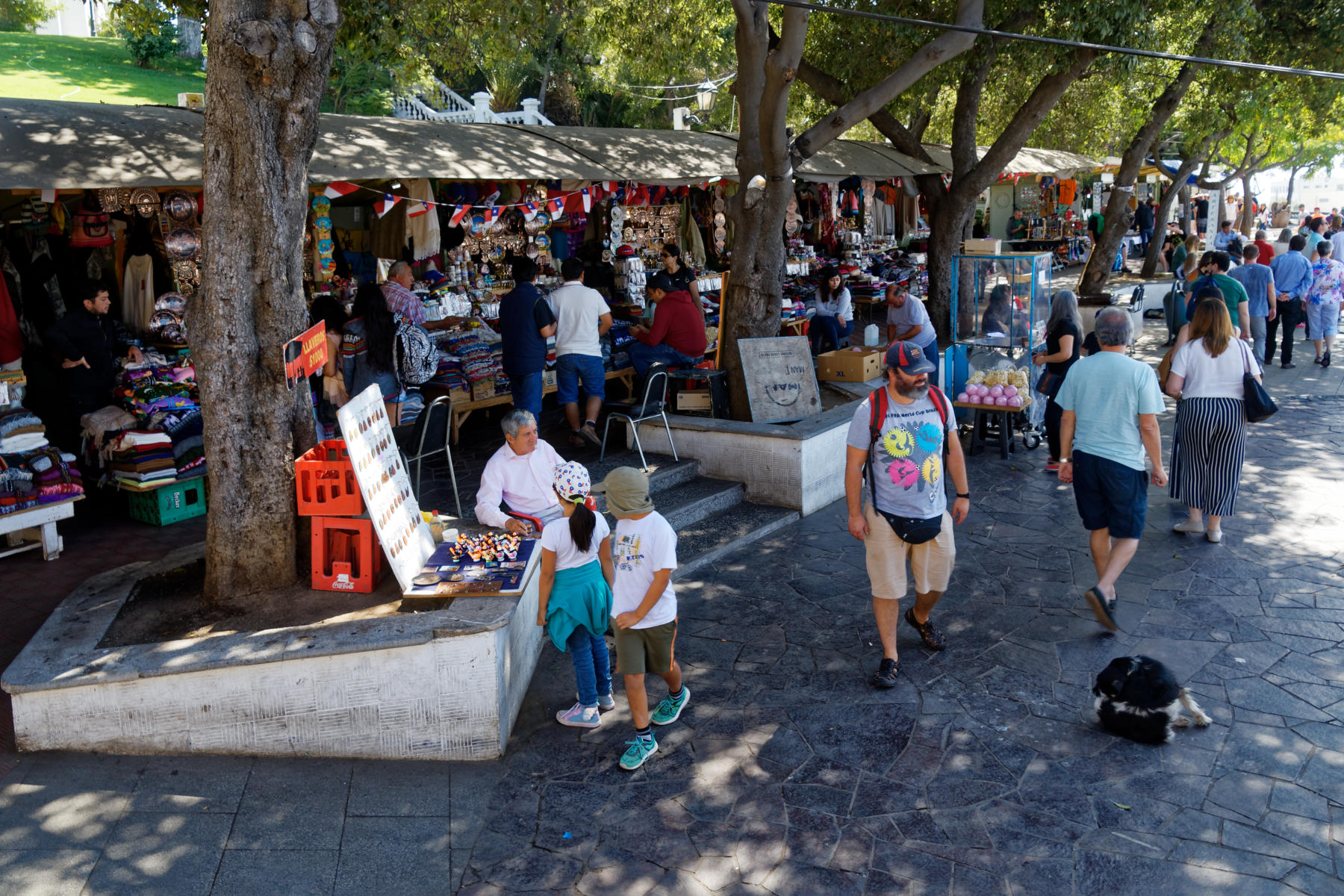 and the entertainers plying their trade

Valparaiso shows that it is unique, vibrant and appealing. (The puppet master shown above had his Pavarotti wander over to the money tin after the last aria, peer in and shake his head in disappointment; a lovely touch.)

Ronald made the visit even more individual by performing some of his pieces in a local café called Columbina for us, on an appallingly out-of-tune piano, which is why I’m not providing the video.

So by the time we’d seen that and got to Viña del Mar, there was really only time for a nice lunch at a decent, busy, buzzy restaurant called Los Pomairinos, where we were served by Ian McShane, or possibly Robbie Coltrane 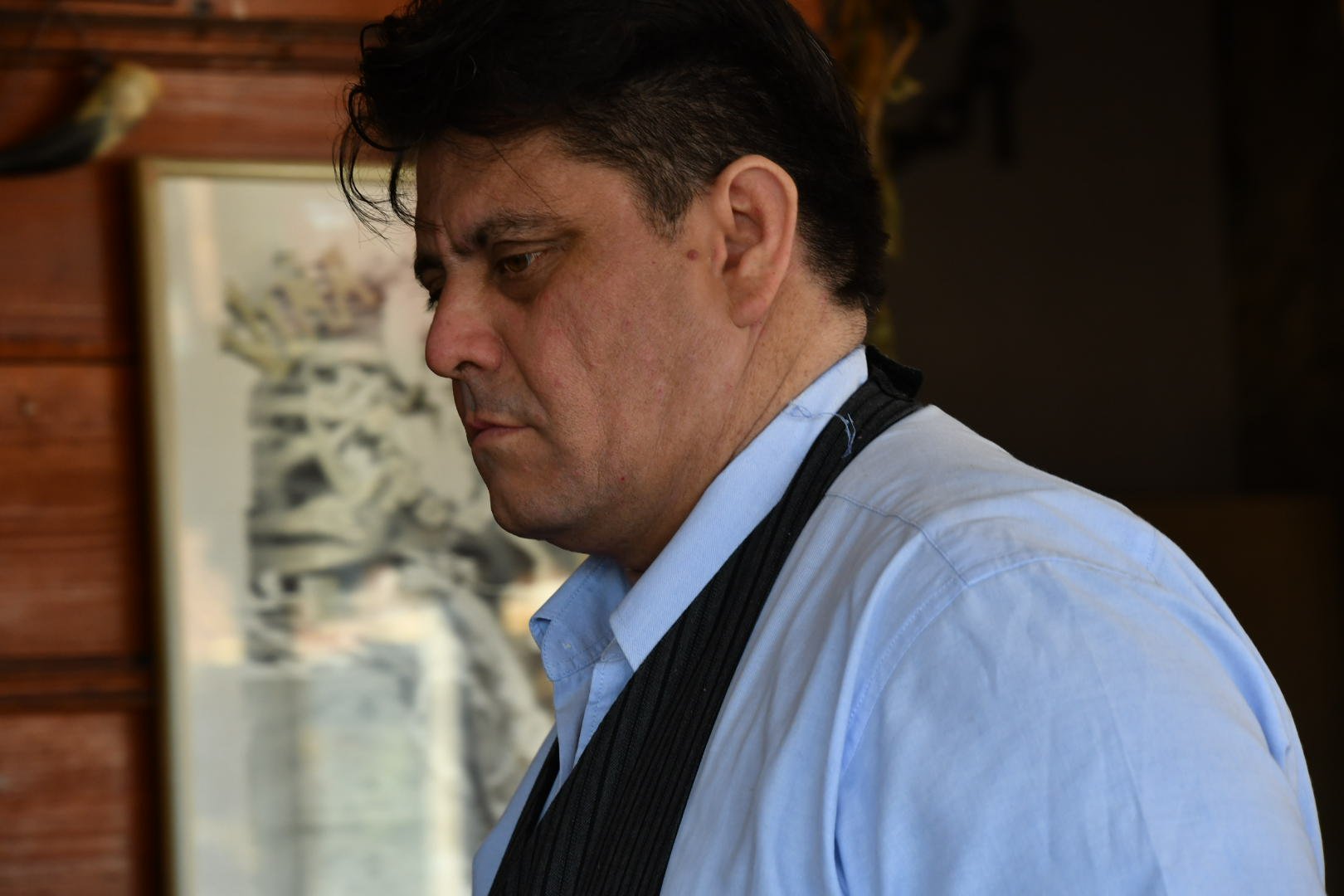 (actually much more genial than he looks in this photo), and then it was time to go back to base, as we decided that there wasn’t much to Viña del Mar beyond beaches, proms, apartment blocks, sunshine and general seasidery. We had an engaging detour to say hello to Ronald’s sister, which you don’t get on your average private guided tour, and then we were back at our hotel, to prepare for a 5am start to our journey to Ecuador. We will report in on that in due course, but will likely be off-grid for a week whilst filling memory cards with photos and videos of all the Galapagos Islands have to offer.