It’s a long journey to Easter Island from Patagonia – a couple of hours on a plane from Puerto Montt to Santiago, then five and a half from Santiago to Easter Island, via a longish stopover; thank heavens for Starbucks, which provided Earl Grey Tea, WiFi and plenty of places to charge the various mobile devices.

The main reason for including this huge diversion in our odyssey was Jane’s desire to see the Moai – the Easter Island statues – which has been with her since she saw a photo approximately like this one as a child. 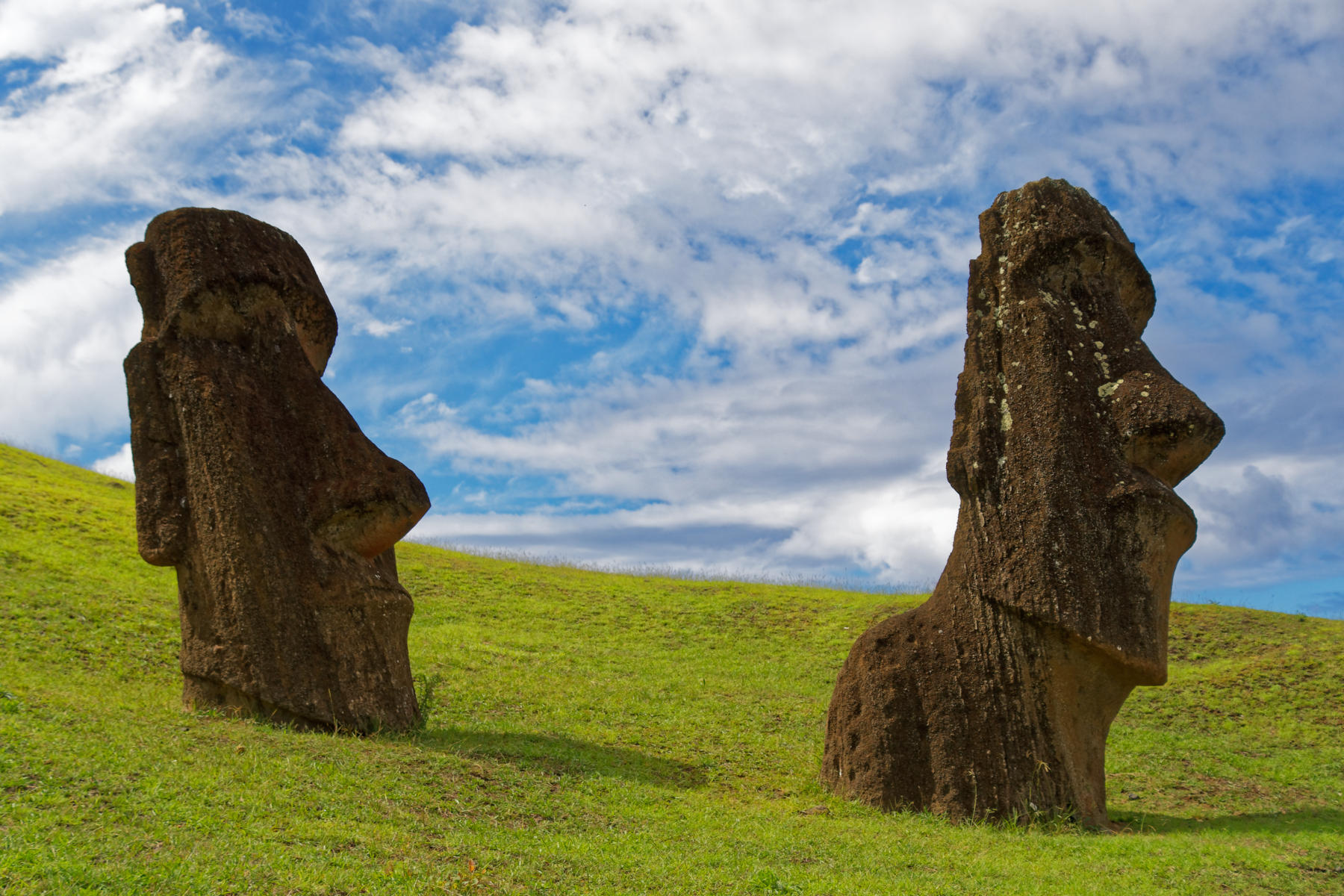 We travelled on a Boeing 787 Dreamliner which was pretty comfortable, but the disembarkation was slightly surreal, as we got off the back of the aeroplane and took a relatively long walk across the tarmac to the terminal. 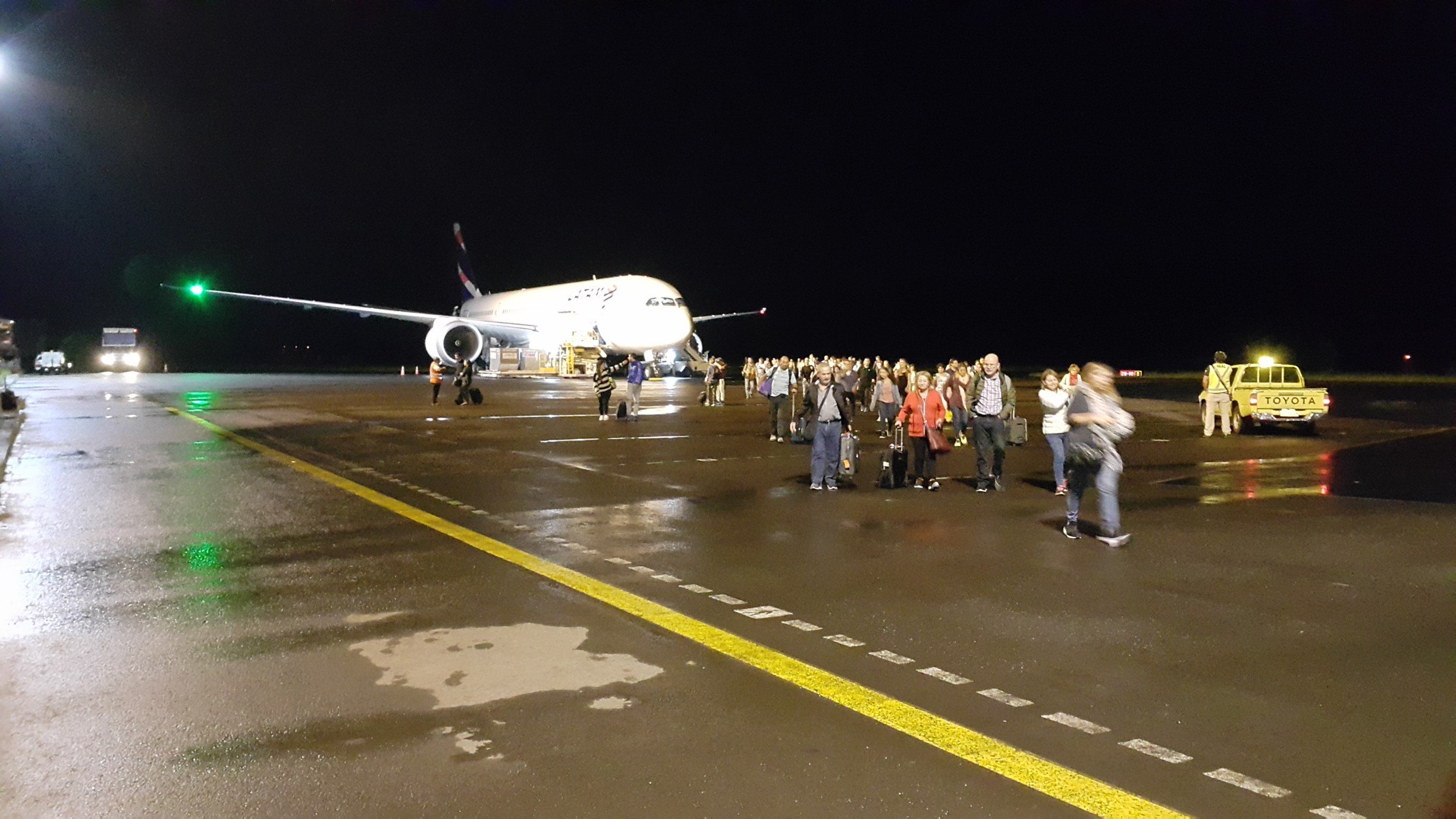 But our baggage arrived safely, and our guide Malena was waiting to take us to our hotel, the Taha Tai, which was very close by.

The next day, Malena treated us to day one of a sightseeing and history tour. A Belgian chap we chatted to during our travels from Bariloche was scornful about Easter Island, saying it was “too commercial”. Mind you, he was scornful about a lot of things. Tourism is of huge importance to Easter Island’s economy and it’s quite a small island, so fitting in all the people and all the things to see whilst preserving the integrity of what’s there to be seen means that you sometimes feel you’re on something of a production line. It’s tourism à la TCP/IP; instead of big coaches descending on places with vast numbers of tourists, you get a large number of smaller vehicles dispensing tourists in packets, which reassemble at place after place. (And, yes, there are many retail opportunities to buy souvenirs and other tat; but I didn’t feel that it detracted from the overall experience.) And, for that reason, it’s important, I believe to be guided around the island. The official tour guides tend to have routes around the various sites and sights which enable them to tell the story of the island so that it unfolds over the course of a stay.

So, Malena started off telling us the history of the island, which is quite bizarre, and many parts of it are shrouded in mystery; the answer to many “why did such-and-such happen” or “what about this-or-that” is “Nobody knows”. I commend the Wikipedia entry to you. The island is famed for its moai, statues of a size up to monumental of male figures. When that famous oxymoron “western civilisation” first found the island (on Easter Sunday, 5th April 1722, hence the island’s name), as far as we know, all these statues were upright, as they were by 1770, when the Spanish arrived. James Cook arrived from England four years later and noted that some statues were toppled. They were all toppled by the time of arrival of French missionaries in the 1860s. So they were gradually, and, it seems, systematically toppled, but no-one really knows why.

Another mystery concerns deforestation. At one stage, during the moai culture, the island was a jungle of palm trees (not coconut palms – if you see one these days, it’s imported). And all of the palm trees were systematically, patch by patch, destroyed. Why? “No-one knows”. One theory asserts that this loss of palm trees, and therefore the means to escape the island in boats, gave rise to the Birdman culture – you’ll have to read about that in a later blog – but all is speculation about why the moai culture disappeared and why the Birdman culture replaced it.

One of the main reasons for the loss of historic knowledge is that the island’s population dropped at one point to 111 individuals, with the rest being wiped out by slave trade, western disease such as smallpox and tuberculosis and other such occidental delights. Many people were removed from island by Peruvian slave traders in the 1860s, despite this being illegal. An attempt was made to repatriate slaves; but no-one knew who came from where, so the island was repopulated rather randomly by people who “looked polynesian”.

A statue represents a village elder or other important person after death. The statue is erected on a stone-built platform, alongside others that may be there, as a symbol of the continuing power of the elder to protect the village, as the moai all face the village. One theory goes that with the arrival of western visitors, disillusion set in and the statues were toppled in anger. One thing is clear – it was human activity and not some natural catastrophe; the reasons for this are the timespan, as the toppling spanned several decades, and the direction of fall, which is always forwards, on to the face.

There are some 887 moai on the island. Most platforms are ruined and feature toppled moai, which are archaeologically interesting, but photogenically rather dull, particularly since the national park rules tend not to let one get in really close to explore interesting angles. 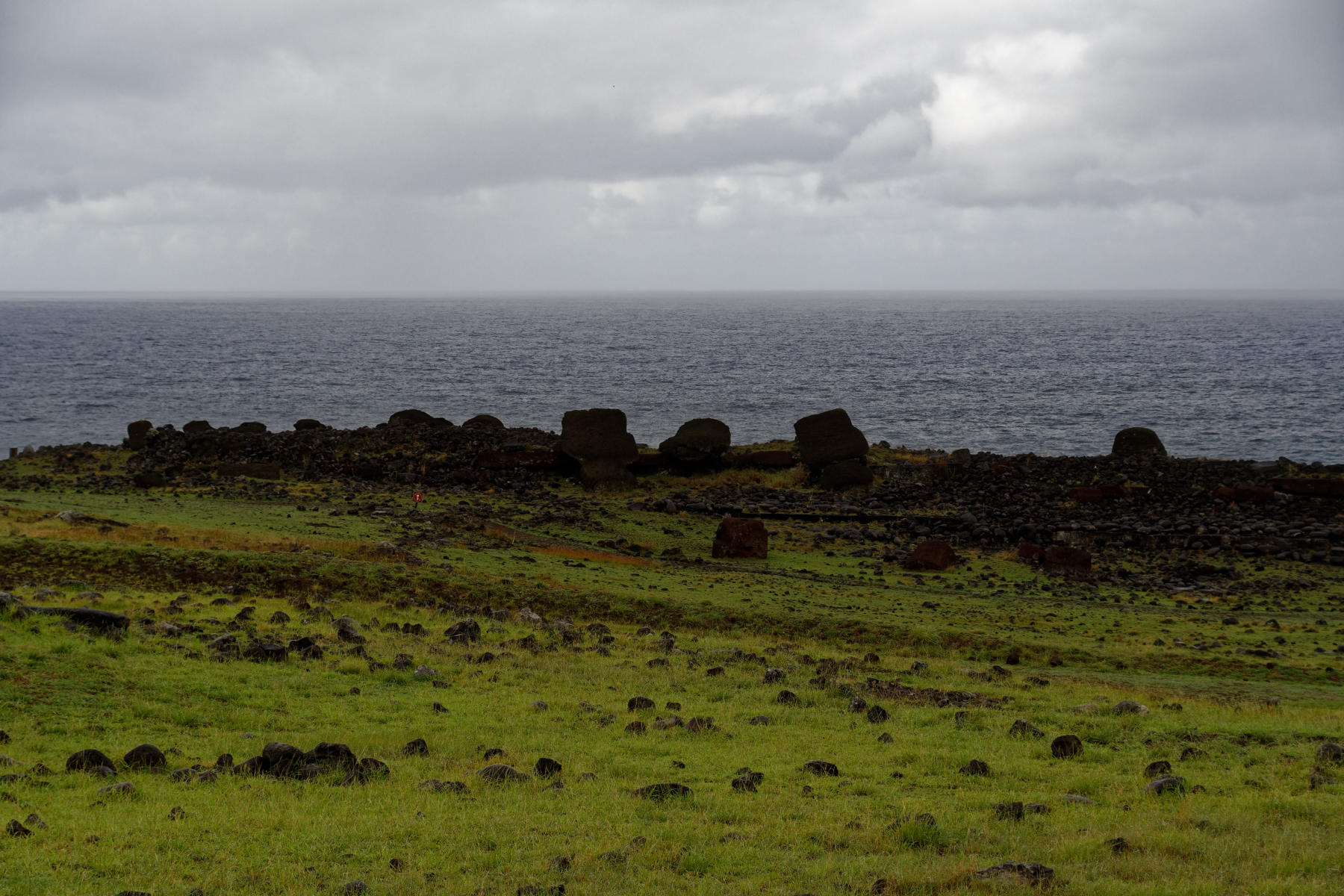 There are, famously, several platforms which have been reconstructed. The one with the largest number of the largest moai is called Tongariki 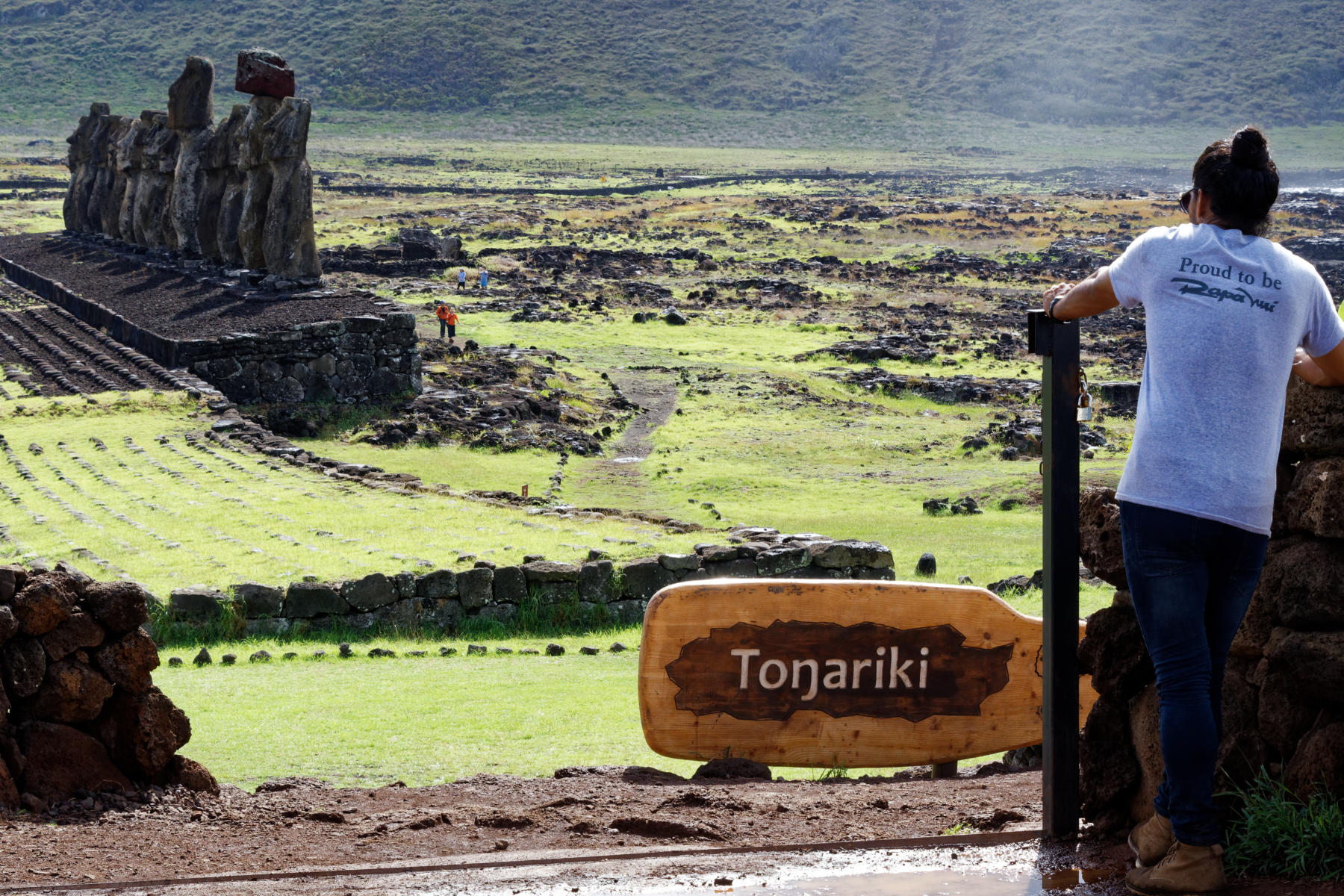 There are 15 moai, the tallest being 9 metres tall and weighing in at 88 tons. 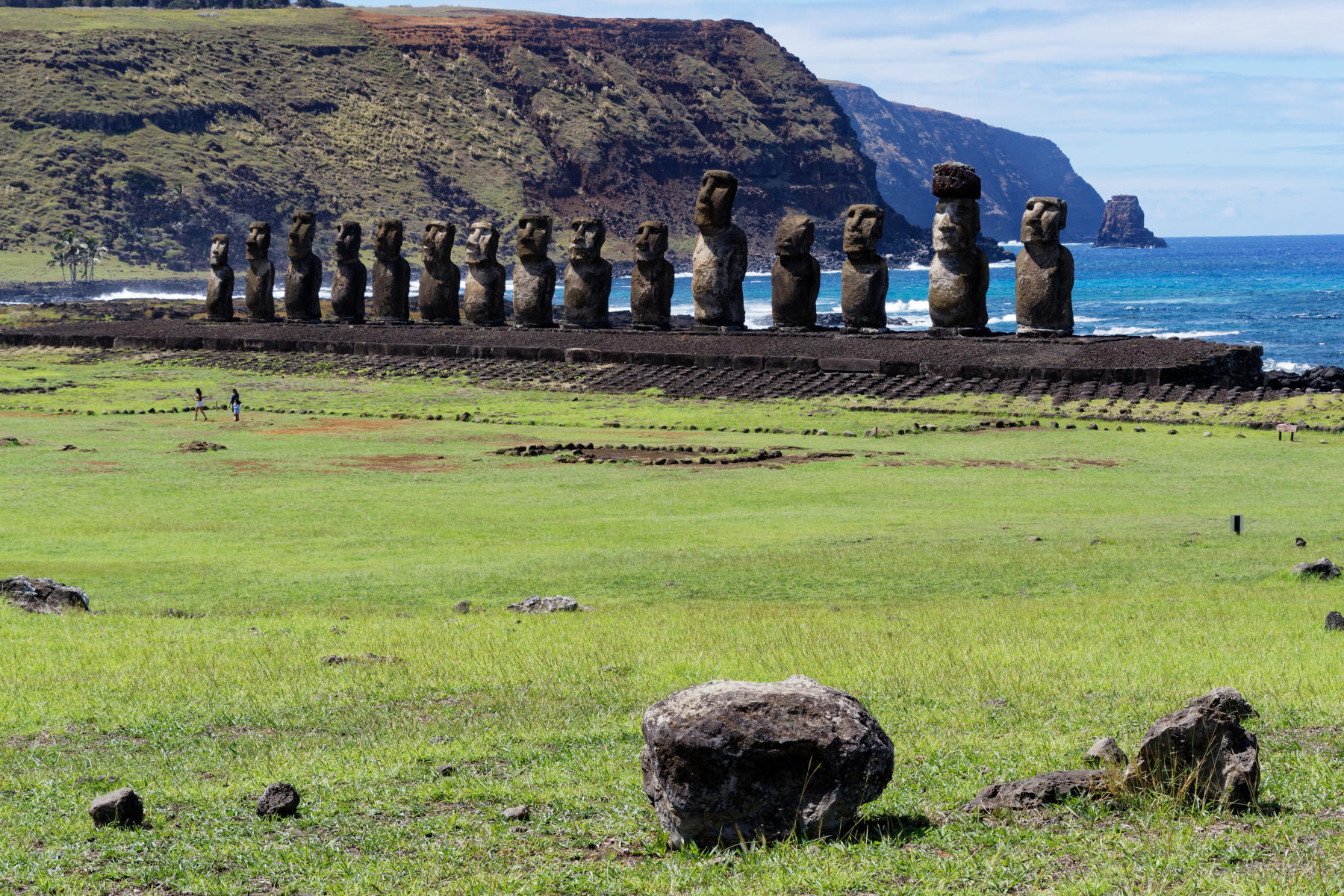 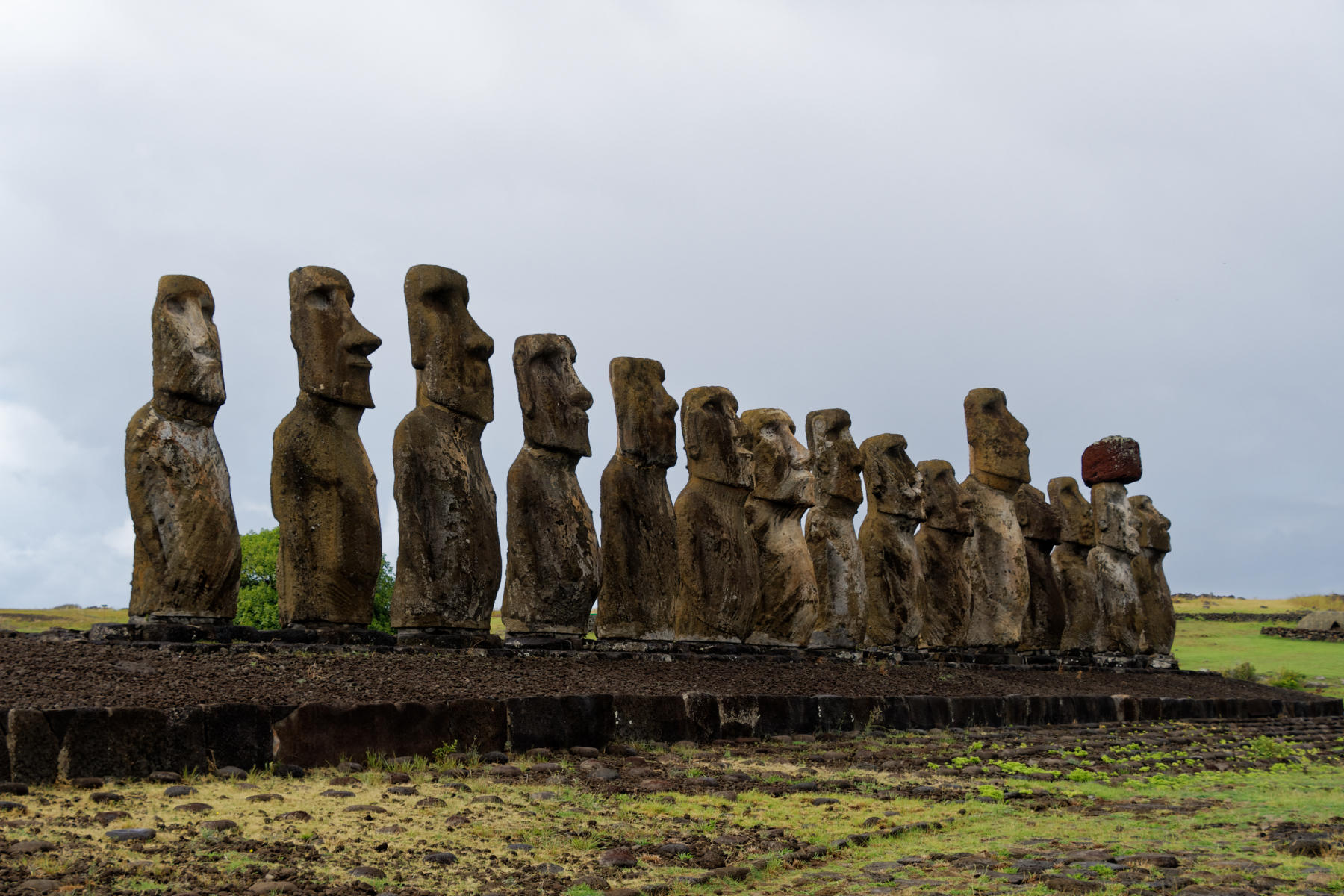 You’ll notice that one, the penultimate one to the right above, has what’s locally called a “topknot” – maybe represents a hat, but no-one knows – but it’s certain that some moai had this and also all had coral-and-stone eyes inserted in the eye sockets to give them distinctive eyes. Nearby this reconstructed set of moai are three things of interest: a collection of topknots that putatively fitted them 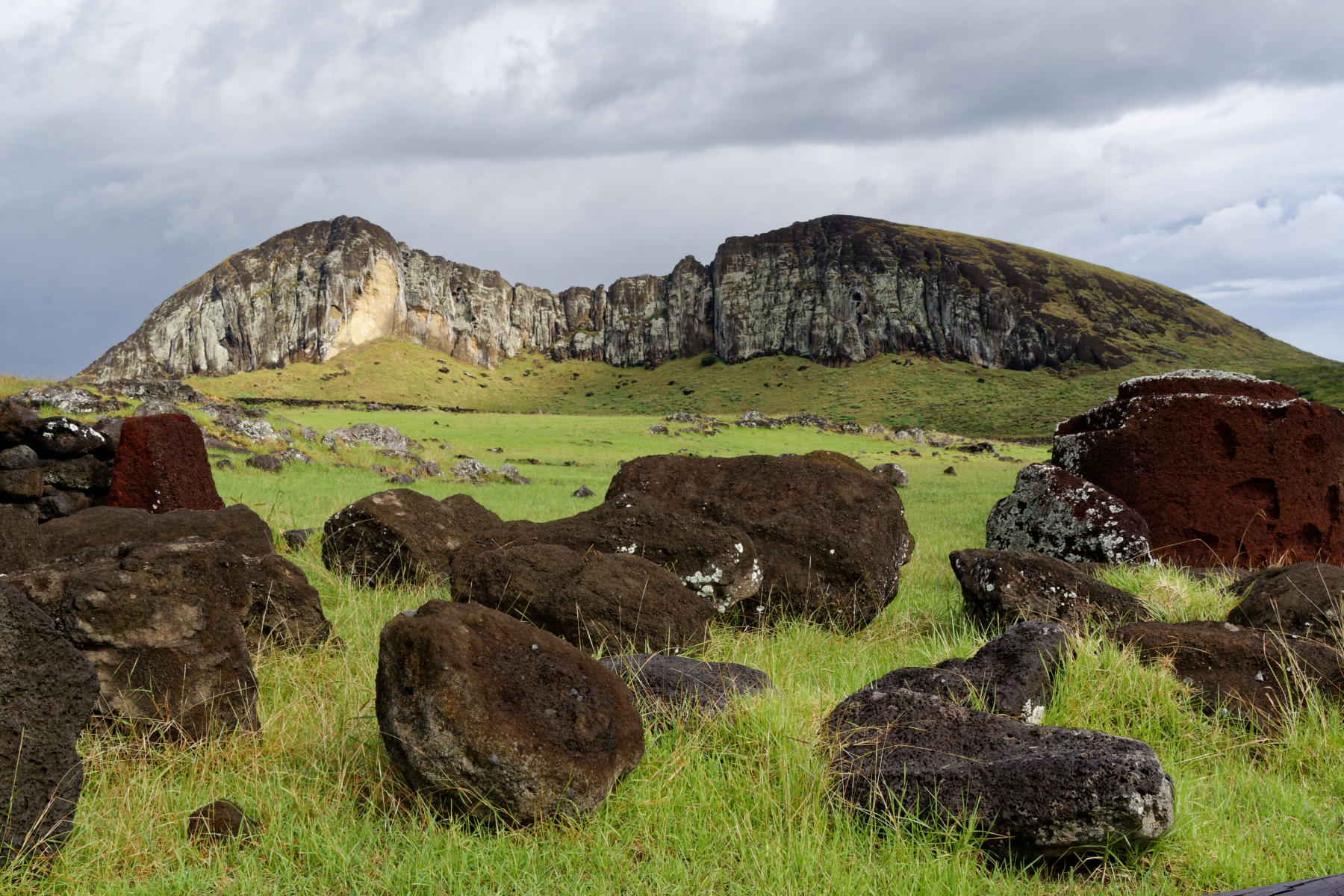 (in the background, by the way, is the quarry where the moai – all of them, for the entire island – were made (see my next blog post); and a small number of moai heads, which were just lying around on the site, putatively the remains of previous very old, decayed and replaced moai. 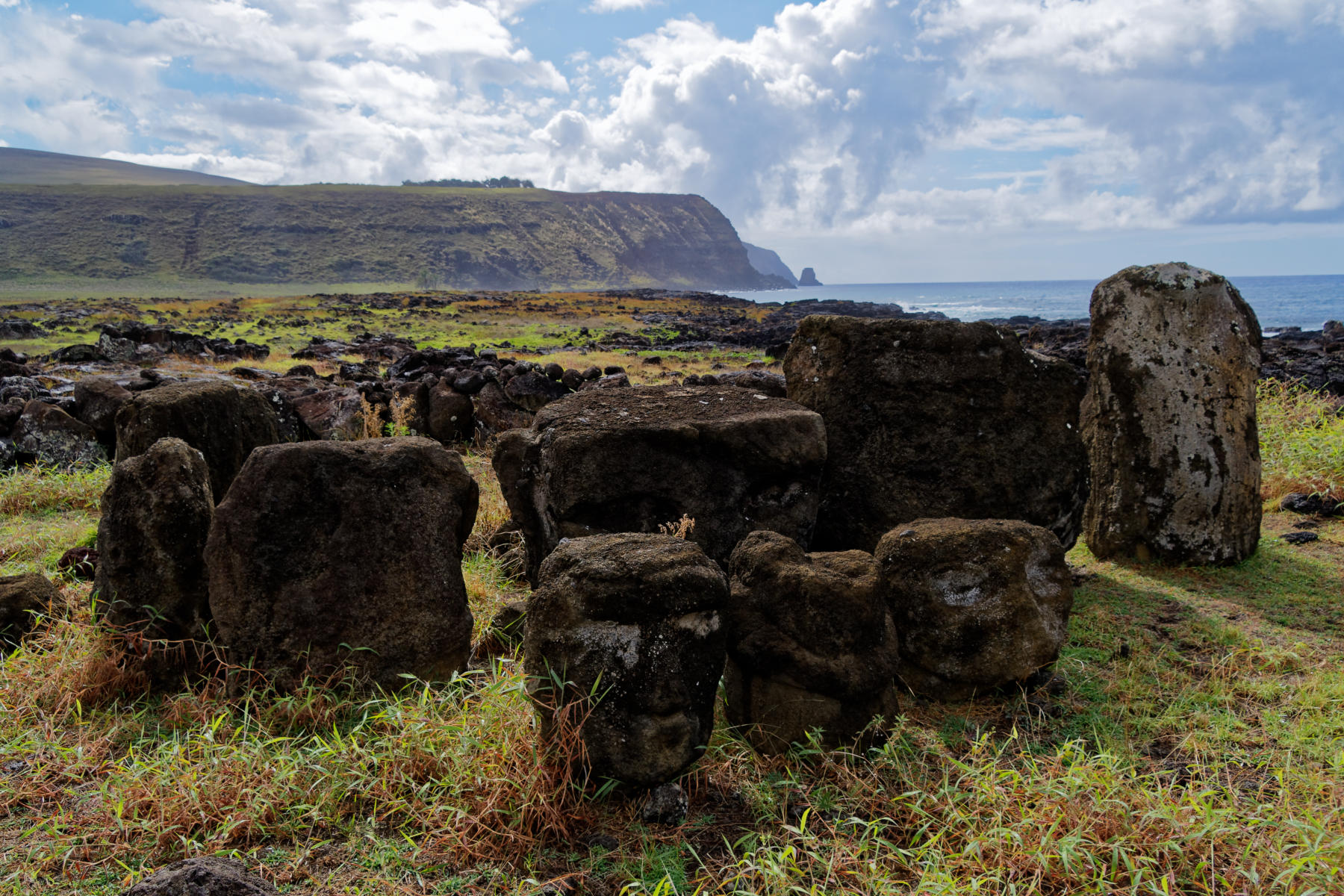 (the one on the right looks a bit like ET, don’t you think?); and a single, stand-alone statue (the travelling moai) which has been used in exhibitions around the world. 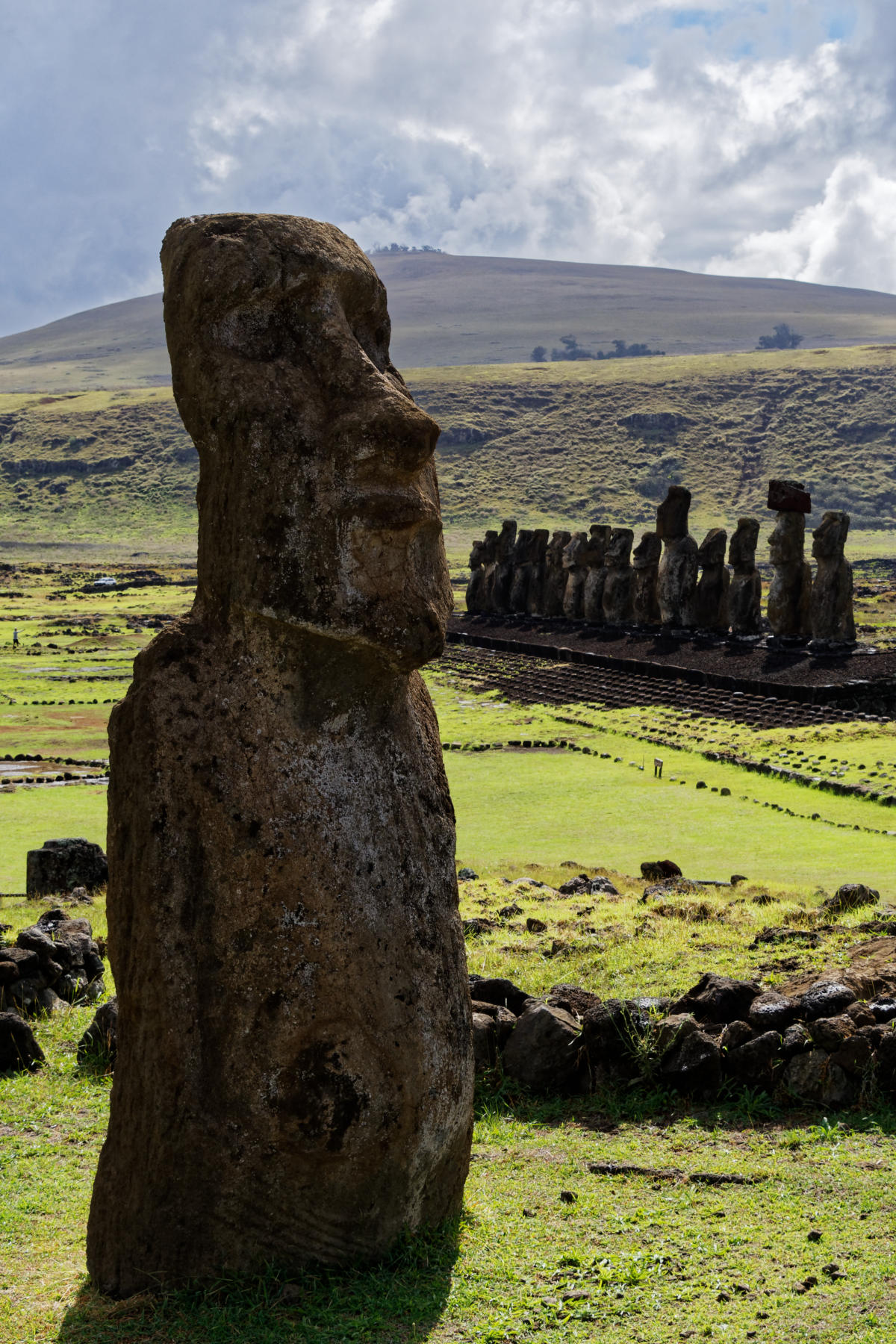 The next stage on our trip involved visiting the site of the quarry where all of the moai on the island were made; it was very interesting, and you can see my next blog post for details. But also, before the day ended, we visited one more site, Anakena, which featured another set of restored moai, including several with topknots. Note that the topknots seem to be towards the front of the statue. This will become relevant in a later post. 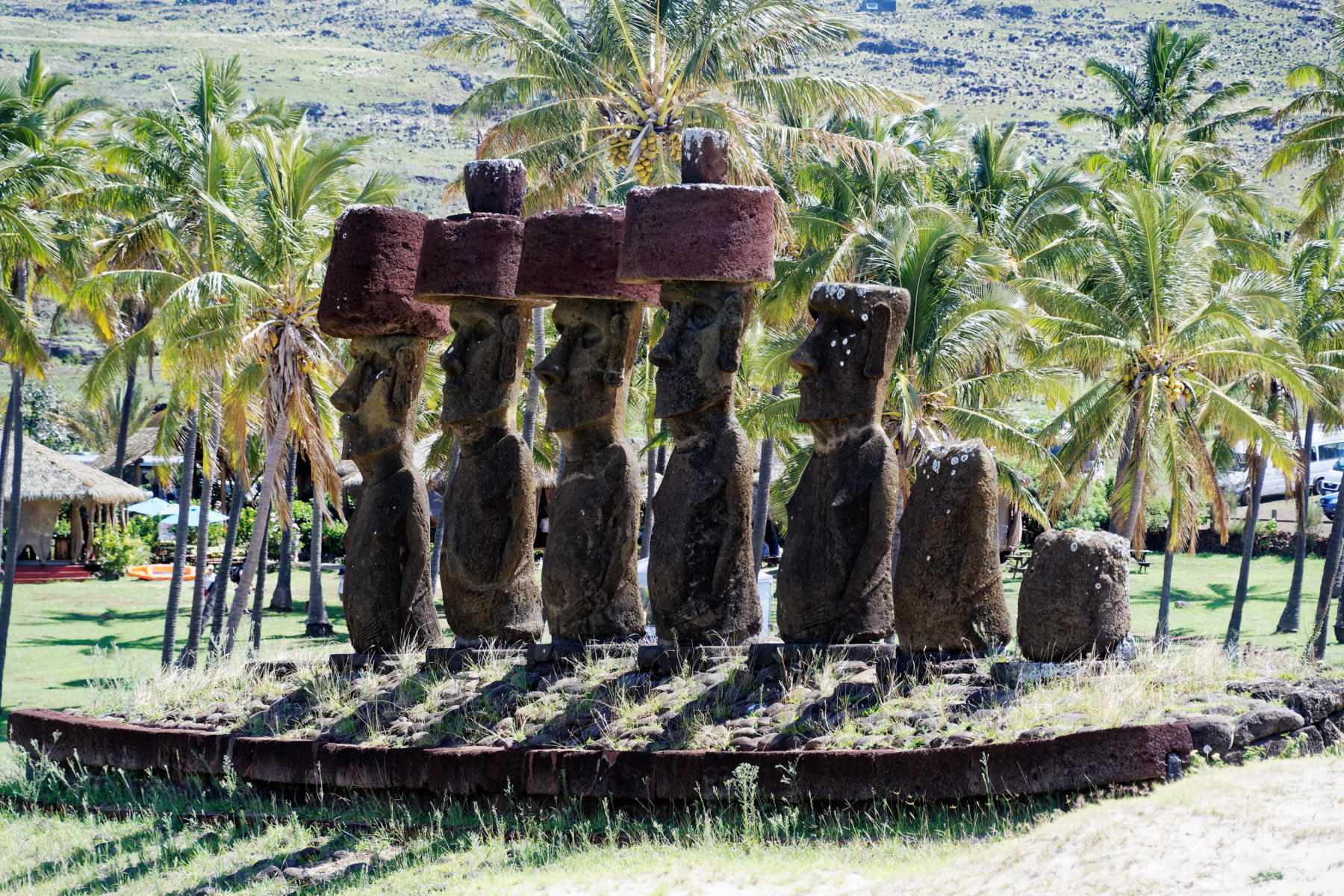 All in all it was a fascinating day, with some of the history and culture of the island revealed as an ongoing story. We heard more – oh, so much more! – on our second day, and there’s also a lot to tell about the quarry where the moai were made, which you can read in the follow-up to this post – click here.