September 27th. Almost, but not quite, entirely unlike meeting an old friend, we returned to Split which (the observant among my readers will have noticed) we visited in the first week of our time in Croatia. I had expected the second visit to be more or less a re-run of the first only in cooler temperatures, but it didn’t actually work out like that.

Although the sun was shining and the visibility was good, the approach to Split from the sea was not as good a photo opportunity as I had expected. It’s Croatia’s second-largest city (behind the capital, Zagreb) and is clearly a huge tourist destination, which we could infer from the large cruise ships parked at the edge of the harbour. And the city sprawls to east and west and so is difficult to capture in a single photo. You can get some nice shots on the approach, but only by zooming in to cut out, as far as possible, undesirable elements. Bits of it look nice 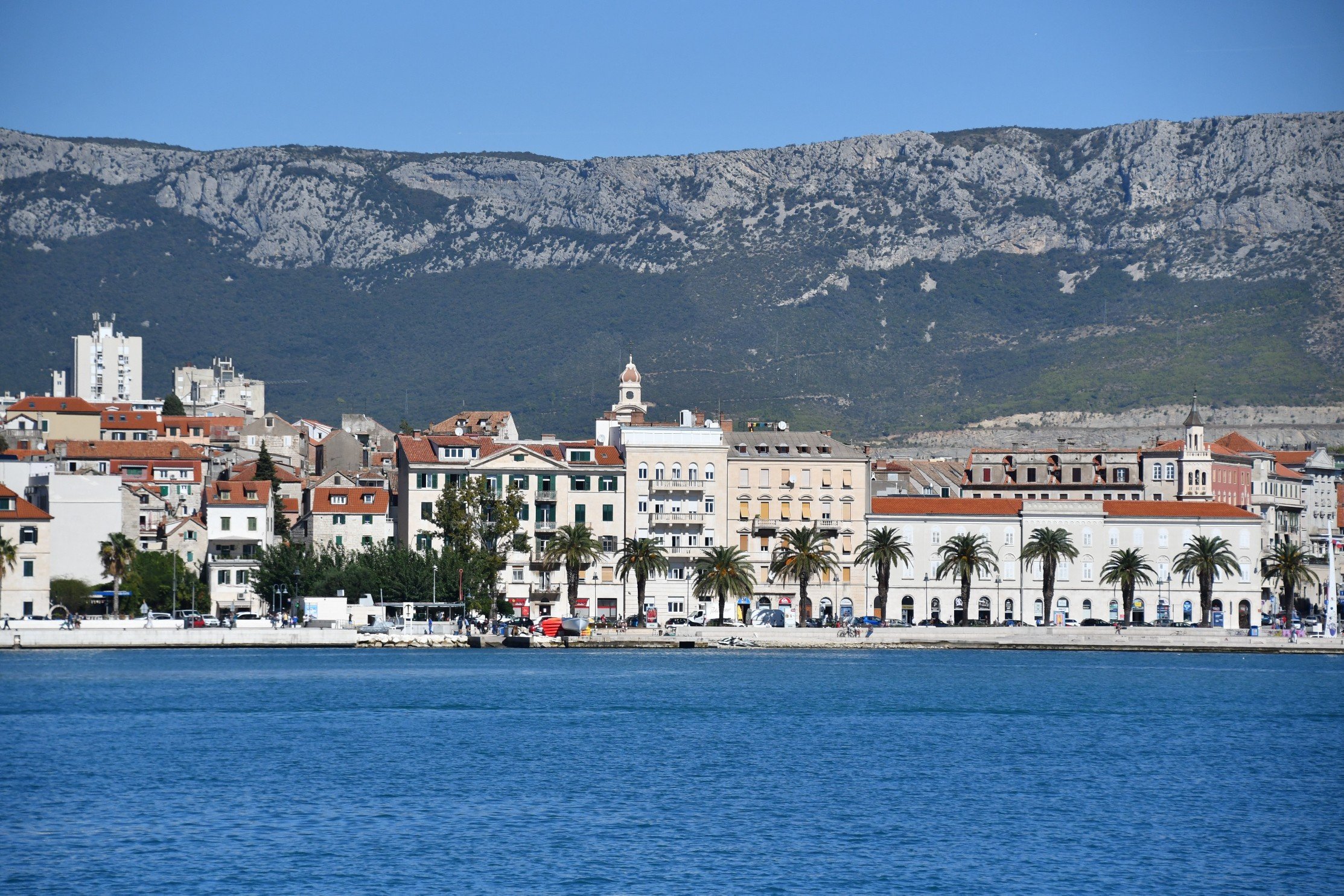 but even in the shot above, you see a few modern and less attractive apartment blocks. The bell-tower in the Diocletian Palace is a clear landmark. 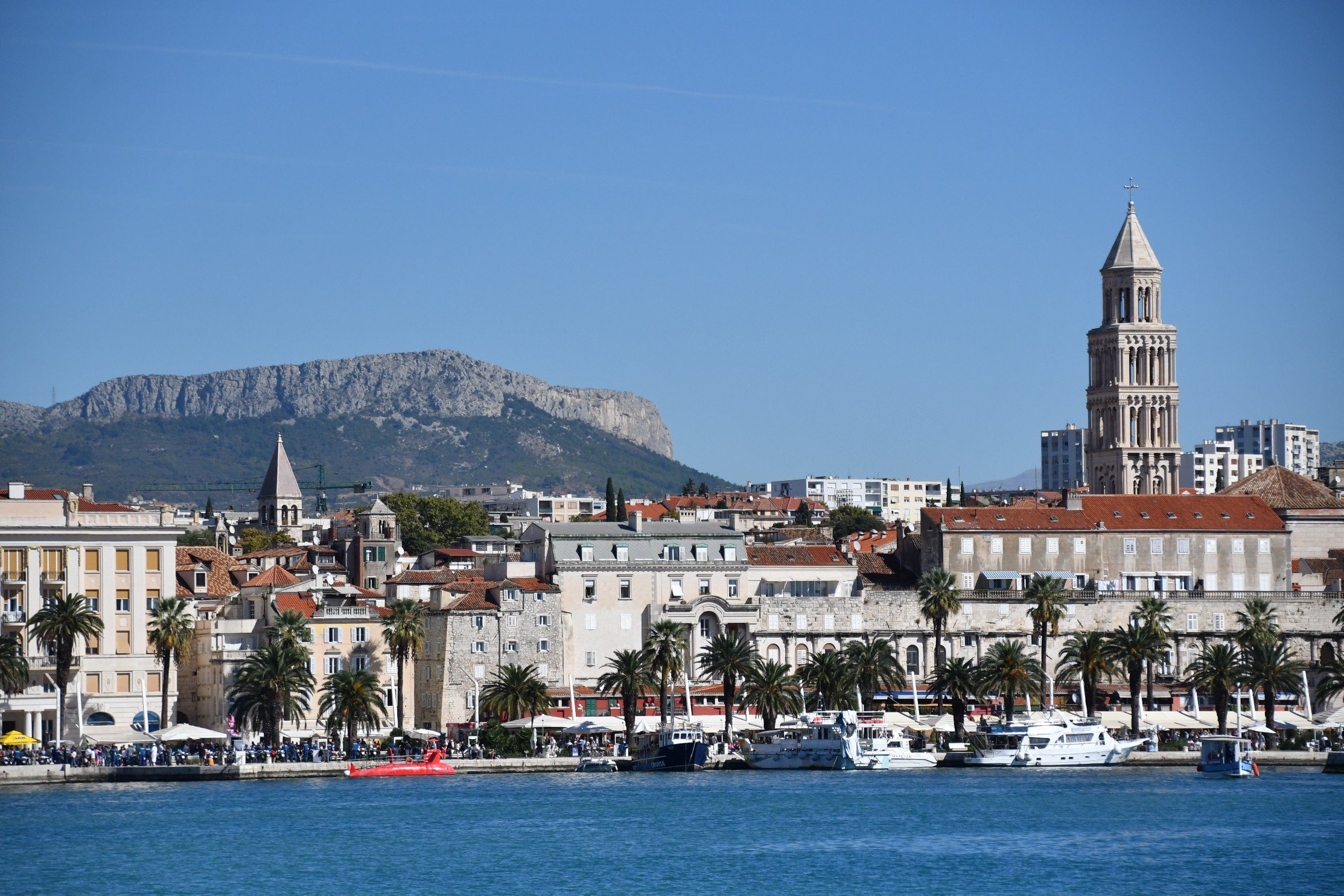 We arrived in Split just before lunchtime, and tied up to the south-west of the city for lunch and an instructive lecture from Filip about: times Roman from 1st to 4th Century AD (up to the time of Diocletian, of course); the growth of both Eastern and Western Roman Empire under Trajan; the military prowess of Diocletian (which established him as #3 in the all-time hit parade of Roman emperors); his setting up of a tetrarchy; and the length of his rule – nearly 20 years, which was a long time to survive as an emperor – before he retired (the only Roman emperor to do so) to the palace he had built in Split (believed to have been his birthplace).

We disembarked at around 1.30 to gather for our walk to and around Split, and were approached by a tall, extravagantly made-up, dubiously blonde woman who waltzed up and said “hello”, in a very deep voice. I was about to tell her that whatever it was that she wanted to sell us was something we weren’t interested in when she was greeted warmly by both Filip and Tom, our captain. So it turned out that she (Stella) was to be our guide, so I’m glad I didn’t say anything, particularly as she was bigger than me.

As we walked into Split, we actually saw our first – and only – Dalmatian dog! 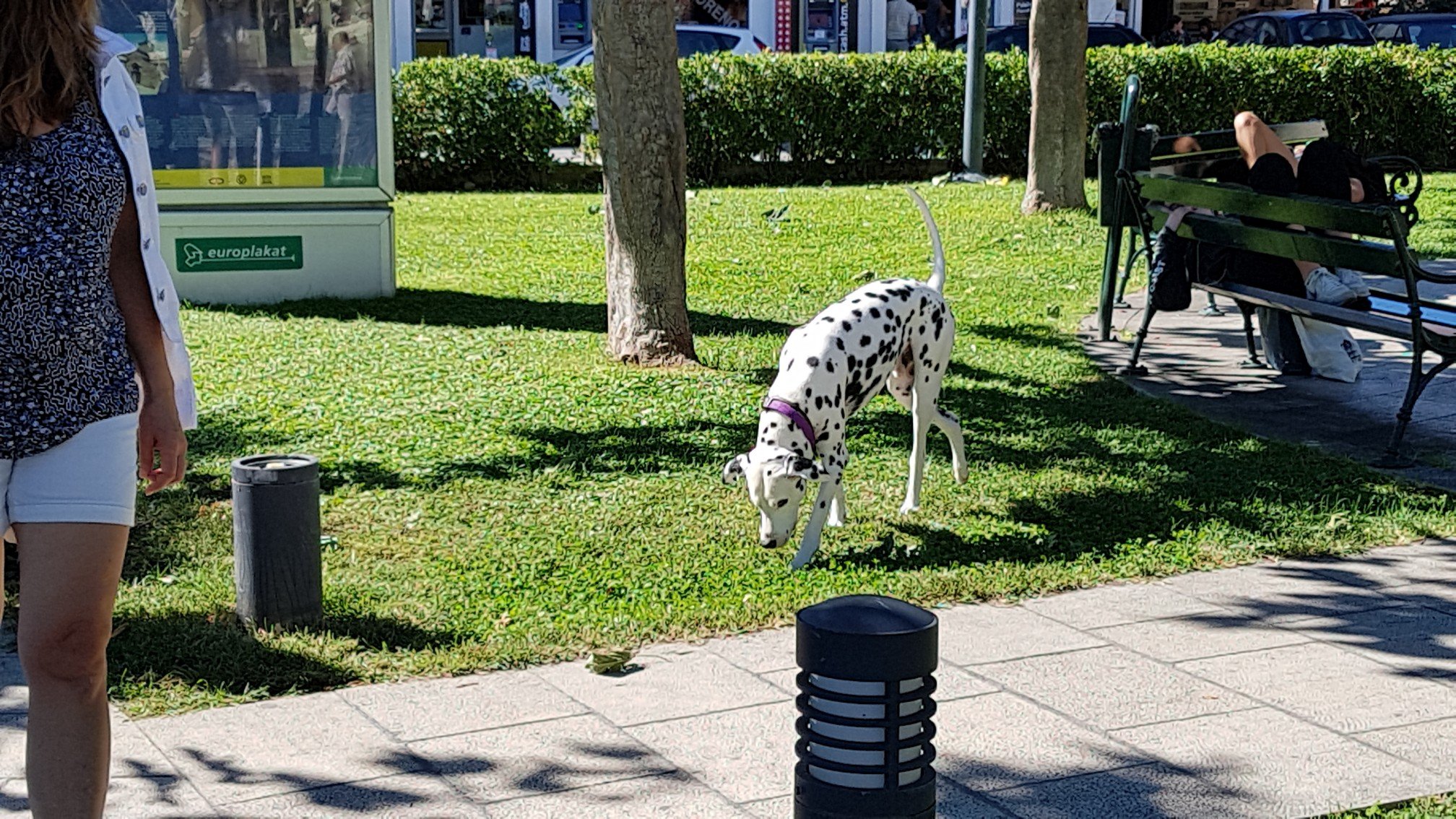 (well-spotted by Jane). We gathered around the bronze model of what the powers that be thought that the Roman palace probably looked like, before entering the palace by the south gate, as we had the previous week. But instead of carrying straight on as we had before, we turned left and went much deeper into what was the basement part of the palace. The skill of the builders in designing and constructing arches, vaults and ceilings was apparent 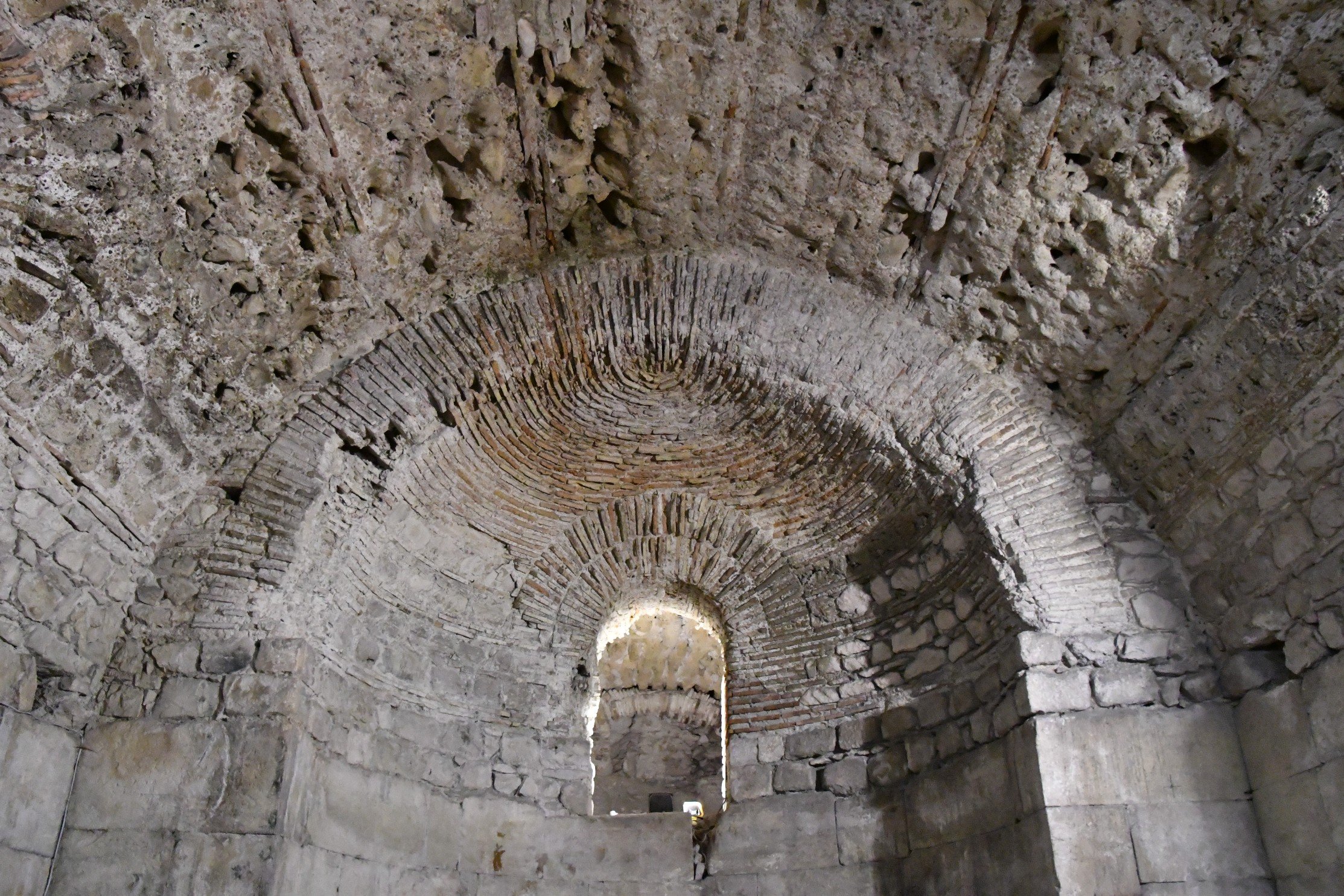 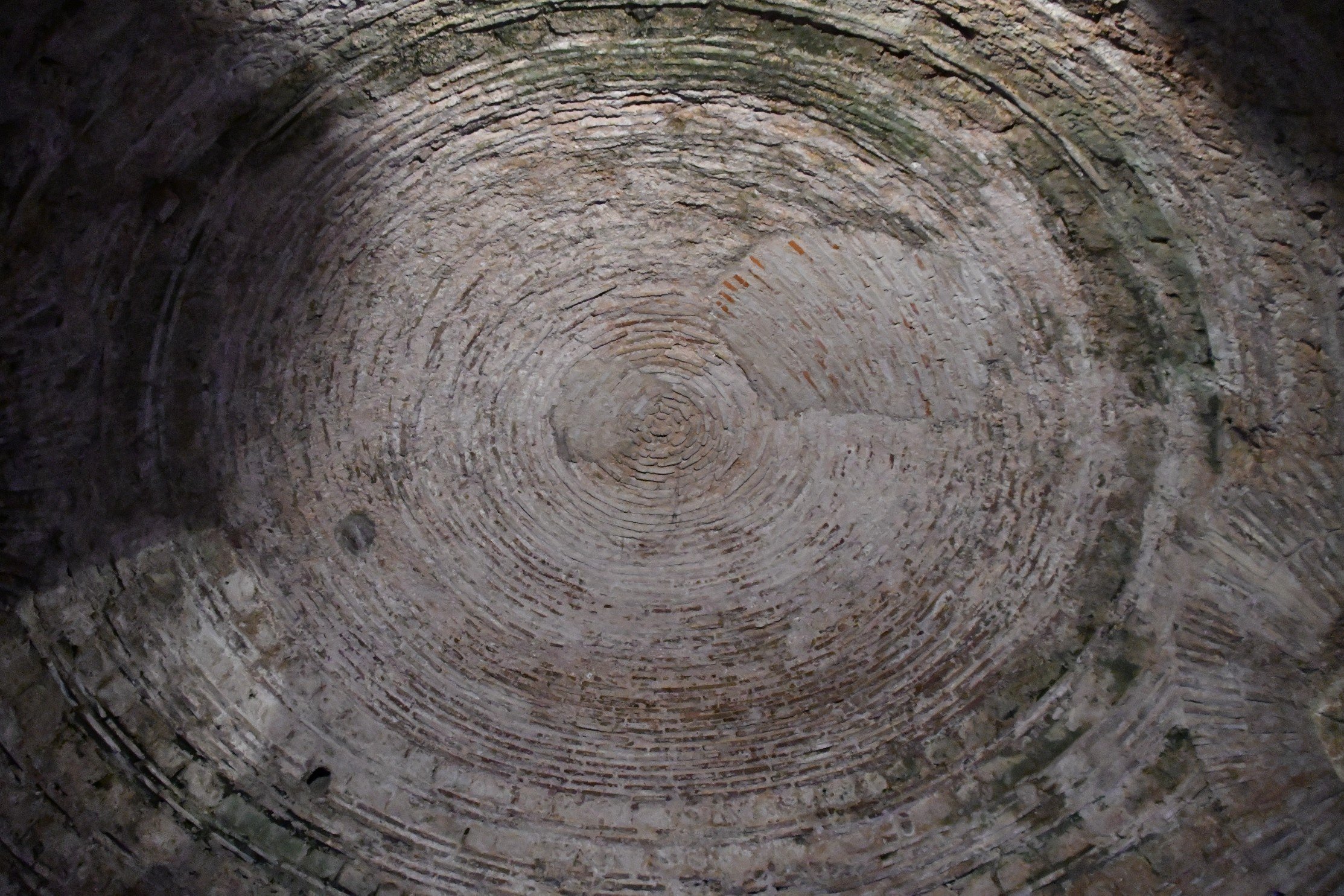 as was the scope of the archaeological excavation – the entire basement had been largely used as a rubbish dump in medieval times and it takes a long time to excavate and restore such large spaces. 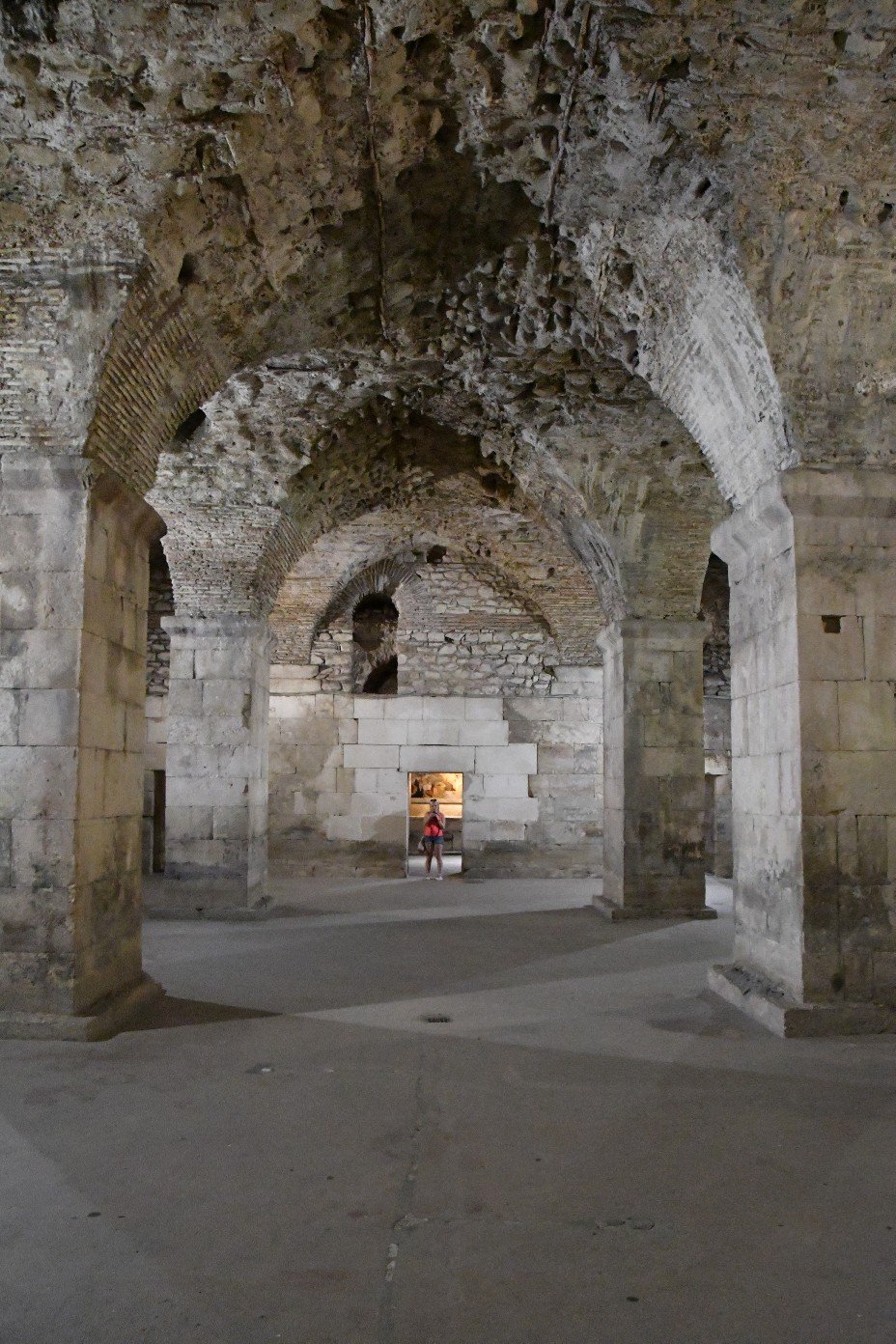 Some interesting things have been found, such as a thousand year old cedar timber 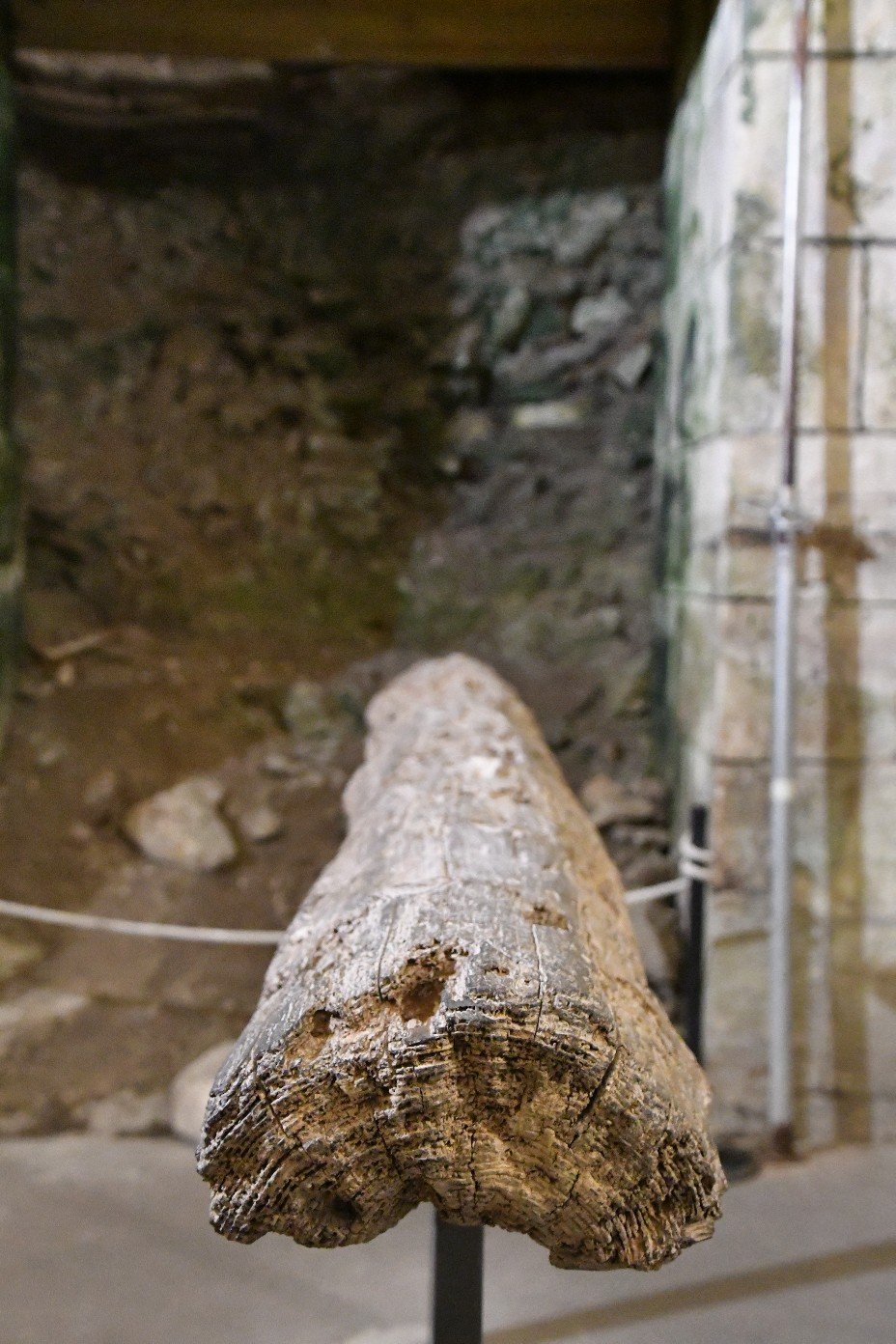 and in the back of the chamber, some workings have been left which give some idea of how awkward the excavation must have been. 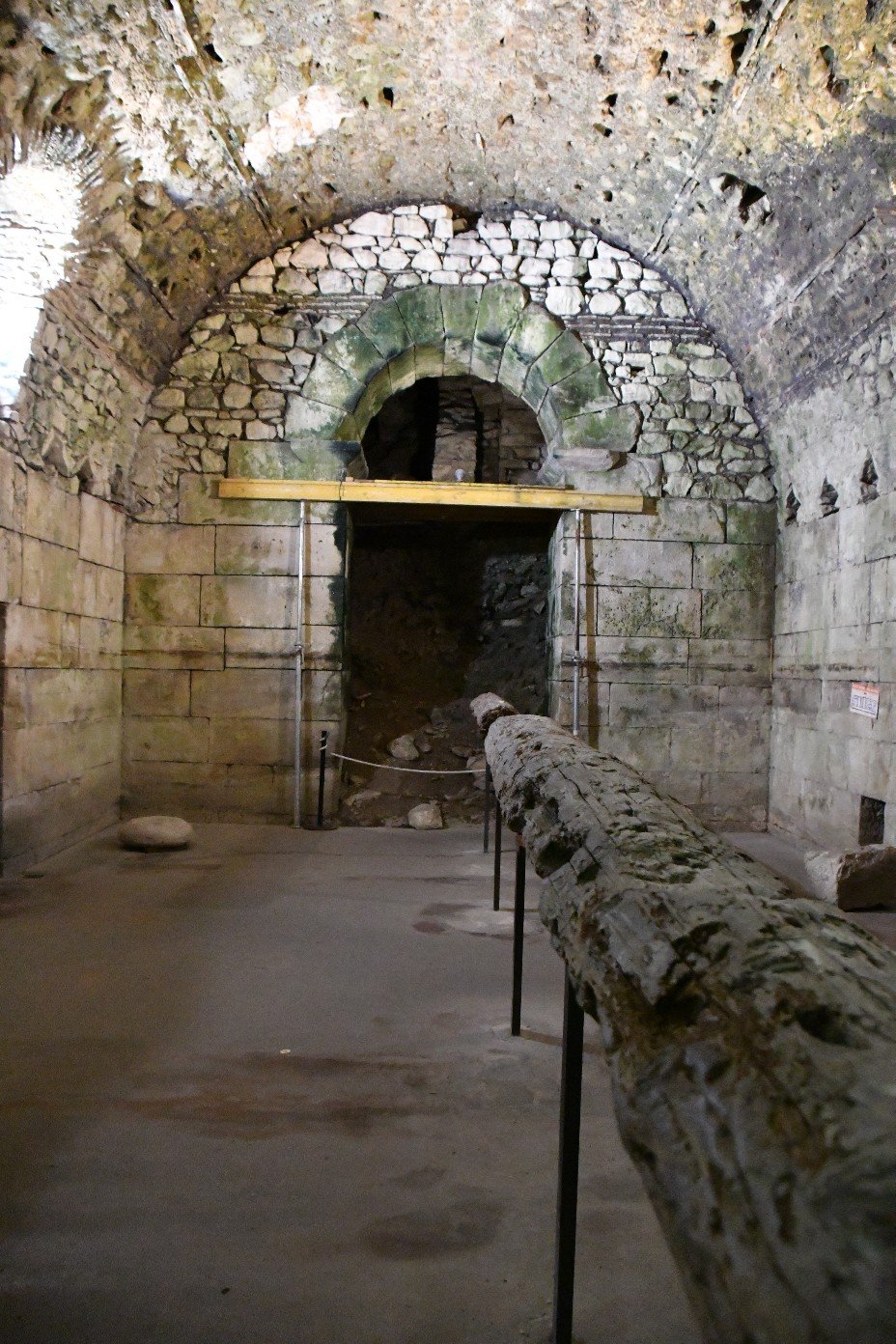 Here’s a close-up of the compacted rubbish of ages. 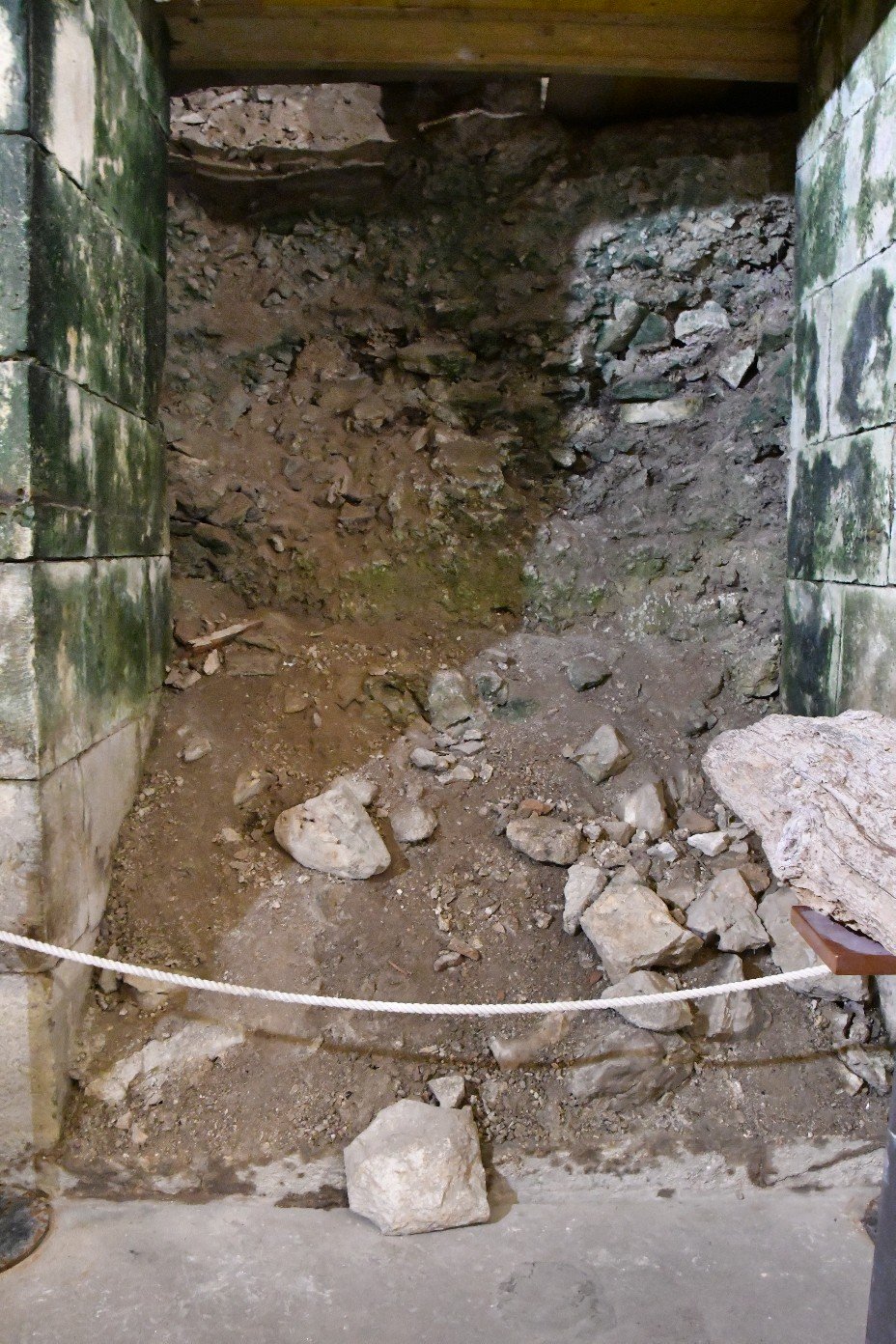 Some glimpses of the upper levels can be caught – for example this view of some bottles in a cafe somewhere above us. 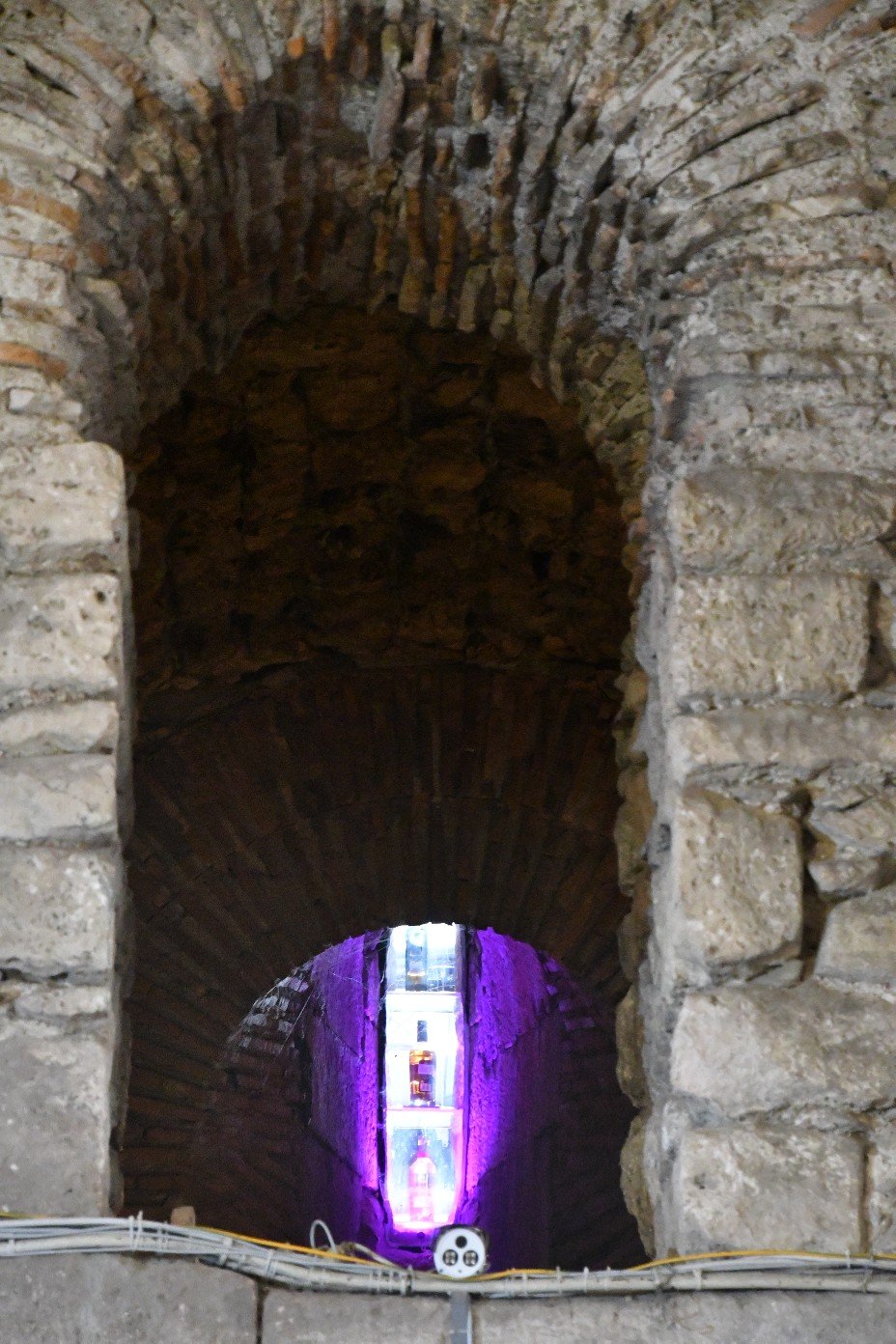 After wandering round in the basement levels, we finally emerged, blinking, into the above-ground levels of the palace. Diocletian (much to the fury of Rome) gradually adopted the Egyptian attitude to ruling which basically involved asserting his godhood; to bolster his claim he brought several sphinxes and many porphyry columns from Egypt which was then under his control. The largest surviving sphinx is on display in the main palace courtyard 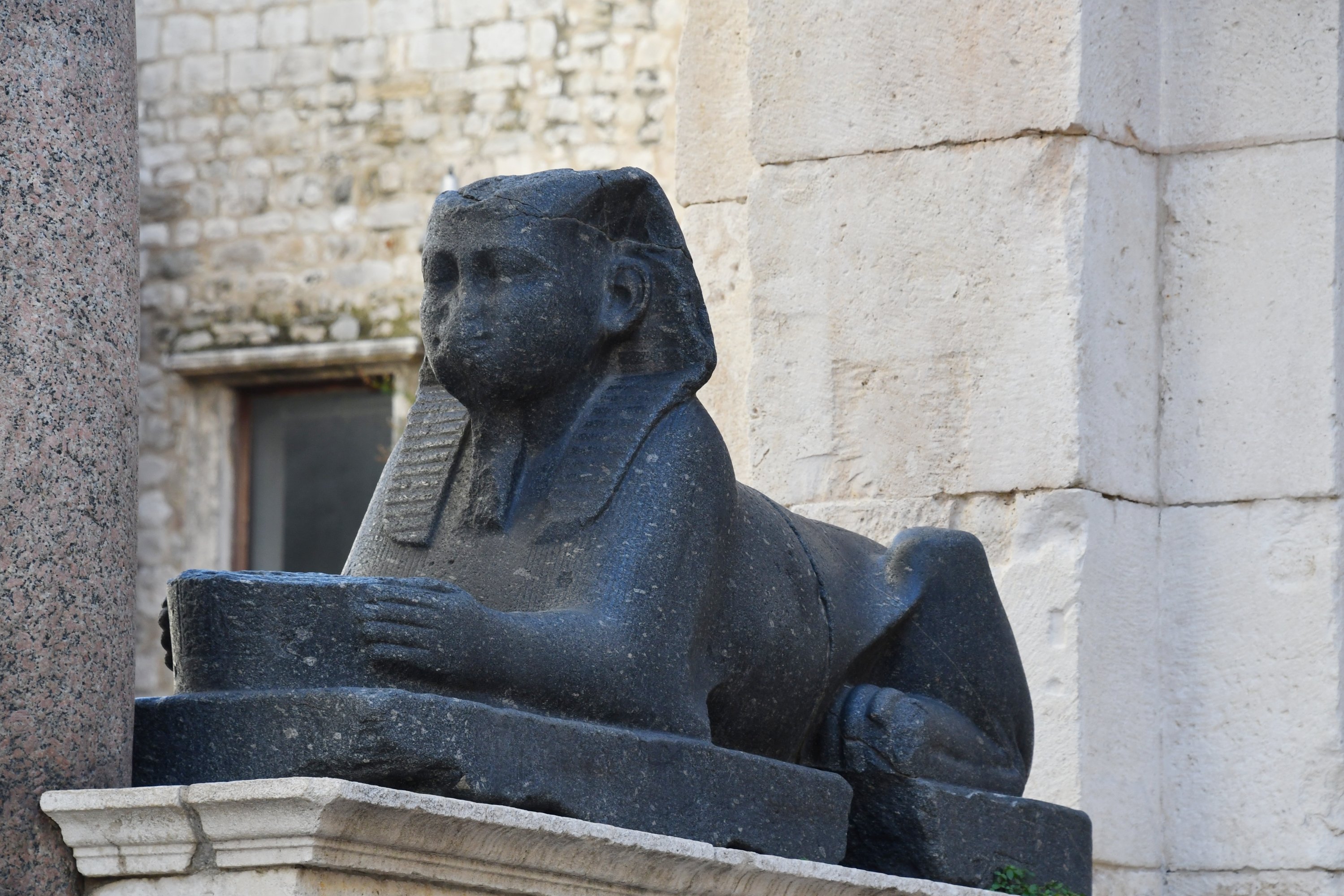 After a coffee break, and some delicious ice-cream (the ricotta-and-fig combo went down a storm with most of our group members trying it), we then went to the temple of Jupiter, which is adorned with the work of Roman sculptors who used a new technique of fast drilling, thus enabling greater intricacy among the detail work. 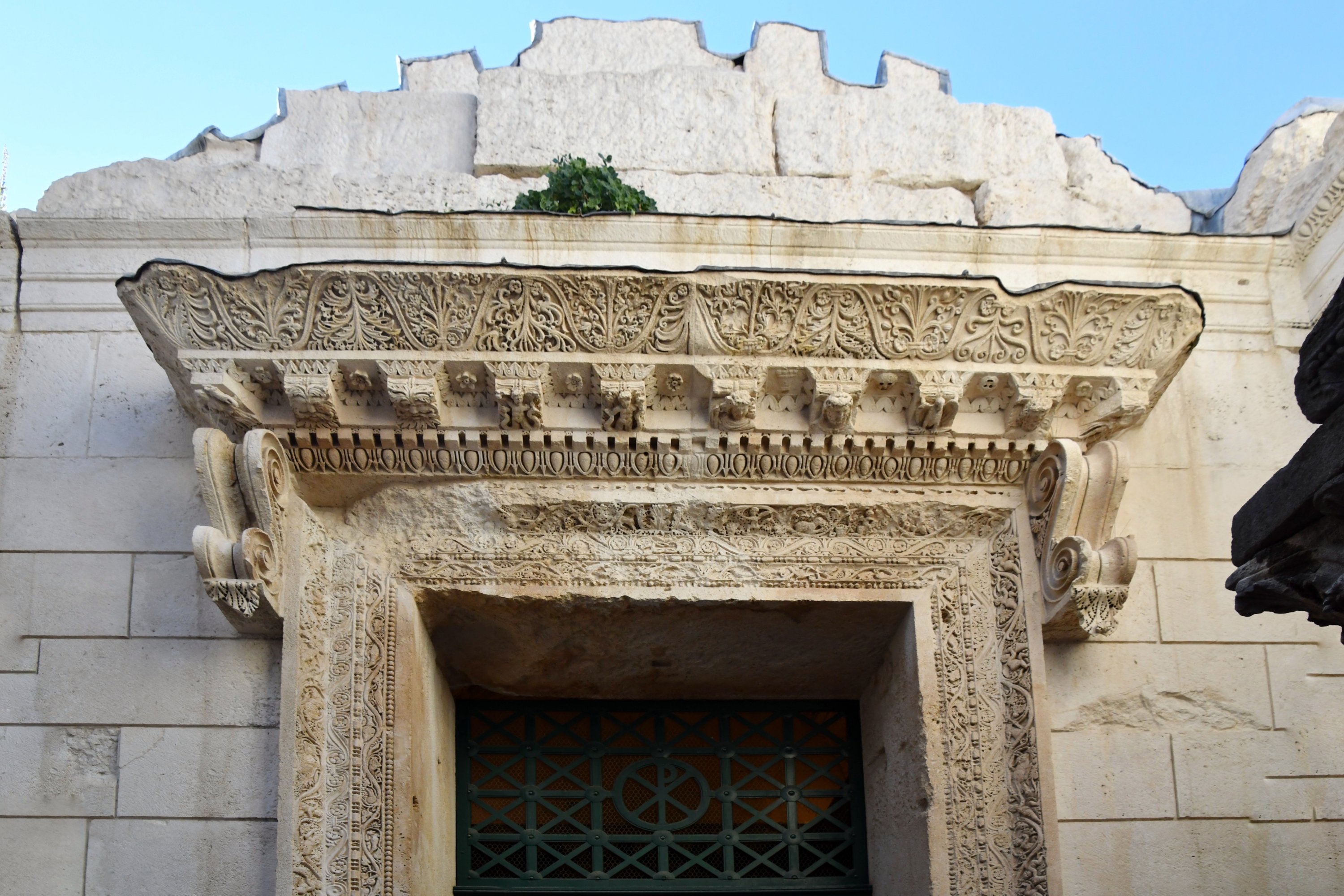 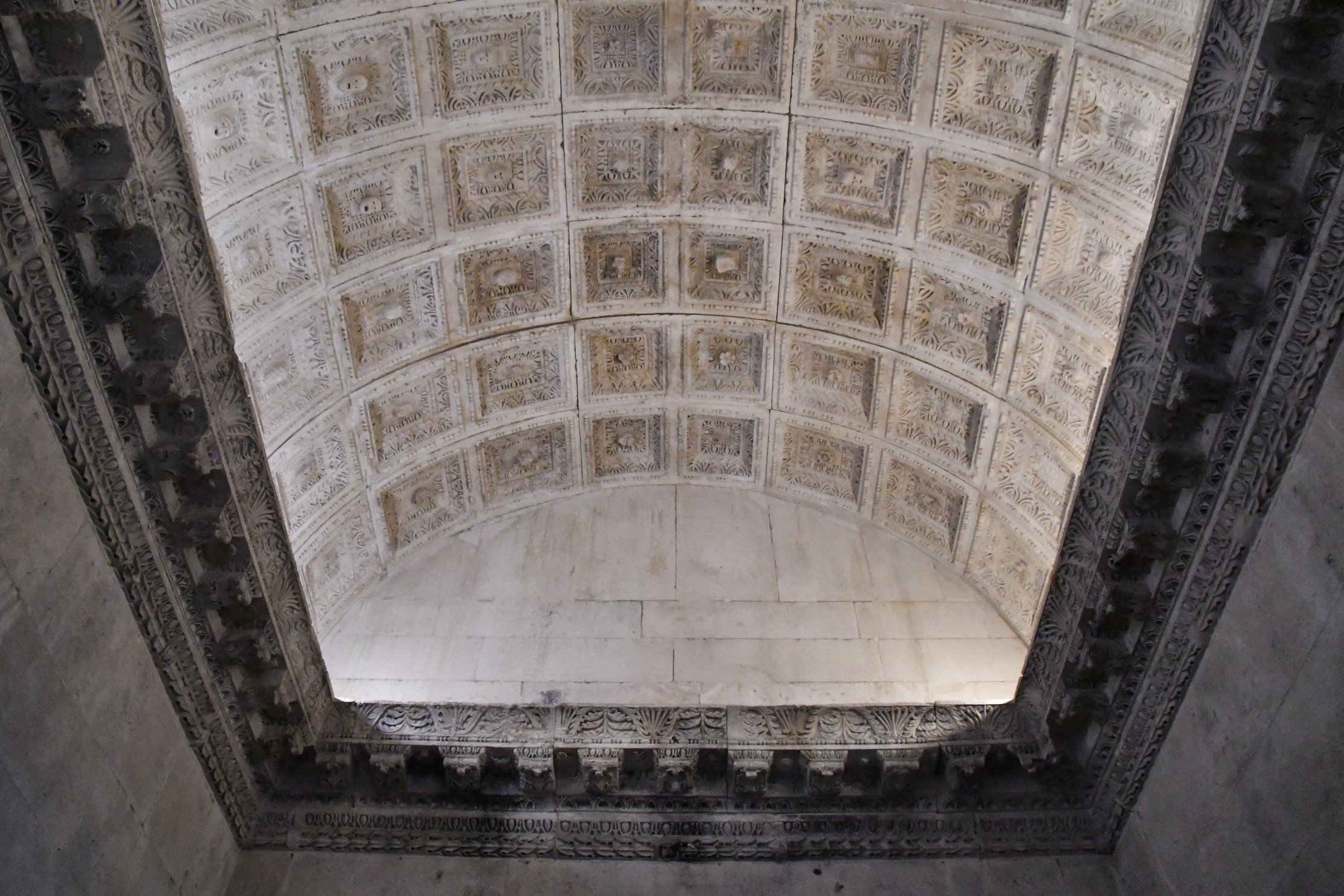 We also visited the cathedral, essentially a re-purposing of Diocletian’s mausoleum (ironic as he was notorious for his persecution of Christians) which is decorated in real religious bling.

Running around the top of the mausoleum is a carved mural depicting various scenes of Roman life, including hunting. 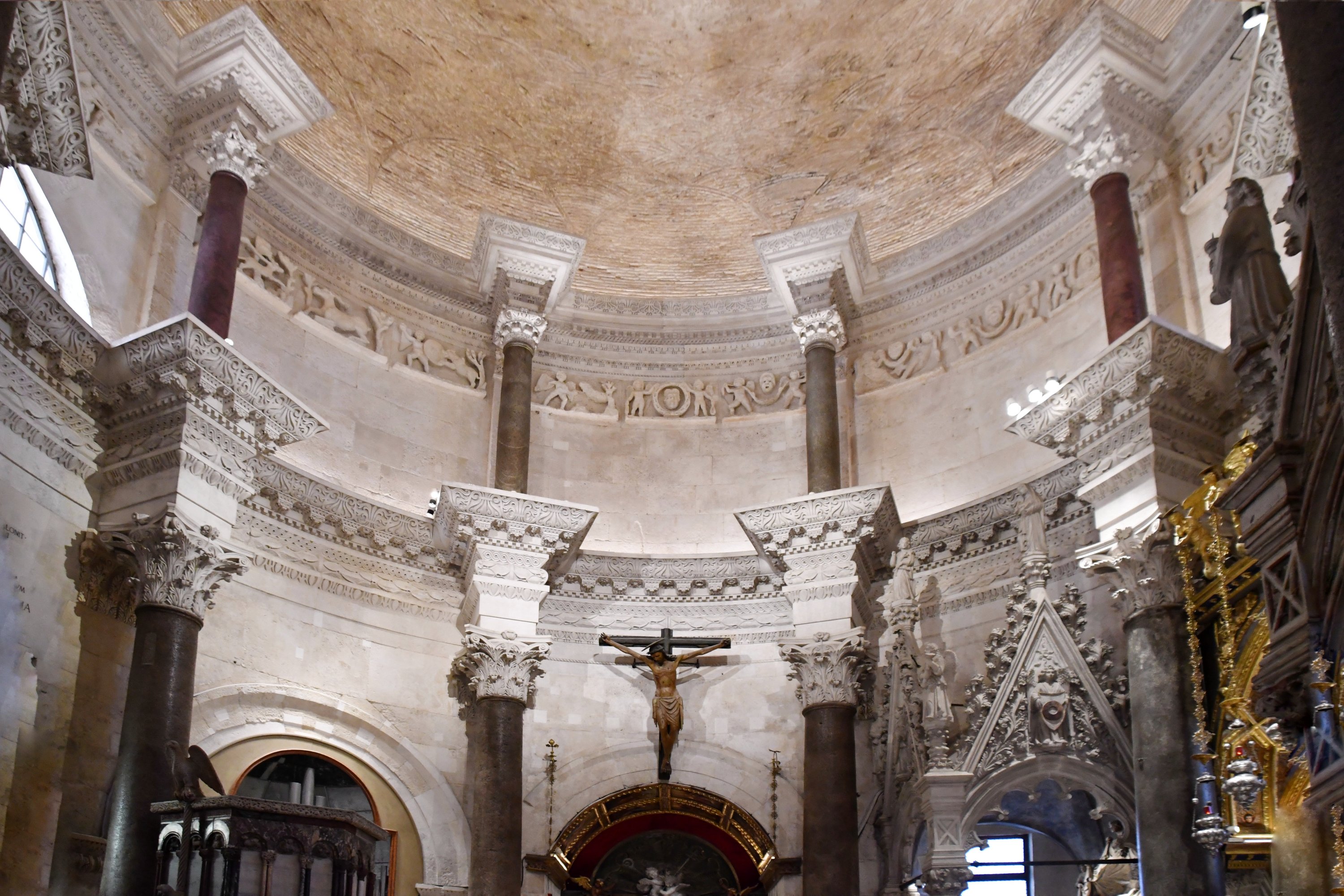 The story goes that Diocletian received a prophecy that if he killed a boar, he would become emperor, and that this gave him the idea to kill his predecessor, whose name was the Latin for “boar”; perhaps this carving is Diocletian justifying his actions? As in so many cases, “no-one knows” the exact truth and there is much speculation about the details of history of this time, as indeed there is about what the basement areas of the palace were used for.

Modern, historical and Roman life come together in a shop just off the main square. 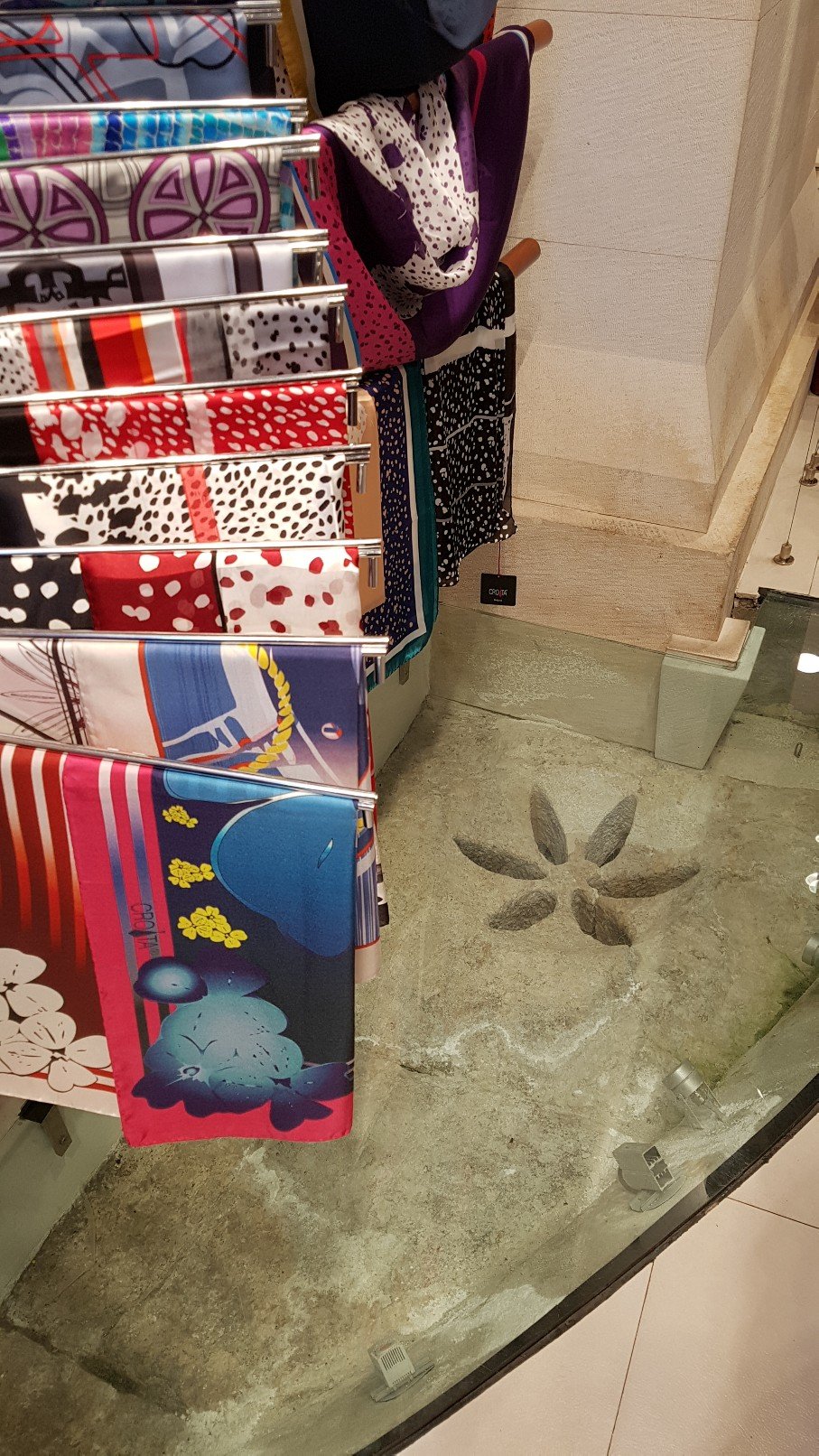 Here you see: a part of the drainage (sewerage?) system of the original Roman palace, preserved under glass within an upmarket scarf shop (similarly, next door is a bank where the PCs and desks of today’s office are set among the pillars of the ancient Roman palace). Filip also explained that in the times of Louis XIV, the Sun King, Croatian mercenaries in France wore distinctive cloth around their necks to identify them, in a style called “à la Cravate” – a description and appearance which has given the name “cravat” to today’s posh neckwear.

Before we left the palace for a final stroll round Split, we were treated to a small snatch of “Klapa” – traditional Dalmatian singing – in the vestibule of the palace courtyard.

After that, Jane and I made our way back up to the terrace we had visited the week before, in the expectation of getting a much improved view over Split, It was certainly clearer and the afternoon light looked good over the city, but it wasn’t quite the spectacular photo opportunity I had expected. Still, not too bad a view. 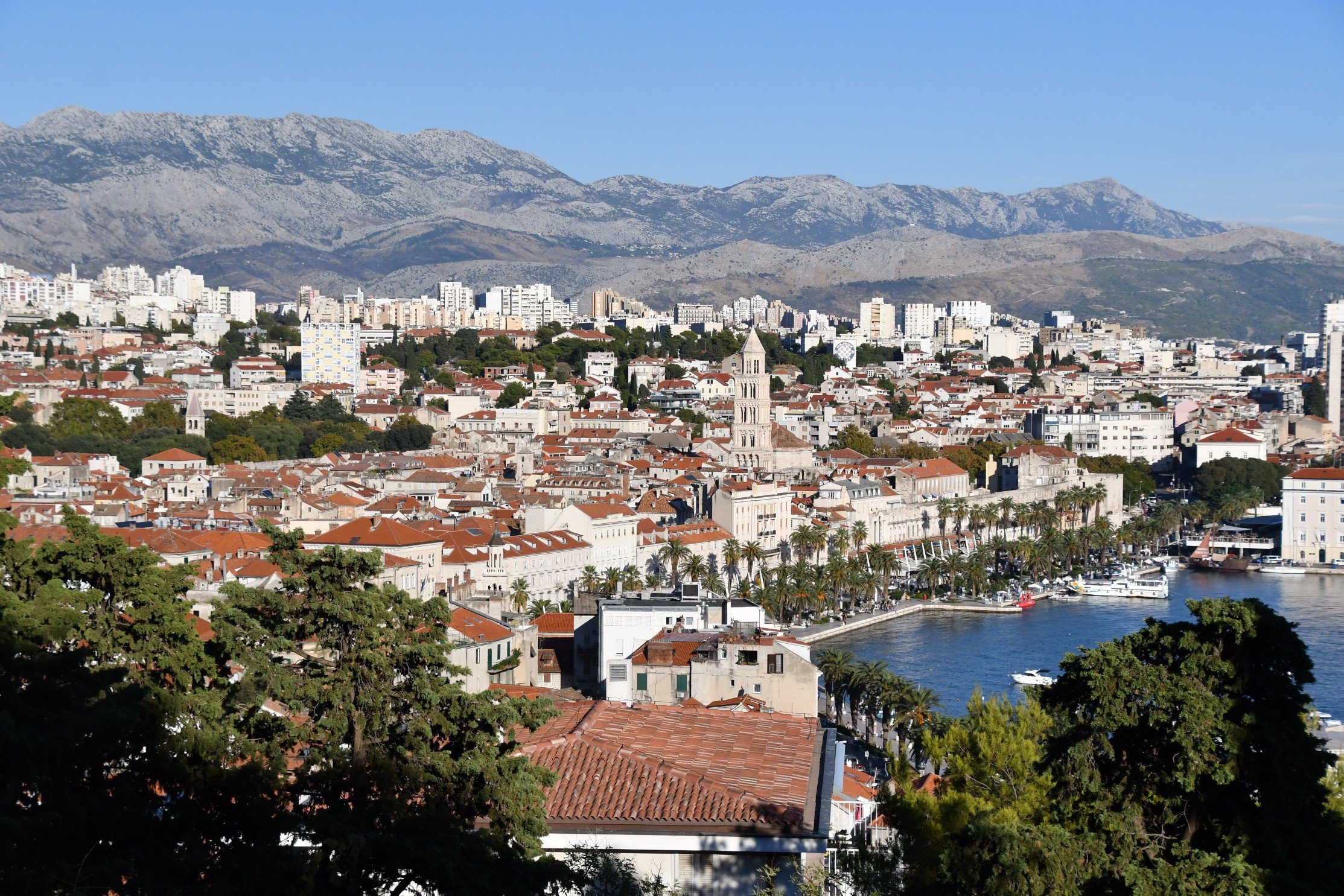 In the evening we took a longish walk around the harbour and into the 19th-century back streets of Split to a restaurant called “Ostarija U Vidjakovi”, where we were treated to a traditional Croatian dish called “pasticada” – very tender beef, which had been marinated and then slow-cooked in a rich sauce, served with gnocchi. This was extremely tasty, and very filling, so we were glad for the 25-minute walk back to the boat to settle the meal down before retiring for the night.

The morrow held out the prospect of visiting an old town called Trogir. This had not been on the original itinerary, but because of the vagaries of the weather during the week, we now had the luxury of the extra time to visit it. So, I’ll describe how that went in the next entry. I’m quite looking forward to reading it, myself…. 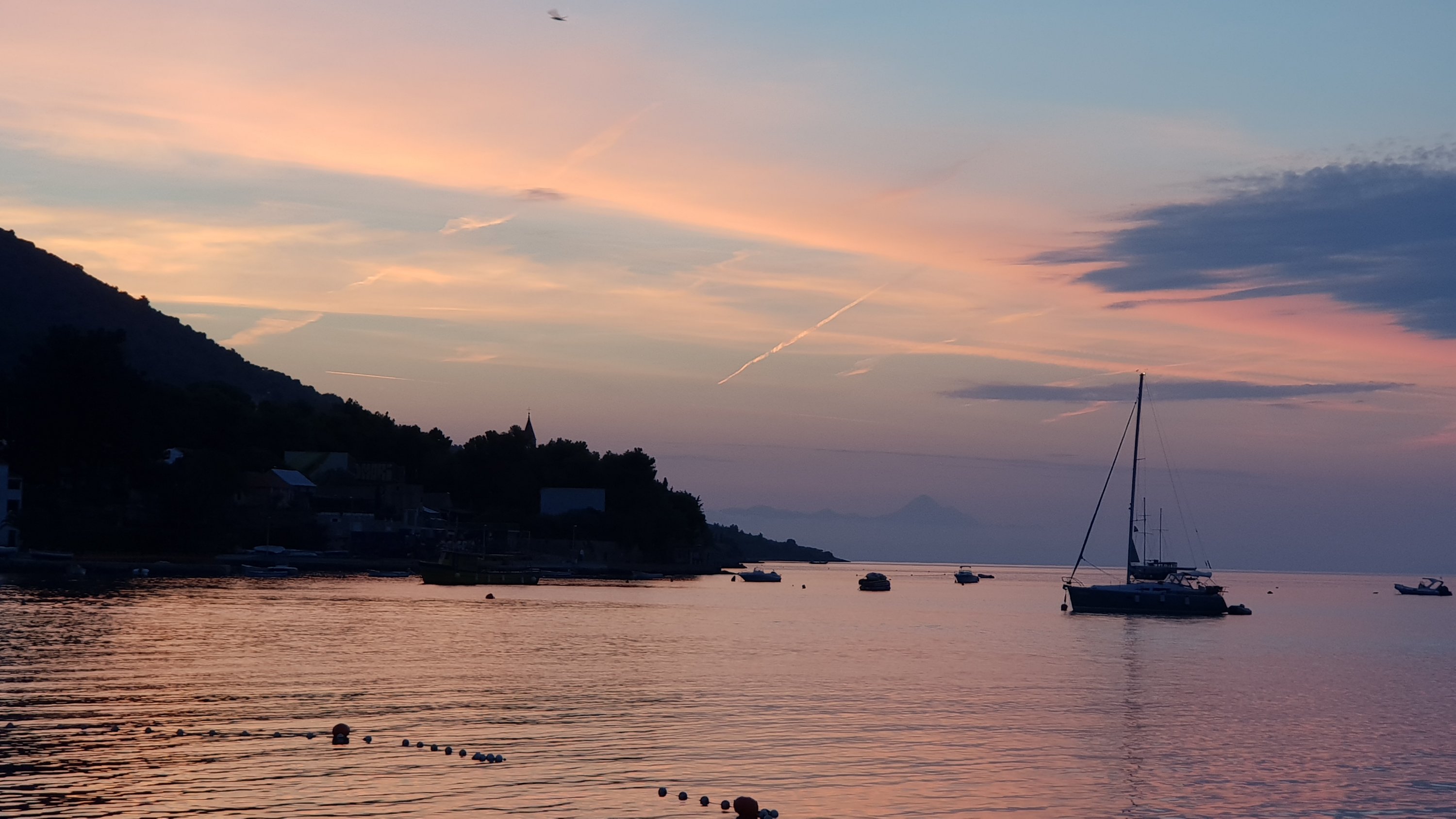 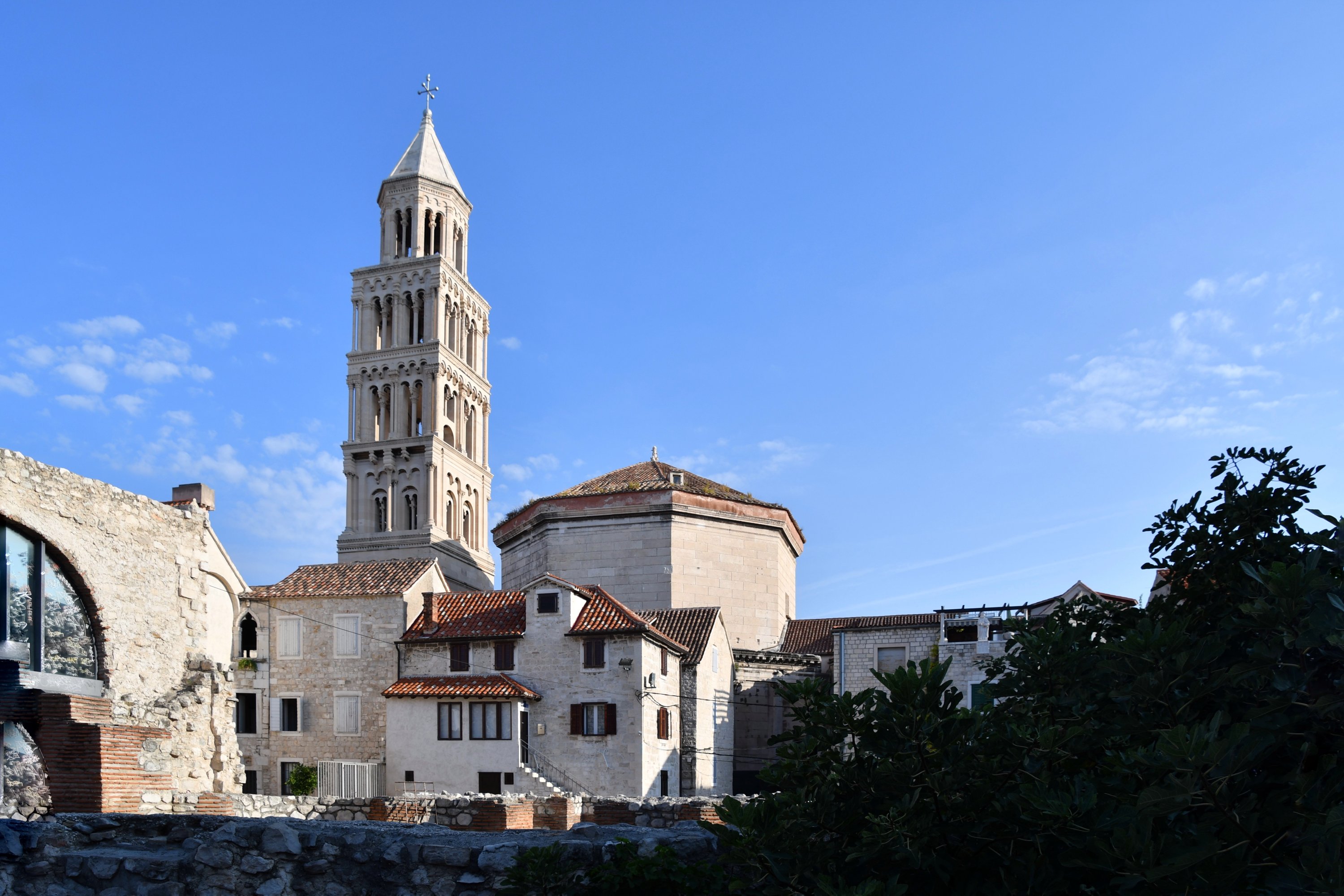 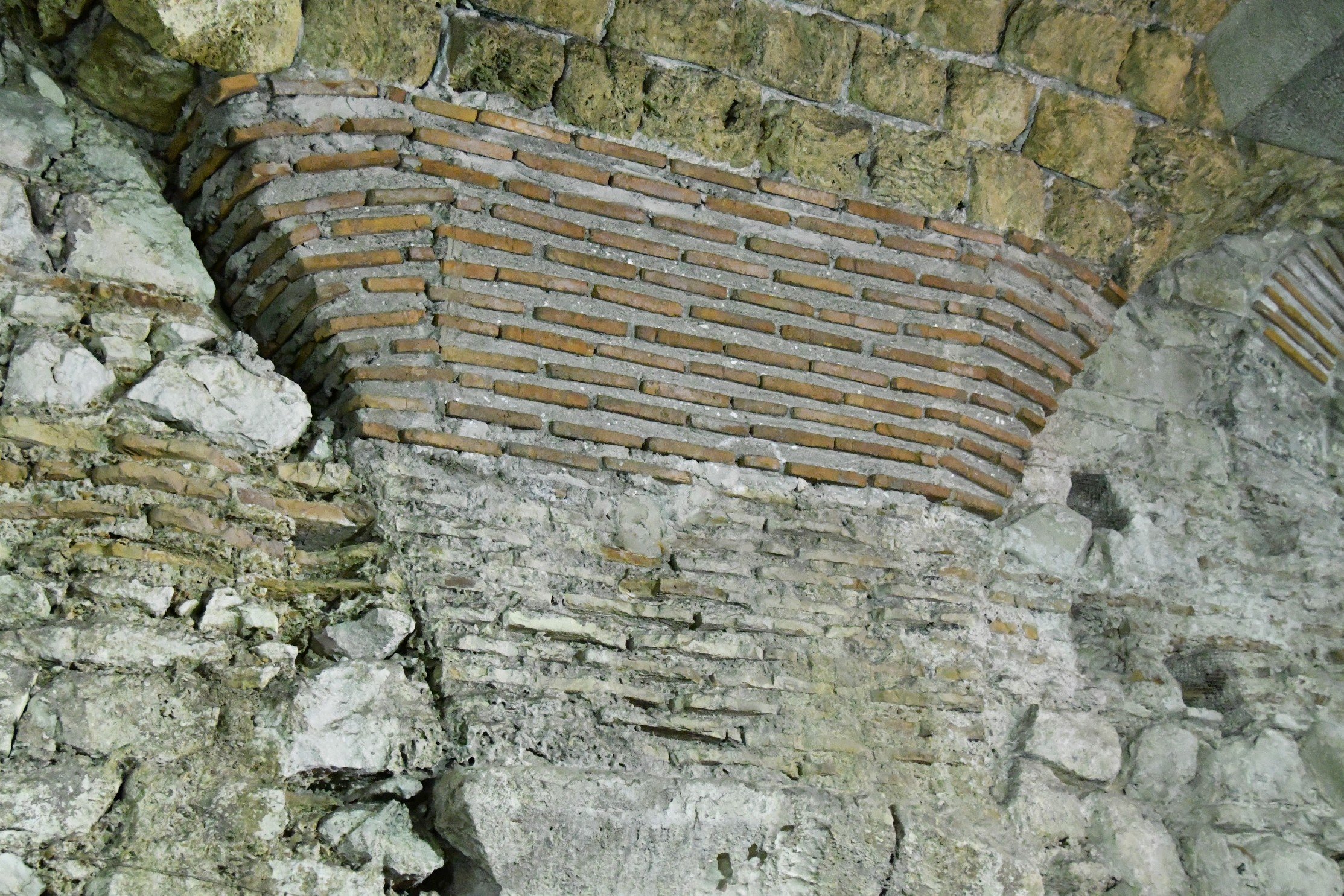 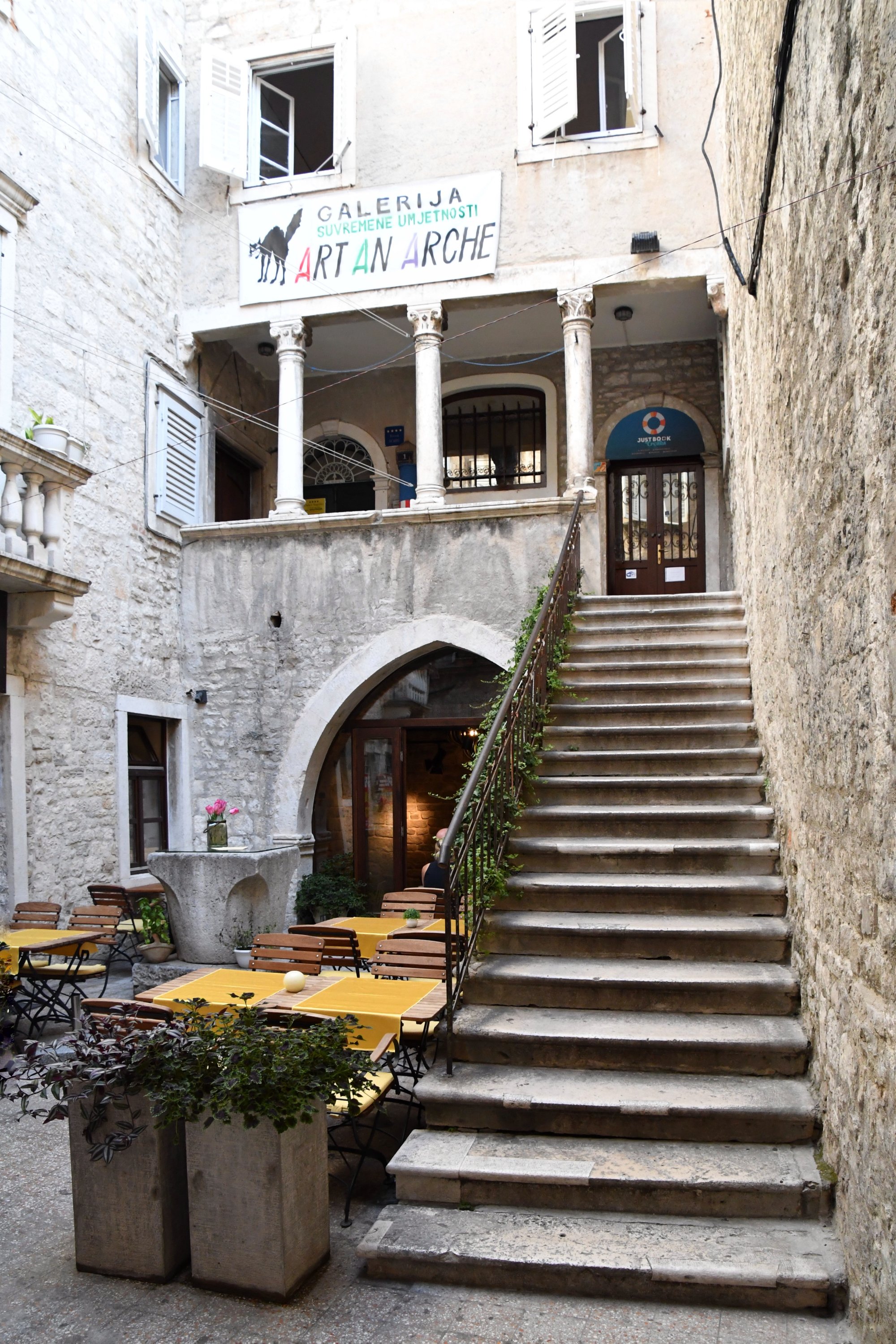 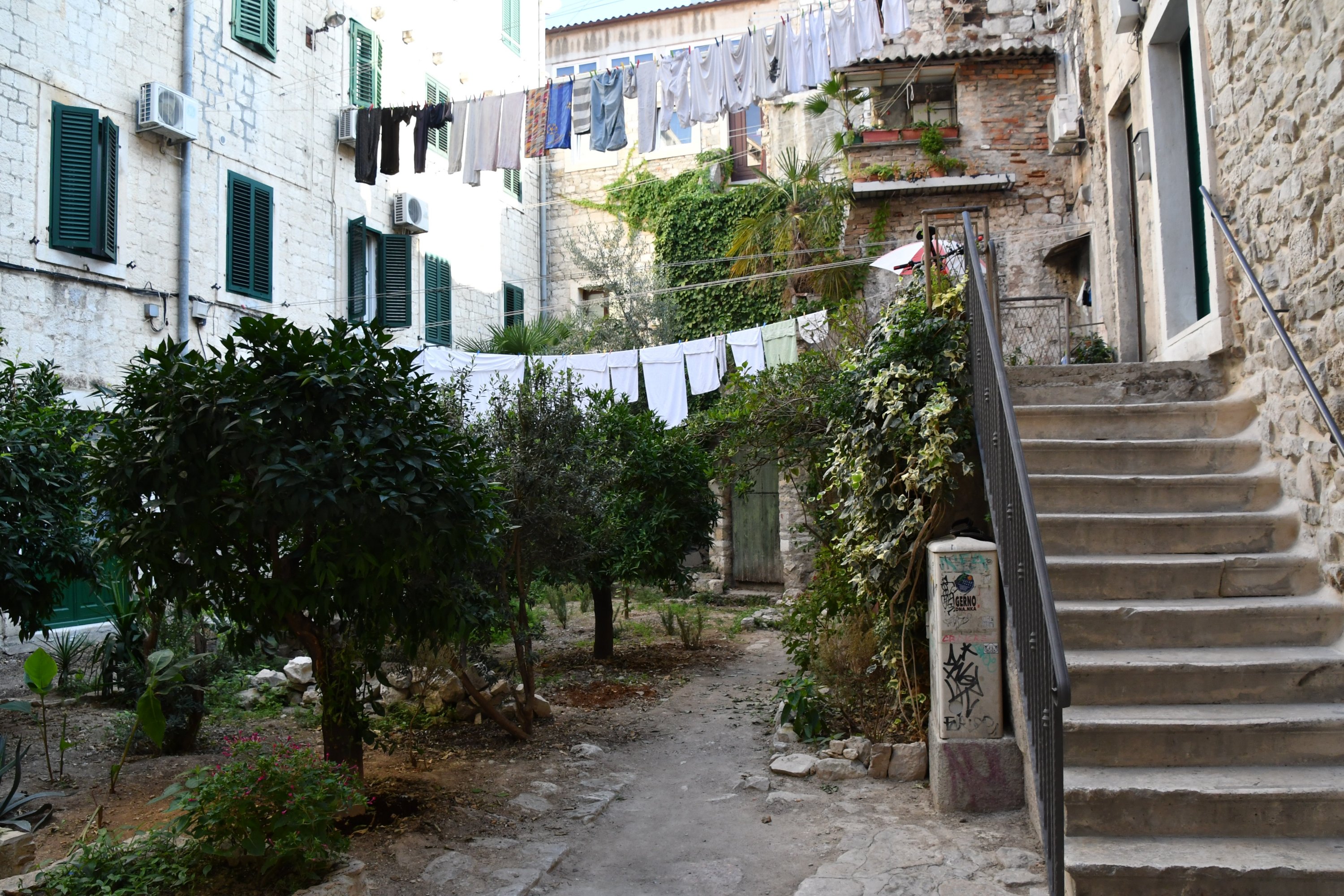 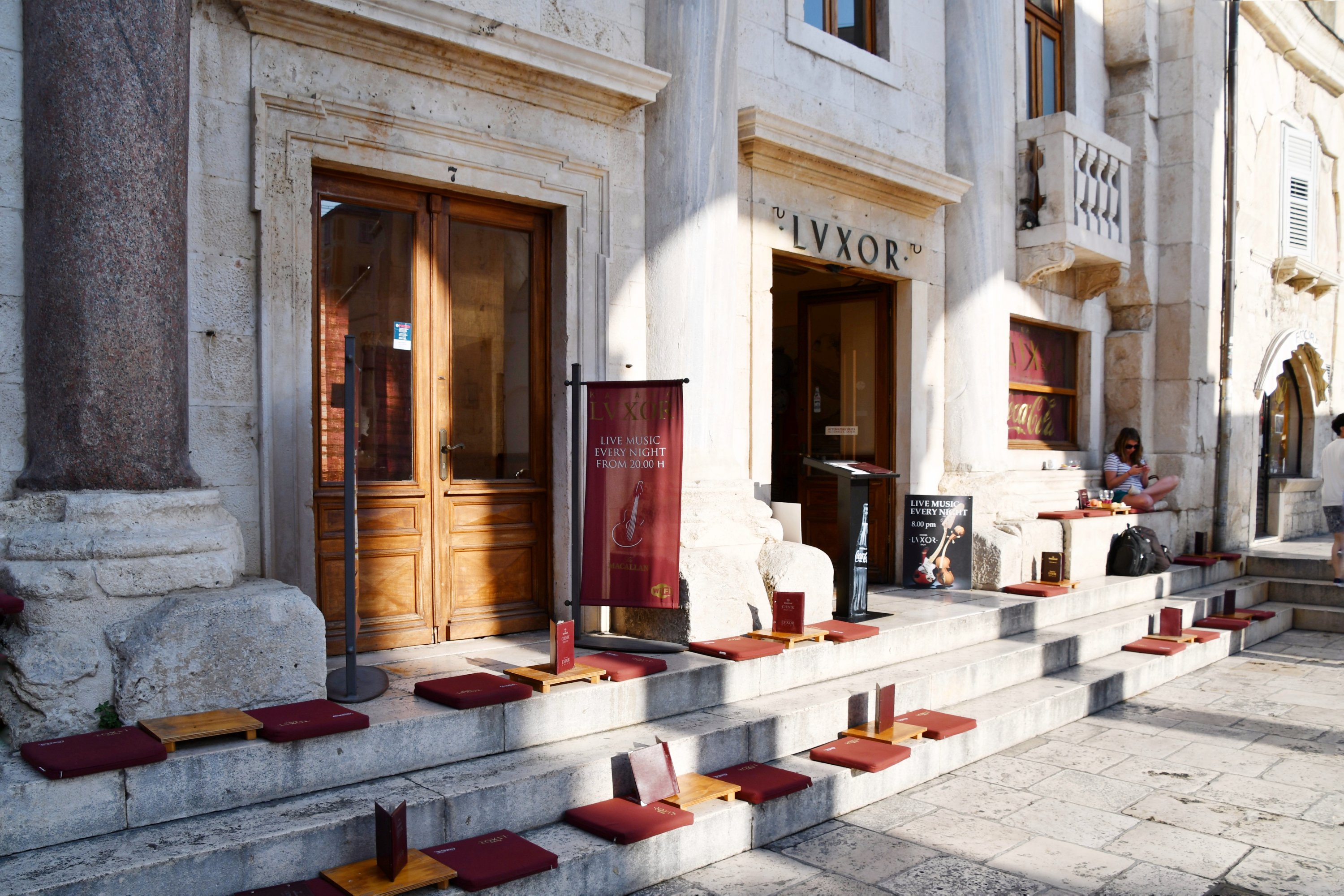 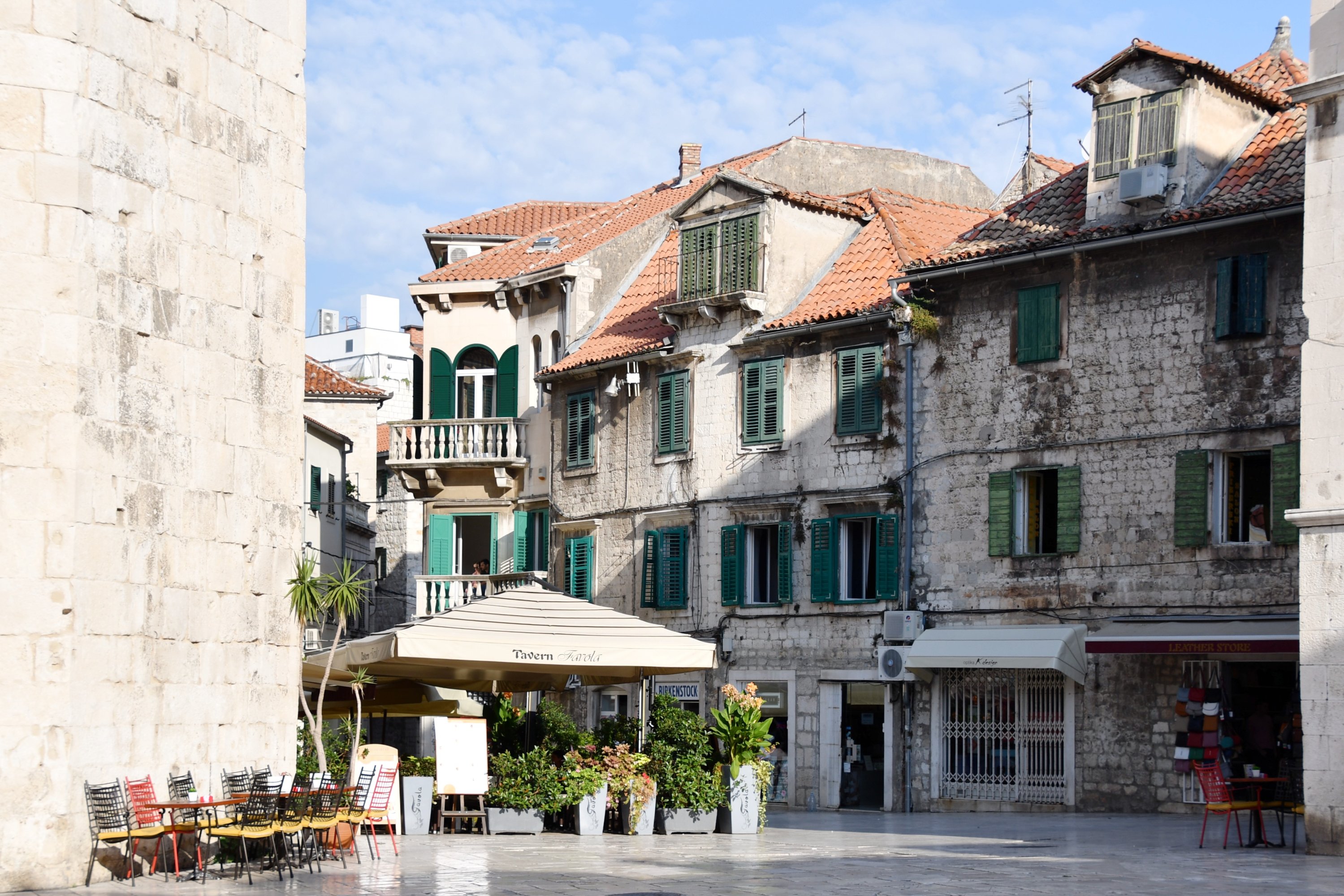 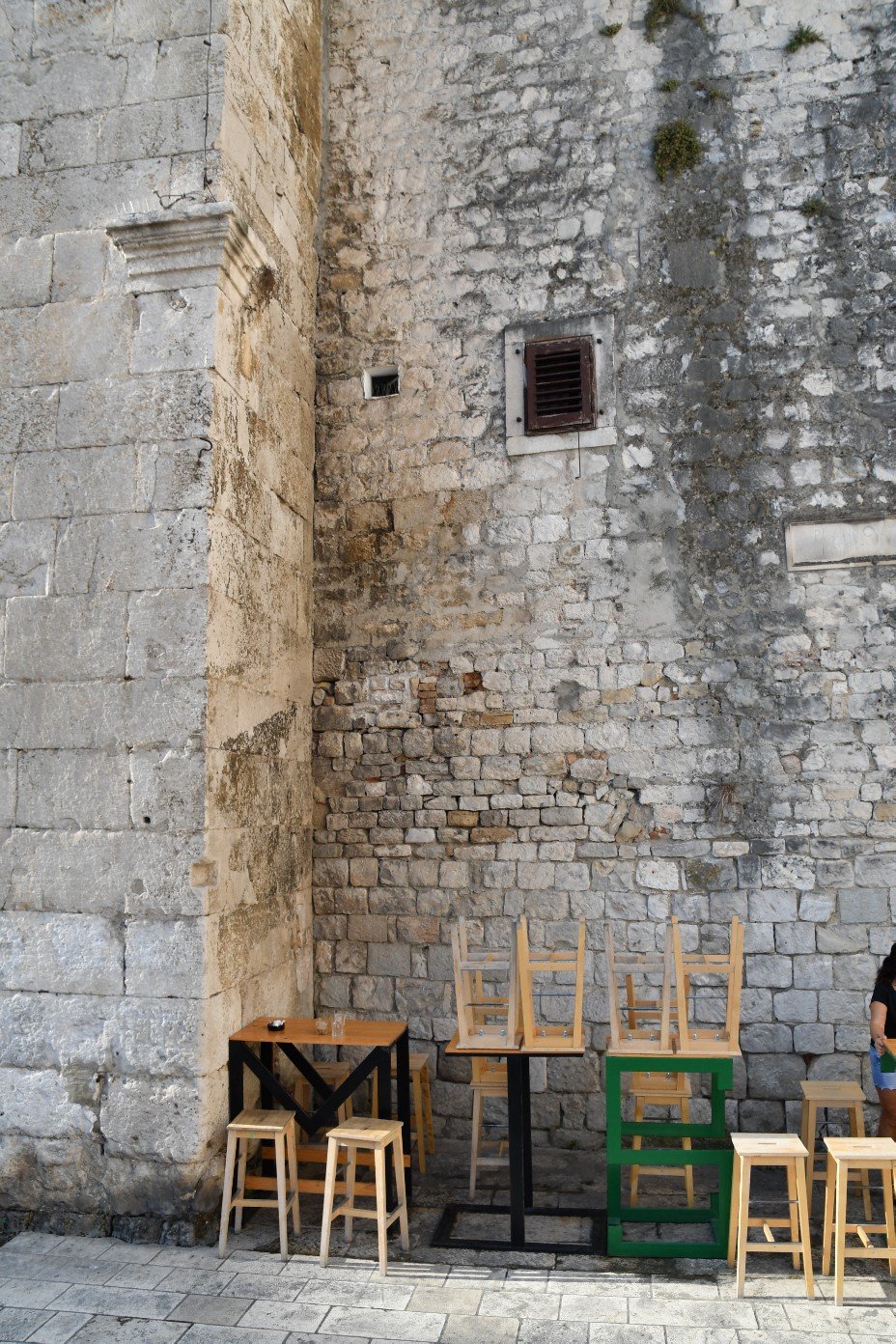 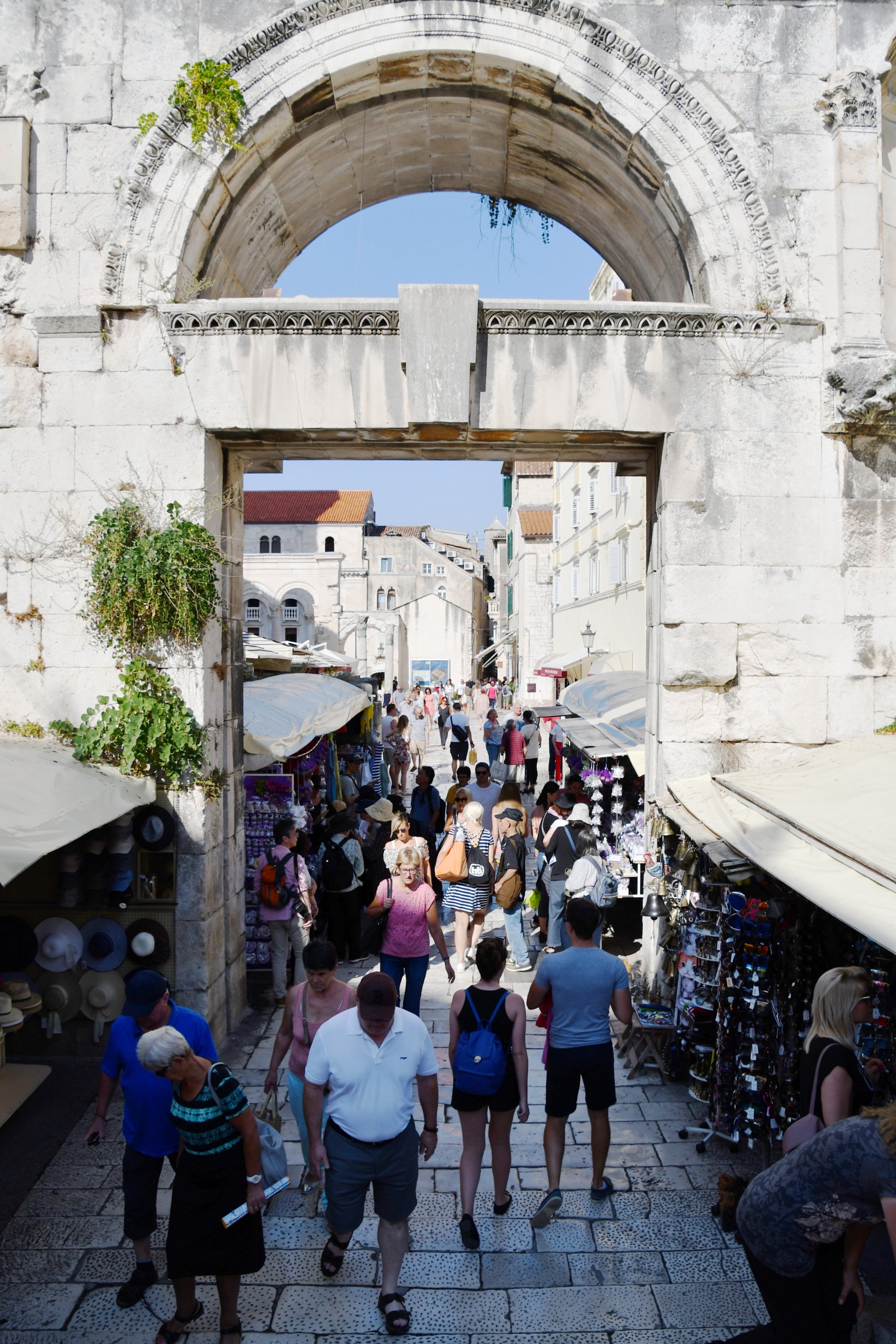 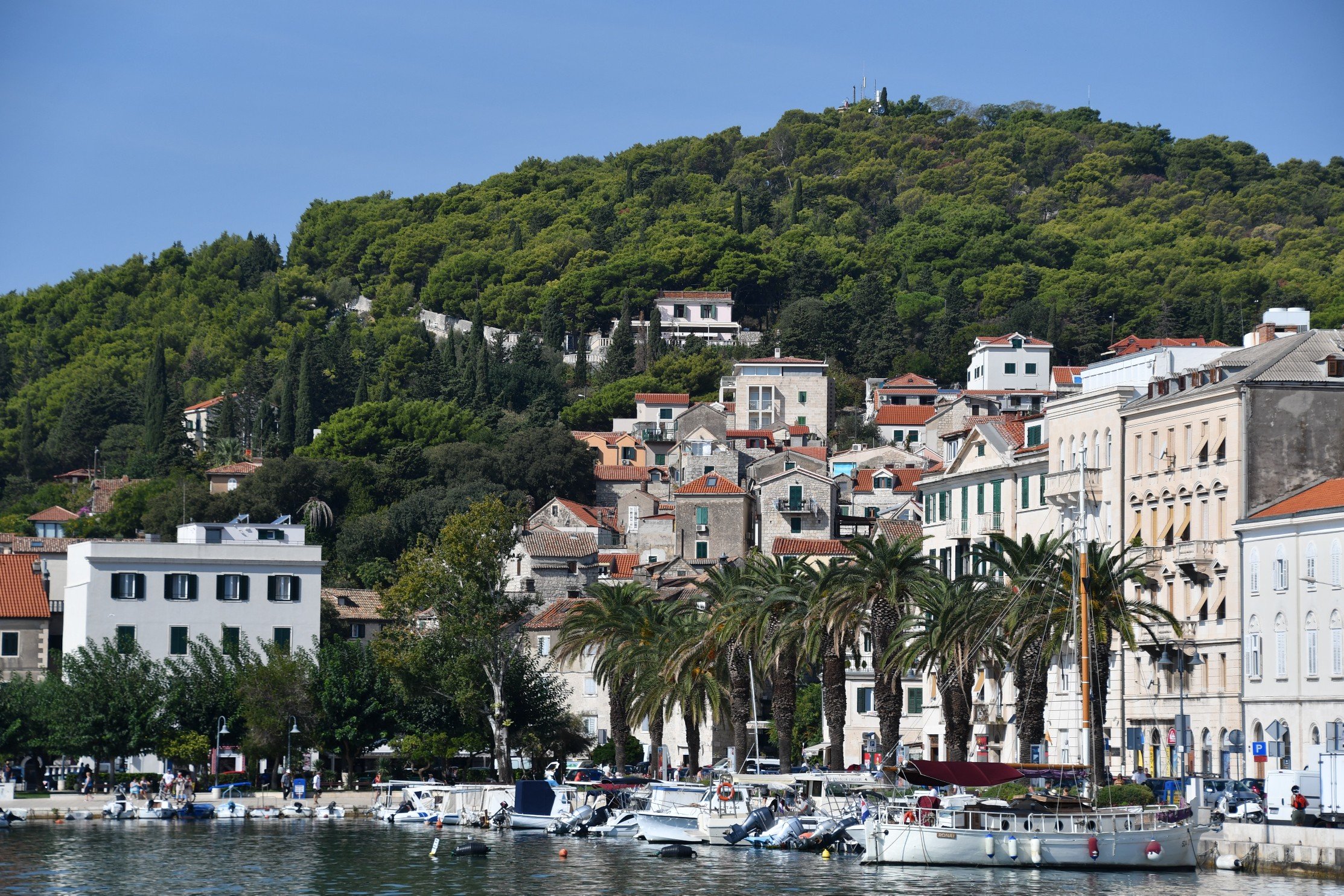 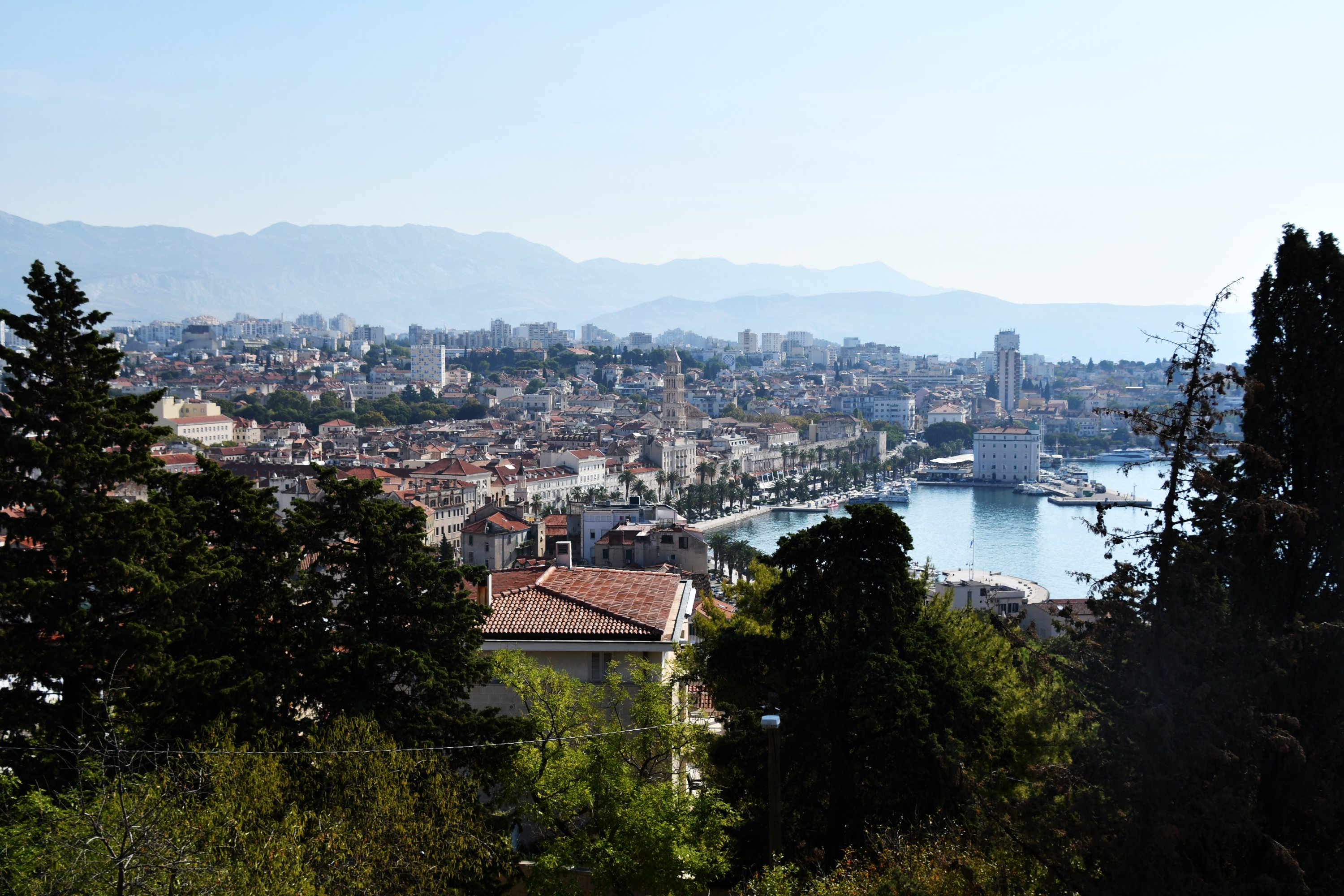 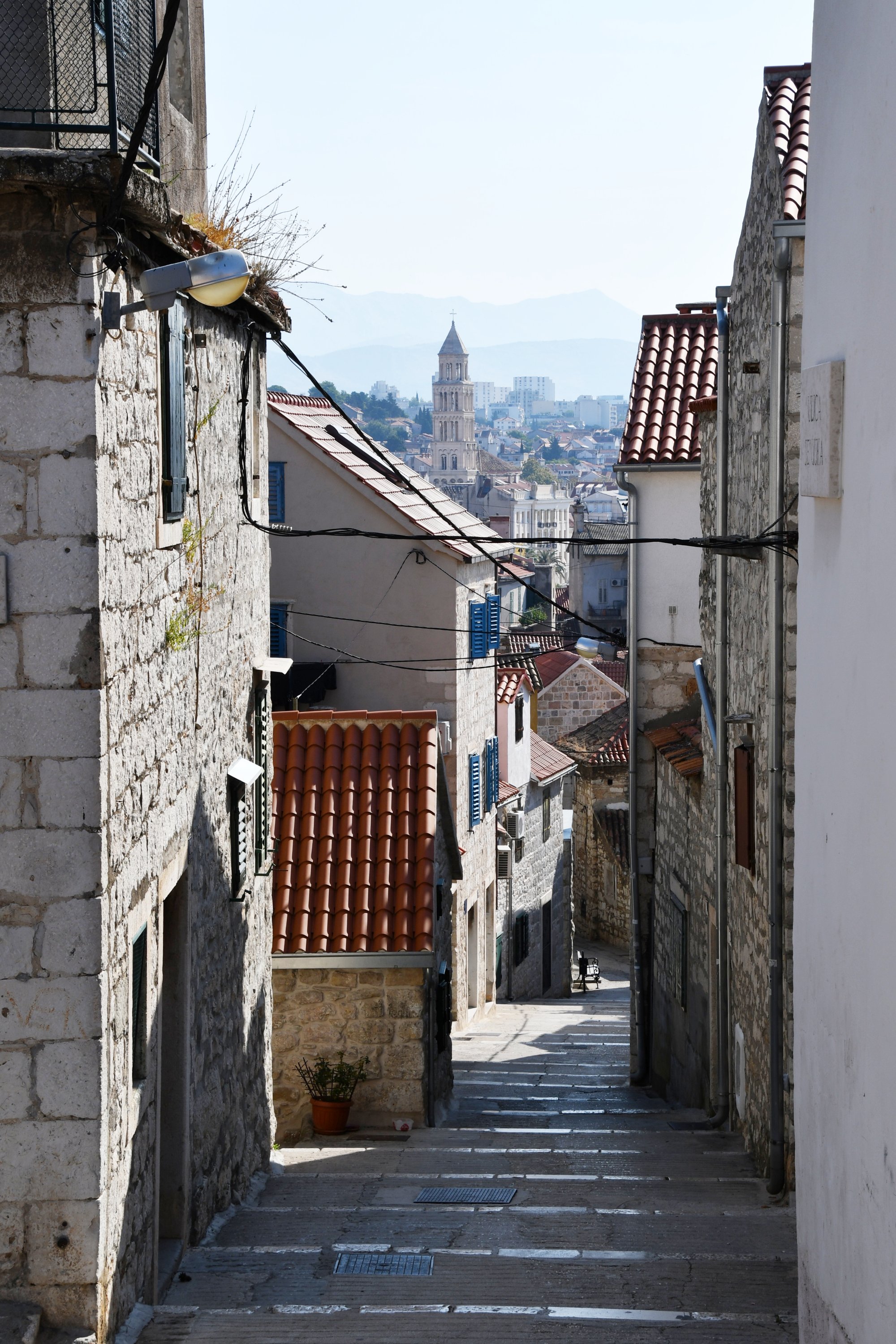