So, here we are at the half way point of an intensely enjoyable week. What could Wednesday bring, we wondered? “A mixed bag” was the answer.

The morning was spent on Floreana Island, at Punta Cormorant, which seemed a bit of a misnomer, as not a single cormorant was on offer. There were flamingoes; 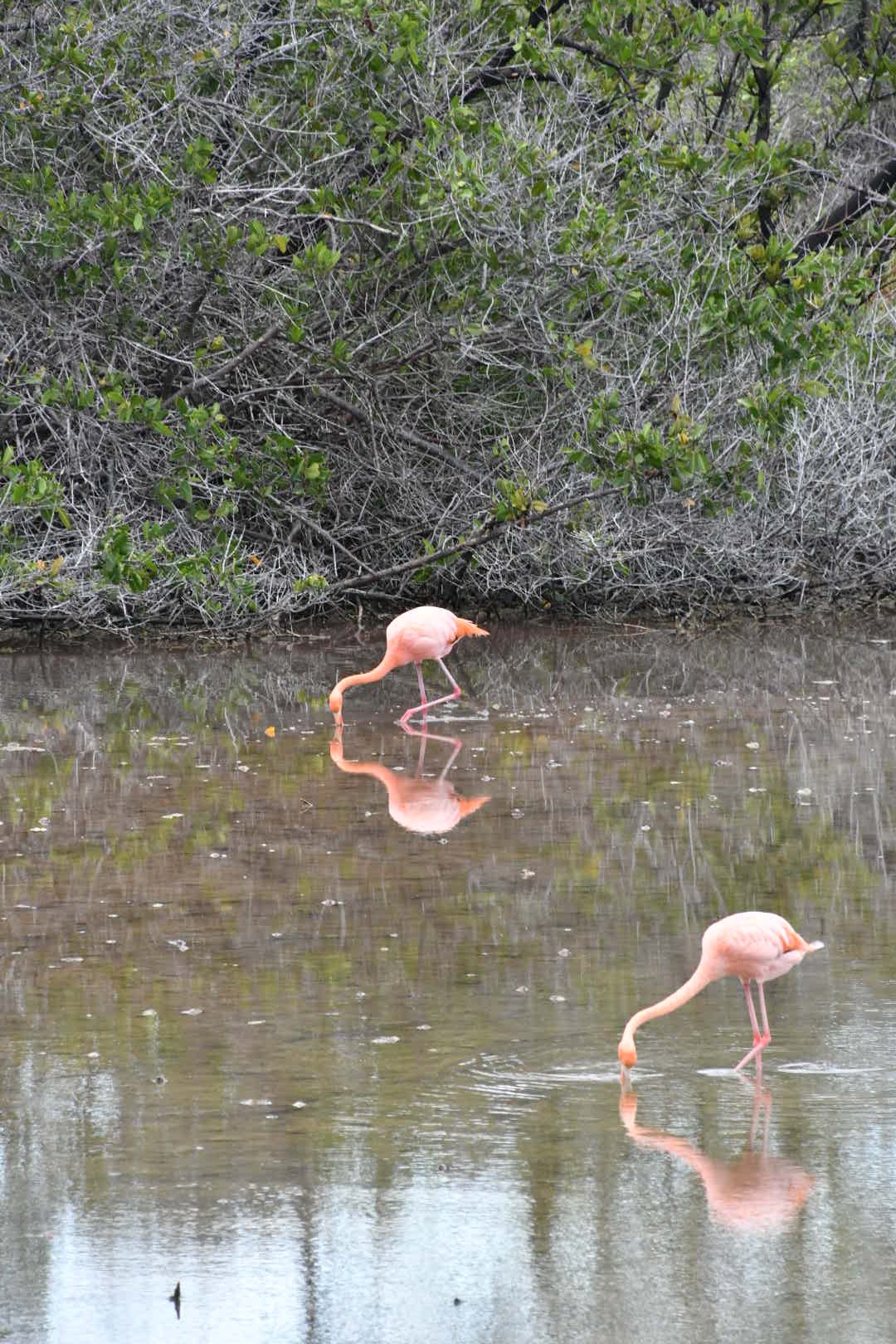 even including a juvenile (marked out by the lack of pink colouration); 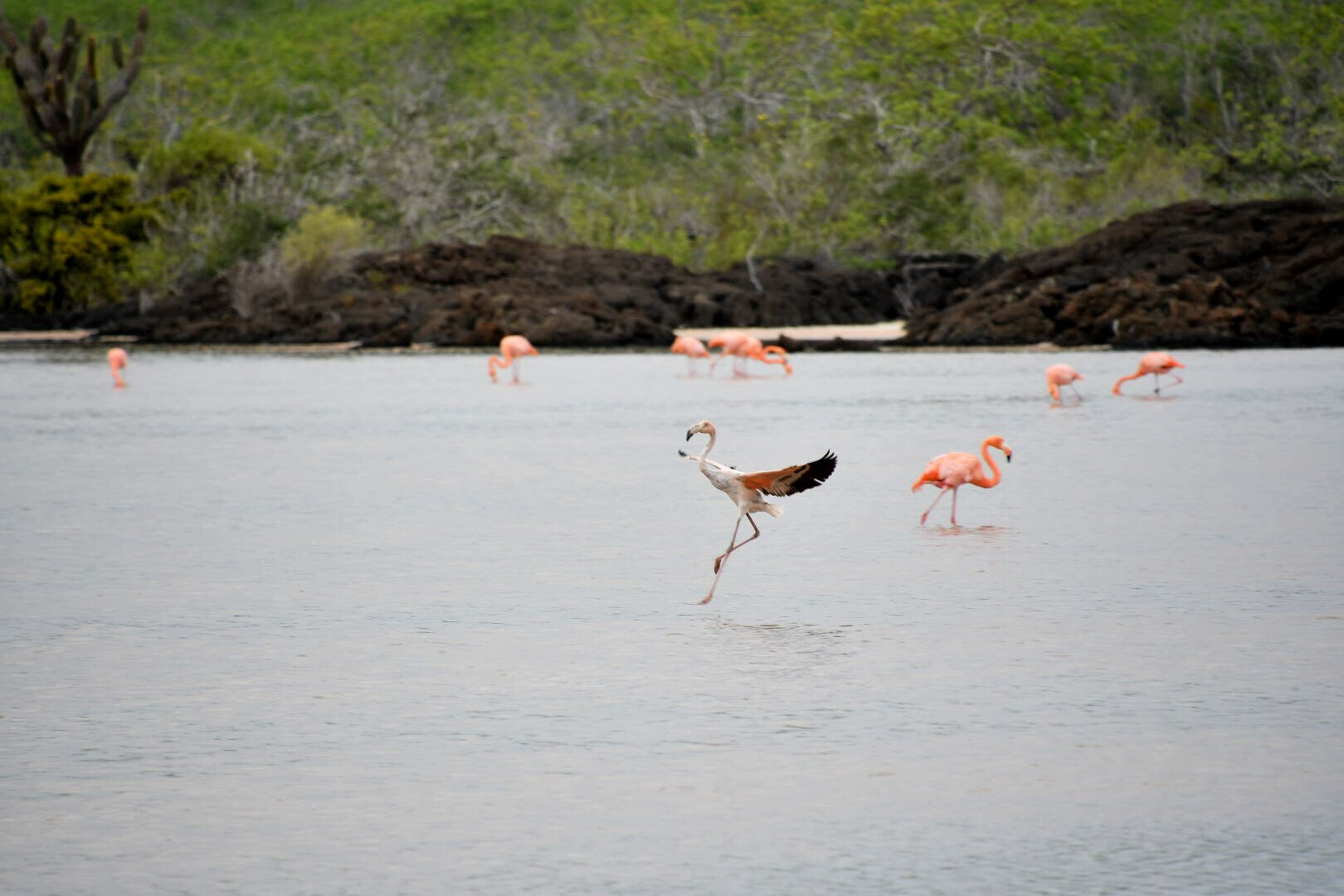 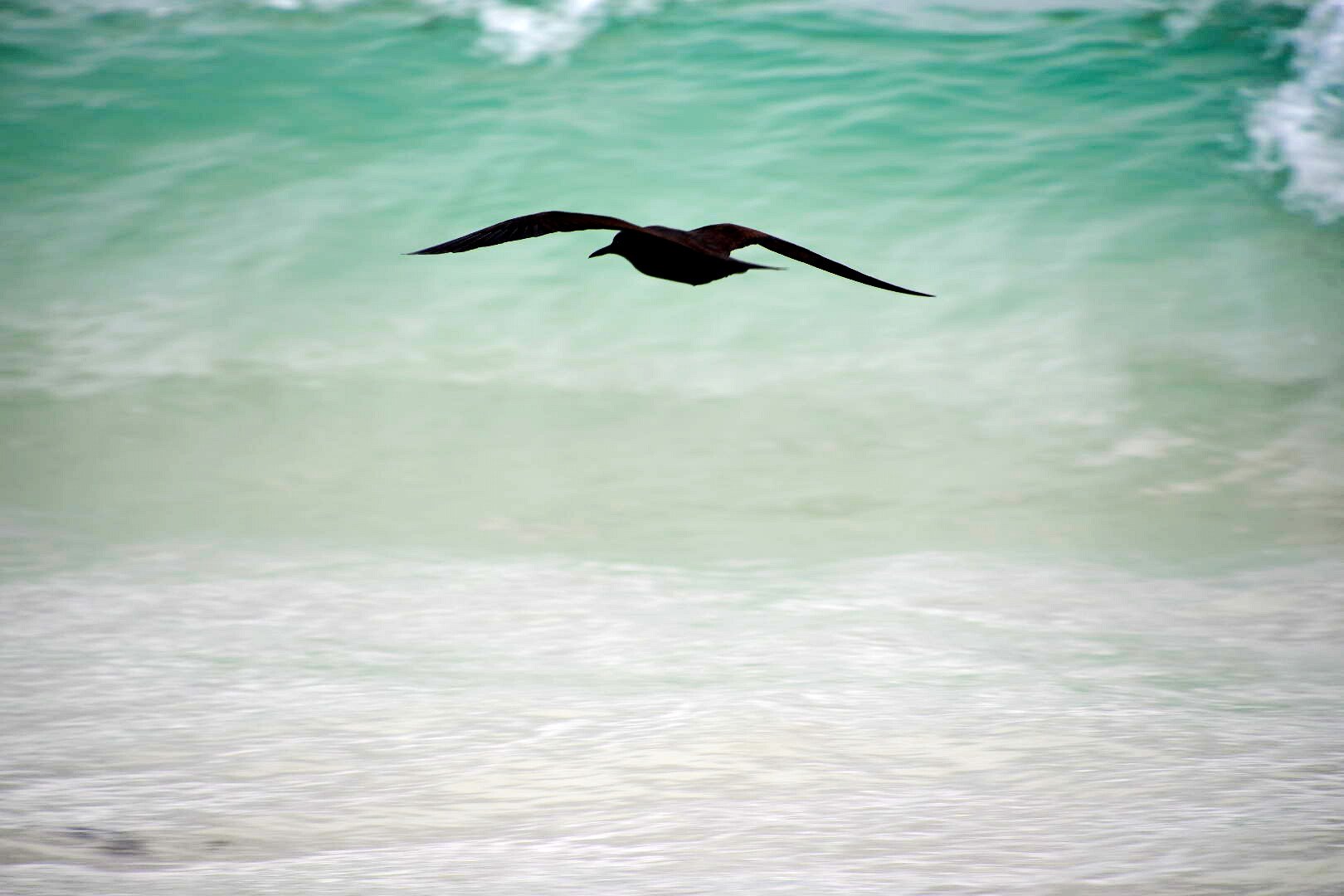 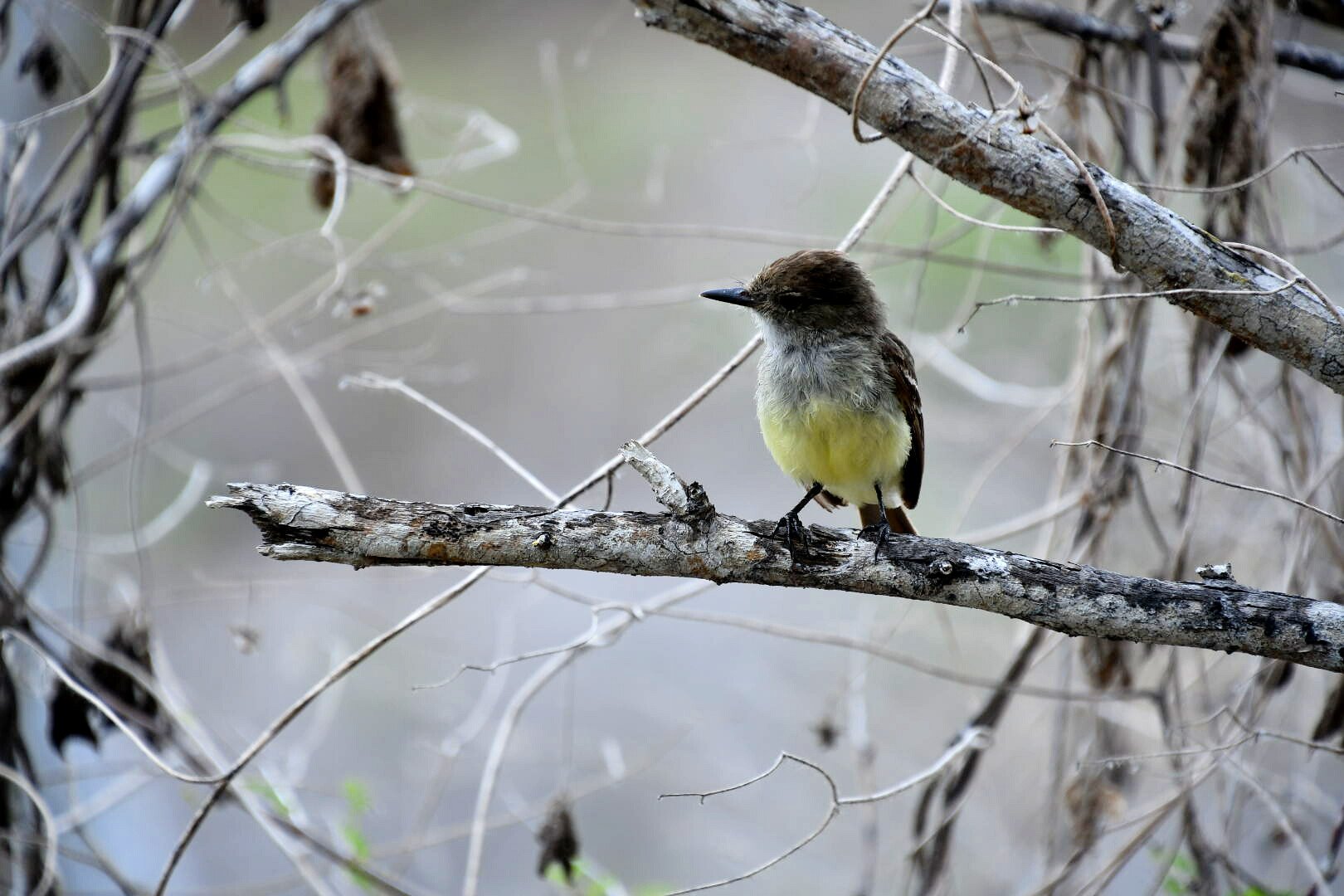 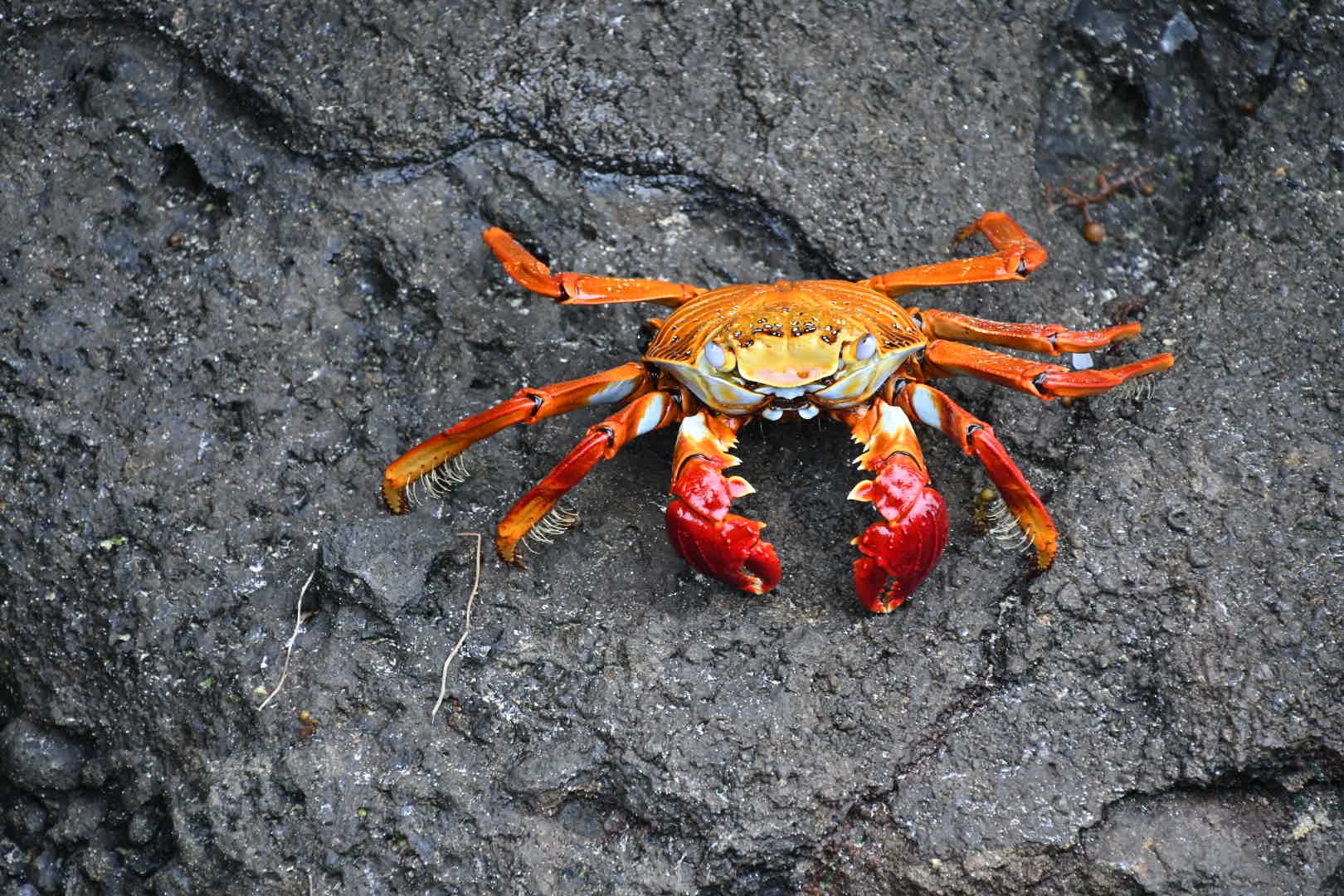 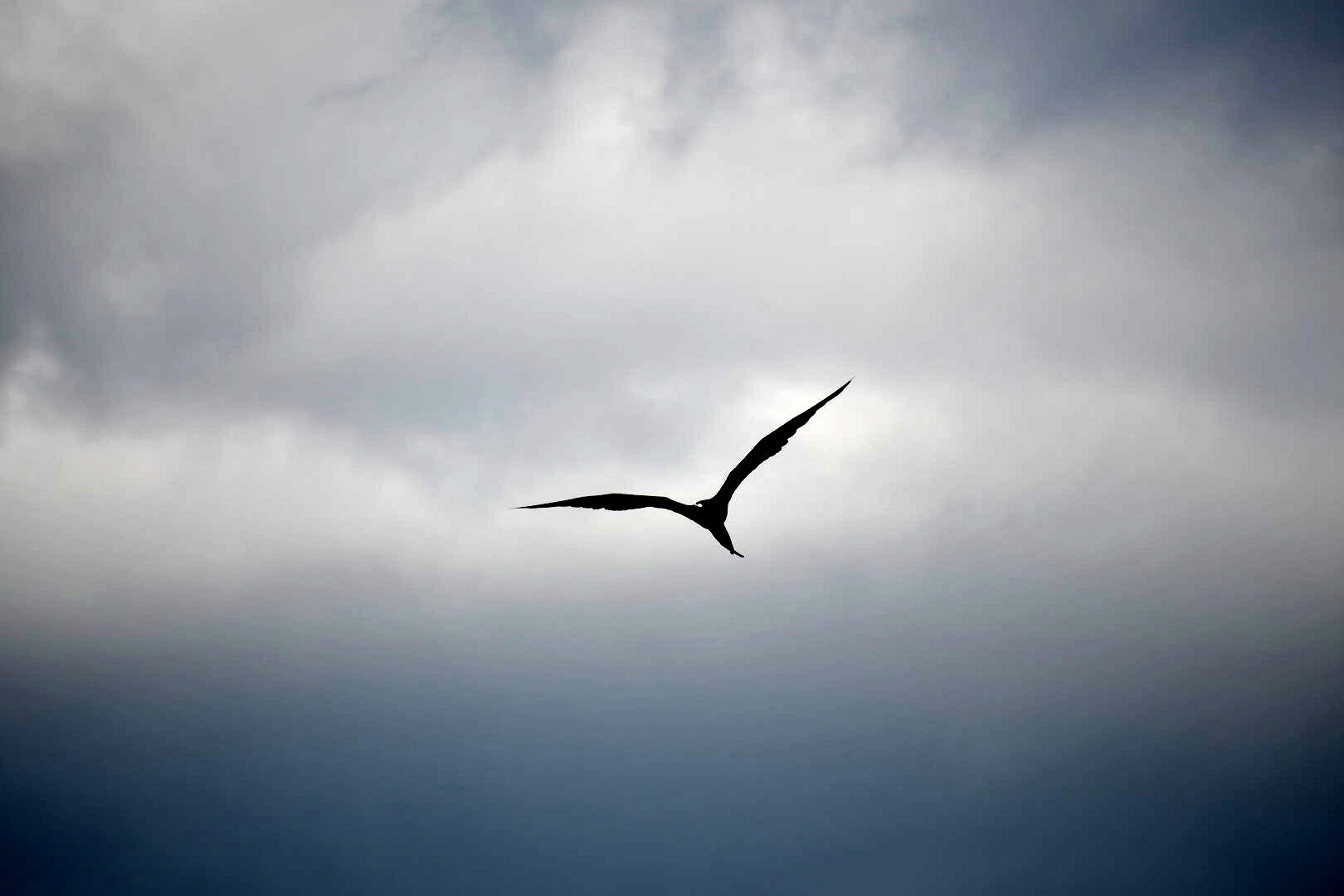 and, excitingly, Eagle Rays swimming near the beach. 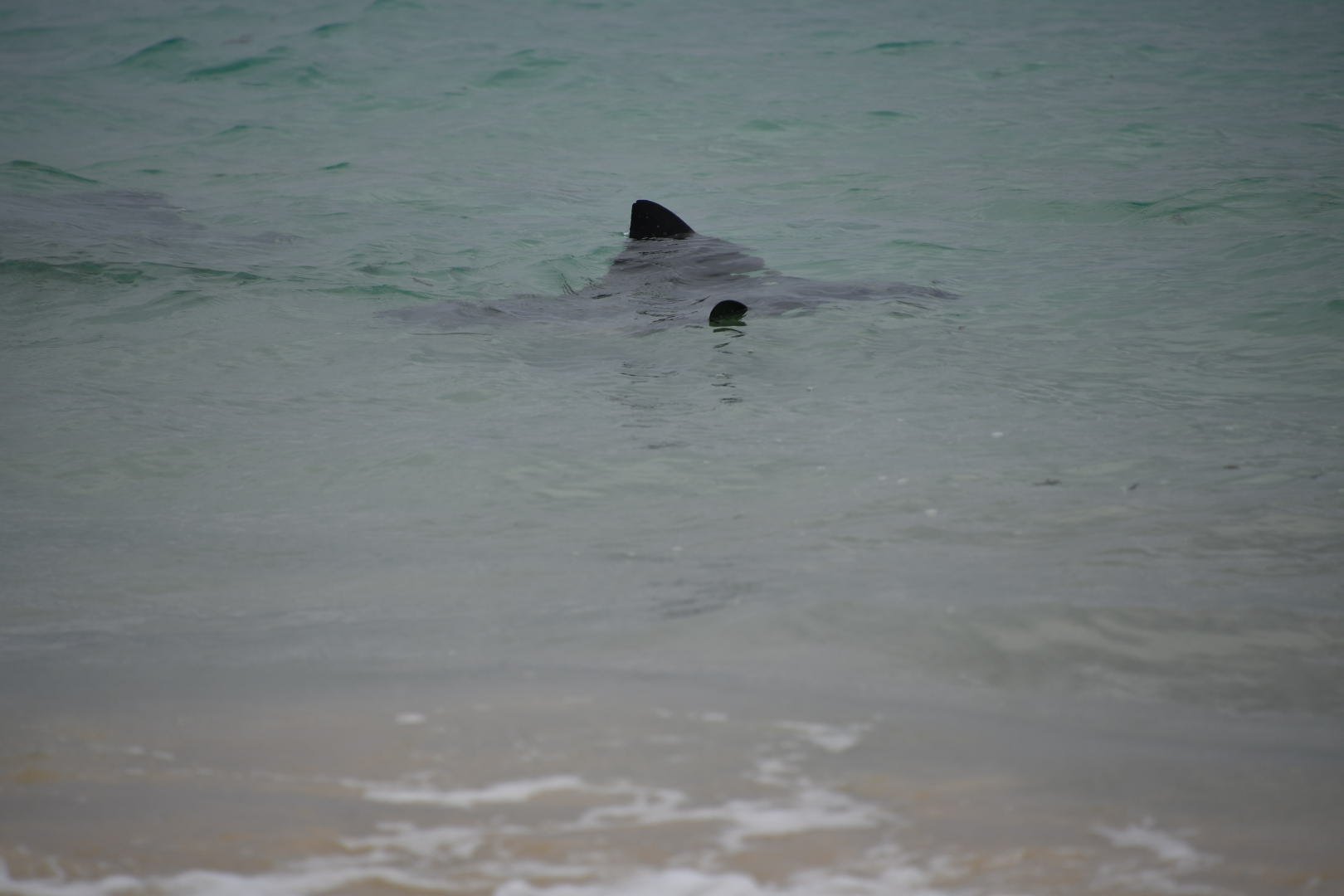 But not a single cormorant was on show – although there were some blue-footed boobies doing their fishing thang, which is not dissimilar to the cormorant’s diving style.

We were lucky to see the flamingoes – Jane and I visited the same place later on in the morning for a beach visit (which included an abortive attempt at snorkelling on my part which basically has put me off the idea for the rest of my life), and by that stage almost all of the flamingoes we’d seen earlier had vanished.

Later on that day we took a ride in one of the pangas (Zodiacs, RIBs, whatever you like to call them), which enabled us to see that the marine iguanas on this island were bigger than those of Española (though much less colourful). 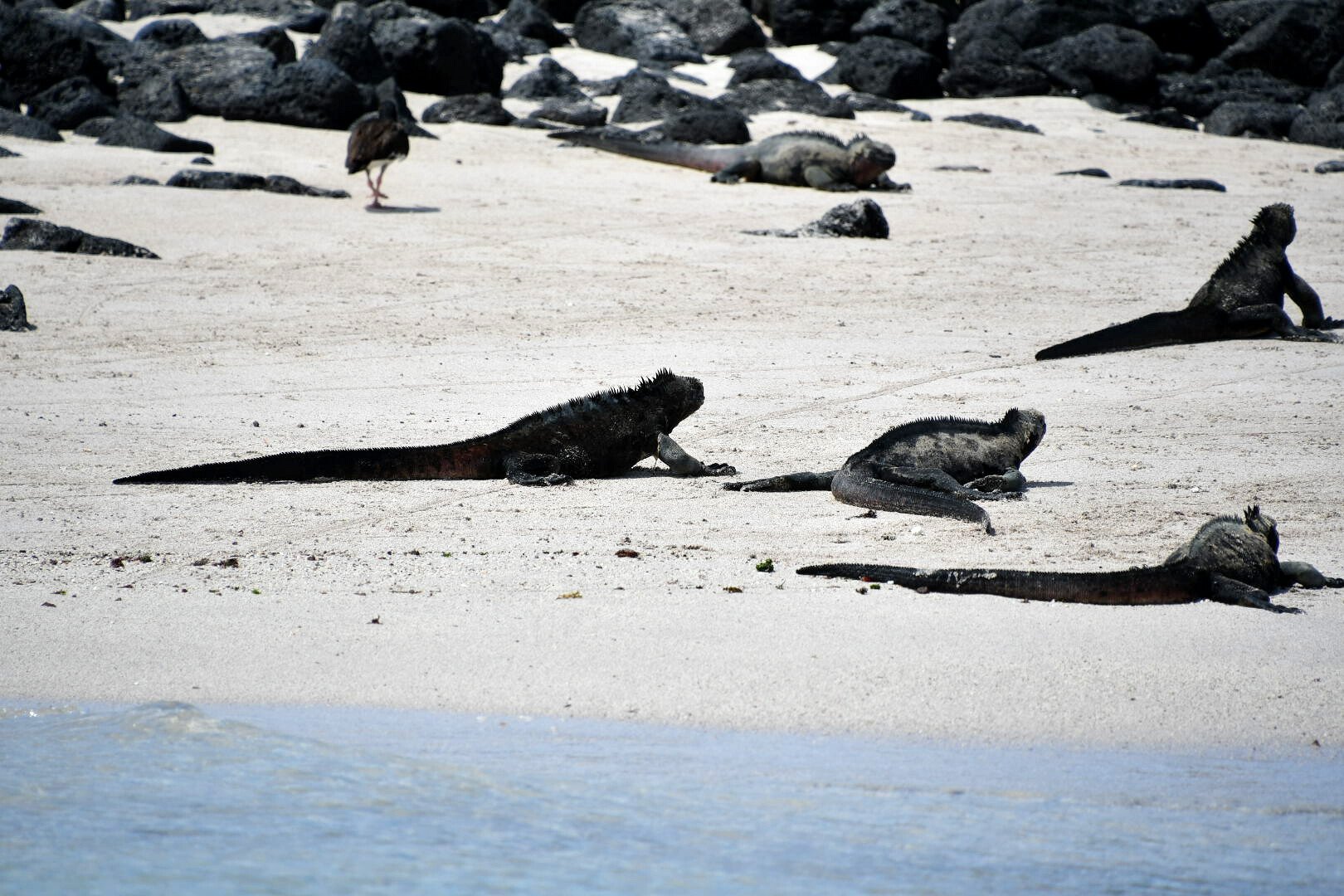 The bird you can see walking among them is an American Oyster Catcher. 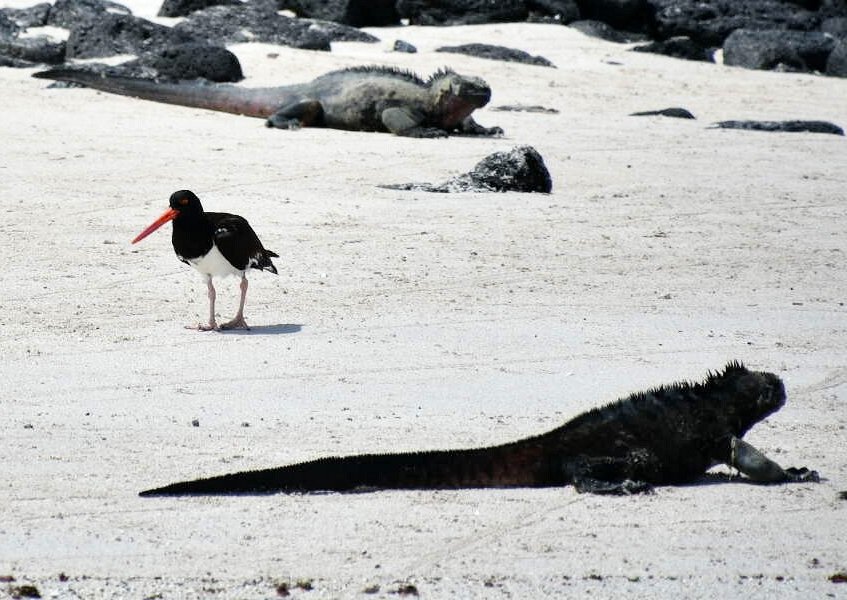 On the panga ride we saw rays and sharks in the water, and also some turtles, which occasionally came up for air (although apparently they can stay submerged for up to four hours, slowing their heart beat to around one beat per minute, down from the usual frenetic pulse of seven or eight). 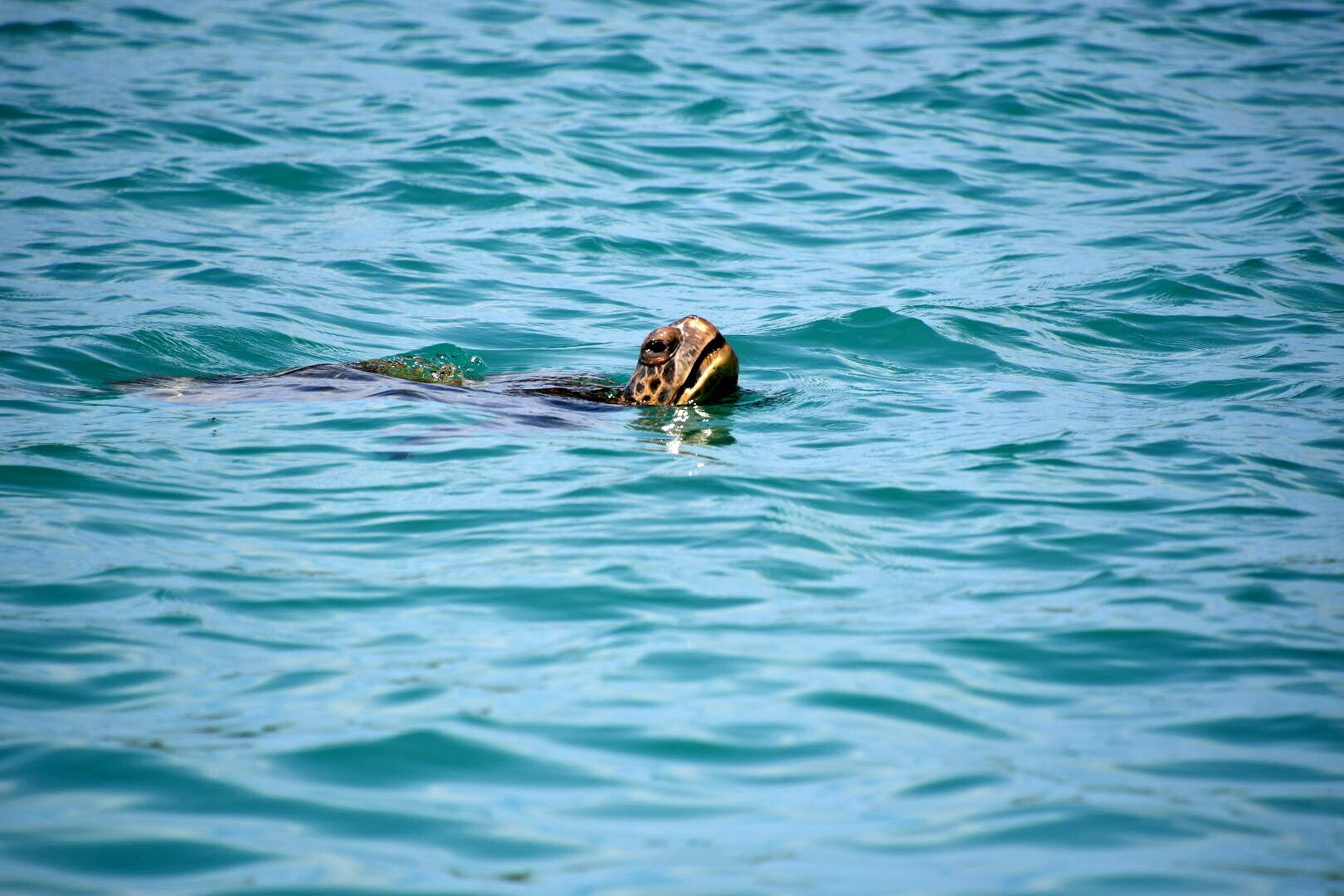 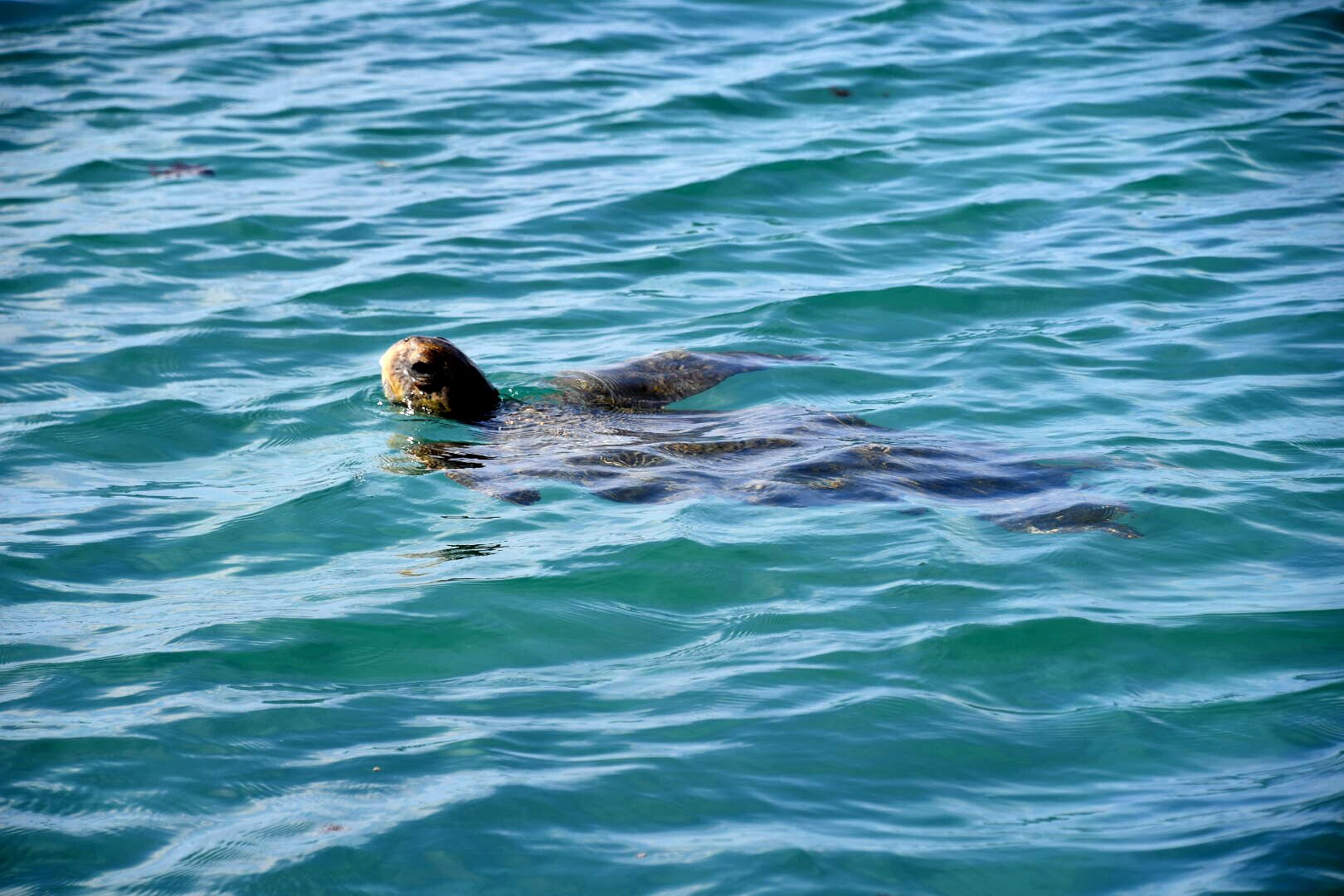 The most dramatic photo opportunity came as we headed back to the ship, as it became clear that there was a pod of dolphins in the area, and they wanted to play. 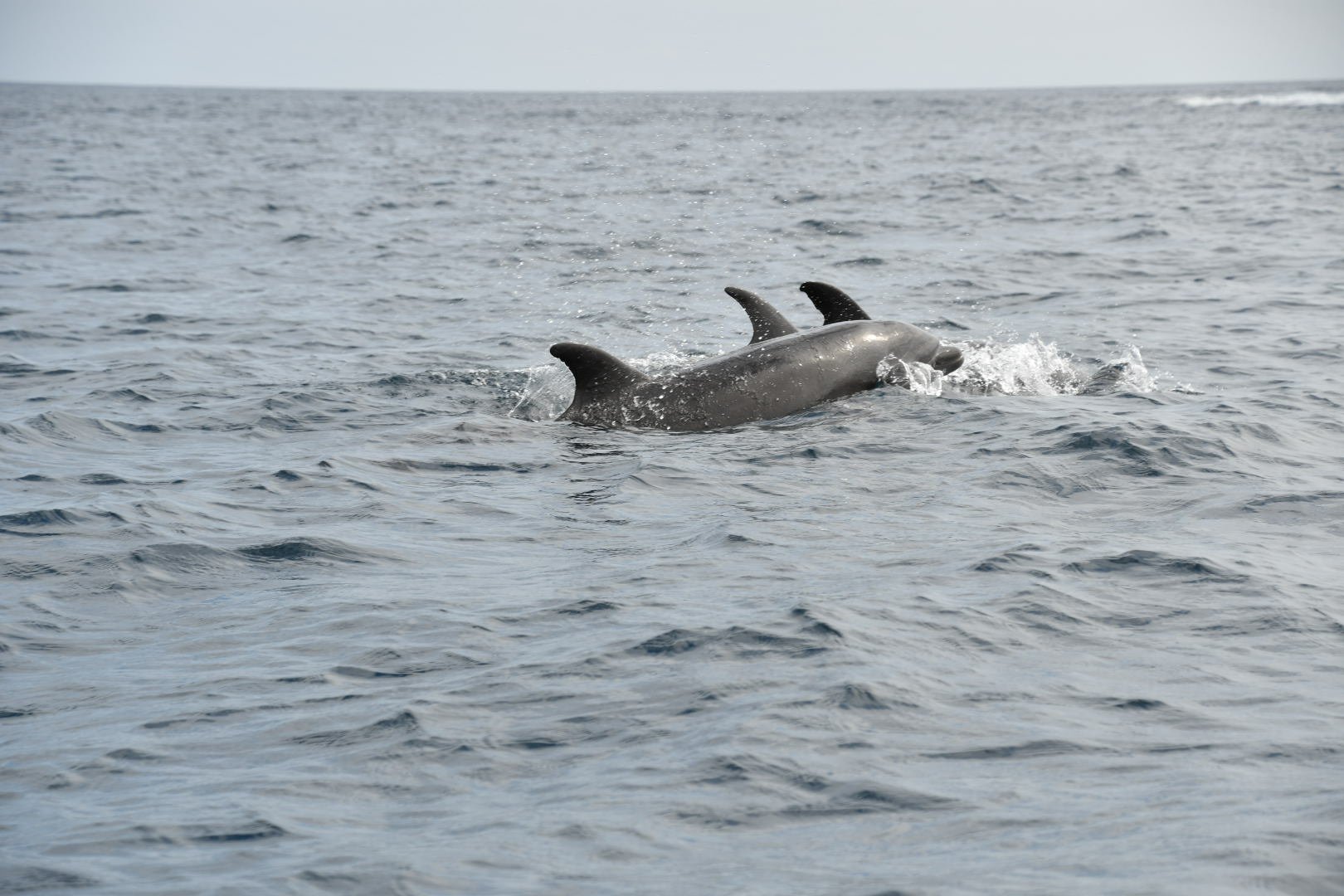 and, indeed, were in very exuberant mood! 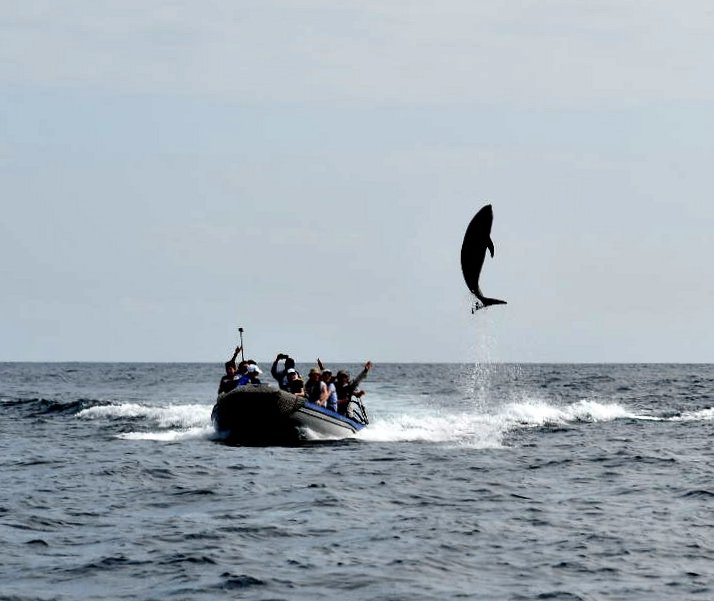 In the final part of the day, we visited another part of the island, called Post Office Bay, for the good reason that there is a post office there – of sorts. To be precise, it’s exactly the same sort of post office that can be found in Patagonia, at Wulaia Bay; a barrel where you put your postcard after you’ve taken a look at the cards already there to see if any are addressed to someone living near you, or in an area you plan to visit. So, a reliable delivery mechanism it ain’t; an opportunity for serendipity it certainly is.

Here is Natasha, one of our guides, explaining the idea in front of the barrel 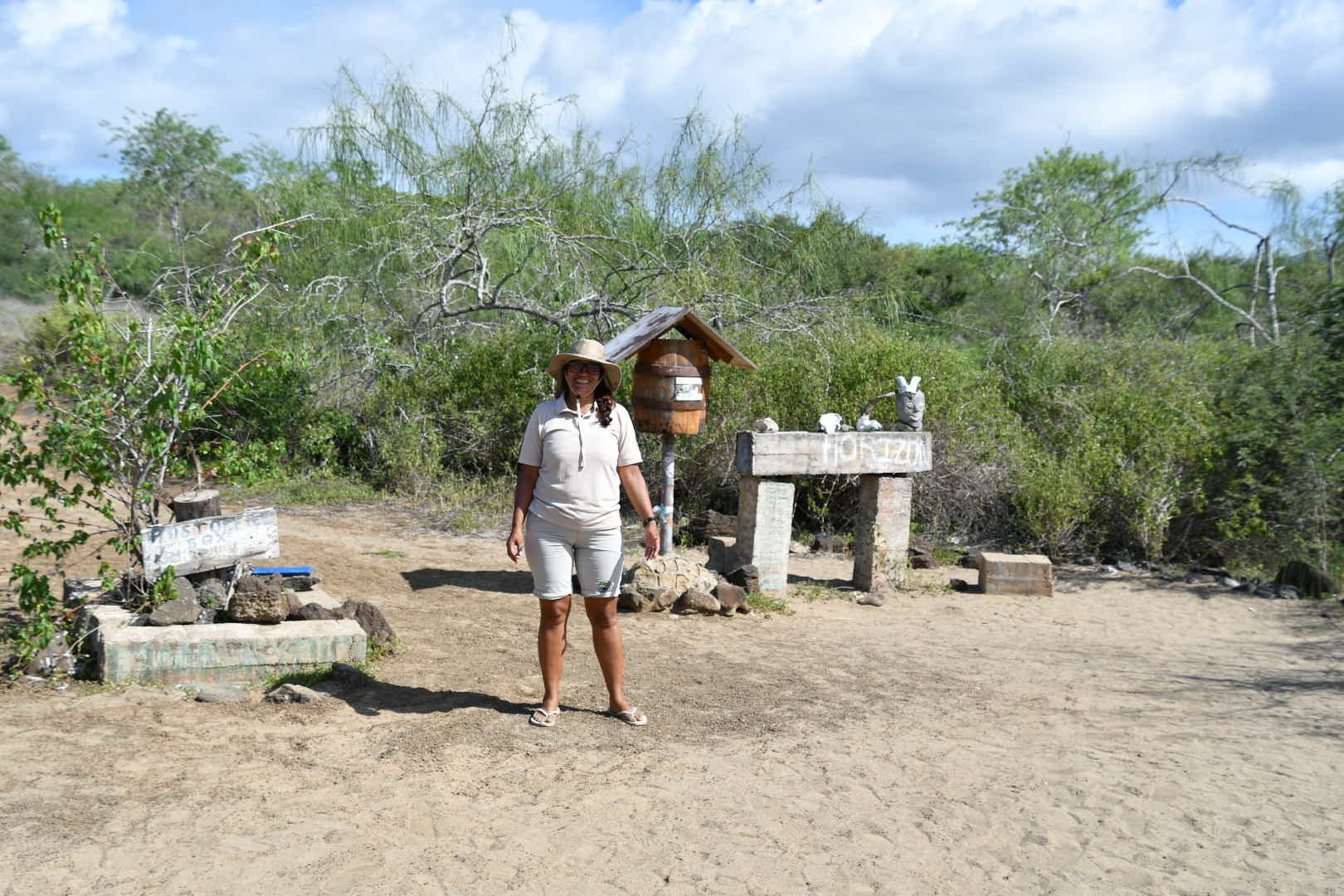 after which everyone had a go at finding a card to deliver (ours will be to Chalfont St. Giles). 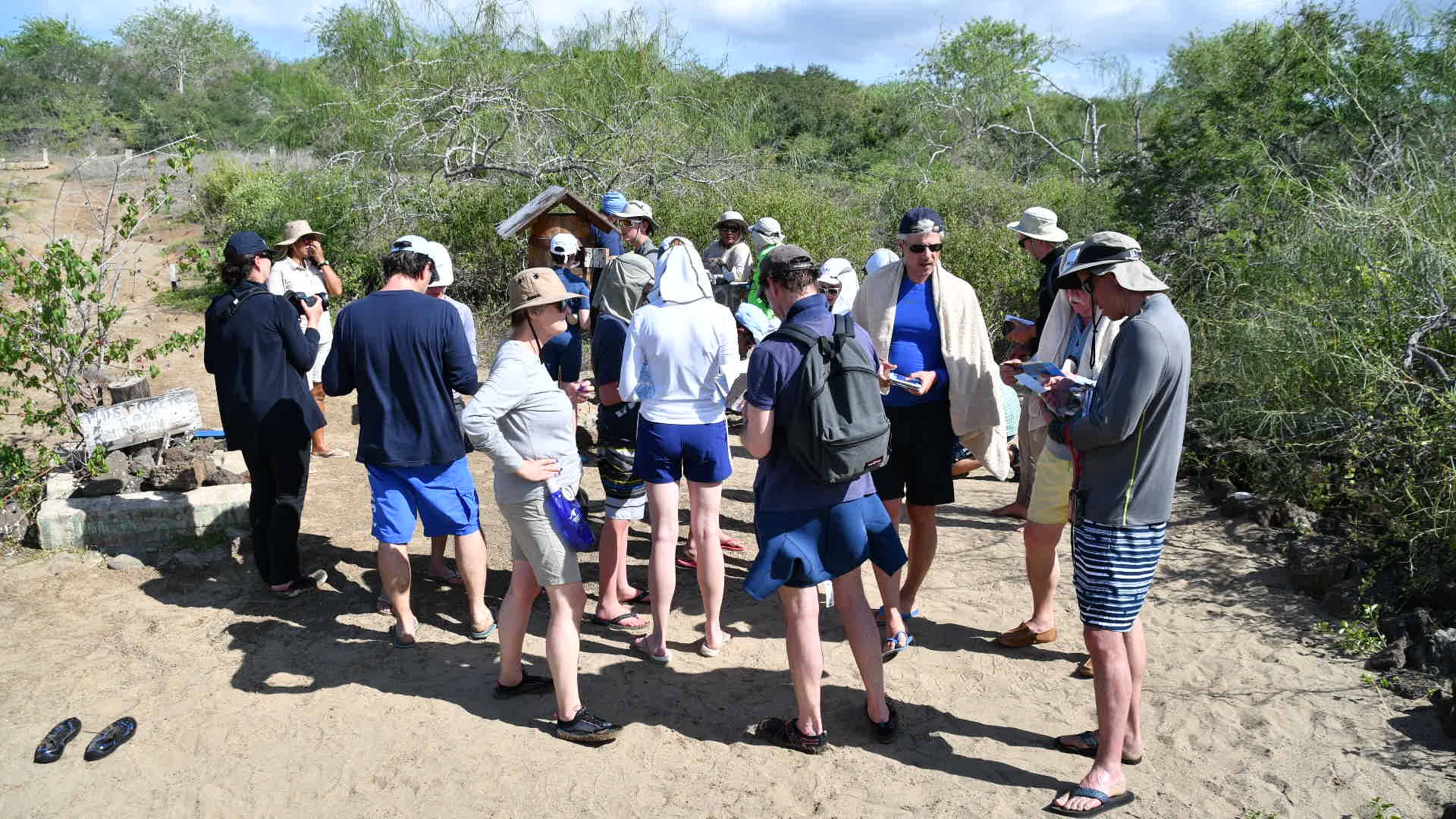 This was a busy, eventful day with many memorable moments. But the time with the pod of playful dolphins is one which everybody on the Origin saw, some got great underwater footage of and which was a highlight for everyone who was there that day.

To see the highlights of the next day (Day 5), click here.