September 20th. I billed the start time of today as “relaxed” – 0830 – but things still seemed to be a bit rushed as we went for a (rather sparse) hotel breakfast and then dashed about getting ready, including me trying to remember which bits I needed to take with me in order to whizz the drone up at lunchtime and discard anything excess in the backpack (we’d been told that there was about a 300m ascent which, in the context of the week, isn’t much, but – still….) and so I wanted to carry the minimum I could.

So I discarded a heavy DSLR and a fairly heavy video camera, thinking, “Hah! that’ll make the backpack lighter!” However, there appears to be a discontinuity in the laws of physics around my backpack, which stubbornly insisted on being exactly as heavy as it had been all week with those things in it. Go figure.

Ominously, on this morning, we were transported by a pair of LandRovers instead of our usual comfy tour bus MPVs. Everything seemed OK for a few kilometres as we followed a (much more comfortable-looking) Mercedes people carrier and a couple of pickups up an (admittedly steep) road. I was beginning to think that the LandRovers were just theatre when all of a sudden we swung off a perfectly good road on to a narrow and rough gravel track – with passing places and potholes. Despite the best efforts of the lad driving our LandRover, all my teeth were just about still in place by the time we stopped and got out to start on our walk. 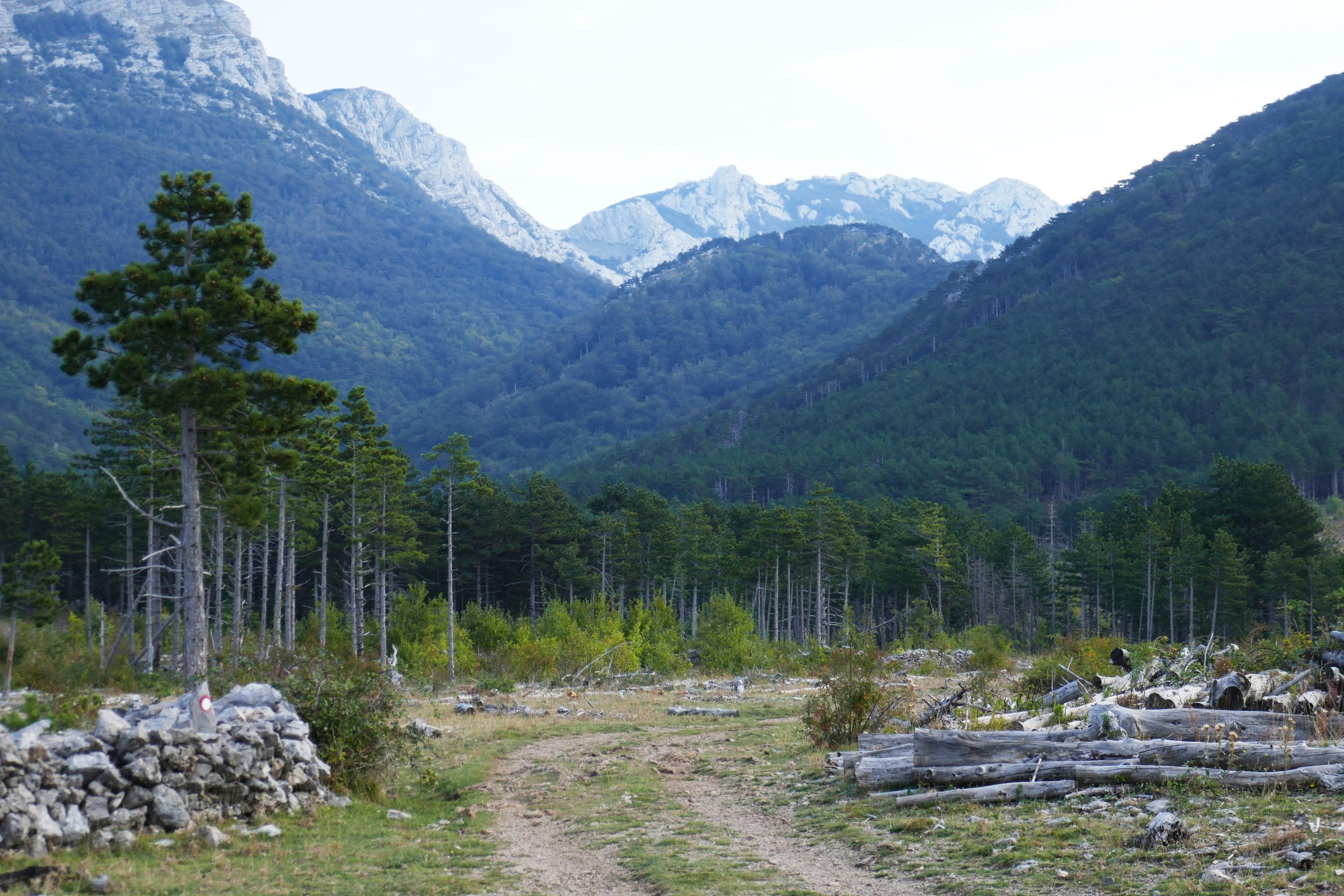 (in the photo above, you can see our high point – the lefter of the two saddles in the mountainsides).

So we started out, and entered – bliss! – shade for the uphill part of the walk. 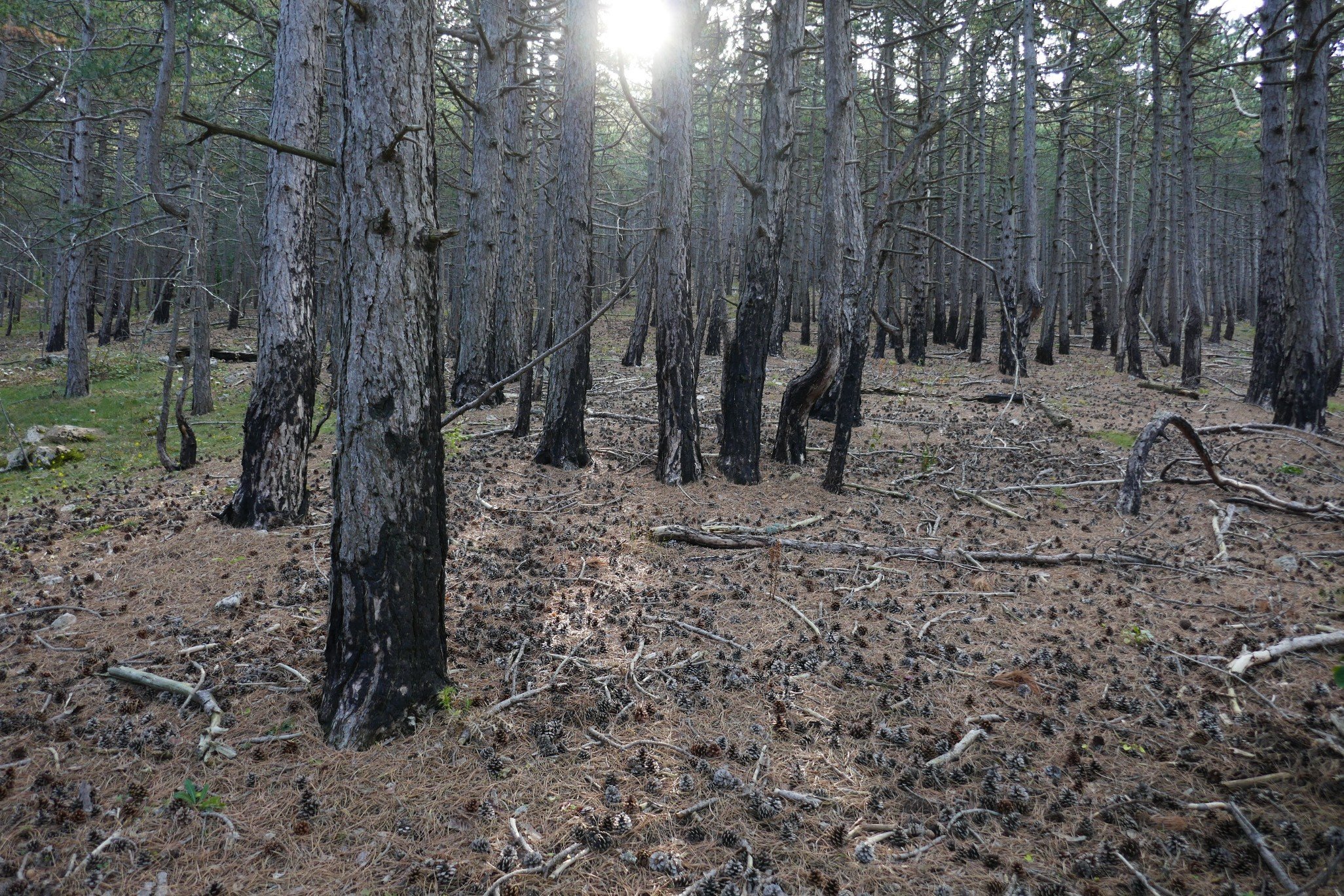 The trees in the photo above are showing that they suffered some damage in the forest fires of June 2017, but not enough to kill them – though the hillsode was littered with the corpses of pines that didn’t make it; trees just cut down to make them safe and then abandoned because noone could figure out what to do with the trunks.

The track wound up 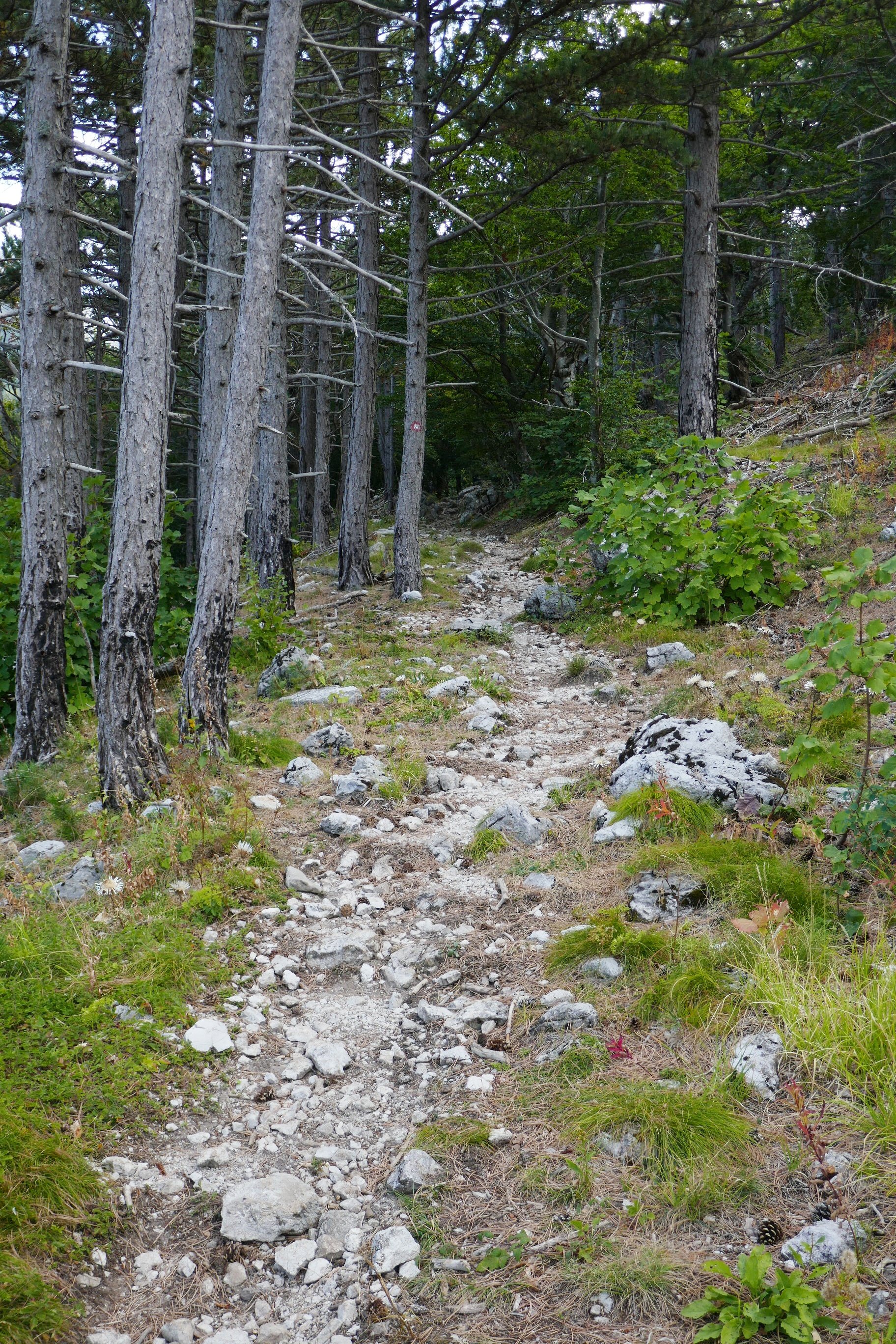 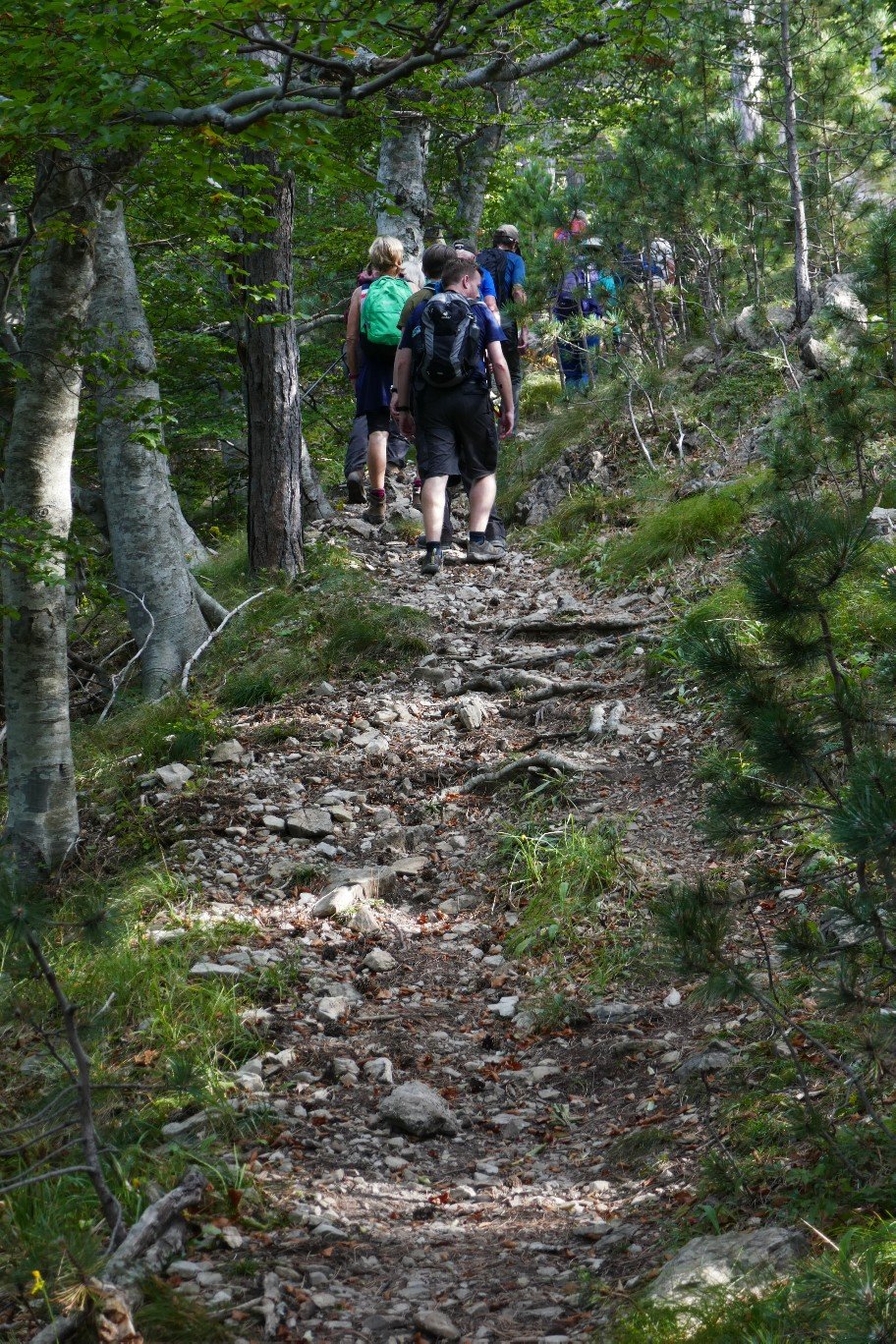 enabling me to establish my place in the order of things, which is firmly at the back of any group going uphill. Every so often there was a decent view on offer. 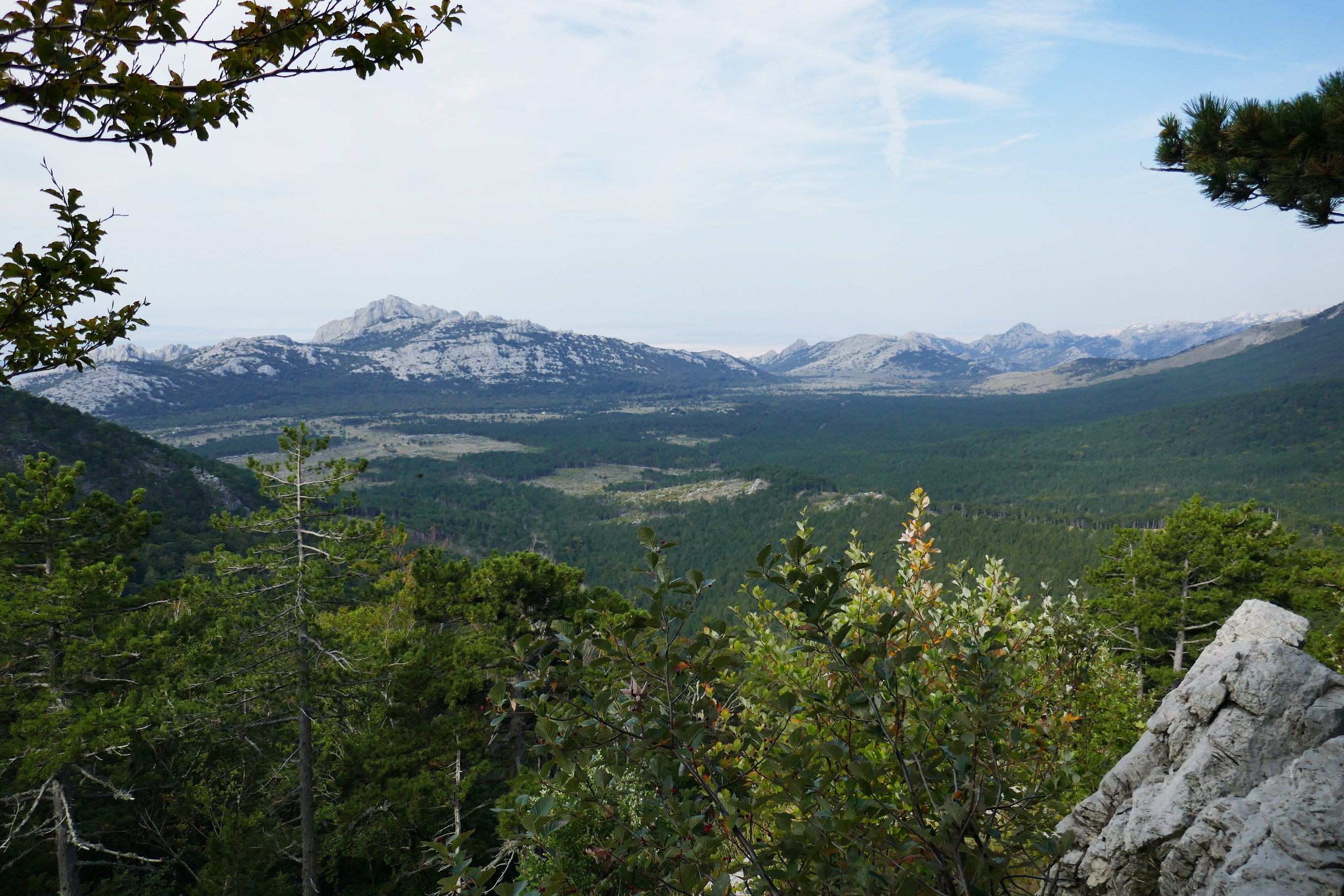 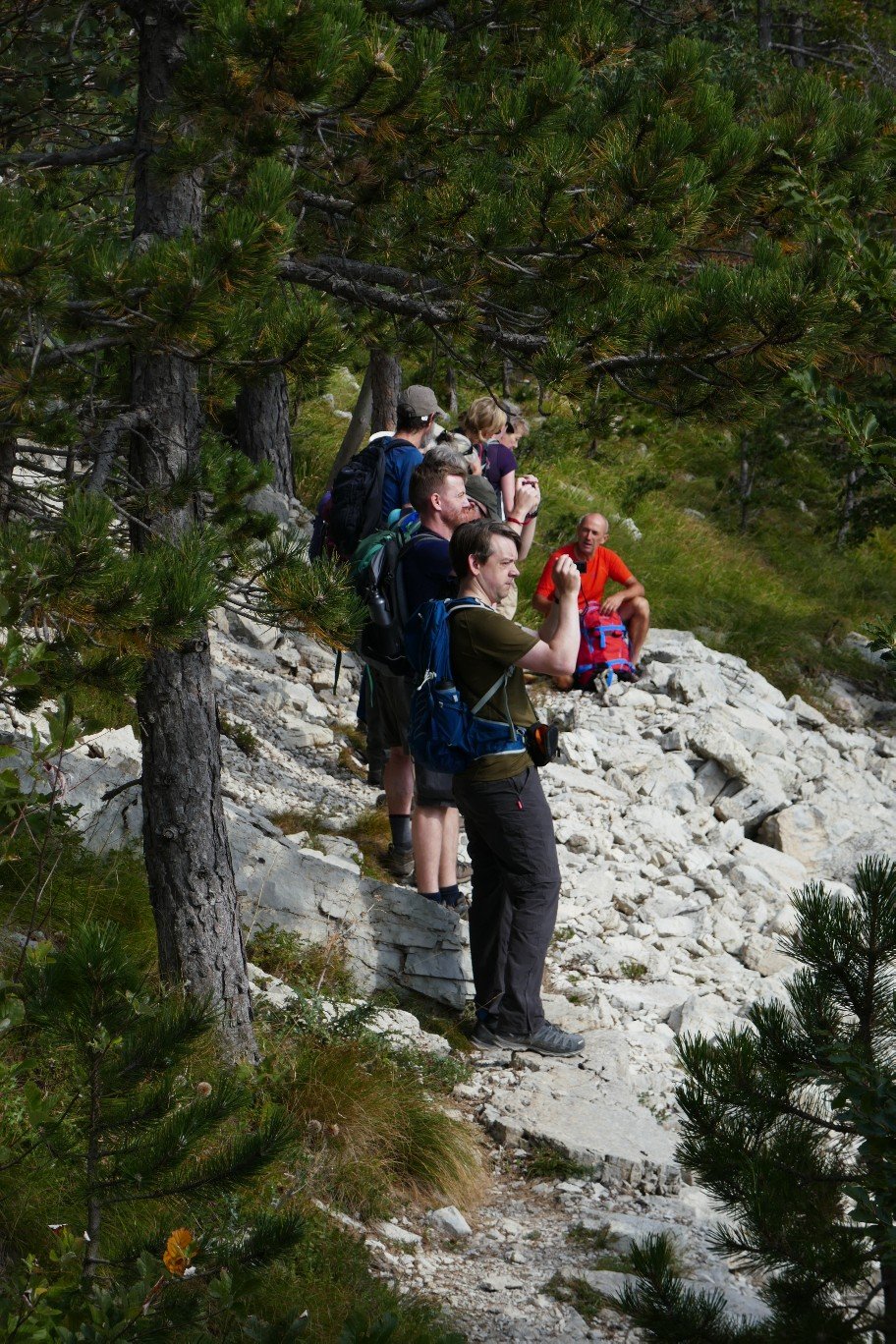 and Željko explained some of the geography of the route. At one stage, he darted off the path and came back with a vast wild mushroom 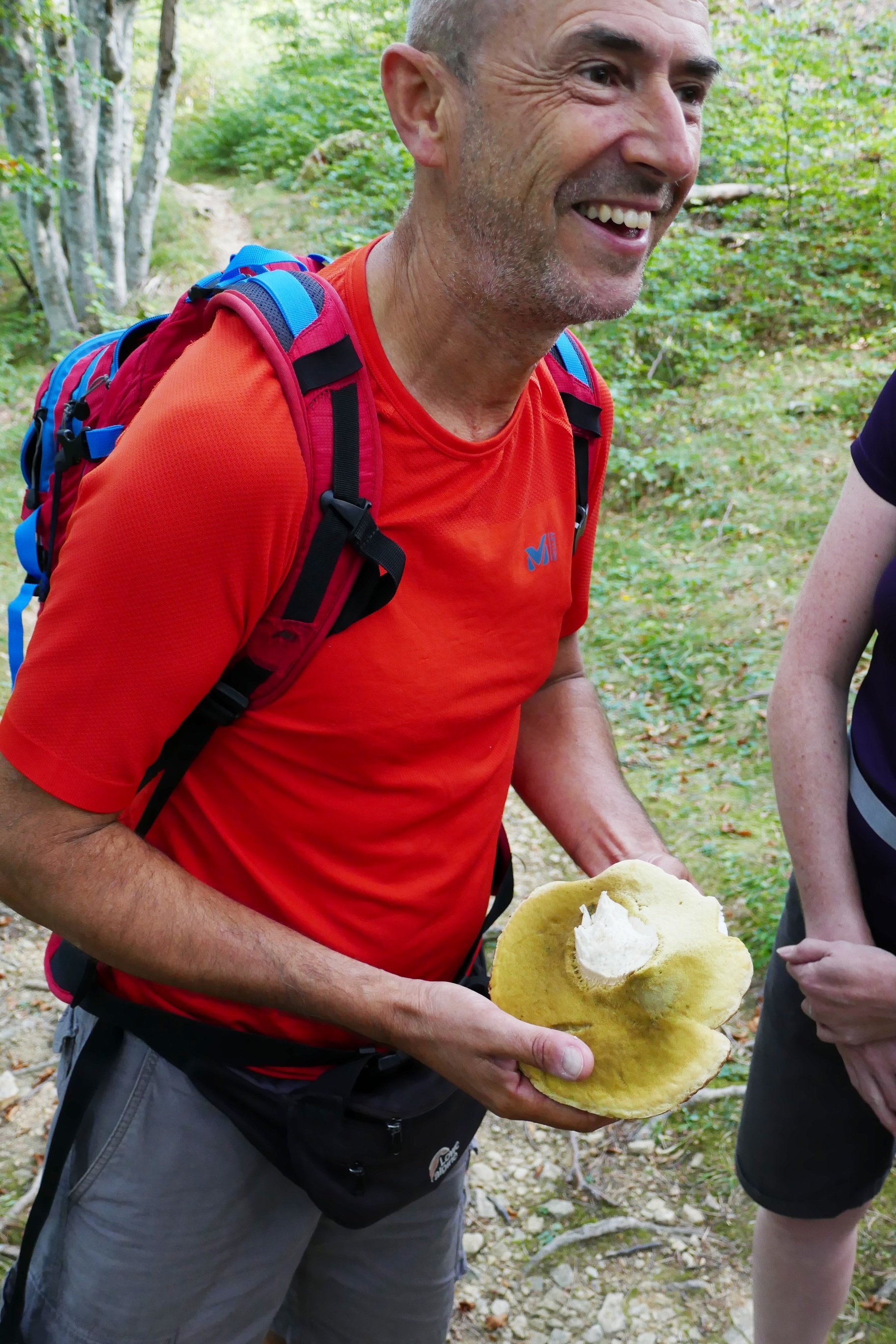 which we actually ate later that day, over lunch (of which more later).

The walk wound down through some lovely beech forest (which, as well as being attractive 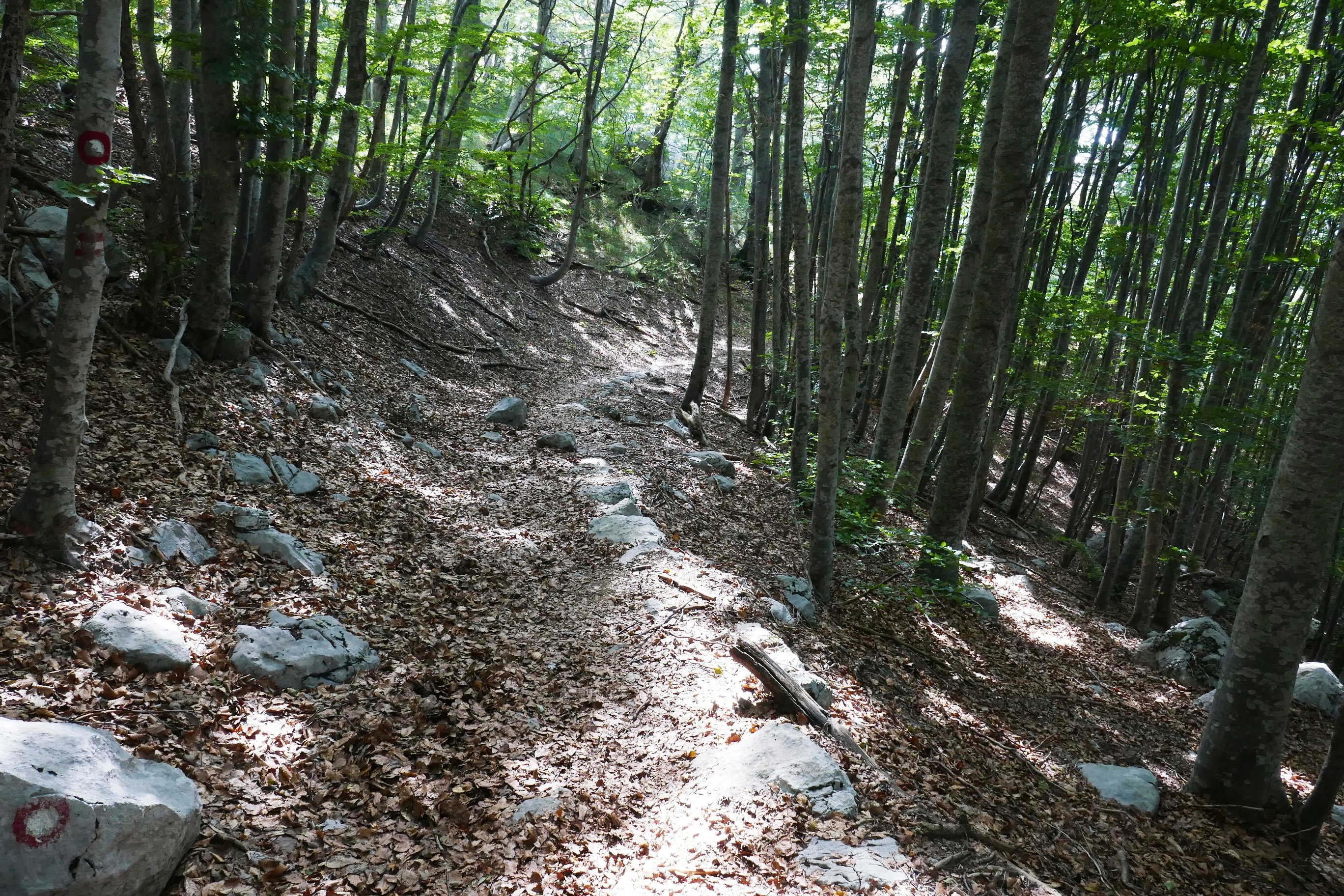 was in shade, so for a few short moments I actually enjoyed the walking instead of cursing uphill effort or downhill stones).

There were a few items of note on our way downhill to lunch. For example, evidence of some scientific experimentation being done to explore insect life which was beginning to affect the local pines, 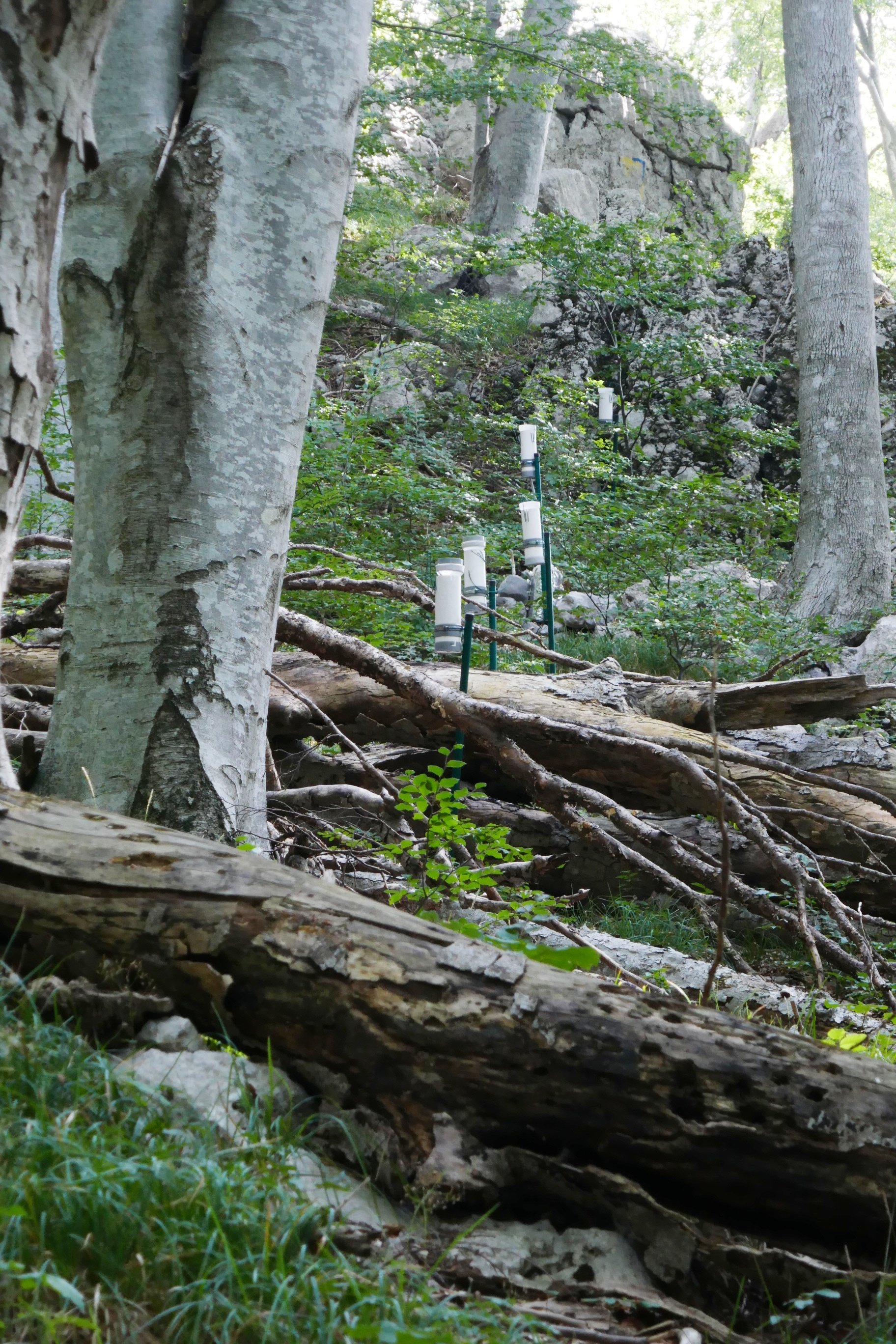 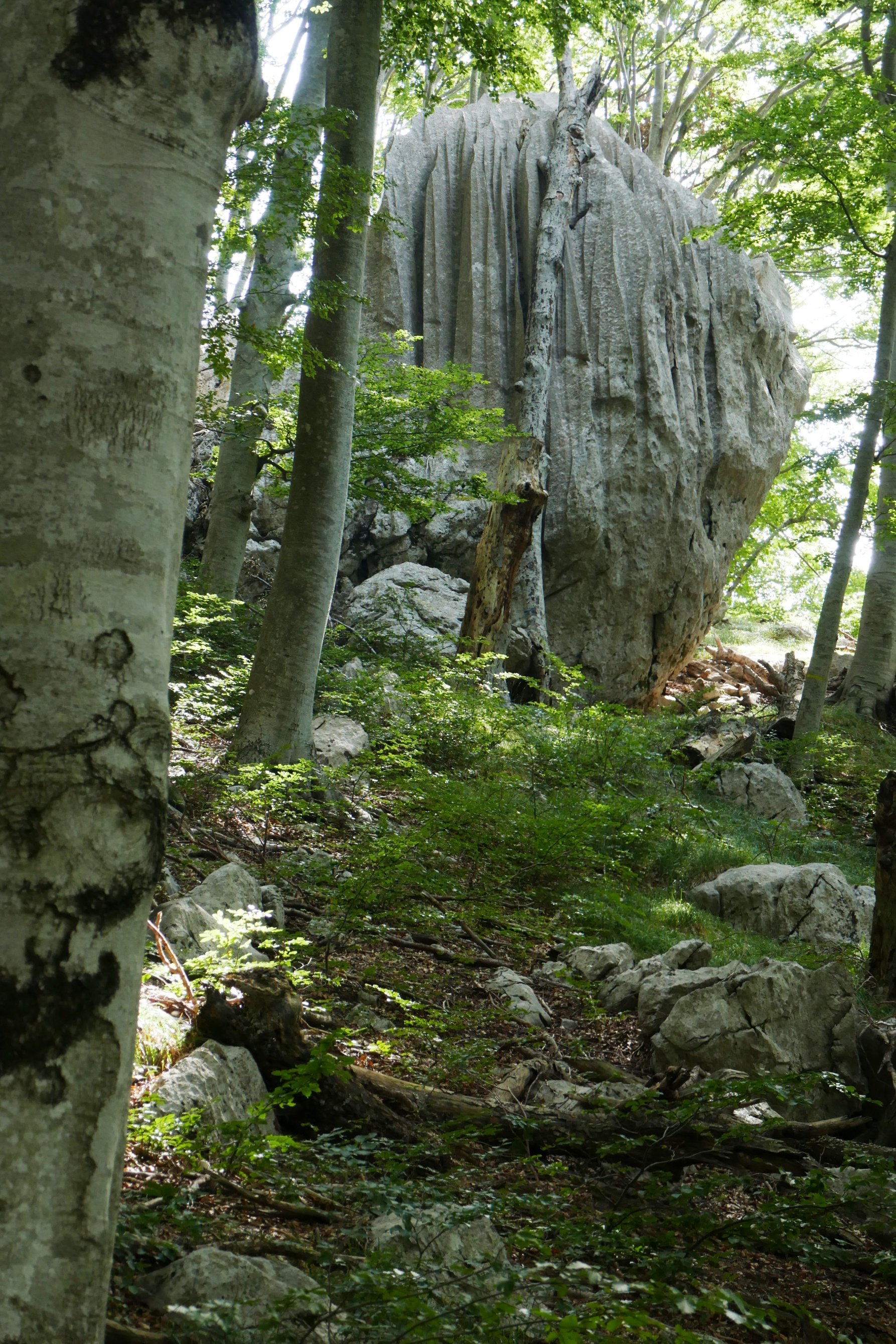 which Željko referred to as “radiators”, because of the vertical grooves etched by erosion, and some mystery berries. 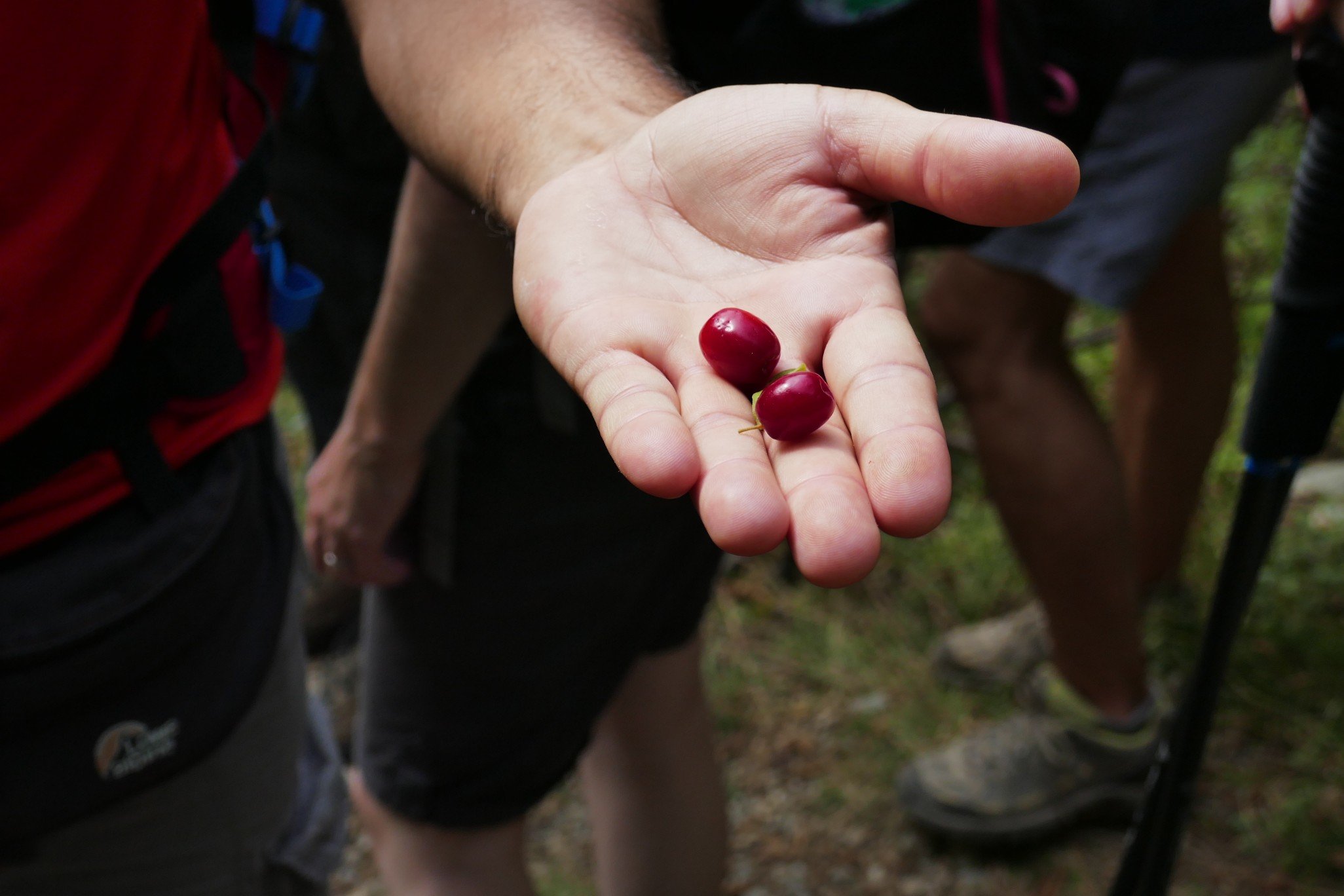 Željko referred to these as “Cornell berries” and offered them to people to taste. Jane had a bite and immediately condemned them as being too sharp, which meant that they would have turned my face inside-out, so I declined the opportunity. But it transpired that one can use them to make a liqueur, more of which later (again).

Nice as the woodland was, I beginning to get decidedly fed up with kilometer after kilometer of shambling downhill on an occasionally rocky track. So it was, on the face of it, wonderful when we stumbled across our lunch stop, which is a mountain hut called Ramića Dvori, run by a chap called Mario, who specialises in serving a local-recipe bean soup. We knew about it, because we’d had to put in our orders the day before, and Željko asked us if anyone particularly wanted vegetarian bean soup. It didn’t take long for someone on the group to point out that bean soup should in and of itself just be vegetarian, and it turns out that this bean soup actually includes sausage and so is technically a stew. It is my hard and fast rule not to post photos of food, so you’ll have to imagine a kind of ragoût, ‘cos you won’t see a picture. It was delicious and by the time we got there, everyone was palpably starving. 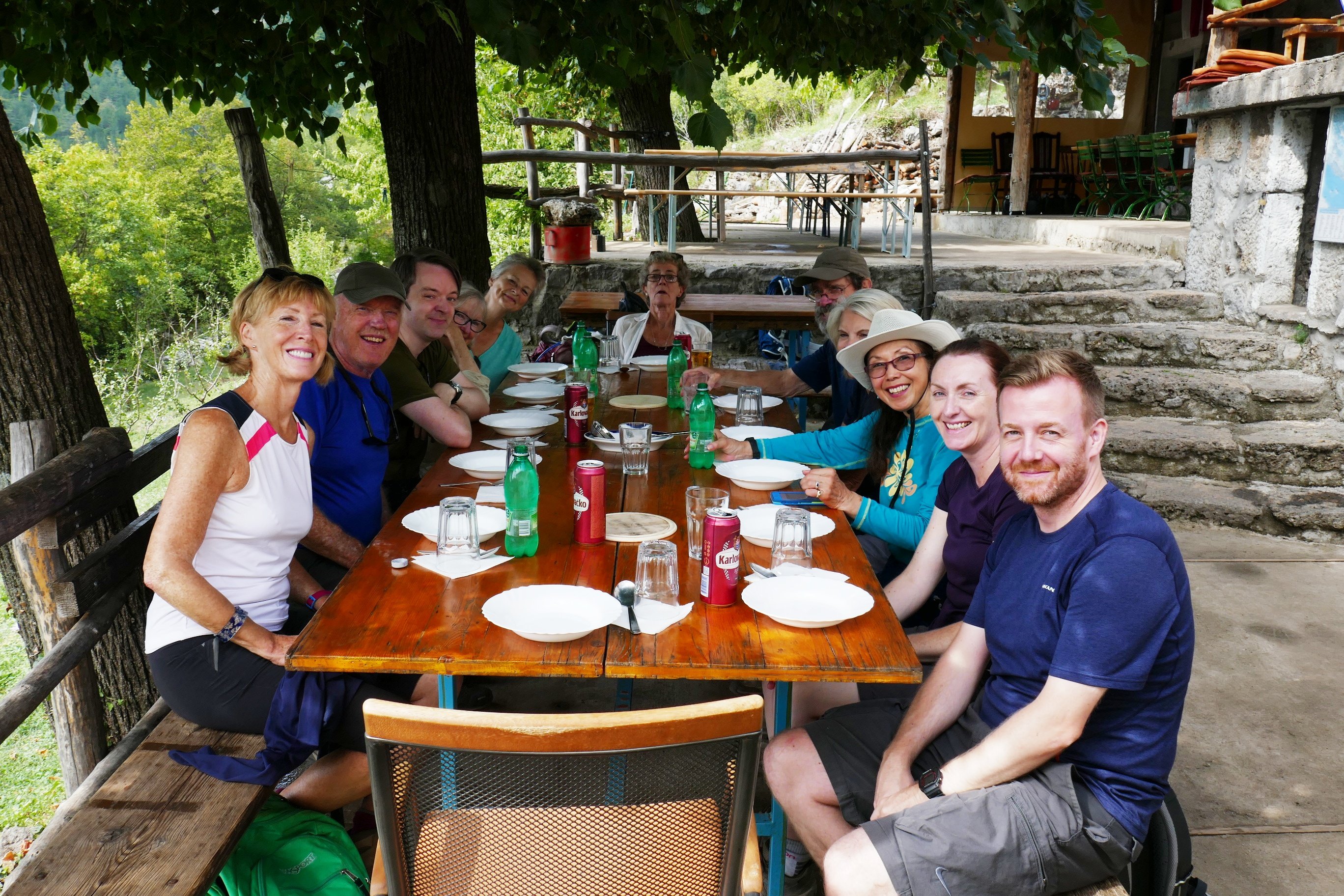 I mentioned that I’d taken the drone with me, and I managed to get a couple of snaps of Mario and the terrace we were lunching on. 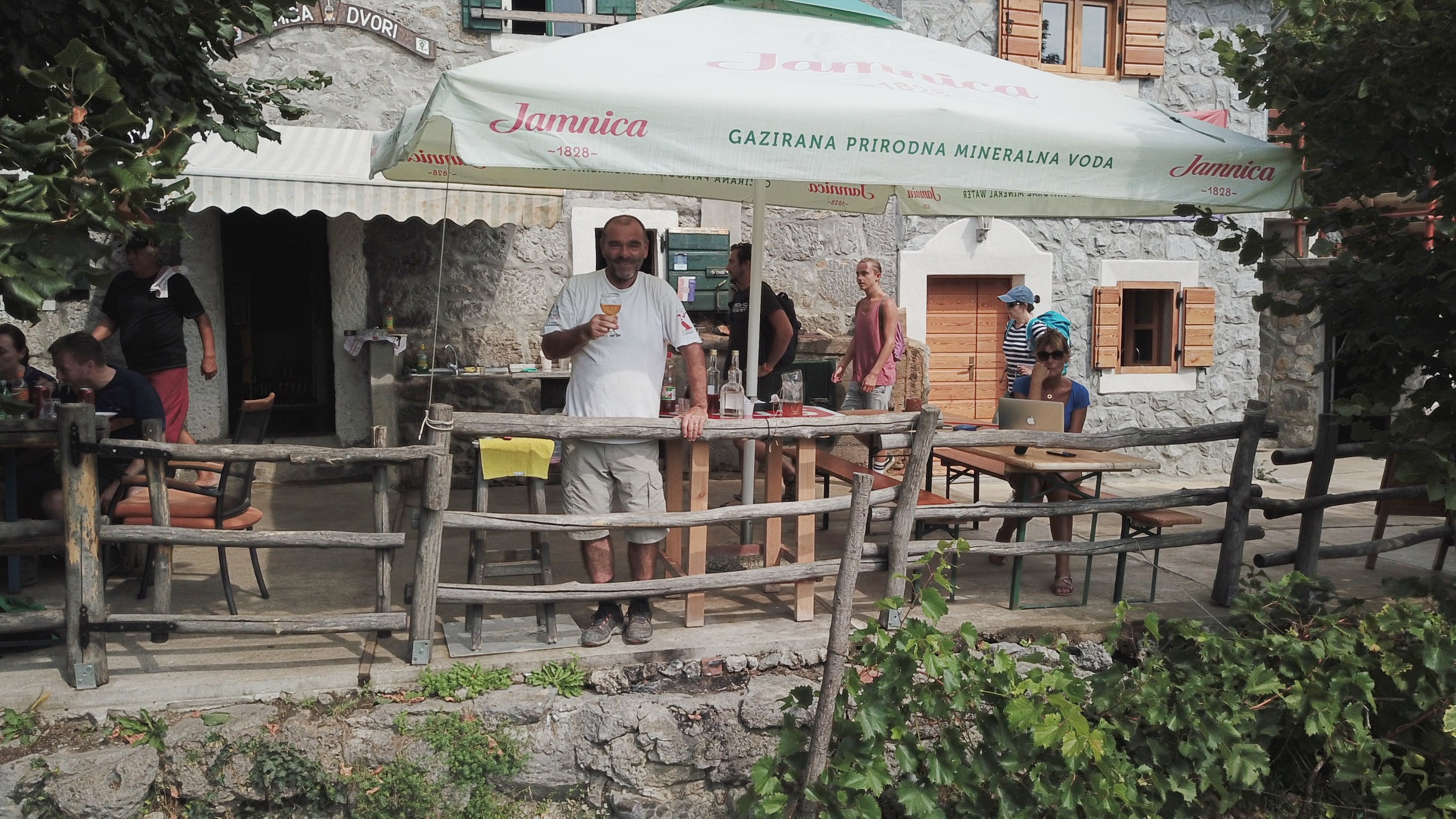 Mario was fascinated by the drone:

I mentioned “Cornell berries” earlier. Jane, having tasted (and spat out) one, thought that perhaps these were cornelian cherries. This thesis was confirmed as it turned out that Mario actually made some of the aforesaid liqueur (along with various other hooches of undoubtedly more suspicious provenance). On tasting, it seemed to be wonderful, so a few extra Kuna went Mario’s way so that we could buy a bottle of it. And the proof of the berries is on the label 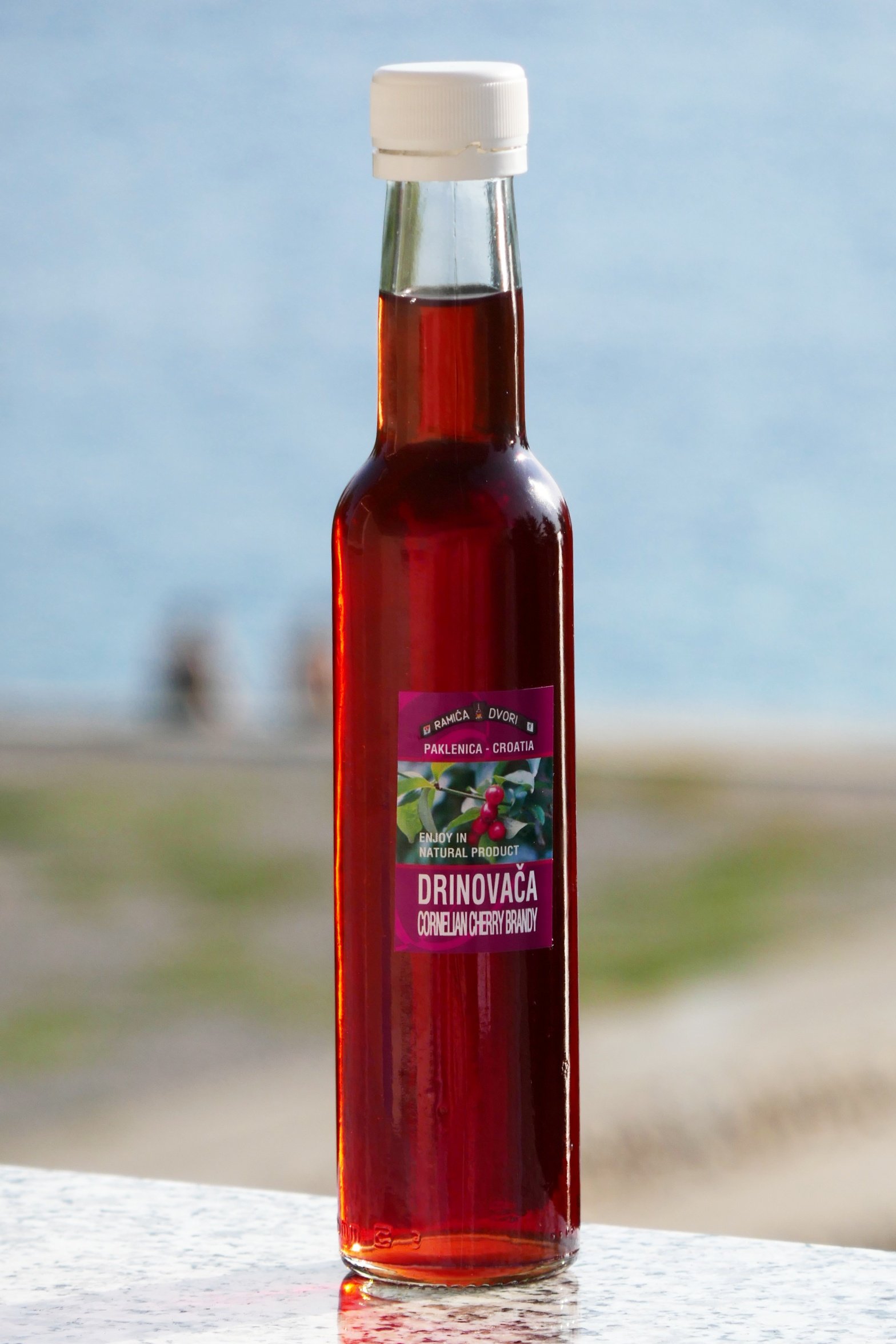 It tastes lovely in the Croatian mountains – let’s hope the taste transfers seamlessly back to the UK, ‘cos otherwise that’s seven quid down the drain, or maybe saved for unwelcome guests.

Before we left, Mario insisted not only on singing us a song, accompanied by his accordion, but also dragged random passers-by into help him. Just goes to show what a charming rogue the man is.

And so we departed and continued the long road down back to the Starigrad entrance to the Paklenica National Park.

To paraphrase Hoffnung, on the journey down we met a donkey coming up. Well, actually, I think it’s a mule, but that’s got the wrong number of syllabs. OK, there were other donkeys as well, I just didn’t get the photo of them. 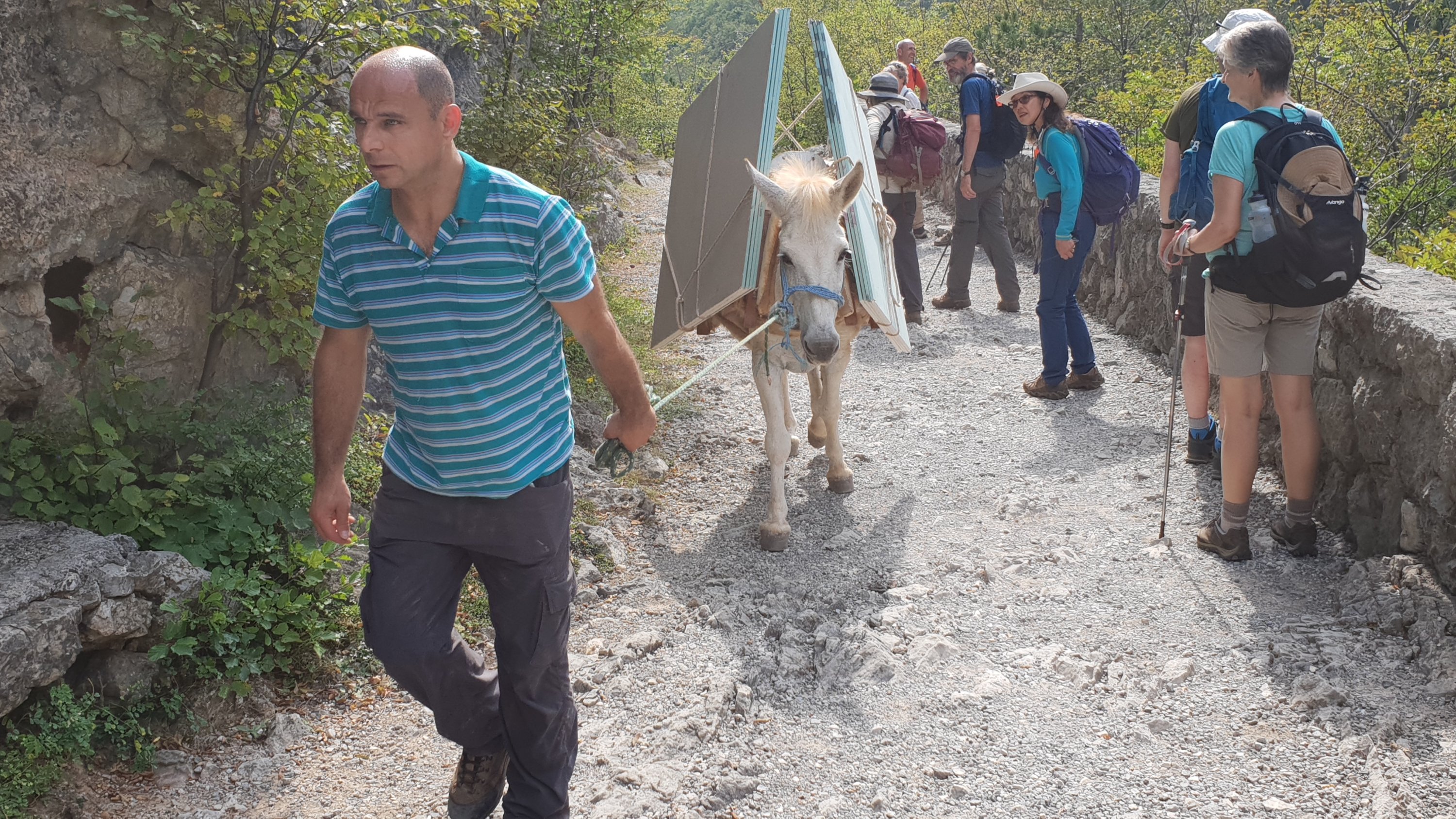 This underlines that the only way to get to and from this mountainside is on the track we were walking – no roads, no cars. So, for example, Mario has to walk two hours down the track at least once a week during the tourist season, and load up his donkey(s) with the supplies necessary to keep himself, his helpers and his restaurant going. There’s dedication for you.

On the way, we passed other places where we could have stopped for lunch or for refreshment, but Ramića Dvori made up in charm what it lacked in menu variety. And anyway, it had beer – there’s nothing more important that that!

As we headed to the park’s exit, we passed (and were subsequently passed by) a mountain rescue team who had been out on a practice session which, sadly, had ended badly. And it became clear that we were in serious mountain climbing territory. There’s a particular face, called “Anića Kuk”, which features some serious climbs, including one in the global top 10 most difficult. Looking at the rock face, one can imagine this is so. 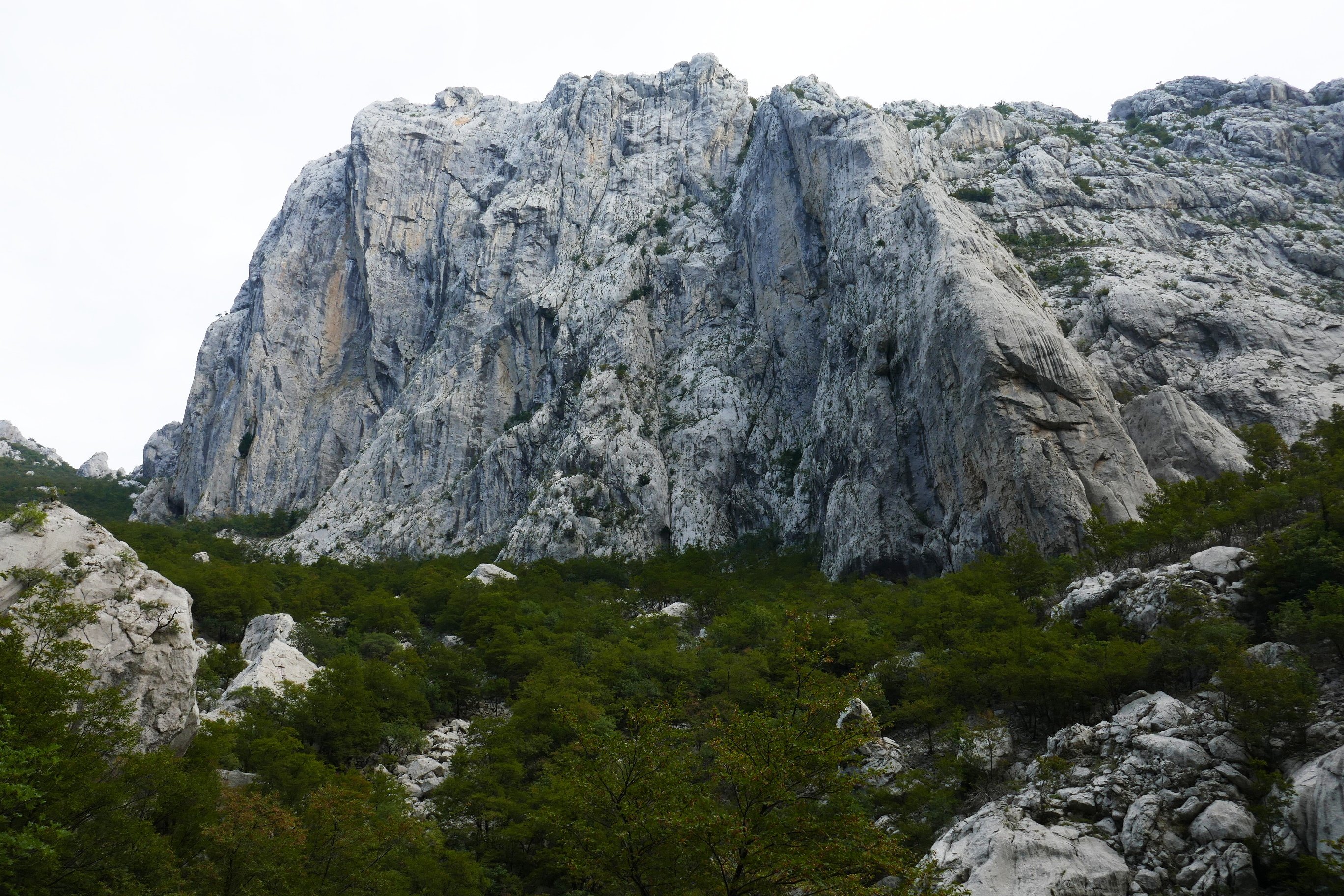 and all around us there were people climbing and practising. 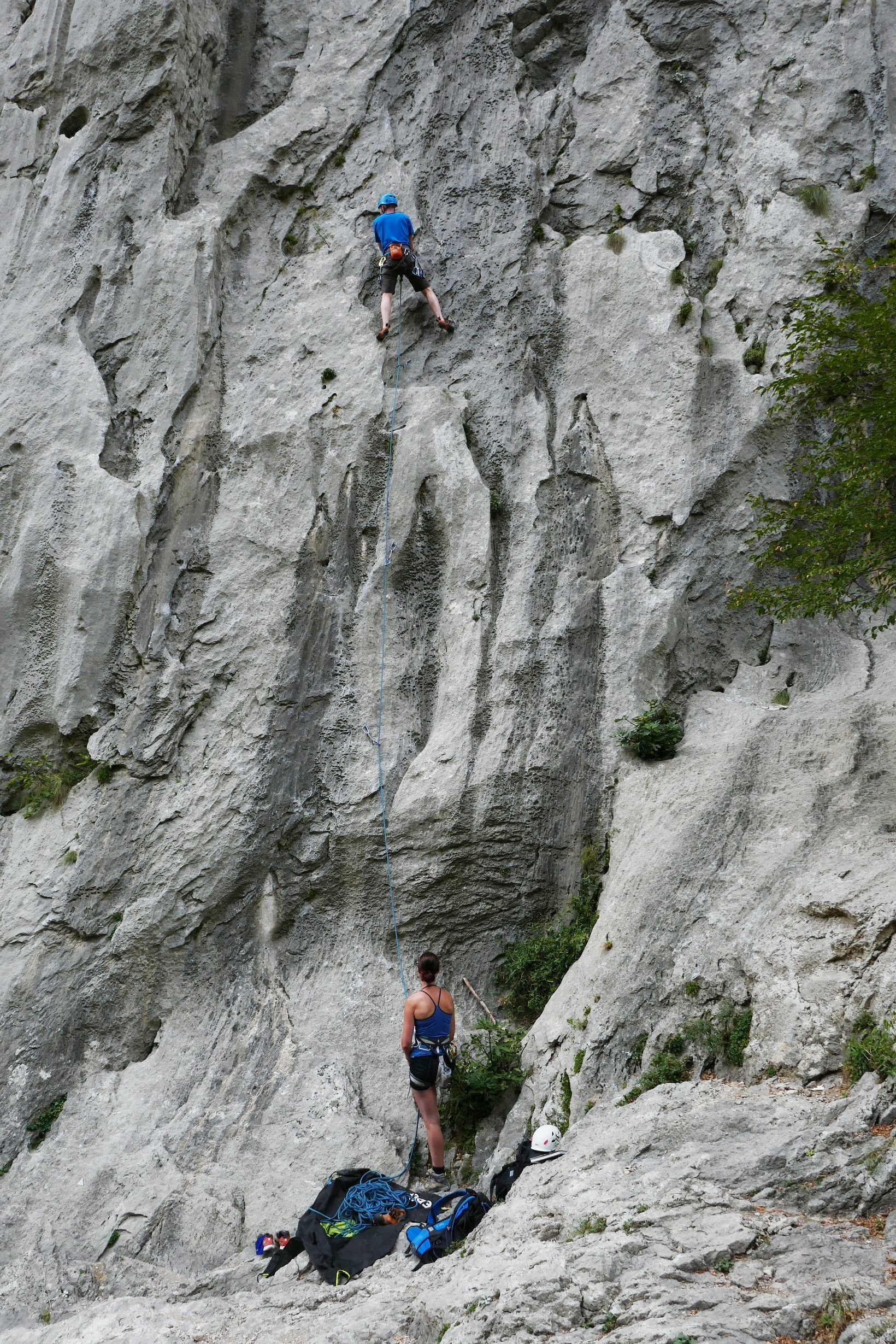 By this stage, we had walked some 13 kilometres and, given an 8-seater bus to take the twelve of us back to the hotel, were offered a choice, for those not lucky enough to get in the first shift: carry on walking; or wait 20 minutes for the bus to come back. Reader, there were those in our group insane enough to volunteer to walk. Aged and wise as I am, I sometimes struggle to understand my fellow mortal. You can be sure that my sharp elbows got me on the first bus home.

After a shower and a rest, Jane and I decided to go for a stroll to explore the fleshpots of Starigrad Paklenica. This turned out to be a swiftly-executed task – it’s not a big place – but did involve seeing a nice sunset, 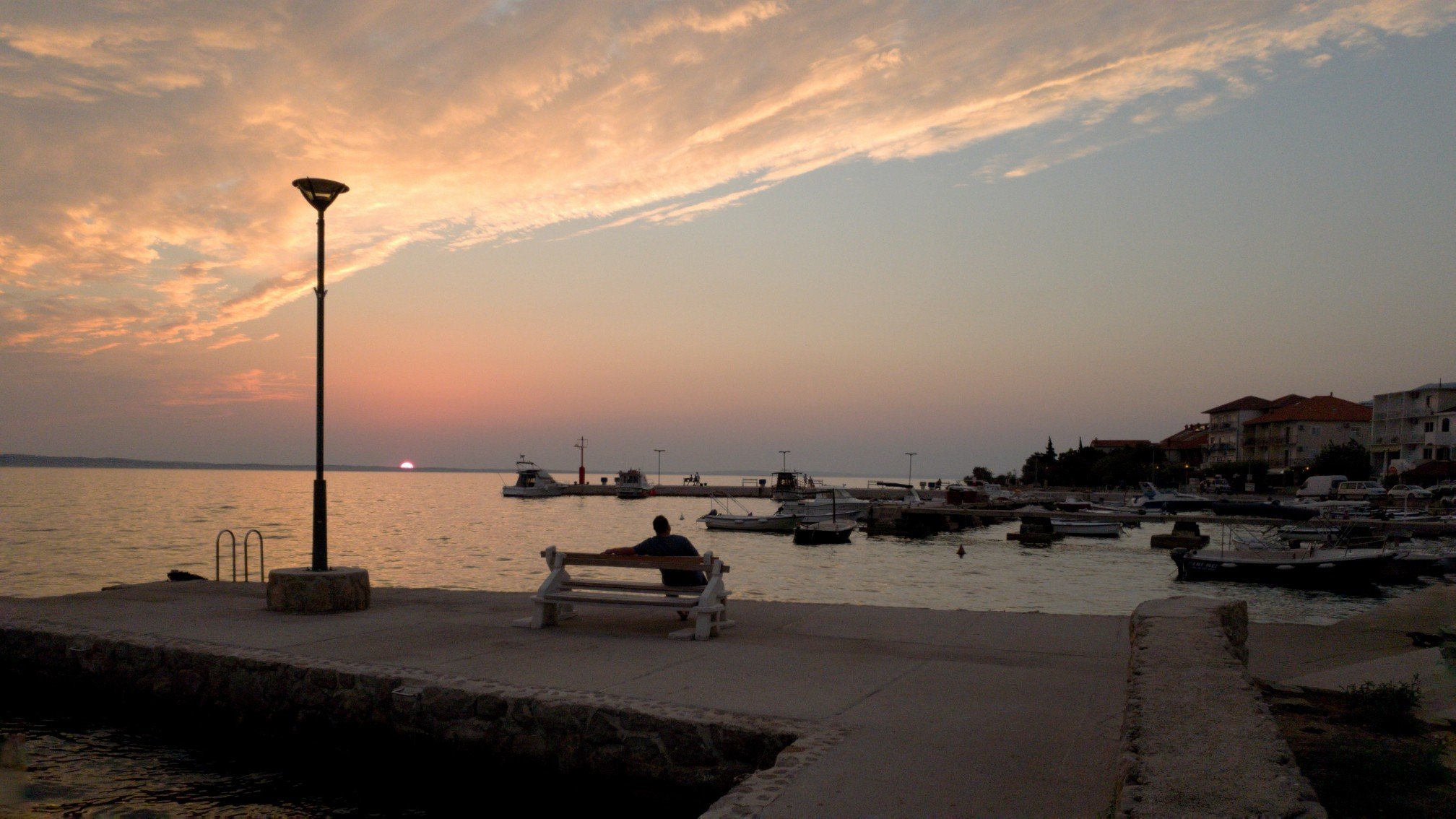 which set us up nicely for a couple of G&Ts before taking a well-deserved early night.

During the long, long stumble down 1,000m vertical, I decided that I’d had enough of walking in this heat. Uphill, which I hate anyway, is torture for me in 30° heat, and downhill on uneven, lumpy, stony paths had taken their toll on my knees, ankles and goodwill. Knowing that the next day’s walking was going to involve a 600m ascent in unbroken sunshine enabled my subconscious to come up with an excuse to stay at home – these blogs don’t write themselves, you know, and I was two days behind. So I resolved to use Day 7 to catch up with this blog. So the one about Day 7 – the final day’s walking – will actually be photographed and written by Jane. That, if anything, should be the tempter you need in order to keep you reading…..