When our plane landed at Lima airport, the cabin crew announced that it was in Callao province, 15 minutes from the centre of Lima.

Nowhere in Lima is as short as a 15-minute drive from anywhere else. In Quito, our guide, Paul, warned us about the traffic, but no warning can prepare you for the reality. The congestion is bad, but I’ve seen worse (downtown Bangkok, London near the ExCel when they close the Blackwall tunnel); however add in the local driving style, and that makes a ride through the traffic an exciting and thrilling experience. Our entire journey from the airport was one long game of chicken, a distracting backdrop to the (actually very useful) information that our guide was giving us about our schedule whilst in Peru.

It seems that some preparation for altitude is necessary (and Sunvil had arranged a smooth increase in altitude across successive destinations, from Lima (sea level) via Sacred Valley (2400m) to Machu Picchu (2800m) to Cusco (2400m) to Lake Titicaca (3800m – the last time I was that high was in the Swiss Alps, and the simple effort of walking along a corridor carrying skis made little spots dance before my eyes). So we were given this advice to mitigate altitude sickness:

The last one is within my DNA; let’s see how the others work. 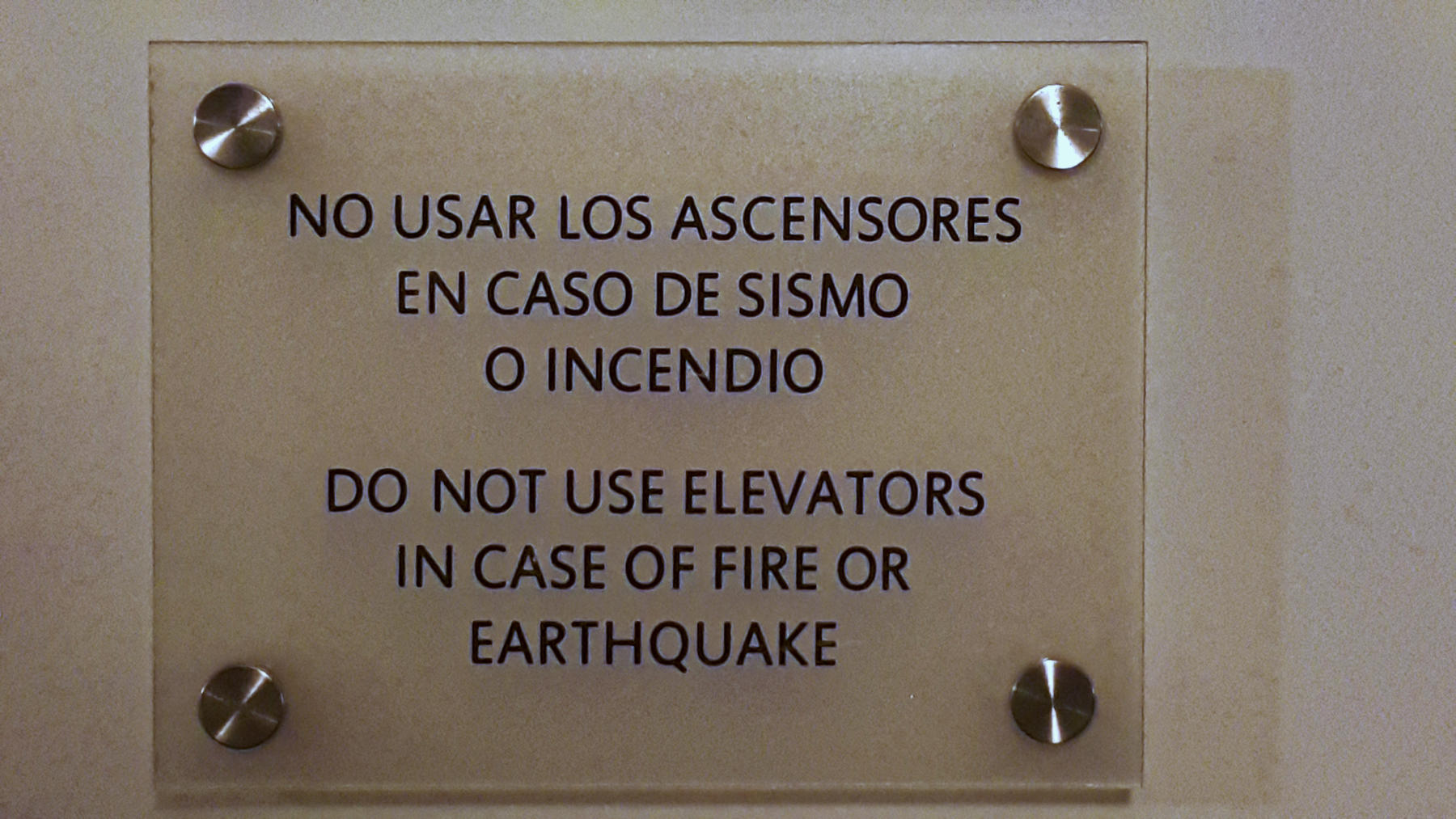 Our schedule included a morning tour of Lima, and we had a very charming guide called Hernando to show us around. It became clear that Lima, unlike many other capital cities, was not going to be very easy to get a flavour of. We actually spent two hours of the three-and-a-half sitting in traffic, while Hernando alternately regaled us with information about the history and culture of Lima and Peru and indicated points of interest as we ground past them (unable to stop and take photos, unfortunately). There are many handsome buildings dotted around Lima that date from one or two centuries ago. Unfortunately, the space between these buildings has been taken up with many more modern buildings which are (a) ugly, (b) tatty and (c) in many cases unfinished. Rather like London, really, but much, much scruffier and without the rain.

The first thing Hernando showed us was a pre-Inca site for which preservation efforts are being made – a huge pyramidal ceremonial site made out of adobe bricks. (We later got a chance to take a couple of photos.) 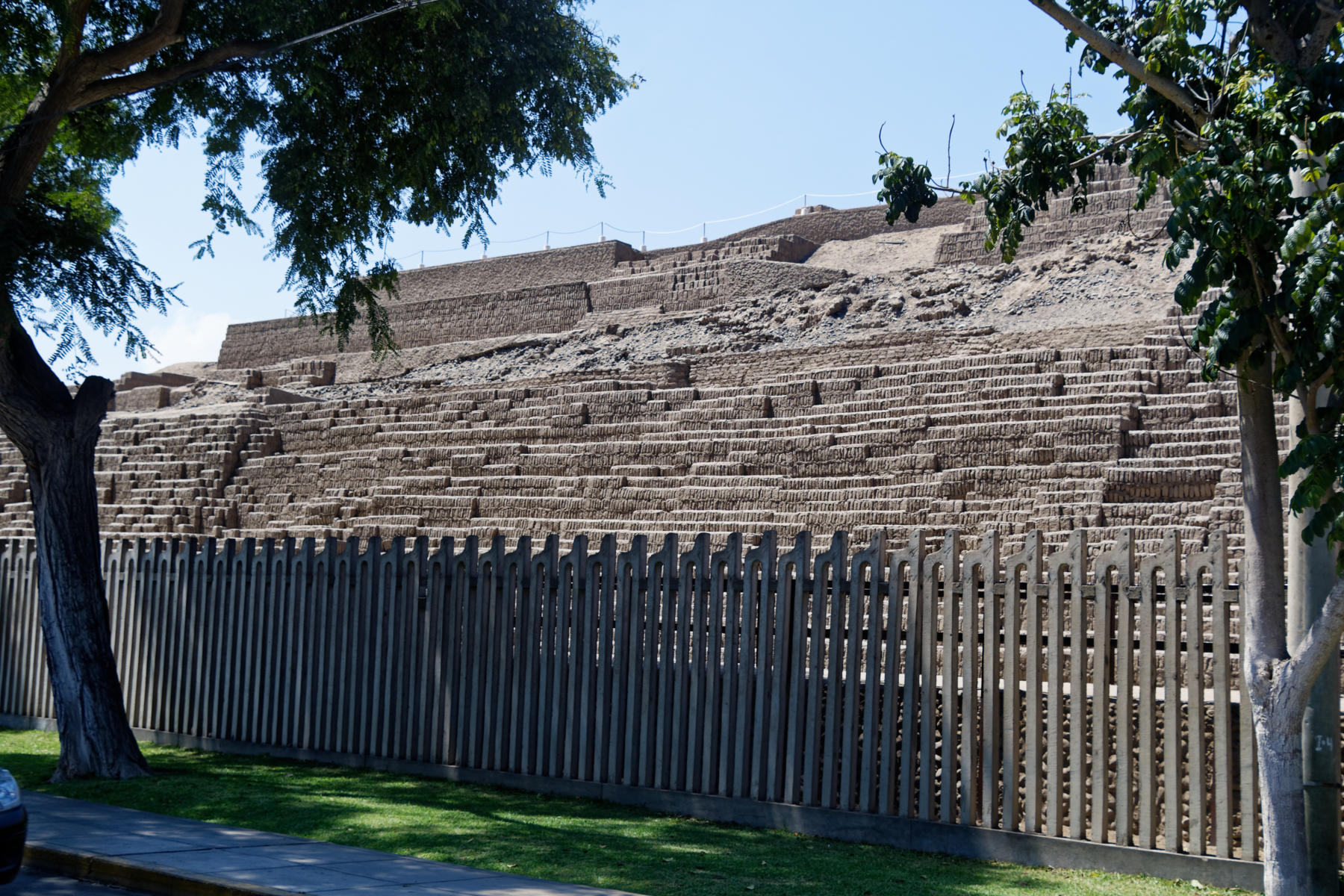 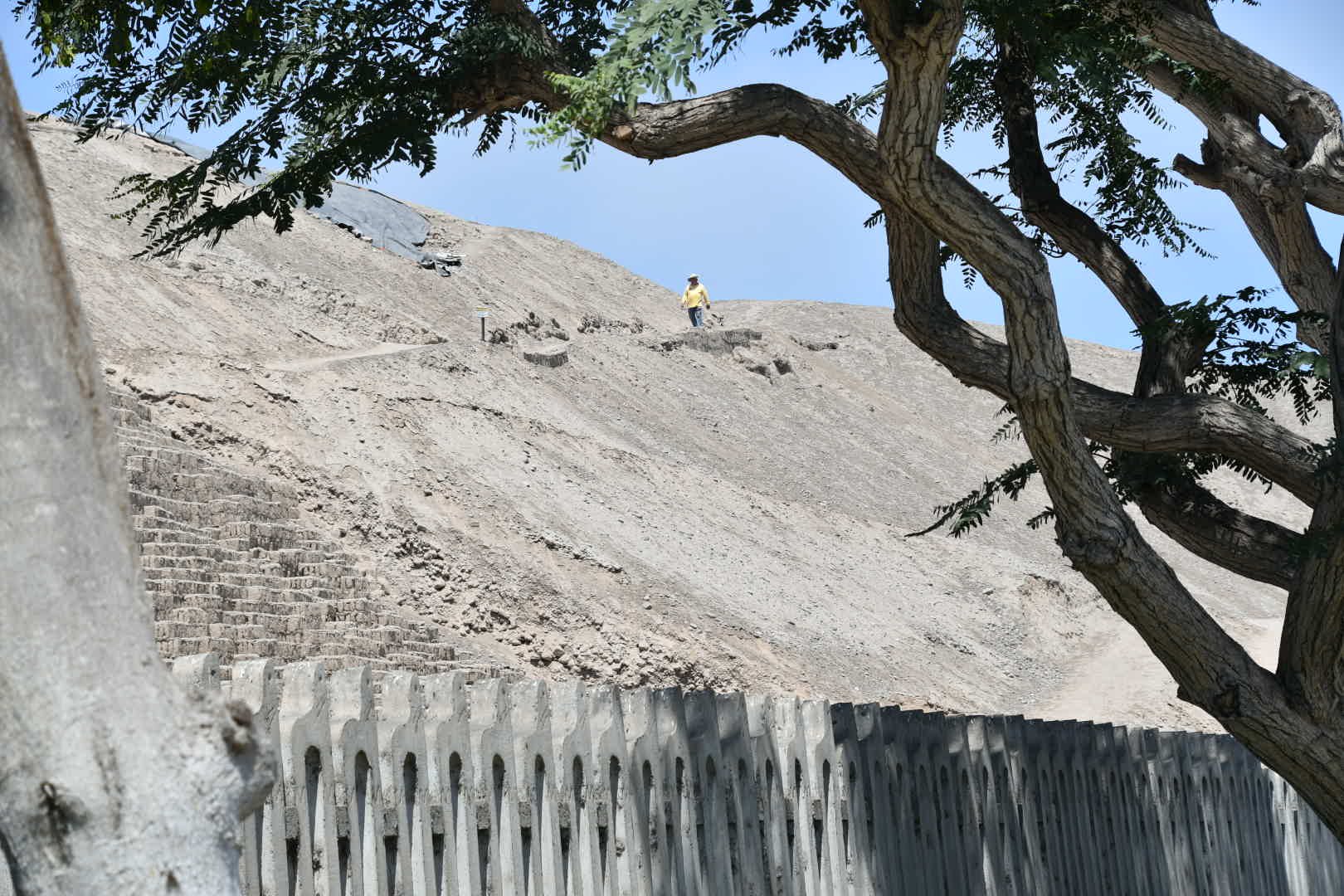 The Incas were known as builders who thought big, but they came relatively late to this part of the world, and various tribes had been here for three or four thousand years before they came, and it was they who built this site, and many others around Lima, since destroyed. And then, of course, came the Spanish, led by Pizarro, who built and declared Lima as the capital and ruled the area until Peru declared independence in 1822. The time of Spanish rule is referred to as the “colonial” period, and the centre of Lima does represent an opportunity to walk around and see some of the highlights. These include the very handsome main square, with the cathedral 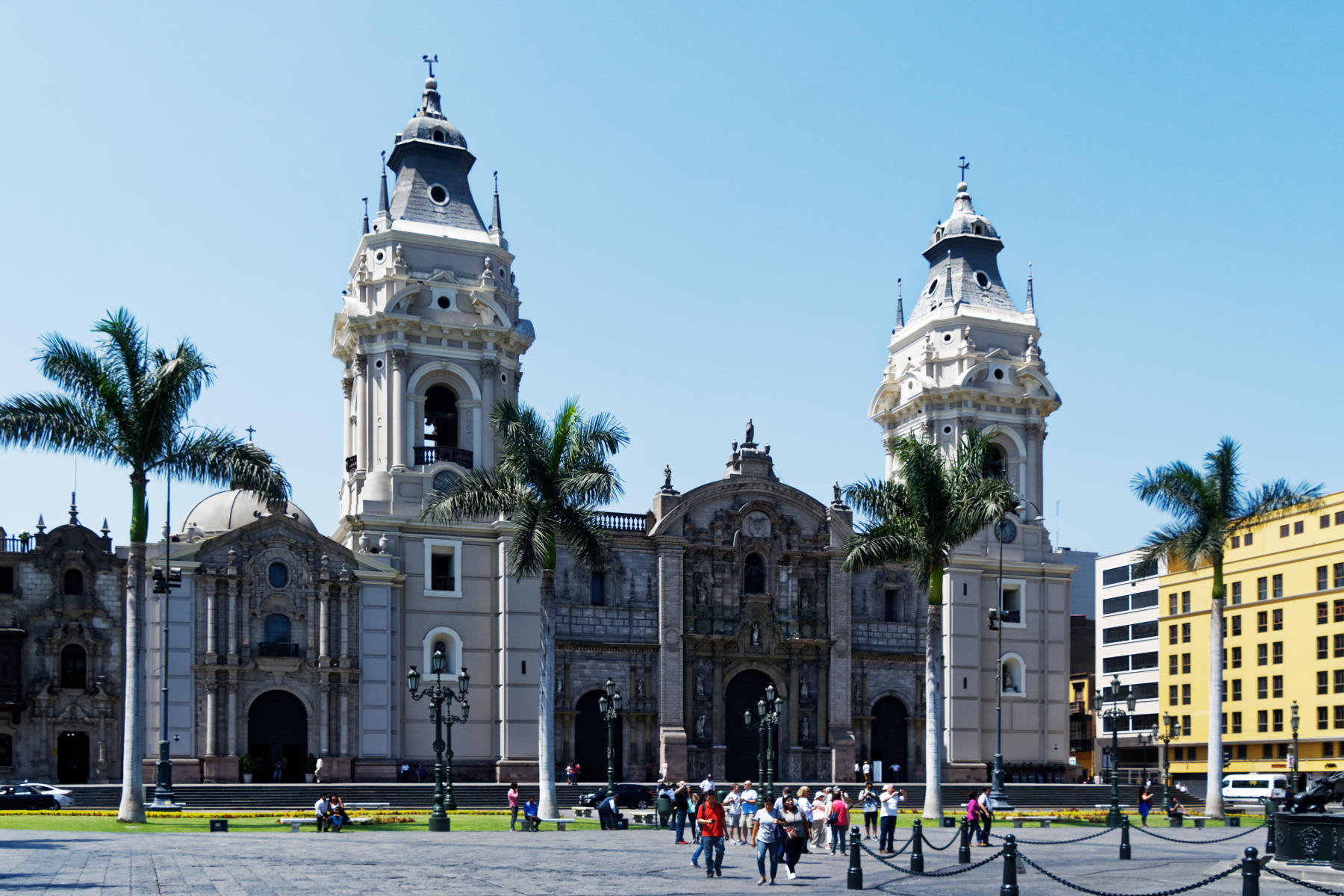 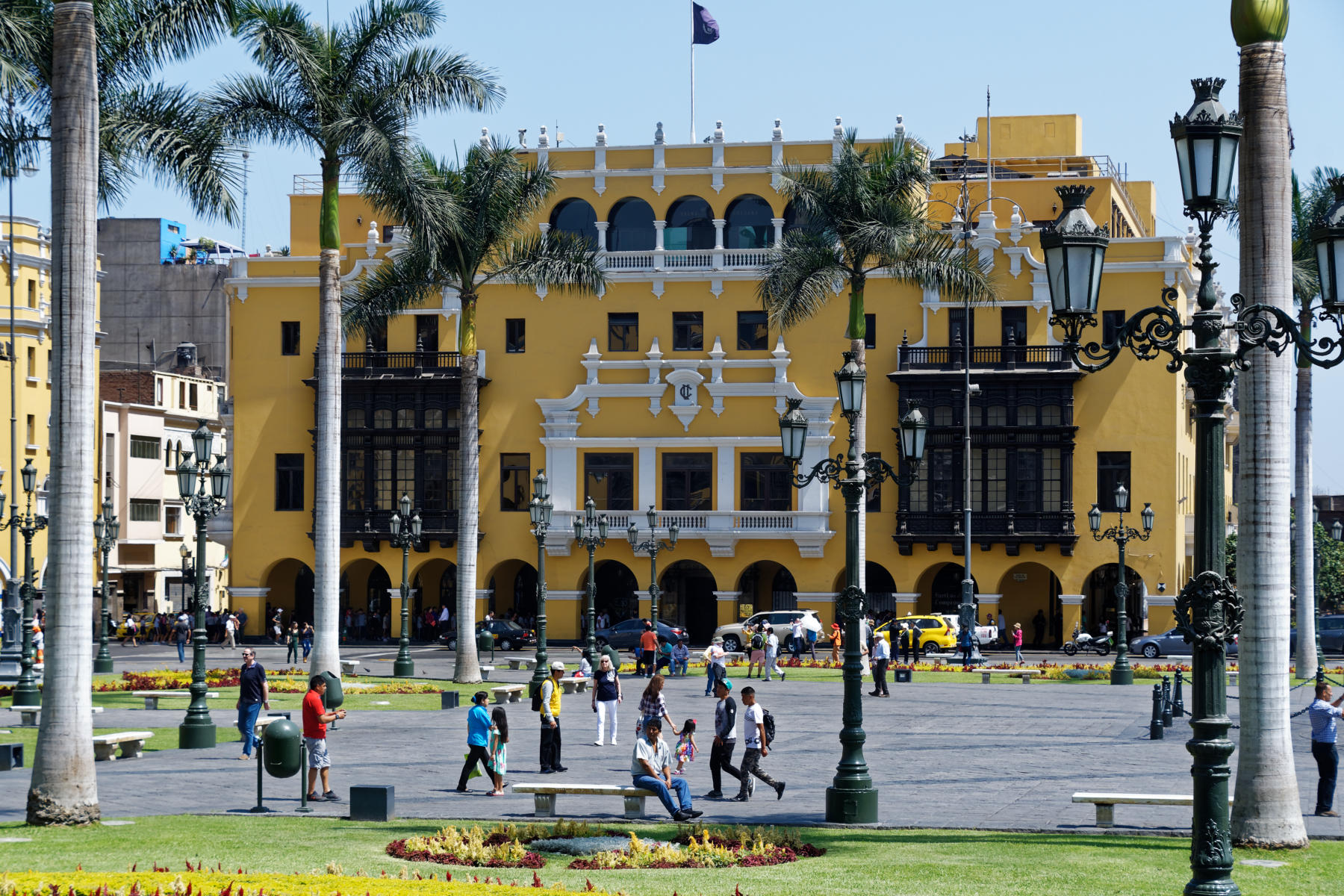 and other significant buildings such as the Presidential Palace (from the 1930s, too big and ugly to be worth a photo). Other buildings we saw included the old railway station, now a literary centre of some kind, 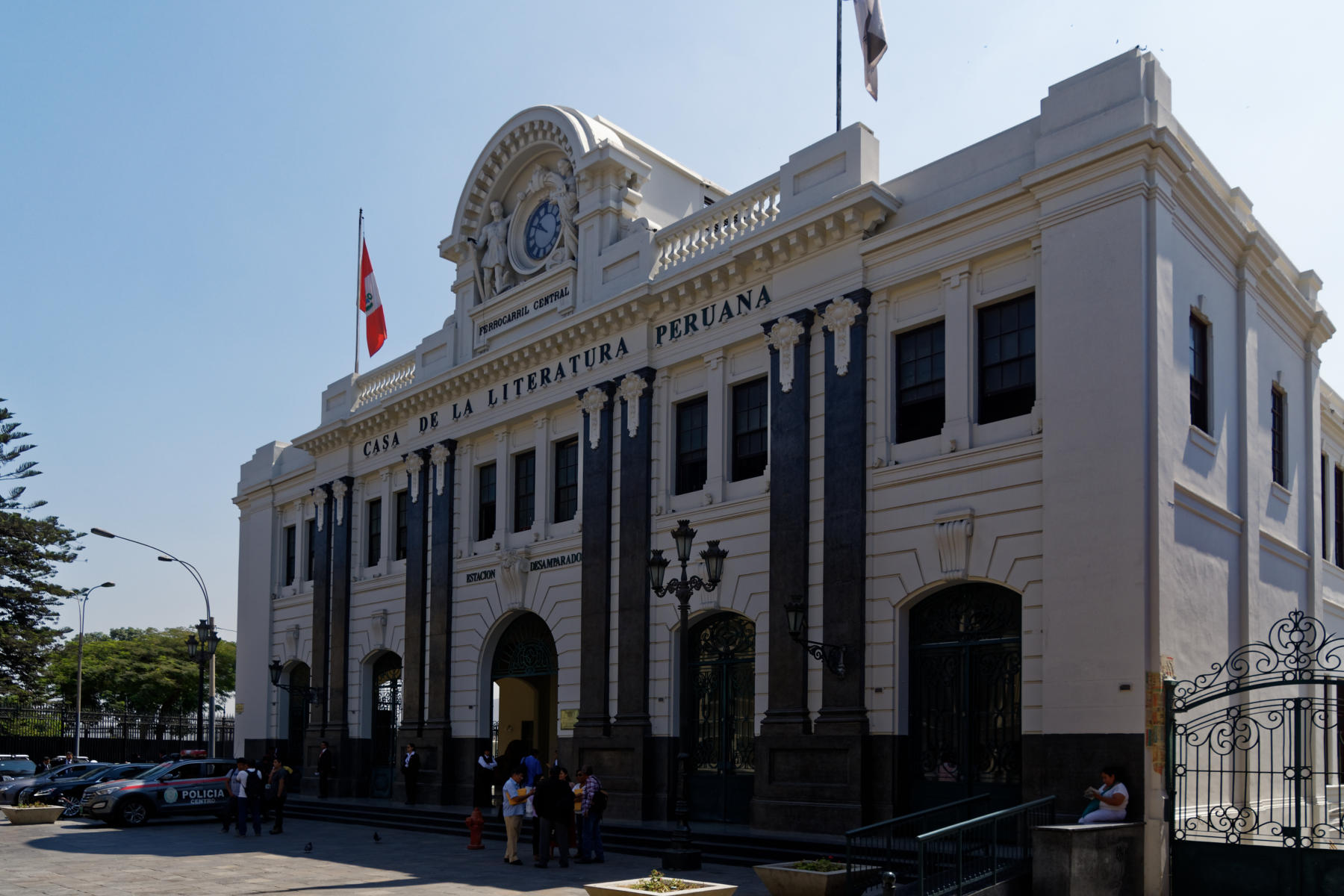 and the old Post Office, now lined with tat stalls, but not without its charm. 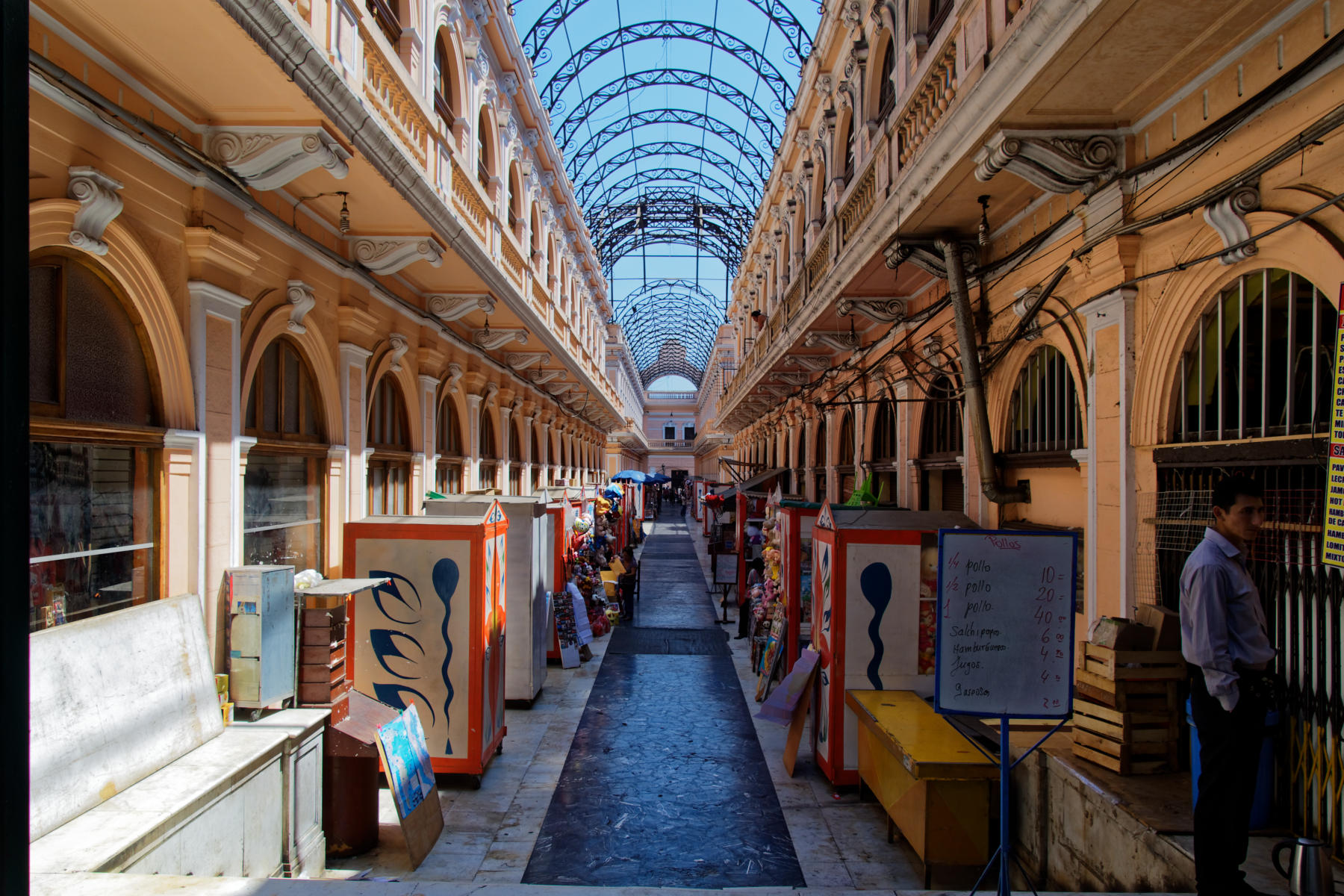 However, a large chunk of the 90 minutes spent walking around in Lima was spent at the Franciscan monastery, which, rather like the one in Quito, is large, imposing and which forbids photography. However, the ban is poorly policed and so I sneaked a few phone shots. There are cloisters 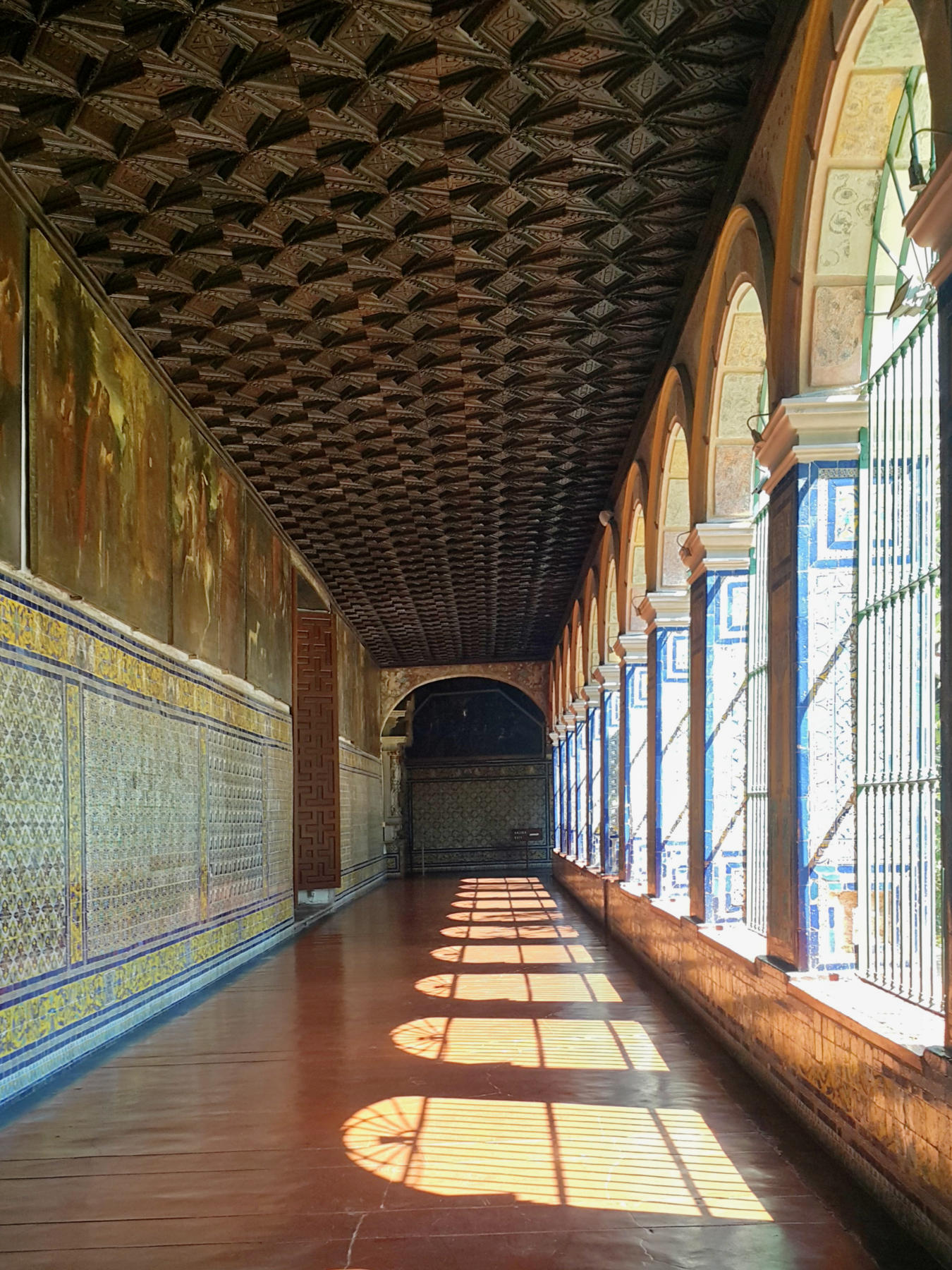 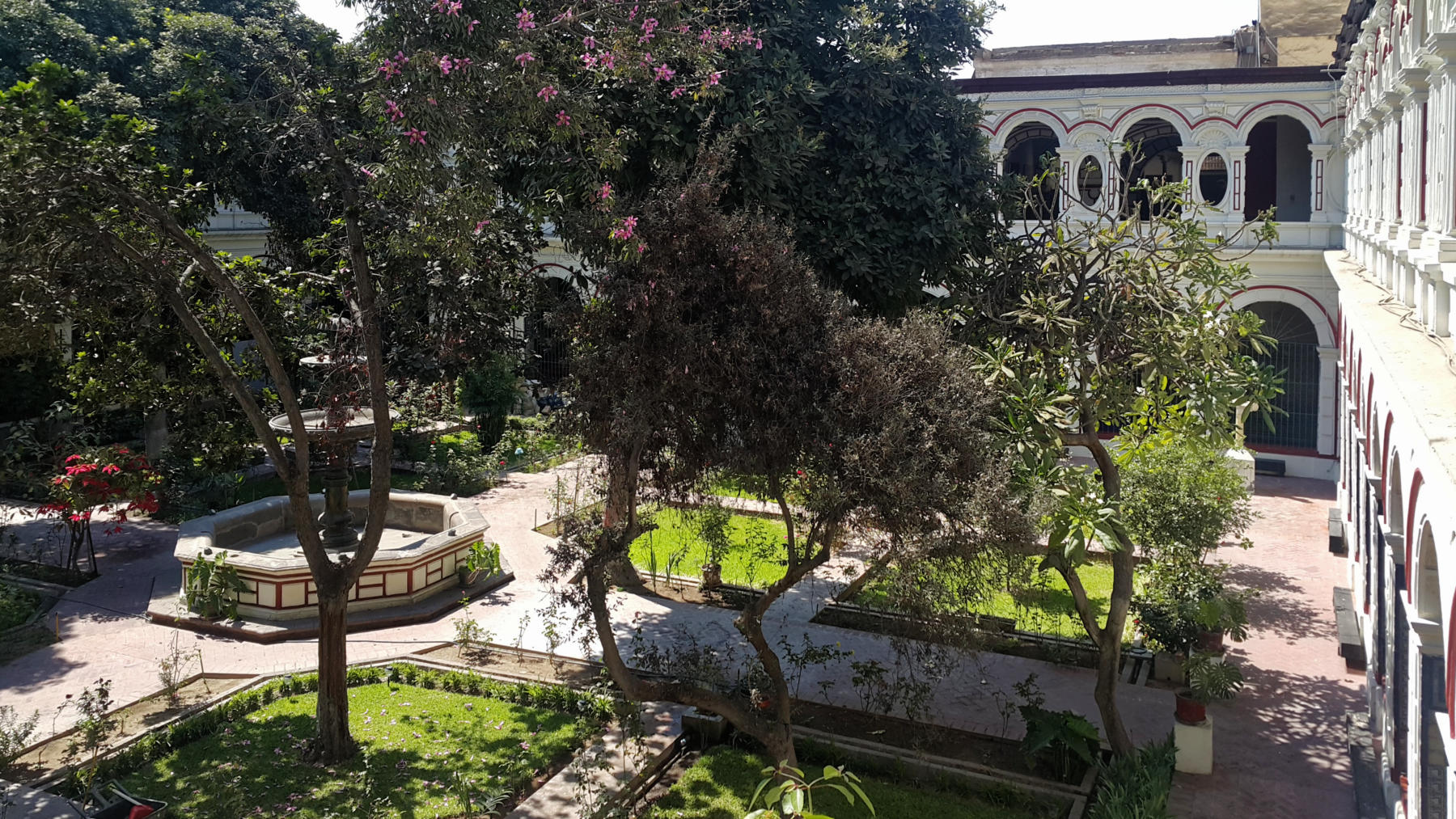 and used to store some impressive processional items. 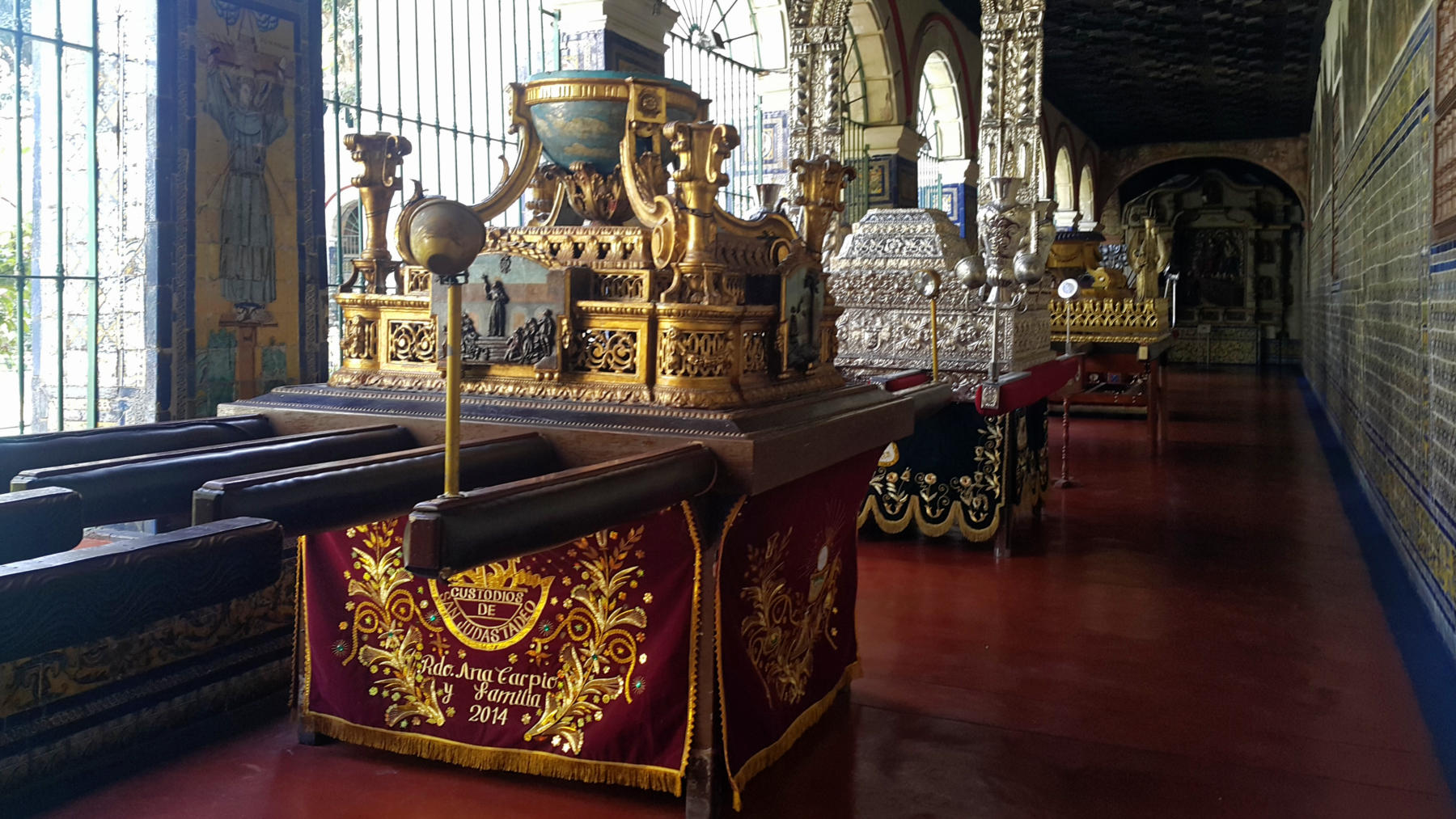 The inside of the church is striking 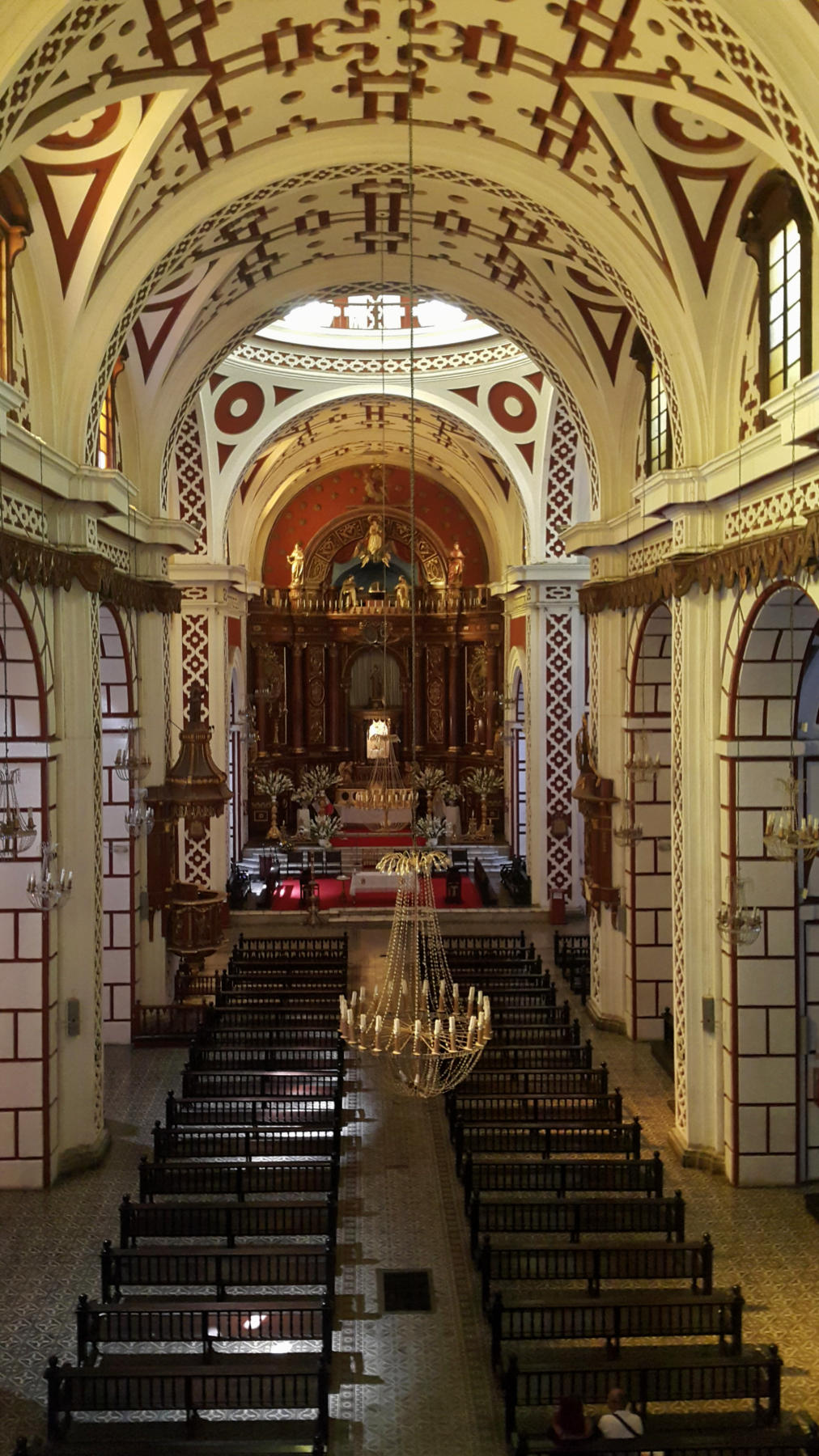 and, off to the side, in the choir, were some beautifully-carved pews where the monks could study their magnificently-illuminated texts – supported by small perches called “misericordia” (mercy) rather than having to stand for hours. 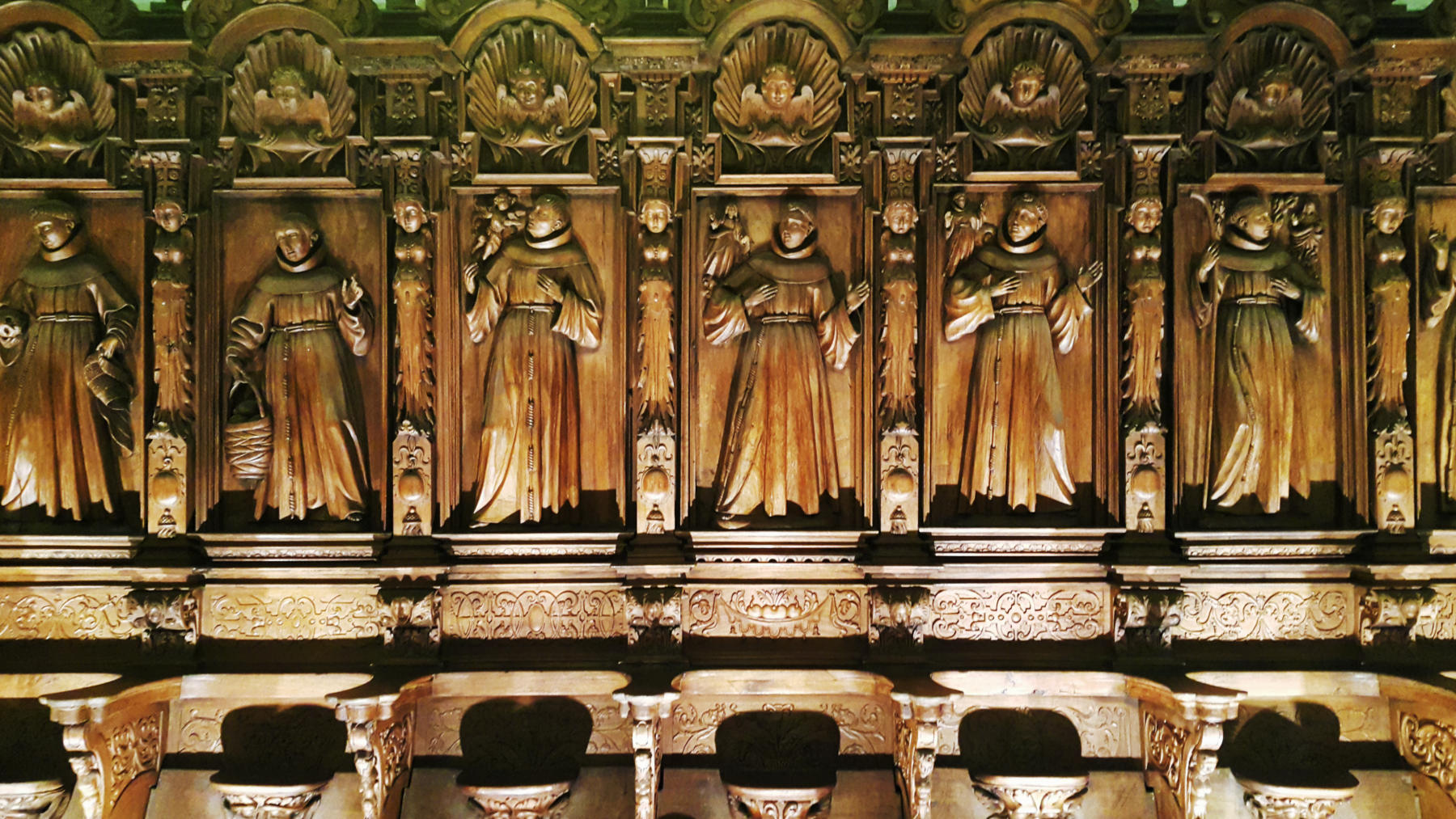 In exhibition cases were a couple of original examples of illustrated texts. They are things of beauty, but what particularly entranced me was the early musical notation included with the texts . 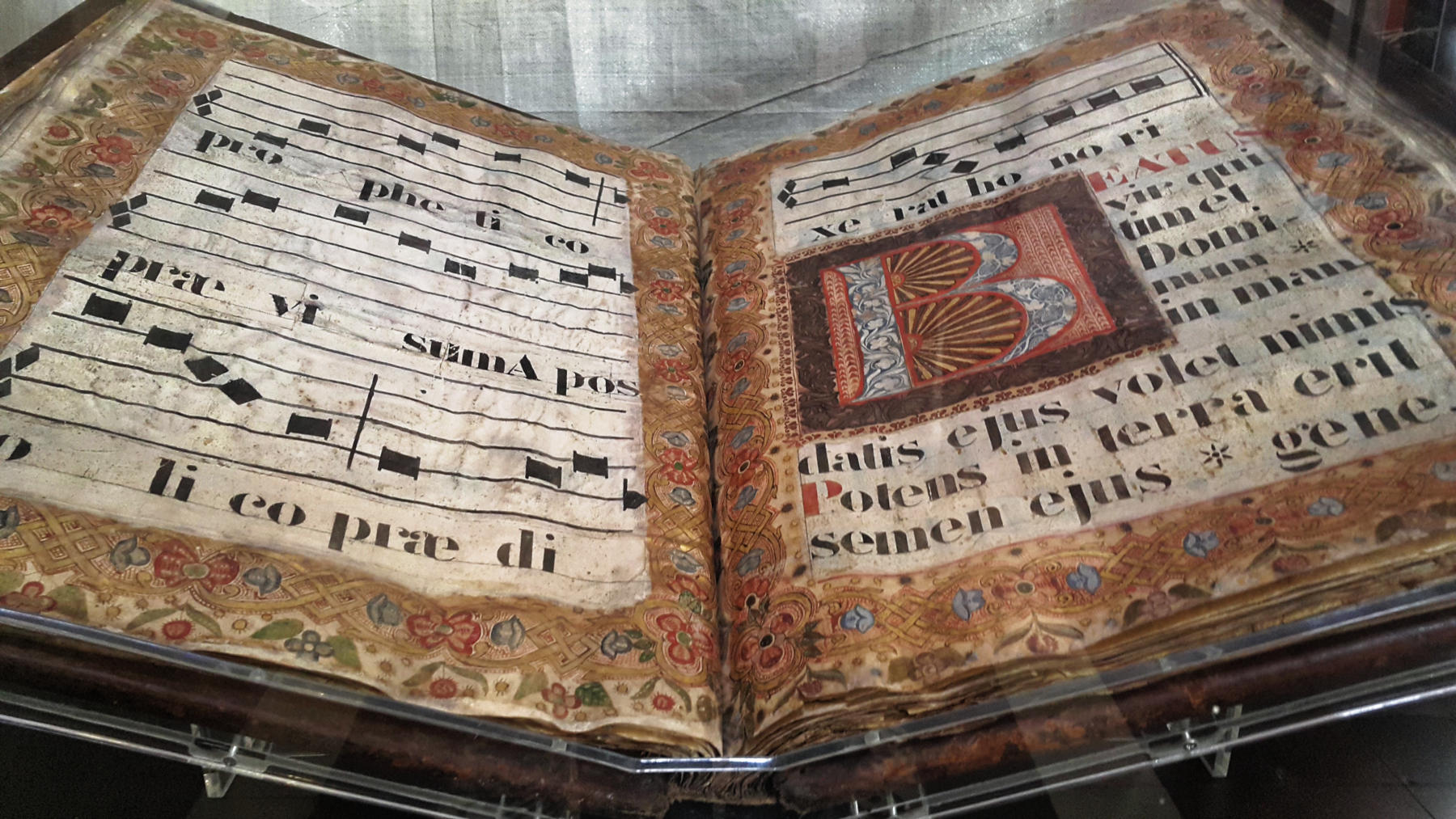 There was a macabre element to our visit as we visited the catacombs, where, at one stage, up to 35,000 (poor) people were buried (the rich could afford their own mausolea, of course). Actually, the available spaces had been filled, (brick-built compartments filled with levels of bodies covered in earth and lime) to the point where the bodies (or what remained of them, ie skulls and large bones) had been exhumed, ready to start again, when the use of the catacombs was discontinued. So there were bones, bones, bones everywhere, laid out in chests, used in decoration on staircases 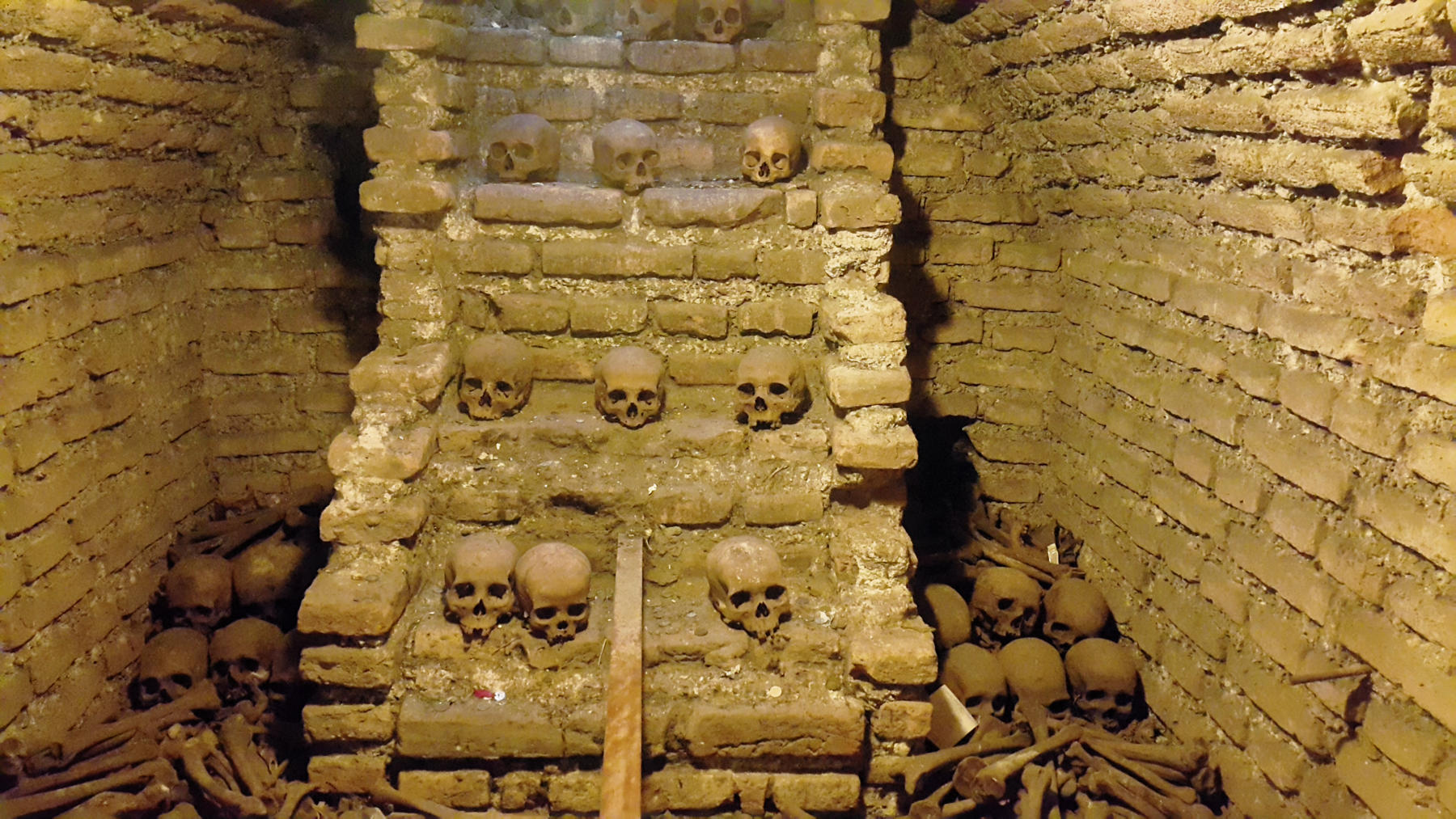 and even in a well! 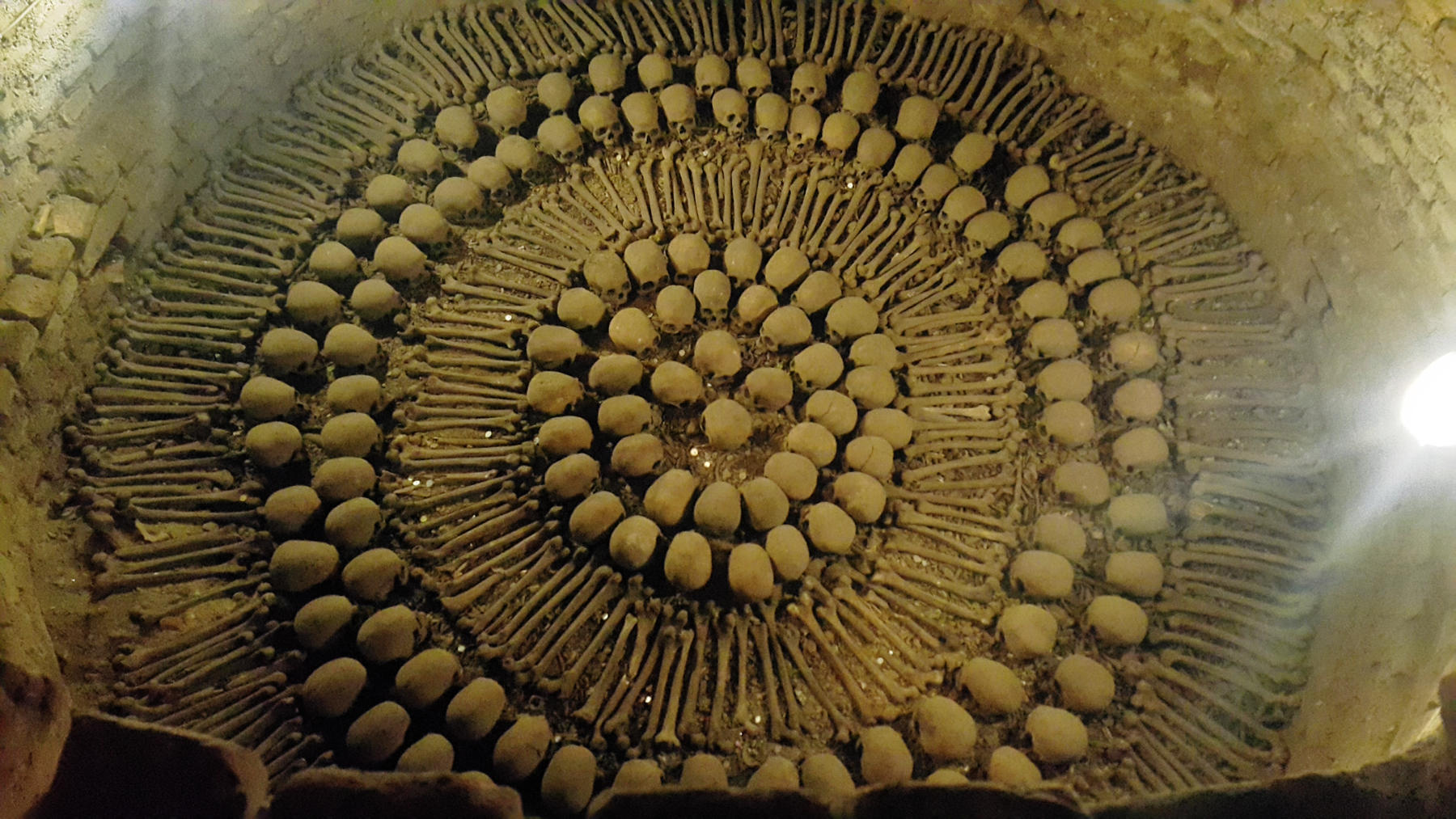 After our morning with Hernando, we visited a large, underground shopping centre called Locarmar, on the edge of the cliffs and not too far from our hotel. 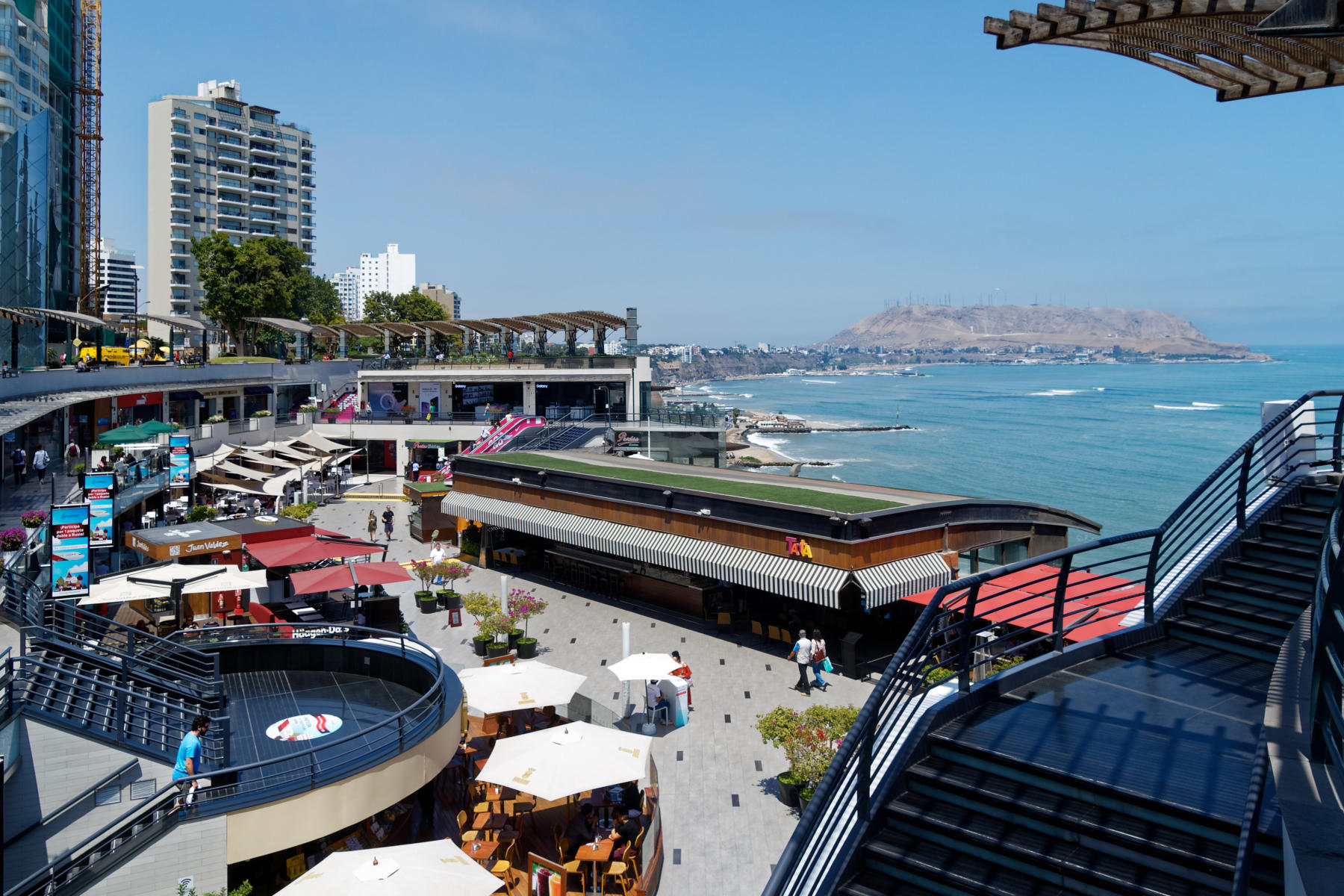 There we had a nice lunch at a nice eatery called Tanta, a place which was fairly unique in that it served no wine (but the pisco sours were excellent, and it offered local-ish Cusqueña beer, which was quite palatable); and the kitchen was sufficiently broken that they couldn’t offer the dish they described as being their most popular – lomo saltado, a beef stir-fry. But we managed to find a few local dishes that they could serve (Jaranita Criolla, a sharing dish with various appetisers and Tacutacu a la Pobre, which was fried surloin steak in batter, with a fried banana, topped with a fried egg and served on a bed of fried rice – actually very lovely but too vast to finish).

So passed our time in Lima. In principle, it would have been nice to see a wider variety of city sights outside just the colonial quarter, but it’s so difficult to get around that it’s simply not possible in a single day; but it was good to have got the historical and cultural background from Hernando, as well as his despairing commentary about the difficulty of ever finding a political leader who wasn’t corrupt, and so we were able to leave with at least a flavour of the place.

Our departure was in parts amusing and frustrating. In normal cities, to drive to an airport, you get on to the relevant motorway which leads you smoothly and directly to the departure terminal. Unsurprisngly this is not so in Lima. The official route from our hotel (the Crowne Plaza in Miraflores) to the airport, according to a search engine of your choice, seemed to be straightforward – along the coast, up a major highway and into the airport – 13 km and 30 minutes.

We did spend some time going along the coast, which emphasised Lima’s odd geography, as the city itself is at the top of a clifff that’s up to 100m high, with a long beach area at the bottom. But then our driver appeared to go off on one. If we han’t been accompanied by a rep from our travel organisation, I would have feared for my life, or perhaps just my bank balance, as we went up narrow streets, through car parks, and round the back of some very dodgy-looking estates, all the time playing the national game of traffic chicken.

Anyhoo…we got to the airport in only just under an hour, dropped our bags and headed into the departure lounge, hoping to get away from the pandemonium of landside Lima airport. All we did was move into the pandemonium of airside Lima airport, which featured a single coffee lounge with all available seats taken, and no other refreshment possibilities. We eventually were given a gate, so went there and managed to find somewhere to sit. Then a gate change was announced, so we trudged to the new gate. Then, and only then, was a flight delay of over an hour announced – and a later Cusco flight’s passengers were directed to our original gate; heaven knows what fate awaited them. Quite what byzantine processes and intricate relationship between airline and airport can lead to this particular chain of events is beyond me (mind you, it was foggy as hell outside). A further annoyance was that the delay meant my free WiFi ran out and I had to pay to stay online. Honestly, it’s shocking.