Our journey towards our next overnight stop continued towards the Krka National Park, about 90 knee-crunching minutes in the rather cramped tour bus that was ours for the day. The National Park has many attractions, but probably the best-known feature is the waterfalls. To get there we had a 50-minute walk along a flat, stony and dusty track in the scorching heat, which was surprisingly taxing. However, the track led to an area where there was shade and seating for lunch. One could also have bought beer, but that thought never crossed our minds. Oh, no. Not at all.

Lunch consumed, it was time to go to see the main act – the waterfalls (“Slap” in Croatian). Željko stressed that although it was offically possible to swim by the falls, in practice this was not a worthwhile activity, as you couldn’t actually get near to the falls themselves and also you had to share the space with several thousand people. There are, however, trails around the falls – wooden boardwalk or paved track – which enable one to experience the whole area. The trails stretch for a couple of kilometres, and it’s best to allow an hour to potter round them, particularly if one of you is a fanatical photographer.

Right at the start, you get a great view of the lower falls. I guess they’re more cascades than falls, but still it’s an impressive sight. 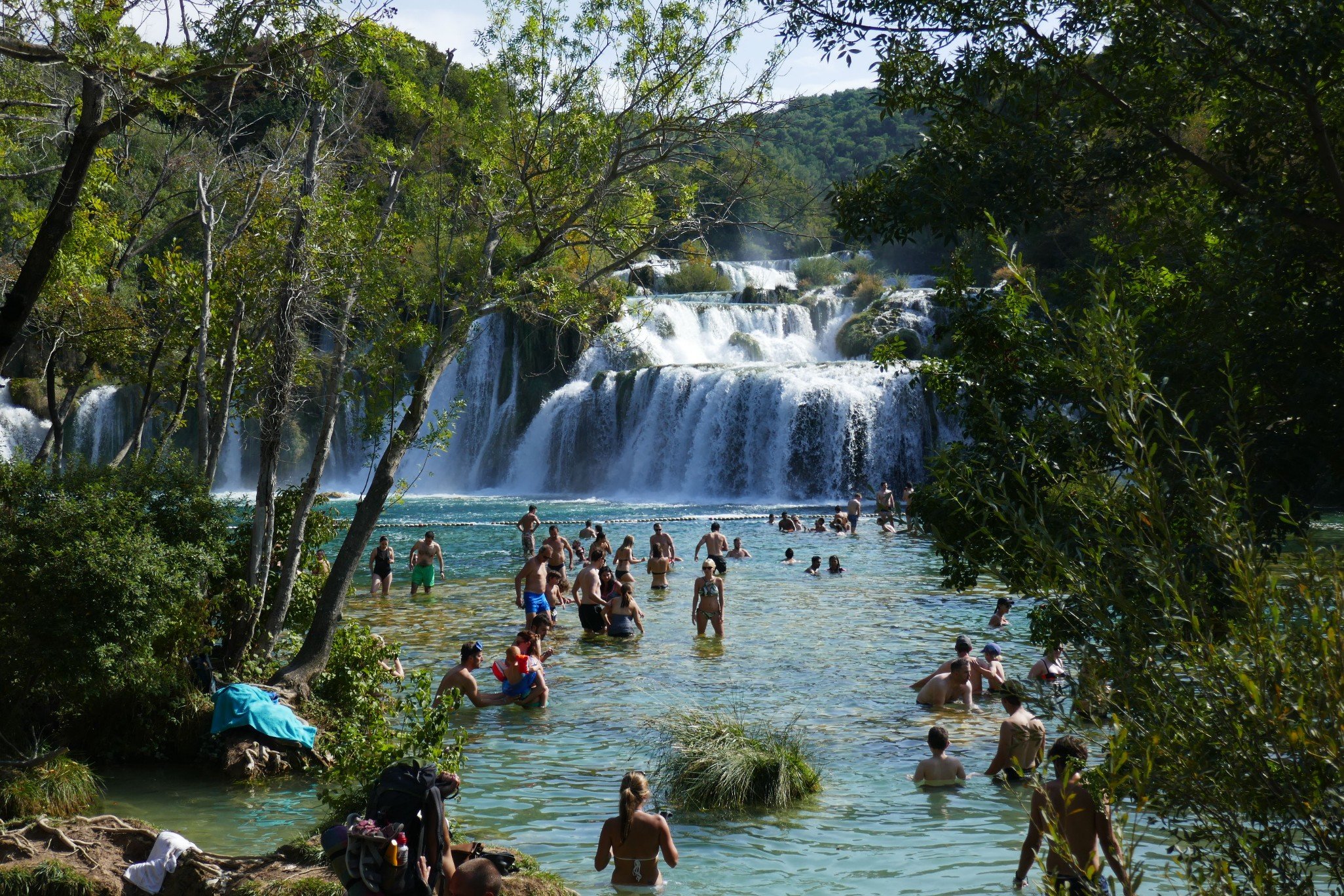 and you can see how popular it is as a bathing area. As you go round, you go higher and higher on the trail and get more views of the cascades 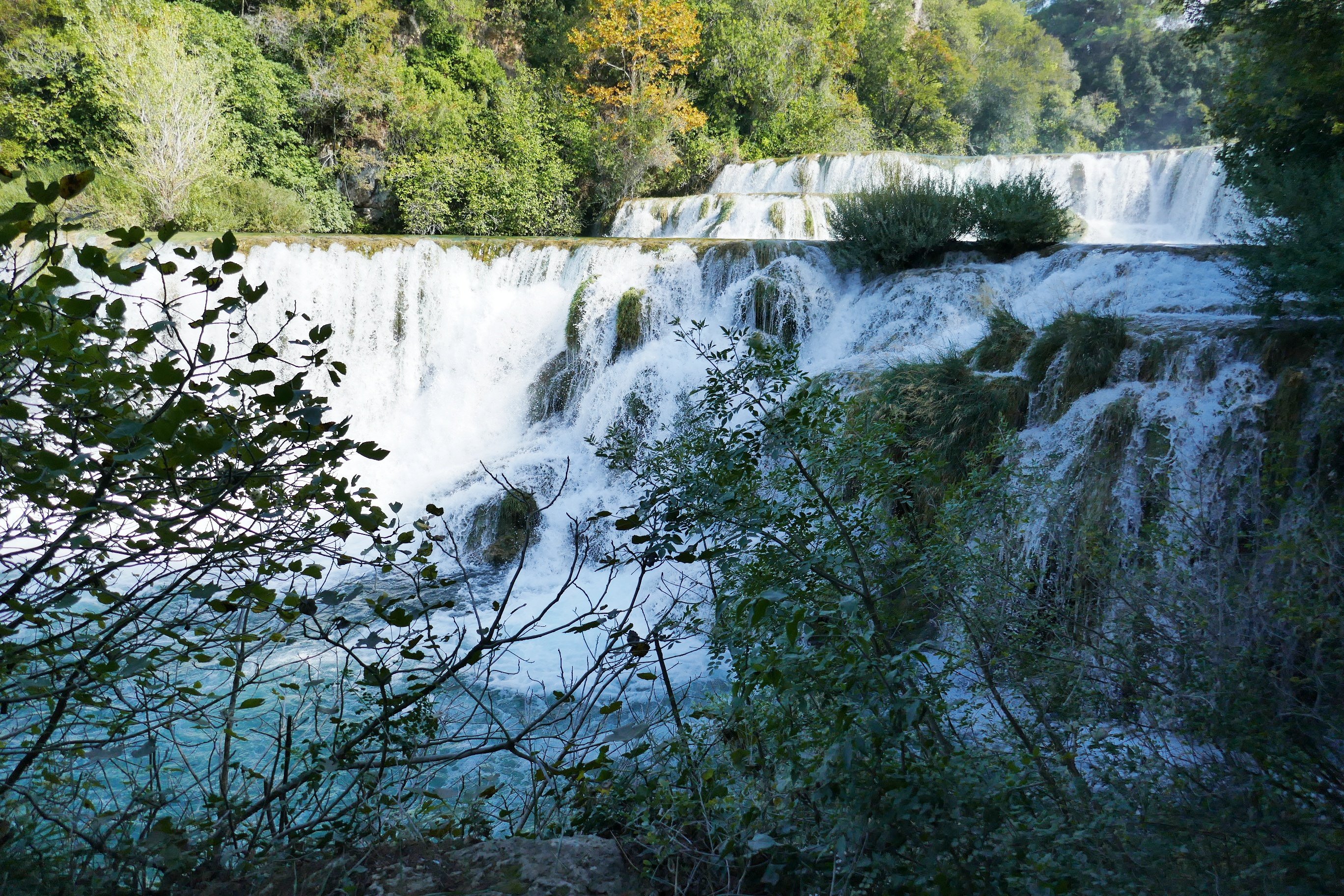 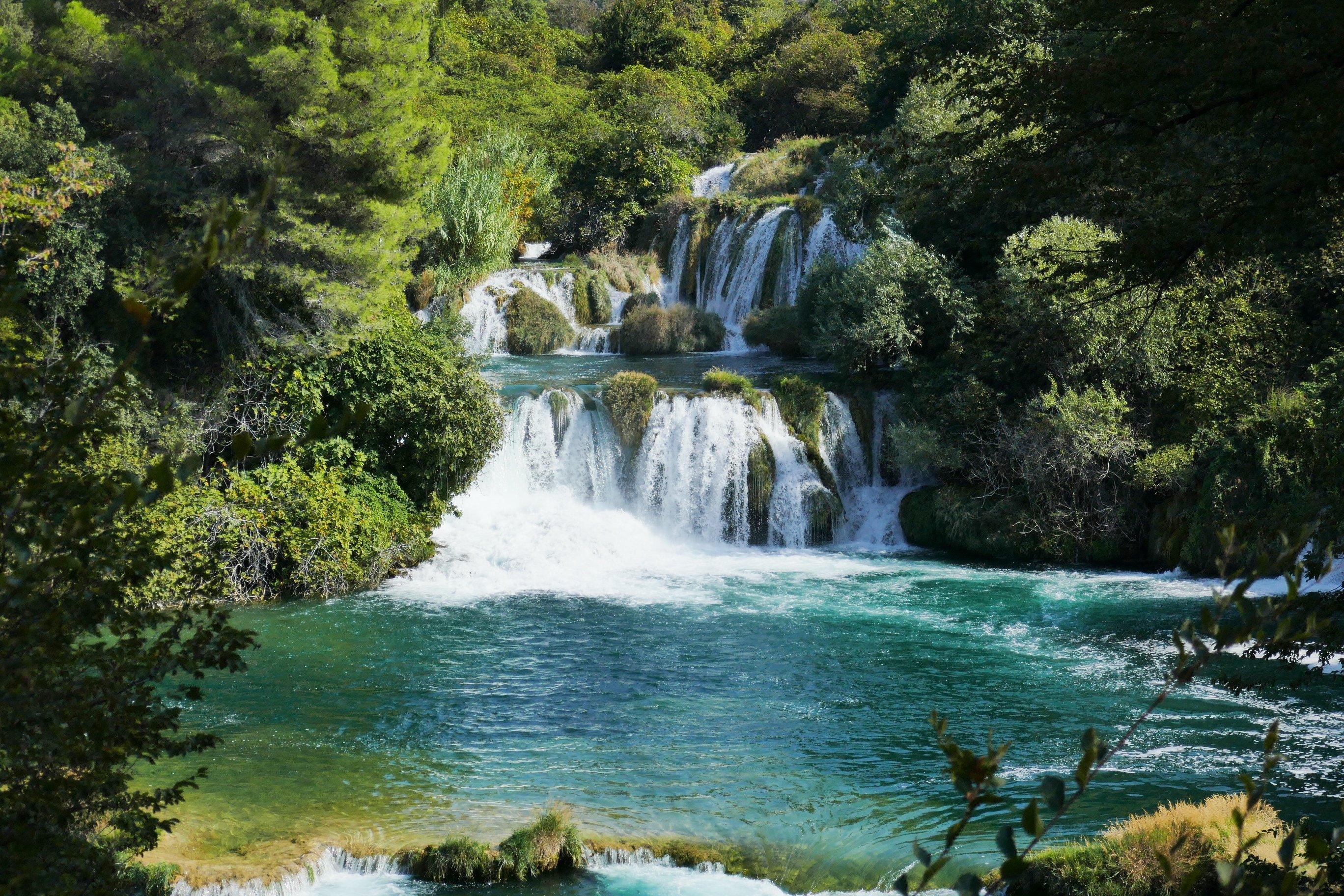 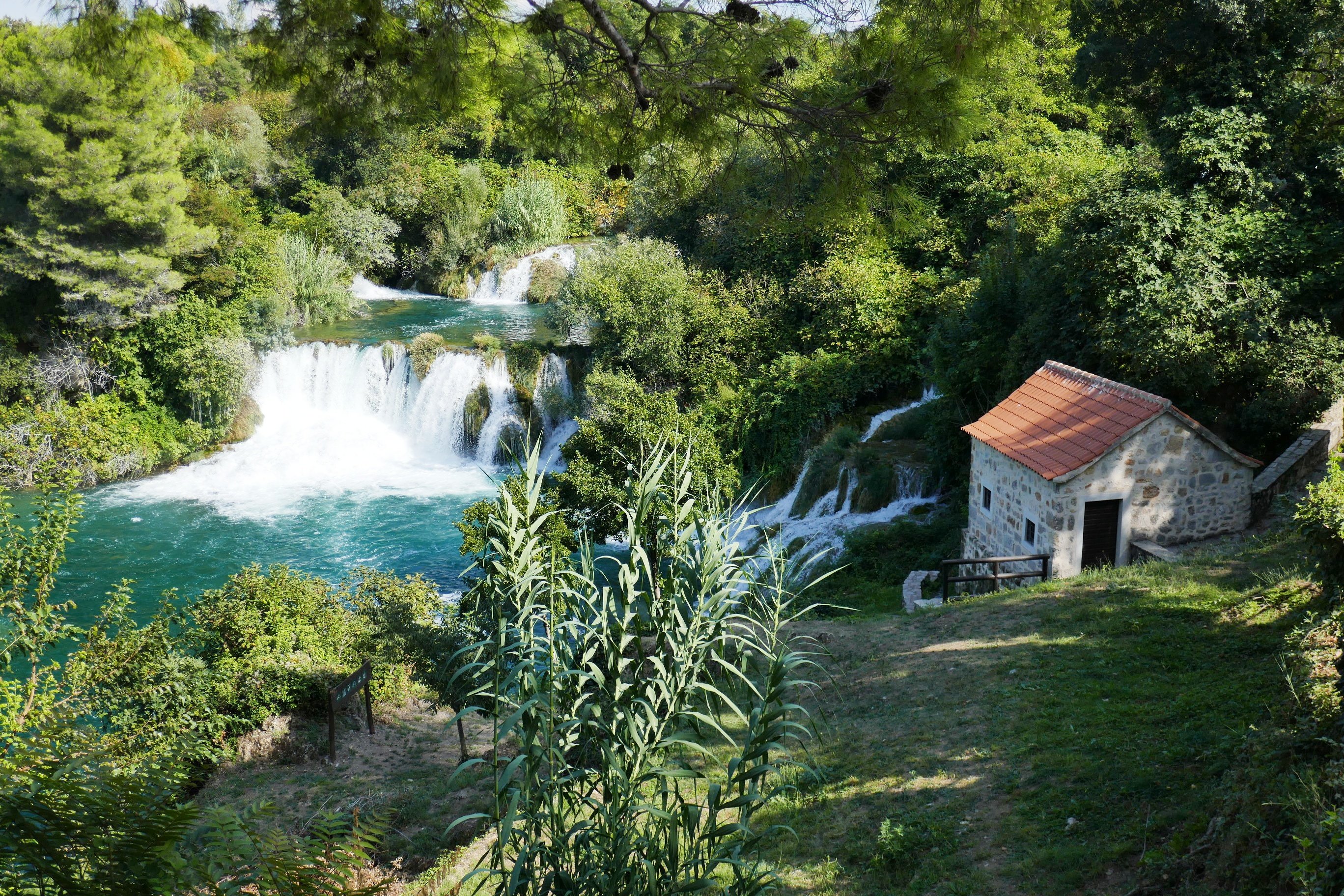 as well as various exhibits, such as this impressive piece of ironwork, which formed part of a hydro-electric generation facility that first opened as long ago as 1895. 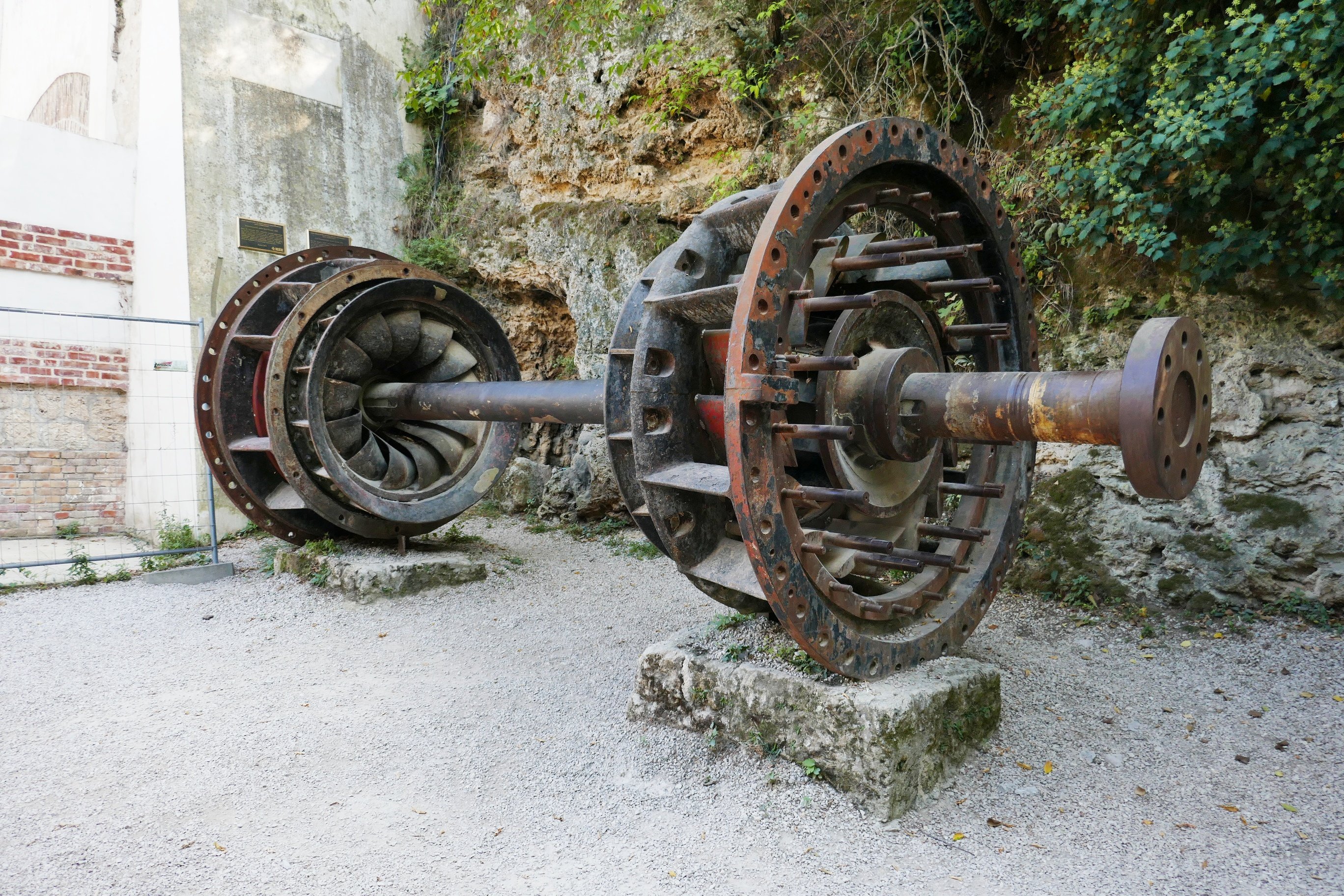 As you get to and round the higher trails, the scenery changes from the dramatic cascades to a quieter, more gentle vibe, with boardwalks taking you through areas with pools, 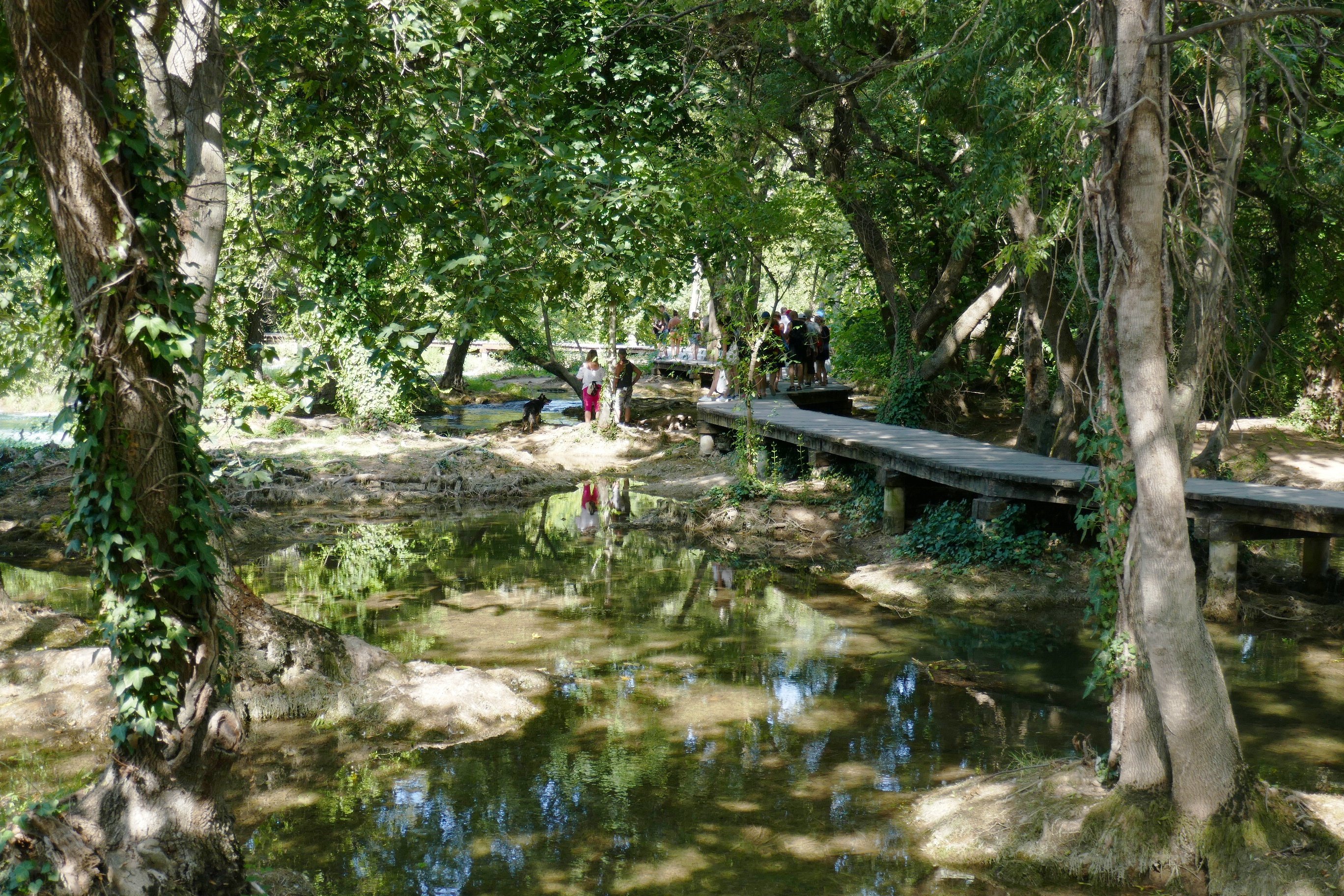 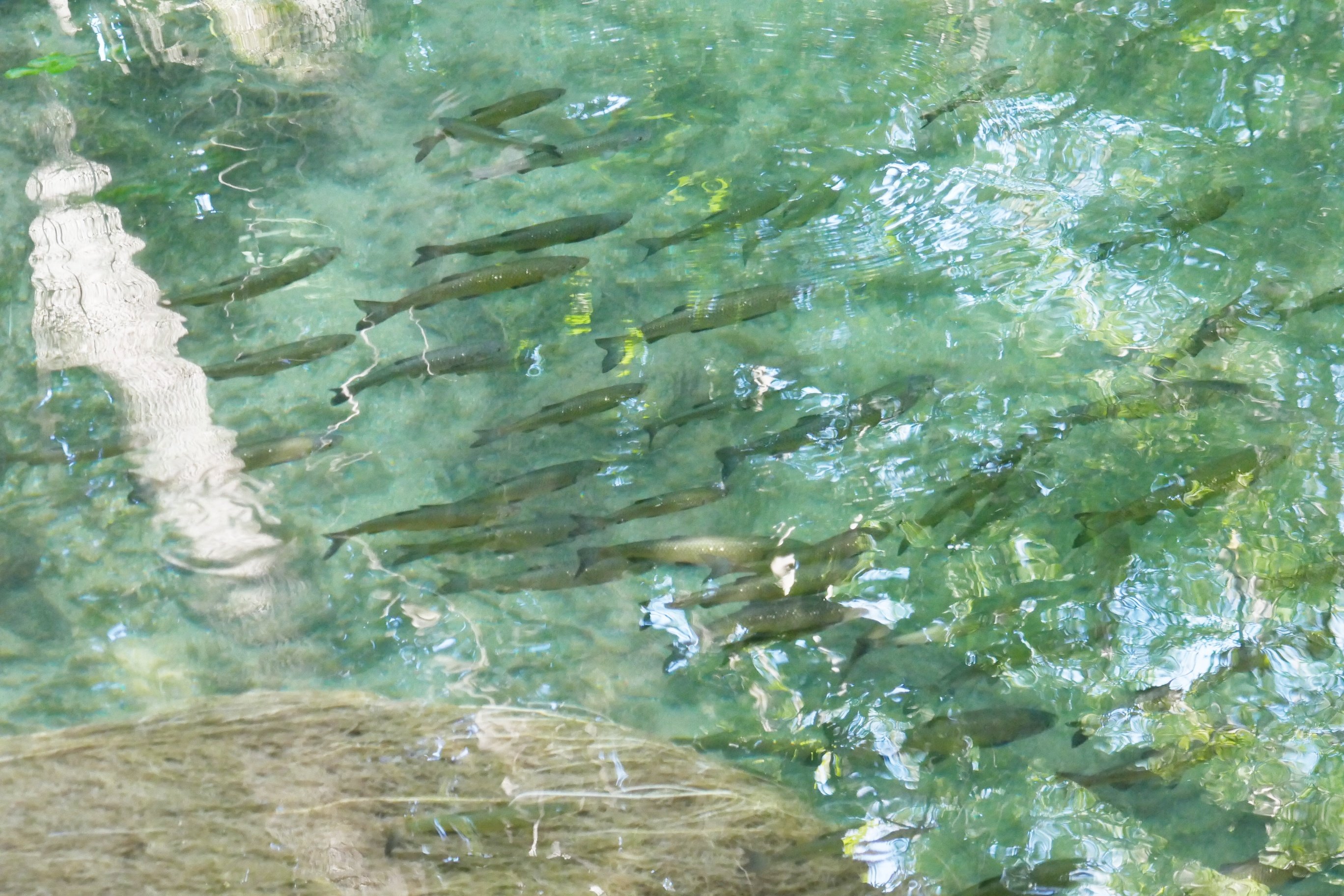 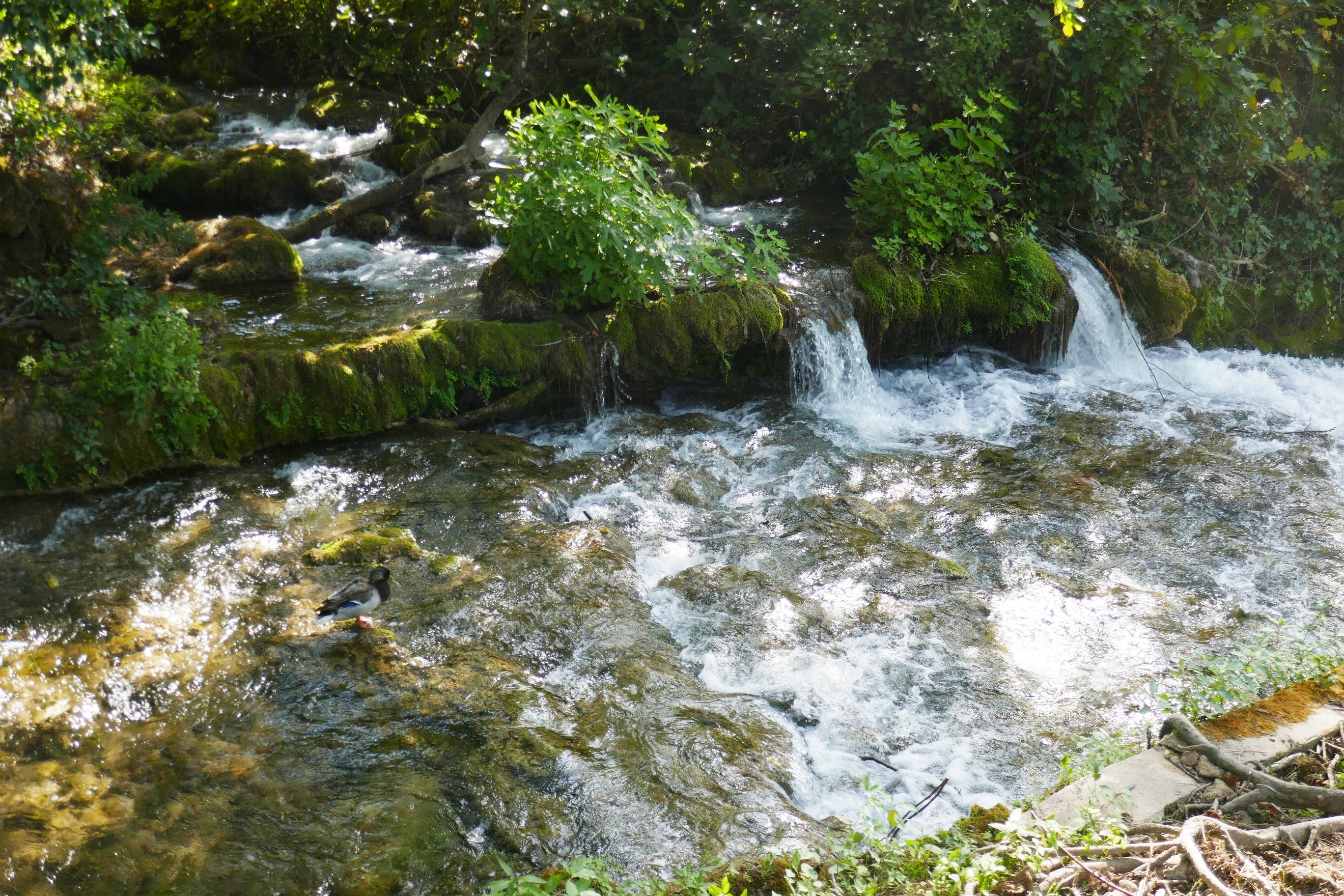 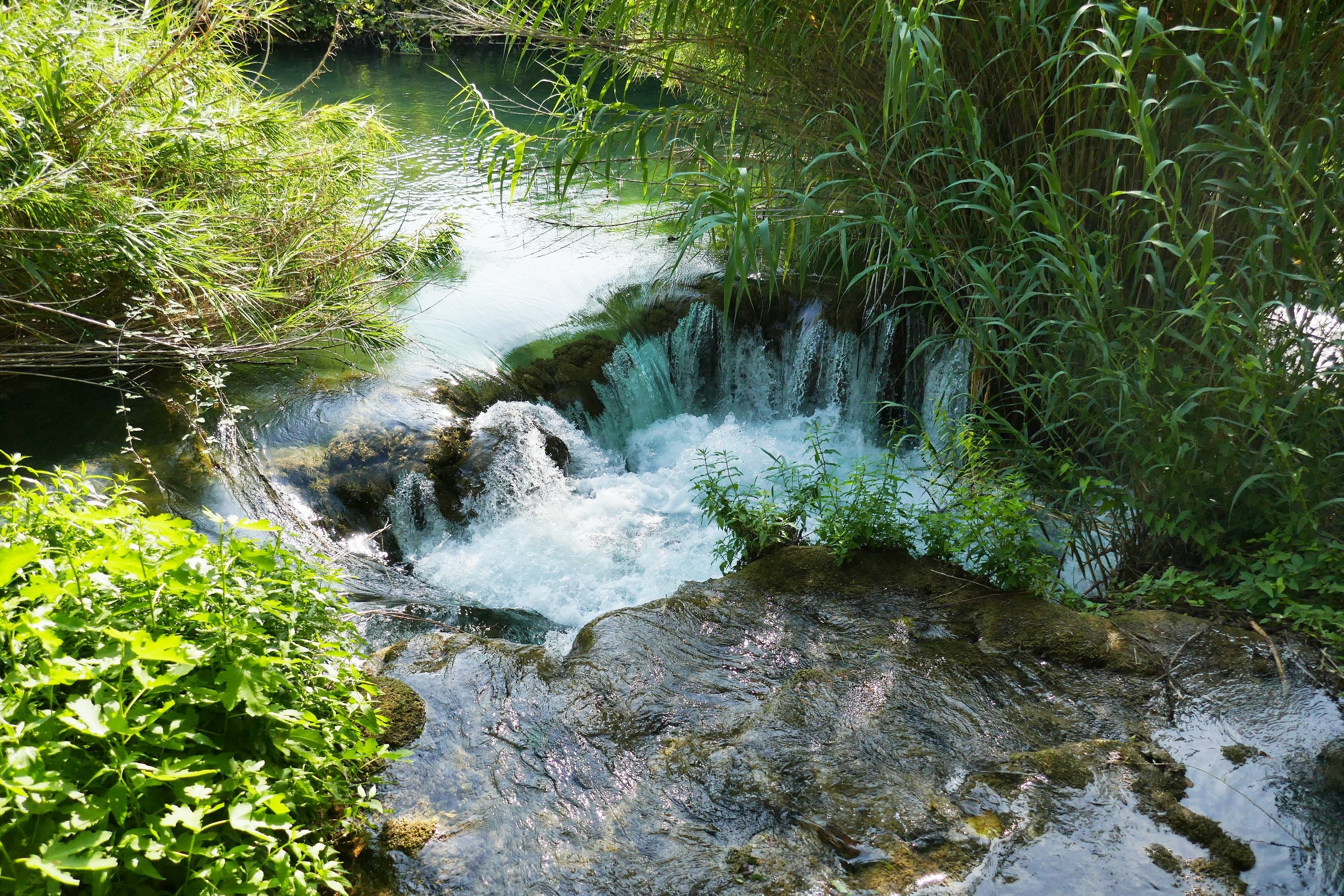 We even saw a froggy who, from the sound of him, was a-courting. 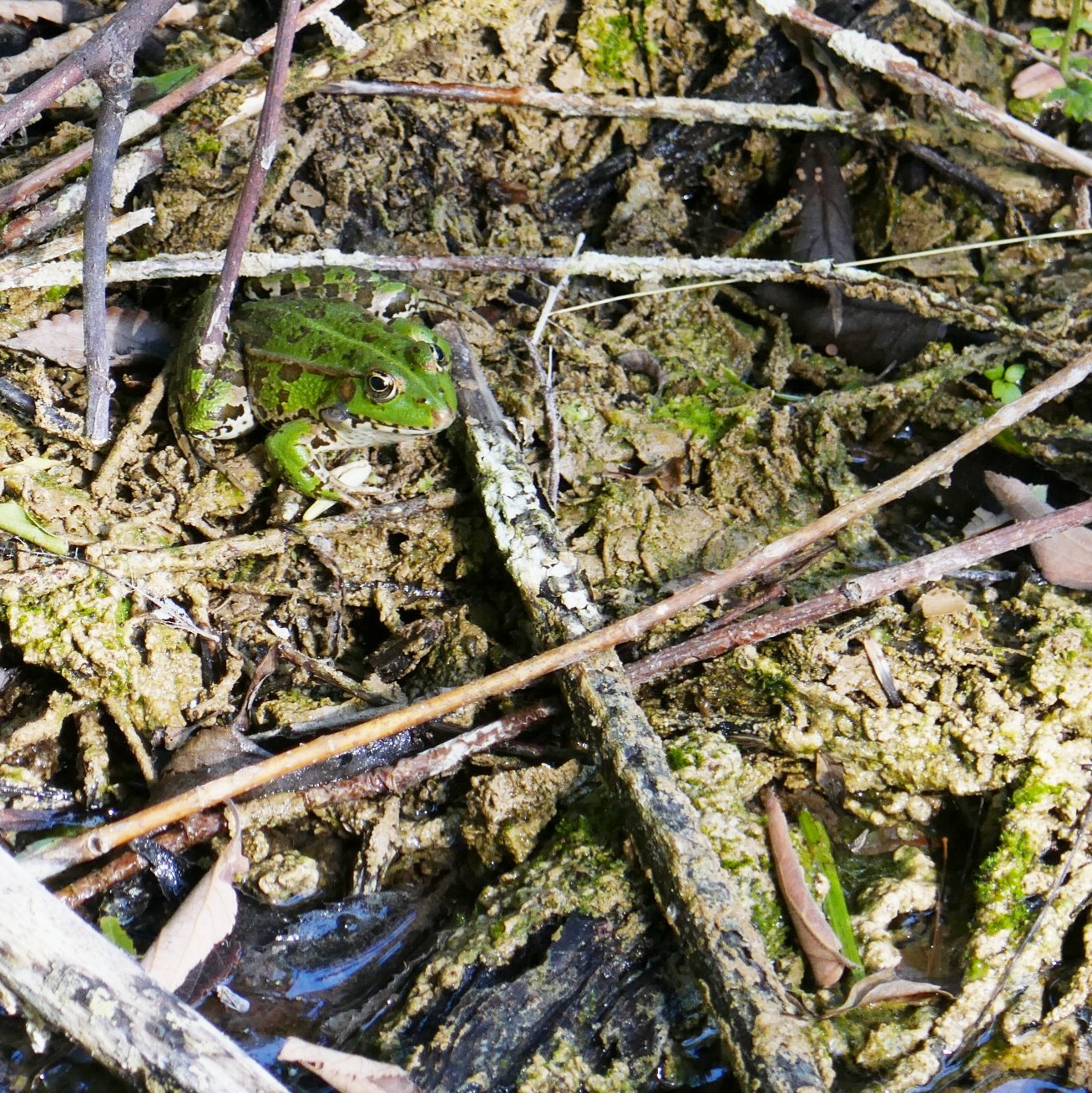 Towards its end, the trail takes you to probably the best viewpoint over the major cascades.

Fortunately, after our Krka visit, we didn’t have to retrace our steps along the hot, dusty trail, but could take a shuttle bus to where we could continue our journey – some 75 more knee-crunching minutes – to Starigrad Paklenica. Our hotel there was the “Biker-Friendly -10%” Hotel Vicko, and we were in an annex called Villa Vicko. Our room was more a small apartment, with balcony and kitchenette; more to the point it was up only one flight of stairs. We were to be here for three nights, so could unpack some stuff and relax a bit – very welcome.

The group had dinner in the hotel restaurant that evening, and reports of the food varied: Jane’s seafood risotto was very humdrum, but my tuna steak was superb. The service was a bit erratic at first, but we eventually adjusted to the style of our young waiter, Josip, and the day ended very pleasantly. We even had the promise of a relatively relaxed start the next day – 0830! – and you’ll have to stay tuned to find out how all that went.