Saturday 28 May 2022 – Rather surprisingly, the wedding didn’t prevent us from sleeping reasonably well.  Come the dawn, there was time for a final cup of Twining’s finest Earl Grey as we got up, and another with a brisk breakfast, blessedly (for me) possible as my ulcers were finally beginning to cede control of my mouth back to me.  We also got a reasonably close view of the starlings which are ubiquitous in Jordan and quite melodious.  These two were making the most of the breakfast buffet. 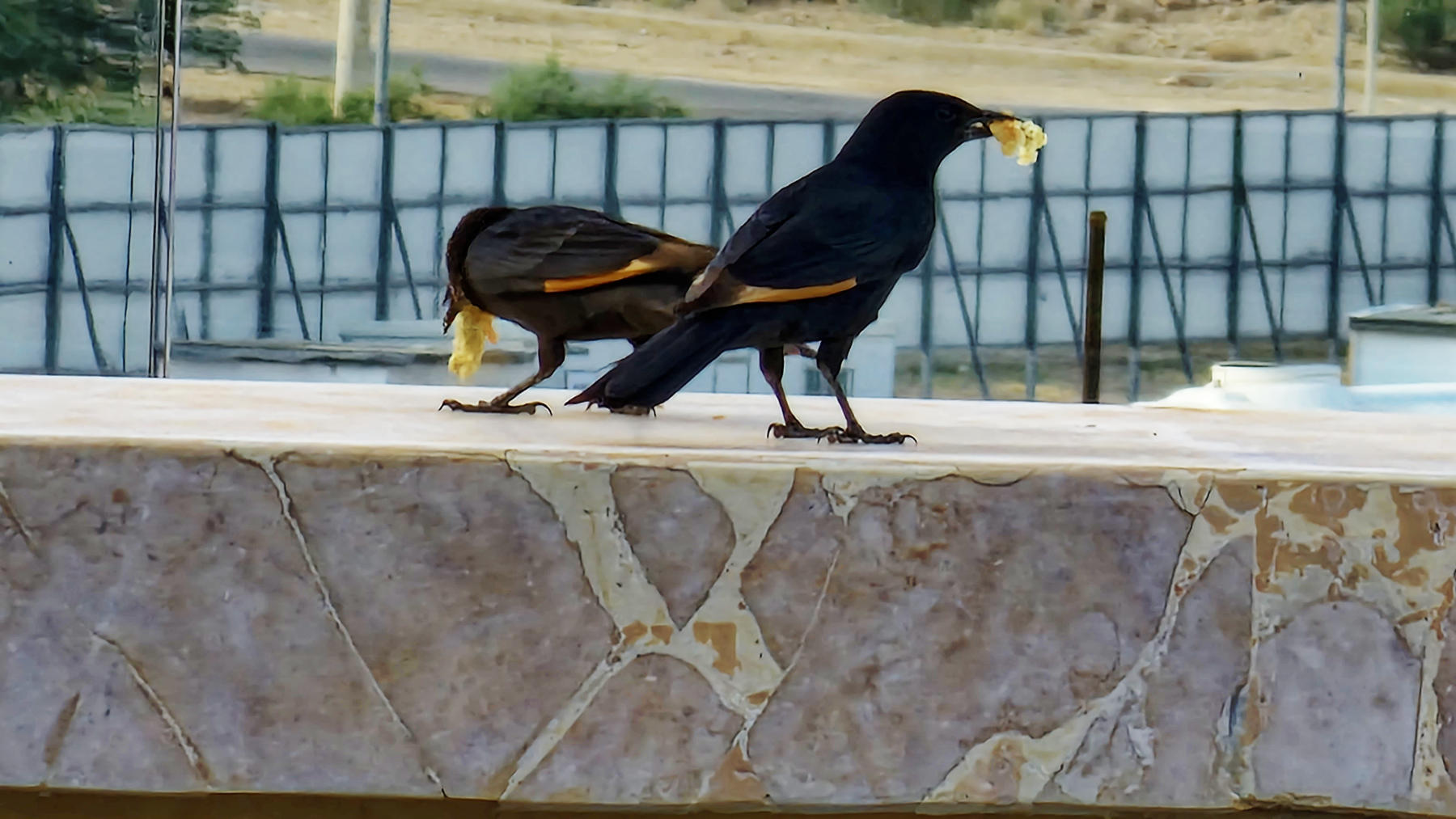 Saeed, prompt as ever, came to collect us to take us out of the Dead Sea area.  He gave us a parting present  of some olive oil soap (first experienced at Feynan – it’s a good soap) and, bless him, some local variant of sage – the same herb that we believe had caused the ulcers that had bedevilled the last few days.  However, his instructions were to serve it as tea, rather than just stuff it in your mouth, which will probably give a better result. 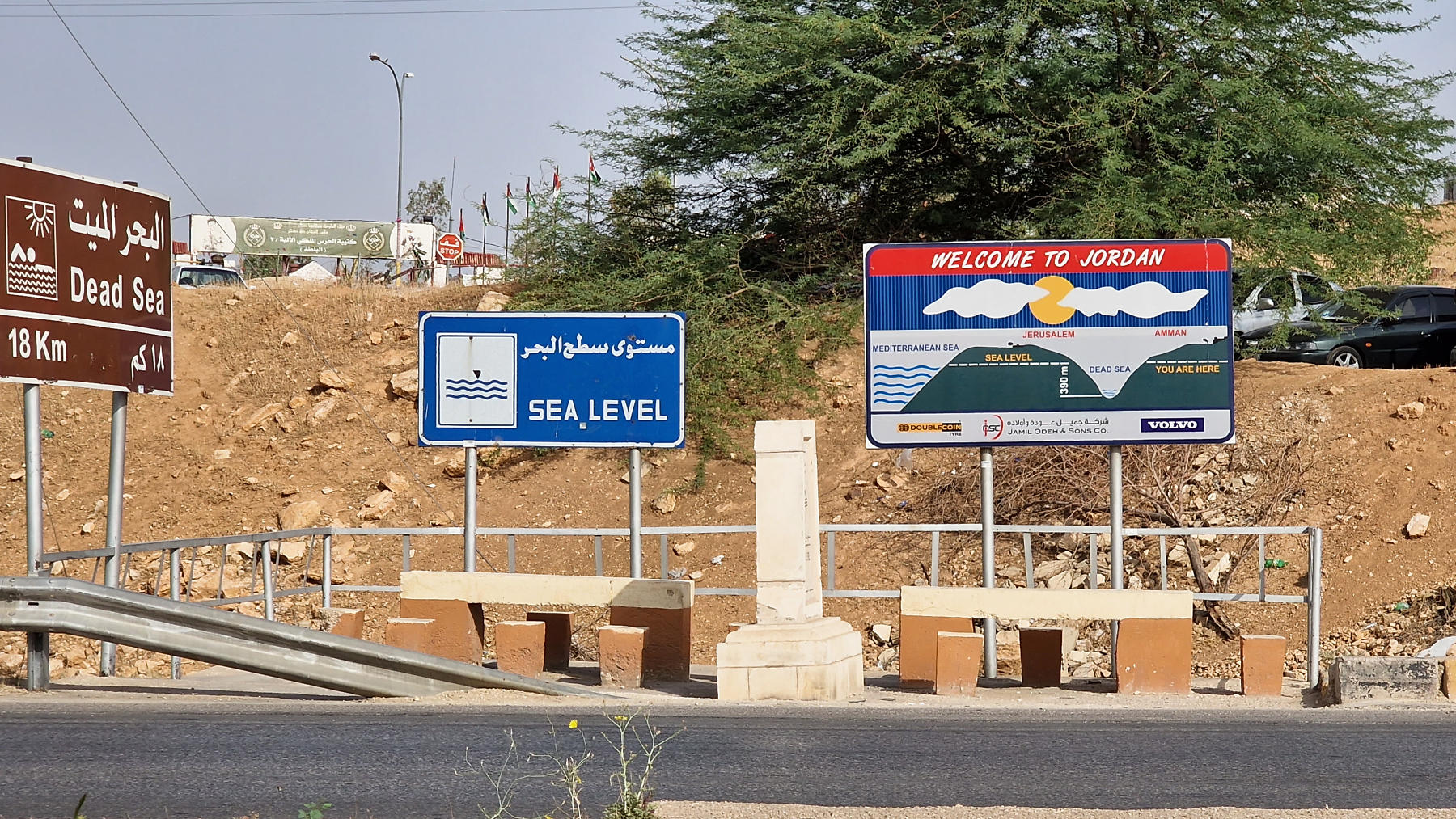 There followed a long, long climb to 600m above mean sea level (or 1km above Dead Sea level), past a ceaseless succession of big, big, heavy lorries, carrying mainly minerals from the Dead Sea area. The route goes through a very green area, fed by natural springs, and there were many cars stopped by the roadside as people took advantage of spring outlets of fresh, potable water, something that doesn’t come out of the taps in Jordan.

And then we were at the airport, saying goodbye to Saeed and thanking him for the truly excellent job he had done of looking after us for a fortnight, before coming back into the care of Edward (he who greeted us a fortnight ago, you’ll remember), which meant something of a canter trying to keep up with him as he took us to a fast-track side entrance and ushered us into the tender care of the Royal Jordanian airline Crown service.

The check-in process had much in common with the Virgin Upper Class check-in at Heathrow Terminal 3 in the Good Old Days when I occasionally managed to score this for business travel: a separate, private entrance;  its own dedicated passport control; and its own dedicated security scan. You’d have thought that the security johnnies would be familiar with ostrich eggs as a concept, given their prominent role among tourist purchases in Jordan, but Jane had a bit of a struggle explaining the one she’d bought; and they insisted on swiping both her egg and my camera for traces of explosive, but at least the chap nodded and said “good” as he handed me back my Nikon.  Nice that he approved.

(Parenthetical and post-factum note, here, penned later in the day with gin in hand. Prior to disappearing through the apparently wonderful, dedicated passport and security facilities, Edward had handed our bags over to two guys with a set of scales, checked us in with the desk and then told us to take those annoying long thin baggage tagging strips back to the two guys.  We (rather trustingly) did this and they assured us that they would handle the tagging and passing on the bags. When we got to Heathrow, being Crown Class got us off the plane nice and quickly, and the passport gates were working, so we were the first two at Belt 7 in the T3 baggage hall, arriving there by about 16.45. Some 10 minutes later, bags started appearing in desultory fashion on the carousel. These included a succession of boxes, which were picked up by various different people. Wonder what was going on?

As time ticked by, more and more people came to the belt, waited a while, eventually picked up bags and left.  Eventually, there were fewer and fewer people standing by the belt, and still our bags hadn’t come through.  An hour after the first bags had appeared, we’d just about given up hope and Jane had worked out where the “Lost Baggage” desk was – and then our bags finally appeared.  Specially labelled “PRIORITY” – and, as far as we could tell, the last ones off the plane. Harrumph! Cost us an extra tenner for the waiting taxi, as well as an unwanted surge of cortisol.

Anyway, where were we?  We were in the Jordan airport departure lounge…..)

We had to ask someone how to find the RJ Lounge, because the signposting at Queen Alia airport is less lavish than at other airports, but here we are and I need to update the blog, so an 0930 gin (we’re still on holiday, OK?) to fuel the creative flow seems to be acceptable.  Yes, it is.

So, whilst waitin’ for the Dreamliner that is comin’ for to carry us home, we’ve looked over Jordan, and what have we seen?