Wednesday 9 March 2022 –  Three days of dashing about the island (plus one of going back over some of the original workings) had left us with the luxury of not having to dash about to find multiple exciting new sites with which to dazzle our senses (and, of course, yours). There are a couple of things we’d like to do before we go, but since one of them was to go up to the top of the island (Pico de las Nieves) and the forecast was for fog up there (something I suffer from increasingly, these days), a day of leisure beckoned.

I spent much of this day of leisure battling up a mountain, and back down again (don’t ever let them tell you that downhill means speedy progress, unless they’re talking about ageing). Jane elected to stay at the hotel and drink tea.

The excellent Augustin, at the hotel reception, had given us a map of a local hike, plus  the key information that we’d need a, erm, key to get through the hotel’s fields, so I set off, armed with the map, sunscreen, water, hat and the key. Very soon after that I returned to the hotel to change my sandals for the walking boots I’d always intended to wear for the hike had not the downhill ageing process taken hold quite so effectively. Then I set out again, this time properly equipped for what turned out to be somewhat tougher than I had expected.

Quite soon after the start, and some initial intellectual exercise in connecting the map provided to the reality of what I could see, I started to rise above the level of the hotel and local houses. 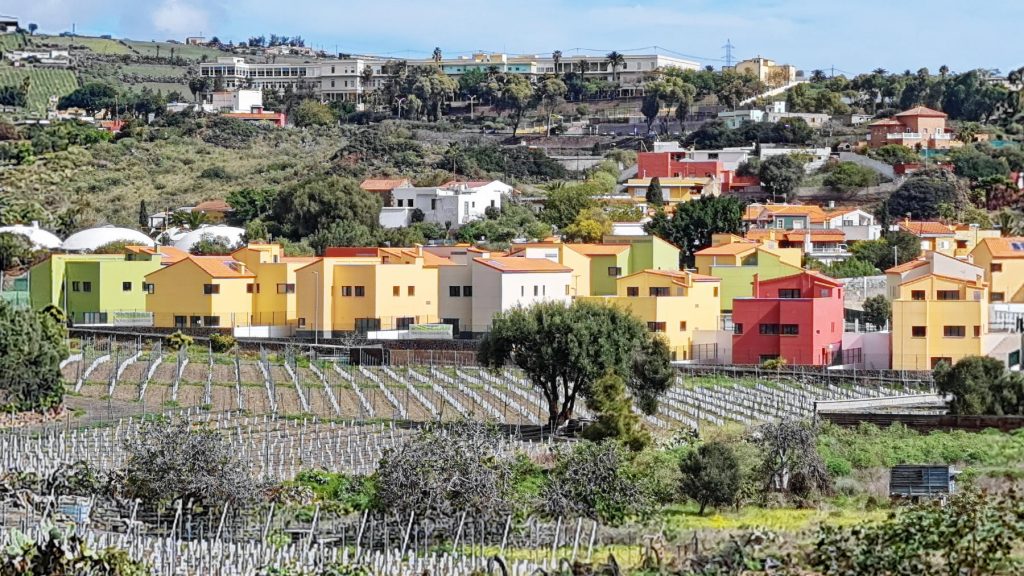 You can see the hotel’s vines in the foreground and a further ammo for the comments I made in yesterday’s blog about the “sludgy” colours of some of the buildings (you can skip down to the last couple of paras if you’re pressed for time, or have a life to live).  In the sunshine, these look quite jolly, but when it was dull and rainy we really noticed the ochre shades.

The path ascended gently through farmland (more vines, mainly) and I noticed an attractive plant, so took a photo for Jane to look at. 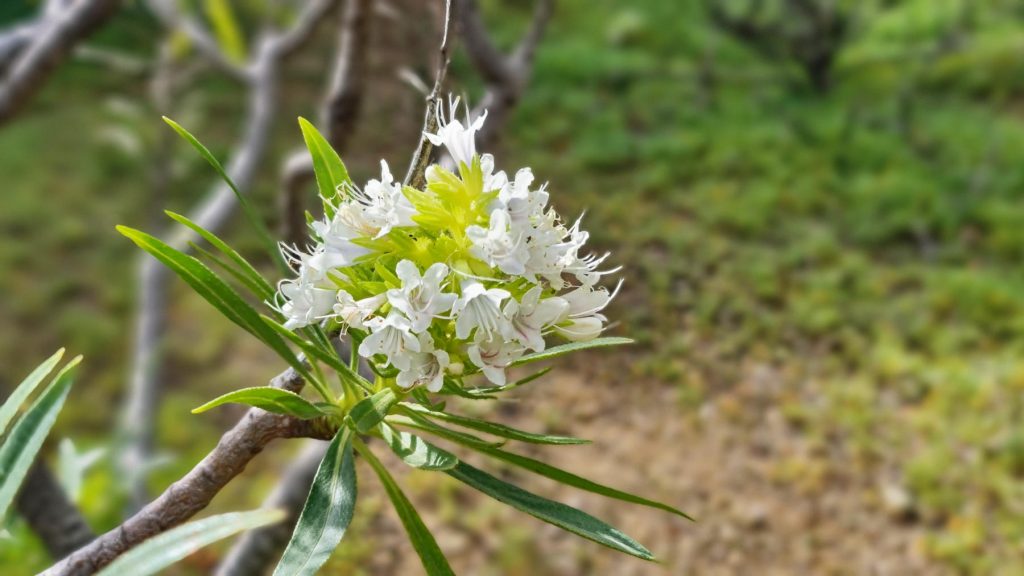 It turns out to be an Echium, which is apparently a member of the  Borage family. Yes, it’s an in joke.  If you don’t understand, just read on; nothing to see here.

All of a sudden, the gentle ascent started to be a bit steep 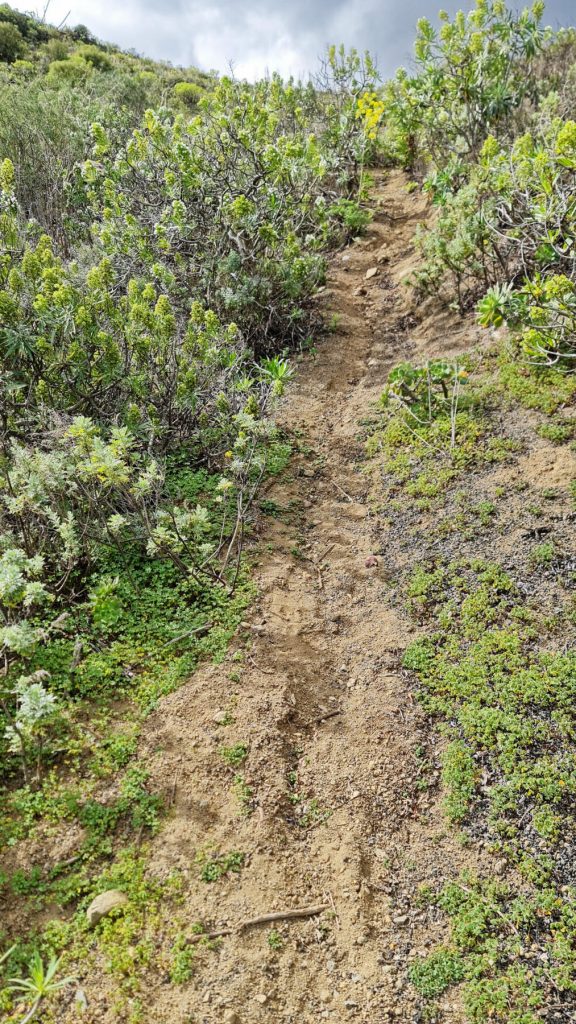 and it jolly well stayed that way right up to the top, I may say. At one stage I paused to take a photo (not a breath, oh, no) which seemed to show a slope similar to the one I was toiling up. 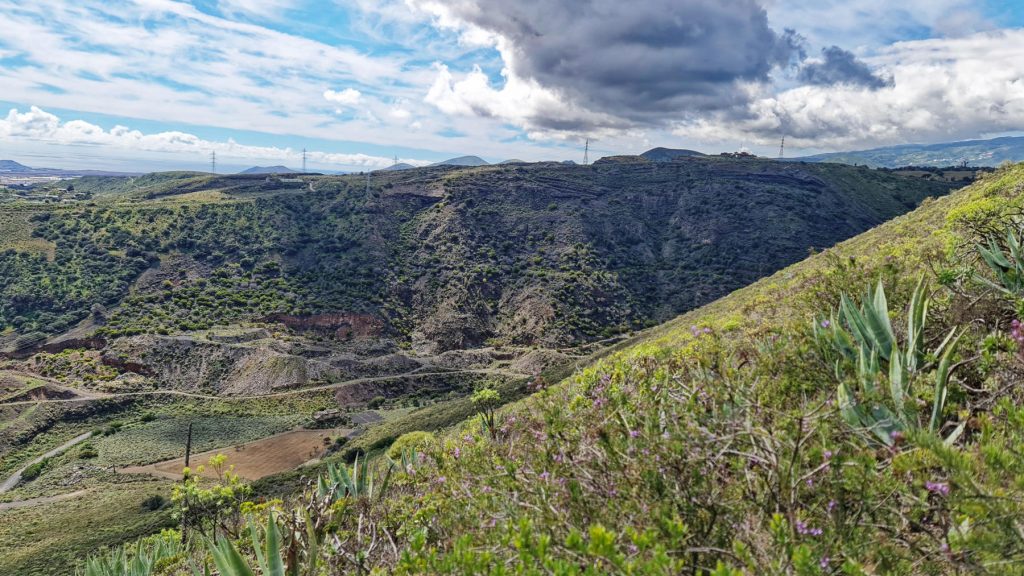 It may not look much to you, languishing there with a cocktail in your hand as you read this blog with a slight smile twisting your lips, but it looked fucking steep to me as I toiled up it.  I approached what I thought was the top 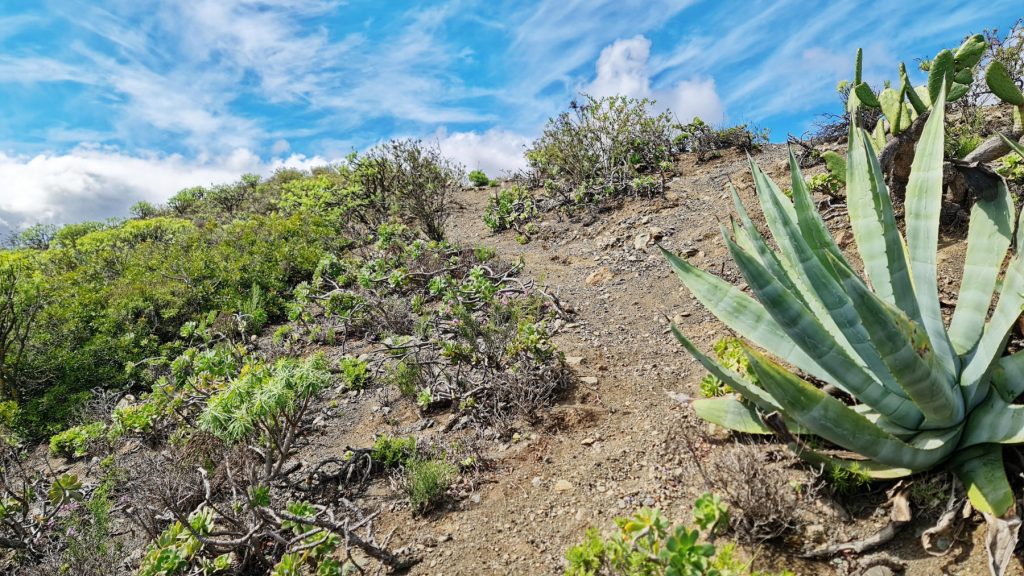 only to find that cruel fate was laughing at me and I had more uphill terrain to conquer.  But conquer it I did, and the views back down the valley were quite rewarding. 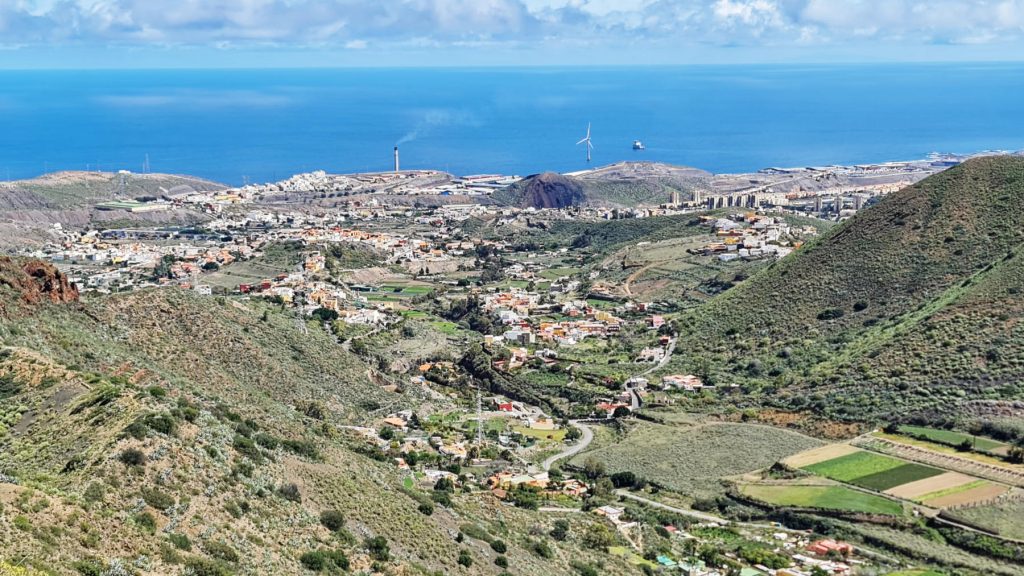 I was by this stage on the edge of a caldera, a volcanic crater, and, as one might expect, this was also quite a spectacular sight.

If you look carefully at the top left of this picture, you can see evidence of the oldest golf club in Spain, 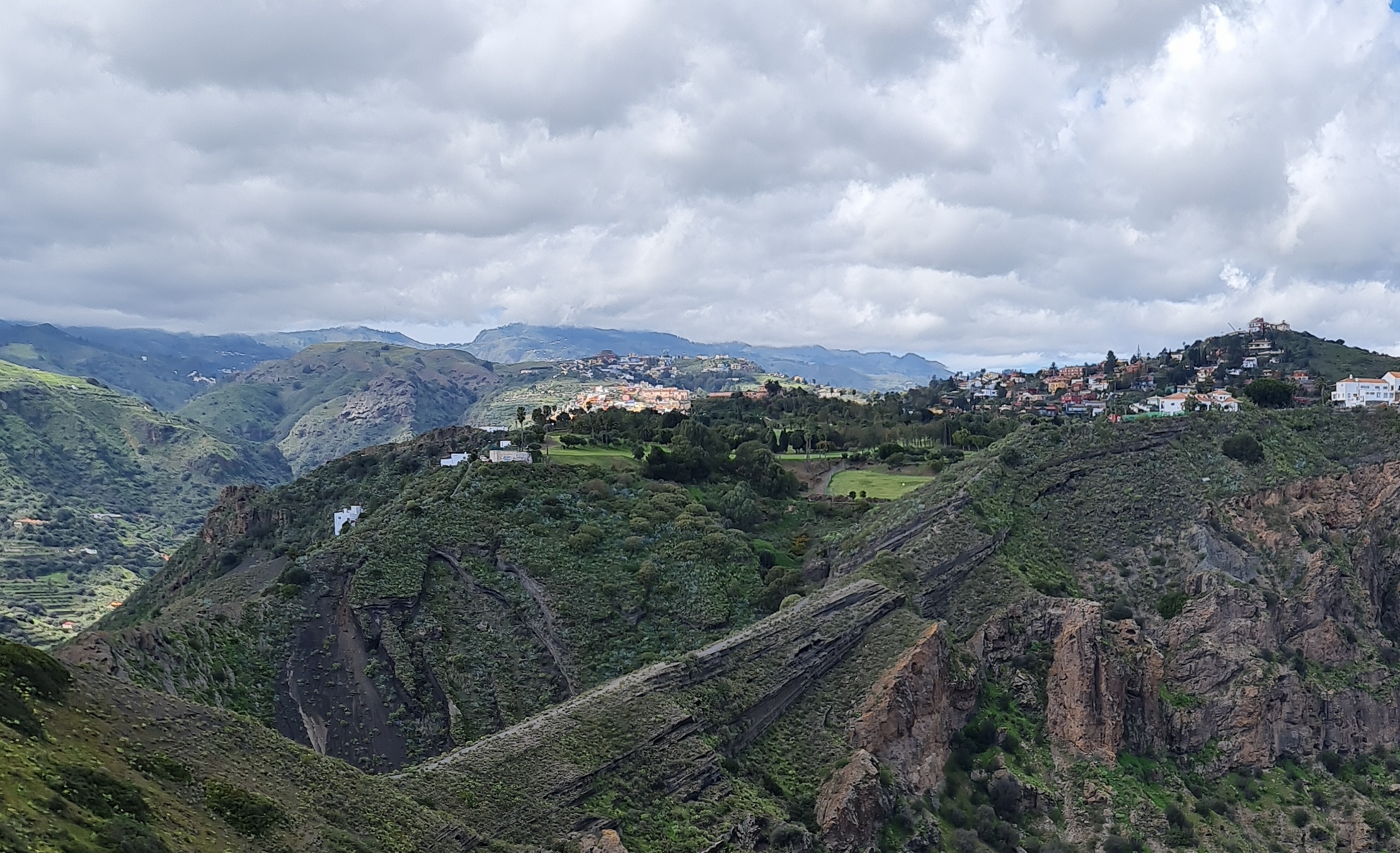 Real Club de Golf De Las Palmas. Really. Founded in 1891 to cater for the English tourists of the day, apparently.

(I actually spent quite some time waiting for some sunshine into the crater.  Although the clouds were moving rapidly, they weren’t uncovering the sun; I suspected that the clouds themselves might have been caused by the very hill that I was standing on.  For amusement, I recorded the cloud’s movements. Please note that this represents ten minutes of watching the shadows. Just wanted you to understand the extent to which I suffer for my art.)

There were paths along the lip of the crater and I pottered about on them for a bit, appreciating the view, and working out whether to carry on up to the top of Bandama. 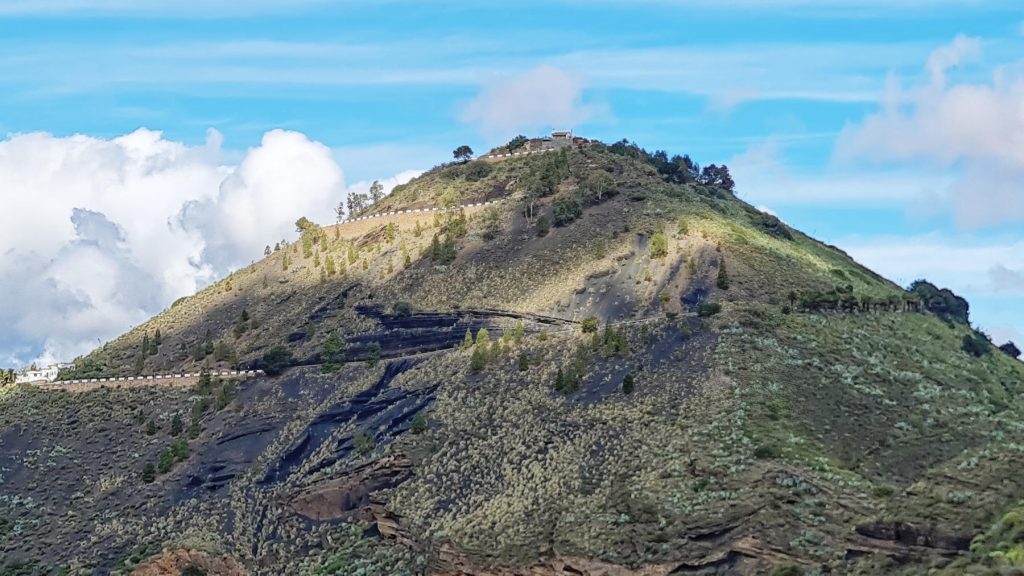 you can see that the final bit of the route to the top is simply a spiral round the peak, and this is actually a road, which wouldn’t be too rewarding to walk on.  That, and the fact that I’d used up nearly all my water, and wasn’t sure about whether spending the next three hours getting up there and back was a good idea or not, persuaded me to limit my ambition.  So I started down again, but not at all at high speed.  The going was steep and over slippery, gravelly paths.  Going up was hard work; going down was a little nerve-wracking, as a fall would certainly be annoying and possibly serious. Anyway, I made it down, back to the gate into the hotel vineyard. 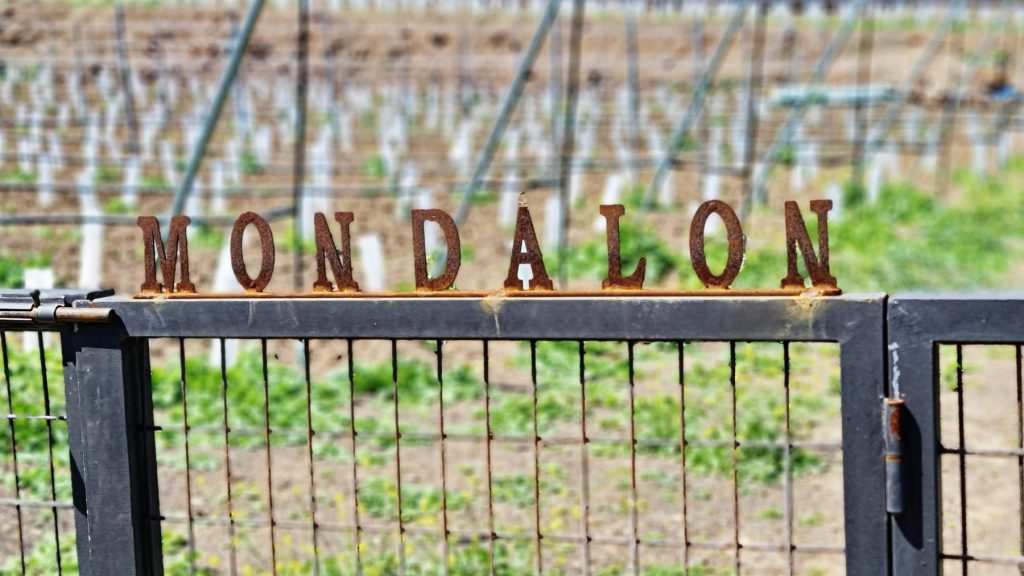 I arrived back just in time to go for lunch in the hotel’s restaurant.  Those of you who have been paying attention will remember that we lunched there on out day of arrival, last Friday, and were not particularly impressed, so we thought that we’d try again in the hope that it would be better.  And, frankly, it wasn’t.  I was fortunate in that my food was very good, but Jane was left unimpressed with hers and aspects of the service were really not up to the spec one would expect of a destination hotel.  I did try the hotel’s own wine 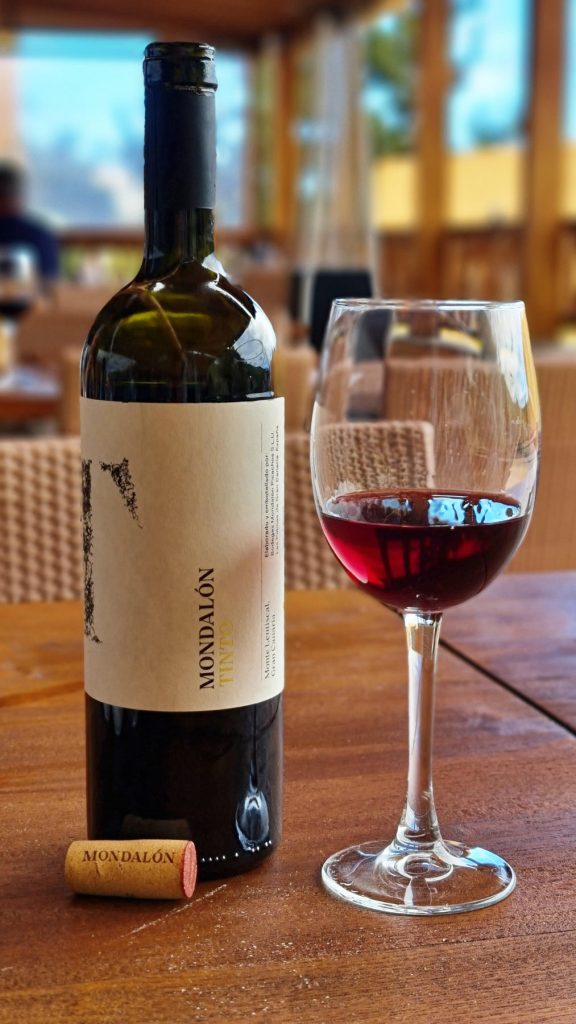 and it was pretty good.  It’s unusual for me to drink wine these days – this was the first wine I’d drunk in three holidays in Spain over the last two years.  While I enjoyed it, it left me feeling a bit more bleary than the equivalent hit of gin would have, so I shall continue to avoid wine for the time being.

However, there’s still half a bottle of it left, and it won’t drink itself; Jane won’t help me, so I shall have to man up and take on the task of ensuring it doesn’t get poured down the drain.

We have one more full day here before travelling home on Friday; the weather auguries are favourable for a clear day in the mountains tomorrow so we may well take on the twisty roads once more and head up to Pico de las Nieves en route to exploring some more of the north of the island.  Come back and find out if that’s what we did, OK?