Friday March 11 2022 – The day started with the usual mixed feelings; sad to be leaving, but with a sneaky feeling that it might be nice to be home again after two splendid weeks away.  Read on to see whether that latter hope was actually realised.

We checked out of the hotel, having given the excellent Augustin at reception our feedback on the restaurant (which, by the way, he seemed to be in agreement with).  Then, since Jane hadn’t done the hike up Bandama, the local volcano, that I had enjoyed, and since there was a road available to its top, we thought we’d spend a few minutes driving up to take a look. It’s a drive with its own idiosyncrasies. 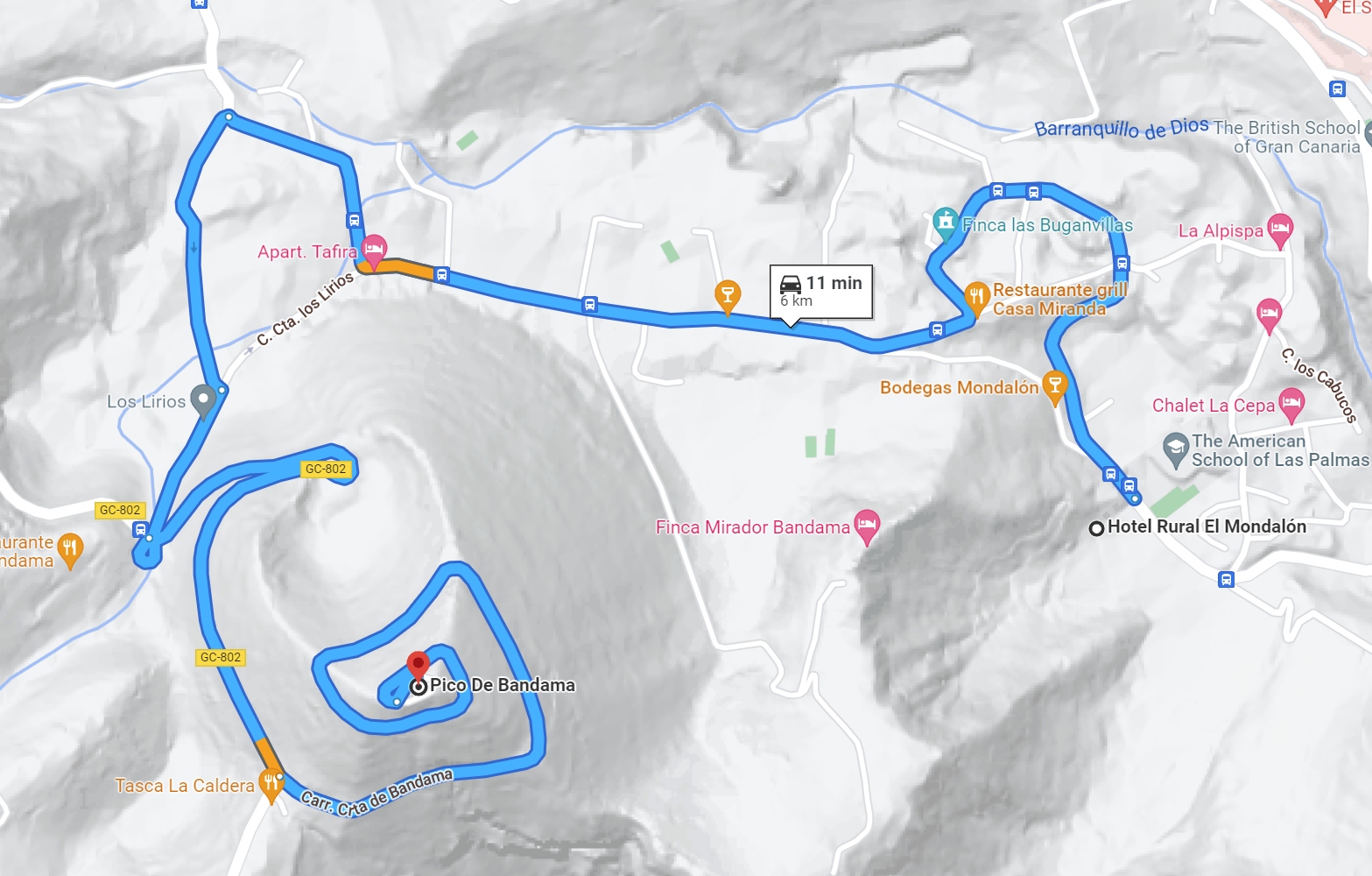 We made it without actually crashing in any significant way, and went right up to the mirador to look at the view. 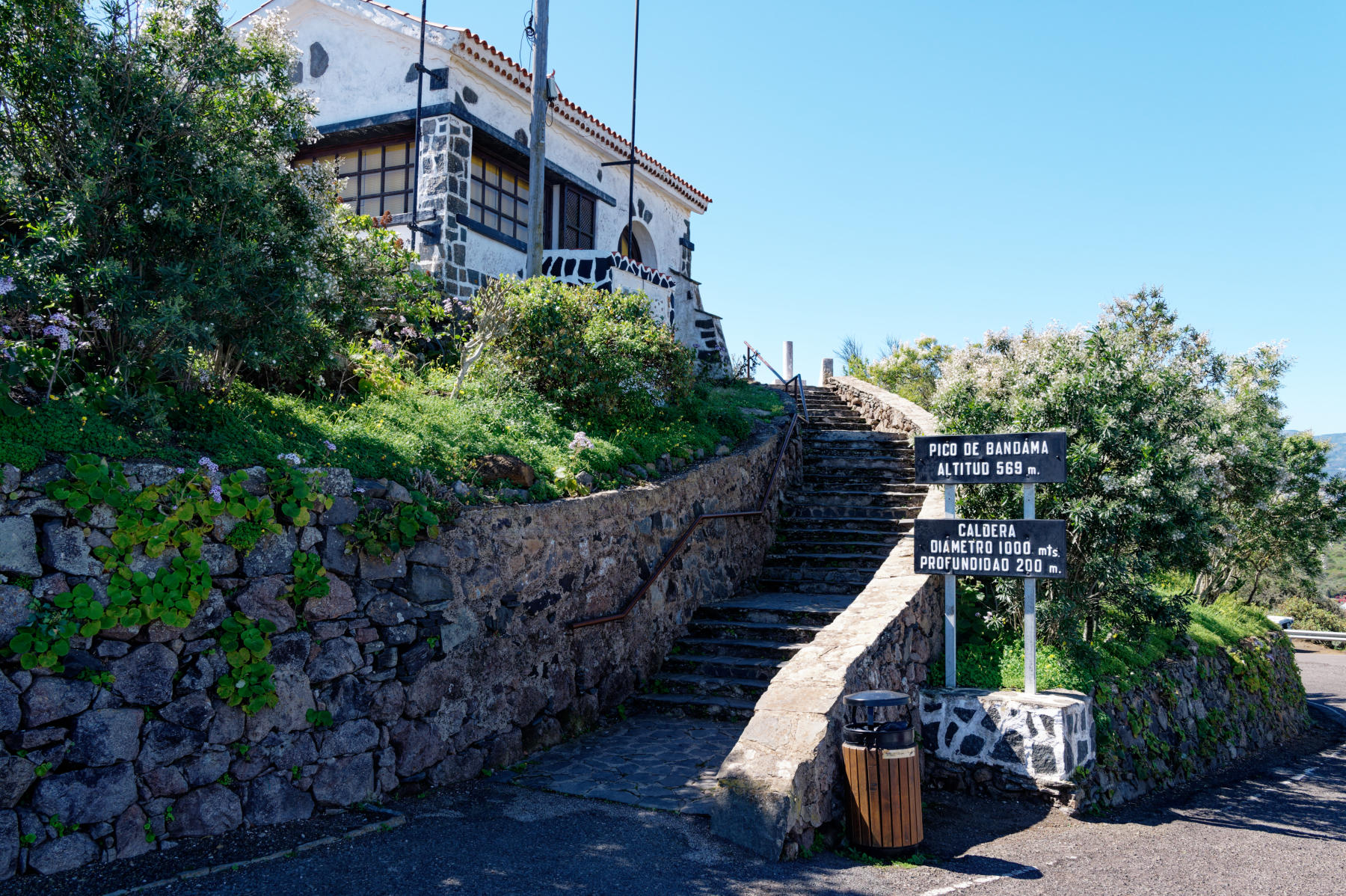 In one direction, it’s a great panorama.

In the distance, towards the right of the photo above, you can see the island’s capital, Las Palmas, and the peninsula of La Isleta beyond it. 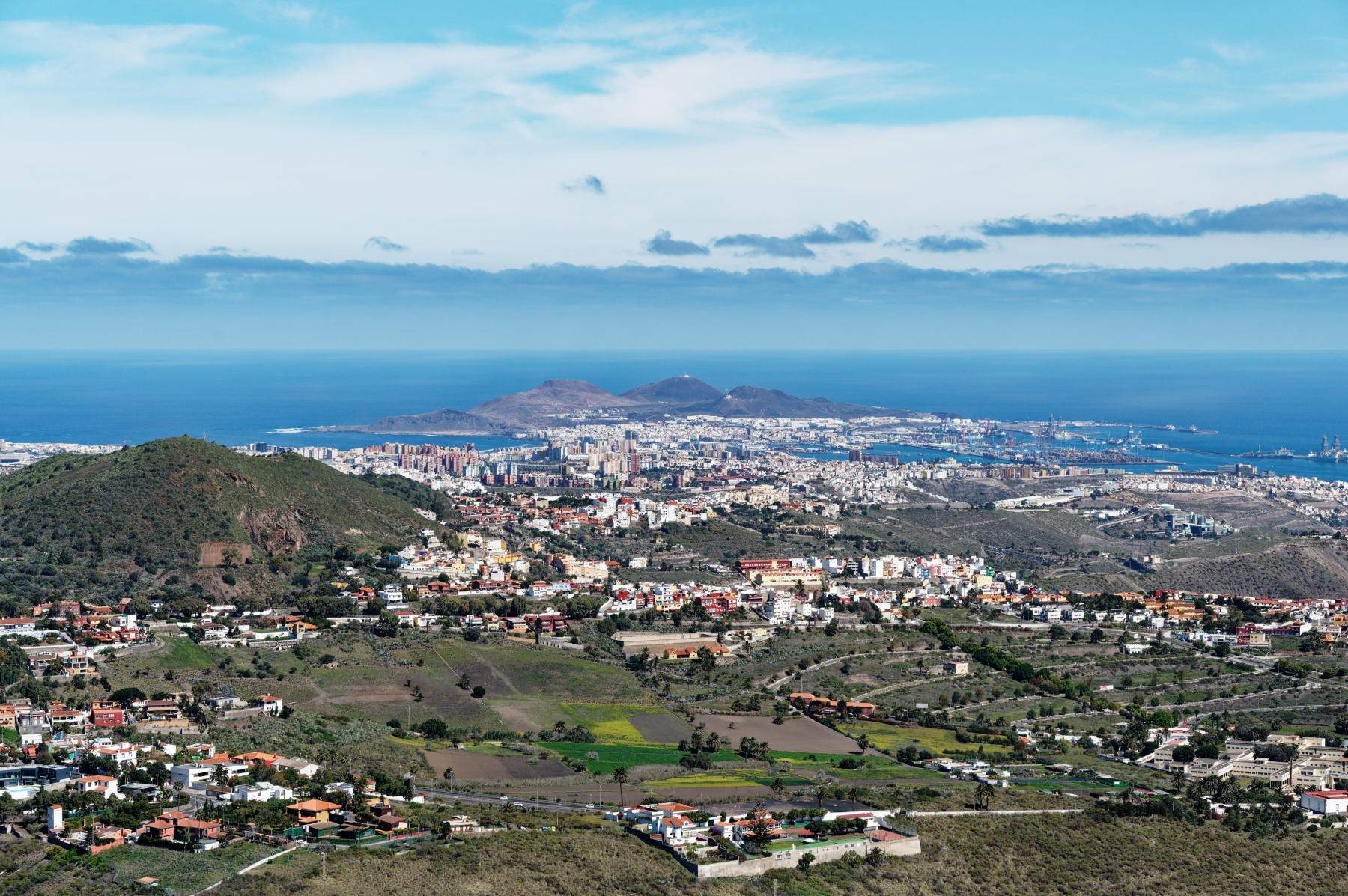 Walk round to the other side of the mirador, and this is what you see; 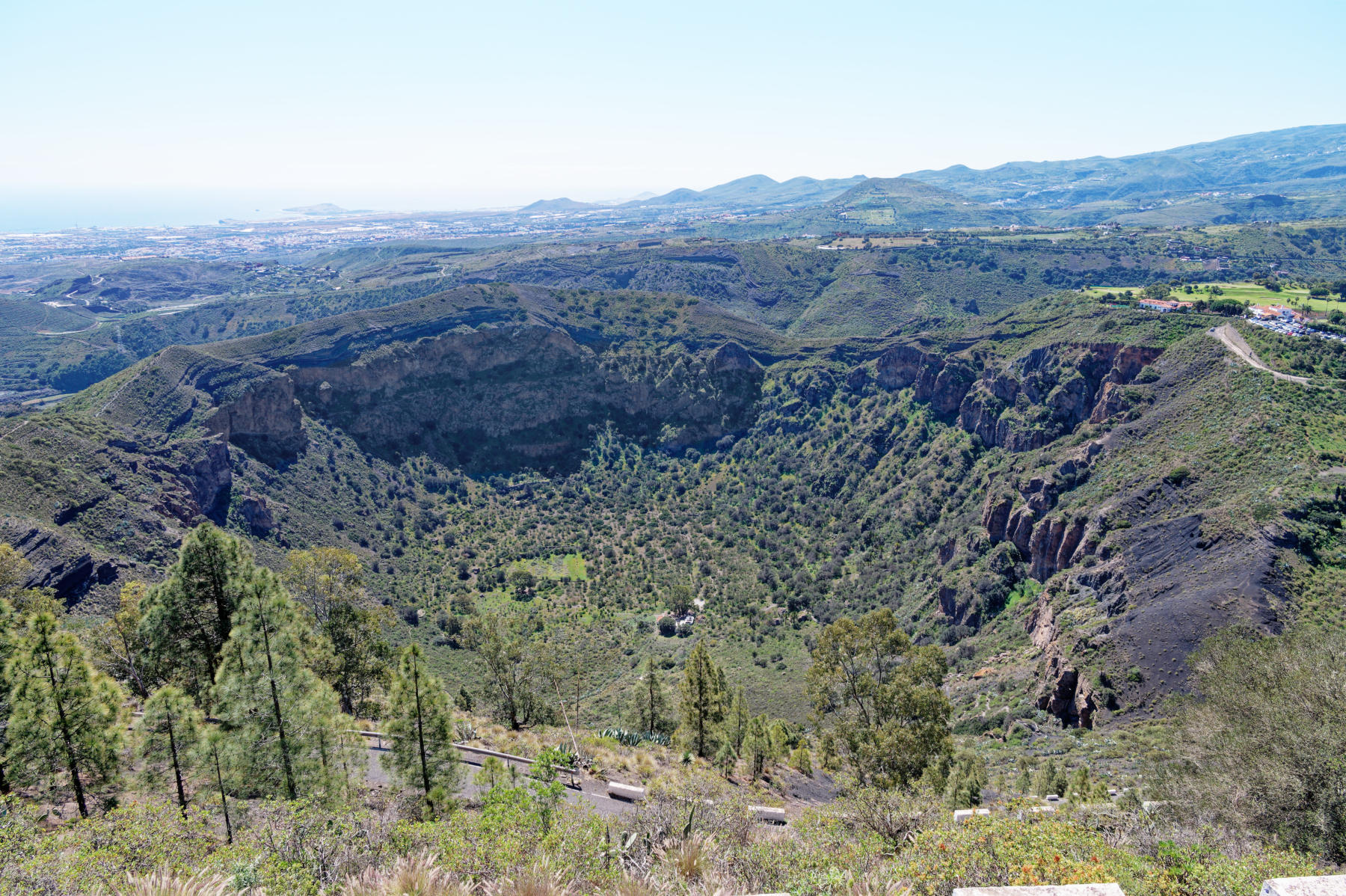 further proof, were it needed, that you can put a golf course on the side of a volcano. This is the same crater that I saw during my hike of a couple of days earlier. 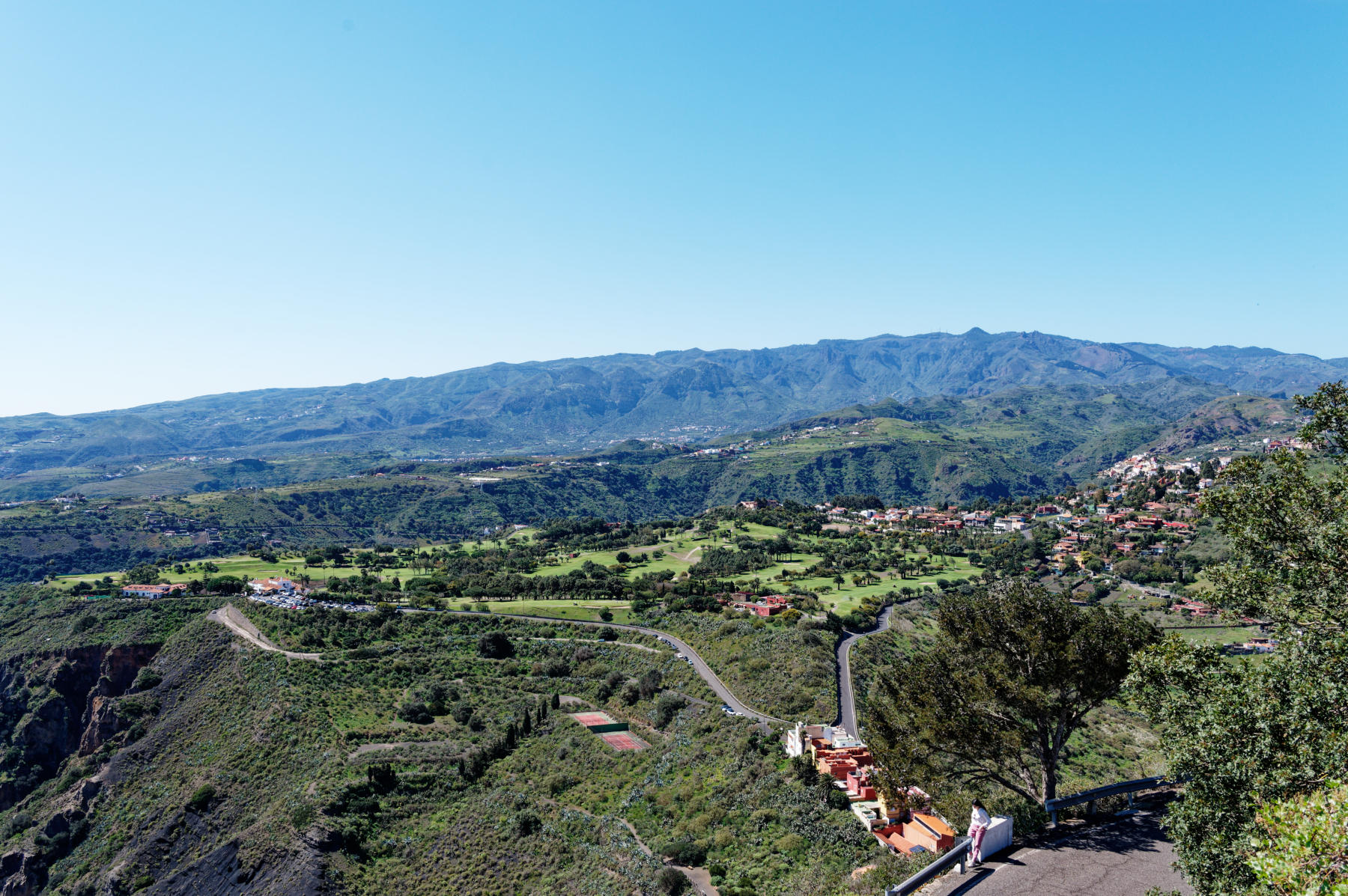 Before wisdom prevailed and I forswore golf for the rest of my days, I had developed quite an astonishing slice; I think I would have been in real trouble right from the first tee, given that playing your ball from inside a volcanic crater is not easy.

That view was the last great piece of scenery of a great couple of weeks exploring two of the Canary Islands.  The rest of the day was spent in the relatively dull administrative side of getting home – returning the hire car, sitting on a delayed flight awaiting takeoff, stumbling through the dark and cold and rain from the taxi back in the UK, discovering that the boiler had broken down a week before and the house was freezing, that kind of thing.

That last item quite ruined our plans for a relaxing final glass of something cold in a post-vacational glow at home.  Instead, we put a drip tray under the apparently now-leaking boiler, made a cup of tea and climbed into pajamas to try to keep warm during the night, with a firm plan to try to get the boiler mending people out on the next day. This last plan was also kyboshed by Jane’s honesty in confessing that we’d been in The Foreign for a couple of weeks; now, it turns out, we have to do two Covid LFT tests, 24 and 48 hours after we landed in the UK, before (assuming they are negative) they’ll even consider looking in the appointment diary; so it may be several days before we’re warm again. The only consolation is that excess electricity provided by our very recently-installed solar panels has at least furnished us with hot water in our tank without actually collapsing our roof.

(We’re also lucky in having a gas fire so we can at least keep warm whilst we check that we are not plague-ridden in order to receive the necessary service visit.)

And that’s about it for the holiday.  It’s now Saturday 12th March, and we have kept our spirits up by continuing what had become something of a habit during our time in the Canaries – a glass of something cold followed by a decent lunch (although we had to cook this one ourselves).

We’ve had a great couple of weeks, exploring two very different islands.  The weather was by and large wonderful, the scenery was superb and overall the experience was just what a holiday should be.  If you’ve been following the blog for the last couple of weeks, thank you for your company, and come back to these pages in a couple of months (all other things being equal)  to read about our next excursion, which should be a great deal more exotic.  See you then!