Yesterday was spent doing Not A Lot; five days of relentless tourism and 500 km of purposeful driving around Lanzarote, we decided, Was Enough, and so we contented ourselves with simply driving over to El Golfo in Il Fiat Hybrid and had a nice – and very substantial – lunch in a restaurant called El Pescador. 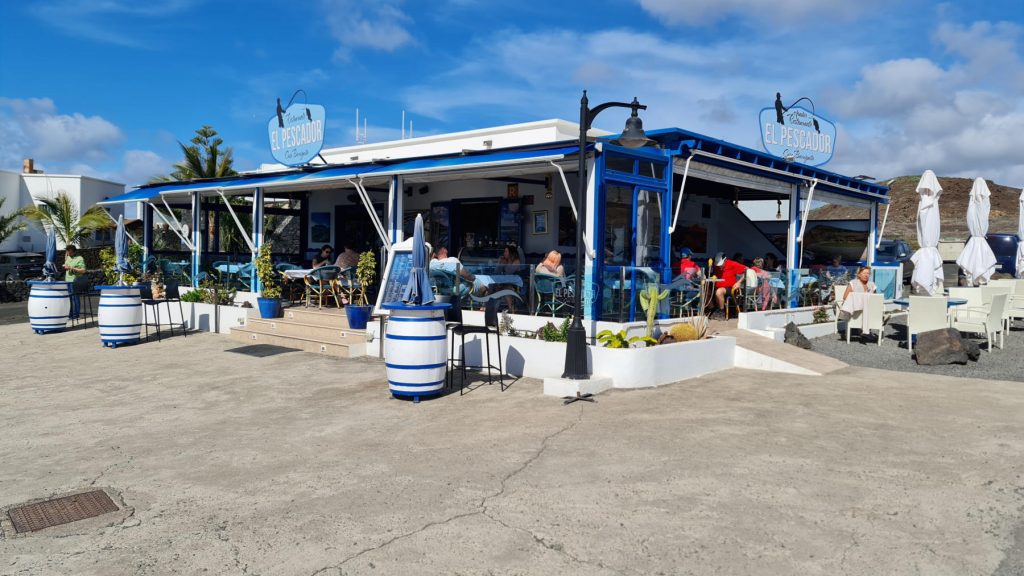 I made the mistake of starting with a tuna stir fry which turned out to be an entire meal even though it was in the starters section of the menu; so when the huge lump of grilled Fish Of The Day turned up for main course I could only finish half of it. It was all good food though. The only other thing we did there – apart from discover that the restaurant which had been recommended to us was closed on Thursdays – was to revisit the green lake to see if it had increased in verdancy since our previous visit almost a week earlier. It hadn’t really, but it was nice to see it again. 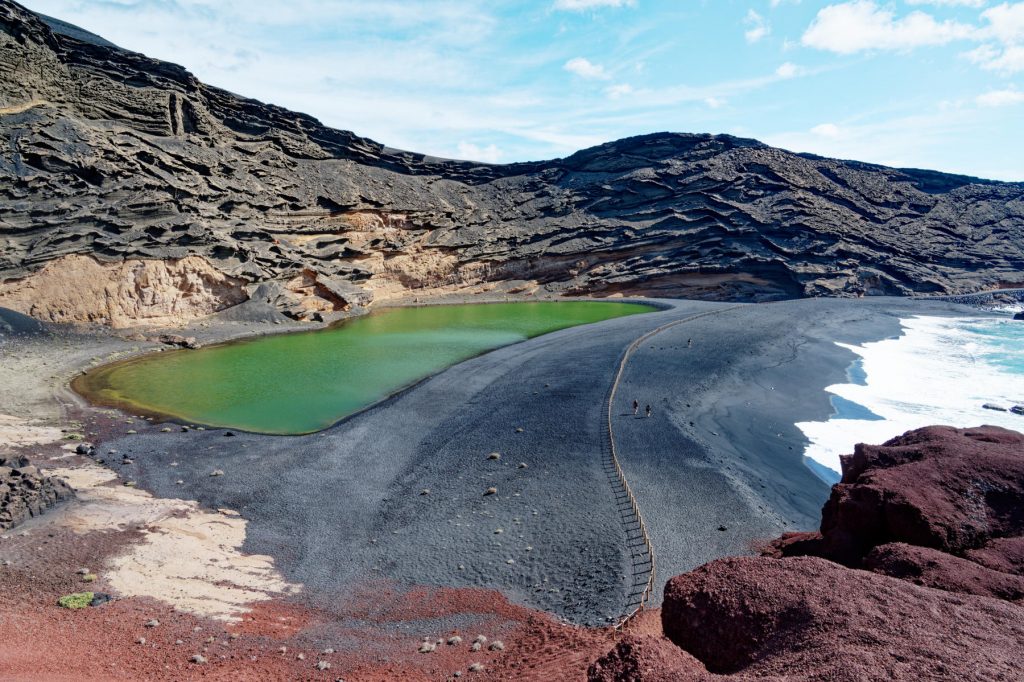 Near our car in the car park was one that was decked out rather fetchingly in a design by That Manrique – further evidence of his lingering influence over the islands. 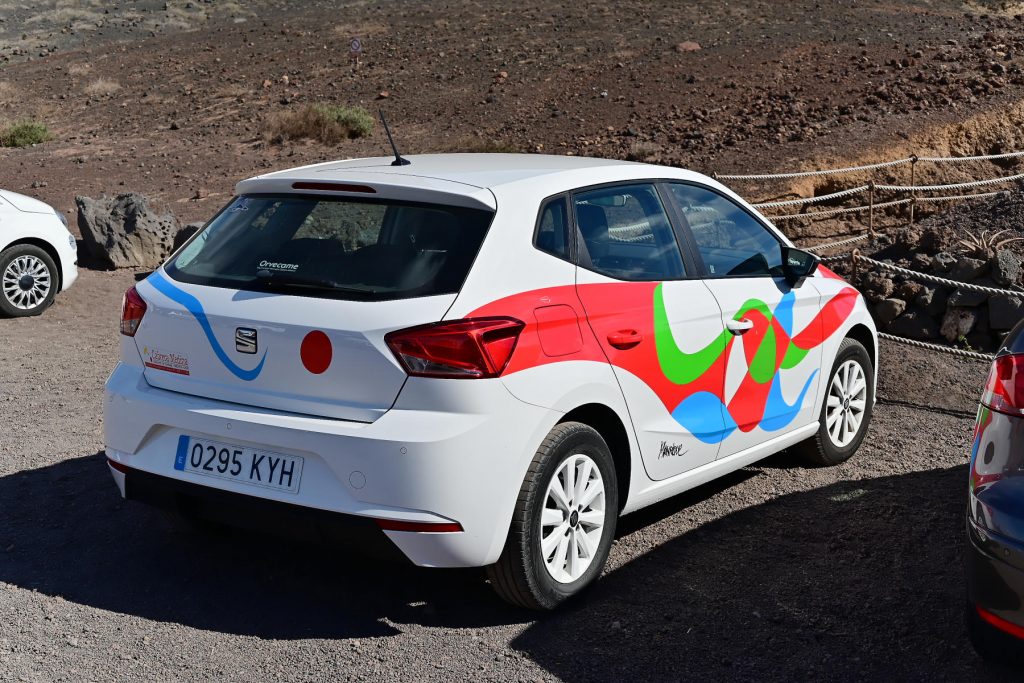 The rest of the day was spent in mundane activities – checking in to our Gran Canaria flights, catching up with the news and other bits of the papers and saying farewell to the lovely Dominica in the hotel restaurant.

Today was mainly spent getting from Lanzarote to Gran Canaria. We left the Casona de Yaiza at about 0930, got to the airport, dropped off the hire car, had coffee and got on a flight with the idiosyncratically-named Binter Airlines which took just 45 minutes to get us there. Once there we were greeted by not one but two Castaways reps, which was fine, because one of them could speak no more English than I can Spanish, i.e. almost none. The other, however, did a fine job of making sure we had a map of Gran Canaria and some suggestions as to places to visit whilst here. More importantly, the pair of them navigated us through a huge underground car park to the Cicar rental office where it eventually became apparent that they hadn’t quite got a car ready for us. It was thus great having locals to argue our cause and after a short wait we ended up with a Peugeot which we think is probably a 308; whatever, it’s a lot bigger than the Opel Corsa to which we were entitled, and it seems like quite a posh car.

From the airport to our home for the week – the Hotel Rural el Mondalón. This looks like it’s going to be a nice place to stay; it’s a working farm as well as a hotel and it’s quite swish.

We have a ritzy room above a lovely little courtyard 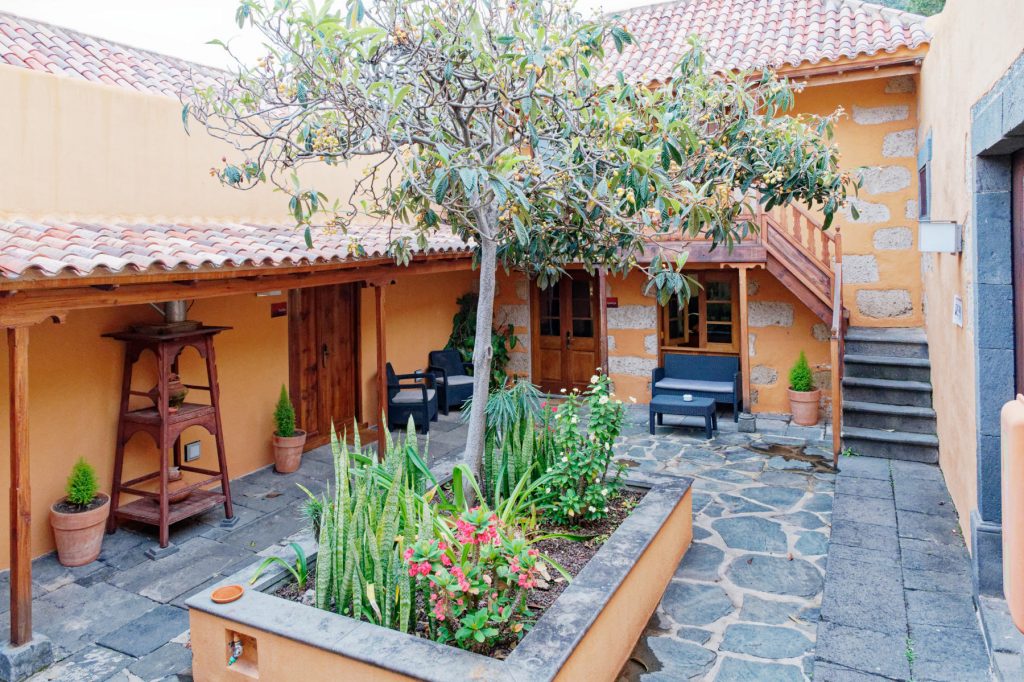 with a small balcony that has a view over part of the farm. 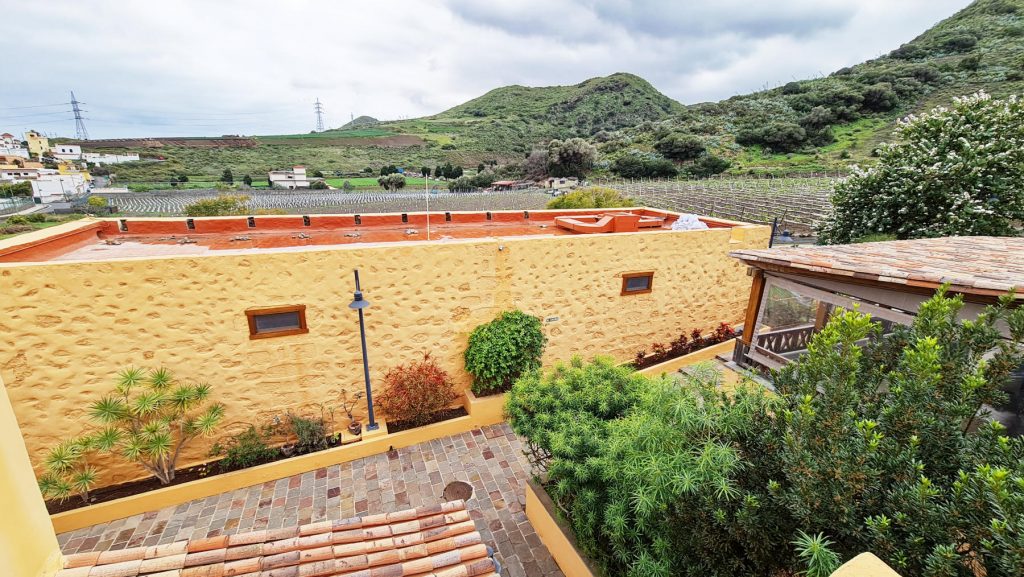 We arrived at 2pm, and its restaurant was still open for lunch, and we were told by the excellent Augustin at reception that it had just reopened, so we counted ourselves lucky on our timing. 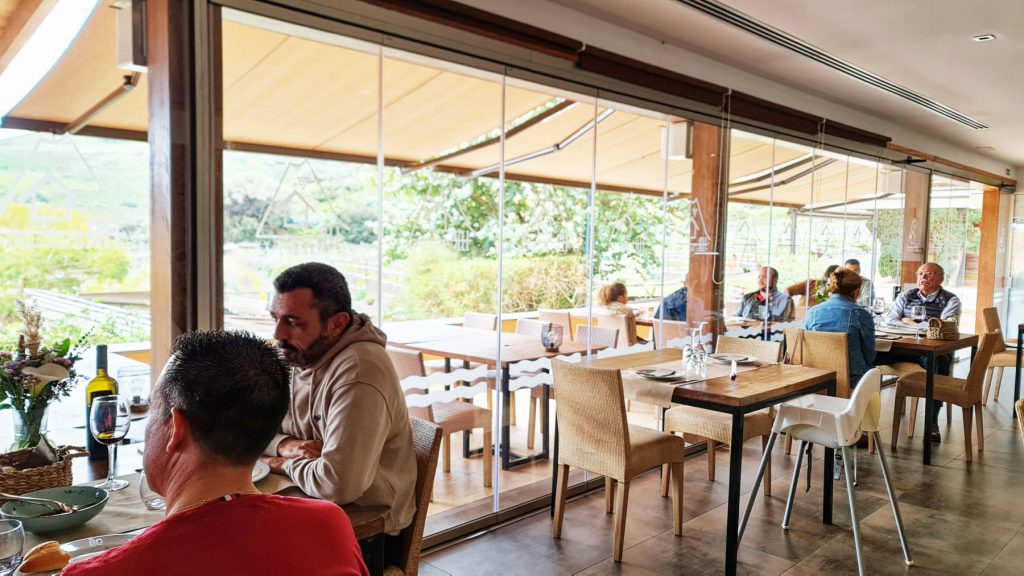 Once we got to the restaurant, it was indeed reasonably clear that they had indeed just reopened, as it looked like they were sorting through minor teething troubles on an ongoing basis. Also, it’s a meat-focussed menu, and we ordered the fish, which arrived looking splendid on the outside but undercooked (well, raw, actually) on the inside. They bunged it in the microwave for a short blast and it returned rather better cooked. It was actually a good fish but one of the accompaniments – a fried plantain – was unrewarding to eat. But it was overall OK, even if it looks unlikely that we’ll rush back for lunch every day.

Whilst the Casona de Yaiza in Lanzarote was quirky in appearance and very comfortable, it had a couple of things that I missed: a lounge where one could just sit and order a drink whilst, e.g. writing the day’s blog; and facilities for making a Nice Cup Of Tea – the only mugs of tea we got were at breakfast. And, look, I know that’s pathetic, but when you get to our age this sort of thing begins to matter. So we were delighted to find that our room in Gran Canaria (named “Albillo” – a type of grape; every room was named after a grape variety) featured not only a kettle but also a fridge! This meant that a trip to the nearest supermarket was high priority so that we could procure a selection of life’s essentials – gin, tonic and milk. The nearest place was nearly a mile away and down a busy road with no pavement, so we drove there, bought the goods and hightailed it back to the hotel for a delicious cup of tea. Or three.

I took the chance to wash out a few smalls and hung them out to dry on the rack on our balcony put there specifically for that purpose. That is why it then started raining. Quite heavily, actually.

And that’s about it for the day, actually. We seem to have fallen into a pattern of having a big lunch and no evening meal, so the rest of the day has been given over to relaxing and, on Jane’s part, thinking about expeditions we can make on the morrow et seq. Not a lot to report in this posting, but hopefully lots to come over the next week, so do check back in and find out what we get up to.