Wednesday 19 September 2021 – Before I get on to any further details of What We Did On Our Holiday, I thought it was worth reporting that both Jane and I were declared free of the dreaded lurgy by the Spanish authorities, which means we are free to leave the country tomorrow. So, we had just one more full day in the delightful city of Ciutadella.

The weather has been lovely these past couple of days – sunshine and not too much humidity.  The Met Office forecast for today, though, suggested a 40% chance of a light shower.  So when this happened

it was a bit of a surprise, not least for the hotel.  The restaurant is in an open courtyard, and has many umbrellas and suchlike devices for shade; but these were not equal to the task of withstanding this deluge.  After the rain stopped, we went to get breakfast and were confronted with scenes of mild chaos.  I have a suspicion that the restaurant is a little undermanned (like the hospitality industry everywhere, really), as the staff there always seem to be scurrying to keep up; so when half the tables and chairs were soaked (and, I might add, cornering at speed in the courtyard was a tad perilous), they were really struggling.  So we went back to our room for half an hour to let them catch up, and when we went back things were somewhat better, though not completely under control. The practical upshot is that we got our Earl Grey and I got my Marmite, so this, along with our clean bill of health, made for a reasonable start to the day.

Ciutadella is a lovely city;  we know this from a previous visit and time here during the Cami walks, and it is the reason we had decided to stay here for a couple of days’ relaxing after our exertions.  Actually, this was possibly a very slight tactical error.  Yes, it’s lovely, but it’s also quite small, and we’d by now explored most of the easily-accessible nooks and crannies.  It might have been a better idea to find somewhere new on the island for these relaxation days so that we had better scope for exploration and discovery. On the other hand, the Can Faustino is a delightfully luxurious hotel, which has been a pleasure to stay at.

We decided to walk around the city some more, and, to give us a sense of purpose, rather than simple aimless wandering, we conceived – and superbly executed – A Mission Of Importance: 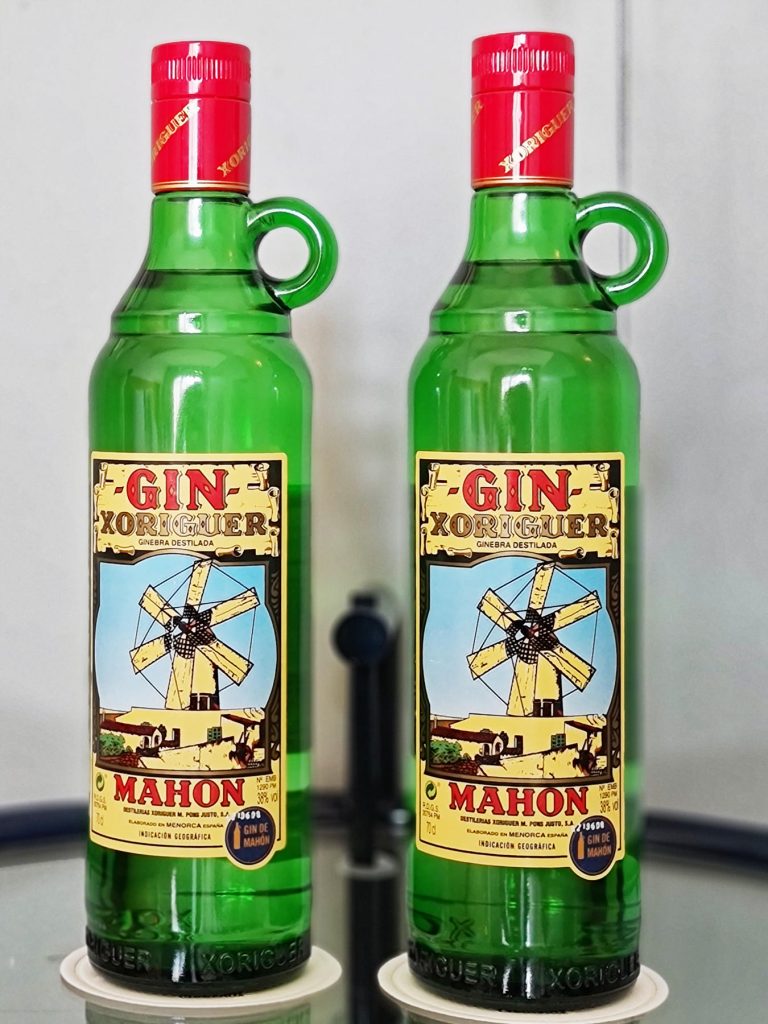 but, in discharging this solemn duty we got some more pictures from around the city.  Buildings and harbour area are really striking 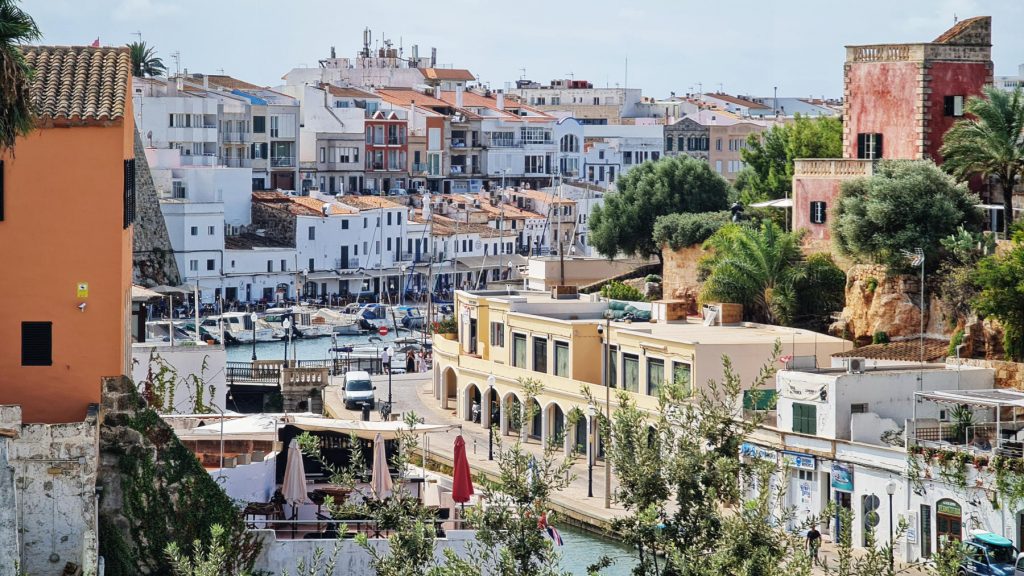 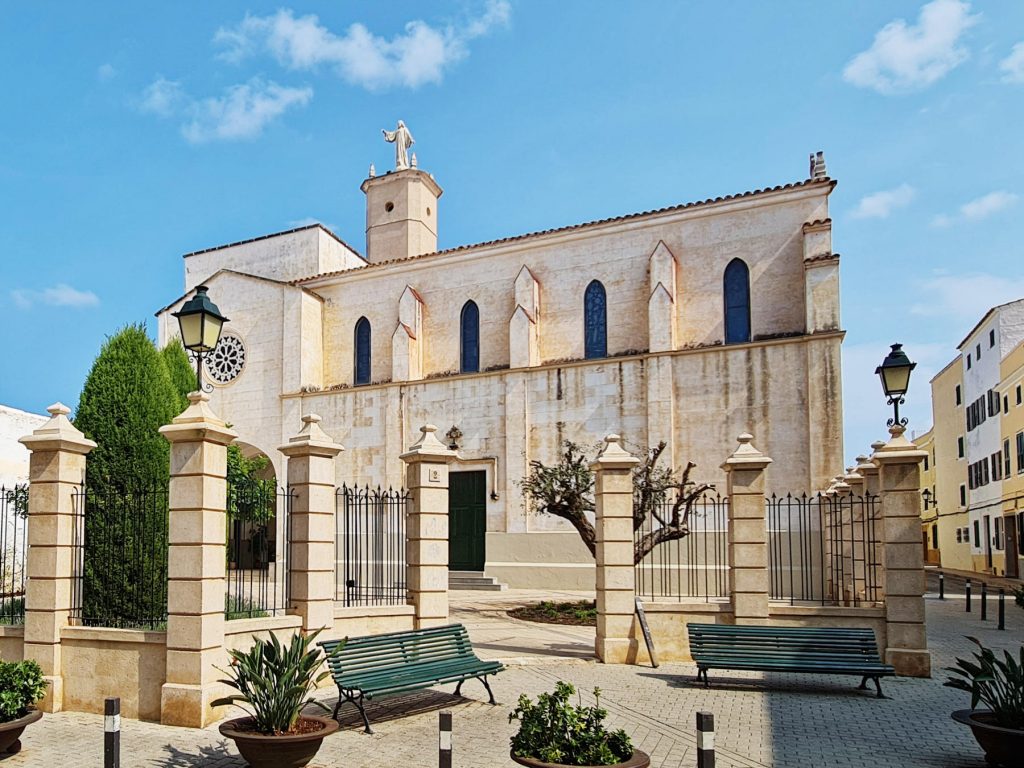 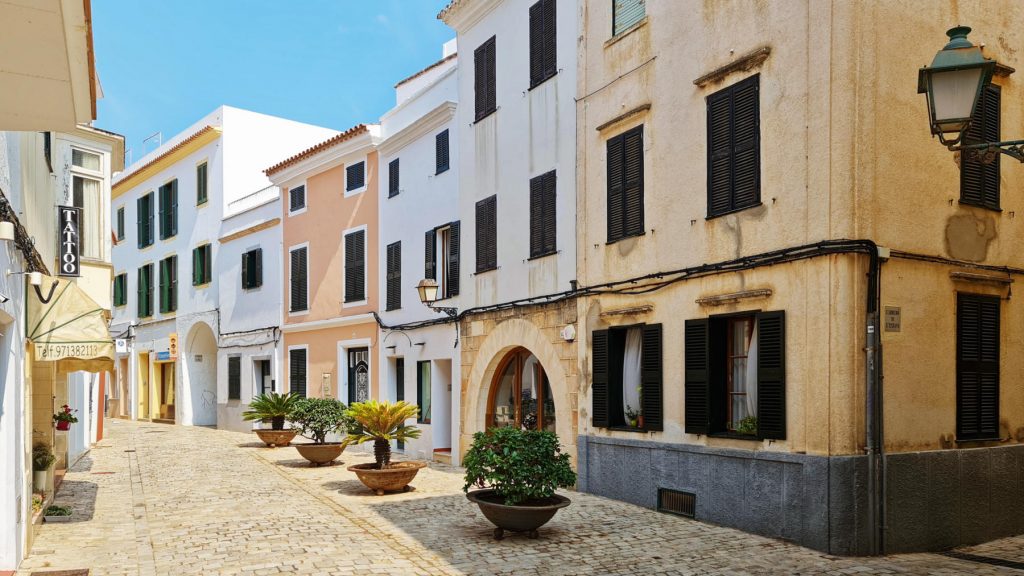 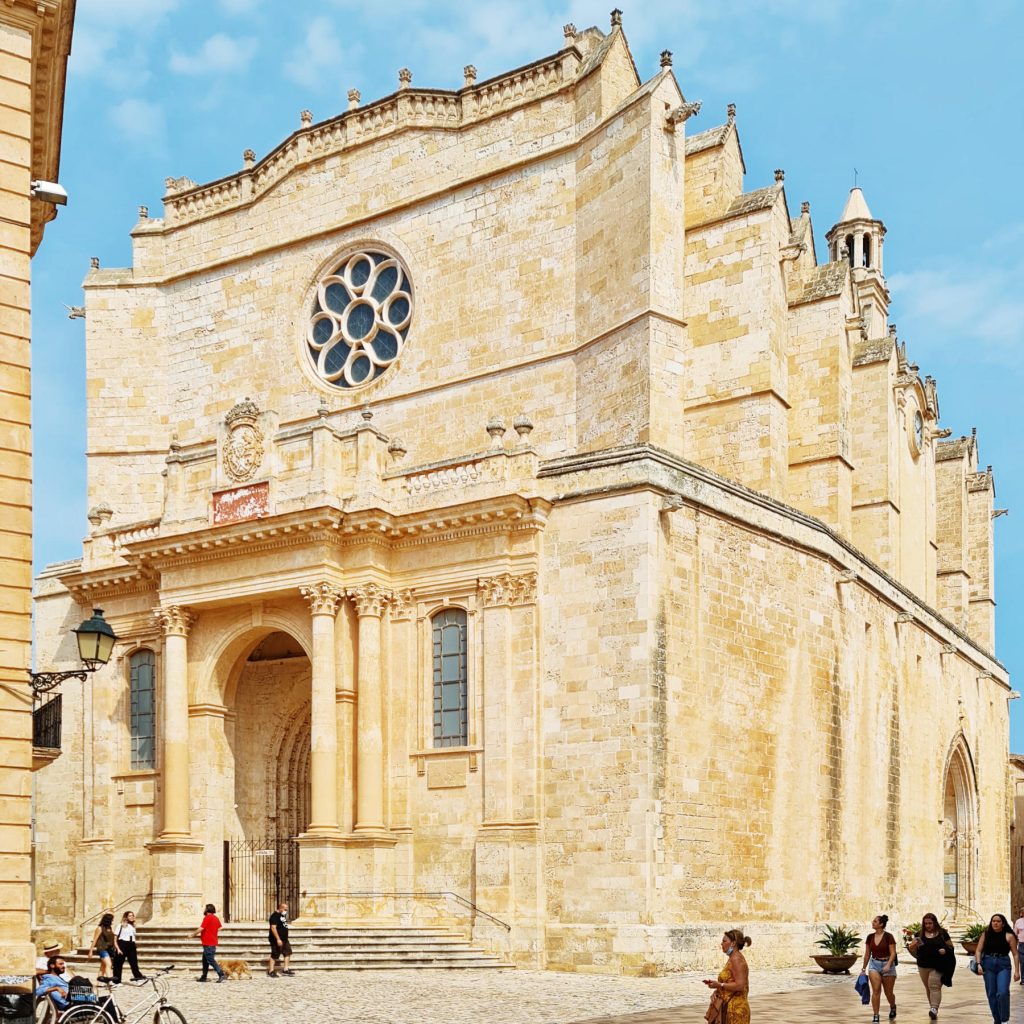 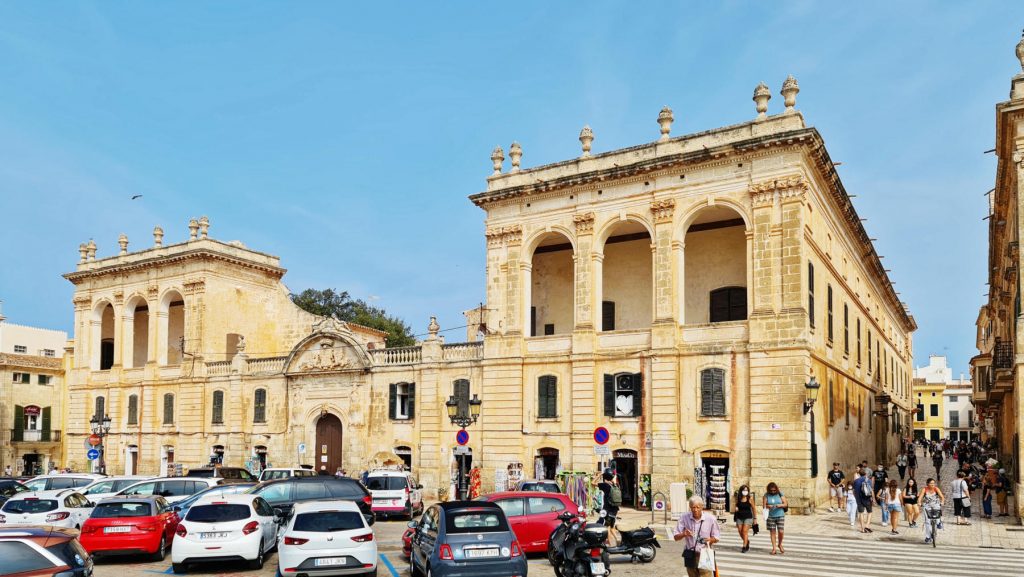 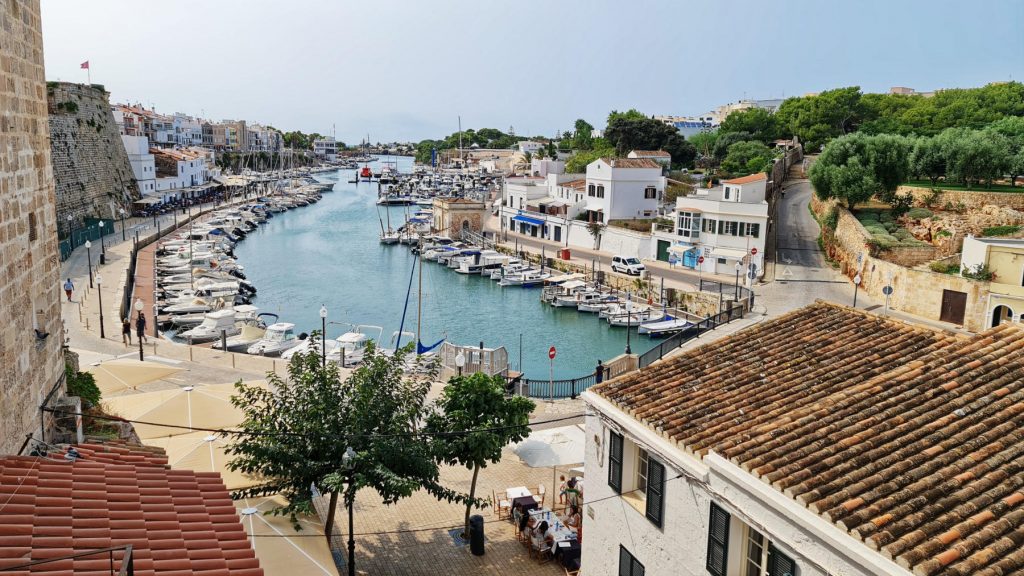 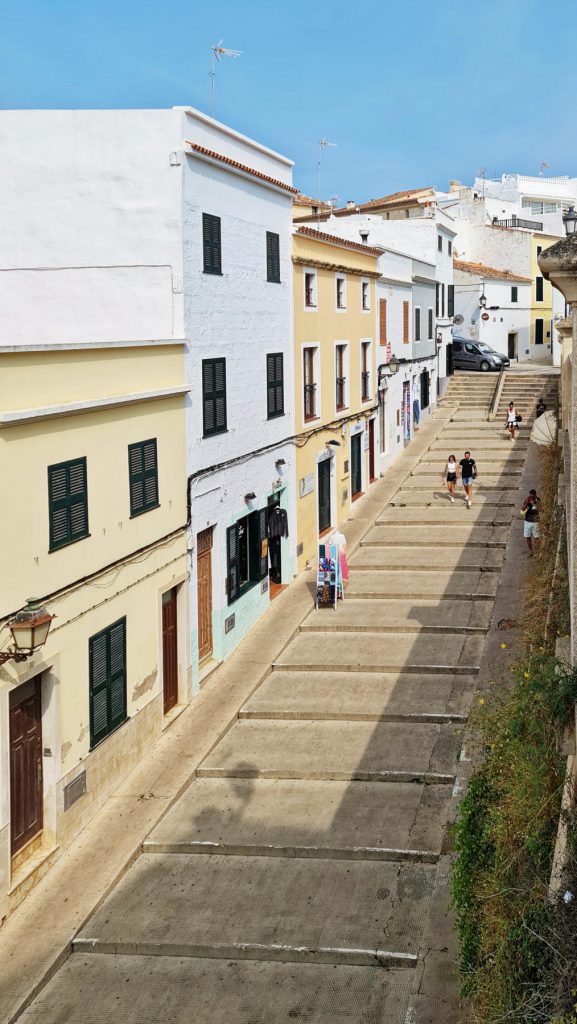 and there were also some lovely quirky little vignettes, starting with this unusual piece of garage flooring. 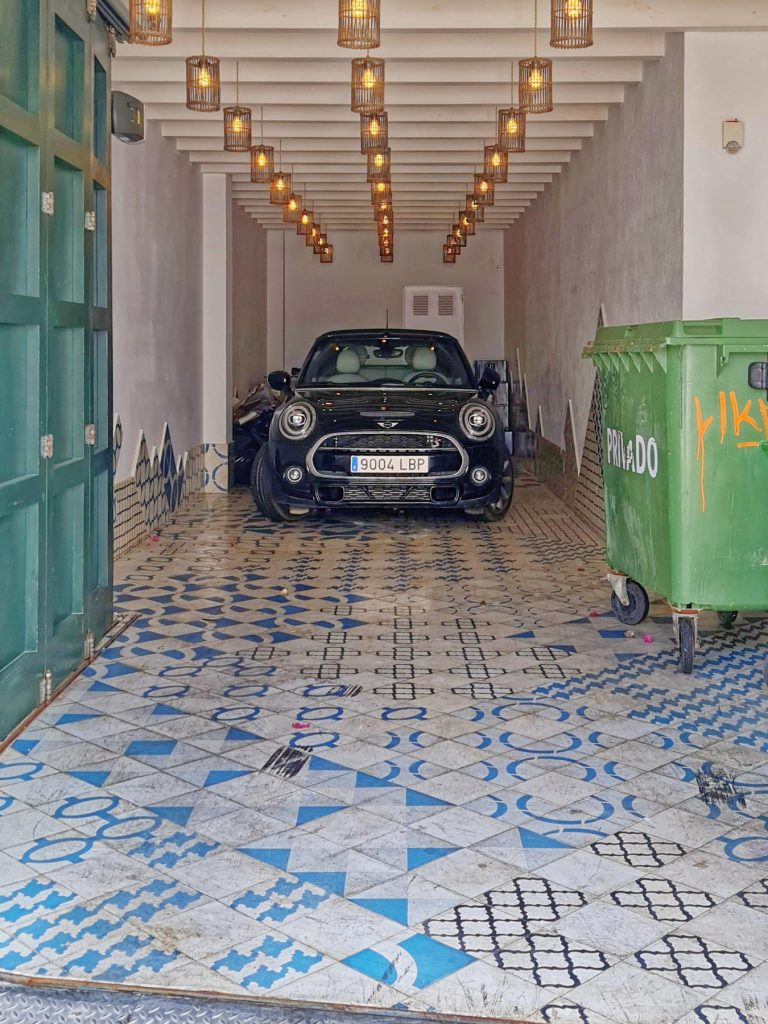 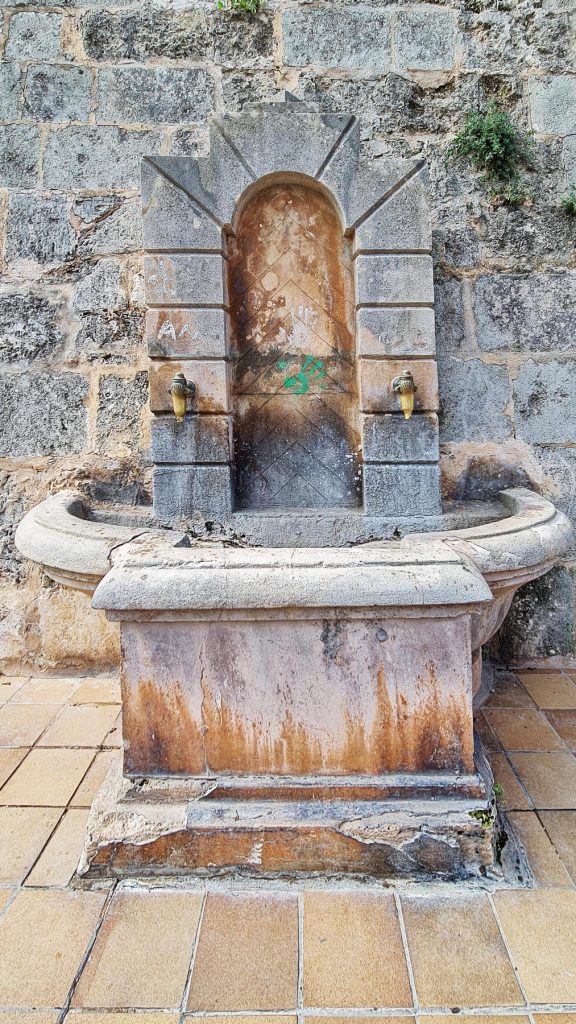 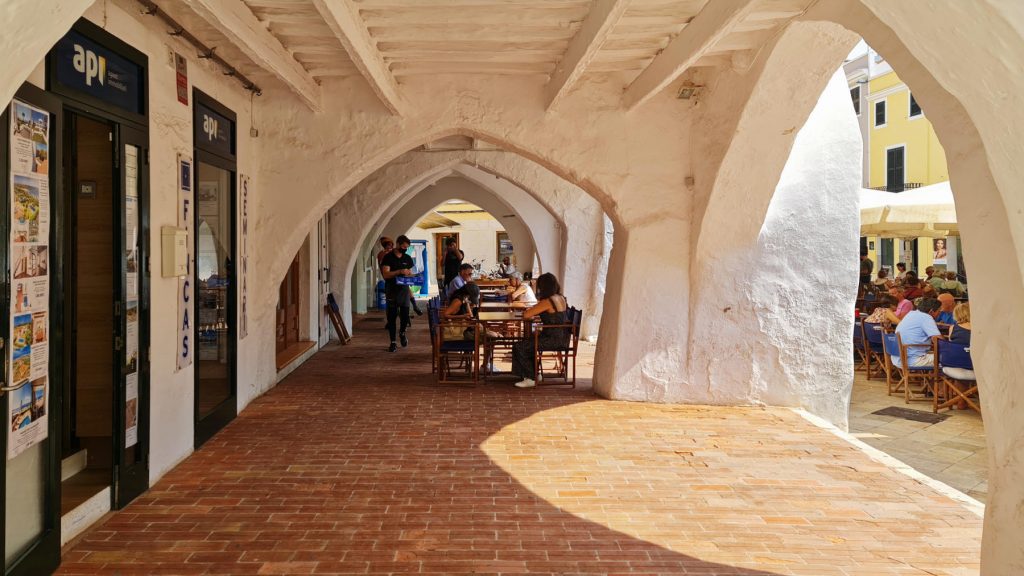 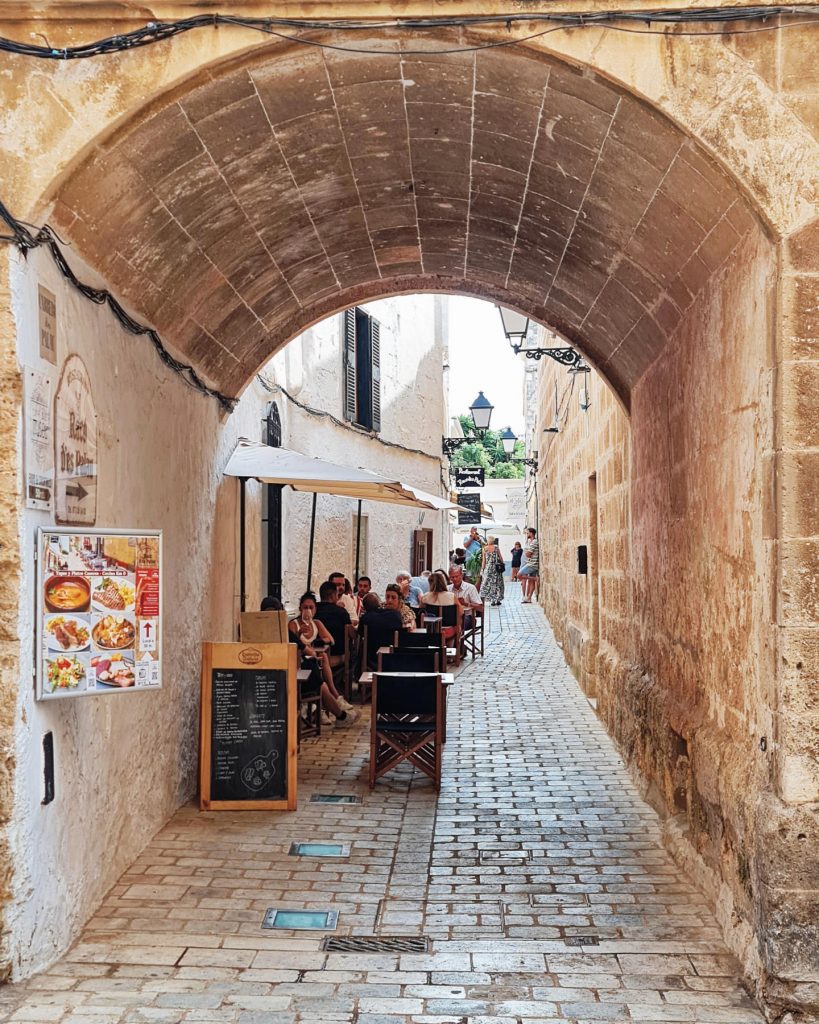 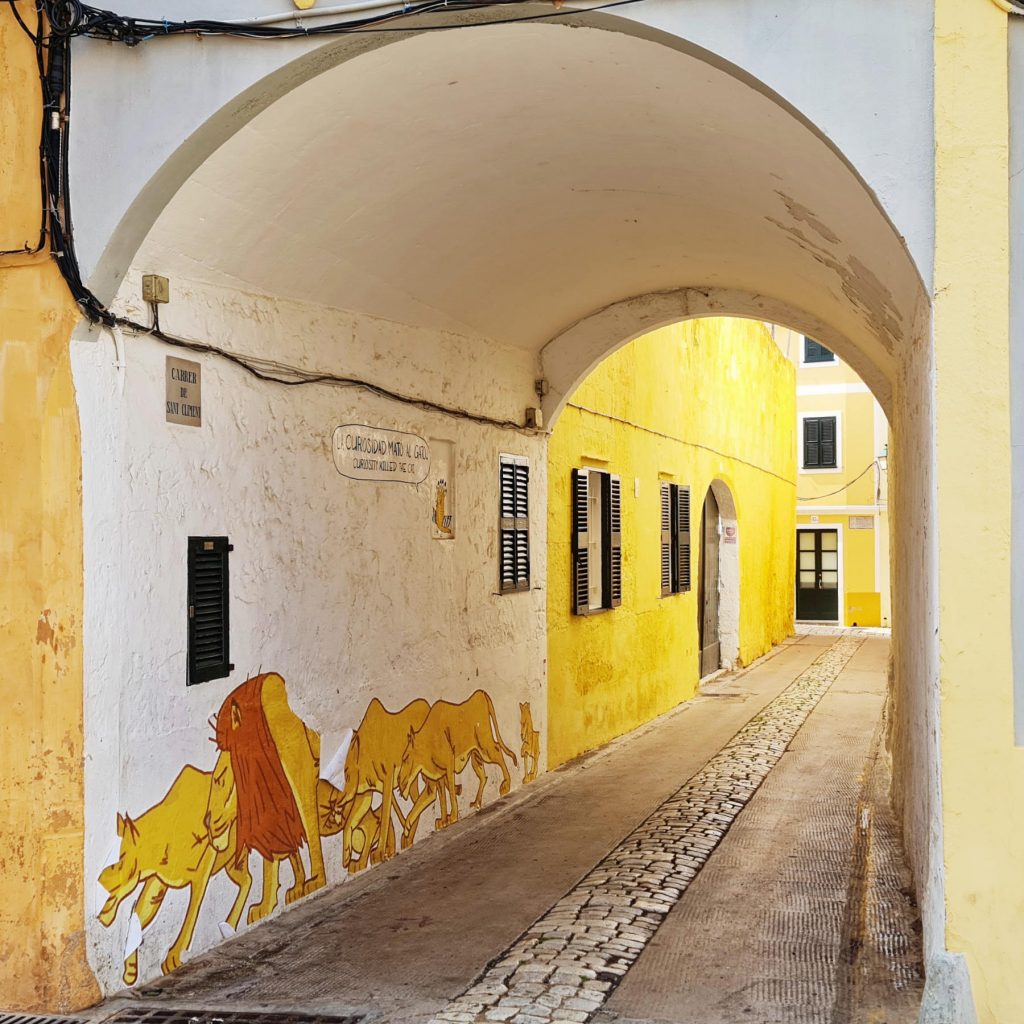 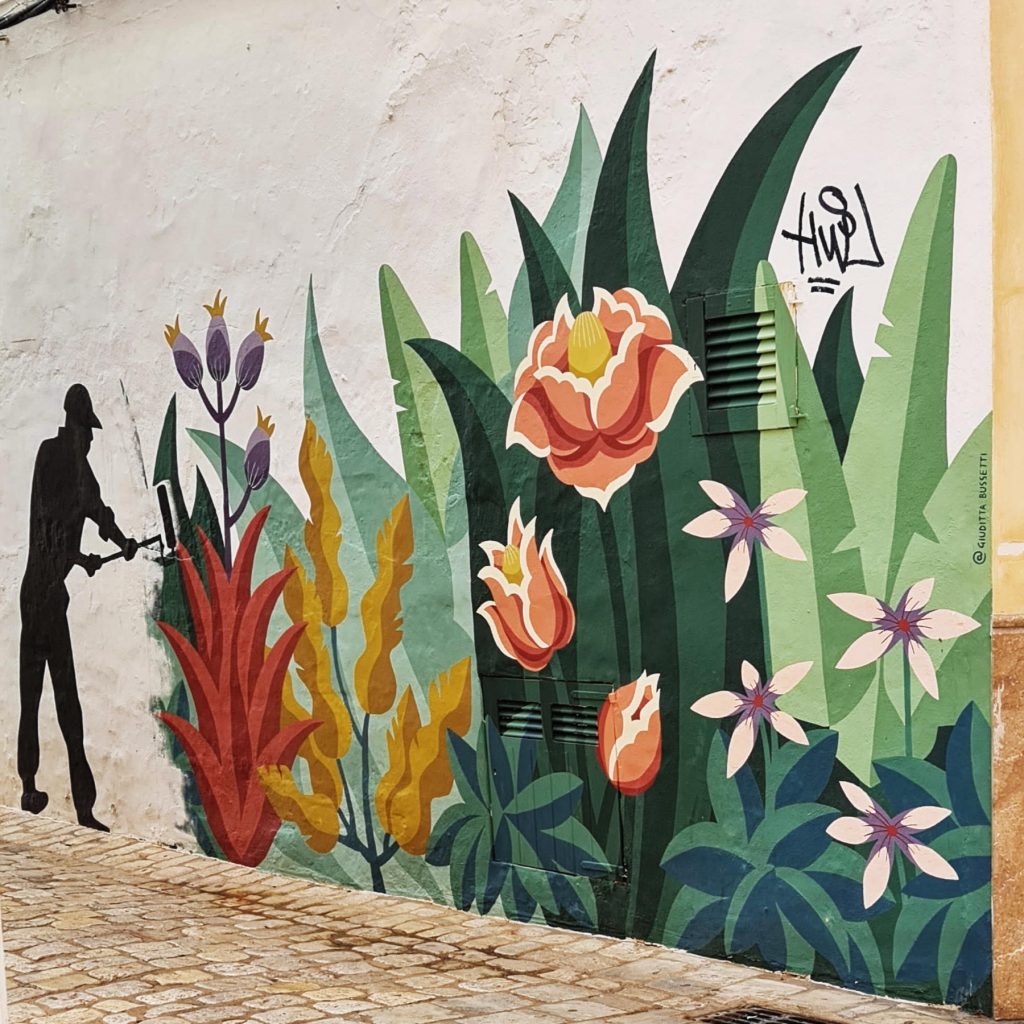 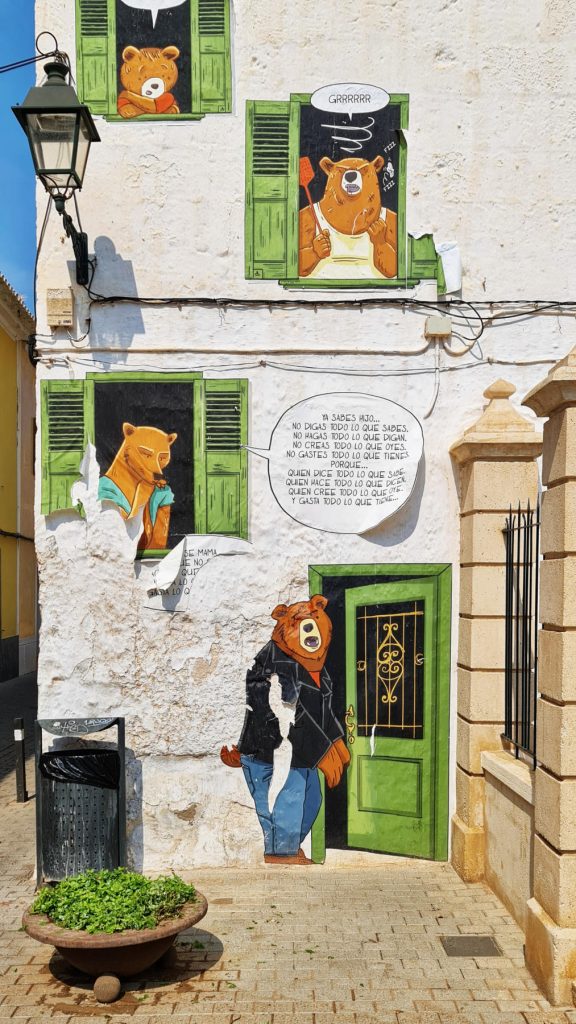 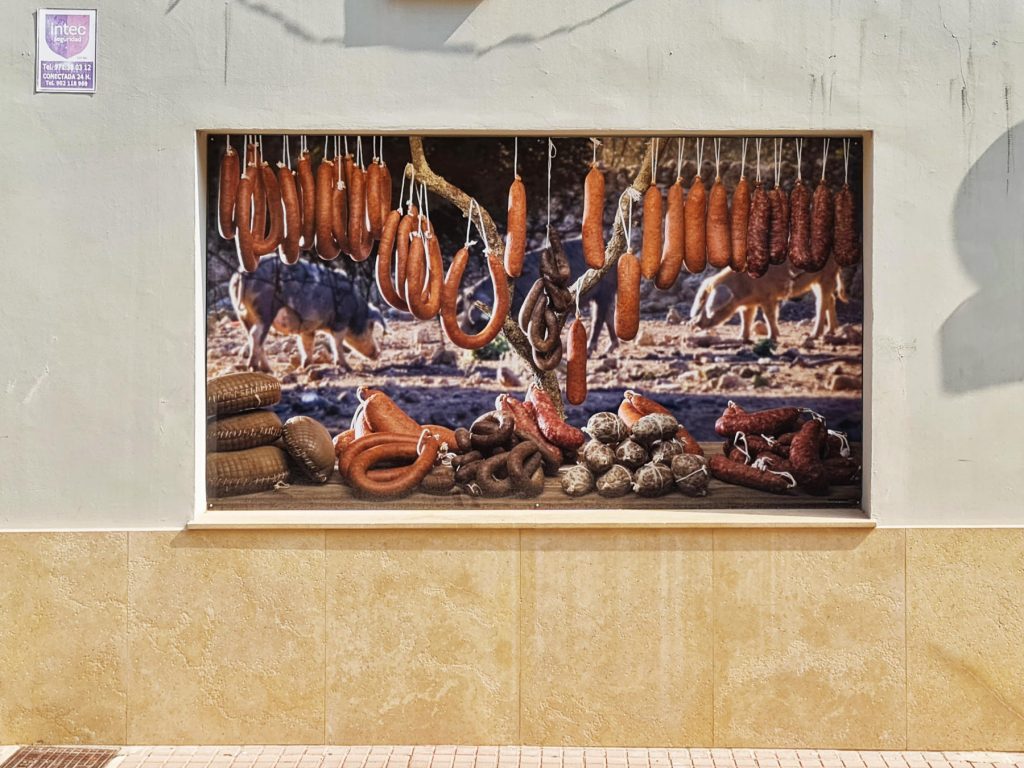 (actually, I think the last of these is more likely to be an advert for the supermarket round the corner, but let’s give it the benefit of the doubt, eh?)  So it was a pleasant walk in sunshine and relative cool – about 25°C; looking at the weather forecast for Surrey, I think we’re in for a bit of a shock when we get home tomorrow.

Before we headed back to the hotel, we decided to revisit a scene of horror and gruesome memory from our previous visit to the island, two years ago.  Then, we were staying in Mahón, and took the bus to visit Ciutadella.  Very soon after leaving the bus station here to walk into the centre, we happened upon this scene, which I reconstruct for you today. 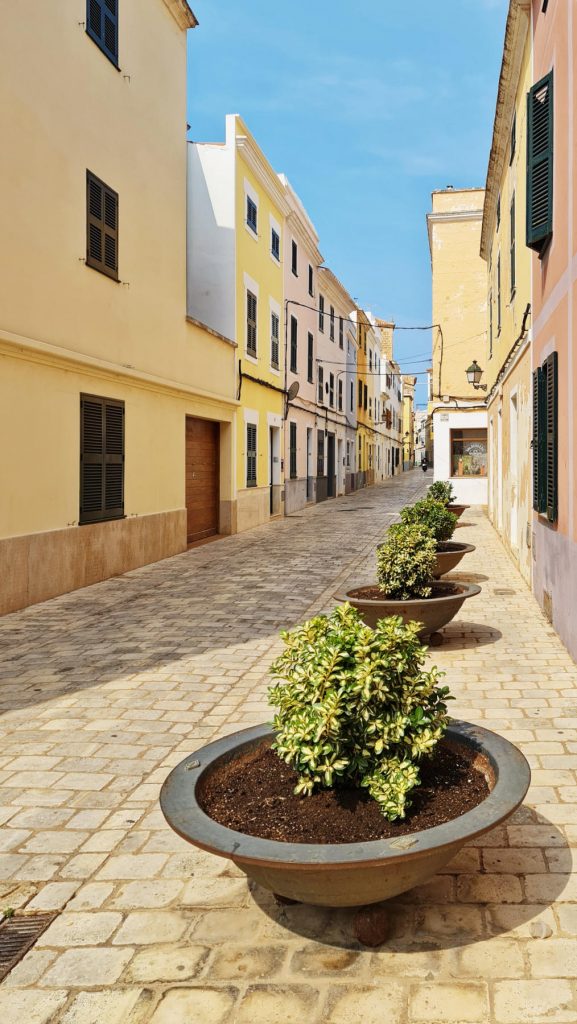 It was sufficiently photogenic that I thought it would benefit from being just a little above street level to take a photo, so I stepped onto the nearest of the planters you see in the foreground. Imagine my surprise! when instead of supporting my weight and giving me the elevation I had expected, the thing tipped over as I stepped on it with one foot, with the result that its cast iron edge arrived with some force on the big toe of my other foot. It bloody hurt – and I use the adjective advisedly, as we had to find a café fairly sharply so we could steal handfuls of their paper napkins to stuff into my shoe to stop the blood making even more of a mess of it than it already had. Amazingly, these deadly dangerous devices can still be found lurking all over Ciutadella, lying in wait for other passing unfortunates to victimise, with not a single health and safety warning sticker to be seen.  Disgraceful, I call it.

After this opportunity for closure (my toenail has by now just about grown back, thanks for asking), we decided it was time to head back to the hotel and gather ourselves for the evening’s delight – an evening meal in the lovely Moli des Comte building that I first mentioned about a week ago. That’s why I am writing this blog entry now, because I’m likely to be too tired to finish it later.  I will report further; I’ll post an update when I can.