Friday September 17 2021 – A day of relative ease beckoned: a leisurely start; reportedly easy walking; and no dependency on anyone else for logistical support, so we could start when we liked. Add to that the great facilities at our disposal at the White Sands Beach Club – a kettle and a toaster – and our start could be on the basis of a decent breakfast. Ah, life’s good!

The forecast was for slightly changed weather than we’d had thus far. Instead of 28-30°C and cloud, we were promised 25°C and bright sunshine. We thus thought it would still be worth getting out at a reasonable hour and so were on our way just after 9am, with less than 10km to cover to our next stop, in a small town called Ses Salines. As ever, if you can’t bear to read my guff, you can invest just two minutes of your life in watching the Relive summary of the day.

It was with regret that we left the White Sands, as it had been so nice to have unfettered access to such luxuries as a mug of Earl Grey whenever needed. But we wended our way out of the resort 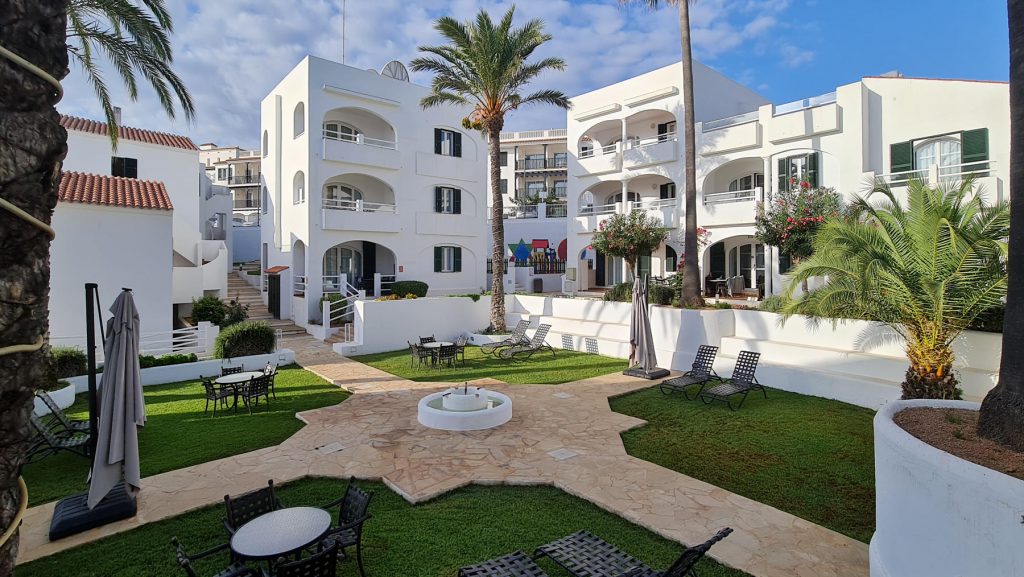 and were soon on the Stage 4 track, in sunshine fit to crack the paving stones, as promised. 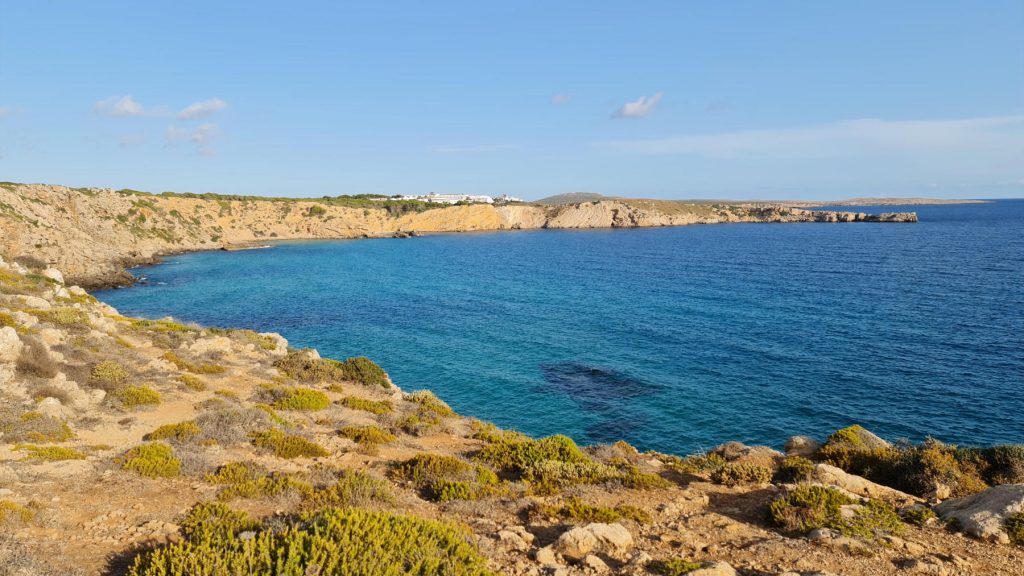 We were overtaken by some fit young things going for a run on the track and they must have got lost or something because they passed us coming back as well. 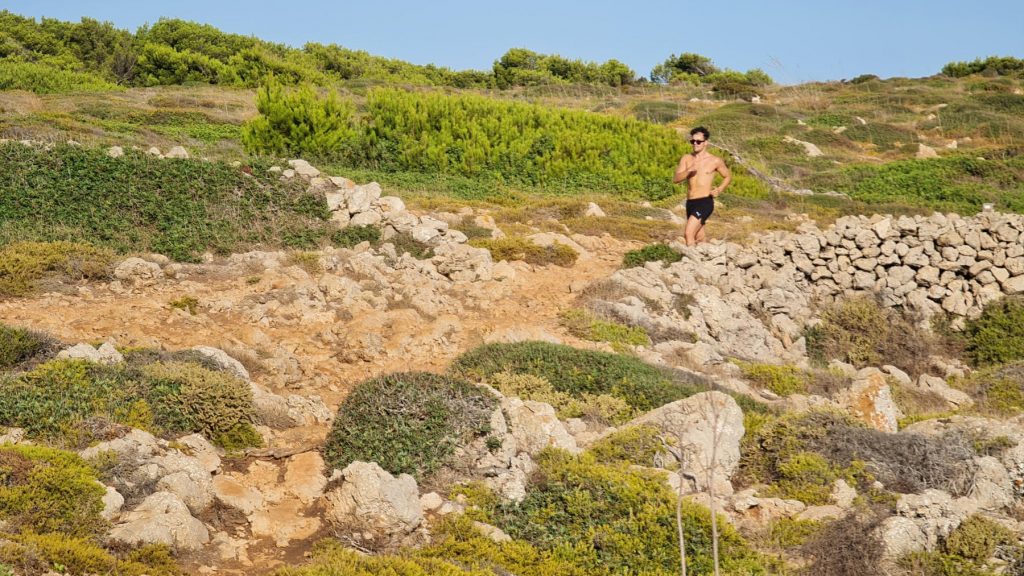 We reached a very odd thing, which was a decision point which didn’t feature a Cami marker post. 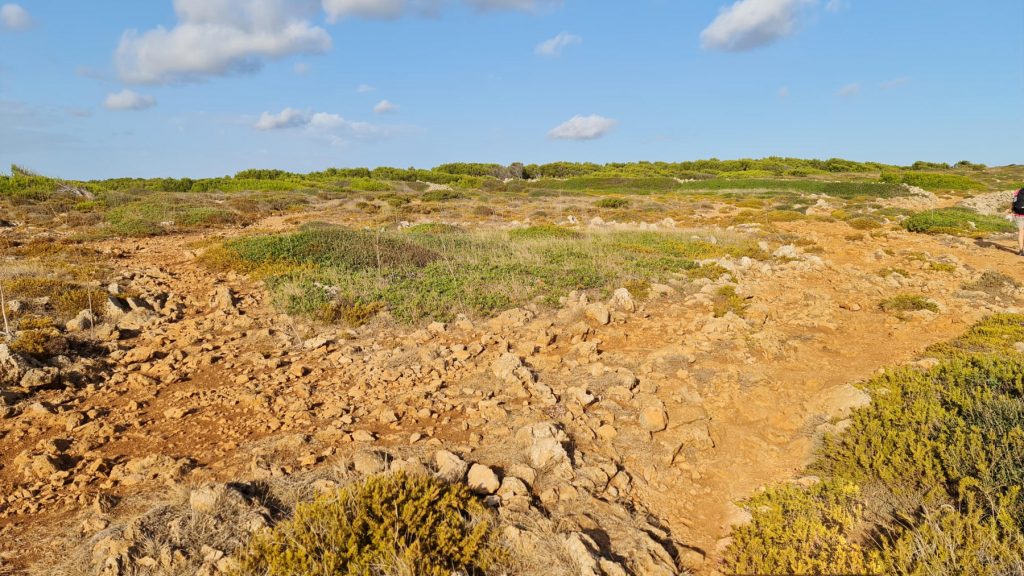 Intuition suggested that we take the right fork, staying by the cliff, and eventually we were proved right with a marker post some couple of hundred metres further on; the first time that the correct way hadn’t been very clearly marked, actually.

We reached a town called Ses Fonts, a pleasant place which seemed to be mainly a tourist area, as there was an exit road clearly marked, and it wasn’t itself en route to anywhere. 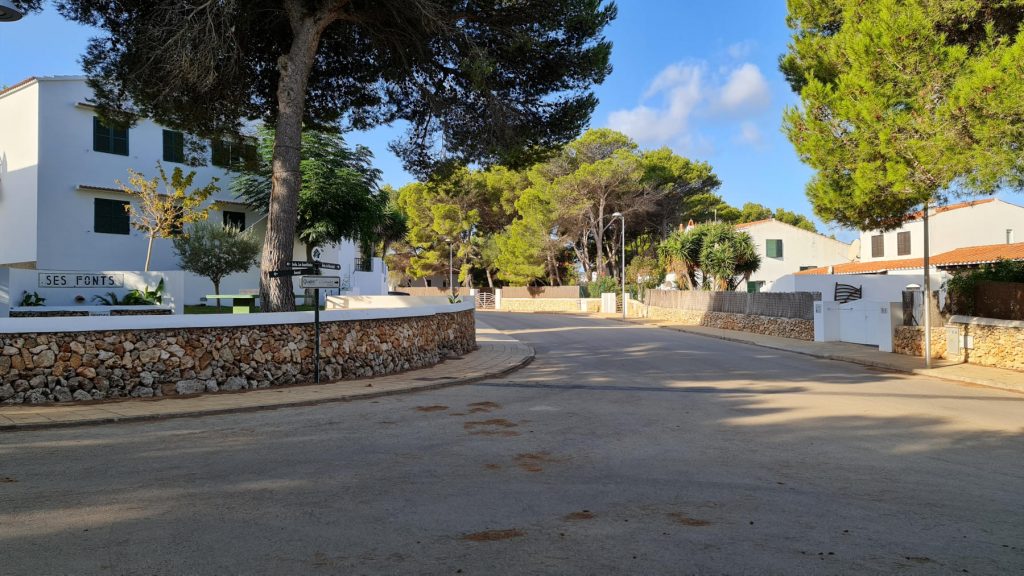 It had what looked like a well-maintained “Parc Forestal” 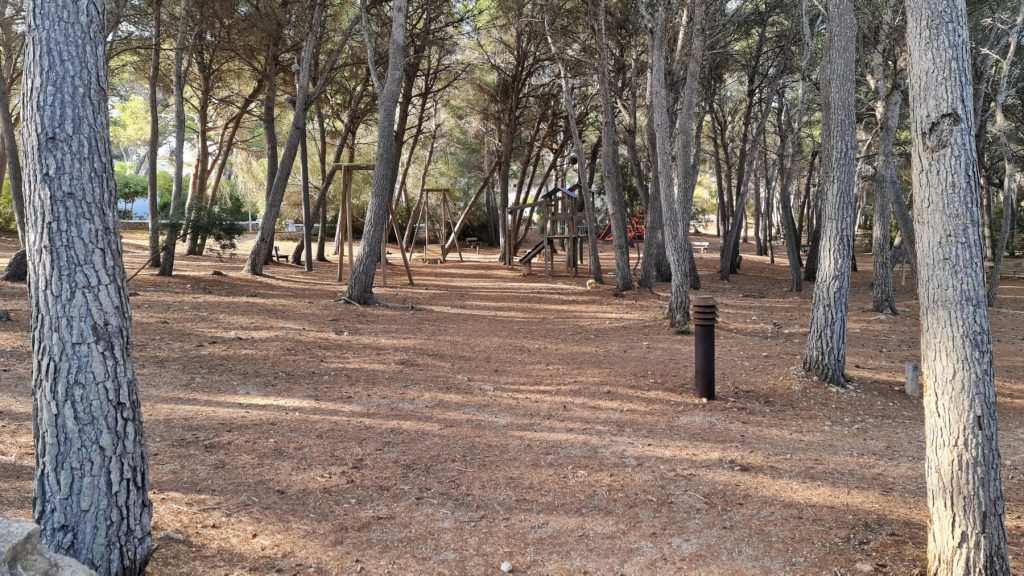 with a kids play area, and various areas for various activities and trails for things like “footing”, whatever that actually means. There was a seniors’ trail as well, and we speculated that this either meant frequent seats or gin dispensers round the course.

We cleared Ses Fonts and got back off tarmac on to tracks, past a sewage farm 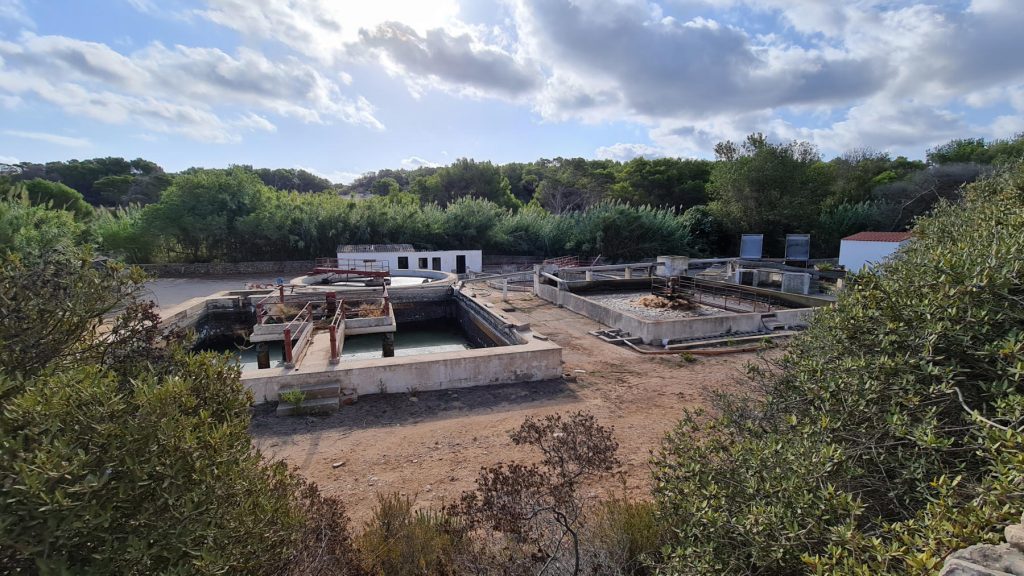 (all of life can be found in this blog if you look hard enough), and along a stony uphill track through woodland. Some cyclists came down it with a dog, but common sense overtook them and they got off and walked a while as this was clearly safer. 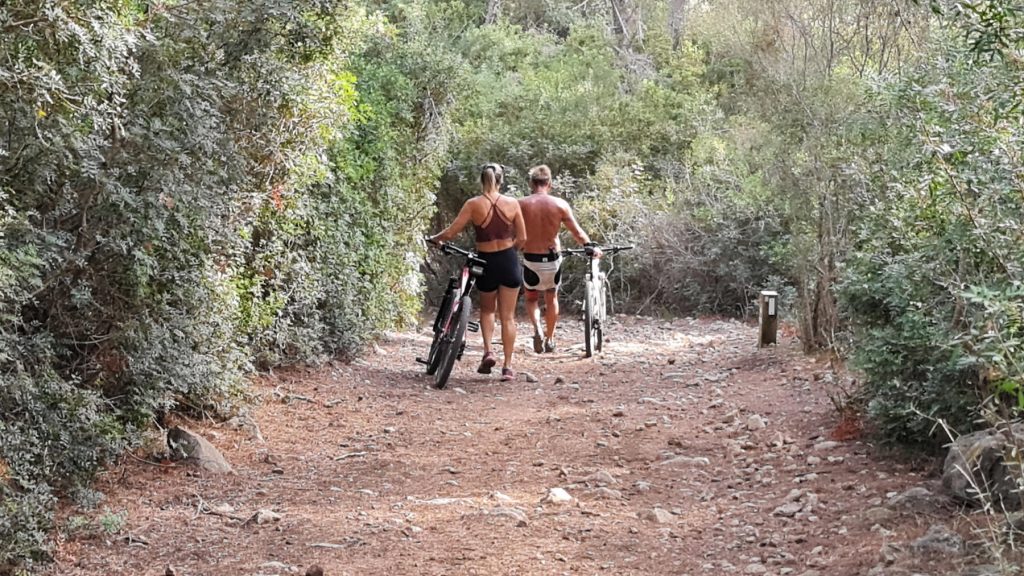 The rocky path carried on 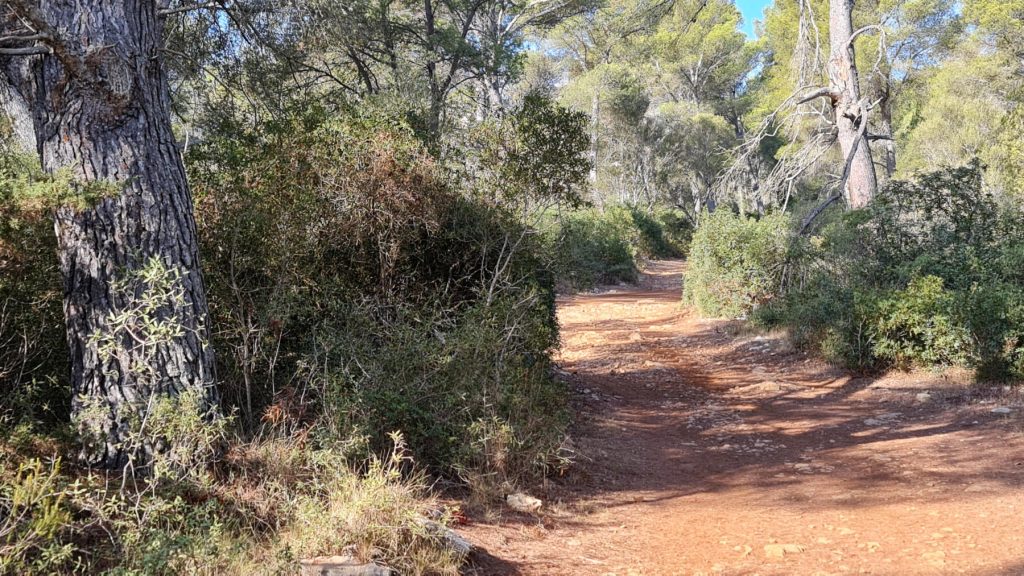 past a disused house 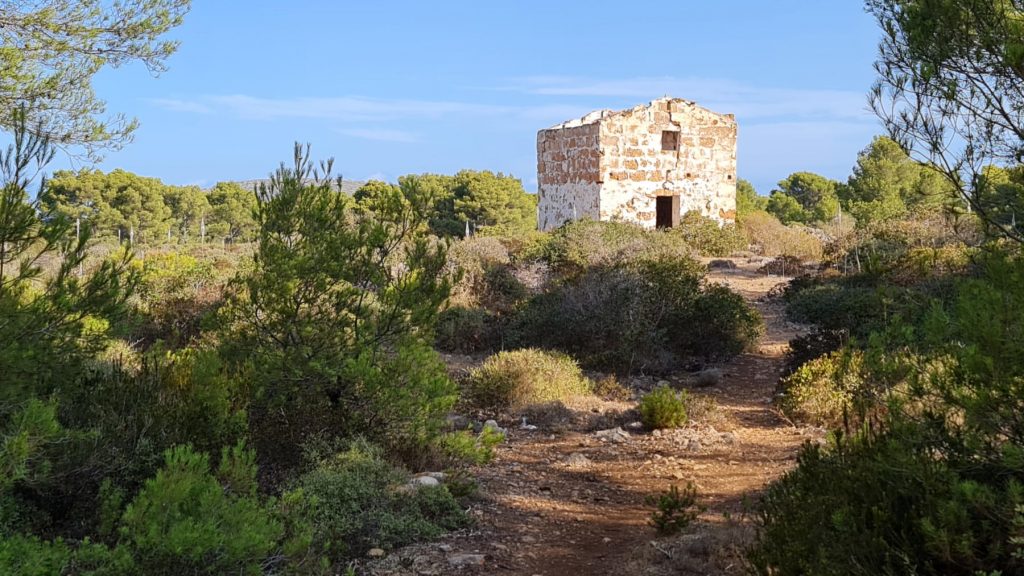 before the scenery morphed into much more open countryside, with, once again, a view of the island’s high point, Mount Toro, in the distance. 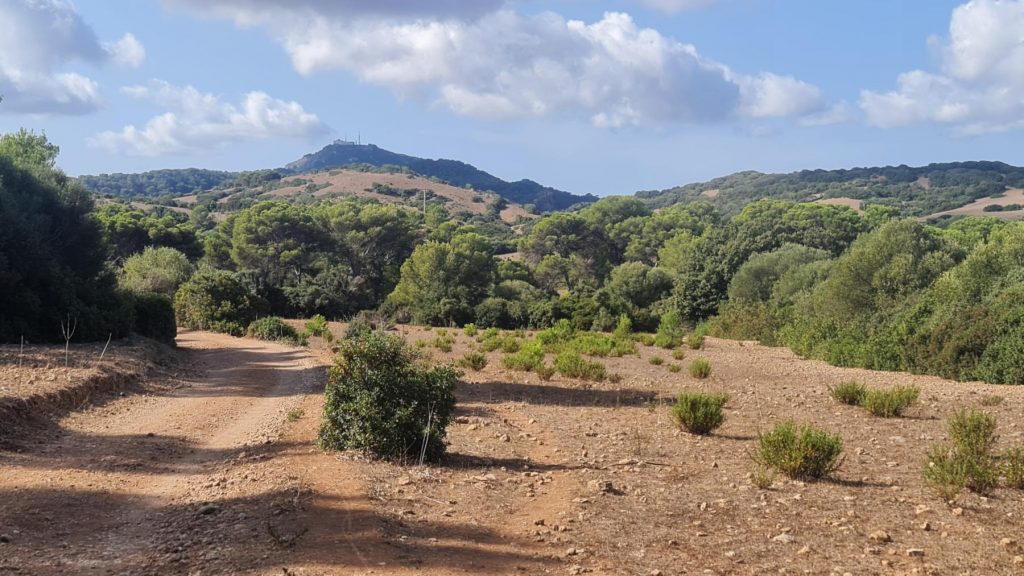 We felt we’d earned a short rest at this point, so stopped for an apple break before moving on. The track passes the site of the Paleochristian church basilica of Es Cap des Port. 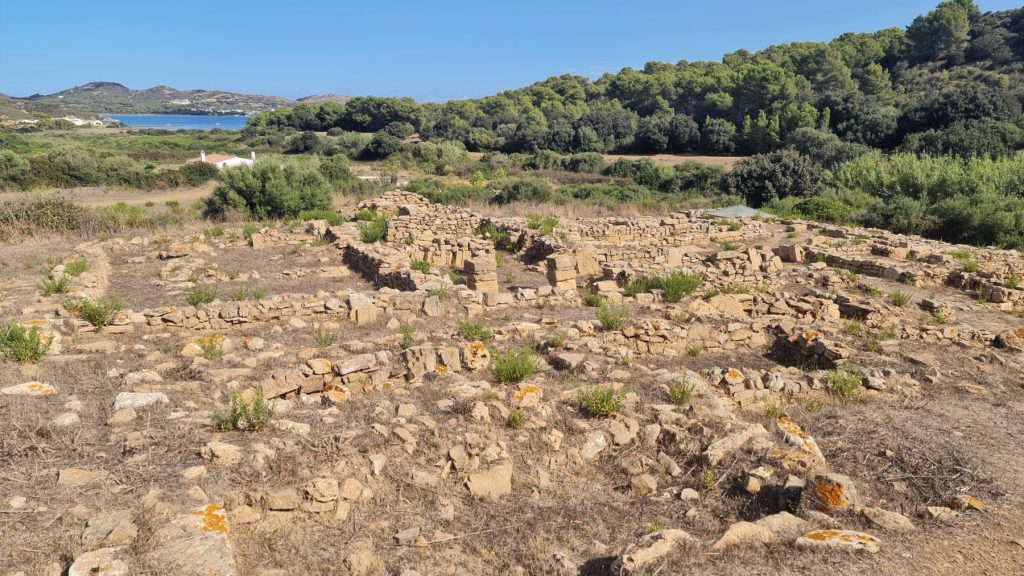 In the photo above you can just see the covering over the baptistry, which looks like this 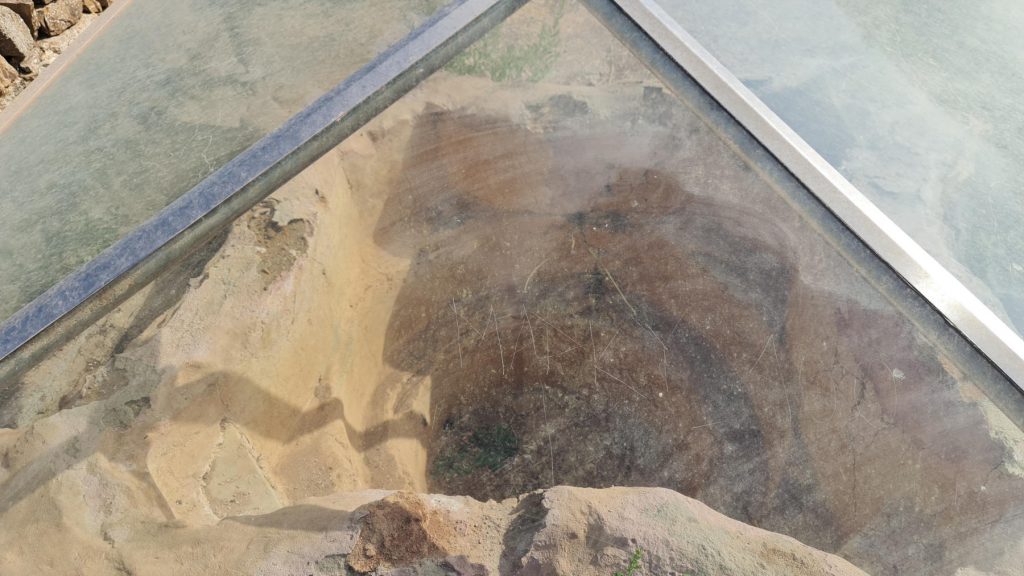 with steps down into an immersion chamber. Apparently the church (discovered in 1958) has been disused since the 7th century.

The trail continued through some very pretty scenery. 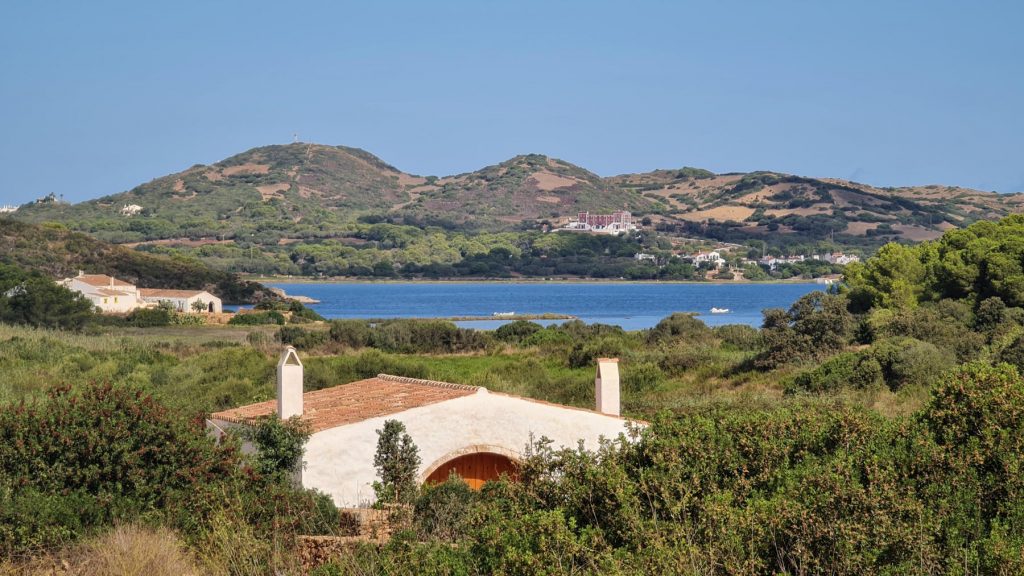 At one stage we saw some very nicely-done modern drystone wall construction, with some lovely patterns among the stones used 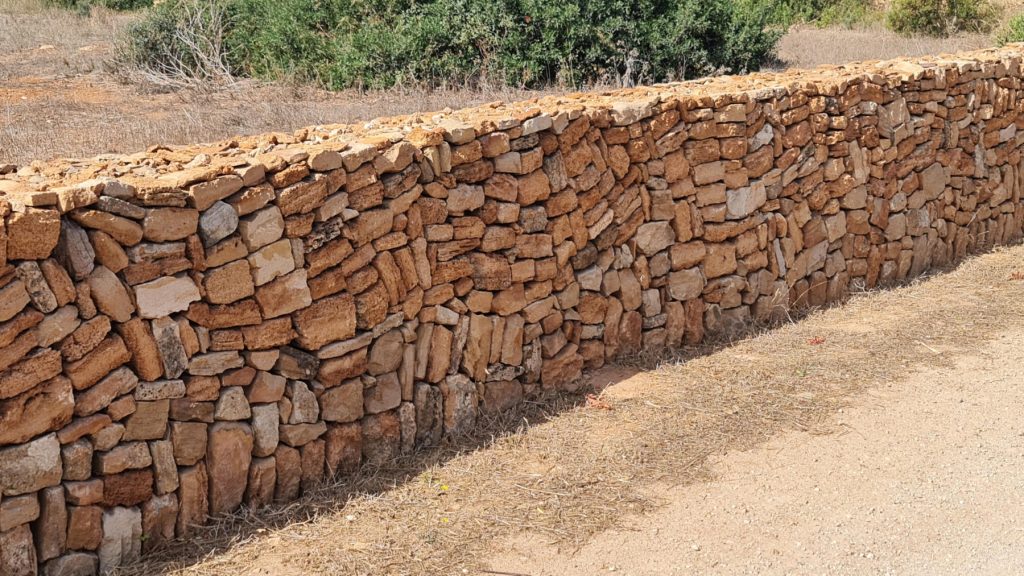 with, just beyond it for comparison purposes, an older stretch of wall 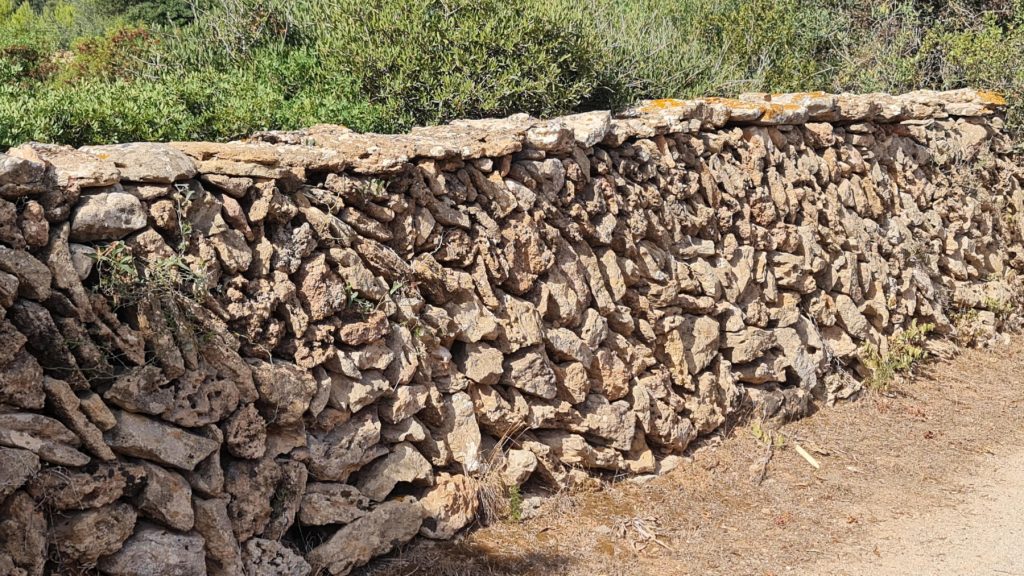 and, a bit further on, an Inca-style set of steps built into the wall, to make it easy to climb over. 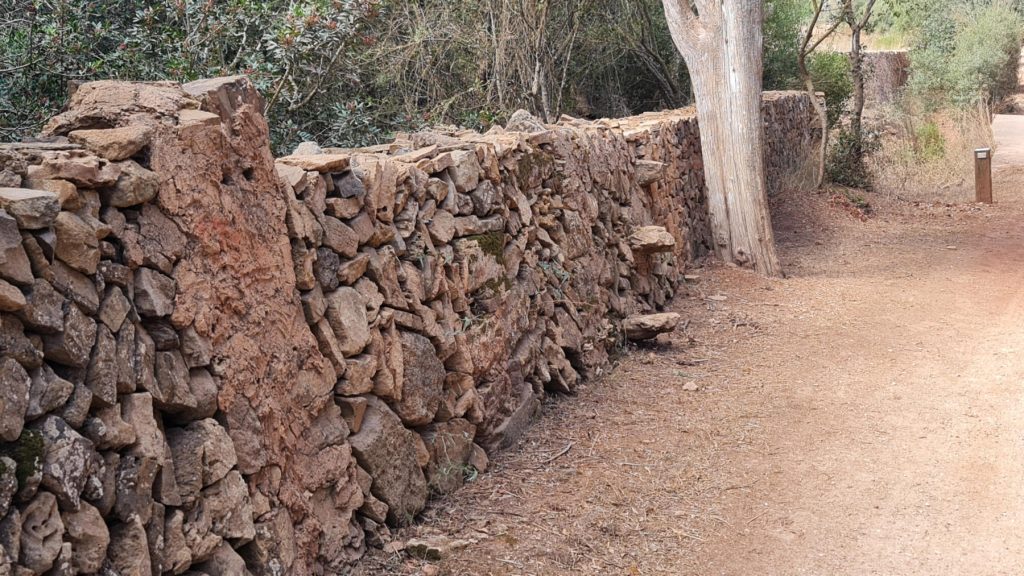 Shortly thereafter we came to tarmac, which led, via about 2.5km of rather unrewarding walking on a busy road, to the end of our day on the trail. 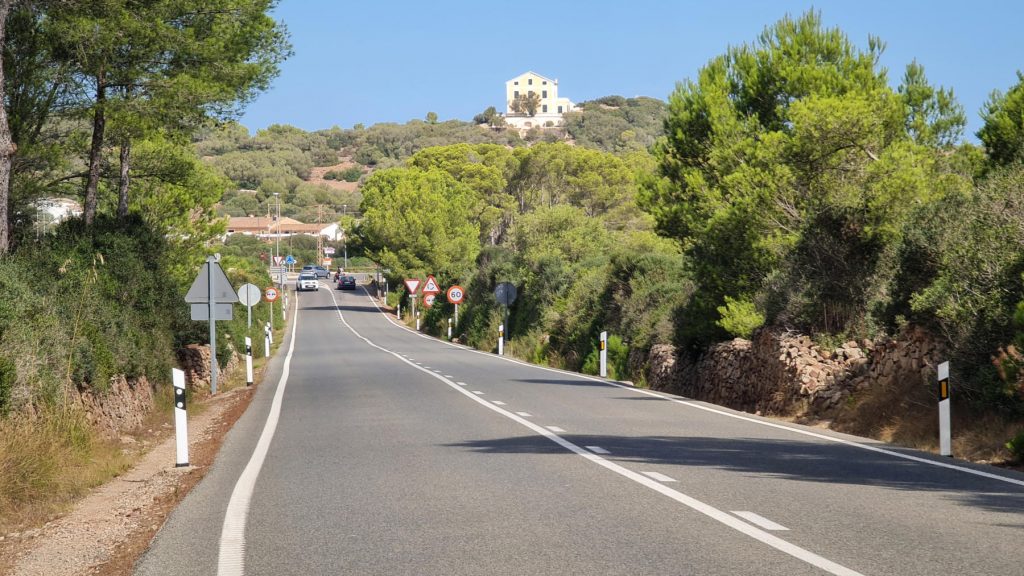 We noted an interesting decoration on a roundabout 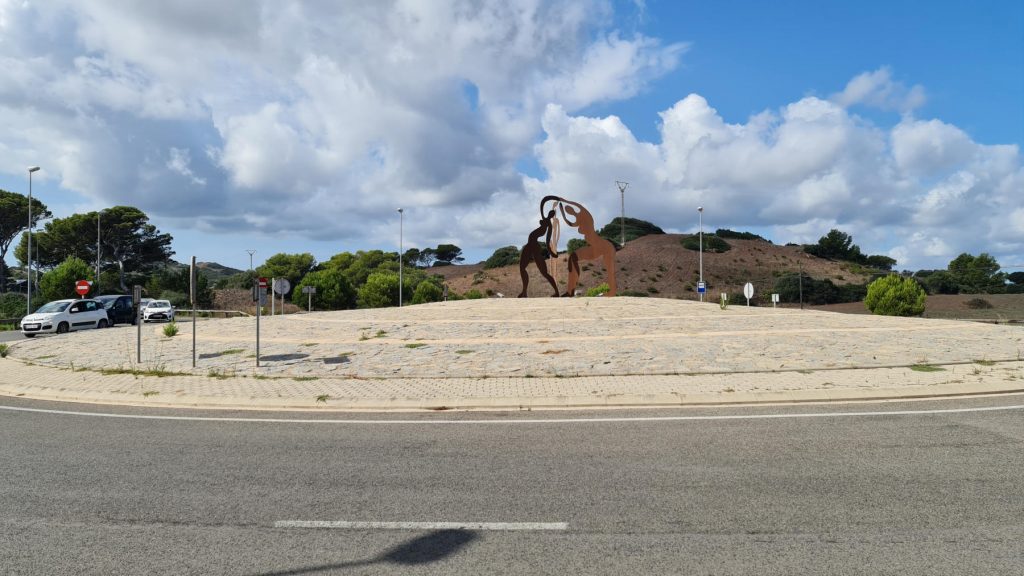 and some handsome properties by the waterside. 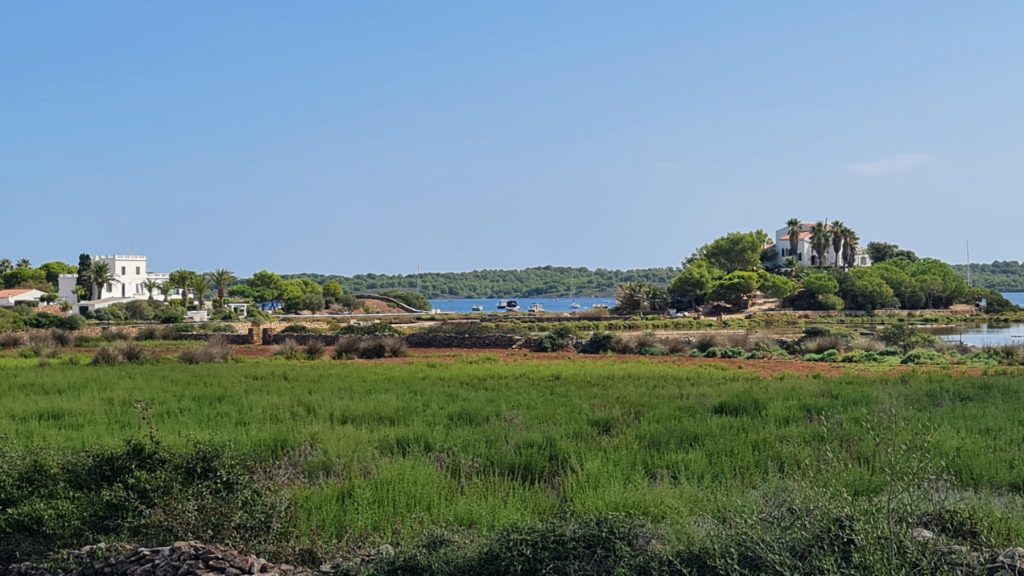 Eventually, the road bears left, as does the Cami de Cavalls trail, 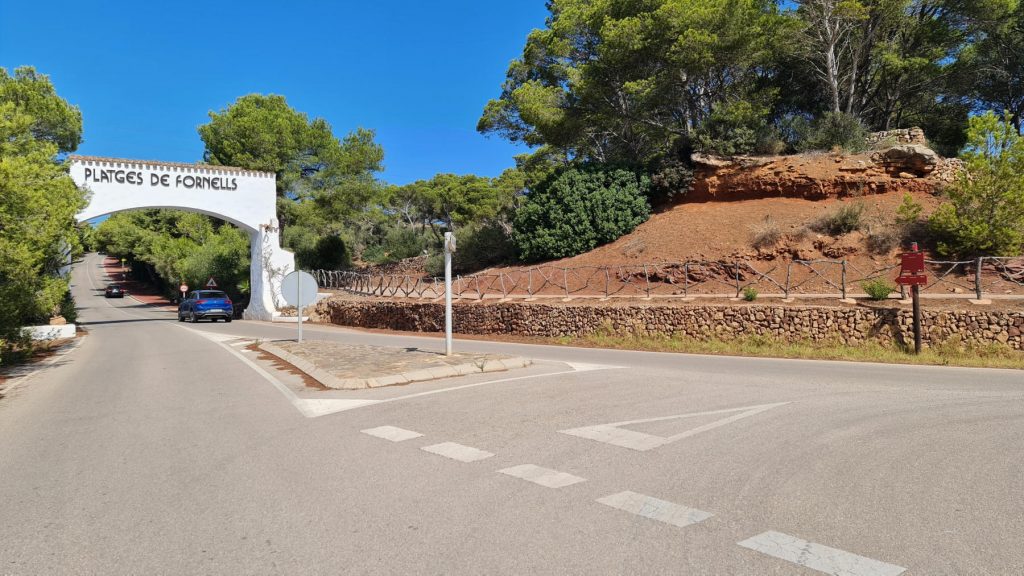 but our destination was straight on to Ses Salines and our overnight accommodation. There’s a mystery building high above the road to Ses Salines 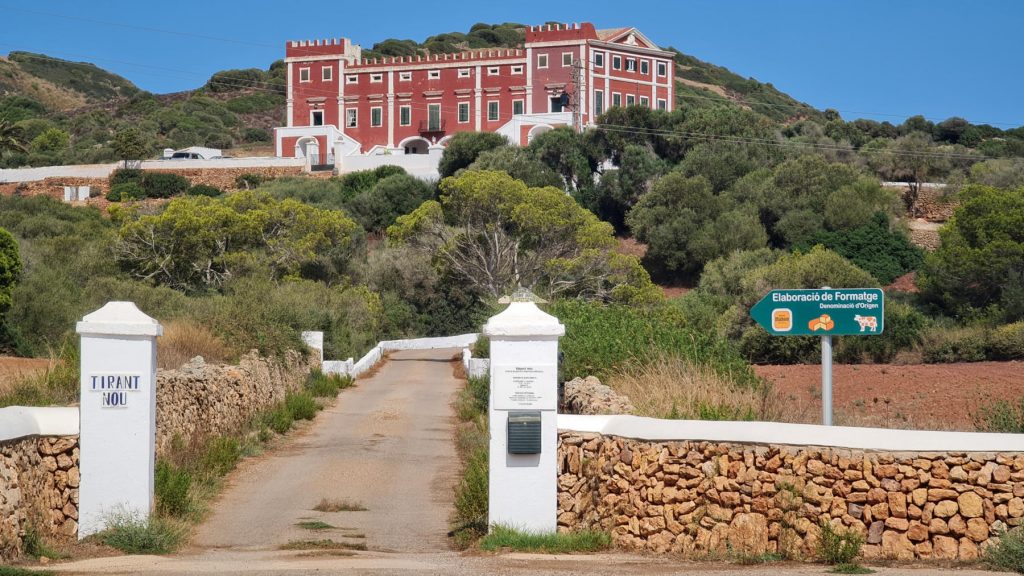 We don’t know if such a grand place could be just a cheese factory, and it doesn’t appear to show up on Google Maps, so we’re not sure what it is. But it’s an impressive-looking establishment, and it actually figures in the view from our accommodation, which is the Hostal Port Fornells. This bills itself as a(nother) family-run establishment, and it’s fairly basic, but our room is quite large, has a balcony and is spotlessly clean. The place has a lovely garden with some striking flowers. 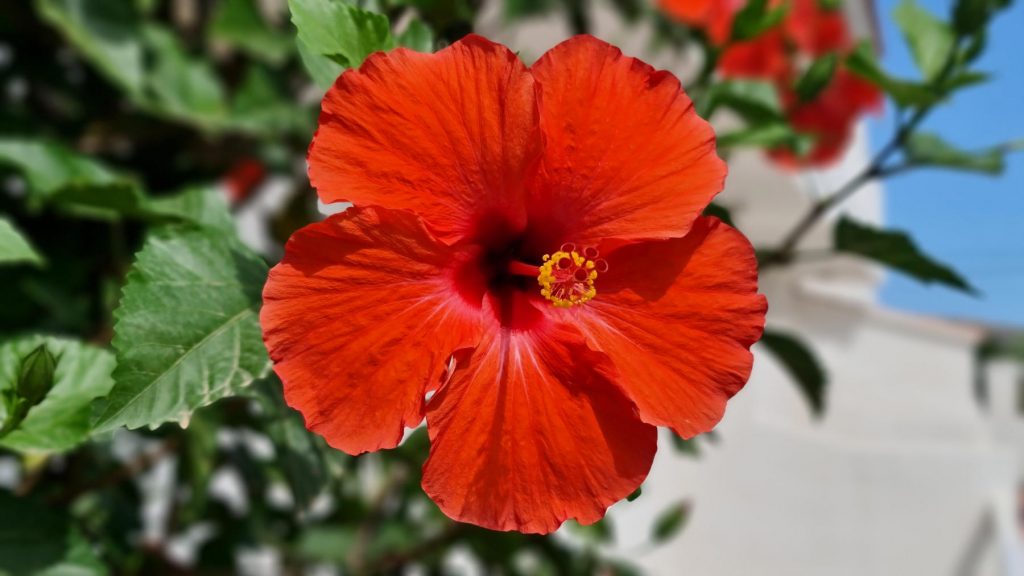 As at White Sands, there was some confusion about the booking and the name of Charlotte Hayward came up again, to further fuel my suspicions about the distaff side. It turns out the mysterious Ms Hayward is the booking agent for Fred Holidays, under whose aegis we are in Menorca, and looking into the details of the booking reveals our names; so we know how to avoid confusion in future. We hope.

A nice little vignette happened when we handed over our passports to Daniel, the chap behind the registration desk. He beamed and said “Ah, you’re English! It’s so nice to have English people back again!”

Sadly, events had overtaken the Cami360 team and some last-minute scheduling changes meant that we had made it to Ses Salines some two hours before we could expect our baggage. So there was nothing for it but to head into Fornells, a fishing town about a mile down the road, for some lunch.

The walk took us past some rather attractive rustic fencing 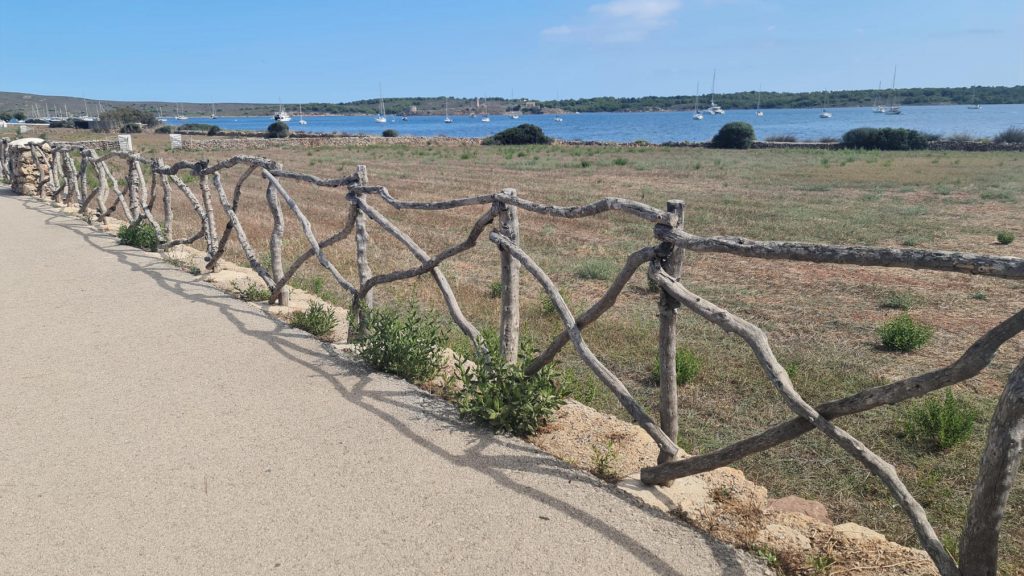 and a traditionally- but, we think quite recently-built well 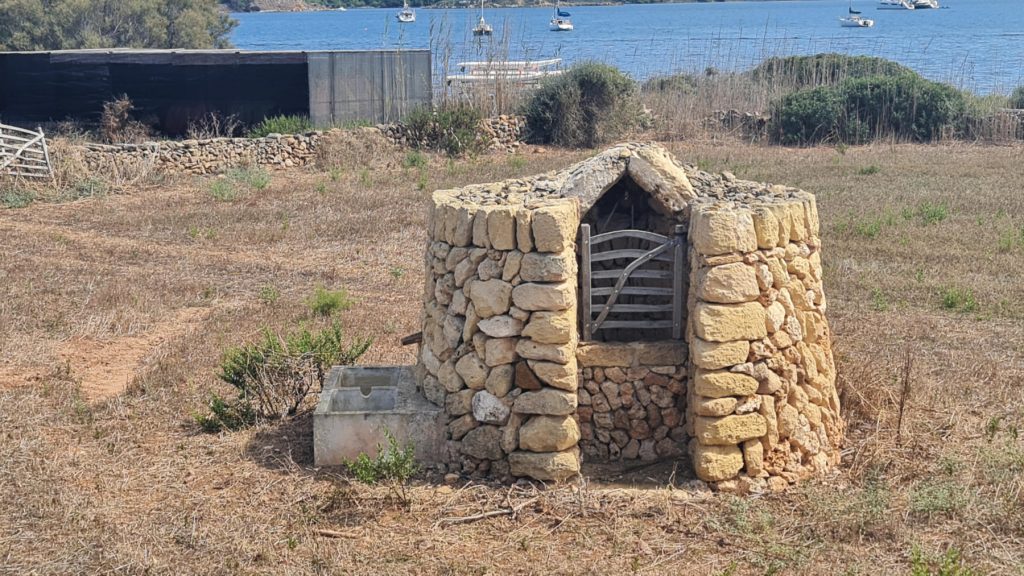 into Fornells, which is a real fishing village, based upon real fishing. It features a restaurant well-known across the island, called the Cranc Pelut, which is Catalan for Hairy Crab. Lobster stew and paella are among its specialities, apparently. 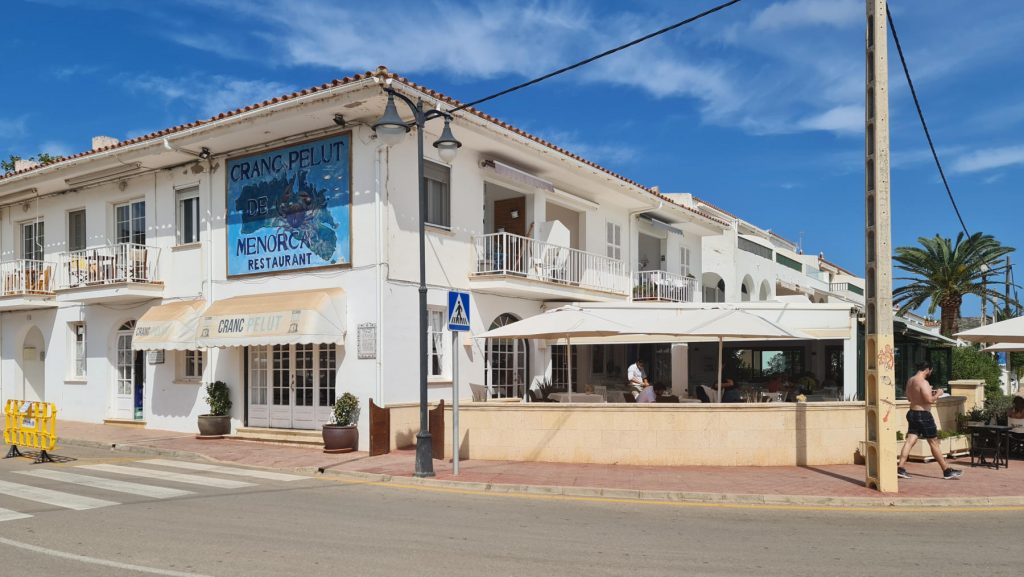 We near as a toucher took lunch there, but decided to walk on to re-acquaint ourselves with Fornells, to which we’d had a flying visit a couple of years ago. It’s a very attractive place. 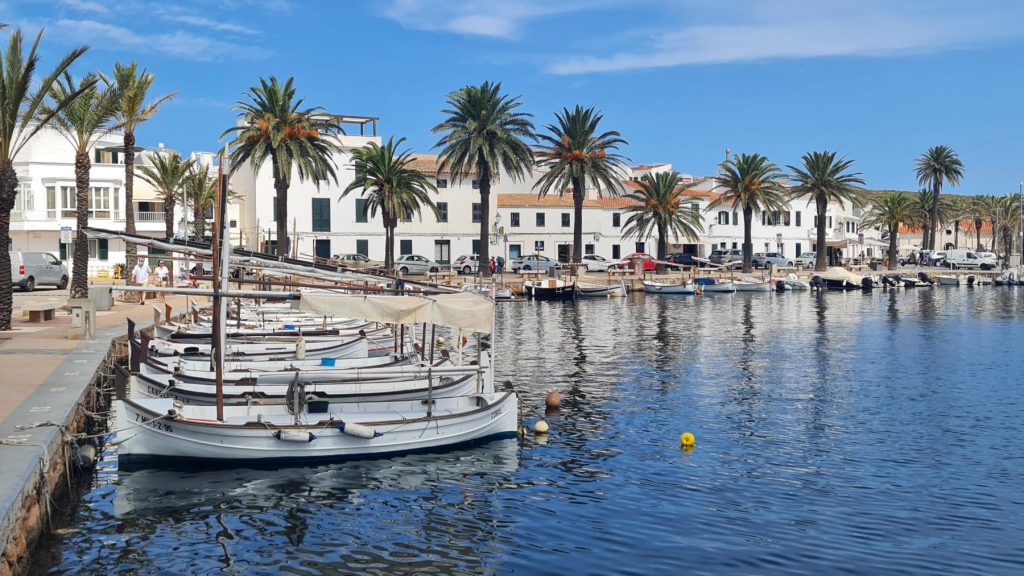 and as one would expect, it features many many seafood specialist restaurants. We decided to lunch at El Pescador, and a very fine lunch it was, too; slightly eccentric service, but delicious food.

After lunch we wandered across to the other side of the harbour, where we found a very strange object. 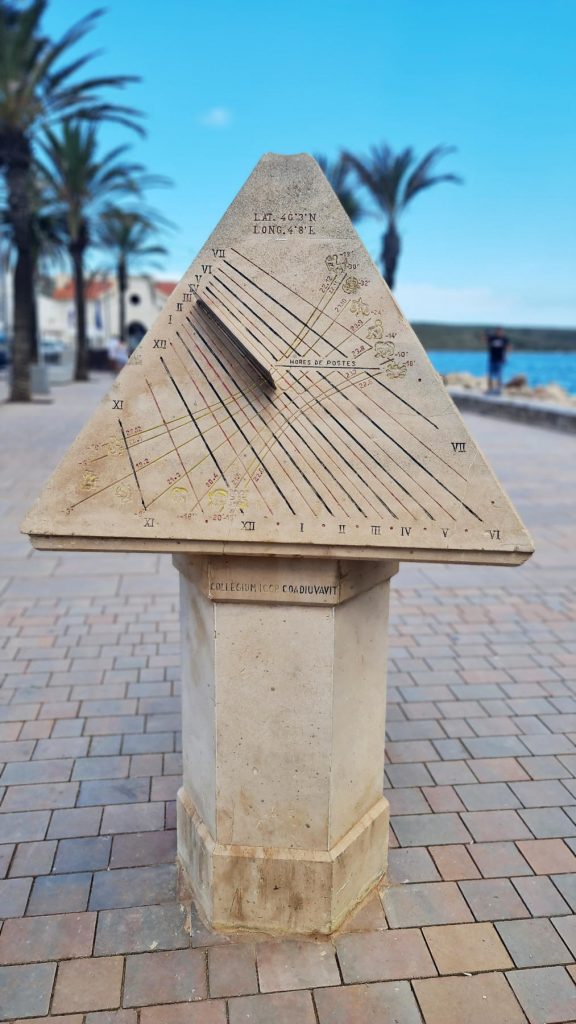 We’re really not sure what this is trying to tell us. One of the other faces is a standard sundial, though. 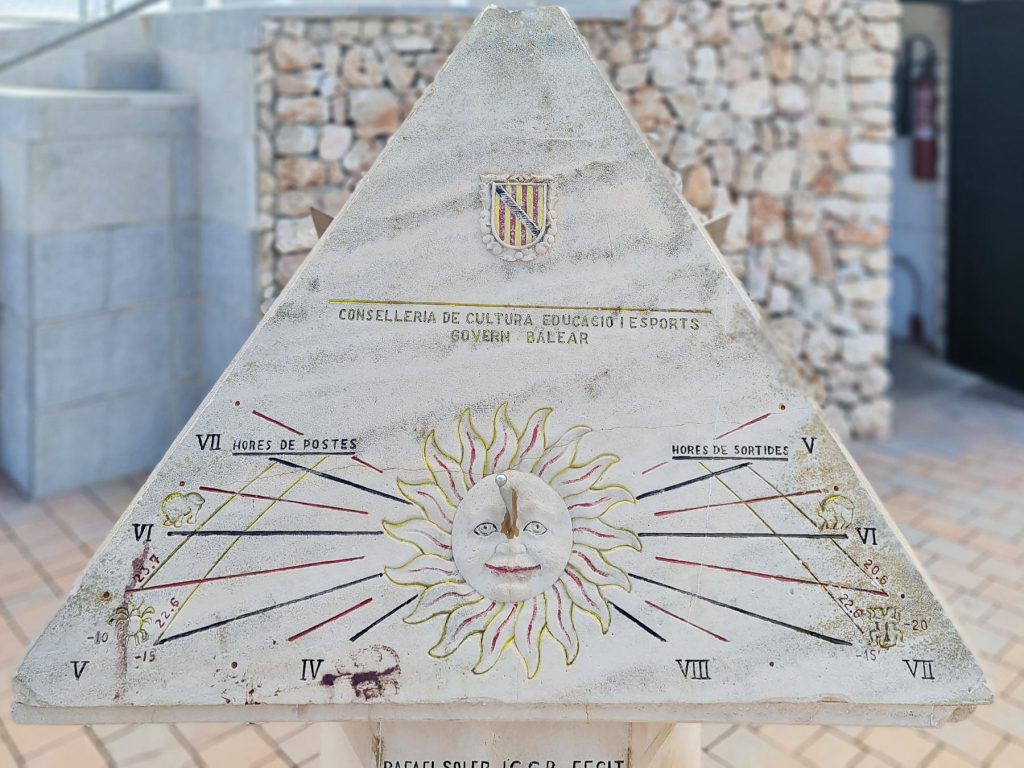 That side of the harbour is the mooring point for many more fishing vessels, and some of them are dedicated to catching for restaurants in the town. 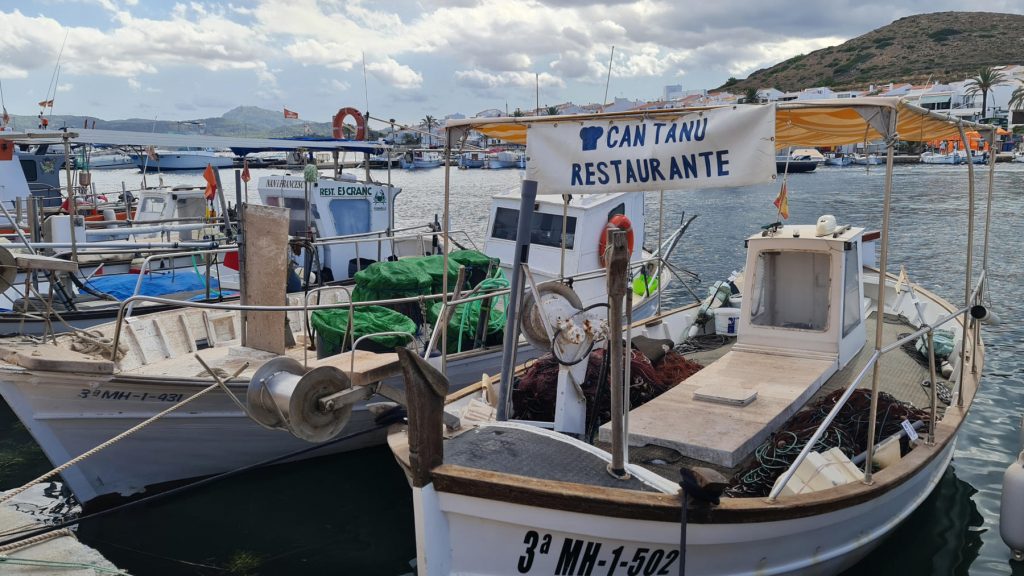 You can see one of Es Cranc’s several boats in this picture, for example.

Thus, full of lunch, we tottered back to the hostal, where our bags awaited us. The rest of the day has been spent furiously relaxing and working out what the schedule is for tomorrow. The day promises to be about the same intensity as today’s, i.e. quite light, but we have to rendezvous with the Cami360 people to be picked up and brought back for another night here, so we will not be quite as carefree as today.

The stats for today – 6.8 miles covered, and 140 metres vertical. (Our running total, or rather our walking total, ha ha, is now at 31.92 miles for the 3 days of the Cami so far.) Tomorrow will be comparable. The day after that, though, is likely to be a savage one so we’re just starting to psych ourselves up for it. Stay tuned to the blog and you will find out how things go!