Wednesday 9 October. With effectively two days left of our holiday, we had a significant decision to make – lounge about doing nothing or Get Out And Do Something?  Realising that the former would be a big part of our lives once we got back home, we resolved to do the latter and Jane (who else?) came up with a plan, which was to do walk no. 4 in our “Landscapes of Menorca” book. This was described as possibly the most interesting walk on the island, and was 10 miles long, which seemed achievable, given the presence of cafes en route to seek refuge from the pitiless sunshine that was forecast.

During the first half of the walk, I was beginning to have a Peggy Lee moment: “Is this all there is?” because frankly we were just slogging along roads (albeit quiet country lanes) and tracks in the streaming sunshine with little more than dry stone walls and fairly arid fields to look at.  There were occasional highlights, such as this mystery object 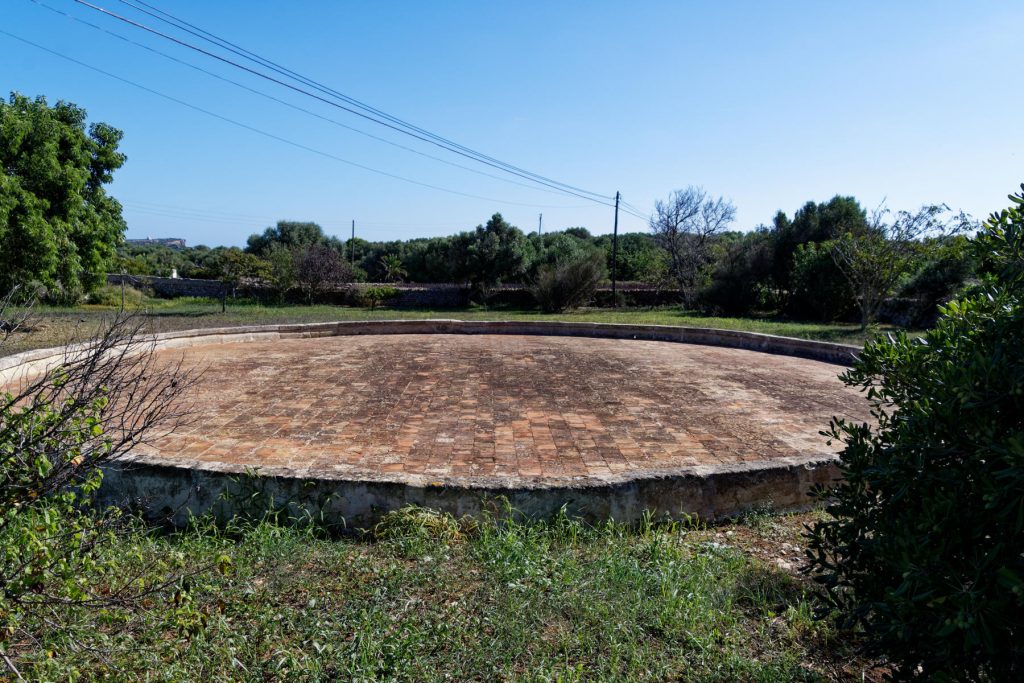 (later identified as a threshing floor*), defensive towers (set up historically to defend against pirates rather than the modern invasion of tourists) 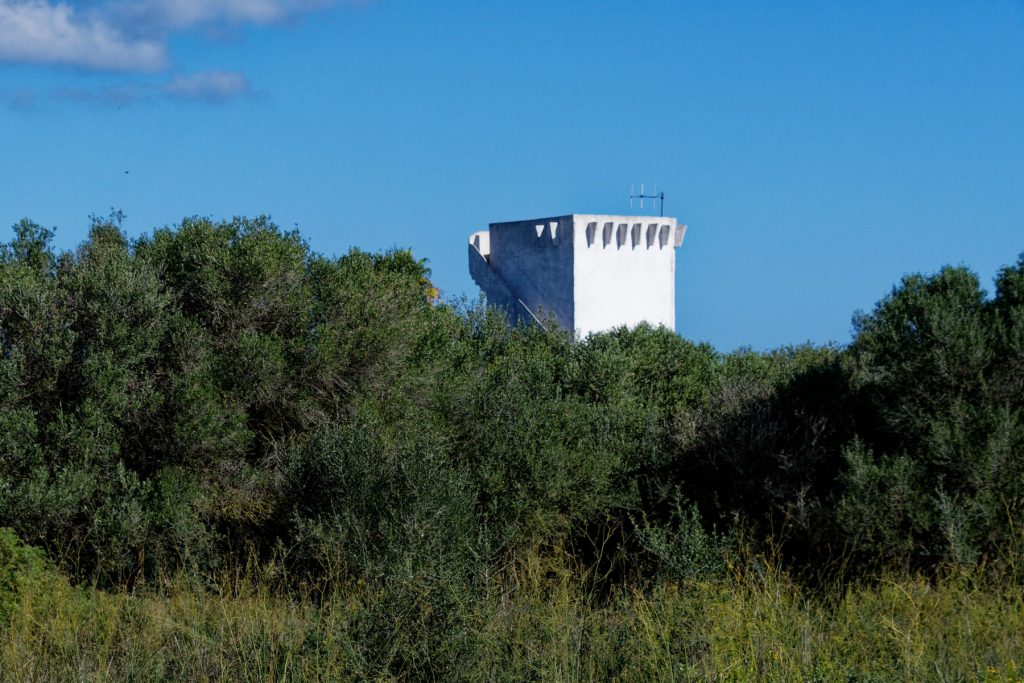 and some charming properties, many with the bentwood gates made from wild olive trees that are typical of this region. 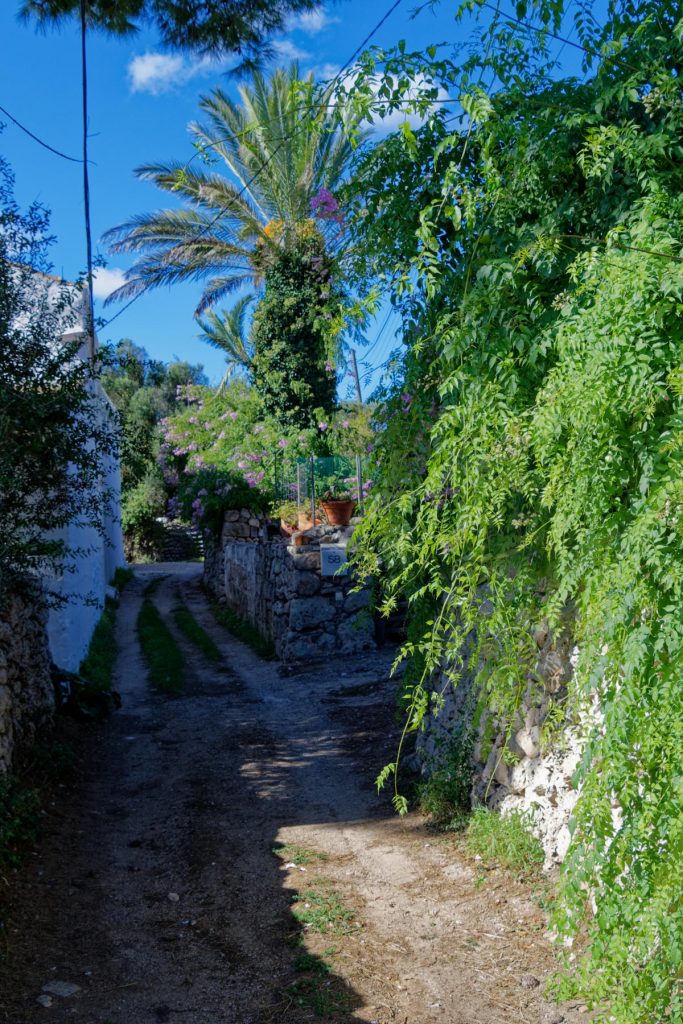 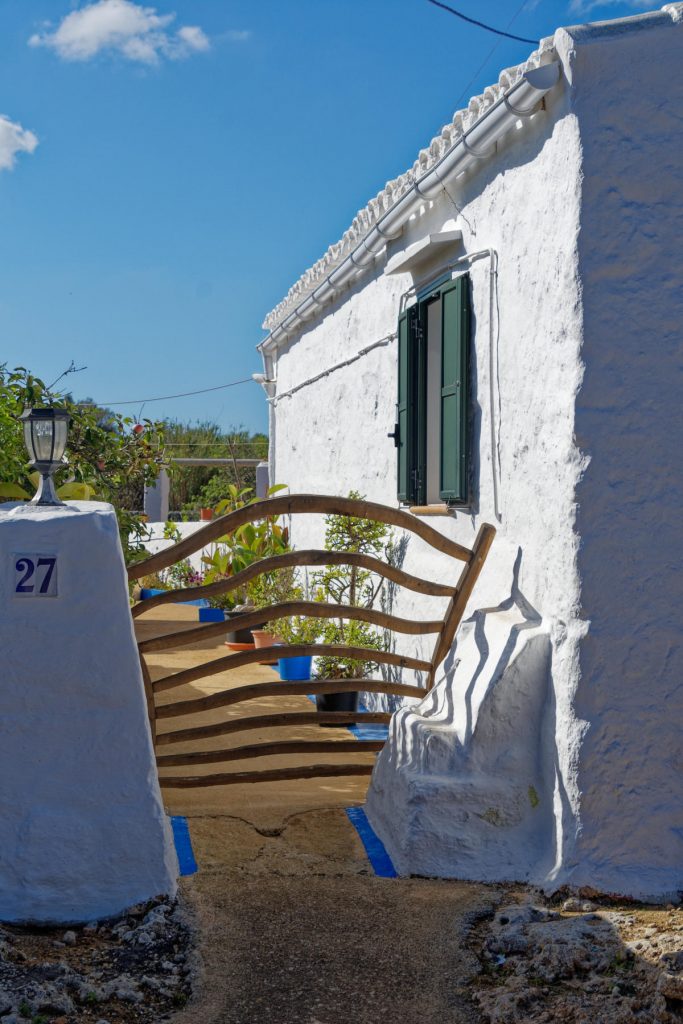 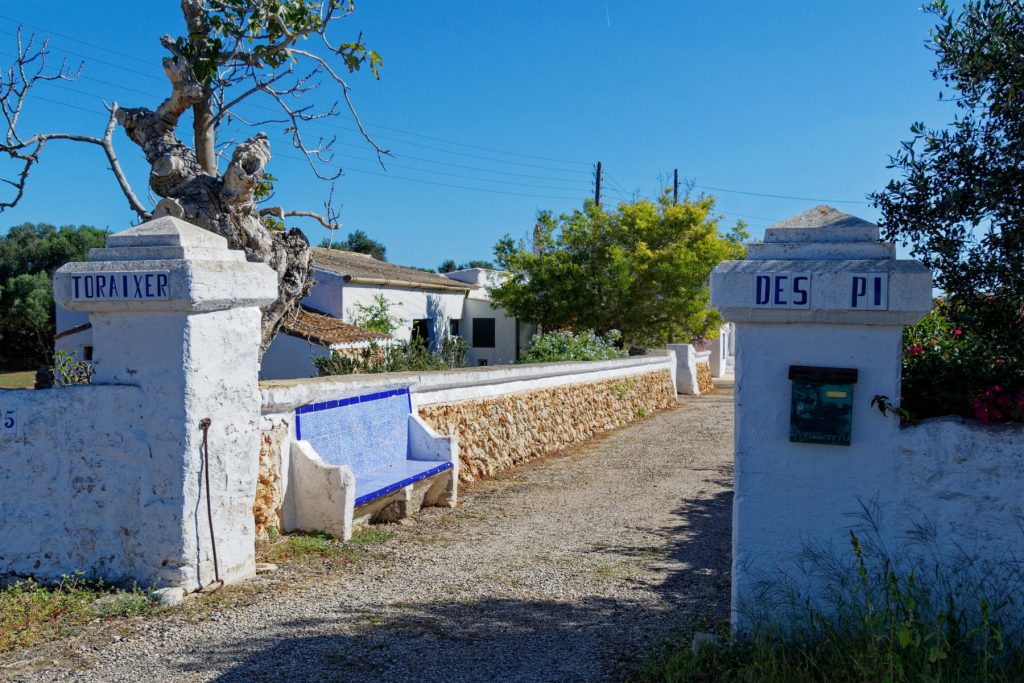 However, at the halfway stage, as we turned to come back in the general direction of Mahon, things suddenly got more interesting.  We left the formal road/track/stonewall infrastructure for a  more open track across scrubland which had much more appealing views 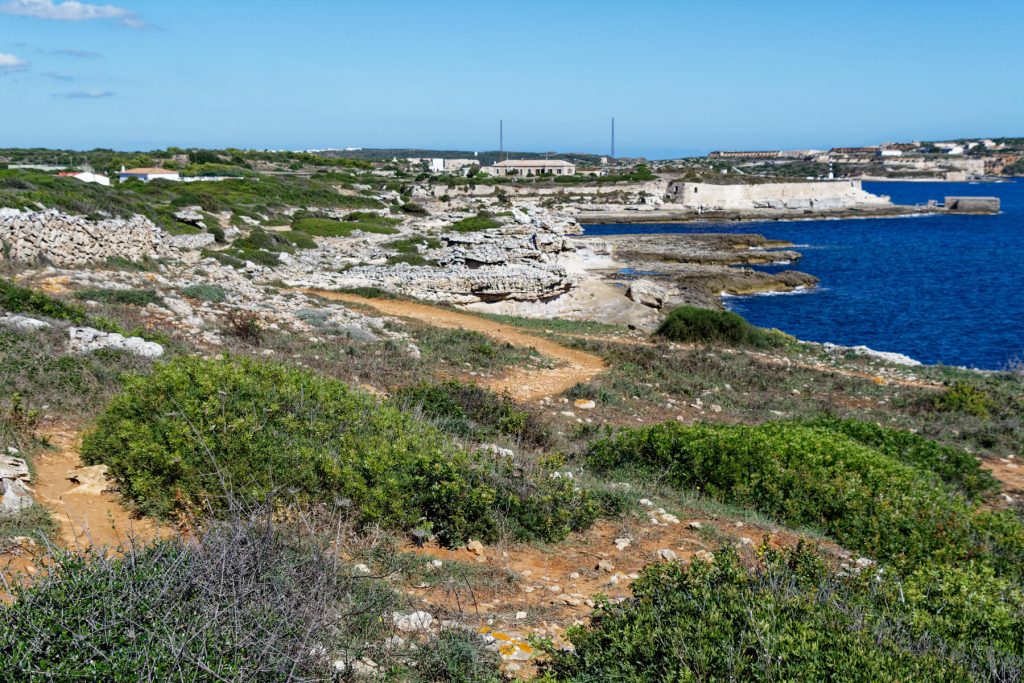 and among which some more interesting wildlife could be spotted (or, possibly, striped). 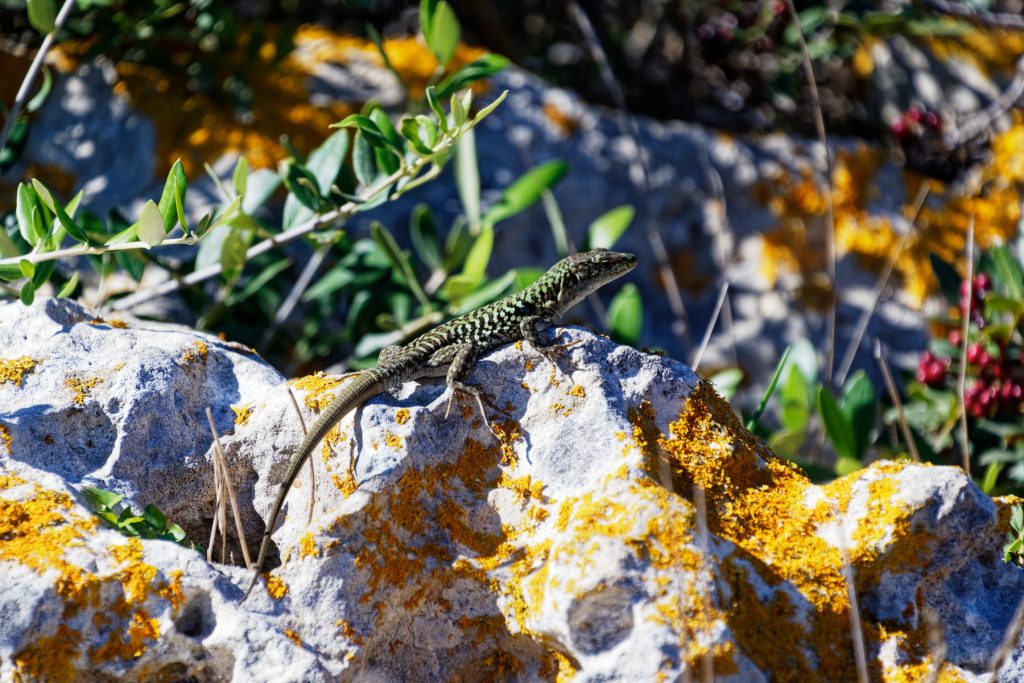 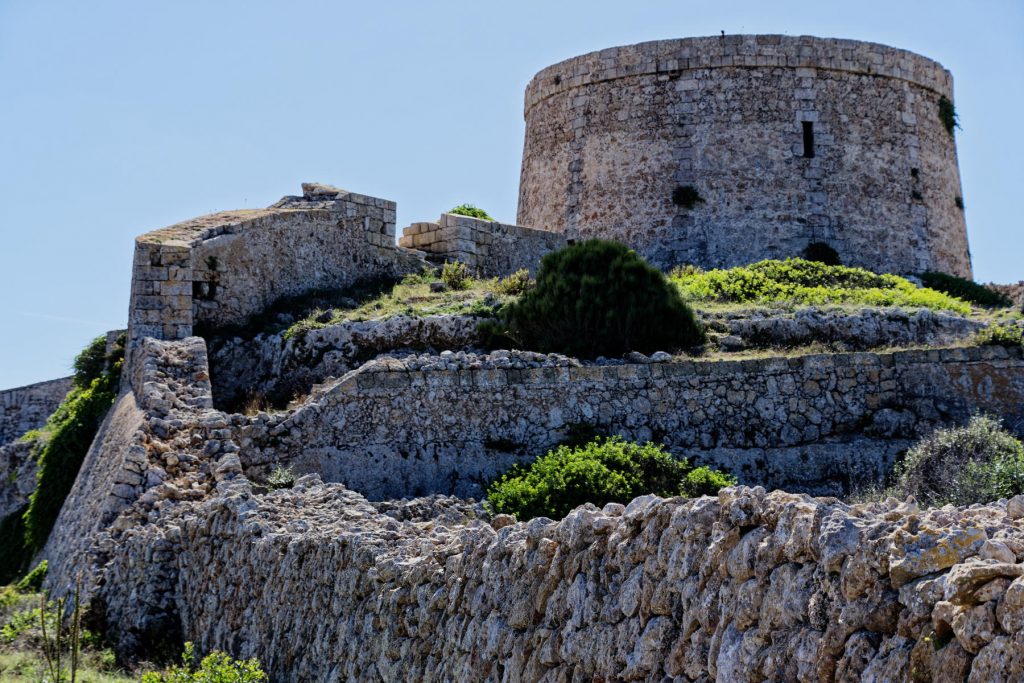 as we headed towards the ruins of the Sant Felipe fortifications which are what lend the suburb of Es Castell its name. 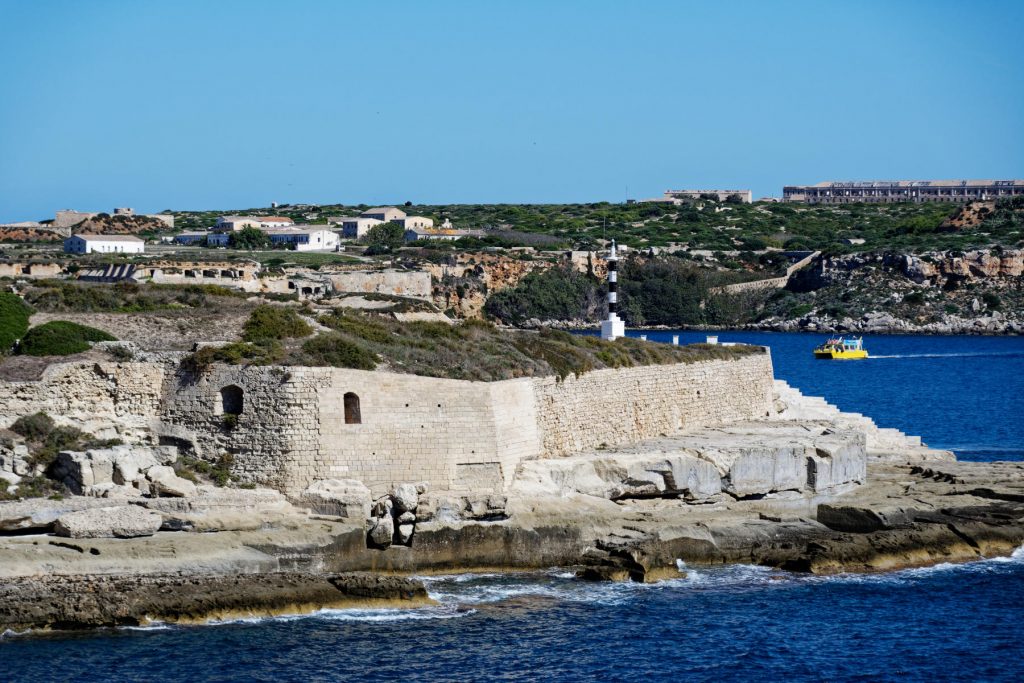 (just beyond the fortifications is one of the yellow “glass-bottomed boats”; catamarans which offer tours of the immense Mahon harbour.

This area has a lot of military overtones, both current and historical. As we carried on our way, we passed other historical remnants of fortifications and approached the area of Fort Marlborough with its crossfire redoubt which enabled 50 British soldiers successfully to defend against 700 French 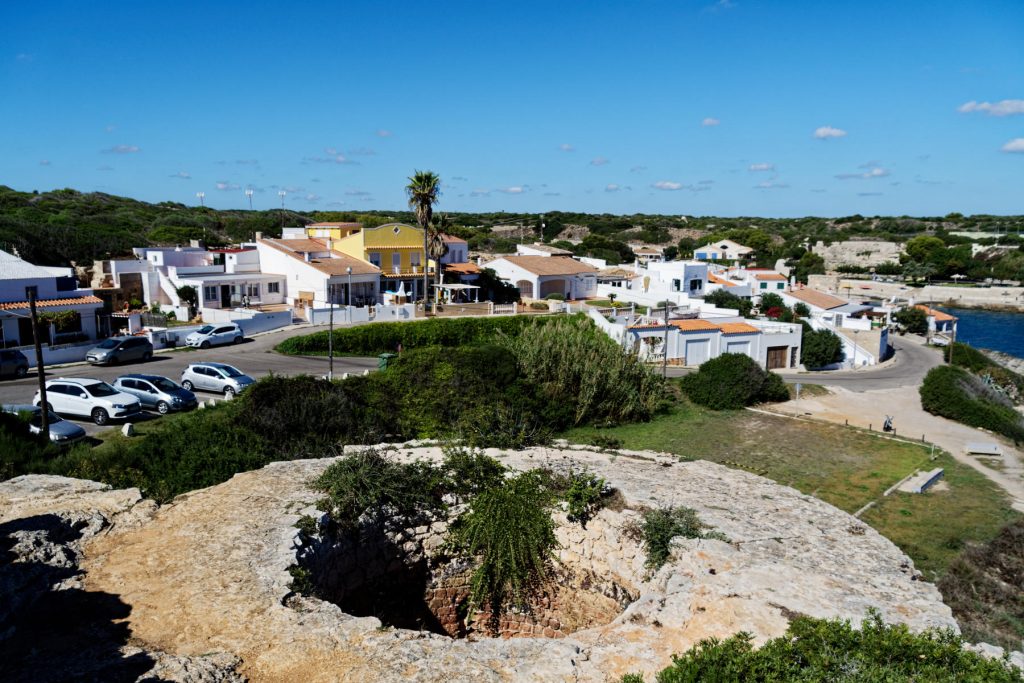 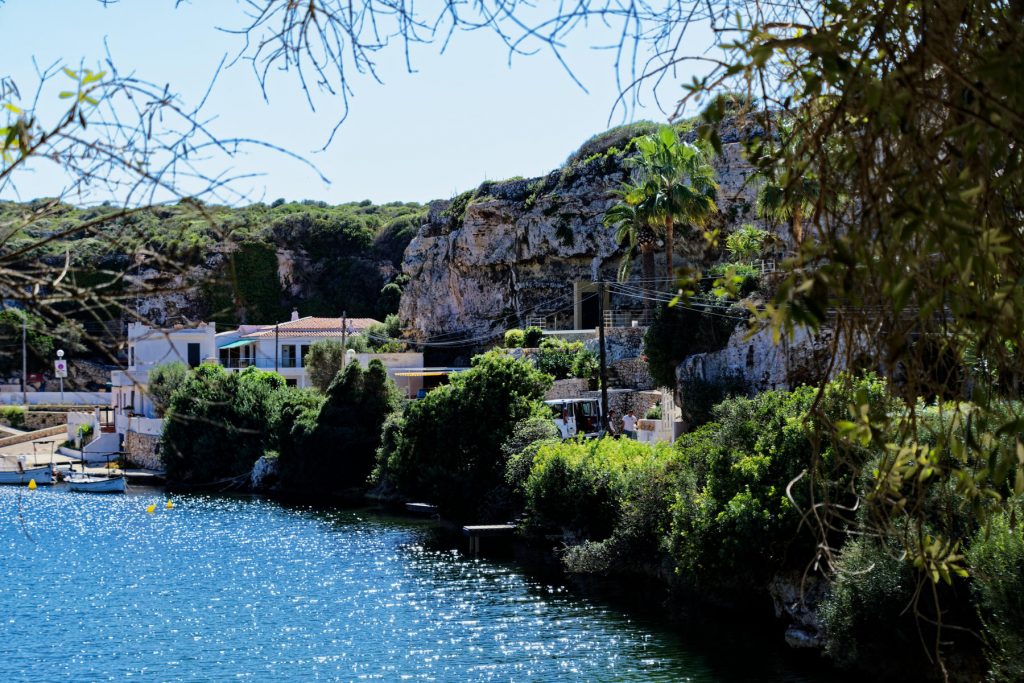 as is the rest of the walk back to Mahon, which starts with something billed as possibly the oldest road in the island, of Roman construction, and part of the “Cami de Cavalls” track which is a 180km track going right round the island. 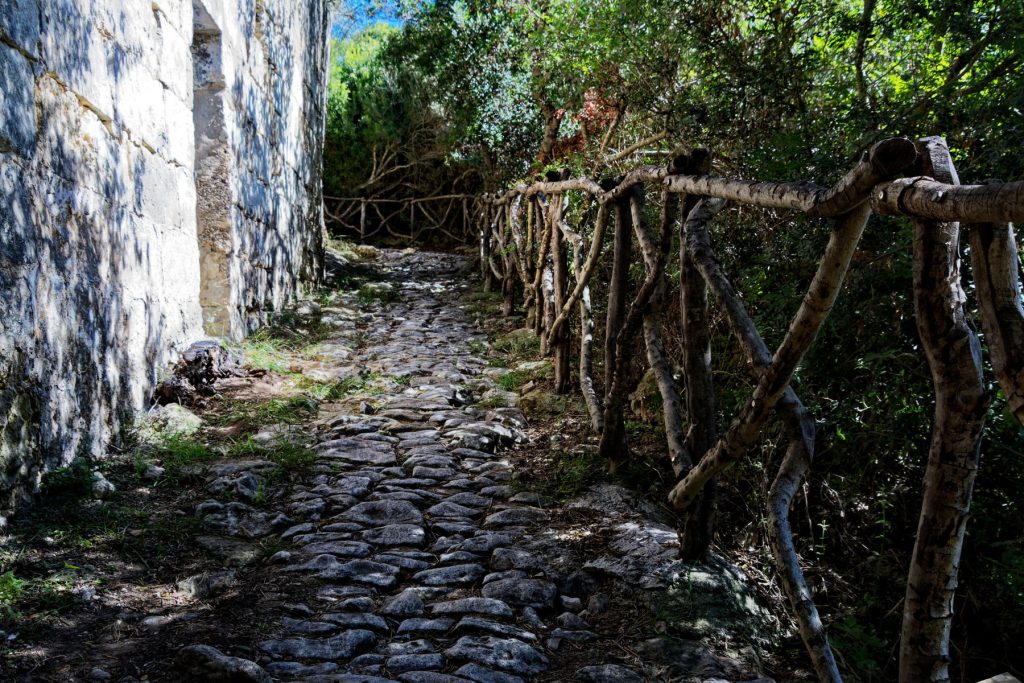 We had been walking in direct sunshine for some time – over two and a half hours – by this stage and something which buoyed my progress no little was the prospect of a rest at a cafe nearby.  Sadly – tragically! – this was shut and we had to soldier on with no respite from the pitiless heat of the sun.  Fortunately, it wasn’t too much further until we reached Cala Es Fonts, the main harbour area of Es Castell, which was (a) pretty 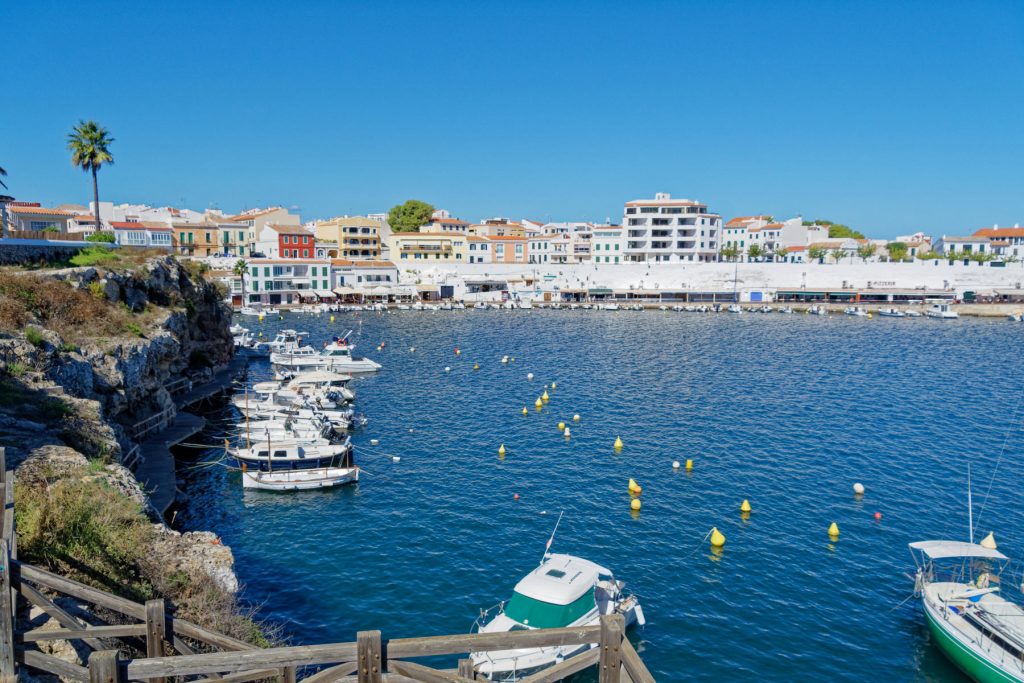 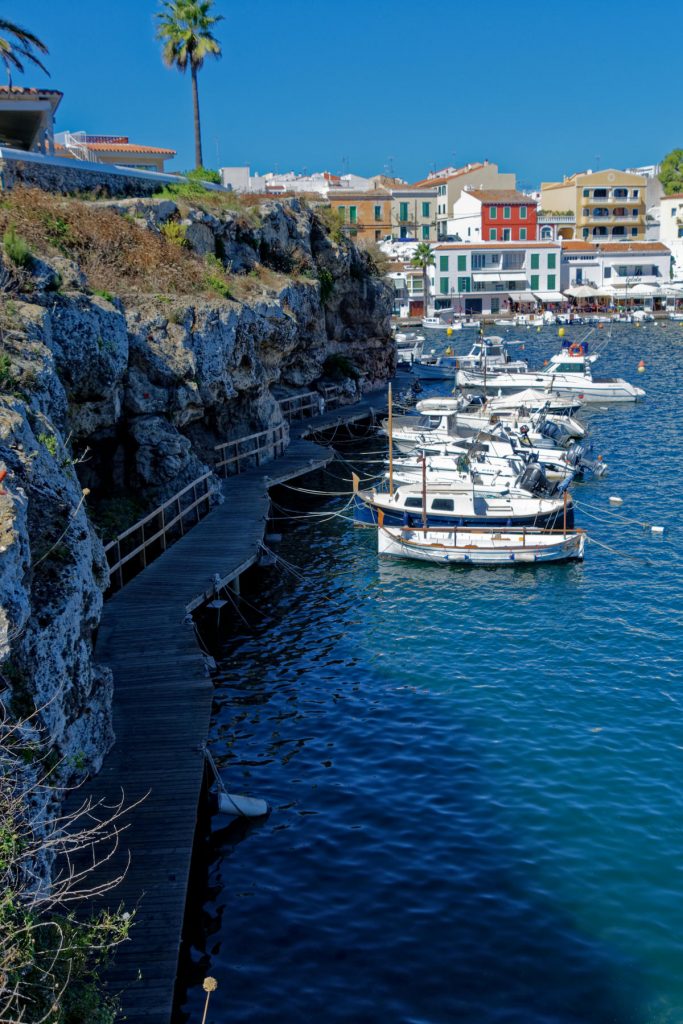 and (b) featured shade and refreshment in the traditional form of cafes and restaurants.  We found ourselves too weak to pass the first one, which was engagingly called “Dinkums”; fortunately, it offered shade, coffee and beer, of all of which we greedily availed ourselves.  It’s really a very attractive area, and so are other parts of Es Castell, such as the Esplanade, with its historical buildings from the British rule 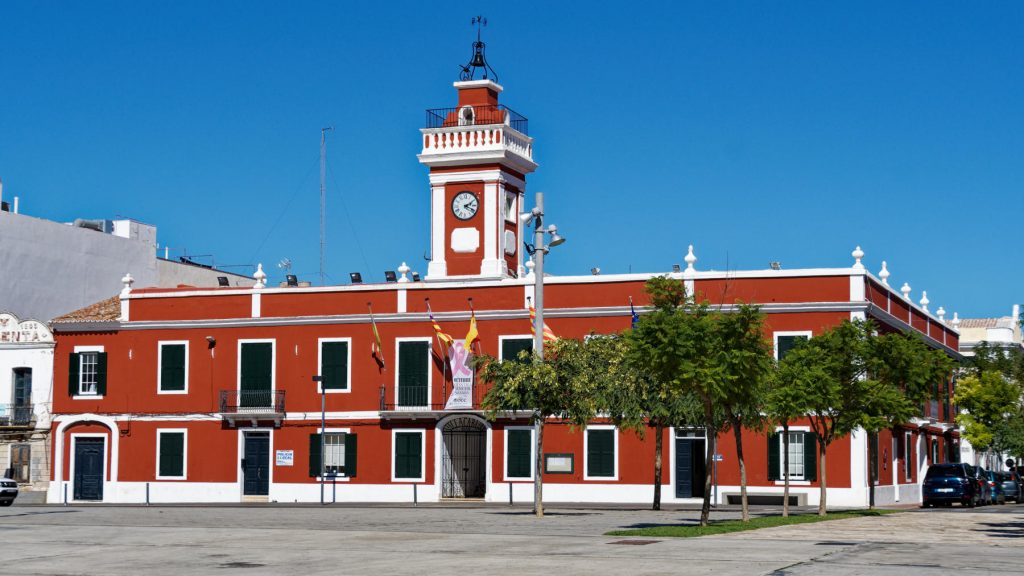 and its minor port, Cala Corb. 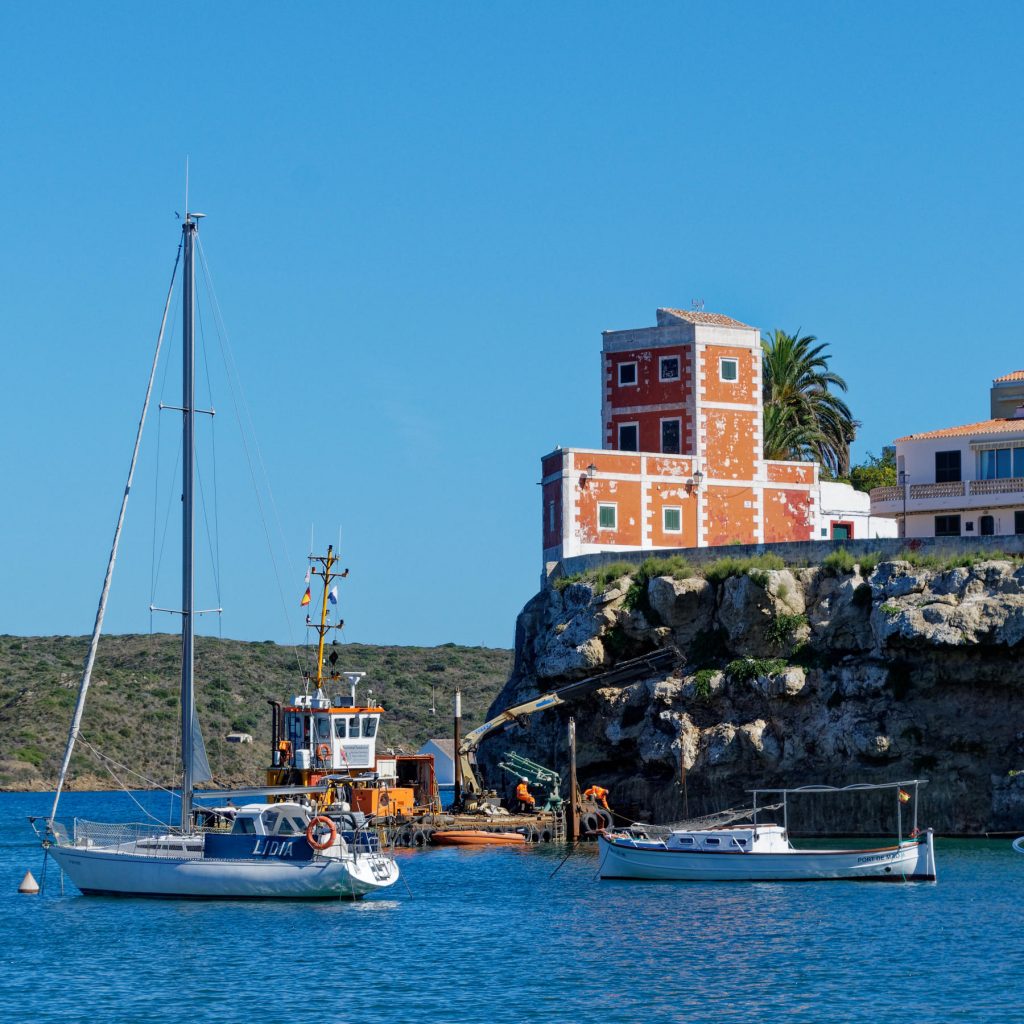 We pressed on towards Mahon, and had some great view of features of the port, such as the hospital island, used, inter alia, as quarantine for plague victims, 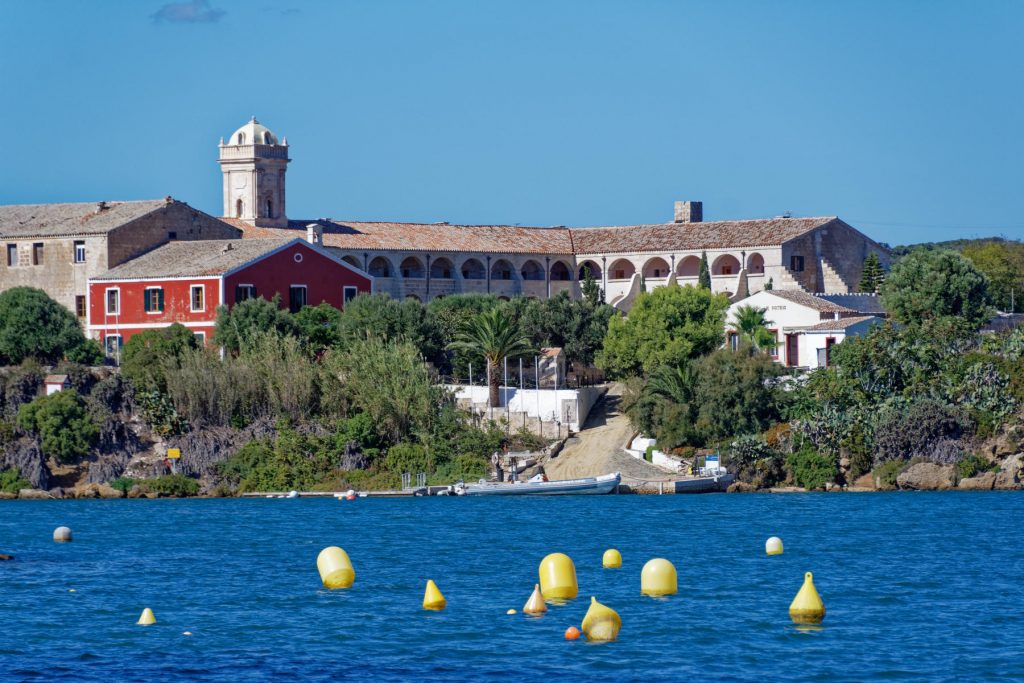 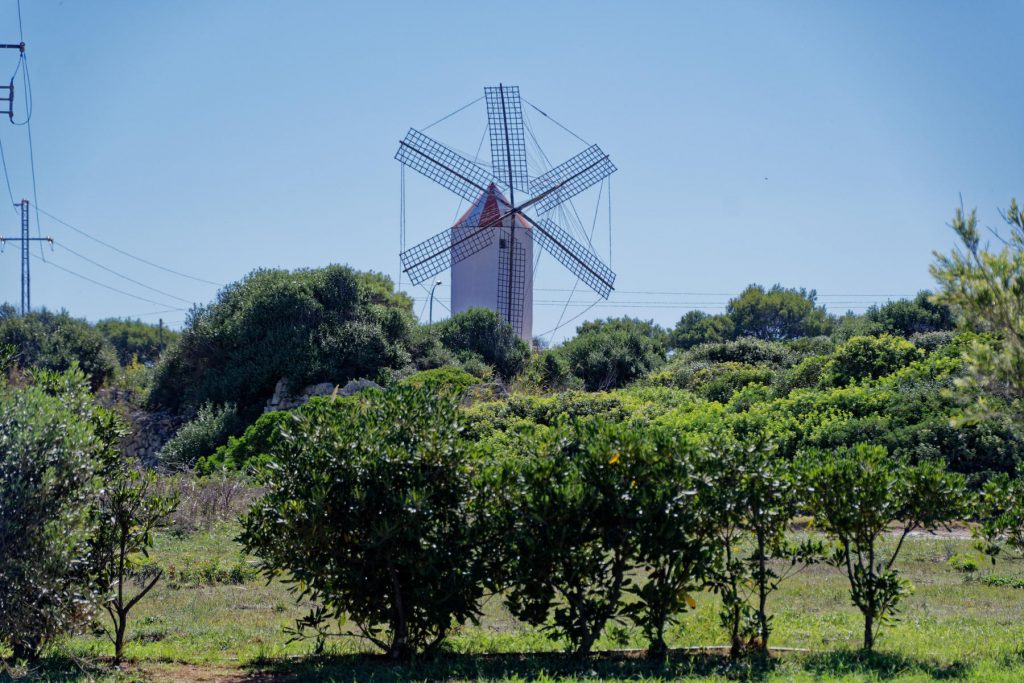 and another view of Golden Farm. 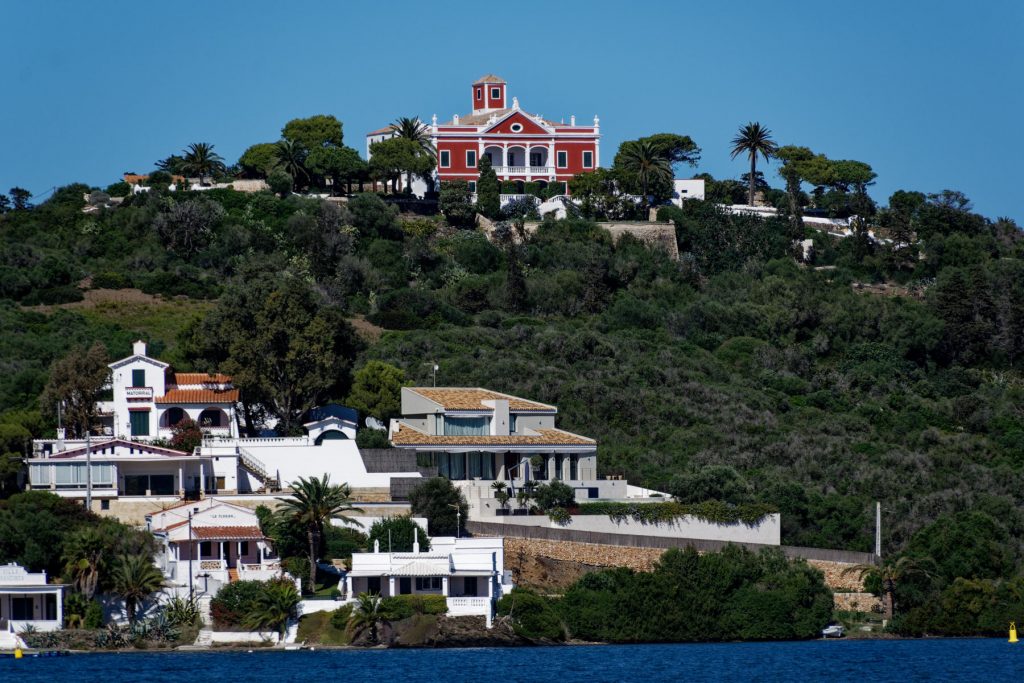 By this stage, we’d been going for some four hours and, it being about 3.30pm, the siren call of lunch became irresistible, particularly since we were at this stage passing the area of Mahon waterside which features back-to-back restaurants.  So we stopped off, once again, at Latitud 40, who did us proud, with some lovely grub.

As before, we took the cowards’ way (the lift) back up the cliff and walked the upper walkway back to our hotel for a Nice Cup Of Tea.  Followed, in my case by a nice G&T.

Tomorrow is our last full day before we leave on Friday.  There is at least one walk we could do using Mahon as a base, as we did today; so maybe that’s our option.  That, or slothfulness and packing.  Watch this space to see what happened, eh?

* Fascinating fact, uncovered by Jane in her research of the mystery object: when threshing was done not in a special area such as the floor pictured, but in somewhere like a barn, a bar or step was put in place across the door to stop the grain falling out: a “thresh hold”. There: never let it be said that this blog isn’t educational.

** This was going to be called “Fab Es Castell”, which I thought to be  supremely clever allusion to the Faber-Castell of my childhood – supplier of paintboxes and slide rules to the young of that era. It got such a blank look from the distaff side that I abandoned the idea, but didn’t want it to die without at least a little exposure….