Saturday 28 September. Yesterday’s antics in caves smacked a little uncomfortably of being tourism, so today is reserved for holidaymaking, although we decided we had to earn the privilege by going for a short walk after breakfast, i.e at about 11.30.  Accordingly, we girded our loins, or clad them in Rohan, which is emotionally the same thing, and set out along the road, clutching the hotel’s booklet about local hikes – particularly a short one which led to a lovely viewpoint over the valley – and Jane’s phone with Google Maps active. The latter turned out to be not quite a mistake, but something of a misdirector.

As we walked along the road to the point where our track turned off, it became ever more apparent how popular Mallorca is with cyclists; and furthermore, since we’re in the lumpy bit on the left of the island, cyclists of a particular grim, determined fitness. It wasn’t quite a stream of lycra-clad, piston-legged obsession passing us, but it could quite legitimately claim to have been a rivulet.  All the bikes seemed to emit that particular “I have a carbon-fibre frame, an SRAM chainset and an aerodynamic wheelset as well as an overpaid rider” noise as they whizzed past us.  On certain sections of this road, there’s a 40kph speed limit, which I think is intended for cyclists to observe; I bet half of them don’t. I’m impressed by their fitness, but wish they could look as if they were enjoying themselves more.

Anyhoo.  We reached the point on the road where we turned off on our track and soon started ascending to the point where we got a nice view of the village nearest to our hotel, Orient (my brother stayed at a hotel there on his recent holiday in these parts and said it was fab). 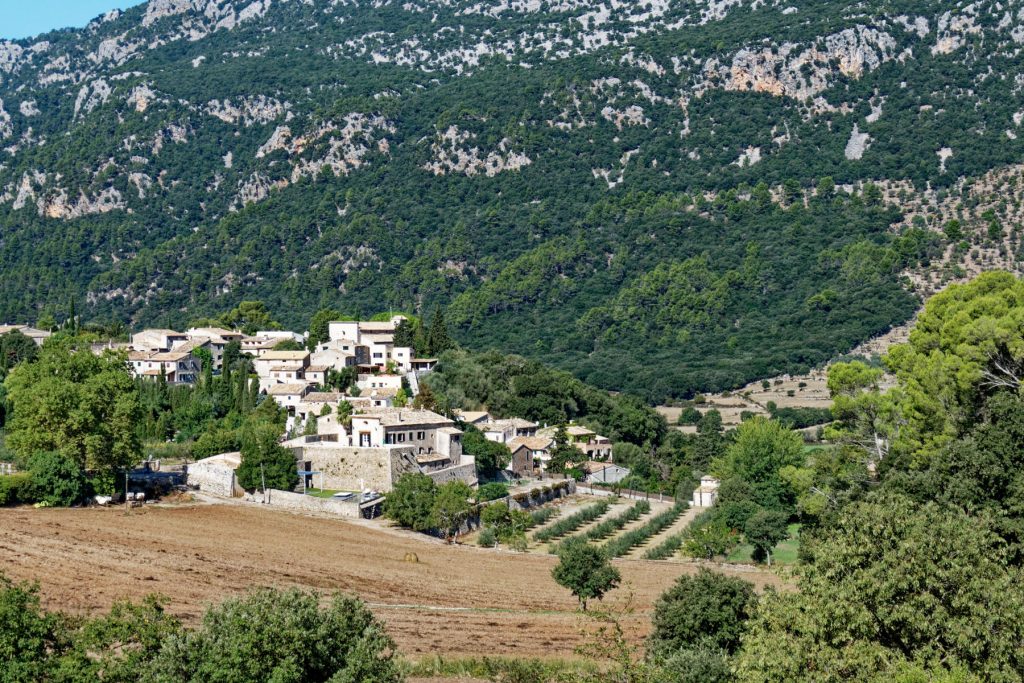 There were a few meanderings as we tried to make the description in the book match the reality as presented by Google Maps, but these rarely led to bad-tempered exchanges.  After a bit more ascending, we passed an ivy tree which was flowering and providing the bees with ever such a nice collection of pollen and any passers-by with a lovely buzz.

we had an interesting stile to climb over 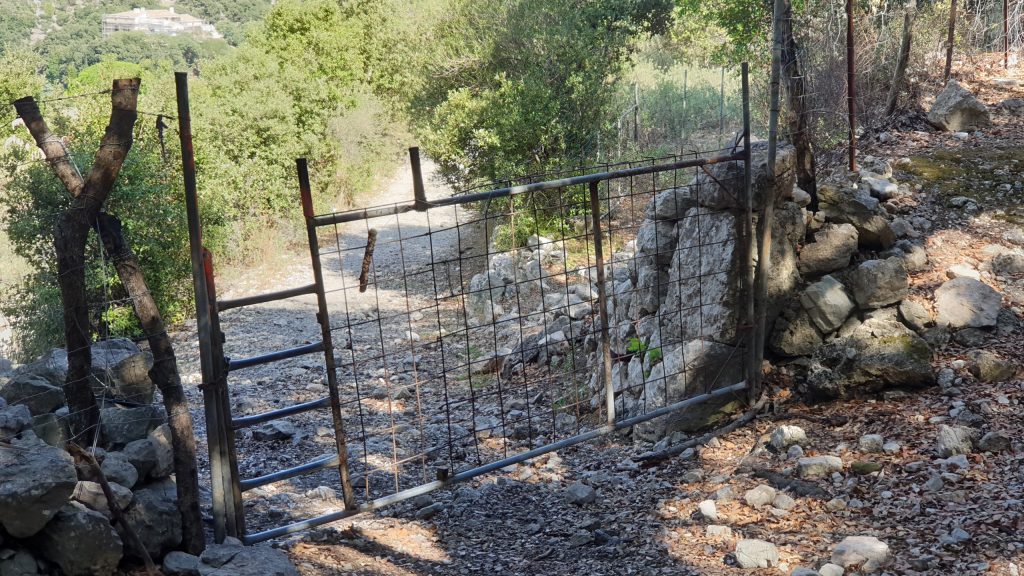 and walked along in delightful dappled sunlight. 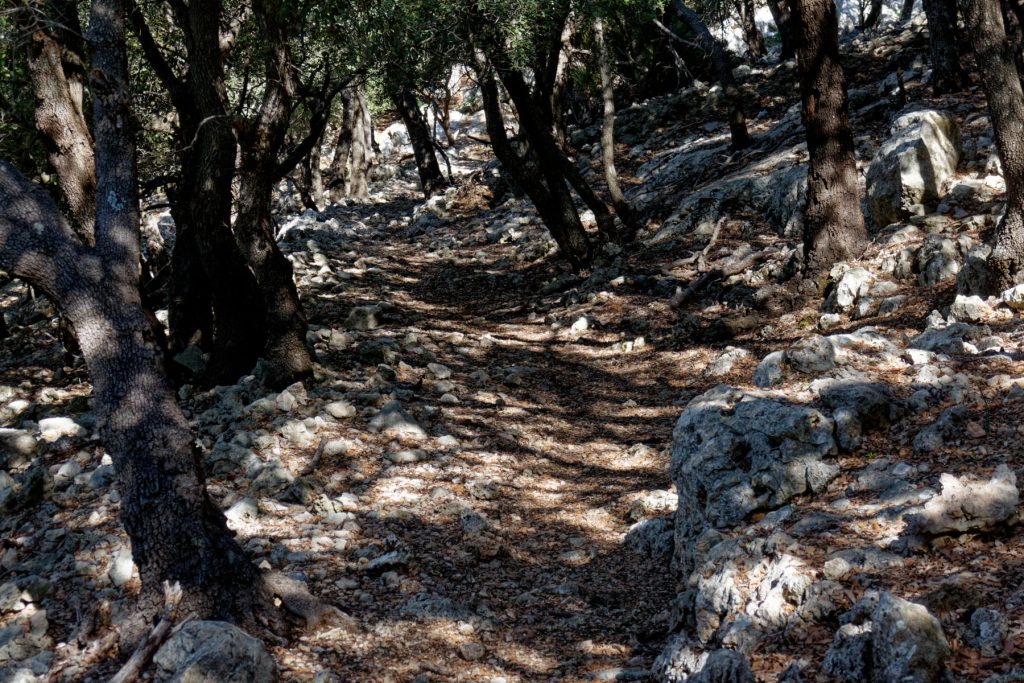 passing circles, some made of stones 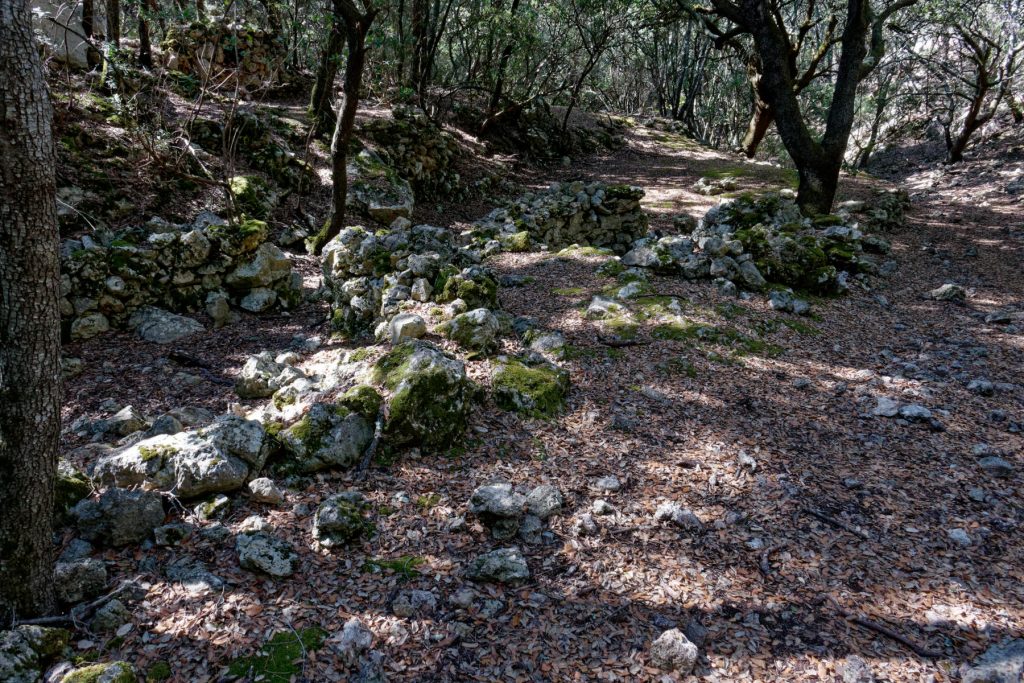 and some grassed over 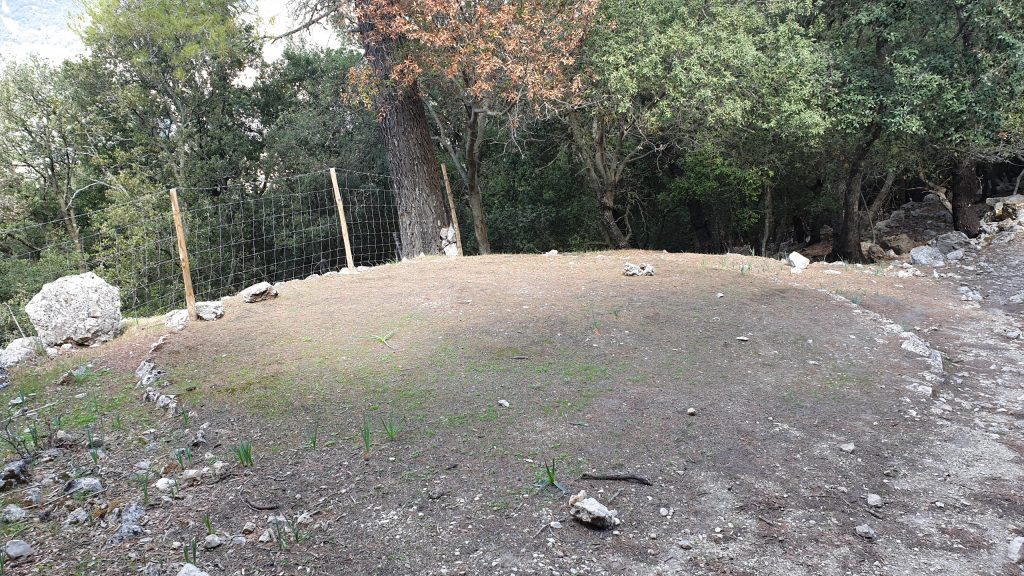 which we eventually realised must have once been pits where charcoal was created, called “Sitjas” locally.  We fairly soon reached a point with a lovely view back over the village and the valley. 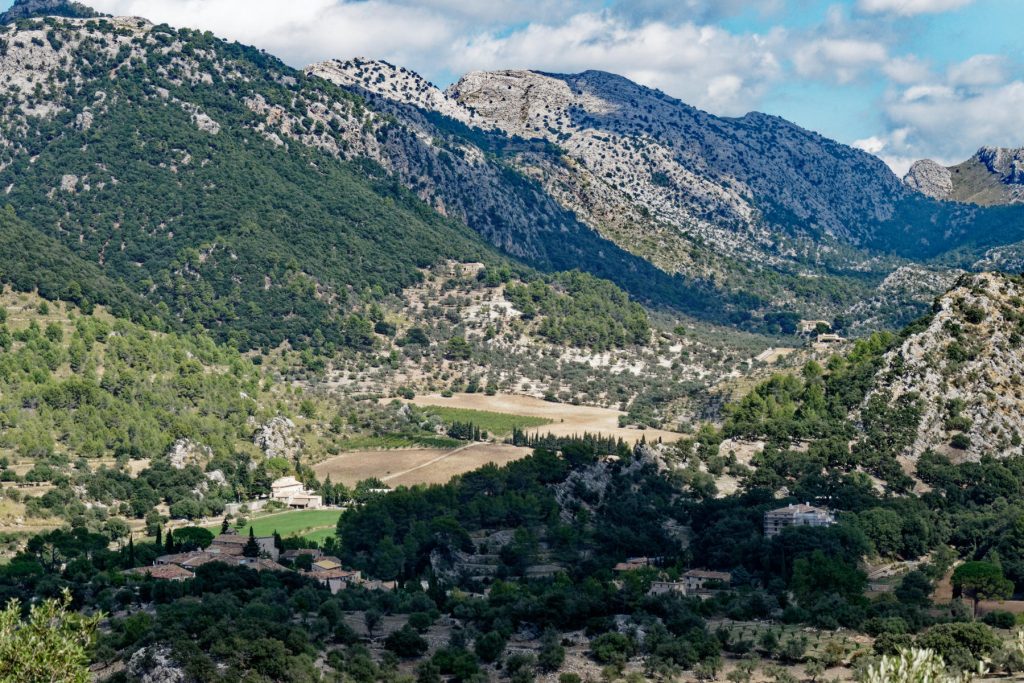 At this point, the Google Maps Bugger Factor kicked in.  Jane had read the booklet, consulted Google Maps and decided that our viewpoint was reached by carrying on, which involved crossing another interesting stile 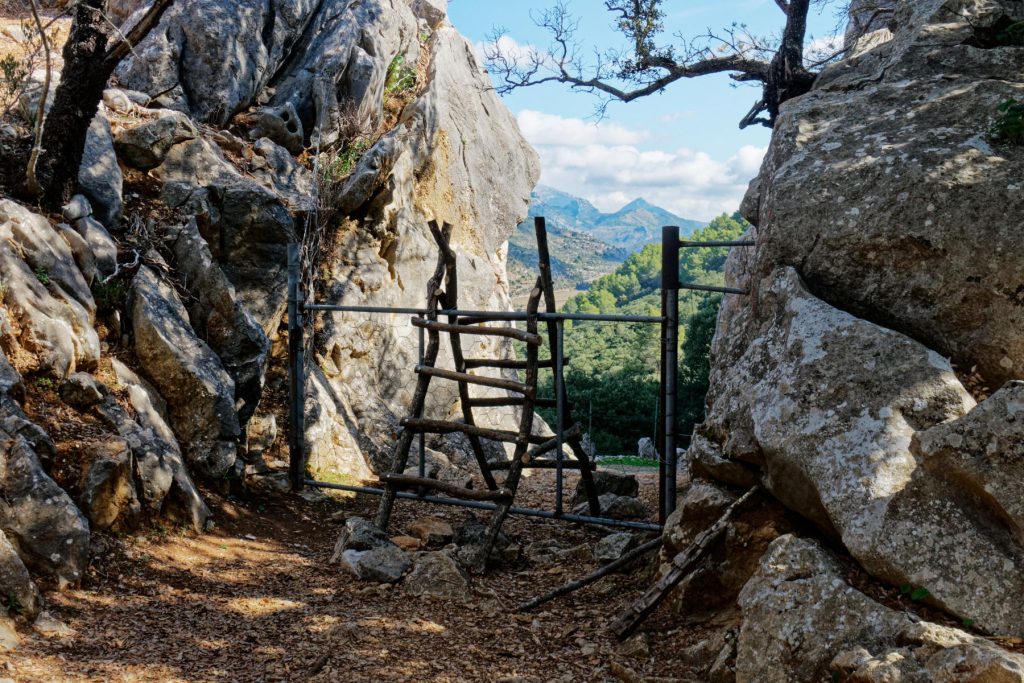 and then, much to my alarm, heading downhill (because this would inevitably lead to having to come back uphill on the return journey, and I’m not good at uphill).  On we carried, and you can see from this graph what happened next – we were at around 45 minutes so far: 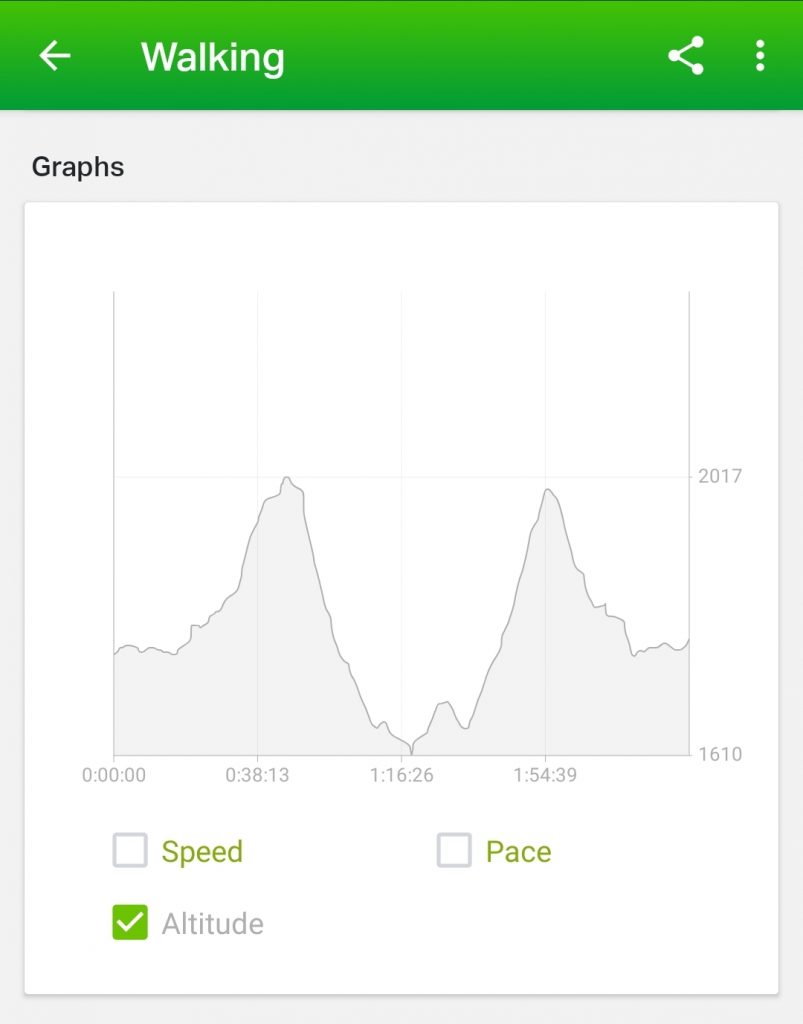 Yep – down we went, in relentless search for this benighted viewpoint that Jane sought using her phone. After a while, we reached somewhere where you could sort of see a view across the valley a bit if you used your imagination. We could hear voices in the (downhill) distance and Jane said that the viewpoint on Maps was probably over there and it was by a waterfall but only if it had rained recently. I therefore called a halt to the descent on the basis that (a) I wasn’t sure that the Maps place was what was described in the hotel booklet and, more to the point, (b) I was buggered if I was going to walk any more uphill than I had to.  So we respectively walked (Jane) and shuffled (me) back up to the second stile – with a small but pointless detour in search of the elusive viewpoint, and it was when we got back to the stile that we realised that this was the view mentioned in the booklet.

After a rest for half a banana each, we pottered back down the way we came up and got back to the hotel just in time for a Nice Lunch.  And now it’s 6pm, which means it’s time for a Nice Gin over which we can plan the morrow – possibly a visit to Valldemossa, as we both fancy a Chopin trip, and it’s not too far from there to Puerto Andratx, where there are some more opportunities for another Nice Lunch.  Tune in tomorrow to find out what happened, eh?