Friday 27 September. After yesterday’s sloth, we had resolved to be up betimes and hasten ourselves off to the bottom right bit of Mallorca in order to visit a major tourist attraction – the Caves of Drach – and its younger brother – the Caves of Hams. I suppose we were early in the sense that we hit the hotel breakfast buffet just before the halfway mark in its open window. We departed the hotel at about 1015, with the car’s satnav being a little equivocal about which way we should turn out of the (really very dangerous) hotel exit. After a certain amount of swearing and U-turning, we set off, only to find that the satnav lady was taking us the pretty way (referred to in the hotel guide booklet as being good for an excursion, but not as a regular route). It soon became a very tortuous road, as it became clear that we weren’t going through the middle of the two great slabs of mountain that stand out from the scenery, but over the top of one of them. 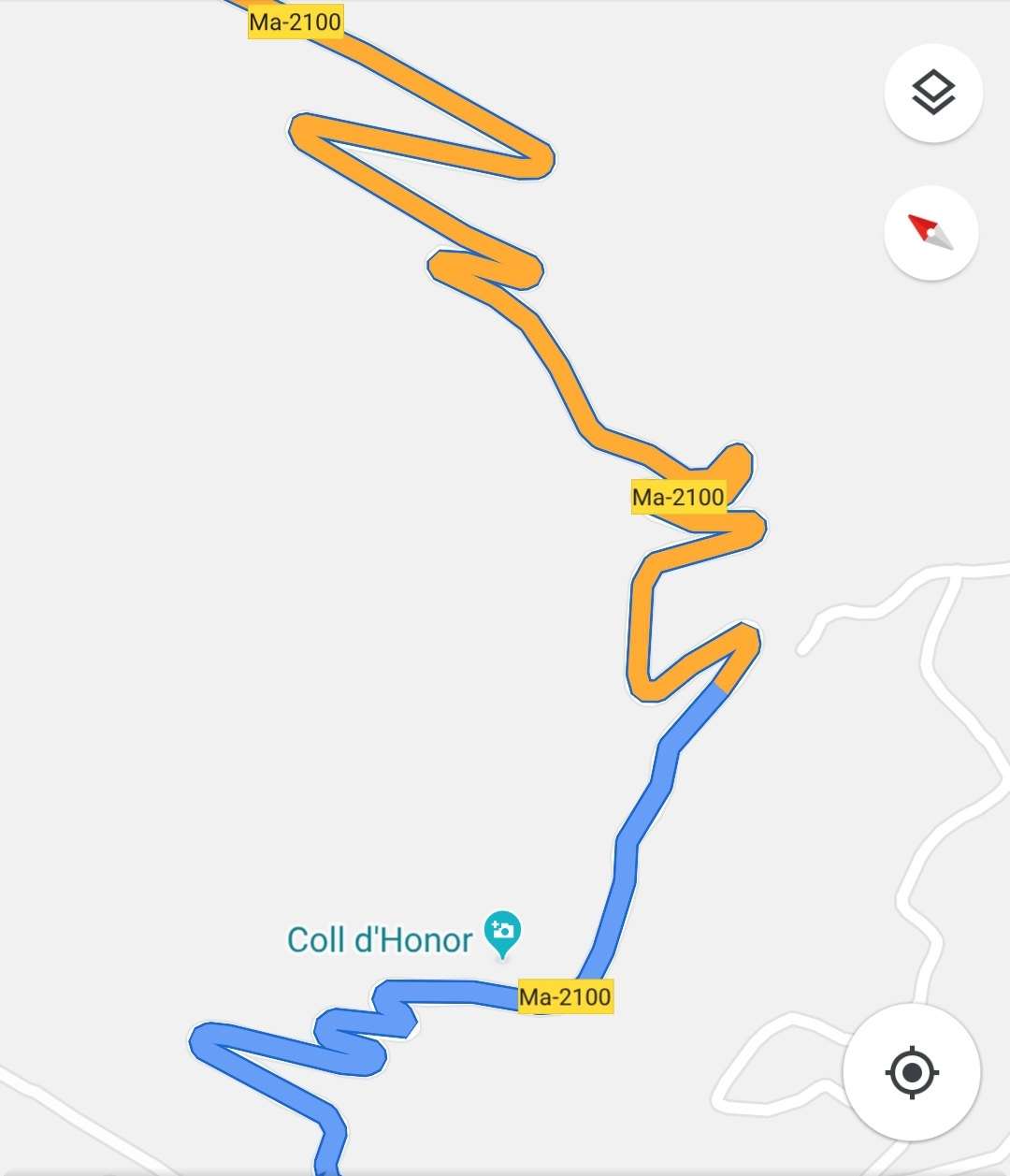 Fortunately, the road was quiet, with the main traffic being cyclists hurtling down the hill. We found that they bounced off the bonnet reasonably unobtrusively and hardly damaged the car at all.

No, of course we didn’t, really. We made it to Bunyola, the nearest large town (and scene of a remarkable pre-Christmas lunch over 30 years ago – catch me when I’ve had a few and I’ll tell you all about it – since when the village of Bunyola has become the town of Bunyola and has developed something of a traffic problem). Eventually the road became a perfectly normal road and an hour or so later we were at Porto Cristo, the home of both sets of caves, just in time for the 1200 entry to Cuevas del Drach.

Sadly, every other tourist on the island had had the same idea, and so the 1200 visit was full. We decided to go for a 1500 tour and then departed for the other caves, the Cuevas dels Hams, which was much quieter. OK, deserted. 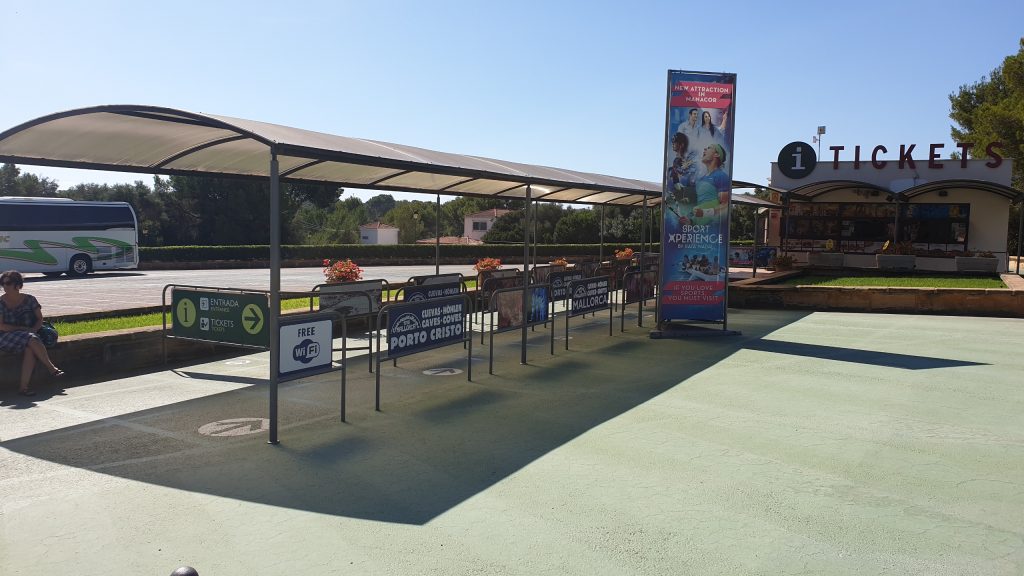 We bought tickets and the very helpful lady at the desk told us that the coffee was better in the coffee bar inside – inside the cave, that is. So off we went, and had coffee whilst waiting for the tour to start, serenaded by Mozart. I think every piece of music they played (see later) was by Mozart, so either they had a big thing for Wolfgang Amadeus or they assumed that the punters would at least not be offended by it. Actually, it was rather nice hearing Mozart’s 38th Symphony in a cavern whilst drinking coffee.

After we went in on the tour, the first thing that was promised was “The Blue Cave”. And it really was very, very blue. 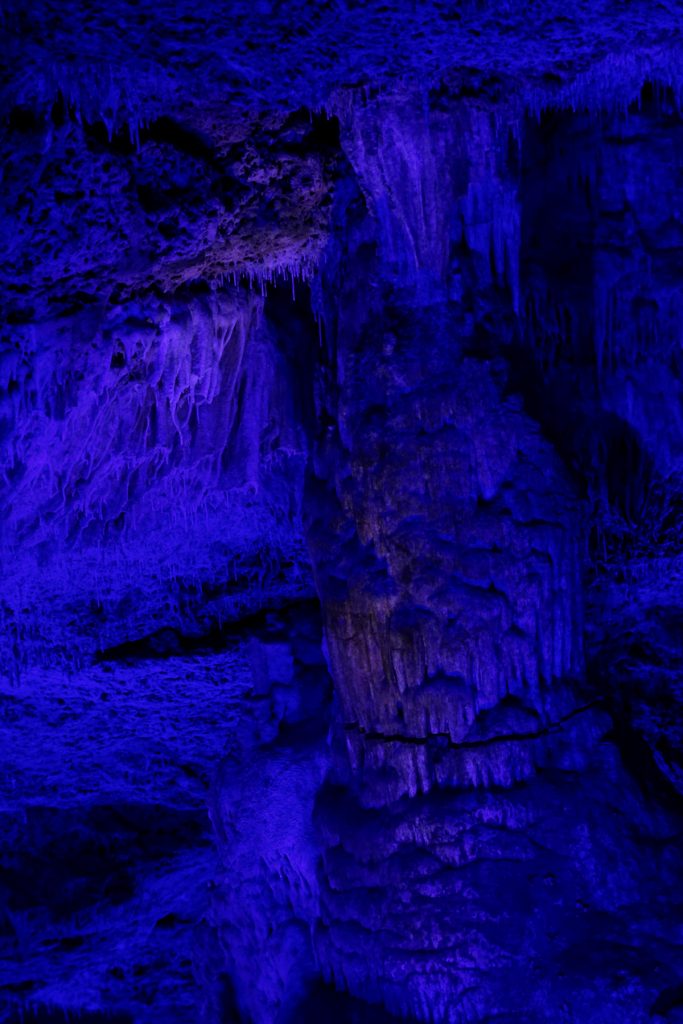 but that was because they’d used blue light to illuminate it. We trooped into a small theatre and were shown a short (but not really short enough) film, entitled “Genesis”, which went through all sorts of pretentious preliminaries before telling us about the discovery of the caves. Then we trooped through the caves themselves which were very colourful

but the colours were because of the artful placing of coloured lights, not really because of the formations themselves, even when the overhead commentary covered the topic.

The name of the caves themselves came from some mysterious formations, where stalactites went round corners and bent back upwards, like fishhooks – and “hams” is the Mallorcan for fish hooks. 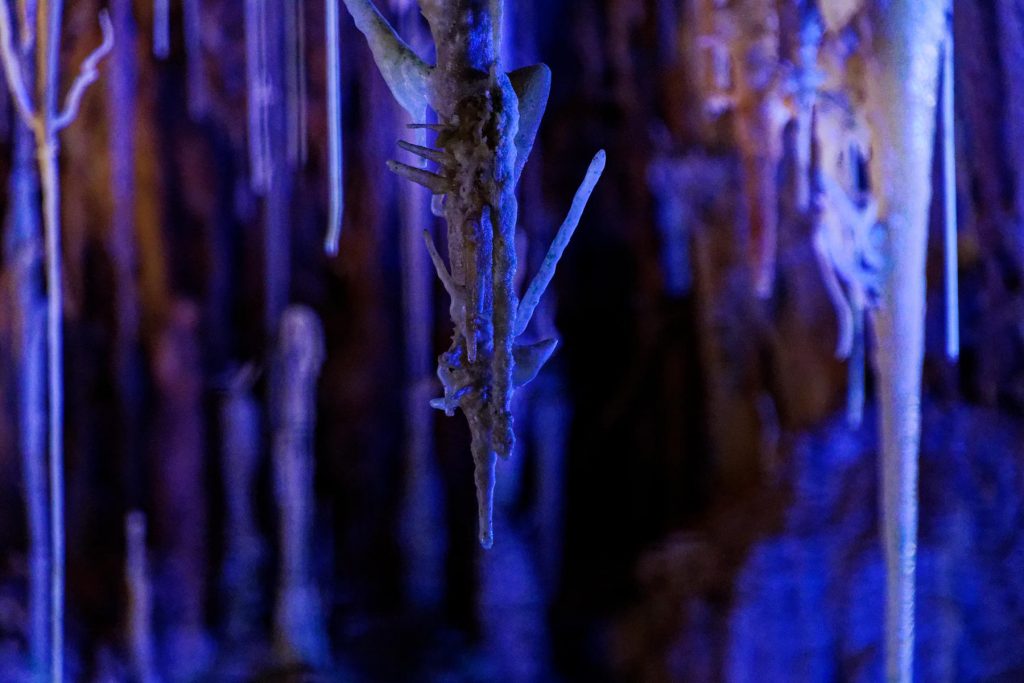 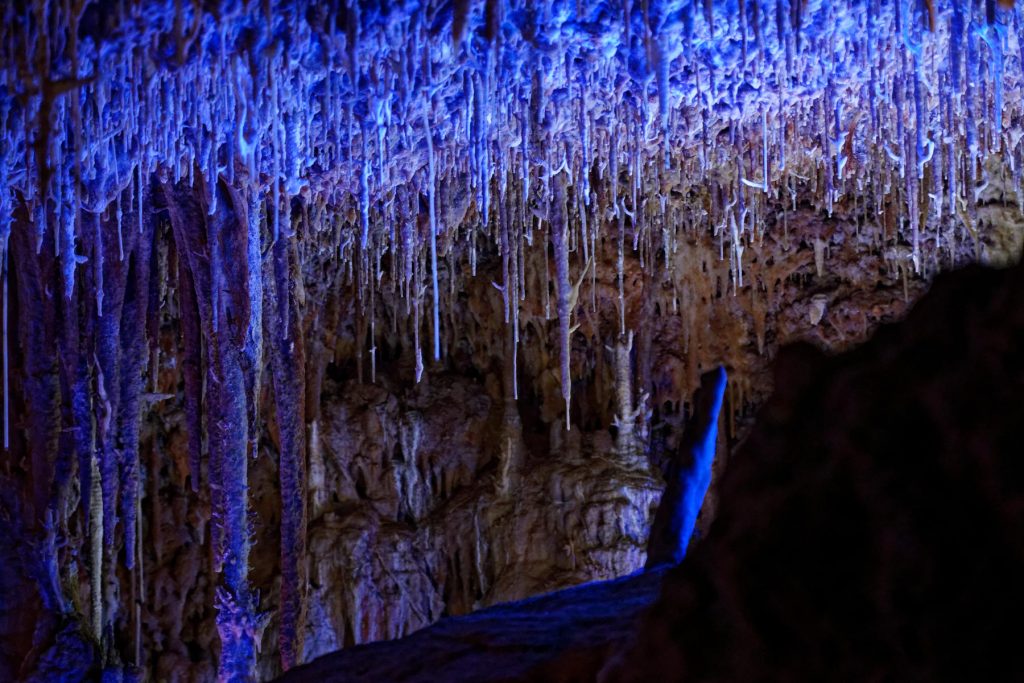 The final showpiece was a “concert”, in a cavern where the caves met the water at sea level (30 metres underground). More Mozart, you’ll notice, as an illuminated boat slowly swished around against a backdrop of projected video.

After an hour or so we emerged, blinking, back into the daylight, thinking that it was colourful enough, but that the overall presentation was a bit cheesy. A coffee break passed the time agreeably until we should go back to the Drach caves, which were somewhat more popular.

Drach is an altogether better experience – bigger, less cheesy and more impressive even though less colourful. Jane and I had been here before whenever it was that we last visited Mallorca, a date lost in the mists of time. I don’t have any photos of the Drach caves from that visit and we bought a calendar at the obligatory retail opportunity back then, which makes me believe that they didn’t permit photography in the caves then. Today is, unsurprisingly, very different, and photography is allowed, without flash (although there were many instances of people using flash, presumably because either they didn’t know how to turn the flash off, or, more likely, hadn’t spotted that their flash was operating). And I’m glad it is, because it’s very beautiful and very impressive – the Drach organisers let the formations speak for themselves much more than the Hams people do.

One processes through a predetermined route, with lots of photo opportunities. There’s one point where the path widens sufficiently that people can – phew! what a relief for them! take photos of themselves in front of the formations

and the end point is (also) a concert in a, erm, cavernous arena, where there’s a lake big enough to support a boat with a quartet of musicians on board – two violins, ‘cello and harmonium. One is not permitted to photograph or video this and I was astounded that not one person attempted to use their phone or camera during the 10 minutes of the concert (except me, and that was a misunderstanding of whether it had ended). The music was pure cheese – Pachelbel’s Canon, Elgar’s Salut D’Amour, that kind of thing – ending, perhaps inevitably, with the Barcarole from Cavalleria Rusticana.

Cheese aside, there is merit in both of these tourist places – Drach is more impressive and better organised, but it’s possibly worth booking your time slot in advance, if you can be that well organised, just like we weren’t. Anyway, I’m glad we did both, and it was a nice opportunity to walk down into Porto Cristo afterwards to see what opportunities there were for “lunch” (it being 4pm by this stage). It looked, it has to be said, promising. 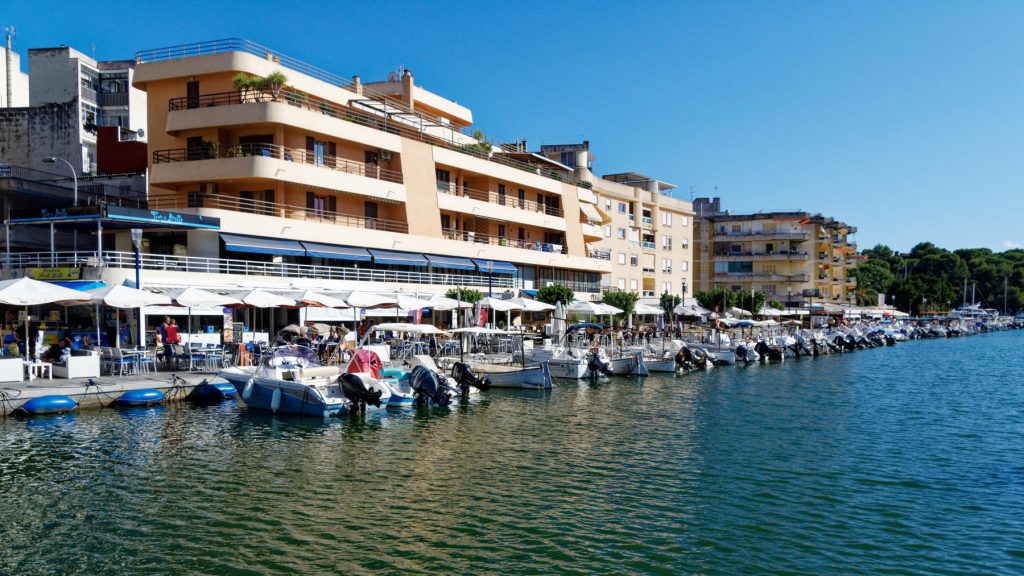 We settled on a restaurant called Cap D’Es Toi, and had a very satisfactory meal there. Now, look: I don’t approve of posting photos of food, but I have to make an exception for the “Filet of St. Peter Fish with Fried Onions”. There really was fish under there, honest! 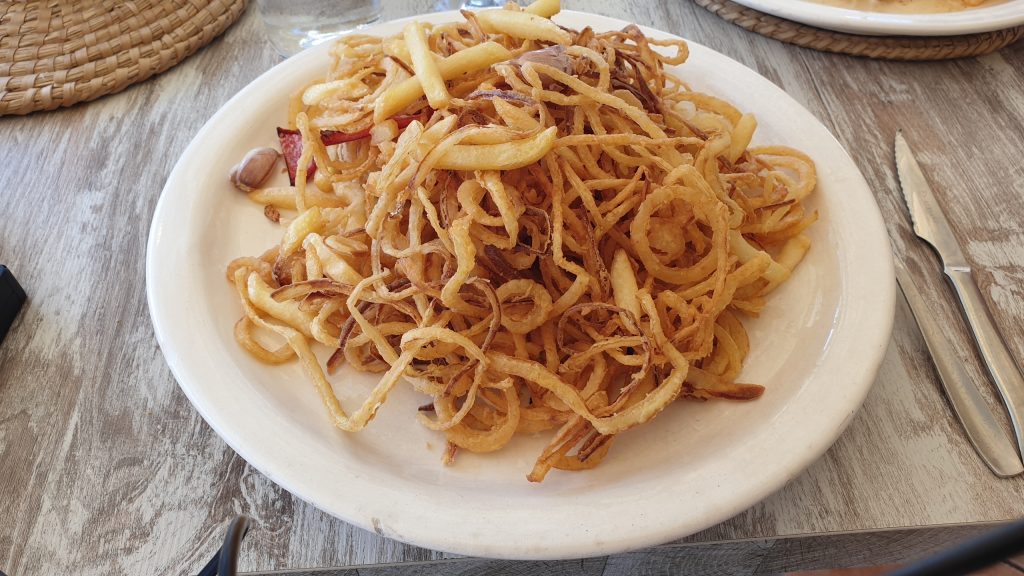 and I manfully stepped up to the challenge of finishing and probably irredeemably damaging my health. But It was delicious! (I should add that I felt a bit queasy during the night, but serve me right, I suppose) 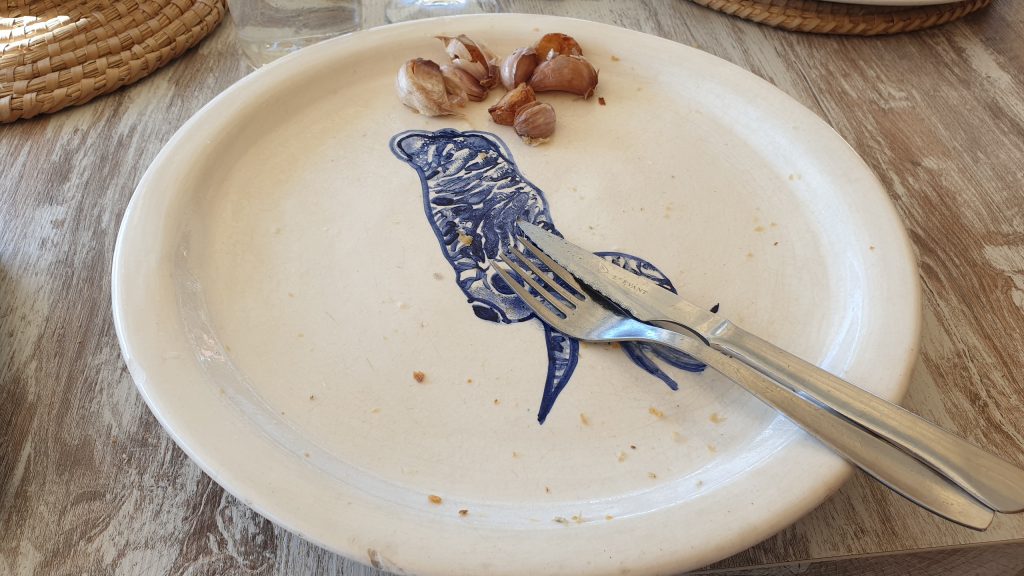 After that, there was nothing for it but to walk back up to the car and head back to the hotel, via, it has to be said, a less torturously twisty route. Having arrived here, all that was needed was to process several hundred photos and write this blog post, which I hope you’ve enjoyed reading.

Tomorrow might see us going for a hike around the local hills. But you’ll have to read on to find out if that happened, won’t you?

3 thoughts on “Cave at Emptor”