Still Monday September 23. And there was me, thinking we came on holiday for a bit of break! Here’s today’s walking – some 10 miles around Barcelona. 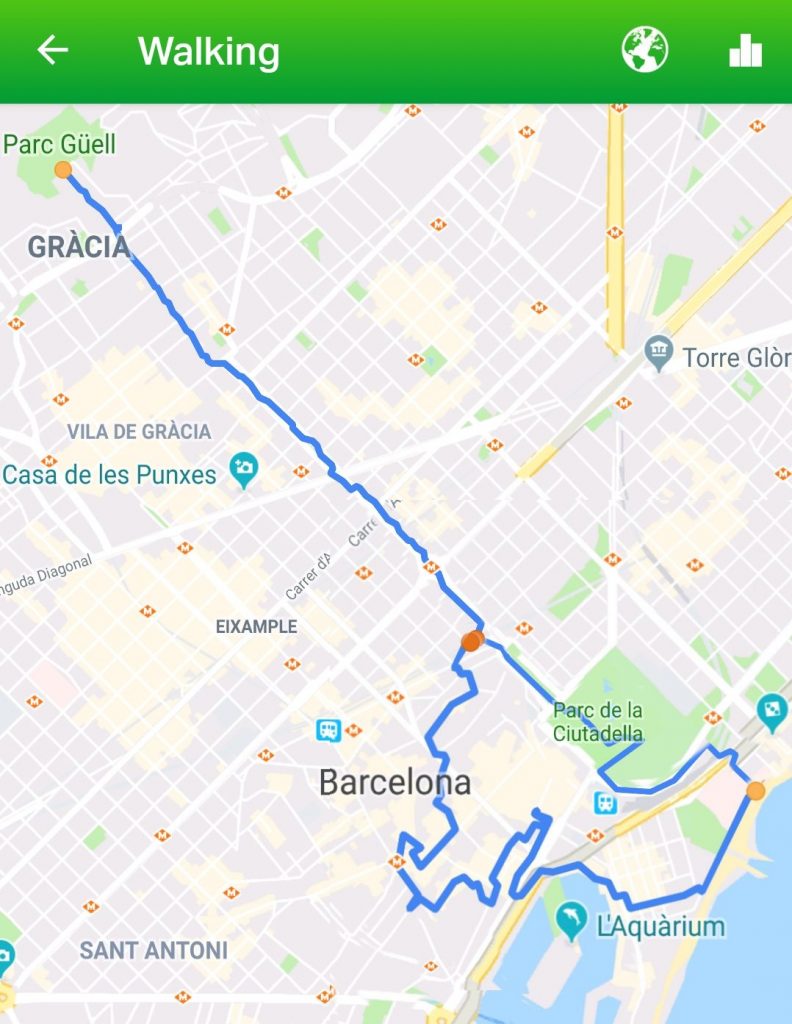 You can see the morning’s walk from Parc Güell to the hotel. In the afternoon we wandered down to the “Twin Towers” near the Oympic Port, specifically to a restaurant called “Agua”, by the beach, for lunch with an ex-colleague of mine. On the way down, we collected a few more of the sights of Barcelona, from the quirky, 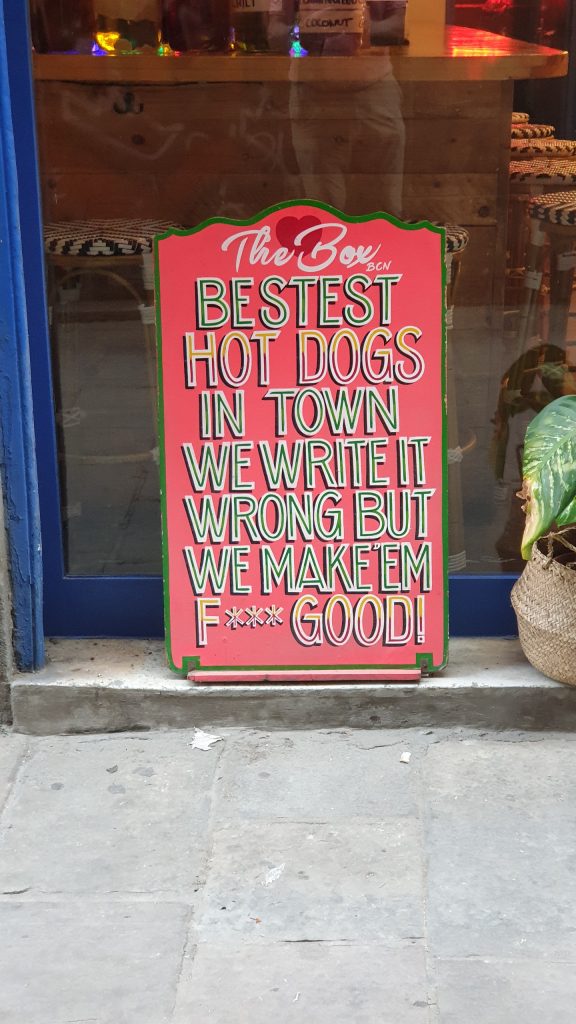 and the graffiti-ridden (honestly, if it doesn’t move in Barcelona, it gets scrawled on!), 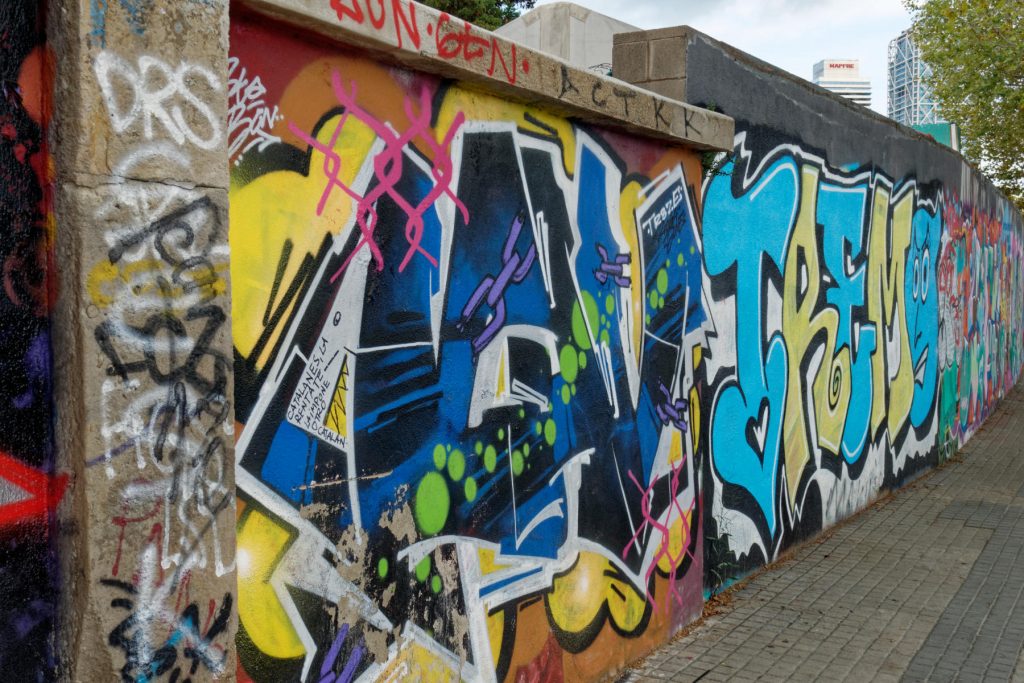 to the architectural. The Arc de Triomf features some interesting, and presumably antipodean, bats among its intricate brickwork, 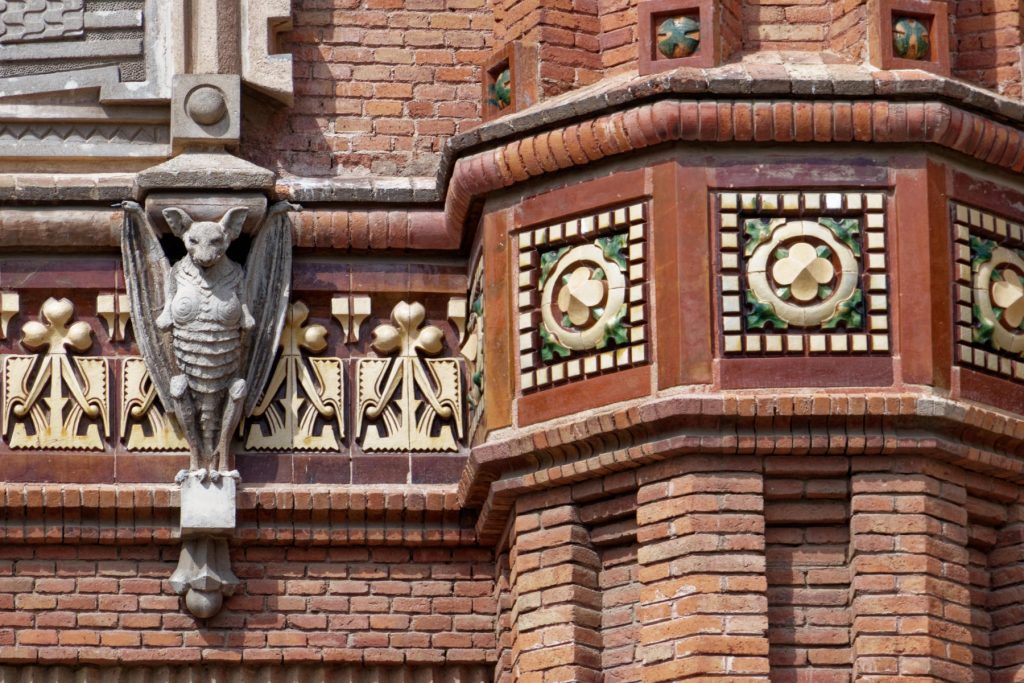 and the streetlights in the park just behind it are things of art nouveau joy. 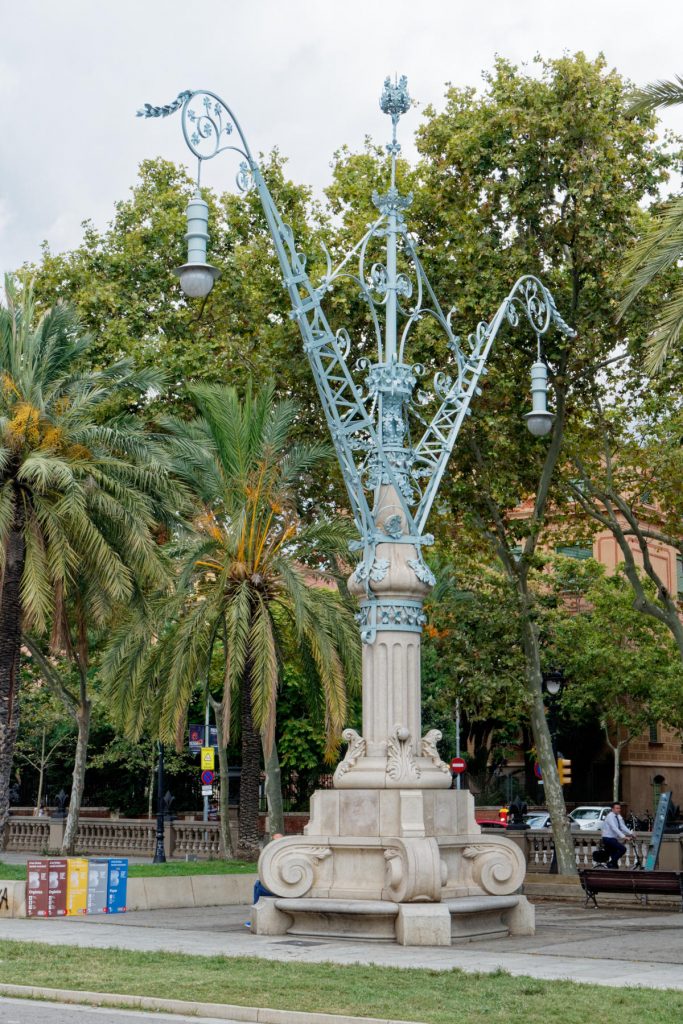 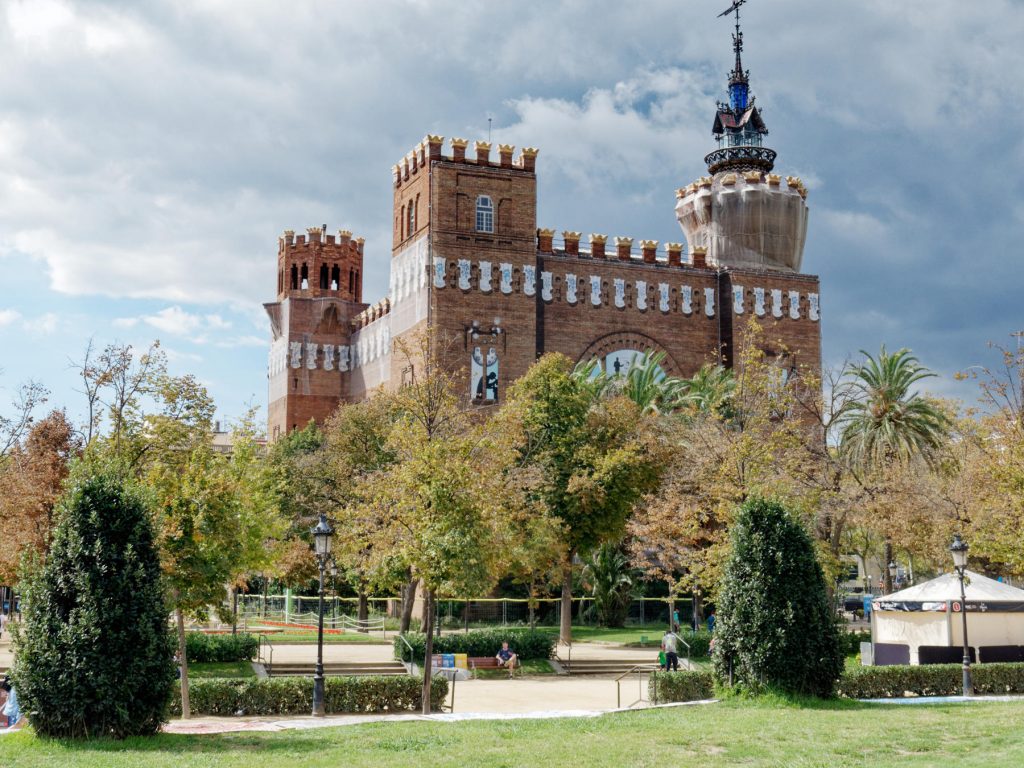 the Parish Church for Ciutadella with its lovely, if somewhat faded, roofing, 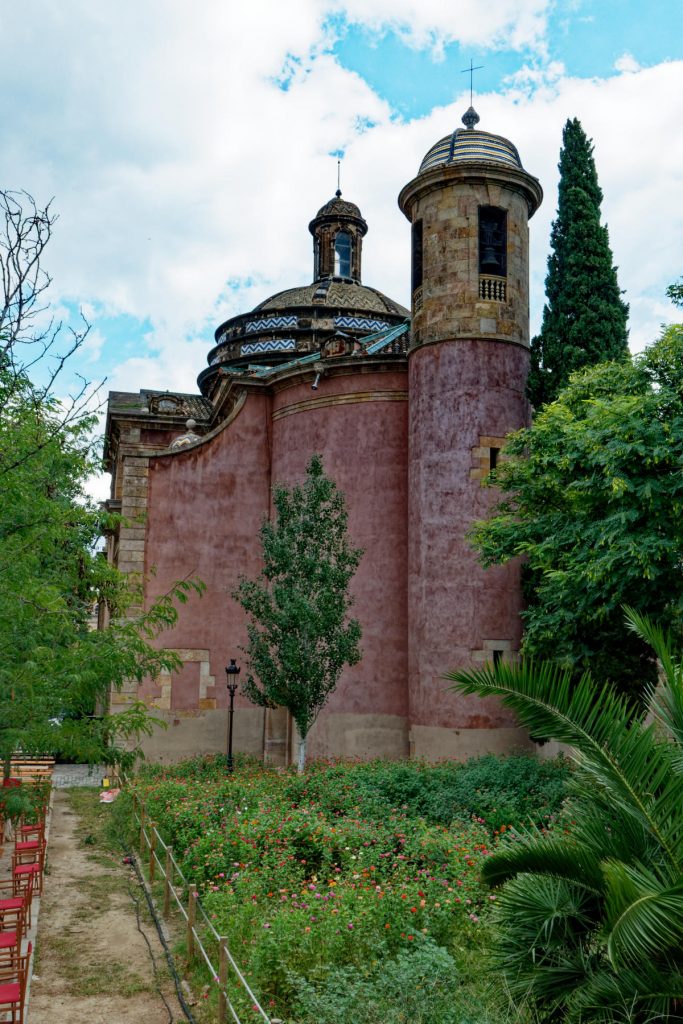 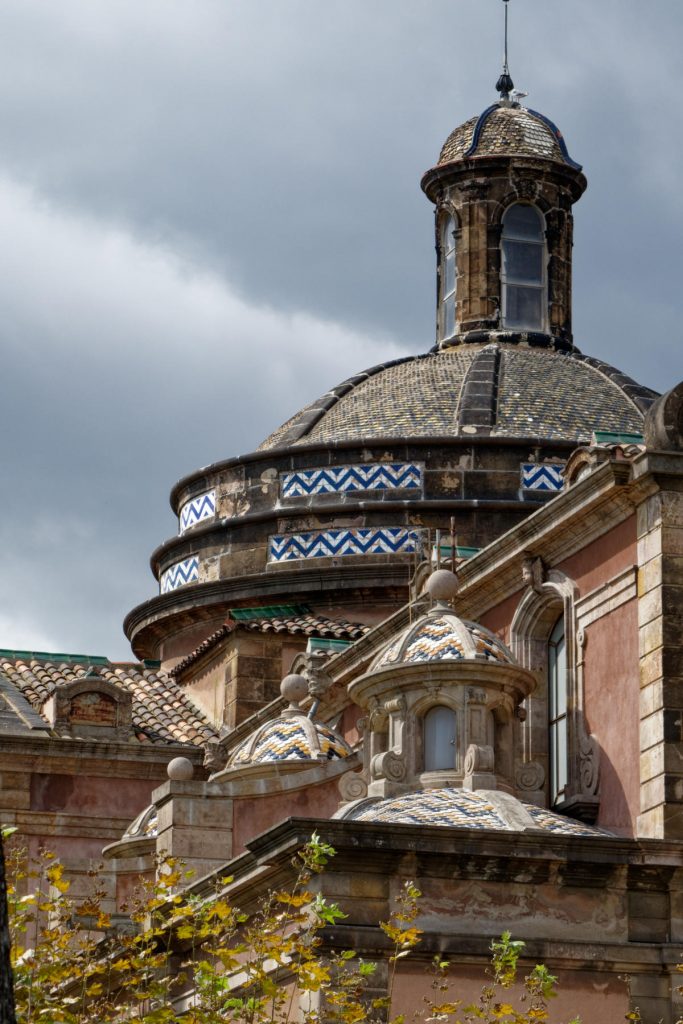 and the Catalunyan government building. 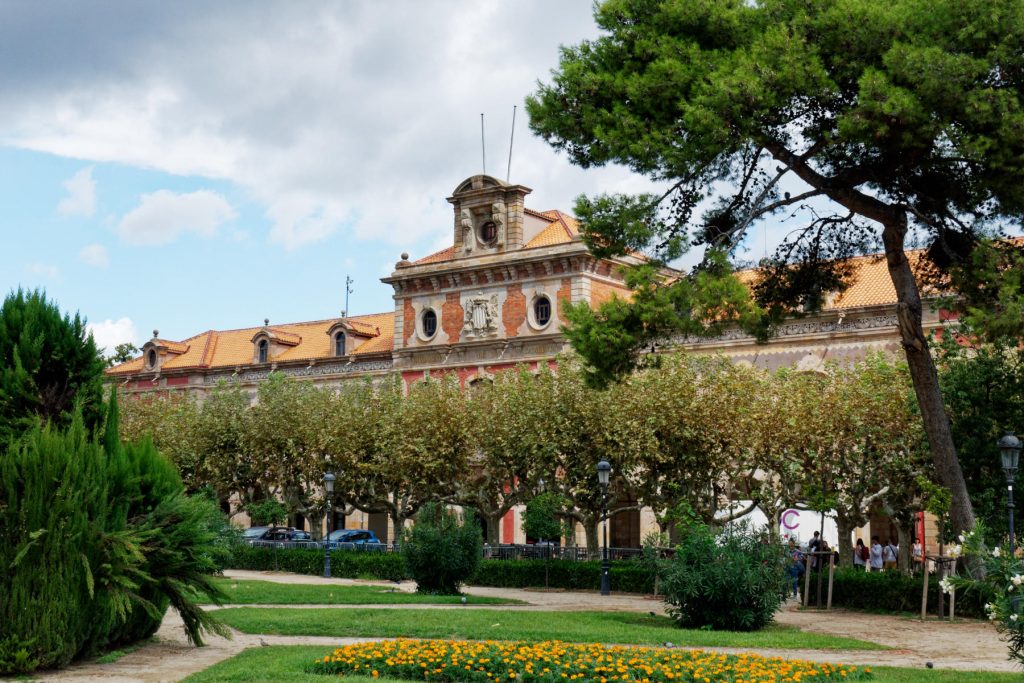 Also, in the distance, we saw the top of the Torre de les Aigües, originally conceived as a water tower, but now a tourist attraction with a viewpoint at the top. 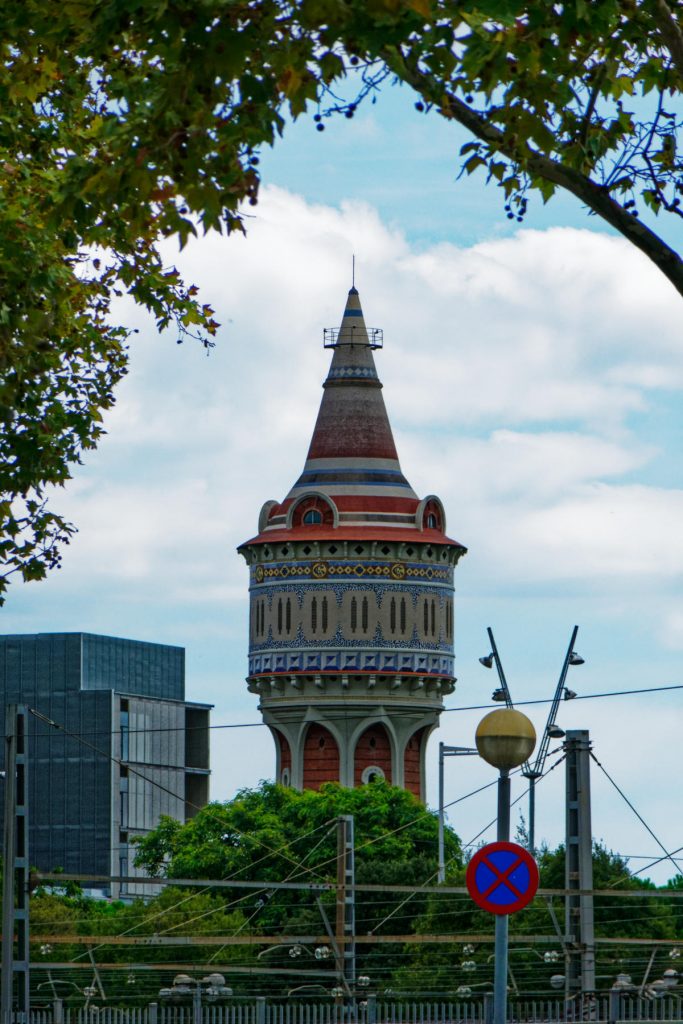 After (a very pleasant and enjoyable) lunch, we decided to wander back to the hotel via Barceloneta and El Born, based on recommendations from friends. That is the third, somewhat wiggly, trail on the walking map above.

We started on the prom just by the restaurant, which has a very nice vibe, although you have to be a little bit careful to avoid the people whizzing by on electric scooters. 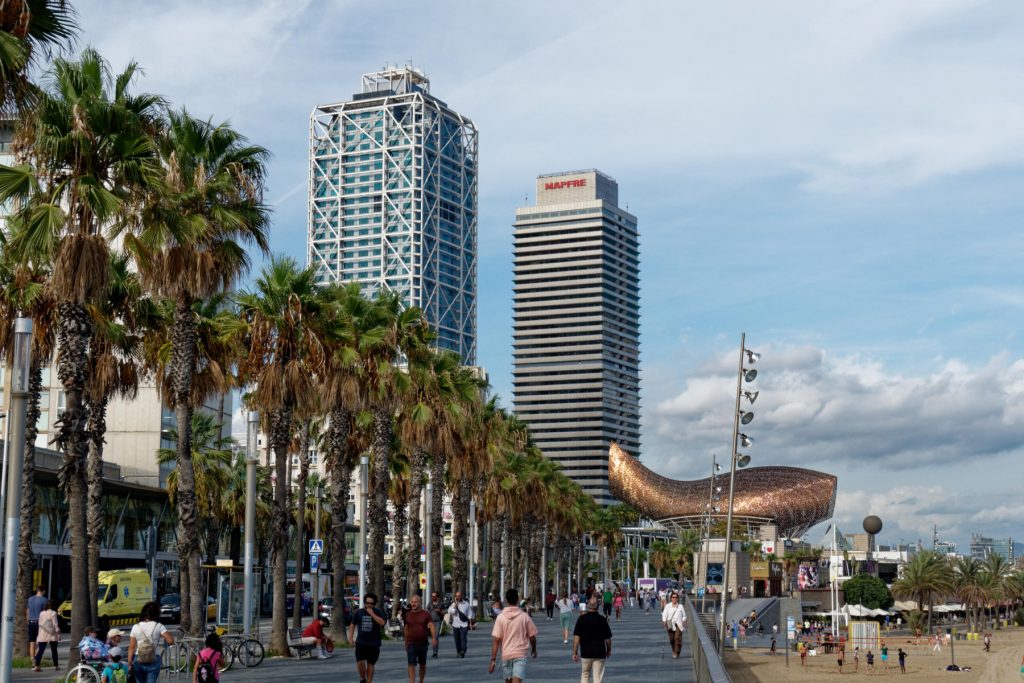 Then we dived off into Barceloneta, a neighborhood constructed during the 18th century for the residents of the Ribera neighborhood who had been displaced by the construction of the Ciutadella of Barcelona. It was evident that Monday, to quote the song, is washing day 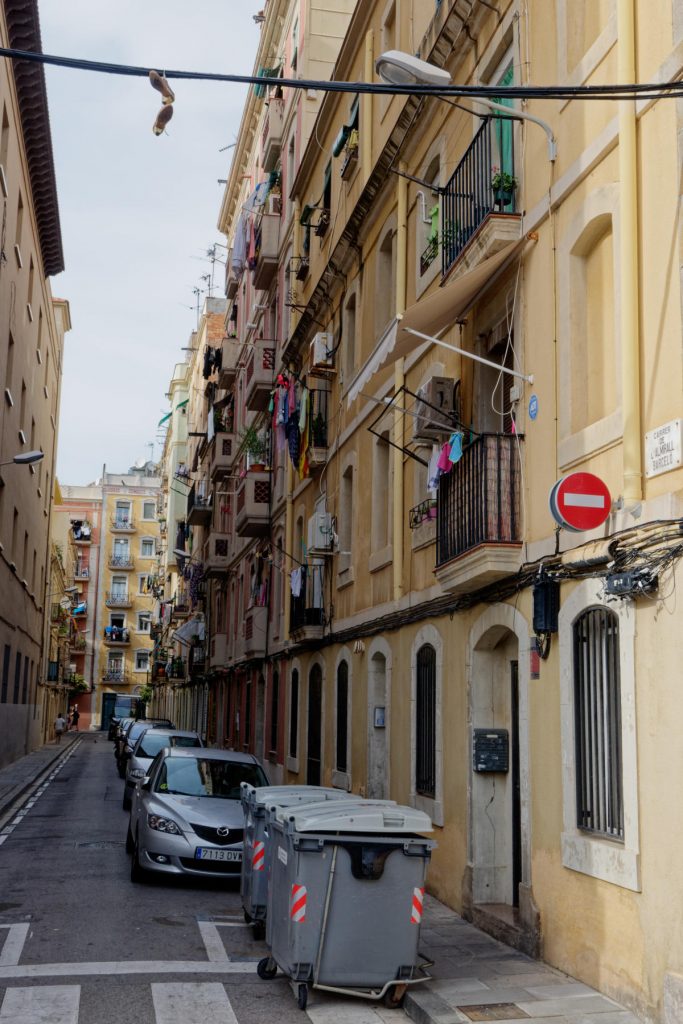 but the song can’t explain the shoes on the wiring! It’s a neighbourhood of mainly narrow streets, with the odd occasional broader thoroughfare. 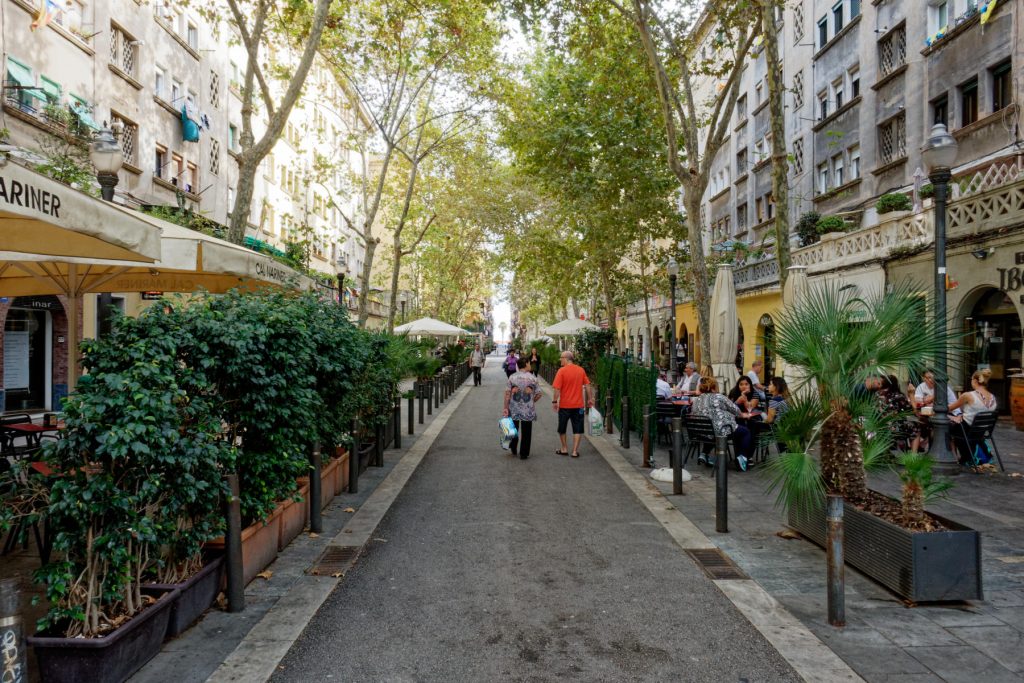 Adjoining it is El Born, which has risen above its humble beginnings as a settlement built on top of a medieval area of jousts and celebrations and has grown into being one of the most fashionable places in the city. Traces of its jousting history can be seen in signs on the side of buildings pointing horse riders to the way in and the way out through the city walls, which were an extension of the original Barcelona city walls. 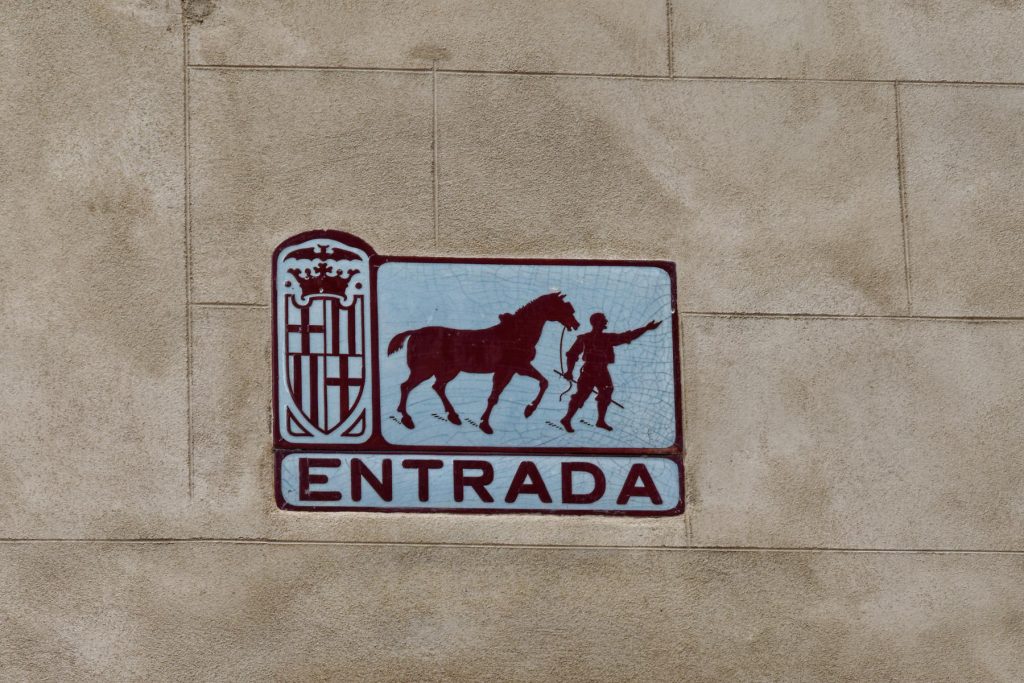 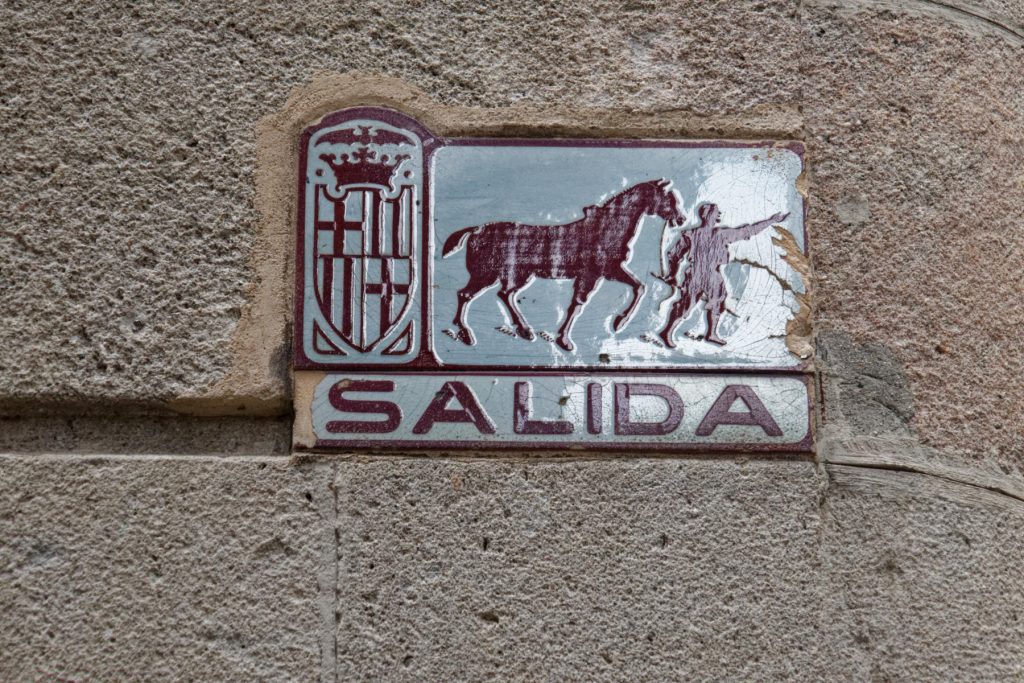 It’s a rabbit’s warren of narrow streets with many small business properties crowding in. 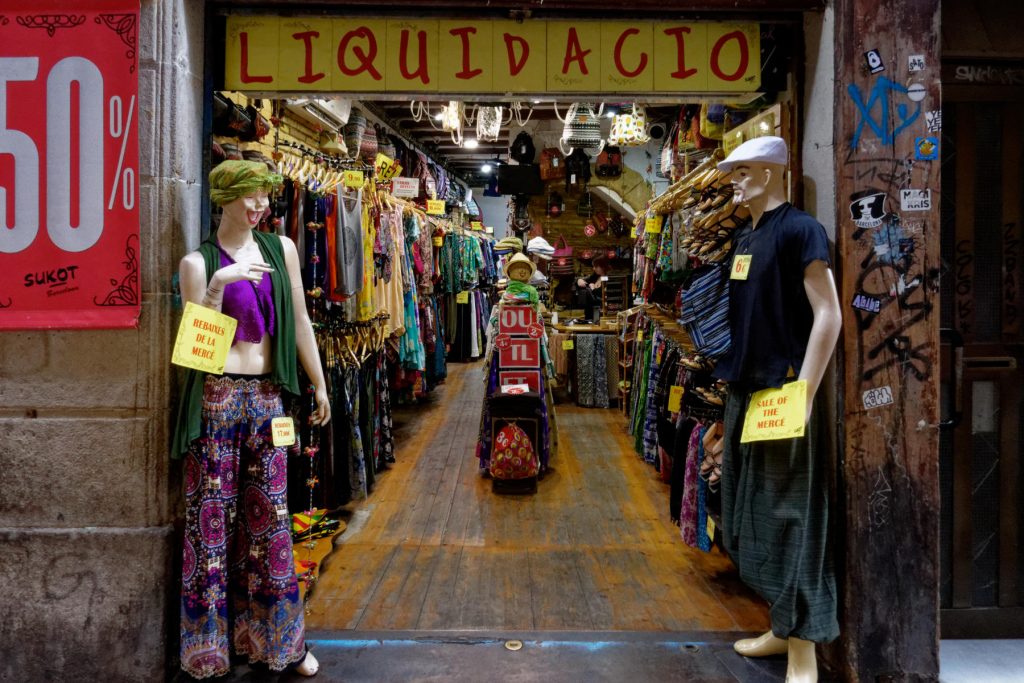 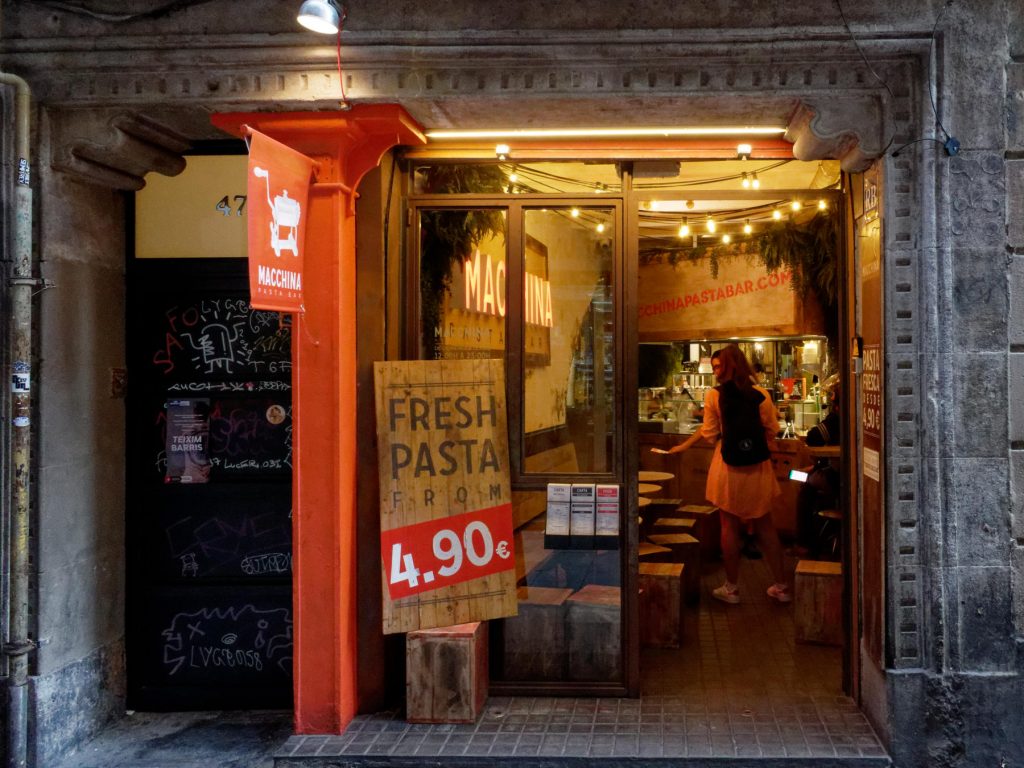 En route, we stopped in at the church of Santa Maria del Mar, an imposing church in the Ribera district of Barcelona built between 1329 and 1383 at the height of Principality of Catalonia’s maritime and mercantile preeminence. It has a very lofty interior and a sense of grandeur inside. 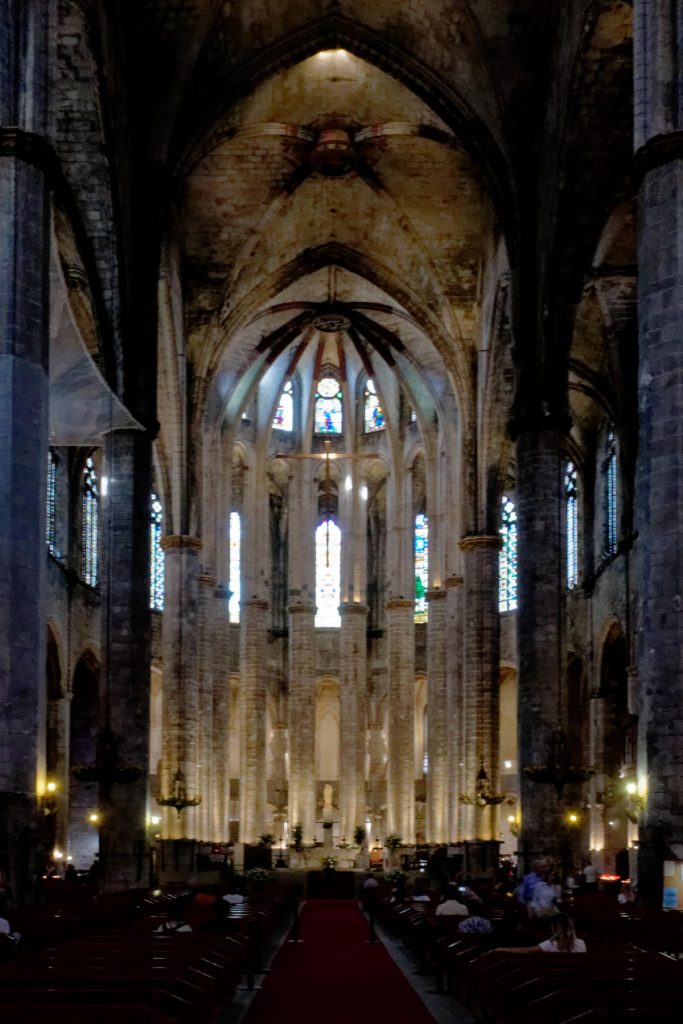 We also stopped off to look inside the Basilica de la Mercè, which somehow lacked the gravitas of the Maria del Mar. It’s an imposing building, though, with a huge statue of La Mercè on top. 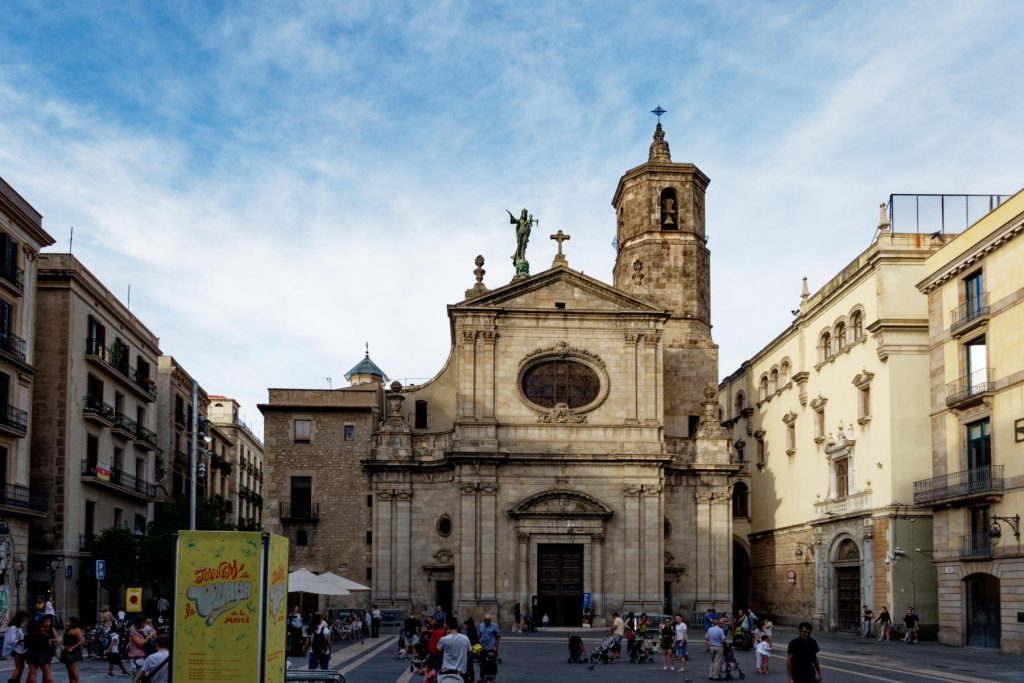 (the picture doesn’t do the statue justice – its true scale can be seen better from the marina area, frankly).

We rounded the walk off by passing the Palau Güell, an example of early Gaudi architecture. It was closed, but I took a couple of pictures, including one of its rather impressive entrance gates.

It being 7pm by this stage, we wandered back to the hotel through the crowded streets. 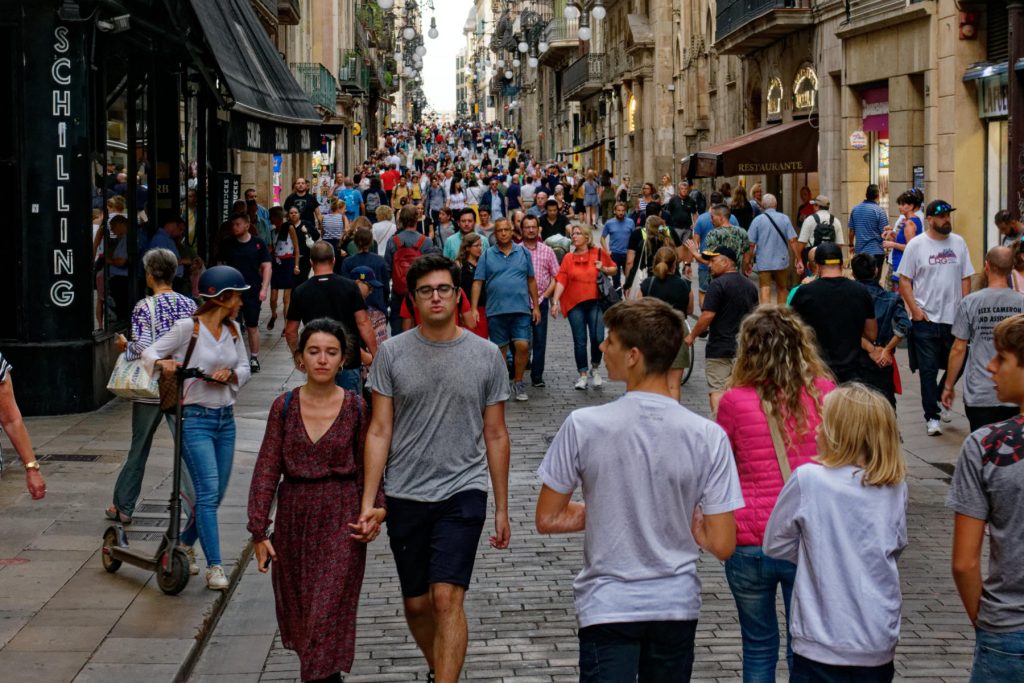 Tomorrow is our last full day in Barcelona. We plan to visit Sagrada Familia and, if possible, to get into the Palace of Music that so struck us yesterday. I will report back to you on our exploits.