First, a word about the weather. We were based very near Puerto Natales, a small town which is about as far south of the equator as my home town in Surrey is north of it. However, there’s no gulf stream to temper the weather, so it’s pretty extreme, with temperatures varying from -15°C in Winter through to over 20°C in Summer, and strong winds driving very changeable conditions. By the end of the day, I have to say I was pretty pissed off with the ceaseless gale-force winds. But they did mean that the grey, misty, wet weather, such as we saw at the start of the day 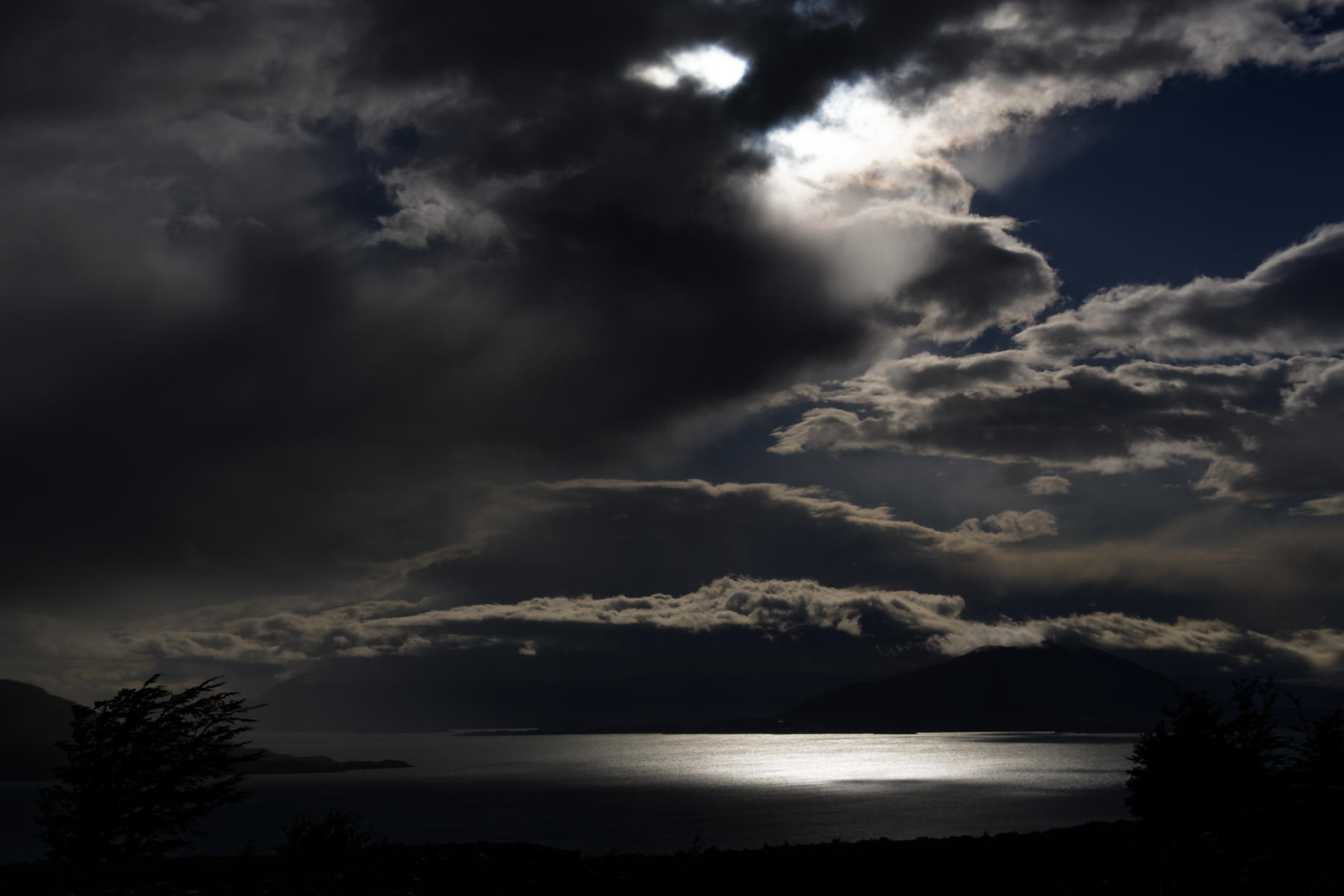 was eventually blown away and replaced by sunnier and less rainy conditions. But the wind didn’t let up for an instant.

Puerto Natales is a great place to use as a base for exploring a major tourist attraction, but also a significant conservation effort – the Torres del Paine National Park, a “paradise of 227,298 hectares and exceptional geography of imposing massifs, virgin forests and turquoise lakes.”

At this point, I think a word is in order about the roads. I would rate driving in the national park as something best left to experts, as the roads don’t have a tarmac surface – they are rough, rutted and pot-holed. Apart from possibily damaging tyres and/or suspension by driving yourself around, you’ll end up having to wipe the windows clean very frequently to get the mud off them.

“Torres” means towers, and Paine is the name of the principal river that is fed by the run off from the snow and ice that is a permanent feature of the towering rocks. “Paine”, by the way, is an aboriginal word meaning “blue”, and you’ll see how appropriate that is later on in this post.

However, this central massif is not the only attraction of the area. En route to the southern park entrance (yes, you have to pay to get in), you can visit the Mylodon Cave, a “natural monument” which is geologically very interesting, spanning 20,000 years of eolution of rock formations and native animals.

The animal that the caves are named after is, you guessed it, the Mylodon, a species of giant, ground-based sloth which went extinct some 5,000 years ago. At a viewpoint in the cave, the organisers obligingly have placed a life-sized model: 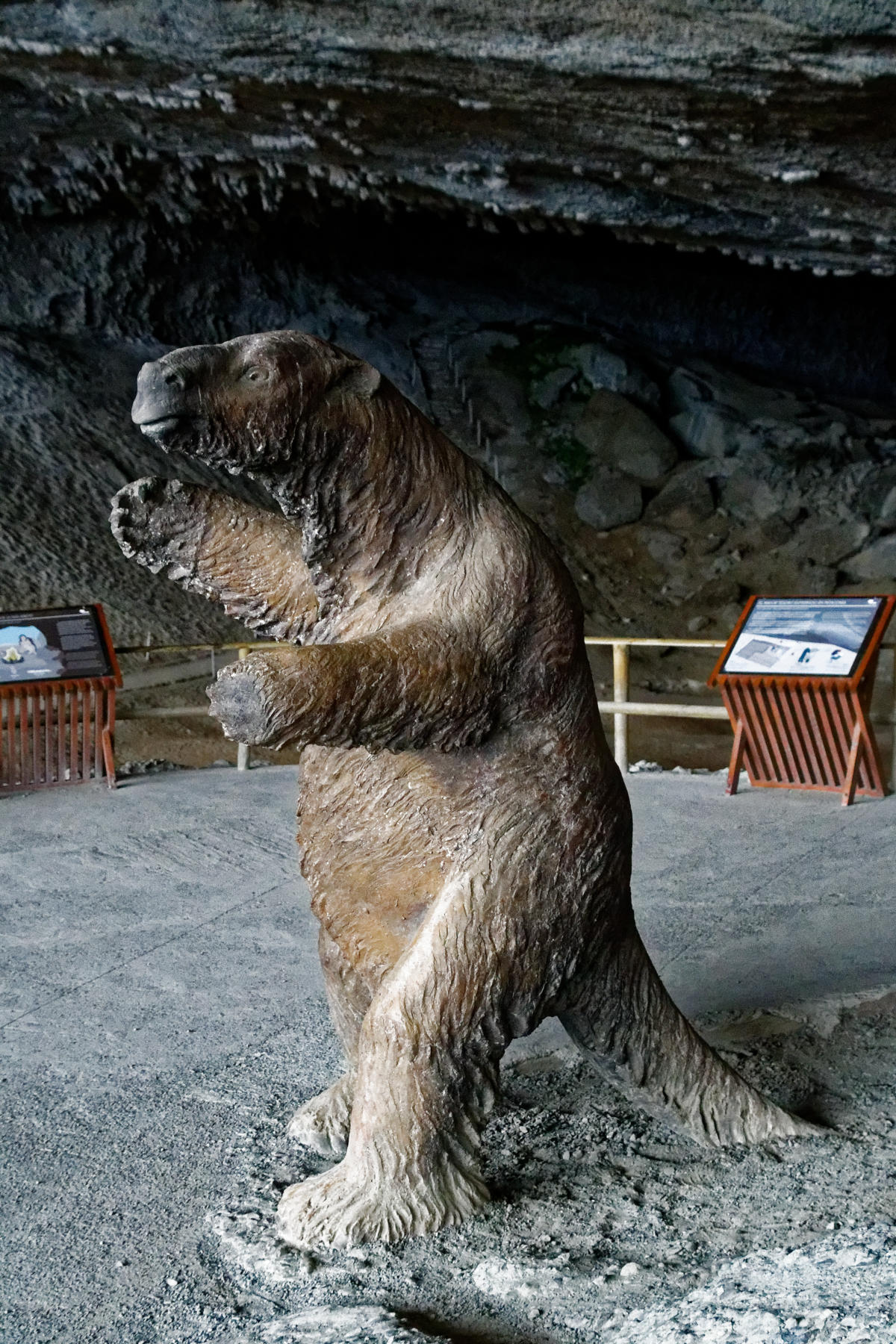 The cave is a substantial hole gouged out by glacial and water activity. 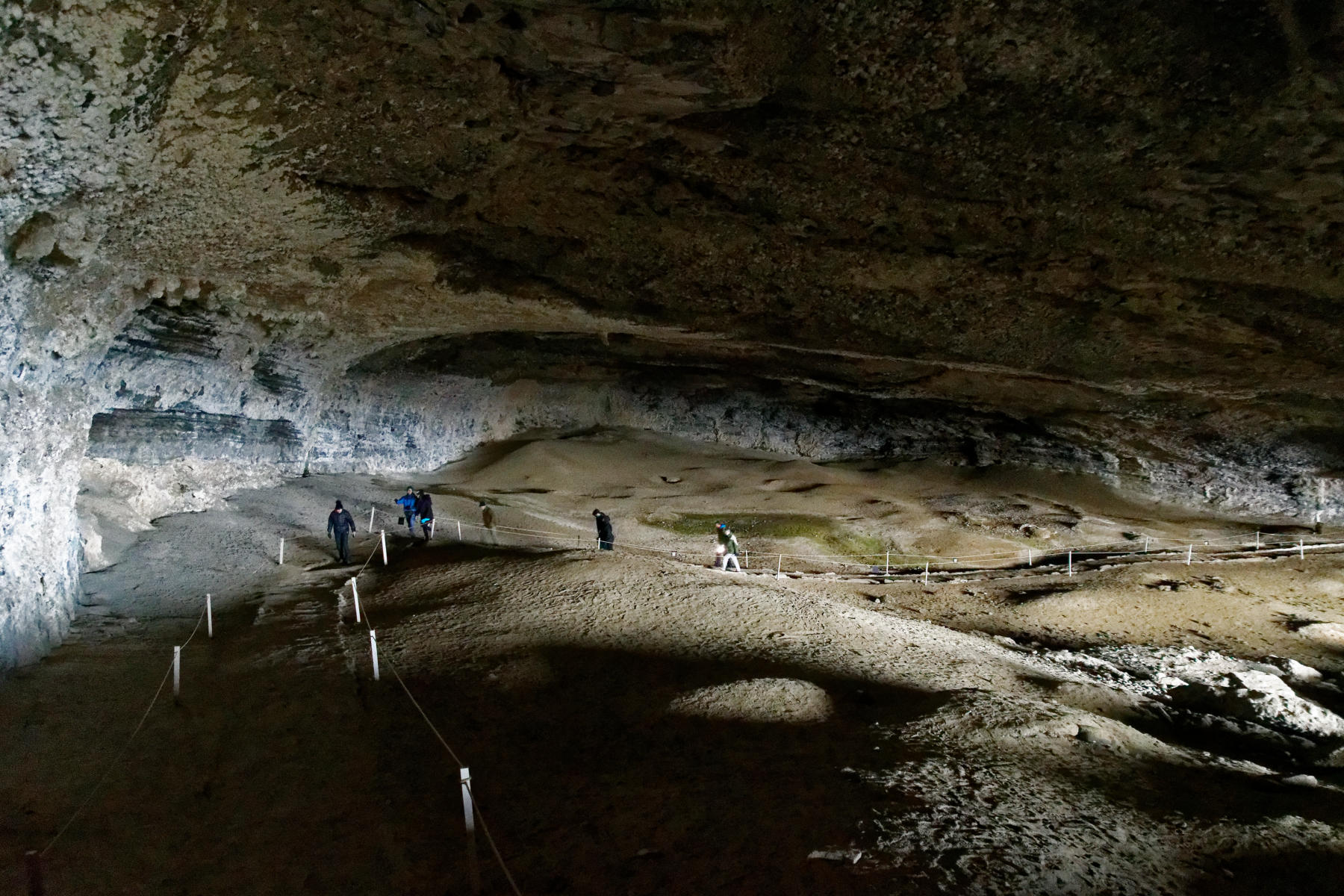 Once having entered the Park, our next stop was the Grey Lake (so-called because of the colour of the sediment it carries), which debouches from the Grey Glacier.

The first hurdle on the walk to the shore of the lake is a suspension bridge, which is quite fun, albeit slightly alarming, to cross.

And then it’s a short walk to the shore of the lake. We were in luck, as near the shore there was an actual, real and beautifully blue iceberg which had broken off from the glacier. 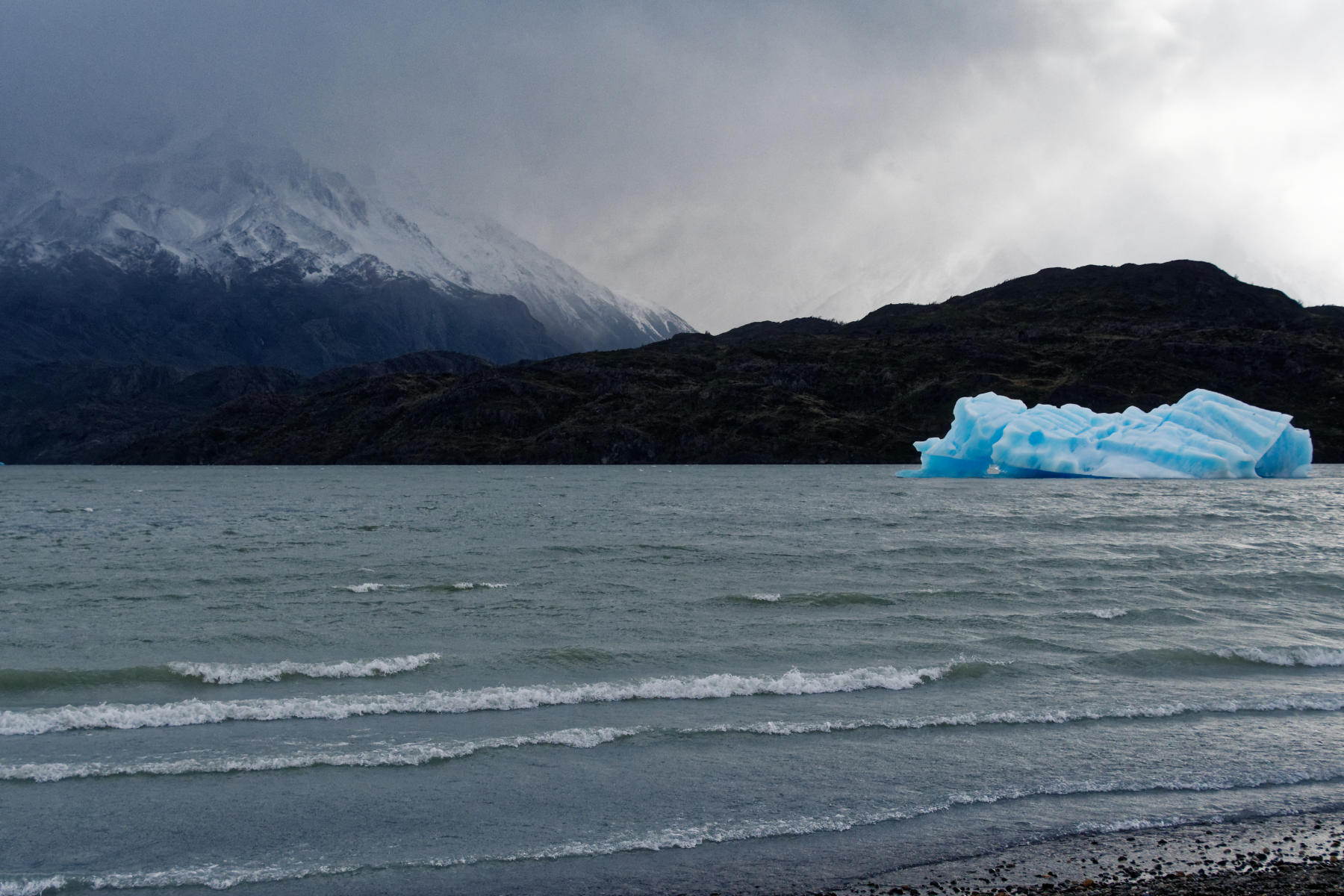 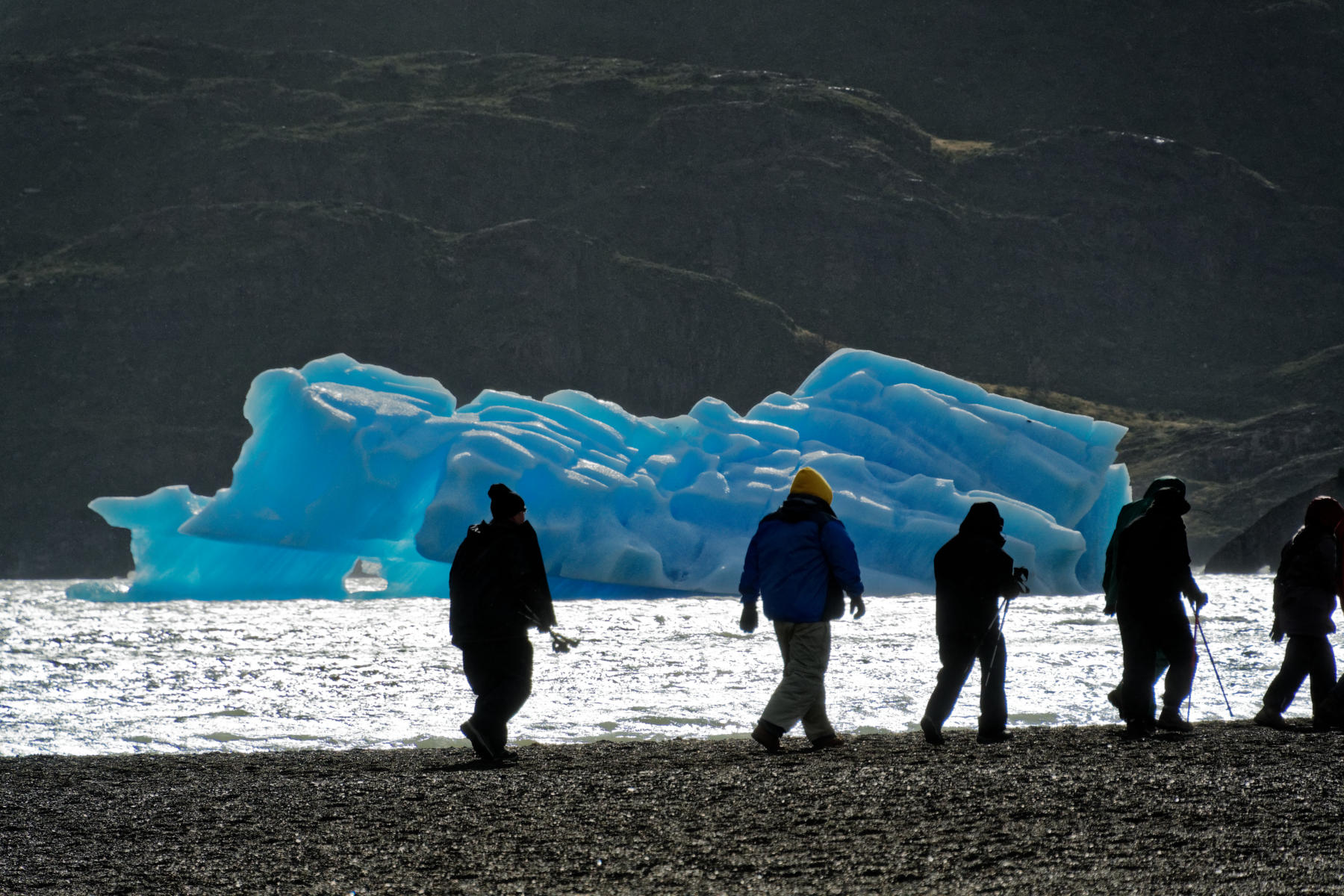 From there, we moved on to the main course of the feast. Well, lunch, actually, but its situation, by the shores of Lake Pehoe (pronounced “pay-o-way”, meaning “hidden” in the aboriginal language), gave us the first taste of the magnificence of the central massif, the Torres del Paine. 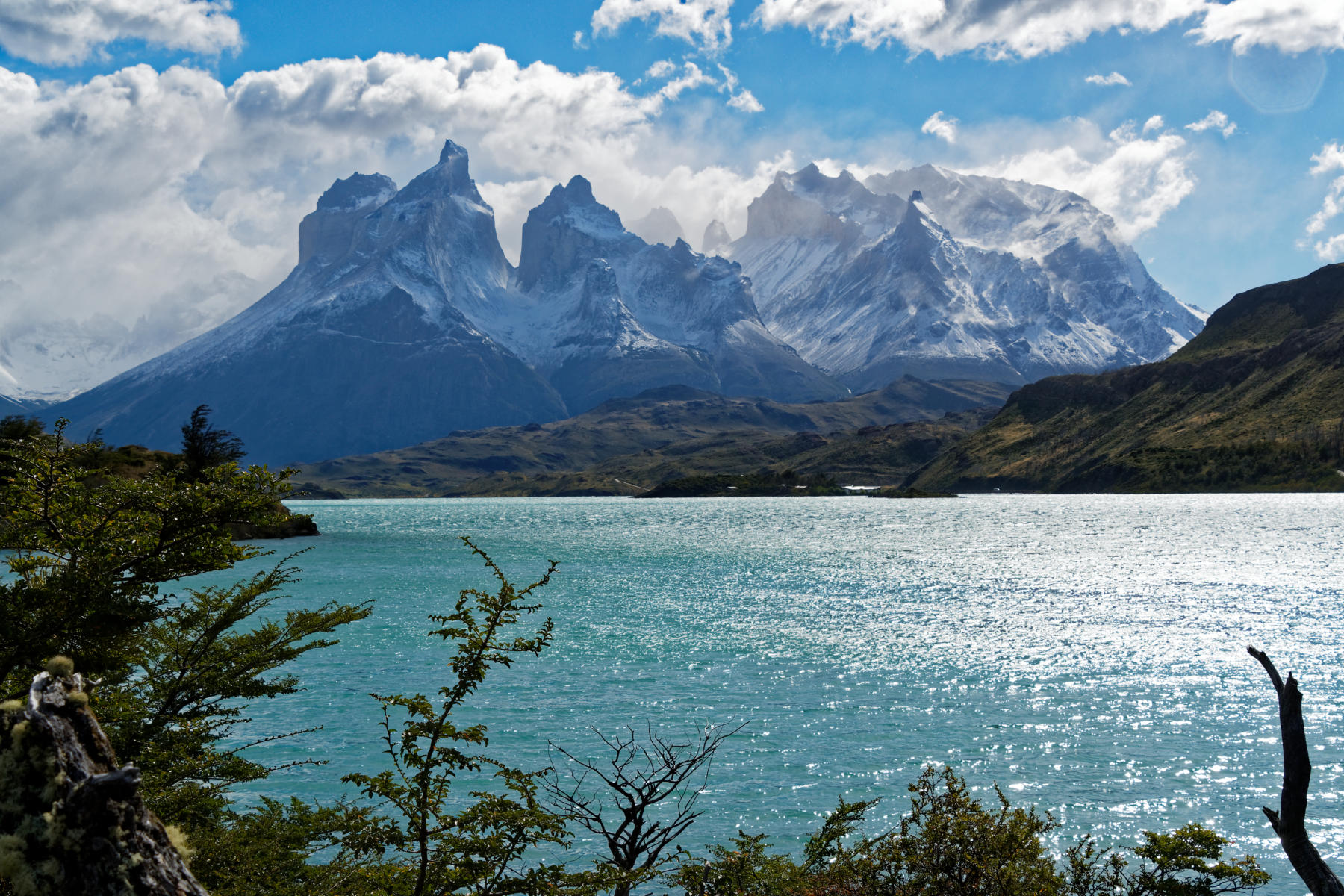 The blue colour of the water is what lends the name “Paine” to the region. You were paying attention earlier, weren’t you?

The rest of the day was spent being blown away by the magnificent views in other parts of the national park and blown away by the ceaseless winds, which was quite wearisome by the end of the day. Unsurprisingly many of the views featured the central massif from various angles 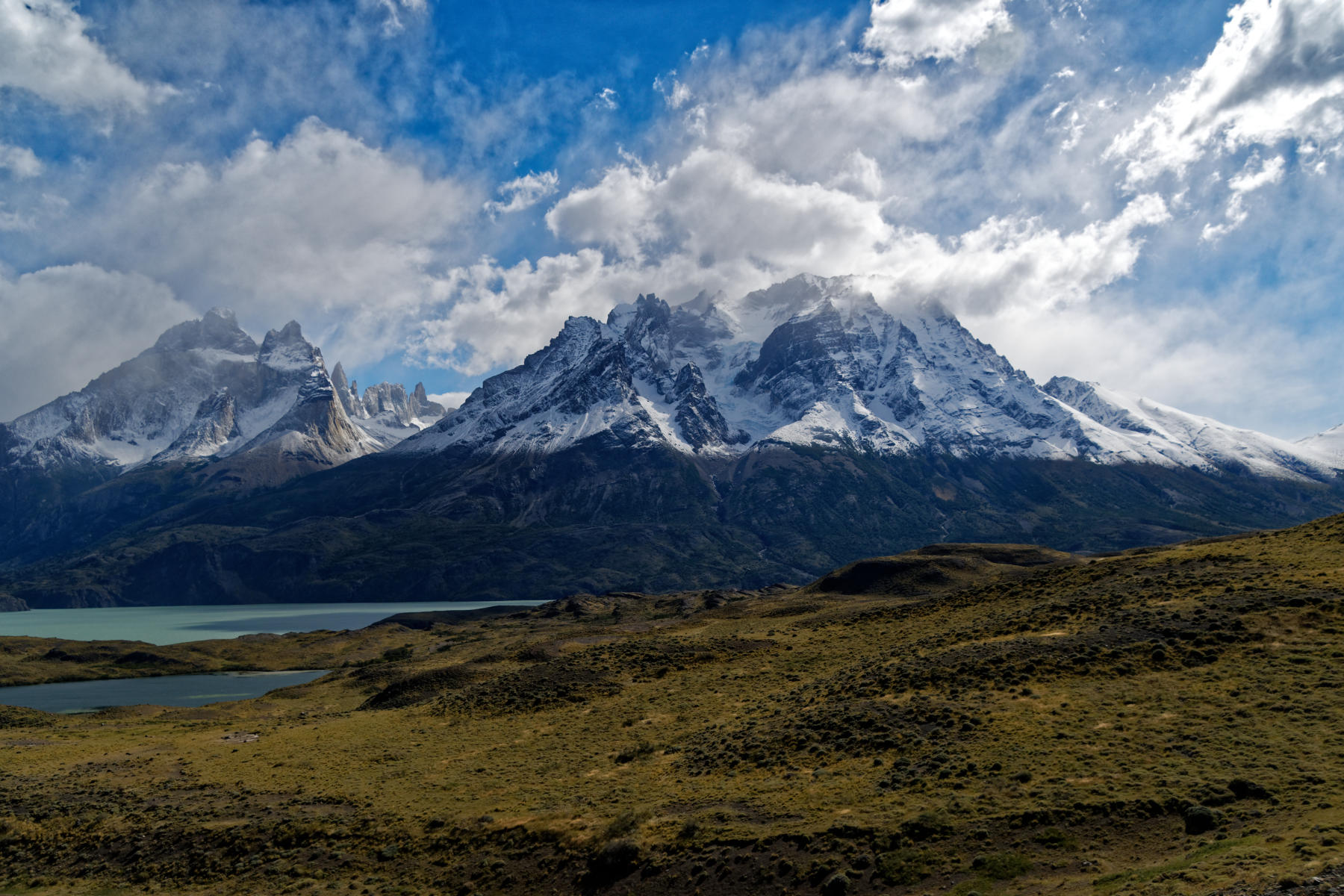 but also of other areas. A friend of mine, Sue Foster, remarked once, about a visit she paid to the highlands of Scotland, that it was a “Wild And Lonely Place”. Sue invented the WALP Factor and so many areas of the national park are definitely WALP Factor 8! 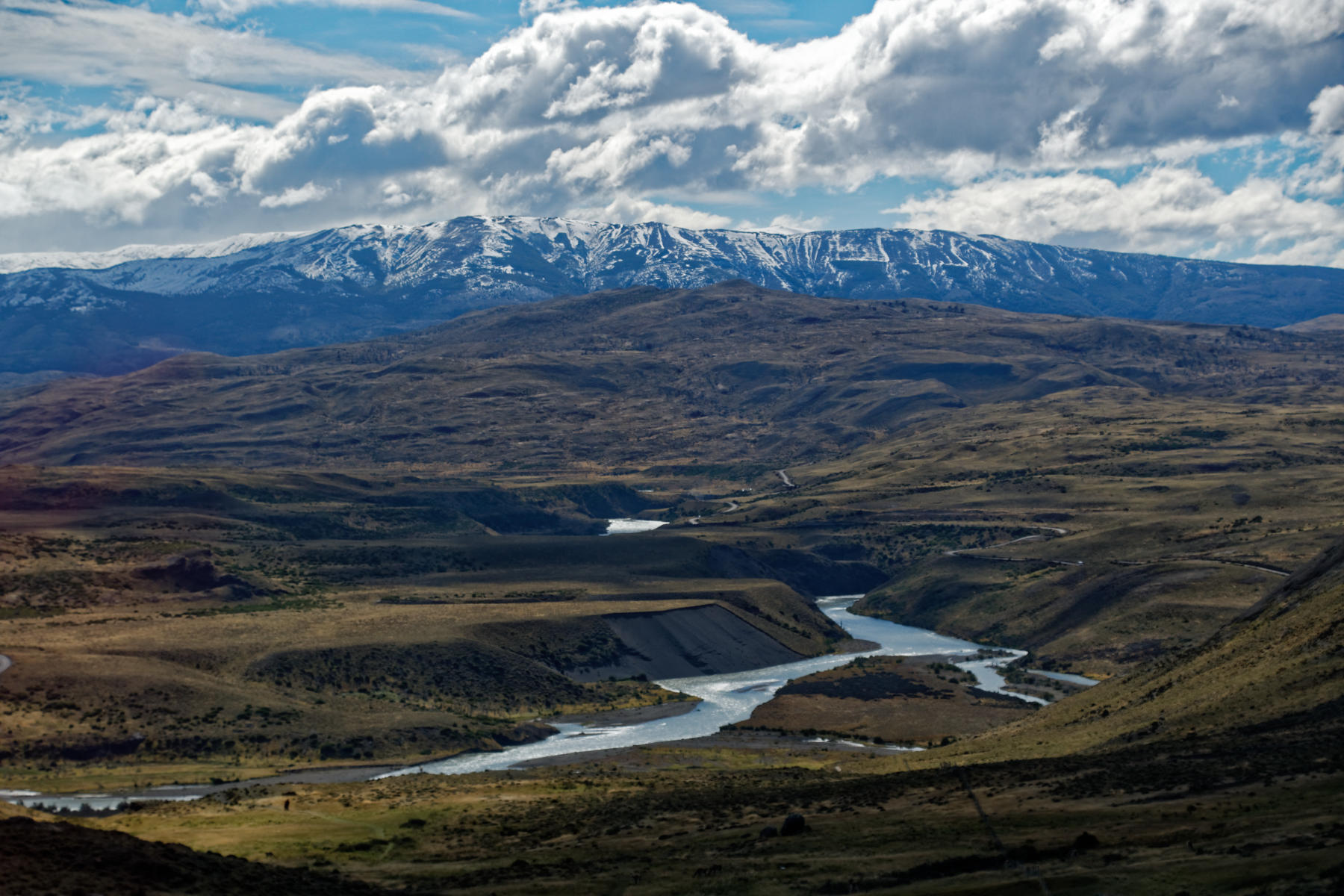 As well as dead wildlife such as the Mylodon mentioned earlier, there was a good selection of local fauna which were very much alive: 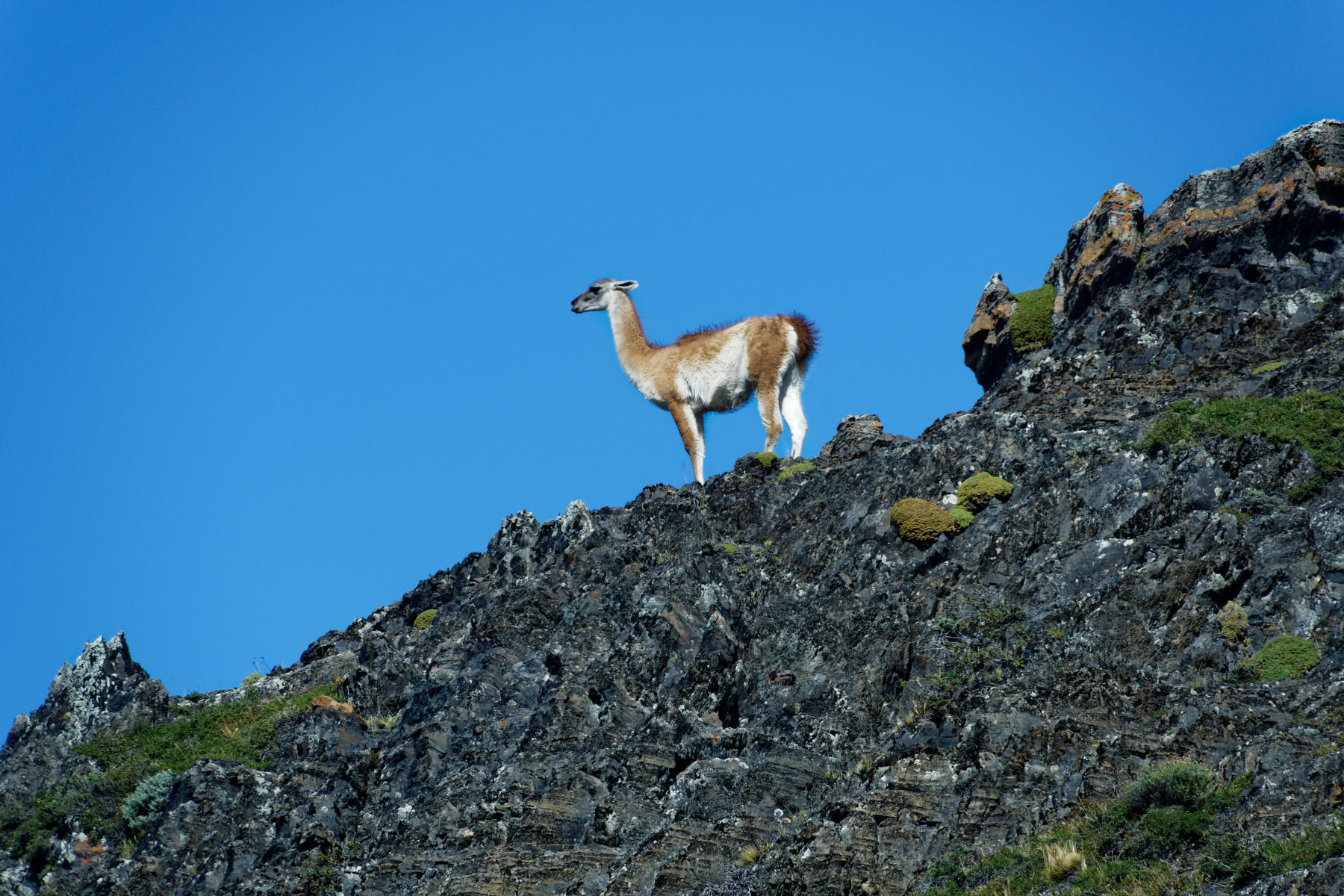 Guanaco – this one a young one standing sentinel to look out for predators such as puma or fox, 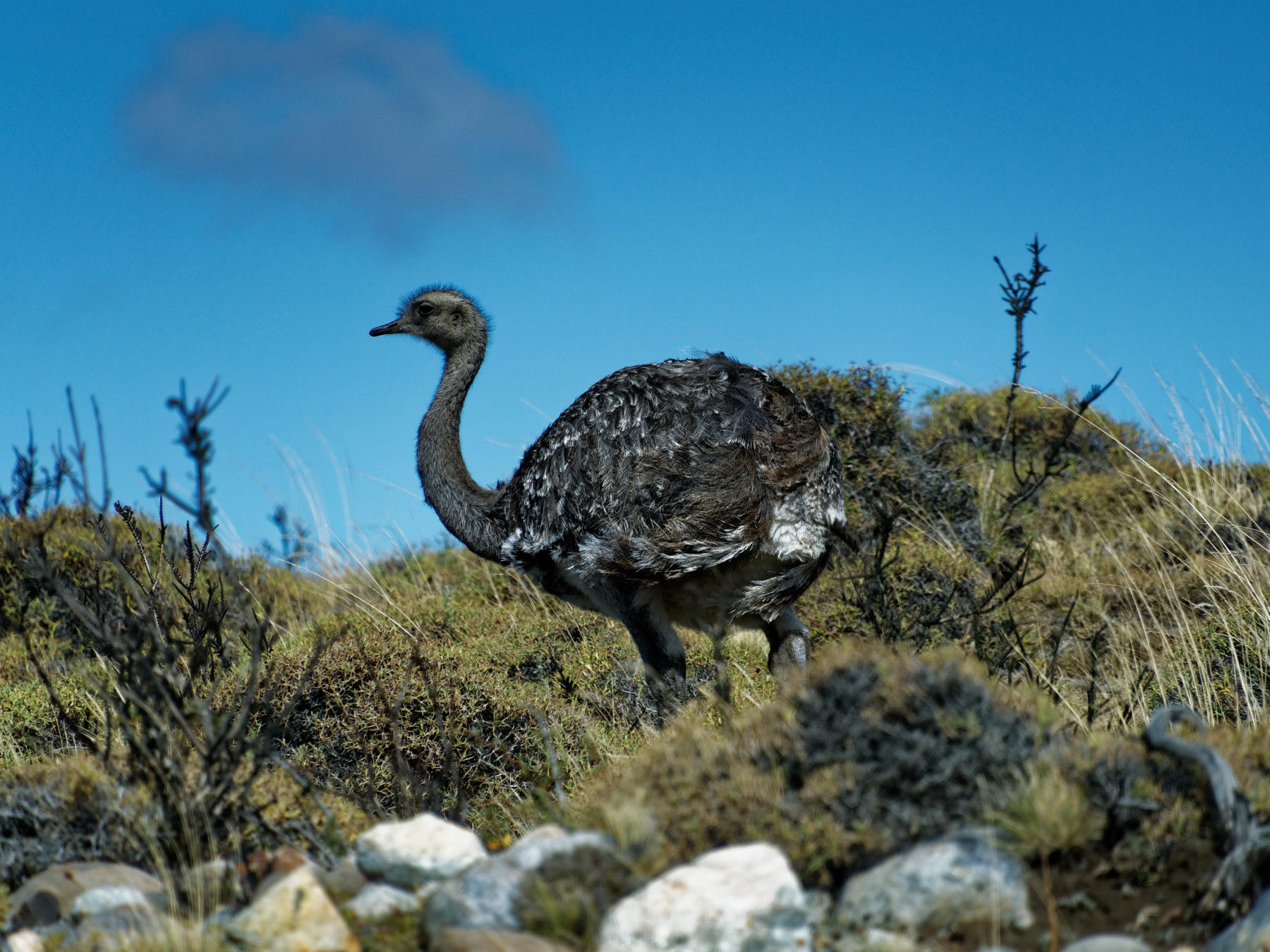 Rhea (this is a rhea view of one), 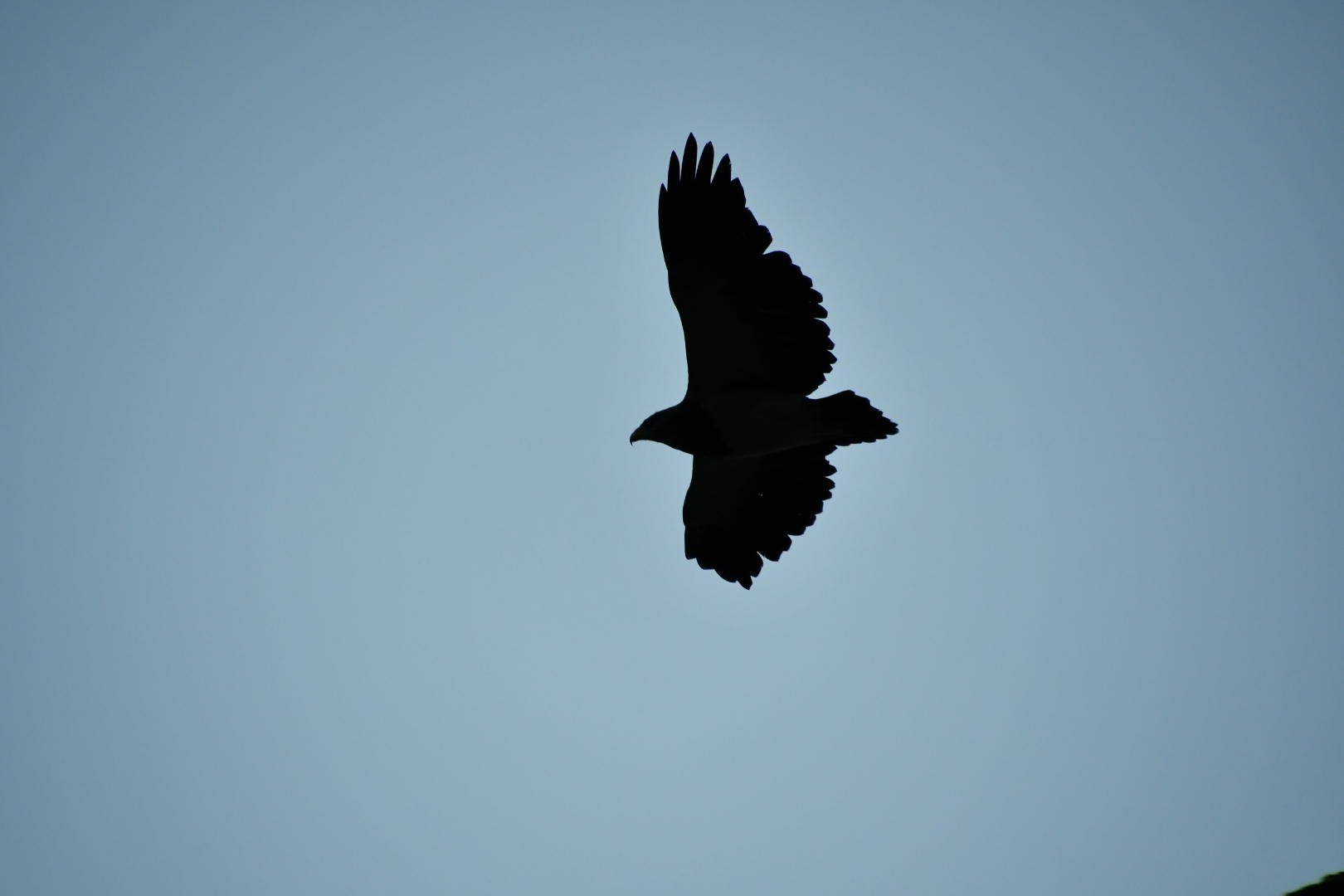 Eagles (this is a black-chested eagle), and 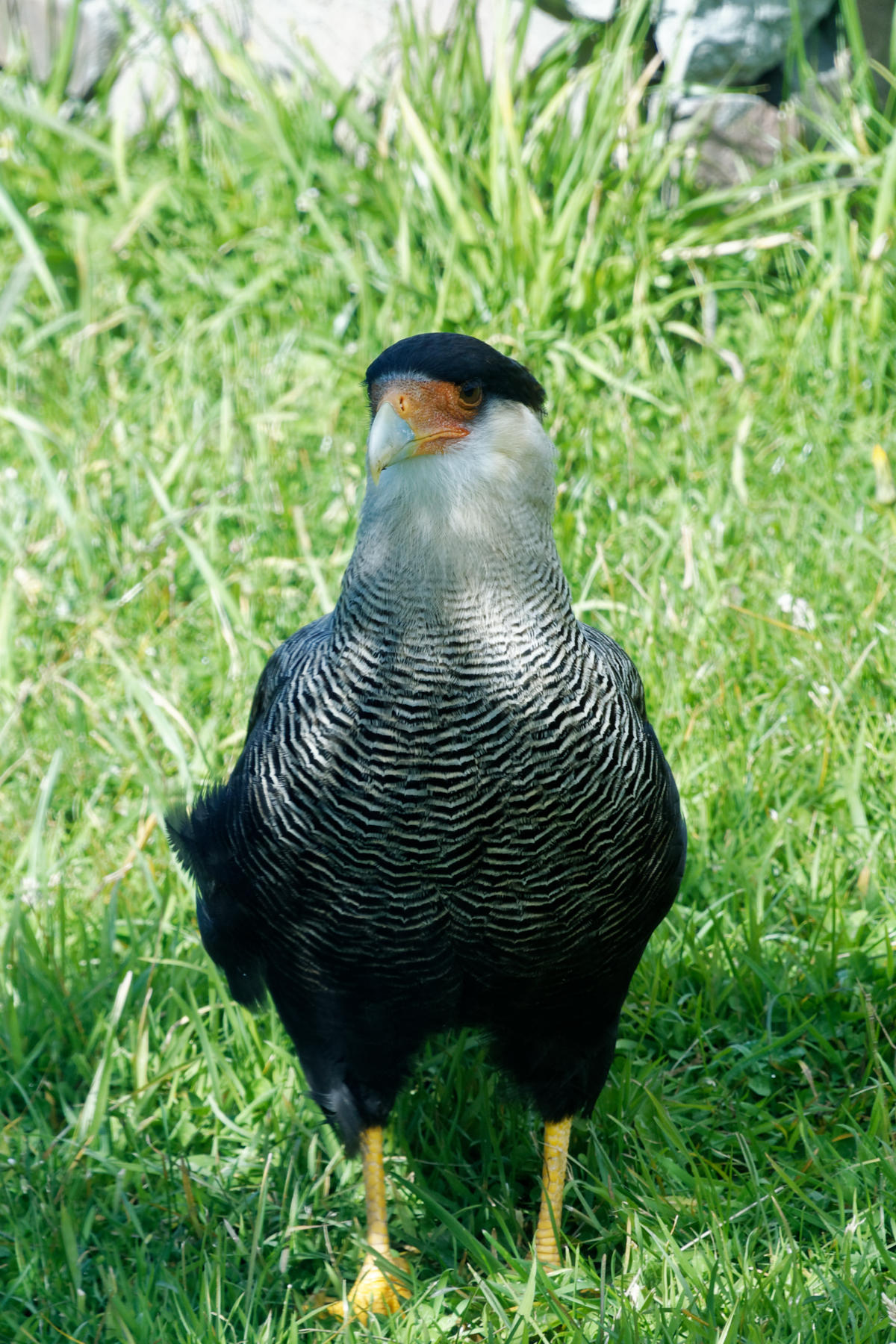 a Southern Crested Caracara (there are other varieties).

All in all the Torres del Paine is an excellent place to visit. I have friends who have hiked around the central massif, a process which takes several days, and so I suppose we only scratched the surface of what’s available. But we were lucky with the weather and it was a day well spent.