Tuesday Feb 26. After a good night’s sleep, lulled by the song of our crickets, we found that the wind, and its accompanying flying sand, had dropped somewhat: so the only hazard we had to deal with over breakfast was the flies, who fancied a share of our fare. 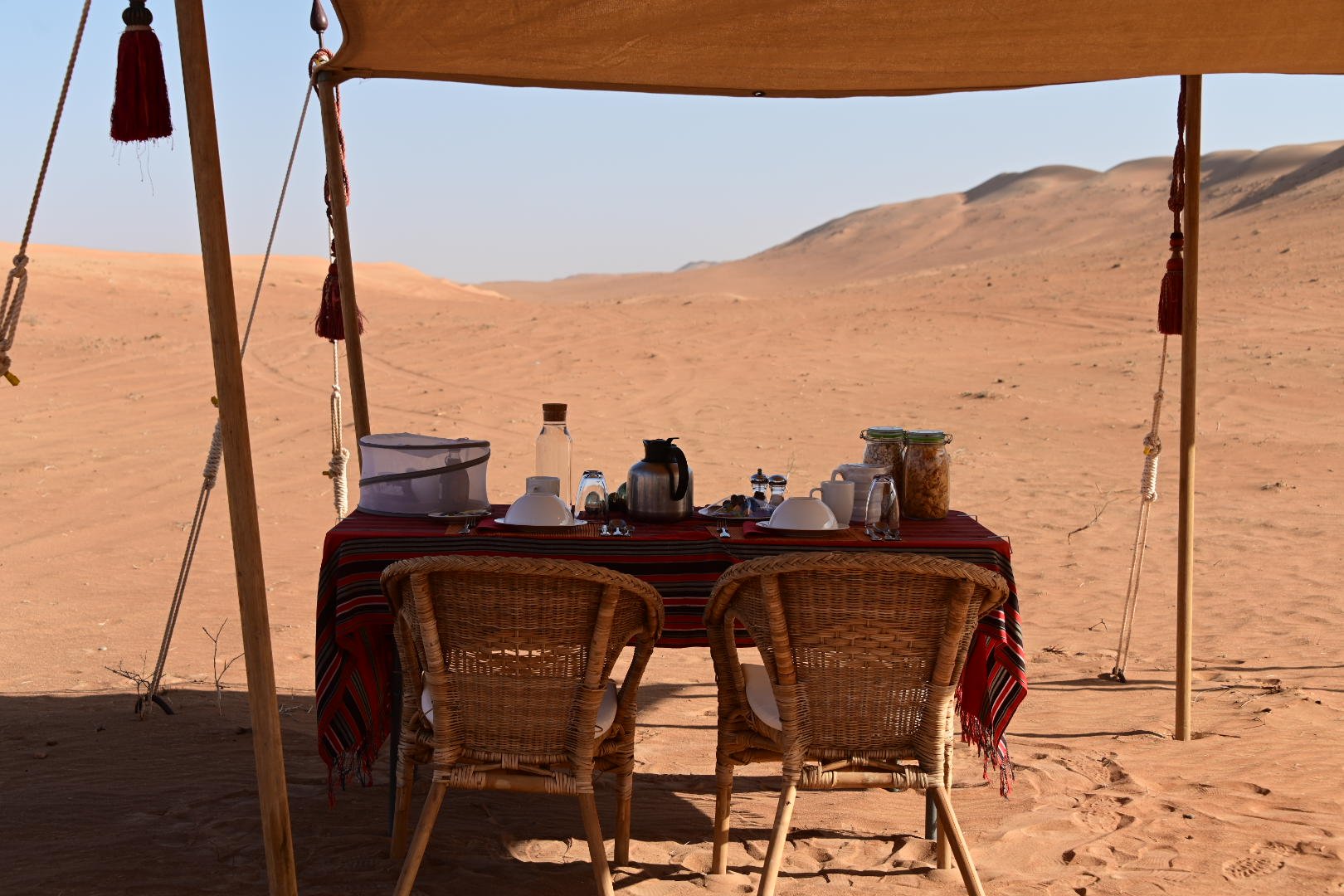 Apart from covering the food, another way to discourage them is to burn Frankincense; the scent seems to keep them away. The breakfast was, as all meals at the Hud Hud camps, excellent, and so we set out for the day feeling replete.
On the way out we passed a goat farm where the goats were all trooping along for their morning drink. 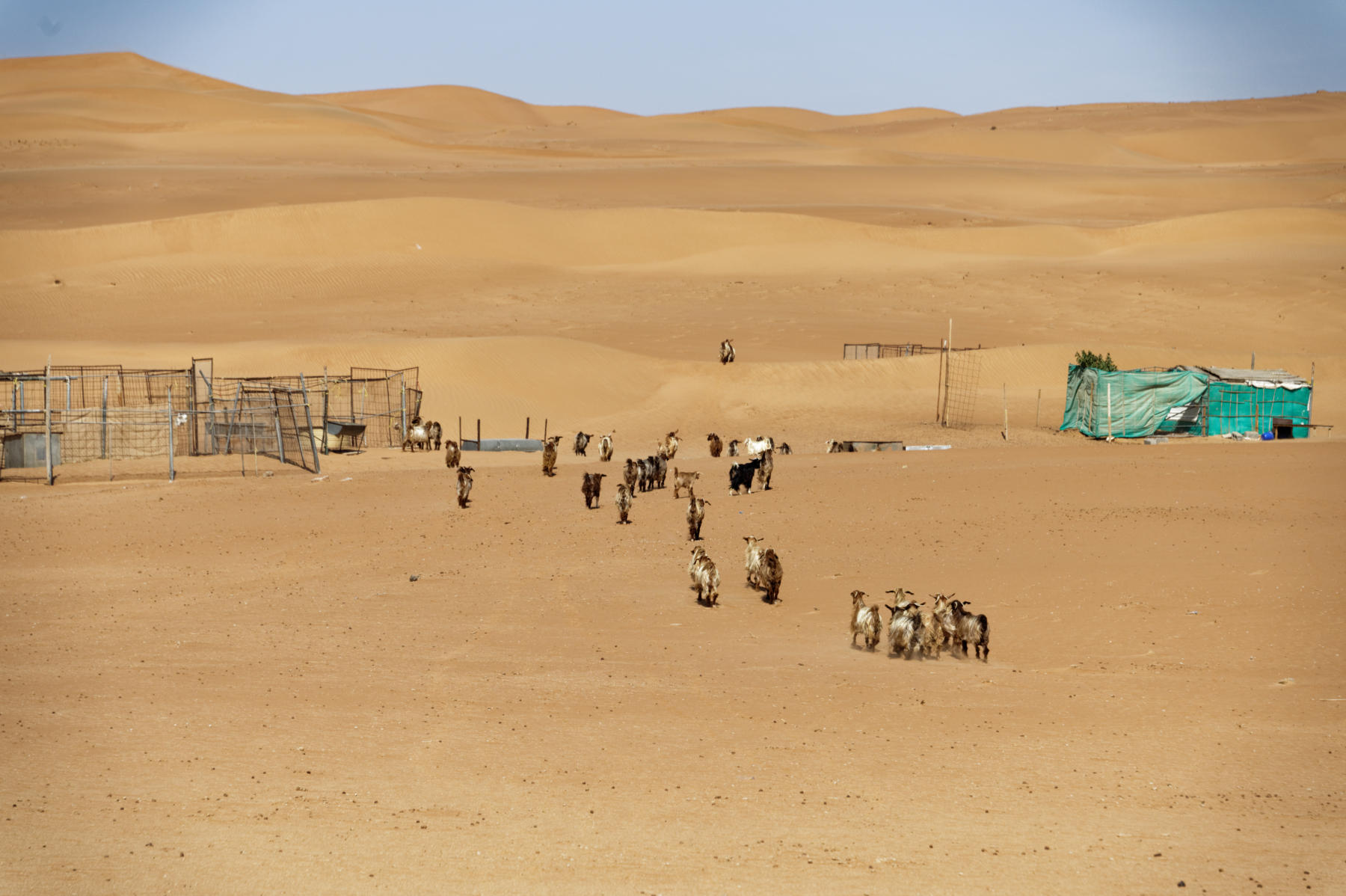 As we exited the desert, it was interesting to see just how clear and sharp was the delineation between it and not-desert – you see flat flat flat flat – desert, 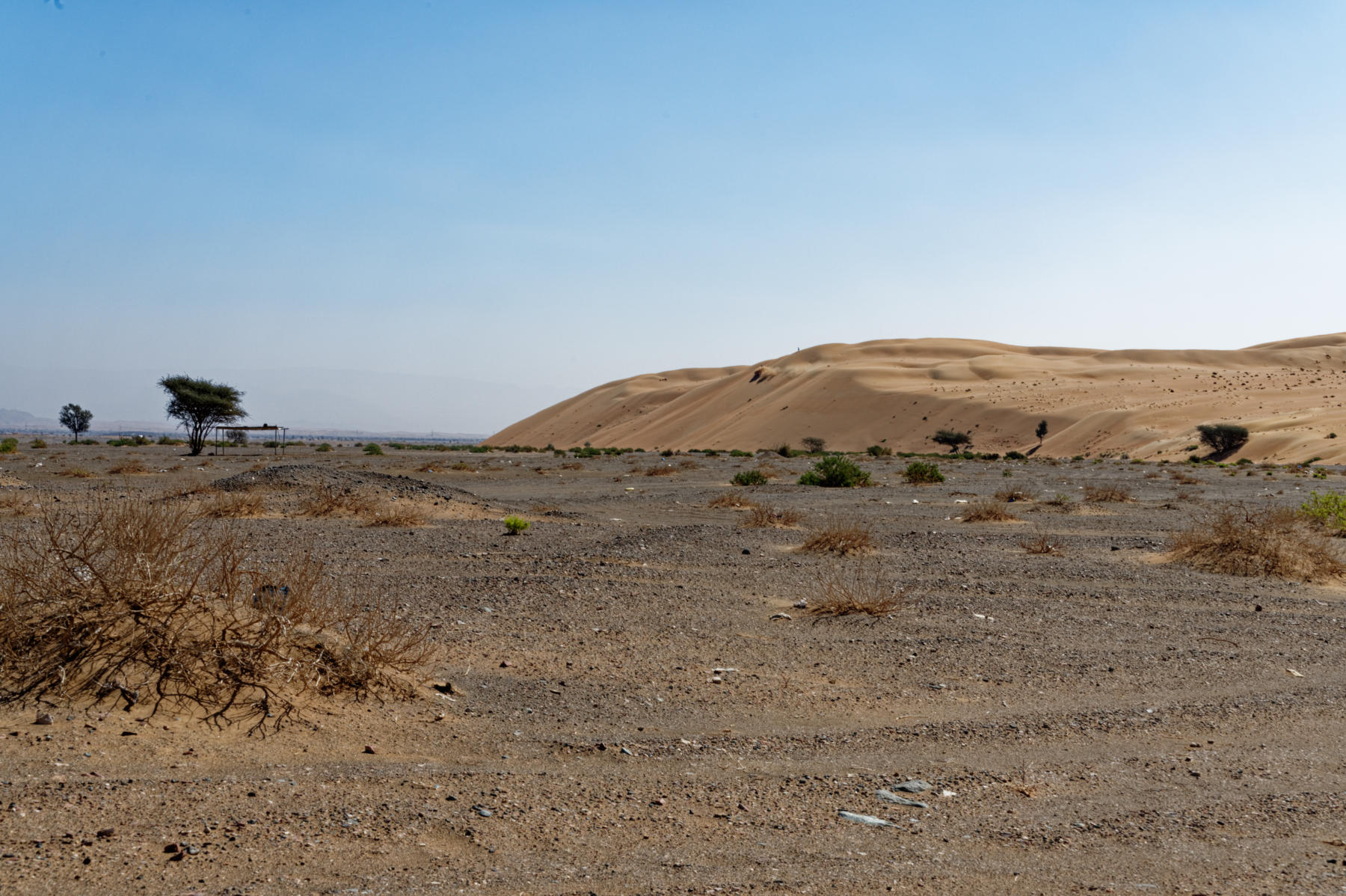 alongside which is a stern warning! 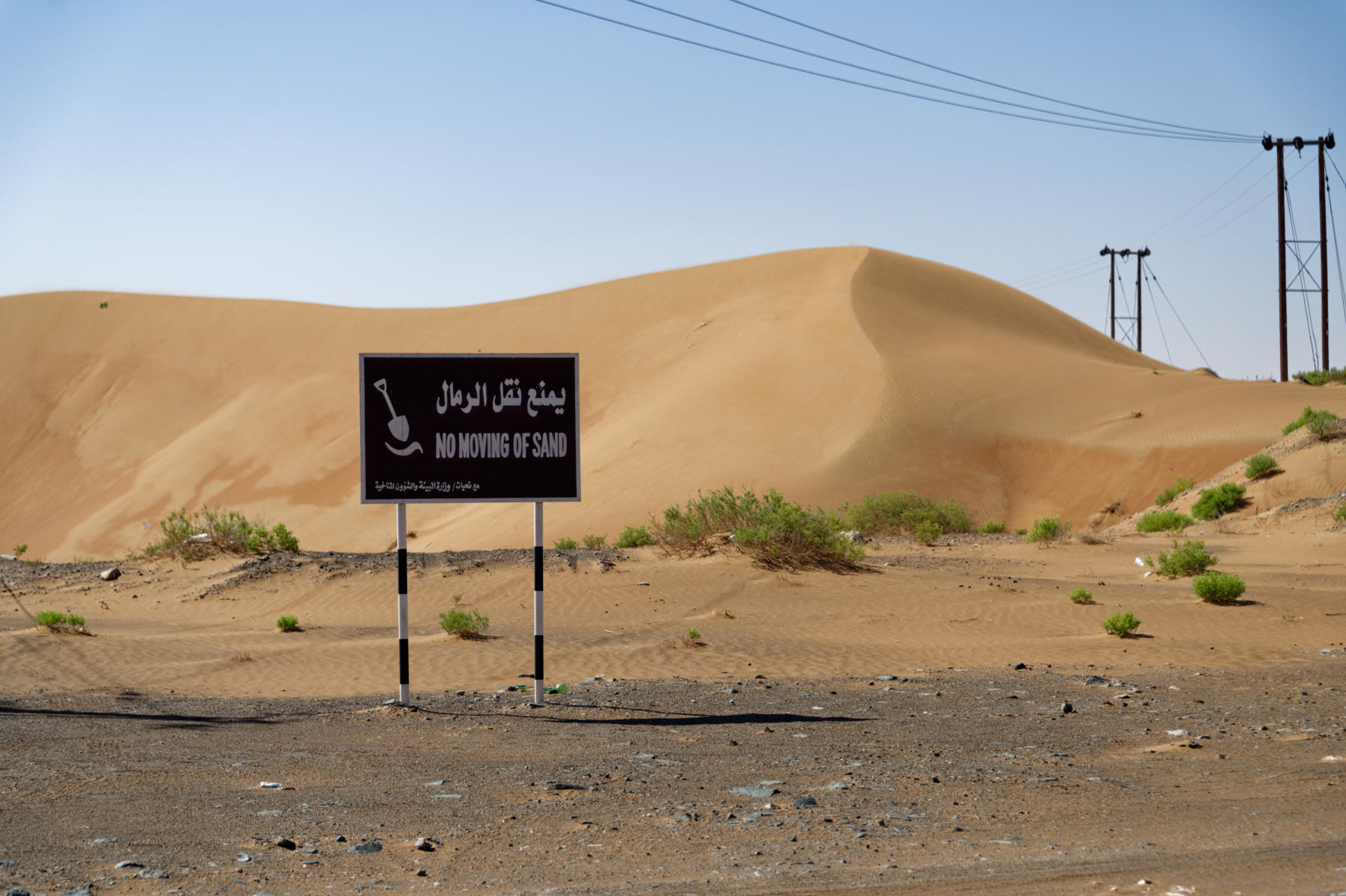 Frankly, I’m not sure how they’d know if you popped in and took a couple of truckfuls, but anyway….a longish drive back into the mountains took us to the outskirts of the village which takes its name from one of the most popular wadis in the area, Wadi Bani Khaled. 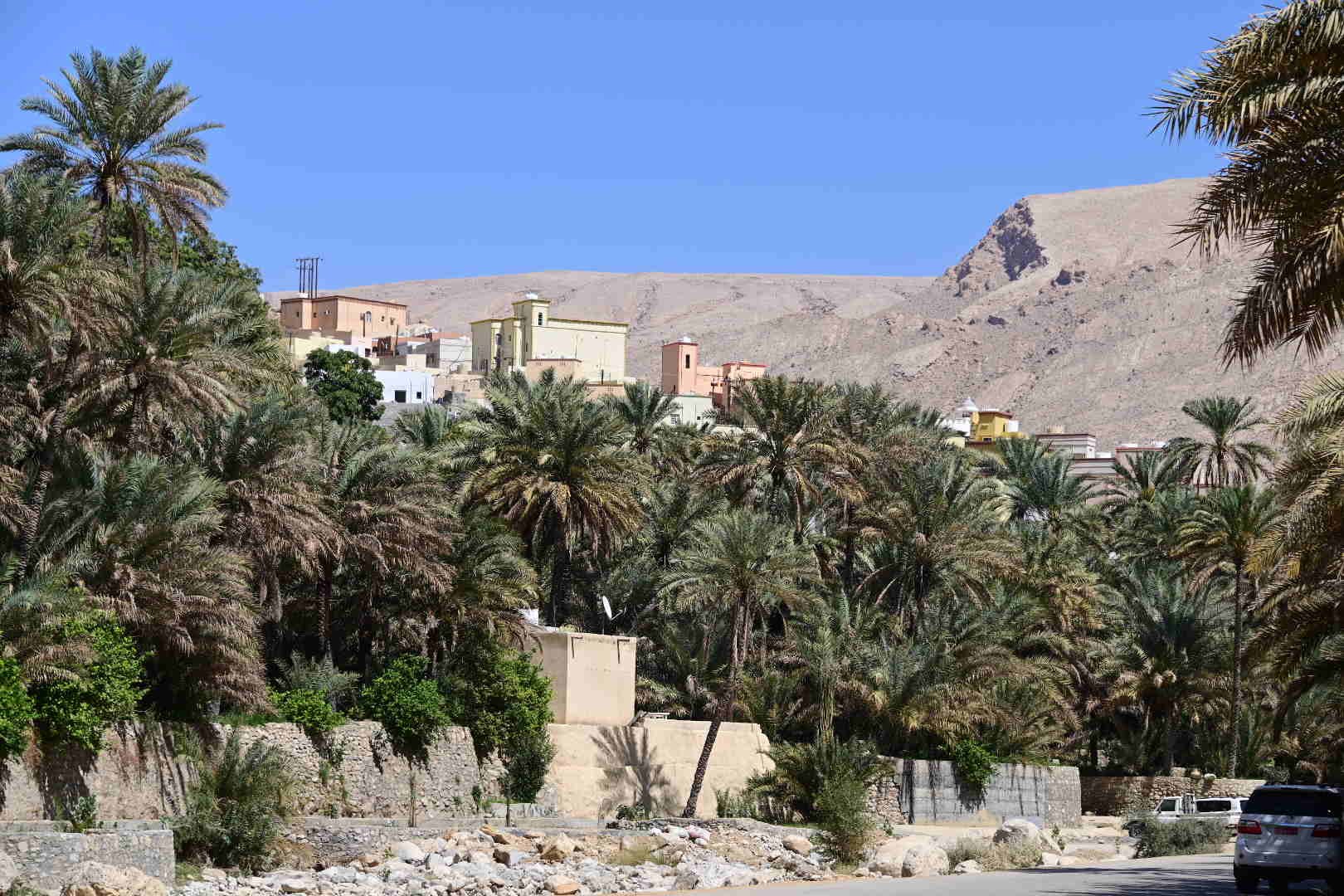 Before we took a walk along the banks of the wadi, Rashid took us off road to see it from above. The view over the village is quite striking 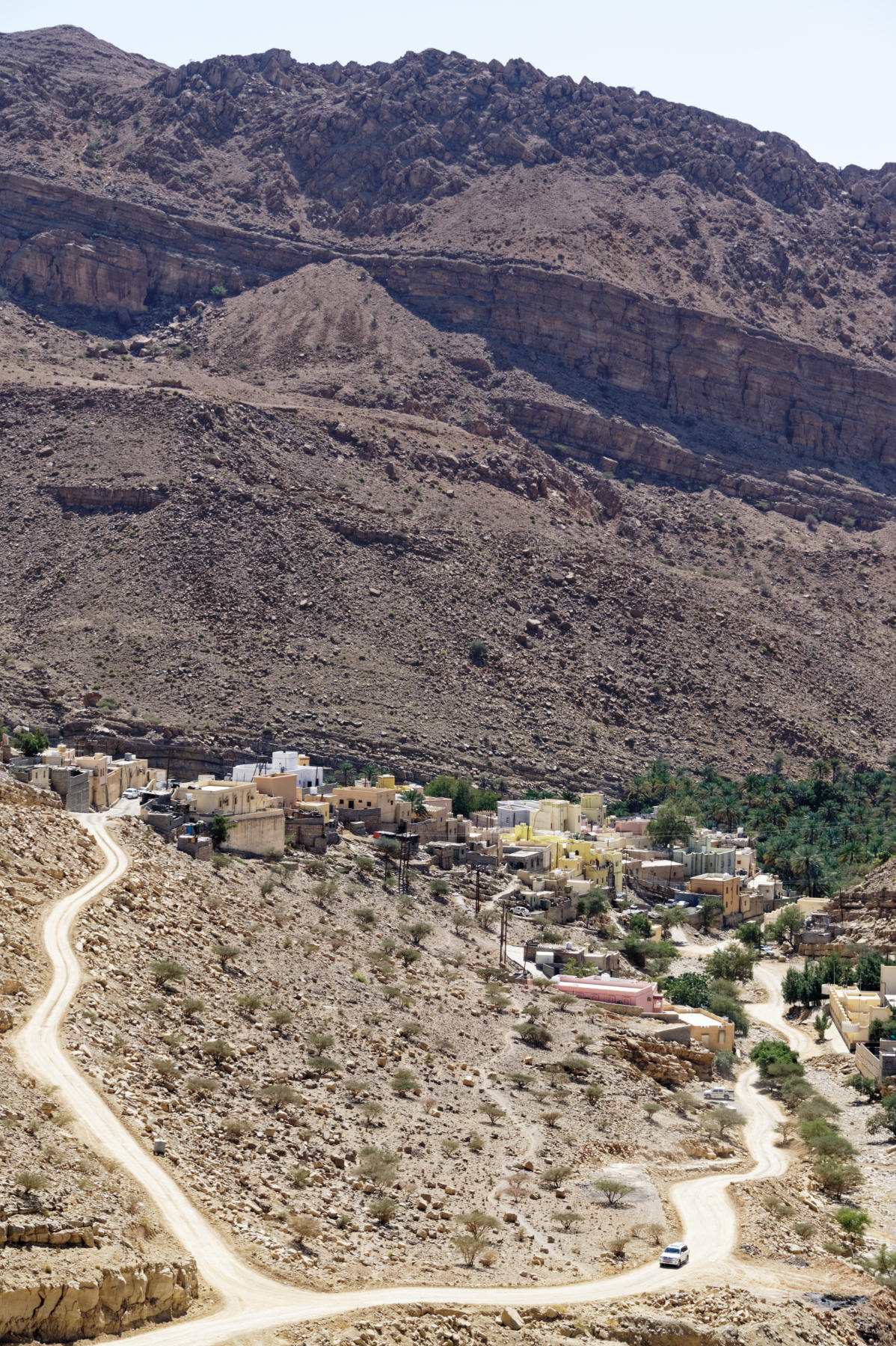 but the view of the wadi itself from even higher is, I think, the most spectacular view of the holiday so far. 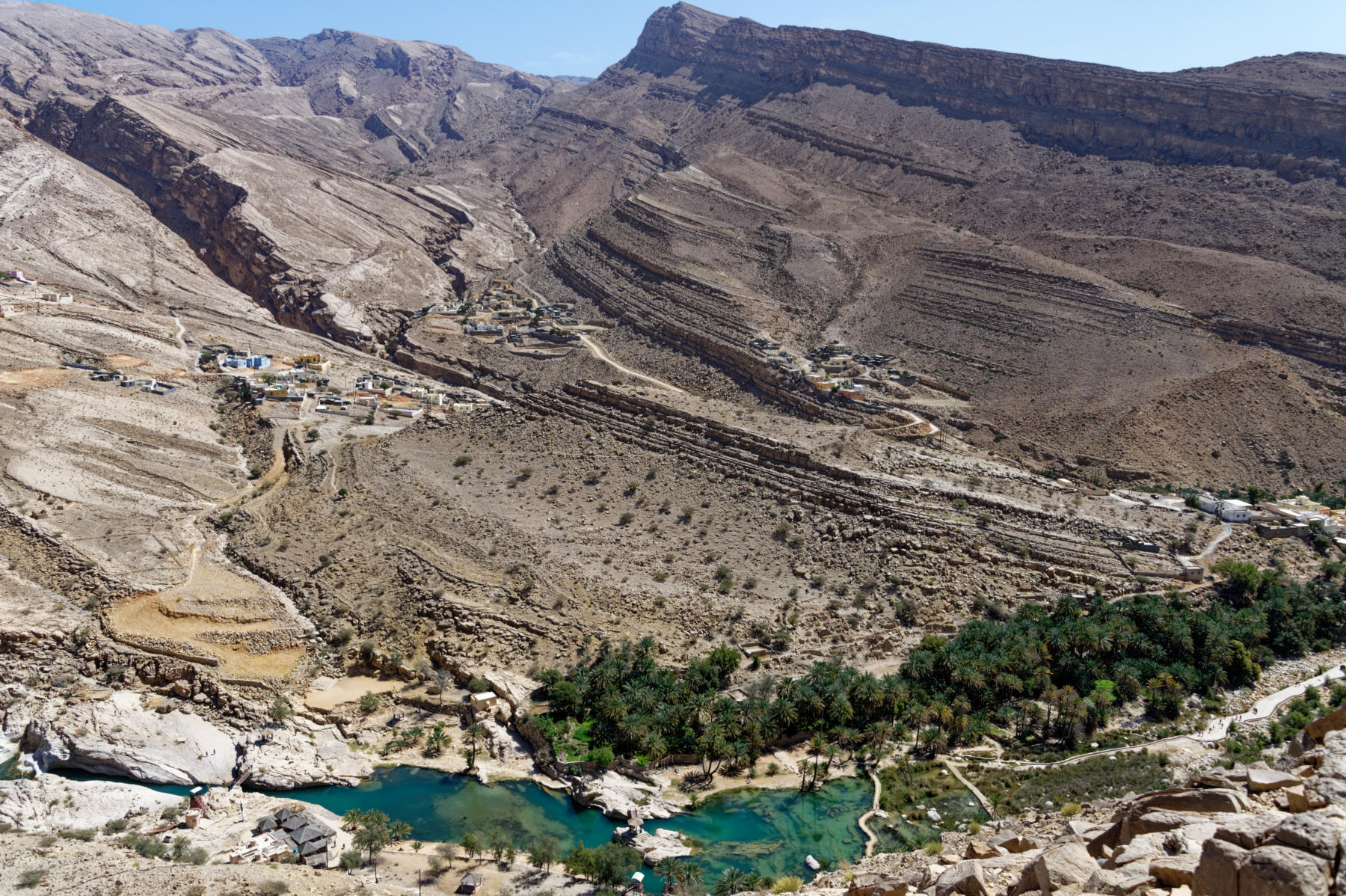 The photo hardly does it justice; the contrast between the ruggedness of the rocks, the way the village nestles among them and the greenness of the wadi below makes this absolutely remarkably to stand and see. Even Rashid was struck by it 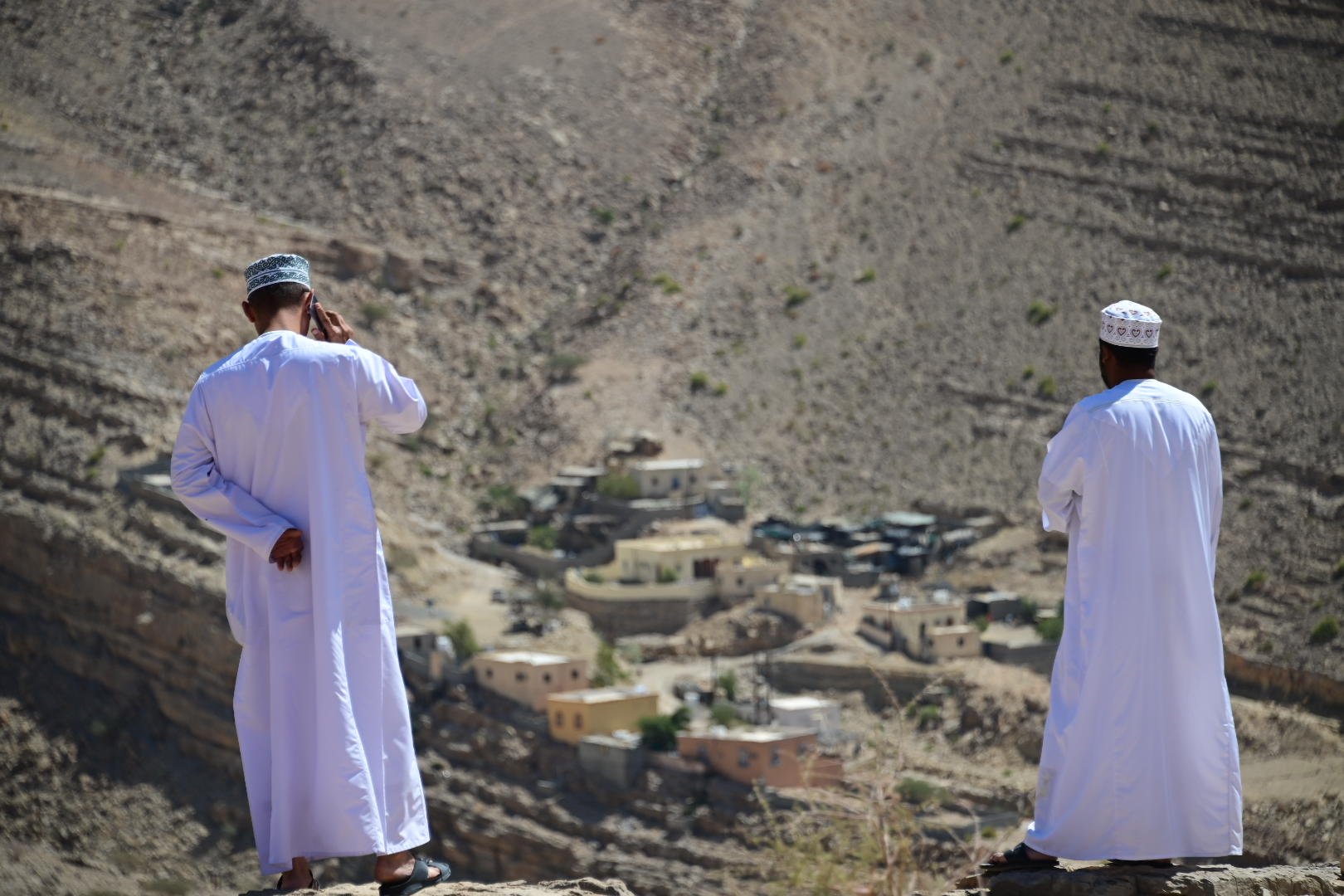 although his mate appeared to have his mind elsewhere.
It looked deserted from up there. We went down to discover that the parking was nearly full and that there were hordes of people heading up the wadi. Bloody tourists, giving tourism a bad name. However, it was a nice enough walk up the wadi, which has several irrigation channels running off it, obvs – the Omanis are vigilant in finding ways to get water to where it’s needed. 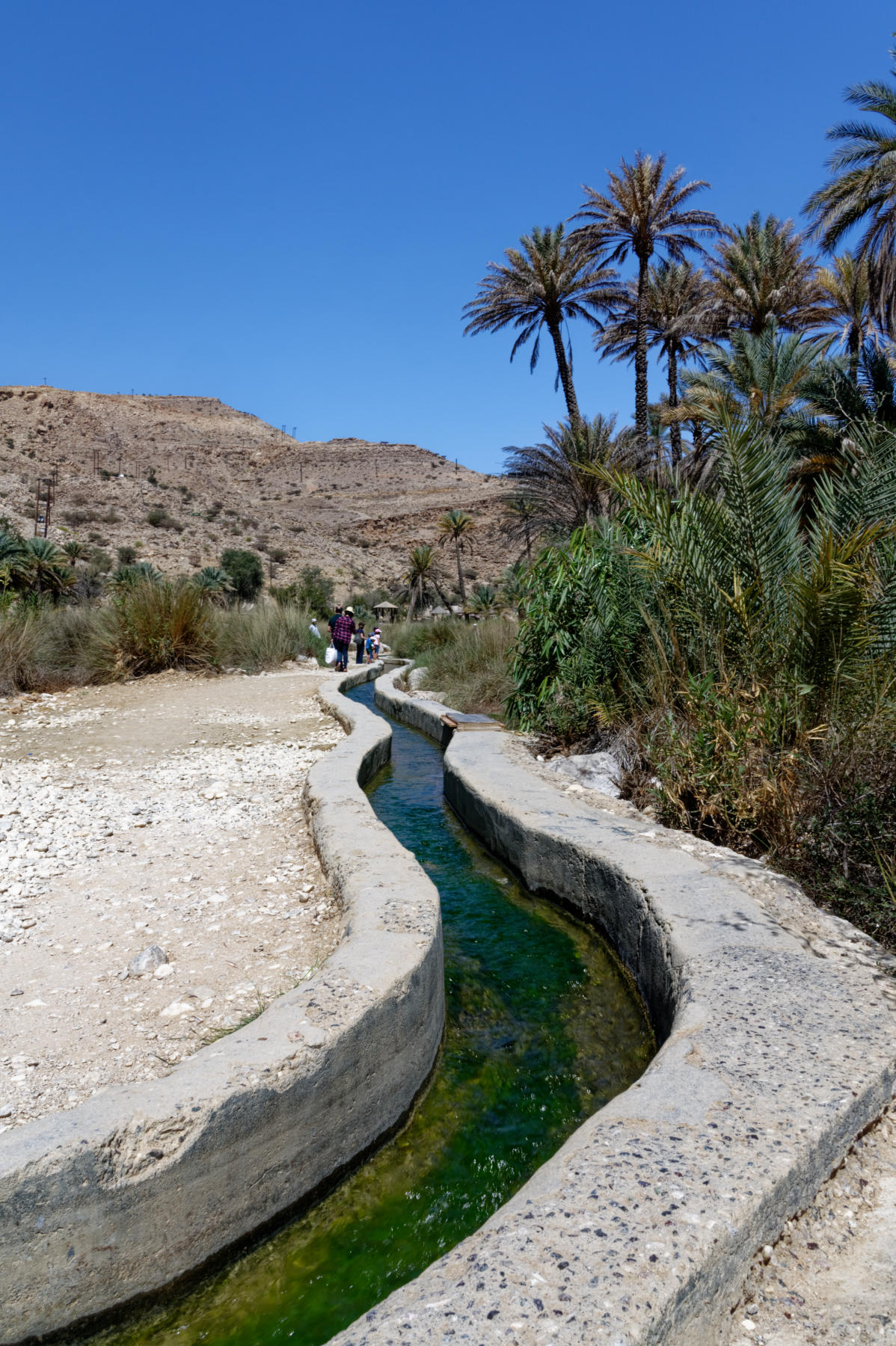 After a short walk, you arrive at a couple of pools 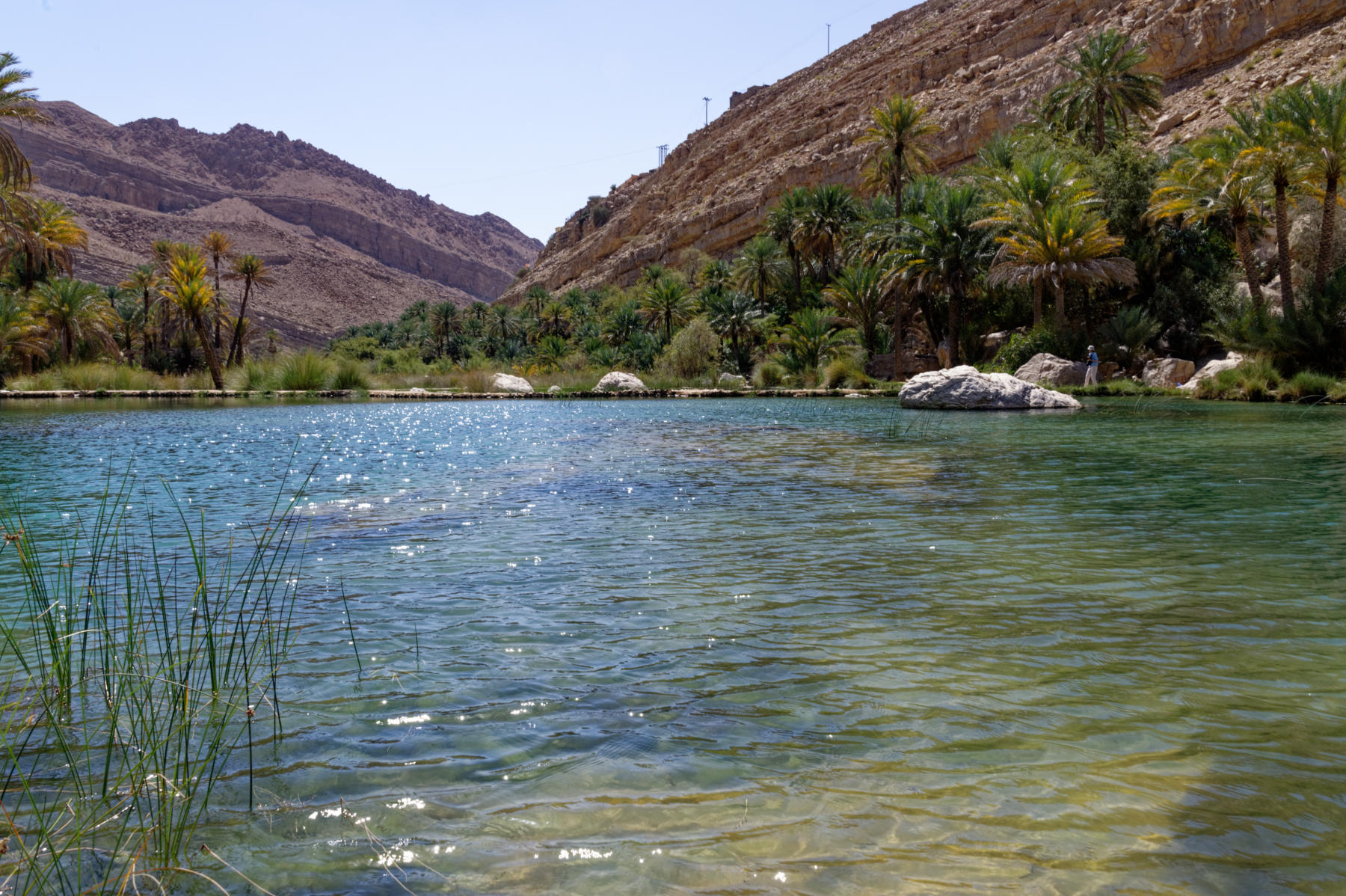 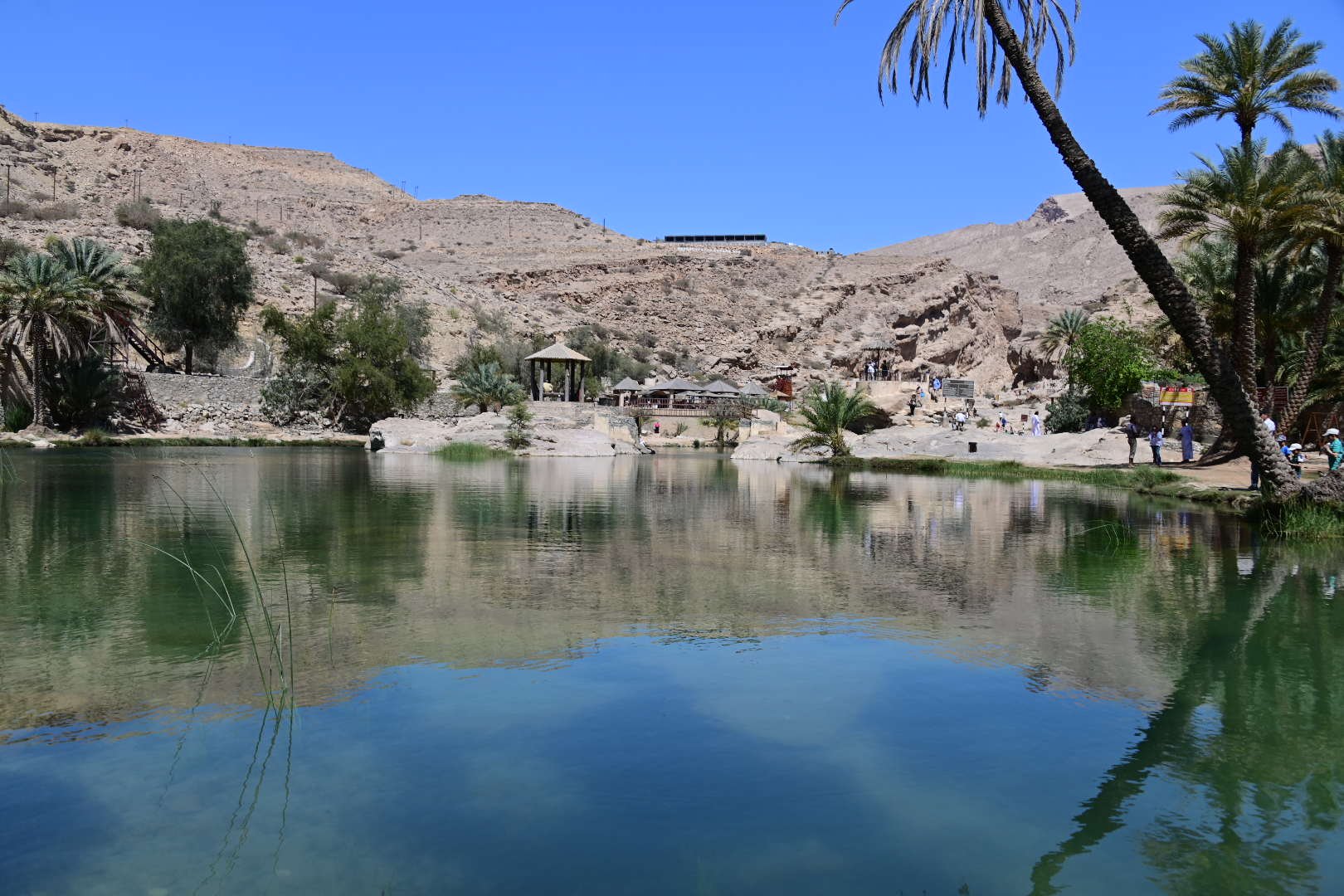 with specially-installed viewpoints and also a restaurant, on the left in the picture below. 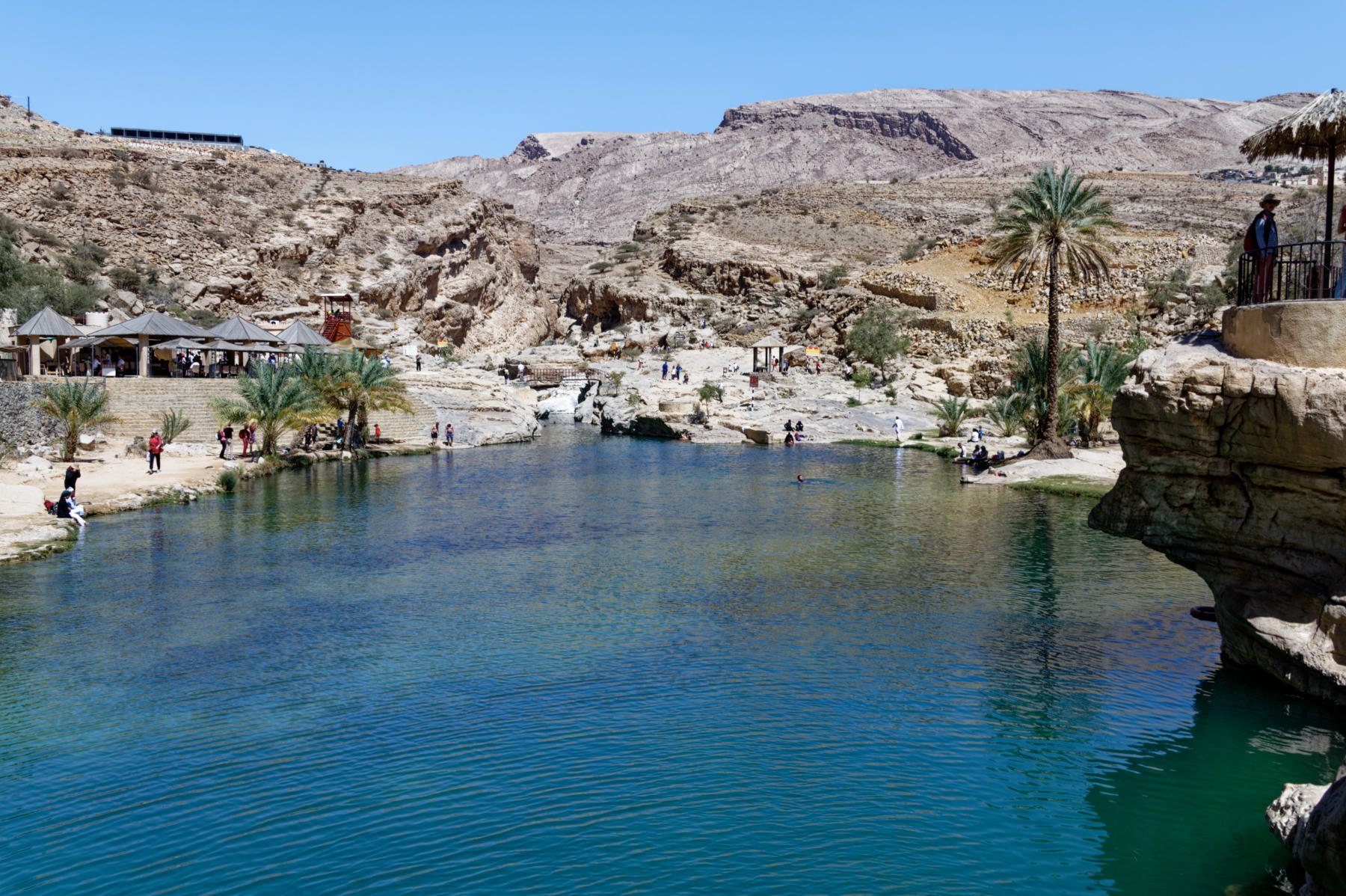 The restaurant serves a mean lemon-and-mint juice, and Jane reported herself satisfied also with the watermelon juice. The juice stop gave us a nice view of people having a nice time.

It’s then possible to walk a little way further up the wadi, where you can see pools that people can paddle or swim in. 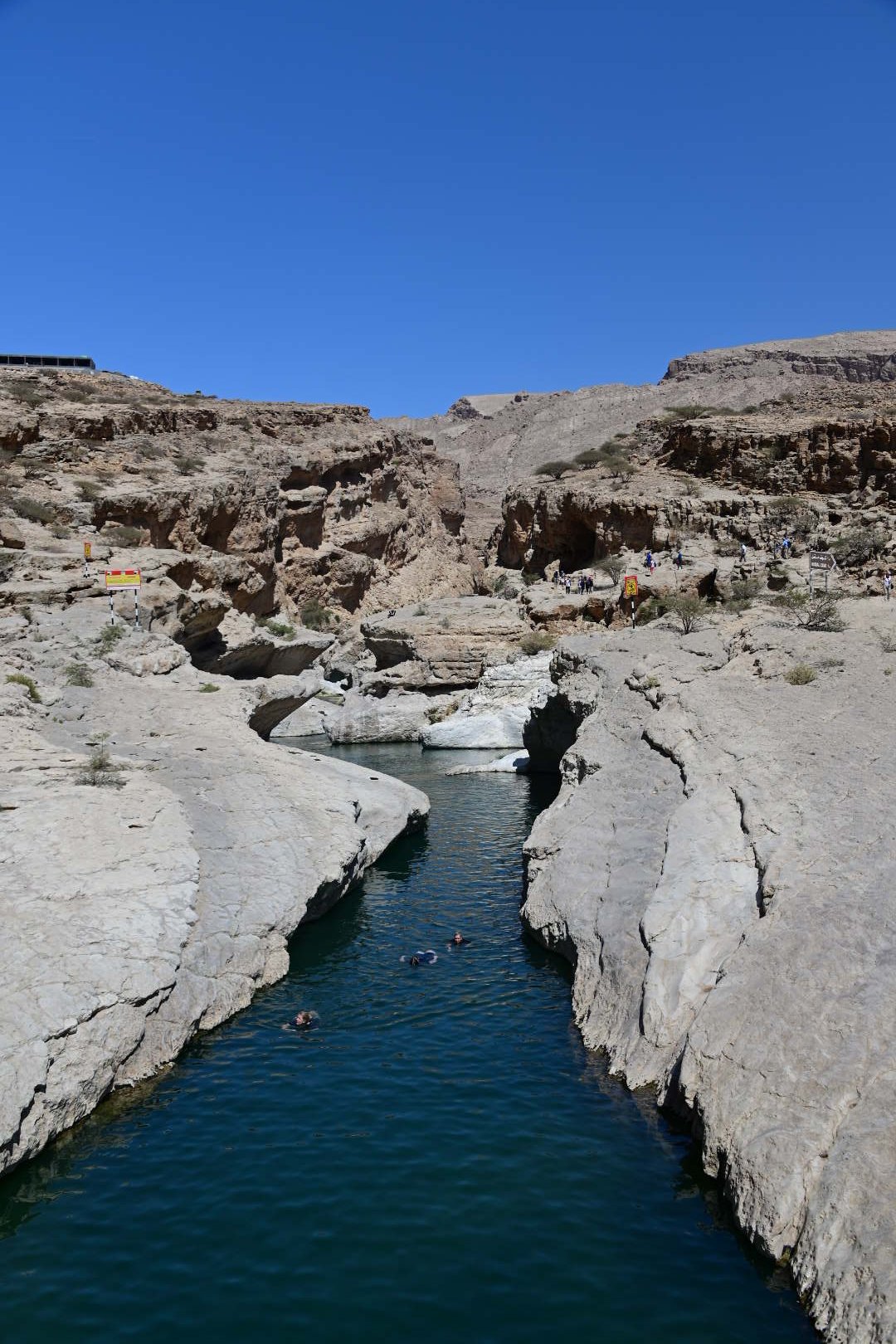 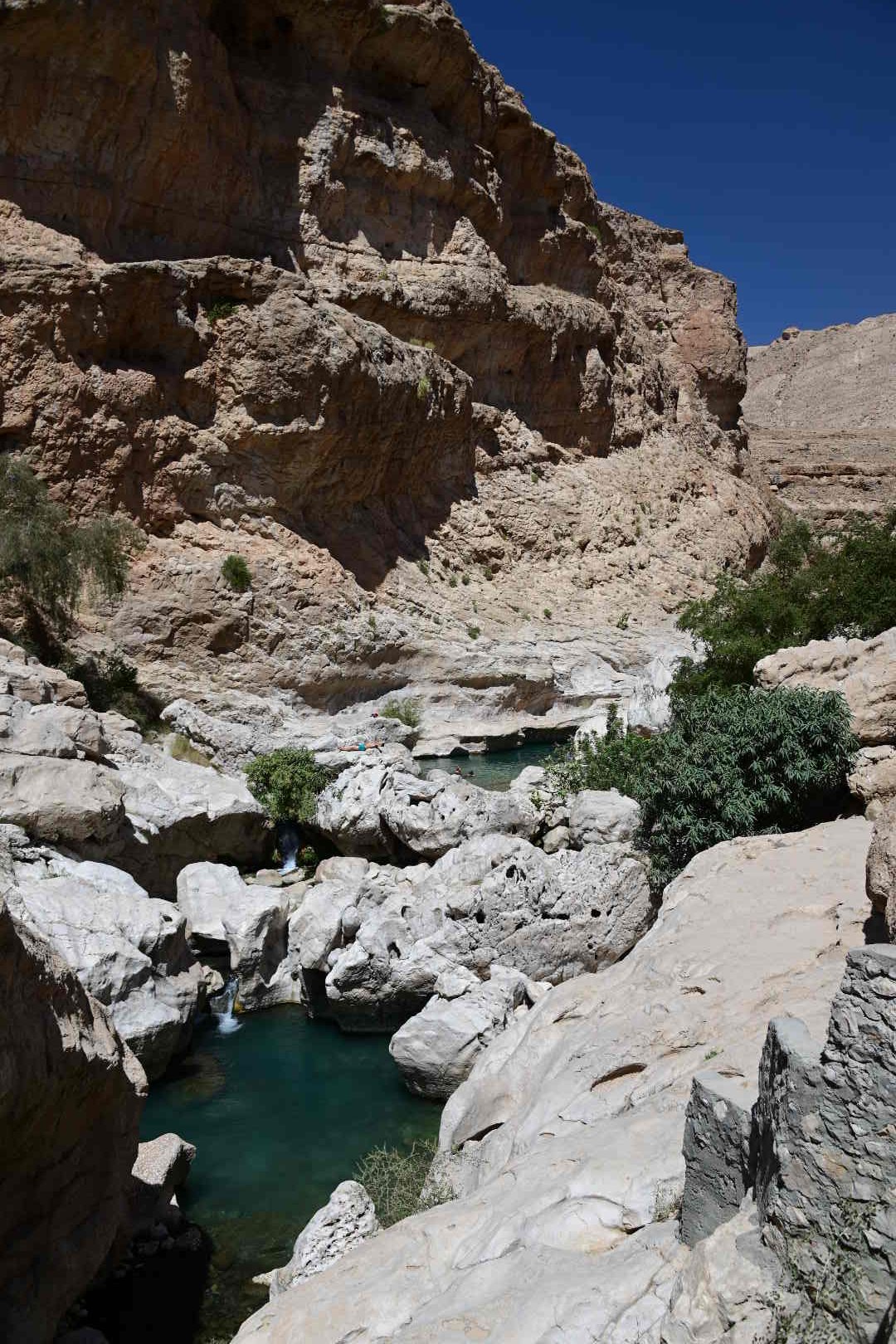 though, this being where it is, there are some caveats about dress 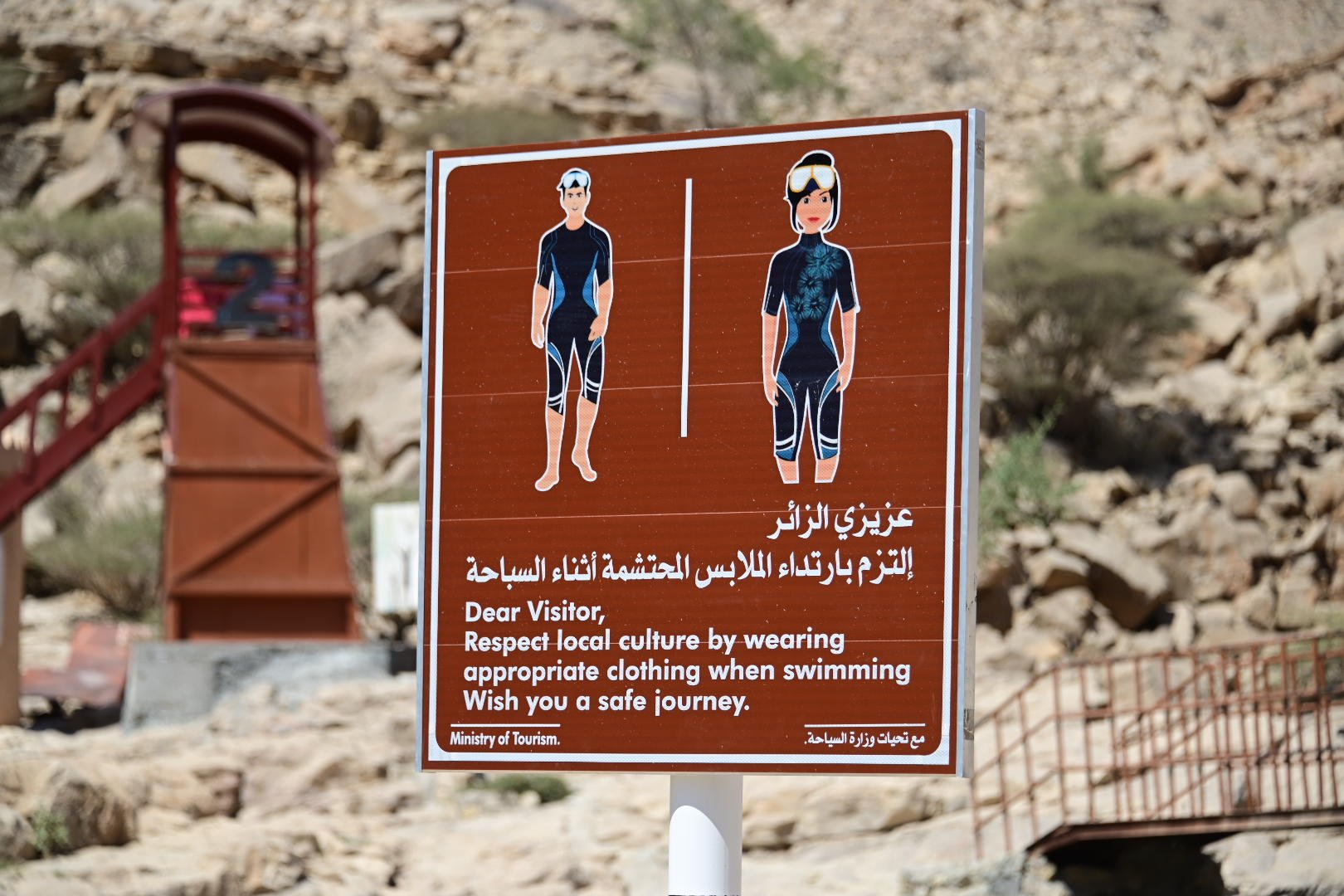 (which were being quite widely ignored, sad to say; bloody tourists again, eh?).
Beyond that the path gets very rocky and in places slippery, so we didn’t go much further. on the way back, Jane got a fishy pedicure:

which started off apparently being very ticklish but soon became quite addictive. There was certainly one chap just up from where Jane sat who had been there with his feet in the water for quite some while.

After we’d exhausted the entertainment possibilities we headed off for lunch. The path beside the wadi passed a couple of mango trees, both magnificently in flower. 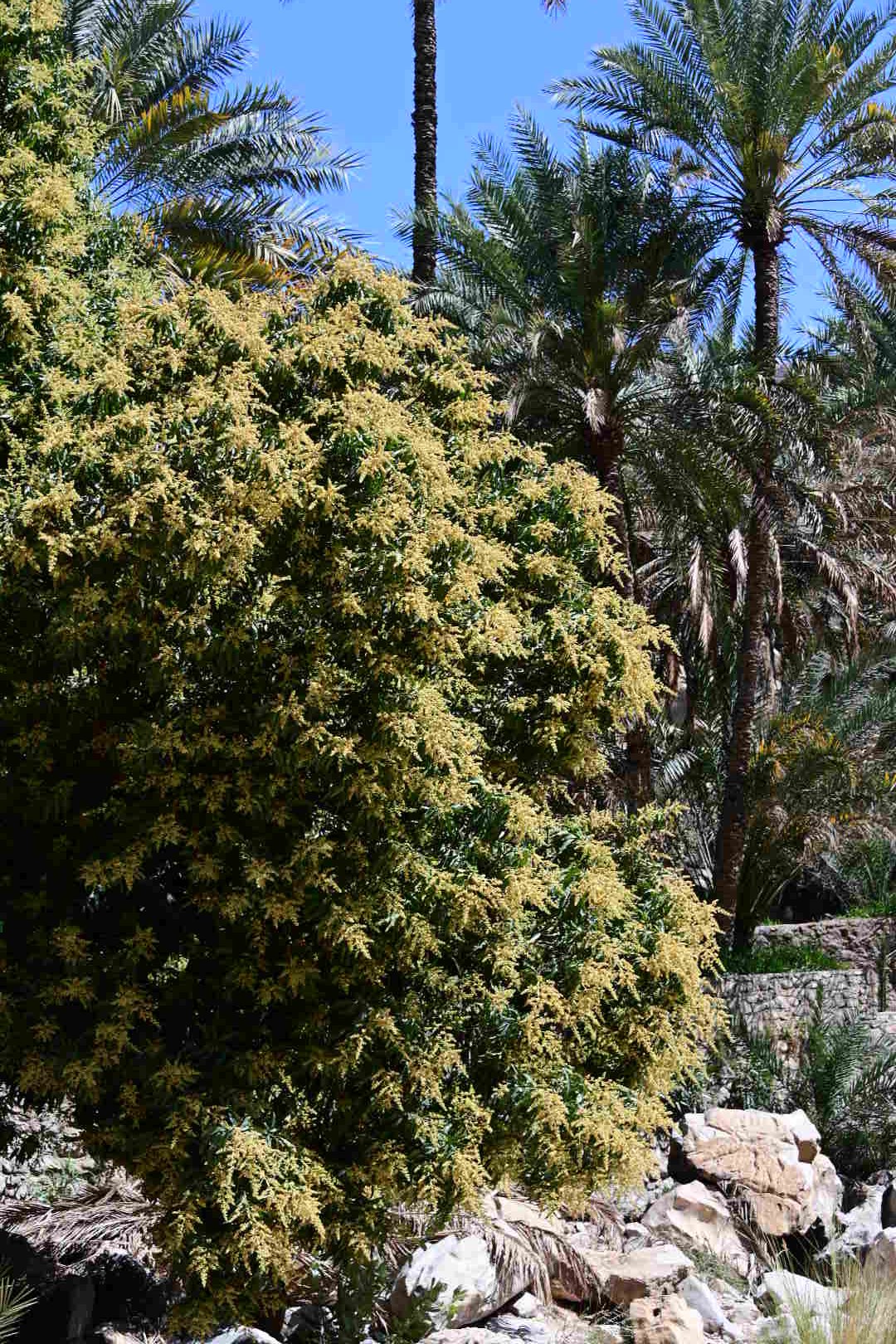 We’d enjoyed Wadi Bani Khaled, but at the same time found it slightly weird to have such (relatively speaking) naked pandering to tourism after all the other, less exploited places we’d visited. As our late neighbour Cyril used to lament, tourism is ruined by tourists, and this was the first inkling we’d really had about the encroaching effects of tourism in Oman. It’s an important industry, and the country needs to develop and grow it; but the downside is that nature will get built upon. Let’s hope that the Omani government will try to ensure that tourism development is done in the best possible taste.

Lunch was as usual an excellent picnic courtesy of our Hud Hud chef. After that, we headed back into the desert. En route, we saw the extent of the date palm plantation outside Biddiyah. The water supply that feeds it means it can spread until it butts up hard against the desert behind it. 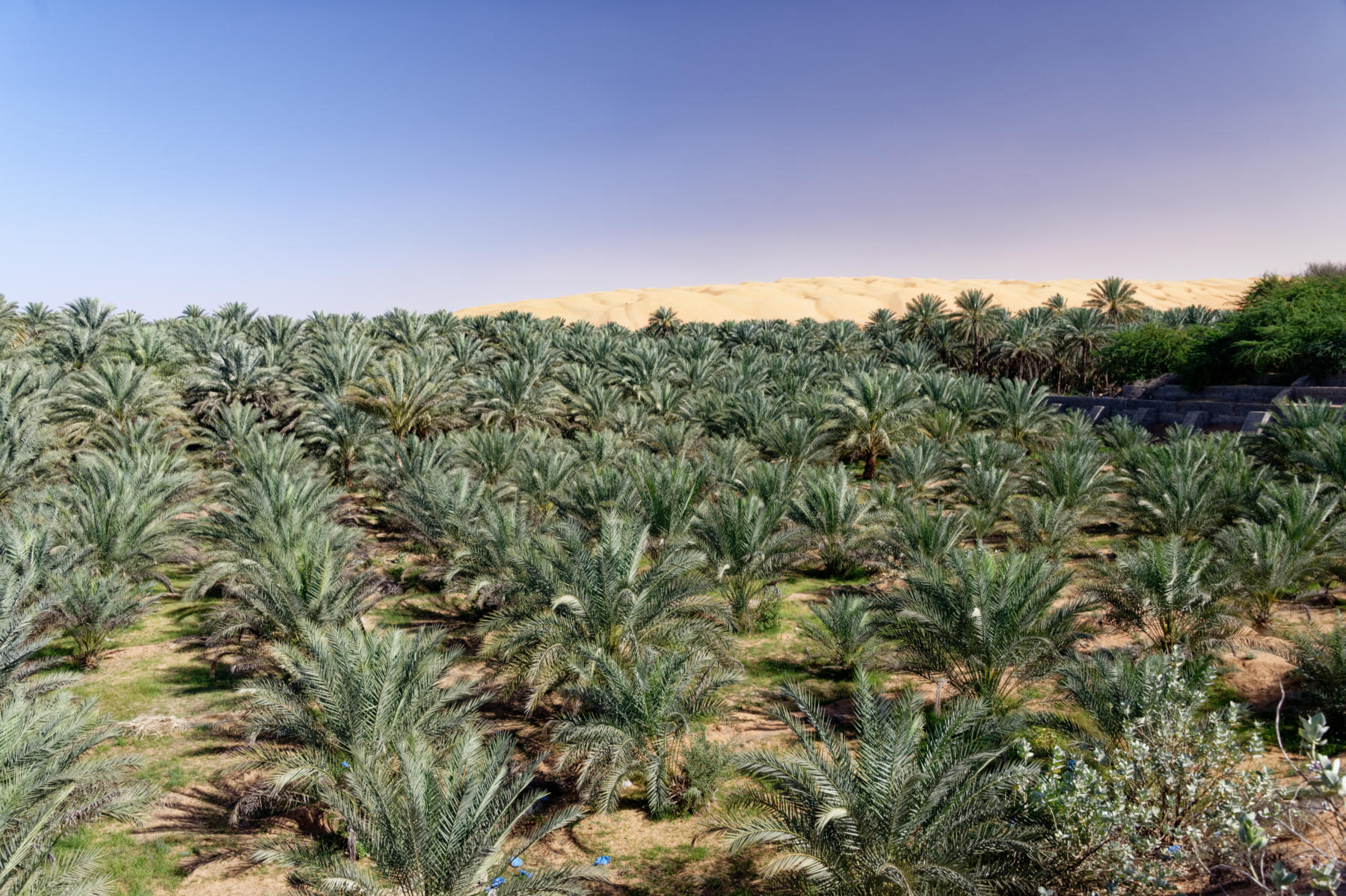 The object of going back into the desert was to visit Said’s gaff to gain a little insight into the bedouin culture. I wasn’t quite sure what to expect, but in the event it turned out to be a sizeable room, constructed in a traditional manner out of date palm trunks, stalks and leaves. That sounds insubstantial, but, as you can see from the picture below, it is a sizeable and robust fabrication. As you can also see from the cars parked outside, we weren’t the only visitors. 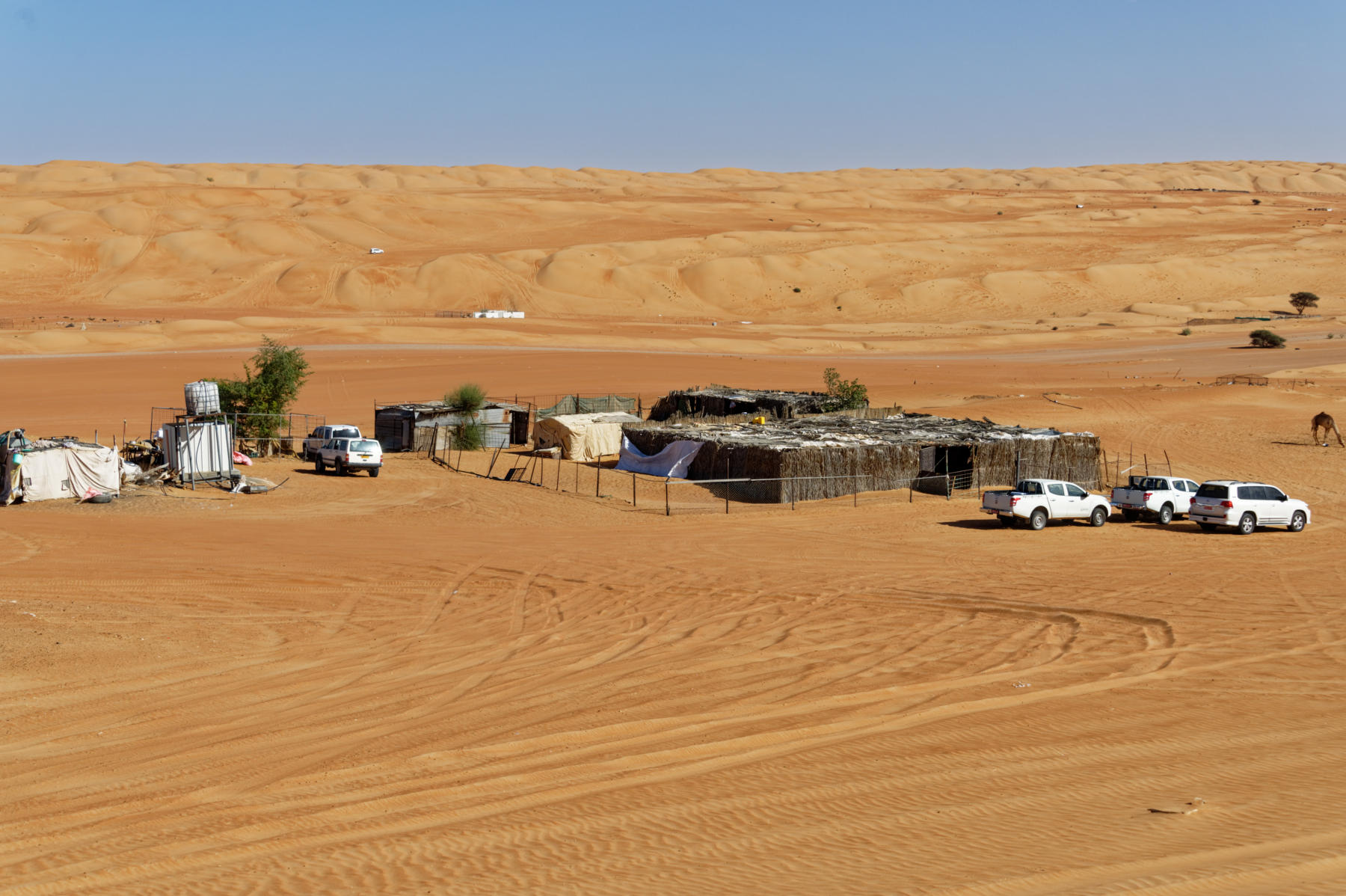 Half of the room is given over to carpets upon which coffee and dates are served to seated groups of visitors. 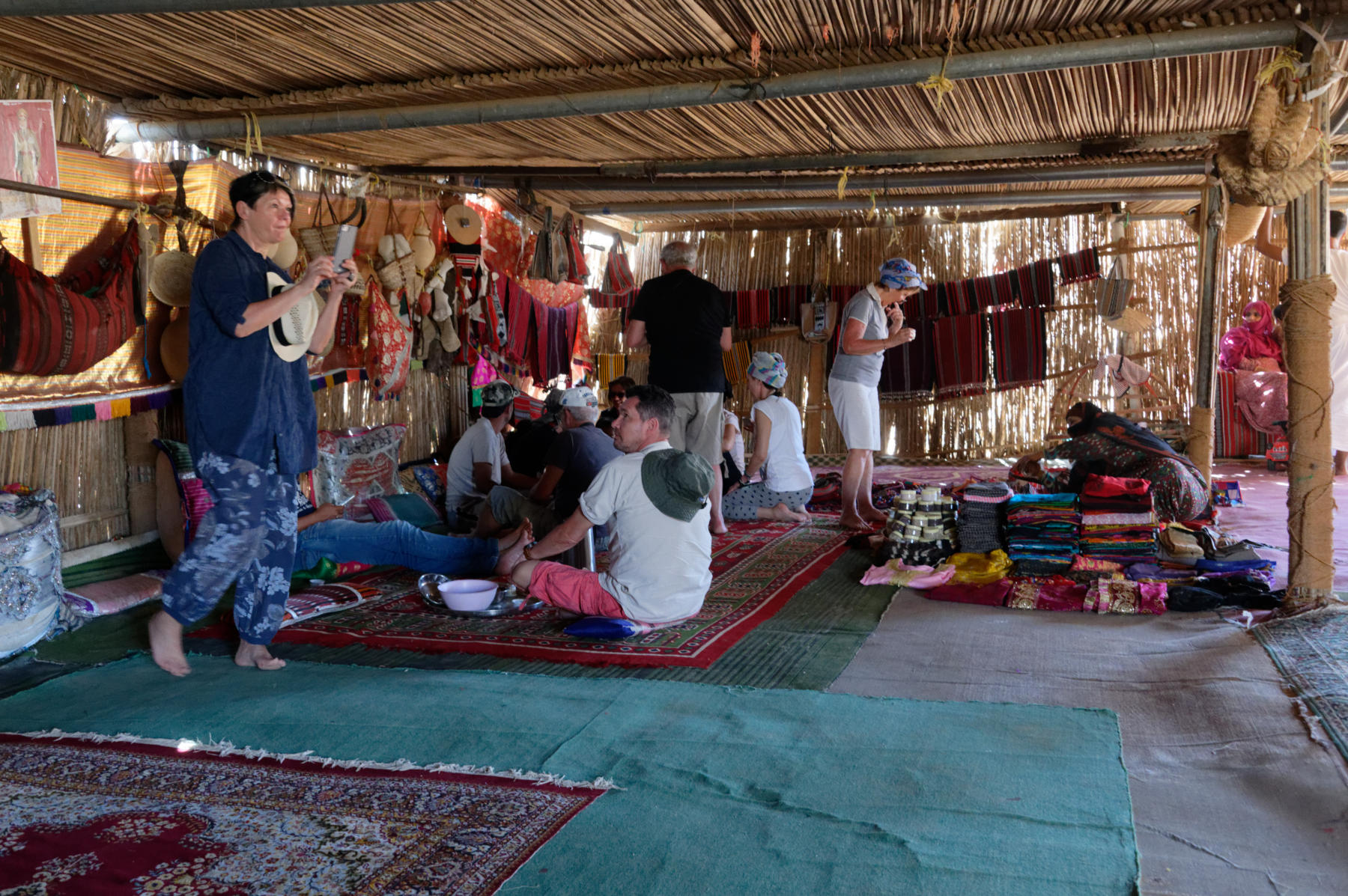 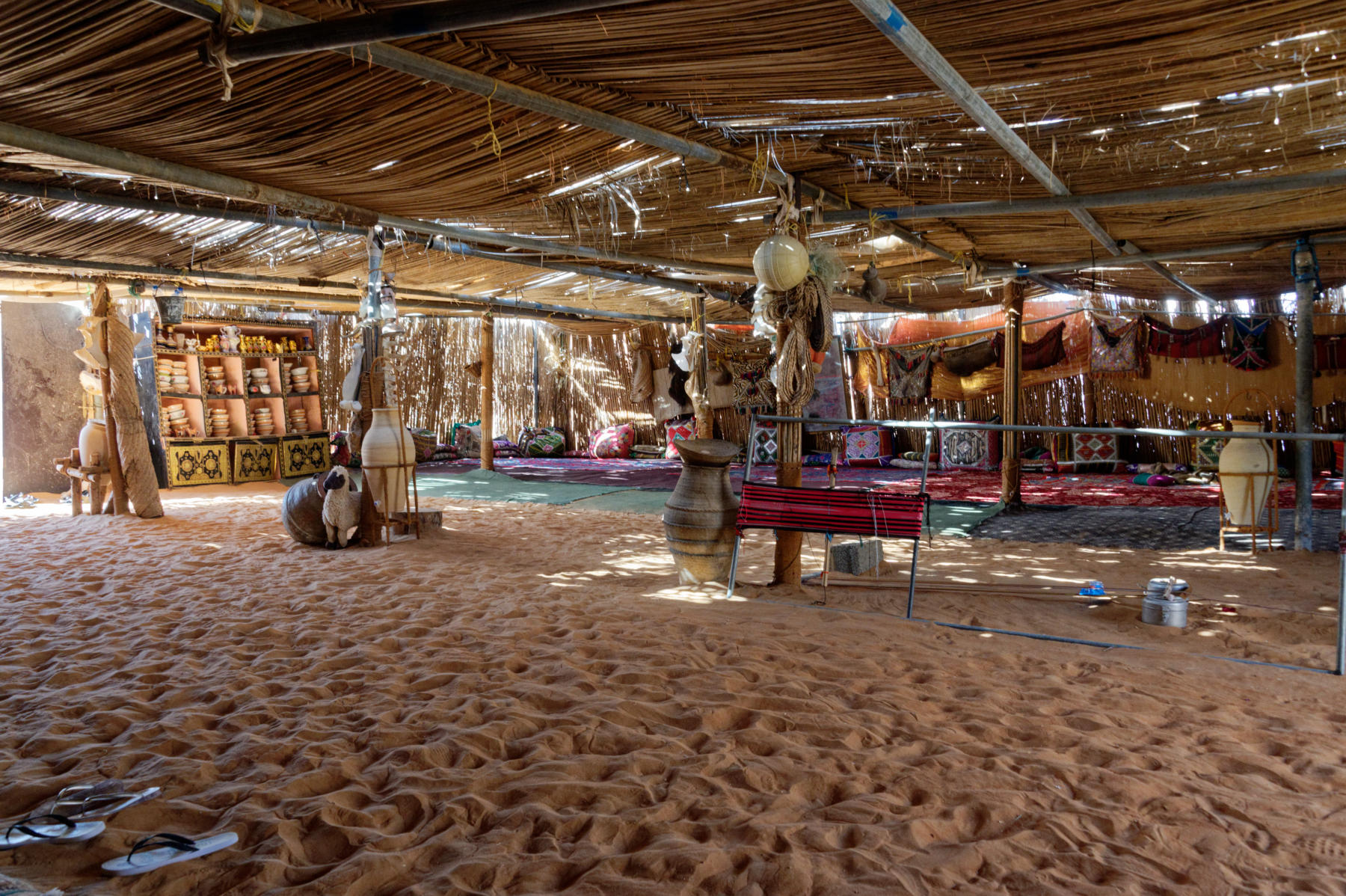 To give you an idea of the construction, here are close-ups of the ceiling 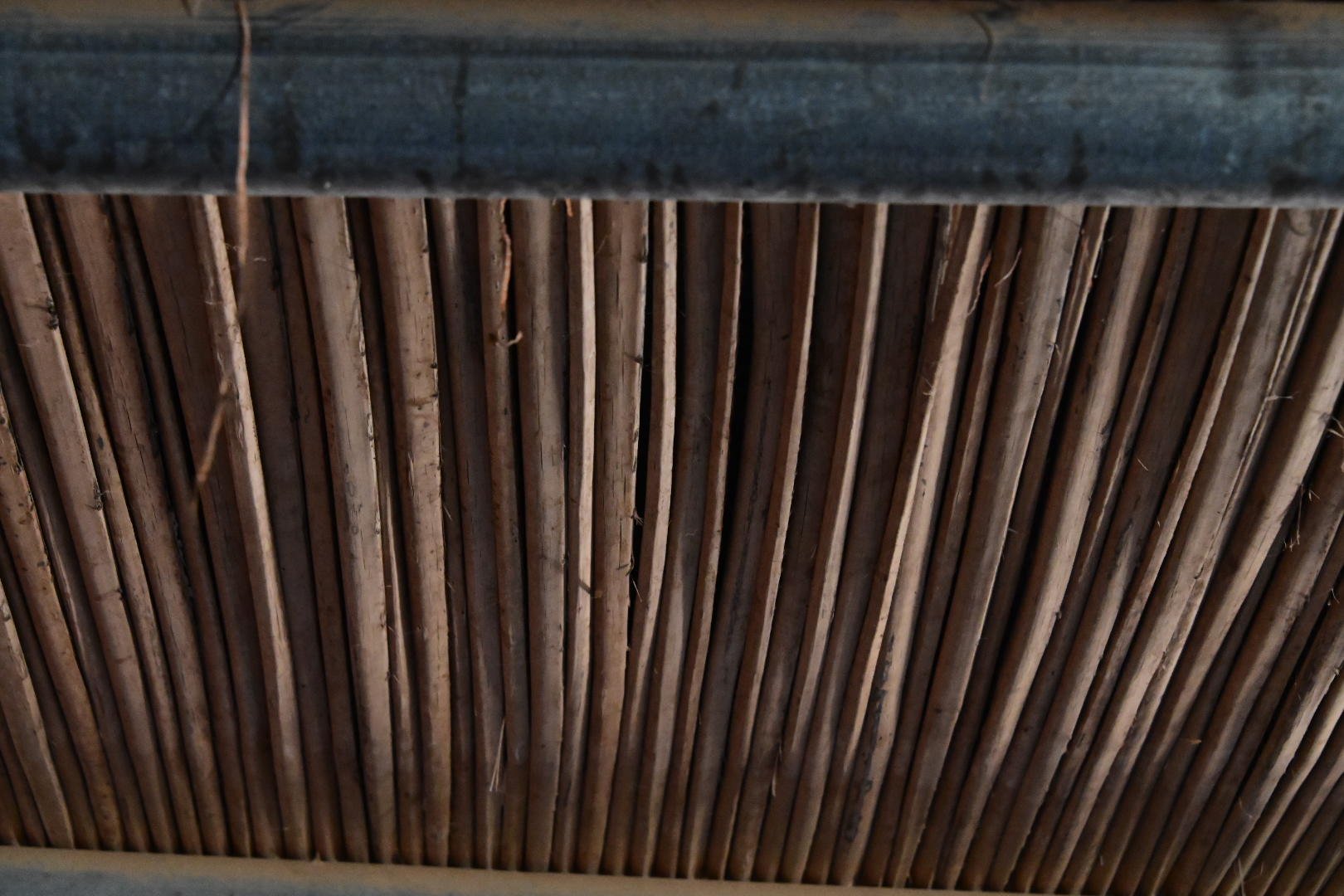 which is date palm leaf stalks, and the walls 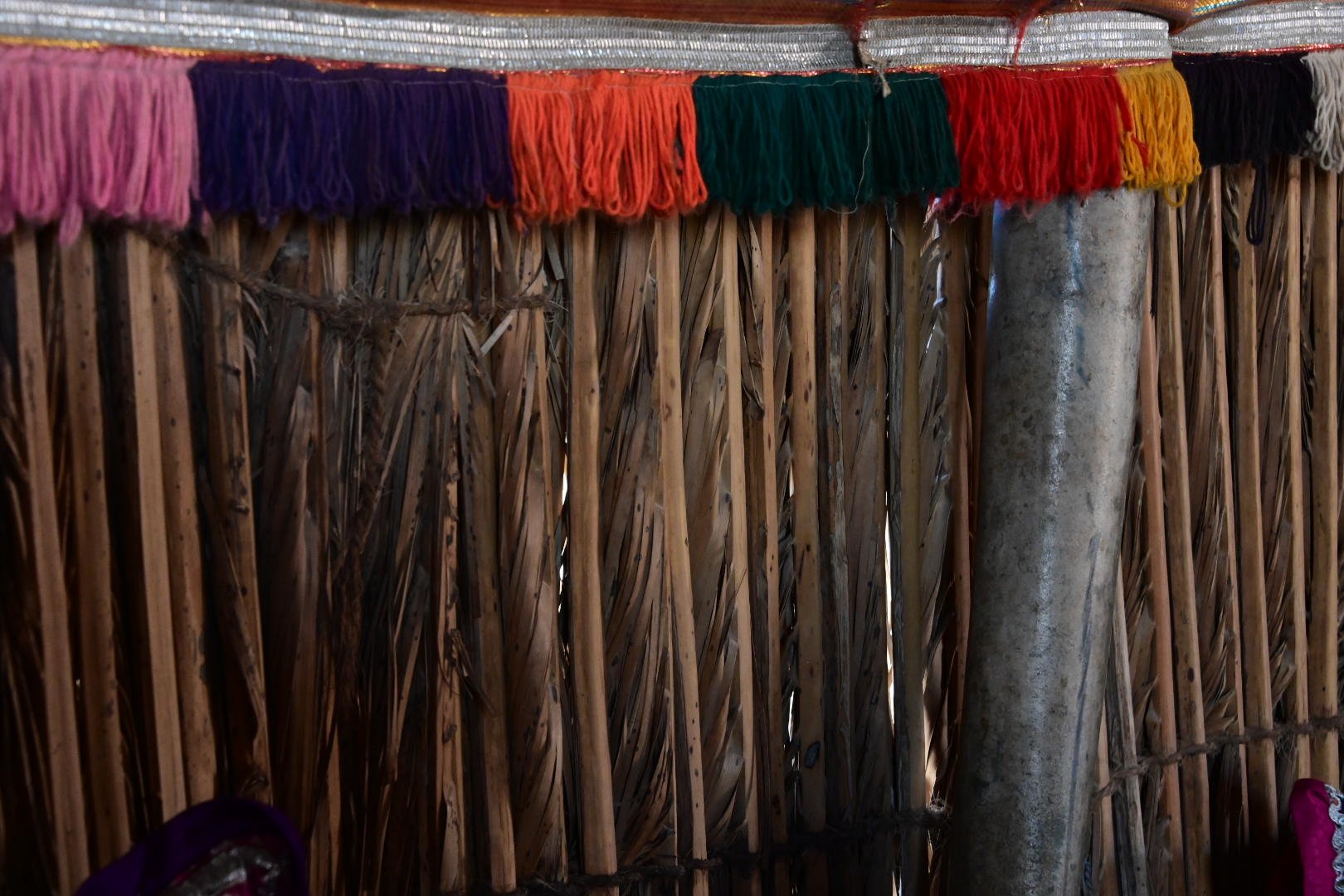 which are also date palm stalks, but with the leaves left on to provide a fibrous surround.

Our stay there was reasonably short, and we headed off back to the Wahiba sands to get back to camp in time for sunset. 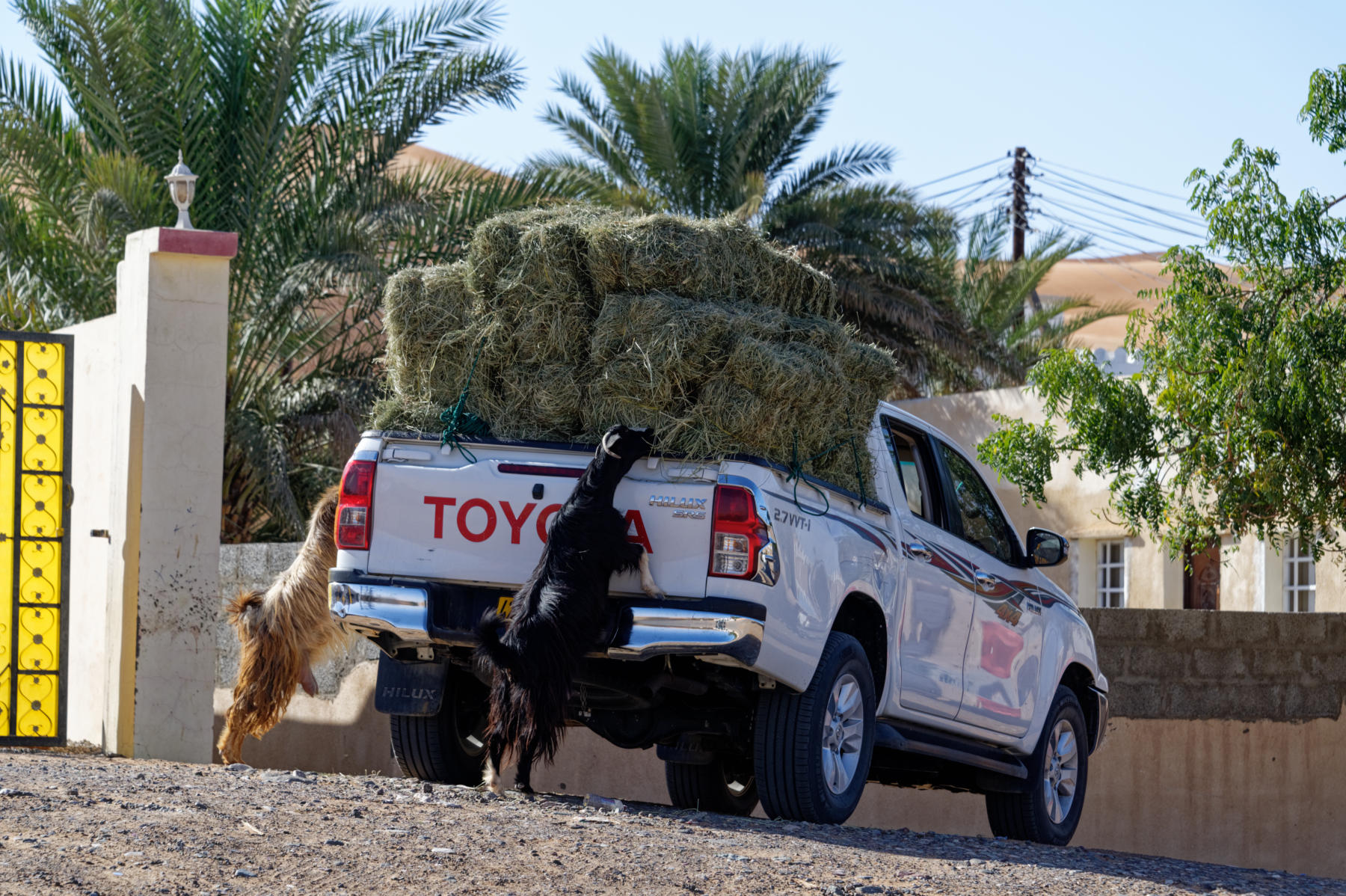 racing camels being taken back to their farms after exercise; 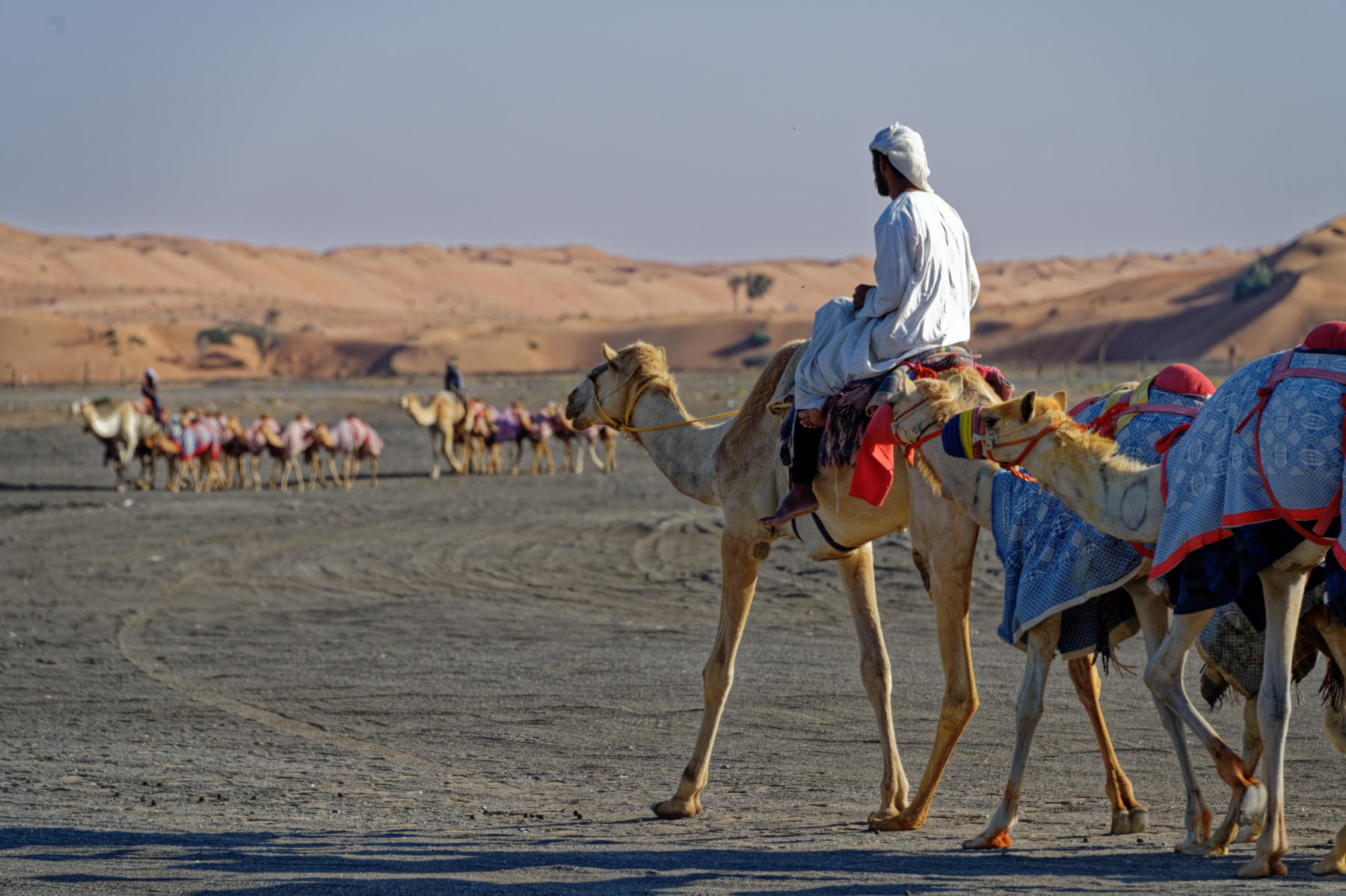 and some more hazards on and off the road (which carries right on towards Muhut until it suddently stops being a road and deposits you onto flat sand, at which point you are on your own – further underlining the need to make sure you’re properly prepared for desert travel). 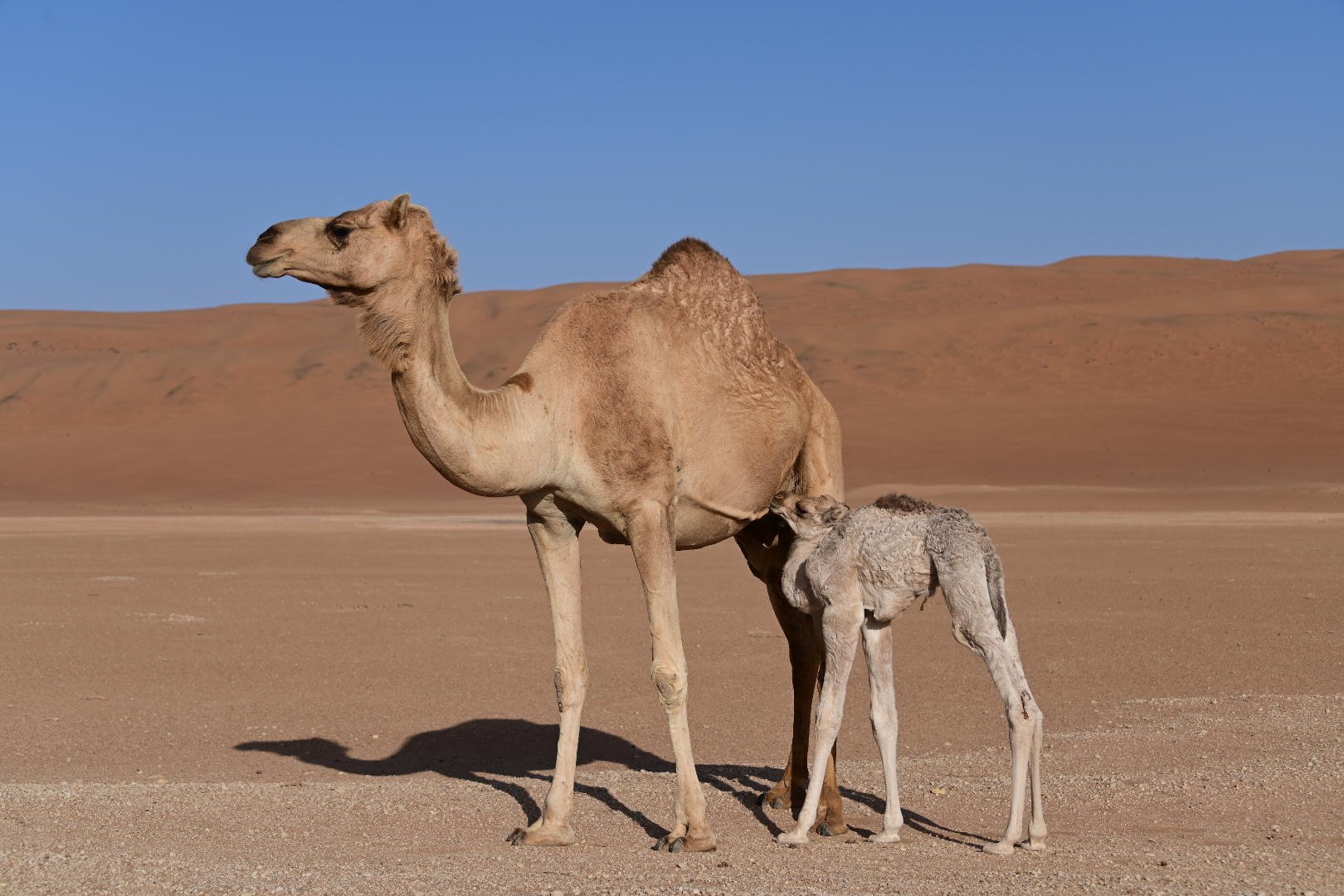 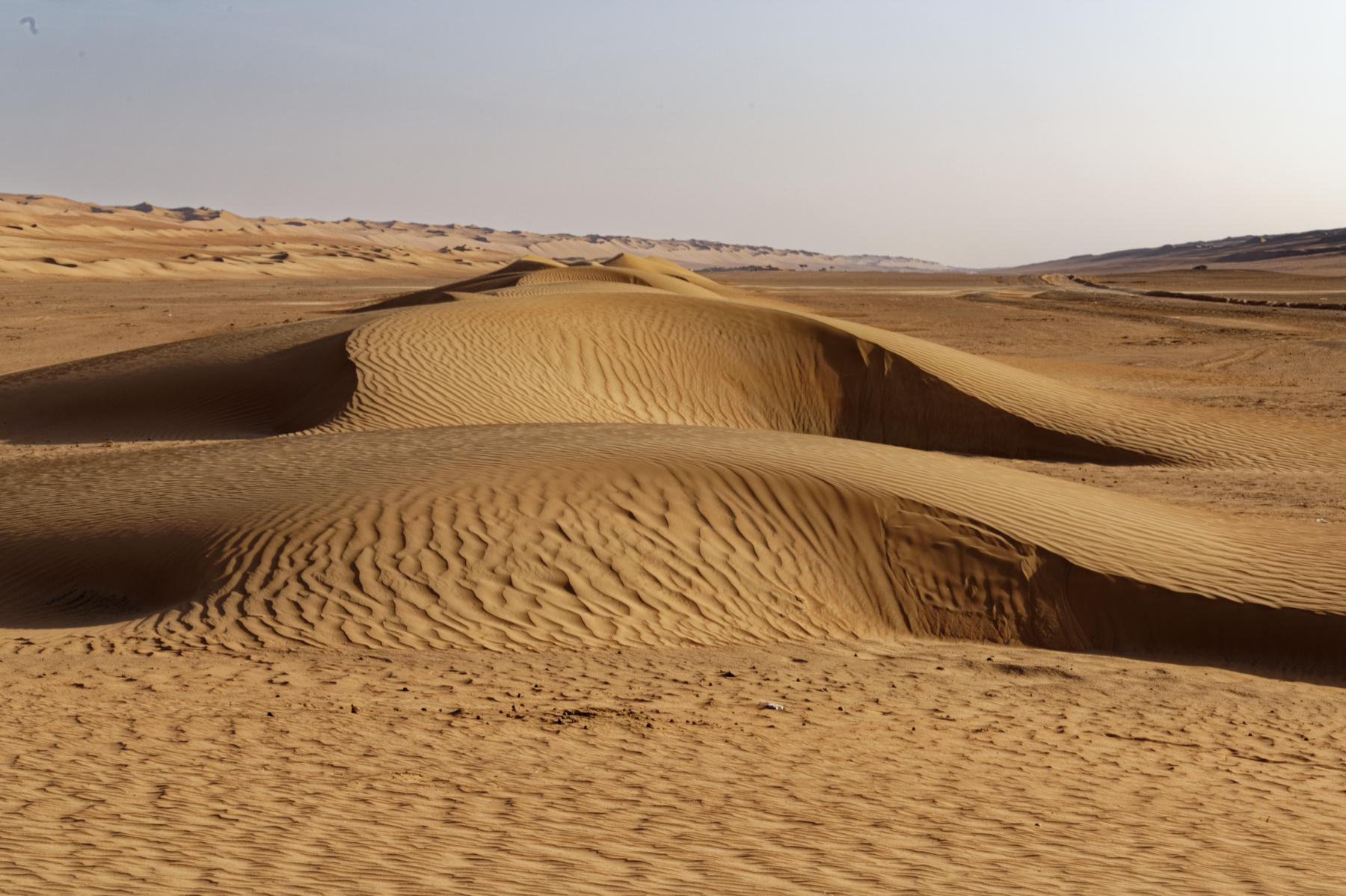 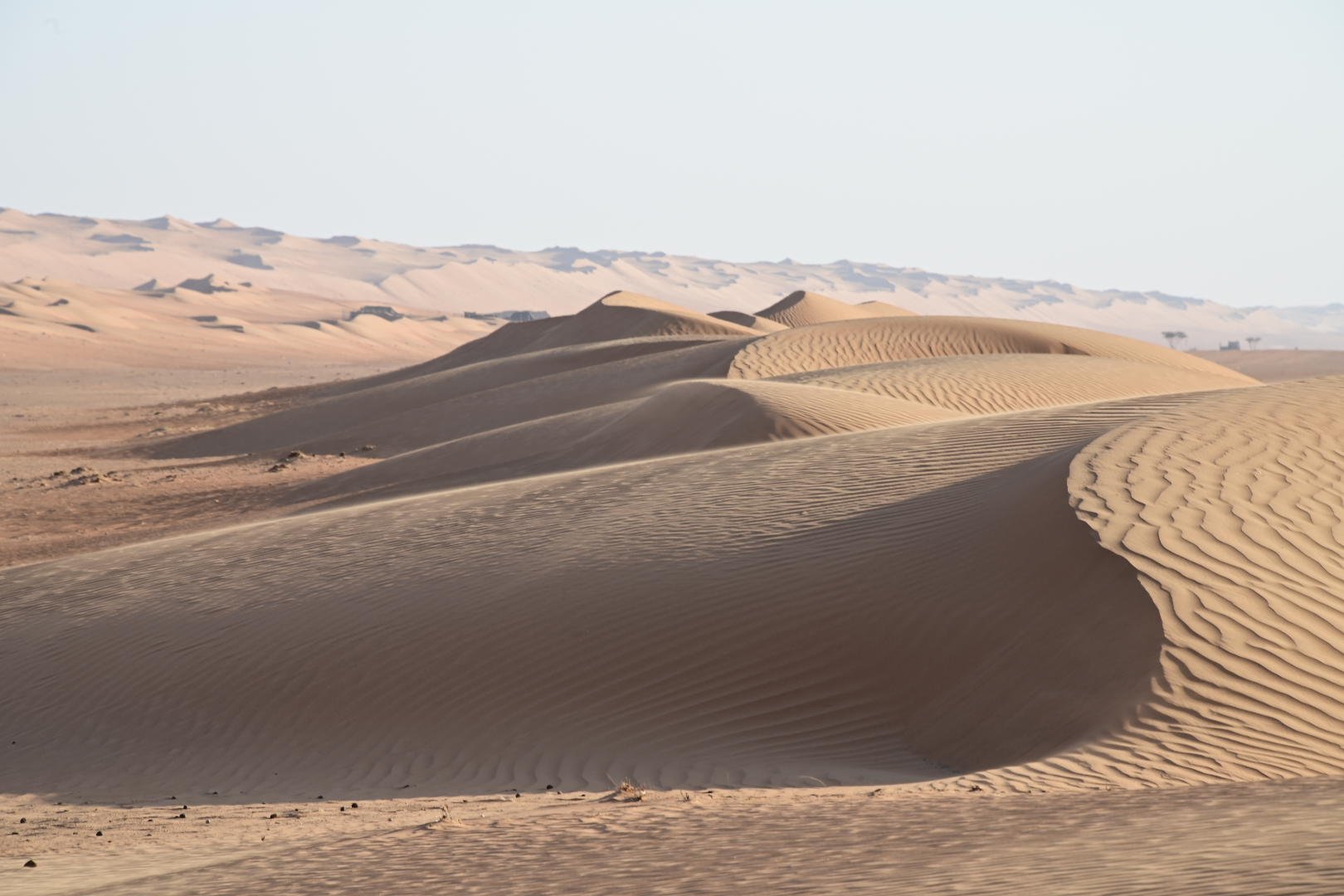 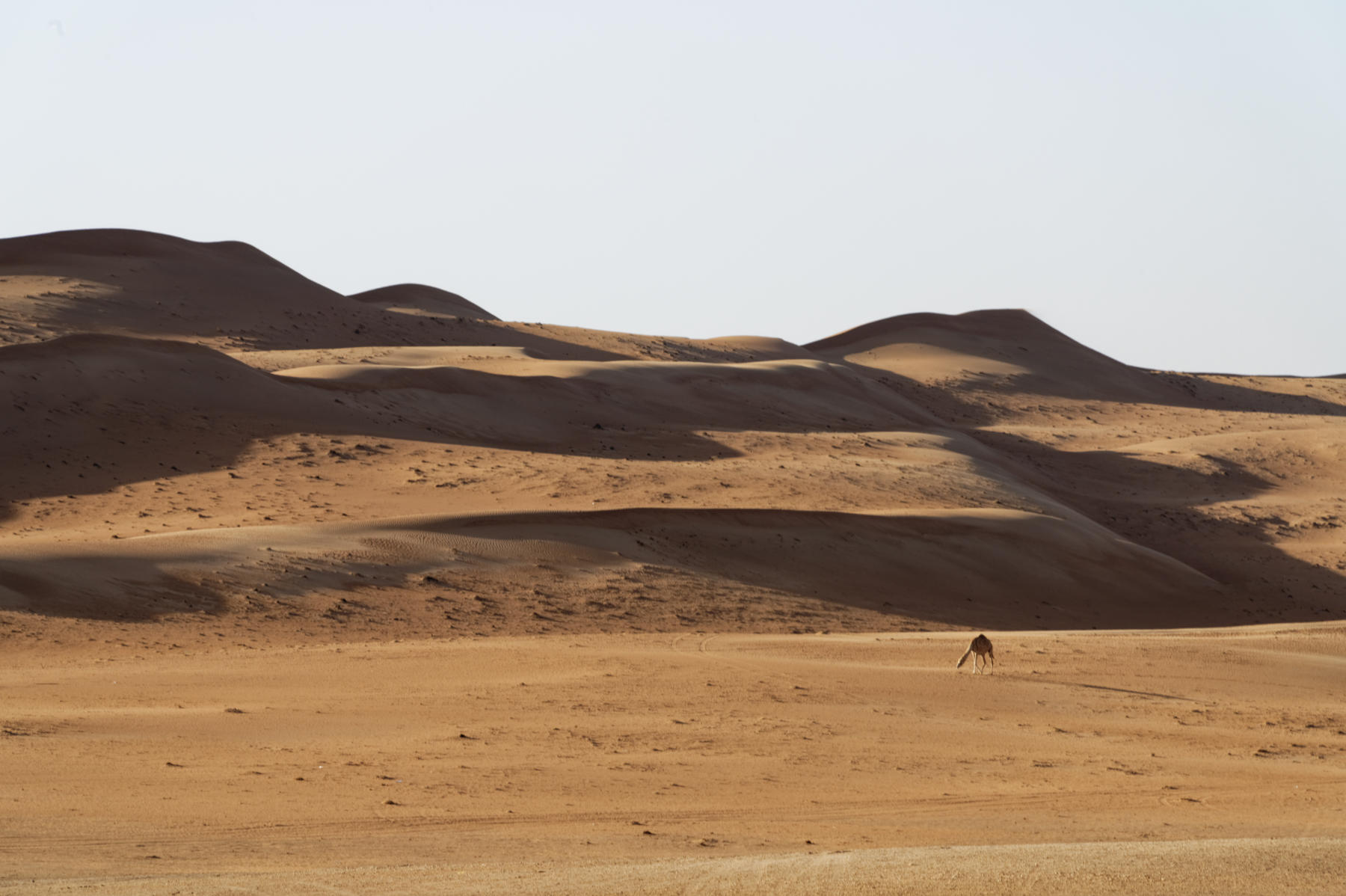 To get to a decent viewpoint for the sunset, we piled into the car (taking an extra member of the camp staff with us to help dig us out in case we got stuck on a dune somewhere) and Rashid took us dune-bashing via a circuitous route to the top of a dune overlooking a valley and served coffee whilst we awaited sunset. 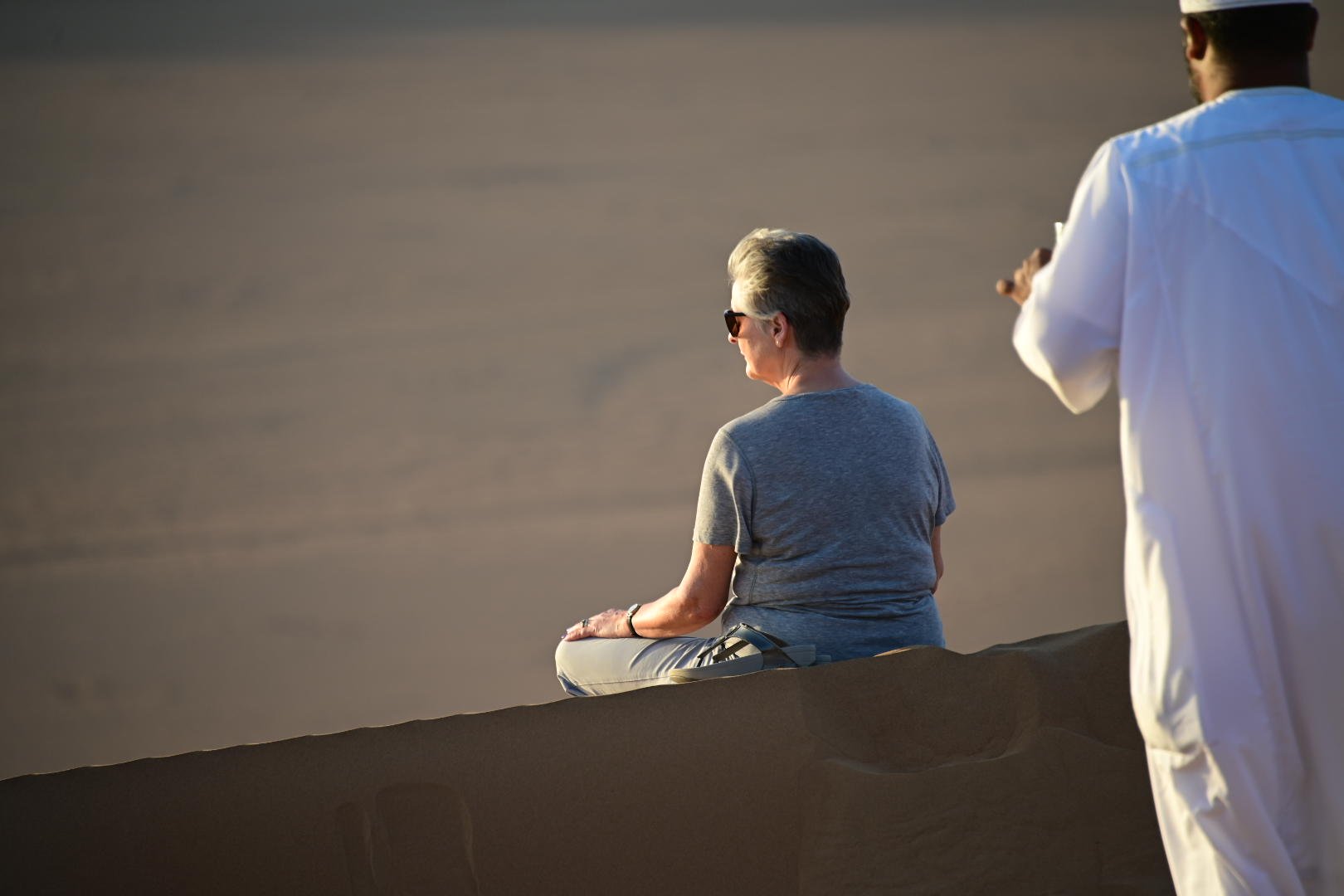 The sunset itself wasn’t particularly spectacular, but the location was very zen. 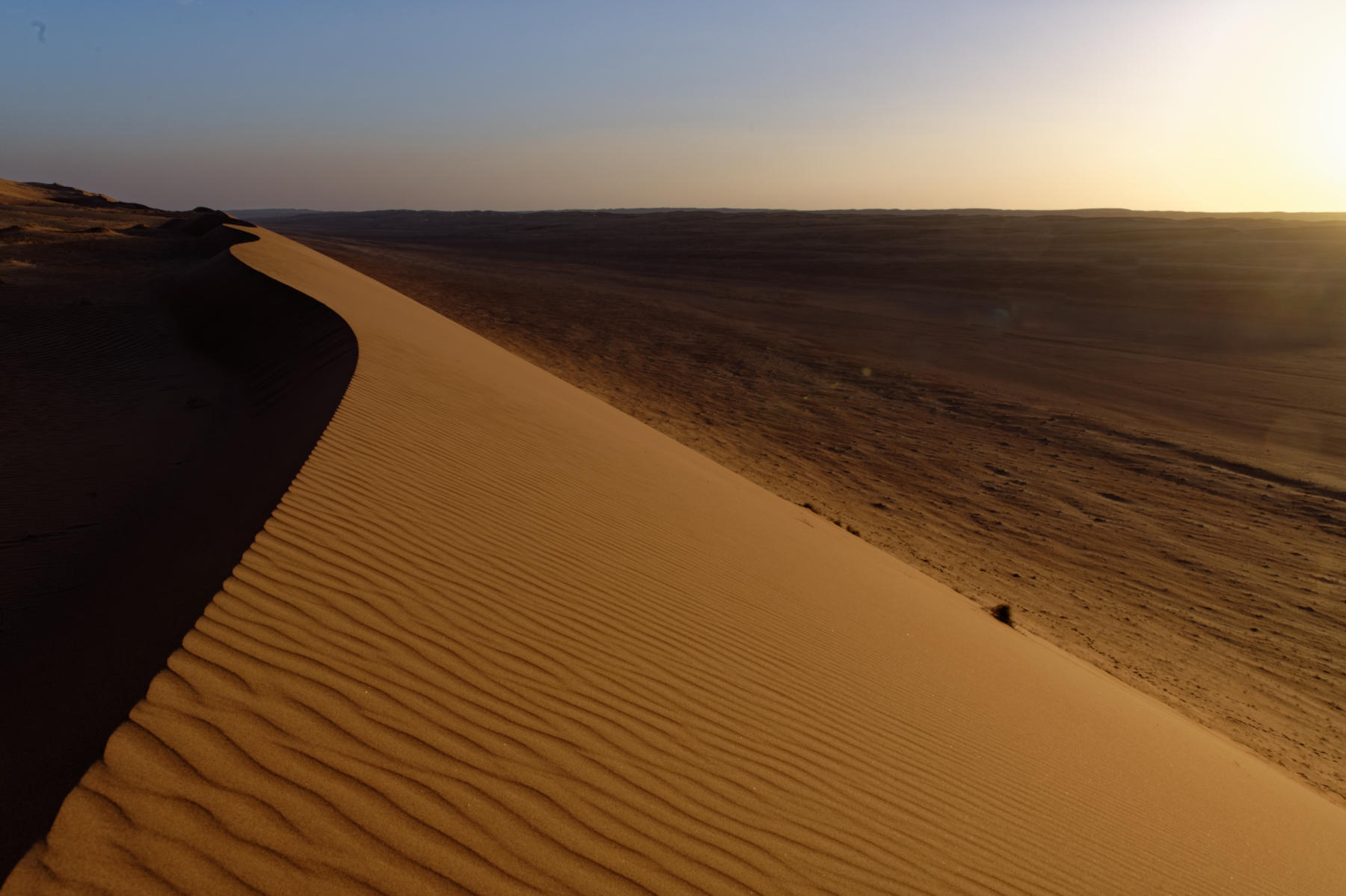 When we got back to camp, we had the usual excellent dinner and, while Patrick and Jane went off to hunt more scorpions, I set to to trying to get some images of the stars. I got some stills which were rather ho-hum, and then set a timelapse going. Again, it’s nothing too dramatic, but it looks like some aeroplanes came through, (I originally thought they might be shooting stars, but I now doubt that):

After all that excitement, since we were due to leave camp the following morning, there was nothing for it but to try to finish off the gin we’d bought on arrival in Oman. Patrick manfully stepped up to the plate to help us out and by hook or by crook we finished it off with just about time for a reasonable amount of sleep before having to face the next day, which is, of course, covered in the next gripping installment of this blog, where I hope we’ll meet again.