28th September. The bura wind, although it only actually blew strongly on one day, had a considerable impact on the overall itinerary for the week, right from the start:

So, Trogir it was. The above goes to show how uncertain things can be when cruising the Adriatic, and I commend Filip and the crew of Perla for thinking ahead, planning accordingly, and being flexible enough still to make the programme for the week interesting, entertaining and varied.

The journey to Trogir was short, so we tied up once again to a handy piece of rock that was in the environs so that those who wished could go for a swim.

Then, because we couldn’t tie up near to Trogir’s old town island, we made our way to Trogir marina, which is (at least to my inexperienced eyes) absolutely vast and really emphasises the importance of yachting, sailing and cruising as an activity in the Adriatic – more on this later.

From the marina, we took a water taxi towards the old town. I was hoping to get a great photo of it from the water, but it’s not easy; the most striking feature is a fortress at the edge of the town 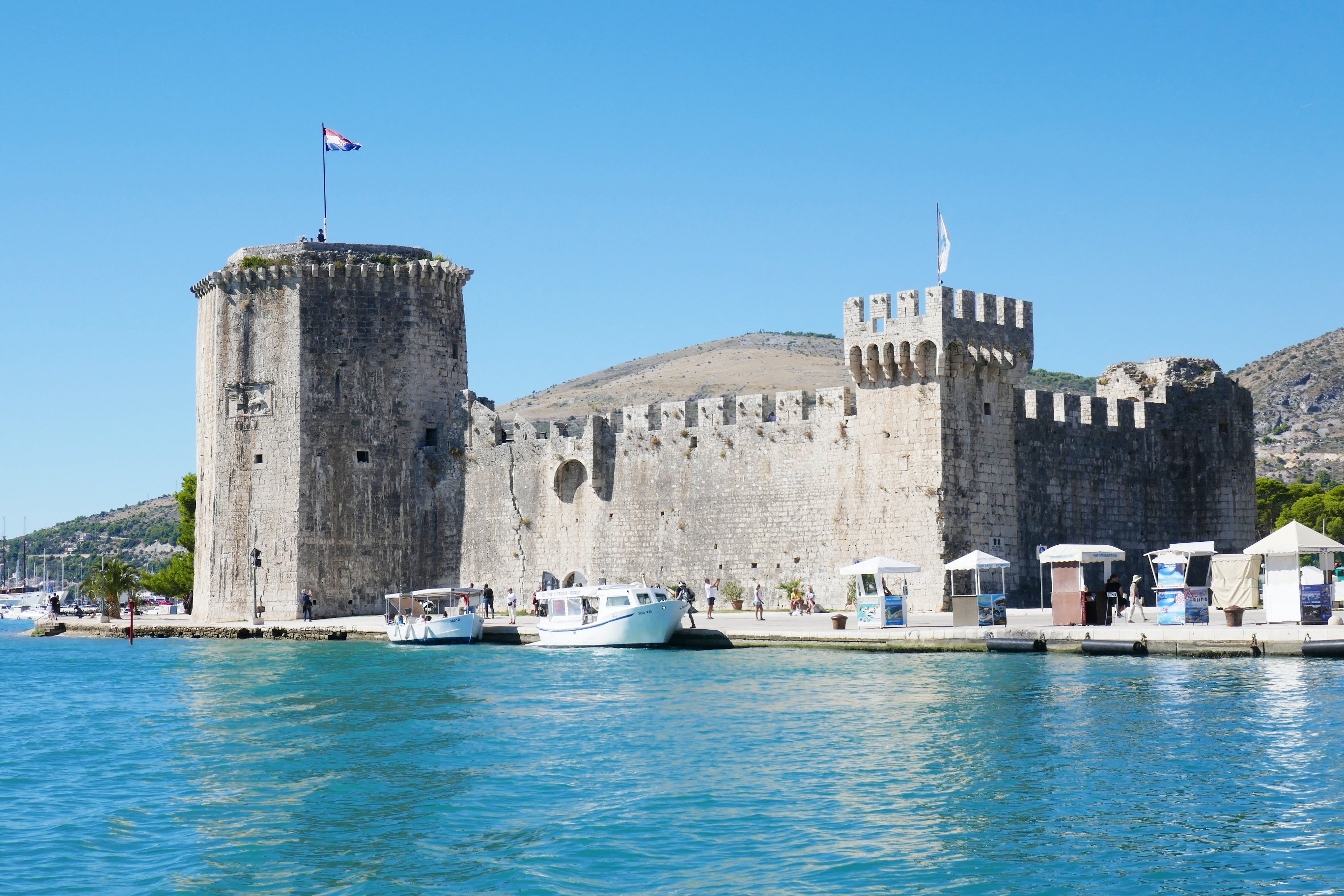 and you’ll be able to see the view from the top if you just control your impatience and read on. You do get a sense of the character of the old town from the water 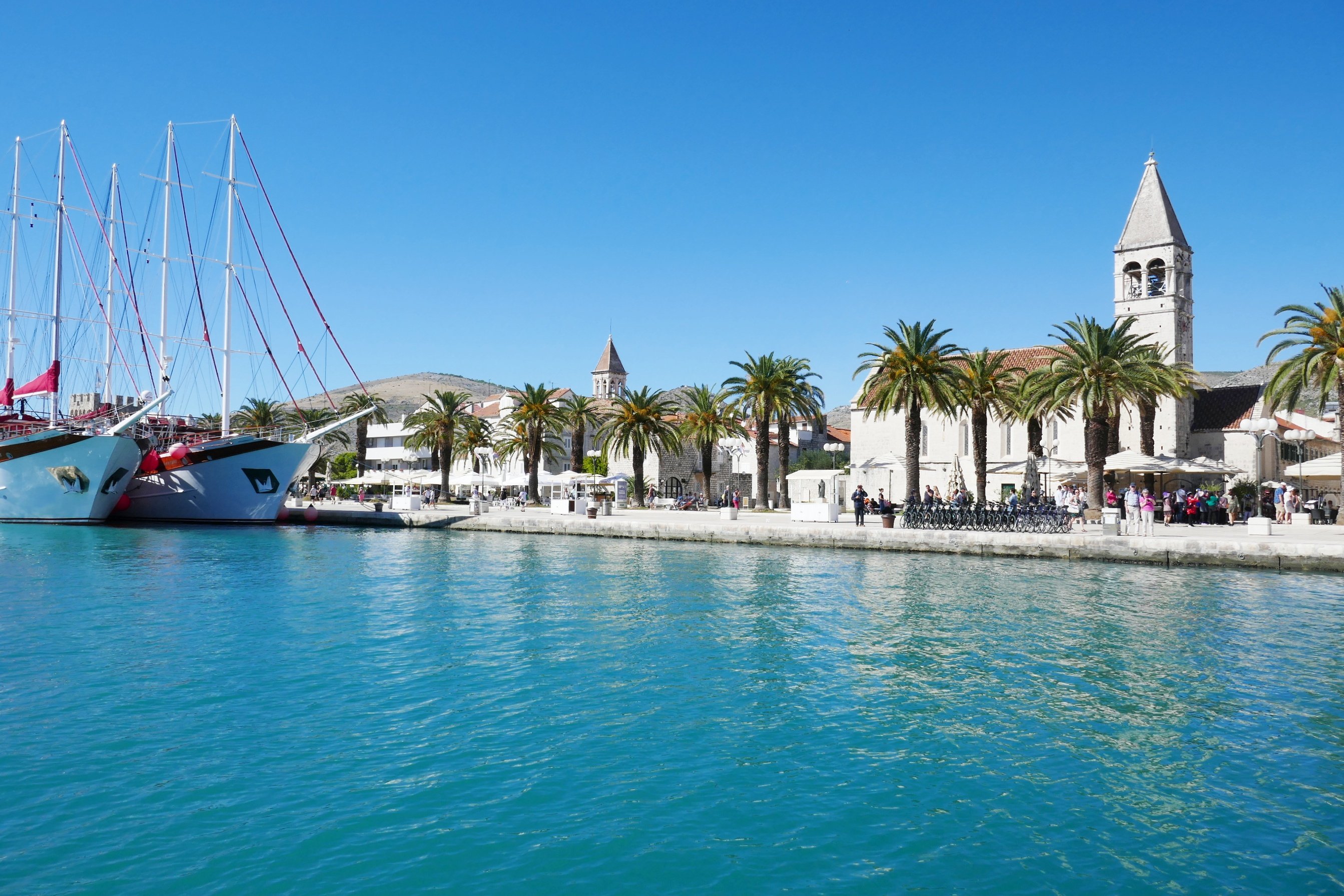 and, if you look to the left, a small idea of the sheer number of visiting (small) cruisers – again, more on this later.

Our guide for the day was Igor (supplemented, as ever, by the energy, enthusiasm and knowledge of Filip) and he conducted us into the old town, taking us past charming alleyways 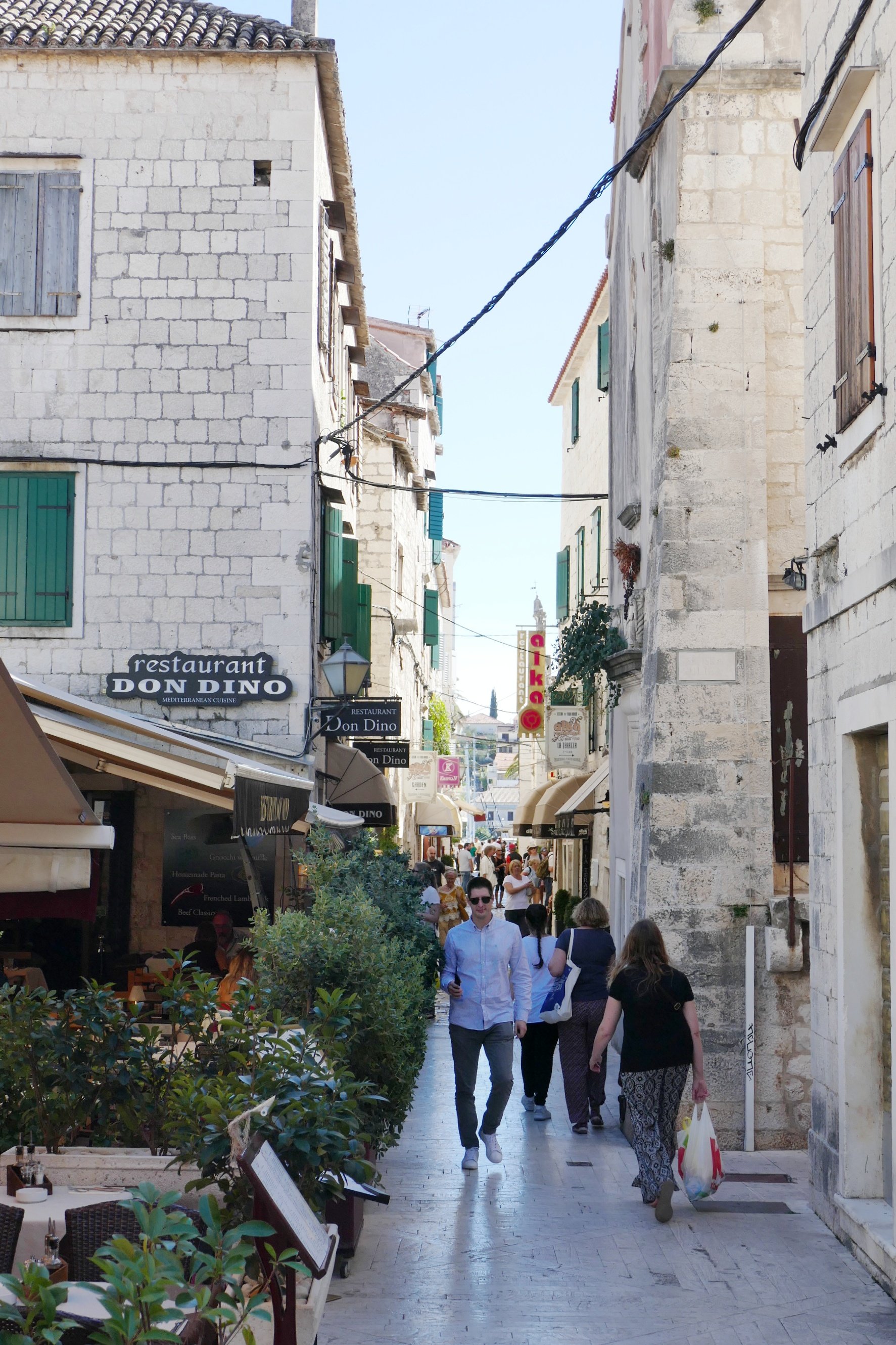 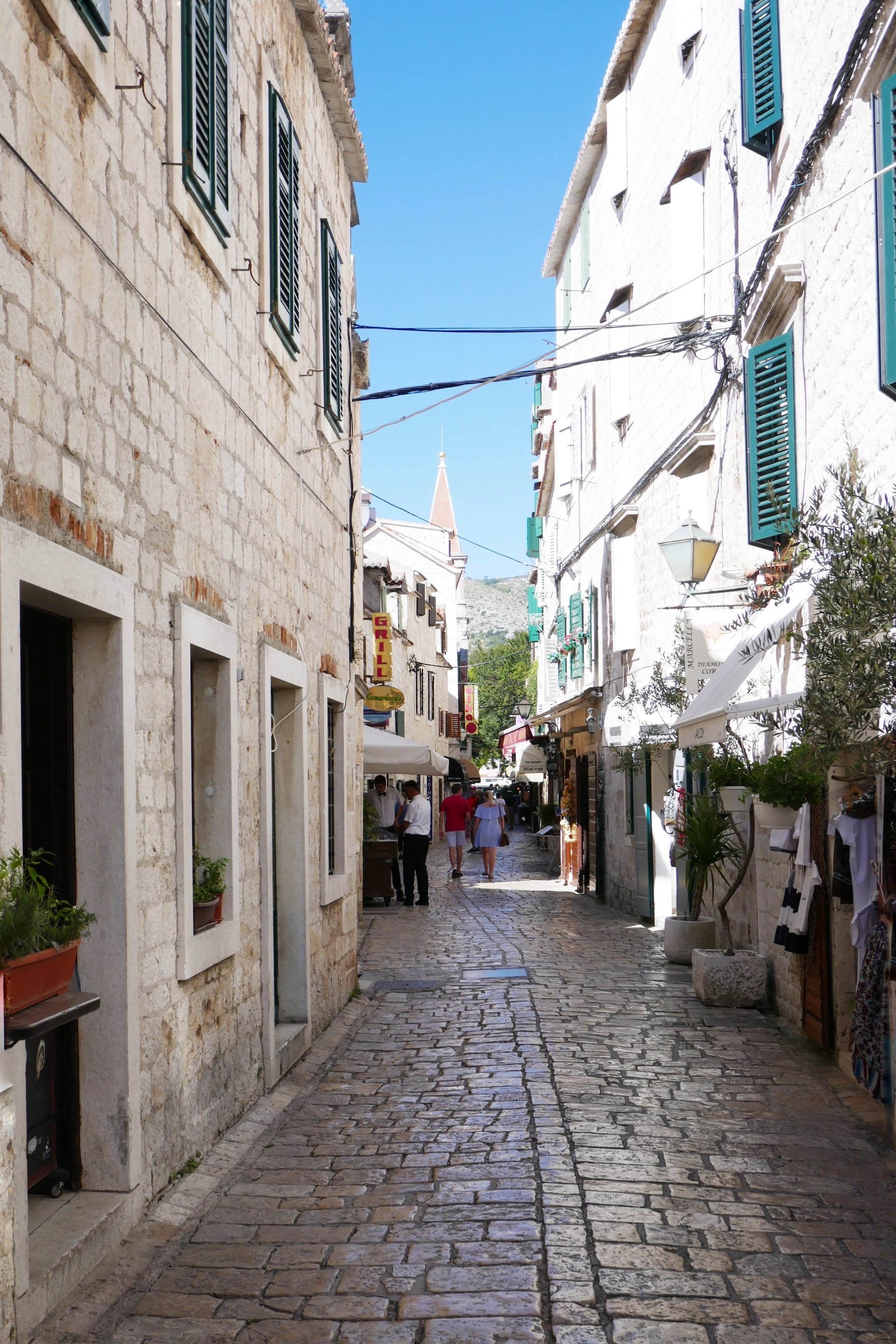 to the central square. Like most space in the old town, it was full of cafes and umbrellas, so difficult to capture as a photo. It features a loggia which was being used to showcase another group of Klapa singers (I got a very short snippet of a similar group in Split). So, here’s a longer video of this lovely a capella style of singing.

As well as the general charm of the place, there are some interesting things to occupy the historically-interested tourist. There’s a museum which has a lovely courtyard 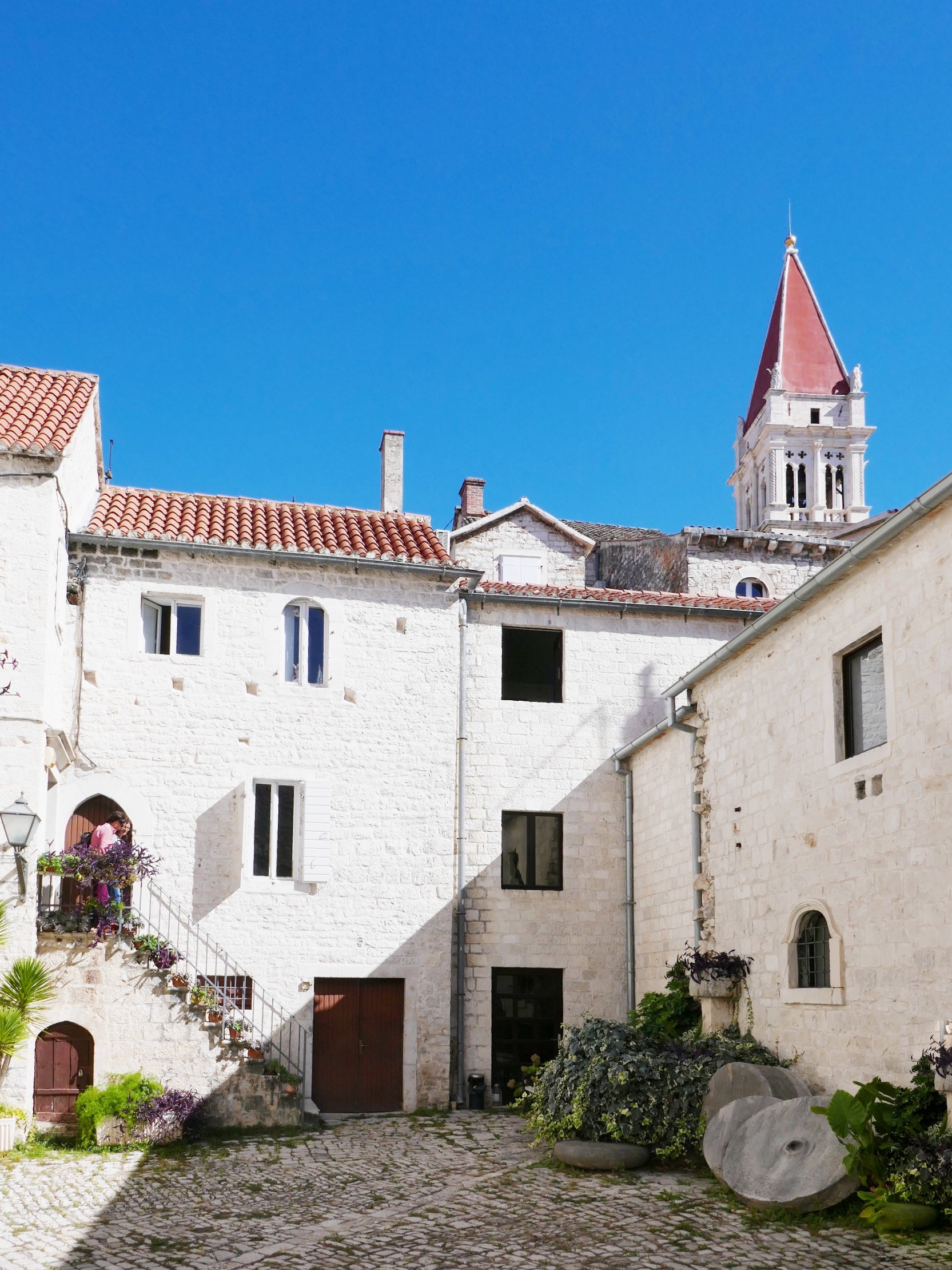 and which enabled Filip to wax lyrical about some of the archaeological and historical aspects of the town. Frankly, it was a level of detail that was too much for my limited attention span, so I took the opportunity to have a short kip when I found a nearby chair. From a photographic point of view, the only item that I found really interesting was the ceiling in the library they have there, the Garagnin – Fanfogna library. 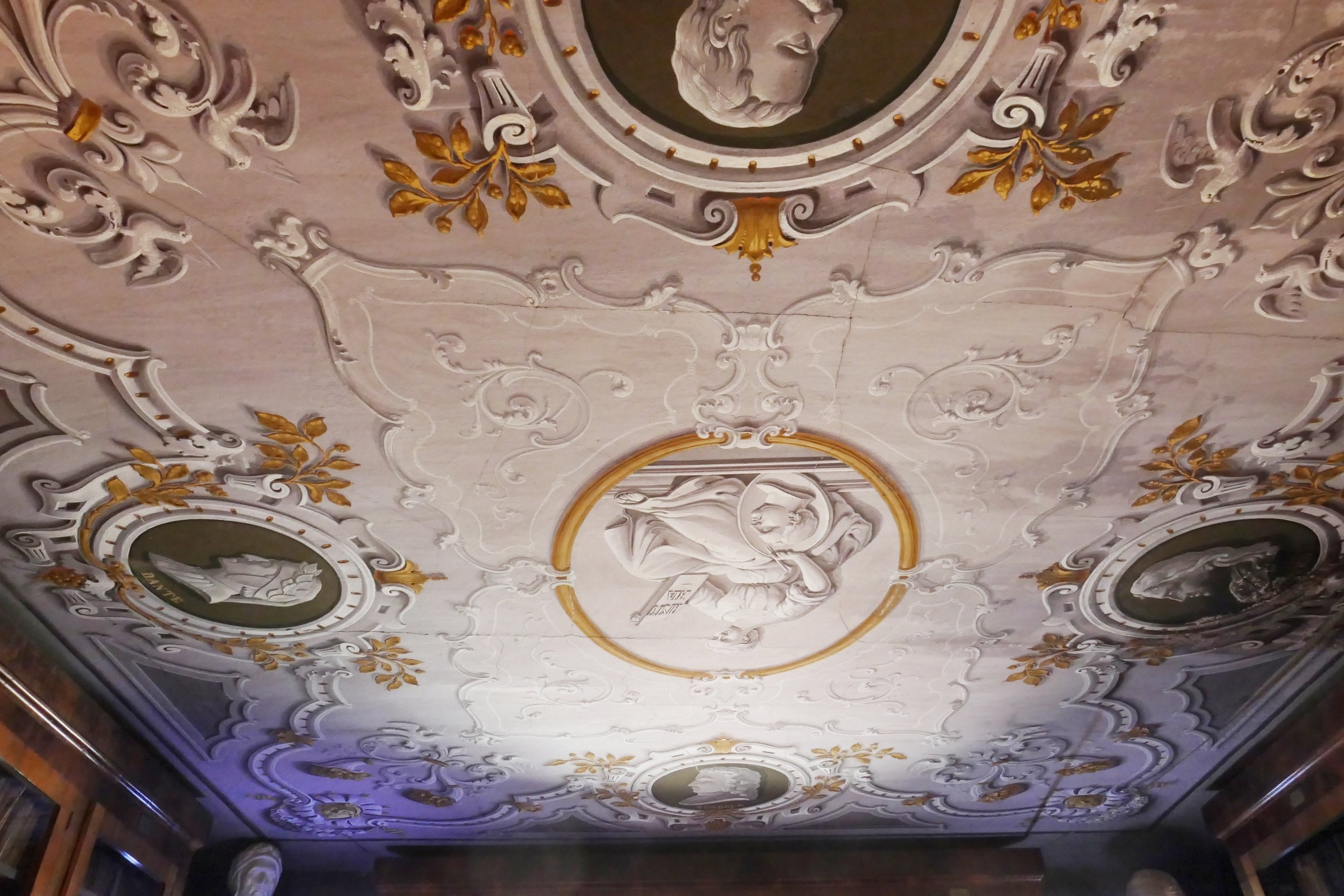 After the museum, Igor and Filip took us to the Benedictine convent of St. Nicholas, which has in it something whose historical and archaeological pith and moment had Filip at his most rapturous. It is a bas-relief which dates right back to the beginning of the 3rd century BC. It depicts Kairos, son of Zeus, and God of the Fleeting Moment. 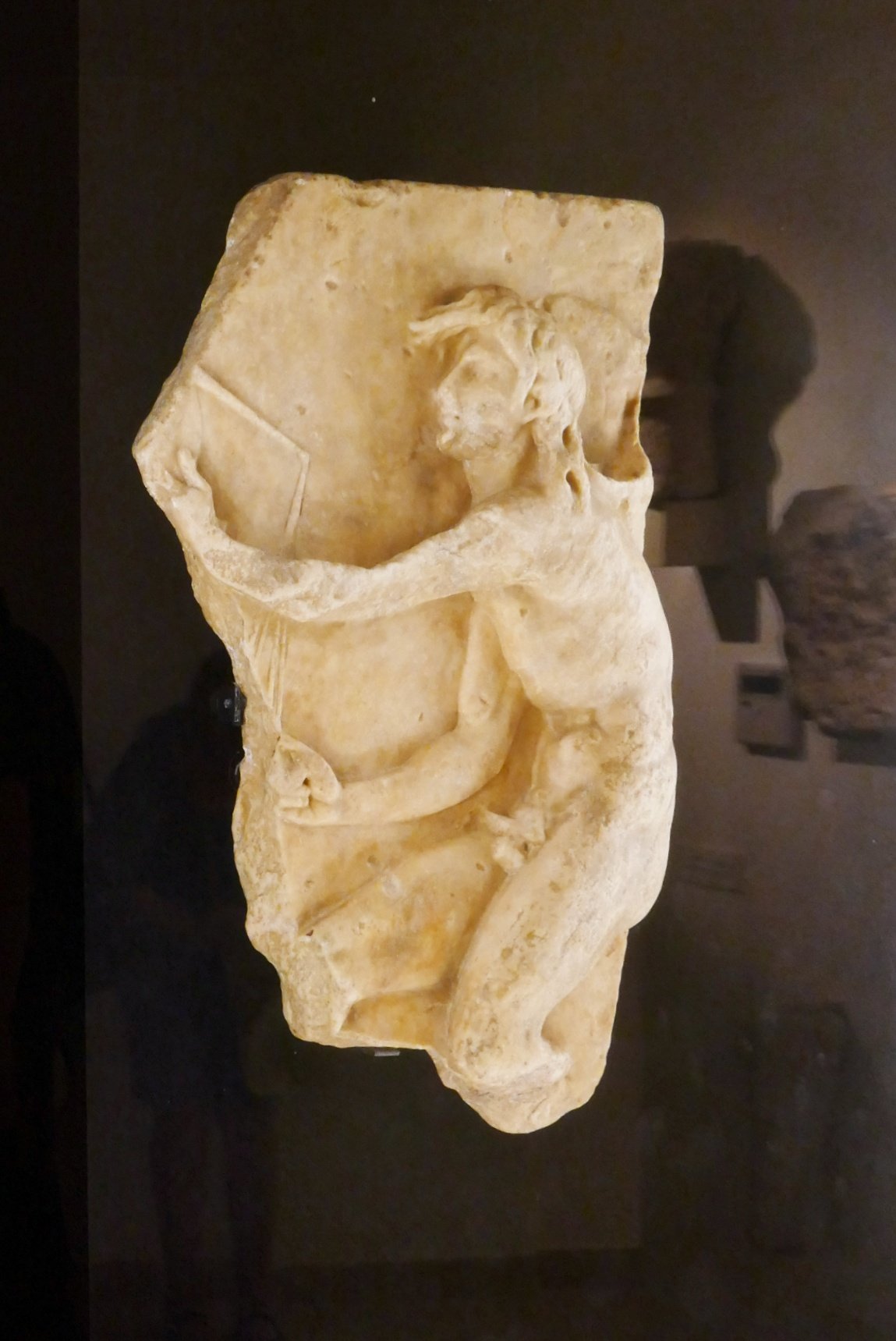 This bas-relief was almost certainly modelled on a bronze statue of Kairos made by the (apparently) famous Greek sculptor Lysippos from Sikyon.

Kairos is permanently running or flying, and hence the favourable opportunity (his tuft of hair) must be grasped swiftly, otherwise he has passed you by, and all you can see is the bald back of his head. 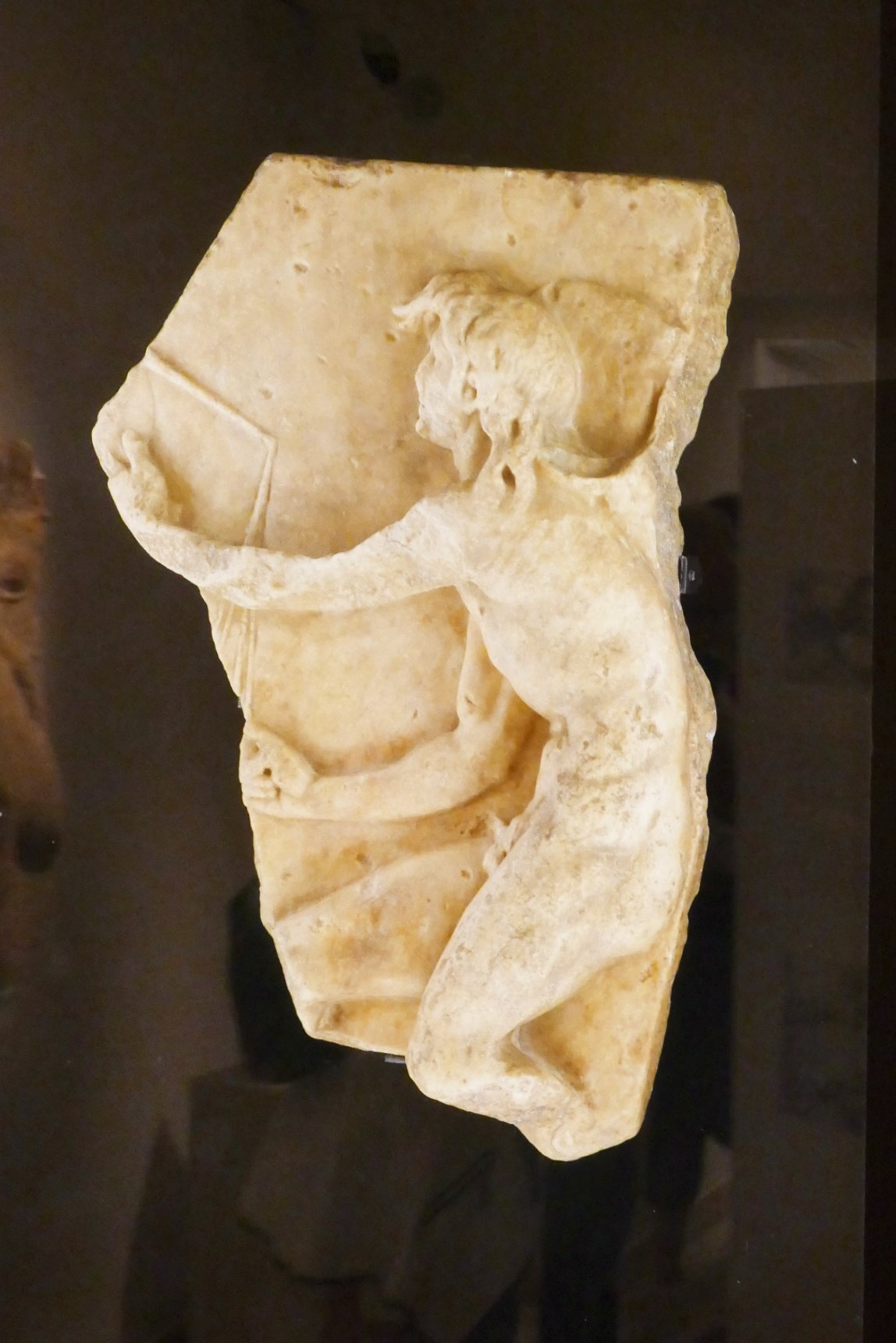 After all of this culture, the only thing for it was to take coffee in the cathedral square, after which we visited the cathedral itself. It’s not particularly large or impressive in and of itself, but it has a couple of items of note. The carving of the choir stalls is very detailed and intricate. 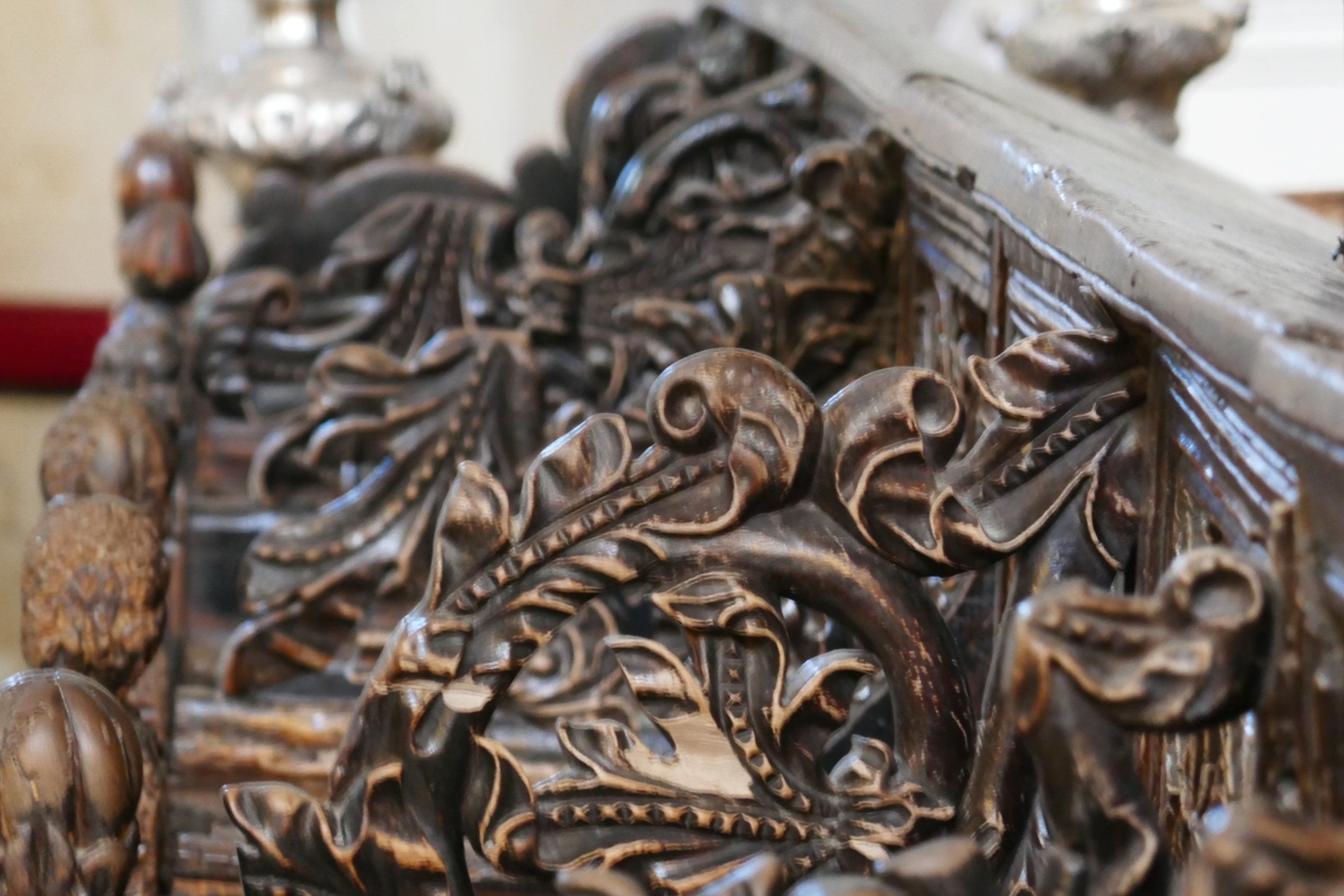 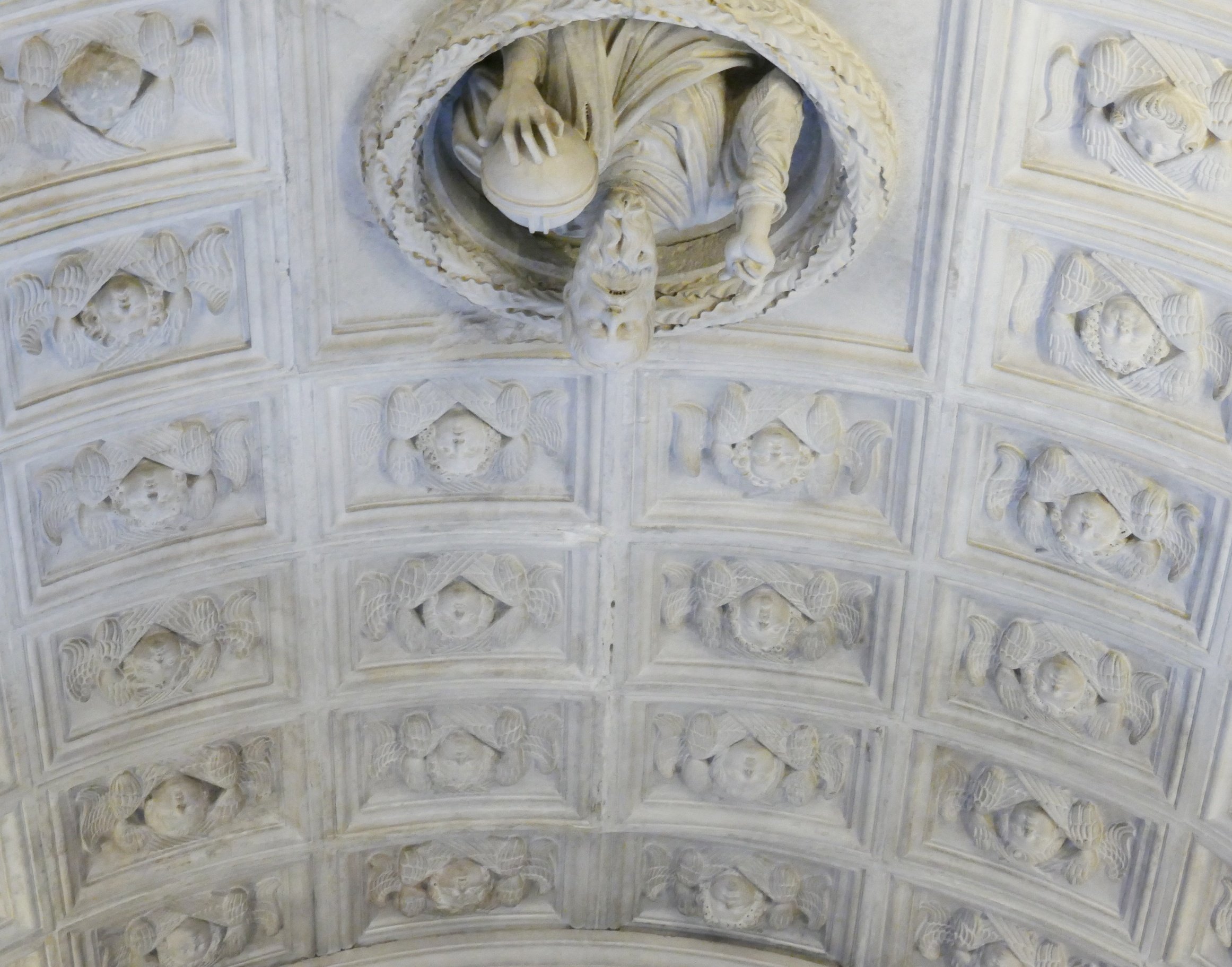 which shows God actually poking his head through the sky to keep an eye on proceedings. The cathedral also has other intricate carving, for example in the baptistry ceiling 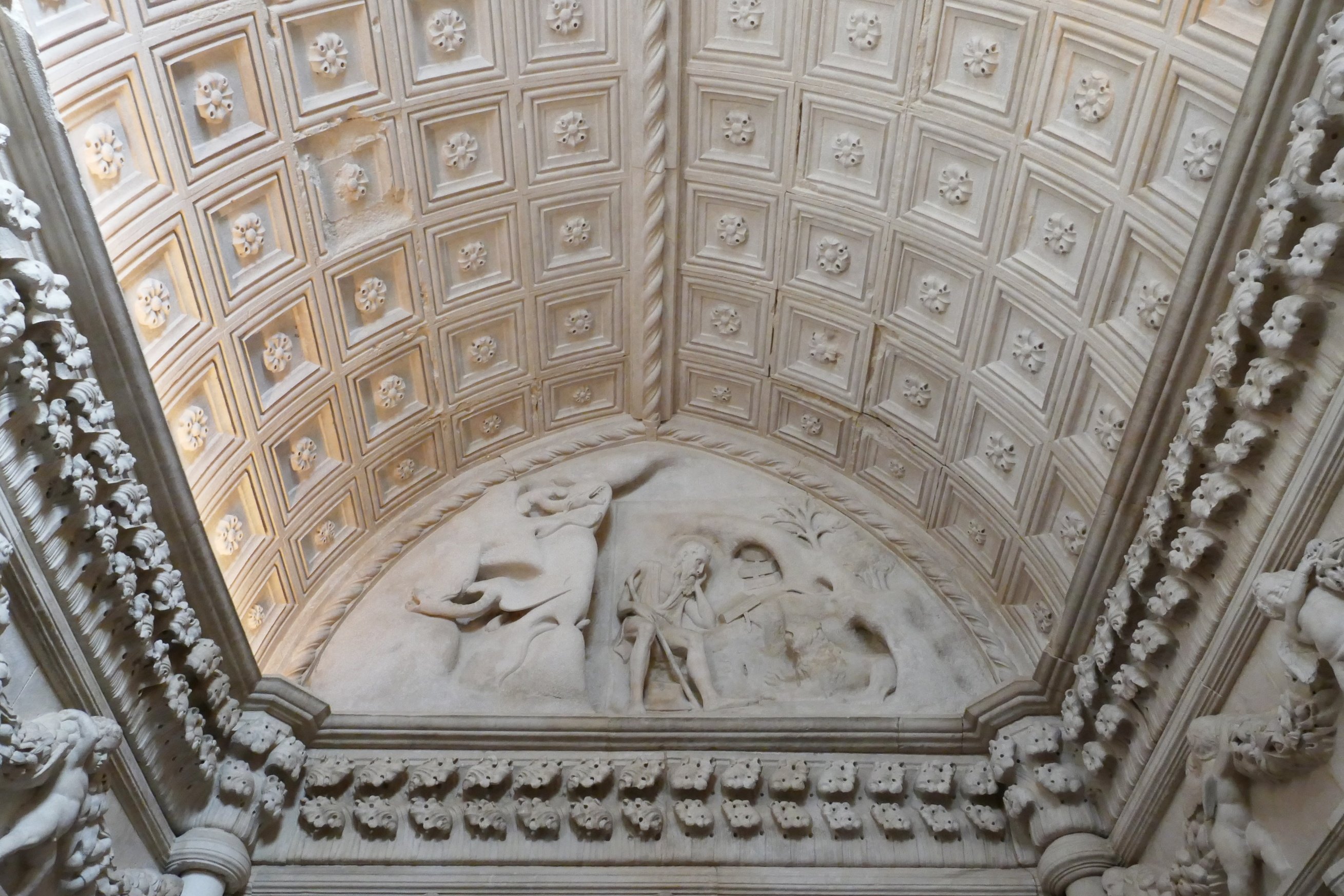 and in the door itself, which depicts many scenes from the bible around it. 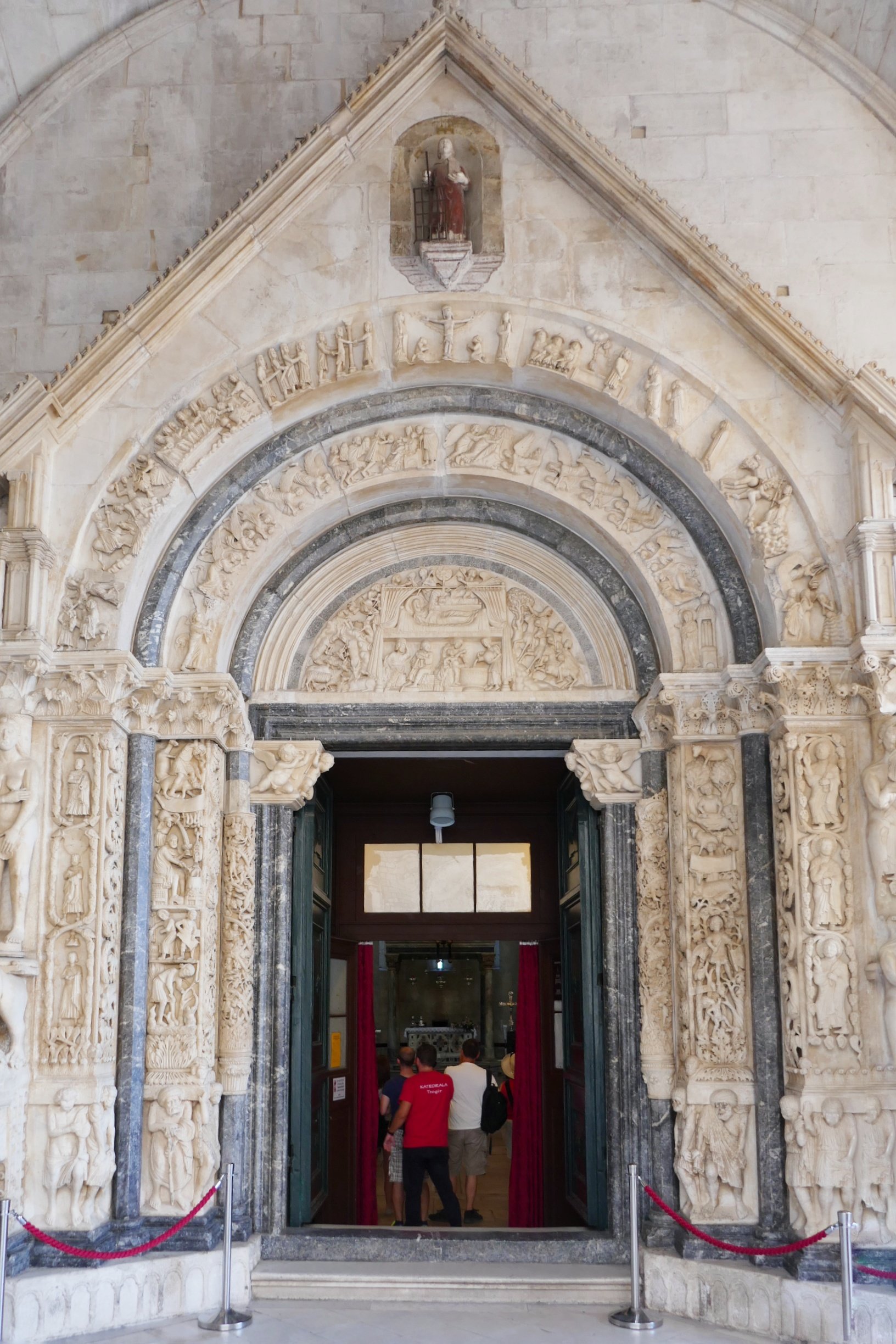 Since the cathedral has a bell tower, it seemed only reasonable to climb up it. Getting to the top gives you a fine view over the town 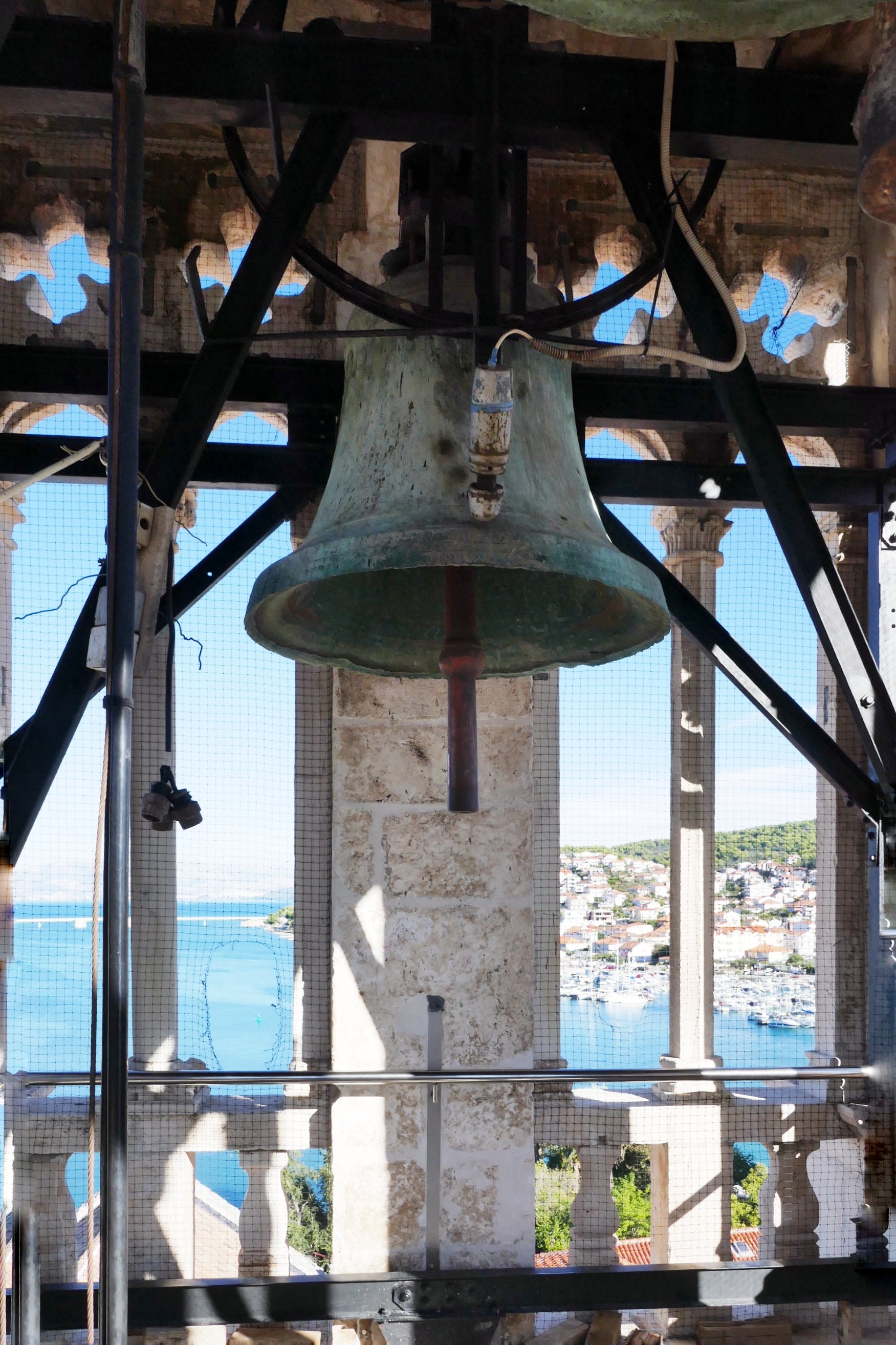 which are active, as you can see from the electric striking mechanism.

We had a little free time, and Filip recommended another good viewpoint, the tower of the Kamerlengo fort which is such a striking sight as you arrive to Trogir. So we paid our 25 Kuna each to climb the tower and were indeed rewarded with a fine panorama.

The old town is to the left of this picture, with its waterfront in the centre. It is notable that the boats on the waterfront are triple-parked, so visitors on these sort of cruise boats might have to walk through two other boats to get to land. You can also see the number of smaller yachts that are moored here – further evidence of how important yachting is in the Adriatic.

As we walked to catch our taxi back to Perla, I took a couple of shots of the handsome waterfront buildings 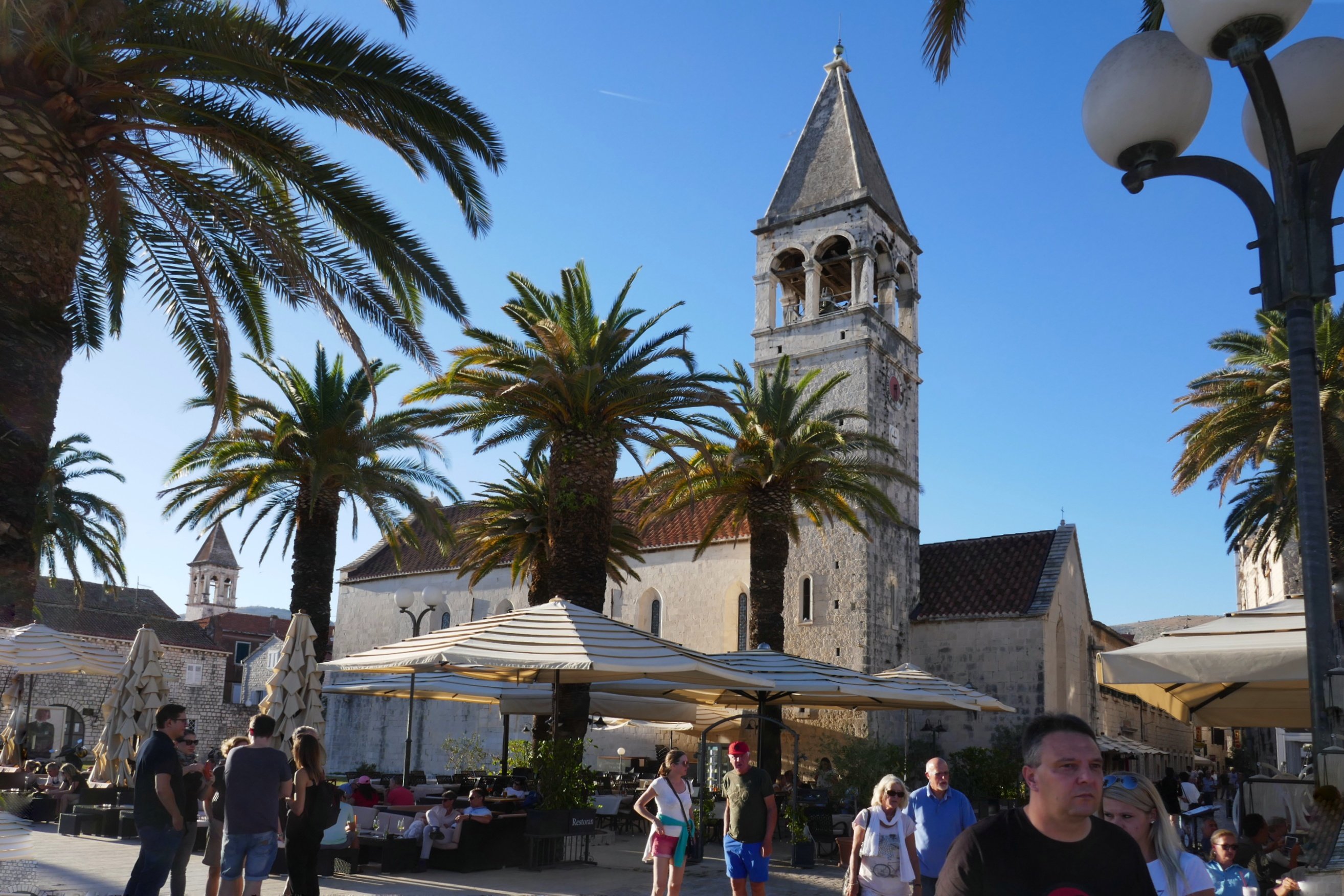 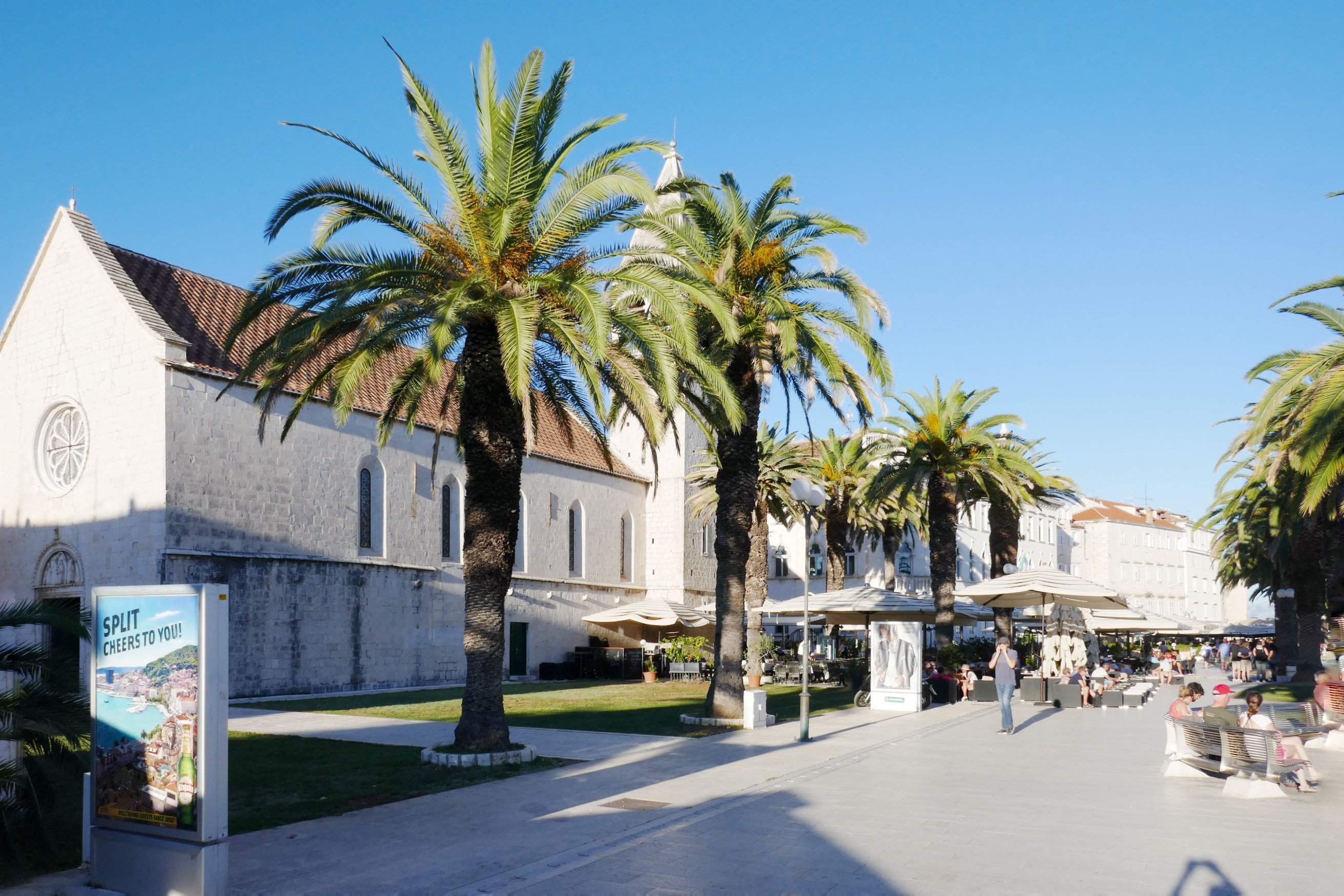 to try to capture a bit more of the vibe of this very pleasant town. It was our last destination as tourists, and an agreeable place to spend time, all the more so because it was unexpected – I believe that we were the only tour group organised by Peter Sommer actually to visit Trogir, which makes up for missing out on seeing Vis.

Back on the boat it was time for packing and the Last Supper on board. Boško, our chef, had prepared us a lavish meal and we took the opportunity to try to drink the boat dry. We failed, of course, but it was fun trying and made for an agreeable Last Night feeling to the whole proceedings.

This is the last blog entry to describe the fortnight’s relentless tourism. Assuming we get home safely, I might be moved to some philosophical musings about the holiday in general, in which case there might be another blog entry. You’ll just have to keep an eye out to see, won’t you?