The lunatic idea behind Stonehenge (“Hey, let’s make a monument of 25-ton stones! And just to make it fun, let’s transport them from 150 miles away!”) seems to have found some resonance in Easter Island. All of the moai, wherever they ended up on the island, were made in a single place, Rano Raraku, and then, somehow or other, transported to their final platform. How? “No-one knows.” But there’s an engaging theory, for which read on.

Rano Raraku is effectively a quarry, fairly high up among the island’s hills.

As you walk through it, the first impression you get is that of heads sticking up out of the ground, and the first descriptions of the moai, such as the one which excited Jane’s curiosity when she was a child, were “the heads of Easter Island”. 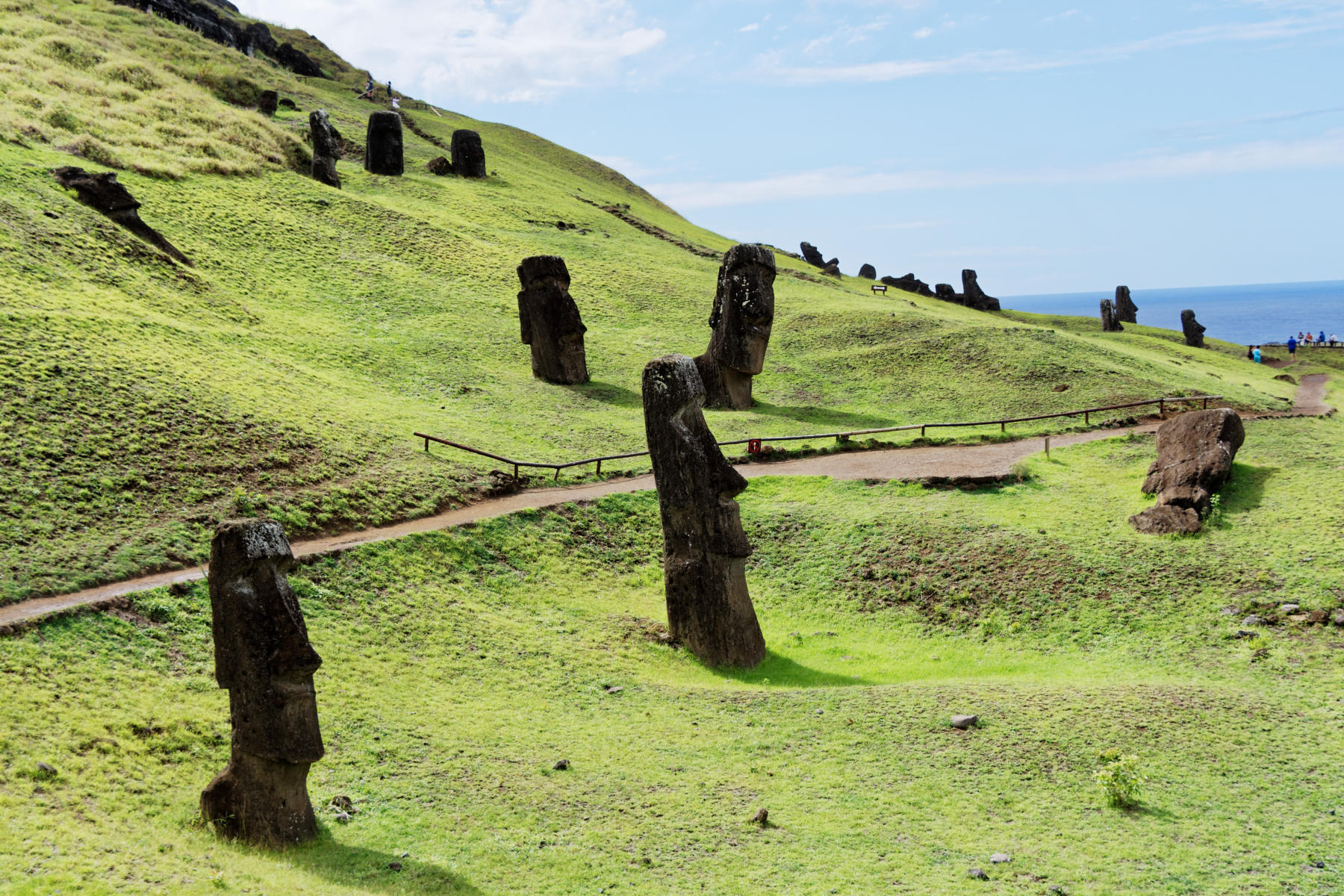 It took a while for archaeologists to realise that these were actually just the tops of full statues that were buried. And then it became clear that the moai were actually fashioned in place. The shape was hacked out of the rocky ground (“the ground” is formed by compressed volcanic ash named tuff, sometimes erroneously called tufa). The moai shape was started lying on its back on the slope, and then, as parts of it were completed, the ground was hacked out from beneath it and it was gradually raised upright so that the completed moai was standing in its own depression. What has happened in the picture above is simply that the depressions have been filled in over the centuries.

Evidence for this can be seen higher up, where a moai is just being started. 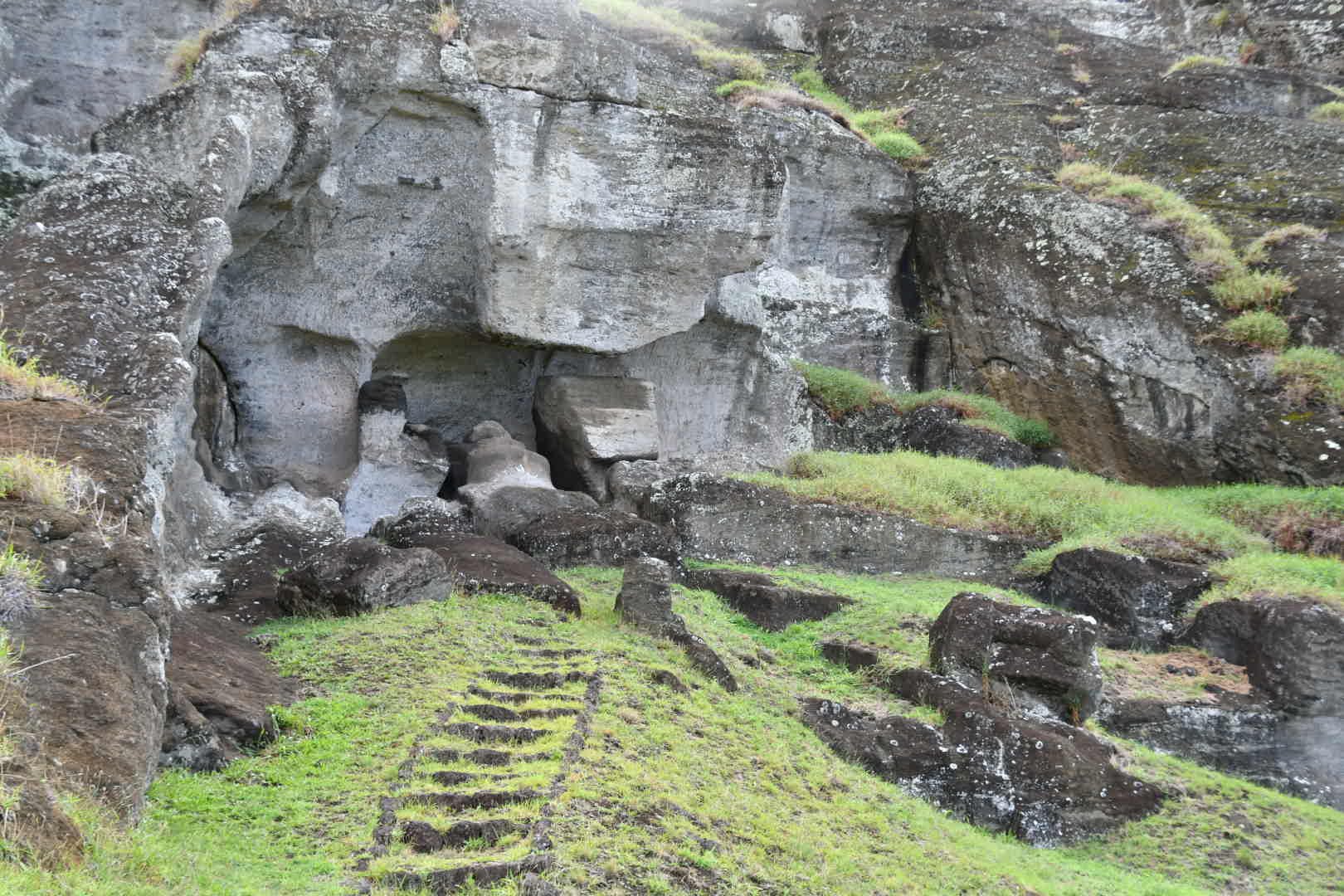 Look carefully just to the left of centre of the picture, into the cavity hacked out of the stone, and you should be able to make out the chin and nose of a moai that’s lying on its back.

There’s a mystery moai at the quarry called “Tukuturi”, unique in that it’s in a kneeling position 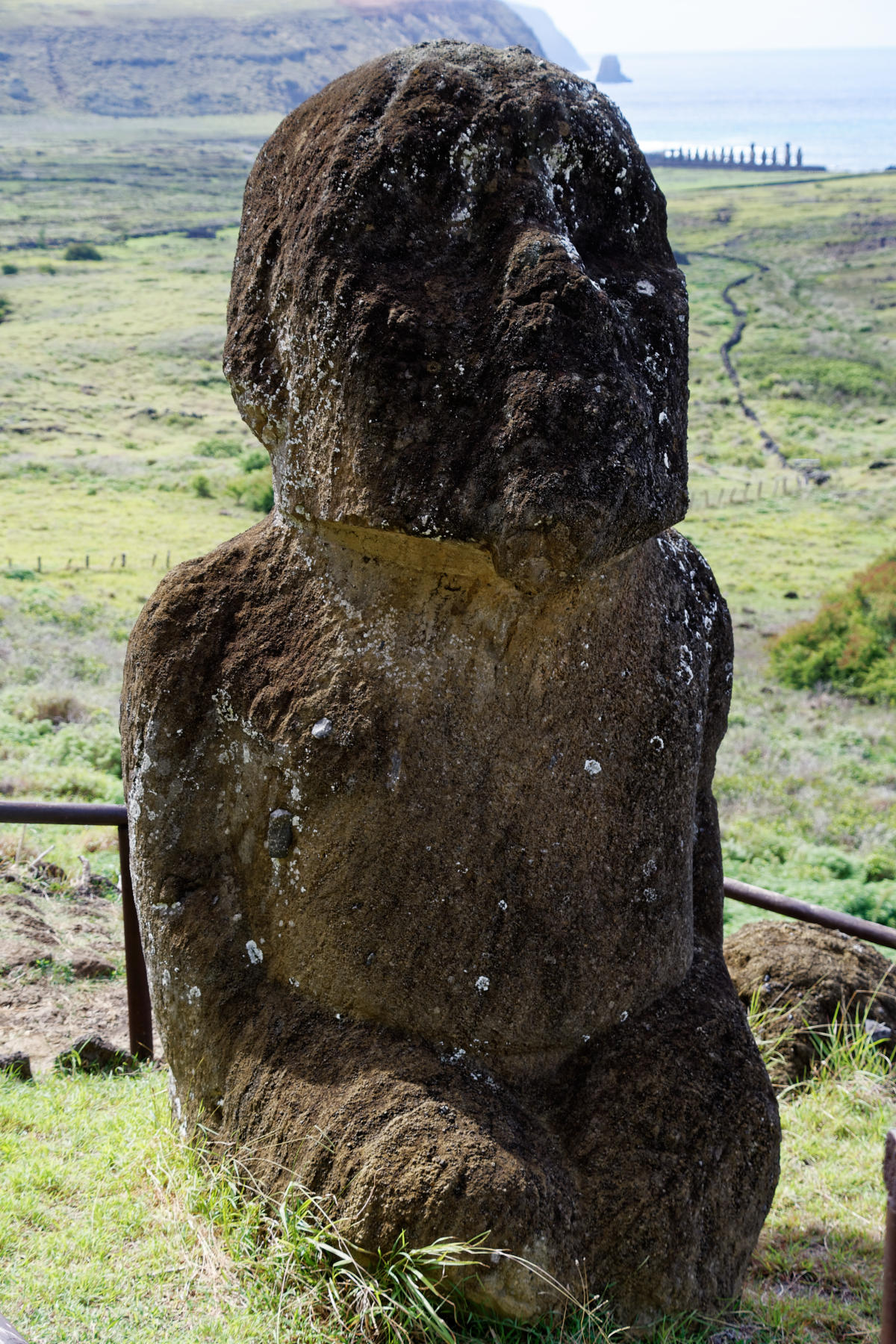 and unusual in the shape of its face, which is less stylised than the ones typified in the Tongariki 15 that you can see in the background. 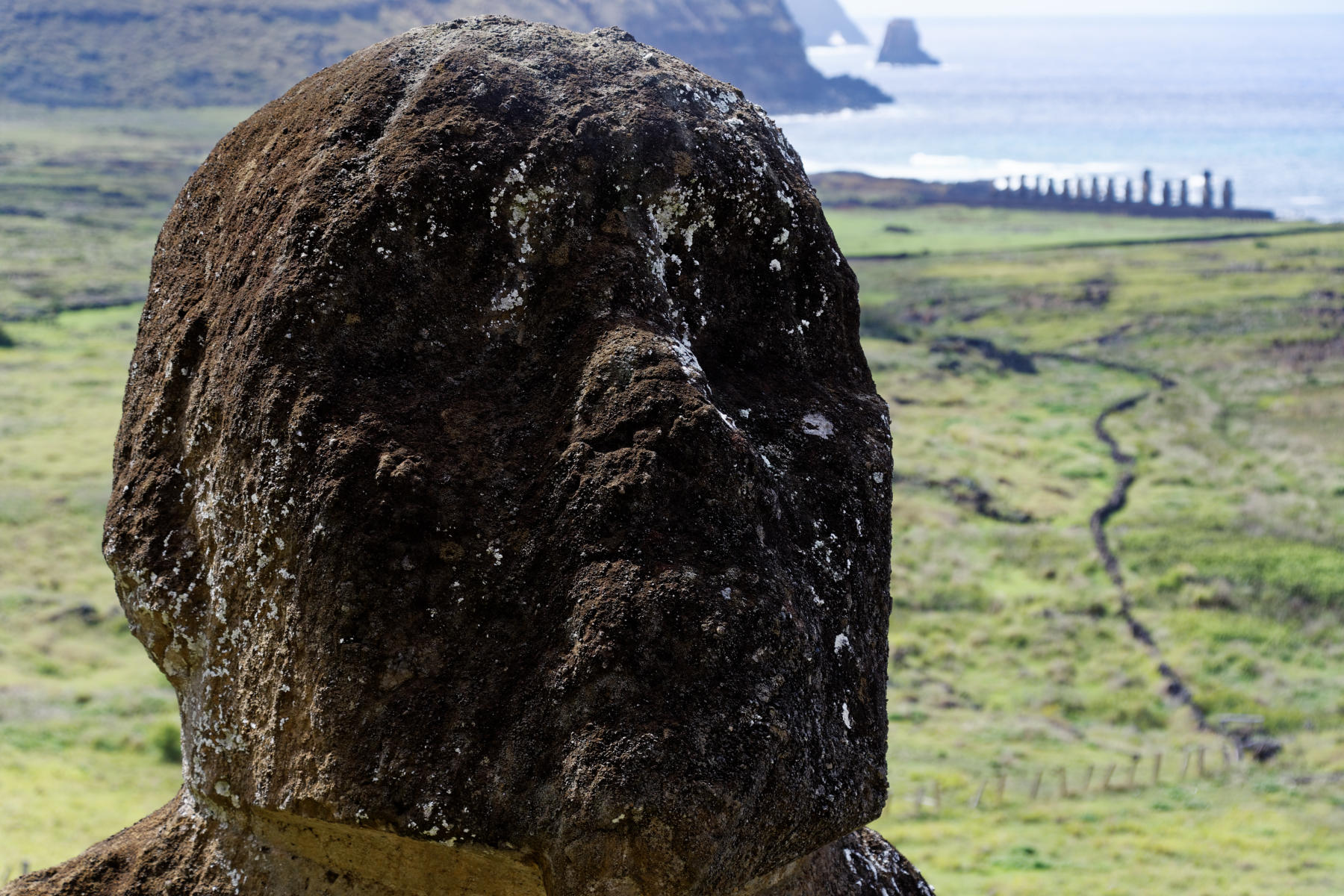 One legend is that it represents a master moai craftsman, and it’s erected to keep watch over the work being done in the quarry. As usual, “no-one knows”.

So, that’s the story of the statues. But what about the other key part of some moai, the “Pukao” – topknots?

These are made from a different, red-cloured stone, called scoria, which is much less dense than tuff. This rock was mined in a different place on the island, called Puna Pau. 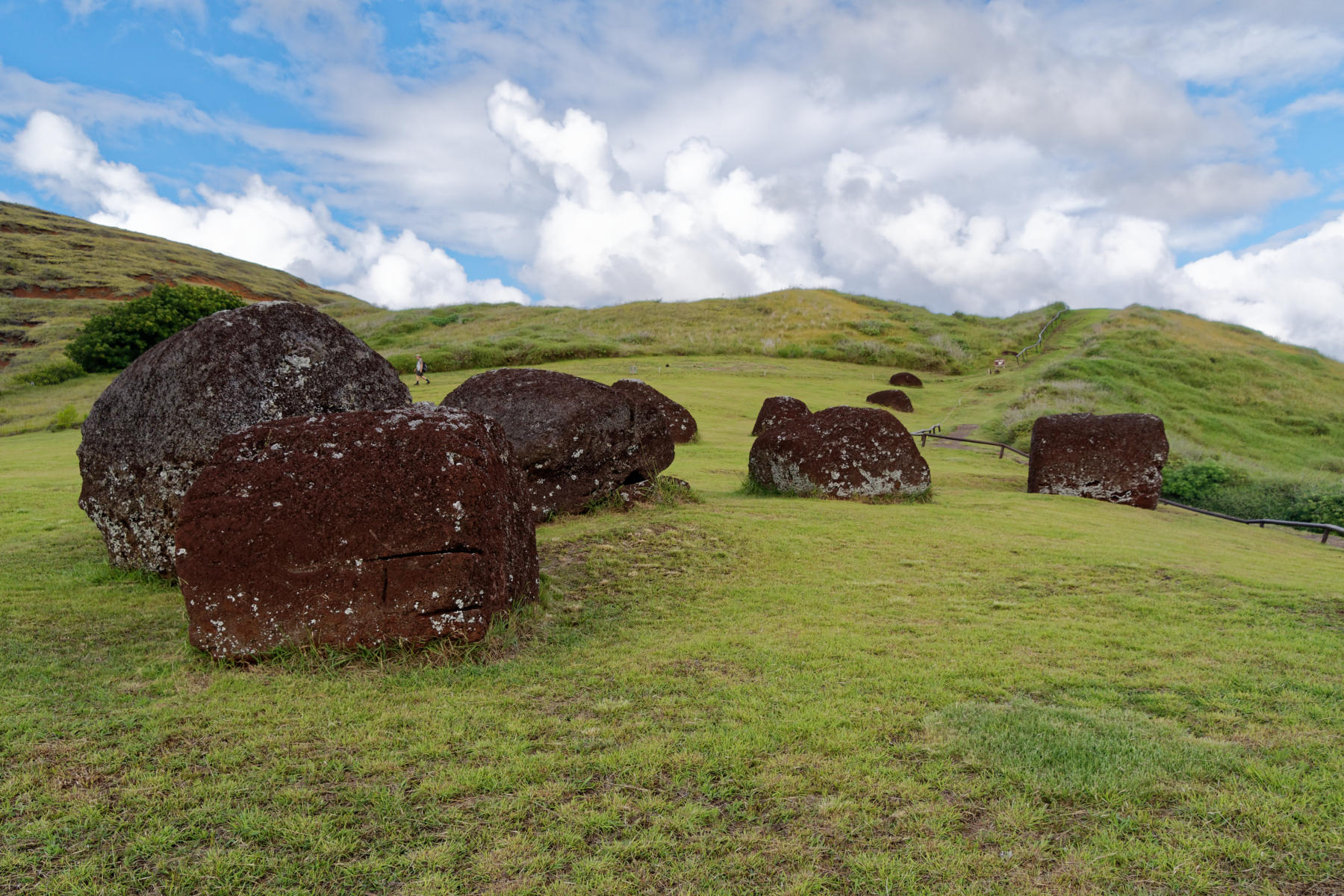 You can tell that the material is easier to work than tuff from this stone. 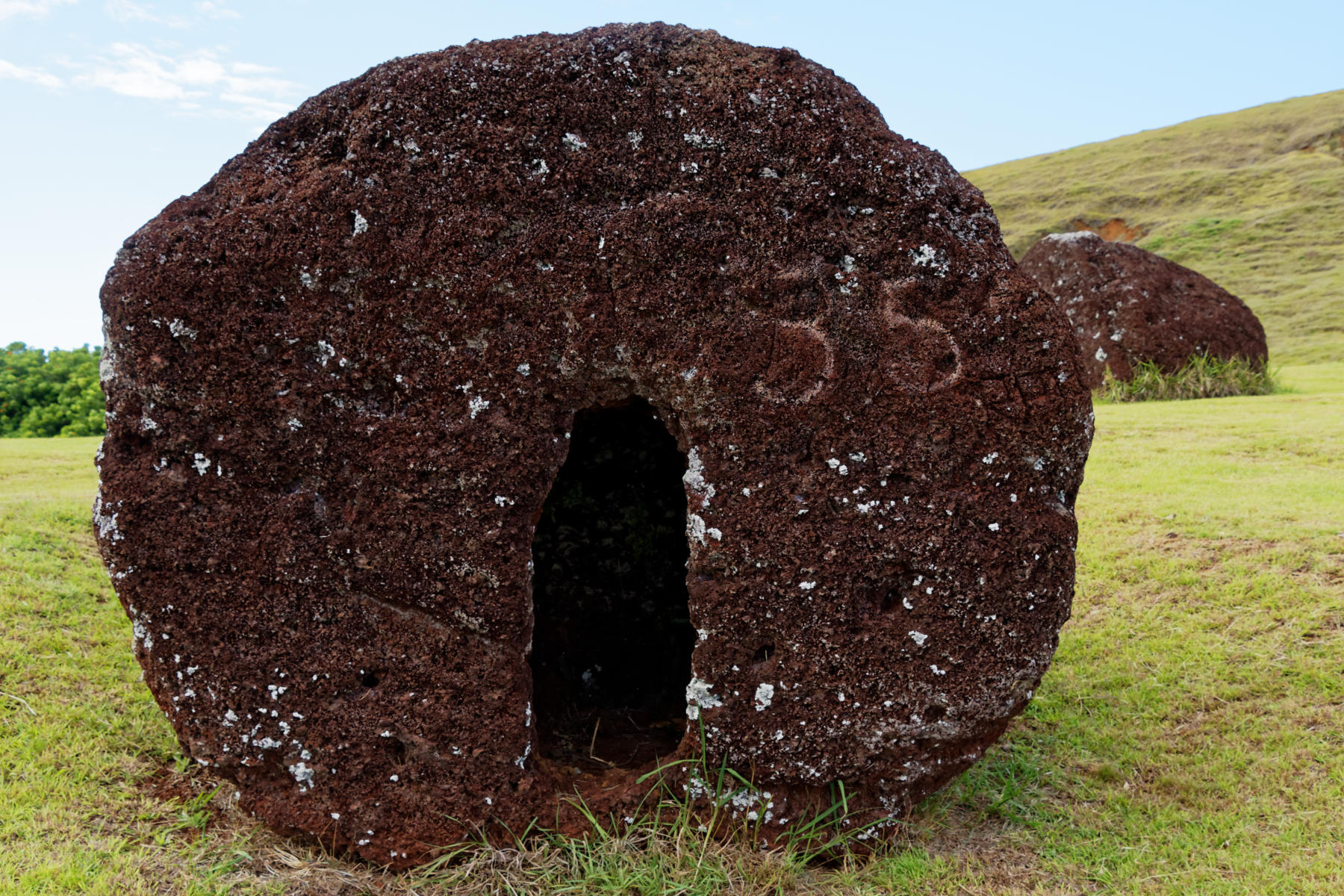 This is not some mysterious symbolic shaping; it’s the work of a shepherd, who hacked out a cavity to shelter from wind and rain!

So, it’s known where the pukao were made – here’s a pit where some were in progress when work stopped: 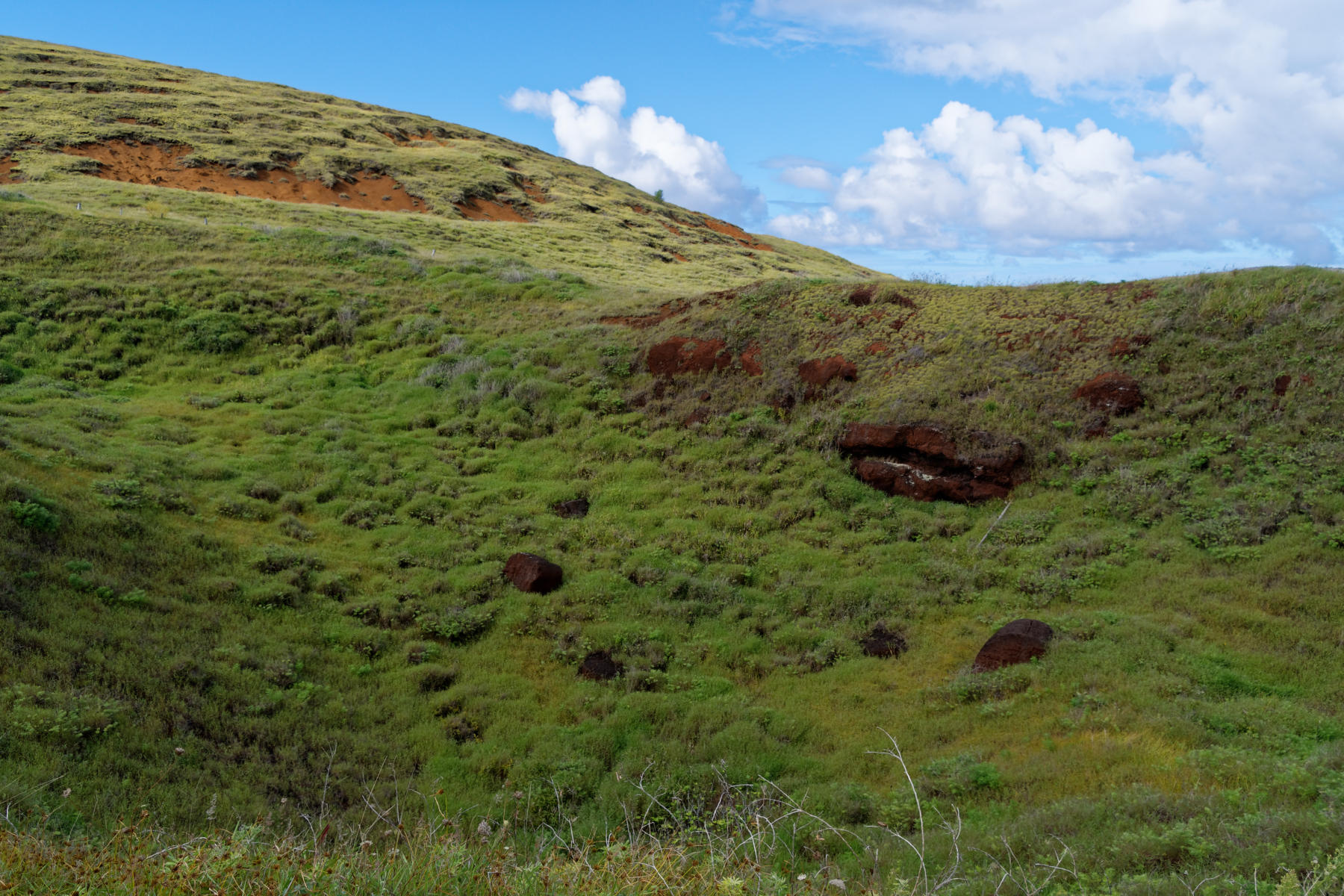 What is less clear is (a) how did the islanders get the pukao out of depressions such as this?, (b) how were they transported to the platforms? and (c) how were they placed on top of the moai? As usual, “no-one knows”.

What is known is that completed pukao featured a depression which matched the top of the head upon which it was to sit. We know this from another location on the island, Vinapu. 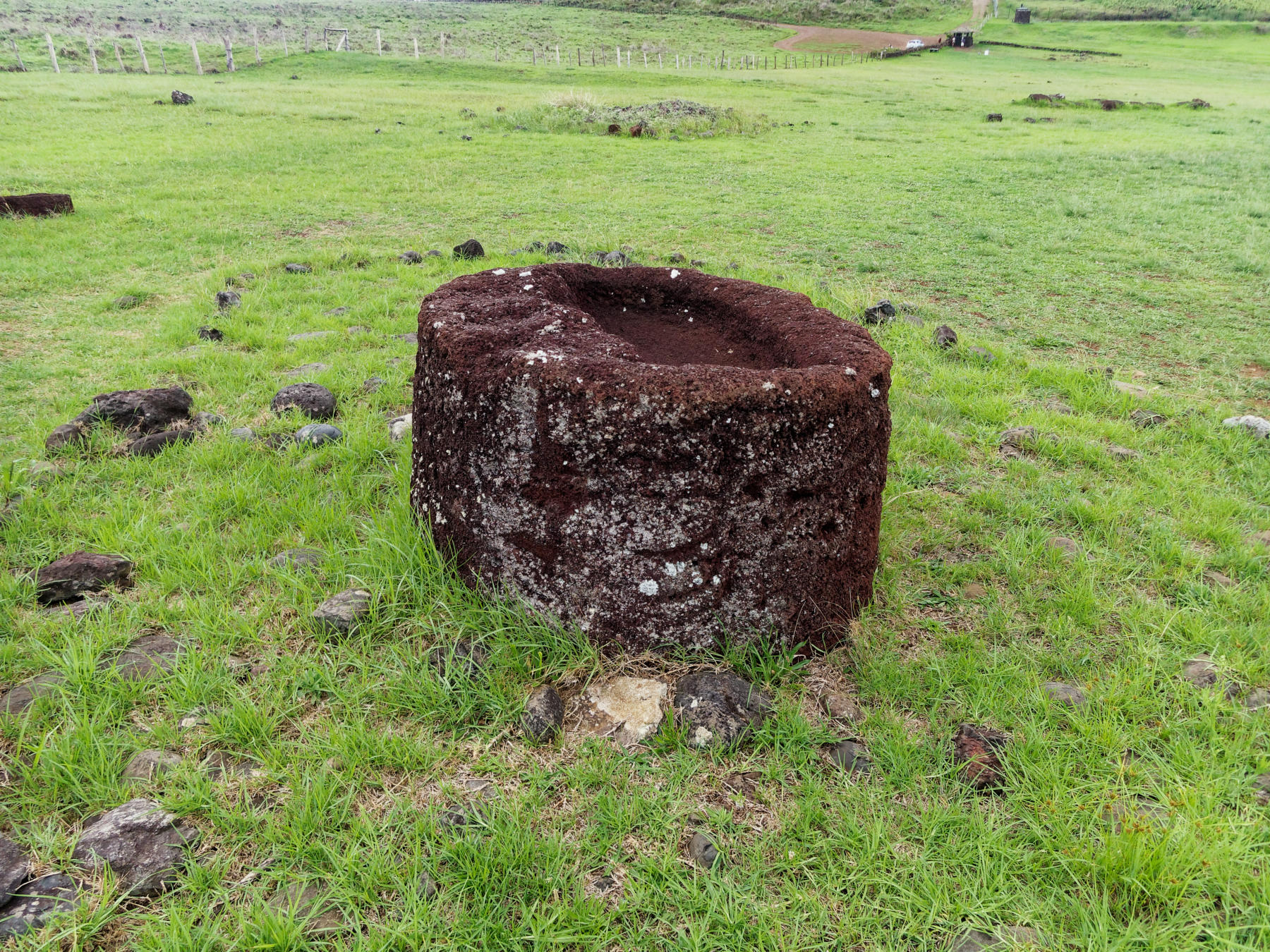 This is an inverted topknot, revealing the depression. You can see that it will not have sat foursquare on a head – in fact the topknots sit slightly forward on the heads.

Vinapu, by the way, is the site which demonstrates most clearly the amazing stoneworking skills of the Easter Islanders. There are two platforms, both of which show astounding precision in the way that stone was carved in order to align exactly. 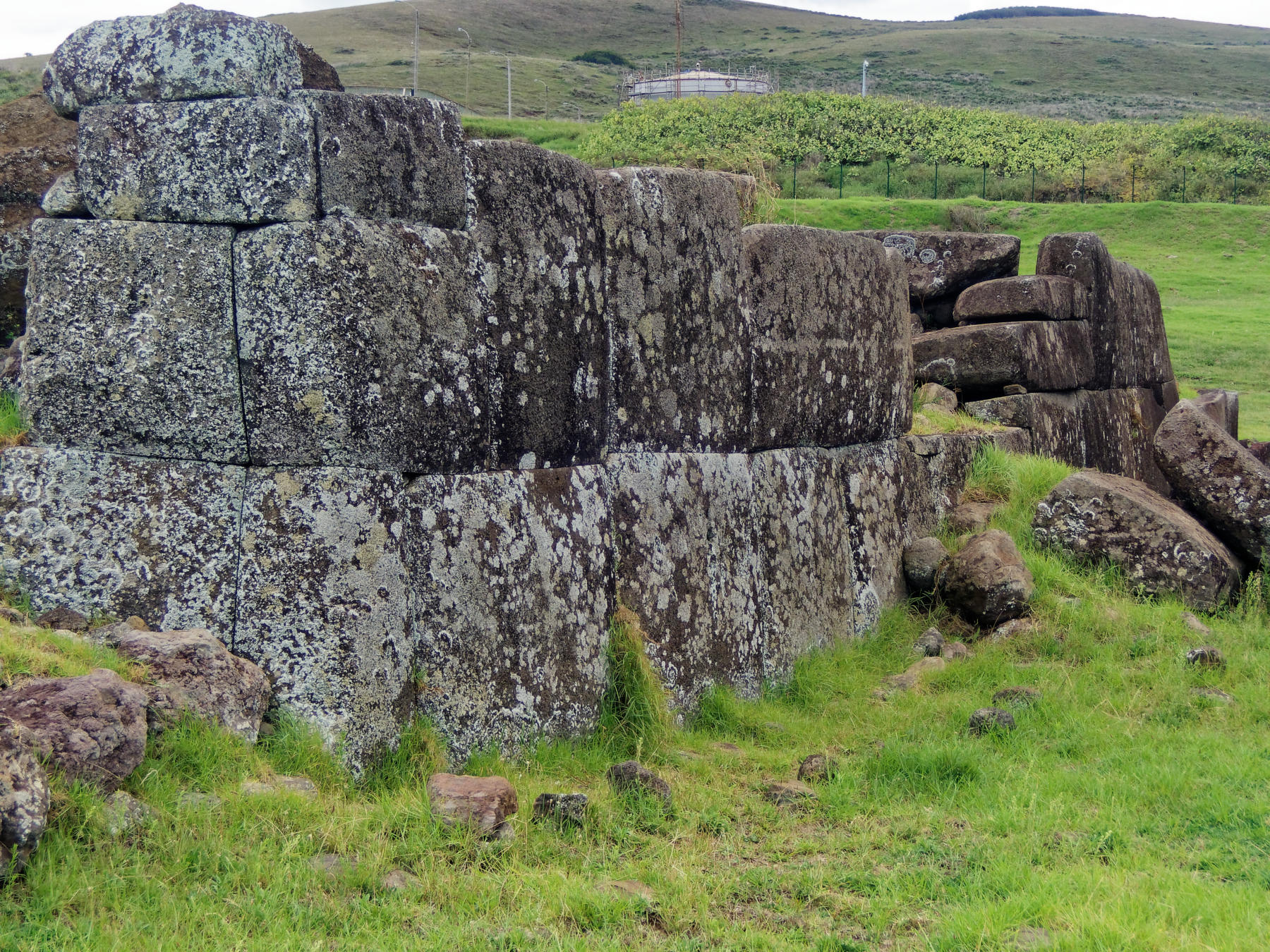 You literally can’t get a sheet of paper between the stones, so precisely are they carved. This is workmanship akin to that found on the Inca Wall at Cusco which we (apparently) will see later on in the trip – keep an eye out for the blog post on that – but experts cast strong doubt that there was any explicit cross-fertilisation from Inca culture. There is also a legend that the Islanders found a way to make stone soft, so that it could be manipulated just like cheese. But, as usual, “no-one knows”.

The final part of the puzzle is – how the hell do you move a stone statue that weighs several tons? We know that they were made in one place and then moved to their final destination, and, as usual, there are several theories about how it might be done, but “no-one knows”. Our guide Malena told us of the words of one old woman who asserted that the moai “walked – two steps a night”. This sounds preposterous, but there’s actually a video of this being done with teams of men on either side making a replica (10 ton) moai sway from side to side, while a team from behind stopped it falling forward. In this way, the moai “walks”:

And another thing: assuming that this works (and recent ground scanning techniques have uncovered trails radiating from Rano Raraku that look like they may be tracks along which the moai may have been moved), how did they get the damn’ things up on to their platforms, sited accurately on their stone plinths?

For the continuation of this story, and what happened to the moai culture, read the next post – click here.