Today was the first of the daily walks that form the first week of our vacation. The good news was that it was a short walk, around 6km. The bad news was twofold: both the gradient and the temperature were going to be high. I don’t do uphill very well even in cool temperatures, so the prospect of scaling a peak in 30° heat made me quail. I really, really didn’t want to be the balding, overweight, sweaty bloke at the back.

As part of a relatively frugal breakfast (already in the holiday mode of simultaneously feeling stuffed full of yesterday’s dinner and yet somehow starving hungry) we did the English thing of stealing a couple of apples from the breakfast buffet to help fuel us on the walk, went to get extra water from the local supermarket (engagingly called Tommy) and got on our tour bus to go to the starting point, a village called Gornje Obod.

My fears about the gradient were immediately confirmed, as we started off up a very steep slope. Fortunately, after a while that wasn’t nearly short enough, it gave way to a path that wound its way up somewhat less steeply. 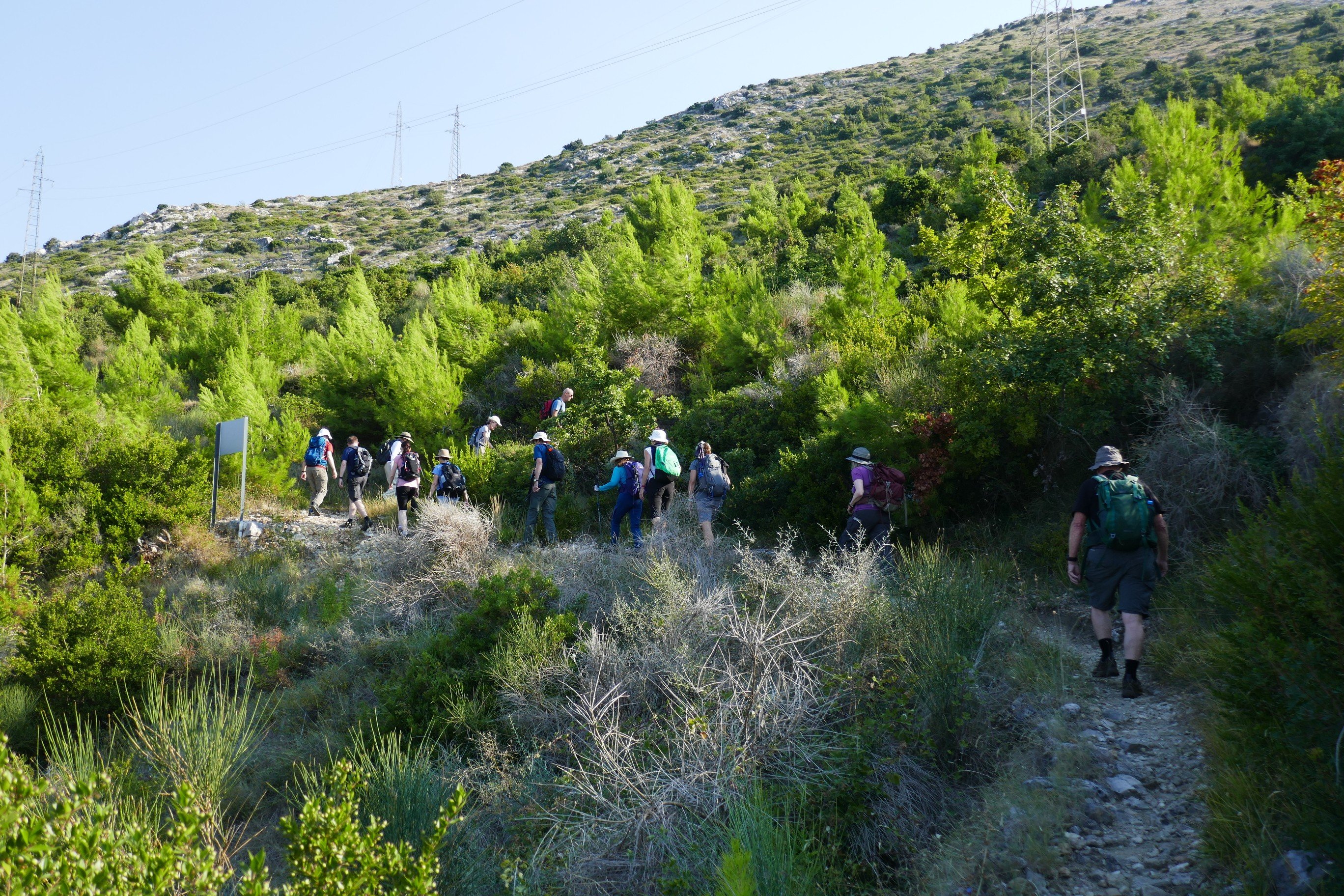 On the way up we got several lovely views over a peninsula village called Cavtat (pronounced Tsavtat, by the way). 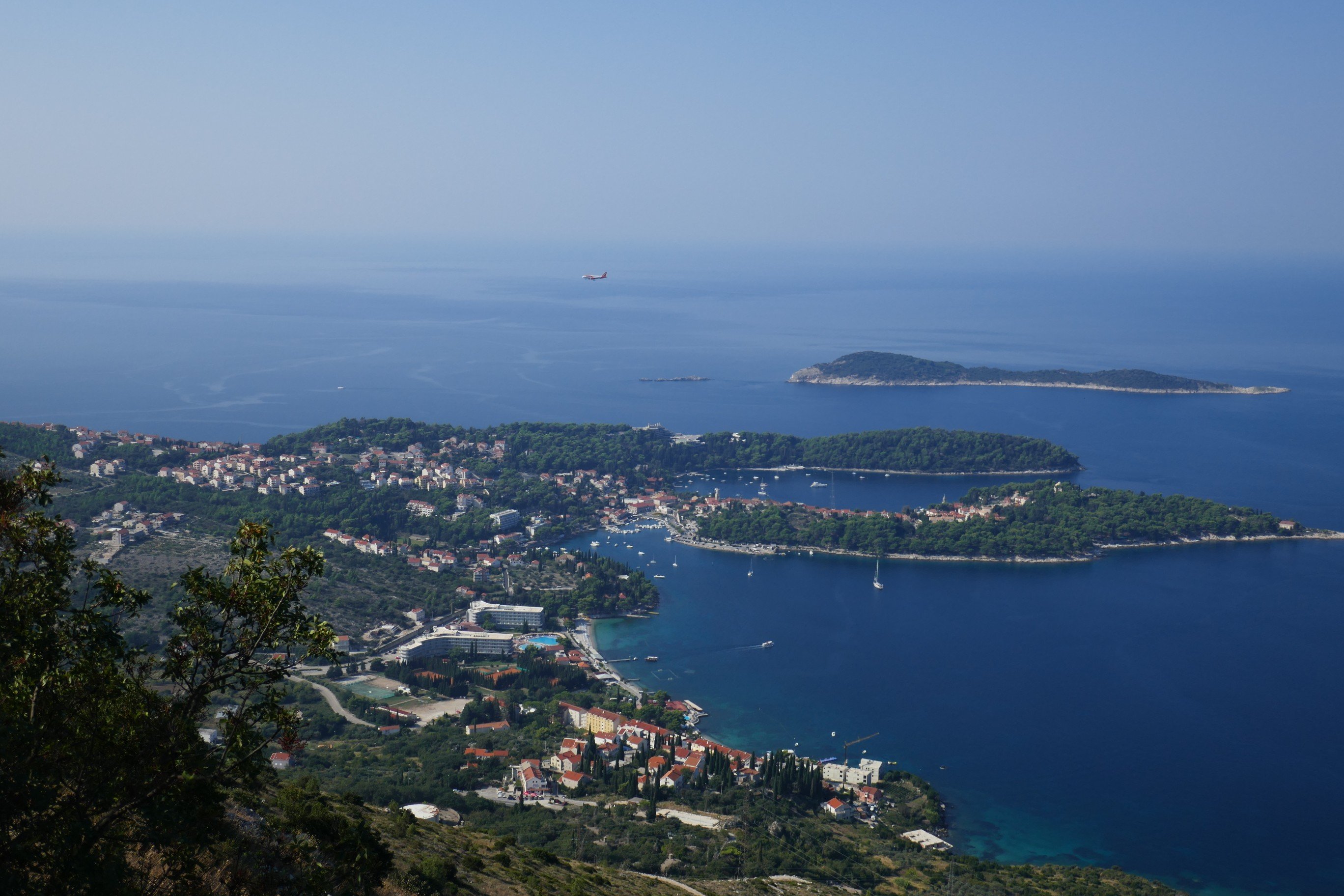 (if you look carefully above you can see an aeroplane on its way into Dubrovnik airport).

We ground our way up this path, which was actually a military path created during the time of the Austro-Hungarian Empire quite some time ago, for a couple of hours, pausing now and then to listen to some nuggets about local history, geography and culture from Željko (not a rest, of course; oh, no, not at all) until we reached a village called Velji Do, which was good and bad news. The good news was that there was some shade, a commodity notable on the route so far for its absence. The bad news? The restaurant, which might have served us beer, was shut. On balance bad, then.

Things got a lot worse after that, as we headed up the “Ronald Brown Pathway” towards the summit, which is called Straazisce. Below is a picture of the village. The Ronald Brown Pathway goes up the hill on the right and if you peer very closely and use your imagination a bit, you can see a cross at the top of the hill, more of which later. 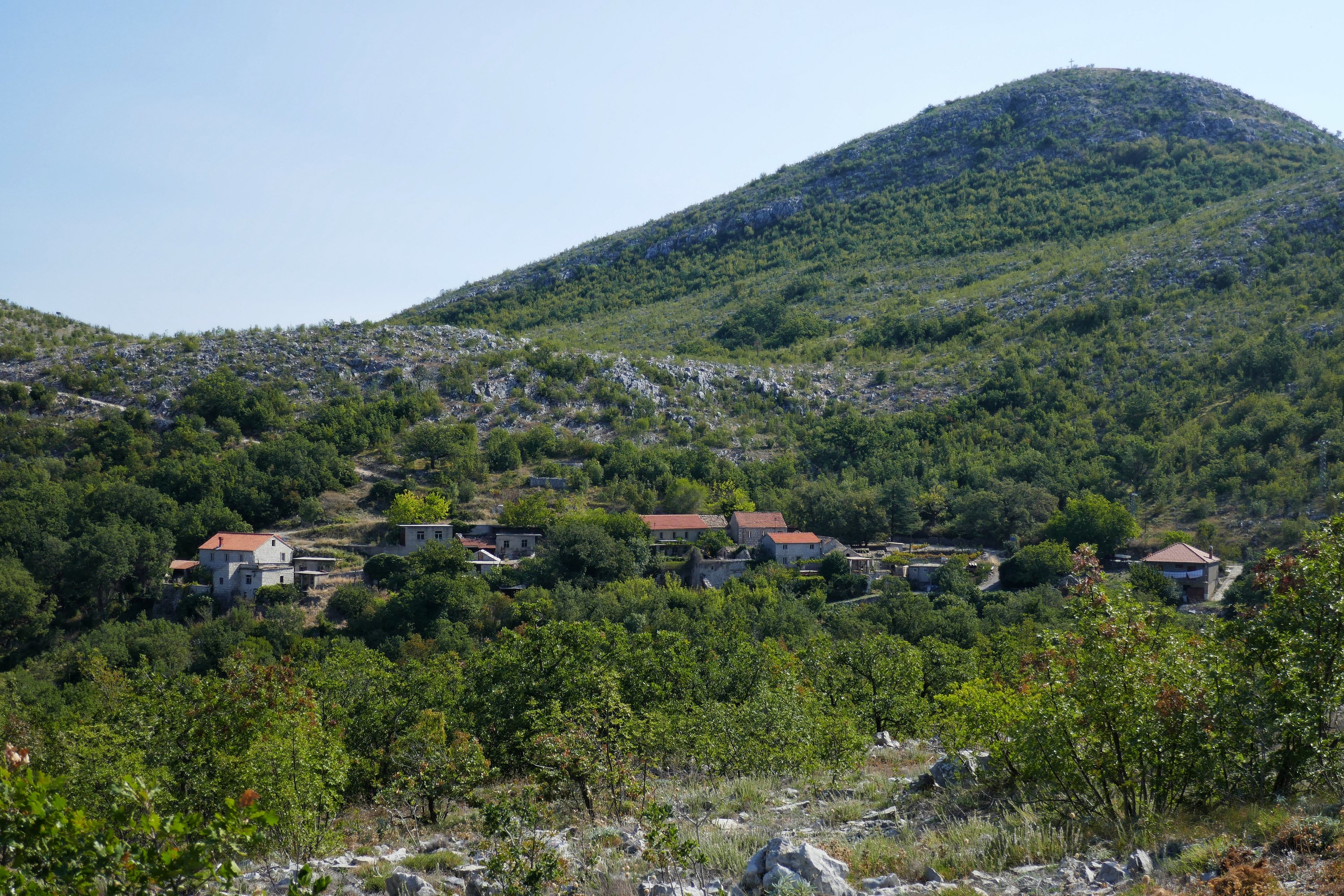 This climb recalled the worst times of our recent walking holiday in Slovenia, which involved some 40 minutes slogging up a 1-in-1 slope in 30° heat. The main difference with this path was that it was in Croatia, not Slovenia. 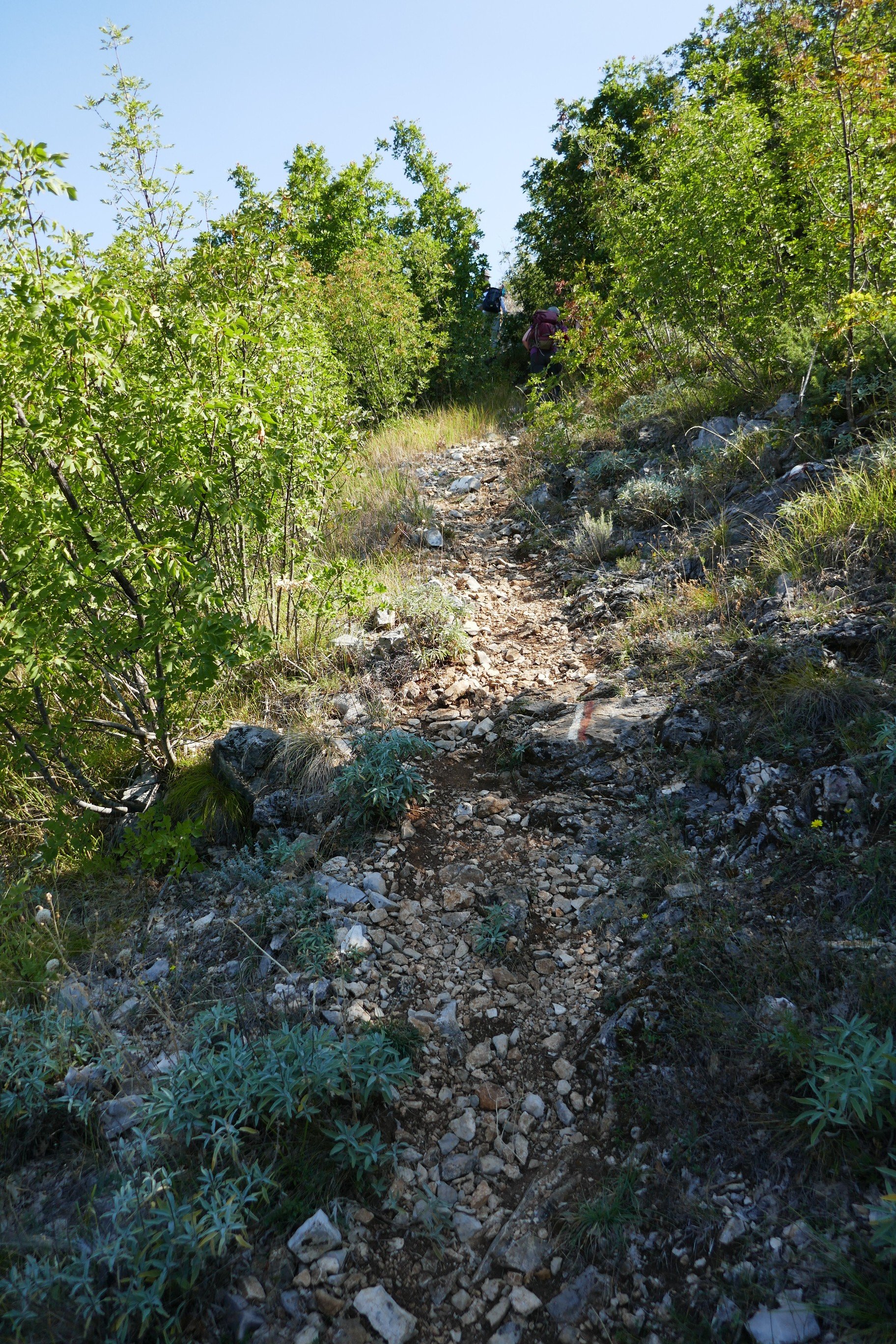 This photo doesn’t really convey the hideous gradient of the path. It does, however, give an inkling of how far I had fallen behind the rest of the group, all of whom were better at uphill and heat than I. So, yes, I had become the bald, overweight, sweaty bloke at the back. I disguised as much of this as I could by wearing a hat.

Some 45 minutes later I finally caught up with the rest of the group, mainly because they’d stopped, having reached the summit. There is a memorial there to United States Secretary of Commerce Ronald Brown, who was one of 35 people killed in 1996 when a US military aeroplane carrying a trade mission crashed into the hill instead of landing at the airport. The memorial takes the form of a huge metal cross. I’d love to share a photo with you, but the picture I took was out of focus and I was so knackered I didn’t notice until later. I did, however, get a picture of the inscription on the base 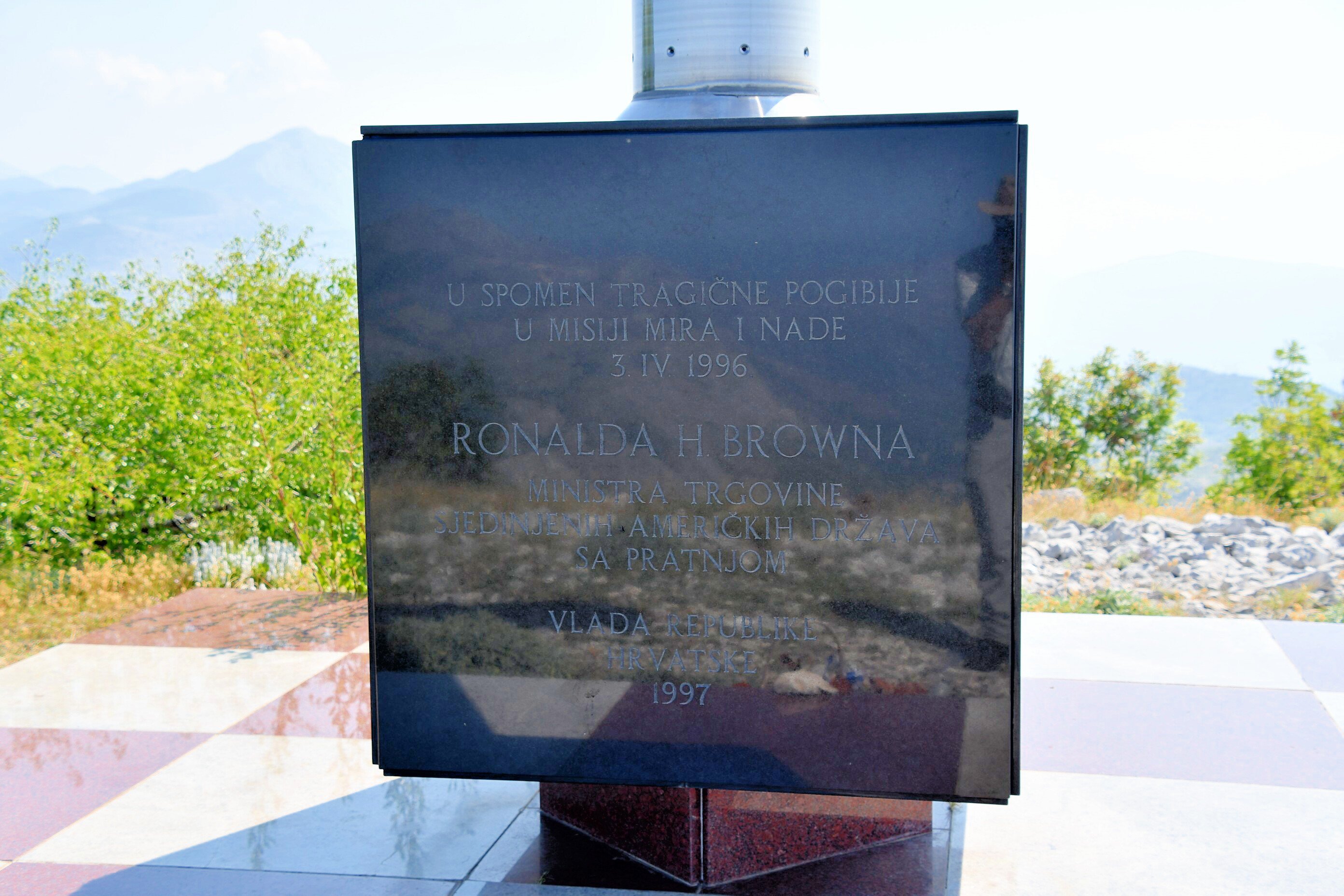 (the other three faces carry the names of the people killed in the crash) and I also got a picture of the view from the top, which is pretty good. 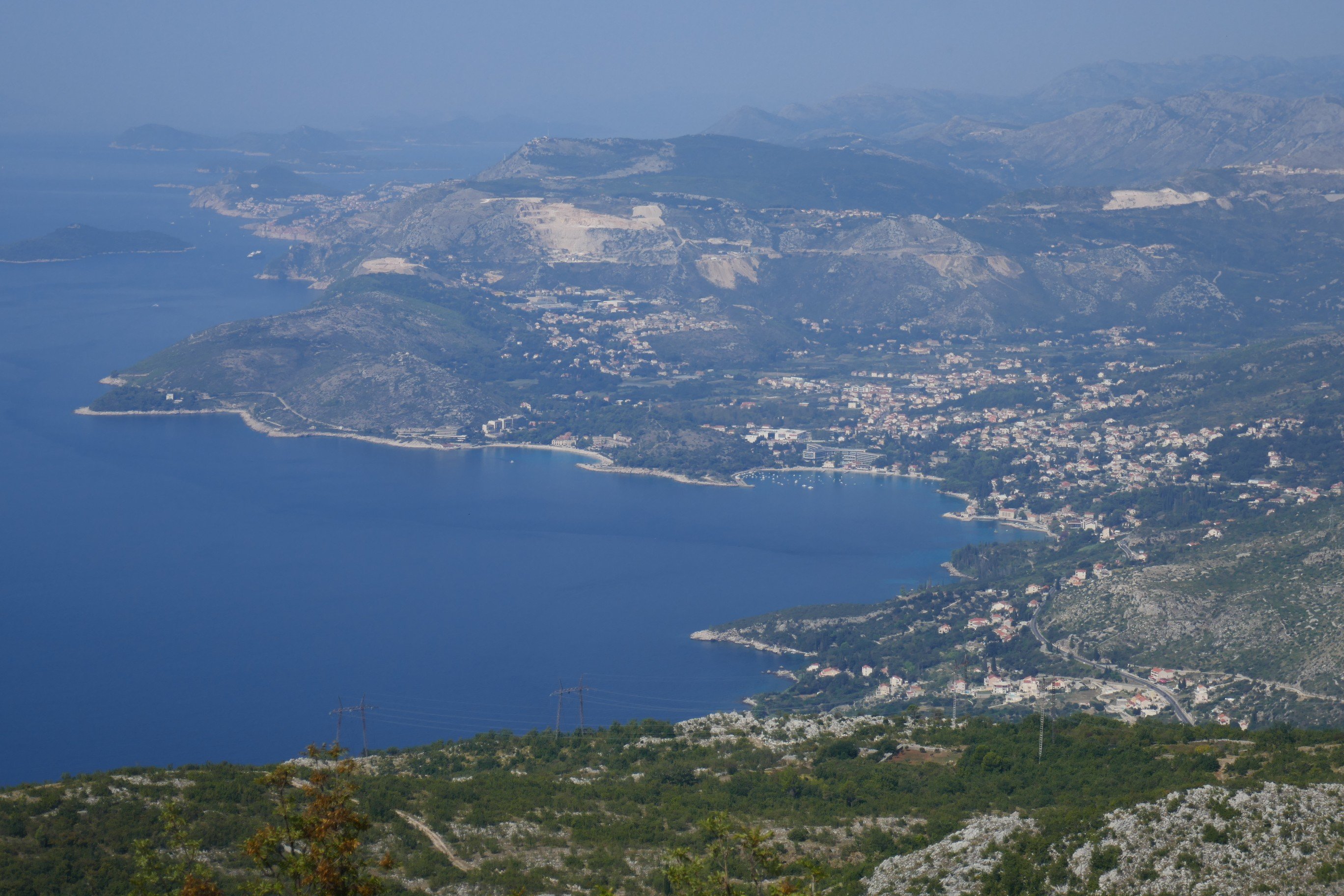 Having ground our way up to Straazisce, there was nothing for it but to grind our way down again. It may not be physically as hard or unpleasant as going up, but that doesn’t mean it’s easy, as it takes its toll on knees, ankles and feet. But we made it down OK (in half the time of getting up). Here’s a Relive summary of the walk: https://www.relive.cc/view/e1198905892. Note to self – take more photos with the phone next time; but it shows an engagingly wiggly path up to the peak.

Whilst we waited in Velji Do for our tour bus, Željko gave us a summary of the geopolitics of this troubled region. 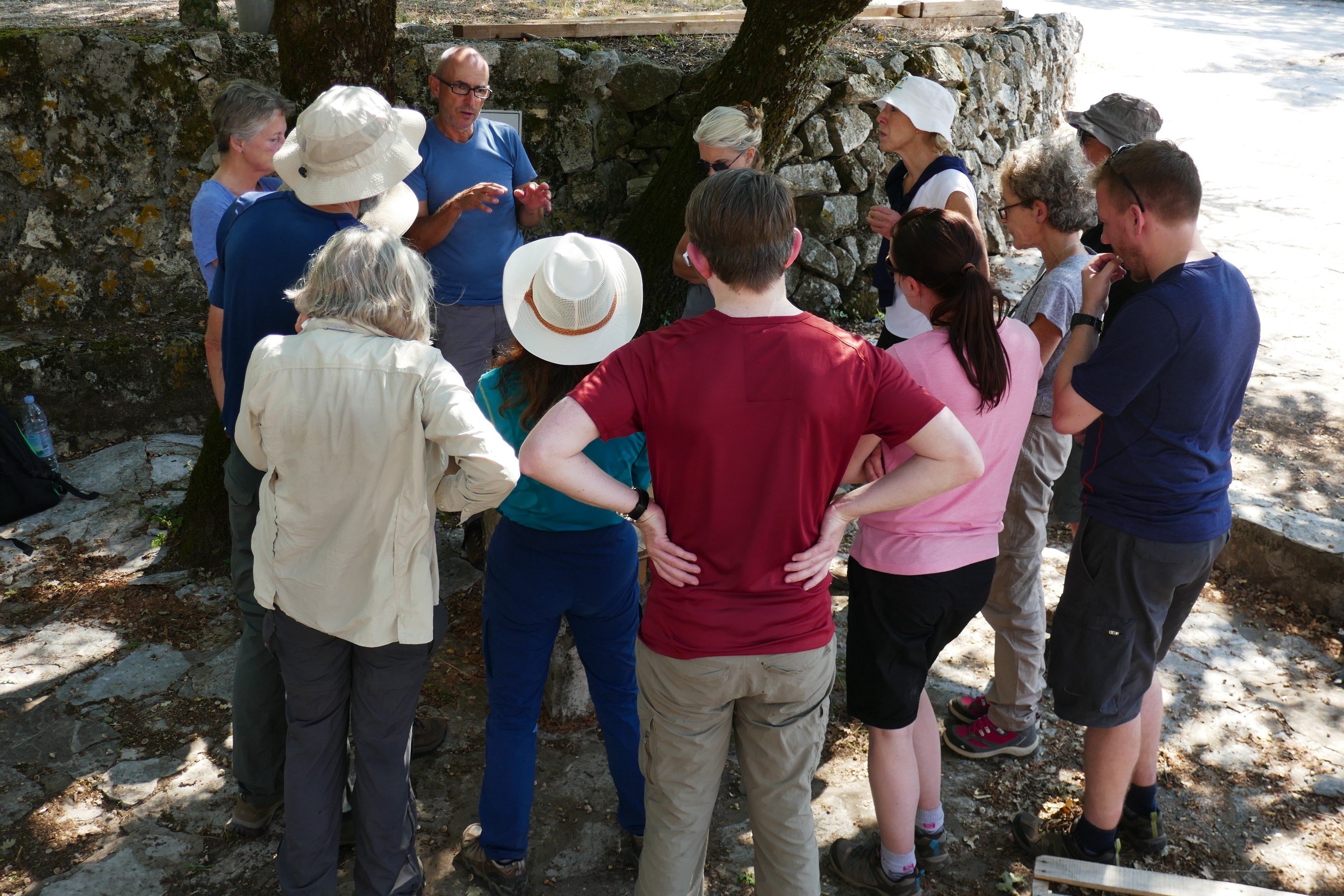 The history of Yugoslavia and today’s relationships between Croatia, Serbia, Bosnia, Hercegovina, Montenegro and Macedonia are bewildering, and far too complicated to cover here (particularly when you throw in the bugger factors of Albania and Kosovo). But it was interesting to get some insight into the complexities and it agreeably passed the time until the bus came to take us back to our hotel.

Once there, most of the rest of the group elected to go into Dubrovnik Old Town, but Jane and I cried off this option, as we’ve been there before, preferring instead to find a nice quiet lunch near our hotel at the restaurant attached to the Hotel Dubrovnik, which might have been called Nono (as it said on the menus) or Uvala (as it said on the sandwich boards outside). We will probably go to our graves not knowing which was the right name. But we got an adequate lunch and a mightily needed beer for me, before walking down to look at the beach which is one of the attractions of the Lapad area. 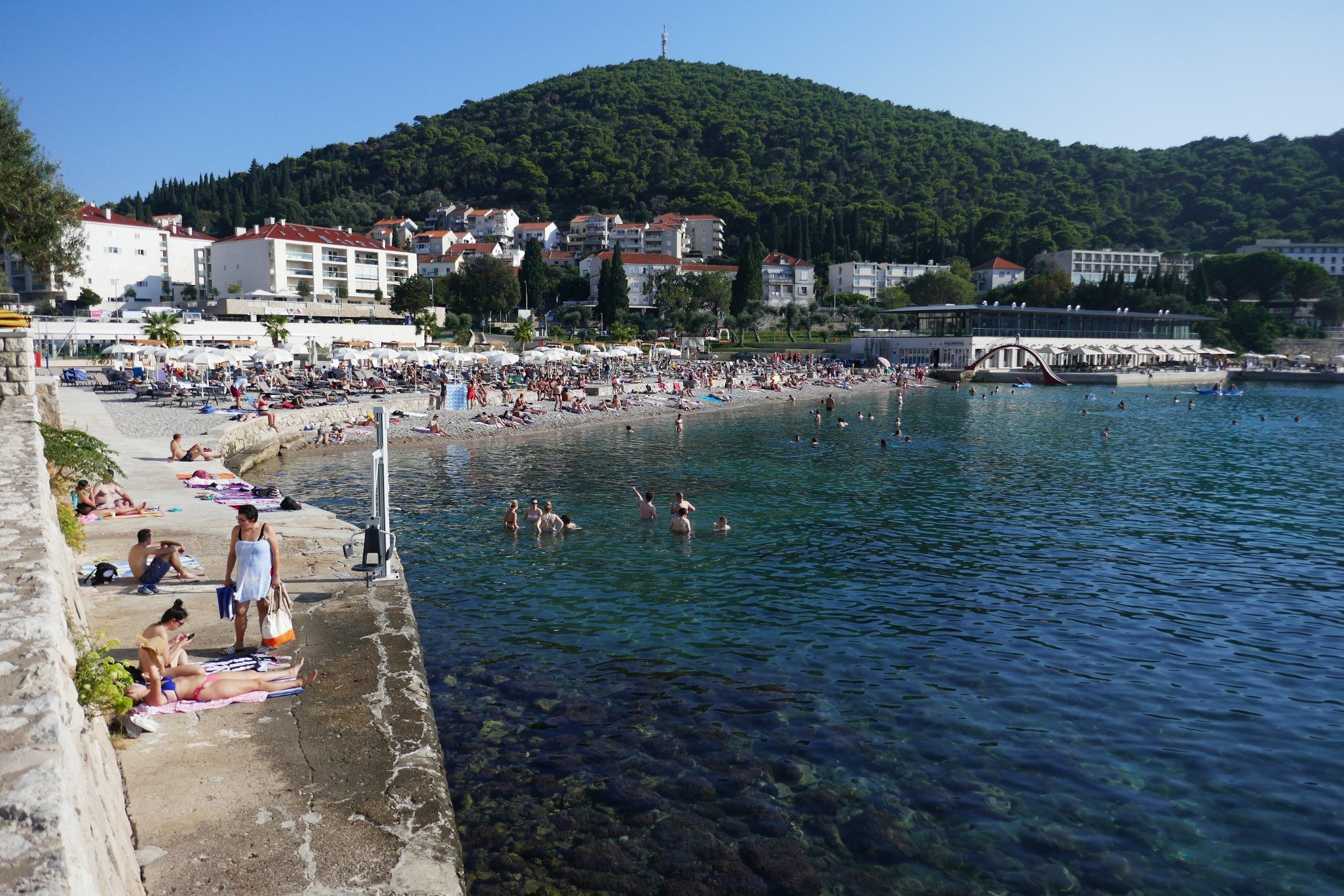 before heading back to our hotel for a bit of a kip, followed by some domestic admin from Jane using the marvels of modern technology to extract some vital information from home via a video call, some deathless prose from me (these blogs don’t write themselves, you know) and finally cup of tea (Jane) and G&T (me) in the scented dusk of a Dubrovnik evening in the hotel garden. Tomorrow may be hot and sweaty, but for now, we’re cool. 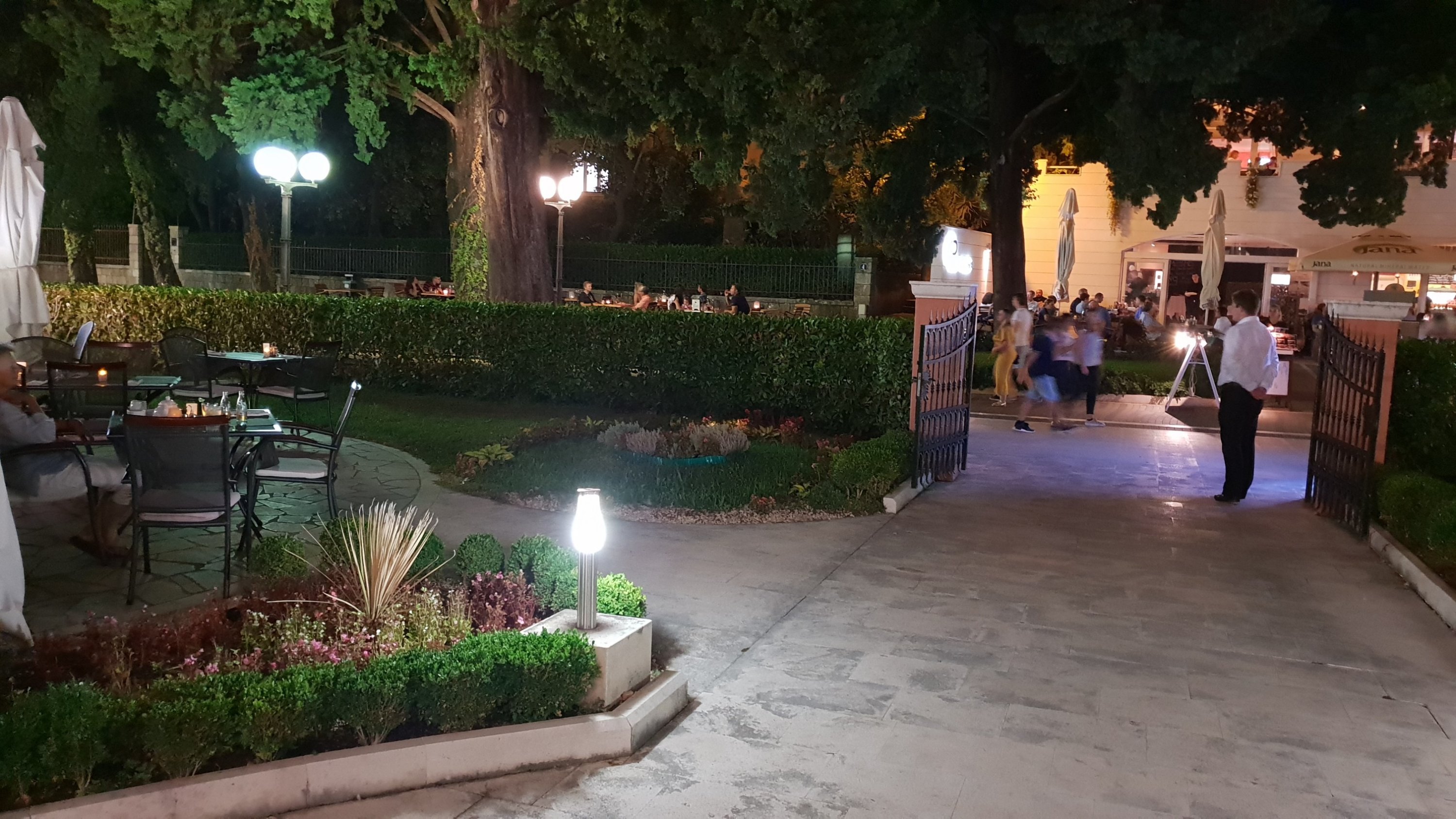