We arrived in Santiago on schedule, after a relatively crash-free flight. BA acquitted themselves pretty well on punctuality, food and service, and they didn’t even mind that we were very nearly late because we forgot to get our foreign currency until absolutely the last moment.

During the flight I became concerned about potential problems clearing customs because the customs form instructs one to declare anything other than “normal baggage”, by which they mean (agricultural produce aside):

Since I had four cameras with me, I was worried that I might not emerge into the arrivals hall with all of them still in my possession. (By the way, I had deliberately and reluctantly decided to leave the drone at home exactly because of this possibility.)

So, we landed and queued:

However, there were many people on hand to speed the queue and……the contents of my bags were completely ignored and we were free to go.

It actually took just an hour from landing to walking out into the arrivals area to find a complete absence of drivers waving a card with our name on it. But José turned up shortly and so we were smoothly transferred to our hotel, the Cumbres Lastarria, which, this being 11am, didn’t have a room ready for us. So, with four hours to kill, the obvious thing to do was to blunder about Santiago. The weather was conducive to this idea, being sunny, blue skies and mid-twenties. Tourism has its own rewards, sometimes.

This enabled us to find our final set of queues for the day, as we decided to visit Cerro San Cristóbal (a nearby and substantial hill recommended by a neighbour). It turned out that we were not the only people to have this idea, and so barely an hour later we were on a funicular railway creaking and clanking our way to the top. As we went up, it became increasingly clear that we would have a pretty spectacular view over the city:

And, while the view from the top was pretty spectacular

being British, we had to hasten to join the next queue, for the gondola ride across and down the far side. To be honest, although the view from this cable car was pretty nice, I’m not entirely sure that it is worth the extra money. But you do get a view of Chile’s highest building, the Costanera centre (also, we’re told, worth a visit, as the view from the top is good – it’s 74 stories tall) 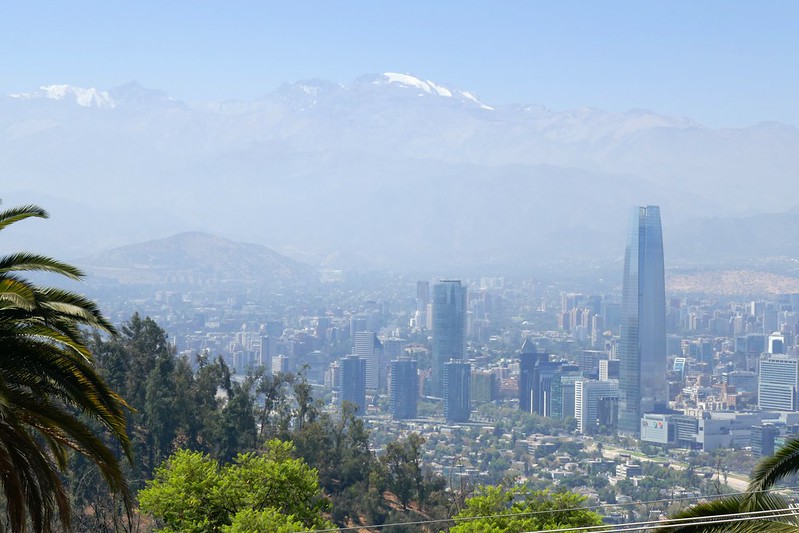 Whilst up the hill, the searing Chilean heat persuaded us that we should try a traditional drink, called Mote. Since this is nearer a meal than a drink, I can only hope that people don’t give me too much stick for publishing a photo of one. I suffer for my art: 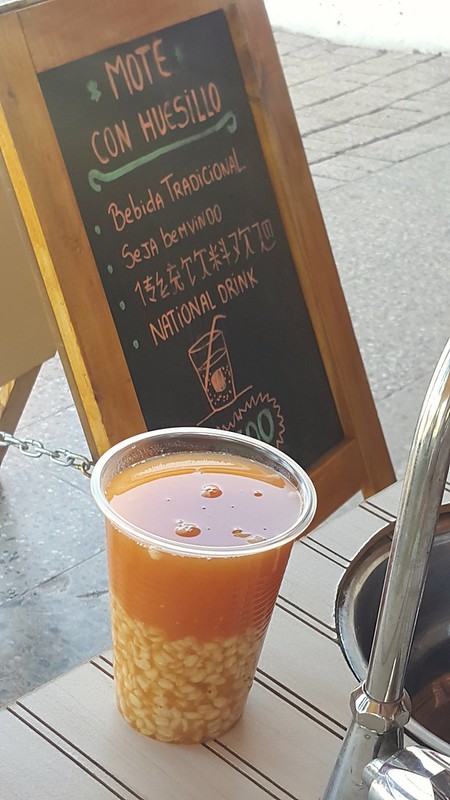 On the subject of food, we indulged ourselves in some local dishes at El Galeón, a restaurant near the central market in Santiago. Reineta a la plancha is a grilled offering of Chilean sea bream, and Pastel de Choclo is not a chocolate tart, but a very nourishing (i.e. substantial) offering based on sweetcorn (which is called choclo around these parts) and chicken.

Our final set of queues came about the next day, as we endured the torturous city traffic with a very nice guide called Ronald Aylwin Lyon (Chilean, but of British heritage five generations before, and an occasional guide, since he has an alternate life as a pianist, composer, teacher and jazz musician). However, the day before had seen a new President, Sebastián Piñera, taking office, and the official celebrations meant the closing of several key roads in the city, and the ramifications mainly took the form of huge traffic jams. Eventually we abandoned motorised transport and walked about on foot, which enabled us to see the lovely architecture in the city’s Concha y Toro neighbourhood (yes, it’s named after the family who make the wine). 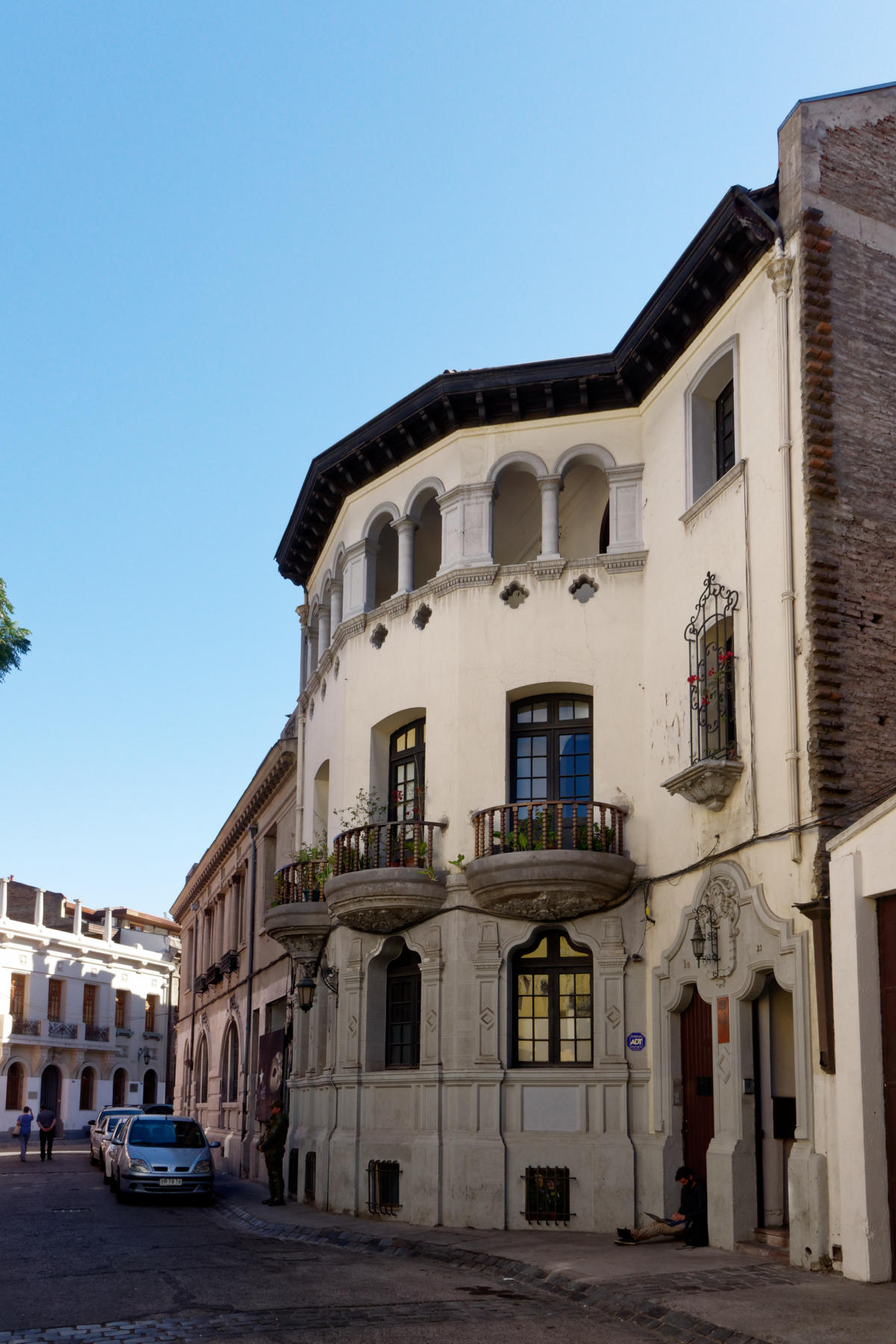 although it’s clear that the local tendency for earthquakes means that those buildings which survive need bracing. 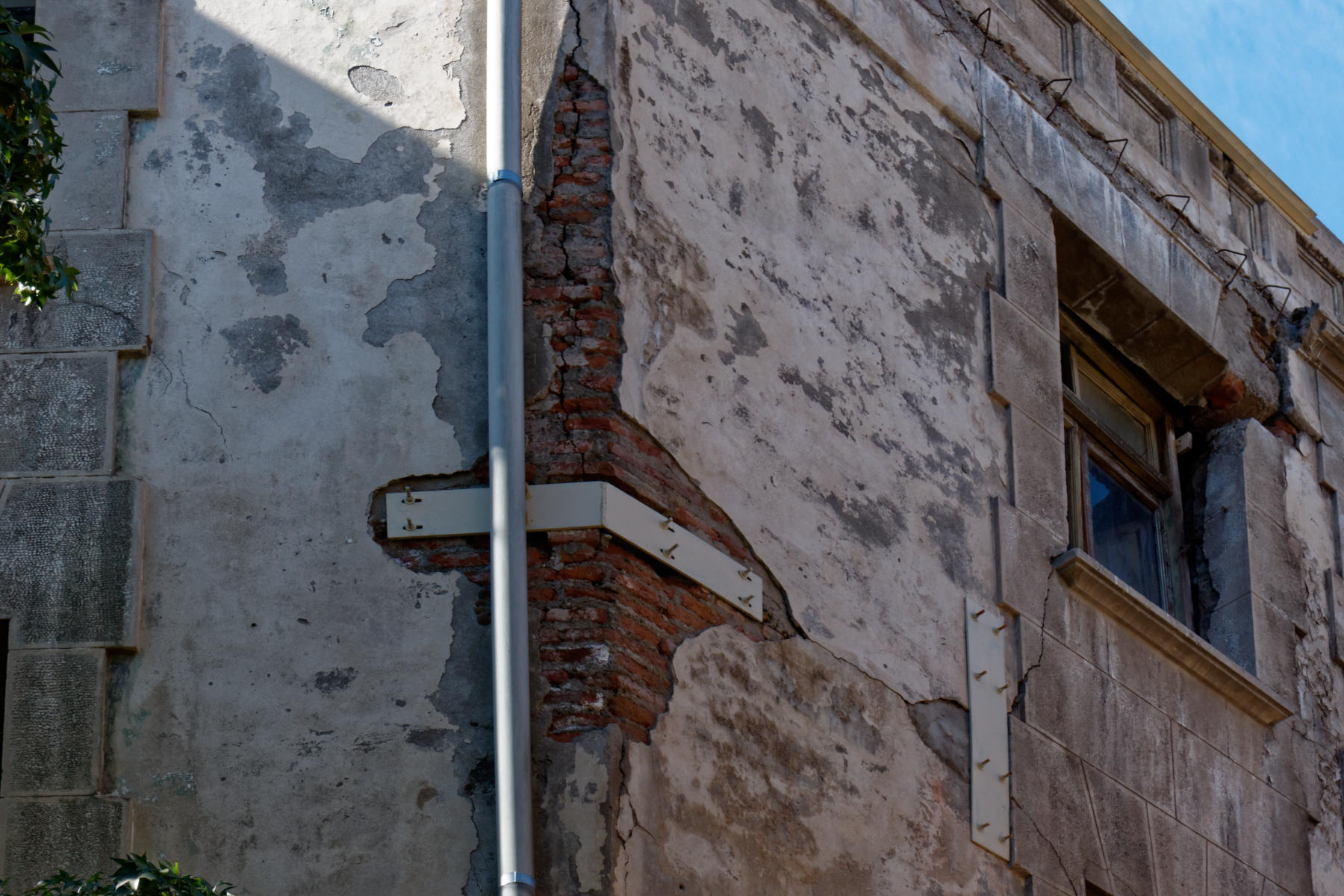 Uniquely, among all the various places we’re visiting on this junket (stay tuned, now), Santiago is the home of the brother of a neighbour. We went to visit him and had a very pleasant evening drinking wine (Chilean, of course) and talking about the country; this also afforded us the chance to explore how to use the local metro, which is very cheap and quite easy to use. The best thing to do is to get a “bip” card, a smart card which you can charge with money so that it allows you through the barriers with a cheerful “bip”.

As you walk about the city, among the humdrum graffiti (of which there is plenty, some of it with artistic merit), you can stumble across hugely colourful murals and other striking wall paintings.

And we also walked around the downtown area where there was palpable excitement about the possibility of the new President passing a parade of many military bands, who had gathered for the occasion. 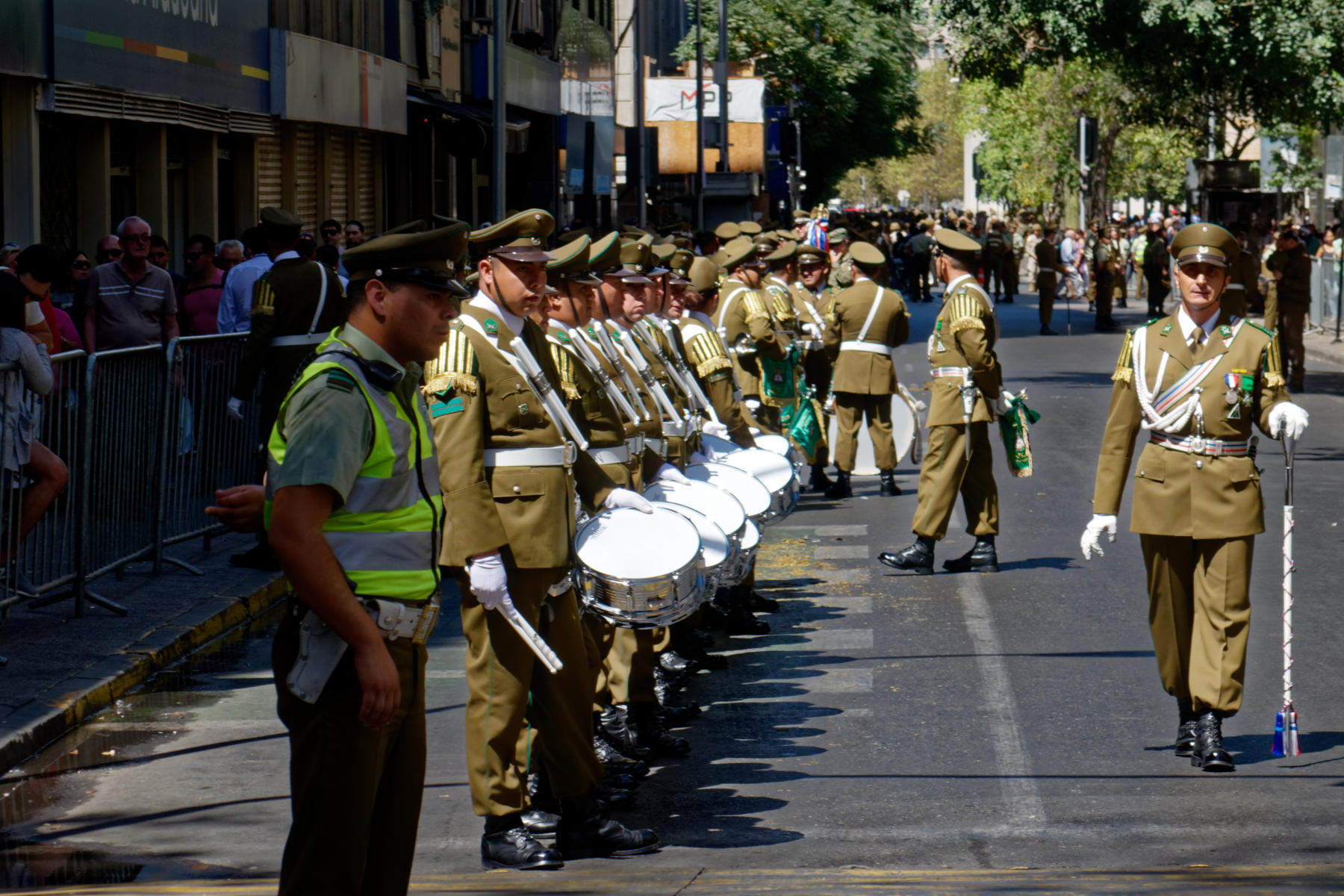 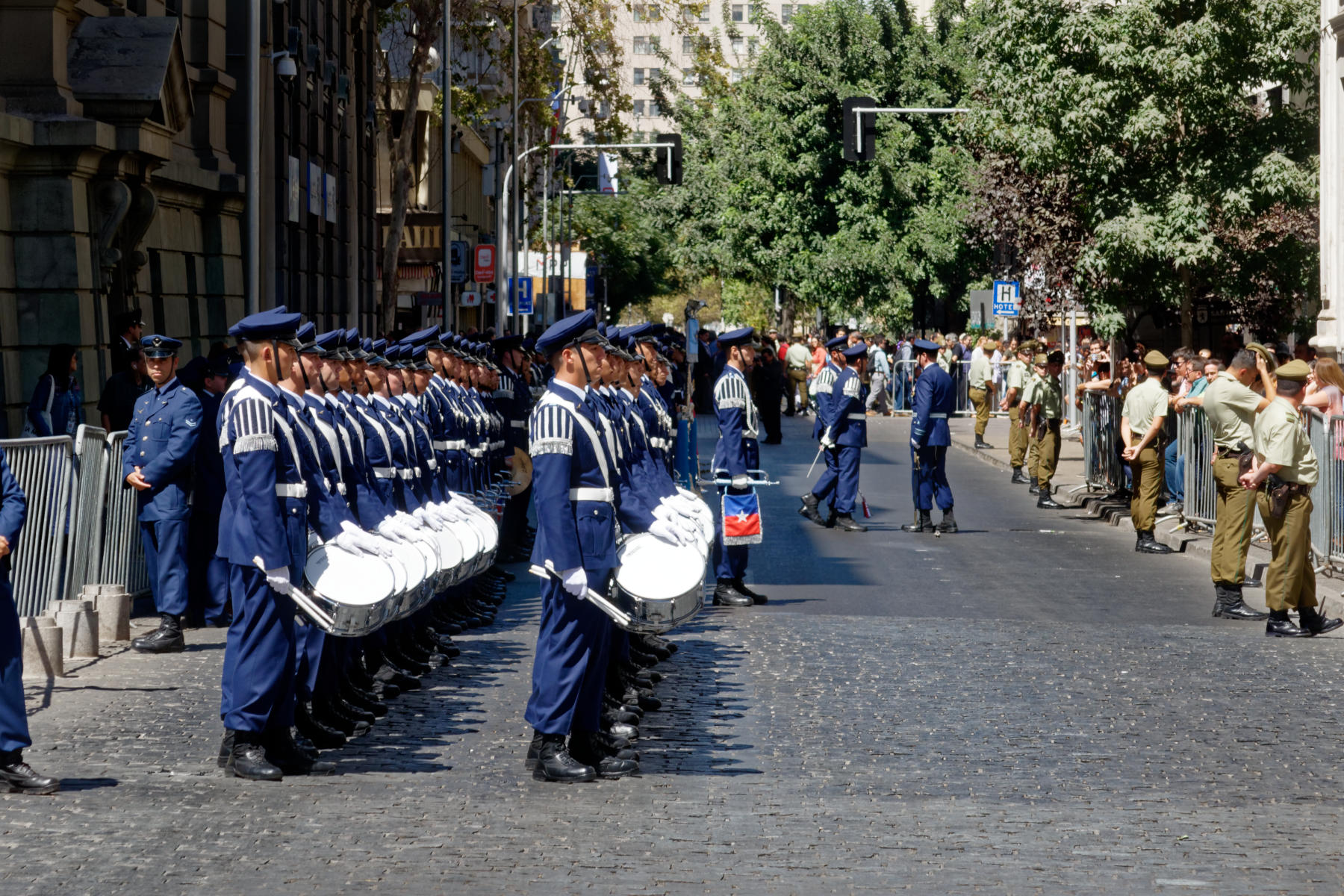 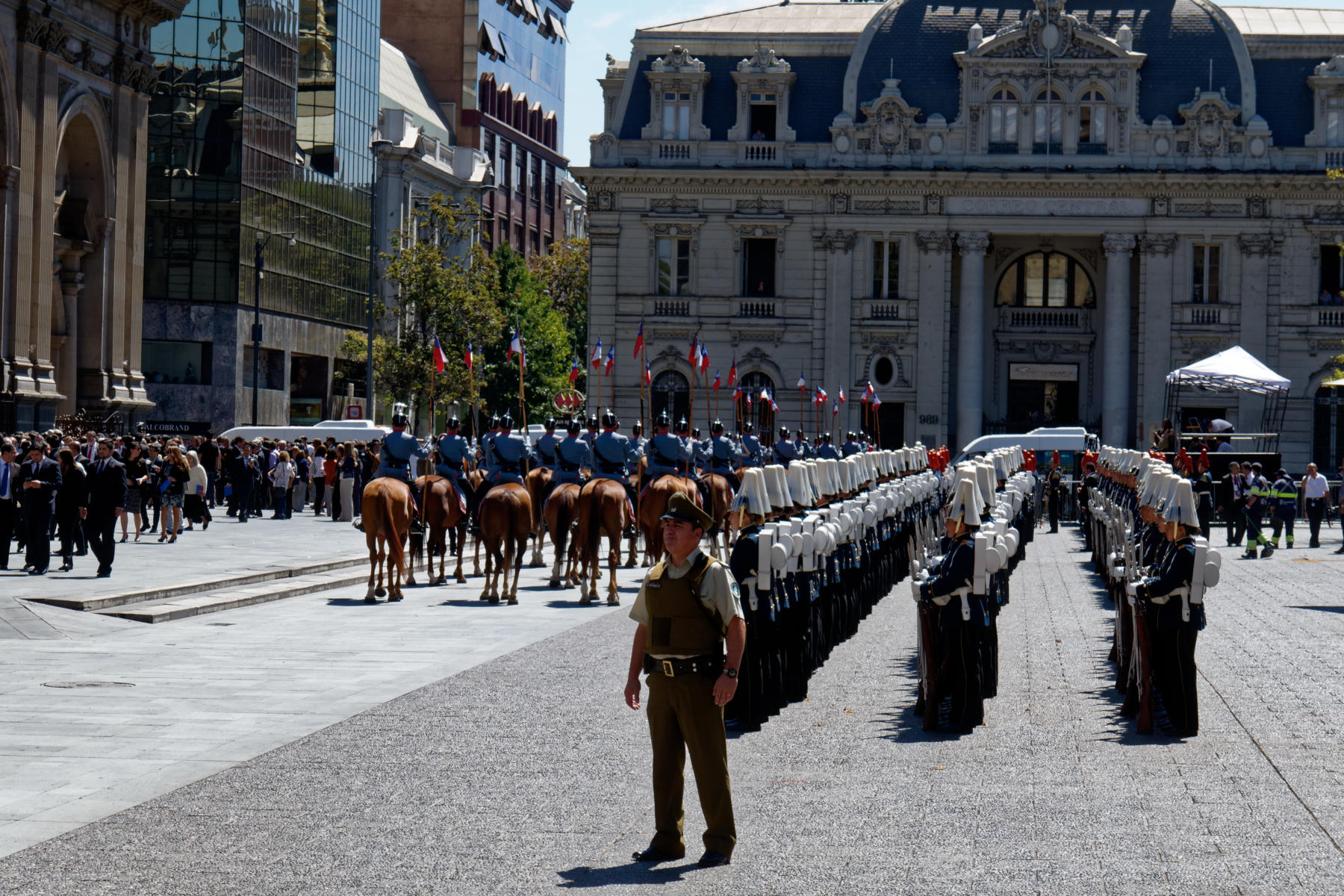 Around our hotel, in the Lastarria neighbourhood, there is some lovely mural art and architecture. 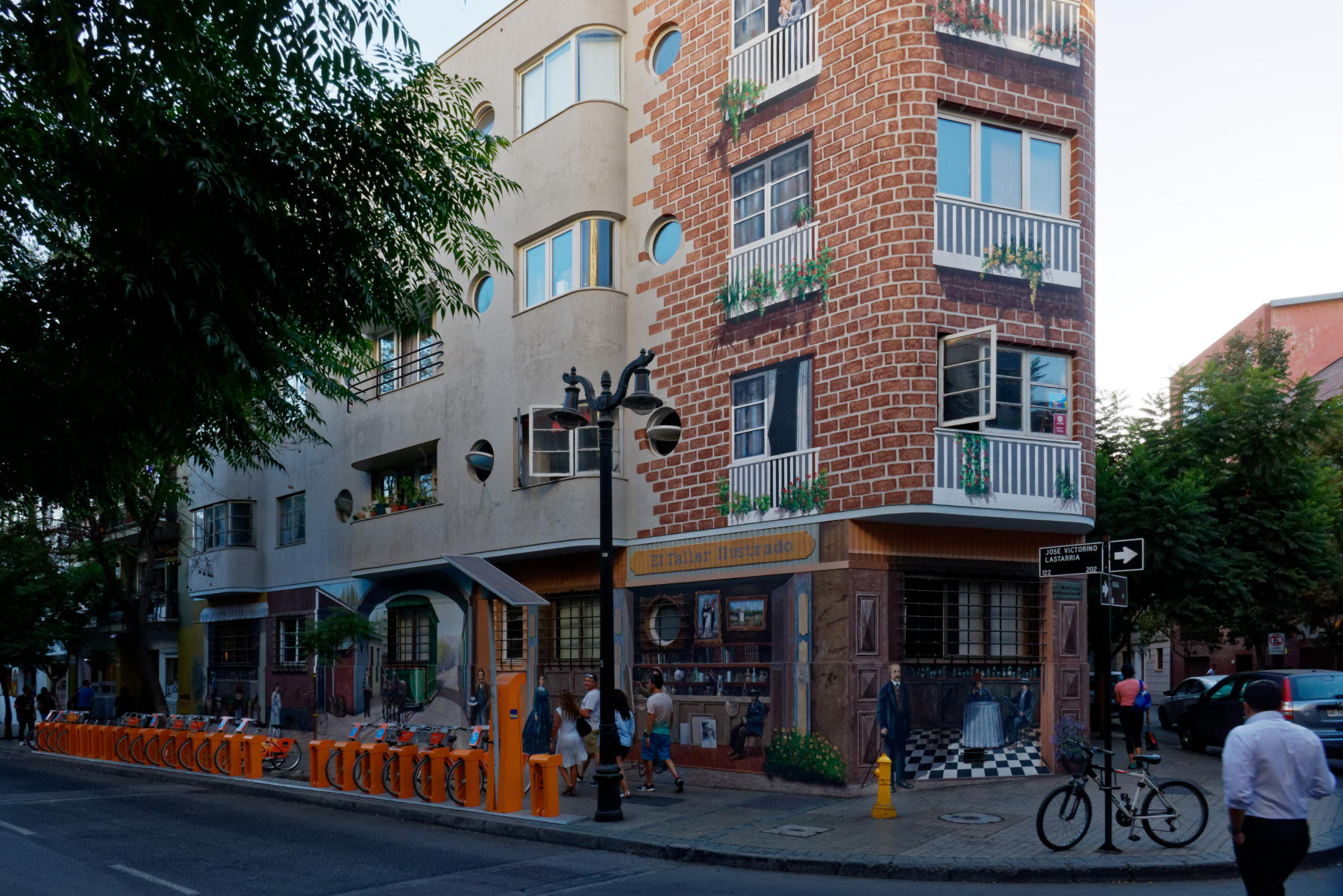 And that’s about it for the first instalment of our holiday adventure. I hope it gives you a flavour of how much we’ve enjoyed our short stay here, and stay tuned as we plunge south to Patagonia and Tierra del Fuego.