This is definitely, positively, the last post before we depart for the Galapagos tomorrow. But we had a chance to wander around in Guayaquil, Ecuador’s largest city, before we flew out, and so here are a few snaps I took as we wandered about.

Before we got here, though, we had some amusing moments. The lady who sat next to me on the plane had brought her dog with her, something I’d never expetienced before. It was very cute and very well-behaved: 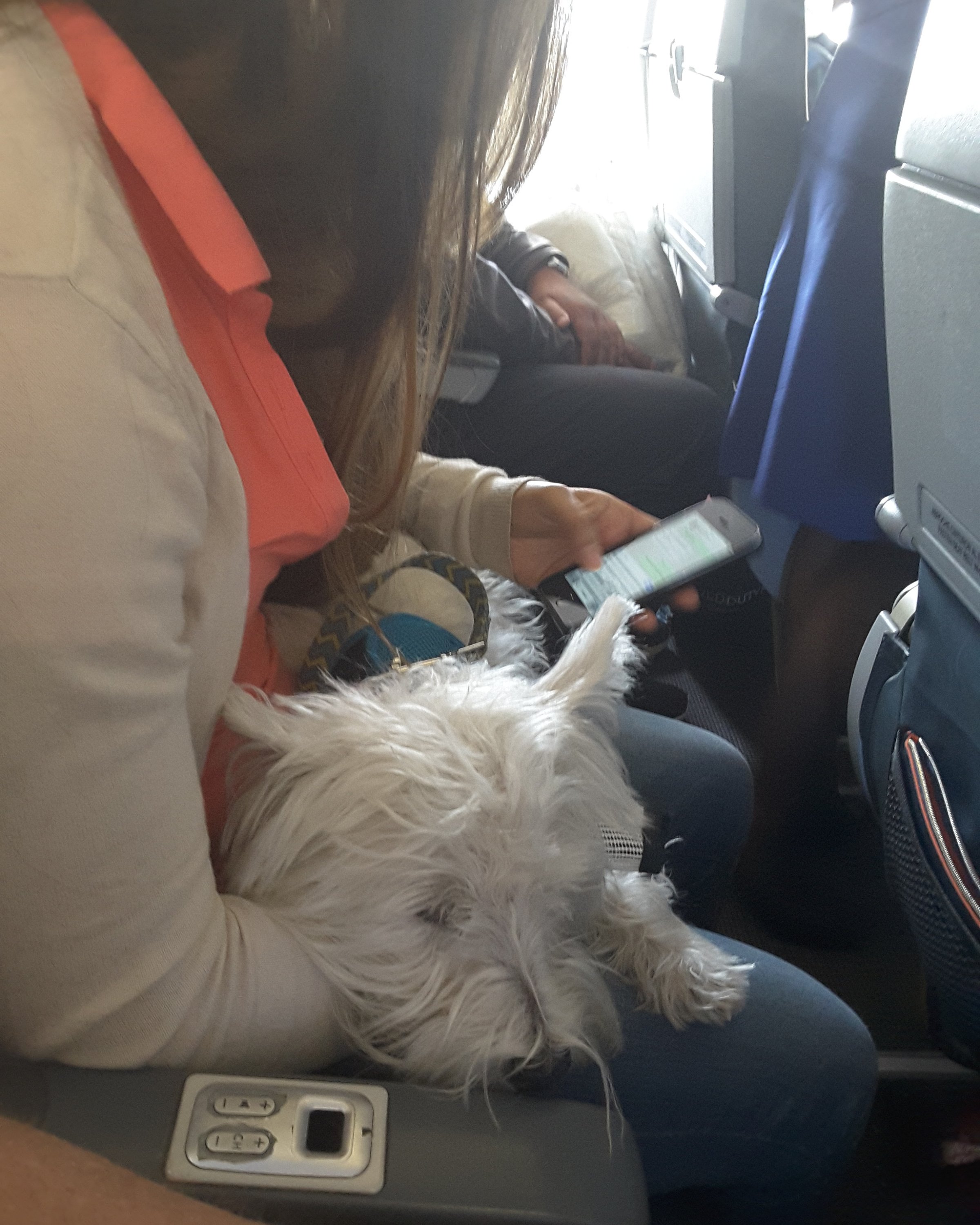 and Jane took this photo of a dog which was just lying quietly among the incoming people in the immigration queue. No-one paid it any attention and it responded in kind. 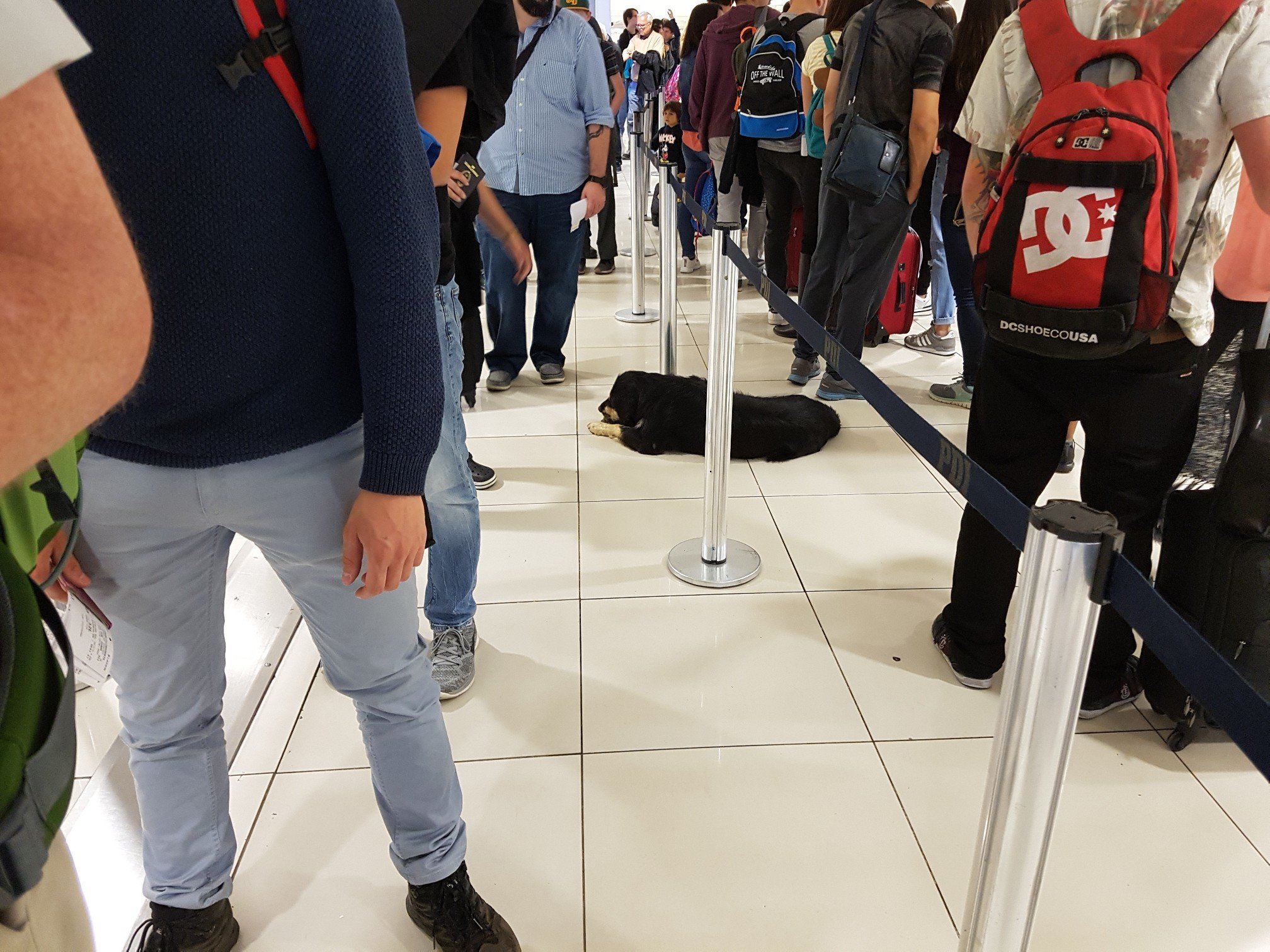 Even before we got to Guayaquil, it was clear it was an interesting place. Jane took this photo from the aeroplane, and our taxi driver later told us that it was of rice fields to the south of the city. 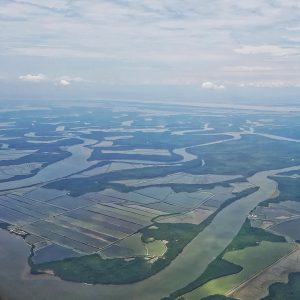 I would never have automatically associated Ecuador with rice, which just goes to show how much I know.

We were billeted in the rather posh Wyndham hotel, which is handily placed to explore Guayaquil’s waterfront area and the well-known tourist attraction hill, Cerro Santa Ana, to climb which takes 444 steps (the authorities have kindly numbered them). Climbing them, you get a good sense of the buzz and colour of the place. 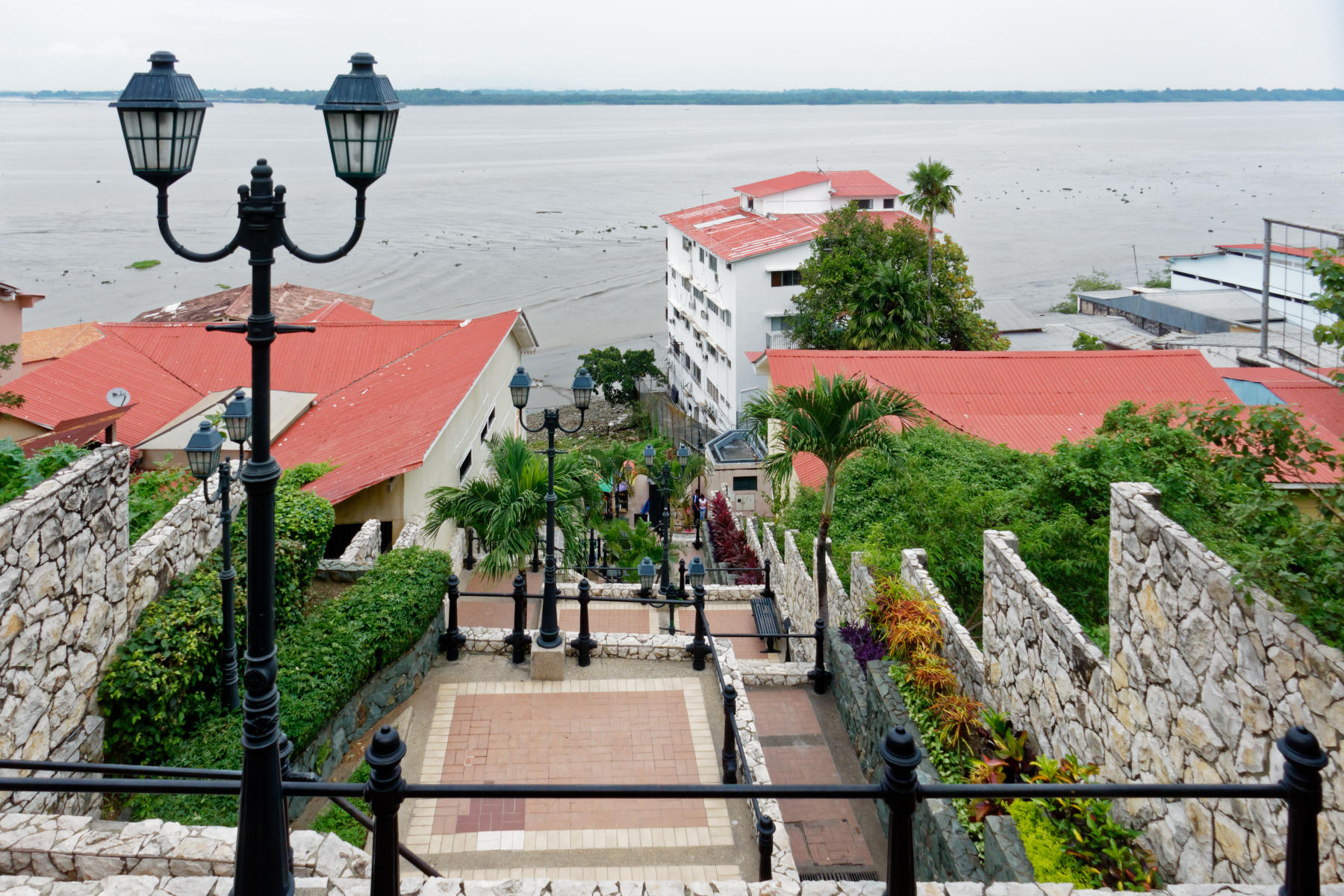 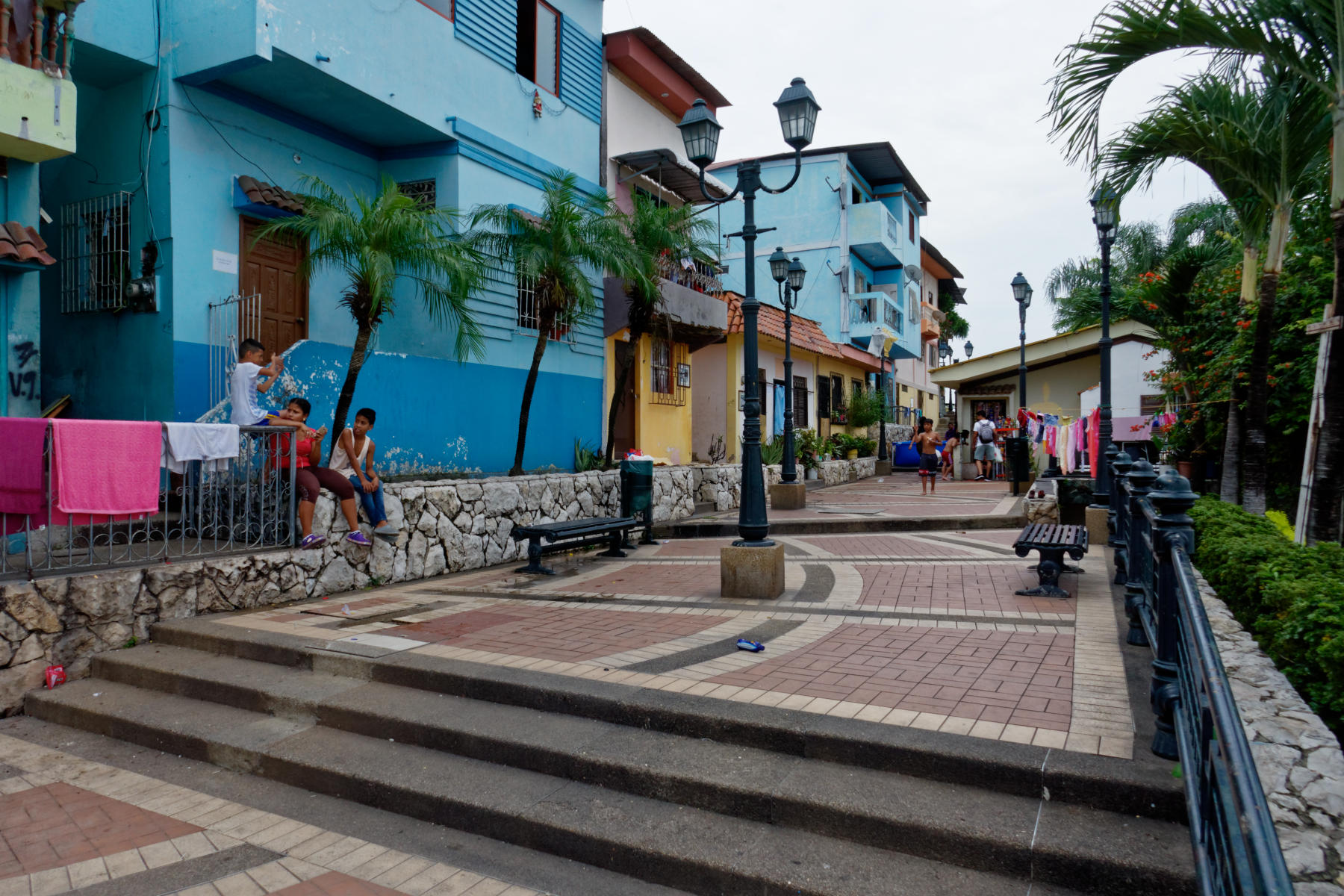 It’s a steamy, hot place and the locals even set out small pools for kids to take a cooling dip in. 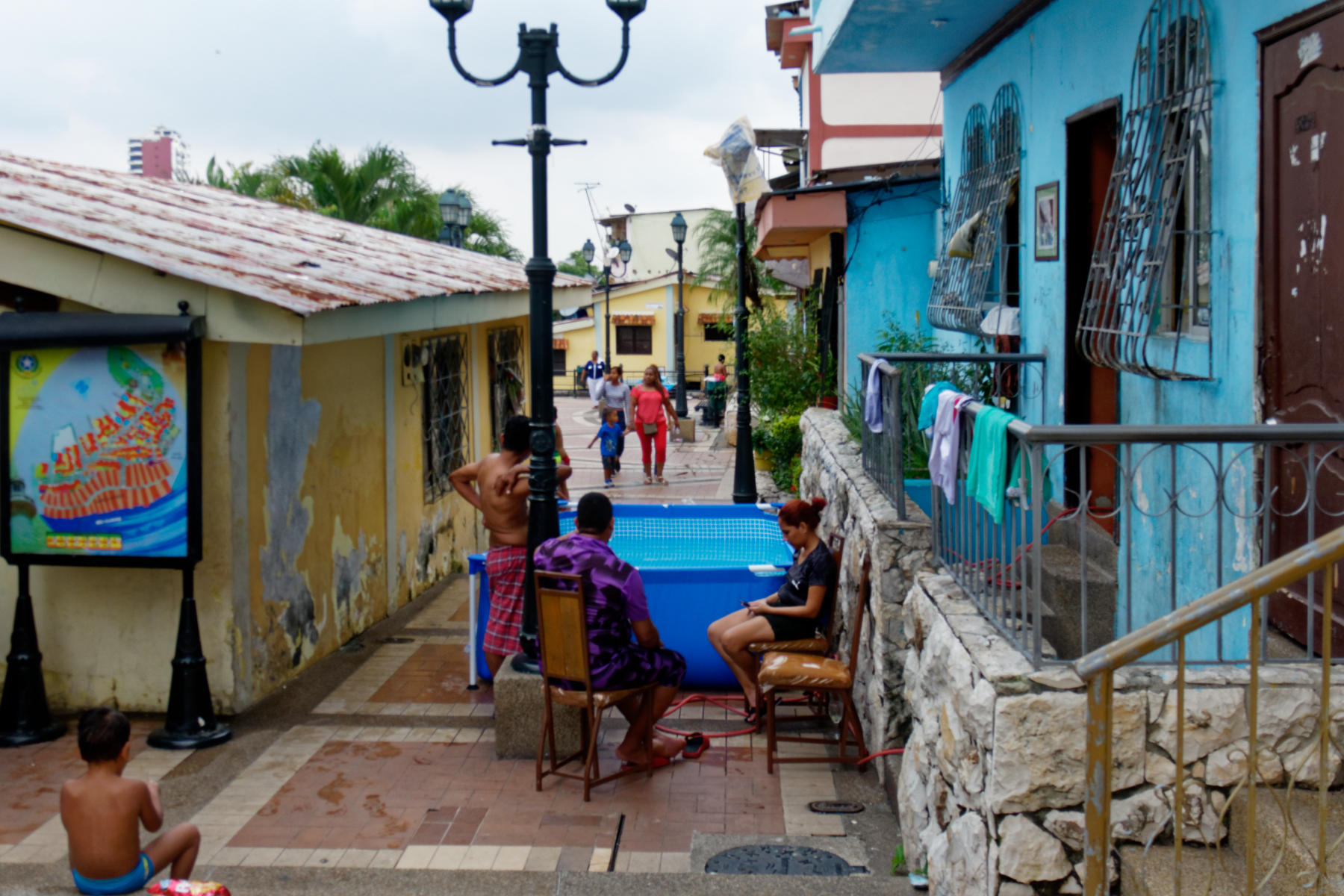 At the top, you find the well-known lighthouse 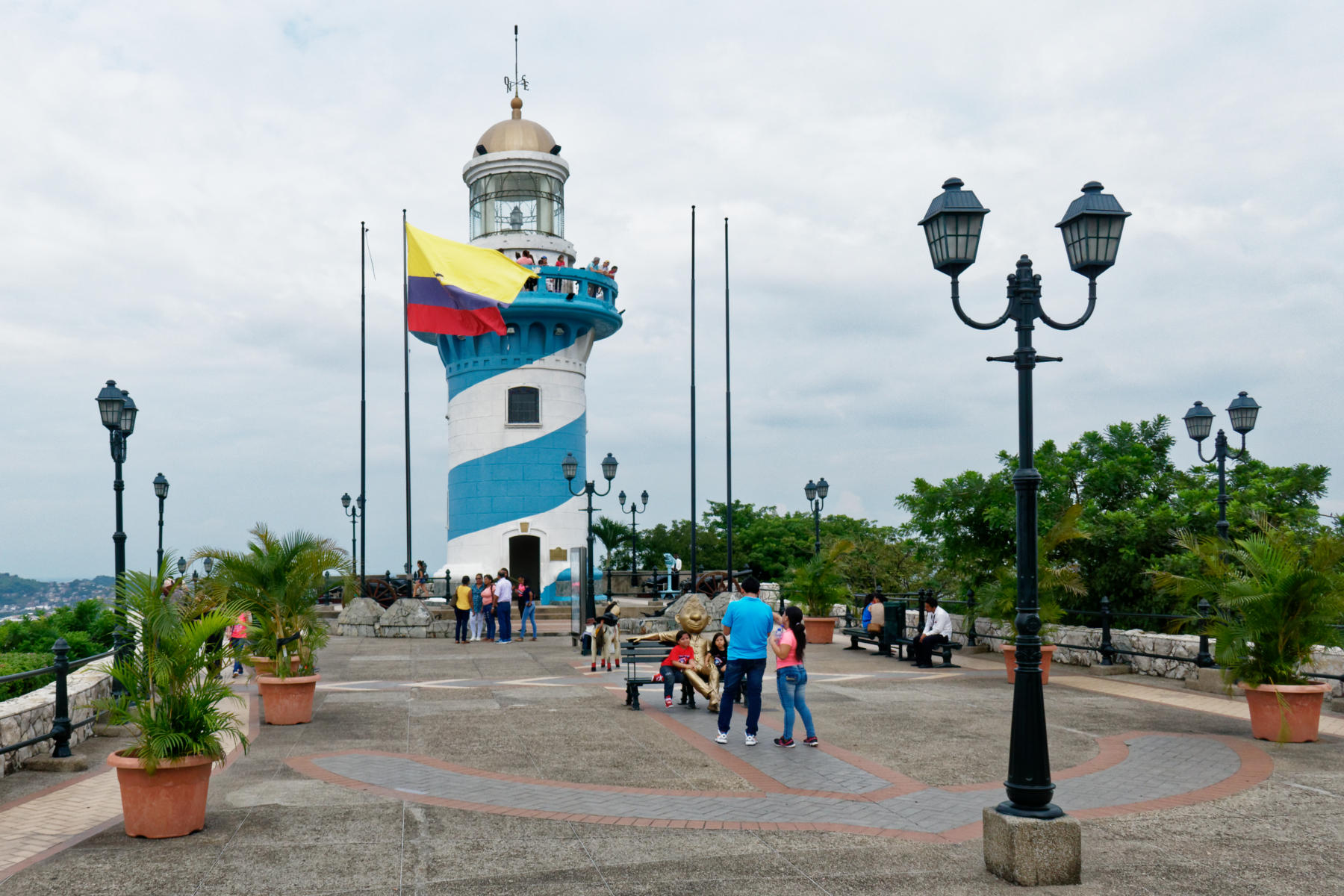 and some good views, like this one over the neighbouring hill, Cerro del Carmen. 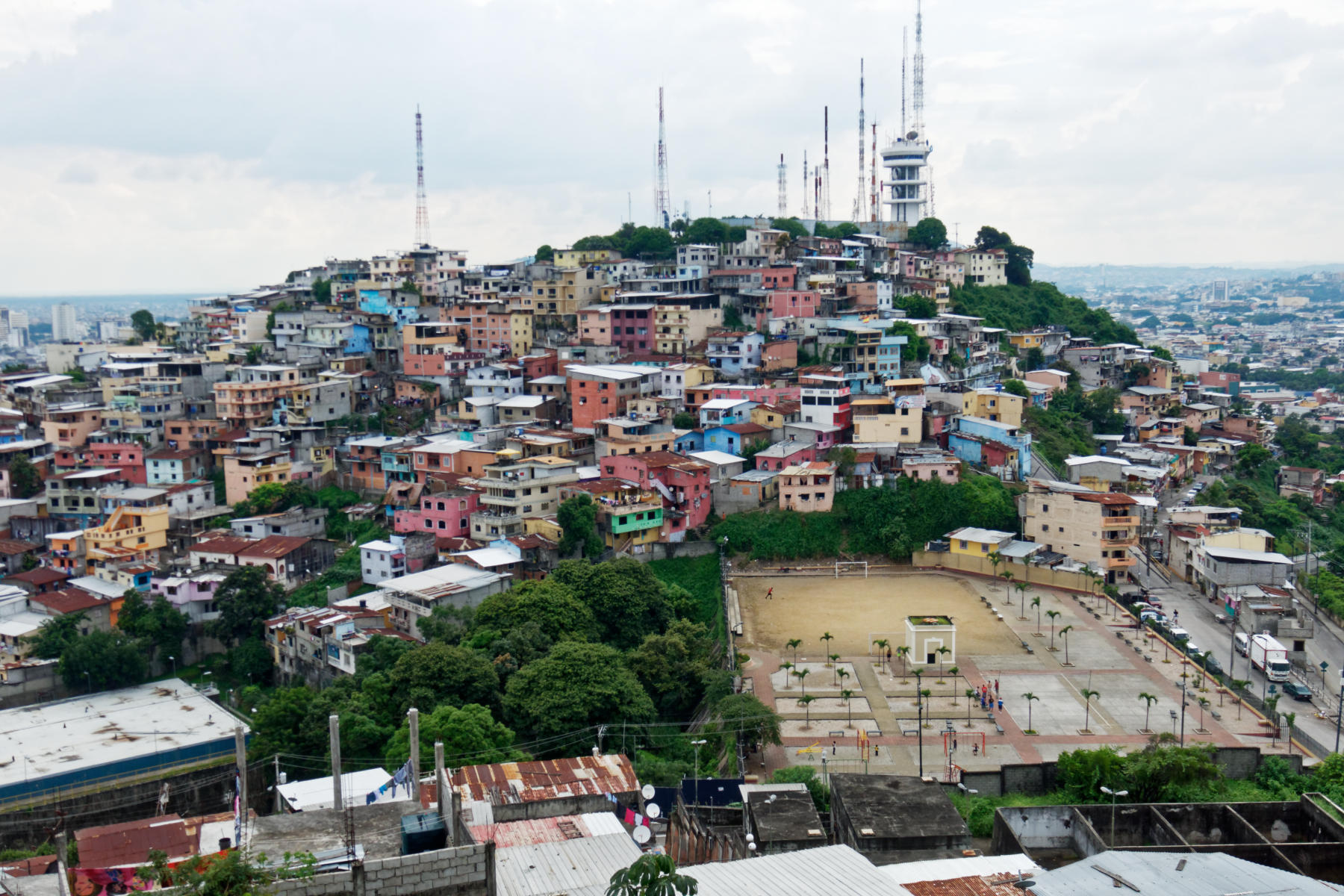 And you can also see over the local waterfront area. 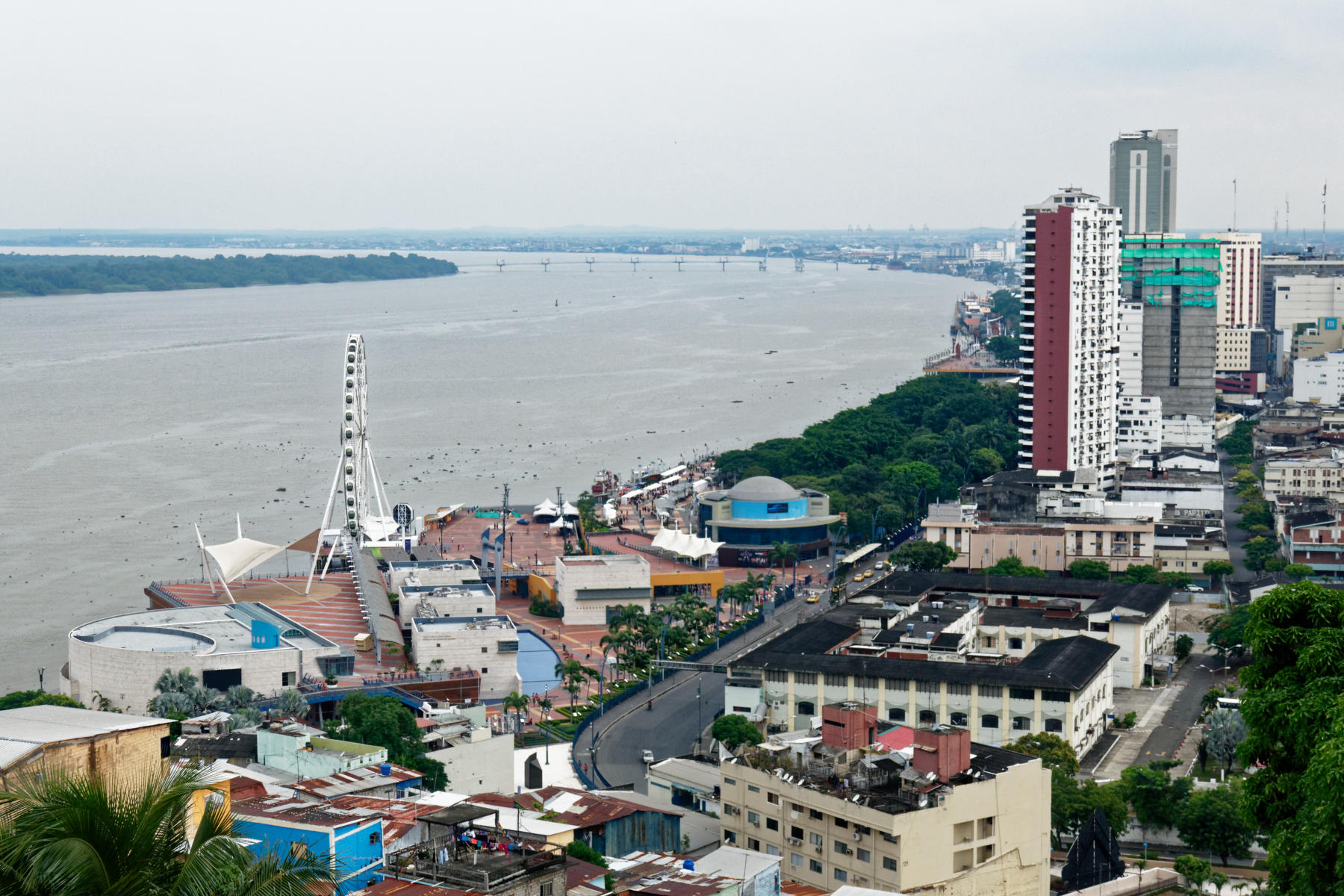 We wandered back down the hill and along the waterfront, which was noisy and crowded, and full of holiday atmosphere. 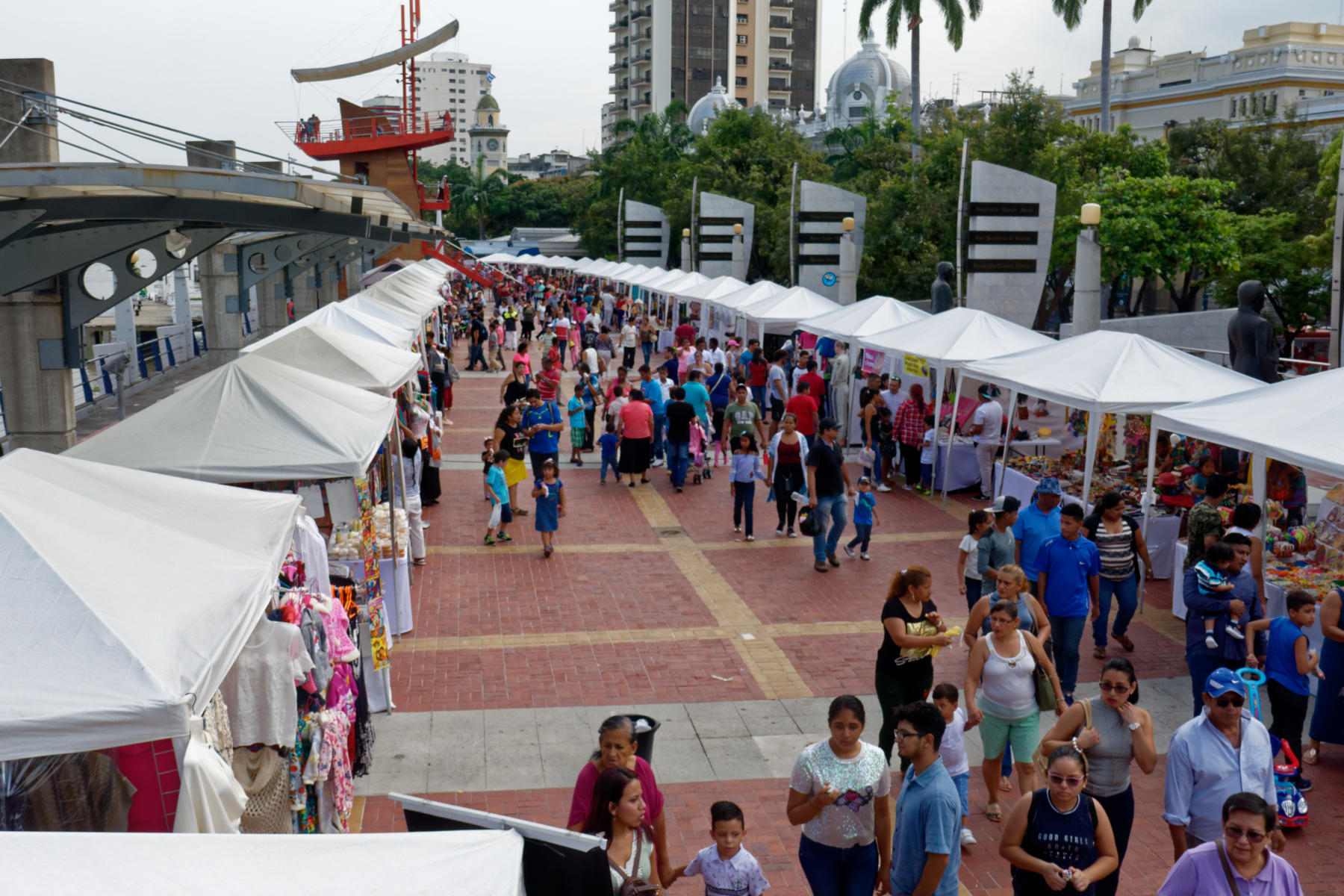 and ended up in the Parque Seminario, just in front of the cathedral. The park is also known as the Parque de los Iguanas, for a very obvious reason.

We stopped for a (very) late lunch in a restaurant called La Canoa and then wandered back in the gathering dusk, which provided a nice view of the town hall. 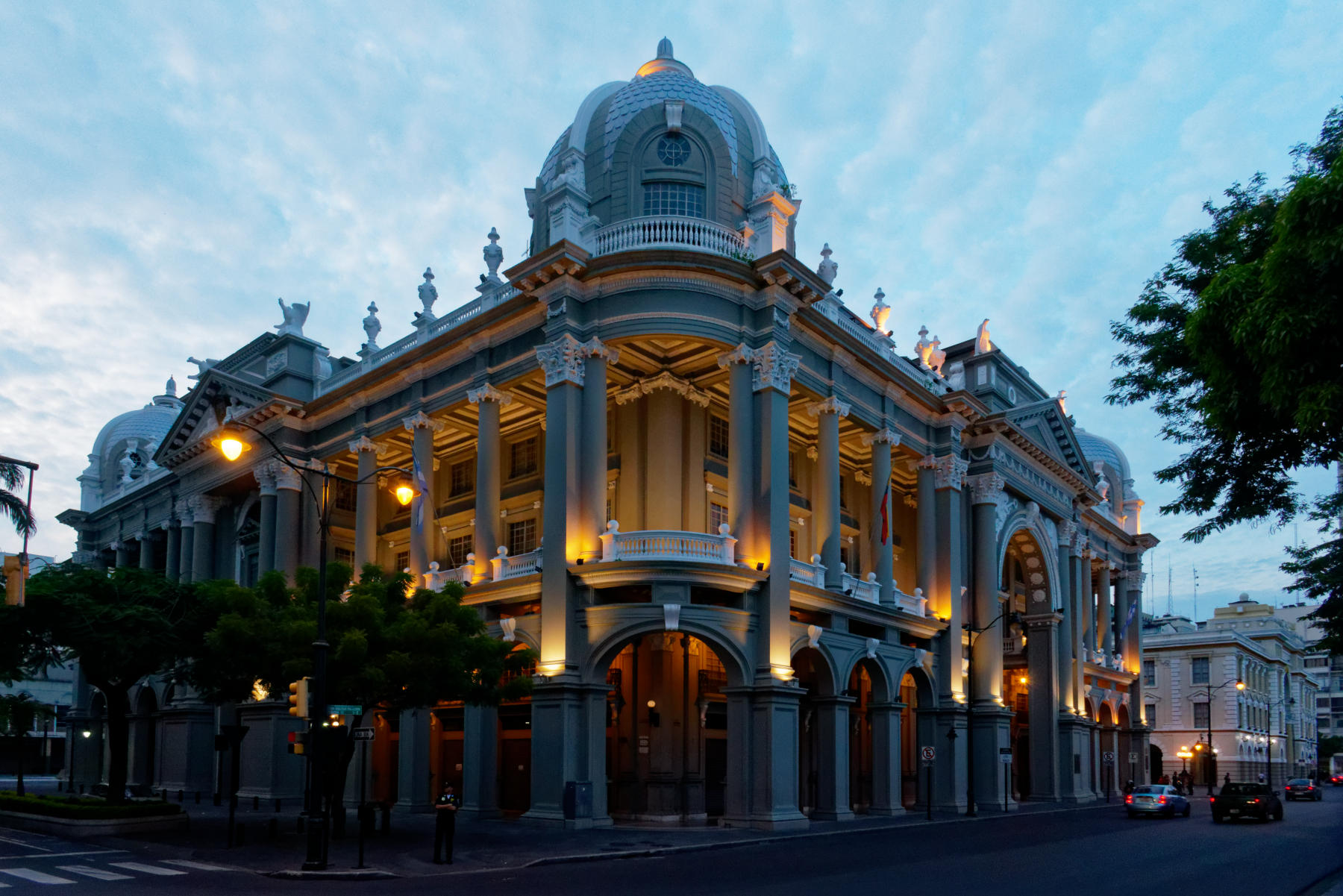 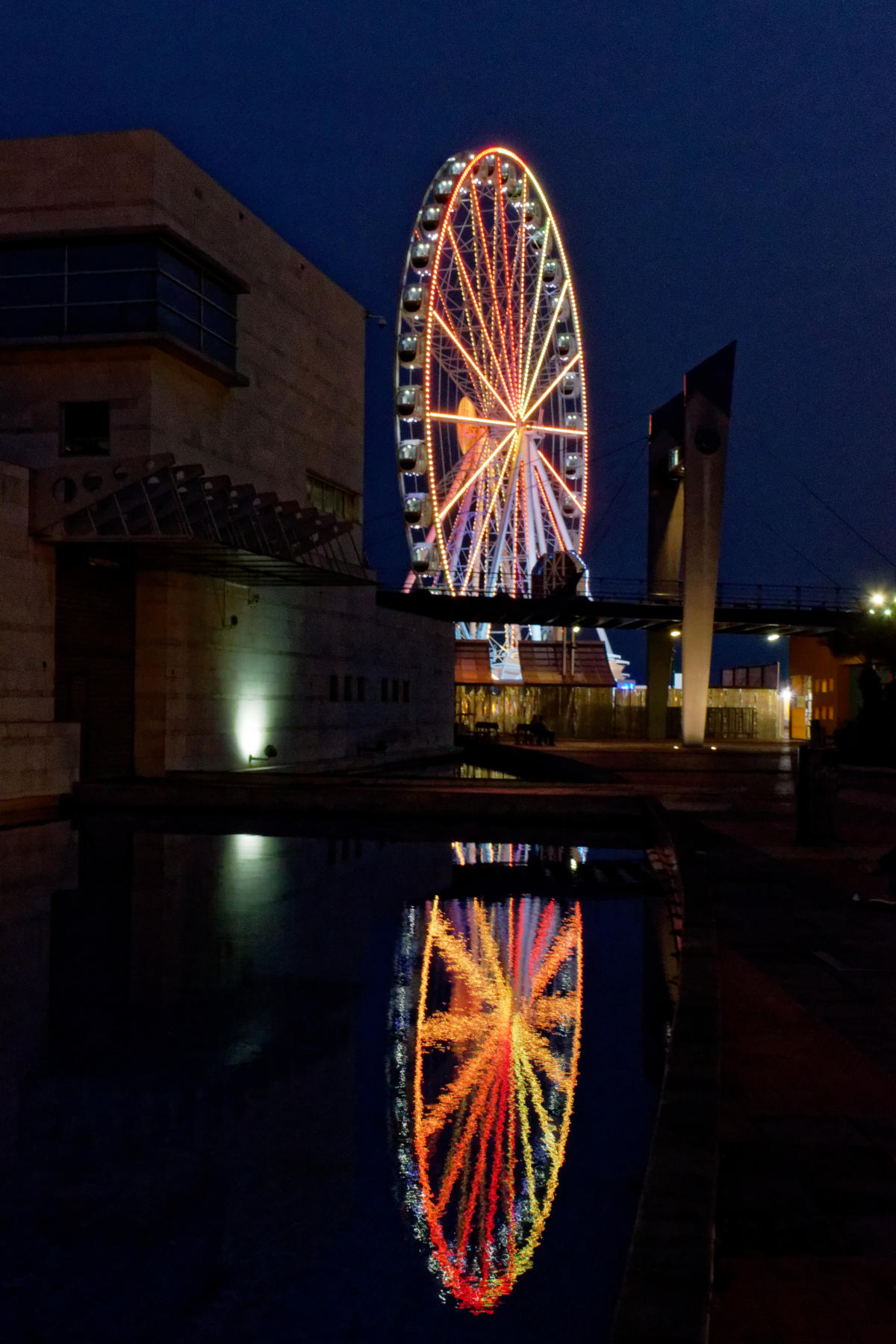 and of the Cerro Santa Ana in the evening light. 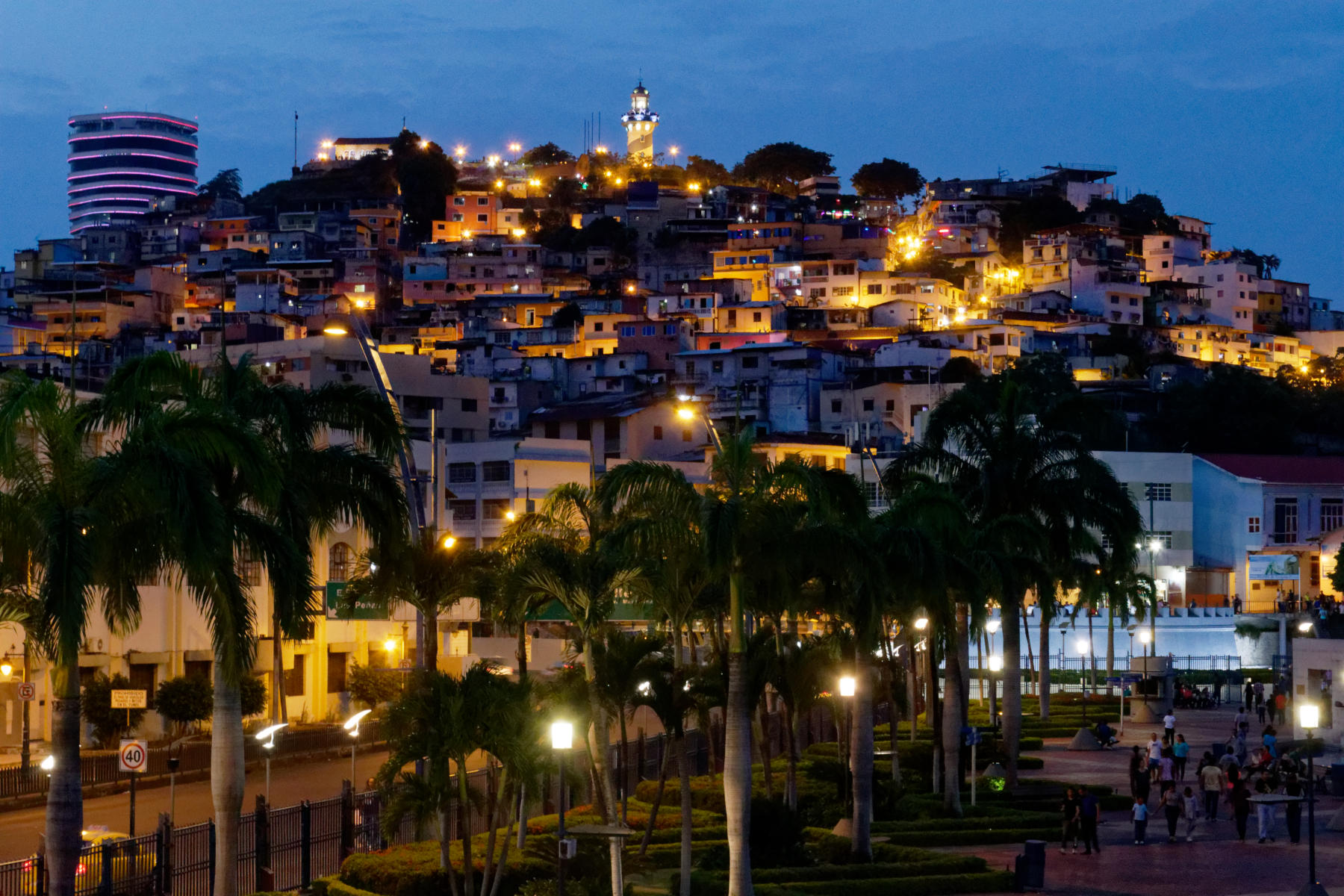 So we didn’t have a lot of time here, but I think that Guayaquil gave us a good introduction to Ecuador, its people and its climate. I hope that we can acclimatise to the steamy heat and enjoy our time in the Galapagos. Watch this space to find out!