Sunday 11th July 2021. The plan for today was Golden Circle day. This is basically the route that tourists who are based in Reykjavik can use to see The Sights, the main ones of which are Geysir (water goes up), Gullfoss (water falls down) and Þingvellir National Park (water stays where it’s put). We expected to tick those boxes in pretty short order before retiring to the bar in our Reykjavik hotel for a G&T before some kind of extravagant dinner. We ticked the boxes all right, but the day didn’t quite work out like that… in a good way.

Our extreme good fortune with the weather didn’t hold, and we had a grey, windy and occasionally wet day, with the sort of driving drizzle whose ubiquity has probably earned it a special Icelandic name. It didn’t interfere with our enjoyment, but it’s not the weather that a photographer would normally choose.

Before we got to the major part of the box-ticking exercise, Dagur took us to the cathedral, just down the road in Skálholt. 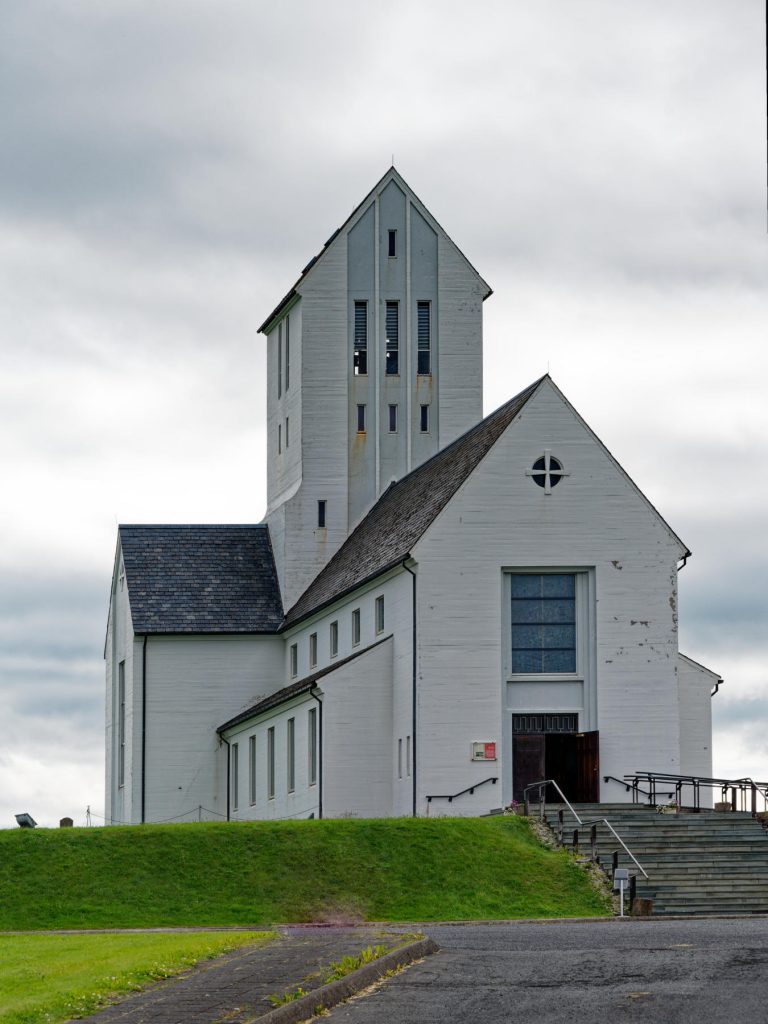 Skálholt has a major place in Iceland’s history. It was an episcopal See, a school, a seat of learning and administration for more than 700 years and a place of pilgrimage in medieval times. The present Cathedral was consecrated in 1963 and is the 10th church standing on exactly the same site. In it is a list of all the Bishops stretching from the current (female) one right back to the first one, who took office back before Willam the Conqueror decided he fancied a bit of English rule. It was, unlike most of the Interesting Churches we’ve seen this last fortnight, open, so we went in. It’s a lovely interior. 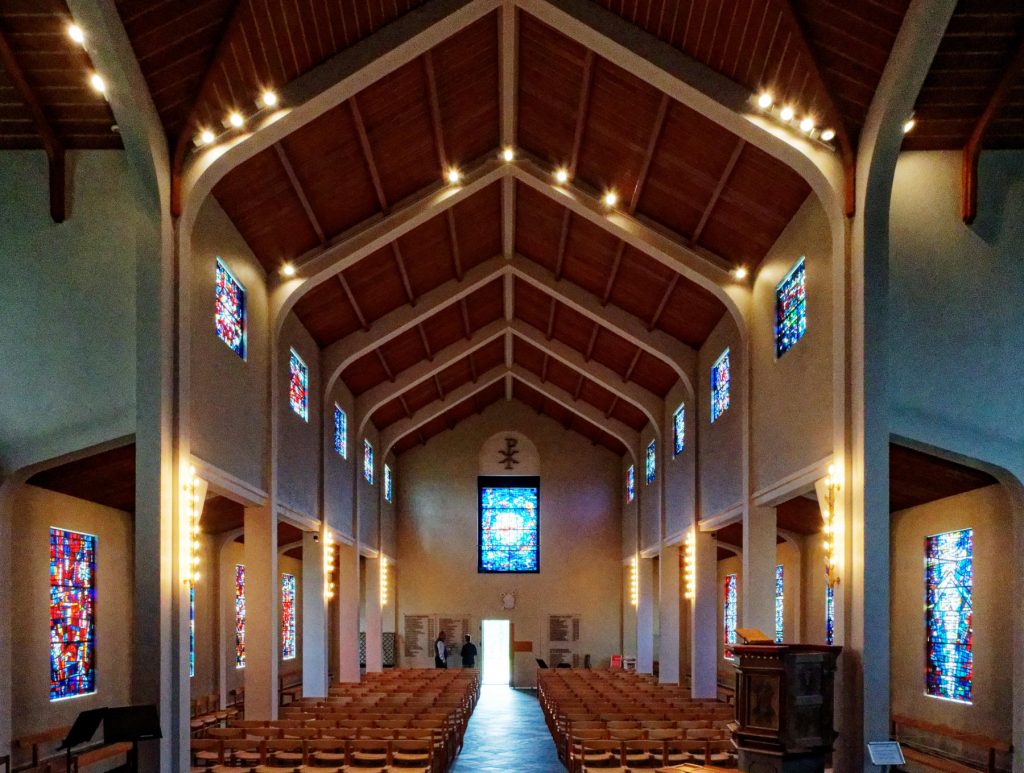 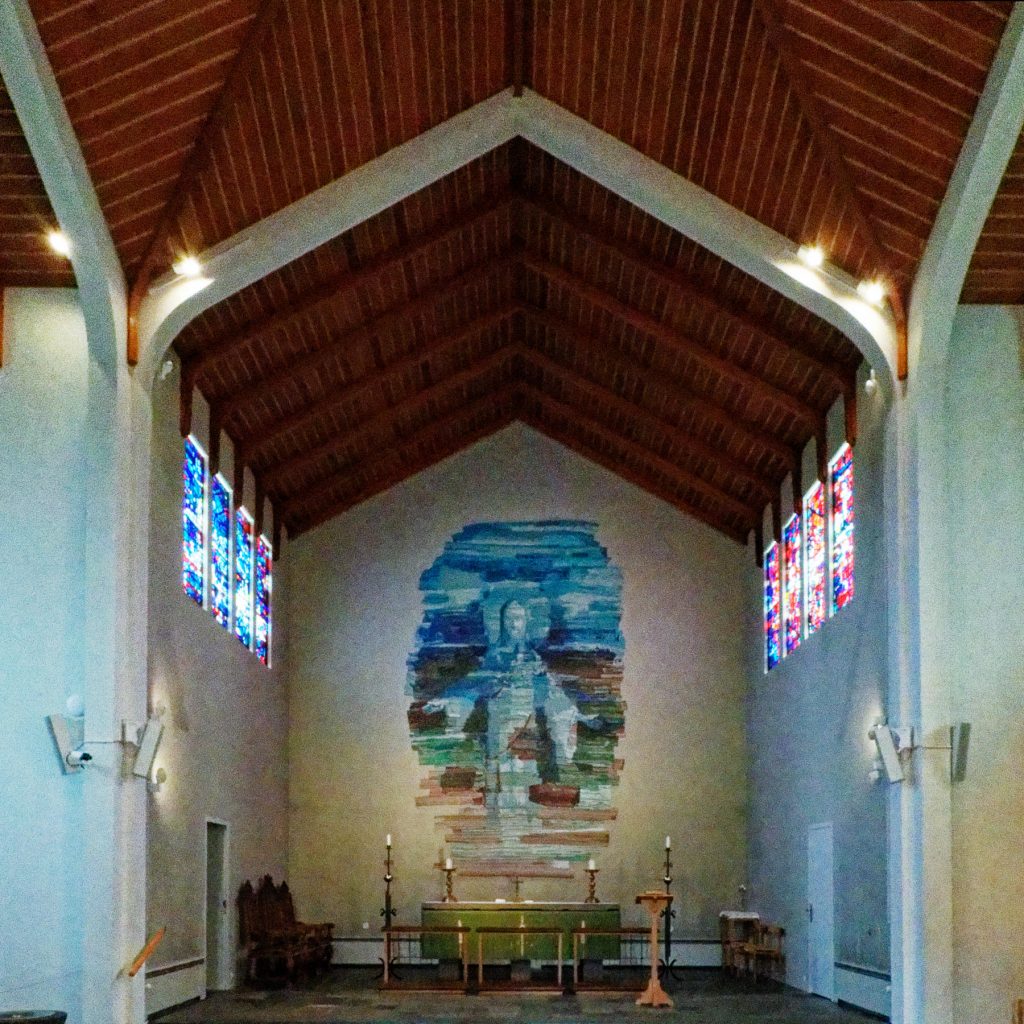 The stained glass is very striking, as is the mosaic above the altar. There’s an escape tunnel to the outside, used both for exit and entry in emergency, e.g. attack by a band of marauding riffs. 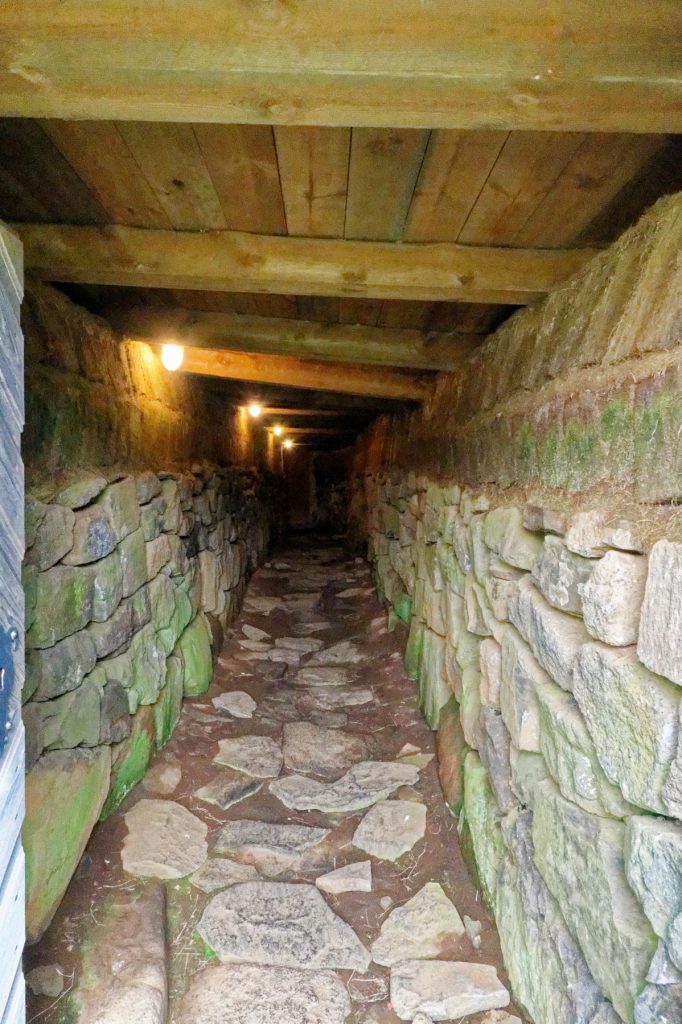 and in the grounds is a replica of the type of house that once also stood on the land. 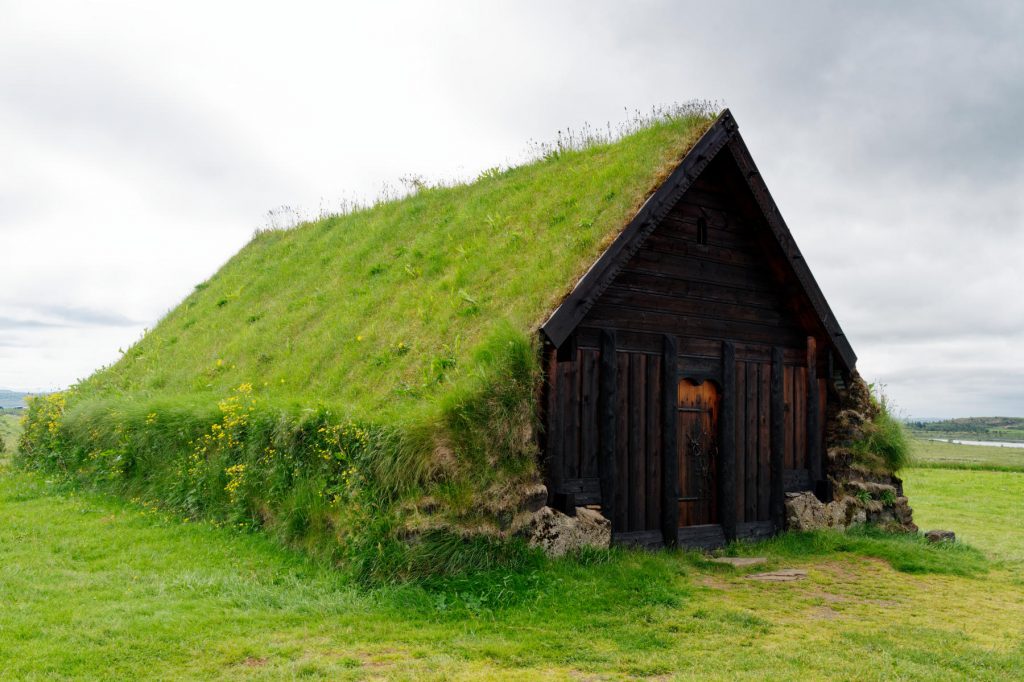 Our next stop was also something that’s not on your normal Golden Circle tour – an amazing place called Friðheimar. To say baldly that they grow tomatoes there is technically accurate but utterly misses the point of how they go about it and the scale of the undertaking . The creators, Knútur Rafn Ármann and his wife Helena Hermundardóttir, have created an environment in which they can be grown year round. 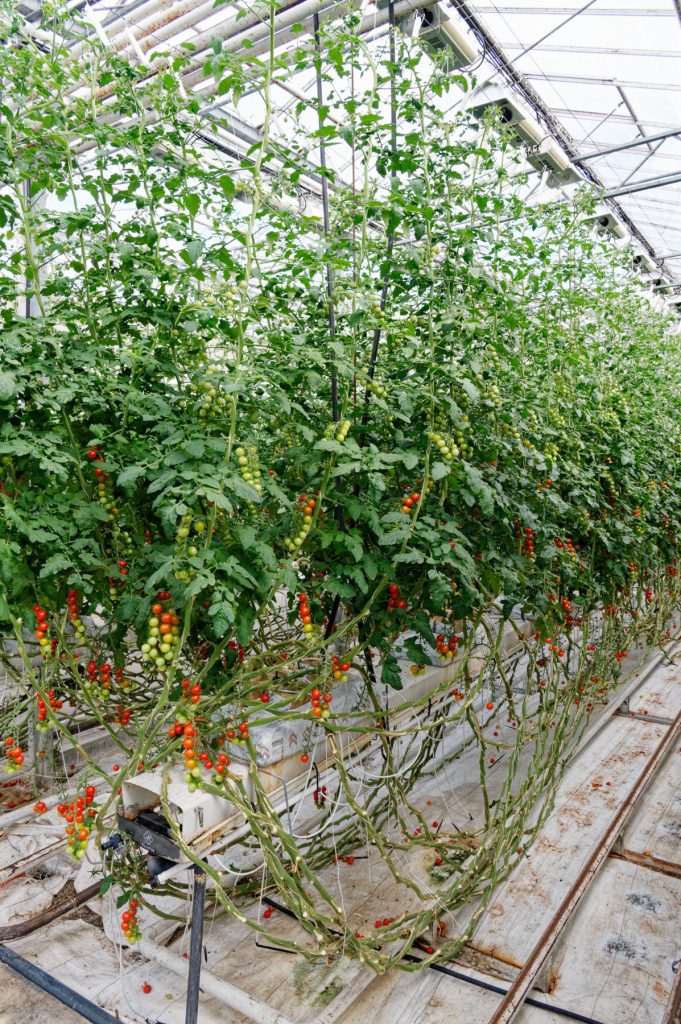 Geothermally heated greenhouses and a carefully controlled growing process ensure that light, nutrients, water and heat get to the plants 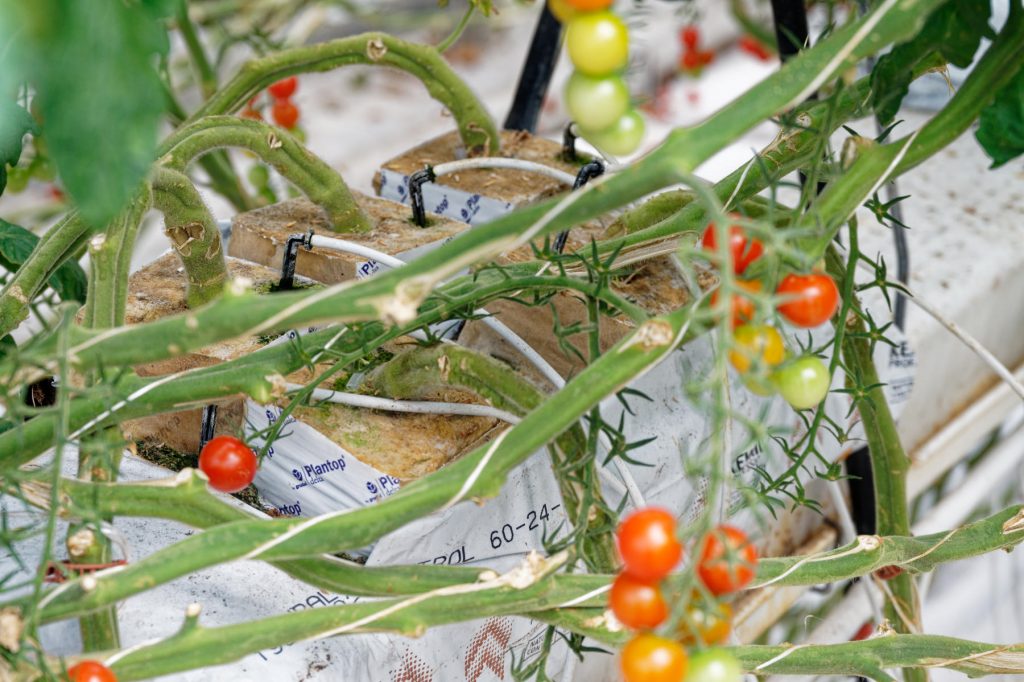 and they keep bees to pollinate them. 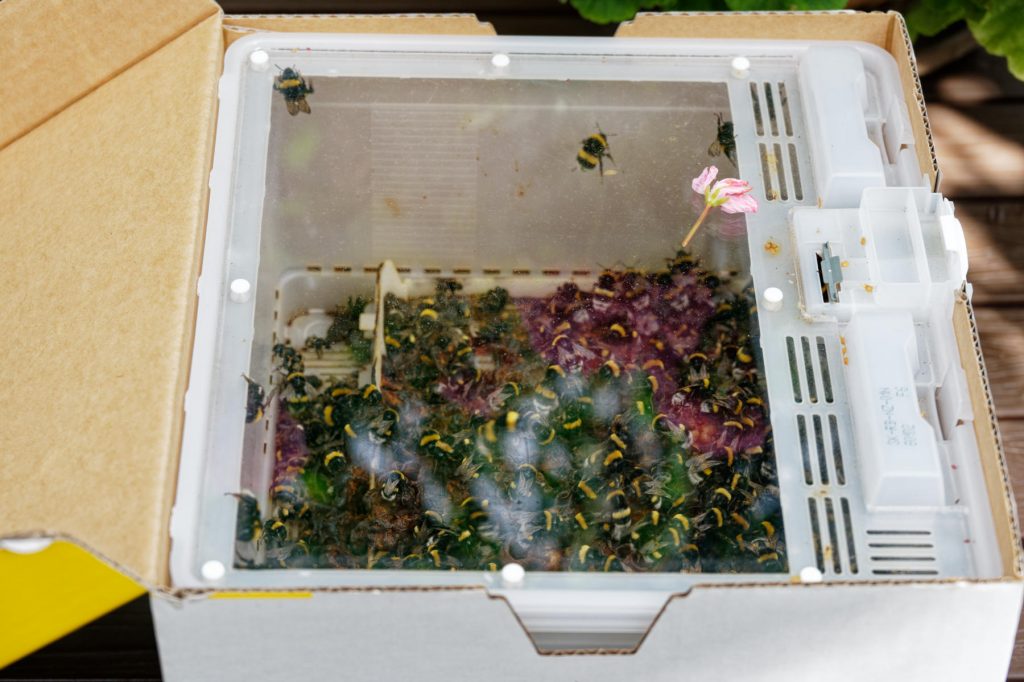 They also, by the way, grow cucumbers and lettuce – over a ton of produce every day of the year – and have even put a restaurant in place so you can eat a meal in the surroundings. It’s rather surreal – a lush, green, warm oasis amid Iceland’s rather more hostile environment. 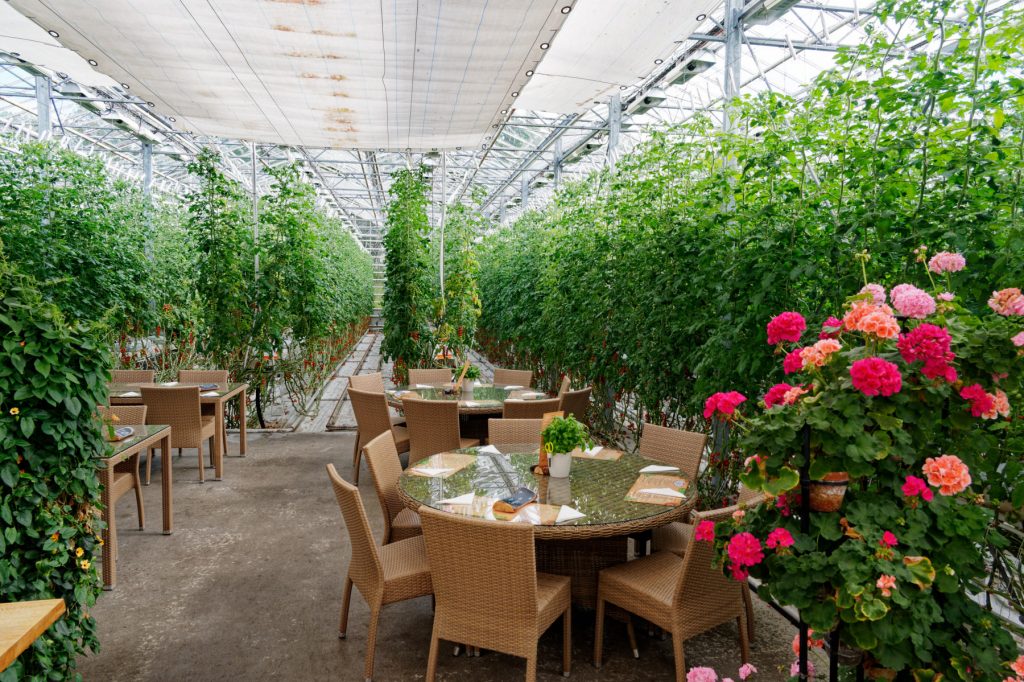 After this – at last! – we got on to the first of the major Golden Circle attractions – Geysir.

Well, actually – not. The original Geysir, whose name is now used worldwide to refer to such phenomena, has not erupted, with maybe a couple of days’ exceptions, for decades.

Here’s a picture of the dormant Geysir, taken by a dozy old geezer. 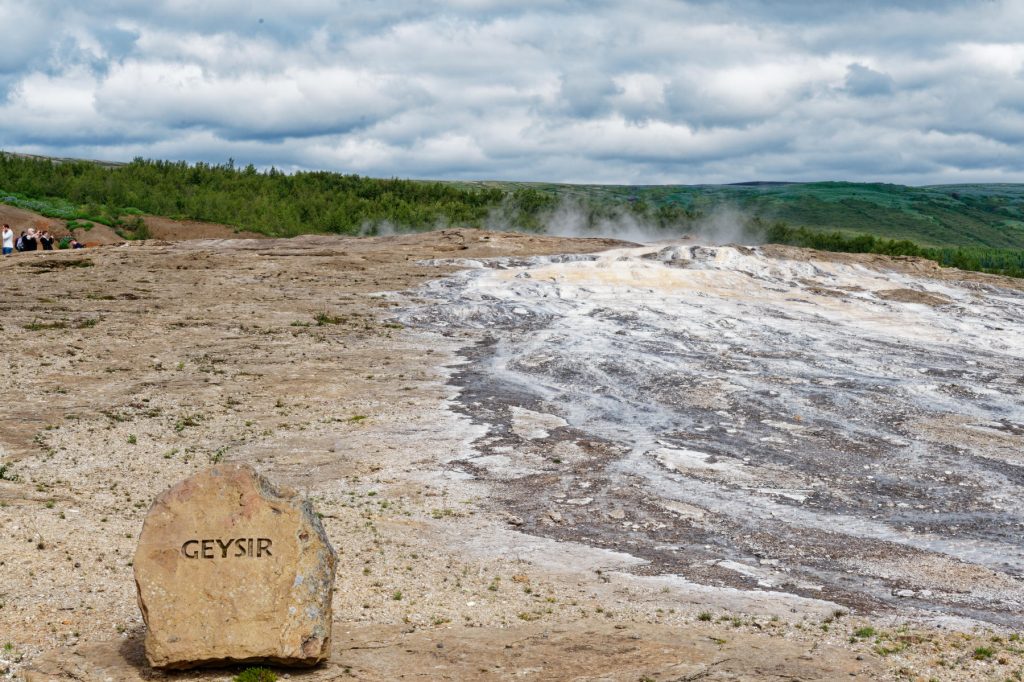 However, on the same site is its little brother, Strokkur, which is active. As might be expected, there’s a crowd of people waiting for the next eruption 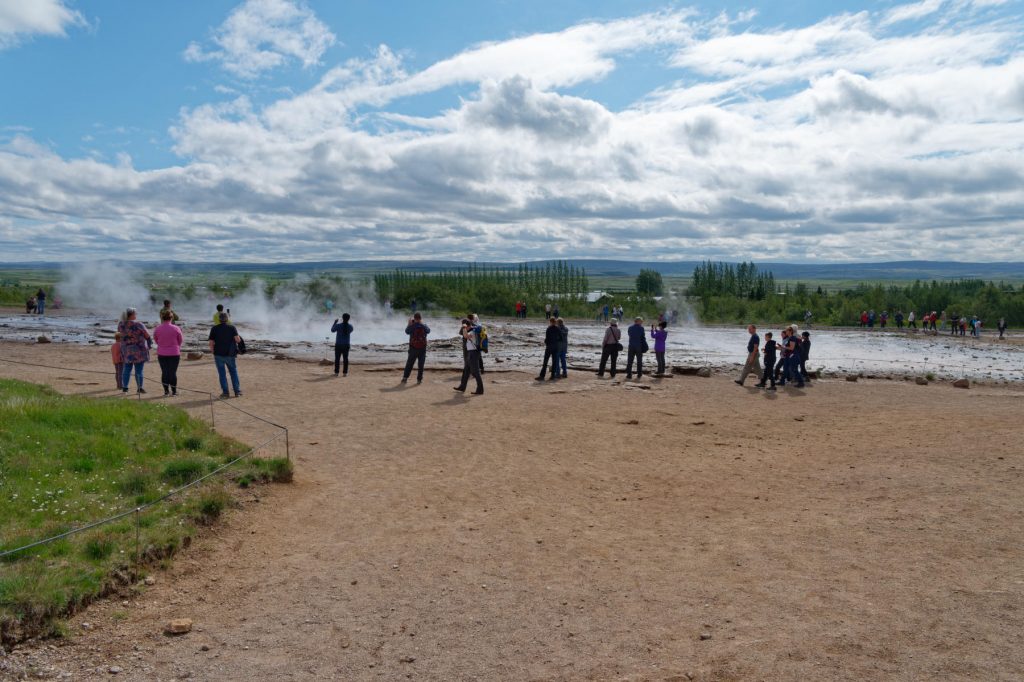 which, although not as high as Geysir was, is quite impressive when it happens.

We then moved smoothly on to the next box to be ticked – Gullfoss, the Golden Waterfall, billed as Iceland’s version of Niagara. I’ve never seen Niagara, so I can’t comment on that (come back to this blog in October next year for my thoughts on it, if plans go according to, erm, plan). It’s pretty substantial. 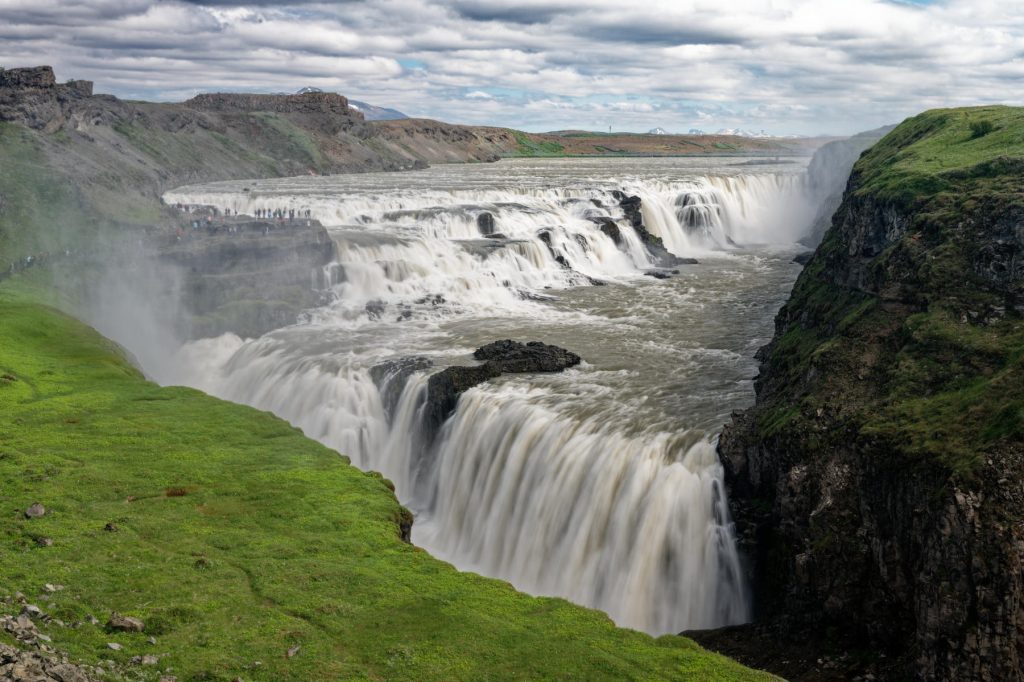 So substantial, in fact, that it’s quite difficult to convey in still photography. There’s a high viewpoint which enables a video panorama, which I hope helps you a bit more with its scale.

Our next stop was at the rather unusual home of “The Cave People“. 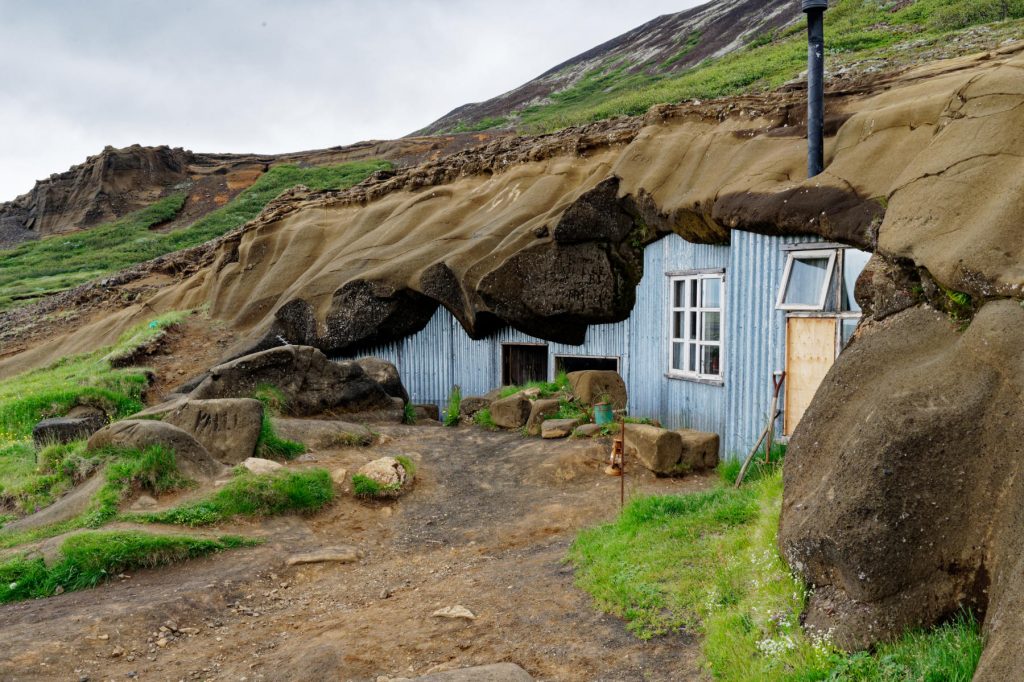 The idea here is to re-create the sort of environment that Icelandic people, typically shepherds, lived in long ago; and about a century ago, this house was used by Icelandic couples. There are a few mod cons visible – solar PV and a small wind turbine – but otherwise the Caves have been rebuilt to look exactly like they did when the last Cave People in Iceland lived there only a century ago. You can take a tour if you like, but we didn’t because the next box to be ticked was calling – Þingvellir National Park (pronounced “Thingvellir” by the way).

Þingvellir is the National Park where the Althing, an open-air assembly representing the whole of Iceland, was established, way back in the year 930 and continued to meet until 1798. Over two weeks a year, the assembly set laws – seen as a covenant between free men – and settled disputes. It’s held to be the world’s first Parliament. There’s a pole erected to mark its place. 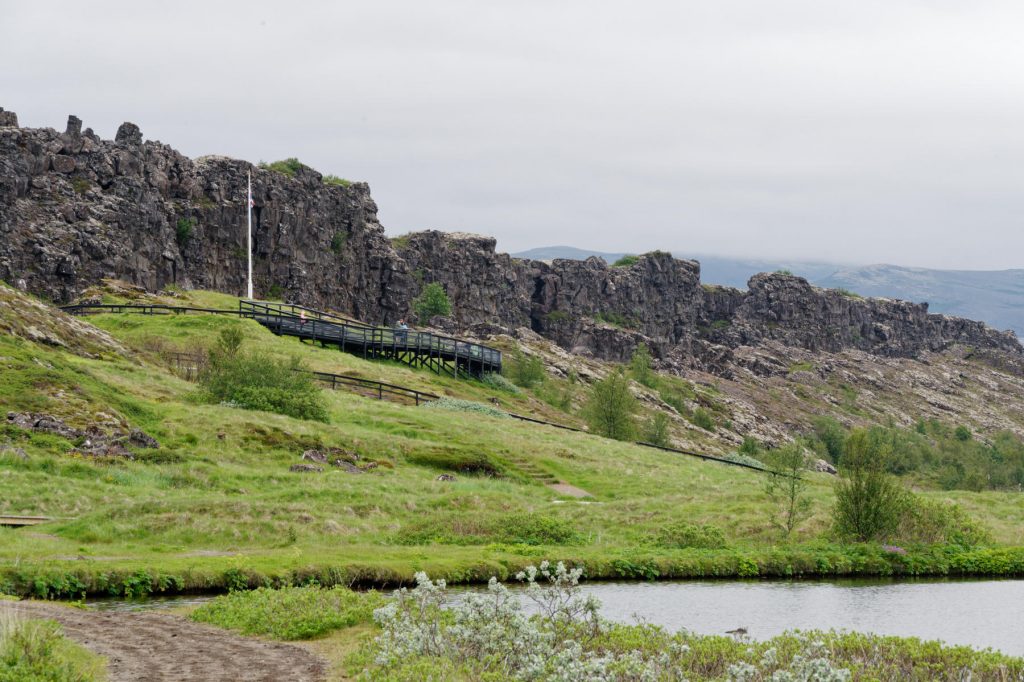 Behind the pole, you can see the wall of rock which marks the start of the American Tectonic Plate.

This “wall” is visible from some distance away as a line across the landscape. Anything this side of it is therefore in Europe. 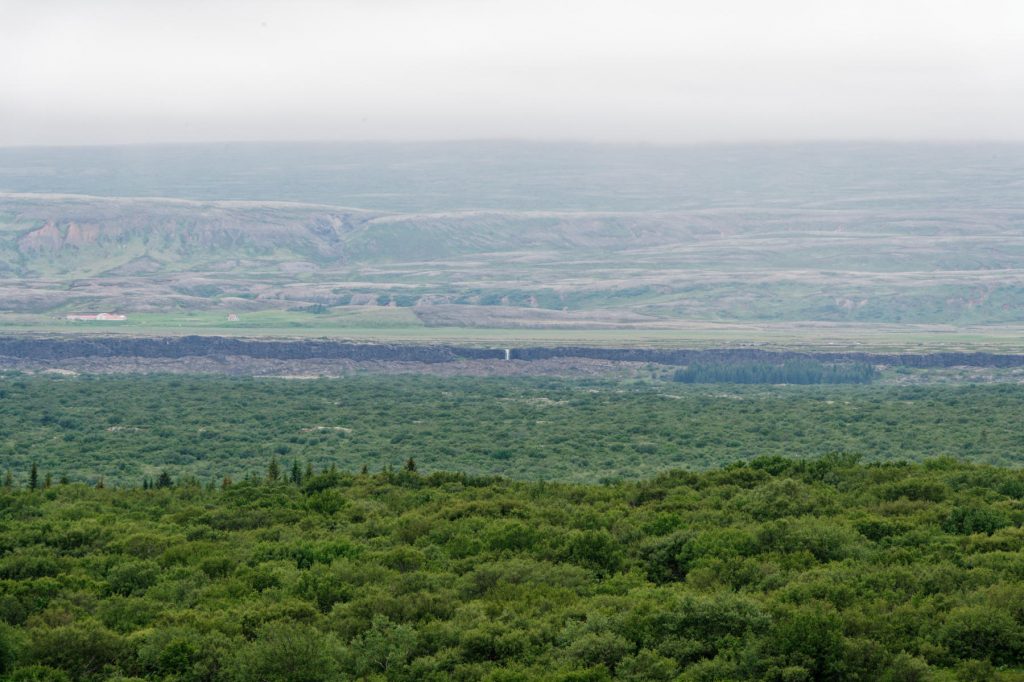 From a viewpoint on top of the wall, you can see people walking between it and the European Tectonic Plate. The two plates are moving apart at some 2cm per year, but I still assert that it takes some courage to walk between them, just in case the middle bit collapses.

There is an Interesting Church across the river 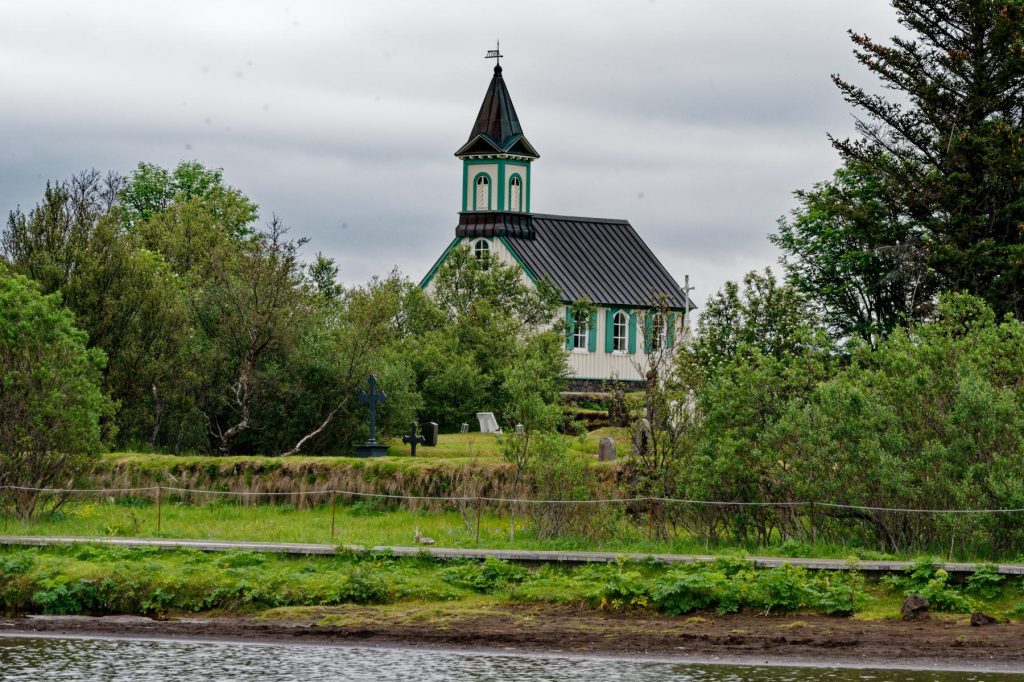 and a very nice, calm lake 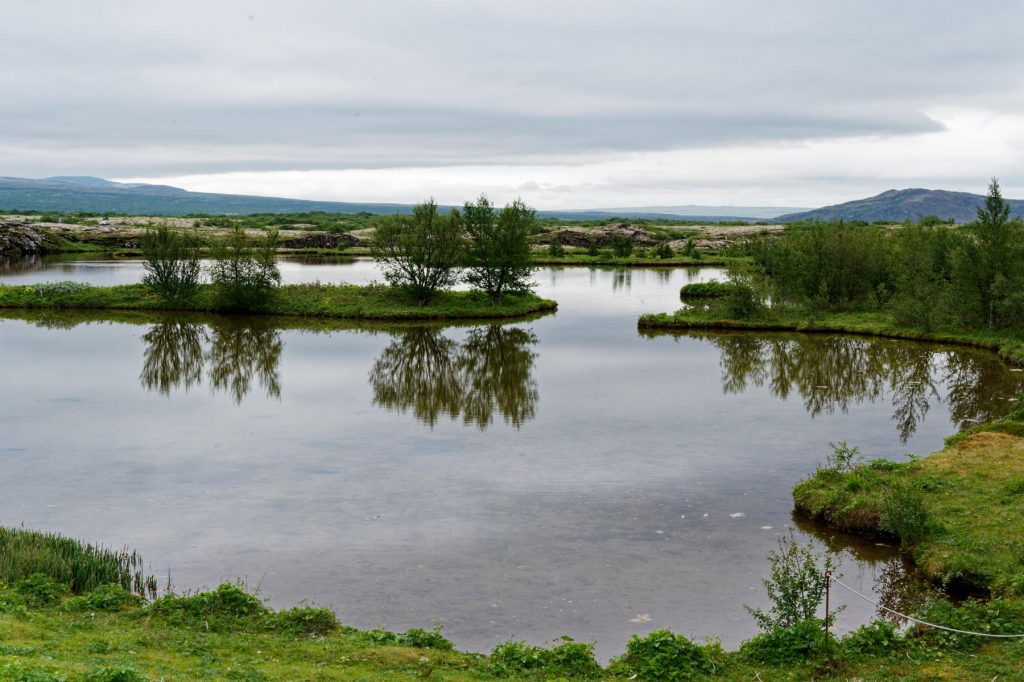 (in this windy country, you rarely get lovely calm reflections like this).

So that was the Golden Circle well and truly ticked off. But Dagur had a couple of “extras” for us, some less expected than others.

The first was a visit to The Volcano – the recent eruption near Fagradalsfjall. Bearing in mind that the actual eruptingness of the volcano was no longer visible to pedestrians (and any available helicopter for miles around was fully booked to fly over the site), and all that could be seen was lava, I frankly had low expectations for something that took us two hours out of the way between me and a refreshing gin and tonic, particularly since the weather was looking rather grim – after all, we’d seen quite a lot of lava over the last couple of weeks.

When we reached the site, it was evident, though, that it was still a popular day out 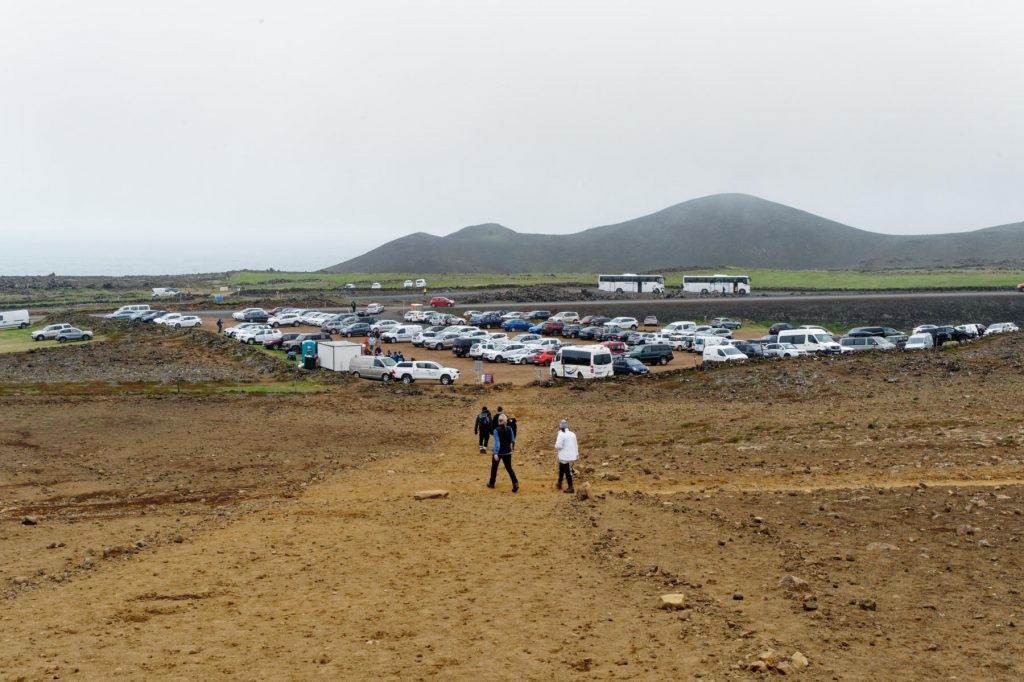 and as we walked towards the lava flow there was a constant flow of people coming back from it, with a huge variety of languages among them, and none of them, even the ones carrying expensive-looking camera equipment, looked dejected. And, in the end, after a 20-minute hike along a defined path but across somewhat broken ground, we reached the start (or, to be more accurate, the end) of the lava flow. 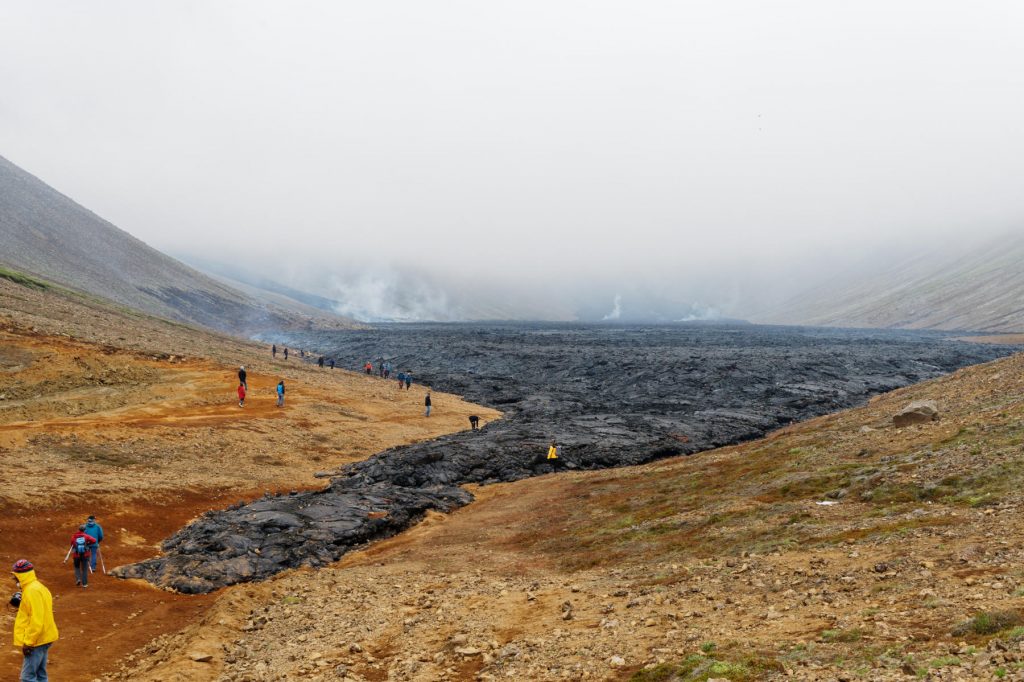 It was actually a very interesting experience, despite poor visibility. You might be able to make out the lava field receding into the distance and splitting round a hill; we walked about half a mile along the left hand side before it became clear that you could walk for a further hour or two and see still more lava. To give you a better idea, here is a photo that Dagur sent us some days before our trip started. 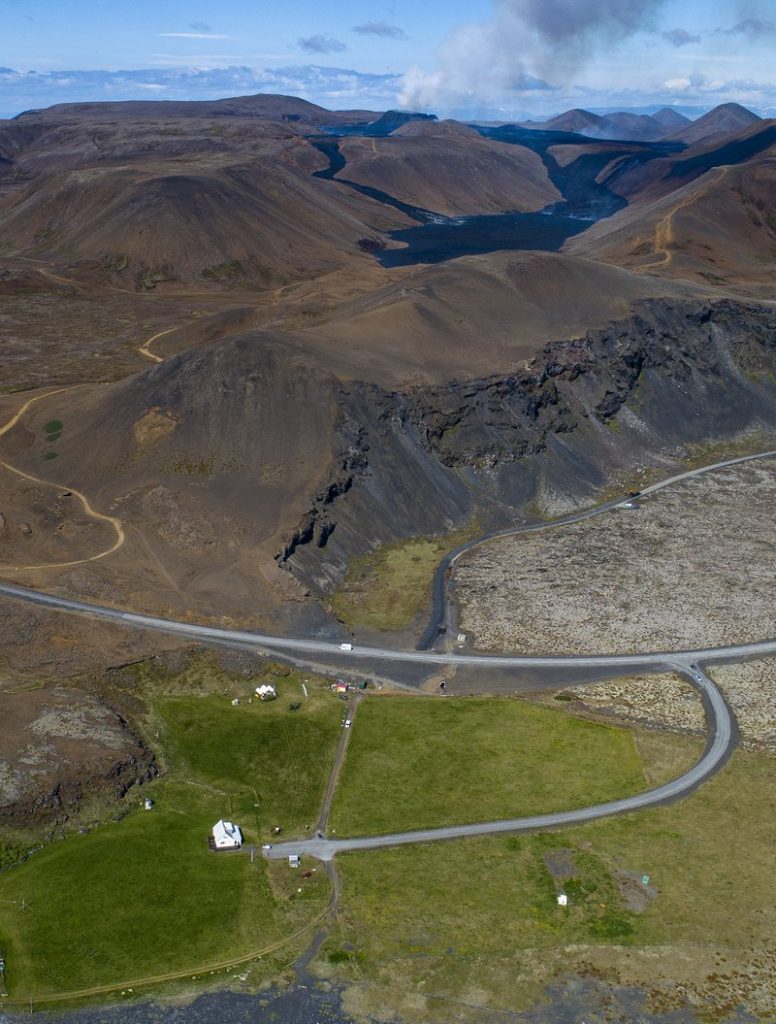 You can see where the lava flow has split around a hill; our half-mile walk took us just short of the “blob” of lava on the left, somewhat before the split – so you can see that it’s a very, very large lava flow.

As we approached the lava flow, the first thing that struck me was the smell. It was a singed kind of smell, but not, as it were, “natural”. As Jane said, it was the sort of burnt plasticky, rubbery smell that a photocopier makes as it goes seriously on the blink.

And the second thing was the heat. It wasn’t very hot, but there was a sense of a vast amount of powerful warmth emanating from the lava – and the very real understanding that setting foot on it would be a foolish thing to do, the sort of total fuckwittery that only Instagram selfie addicts might try and which will hopefully lead to the Darwinian extinction of that vapid species. 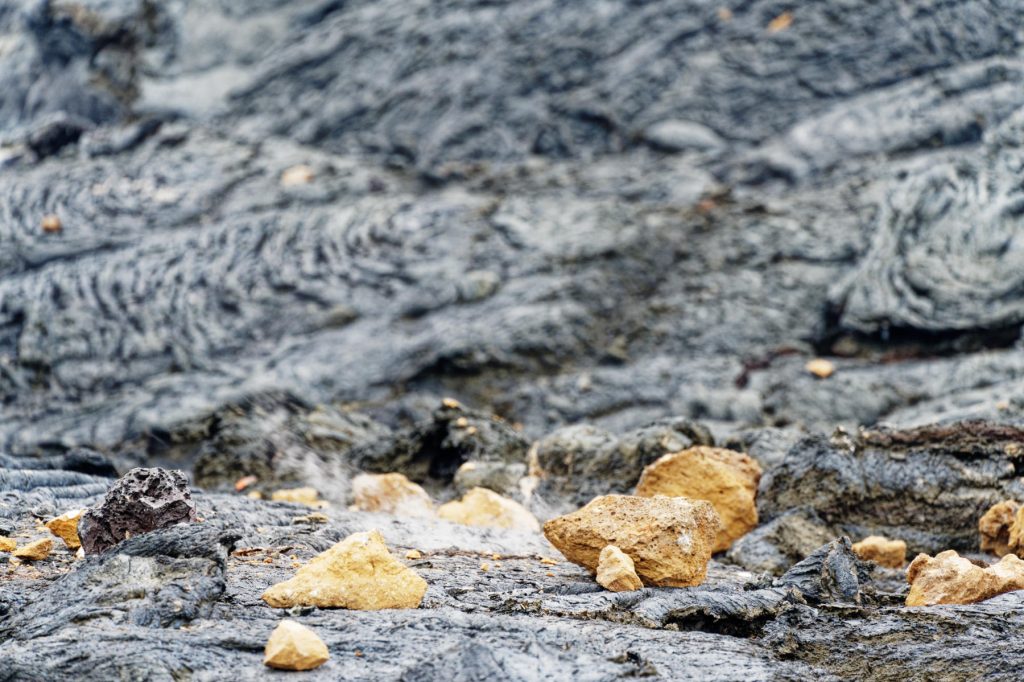 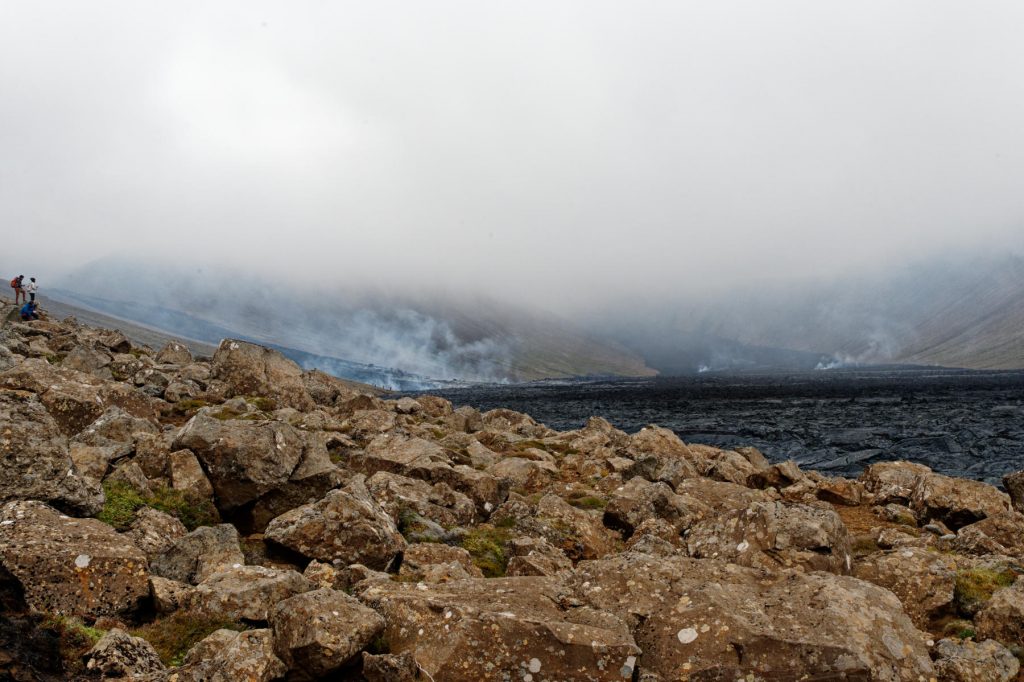 The lava gave rise to some interesting abstract image possibilities. 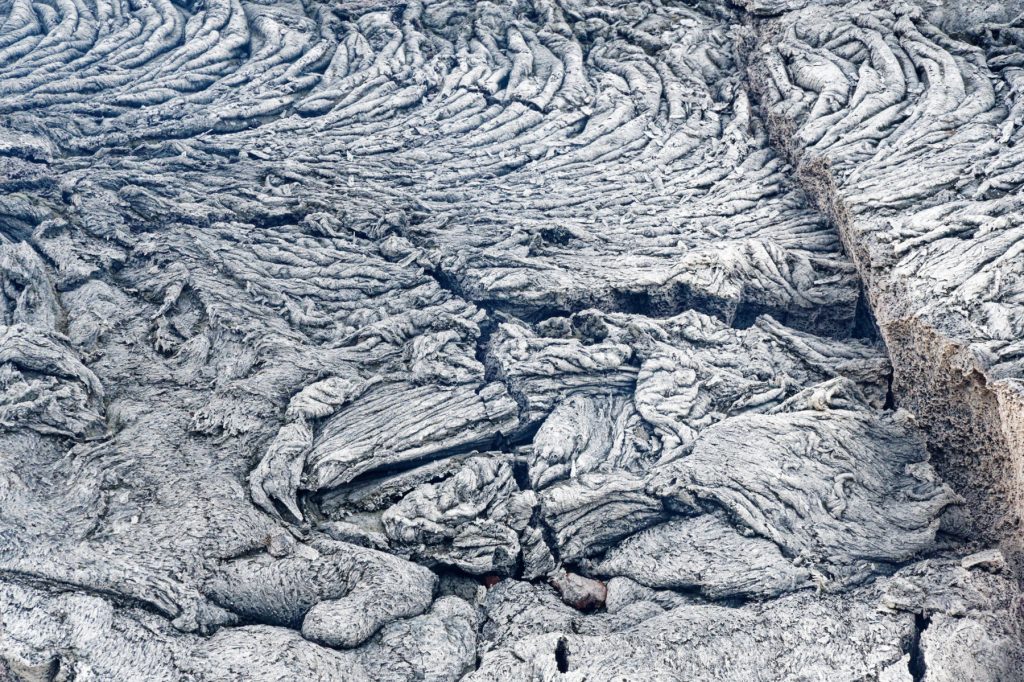 All in all, I’m glad that Jane insisted we do the trip to the site; even though there were no eruptive fireworks to marvel at, we came away with a sense of the enormous power that lay beneath, despite it being (for the moment) quiet.

Then Dagur sprang his last two surprises on us. One was a visit to a major tourist site – the Blue Lagoon. Although it’s quite close to the eruption site, we hadn’t expected to see it, so it was a nice little fillip for the end of the tour. Again, it’s one of those places where the basic description – a lagoon of black rock containing blue water – doesn’t cut it to convey what the place is really like.

There’s a hotel and spa there, where guests can frolic in the water (which frankly looks toxic to me) 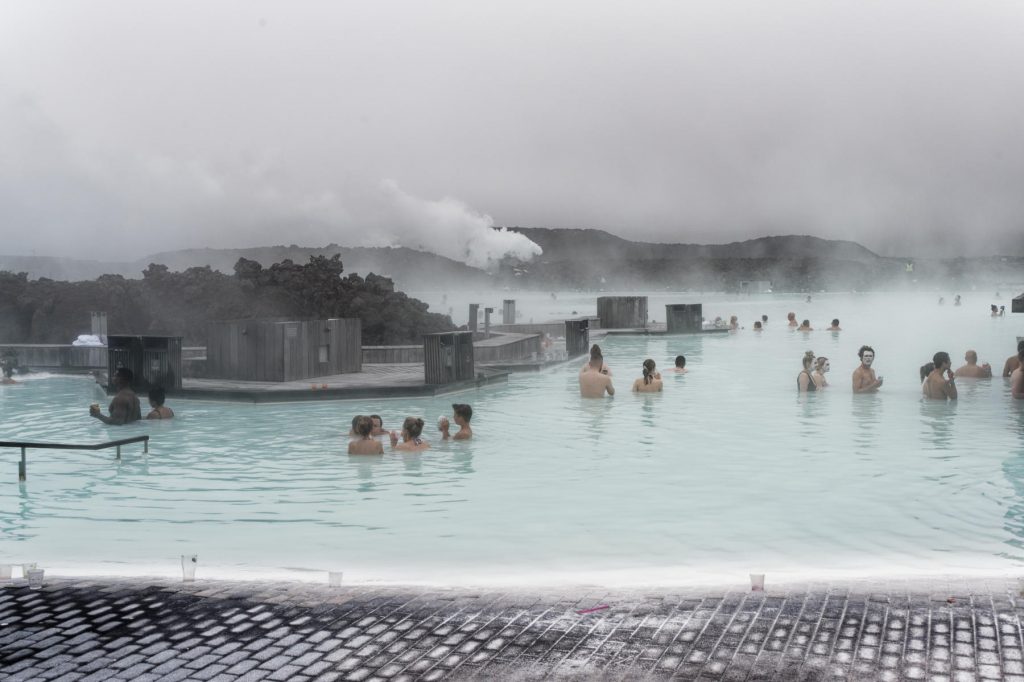 and they can even buy beauty face masks if they’re completely unselfconscious. 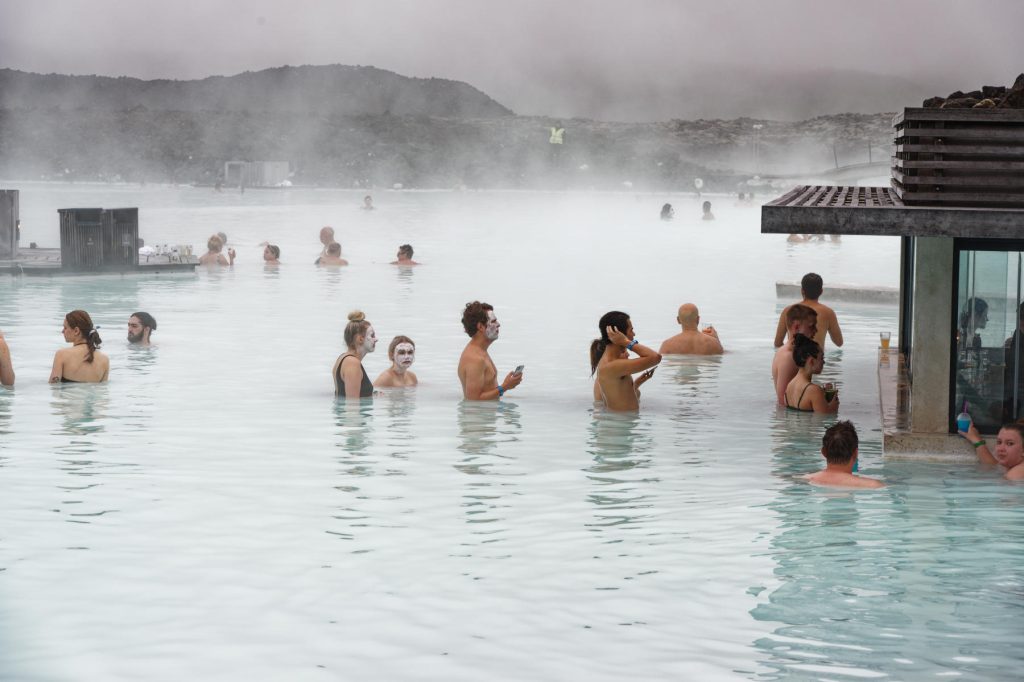 But you can also walk around the lake proper, and it is a weird and wonderful sight. 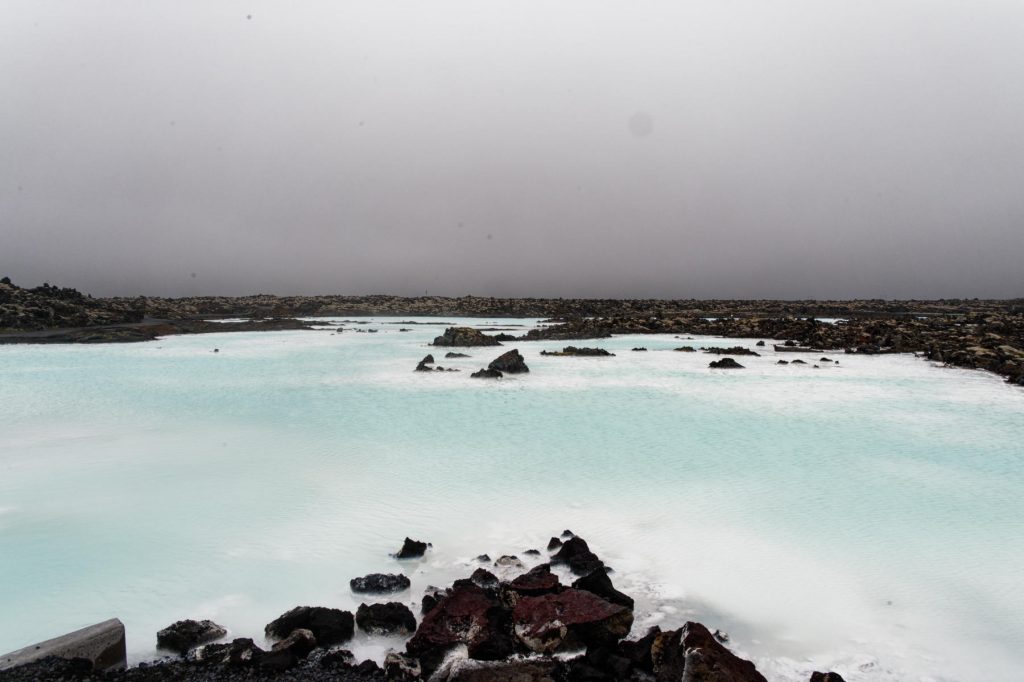 By this stage, it was getting quite late, and we thought that these two diversions had eaten rather heavily into Dagur’s time and goodwill; but he sprang one more surprise on us….. 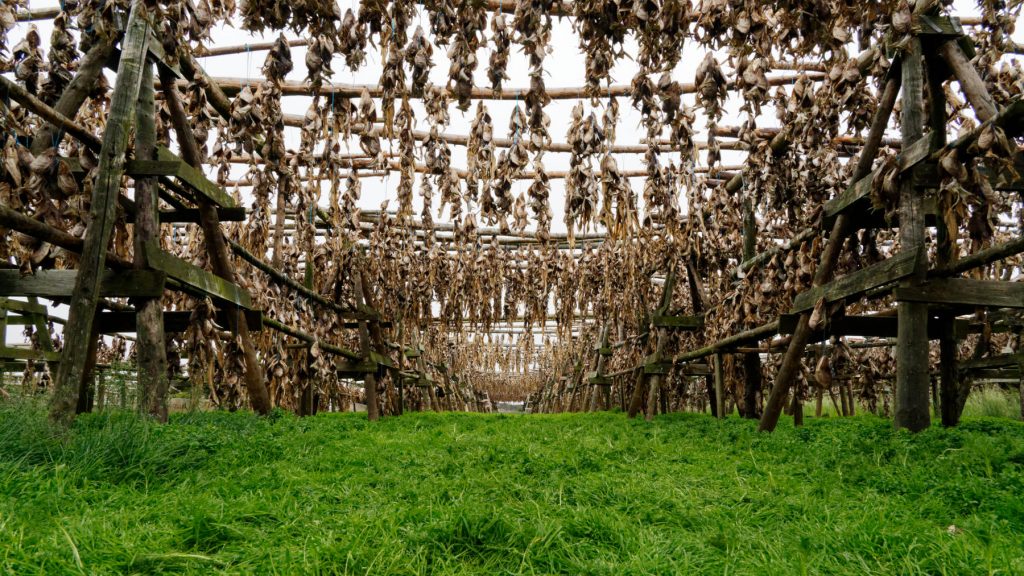 there’s a site outside Reykjavik which is so little talked about that even the locals don’t have a formal name for it. It’s a site where fish are hung for up to three months to dry them before they can be used for some local products (e.g. in cat food) and also for export – apparently the eyes are a delicacy in Nigeria… 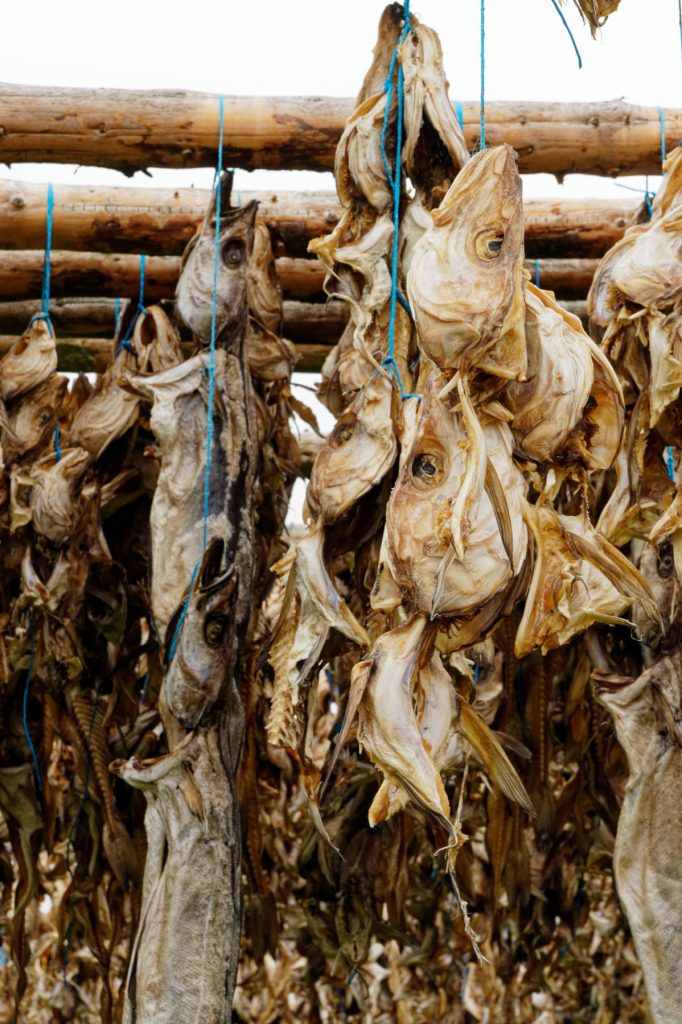 And thus ended our second week in Iceland and the touring aspect of our holiday here. We’d covered 2,000 kilometres, taken 2,000 photographs and presented nearly 400 of them on this blog (oh, I’m not done yet, though!) It has been fascinating, educational and often awe-inspiring. I’m absolutely delighted to have documented it through these pages, because there is no way I could have remembered a tenth of what we’ve been told and what we’ve seen otherwise; and we were both utterly knackered and quite glad to get back to Reykjavik, check in to our final hotel, hotfoot it out for burger and stellar chips once again at Reykjavik Chips (see the “Cry Freedom” blog), and – relax. Our brains are full. Full of the sights, sounds and smells of an extraordinary country which it has been our pleasure to travel round and our privilege to see in largely beautiful weather. As a way of breaking out of UK’s Lockdown it simply couldn’t have been bettered.

As I say, I’m not done with you yet; we have a day at leisure in Reykjavik (and the rain, if the forecast is anything to go by), and we have to do some Covid-type admin before we leave. I’ll report how the day went in the next post, and hope you come and join me there.