Monday 5th July 2021. We had the luxury of a slightly late start in that we were leaving the hotel as late as 10.30. This gave us the opportunity to have a wander around Akureyri.  We’d been past the botanical garden en route to the hotel yesterday, and thought this might be a decent starting point. And There Was A Church….

Akureyri is the capital town for the region and, like the UK’s capital, has charm in sporadic doses among other, less appealing, aspects.  But there is quirkiness, such as the pavement outside the art museum 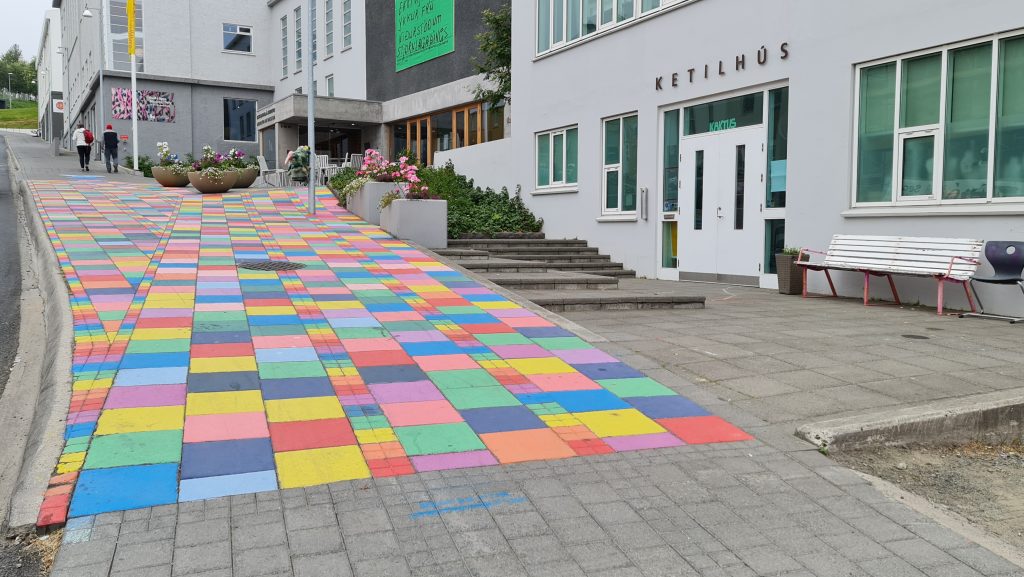 and the steps that lead to the college. 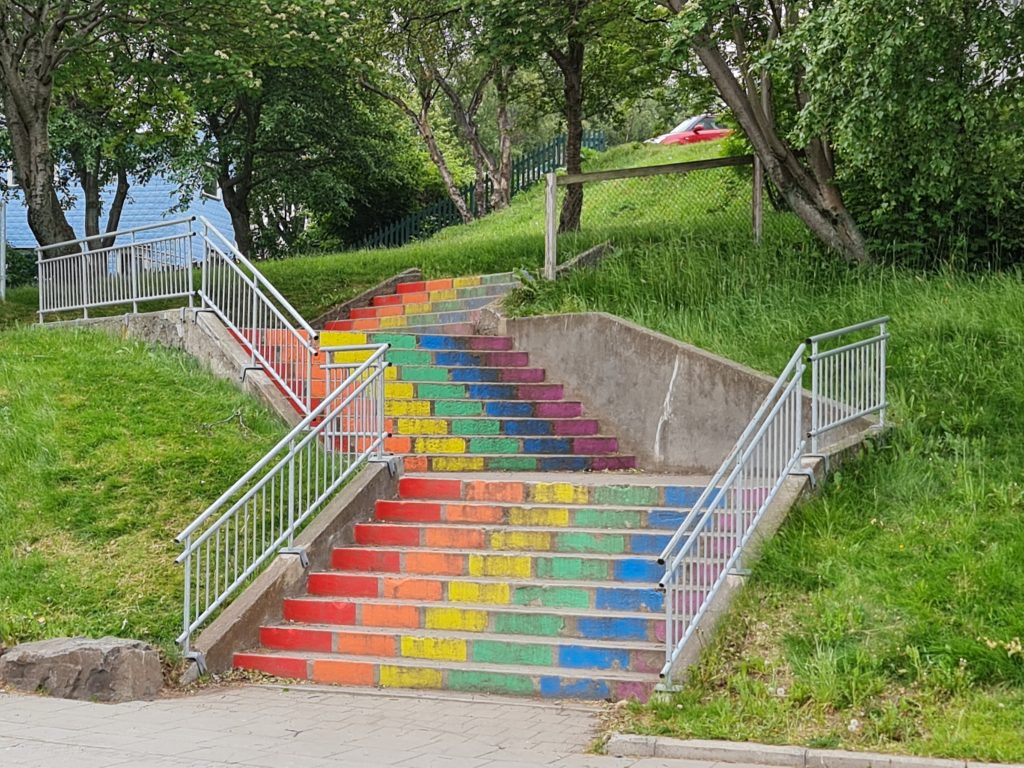 There are also fine edifices, such as the college’s main building 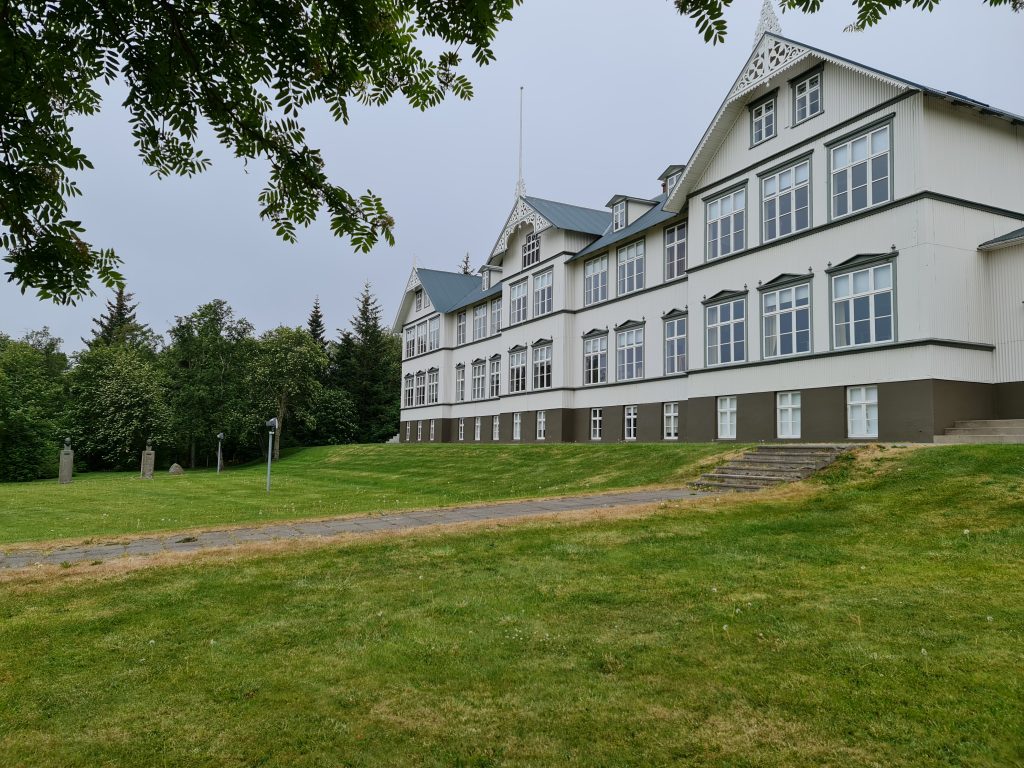 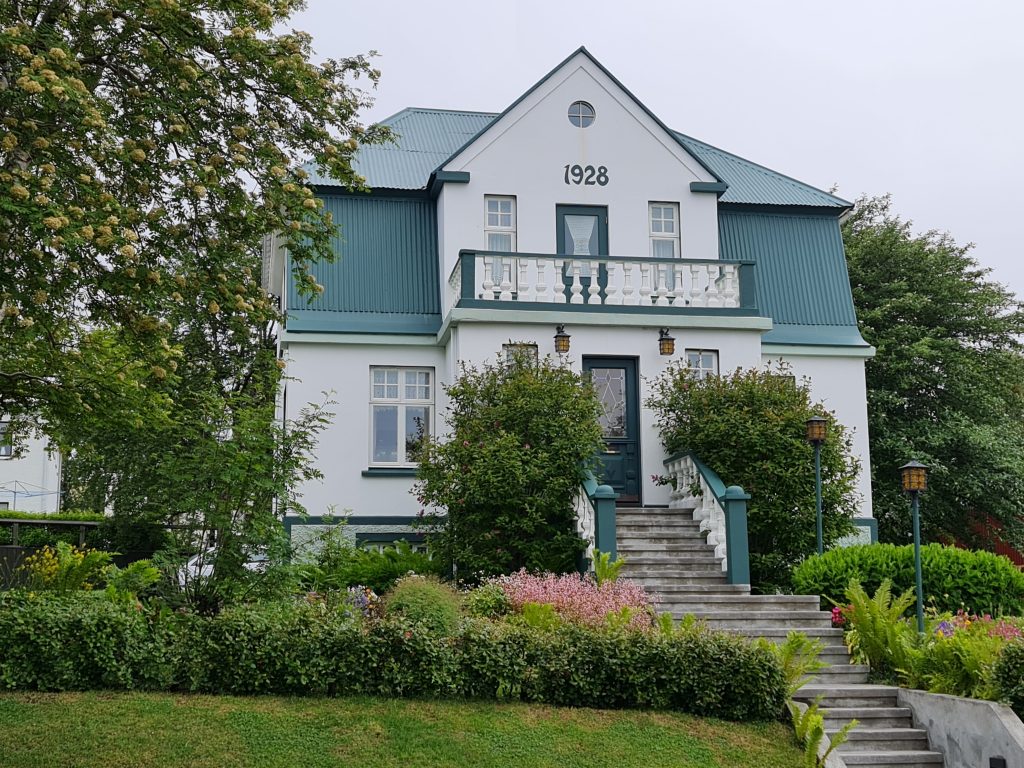 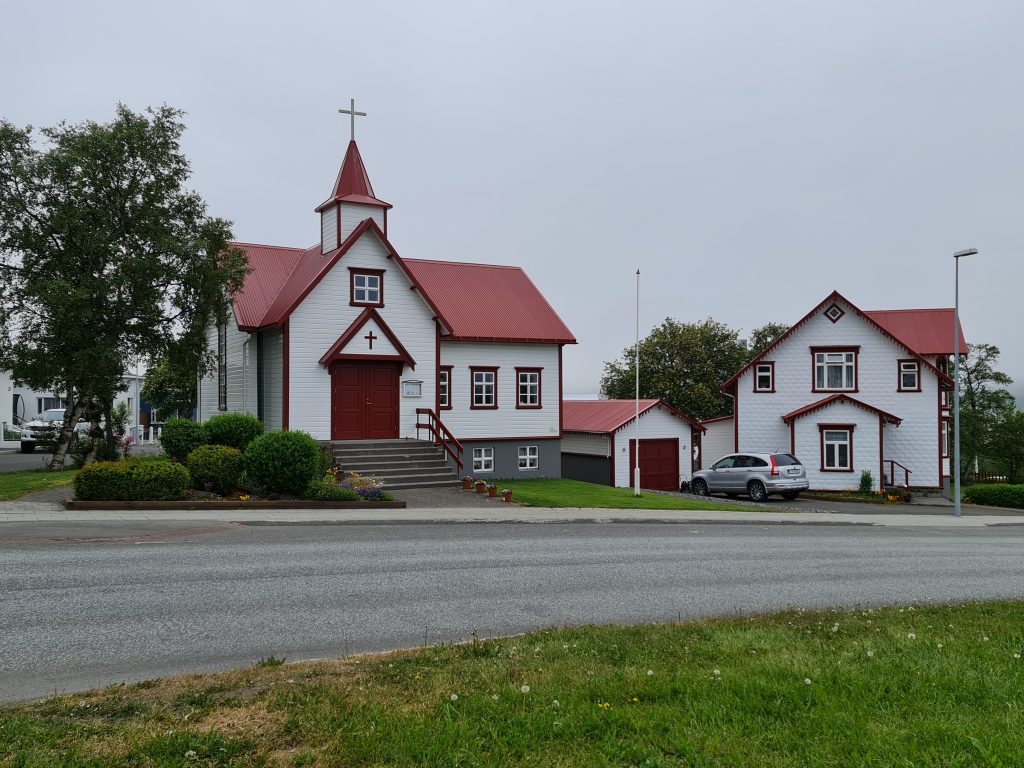 The botanical garden, one of the most northerly in the world at only 50km south of the Arctic Circle, was created in 1912 and has extended over the years to form a pleasant oasis, free to enter and walk around. 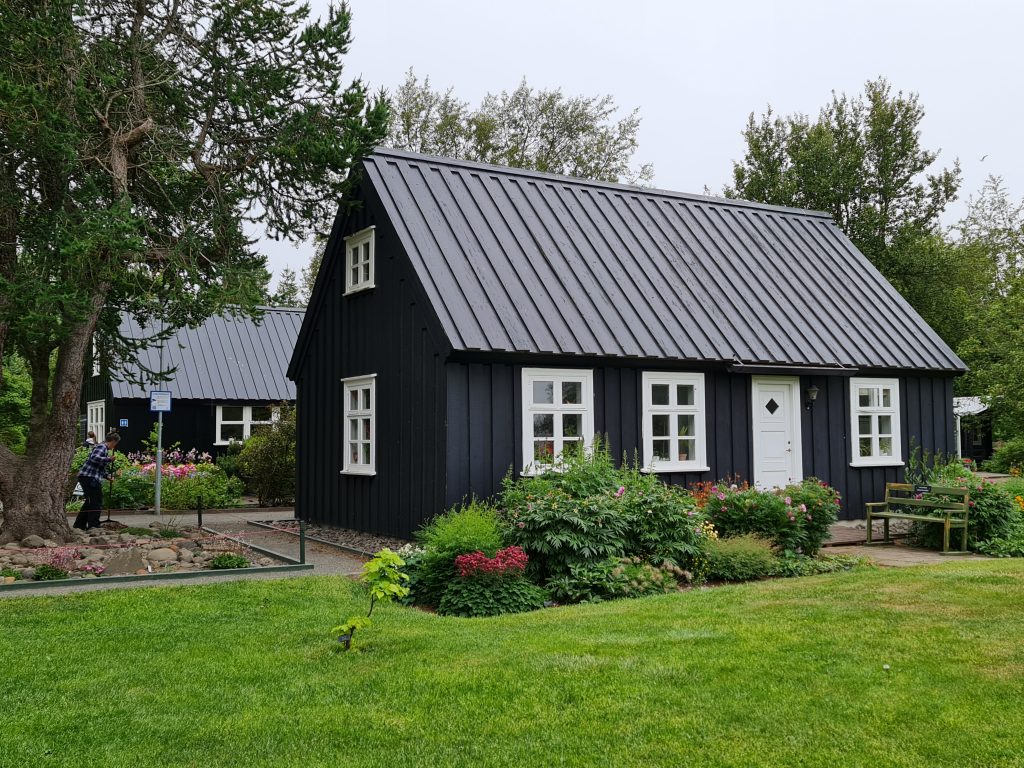 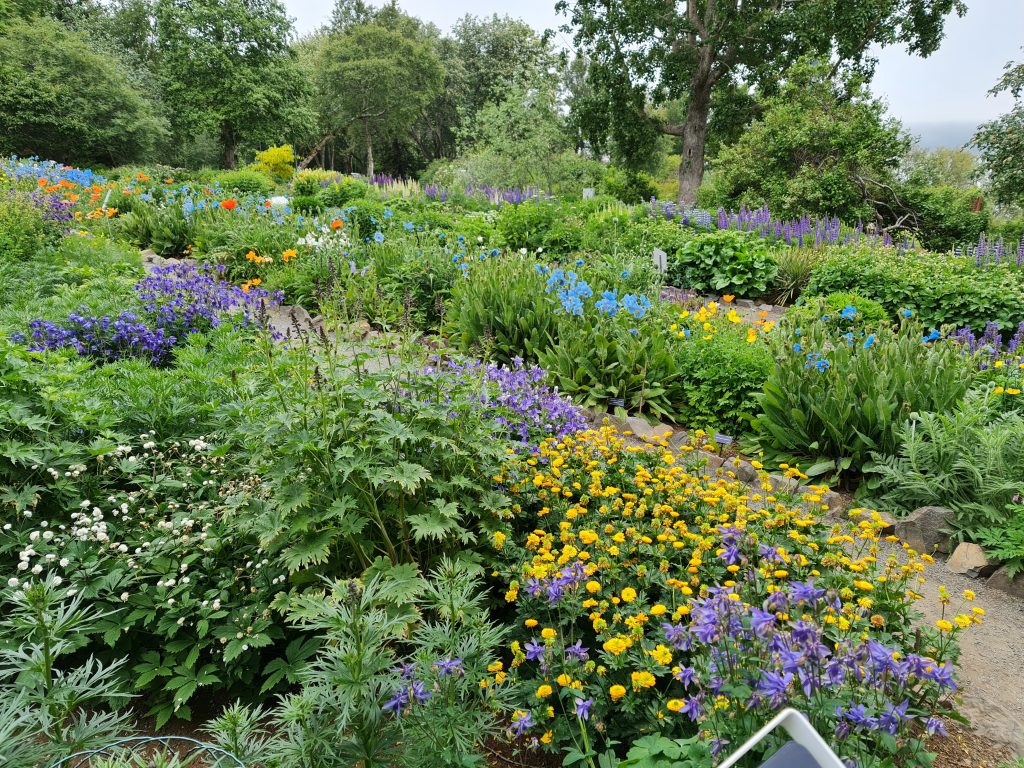 Worth a visit for all floraphiles, but I won’t bore you with too many photos.  It’s only flowers, after all…

On the way down, we passed the church, which shows some art deco influences 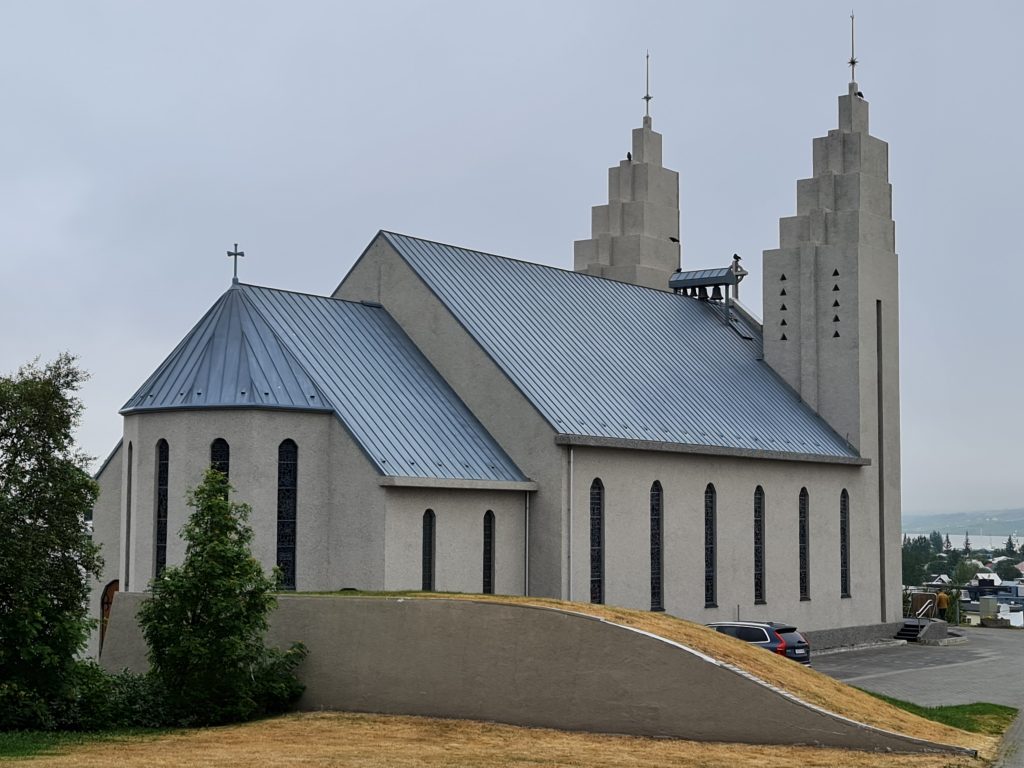 and featured ravens on its spires. 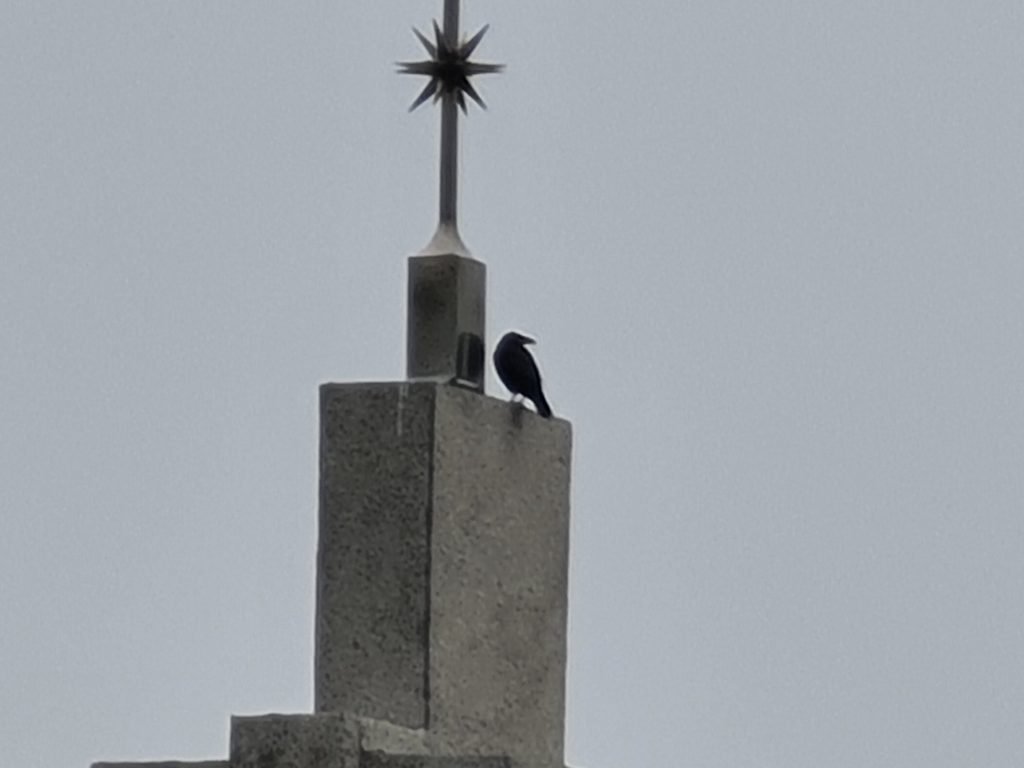 The town has some pleasing buildings among the workmanlike ones. 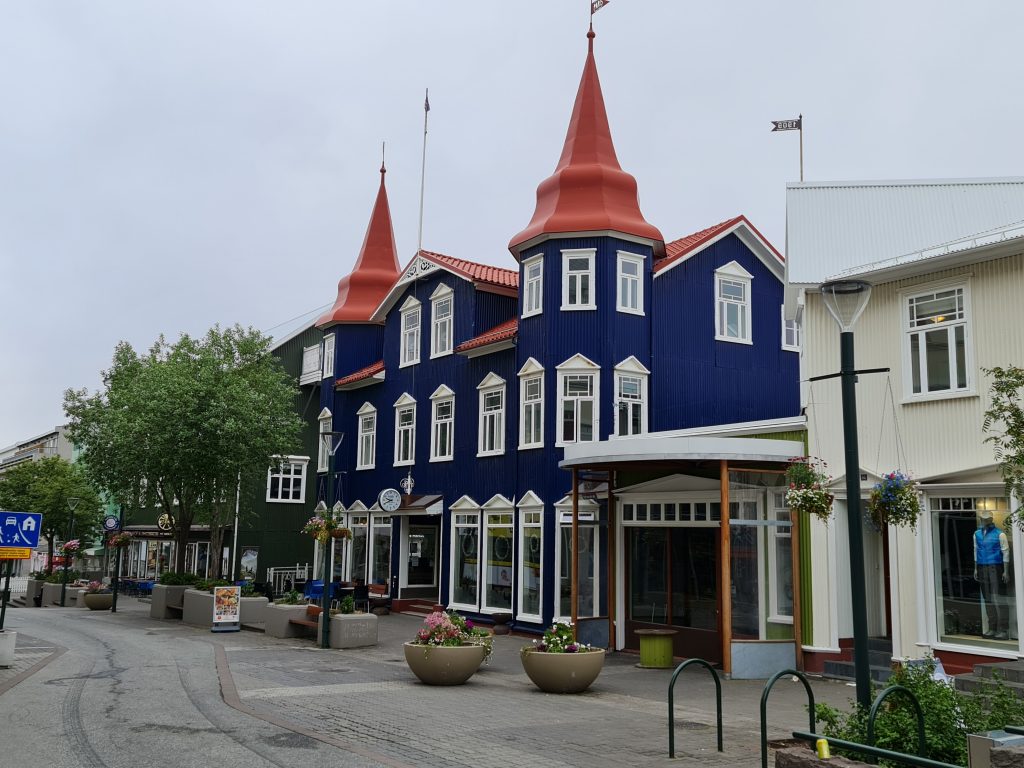 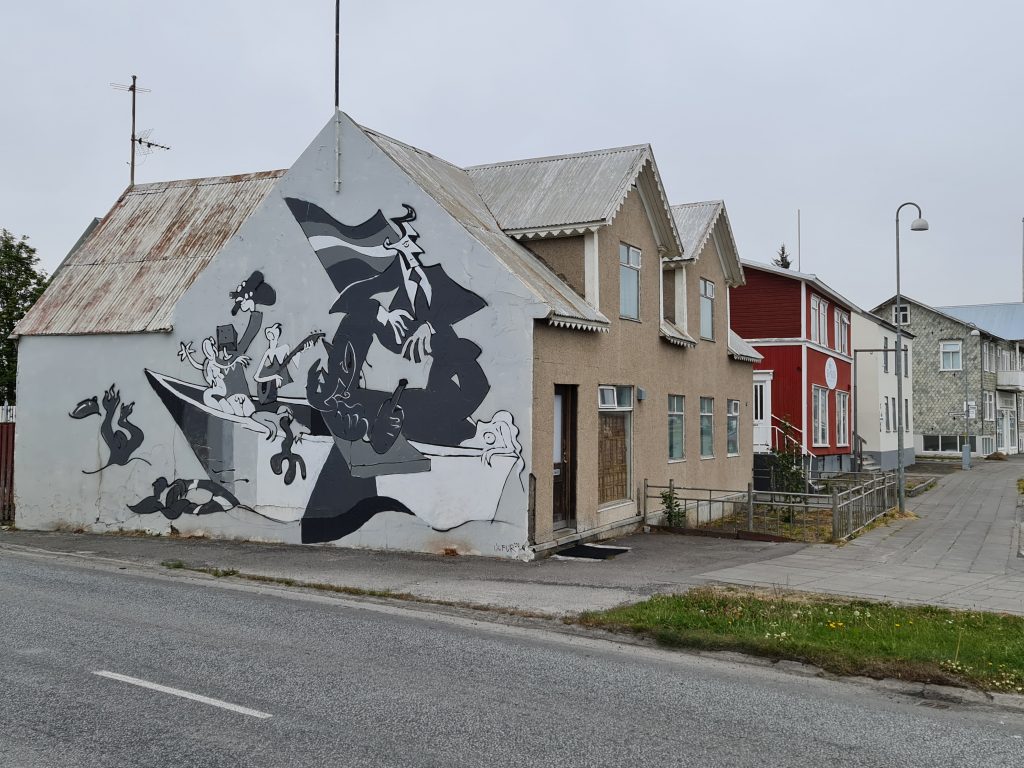 As we left, Dagur was upbeat about the weather prospects for the day.  Akureyri, however, was pretty much blanketed by fog. 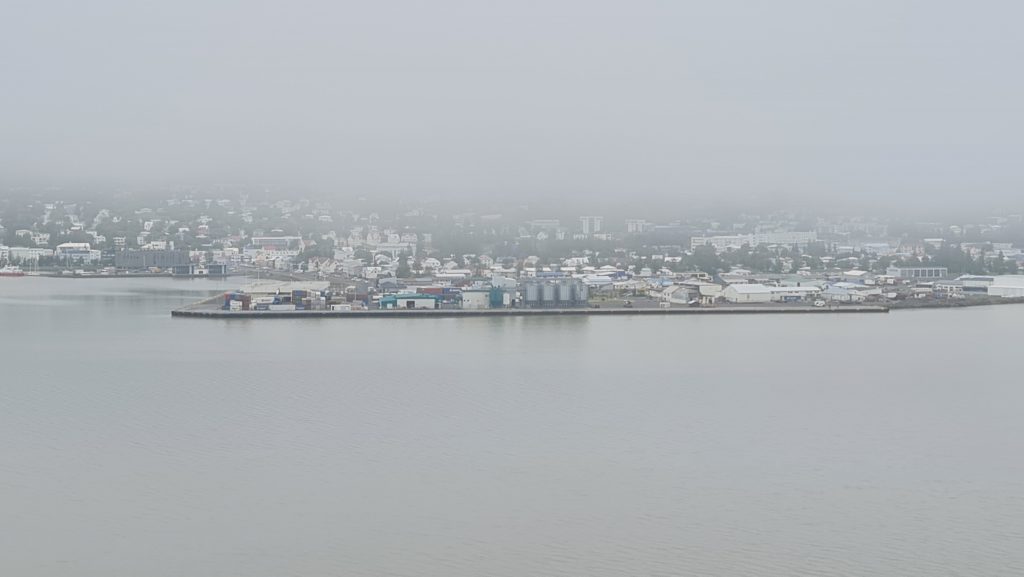 But, as we emerged, blinking, from a tunnel shortly after we hit the road, the weather on the exit side of the hill was completely different 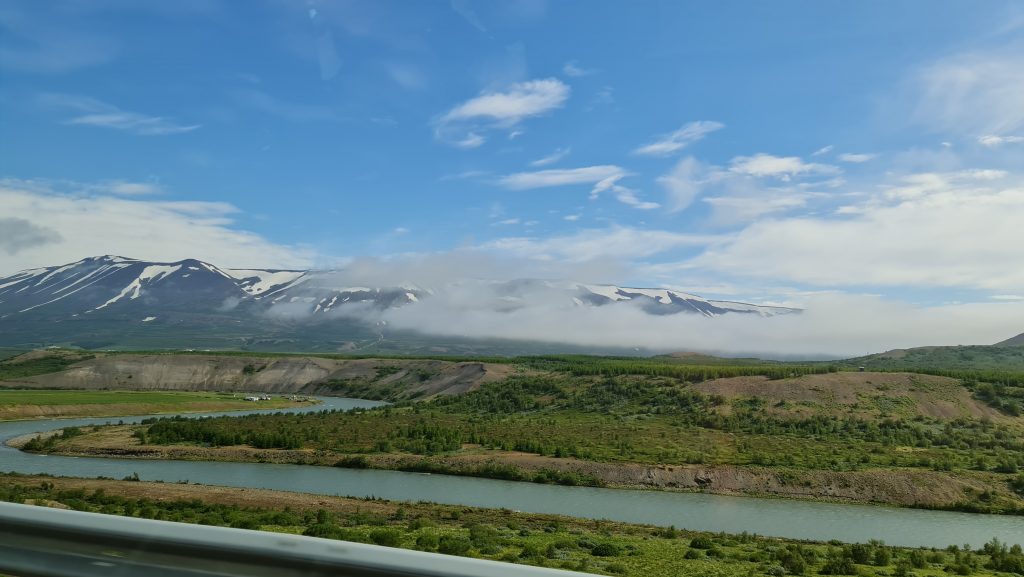 and stayed pretty good for most of the day.

The first two ports of call were waterfalls. (The Icelandic for waterfall, by the way, is “foss”, just in case you were wondering about the title of this post.)

Dagur decided on the hoof to visit the first one, which is called Aldeyjarfoss.  There’s a slightly precarious walk down to it, but it was definitely worth the diversion.

The second styles itself, rather immodestly, as “The Waterfall of the Gods” or Goðafoss. It is an impressive sight, one has to admit.

Since the sun was out, rainbows were on offer in the spray. 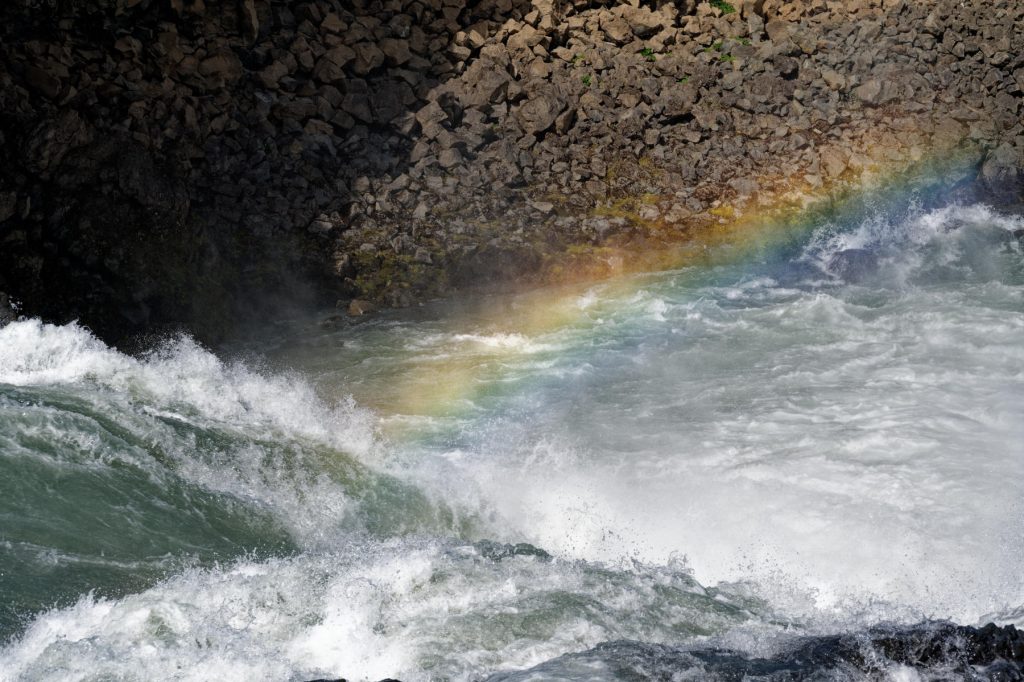 There was a restaurant by these falls, at which we bought some (sadly not particularly appetising) lunch. But at least they also had beer and Earl Grey tea, so all was not lost.

After lunch we headed for our overnight destination, beside Lake Myvatn. The landscape changed as we approached, from the rolling, farmy sort of countryside to a more austere, rocky appearance, which signified that we were in an area of geothermal activity – hot springs, in other words.  The water can come out of the ground at 100°C (as they discovered the hard way when excavating the tunnel that led us through from Akureyri), and so has obvious uses for heating, such as the Myvatn Nature Baths nearby. 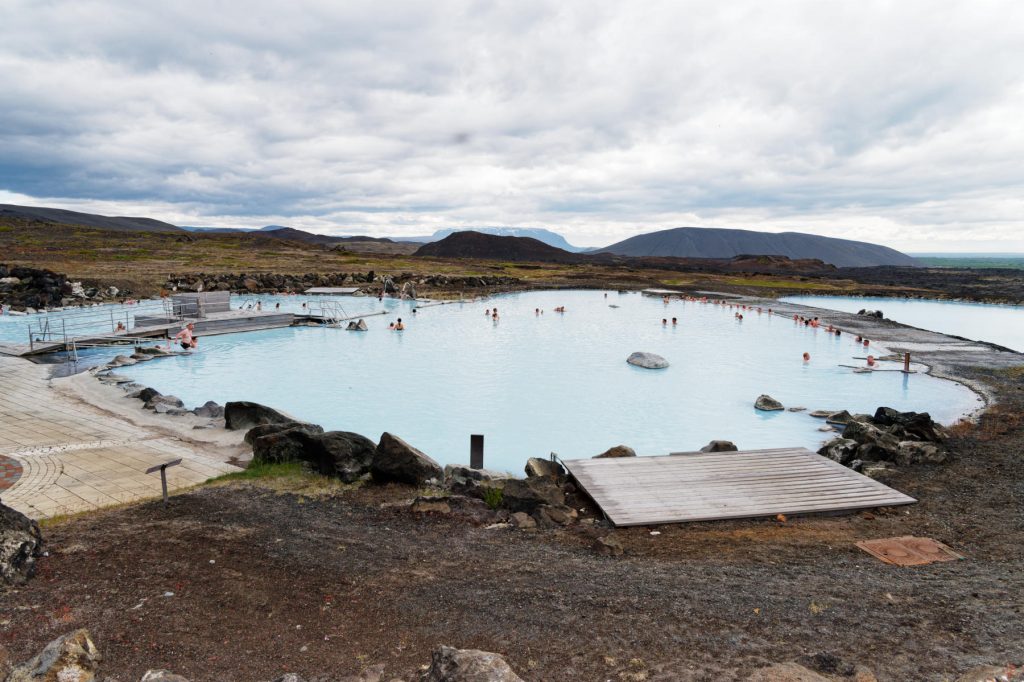 What I couldn’t show in photos was the seething, steaming cauldron nearby with “Danger – 100°C” warning signs on it.

The rest of the day was spent exploring this new, extraordinary – and active – landscape. We stopped first at the Námafjall Geothermal Area. which features smoking fumaroles and boiling mud pots, surrounded by sulphur crystals of many different colours. This sulphur gives the area an overwhelming smell of eggs, and ones that have not been treated well, at that.

It really is an extraordinary landscape 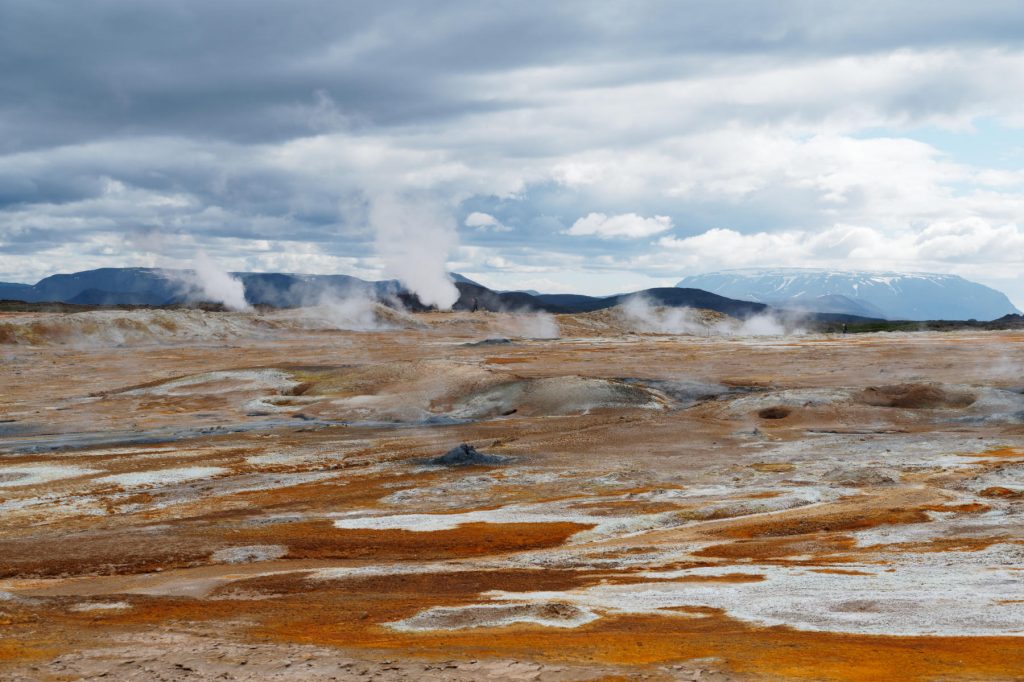 but then almost everything in this area is.  There’s a geothermal energy plant 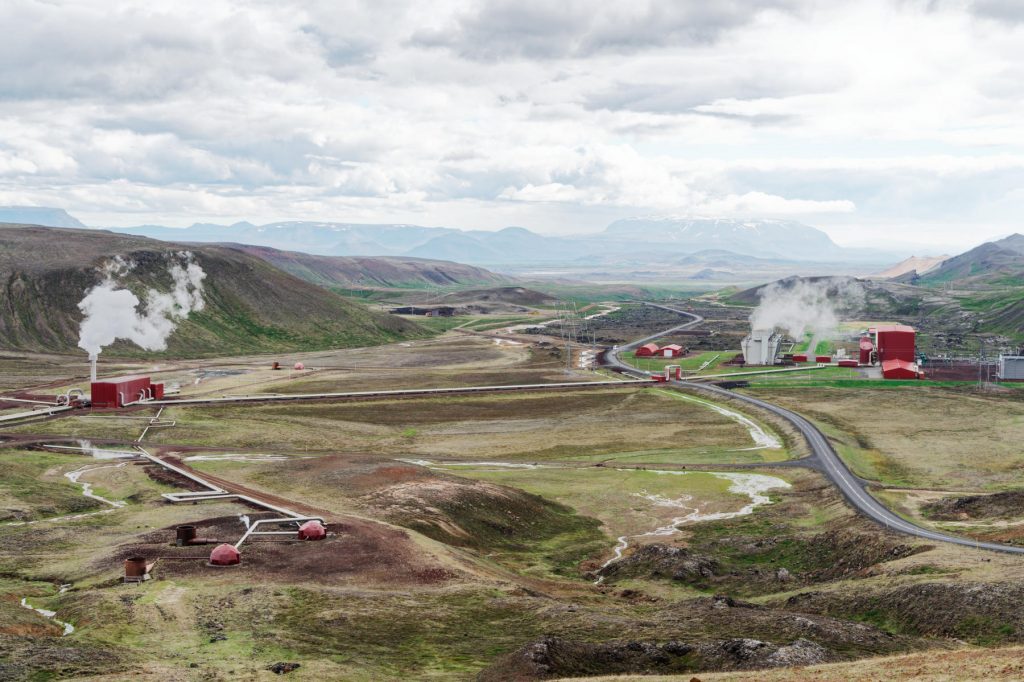 a volcanic mountain, Kafla, with its very own crater lake 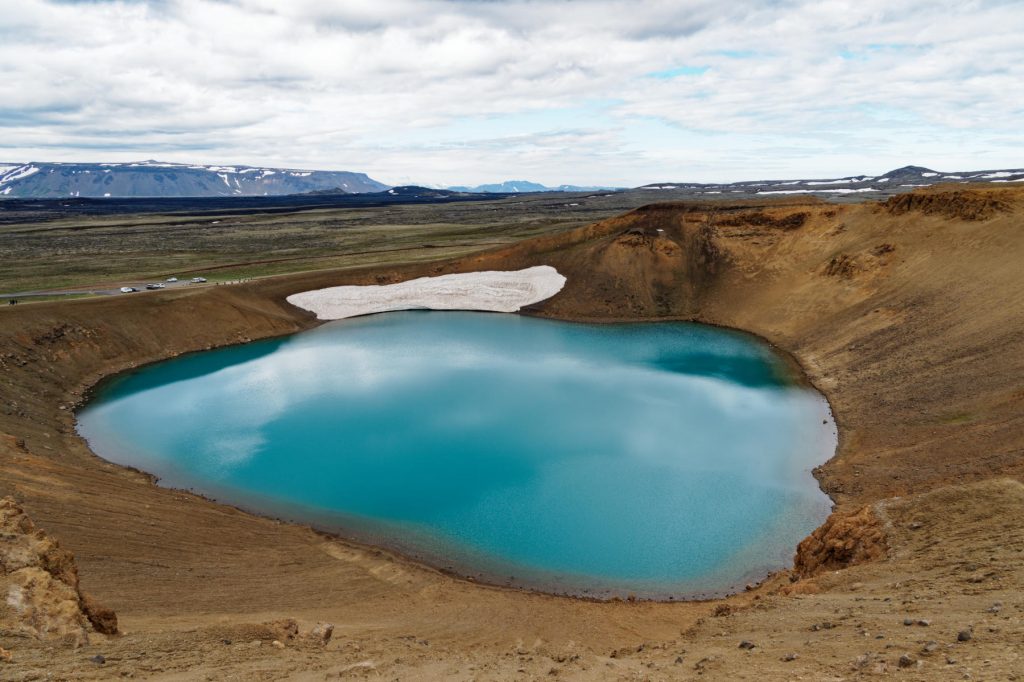 and a huge area called Leirhnjúkur, which is basically a field of lava from eruptions over a period during the 1970s and 1980s.  A walking trail leads across it to the crater of Hófur, and the entire landscape is utterly extraordinary.  I took loads of pics, obvs, and here are some of them. 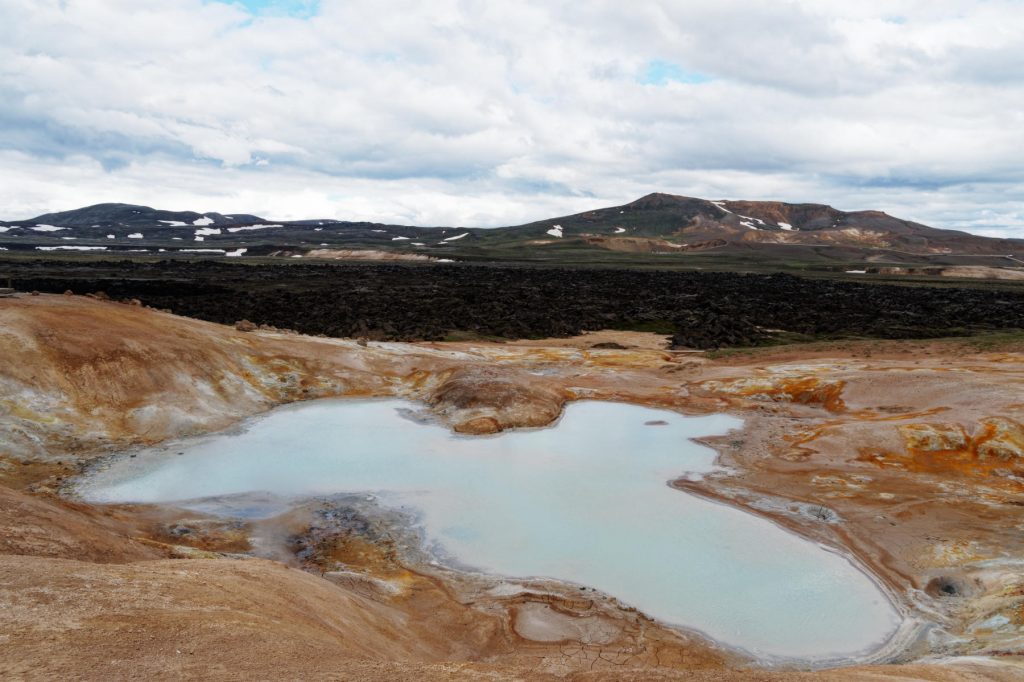 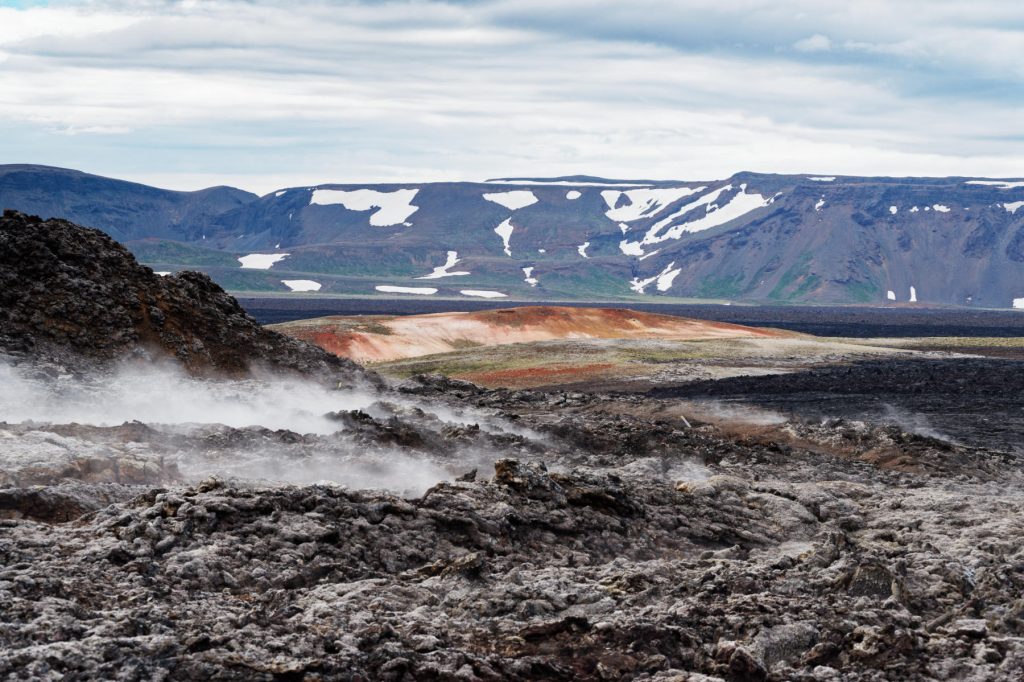 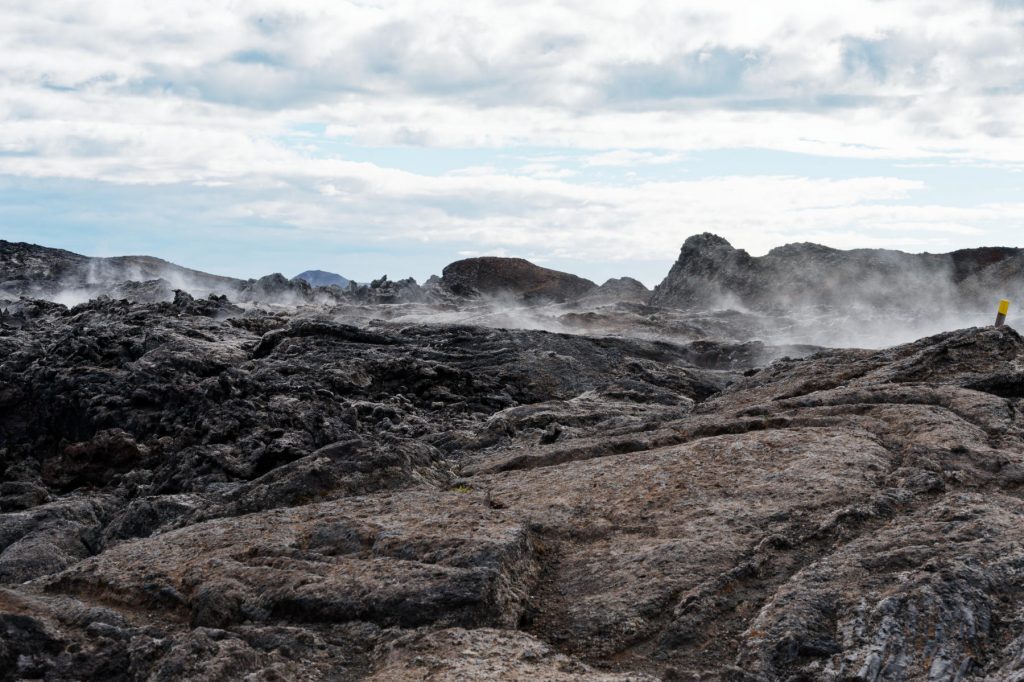 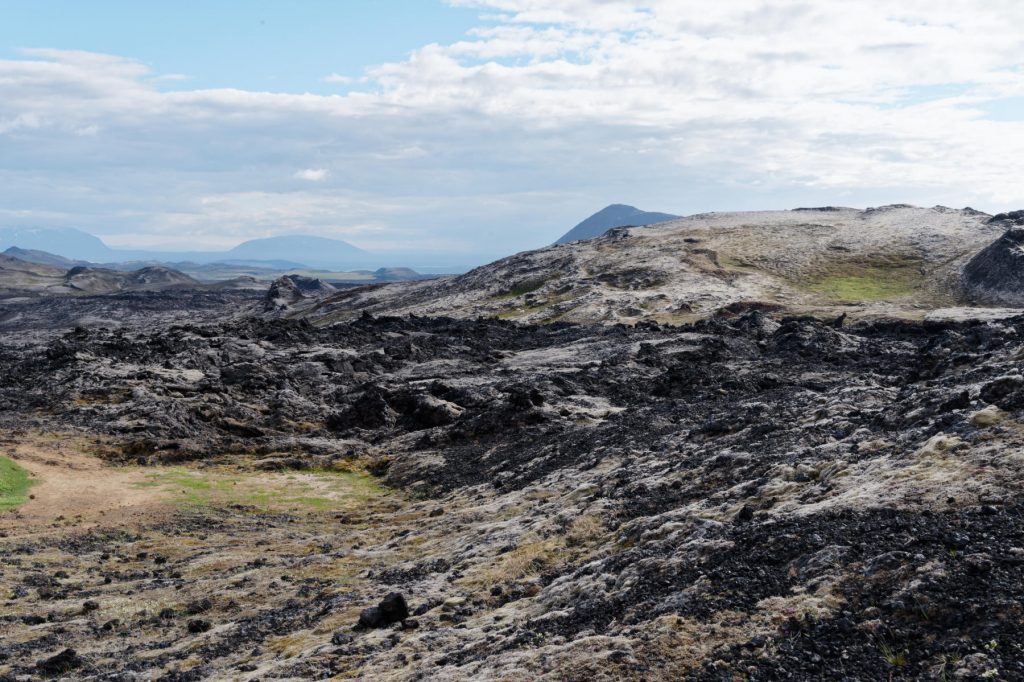 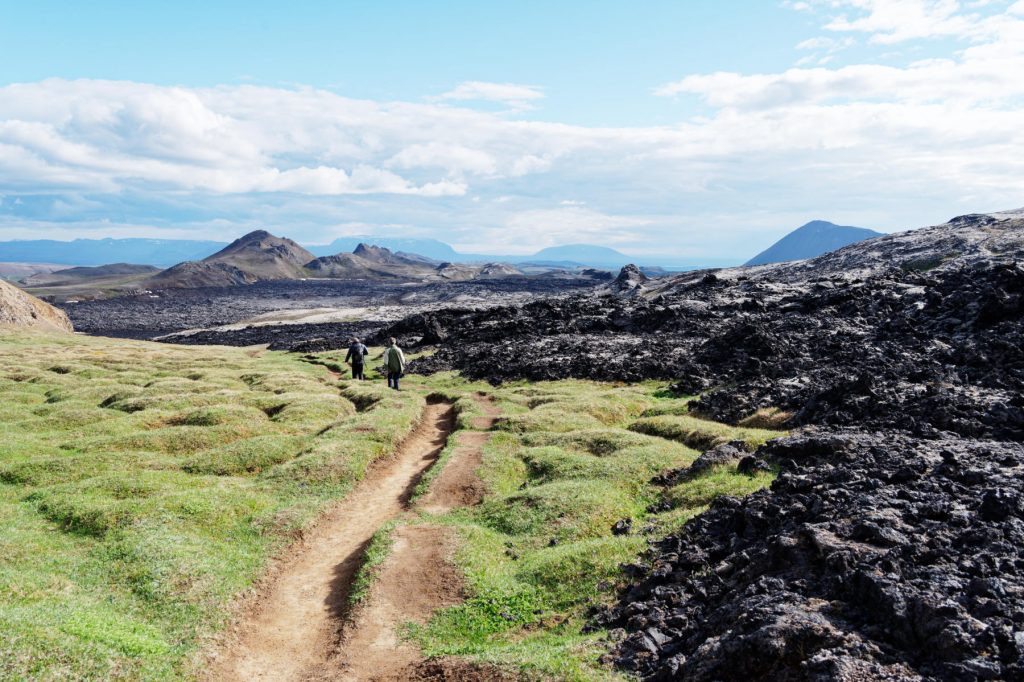 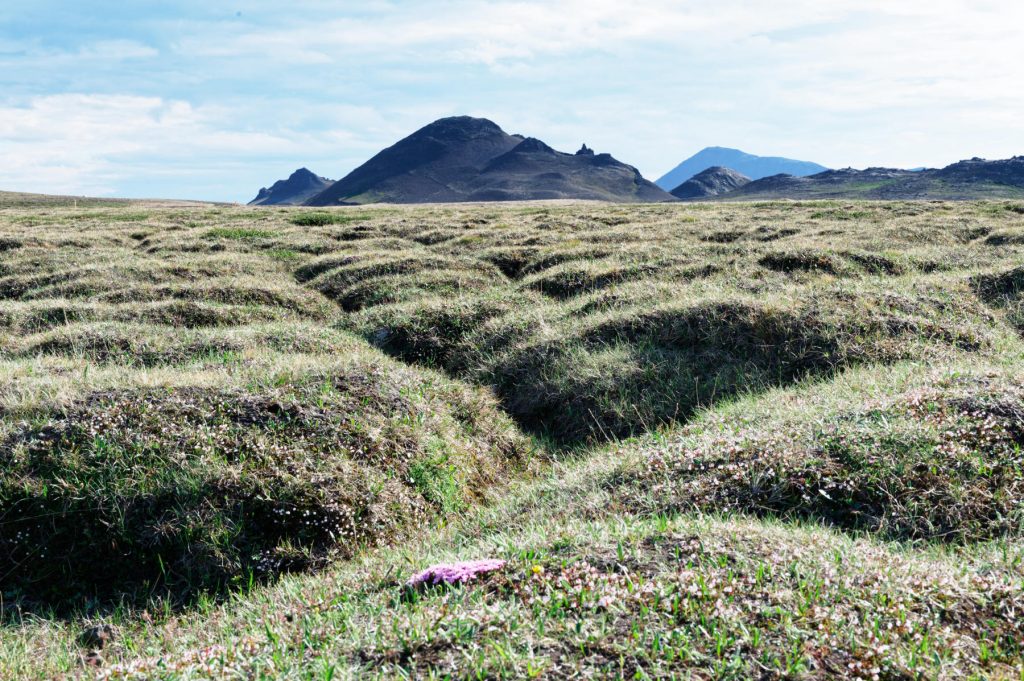 (Jane has to take the credit for setting up the last shot for me – pointing me in the right direction after I’d been looking in the wrong place.).

We walked the area for about 90 minutes, marvelling all the way at the amazing landscape – just another facet of Iceland’s stupendous geology.

We then went to our hotel, the Fosshotel 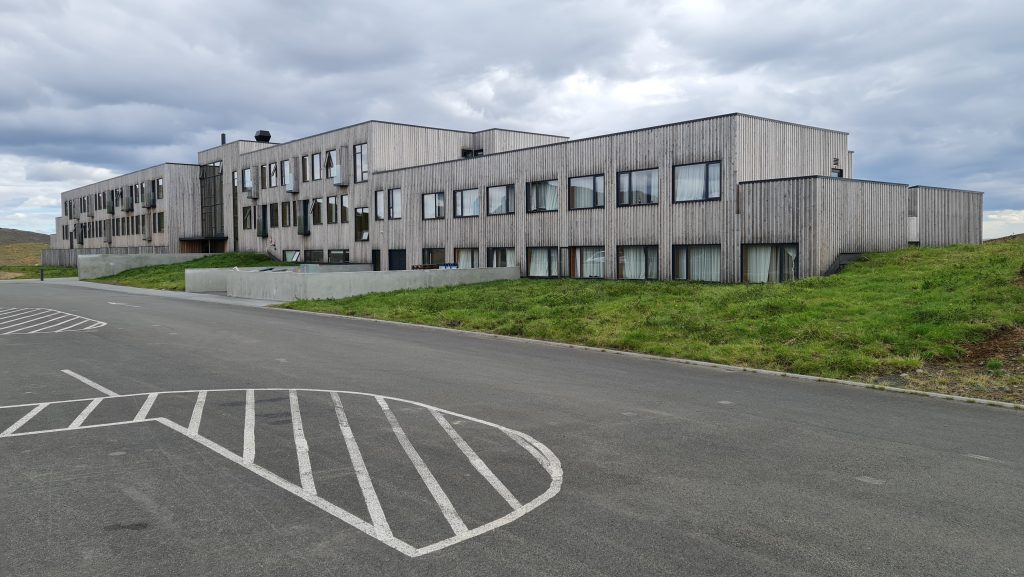 which proved to be very good – excellently organised rooms, good food in the restaurant, and it will be our pleasure to stay here two nights.  Mind you, Jane thinks the cocktail barman needs to up his game a bit.  We’ll see how he gets on when asked for a Boulevardier tomorrow evening…..

We have more waterfalls to see tomorrow, among other delights which I shall be sure to report in these here pages.  So do please come back again to catch up with the delights of our next day out.