Boobies seem to form the majority of the land-based wildlife action of the first two days on this cruise. Today, the activity was based around the Galapagos island of Española, at the south-eastern corner of the archipelago. The morning excursion was basically a hike around the island to see what was on offer. Apart from the ubiquitous sealions 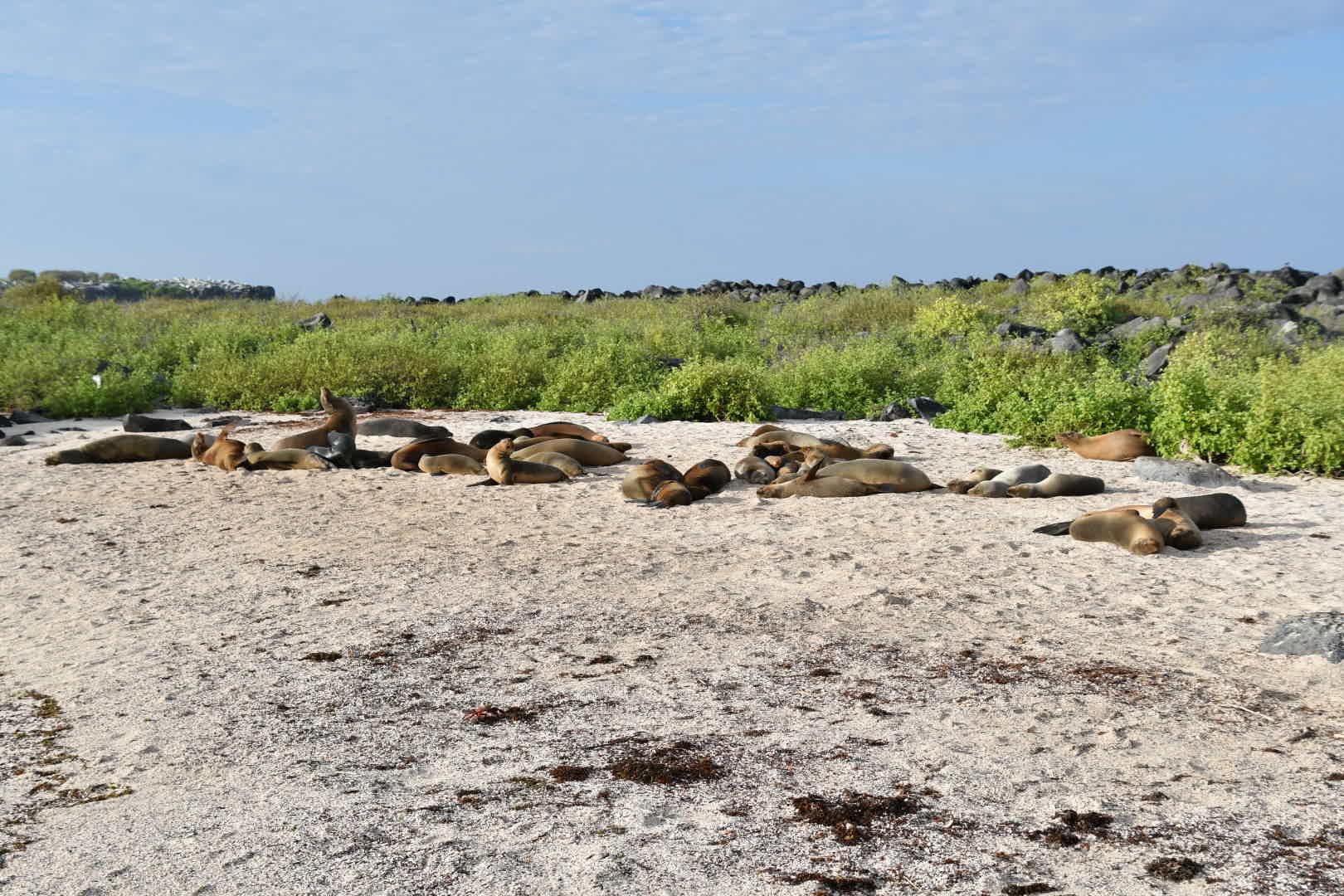 it became clear that there was going to be some serious marine iguana action, as there were plenty on the beach and surrounding rocks. 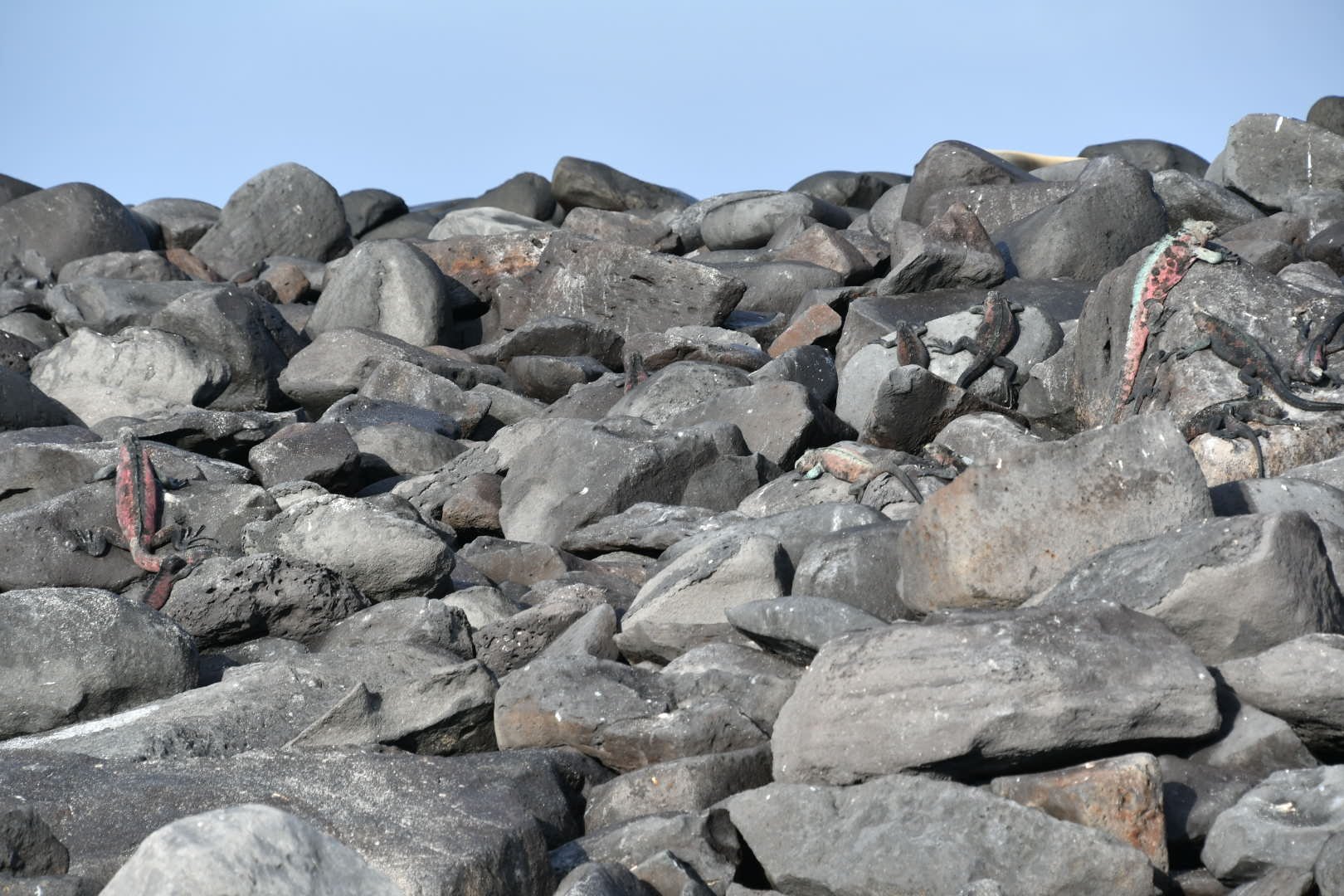 and after a while, it became equally clear that actually one had to watch one’s step, as, even though keeping carefully to a prescribed path, there was a serious danger of stepping on one. But it was great to see so many of them, in all of their various colours. 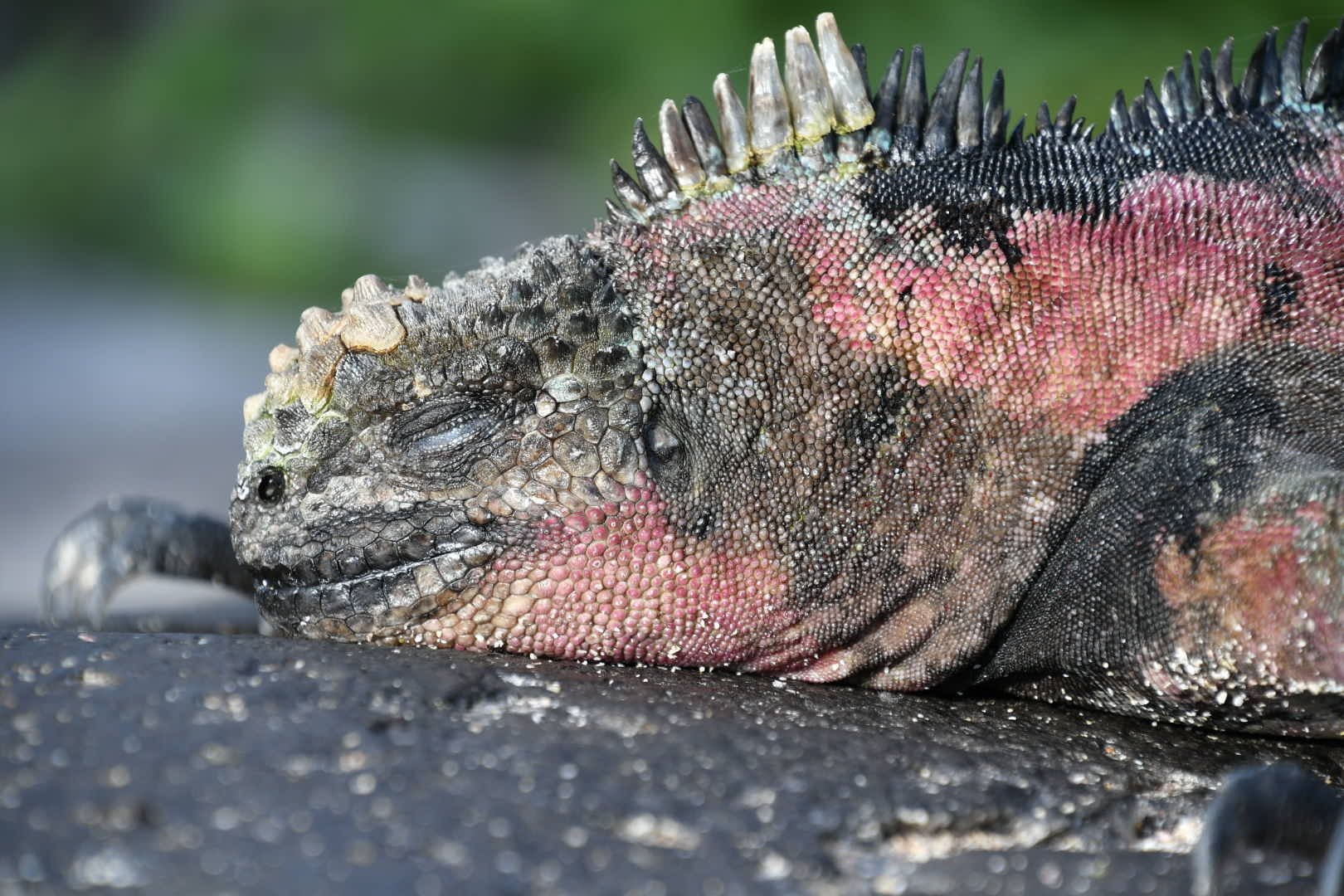 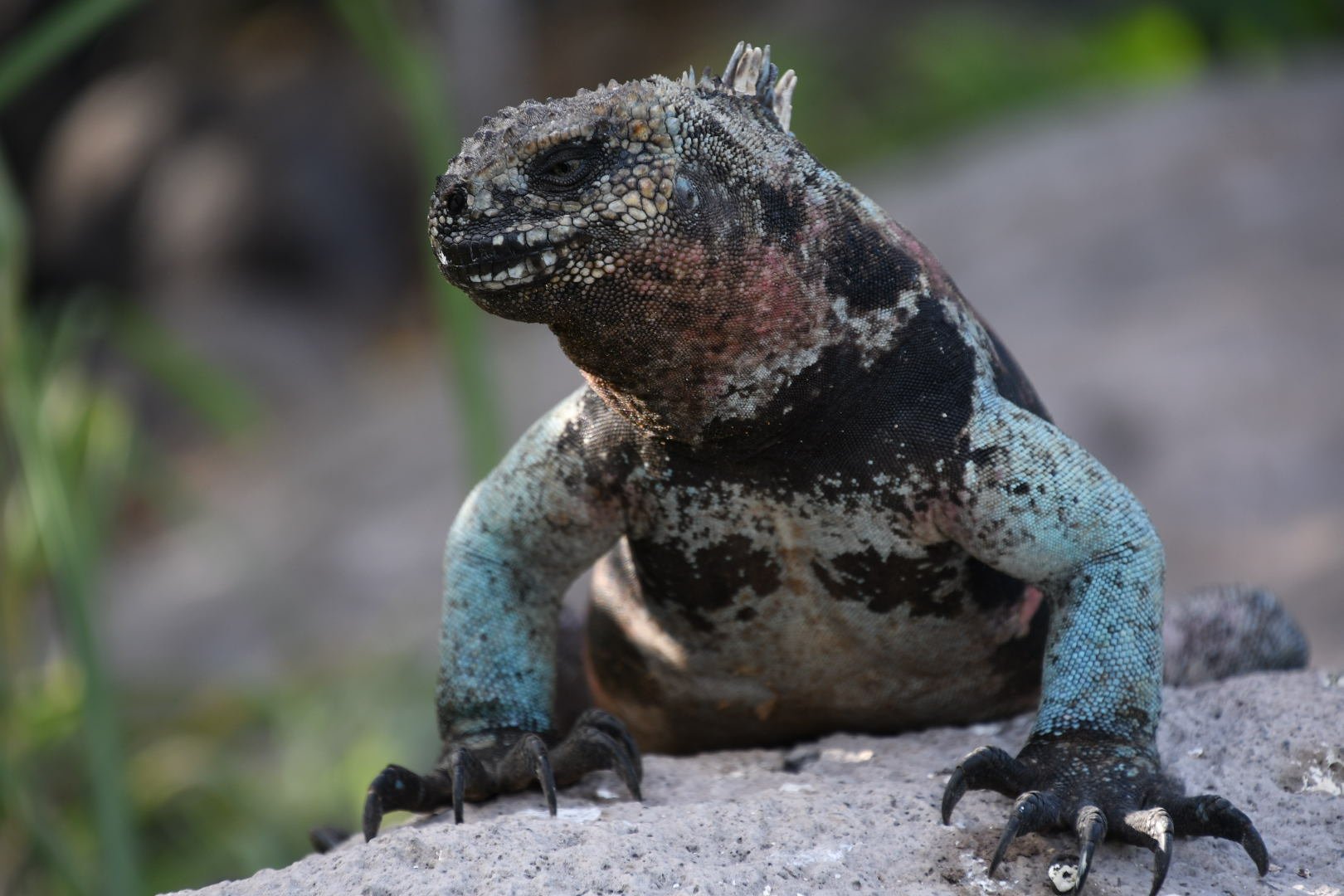 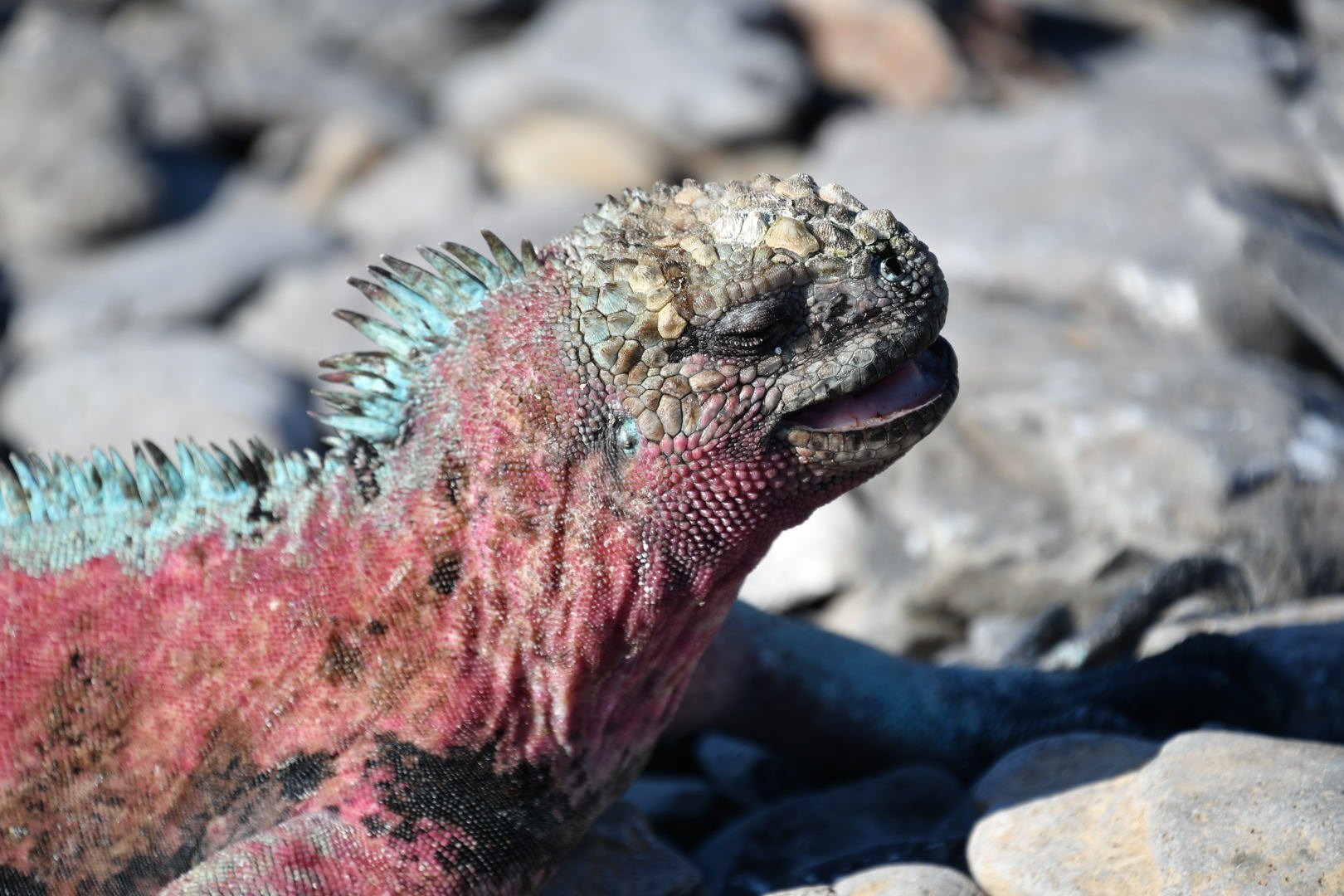 As well as the iguanas (marine iguanas exist only in the Galapagos, but there are 13 different varieties here), we also saw Sally Lightfoot crabs 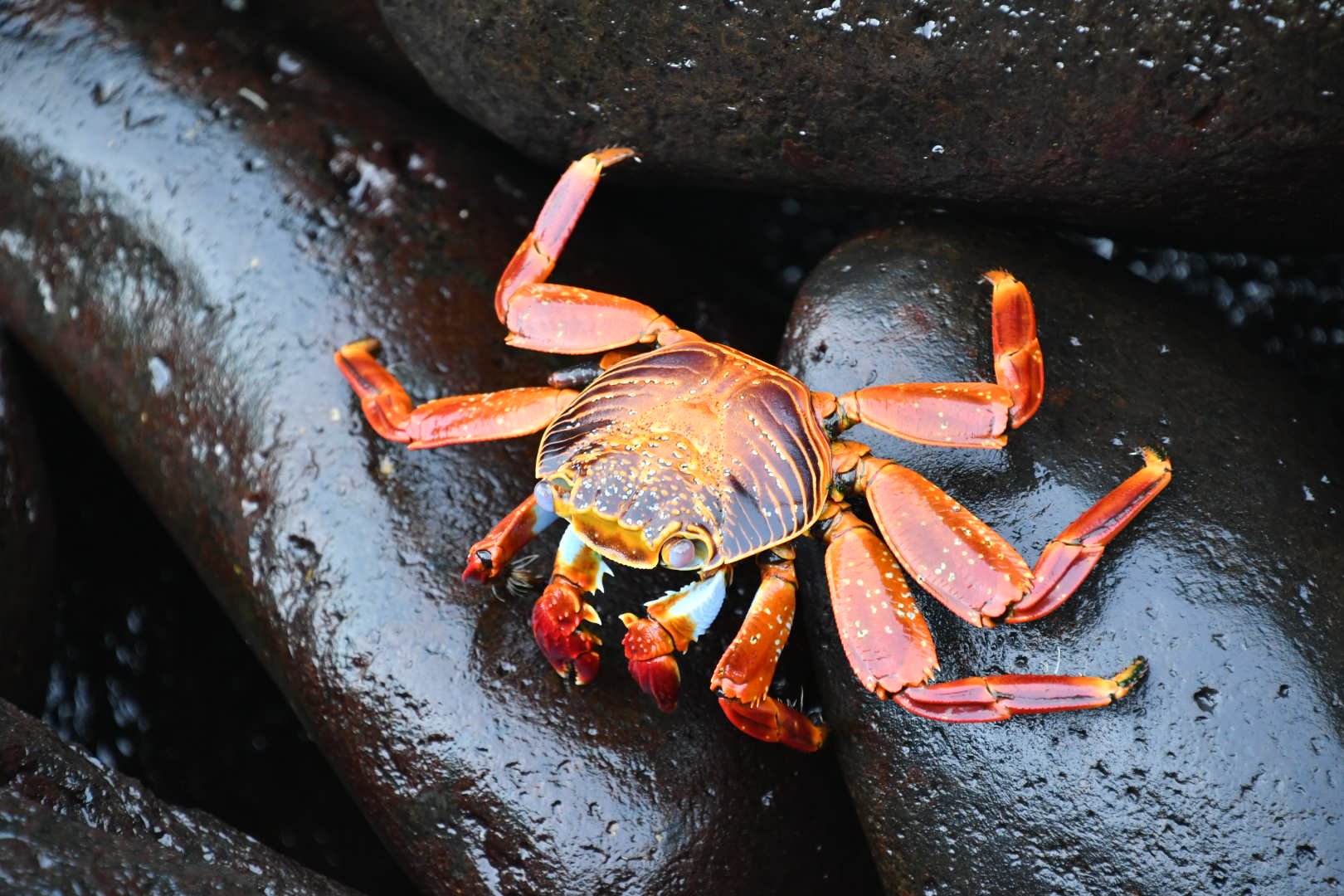 and much bird life, including the Galapagos Dove 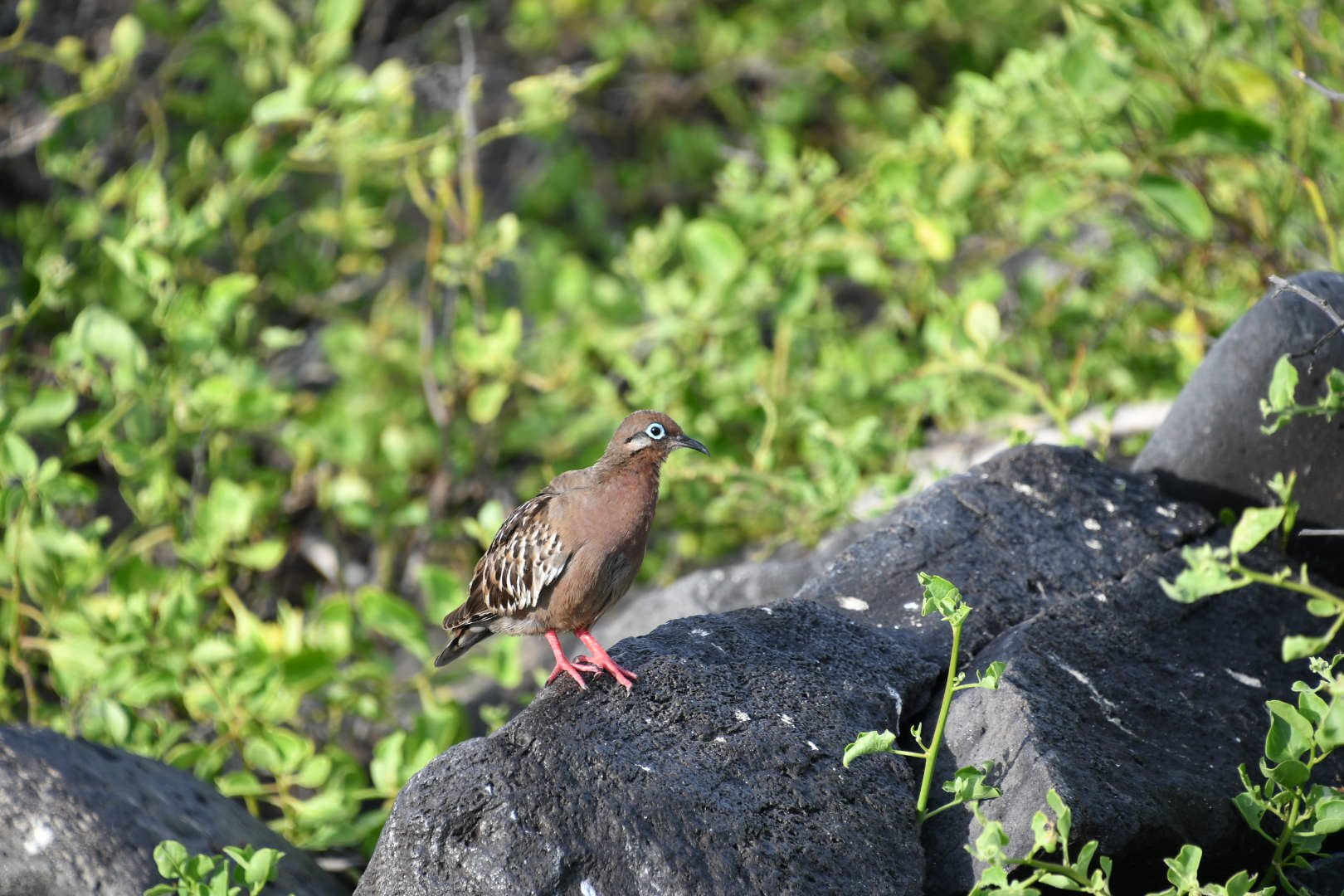 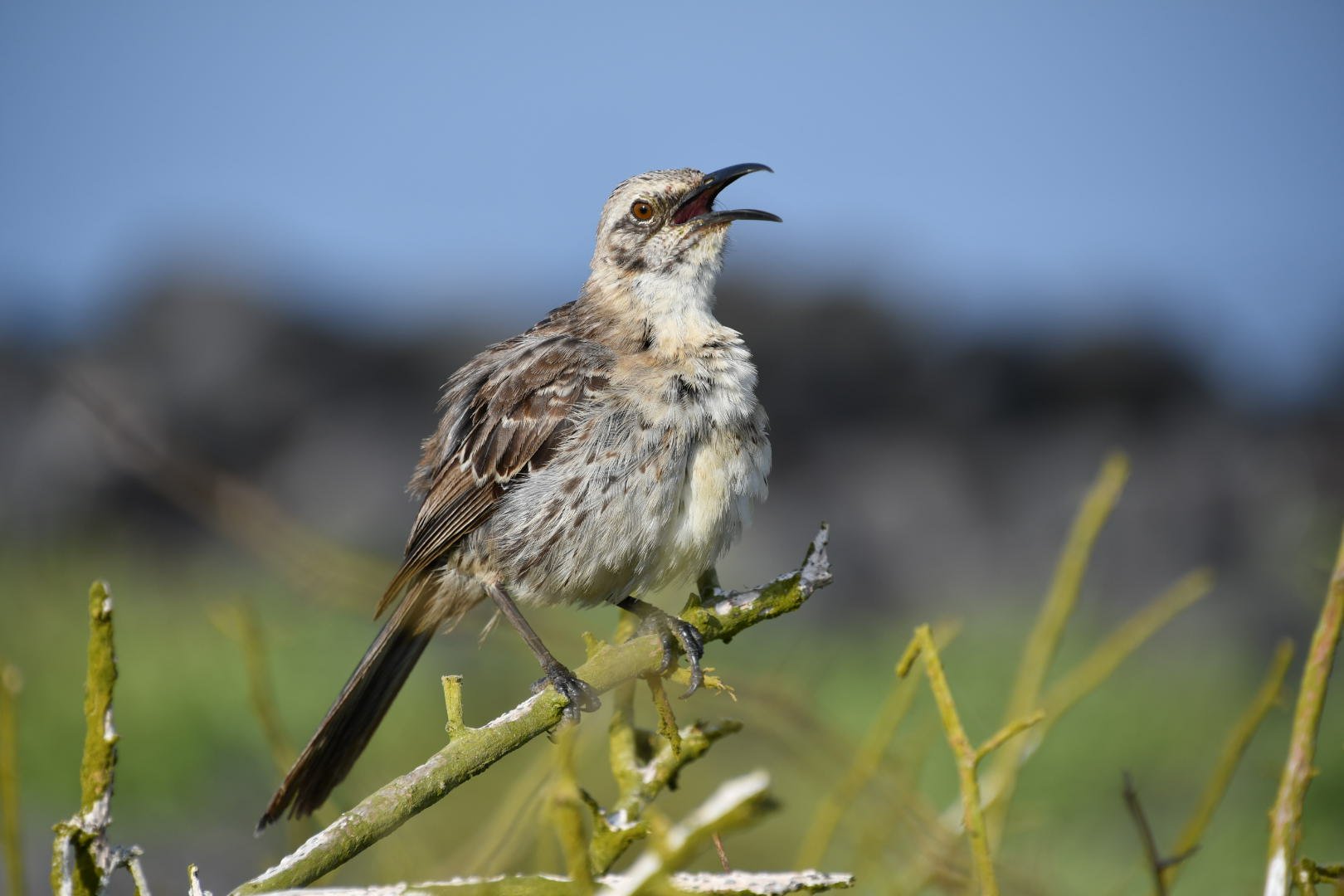 the brown Pelican (the only sort found in the Galapagos) 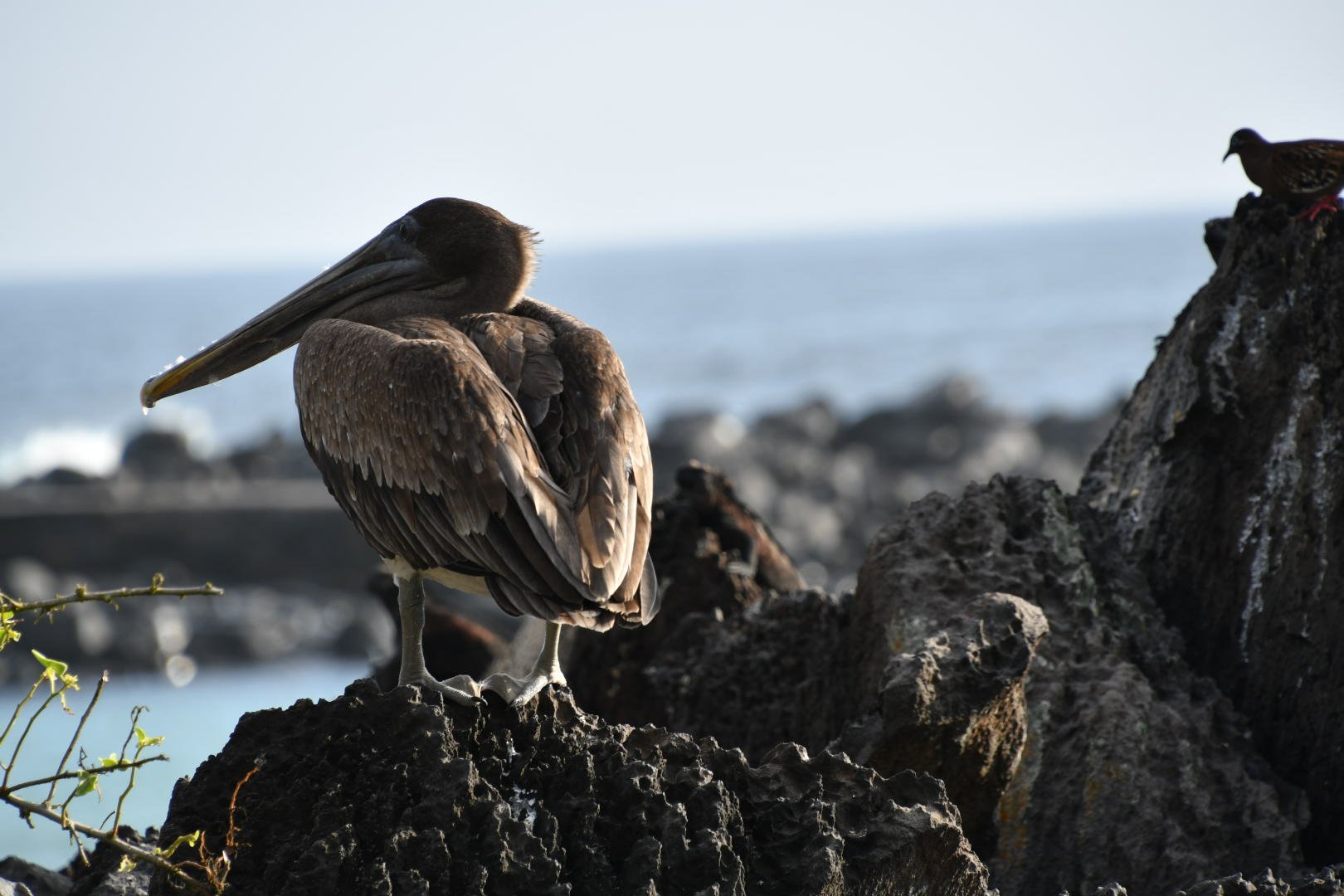 a Yellow Warbler (called, very charmingly by our guide Natasha, a “Yellow Wobbler”) 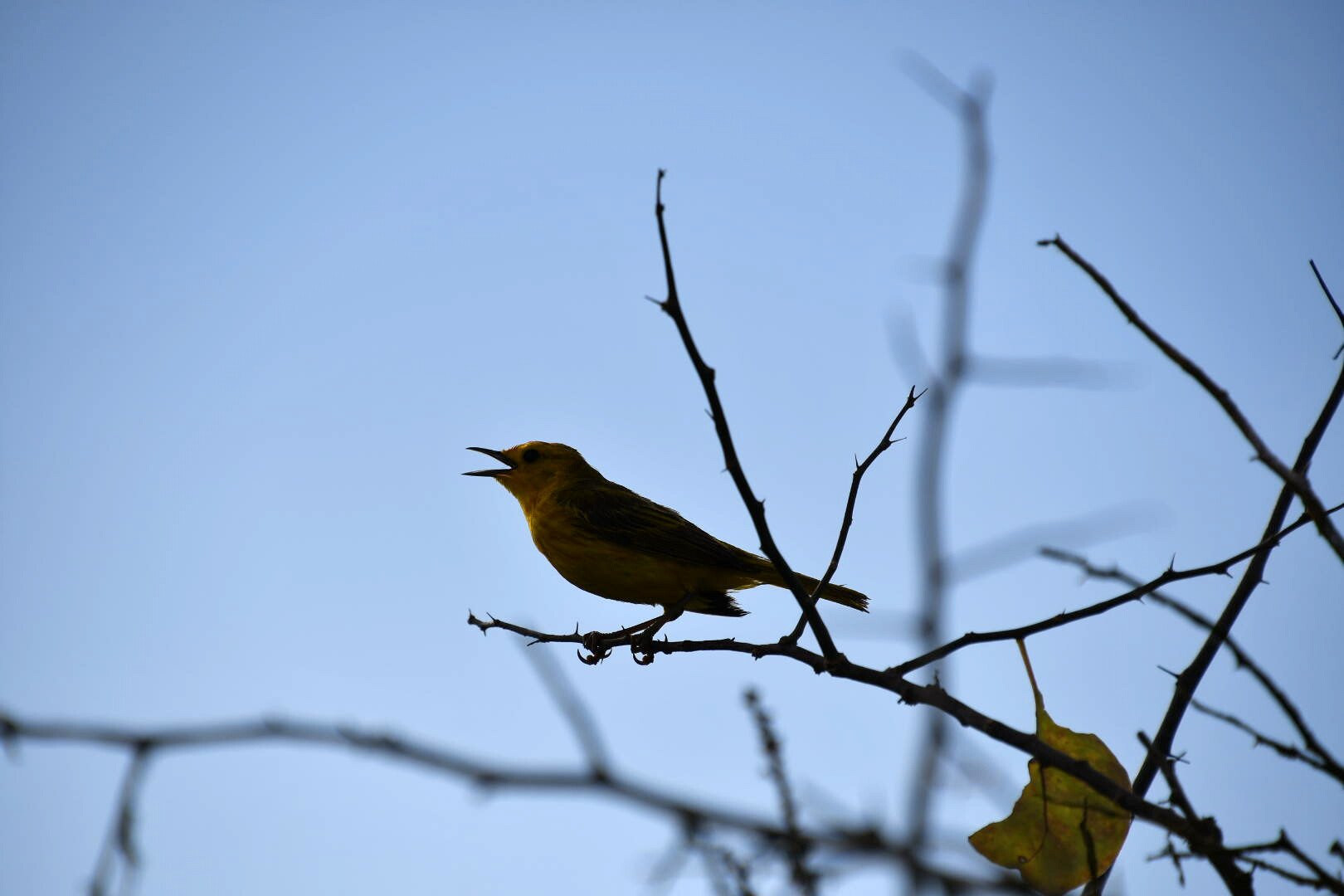 and one (who knows which) of the thirteen species of Darwin’s Finch, the key to identification being the size and shape of the bill. 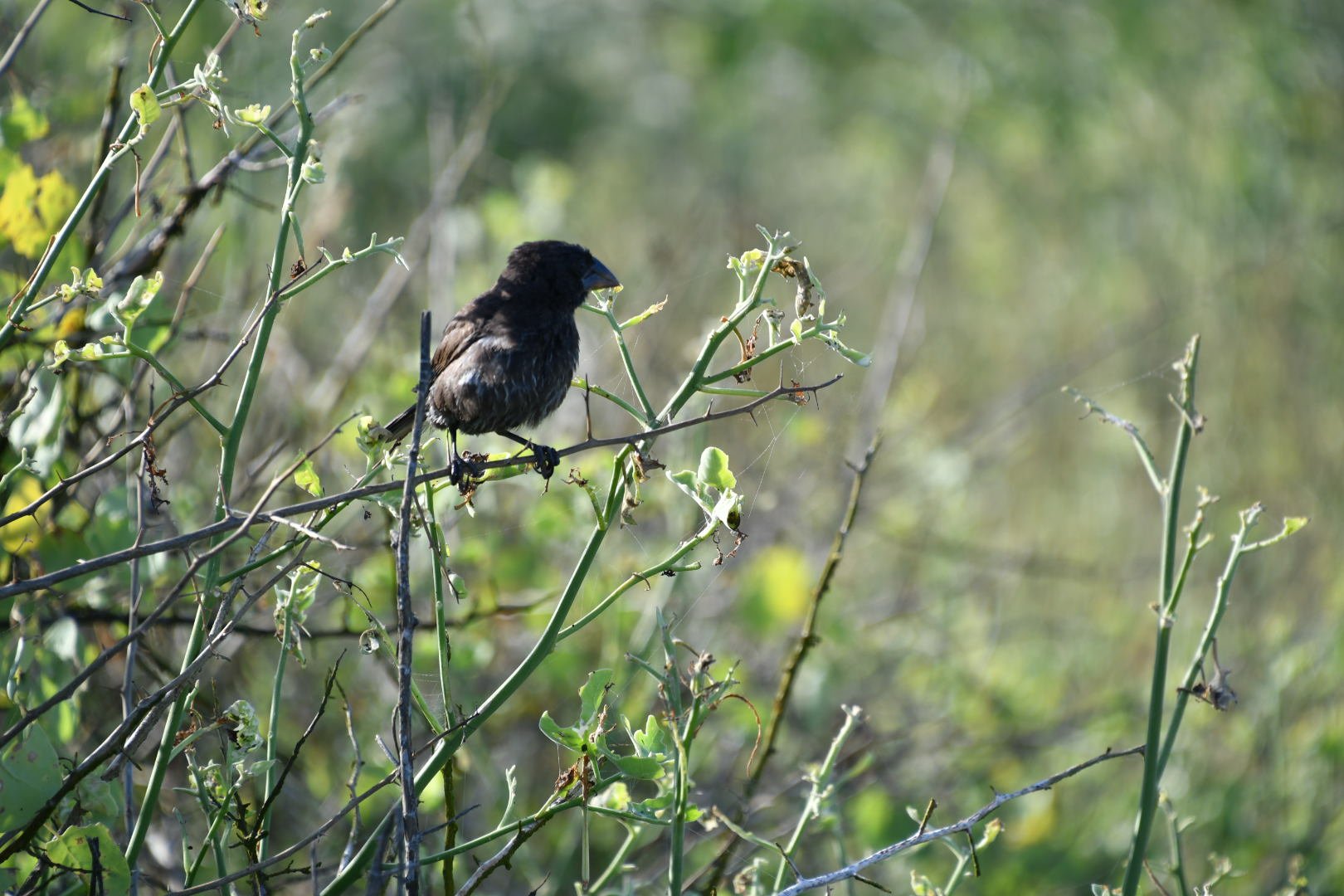 All this was within a few metres of the start of a 2-mile hike in increasingly hot conditions. But it got more and more interesting as we walked around.

We saw a site where many, many iguanas were setting up and guarding their burrows. This involved a certain amount of aggro as one female iguana tried to make sure that no other females came near her burrow.

And the other side of the track, there was a cliff down which iguanas could be seen climbing, and entering the sea to feed.

We also caught a glimpse of the other kind of sealion to be found in the Galapagos, the furred sealion. 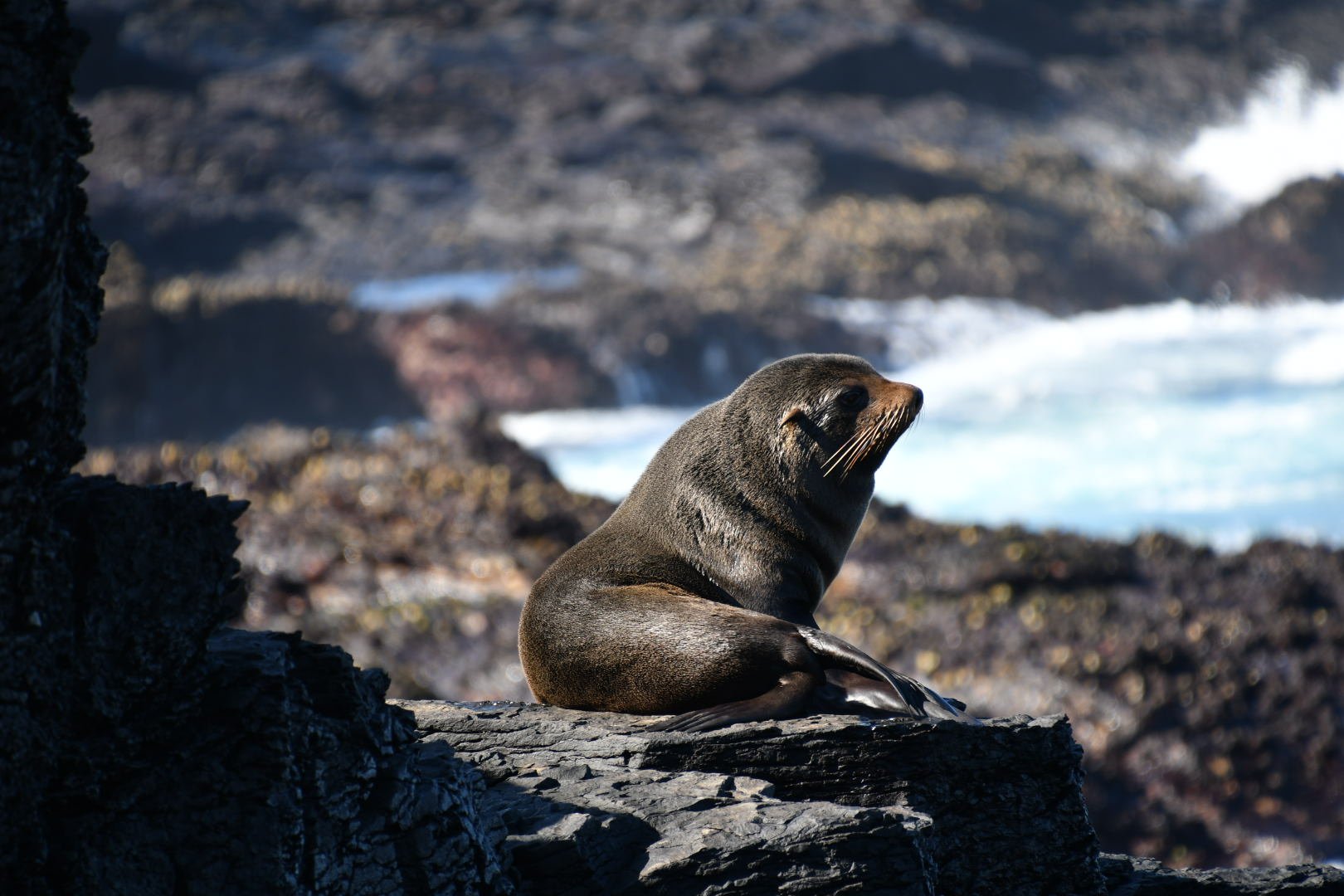 But actually our attention was mainly taken up with a colony of Nazca Boobies, the largest of the three sorts to be found here.

There were lots and lots of them, from newly-hatched youngsters 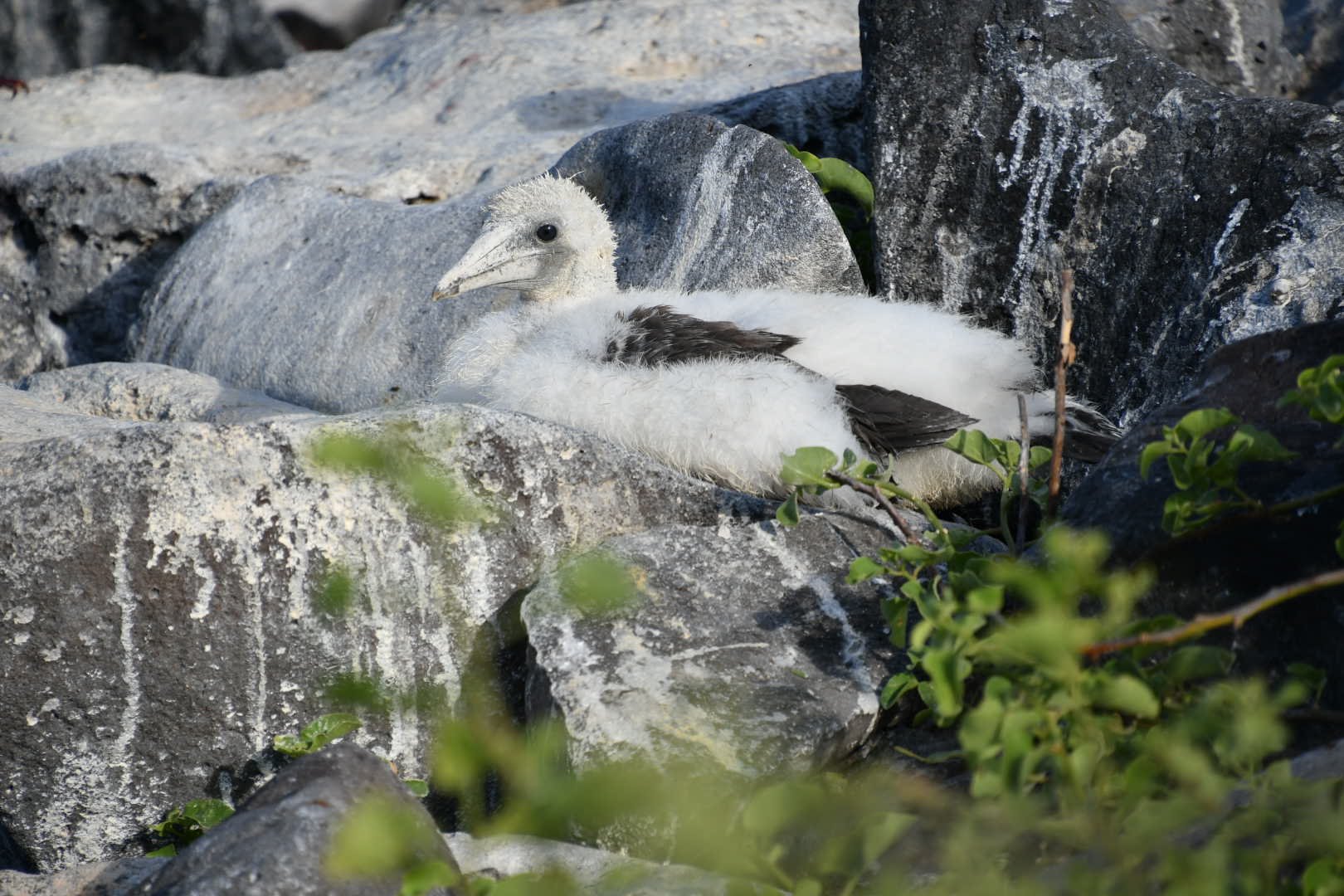 many of which were demanding to be fed 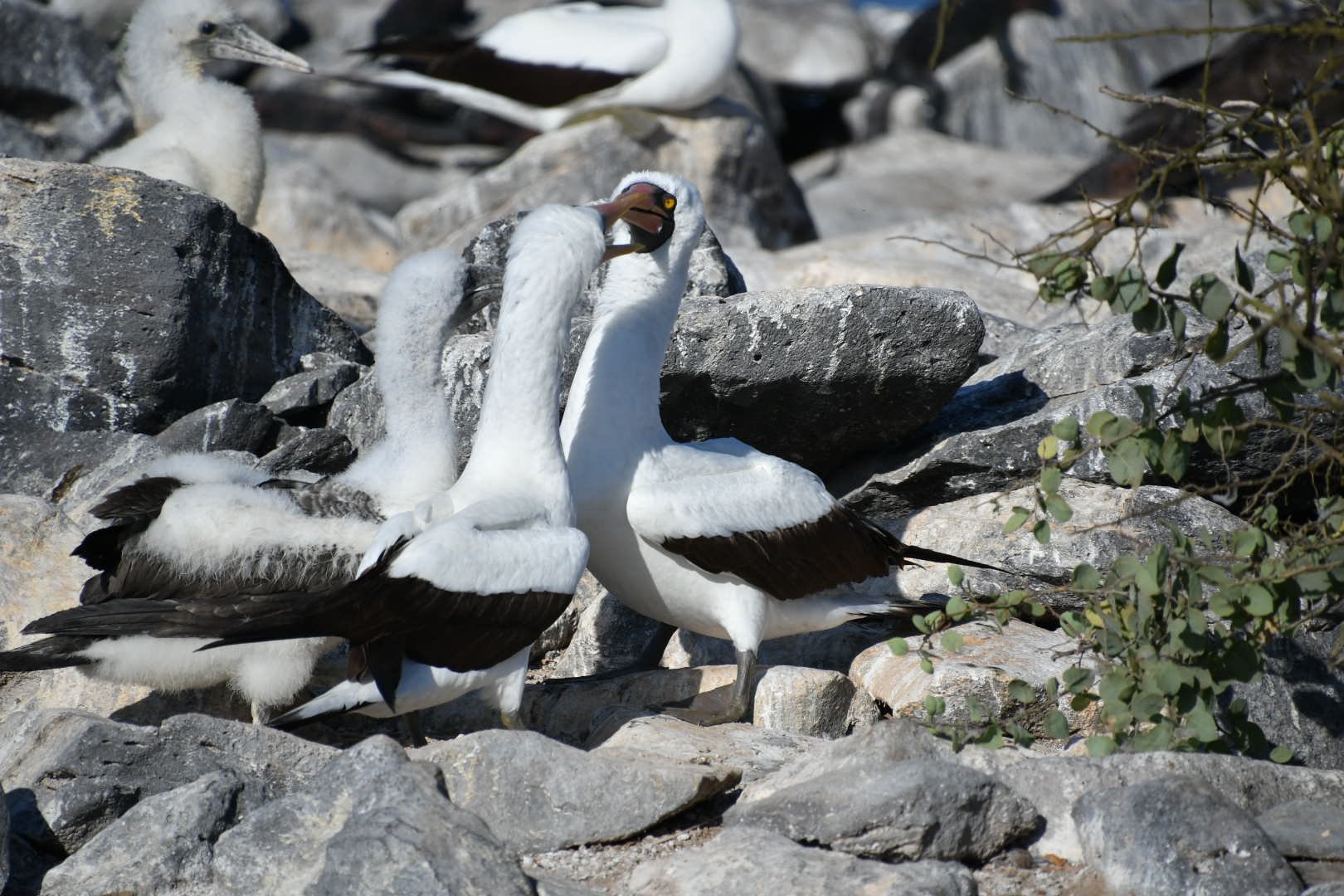 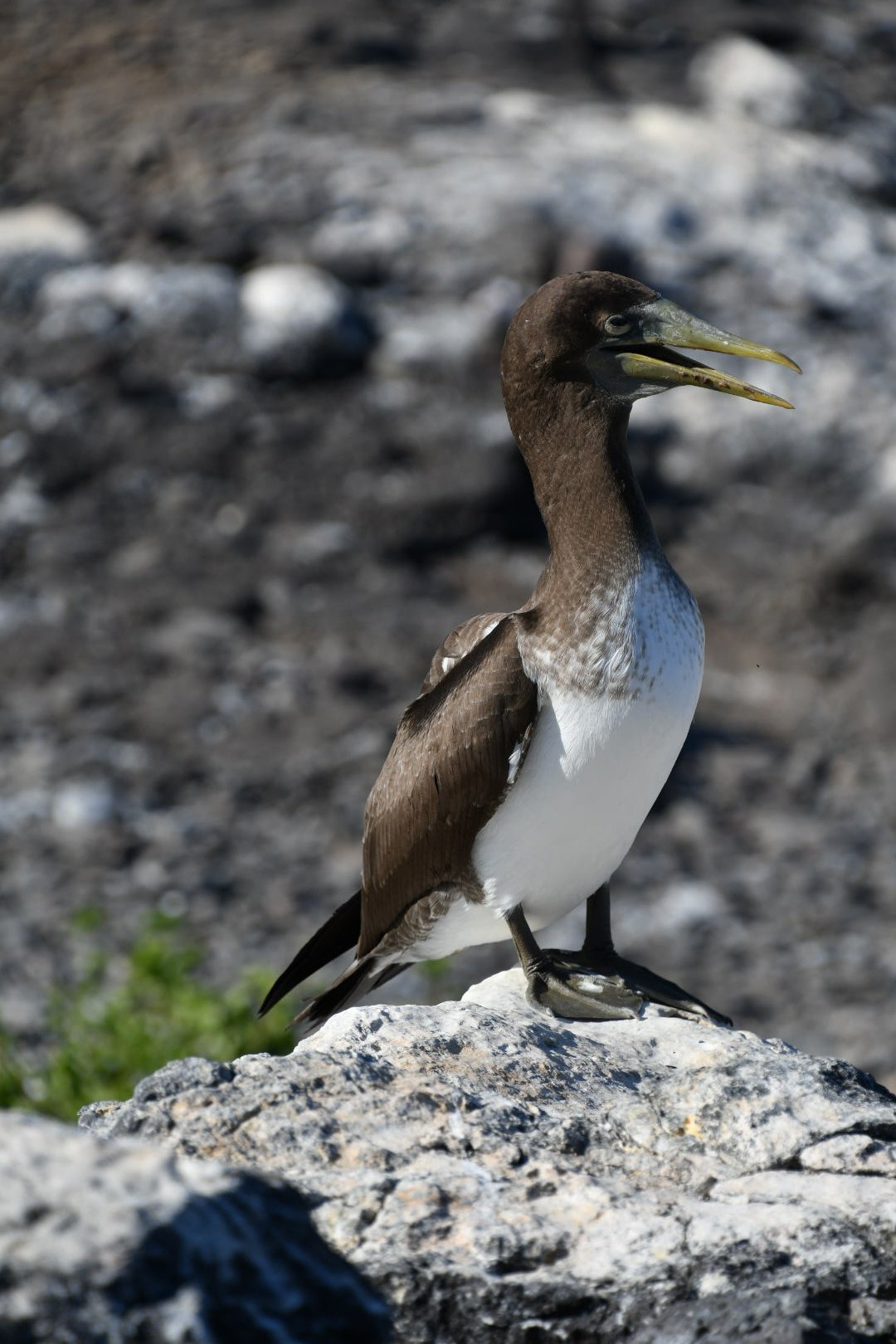 to adults, many of whom were raising chicks. 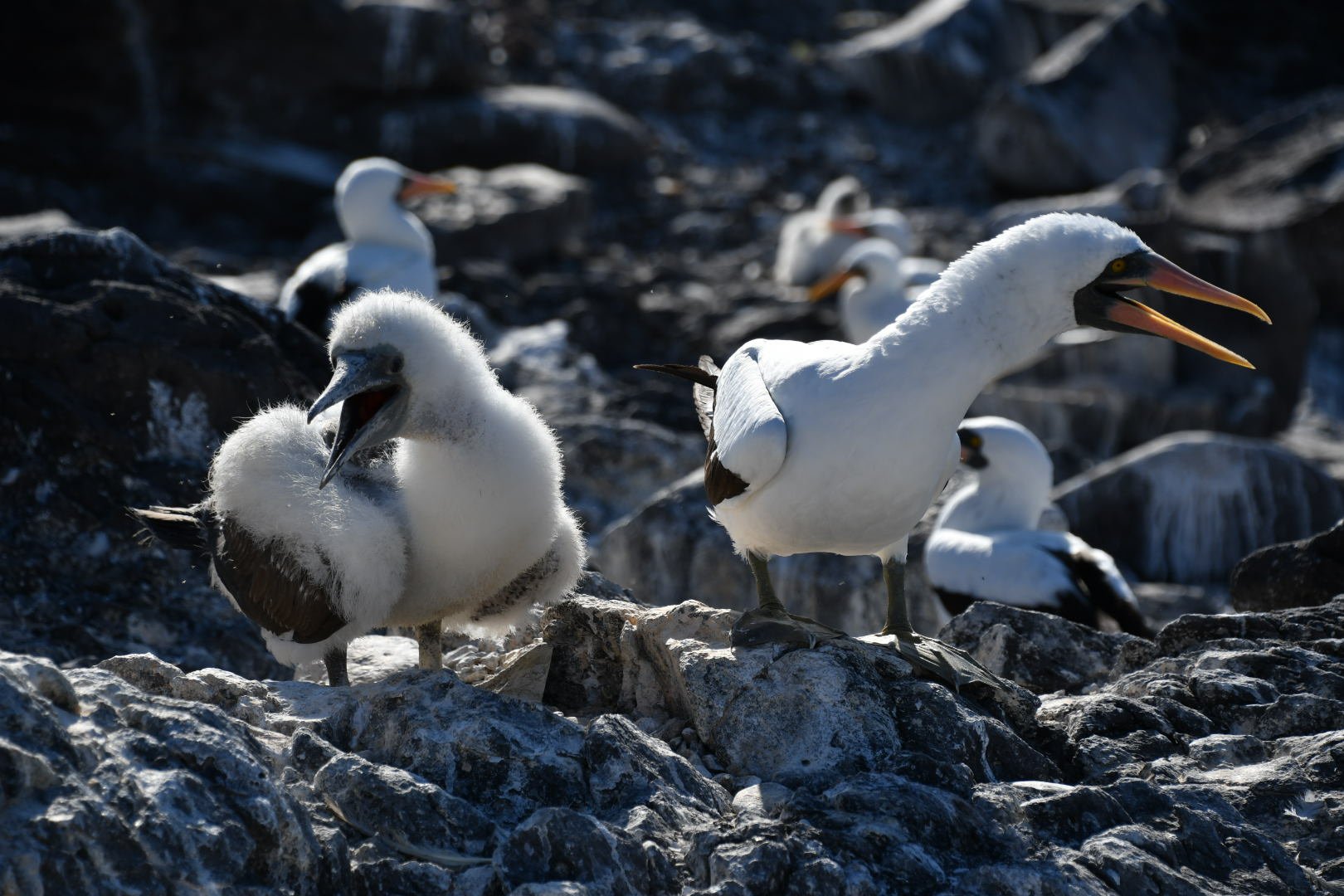 And of course the whole area was shared with the island’s other wildlife. 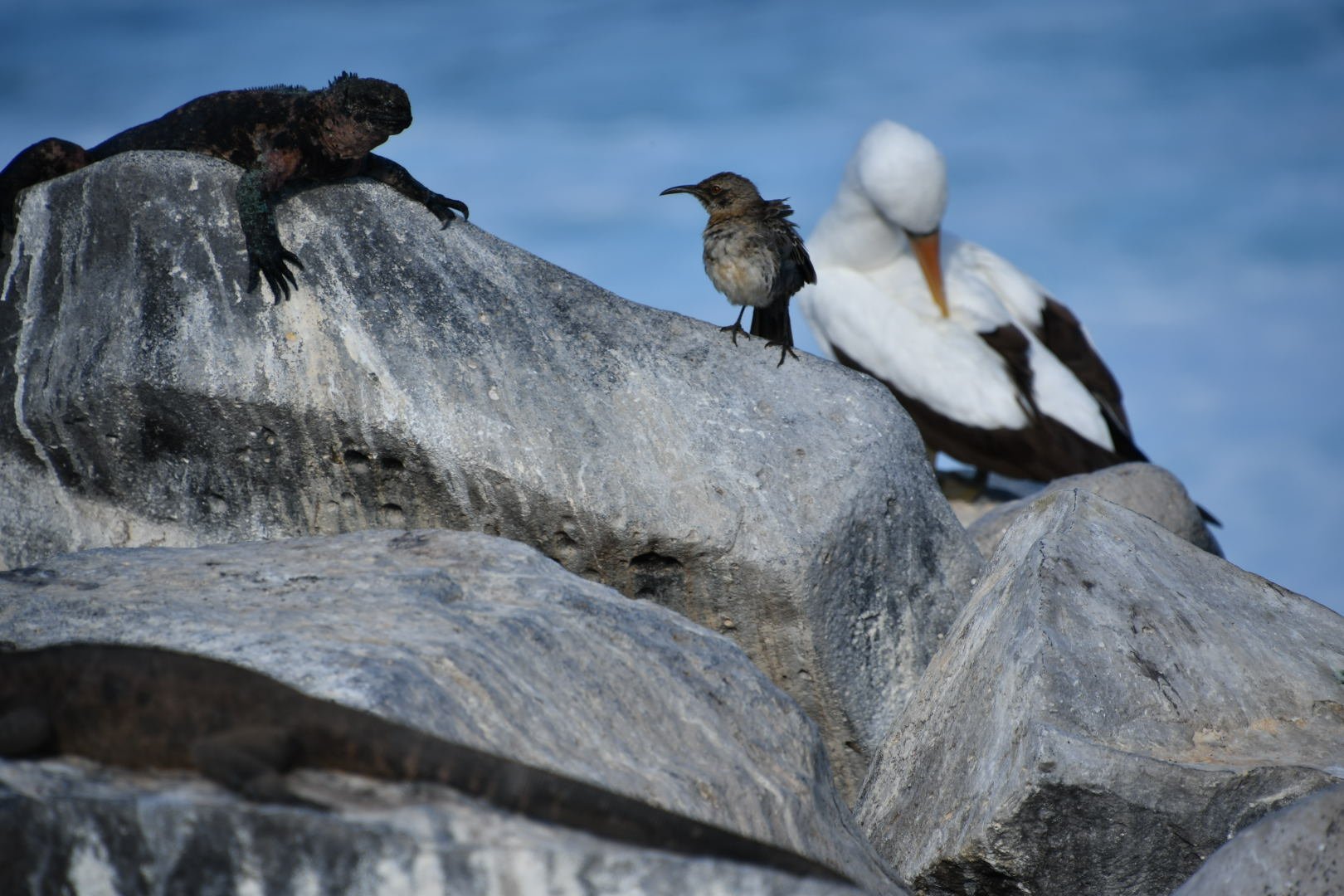 Around this point, at the northern end of the island, some people swore they saw an albatross. If so, it would have been a very early arrival, as they arrive during April to mate and breed and this was April 3. Maybe they did, maybe they didn’t. I certainly didn’t.

A little further on we had a bit of geological entertainment in the form of a blow-hole, which was both dramatic and beatifully colourful

and we also spotted a Galapagos Hawk in the distance. 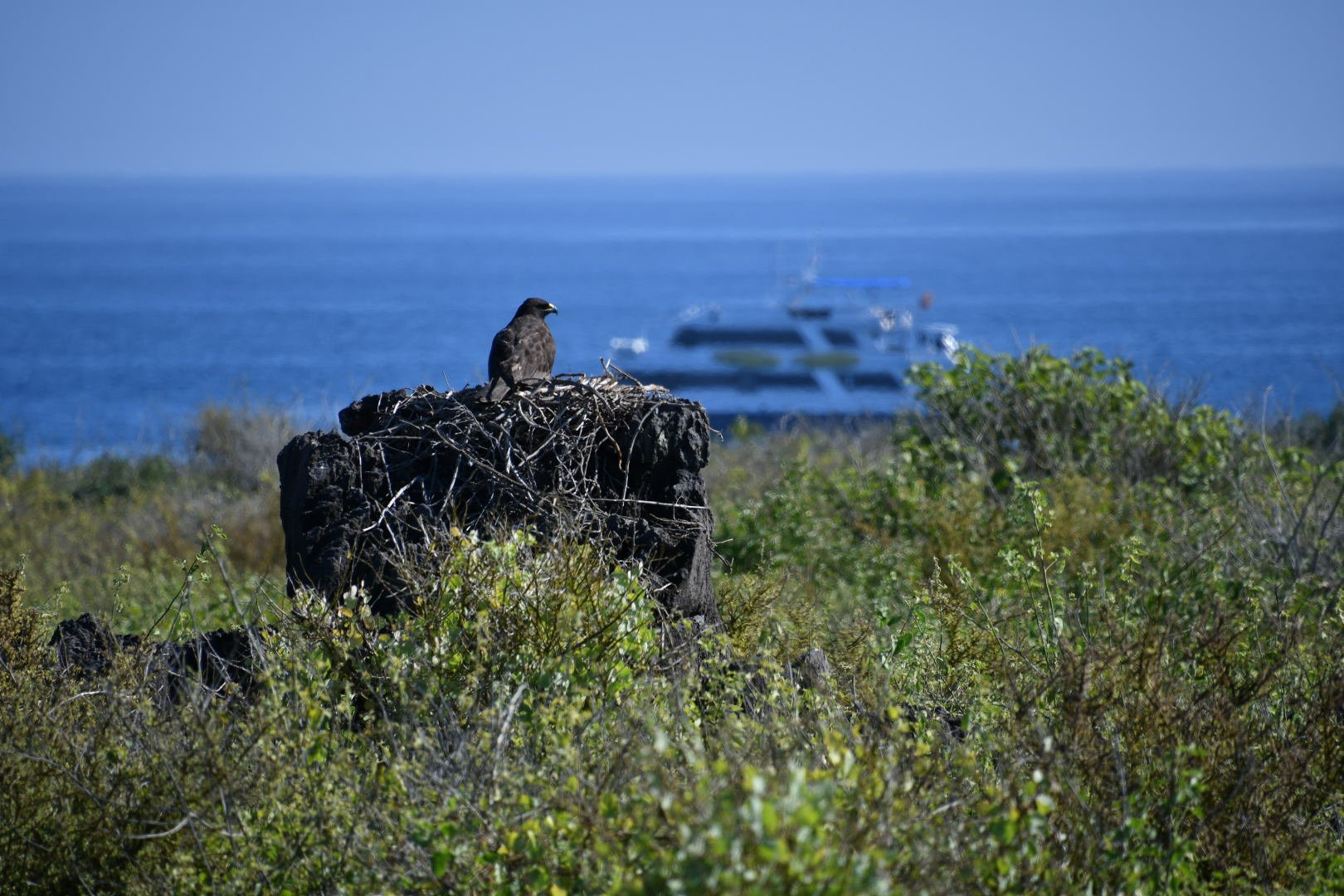 So it was a day of seeing some familiar and some new things. It was very hot by the time we finished, and so it was a blessed releief to get back to the ship and a nice cold drink. We were lazy the rest of the day (as I say, these blogs don’t write themselves) and with all of the photographic goodness from the morning to deal with, an afternoon of organising and writing and drinking beer beckoned, rather than the paddleboarding, snorkelling and beach (more bloody sealions!) offered. And so we had a relaxed afternoon, thinking we would save up energy for whatever the morrow had to offer. However, Mother Nature had one more surprise in store for us.

As yet another good dinner on the excellent M/V Origin drew towards a close, there was an excited announcement from the naturalist leader on the boat – sharks!

So we all congregated at the stern, where, in the ship’s lights, we could see shoals of fish swirling about. Two things made this unusual: firstly, the shoal was being hunted by maybe a dozen 2-metre long Galapagos sharks; and secondly, these were flying fish. There followed about half an hour of extraordinary scenes as sharks rushed in to attempt to take fish and the fish, in turn, took to the air to escape. It was an amazing scene, but very difficult to capture. Here’s the best attempt I made to capture the somewhat febrile atmosphere of the whole thing.

This was a remarkable, very unusual scene, and something we felt privileged to have seen. It’s been a lucky excursion – boobies with three eggs and indeed elsewhere with three chicks; leaping dolphins (you’ll have to read the next entry for that); fighting iguanas; juvenile flamingoes; we feel that we’ve got great value and insight out of our time here – and it’s not over, by any means.

I’ve mentioned before that we got chatting in one of our various check-in queues, to a nice Australian couple. Their Galapagos experience included one lady passenger who steadfastly refused to leave the boat to go to see the wildlife, or swim, or do anything. It’s possible that this might have been a reaction to the slave-driving that goes on on the Galapagos boats – up early, quick breakfast and then off on the day’s activities, which run steadily through the day until dinner. Any illusion that you’re on a holiday can quickly be lost. One chap on Origin declared it to be a “boot camp”, though I suppose “boat camp” might be better.

Actually, of course, one is on holiday, and so you can decide not to join in on things if you don’t want; and on the first full day I decided to pass on the snorkelling excursion that followed the morning hike (Jane had more courage than me, and decided to go for it).

But the morning hike itself, at Punta Pitt on the north side of San Cristobal Island, was an enjoyable excursion, albeit after a night of limited sleep. (If I have one complaint about the Origin it is that the cabins are very noisy, as they are on the level just above the engines, and this made sleeping difficult this first night.) The excursion was described as having a “wet” landing, which means jumping off the RIB near the shore and hoping like hell that the water’s not too deep – particularly if wearing a backpack with expensive camera gear in it. Actually, the Origin crew managed it well; no-one drowned, and, more importantly, my cameras survived the experience. After a few minutes on the beach of desanding feet and putting on walking boots, we were off, in search of the Red-Footed Booby – San Cristobal Island is one of only two open to tourists where these can be seen. There are three sorts of booby in the Galapagos – blue-footed, red-footed and nazca. Red-footed are actually the most numerous, but blue-footed are more commonly seen.

and it soon became apparent that oportunities to photograph blue-footed boobies would be manifold. They were, frankly, everywhere, including in some cases, nesting on the track we were supposed to follow, so we had to detour around them.

This is how difficult it is to photograph blue-footed boobies:

That said, we were lucky because we were there in their mating season and so could see some of the characteristics of that. The males reserve a nest site by basically creating a circle of droppings, inside which they court females.

and, if a successful match is made, up to three eggs might be laid.

The male and female take turns to keep the eggs at just the right temperature – 39°C. If too hot, they stand and cool down, sometimes doing a particular panting action to cool themselves.

If all goes well, and food is plentiful, then the chicks hatch. This nest was unusual in that all three chicks have survived, indicating pentiful food.

And now the parents have a job to do to get enough food to feed a growing family.

We eventually reached the point of the island where there is a colony of red-footed boobies. These are more difficult to photograph, as they are the only booby species that is able to nest in trees.

but we saw a few, and also some chicks.

We weren’t limited to boobies, though. There was an immature yellow-crowned night heron

and many, many Frigate birds, cruising around looking for food to steal.

It was a good introduction to the pattern of our excursions’ activities and the wildlife of the islands.

The relentless stream of activities continued for the rest of the day, with opportunities for further snorkelling, and also kayaking, an activity accompanied by a ride in the RIBs, by the cliffs of San Cristobal island at Cerro Brujo (“the witch’s hill”). So there was an opportunity for some nice photos of people kayaking

And a nice view of a rock formation that (from some angles) looks like a boot, so is called Kicker Rock.

I didn’t snorkel – these blogs don’t write themselves, y’know – but Jane did, and reported that the water visibility was better, dammit. After that, we had a chance for a walk on a beach, so took up on that, as it required nothing more complicated then water shoes. And I’m very glad we did, as it got us some more booby action.

Near the shore at Cerro Brujo, the boobies were fishing, which was a wonderful thing to watch. I’m going to create some kind of animation from photos I collected, so watch this space. For now here is a handful of stills to give you an idea. 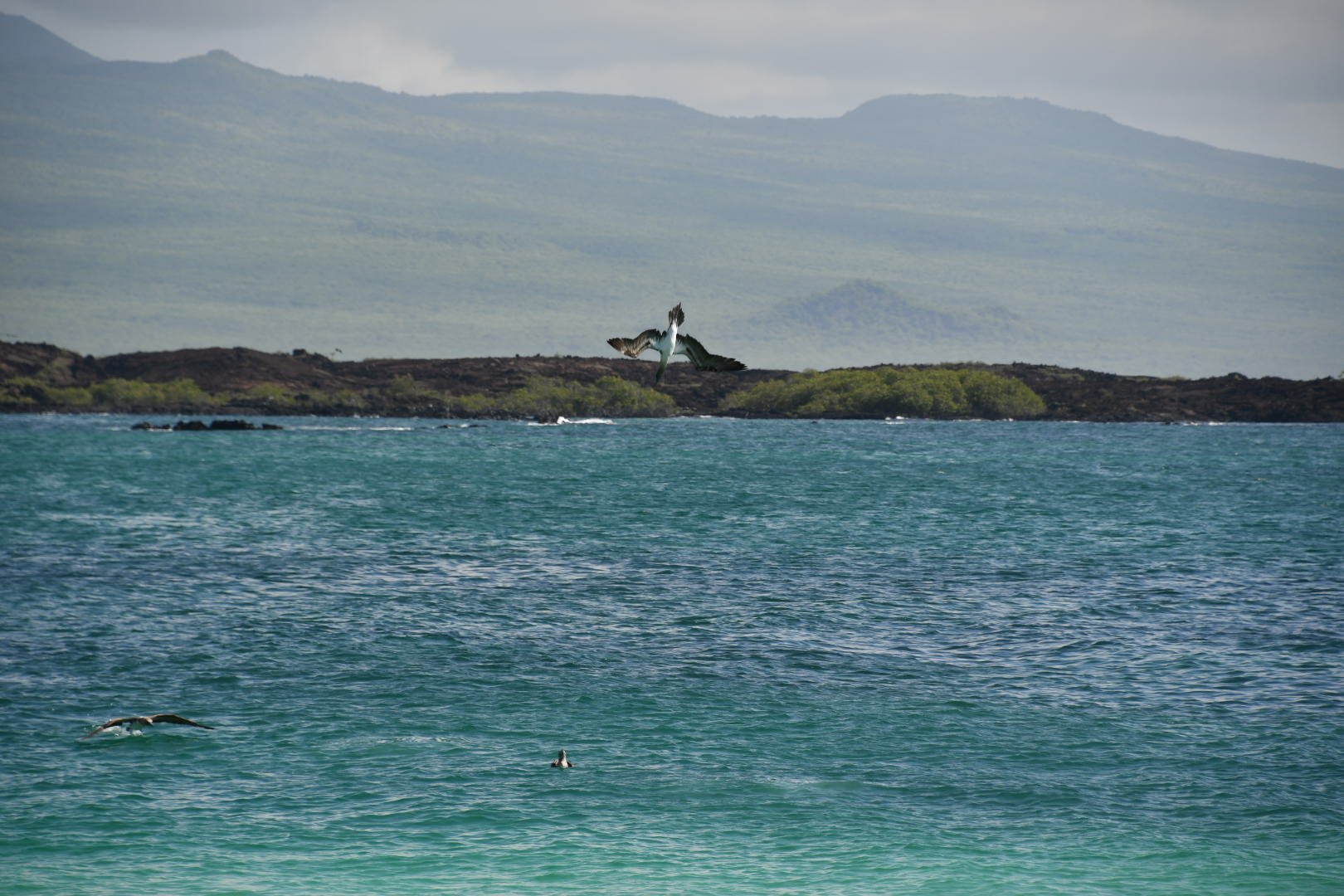 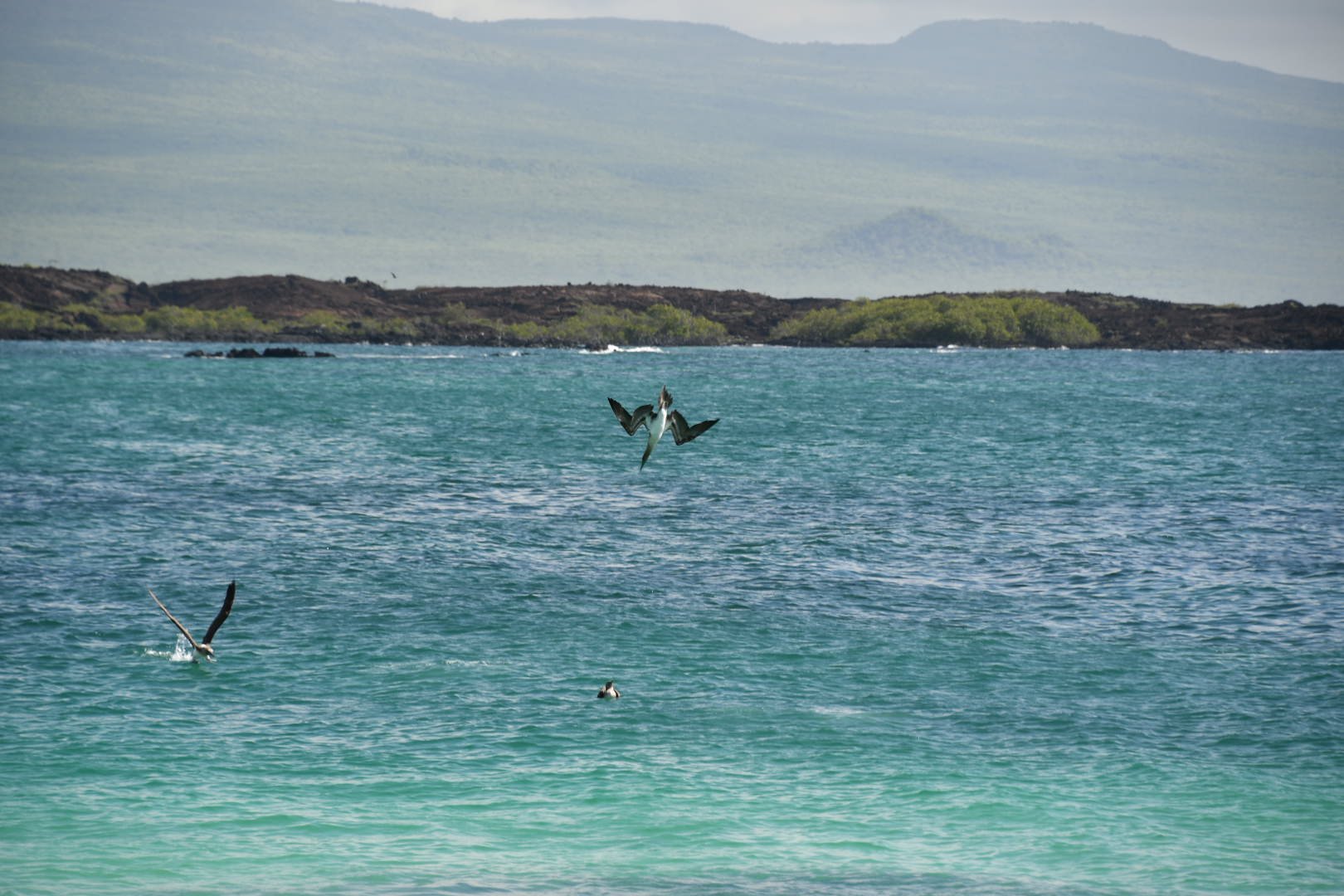 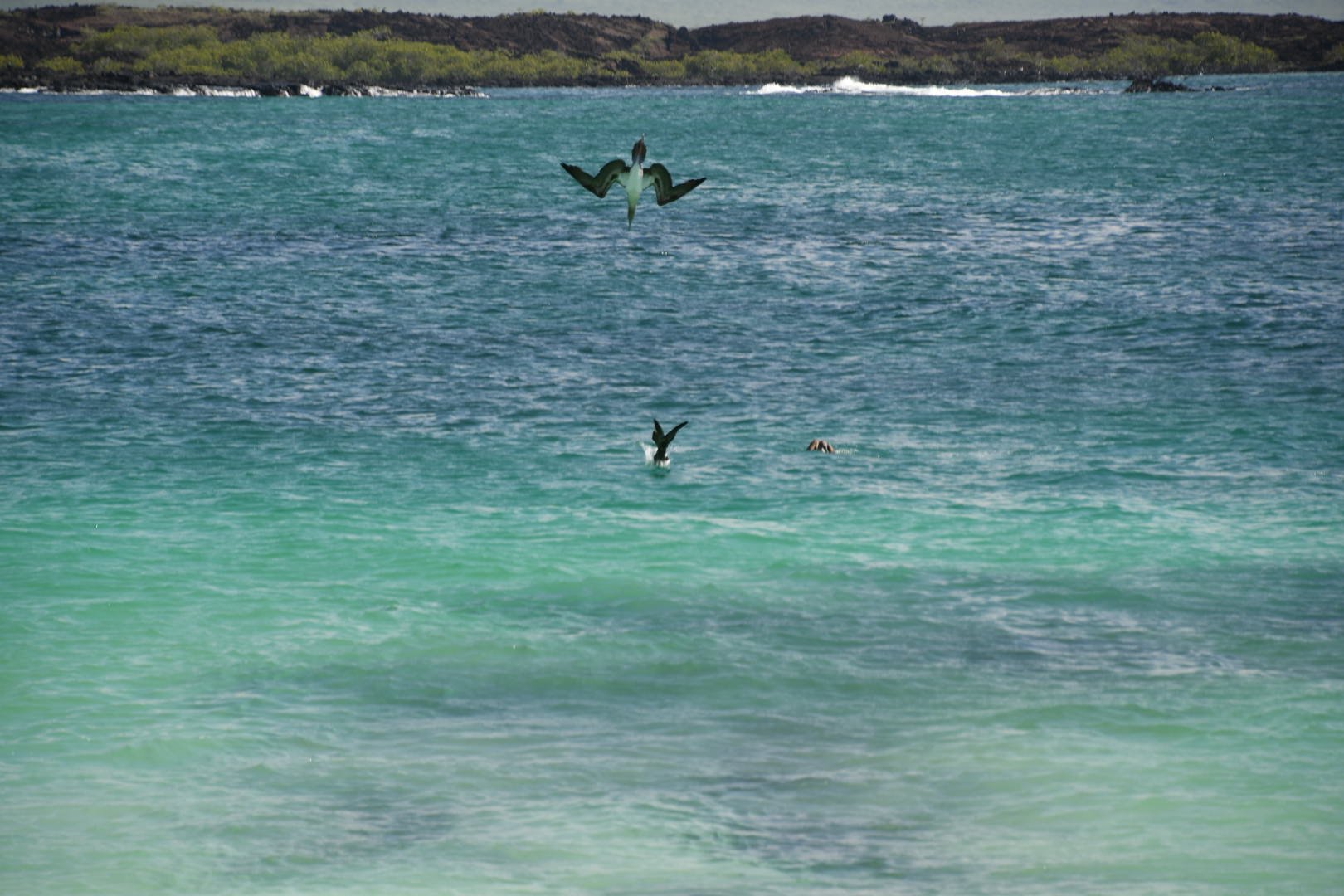 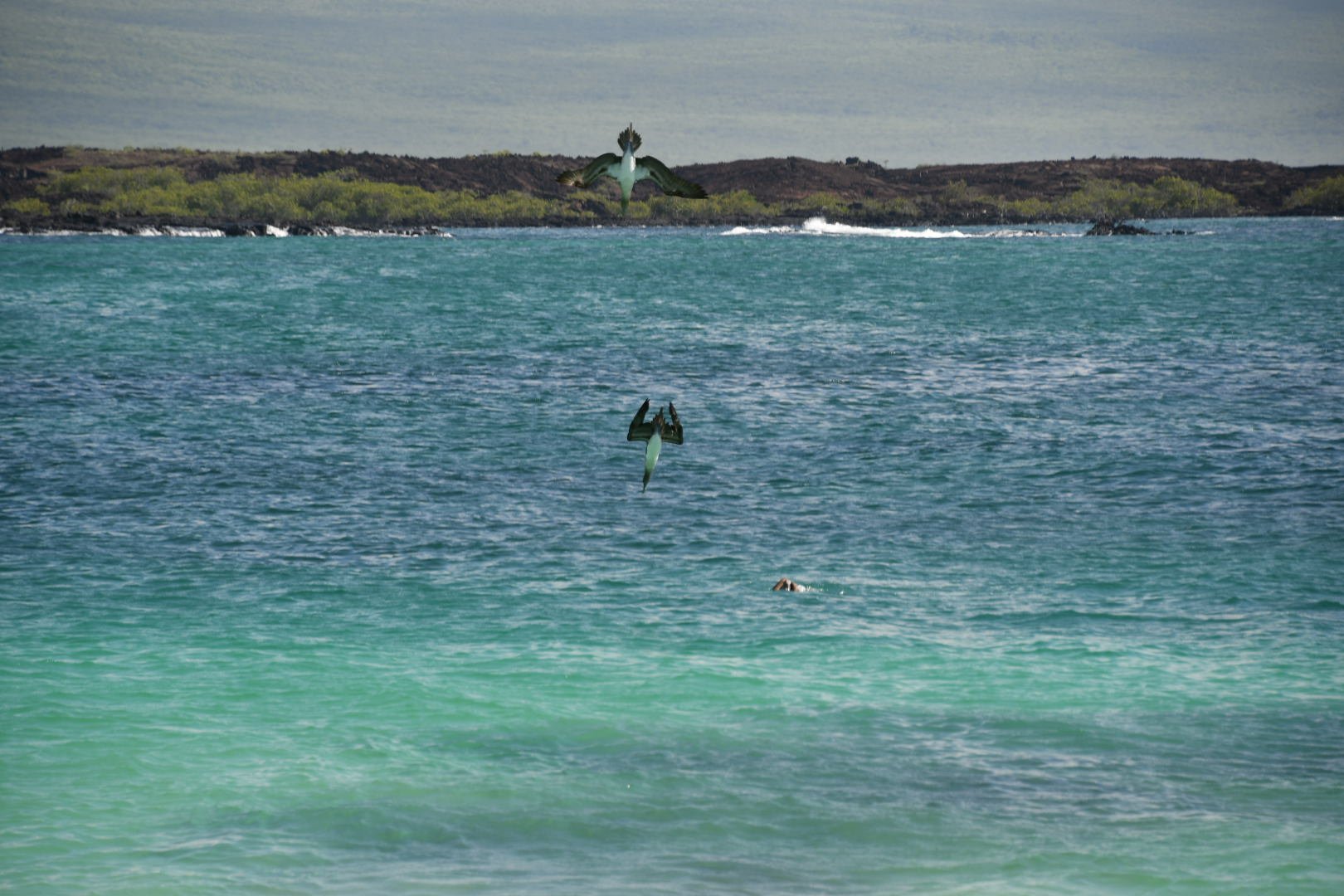 A heron was quite obviously awestruck by their skill.

Even the sealions took a peek.

All in all, this was an agreeable way to end the day’s activities and it nicely set up the first G&T when back on board. The challenge of the next days is clearly going to be simply that of standing the pace.