There are various different estimates of the number of moai on Easter Island, but “upwards of 900” seems to cover it. Some are near platforms and therefore count as official moai, some are in the quarry, some are just any old where and therefore can be presumed to have fallen and broken on their journey from quarry to platform. Ah, well, back to the drawing board. It only takes a year to make another. (And size doesn’t, as far as anyone knows, make much of a difference. The moai appear to have grown over the course of the culture, with later moai being bigger than earlier ones. But bigger ones don’t necessarily take longer, as you can have more men working on a larger statue.)

So, let’s wrap up the moai part of the Easter Island segment of our odyssey with some photos of many of those that have been restored. Firstly, and strikingly, one has been restored with replica eyes being put in place. 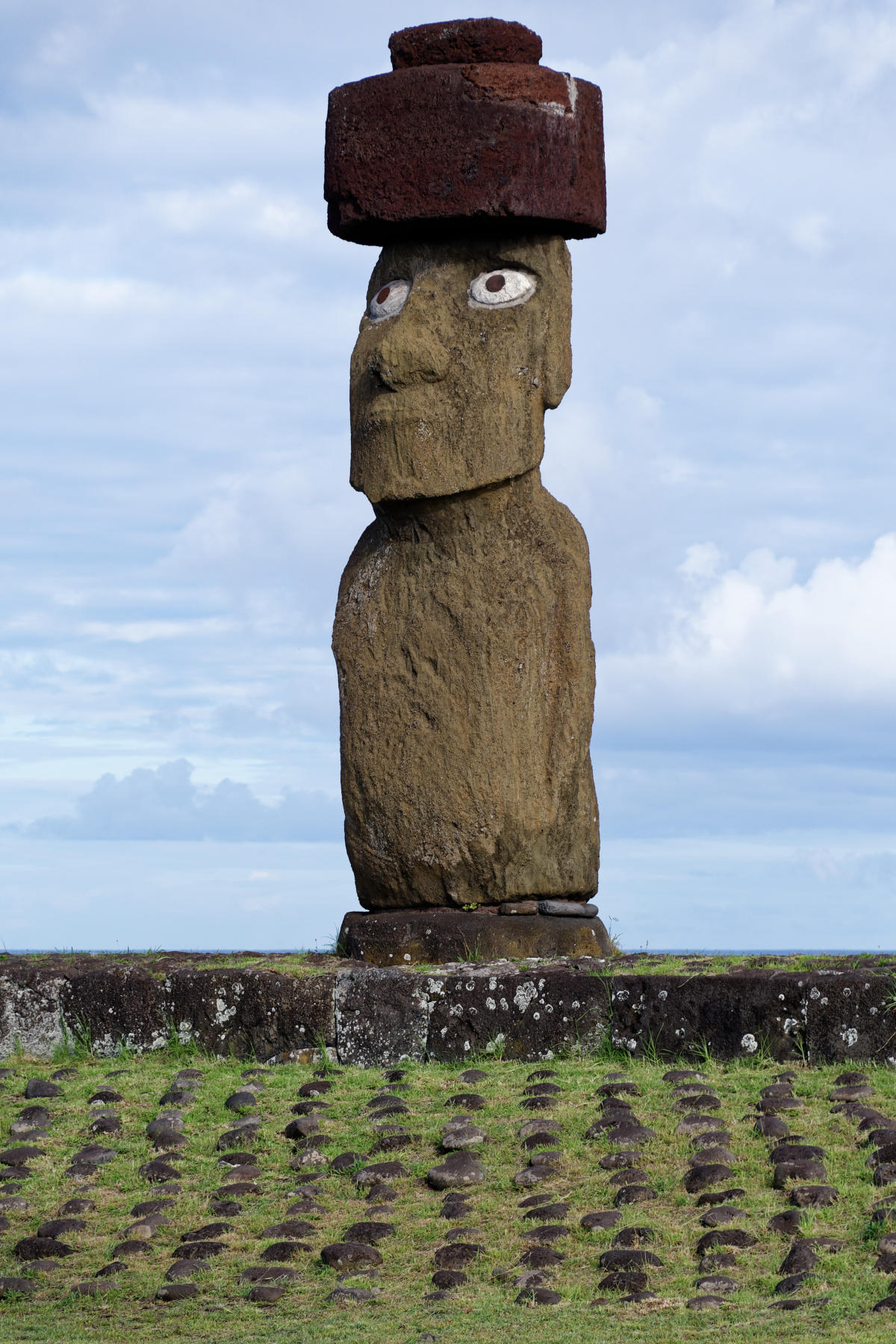 This can be found at Ahu Tahai, and the eyes certainly add character to the appearance, although whether that’s an improvement is a moot point.

Another important platform can be found at Ahu Akivi. 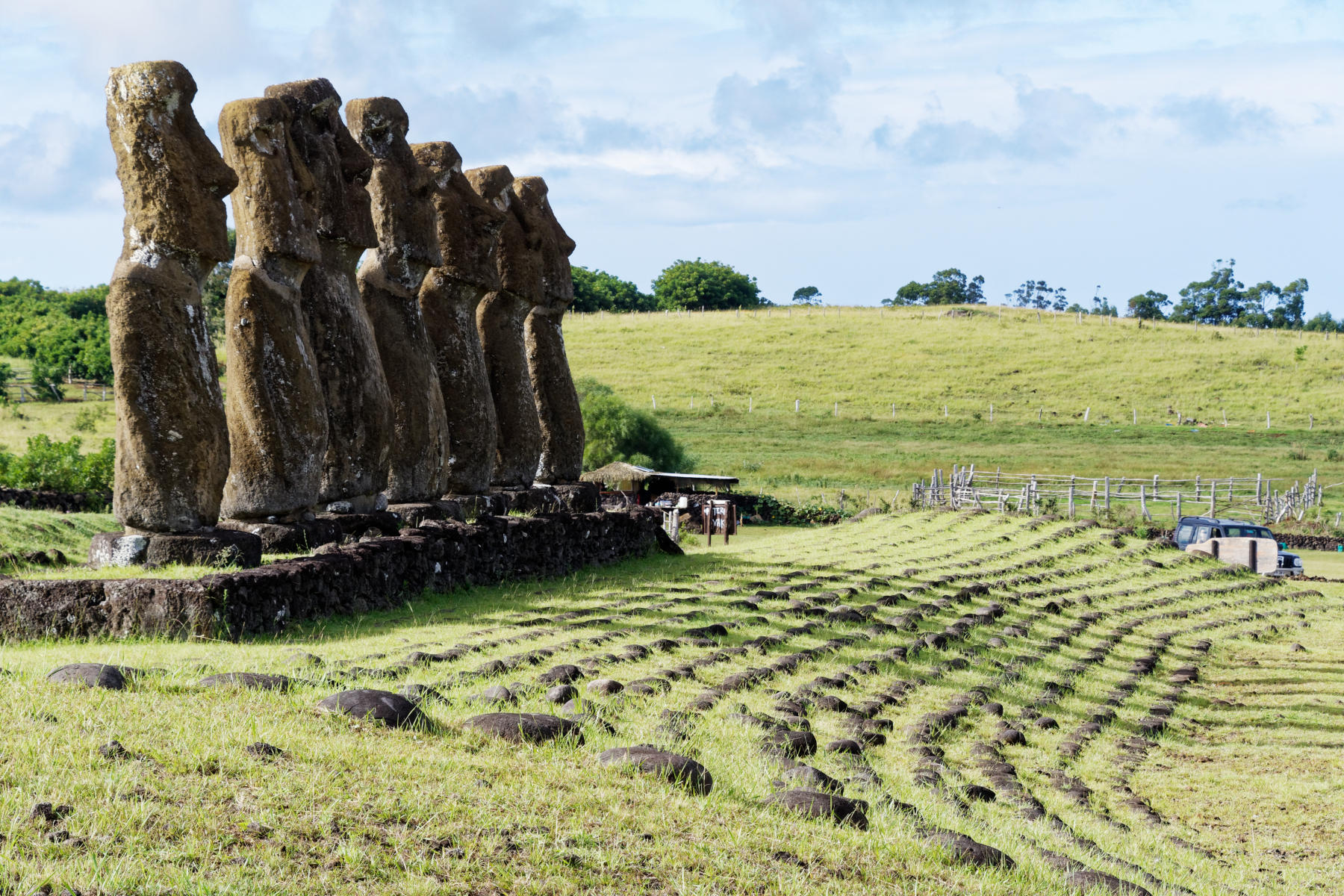 The significance of this platform is that it was the first to be restored, through the energy, insight and enthusiasm of Thor Heyerdahl working with American archaeologist William Mulloy. Sort of Thor Restoration.

Jane’s joke, not mine. She has a thing for Chris Hemsworth. Can’t imagine why.

Heyerdahl is most famously associated with his 1947 Kon Tiki raft experiment in which he sailed 5,000 miles from South America to the Tuamoto Islands to demonstrate the viability of long sea journeys as a way of cultural migration. (Anyone of my approximate vintage will remember that The Shadows had a hit with a record called Kon-Tiki, which just goes to show that pop music can have an educational role.)

Heyerdahl first discovered and photographed the moai in 1955, and he recruited Mulloy to drive the restoration work at Ahu Akivi, which started in 1960, and so has significance as the first platform to be restored.

Mulloy ran several archaeological projects on Easter Island and had great influence in the way it appears today, for which he is justly respected by today’s islanders. He is buried at the Ahu Tahai site.

There are several unusual features of the Ahu Akivi platform:

There is, of course, a legend about Ahu Akivi, concerning the original Rapa Nui King Hotu Matu’s priest having a dream about an island, the king sending out scouts who discovered the island, with seven remaining to await the king’s arrival as he moved his entire people to Rapa Nui. There are several reasons why the experts dismiss this legend, but, hey, it’s a great story.

And that about wraps it up for the moai part of the Easter Island story. But there’s more, and that is to be found at a site called Orongo, in the south west of the island.

The first thing you encounter as you approach the Orongo site is a spectacular view across the Rano Kau volcanic crater, which is a mile wide.

The lake is actually a wetland, bordered in some places by a rainforest. Fruit trees grow inside the crater, and the lake, although essentially stagnant, has had special fish put in it which do not need much oxygen to survive but which eat the mosquito eggs and so keep the island’s mosquito population down.

Turning your back on Rano Kau, you go through the Orongo reception (some interesting photos in it, by the way) and into the site of the Birdman ceremonial village.

The Birdman culture replaced the moai culture on the island, being in existence between the eighteenth and mid-nineteenth centuries. It was based around a race to the furthest of three small islets off the south-western tip of the island. 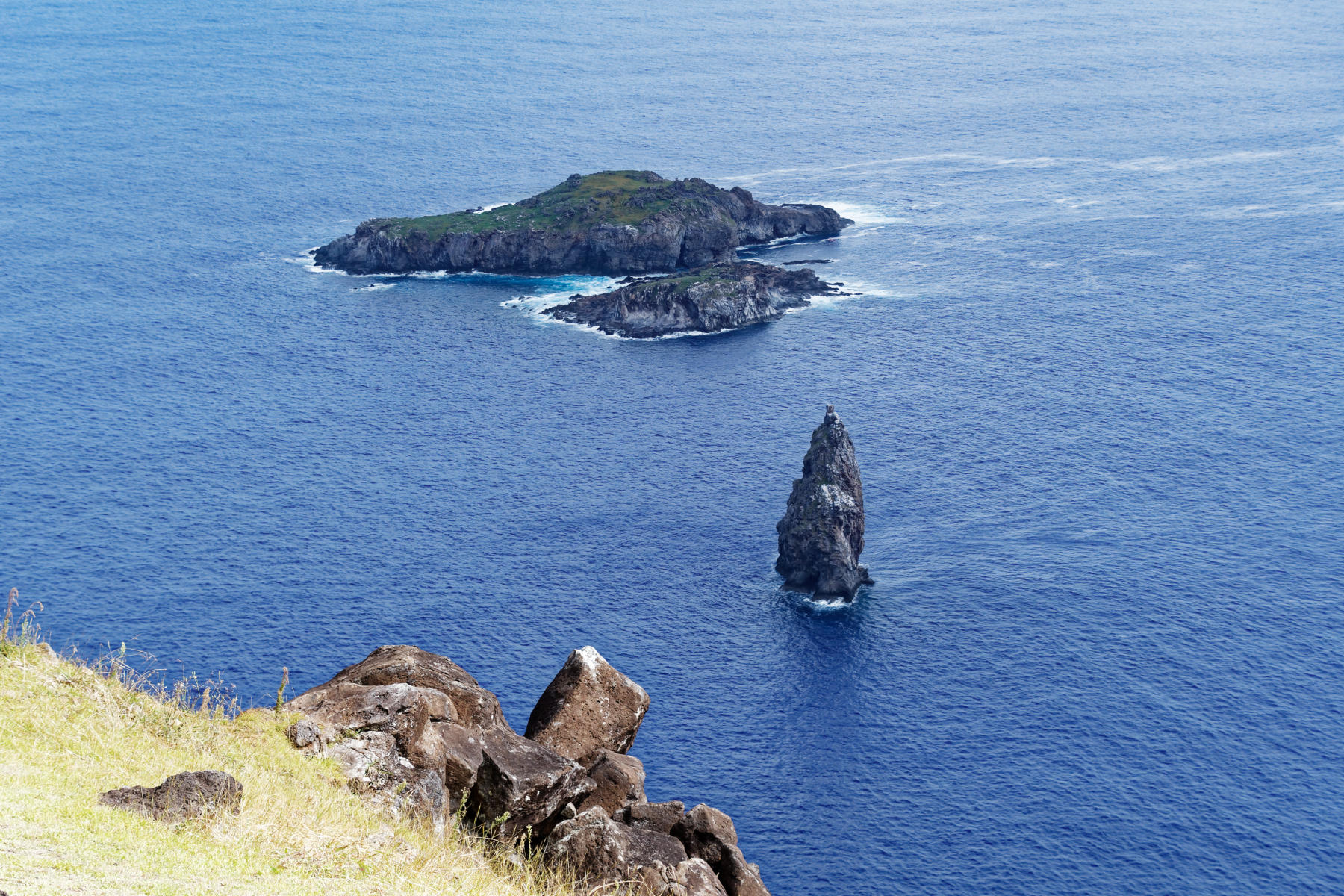 The basic idea is that each of 18 tribes on the island submitted a champion, whose job was to climb down the cliff, swim across to the furthest islet (called Moto Nui), await the arrival of the migrating sooty tern seabirds, procure an egg from a nest and transport it back to the ceremonial village. Intact. The winner was the first to arrive with an intact egg (often transported, we understand, attached by cloth to the competitor’s forehead). His reward was to liaise with three virgins who had been specially kept aside for him; the reward for the chief of his tribe was to become the Birdman for the year, a position of some status.

The village itself consists of several stone houses which were, essentially, used only for the period of the Birdman competition. 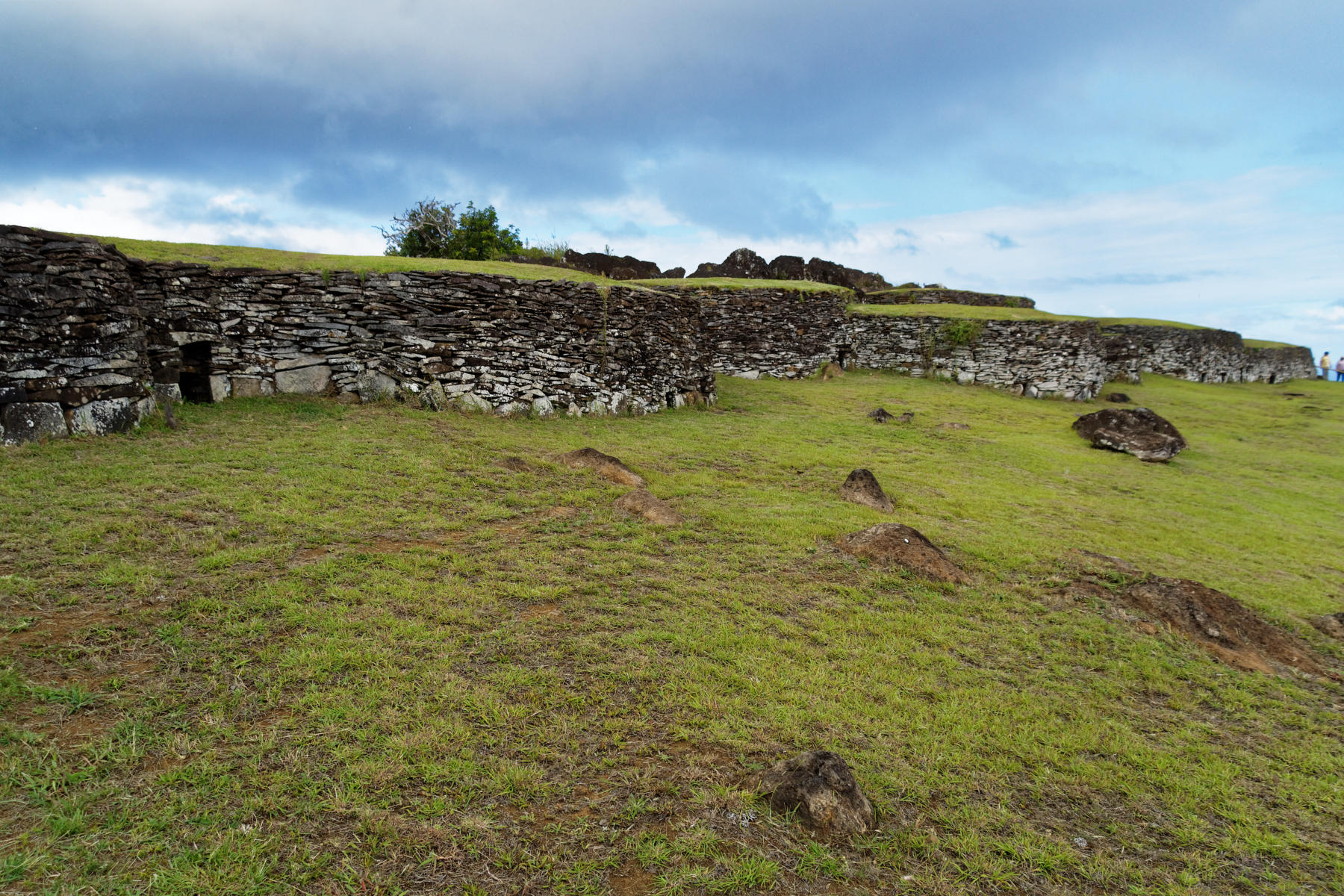 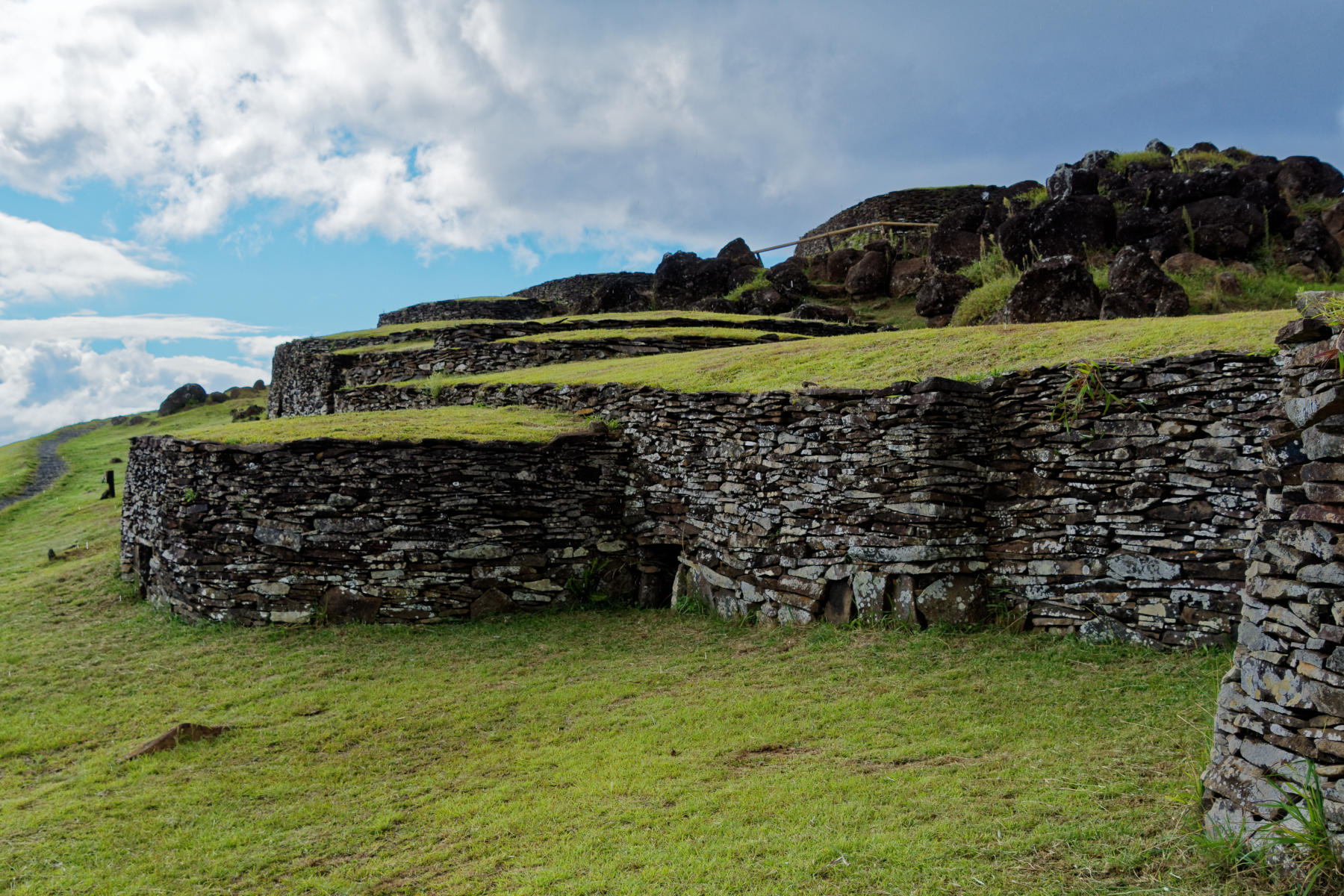 Of these, around a couple of dozen – about half of the total number – have been restored. Embarrassingly, some of the originals were damaged by the British, who hacked them about in order to get at some murals inside them. To compound this, the Brits then stole a unique moai, made of basalt and carved with Birdman petroglyphs and this (“the stolen friend”) stands in the British Museum. Just down the corridor, one assumes, from the Elgin marbles.

So, why did the moai culture die out? And why was it replaced by the Birdman cult? (“no-one knows”, but perhaps the deforestation of the palms left the islanders unable to leave, and the migration of the sooty tern gave them the illusion of being able to come and go at will?) Whatever, it’s another of Easter Island’s unusual sites and sights, and part of a wonderful, compelling and mysterious story which it was a pleasure to spend two days discovering.