Thursday 26 May 2022 – I’m playing for the sympathy vote, here.  During the night, my vigorous crop of mouth ulcers ripened into a mouth full of agony which grew worse every time my tongue touched anything. Have you ever tried eating, or drinking, or even talking without your tongue touching anything?  Take it from me: it’s not possible.  Breakfast was simply not an option; even a cup of Twinings finest Earl Grey was a significant challenge. That’s how bad it was.

However, I wasn’t going to let it entirely bring my day to a halt. Jane wanted to visit Bethany, the site of Christ’s baptism by John the Baptist, and, although organised religion and I are barely on nodding terms, it’s clear that it’s a site which has deep symbolism for a vast number of Christians over the globe.  It would have been churlish not to take the opportunity to visit.  So we did, having arranged with Saeed that he could do the driving for us.

The site is quite close to the Hotels Area, and the short drive there enabled us to increase our ever-expanding insight into the pharmacies of Jordan by making a stop off to buy something to address the pain of my ulcers.  We ended up with a gel called Afta Med which promises that it “immediately reduces pain” and seemed somehow just the ticket. I think it helped somewhat.

If you do a simple online search for “Bethany” you might expect that something of the pith and moment of the baptismal site for Jesus Christ, one of the most significant figures in the development of the world as we know it today, might figure high on the list of results.  You’d be wrong.  Among the inordinate number of churches, towns and charitable organisations using the name, there’s Bethany, where Lazarus was raised from the dead (a transition I was hoping might be reversed for me today), but that’s near Jerusalem on the West Bank. It’s described by one website as “a miserably untidy and tumble-down village facing East on the Southeast slope of the Mount of Olives, upon the carriage road to Jericho.” I couldn’t actually find any reference to where we were headed without using more focussed search words, but eventually you discover that it’s a Unesco World Heritage site and has its own website.  Clearly, having major religious significance doesn’t in and of itself convey any SEO skills. So, “Bethany Beyond the Jordan” it is, or “Al-Maghtas” in local currency.

The site is reasonably well-organised from a tourist’s perspective, with a car park by the ticket office and a shuttle bus (air-conditioned, woo hoo!) that takes customers and a guide on a short drive to the site itself. It was a hot, hot day as these dogs could vouchsafe. 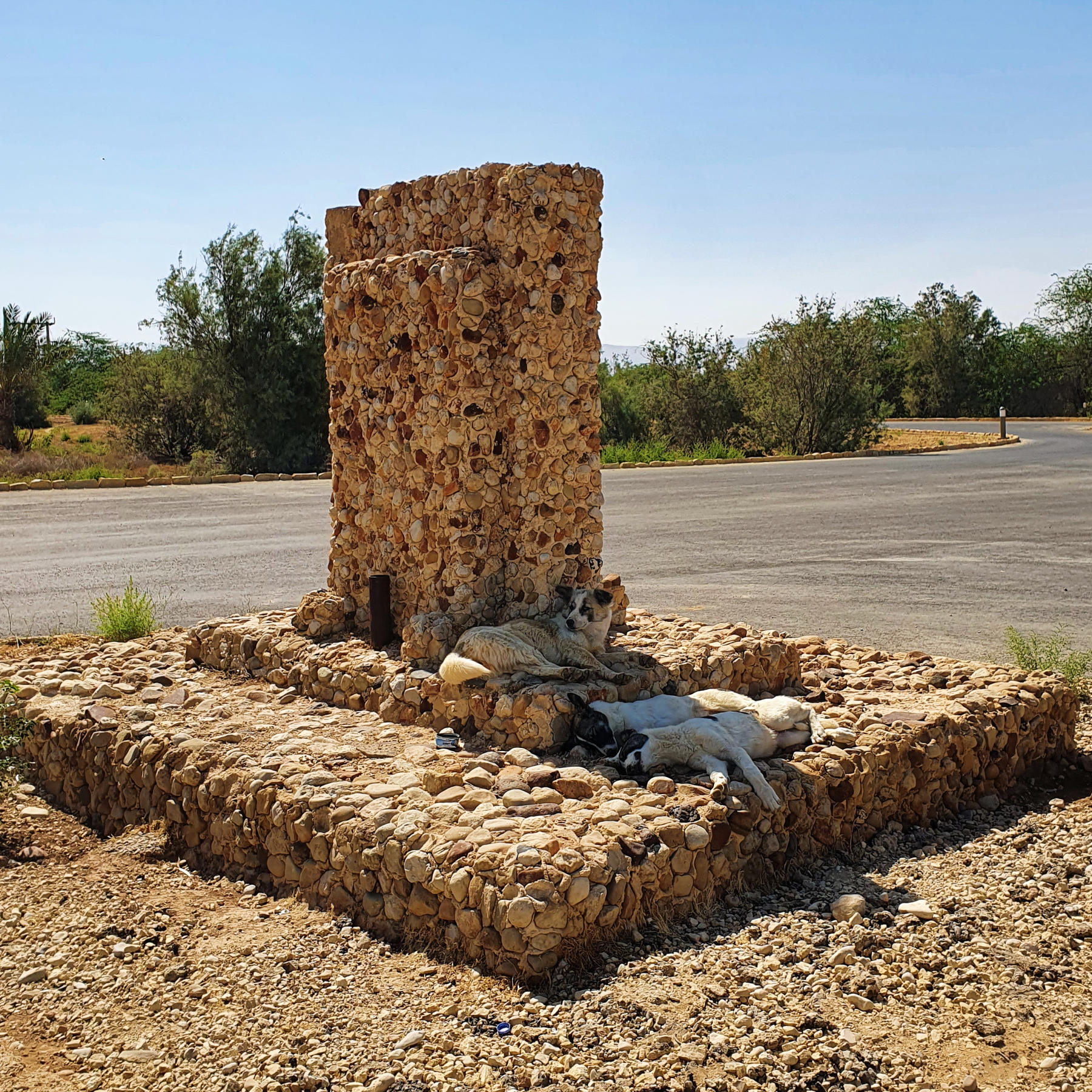 Our guide was called Noor 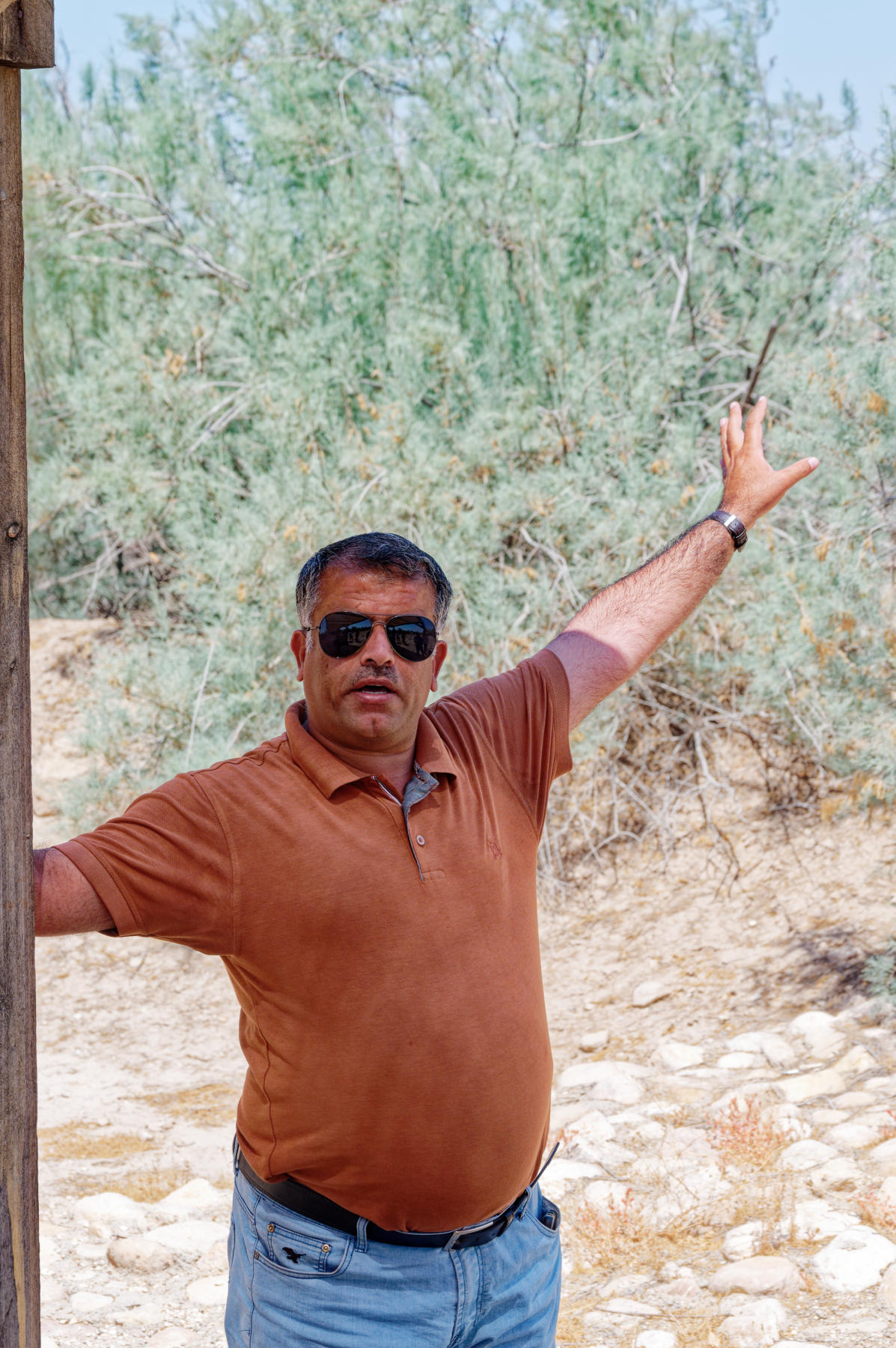 who said that he was part of the team which discovered the site in the ’90s and did a good job of herding us cats from place to place along rather thoughtfully shaded walkways, whilst explaining what we could see.  So, what could we see? 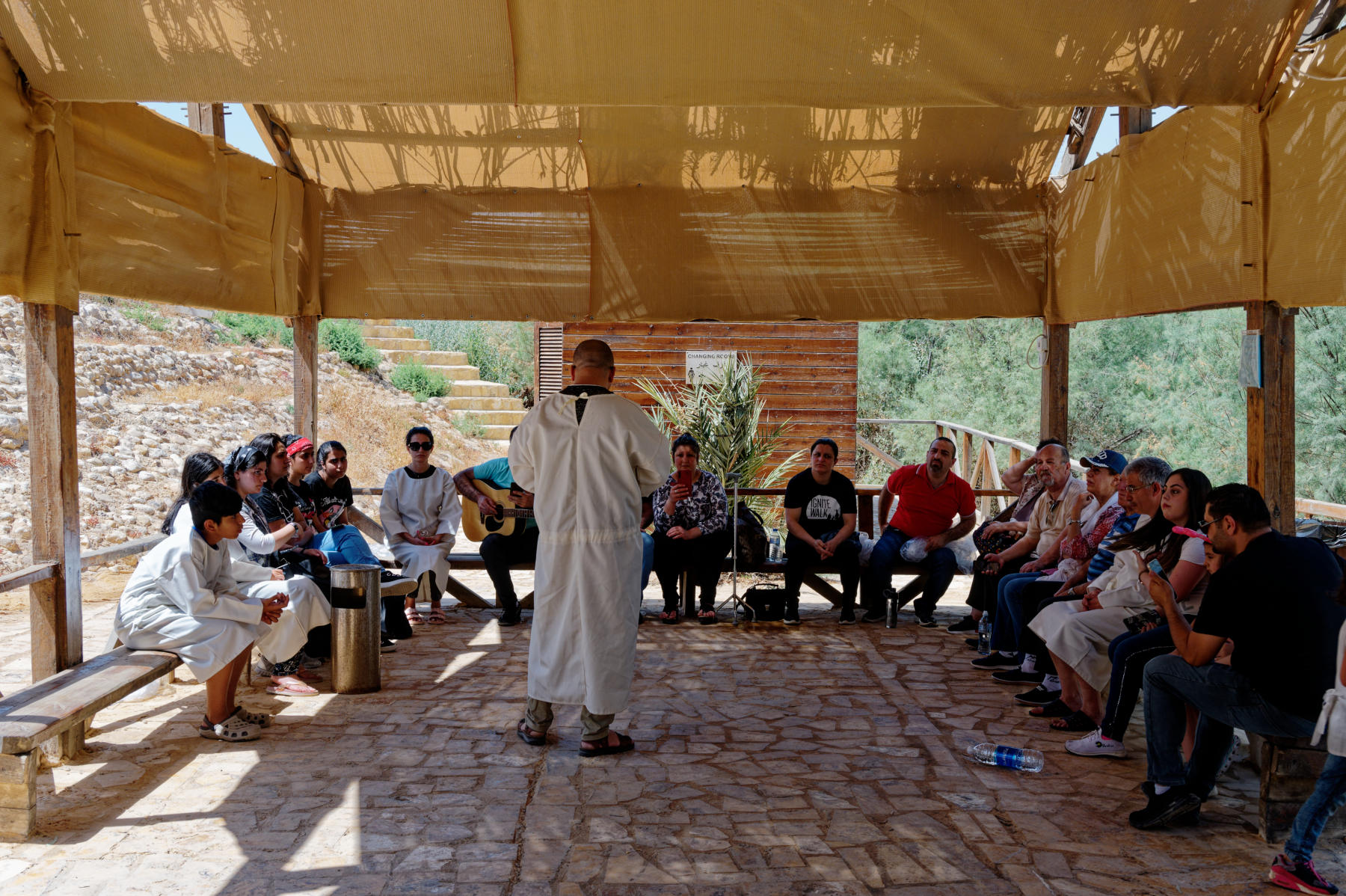 and we were able to go into the new (Greek Orthodox) church of St. John the Baptist, which is highly painted and very colourful. 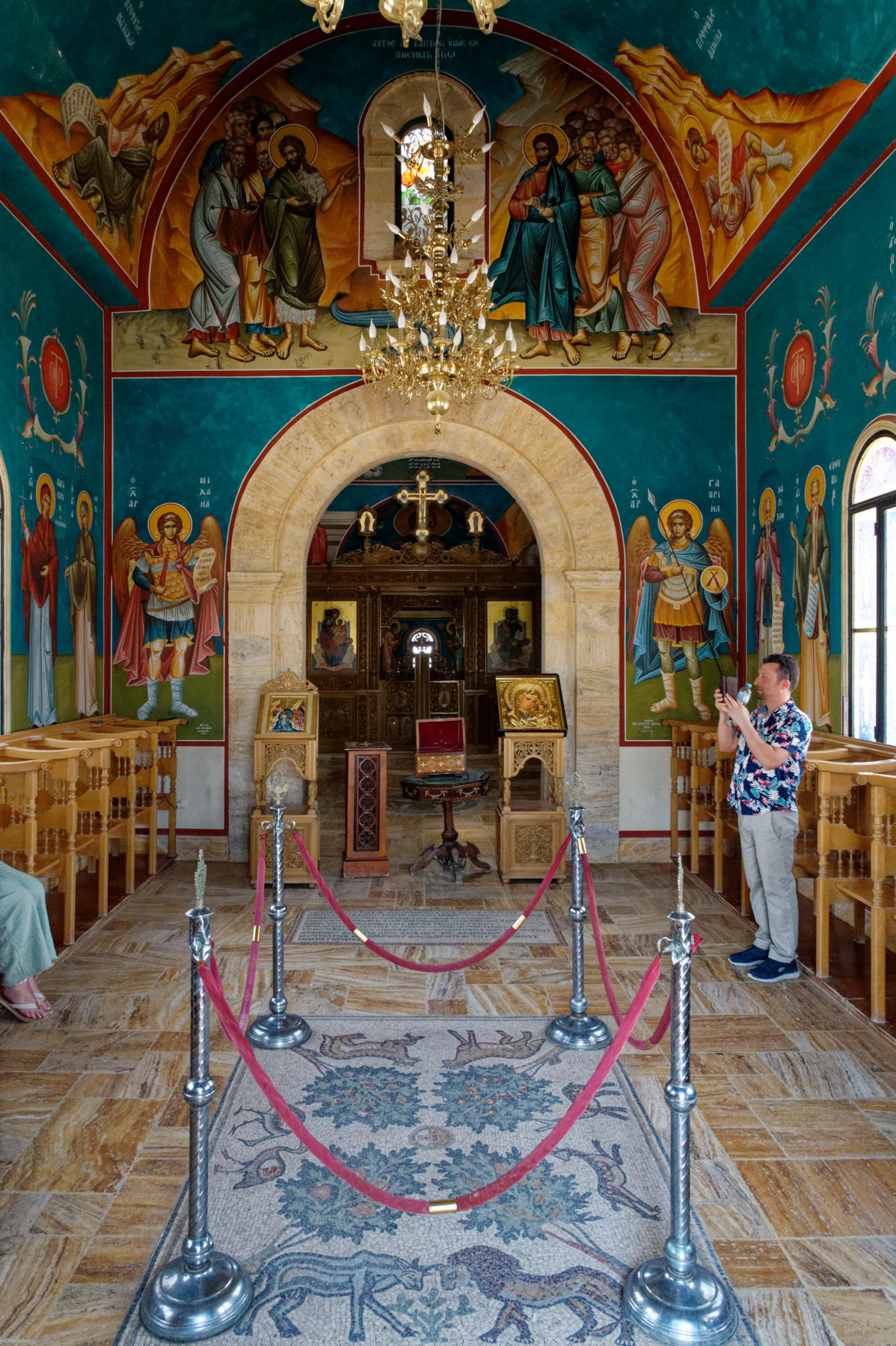 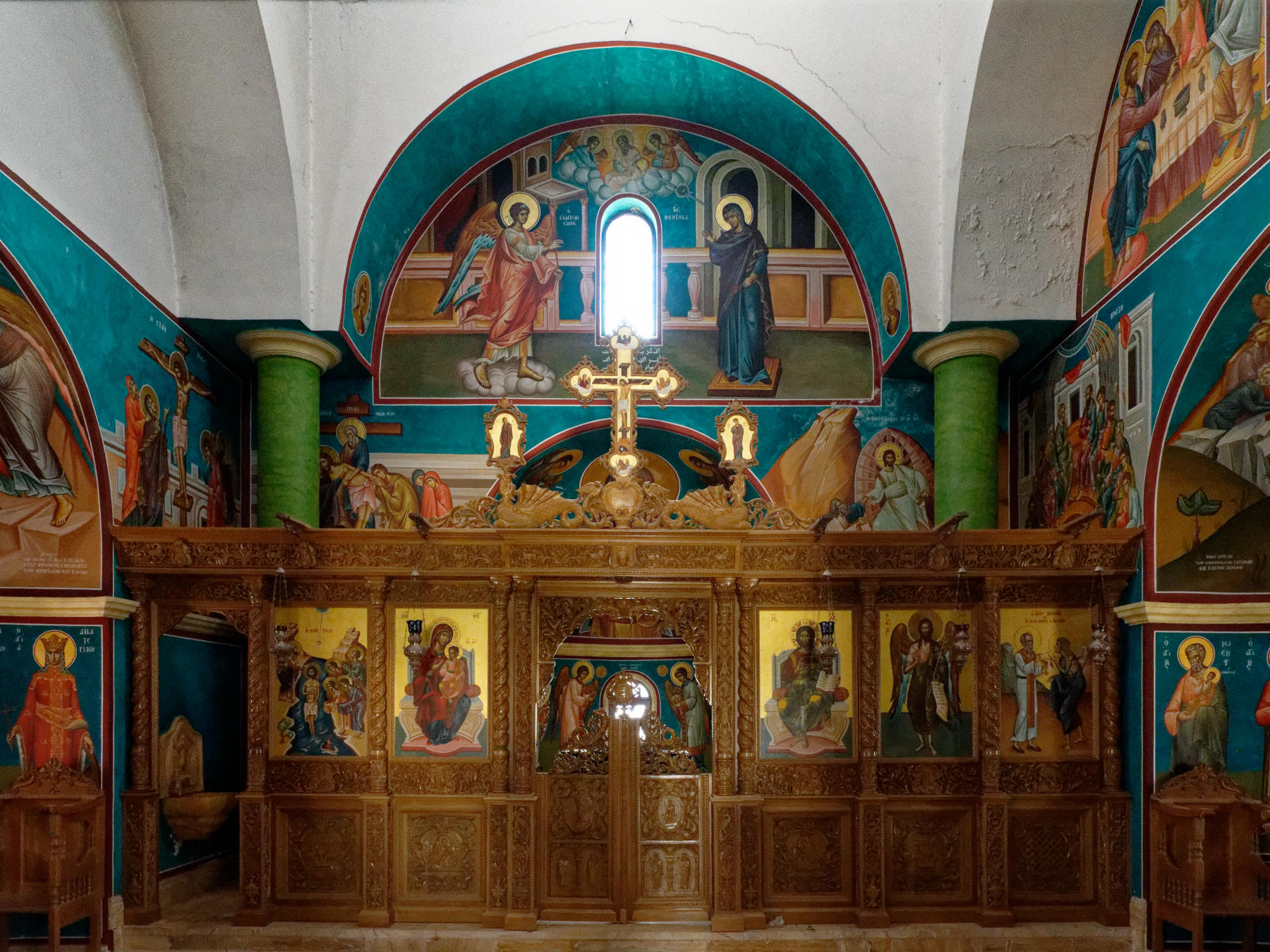 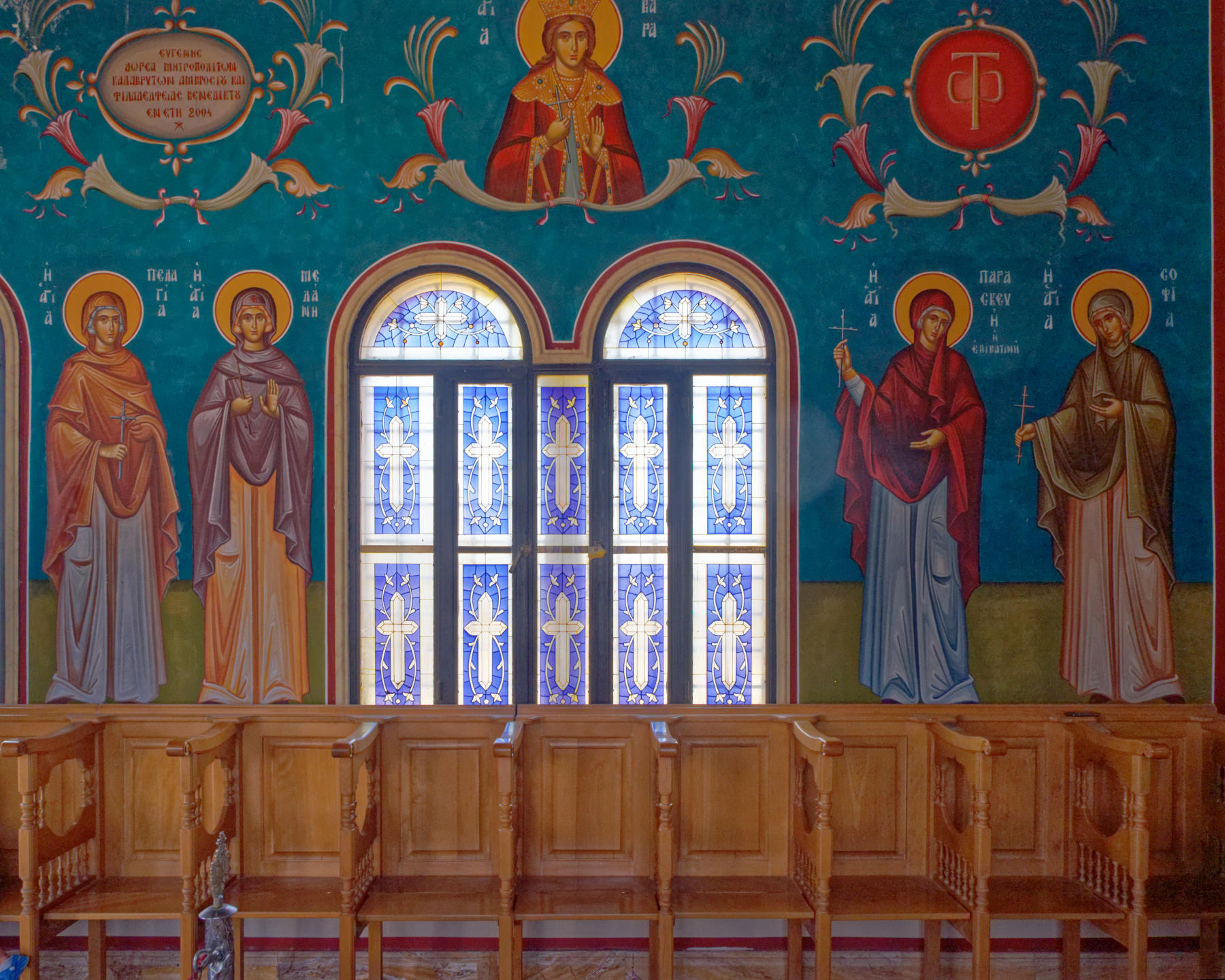 On the floor is a mosaic of The Tree Of Life 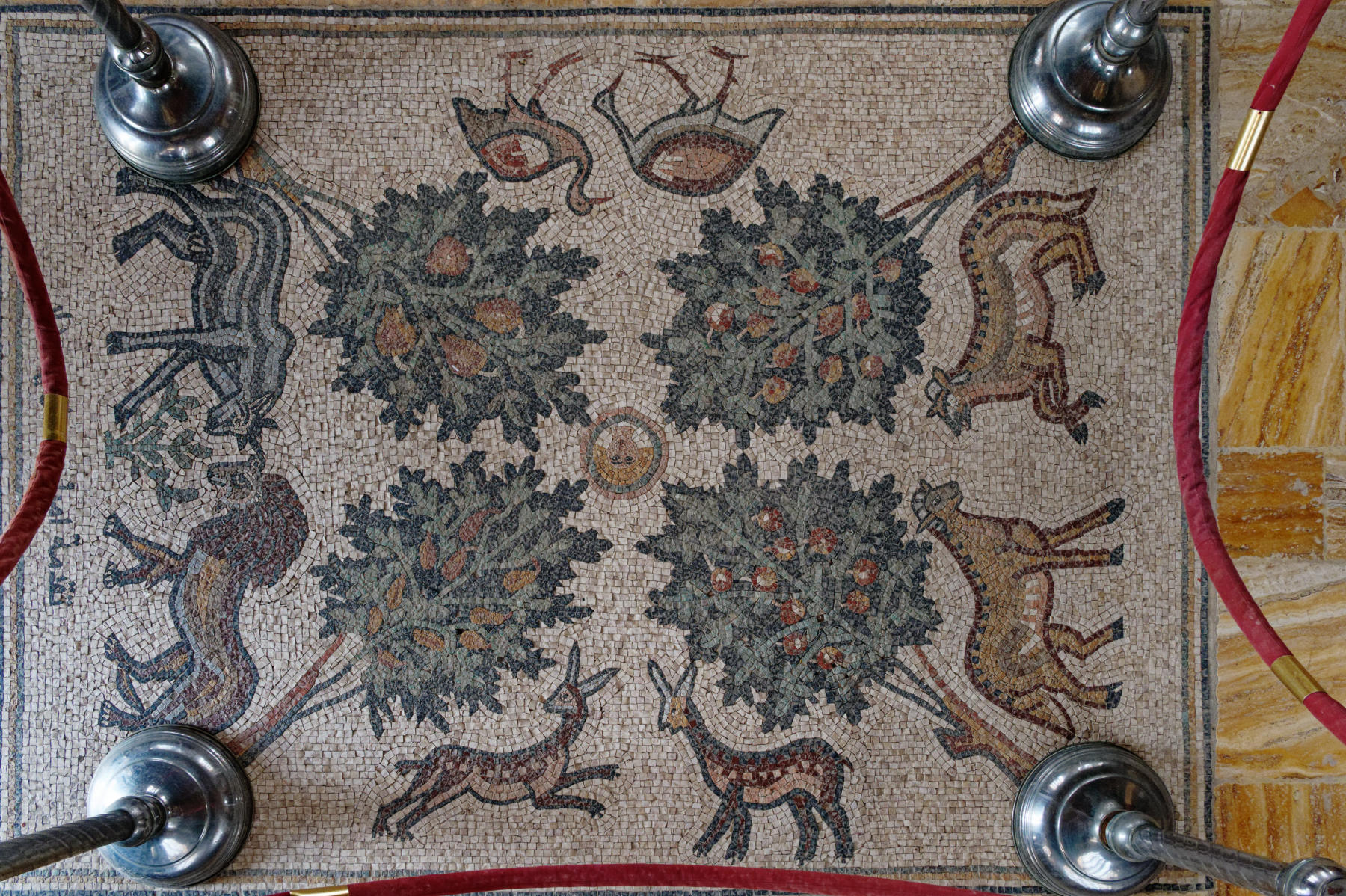 directly under the painted ceiling. 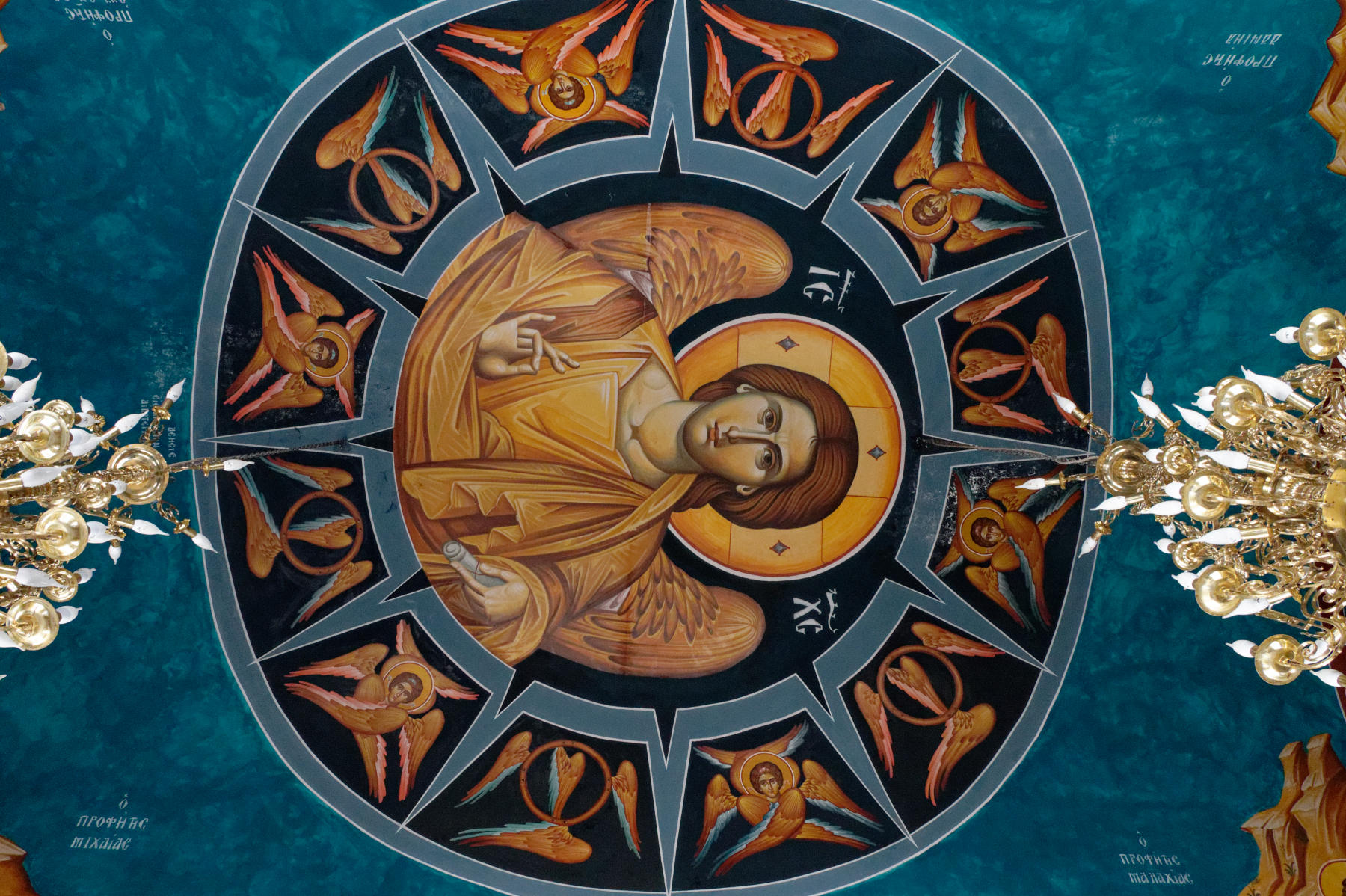 On the site, there is also a museum (and, of course, retail opportunity) 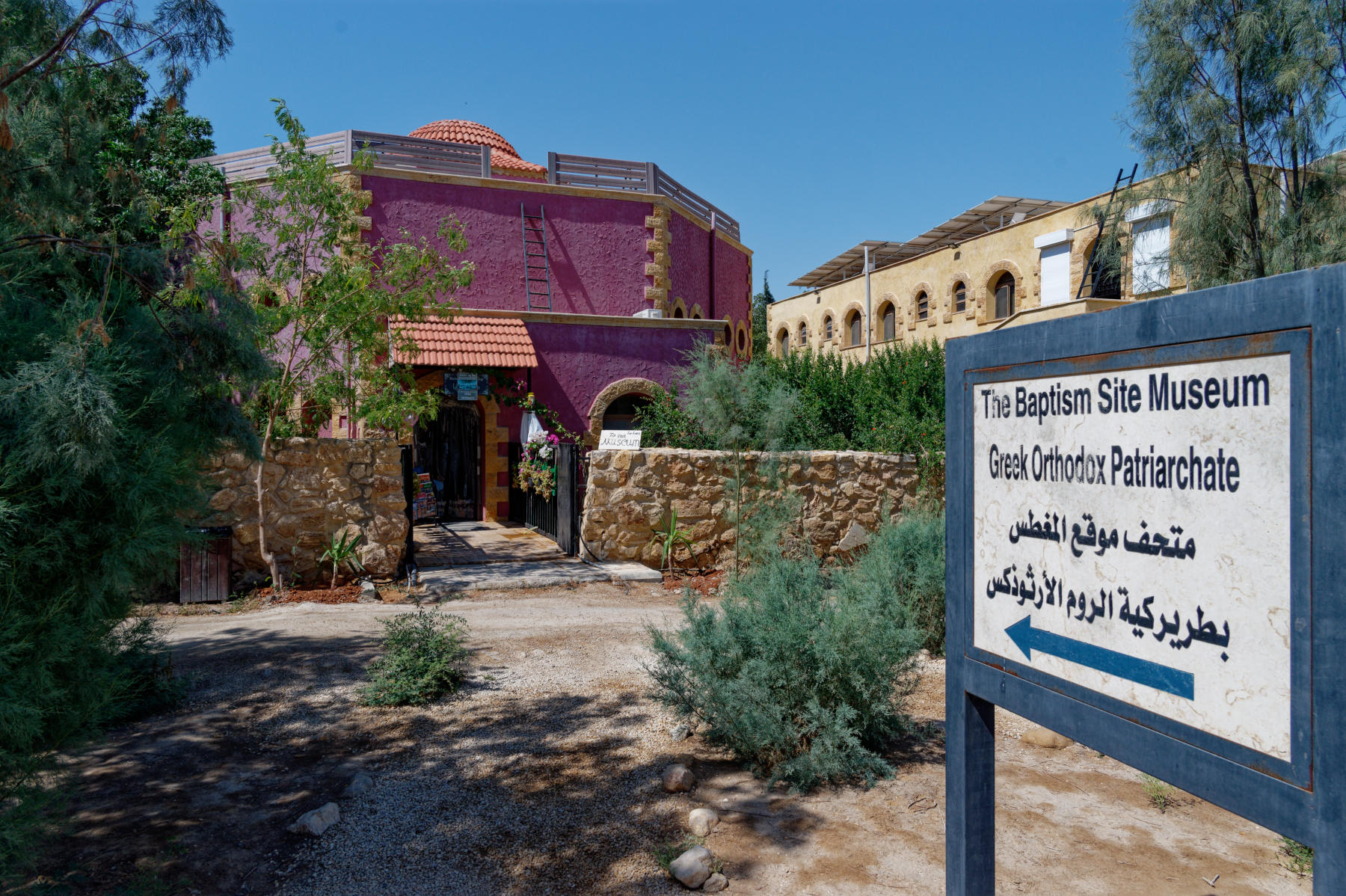 which features, among the exhibits, some original mosaic work 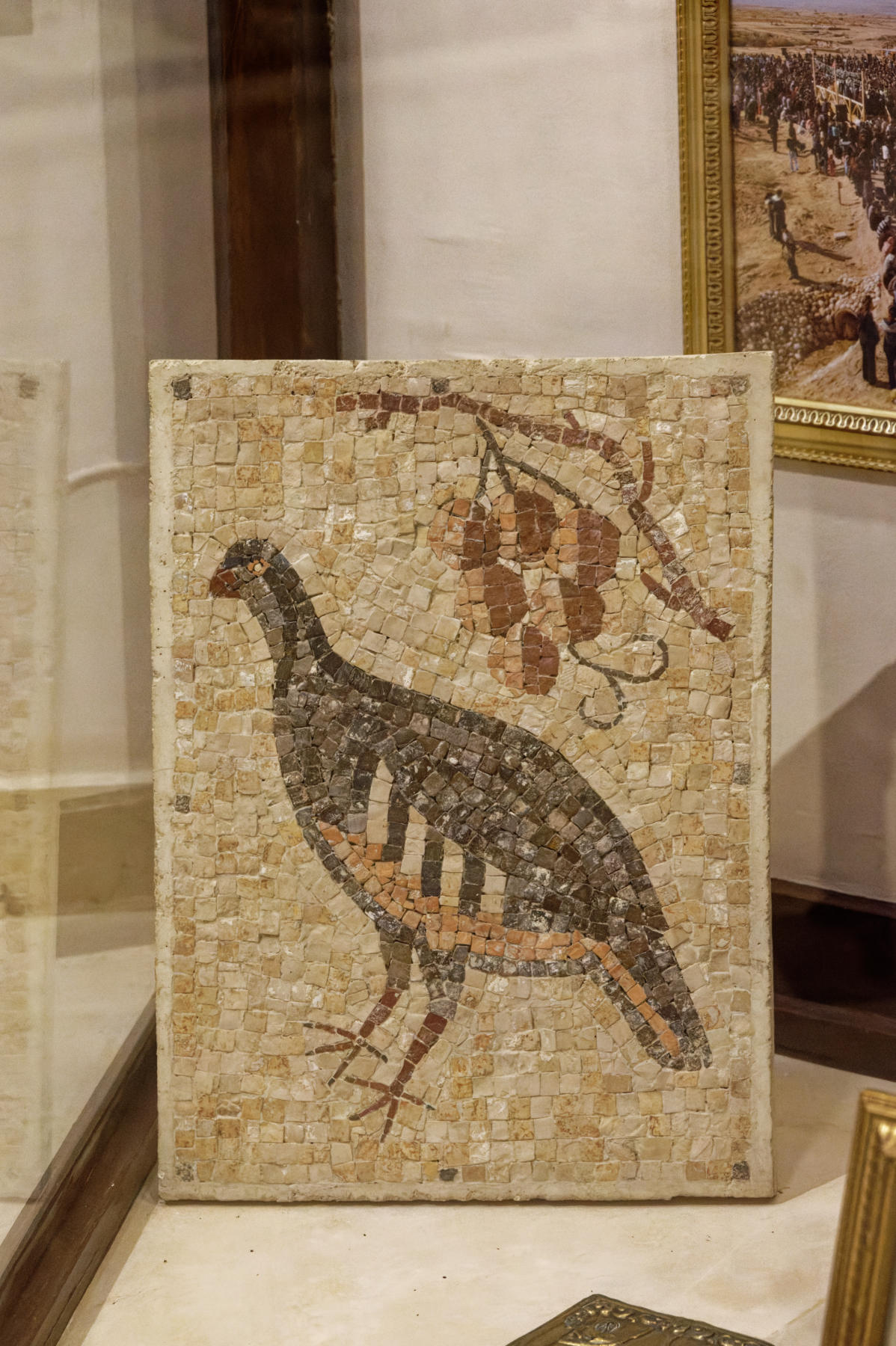 and some amazing embroidery 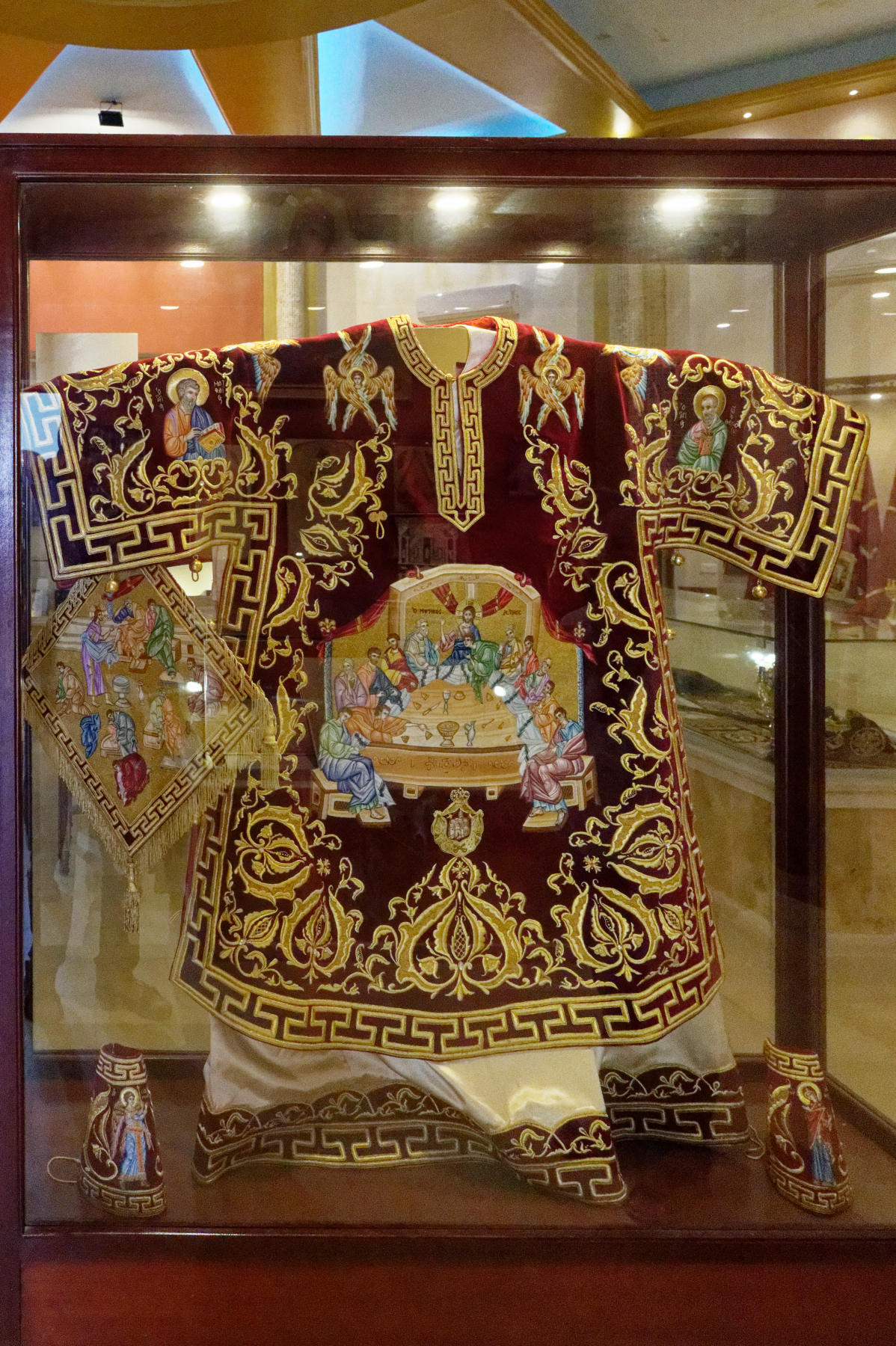 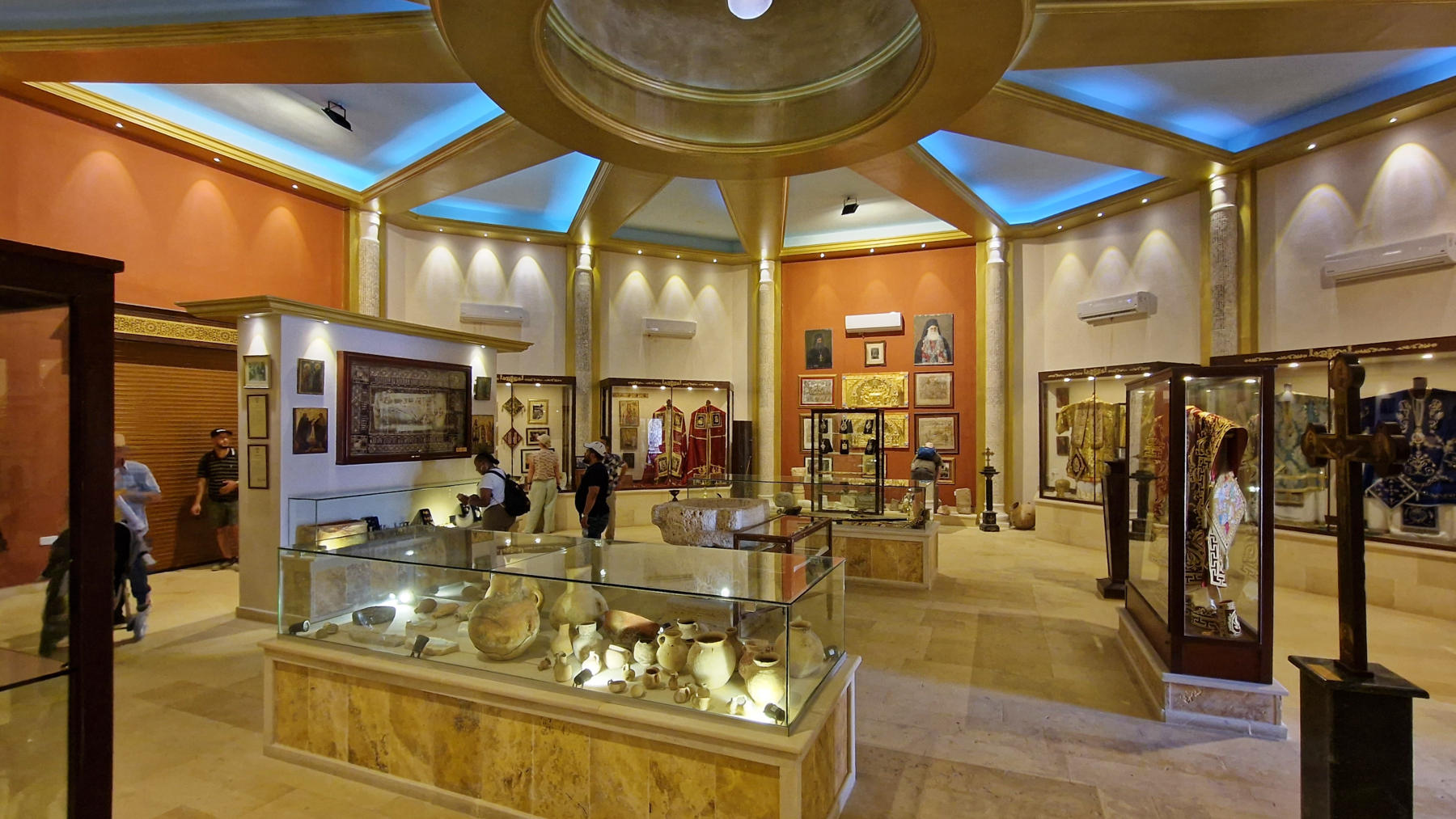 which suited me well, as it probably did a fur-coated local. 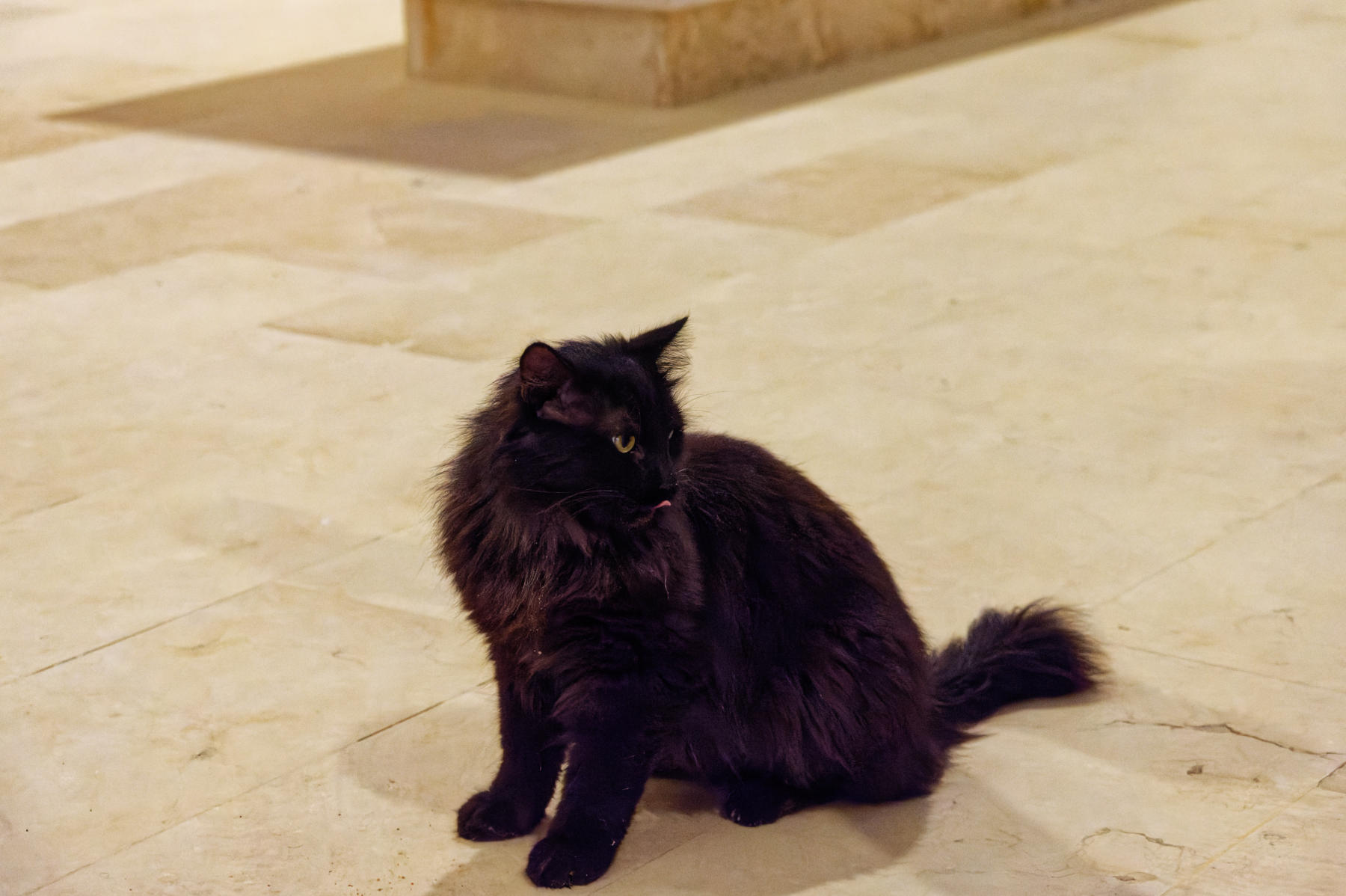 How credible are the claims that this is really the site of Christ’s baptism?  Well, in addition to much archaeological and anecdotal evidence of the religious importance of the site over several centuries, the leaflet that comes with the tickets says, “The authenticity of this site is as pure as the testimonies from the gospels, the pilgrims and travellers that have visited this cherished site.” Whatever, it felt like a worthwhile visit and we were grateful to Noor for giving us the extra context of where things fitted into the biblical story.

After this visit, Saeed took us to the Panorama Complex and Dead Sea Museum that we had been unable to visit yesterday, which is a little south of the Hotels Area, and reached along a steep, twisty road. 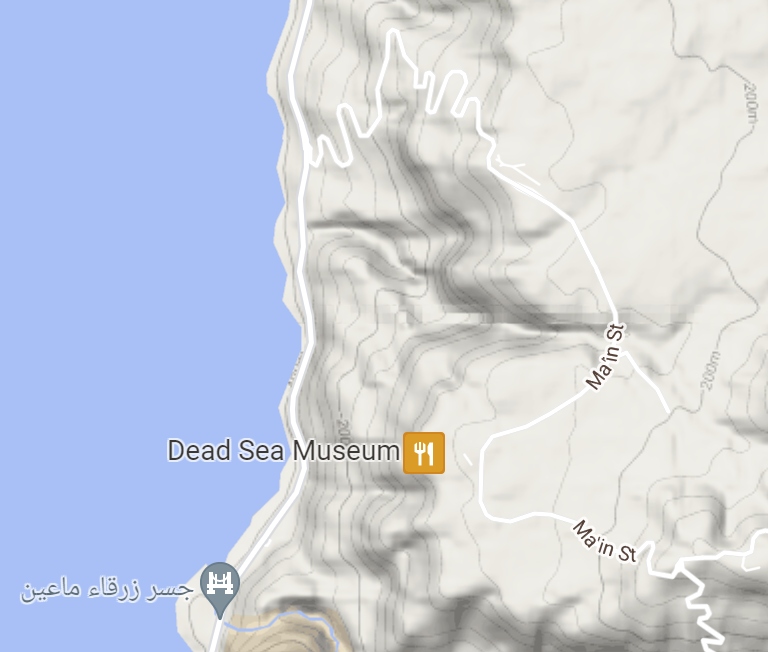 Saeed stopped occasionally as we ascended and encouraged us to admire the view, but, frankly, it wasn’t that interesting. 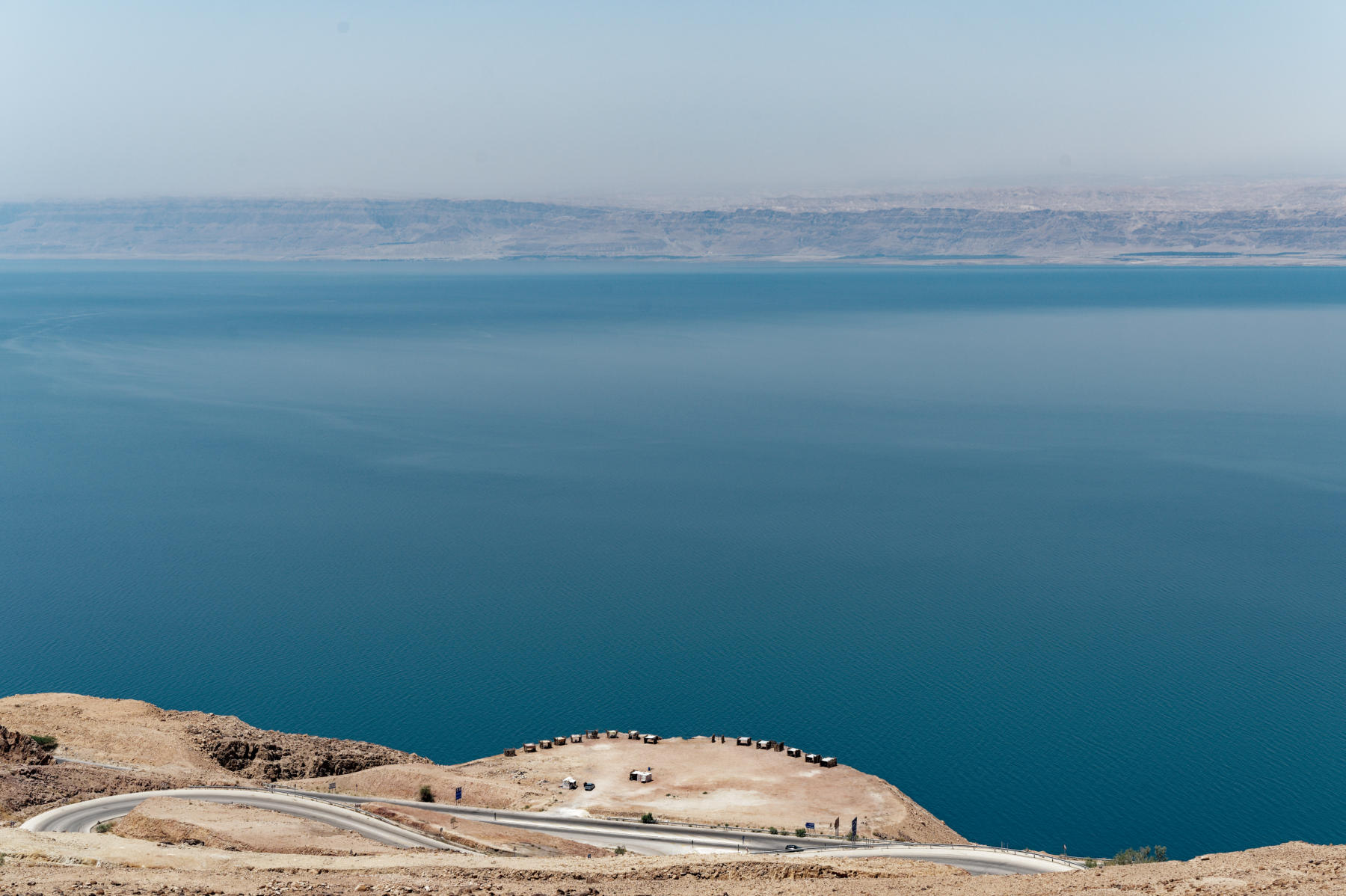 We reached the museum complex and again stopped to look at the view.  It had hardly changed, but at there was something there to tell us what we could see and the compass direction of other places of interest in Jordan (all boxes we had ticked by this stage, fnah fnah). 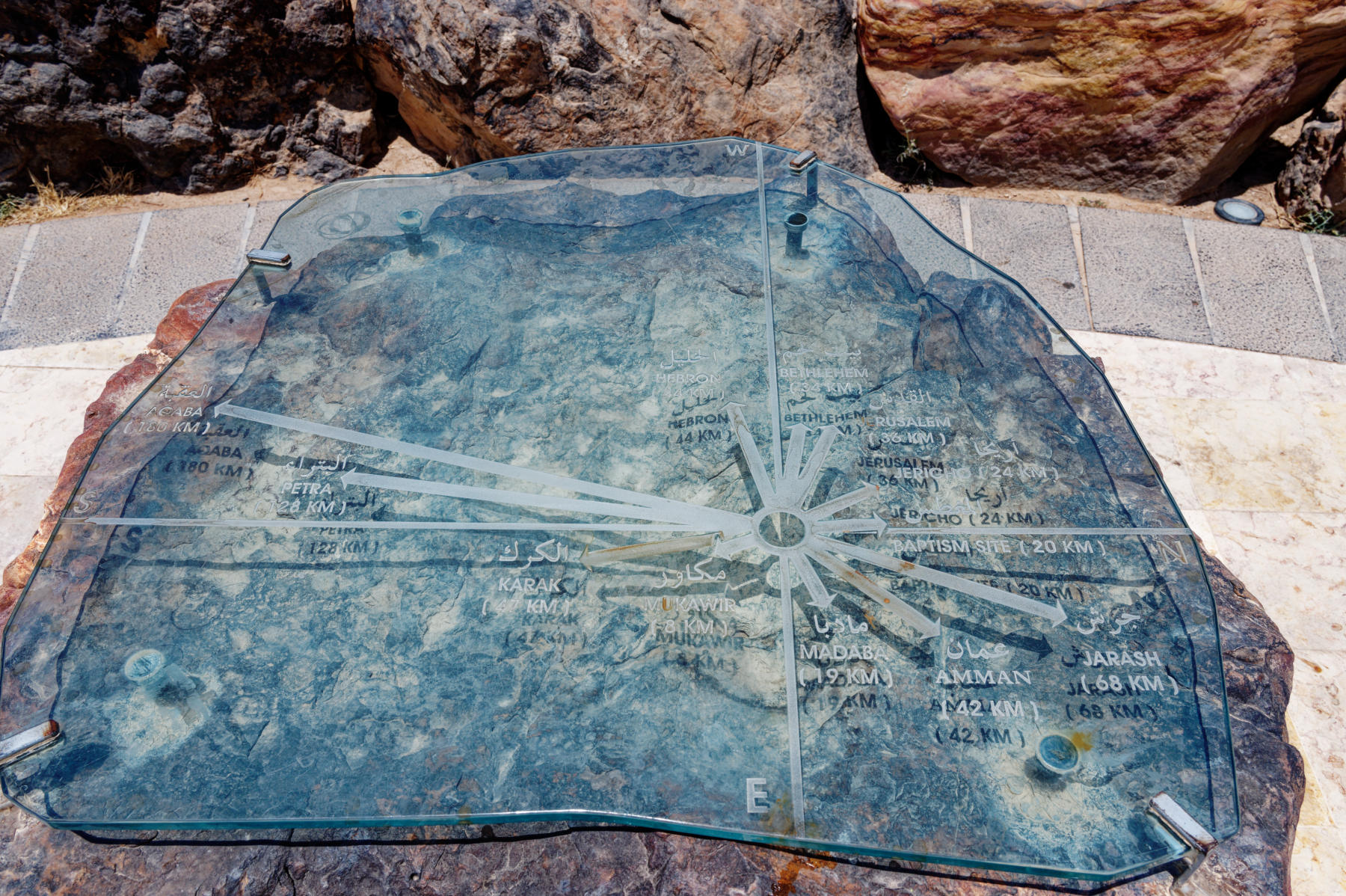 We could see the works associated with the Ma’in geothermal springs (whose water nowadays gets pumped to Amman, rather than being allowed into the Dead Sea) 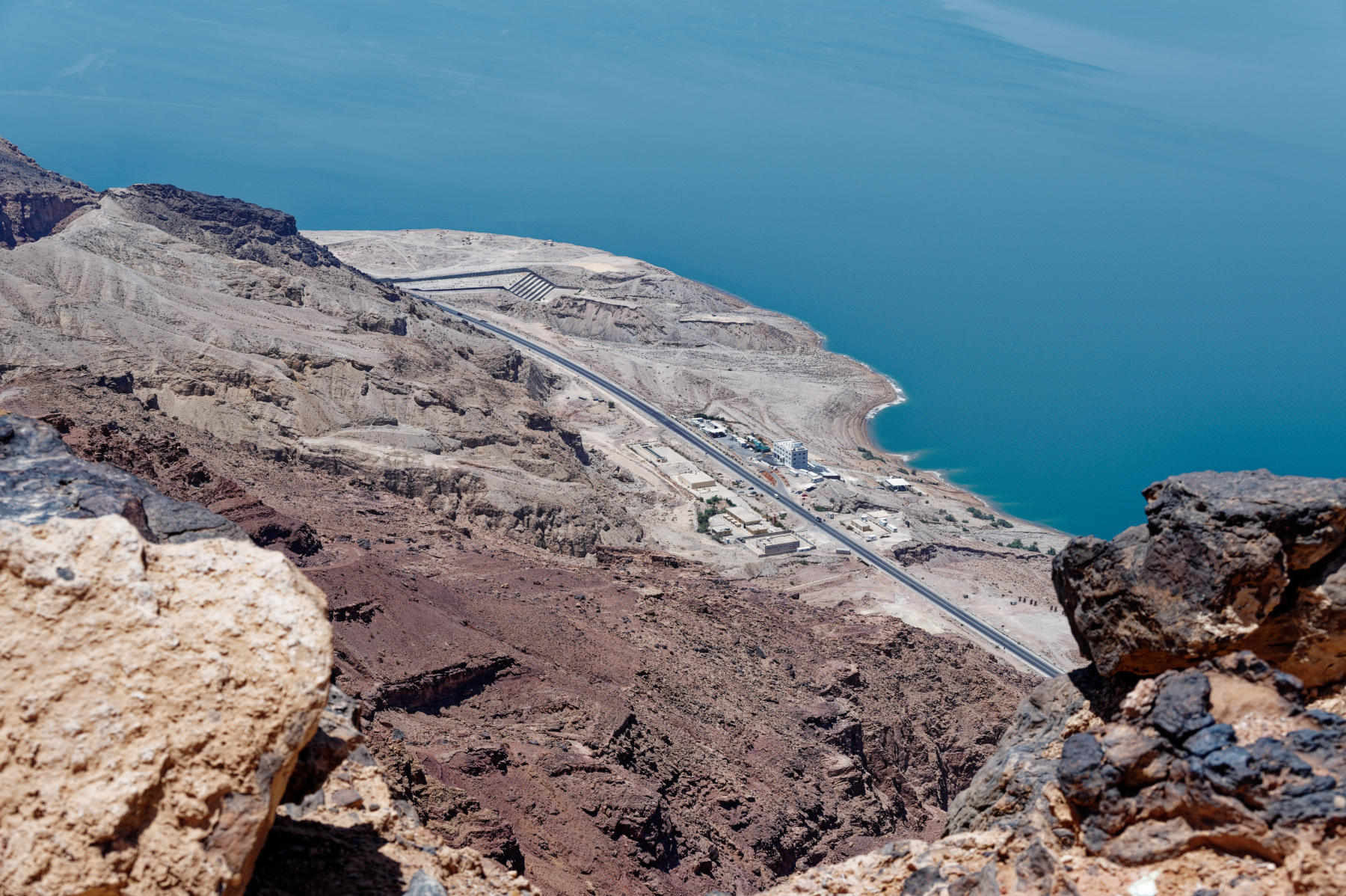 and amusingly the road that the complex is on is called Ma’in Street. I hope this naming was done with an appropriate amount of twinkle in an official eye somewhere.

The complex is a handsome building 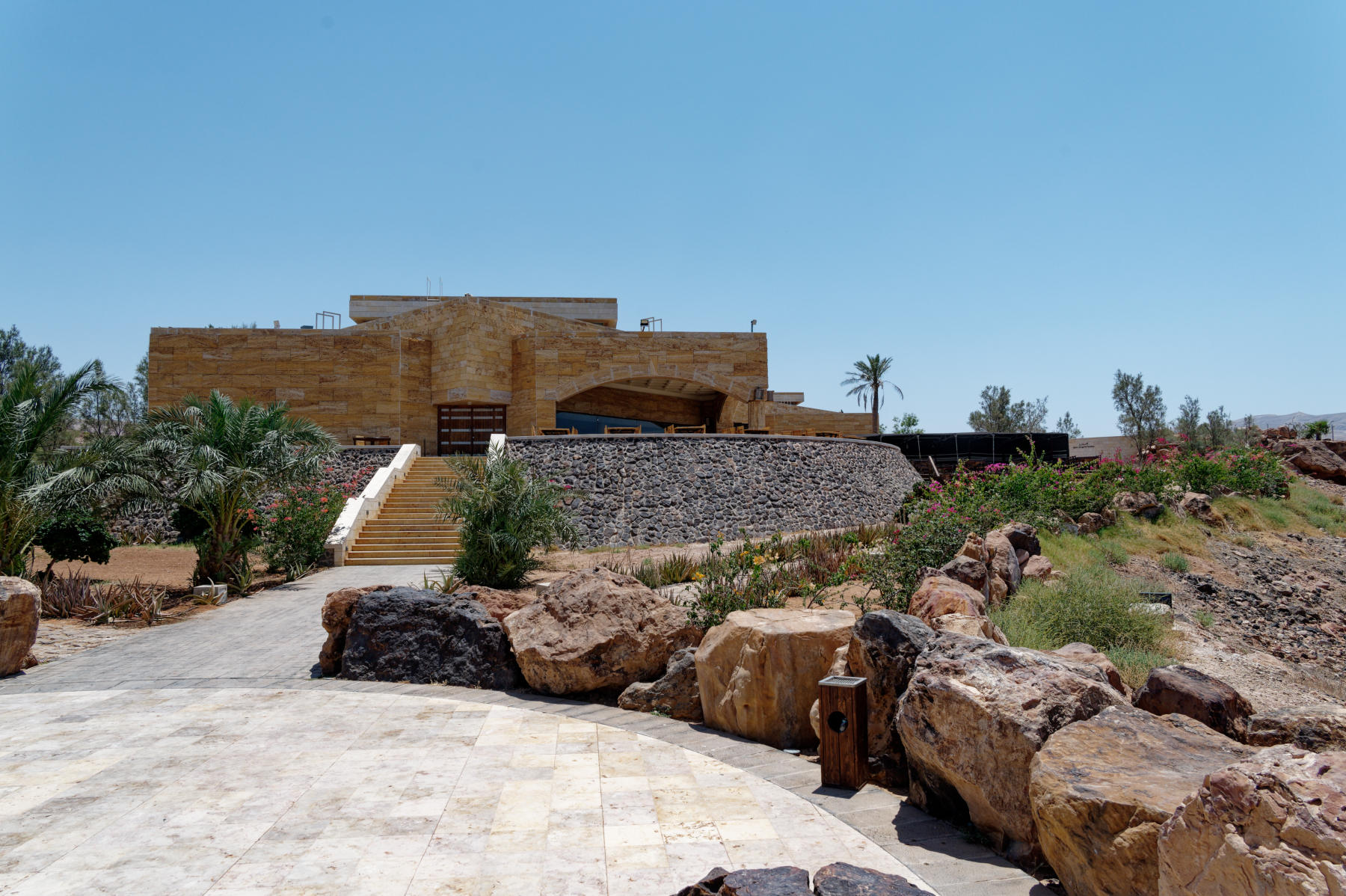 and is well set up as a home for the museum as well as a restaurant. 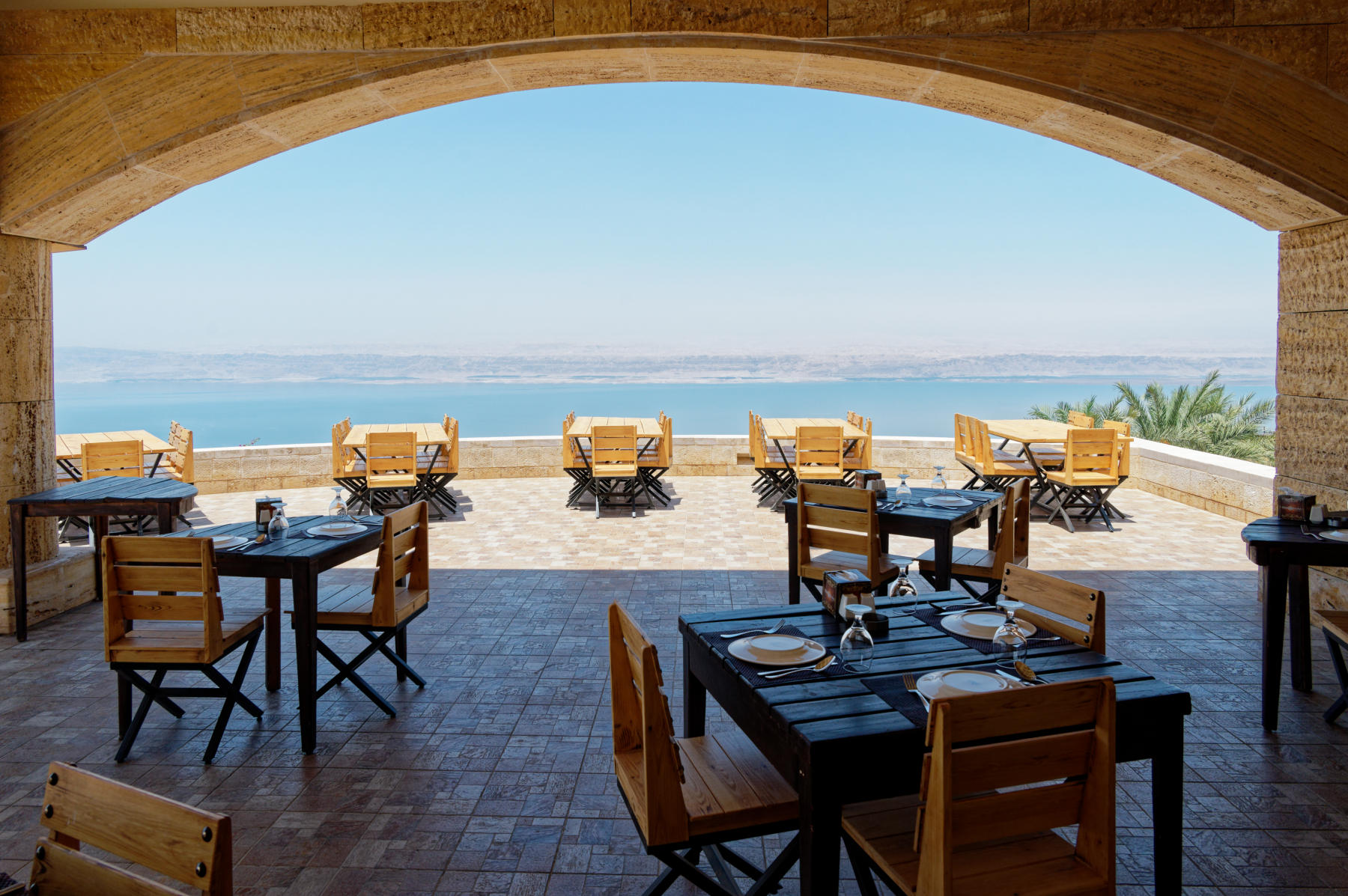 The architecture is nicely done and offers the chance of some, well, architectural photography. 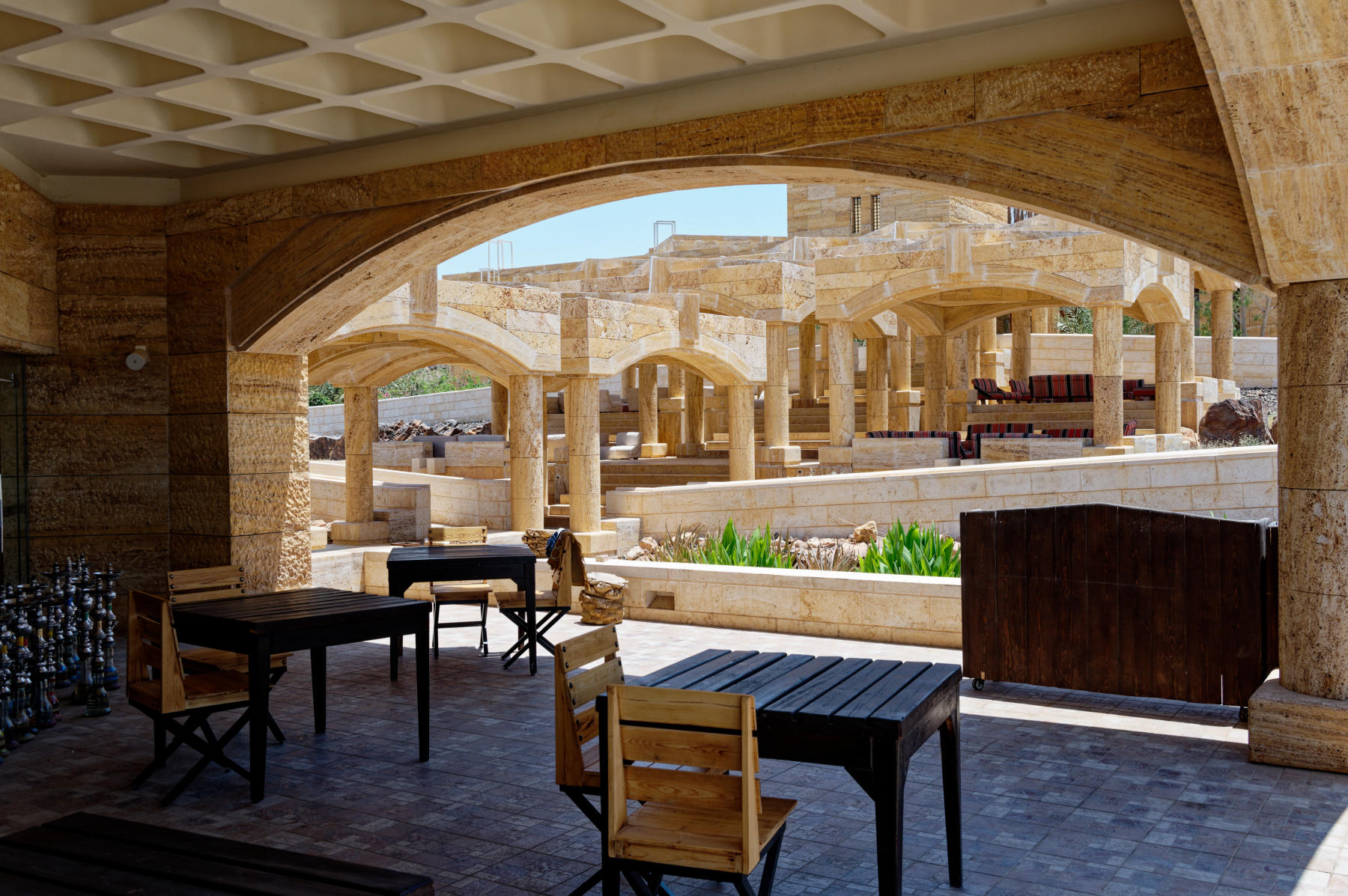 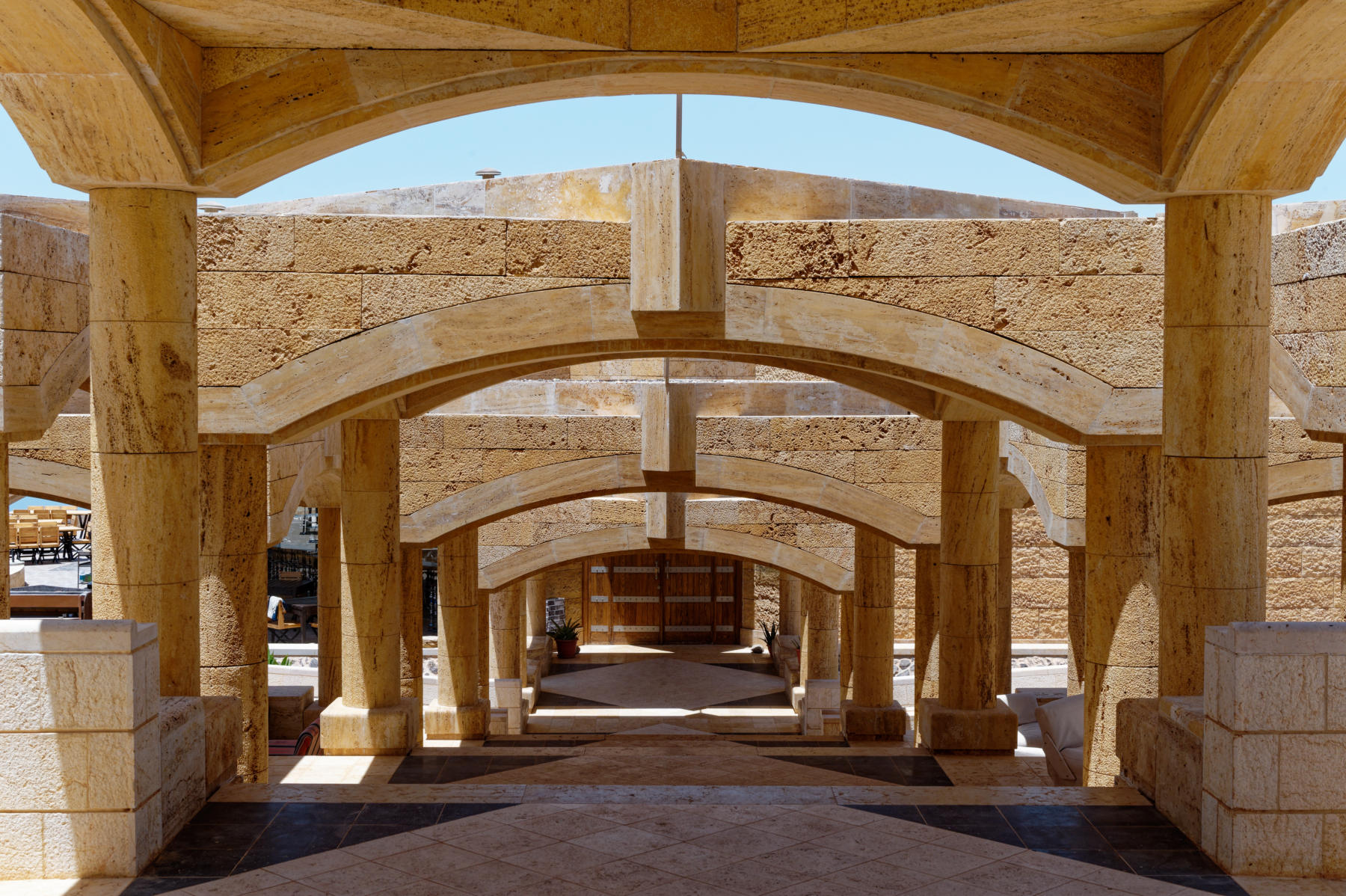 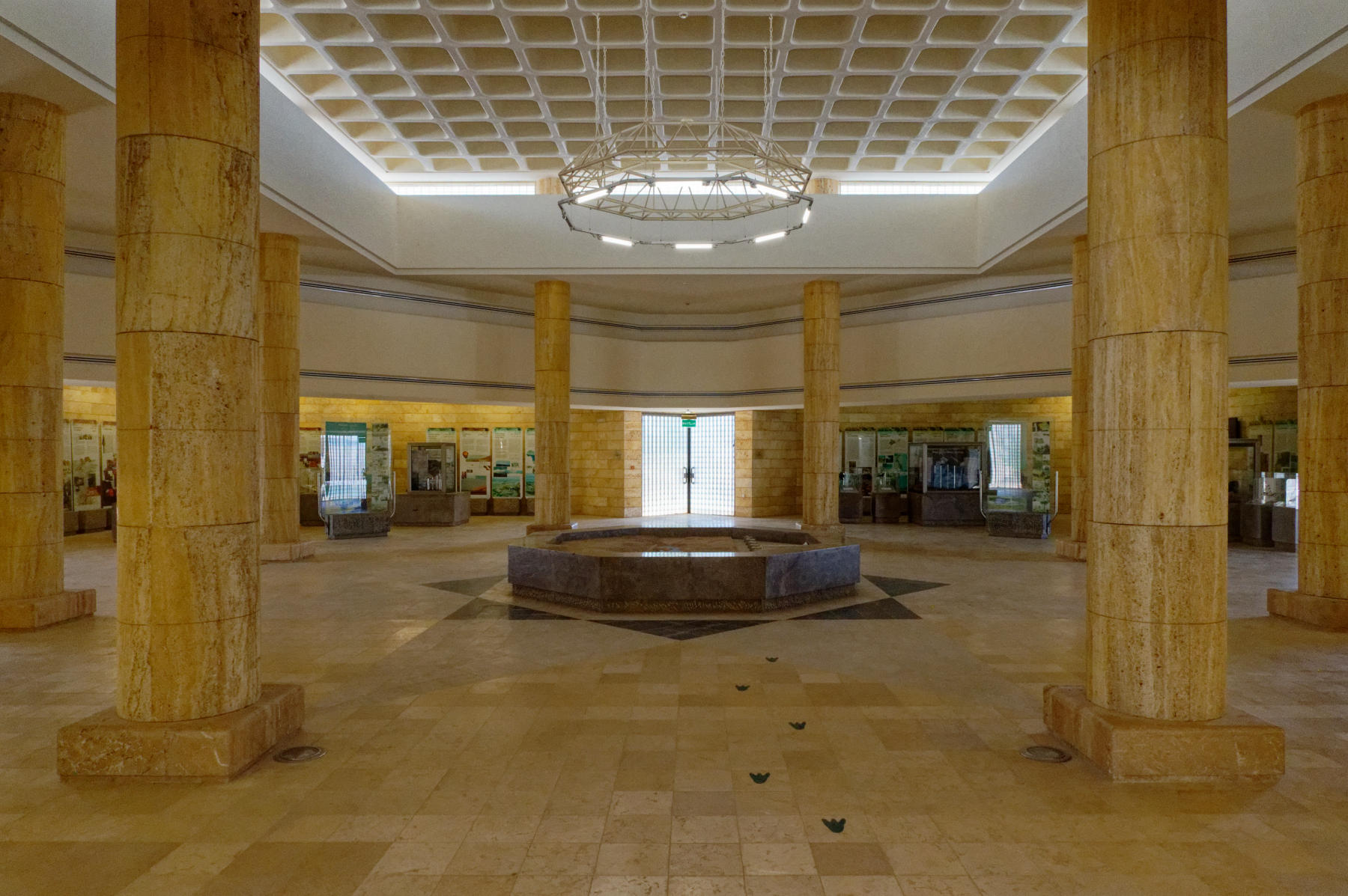 It was this architectural content that kept me interested for a while, but I really was beginning to flag in the heat and the oral agony, which is a shame, because the museum has some interesting exhibits that I simply couldn’t be arsed to read – I just wanted to get back to the hotel by this stage.  There was one arresting installation on the floor by the museum’s door, though. 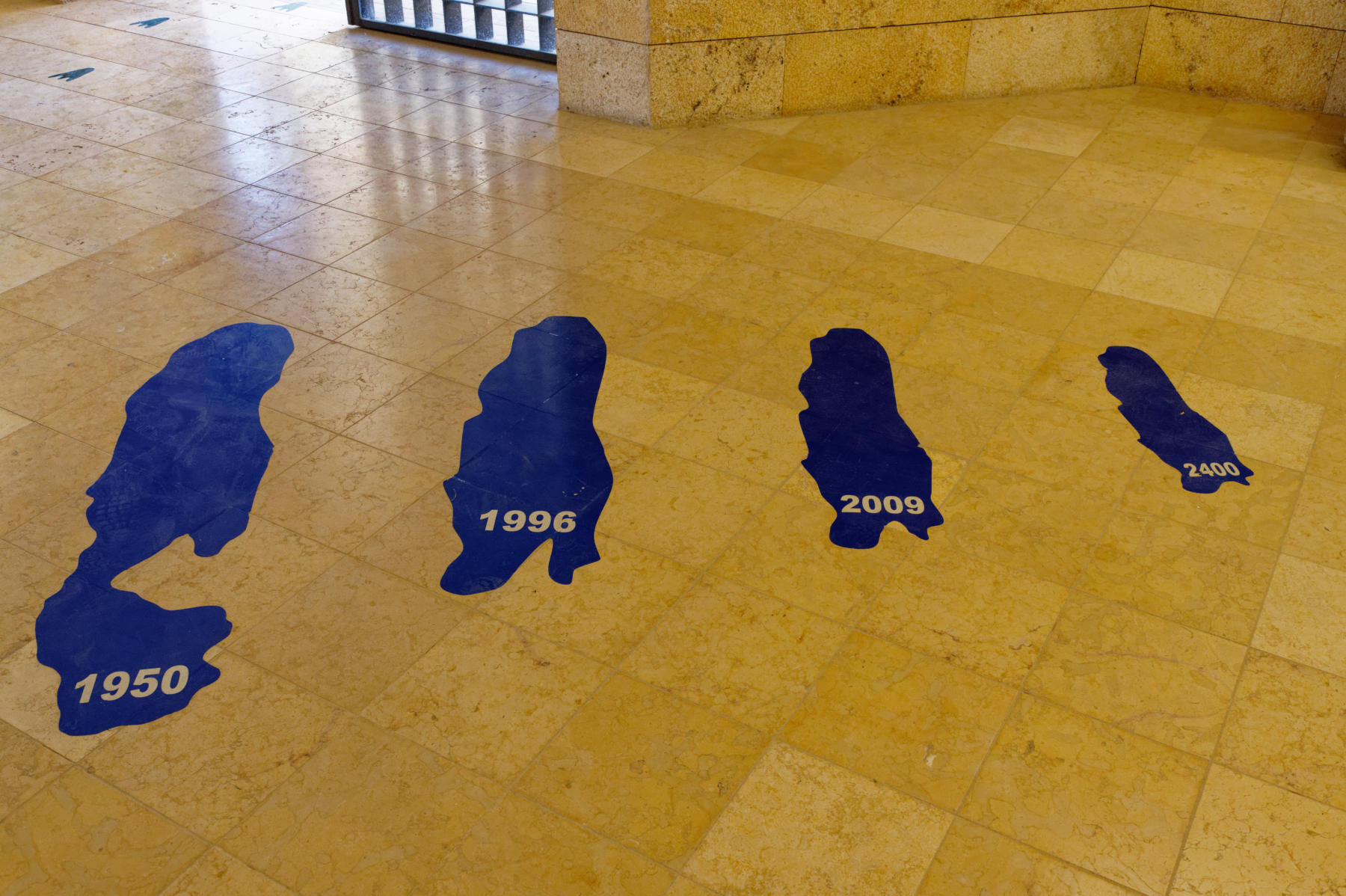 This shows the projected shrinkage of the Dead Sea if nothing is done about anything.  Saeed told us that an initiative to replenish the Dead Sea with waters from the Red Sea had been gradually building for about 50 years, but the pandemic had got in the way and it has effectively been abandoned.

Saeed took us back to the blissful cool of the hotel, where we spent much of the rest of the day relaxing, in my case updating the blog, and building up energy for the evening, for life had sprung a pleasant surprise on us.  Magda and Guy, friends whom I first met when I lived in Sweden 40 years ago, happened to be breezing through on their way to a wedding in Amman on Saturday, and we overlapped at the Kempinski For Just One Night.  Over the years since, they have been responsible for some of my most famous hangovers, so a session with them, given my fragile state, was something to be seriously prepared for.  It turns out that a combination of Afta Med, paracetamol and gin acts as a good anaesthetic and it enabled us to have a great evening catching up, as it had been four years since we saw Magda, and five years since we saw Guy. We all treated ourselves (I think that’s the right word) to a meal in Rehan, the Lebanese restaurant at the hotel, and I even managed a little soup as effectively the first thing I’d eaten all day.  Isn’t it marvellous how good company can overcome mere bodily pain?

That said, my system wasn’t robust enough to allow the meal to degenerate into A Session (ah! memories!  vague and blurry memories!) so despite the fact that there was a bar outside as we left the restaurant, Jane and I decided to head for bed. Anyway, we had to get up especially early and preferably compos mentis the next day, so it seemed the best idea.

As to what it was that we had to get up for?  You’ll have to come back and find out, won’t you?