A three-hour coach journey from Puerto Natales brought us to Punta Arenas and the first slight hiccup in what had been an otherwise flawless logistical flow. Our itinerary instructions said that we would be put on the coach (Buses Fernandez) to Punta Arenas and met there to be taken to the port to board Ventus Australis, a brand-new (started service in January 2018) 200-passenger ship which would take us around Tierra del Fuego, Cape Horn, the Magellan Straits and other evocative destinations (though the Beagle Channel sounds a bit more like a TV service that hunt followers or Snoopy fans might tune into).

What became apparent as we approached Punta Arenas was that there were multiple stops in the city, starting at the airport and working inwards. When we got to the Buses Fernandez terminal and everyone looked to be getting off, we followed suit. But there was no friendly face above a card with our names on it, so we spent a few angst-ridden moments wondering if we should have stayed with the coach. Jane got on the phone (thank God for mobiles) to our tour organiser’s local contact, who also professed to be puzzled as to the absence of reception committee. To cut a long story short, some moments later a driver showed up, full of profuse apologies and muttered Spanish among which Jane thought she heard the words “pneumaticos”, so we charitably assumed that he’d had trouble wth a flat tyre. Anyway, the practical upshot was that we got to the port, checked in – and found that we had three hours to kill before they’d let us join the boat.

So it was that we headed off into the bustling metropolis of Punta Arenas, in search of coffee. Although it has a much larger population than Puerto Natales, there isn’t frankly, a lot to see in the town; but we did stumble across the buildings that were the “palaces” (very grand residences) of some of the pioneers of the vast sheep-processing business whose buildings now form part of the Singular hotel in Puerto Natales, including Sara Braun and Jose Norgueira. Fortunately their palace had found modern use as a hotel with a bar, so we had lunch there, in the Shackleton Bar, whilst (inter alia) watching a DVD of Shackleton’s ludicrous folly of exploring Antarctica and reckless gamble taken to rescue the men he nearly killed doing it. I had a local Pale Ale, which the barman charmingly called a “Pally Ally”.

Well, we had three hours to kill before they let us board Ventus Australia. What’s a chap to do. Time for the bar, eh @mikeeeboreham? This beer was charmingly pronounced “Pally Alley” by our waiter #Chile #Patagonia

There was WiFi available at the boarding terminal, and so the pre-boarding hall was awash with people taking their last sip of internet before four days off the grid. I was one of those people.

We were eventually allowed to board, and discovered that the Ventus is indeed a very fine ship, with great facilities, good food and obliging service. There was also hot water available at the coffee points. See, I knew it was going to be worth bringing those tea bags with us.

For those with cruising experience, the next hours would follow a familiar pattern – welcome drinks, introduction to the crew and tour officials, safety briefing (including how to cha-cha-cha into a Zodiac rib), then the trepidatious journey to dinner to find out whether you’re going to get on with whomever it is you’ll be eating with. We struck lucky, with a nice Australian couple d’un age not dissimilar to ours – Lynette and Ken.

The next day saw the first excursion, to Ainsworth Bay, where our guide, Rodrigo, led us along an easy ramble through bogs and forest, explaining at various points what we were seeing – plants, lichens, moss, trees. Oh, and glaciers. Our starting point offered us a great view of the Marinelli glacier: 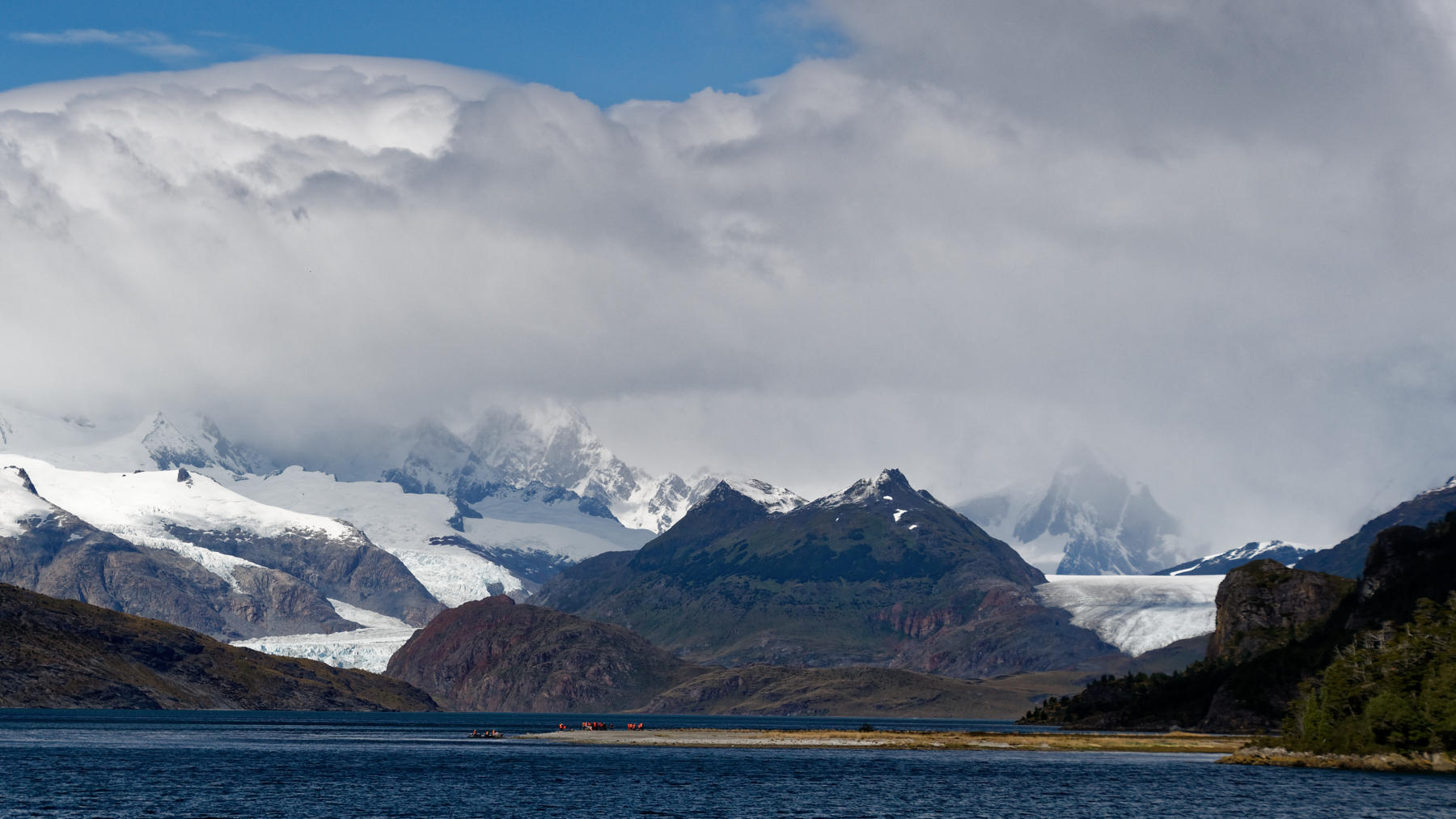 You can see it either side of the central hill in the photo above. Rodrigo gave us, as evidence that this, like most glaciers in the world, is receding, the nugget that 100 years before the glacier reached to the point from where I took this photo. Evidence from original photos by Alberto de Agostini.

The ramble took us through a very photogenic environment. 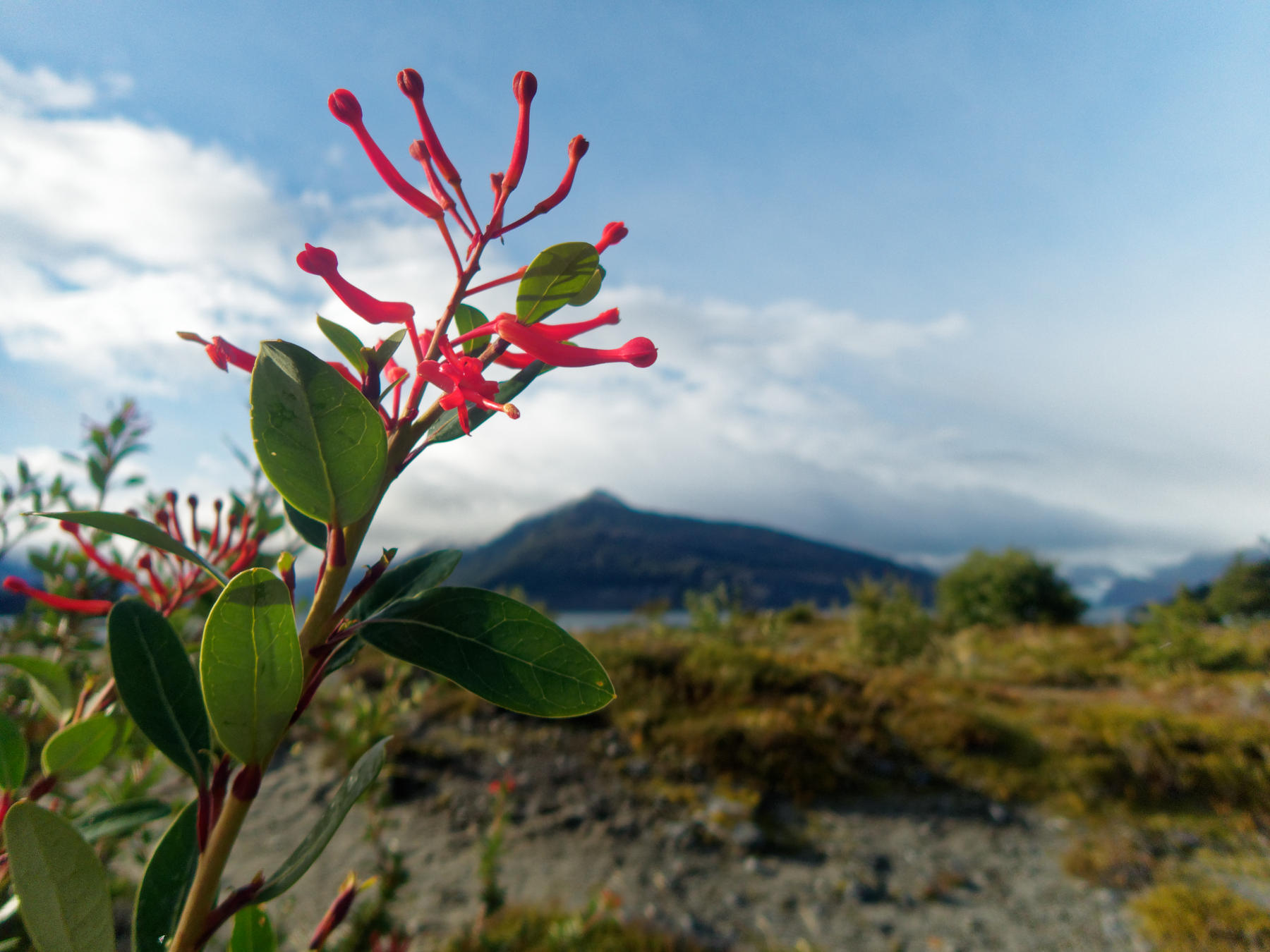 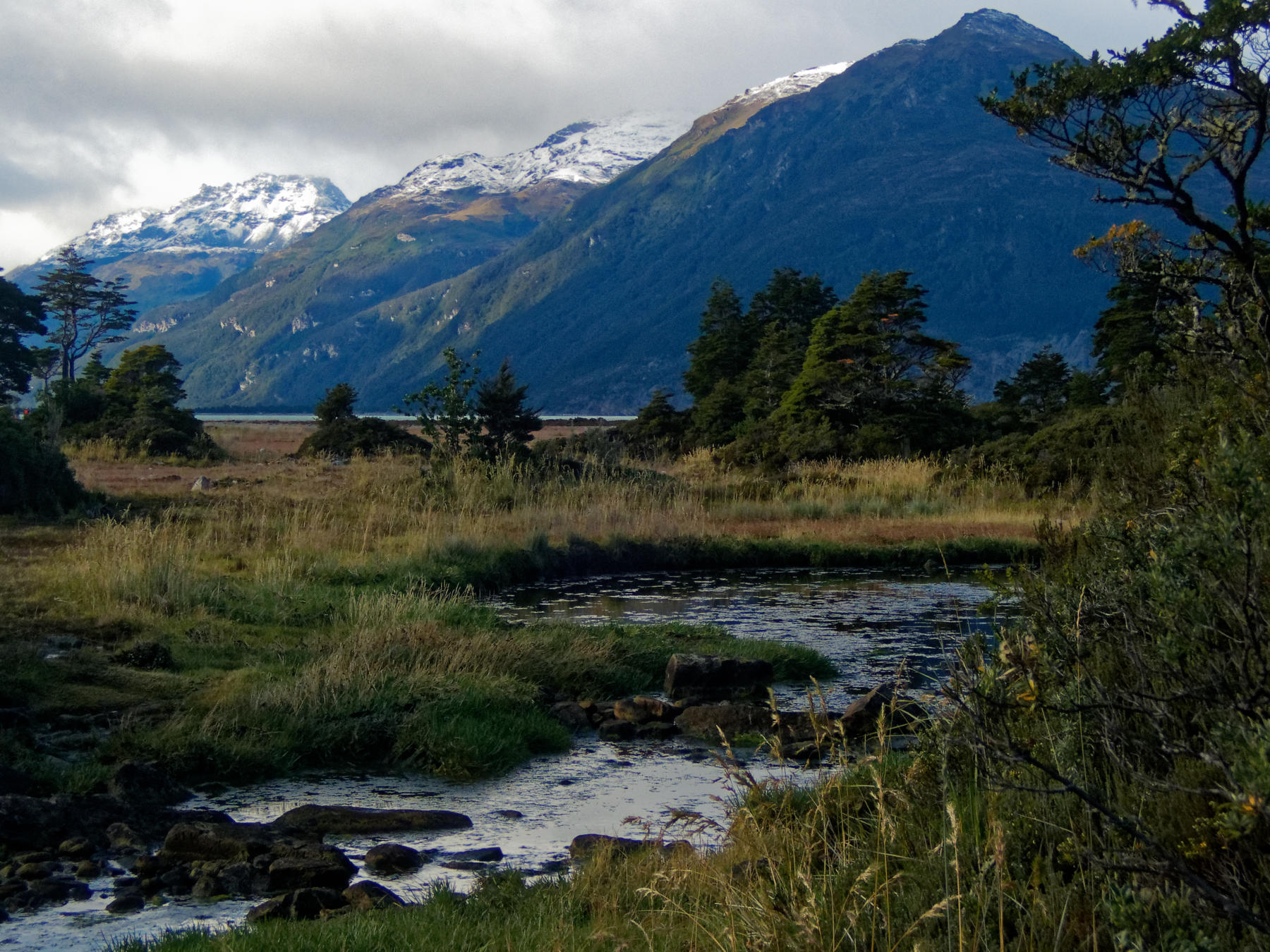 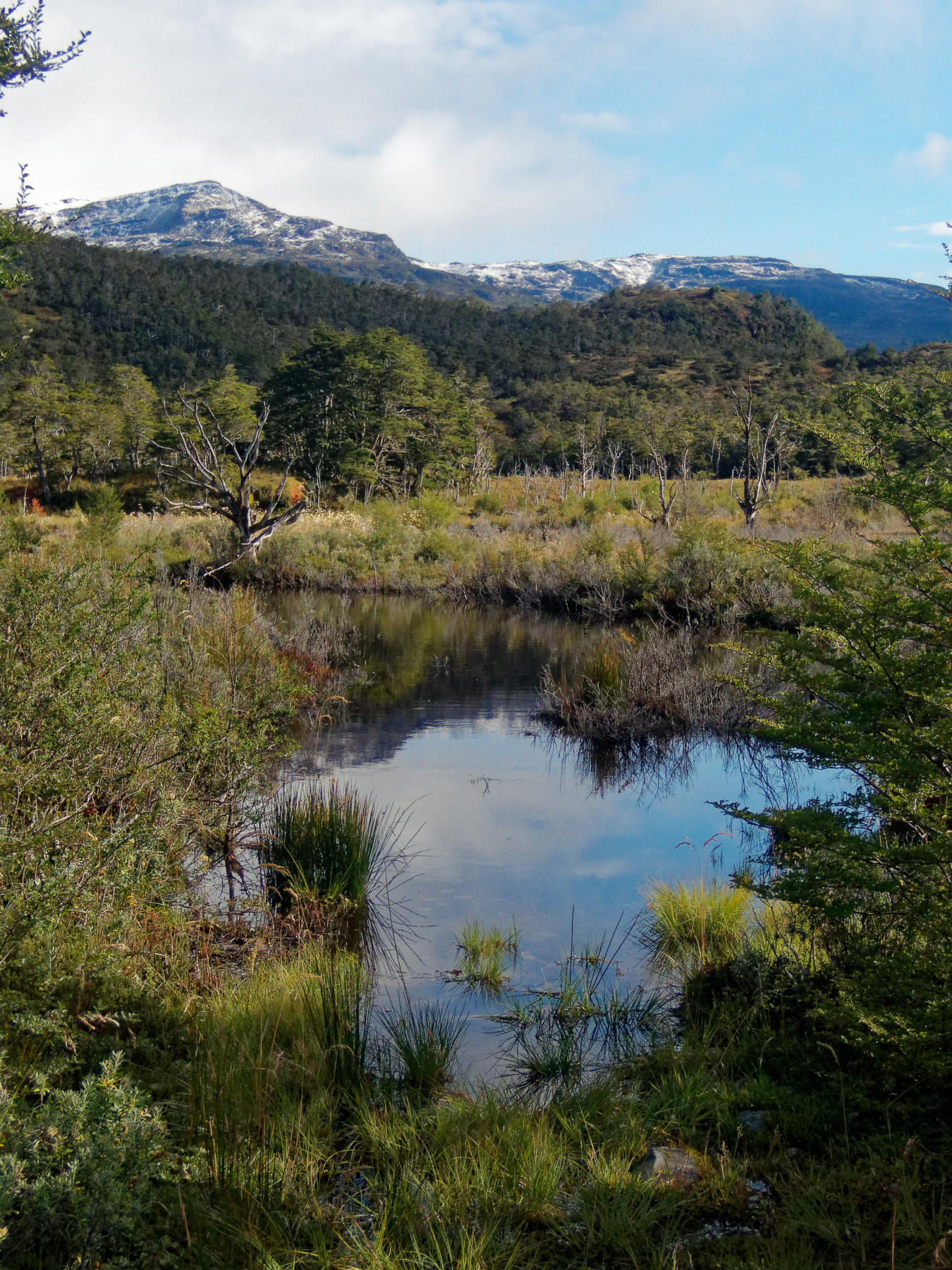 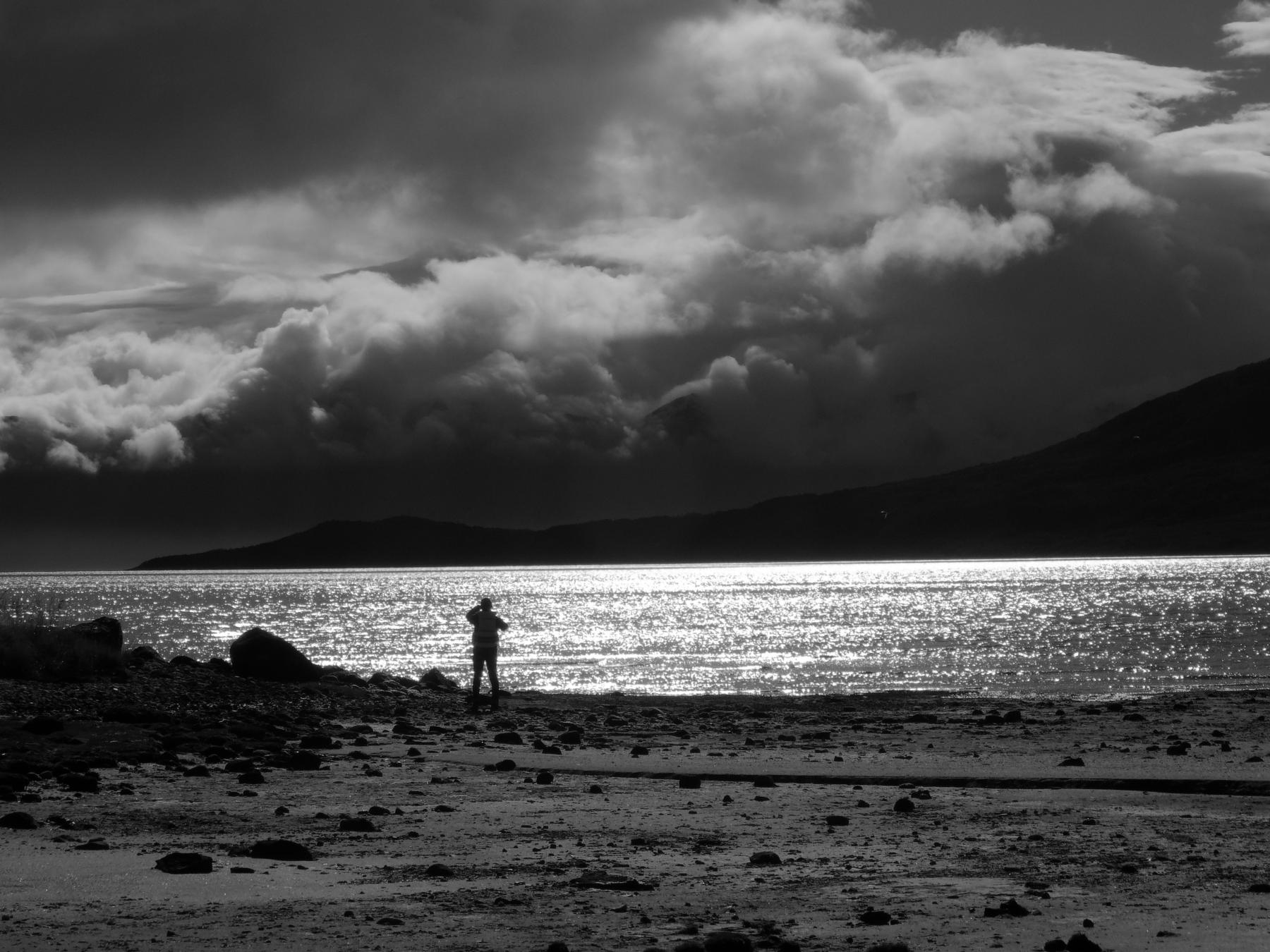 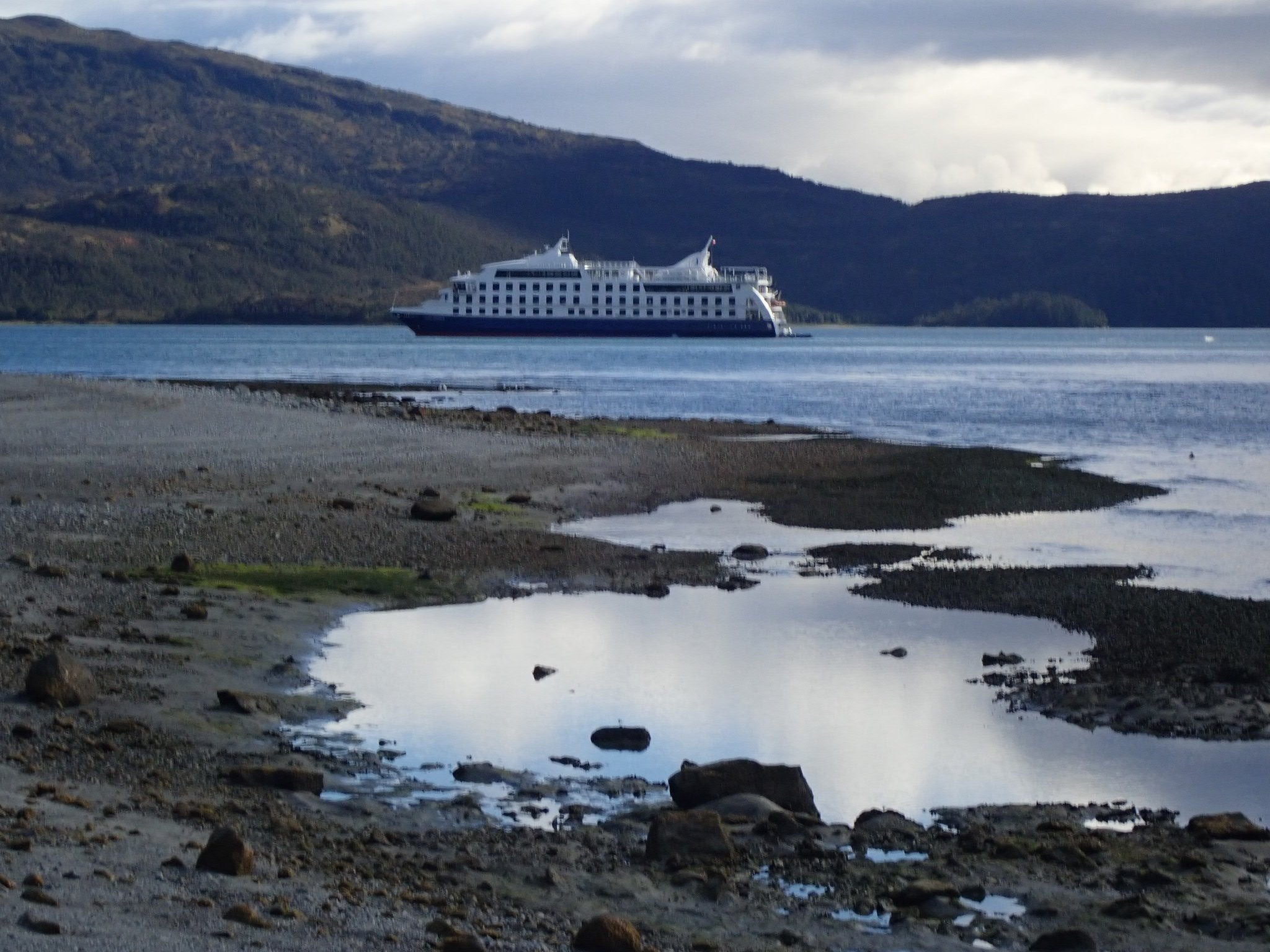 On the way back, in a lovely piece of serendipity, the Zodiacs were accompanied by a pod of playful dolphins, which spent a couple of hours frolicking around as the ribs went back and forth to pick up groups from the shore. What is it about dolphins that makes seeing them such an engaging experience? 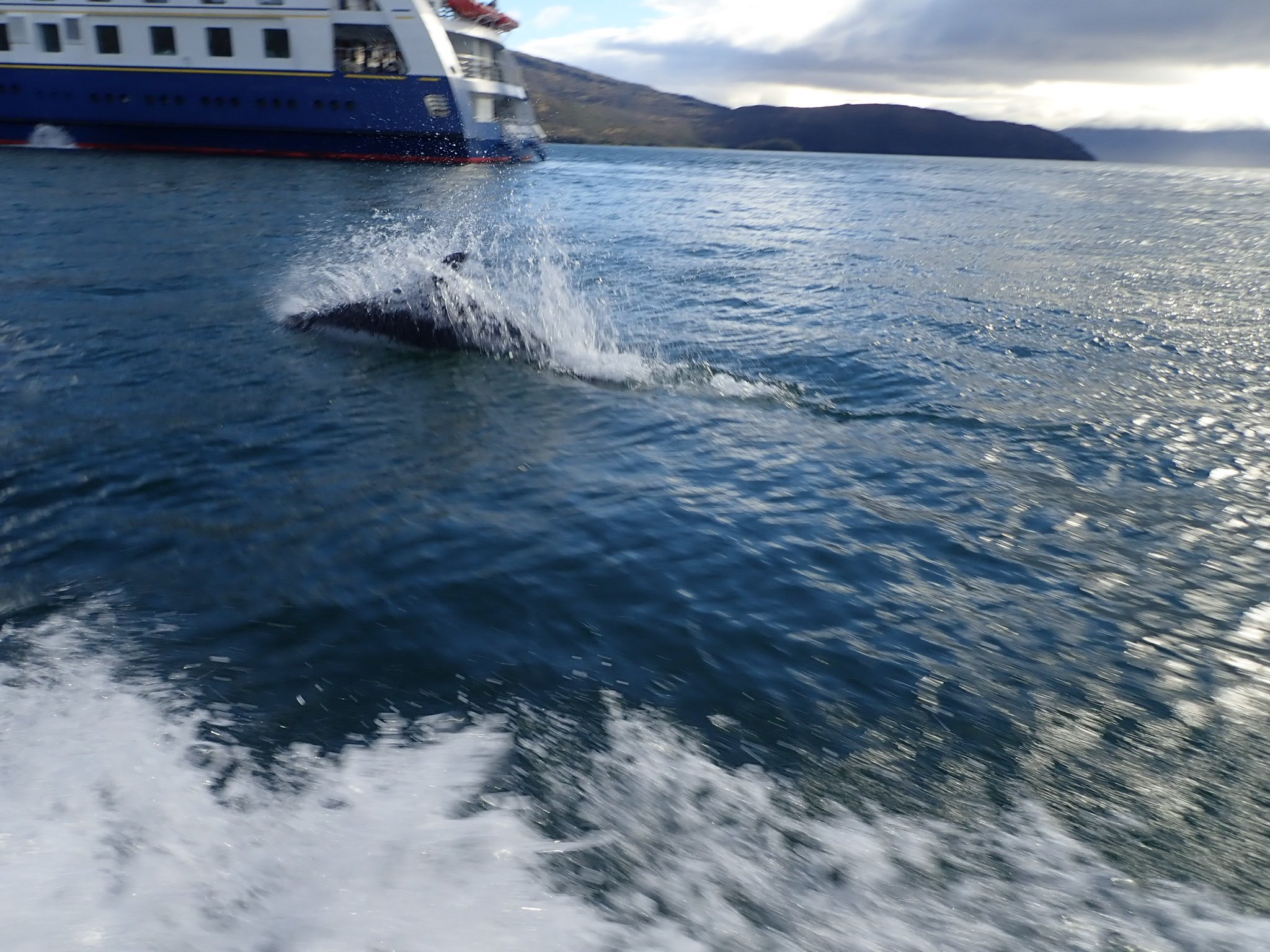 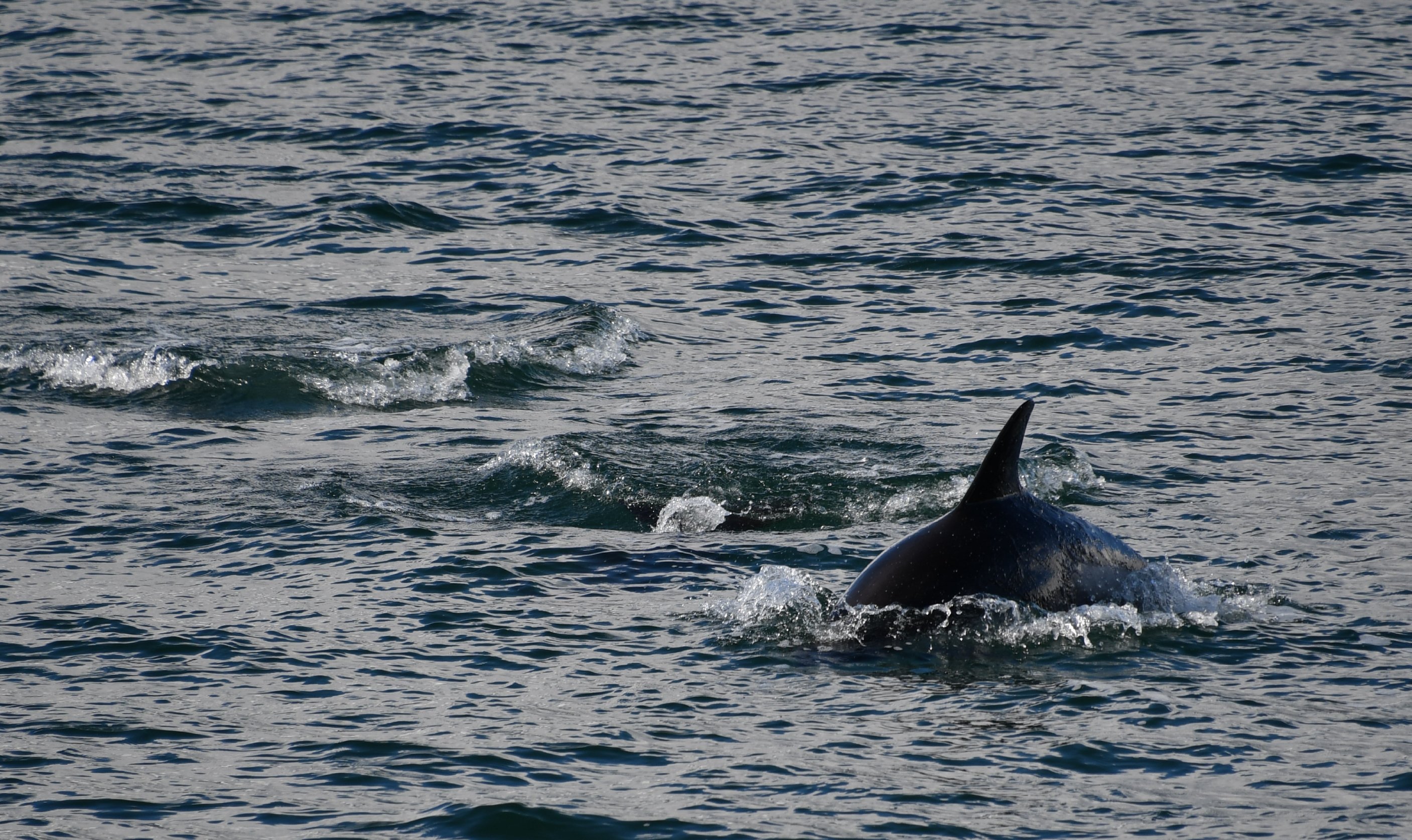 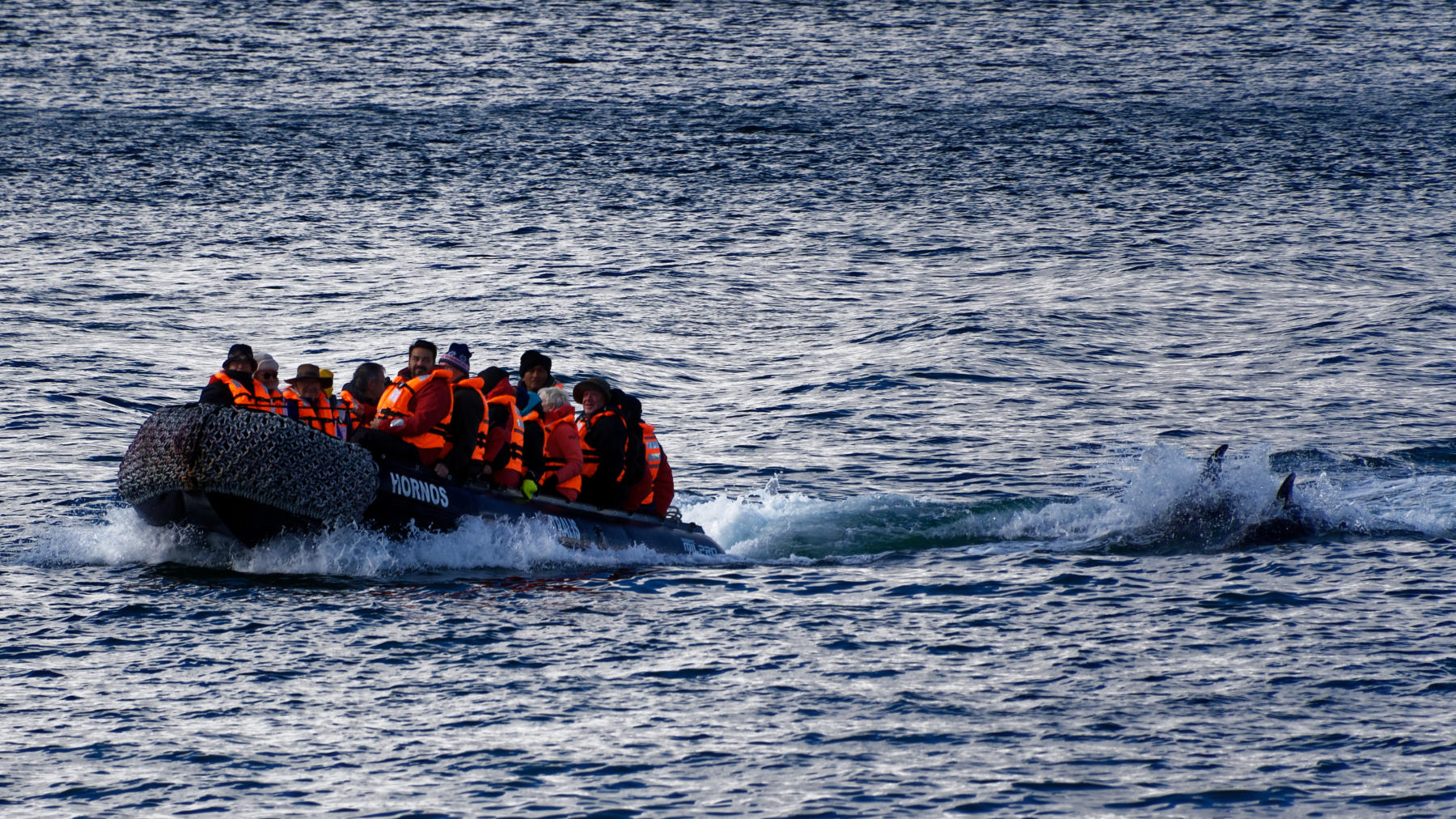 The other expedition that day was to the Tucker Islets, where the advertised attractions were Magellanic penguins 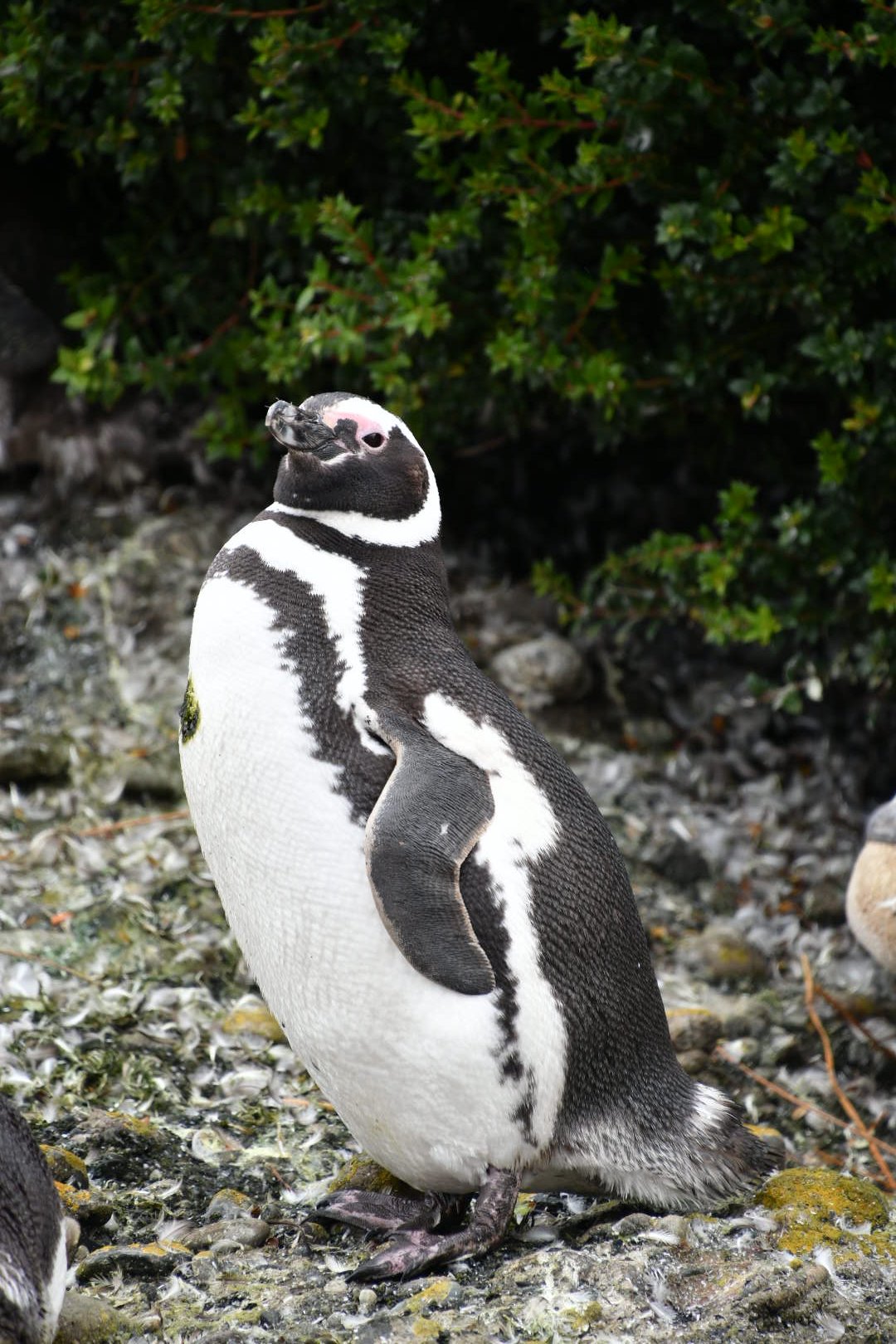 and the common cormorant, or shag. 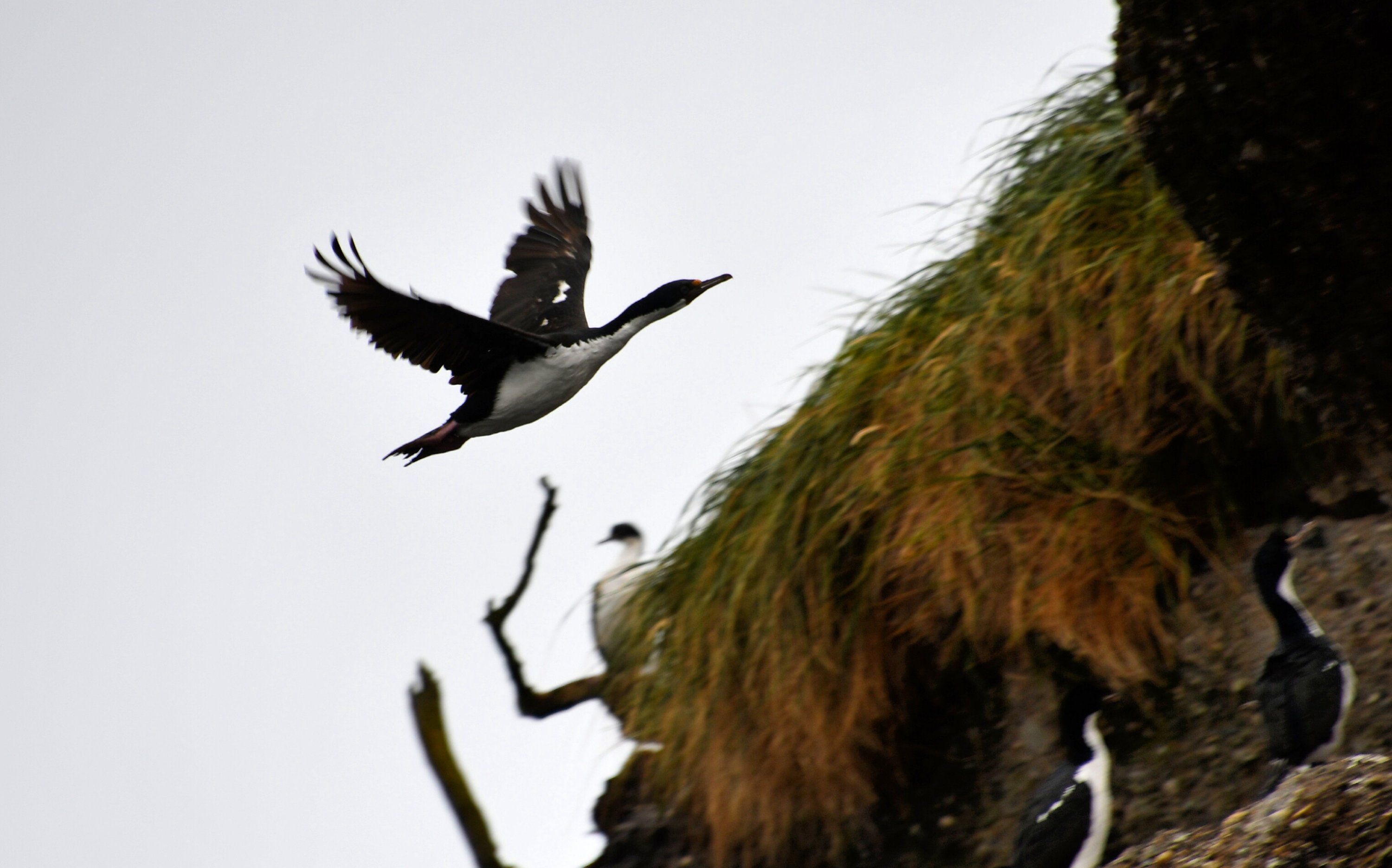 and, while it was nice enough to see them and learn a little about them, what was more interesting to me was some of the other action going on. For example, there was a turkey vulture glowering at proceedings, presumably hoping for a spot of lunch 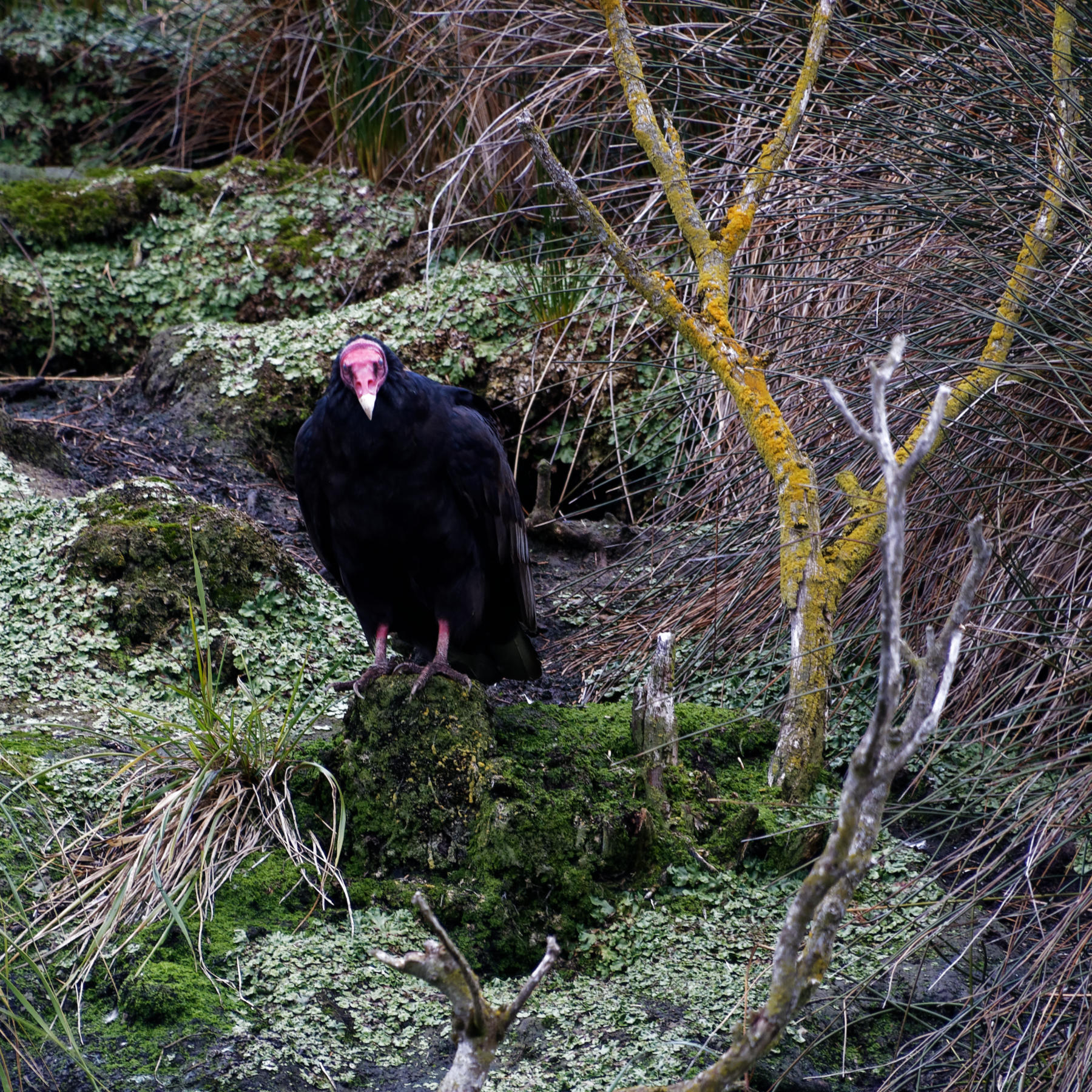 and several skuas squabbling and fighting over whatever opportunities they found 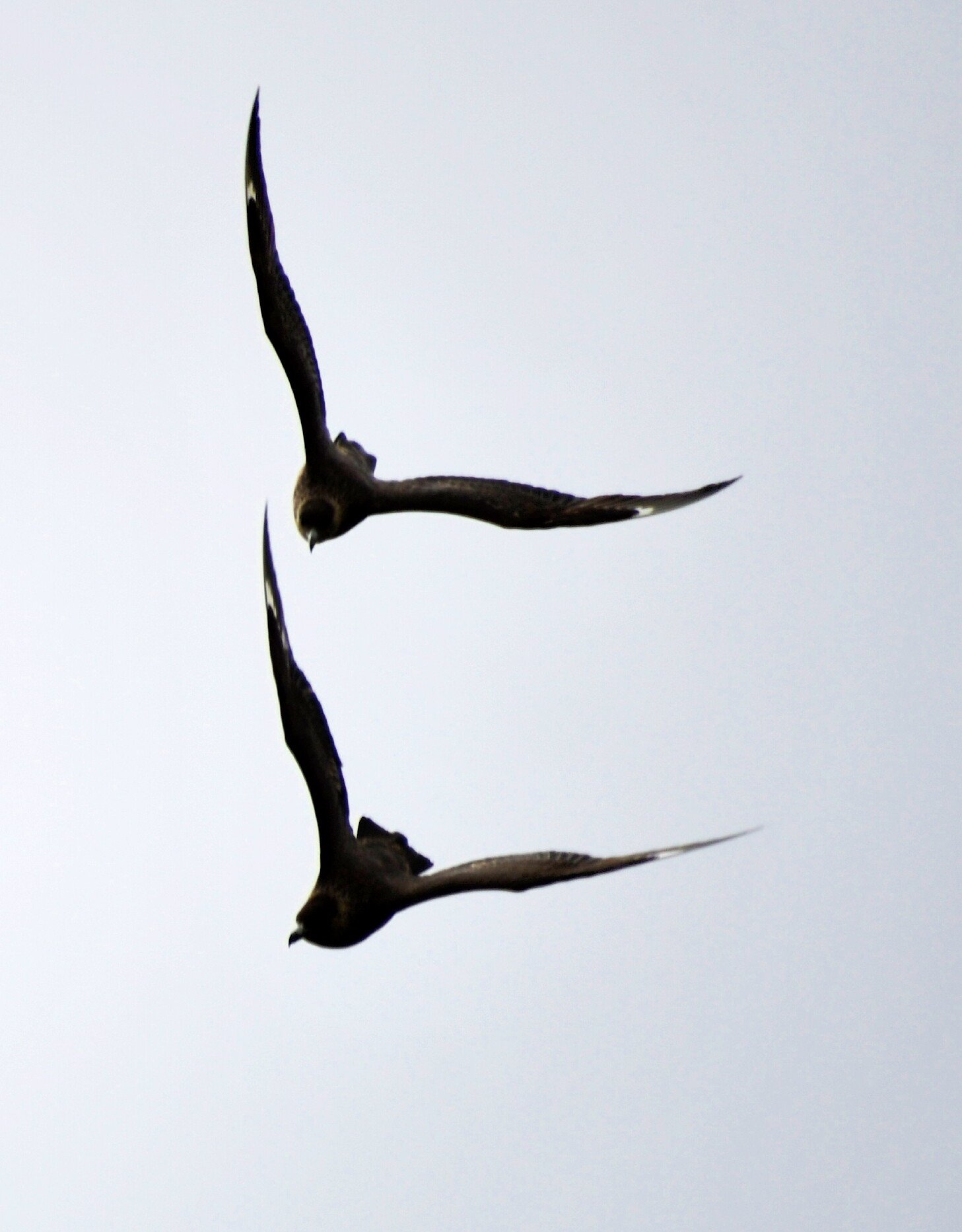 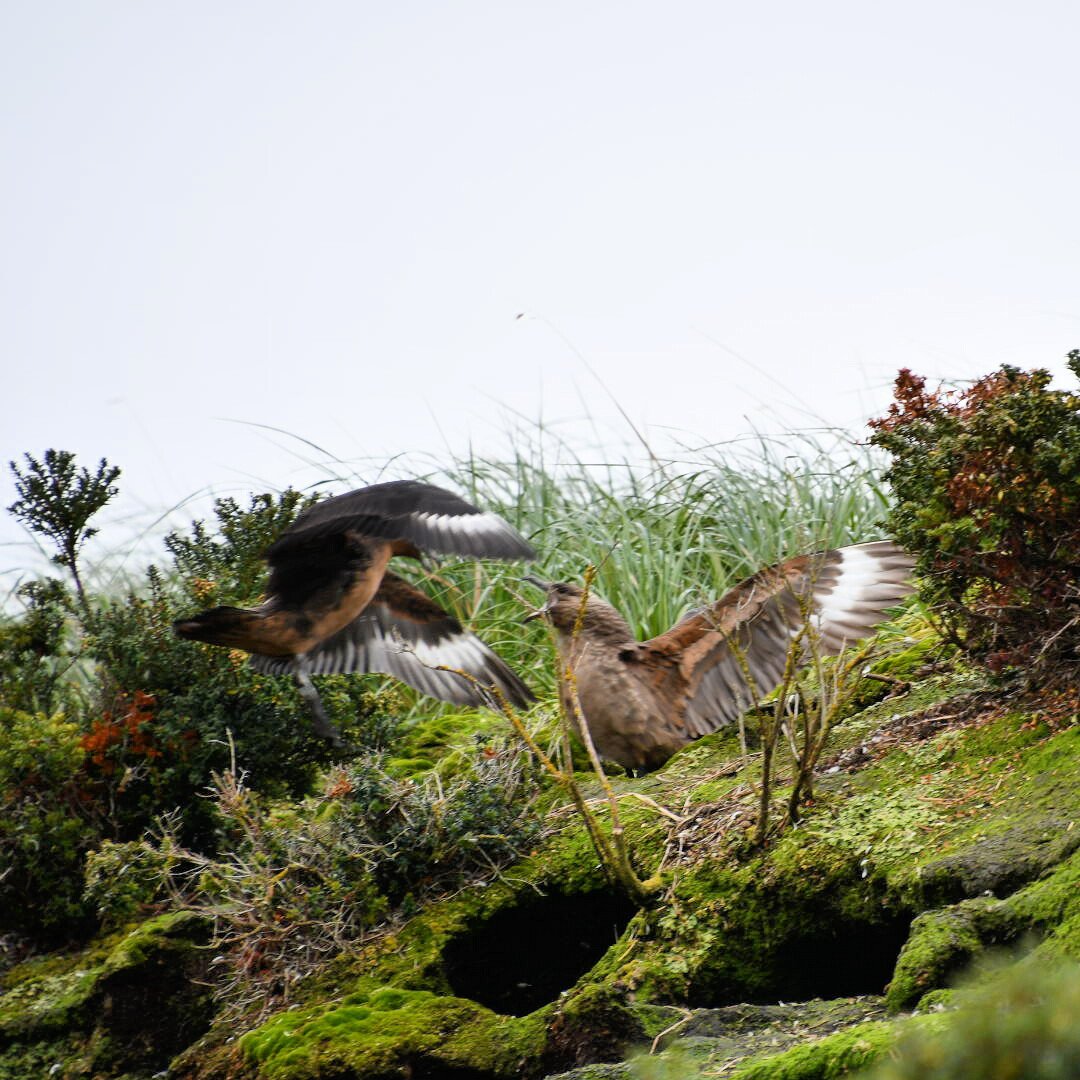 These two expeditions, and a couple of G&Ts at the bar, closed off what was a very good day one, and left us with the mouth-watering prospect of an expedition to a glacier on day two. Stay tuned for the next thrilling (and probably chilling) instalment!