Friday 5 August 2022 – It’s three sleeps until we leave on a trip to Canada which will involve us basically crossing it from left to right, Doing Canadian Tourist Things – seeing grizzly bears, polar bears, northern lights, glaciers, mountains, whales, maple syrup, that kind of thing. It’s quite an ambitious itinerary and you can – of course! – keep tabs on our progress through these very pages.

However, we are in the throes of the agony and the ecstasy of preparation – dealing with (seemingly endless) paperwork, indecision about What To Pack and anticipation of how much fun it’ll be.  Complicating this further is the only bit of our holiday which doesn’t involve Canada.  The first week or so will actually be spent Cruising The Inside Passage which sounds rather like something the polite people don’t do in public but actually means embarking on a ship in Anchorage and exploring coastal parts of Alaska on the way to entering Canada at Vancouver. This means that we fly to Vancouver (Canada), and after an overnight stay we fly on to Anchorage (USA). So we have to deal with two sets of immigration bureaucracies.  I’m profoundly glad that Jane, my wife, is superbly well-organised, so I’m sanguine that those bits that are under our control are sorted.

The cruise bit is mind-boggling. We are not experienced cruisers, if you’ll pardon the phrase.  We have done a couple of river cruises and a sea cruise in South America. None of the ships involved more than 200 passengers, so travelling on a ship with 600 passengers is going to be a new experience for us.

We are travelling with Silversea, on Silver Muse. The ship calls at faraway places with strange sounding names, like Skagway and Ketchikan; four ports between Seward, where it starts, and Vancouver, where it stops. 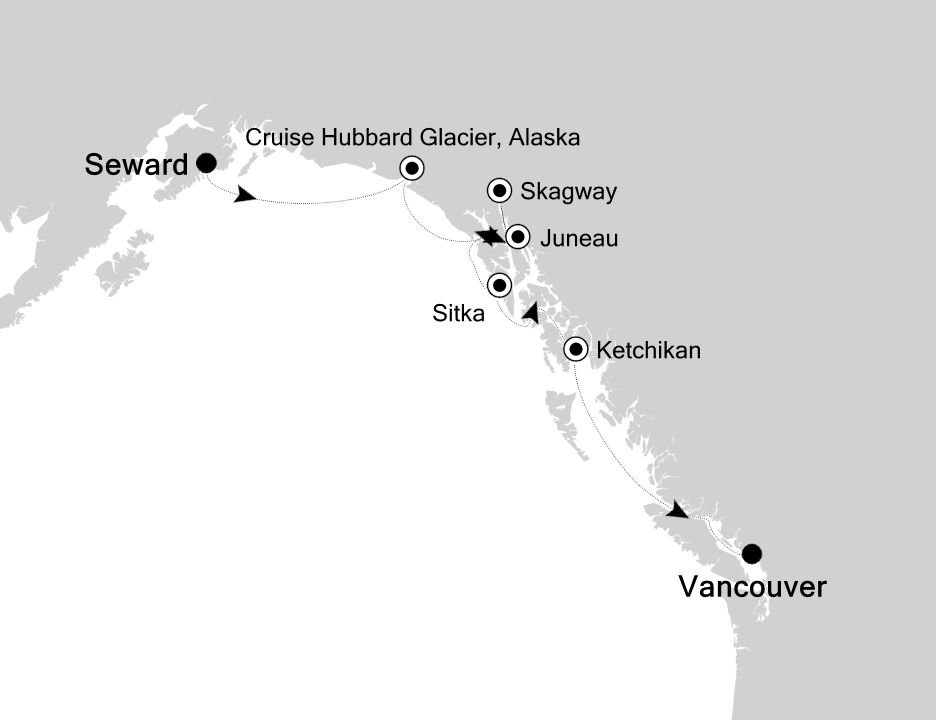 The mind-boggling bit? It’s the cruise programme, which has clearly been designed by someone who loves logistical challenges.

On our previous cruises, the options for passengers were: (a) go ashore and join the tour of the local town; or (b) don’t. By contrast, during the week we’ll be aboard Silver Muse, passengers can select from 93 – 93! – activities spread over the four ports of call.  The document which describes the options is 72 pages long and offers a frankly bewildering sea of possibilities.  There’s the obvious stuff – wildlife (often including whales and/or bears), glaciers, helicopter or seaplane trips for the affluent, and, of course, tours around the ports of call. But the hyperactive event organisers at Silversea have also arranged to also offer sea kayaking, dog sledding, lumberjack shows, bicycling (even sea bicycling) and ziplining among a plethora of Things To Do. Any illusion of wafting along for a week nursing a cocktail and relaxing have been thoroughly dispelled. All in all, it has taken a couple of days of wandering through web pages and discussing among ourselves to come up with our likely programme, and it looks like we’ll be exhausted at the end of it, dazzled by the variety and novelty of what’s been on offer.

If that weren’t enough complexity, we have to try to second guess the weather for the next two months in order to understand what to pack.  Since we’ll be seeing northern lights and polar bears, we’re told to bring skiing gear and boots; we’ll be hiking so we have to bring walking boots and wet weather gear; and it’s quite likely that some places will be quite warm, so we’ll need T-shirts and shorts. We have to get this into 23kg, somehow.  And I have all my photo gear to consider, too. I have documented my angst about this separately to spare you.

Another thing to worry about is the actual travelling itself.  If the papers are to be believed we are in for some olympic-level queuing which will call for heroic patience.  Luck will allegedly be involved when it comes to being in the same continent as our baggage when we land (I’ve bought some baggage trackers which I hope we don’t need to make use of). A sense of confusion, anticipation and excitement threatens to overwhelm.

I frame this as being a set of agonising decisions in the face of crippling uncertainty. Of course it isn’t, really – it’s supremely exciting and we’re really looking forward to starting the trip.  I hope you’ll spend some time in these pages catching up with our travels and what we see as we go.

Onward, then: to Vancouver and then – North! to Alaska! (Sound needed….)