Saturday 21 and Sunday 22 May 2022 – Reader, I offer you a respite from having to wade through dozens of photos, similar to the respite we’ve had over the last days from having to Do Stuff All The Time. This entry will be mercifully short.

For the week up to and including yesterday, my Garmin Vivosmart calculated that I had exerted myself for 762 minutes at moderate intensity and 138 at vigorous intensity. This has been the hardest week since September last year when, you’ll remember because you read these pages,  Jane and I were walking a couple of hundred miles around Menorca.  However, yesterday and today registered a big, fat 0 on the Garminmeter mainly because we’ve not done much.  Here is what we have done.

Before our departure from Wadi Rum at an entirely reasonable 9am, I took a few more snaps of the site, including the view through one of our bubble’s windows. 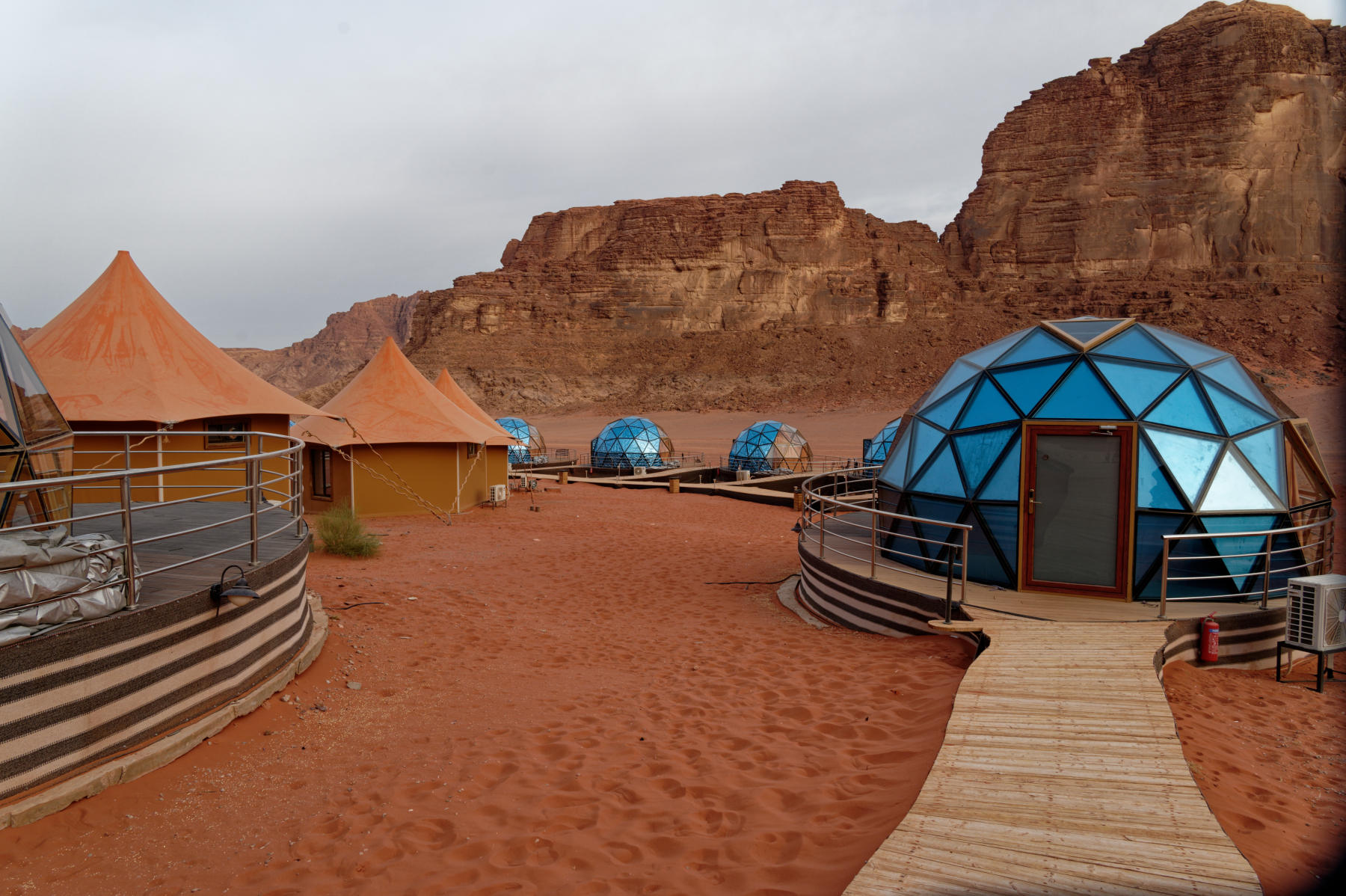 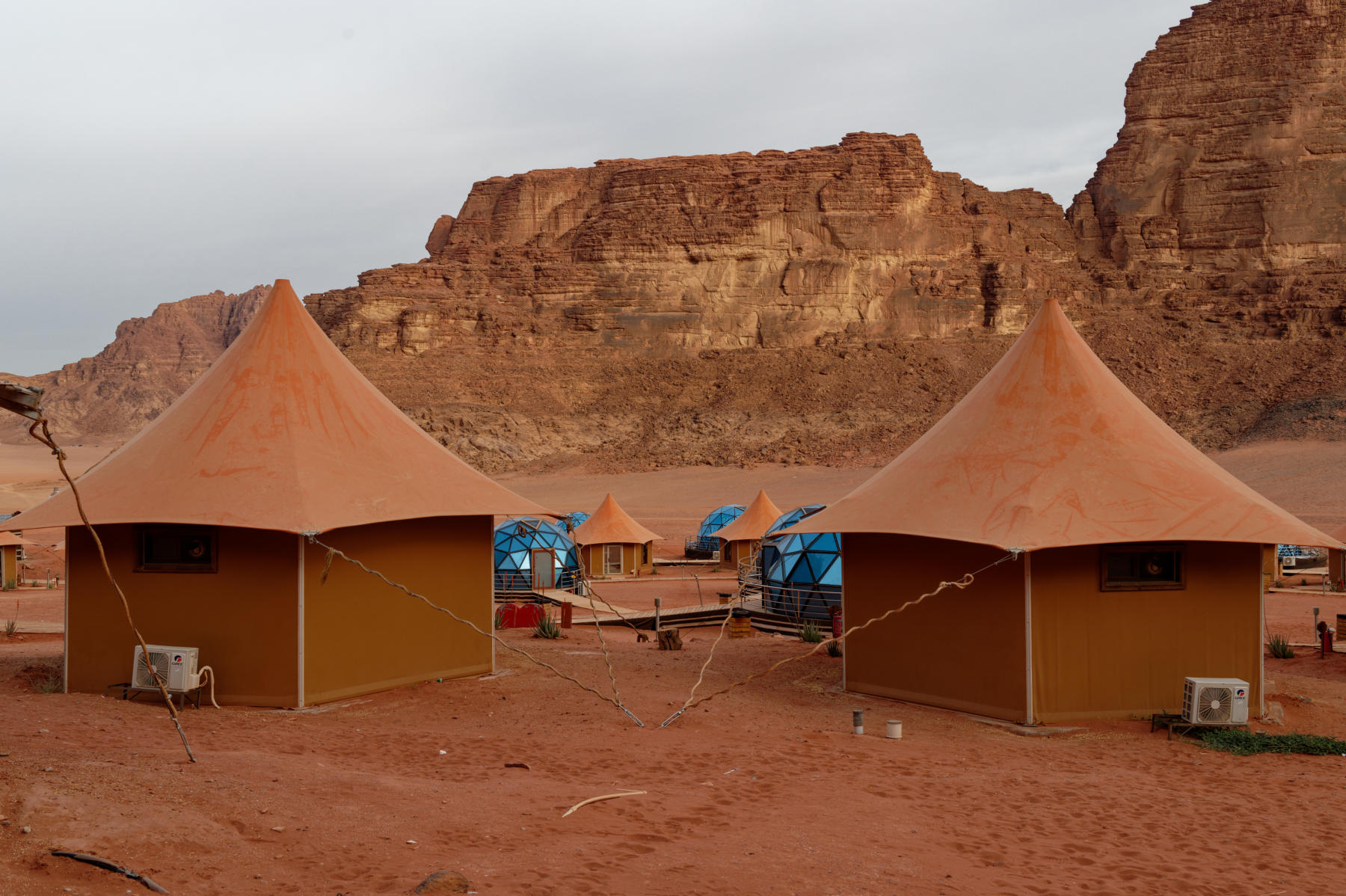 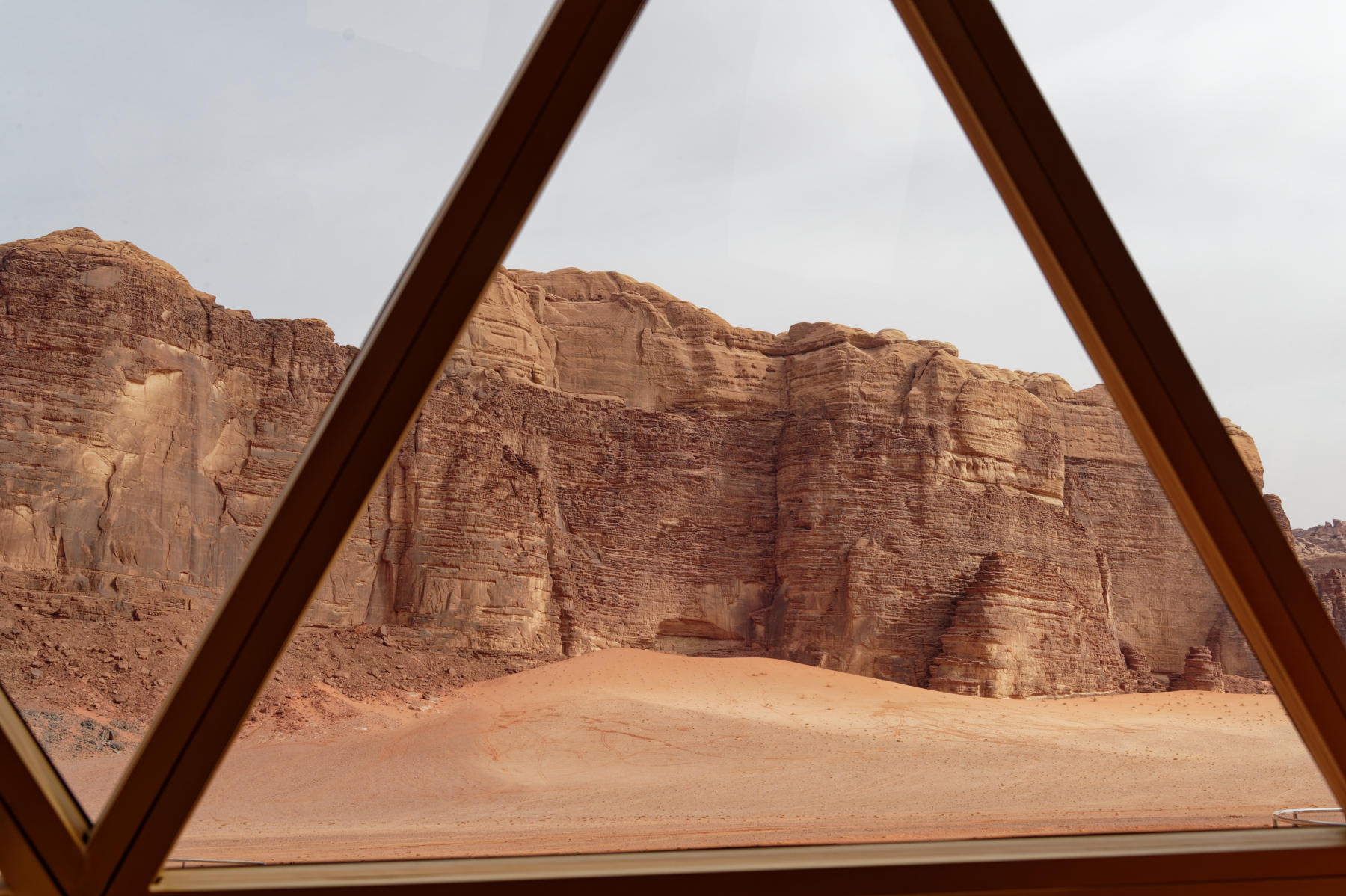 You’ll notice that the silver sun-deflecting coverings have been taken off the bubbles – they are put on during the day and staff remove them in the late afternoon.  The site has expanded over the last few years; Jane found a couple of aerial photos which show its growth from pre-pandemic 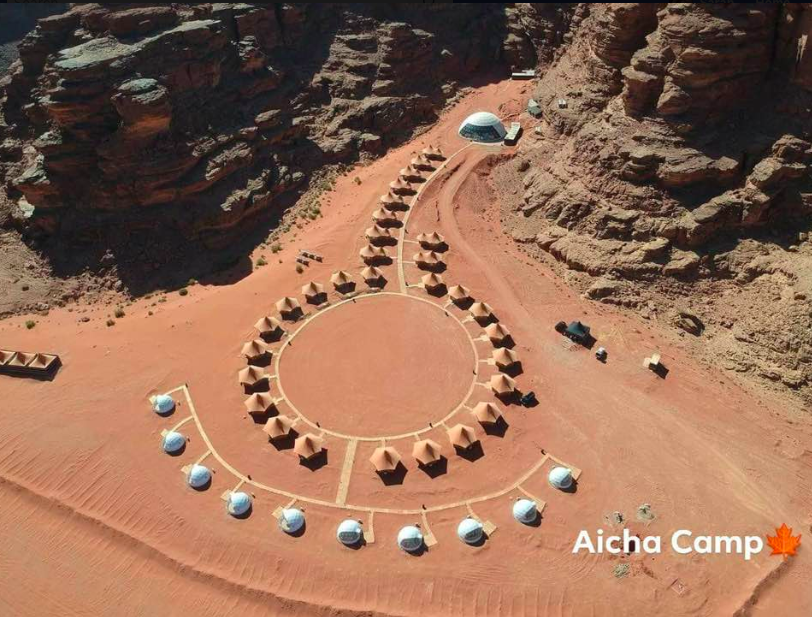 to now (I’ve ringed the one we slept in). 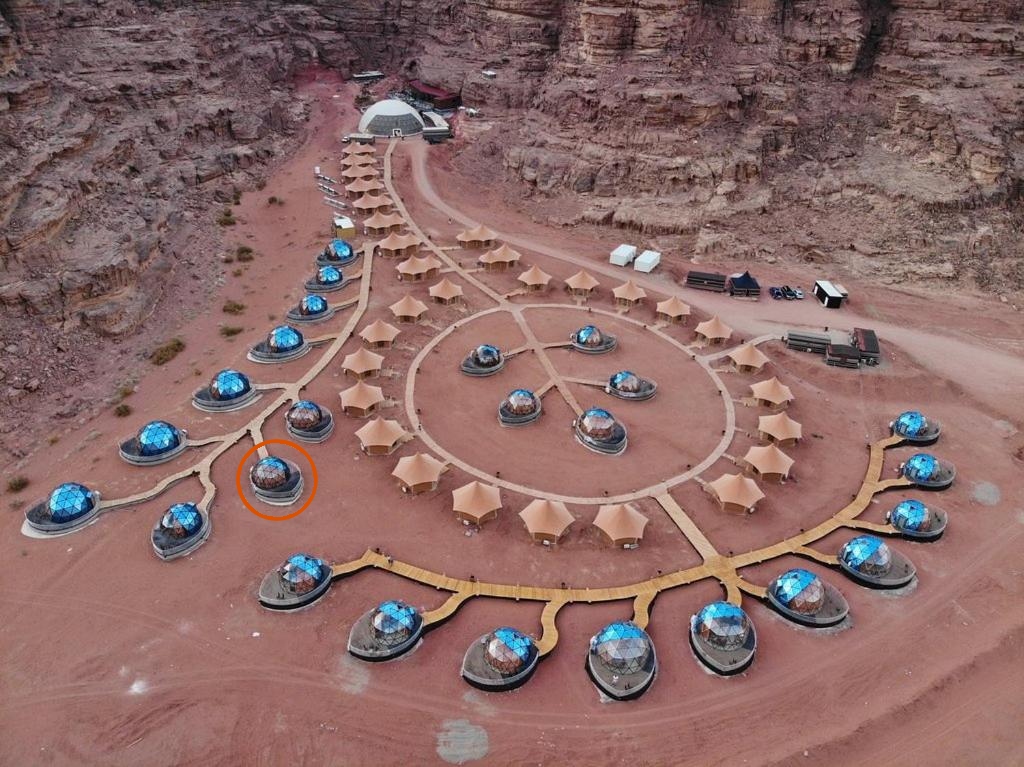 There are reviews from May 2019 which mention (OK, complain about) construction work being done, which gives a good idea of what’s been going on.  I guess it must have taken quite a lot of confidence to carry on the development during the pandemic and hope that the tourists would return.  I don’t think the site was anywhere near full, but one hopes that the owners have made the right call for the future.

We were transported back to the entrance in Rum Village and managed to find Saeed among the slightly shambolic goings-on that inevitably surround trying to reunite punters with drivers over a reasonably large parking area.  And then we were off to Aqaba.  The countryside we passed through was granite and striking. 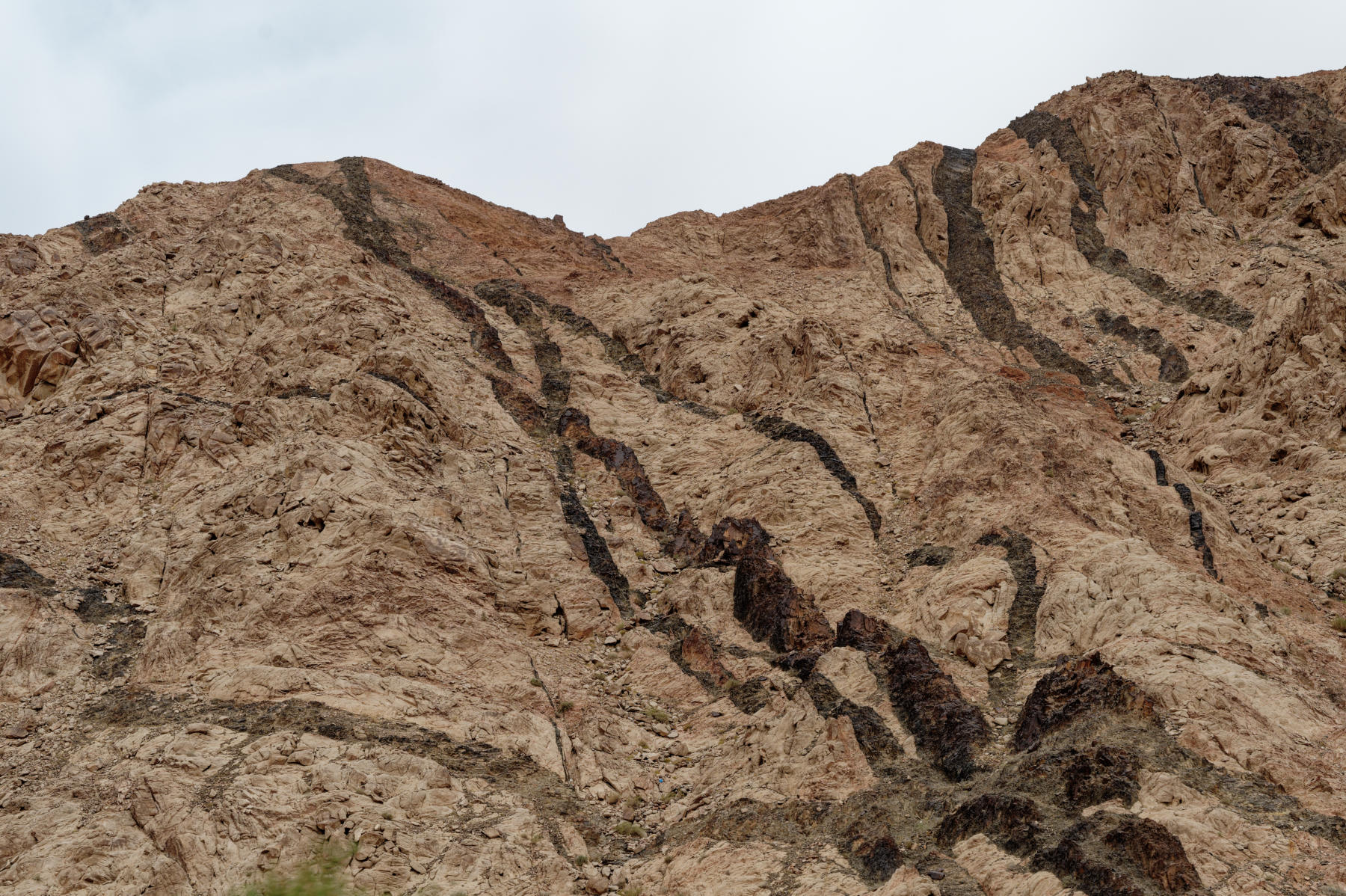 Saeed gave us a quick driving tour of Aqaba, which is a small city, but busy because it was the weekend (the Arab weekend is Friday and Saturday, remember, so it’s chaos arriving on Thursday evening and leaving on Saturday evening or early Sunday). One thing we noted was the ubiquity of a wonderfully colourful tree by the roadsides. 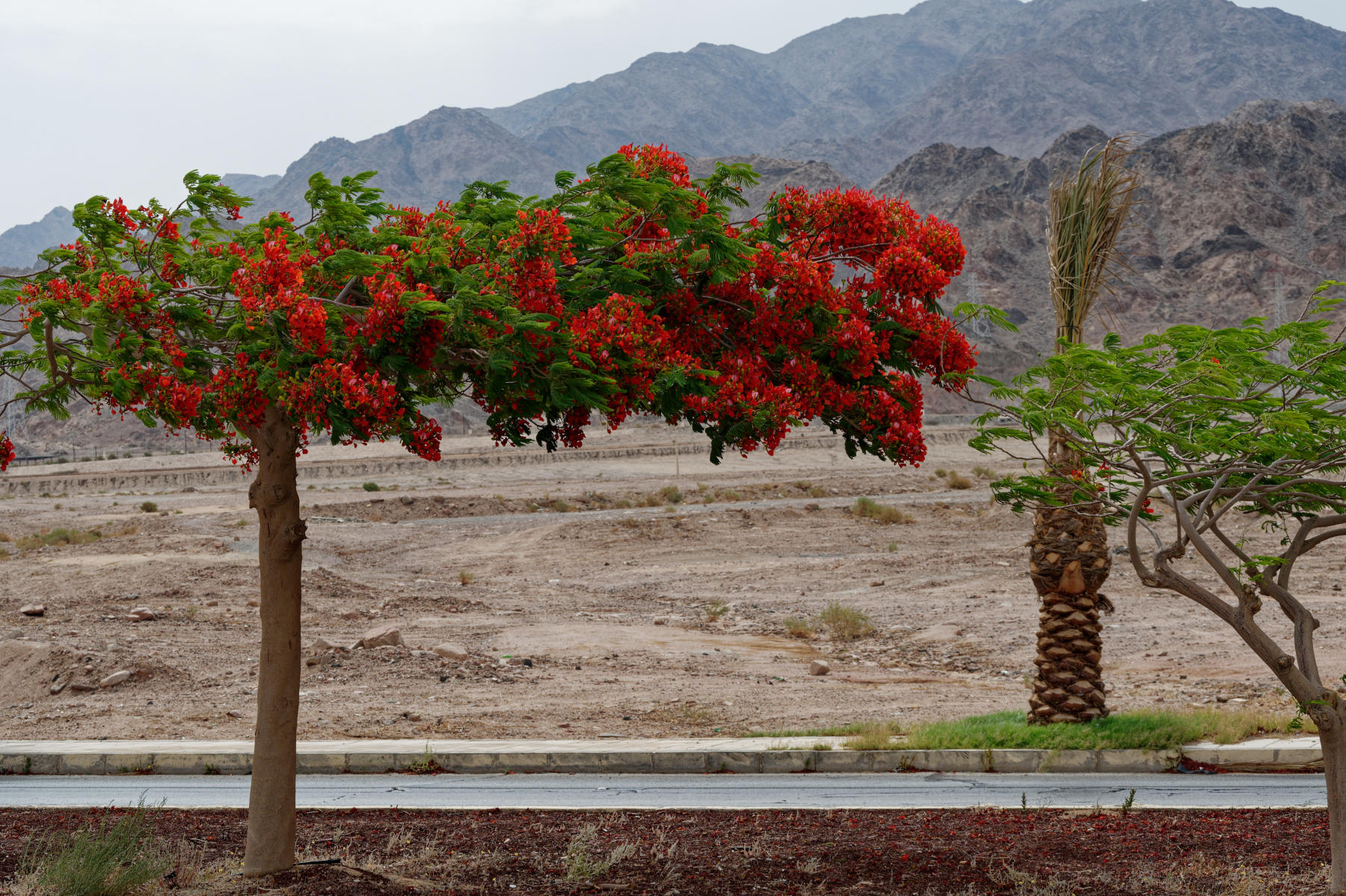 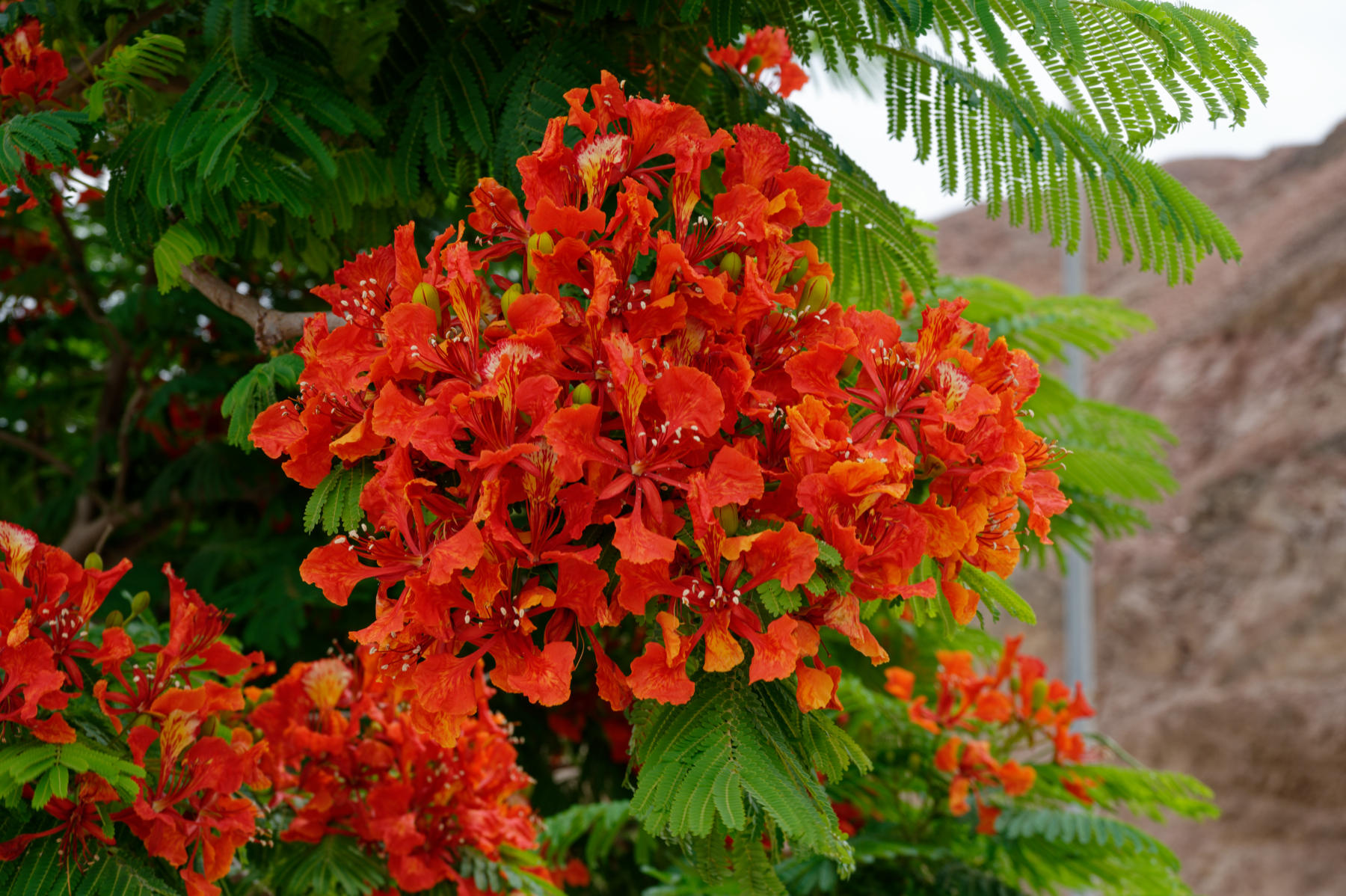 Jane looked it up and confirmed her theory that it is called a “Flamboyant Tree”, for some reason or other.  We also noted an unfamiliar thing: 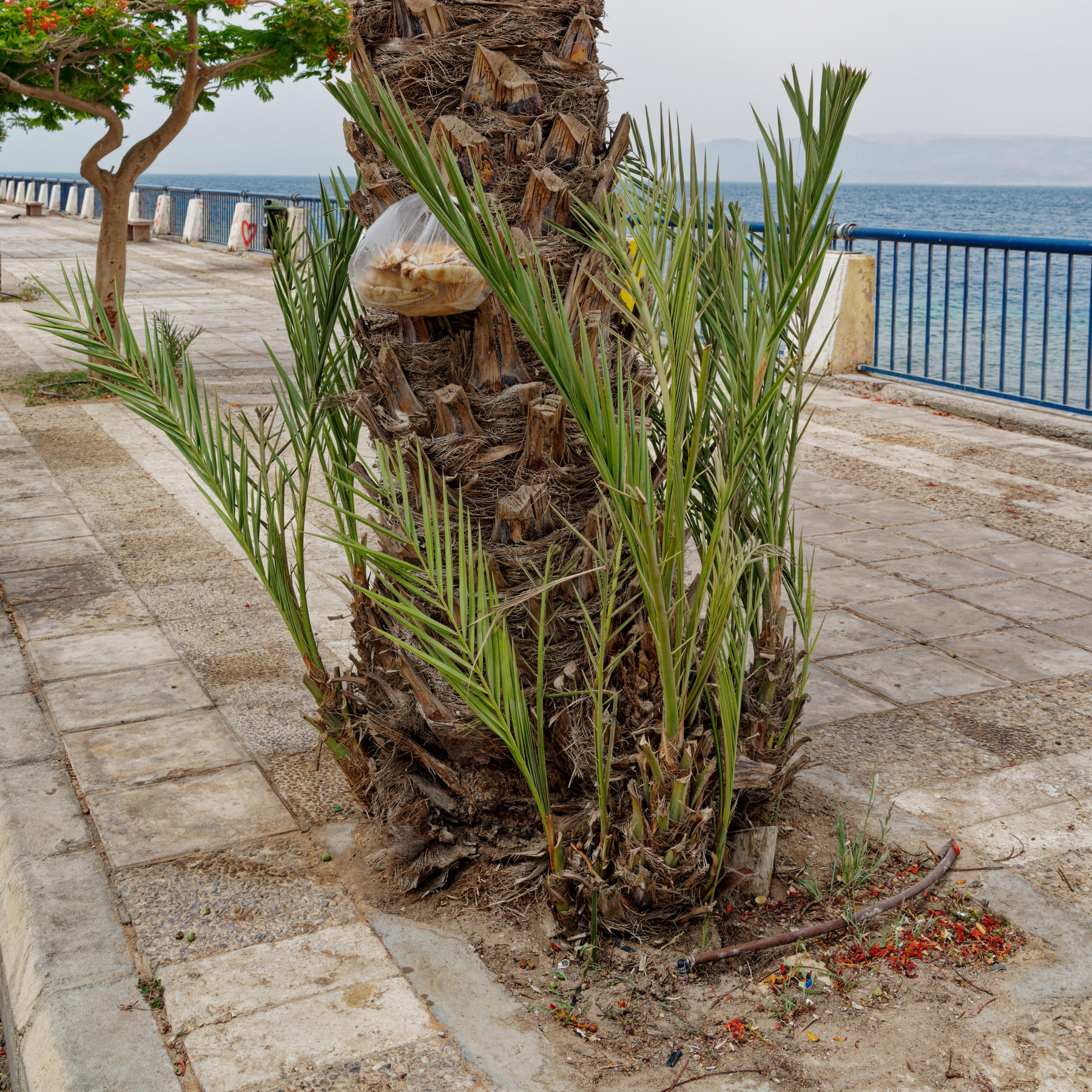 a bag of bread left hanging on a tree.  Saeed explained that people often hang their left-over bread like this for others to take if they need, for example to feed animals, which is rather lovely.

He then dropped us off some 16km further south, at the Mövenpick Tala Bay Resort, which is very substantial and very resortish. 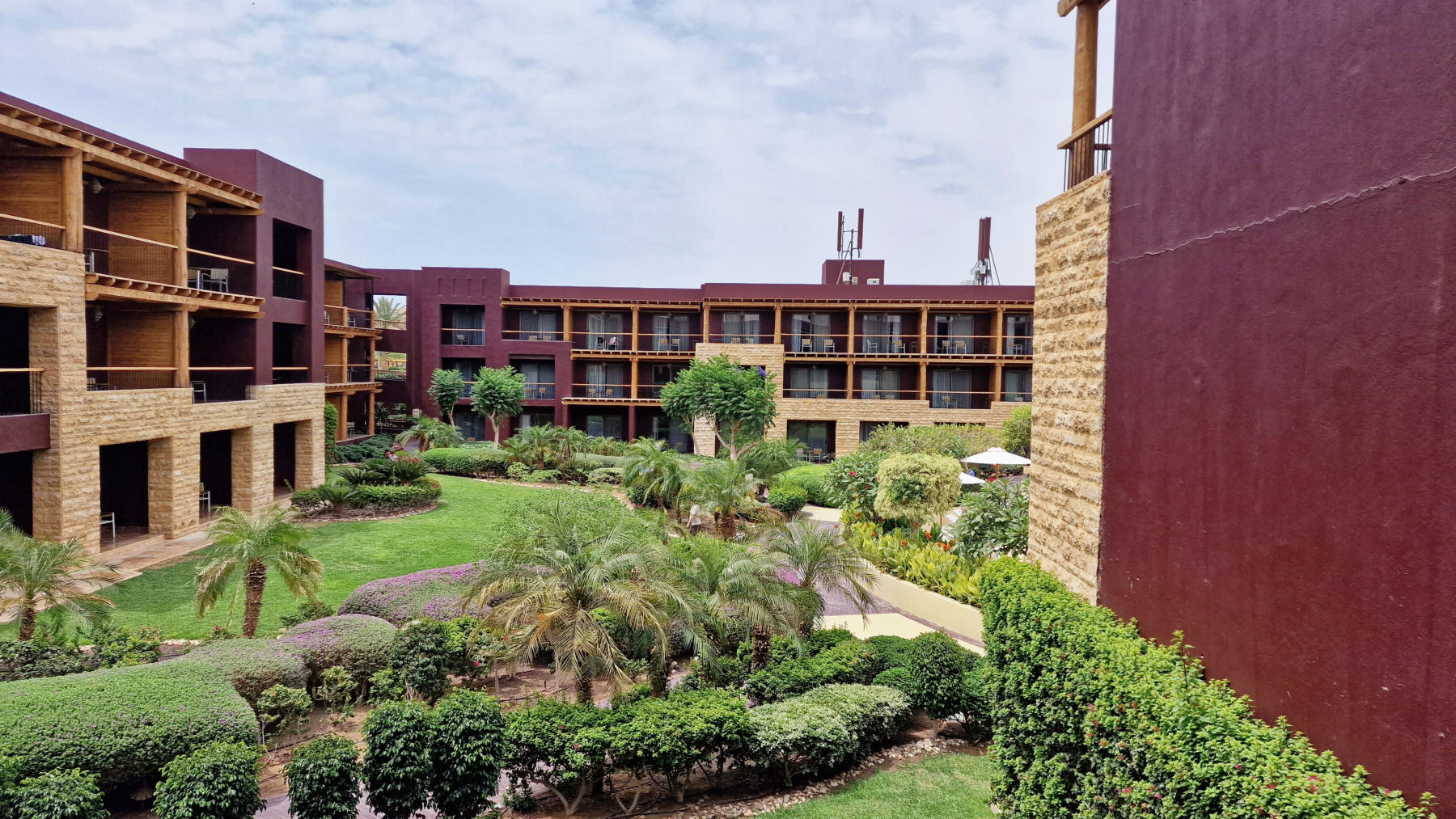 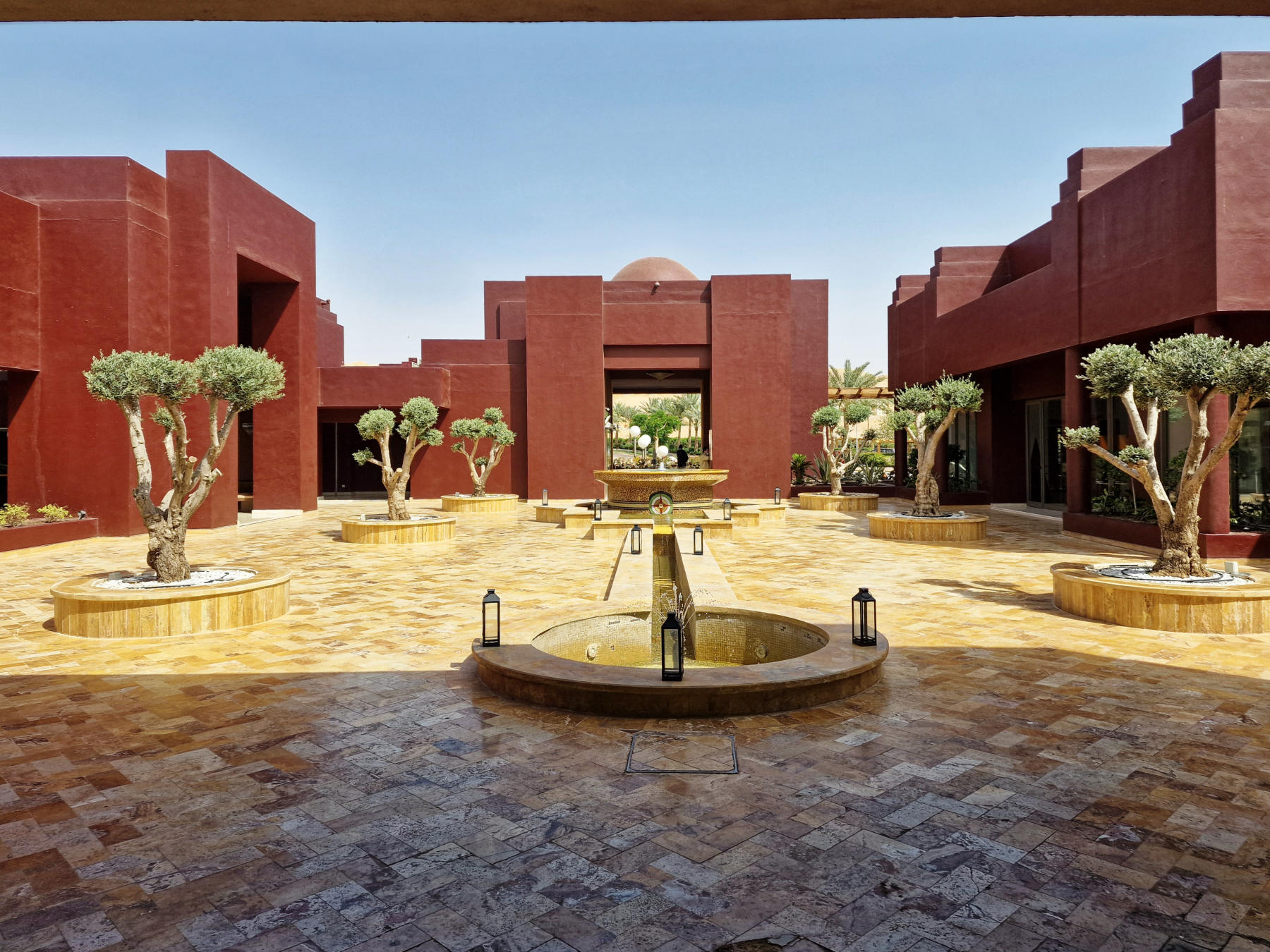 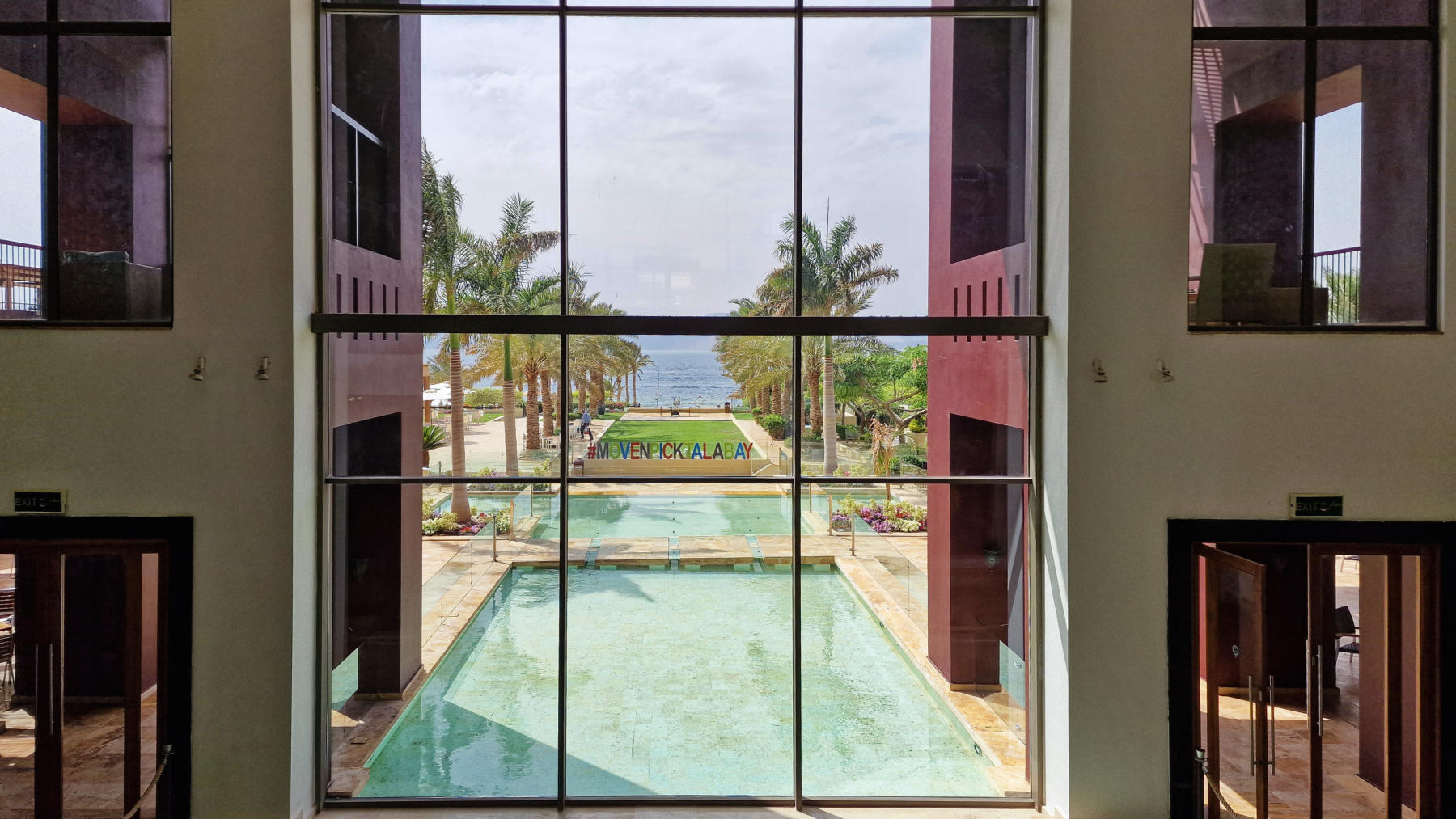 We checked in and had the luxury not only of having nothing to do, but also of knowing we had a relaxed morning the next day.  So we headed almost immediately for the lobby bar and had a welcome injection of gin before stumbling about until we found a restaurant for a late lunch – it really is quite a large place – the walk from reception to our room is (according to Garmin) 0.16 miles – and we found it a bit confusing trying to locate the best route from A (where we were) to B (where lunch would be).  But we managed it because we’re triers and had another welcome injection of western food – steak and chips in my case.  I like Jordanian food and have enjoyed eating here.  But – steak and chips, you know?

The rest of yesterday was spent bringing this blog not quite up to date and we got a reasonably early night with, as I say, the comfort that comes from not having an alarm set for the morning.

A small diversion: please excuse the schoolboy ignorance in me that caused me an inward snigger when I  saw this at the breakfast buffet. 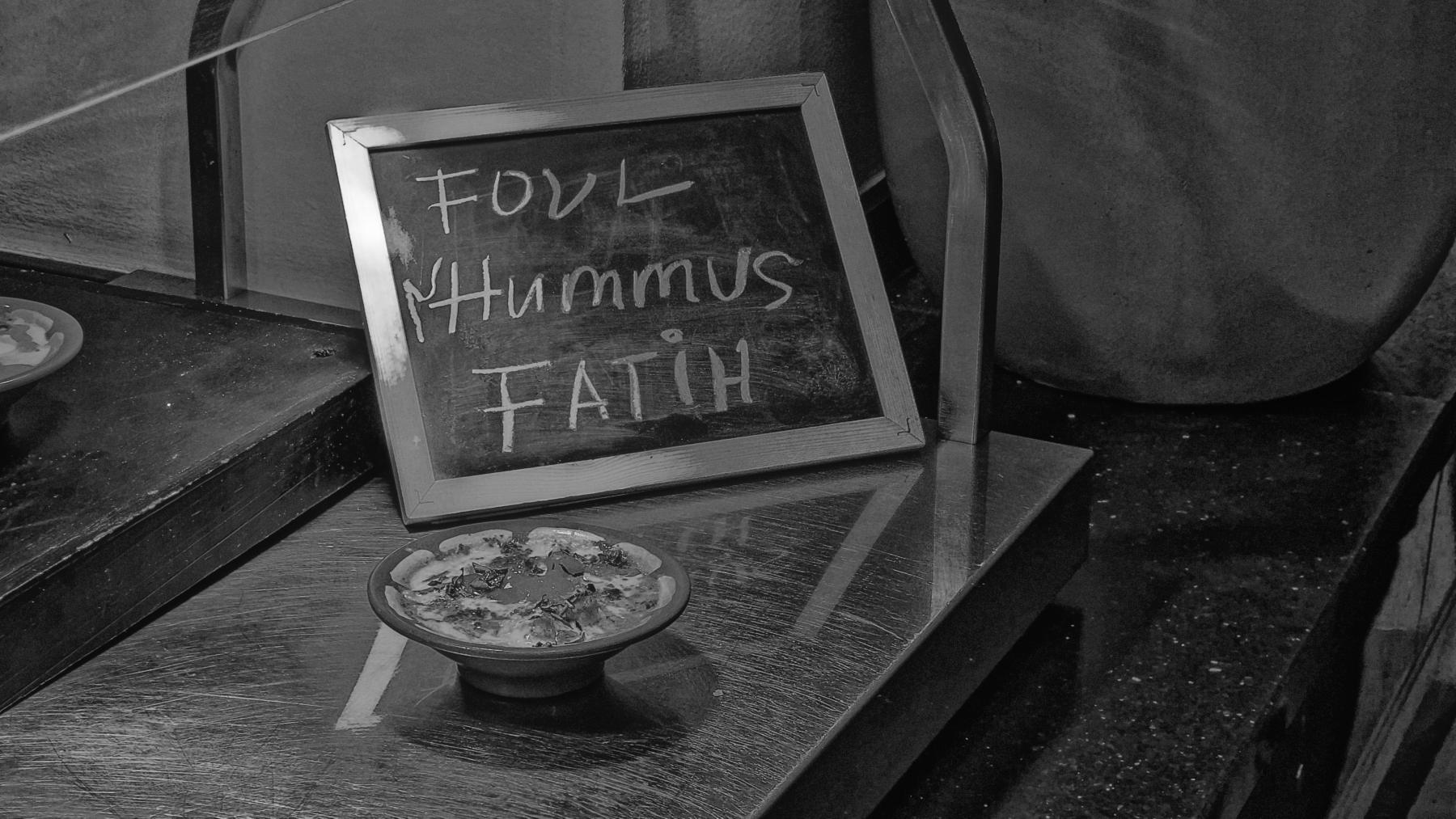 Today’s activity, agreed with Saeed on the way down from Wadi Rum, was a trip out on the Red Sea on a glass-bottomed boat to look at the coral for which the sea is renowned. Saeed has a friend with a boat.  Who’d have guessed, eh? So he took us to the harbour, just by the fish market, 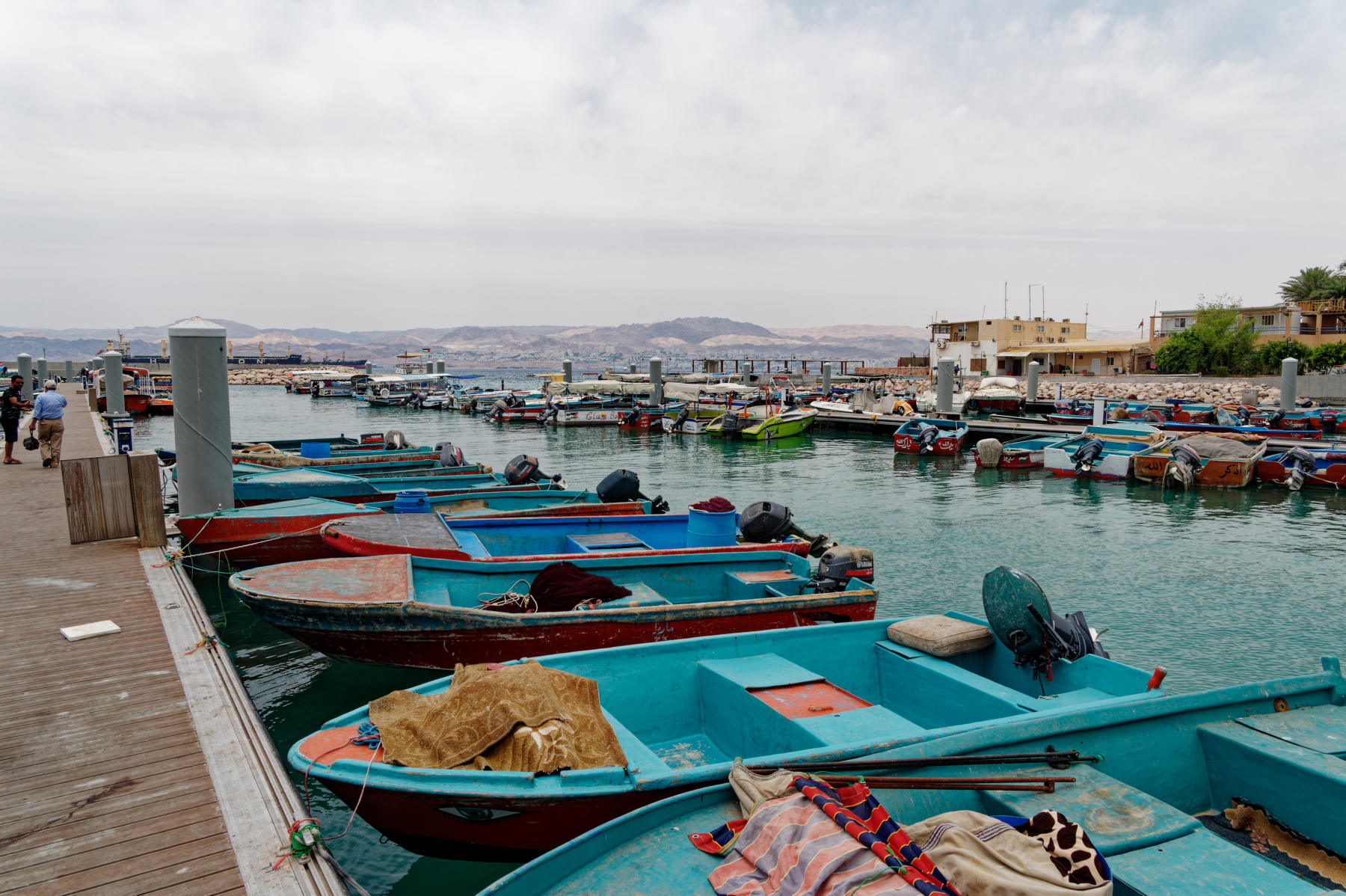 where it became clear that glass-bottomed boat trips are definitely A Thing in Aqaba. 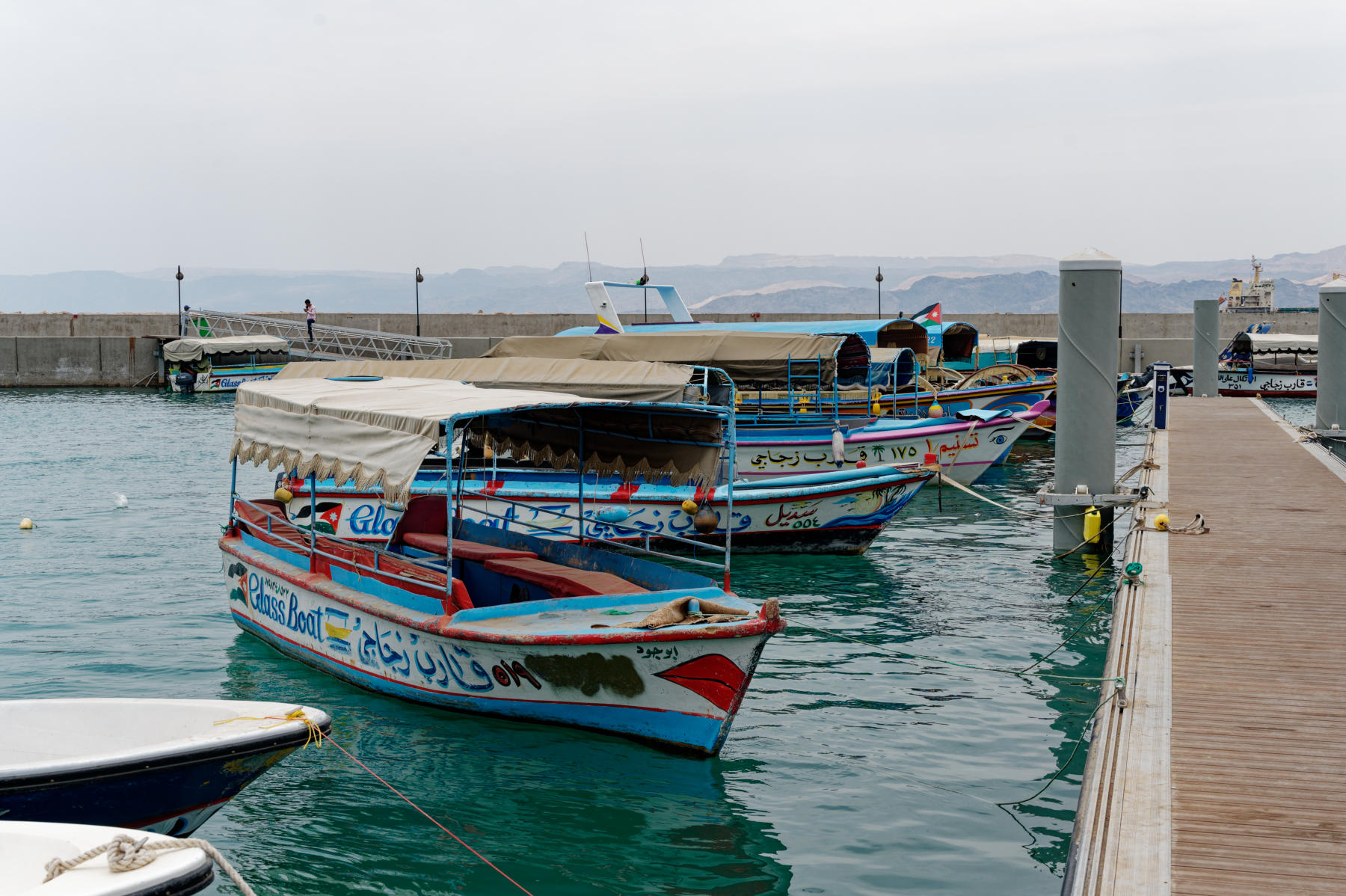 We met Omar and his boat 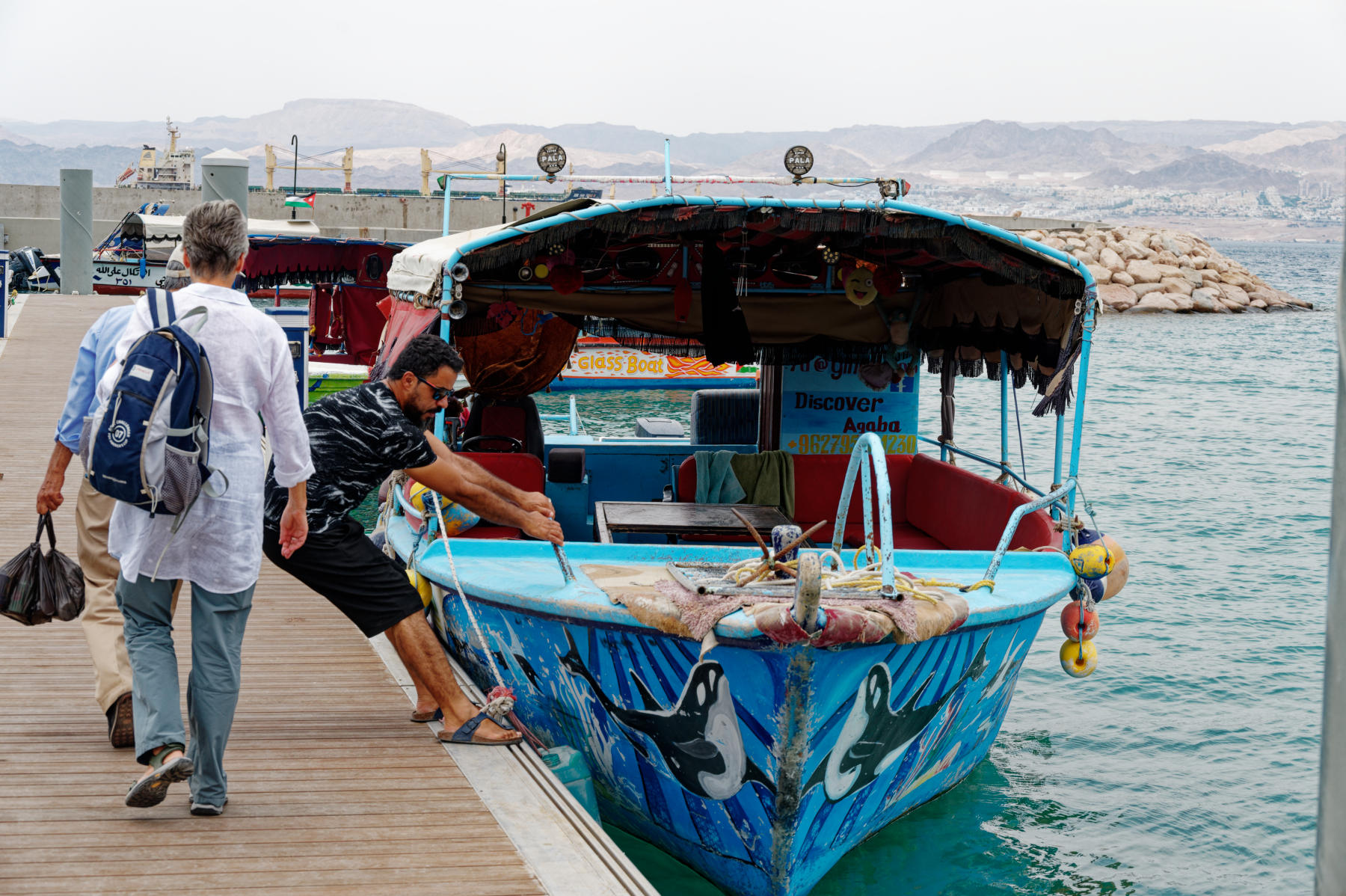 and headed out at a gentle pace, consistent with not tearing the glass bottom out of the boat which would have been regrettable. There is plenty of coral growing naturally along the coast here, but The Powers That Be have undertaken a rather unusual initiative to give the coral extra places to grow.  Because it grows well on steel, they have dumped various objects – ships, old military tanks, that kind of thing, so that coral can grow on them and also in some cases as targets for divers to visit (Aqaba is also a big diving centre on account of it being rather nearer the sea that almost anywhere else in Jordan).  So he headed out to the first one and told us to grab our cameras.  At this point, it became clear that all was not clear. 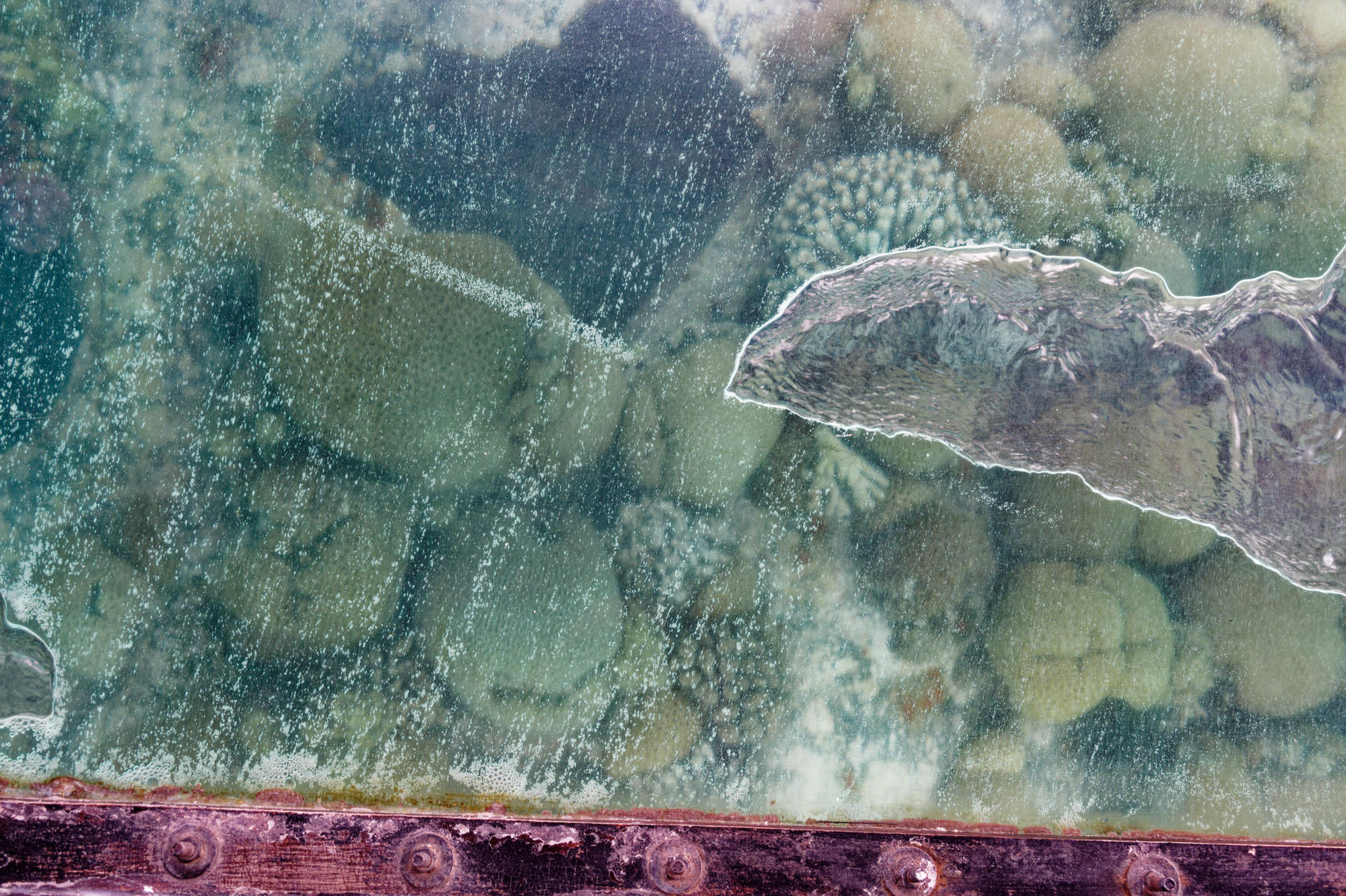 It was very difficult to take decent photos with my Nikon through the glass on the bottom of the boat. 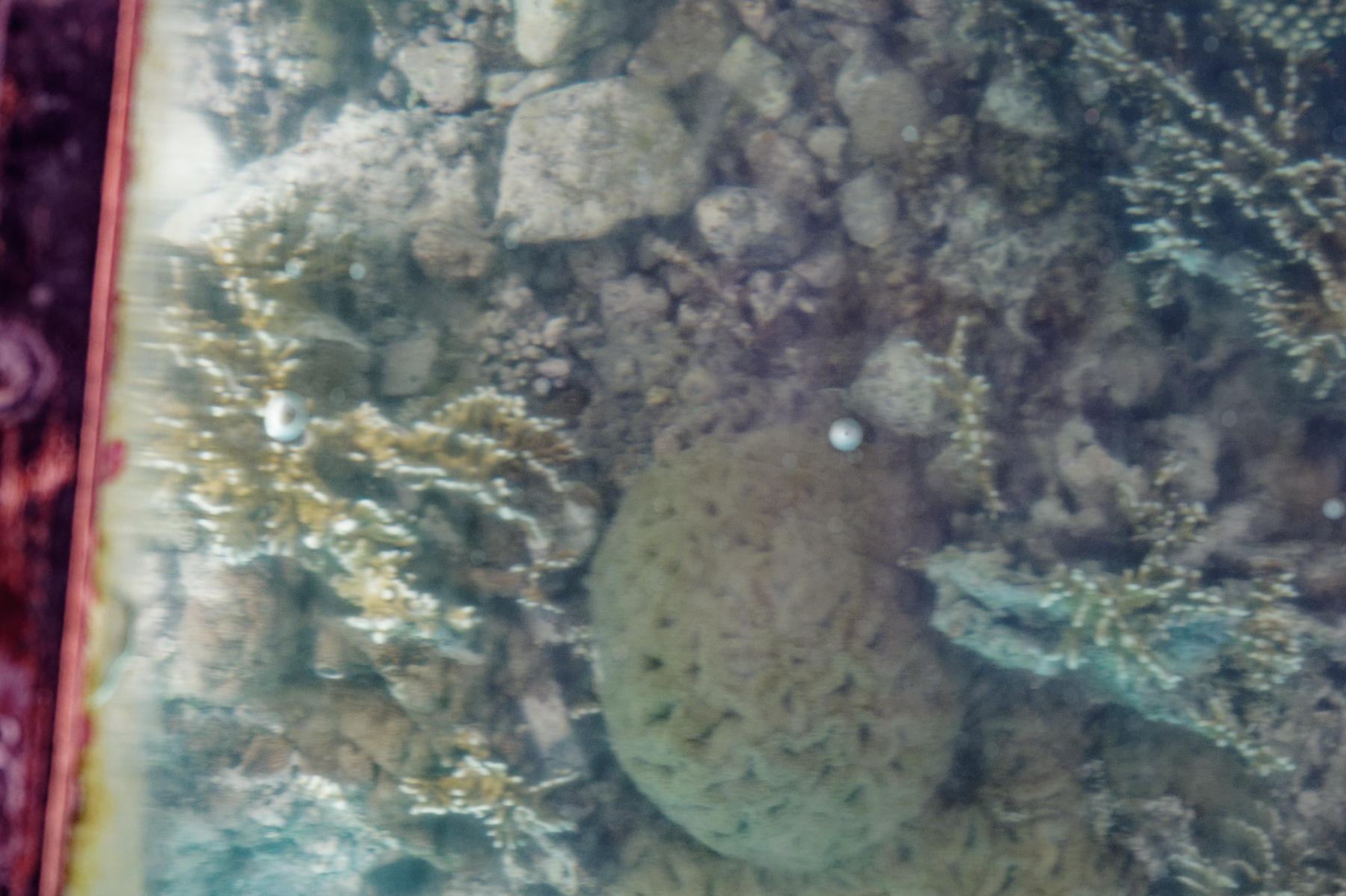 In fact, it was easier to get an idea of the ship and its coral by, erm, looking over the side. 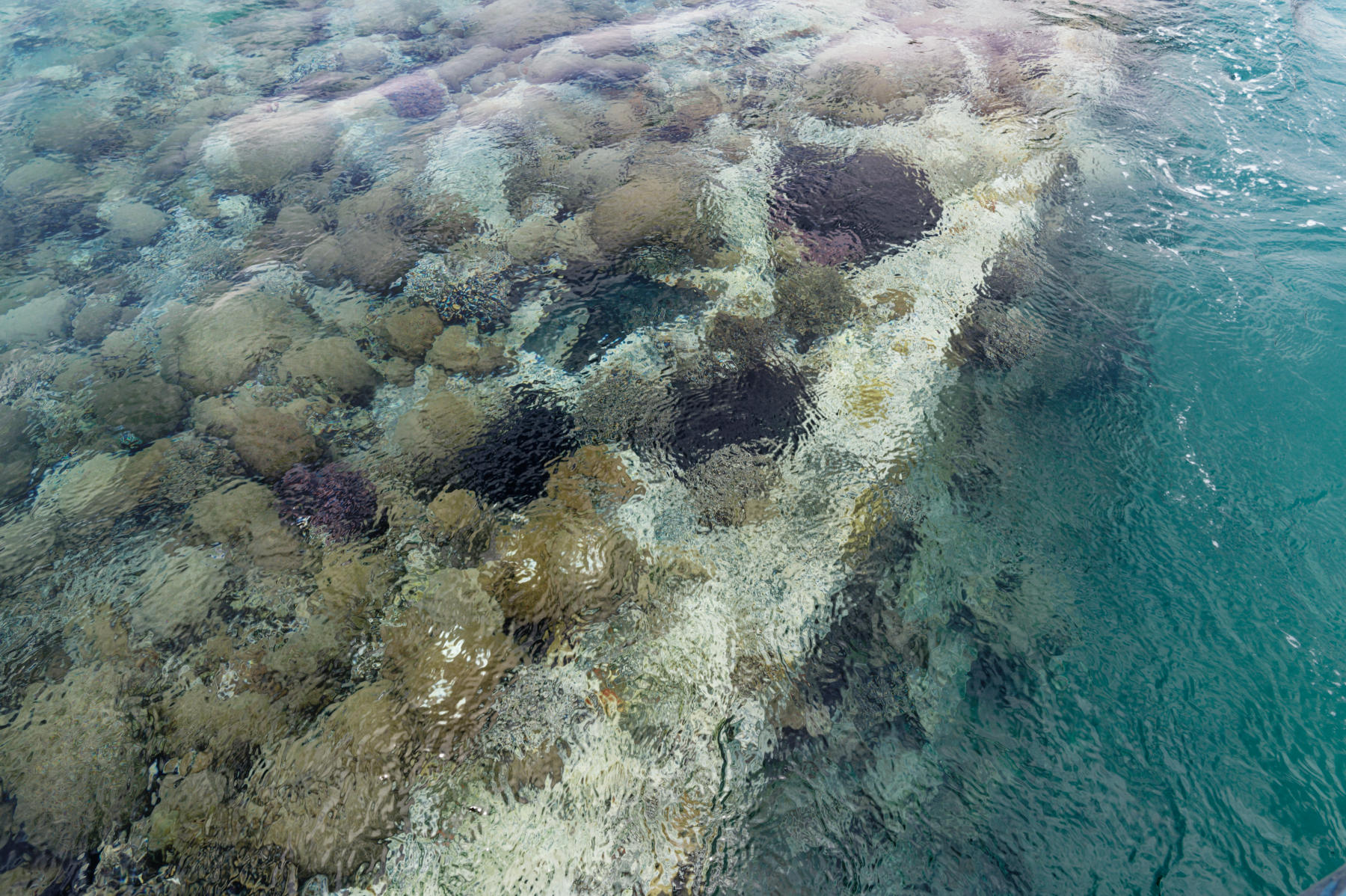 When we got to some coastal coral a bit further on, I tried also using my mobile phone, and this was the best I could do 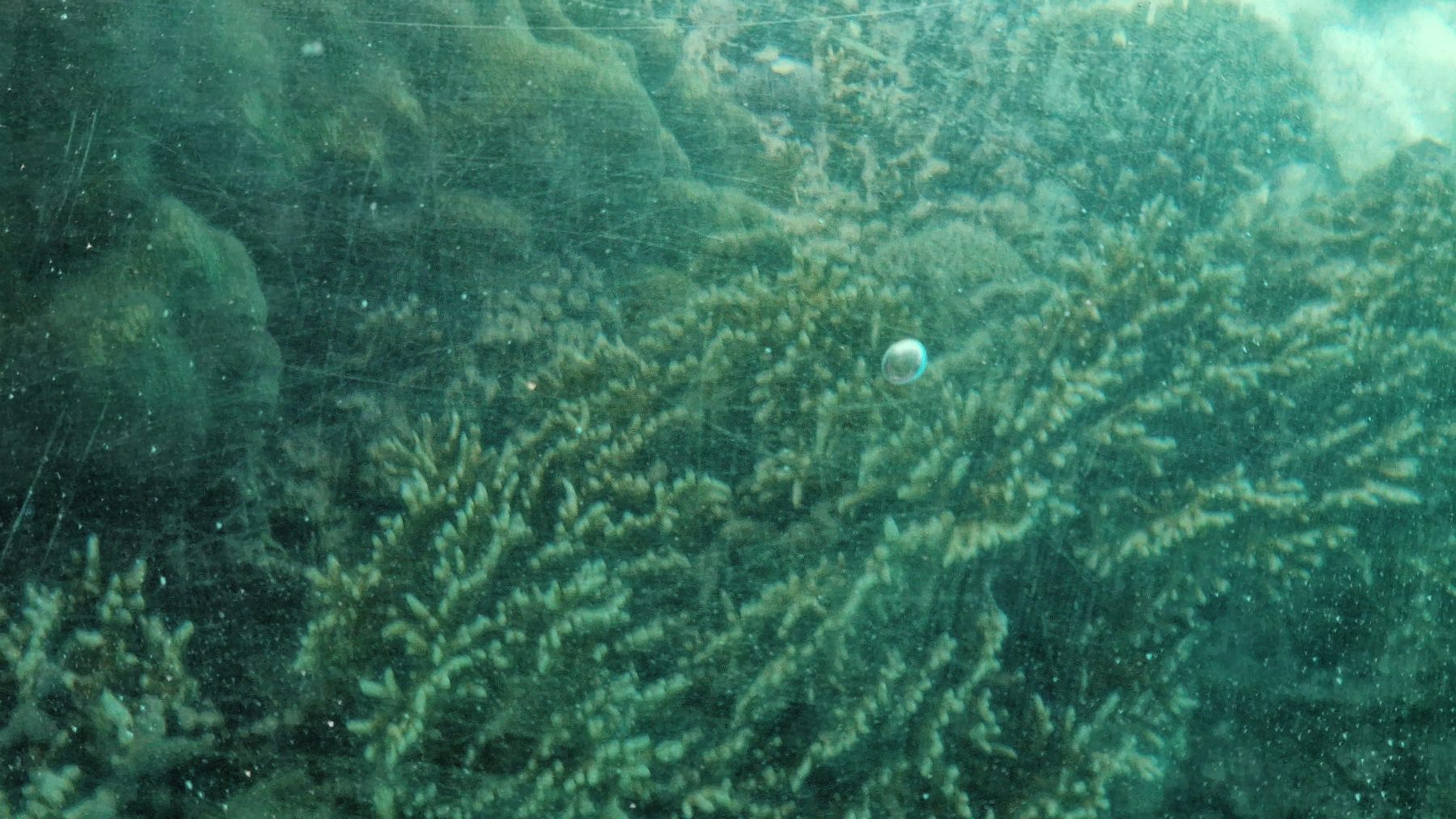 so I tried some video which at least gives an impression, even if the quality is, frankly, poor.

We had lunch on the boat – Omar had brought fish and chips (Jordan style) for us all with him, and the fish was sea bass, which was delicious.  After that we headed back to Aqaba and I took one or two more snaps on the way: 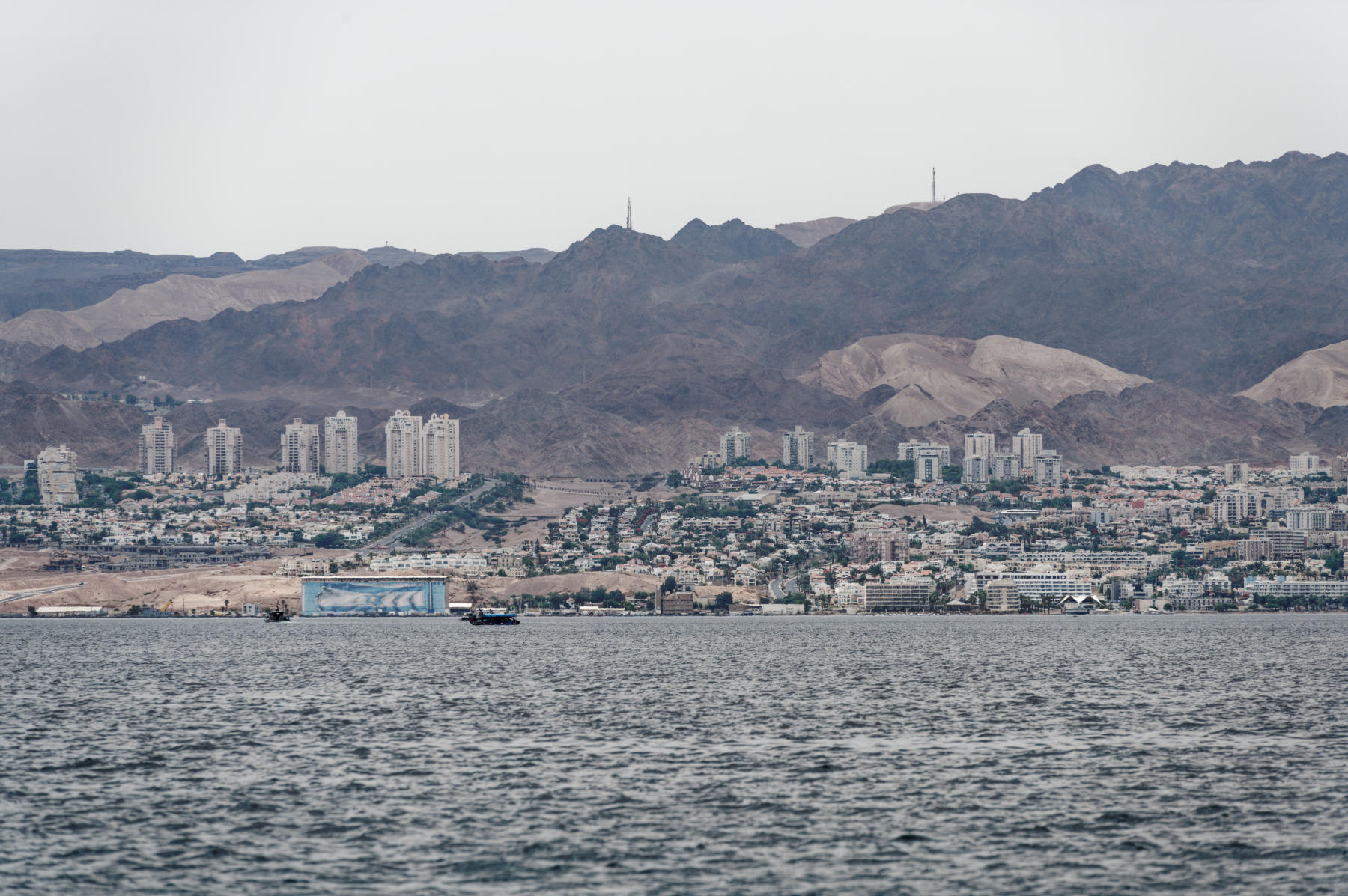 this, for example, is Eilat, on the opposite shore of the finger of the Red Sea that reaches up to Aqaba.  To me and Google Maps, Eilat is in Israel, but Saeed and Omar described it as being in Palestine.  I offer no further comment, mainly because the sensitivities and complexities are beyond my ken.  From Aqaba, not only can you see Eilat, but you can see into Egypt on that side of the finger (marked by the big Hotel Taba); and the border into Saudi Arabia is only 25km south of the city.  This proximity to many nations has a great bearing on Jordan’s culture, as I’ve mentioned before.

Having had only Lipton’s Ice Tea as refreshment with lunch, we found the siren call of the lobby bar irresistible, and treated ourselves to a couple of drinks before heading back to our room.  There was one final point of interest en route – the Mövenpick Chocolate Hour, which was an opportunity to grab a couple of treats to have with the cup of tea that I am drinking as I type this. But because they were free, we could be reassured that they contained no calories at all. No, really. 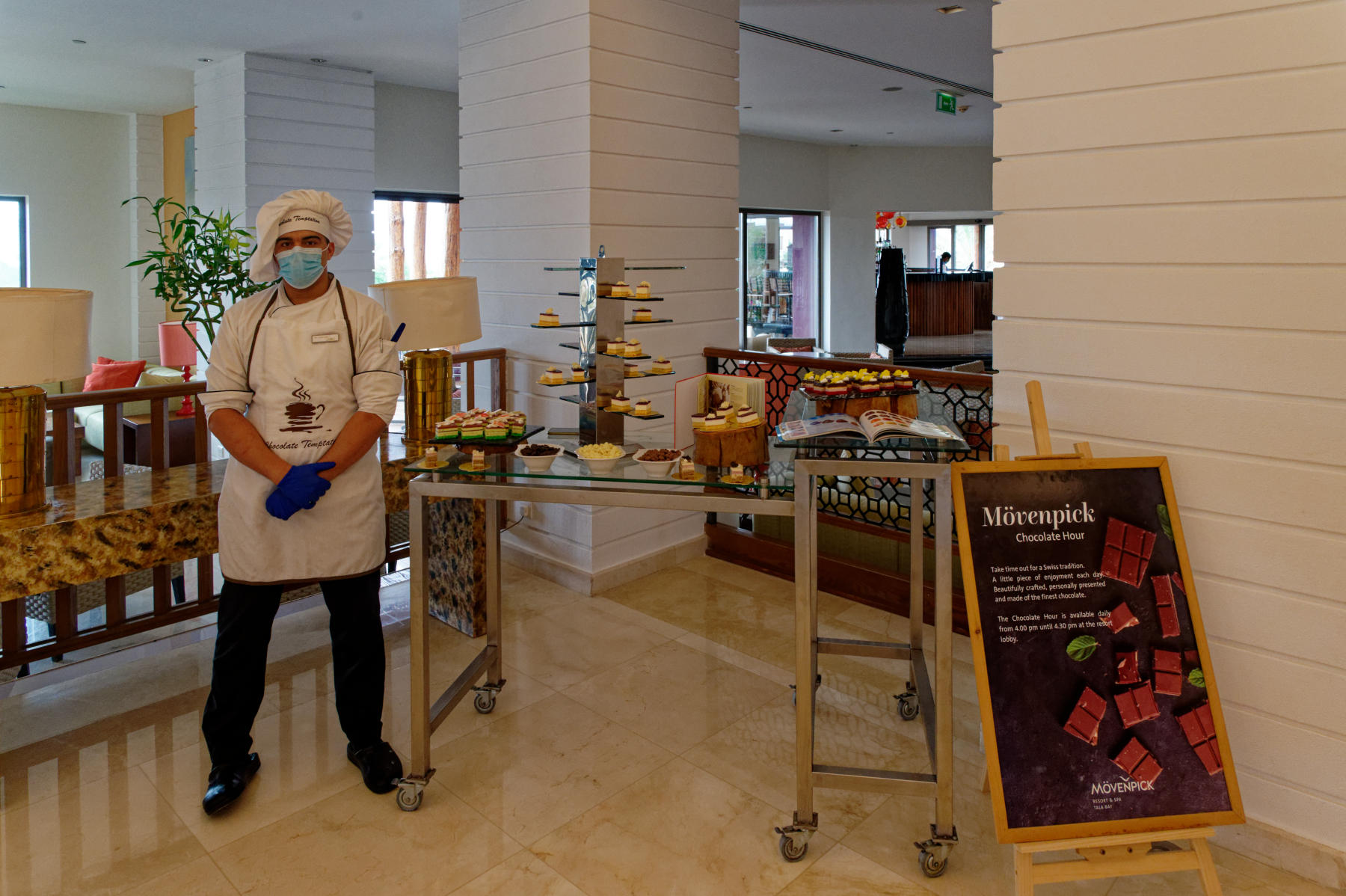 And that’s about it for Aqaba, and the blog is up to date.  We have another relaxed start tomorrow (yay!) as we depart at 10 for our next adventure which will take place in the Dana Nature Reserve, about three hours northish of here. It’s supposed to be really great for hiking in, which is good news, since our itinerary specifies that we will undertake a hike there. We know that, like Wadi Rum, there will be no booze served with our meals over the next couple of days. What I’m not sure of is the amount of internet there is, so you may well find yourself having another short respite from my deathless prose. It’s Sunday now and I will definitely be back online on Wednesday; I hope you’ll join me then.