Saturday 2 October 2021 – We’ve been home for a couple of days, so now that we’ve caught up with the unpacking, washing and ironing, and are starting once more to get used to the rhythms of life at home – which don’t sadly, involve drinking gin every day – I thought I’d reflect on our final day in Menorca, the journey home and any other rambling that occurs to me.

We were due to be taken to the airport by taxi at 1345, which gave us the morning to fill. Although we’d seen pretty much all that Ciutadella had to offer the tourist, it’s such an attractive city that we went wandering round anyway.  This was last Thursday, 30th September; when we visited Menorca previously in 2019, October 1 was the date when all the bus services beyond the main route connecting the large towns was suspended, as this was officially Out Of Season.  So it was interesting to note, as we walked around in the harbour, that some of the restaurant umbrellas were being jetwashed. 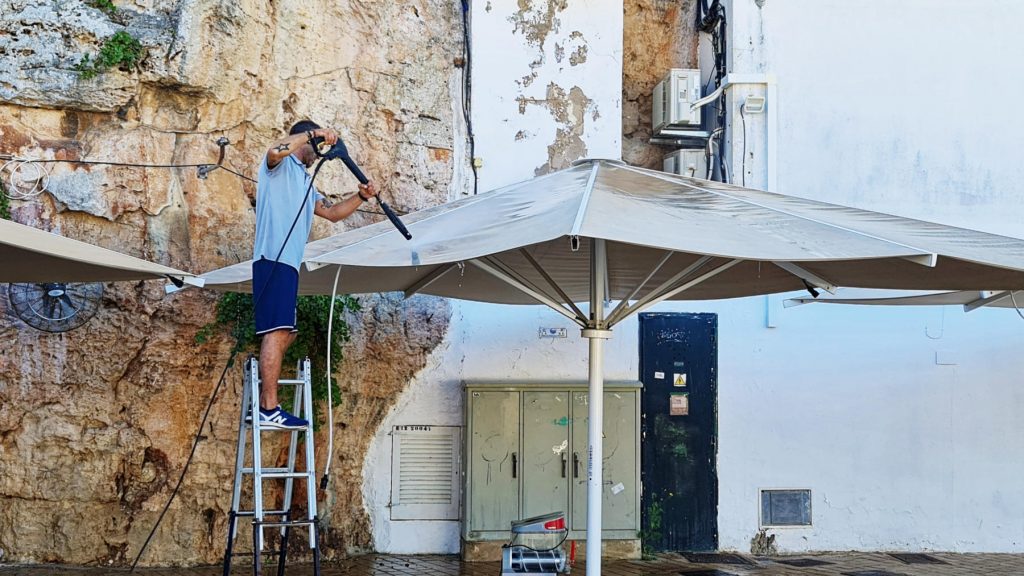 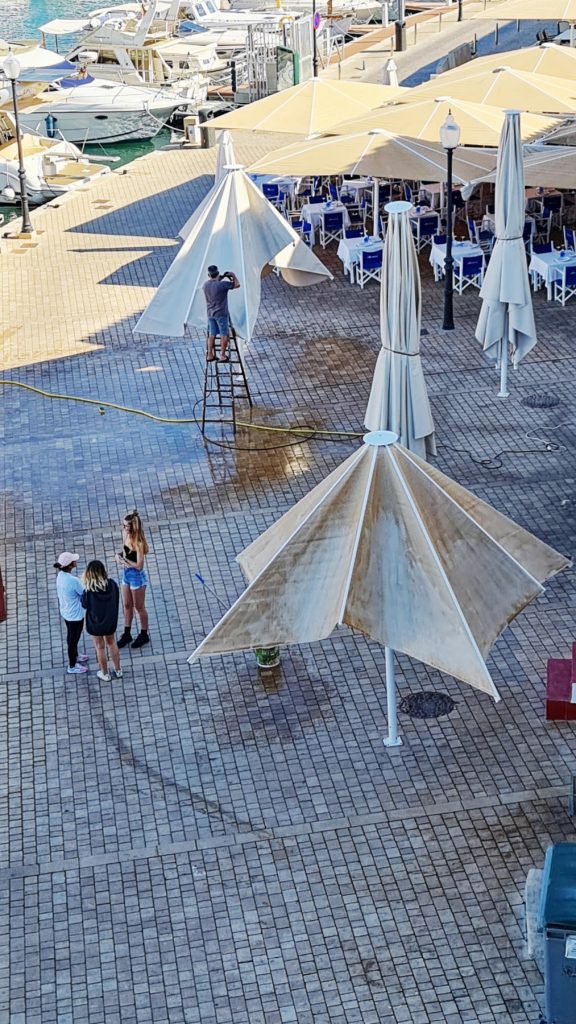 Now, it may be that this is a standard practice for a Thursday, in preparation for the weekend; or it may be that this was an end-of-season activity, preparing to put things away for the winter. We don’t rightly know, but it had a slightly sad valedictory feel to it, somehow.

We carried on wandering around, noting a couple of other quirky artworks. 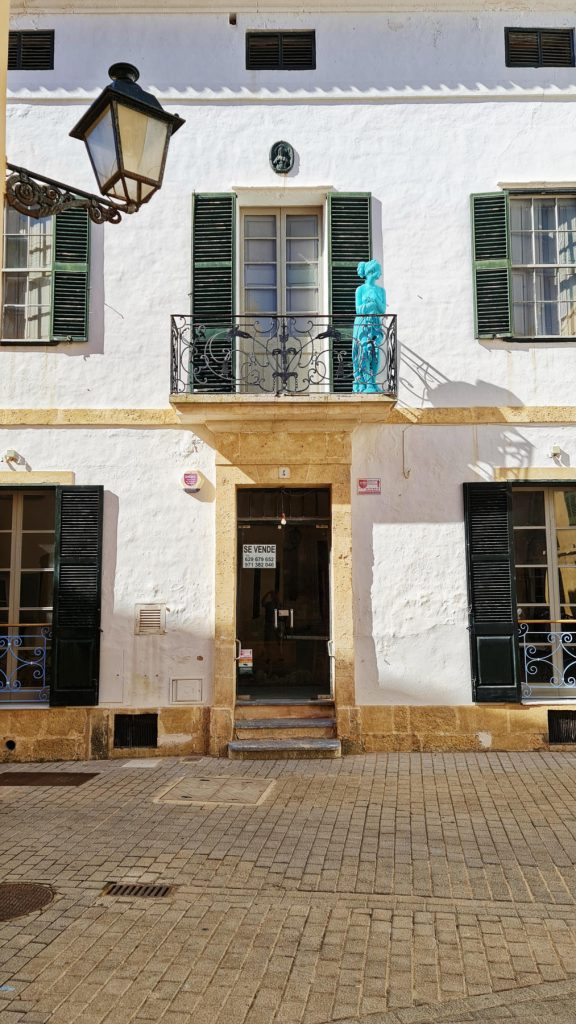 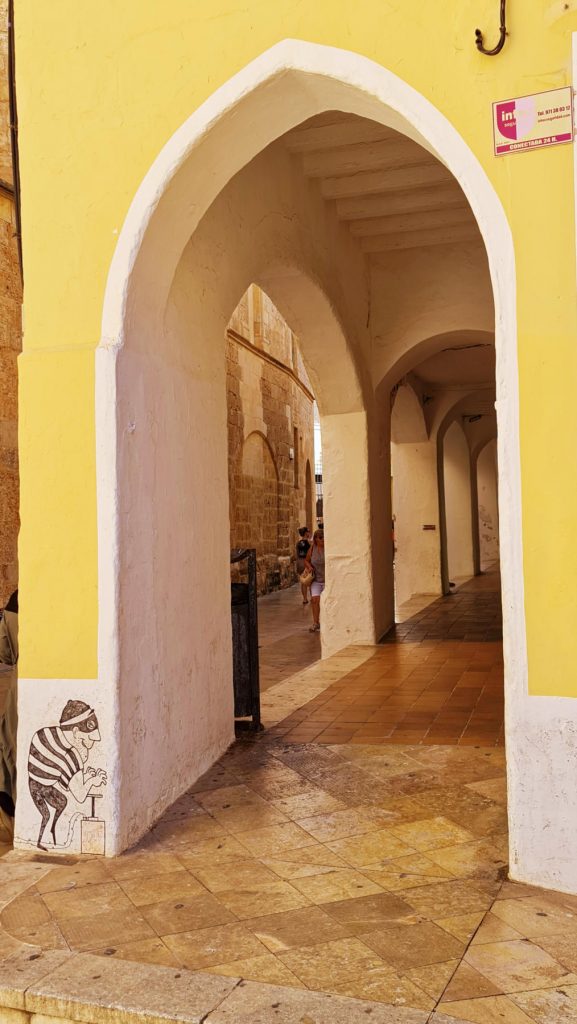 (The chap with the plunger was connected to a drawing of a pile of TNT.) We’d bought a couple of bottles of the local gin to take home with us, because we know that, unlike much booze that is consumed on holiday in The Foreign, Xoriguer gin travels well.  So we complemented it with a purchase of some sobrasada, the local sausage meat which figures prominently in Balearic recipes, particularly tapas. Let’s see if that travels as well, eh?

After a final farewell coffee in Es Pou, it was time to get back to the hotel and await the cab to the airport.  From there on, the travels went perfectly smoothly, with the minimum of time wasted standing in a queue waiting for the check-in desk to open.  The flight was on time – well done, EasyJet – perfect punctuality for both outward and return journeys and a perfect amount of gin and junk food available for purchase on board – and the UK passport gates seemed to be talking to the other Covid systems so we wafted through the border with no queue at all and without having to show any paperwork beyond our passports.  My bag was number 19 on the conveyor, with Jane’s not too far behind, the taxi was not only awaiting us but had enough fuel to get us home, and so we entered our front door some 80 minutes after the plane touched down, which was nice.  The 15°C temperature and the steady rain was less so, but it was still good to get home and find it still standing.  No-one had raided our cars for fuel, either, which was comforting.

The only fly in the ointment was our Day 2 Covid test back in the UK.  We’d booked it and DPD were supposed to deliver it, but failed because their driver (who I’m pretty sure has delivered to us before) got us confused with the nursing home at the end of our track.   The UK government web pages don’t specify what you’re supposed to do if the test delivery is cocked up. And anyway the rules change on Monday.  We’ve both taken Lateral Flow tests (negative) and have a full audit trail of the efforts we’ve been to to get a test delivered in a timely fashion, and I have no idea whether The Men From The Ministry will follow up in any way.  We’ll just do the PCR tests assuming that DPD don’t cock up again on Monday, but it was very frustrating.

So, here we are, back home, and here I am on a rainy Saturday in Surrey, with the temperature at 13°C outside, thinking final thoughts about a memorable 18 days.

Here’s a map of where we actually walked. The various colours are assigned by Garmin depending on the speed we walked. 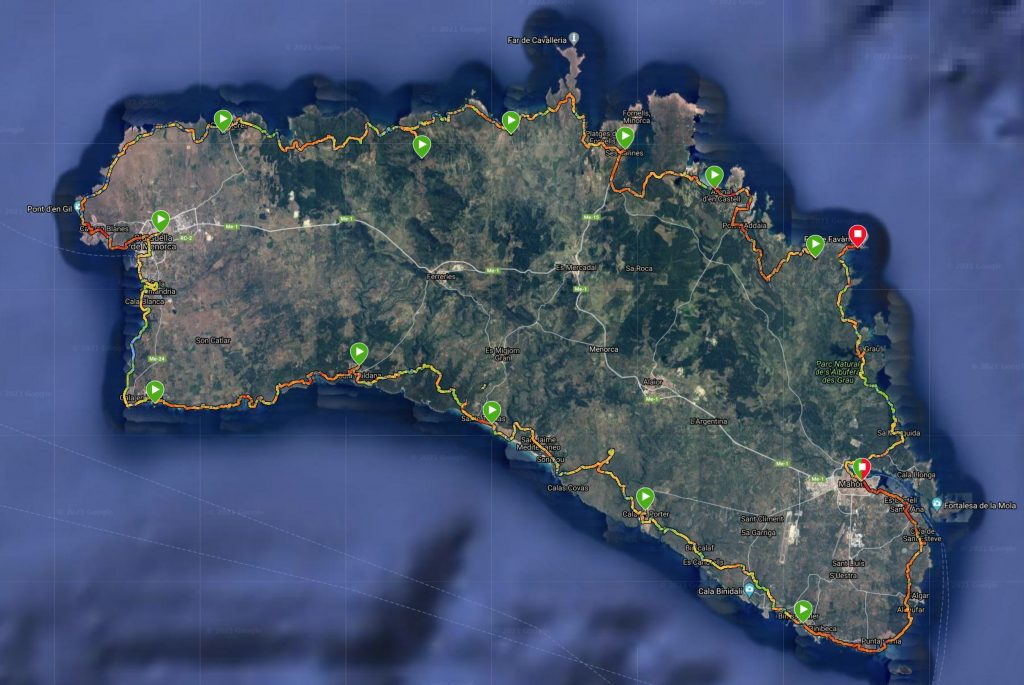 So there we are – another holiday over and another set of blog pages satisfactorily drafted.  I hope you’ve enjoyed reading them as much as I have had writing them.  There’s still a lot of uncertainty about international travel so our plans for future trips are still somewhat fluid.  But I plan to be back among these pages with more photos and commentary and I would be delighted to have your company whenever that happens.