Wednesday 7th July 2021. A fine day was promised by the weather man and (for Iceland) sizzling temperatures of perhaps as high as 21°C! Somewhat better than we would have had at home. Schadenfreude lives!

Our overall direction, which you might have guessed from the title, was east, crossing from the northeast region towards the east coast. Dagur started the day with a few stops local to Lake Myvatn, the lake which was overlooked from our hotel.  There are some nice scenes

particularly if you ignore the photographer’s shadow. 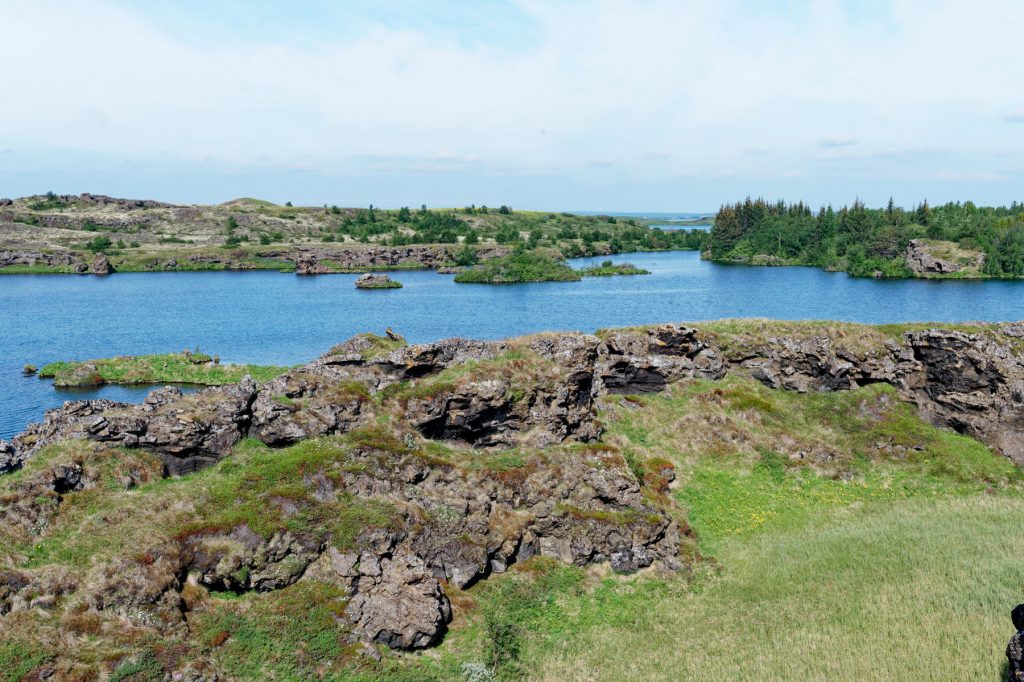 The next stop was at a slightly bizarre place called Dimmubogir, not to be confused with the Norwegian symphonic black metal band, of course.  This is a dramatic expanse of black lava 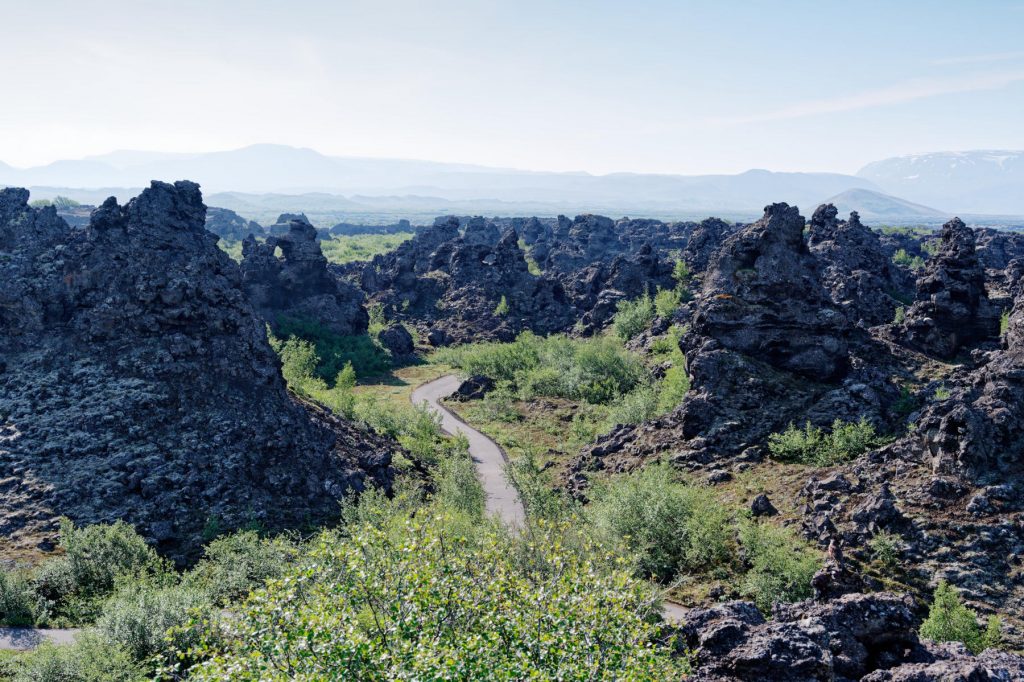 which was lightened somewhat by the voluble song of this little chap as we arrived. 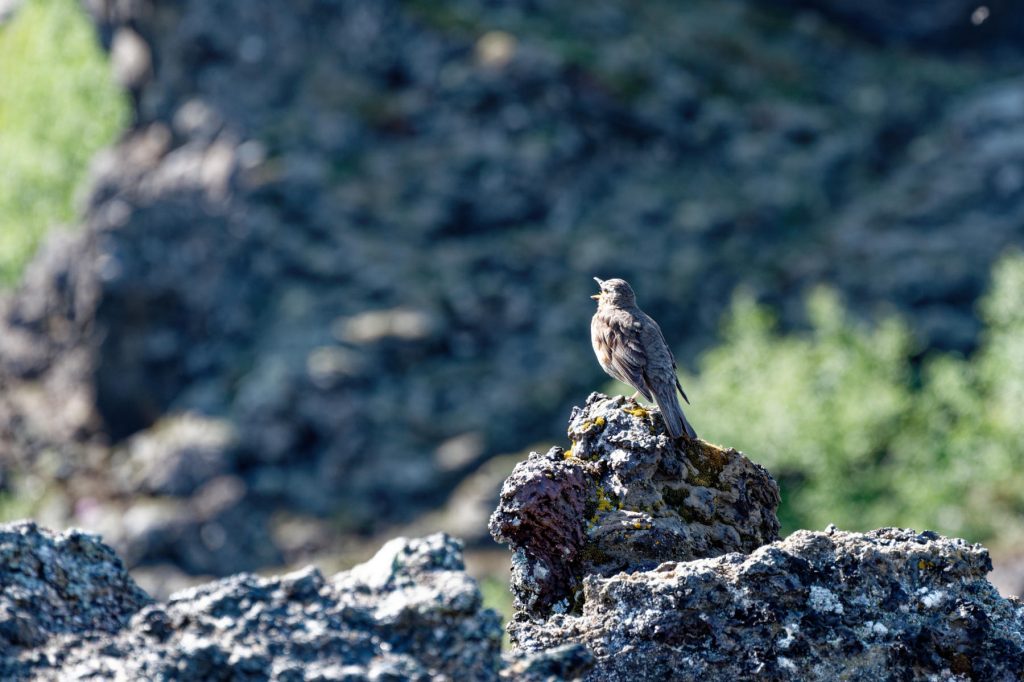 In folklore, Dimmuborgir is the home of the thirteen  ‘Icelandic Santa Clauses’ or Yule Lads. On the thirteen nights before Christmas, these trolls come one by one, not to deliver presents like in the softy UK, but to terrorise Icelanders, each with their own strategy after which they were named. It’s amazing what you can think up when the night lasts several months.

After that we visited a small geothermal pool in a lava cave, which was rather lovely. 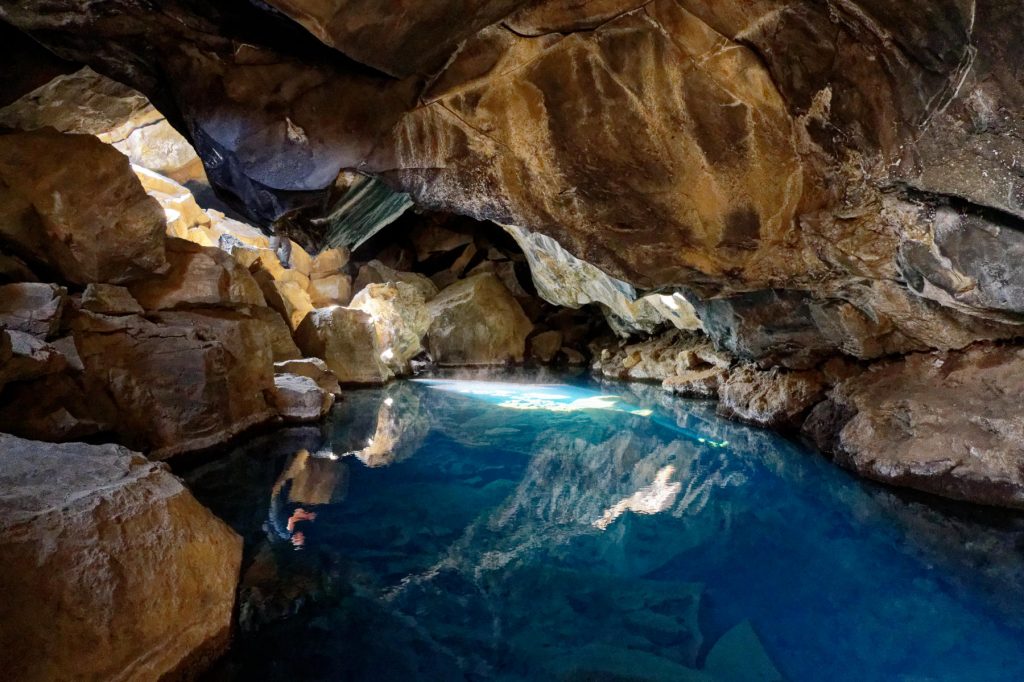 It’s called Grjótagjá and is so small that really only one or two people at a time can enter.  A sign outside forbids bathing, but as Game of Thrones fans will know, Jon Snow ignored this sign for a bit of how’s-your-father.  I’m told.

Following this, we set off into the region of Iceland called the Highlands. This is basically a wilderness. In the distance one can see Herðubreið, rated as Iceland’s most attractive mountain.  We never got close enough to form an opinion about this, really. 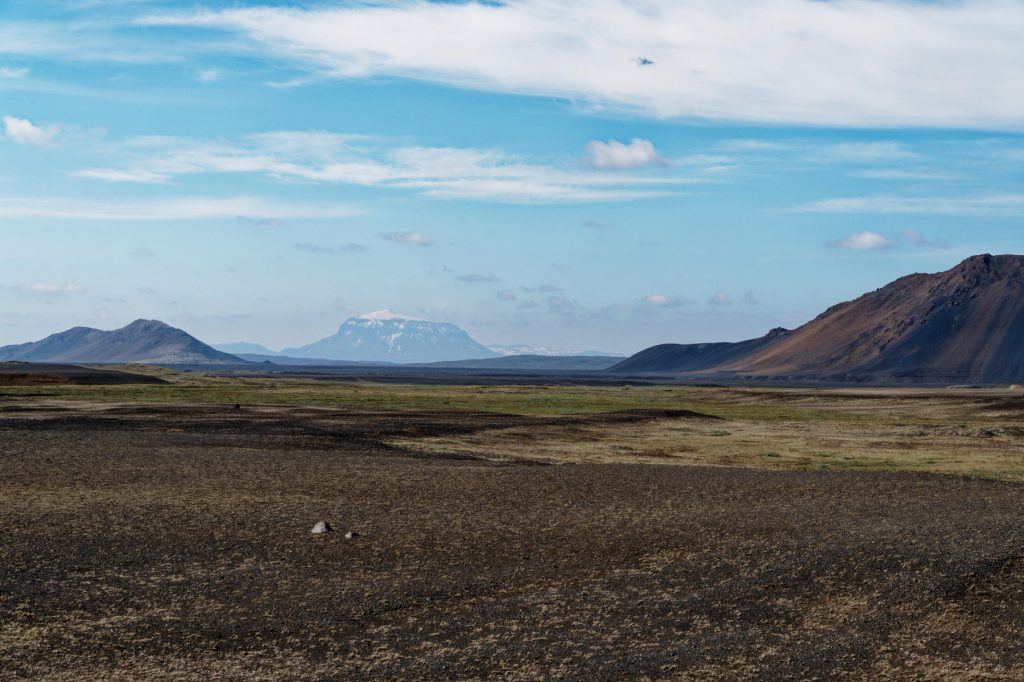 Above is part of a region which had full vegetation until the 16th century until this was largely wiped out by an eruption from Vatnajökull. Despite this attempts were made to (sheep) farm the land some 100 years ago, which made this the highest farm in Iceland.  However farming was abandoned here twenty years ago.  Generally speaking lava and farming are not happy companions.

Further on in this wilderness is another slightly bizarre place, based on a settlement on an original farm called Möðrudalur. A company called  Fjalladýrð set up a company and now operate a campground and set up some buildings in a sort of modern take on traditional Icelandic construction. 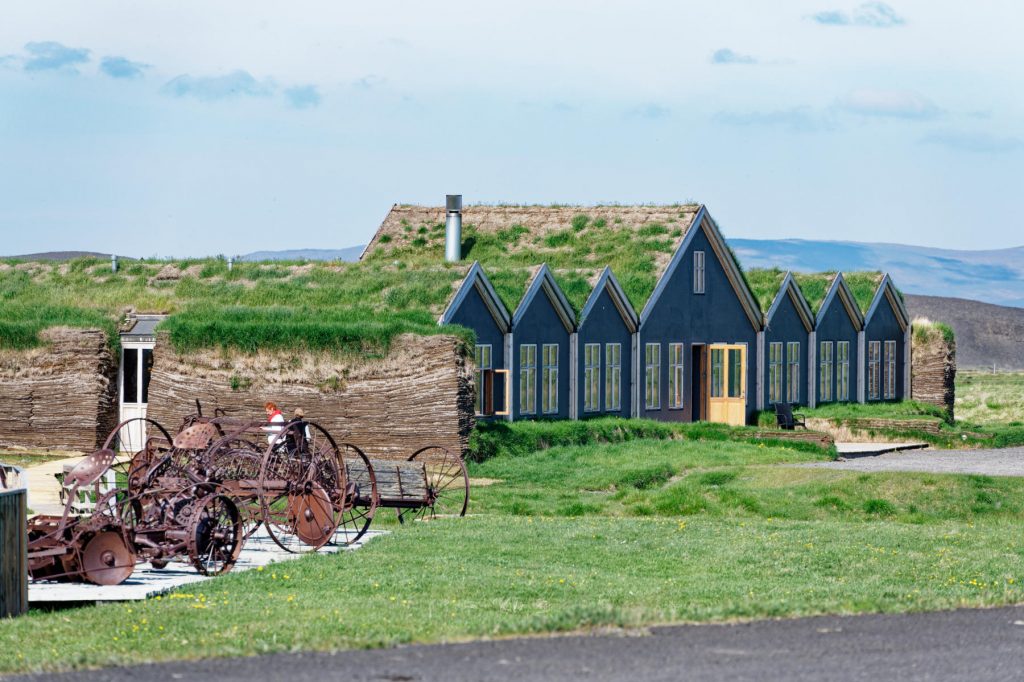 As well as camping facilities and this accommodation, the company operates 4×4 tours into the surrounding wilderness.  Somewhat specialised vehicles are needed. 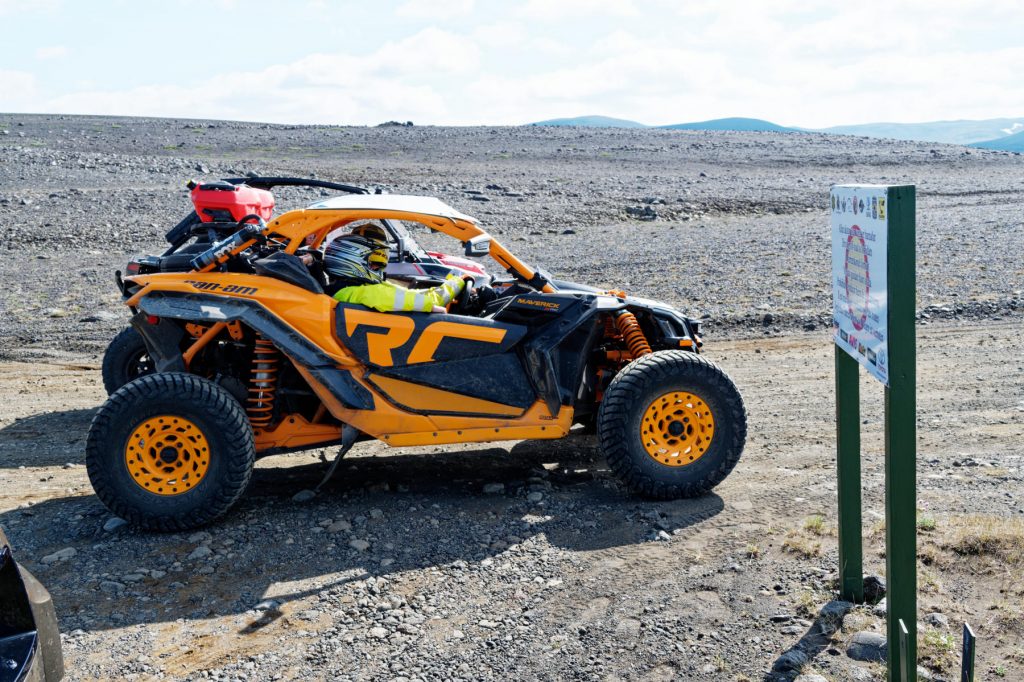 And there’s rather a neat little church nearby, too, which we added to our collection of neat little Icelandic churches. 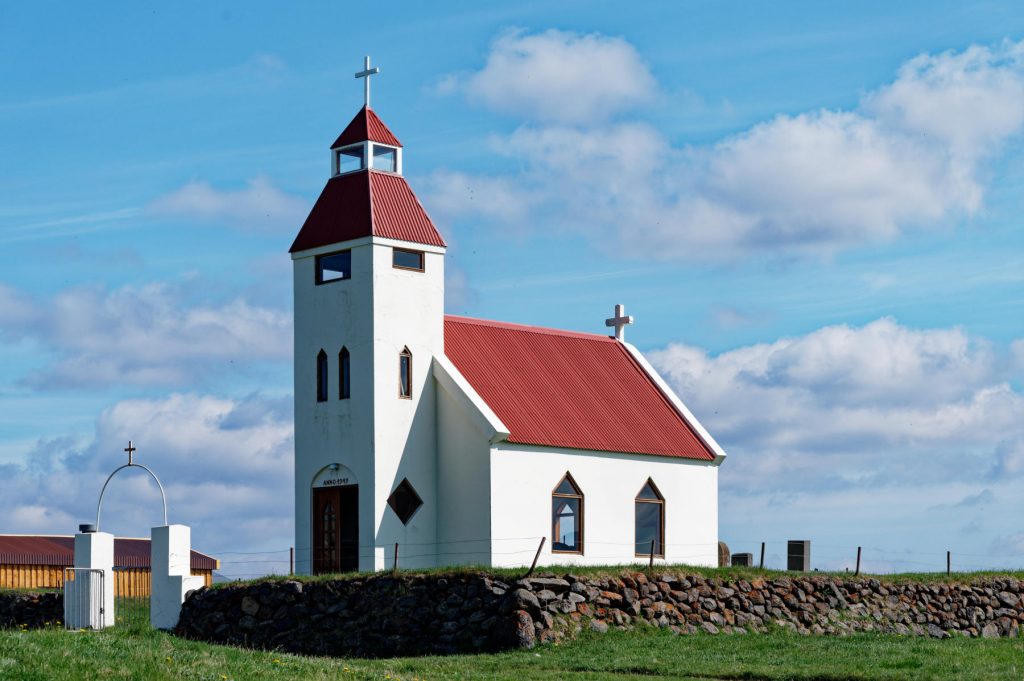 We carried on eastwards (rather than head into the Highlands proper, which requires serious preparation, vehicles and cojones) and stopped to admire yet another waterfall, this one called Rjúkandafoss.

The observant among you will by now be thinking “hold on – didn’t you rabbit on about this some days ago?”. And you would be right. But the Other Rjúkandafoss is a different Rjúkandafoss, you see, and is in the northwestern region, by Holmvik. But well done for paying attention.

Our journey took us into a town called Egilsstaðir, where we took lunch. Well, we paid for it, to be completely honest with you (and the restaurant). On the way in to town, I noticed a building which looked like yet another unusual church, and so we went in search of it after eating.  And it’s a remarkable building. 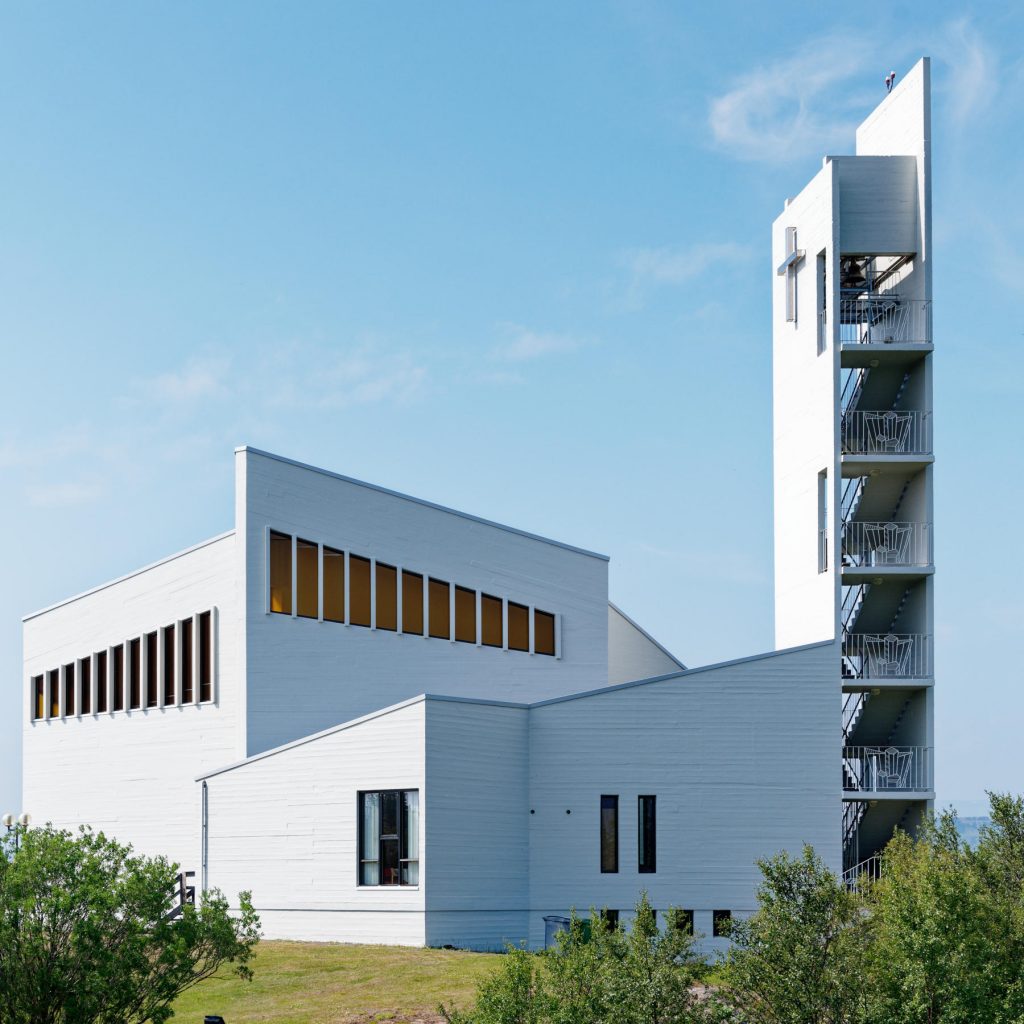 The next town on our itinerary was Seyðisfjörður, but our route took us past (yet) another waterfall, which actually had two parts, upper 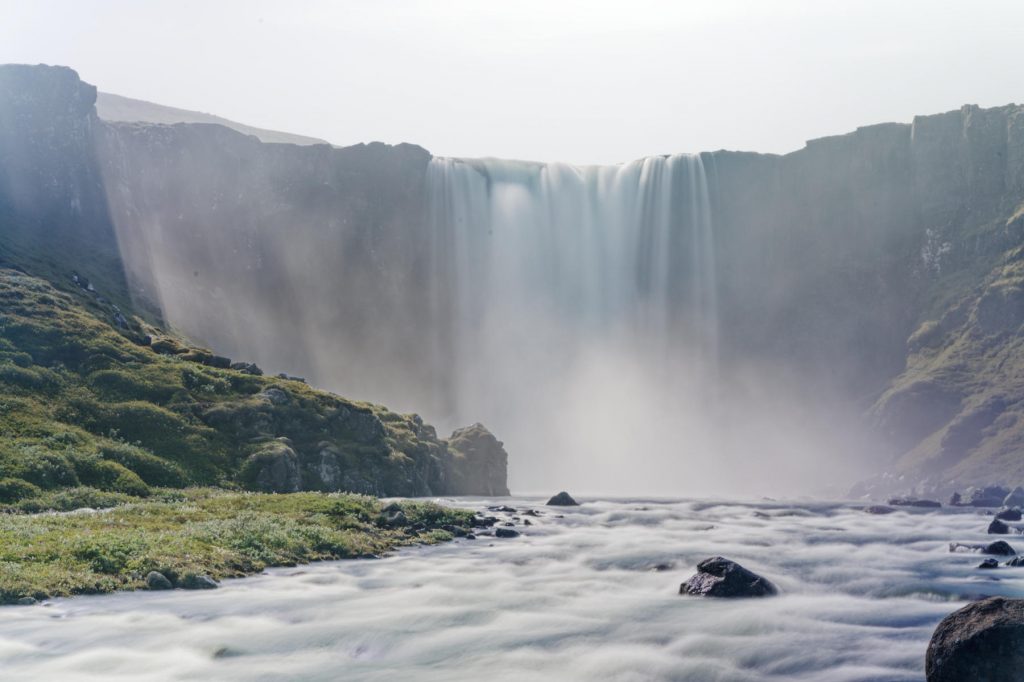 Seyðisfjörður styles itself as “the heart of culture, heritage and hospitality in East Iceland.” It’s certainly a pretty place with all sorts of colourful buildings 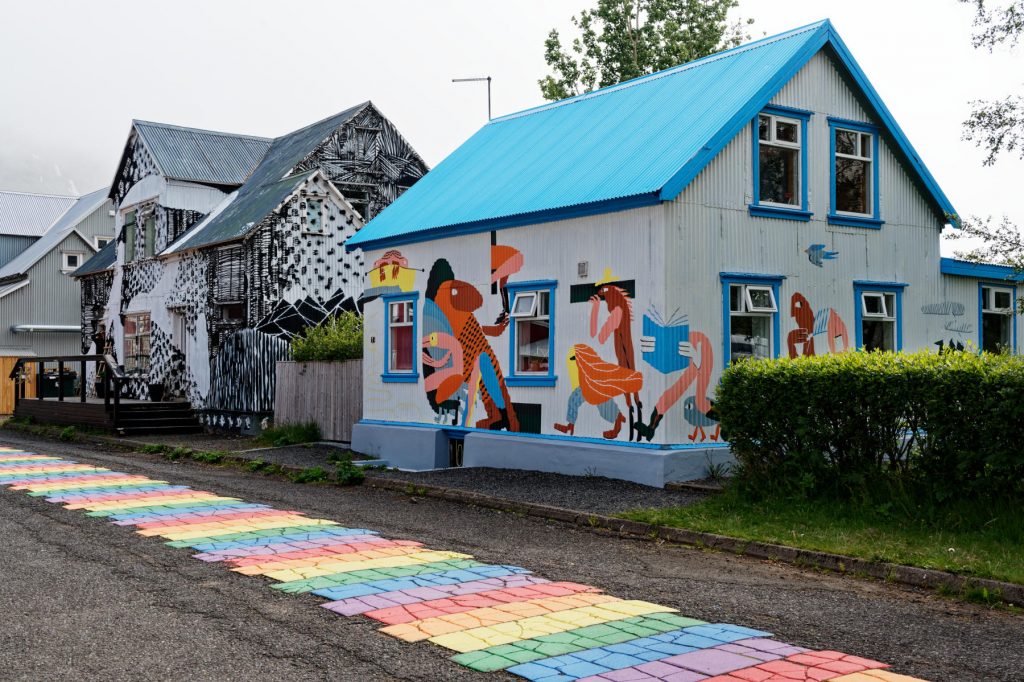 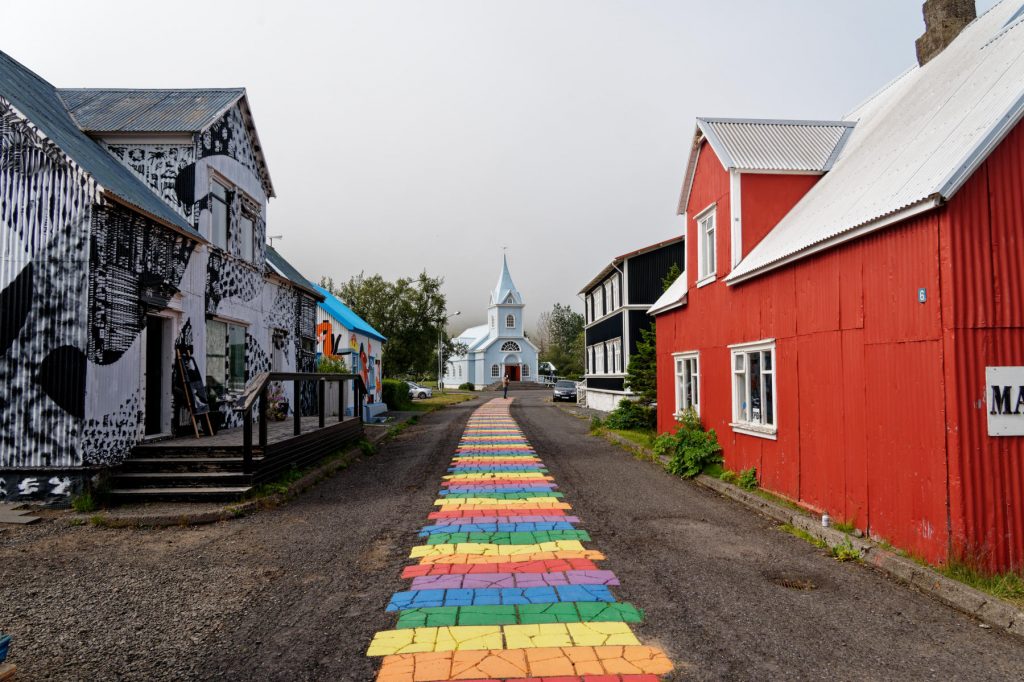 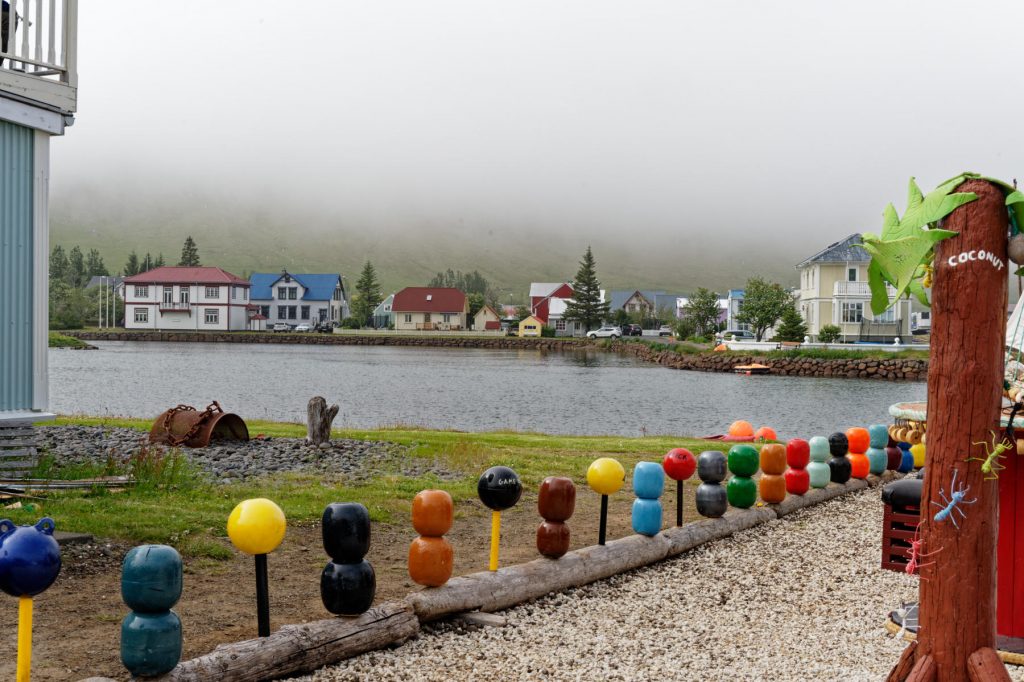 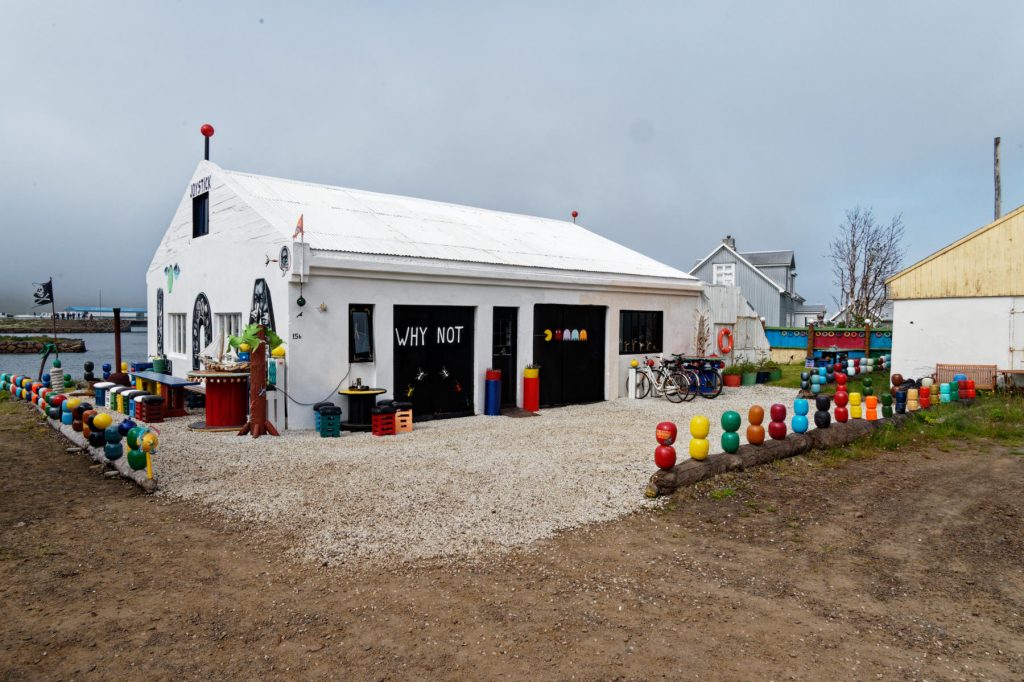 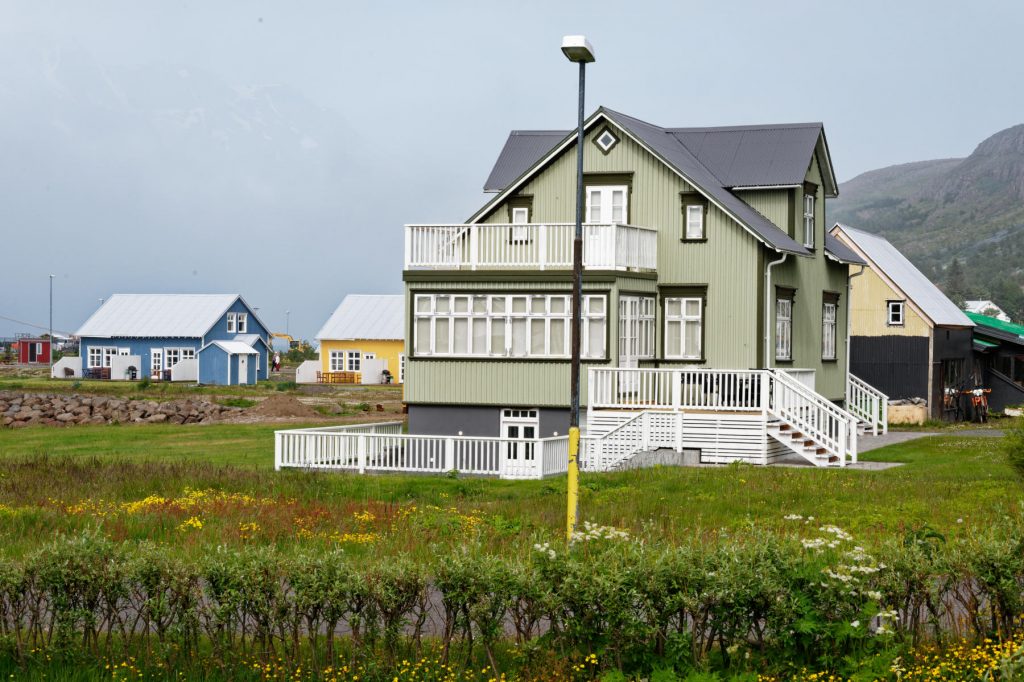 as well as a cruise ship harbour (this was the Viking Sky, a 900-passenger ship so relatively small by cruise ship standards – relatively large by eastern Iceland fishing town standards though… we encountered the blue buses full of cruisers at some of the sights we visited). 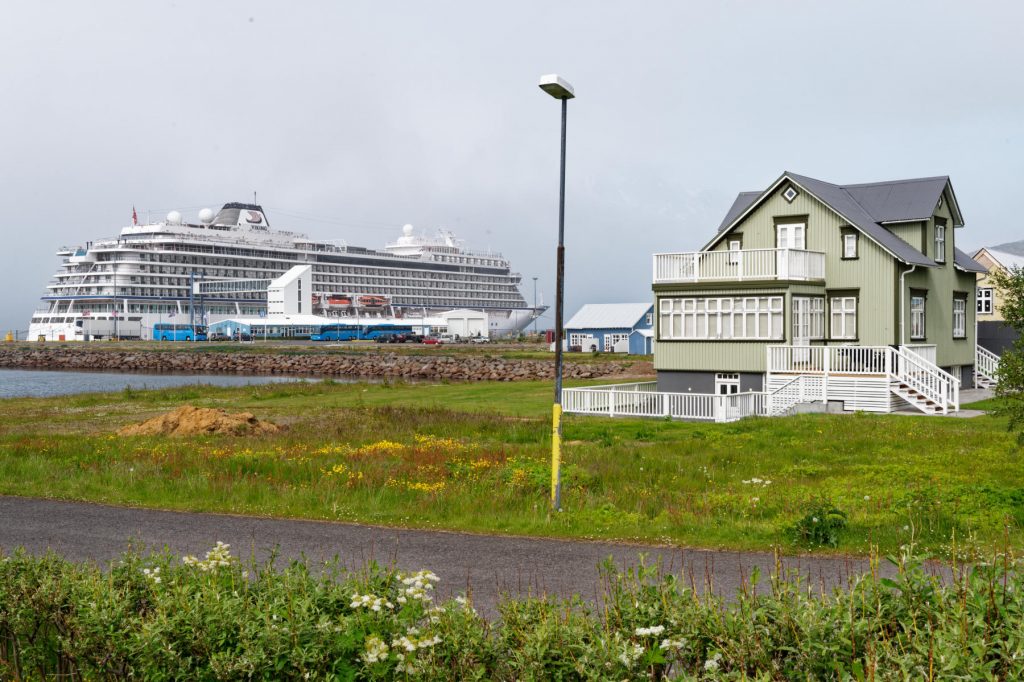 The church is attractive outside 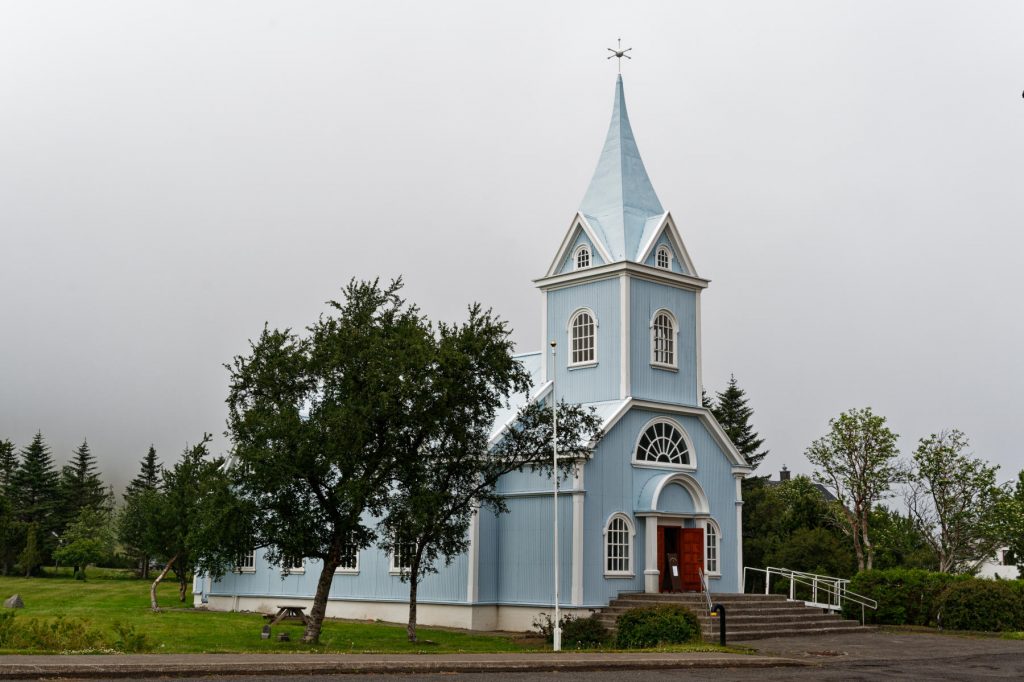 and lovely inside, with a wonderful scent of wood. 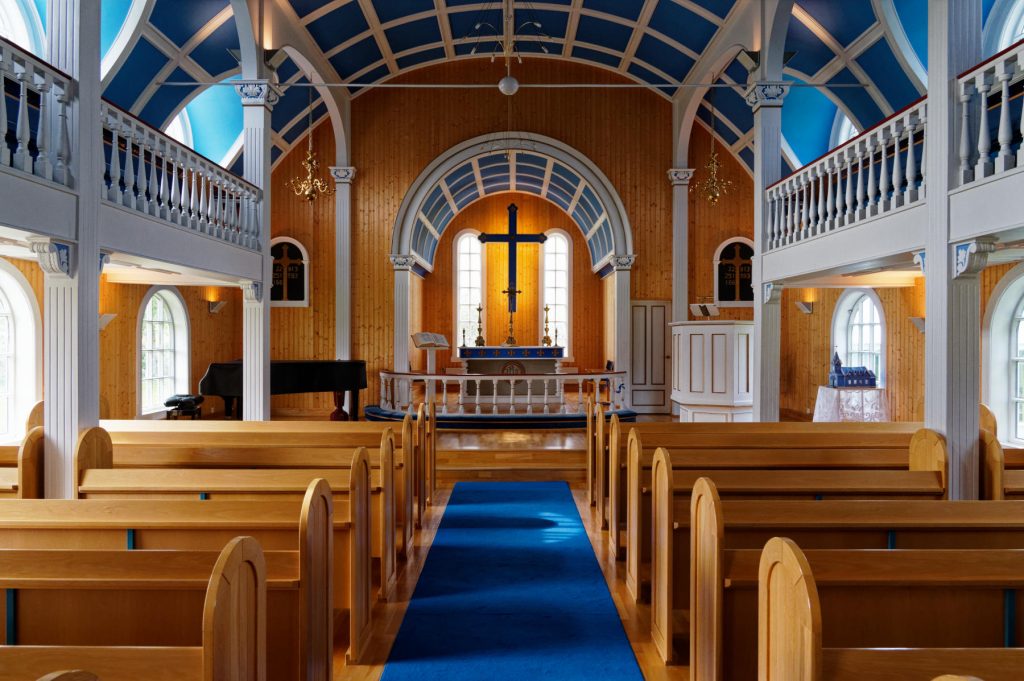 With the Seyðisfjörður box ticked, we simply then had to head back across the hills to get to our hotel.  En route, there was some great scenery 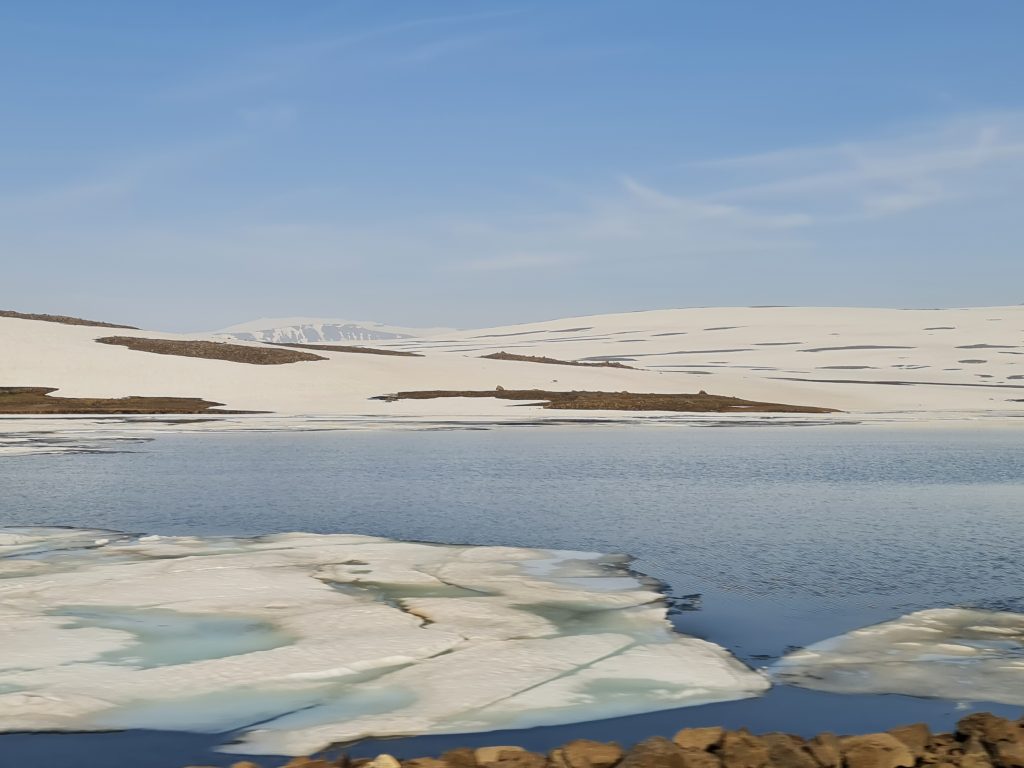 and a completely bizarre art installation 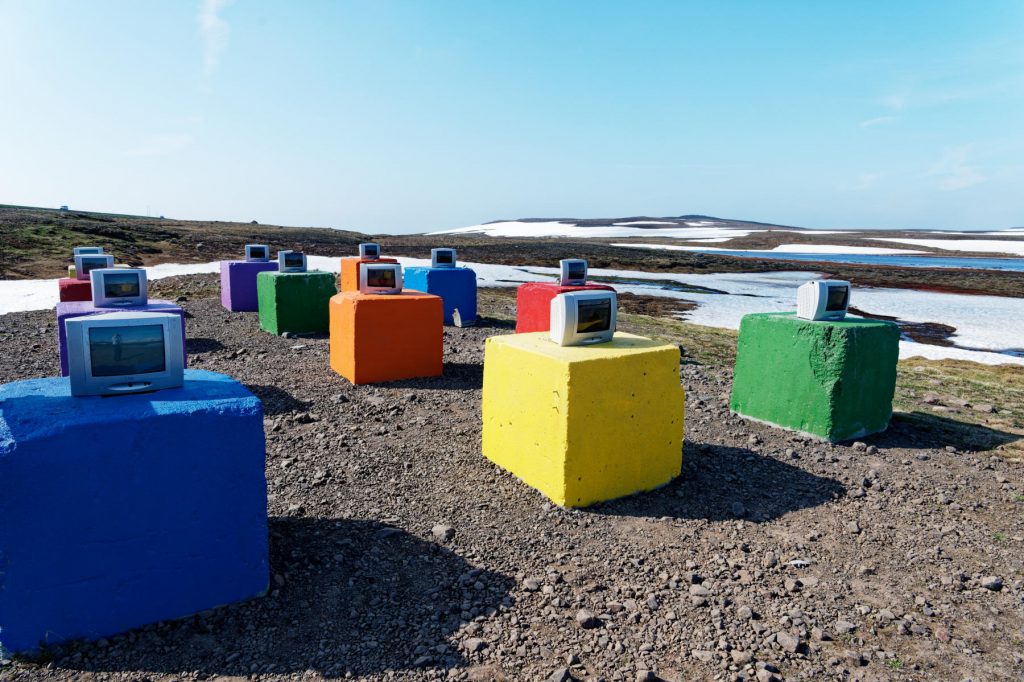 This is called Sæki Þetta Seinna, or “Heavier Mountains”, and I simply can’t be bothered to type in an explanation, so here’s a photo of the “explanatory” sign. 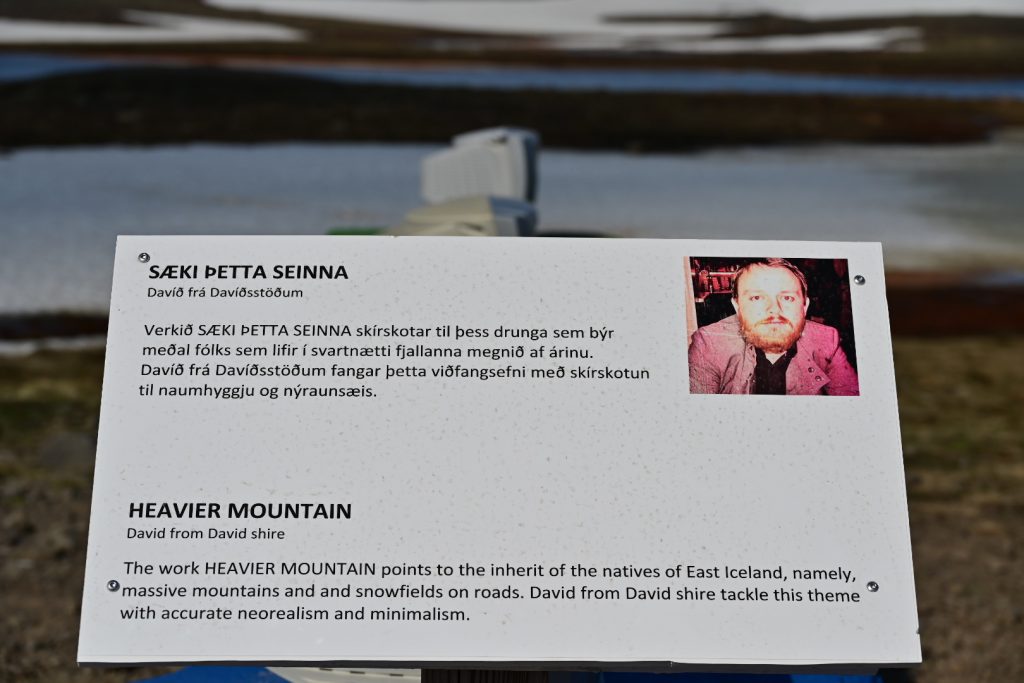 This is what the TVs were facing: 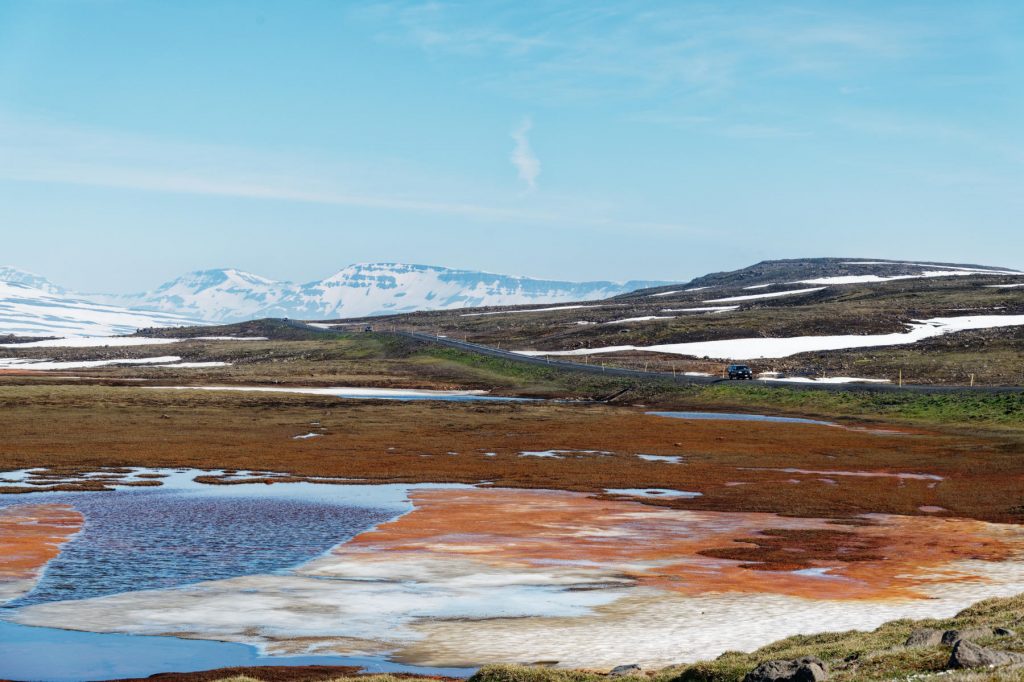 Accurate neorealism and minimalism? Or just utter bollocks. You decide.

Anyway the final town en route to our hotel was Eskifjörður. The town features a modern version of the fish processing factory we first encountered at the Herring Museum, and as a result the town smelt (see what I did there?) rather strongly of goldfish food… Anyway it also featured yet another unusual church. 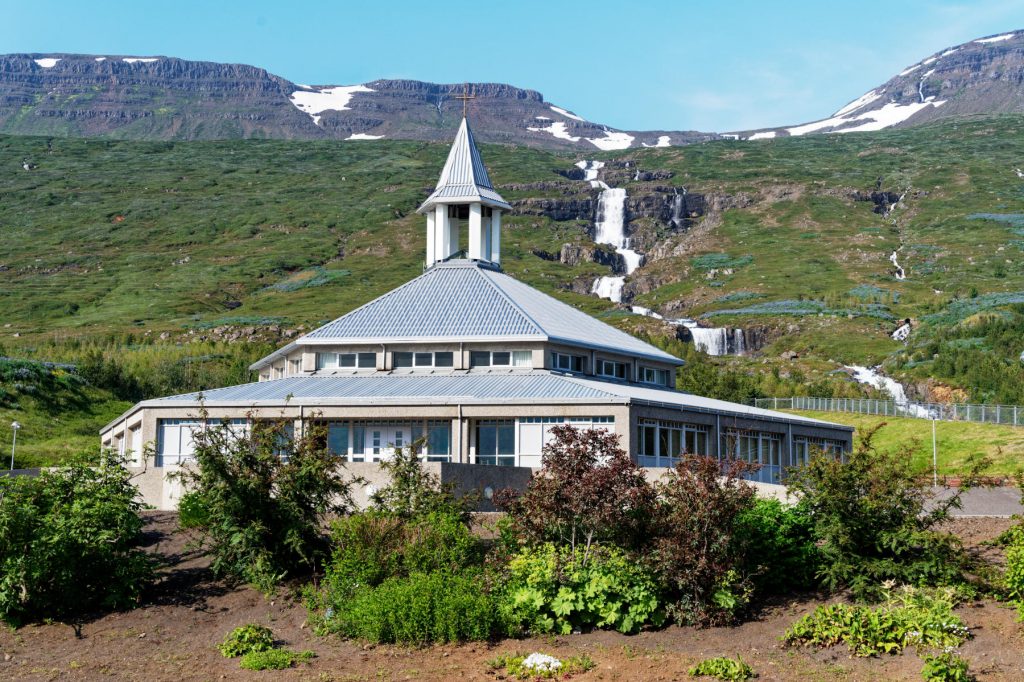 which we’ve added to our burgeoning collection, and a rather cute hotel setup called Mjóeyri, which is a central building and several cottages. 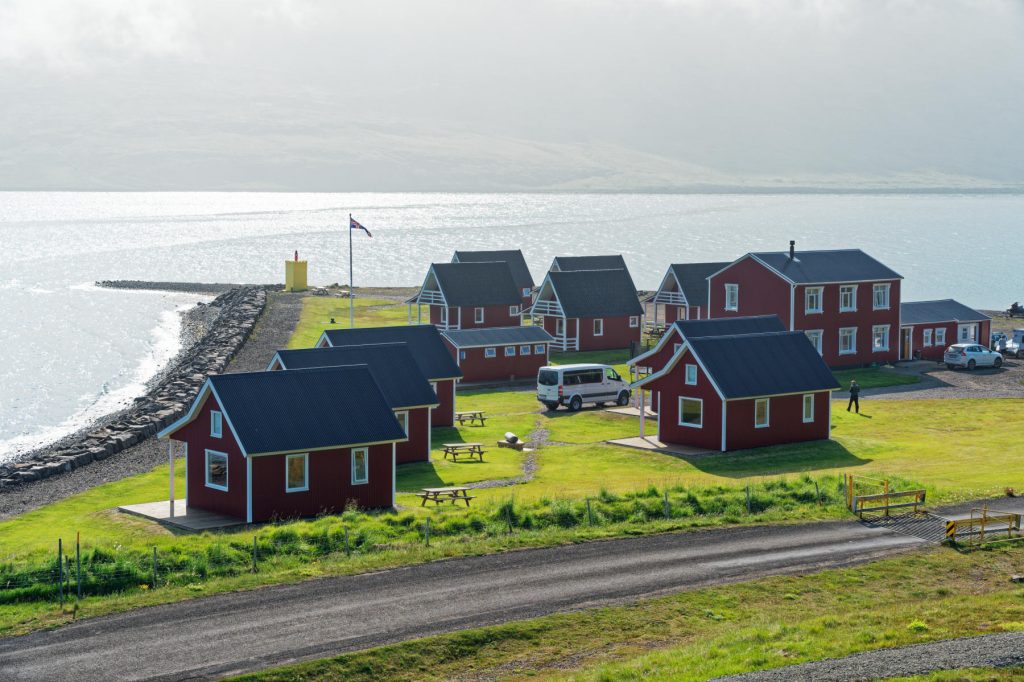 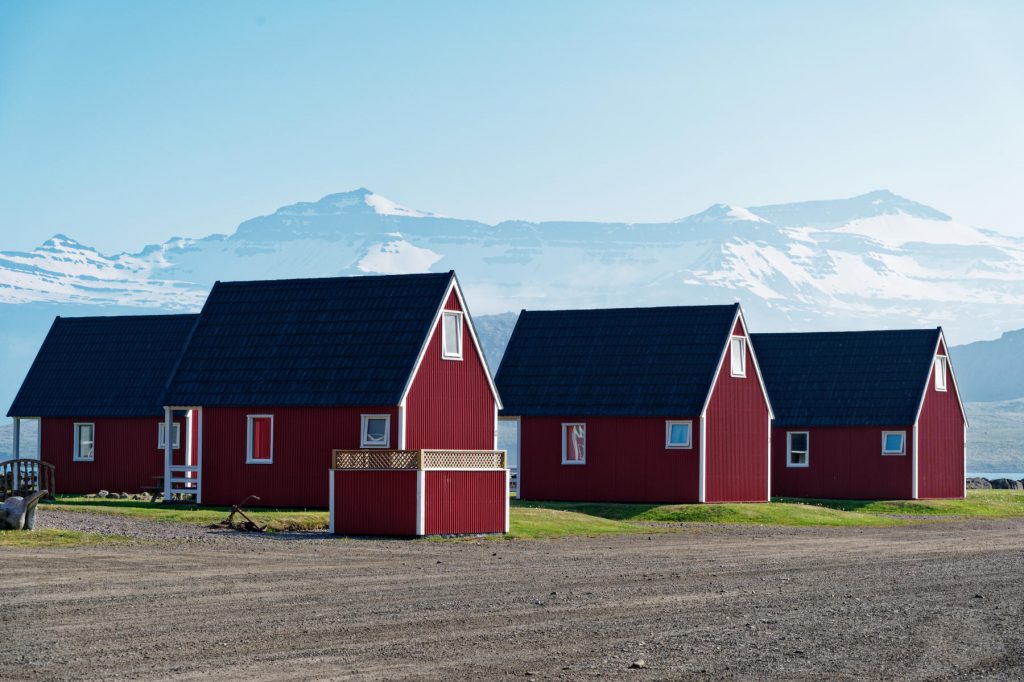 The route to our hotel took us back through Reyðarfjörður, which has a remarkable aluminium smelting operation on its outskirts (it was hoped that this would save the village by bringing in jobs, but it didn’t really work, sadly). 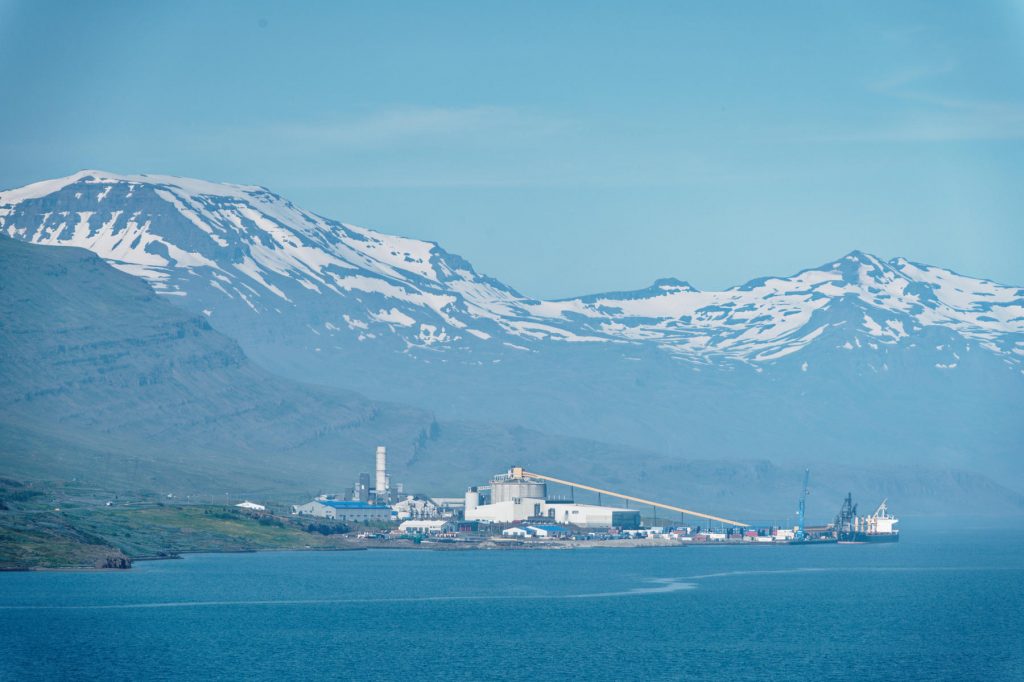 And so we ended our day at the Fosshotel in Fáskrúðsfjörður, which has a lovely setting and a very, very slow kitchen.

And so to bed, with the ongoing journey towards south Iceland starting tomorrow.  Please come back and see how it went, won’t you?