Saturday September 21. After all the agonising about photo gear, I made my choice and managed to get everything into my very heavy backpack. So, off we went to the airport – taxi on time, no significant traffic holdups, swift bag drop queue, not too long through security.

It took us a few seconds to find the champagne bar which is an ineluctable part of our airport-based holidays, but Jane’s unerring instinct soon had it pinned down and I could post my first smug photo of the holiday 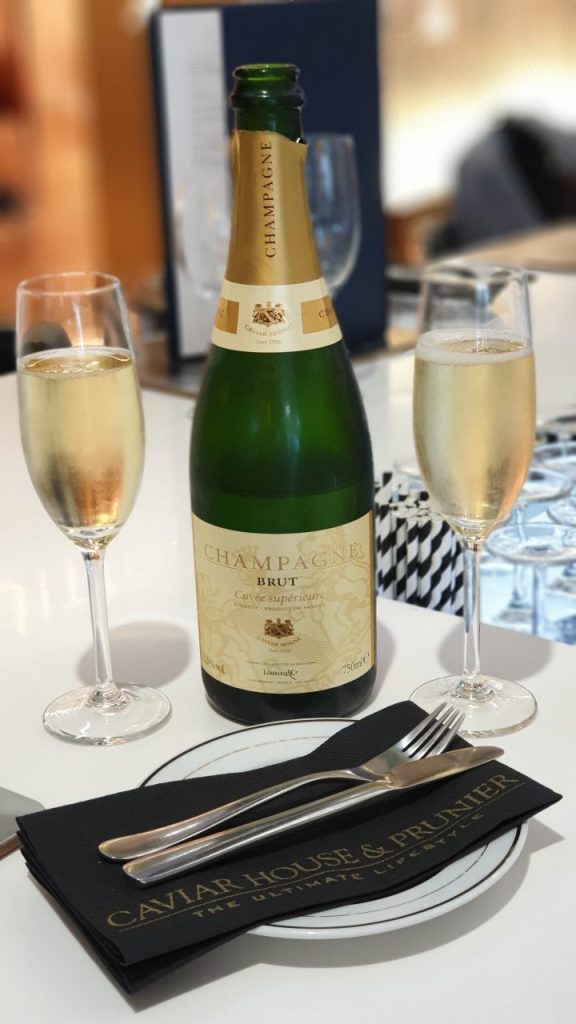 However, this then happened. 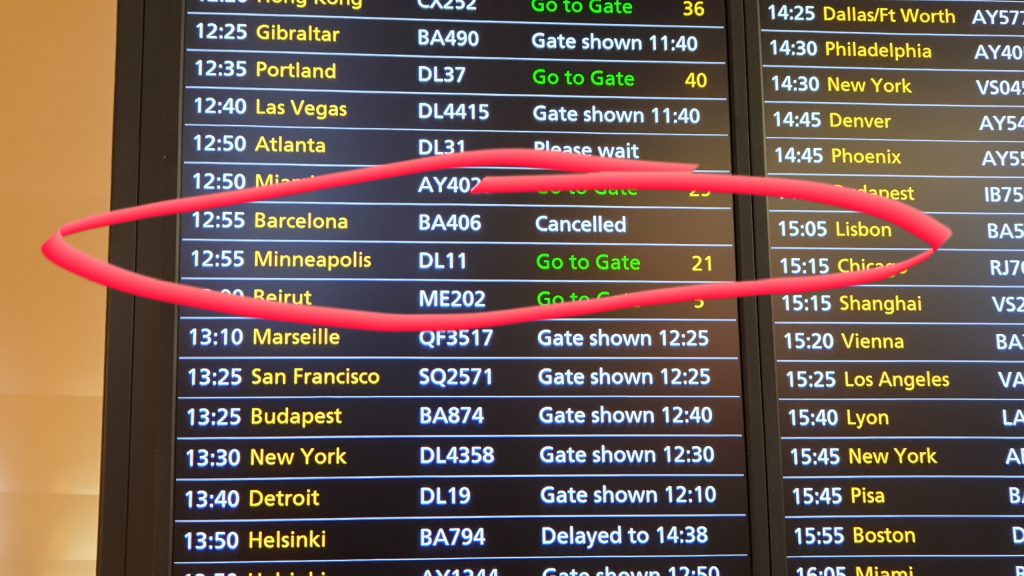 In BA’s defense, they did tell us promptly about the cancellation and we were booked automatically on to a later flight – BA 486 at 1640 – which I was able to accept online. We still had some champagne left once we got the message, but I was sufficiently worried about the process of ensuring we had a seat on the new flight that I felt compelled to leave the champagne bar with liquid still in the glass and find a BA desk (a two-stage process, involving first a general information desk to point me in the right direction, ‘coz otherwise I wouldn’t have had a clue). Jane gallantly volunteered to stay behind and guard the champagne and my camera gear, although I’m not sure she cared too much about the camera gear. Unsurprisingly, I suppose, the BA desk – a not inconsiderable walk away – looked like this. 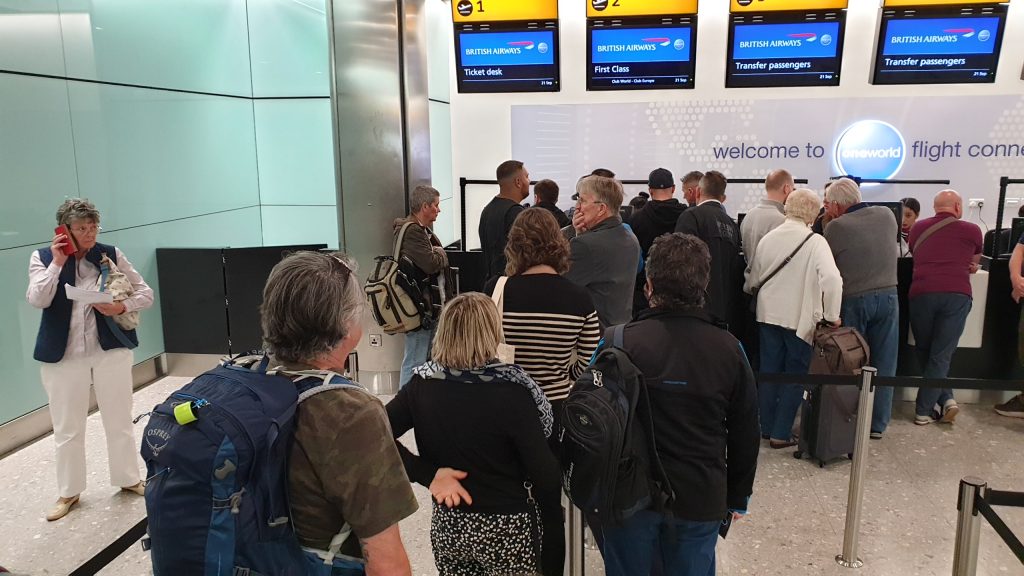 but actually, again in their defense, things moved quite swiftly and I was fairly soon able to talk to someone about new boarding passes.

Another wrinkle appeared at this stage, as I had turned up solo but with two passports and boarding cards for the original flight. Inconveniently, the lass behind the desk required to see Jane in person, for some reason being reluctant to trust a champagne-sodden pensioner. So a phone call ensued to a second champagne-sodden pensioner, who remarkably persuaded the staff to let her leave the bar without paying the bill first, and gallantly shouldered my 25lb rucksack and made haste to the service desk, where we were issued with, in order, new boarding passes, an apology and vouchers to contribute towards the soddening champagne – which was still there when we got back! Result!

We wondered what would happen next? It won’t be coffee, we thought, as the champagne bar’s coffee machine is bust….sigh.

Actually, one of the bar staff was sufficiently enterprising to get the coffee machine working, so we did have some coffee, and stayed at the bar for a while until, yes you guessed it, our rebooked flight was delayed by a further hour. At this point we decided that we really ought to take some lunch, so I looked up “fine dining” in Heathrow T3. This mentioned two places, neither of which, frankly, inspired confidence, but we selected Oriel, which was just along the way. It was clear that their emphasis was on throughput – barely had we settled ourselves when our order was solicited; and it seemed that seconds after we’d placed it the food was there. The service, however, was very engaging, and the food was OK (as was the Malbec).

After a while, we took ourselves off to seating in the general area, and Jane got in touch with our travel organisation to ask them to rearrange the taxi to meet our rearranged flight, and sat around waiting for the gate to be announced. Eventually, Gate 3 was trumpeted as our destination, so off we trotted. As we approached the gate, which looked suspiciously quiet, Jane heard someone call out that it was Gate 5 not Gate 3 – and there was a healthy-looking queue outside it, so rather like in a communist state we went to join the queue just in case it was the right one; all the signage said “Gate Closed”, but there were a lot of people in BA uniforms running about inside it so it looked promising.

Long story short – we got on the plane and – would you believe it – there was an Air Traffic Control delay, so the driver put the plane at some remote corner of the airfield whilst he awaited permission to take off. And take off we did, at around 1830, some five-and-a-half hours late according to our original schedule.

The plane made up some time en route, so we landed only five hours late, and looked for our rebooked transfer – without luck, as it turns out; Jane got an apologetic message from the travel company saying that with so many delayed flights it had been impossible to rearrange and could we take a taxi instead? So we went outside to the taxi area, and 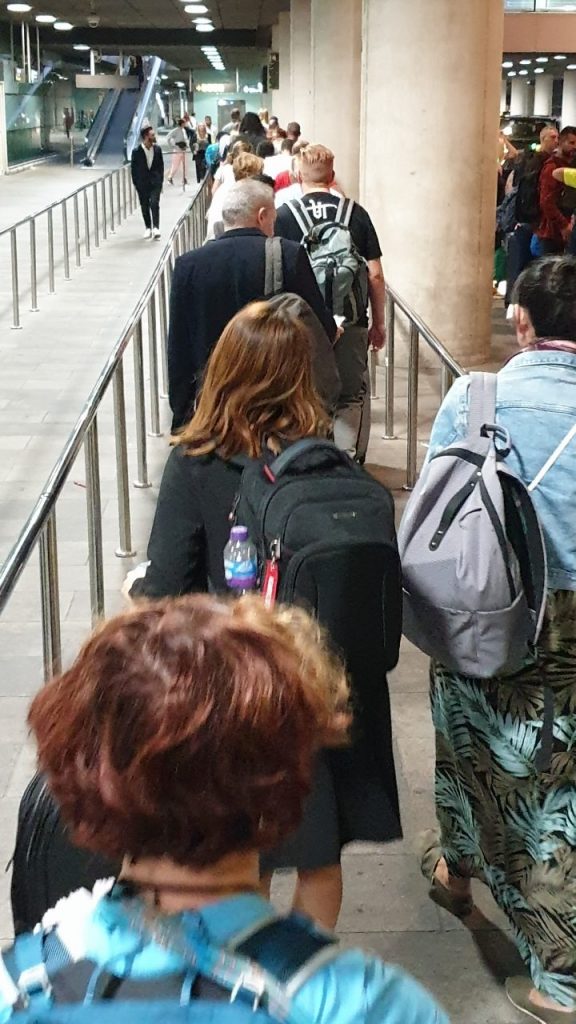 Actually, the queue moved swiftly, as did our taxi, whose driver showed a fine disregard for speed limits as he whisked us to our hotel, the Podium, in downtown Barcelona. The final hurdle – they had no record that the room was pre-paid – was cleared after discussion and so we could retire to our nice room for a cup of tea and a night that was by no means as early as it might have been. 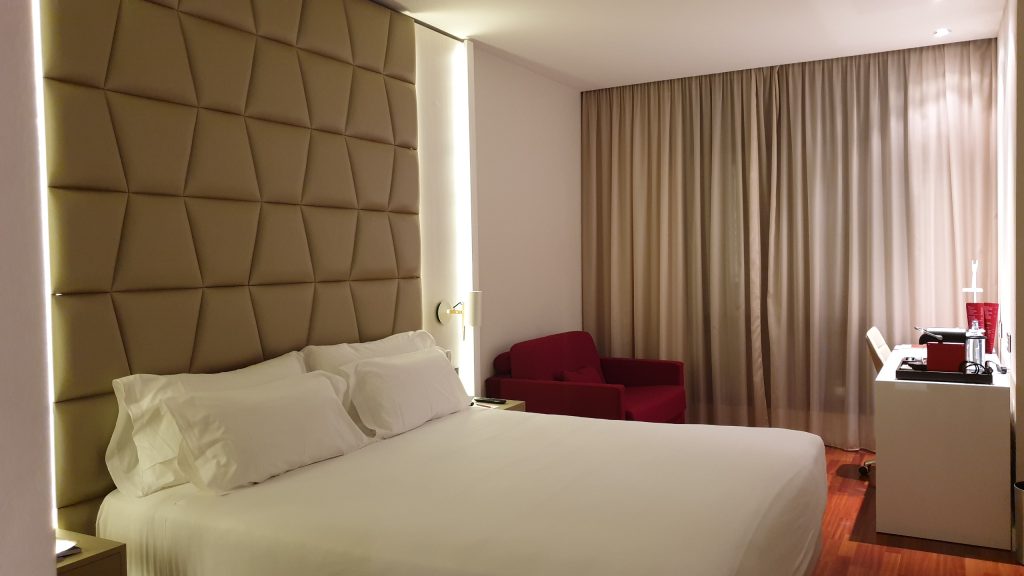 The story will continue tomorrow as we try to find the Human Towers!

5 thoughts on “Stumbling at the second hurdle, also”