18th September – The tour buses came for us at 0830 and transported us to the start point of today’s walk. I was, as ever, grateful that they did the work to give us some altitude, as this meant I didn’t have to. As Željko had explained the day before, there would be a down side later, in the form of much walking down, but his view was that walking up 800 metres from Bol and then simply turning round and walking back down again was less interesting, particularly since that would be in full sunshine (and 30° heat) all the way. So instead we were dropped at somewhere in the middle of nowhere notionally called Gažul, which left us just a couple of hundred metres to climb before we had to make our way back down to our hotel in Bol.

Gažul was a slightly spooky place, practically a ghost village – a handful of derelict-looking buildings miles from anywhere. There were signs of returning population: the local rain-collecting cistern had been repaired and one or two buildings were showing signs of being brought back to a liveable state. Željko explained that the inhabitants would basically have abandoned the village and migrated to the coast to support the booming tourist industry. Now there was the possibility to repair the buildings, but most likely to rent to visitors rather than to live in.

The uphill part of the walk led, unusually, through woodland – and therefore shade! 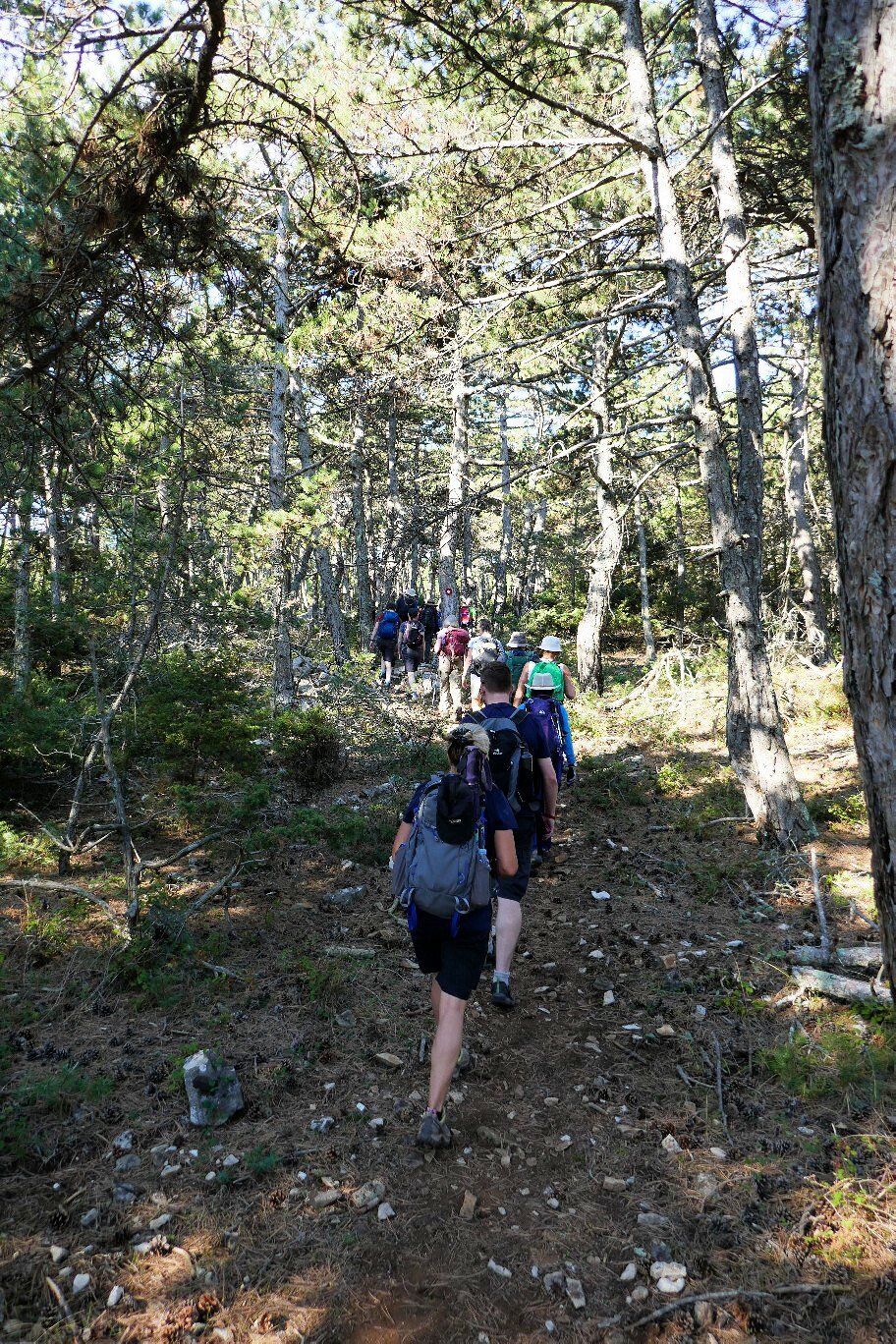 Željko had described it as “basically flat”, and, after a little bit of climbing, it led gently up to Vidova Gora, the highest point on the island. A helpful sign set our expectations as to how long it would take to get there 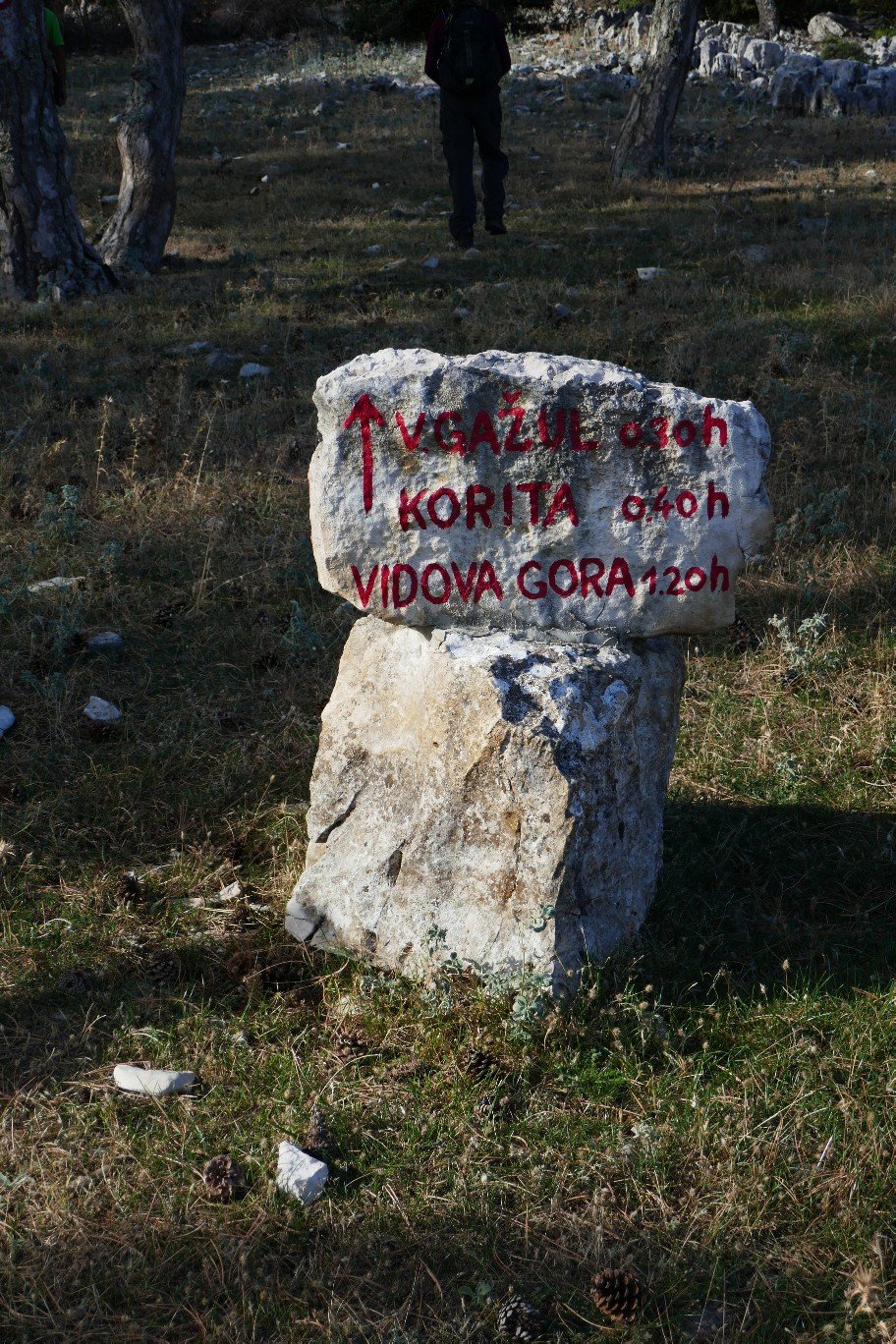 and the route was, like all of the tracks we had followed in Croatia, very well-marked with waymarks in the trees and on the rocks. 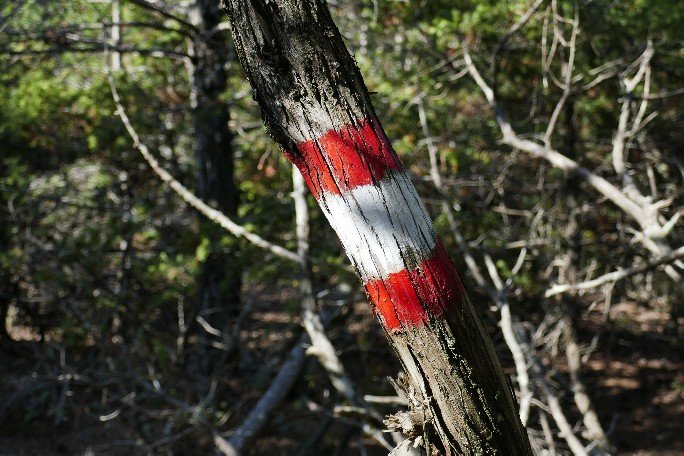 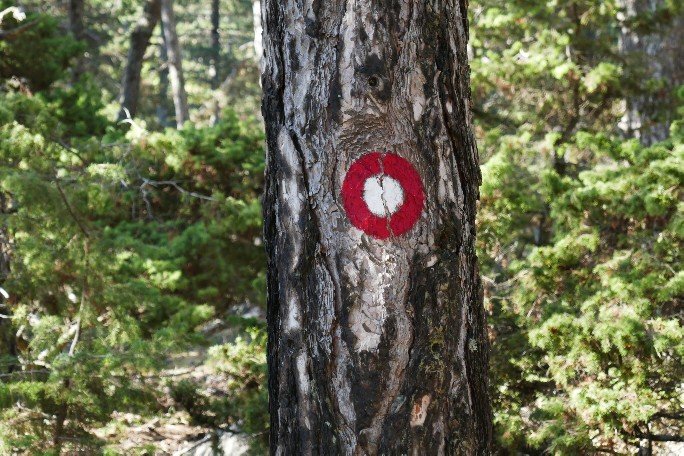 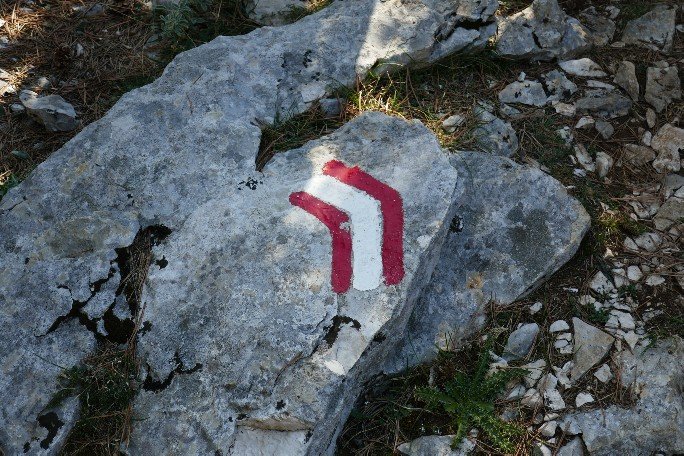 Accordingly, after about an hour and twenty minutes, we arrived at the top. There used to be a restaurant here 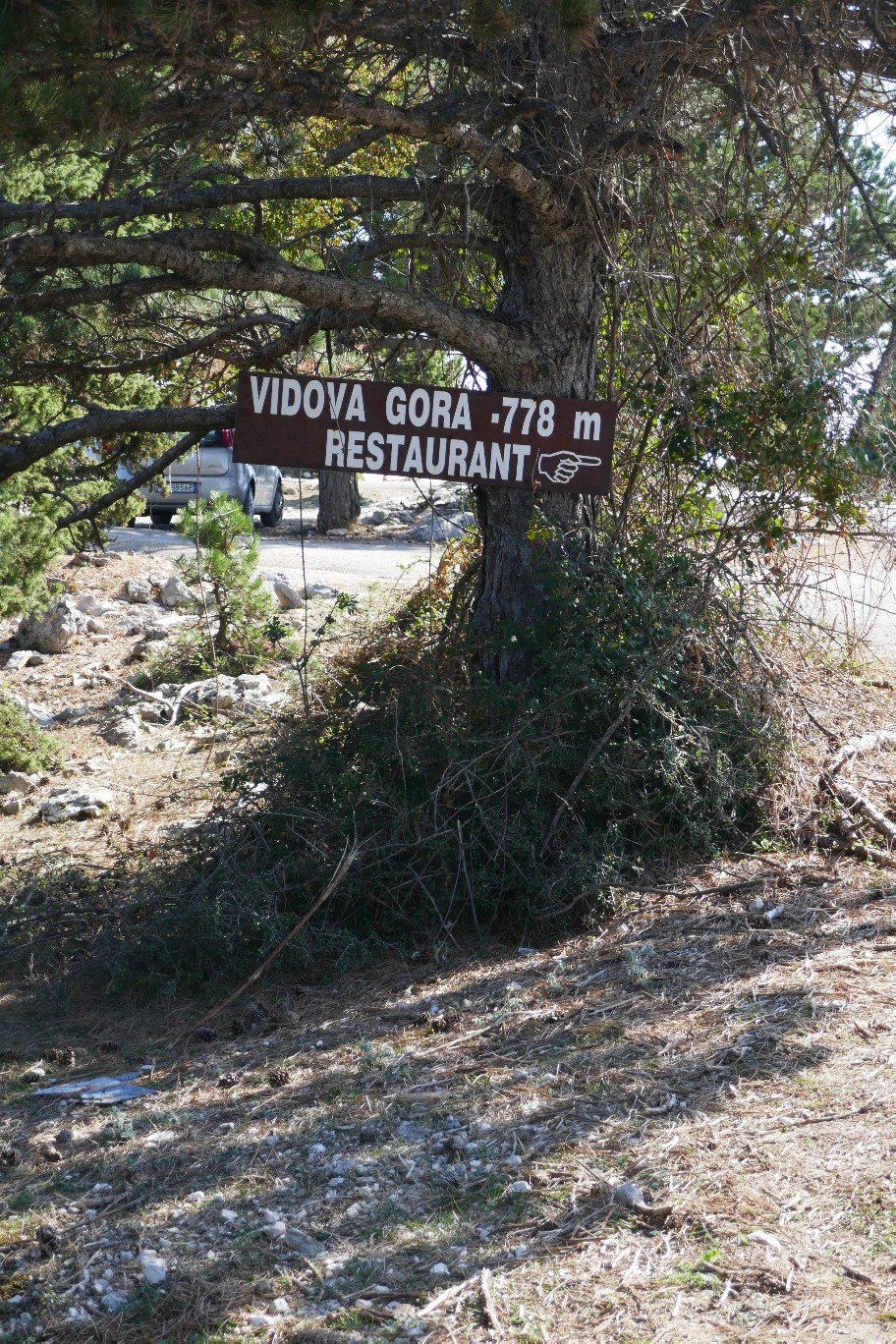 but it was now closed (no beer for me, then!) and, in any case, Željko explained, despite it selling good, if simple, fare, the proprietor had been an eccentric veteran soldier with a short fuse and a shotgun. Probably best to press on to the penk itself, then: 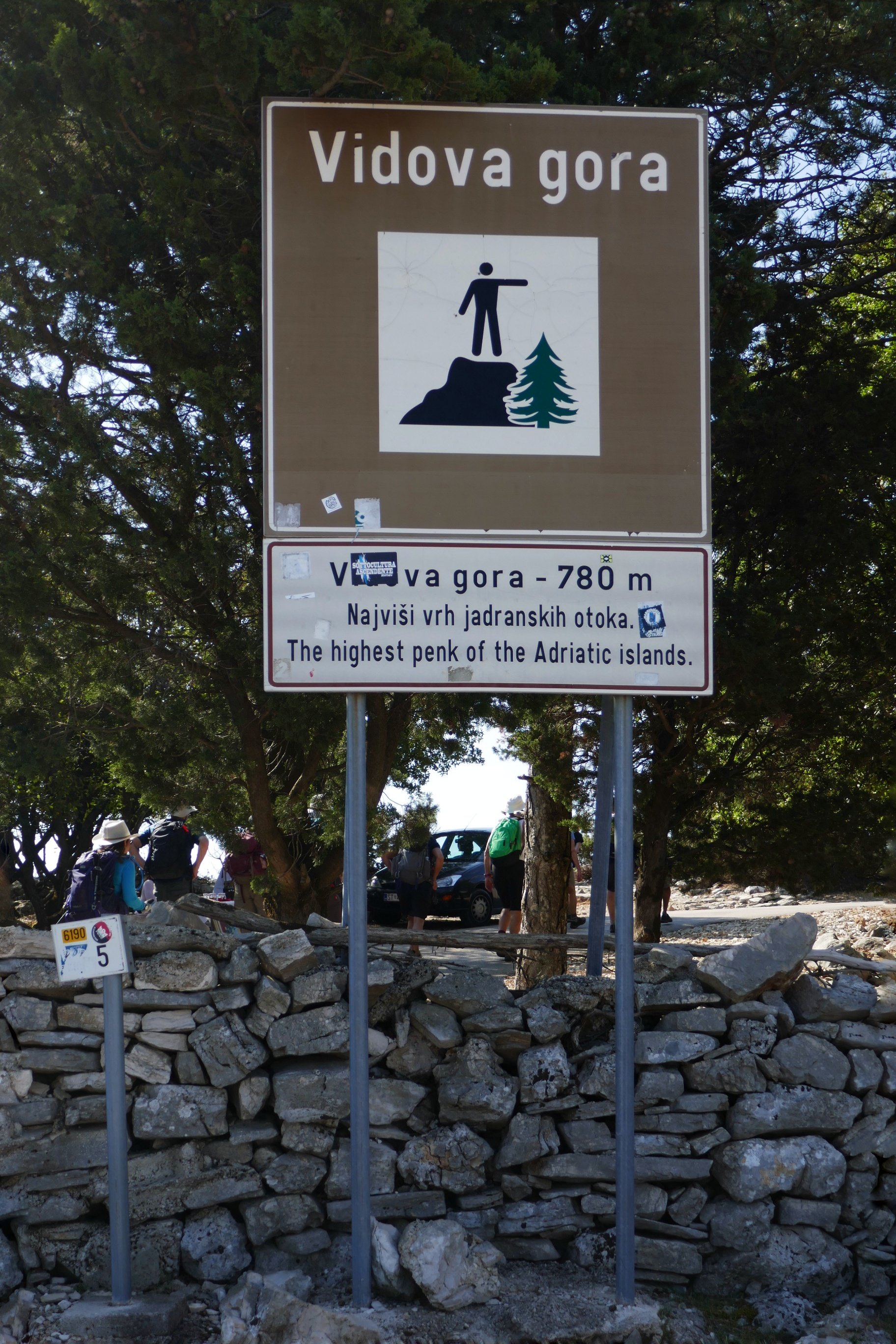 where the view back towards Bol was spectacular, if somewhat hazy. 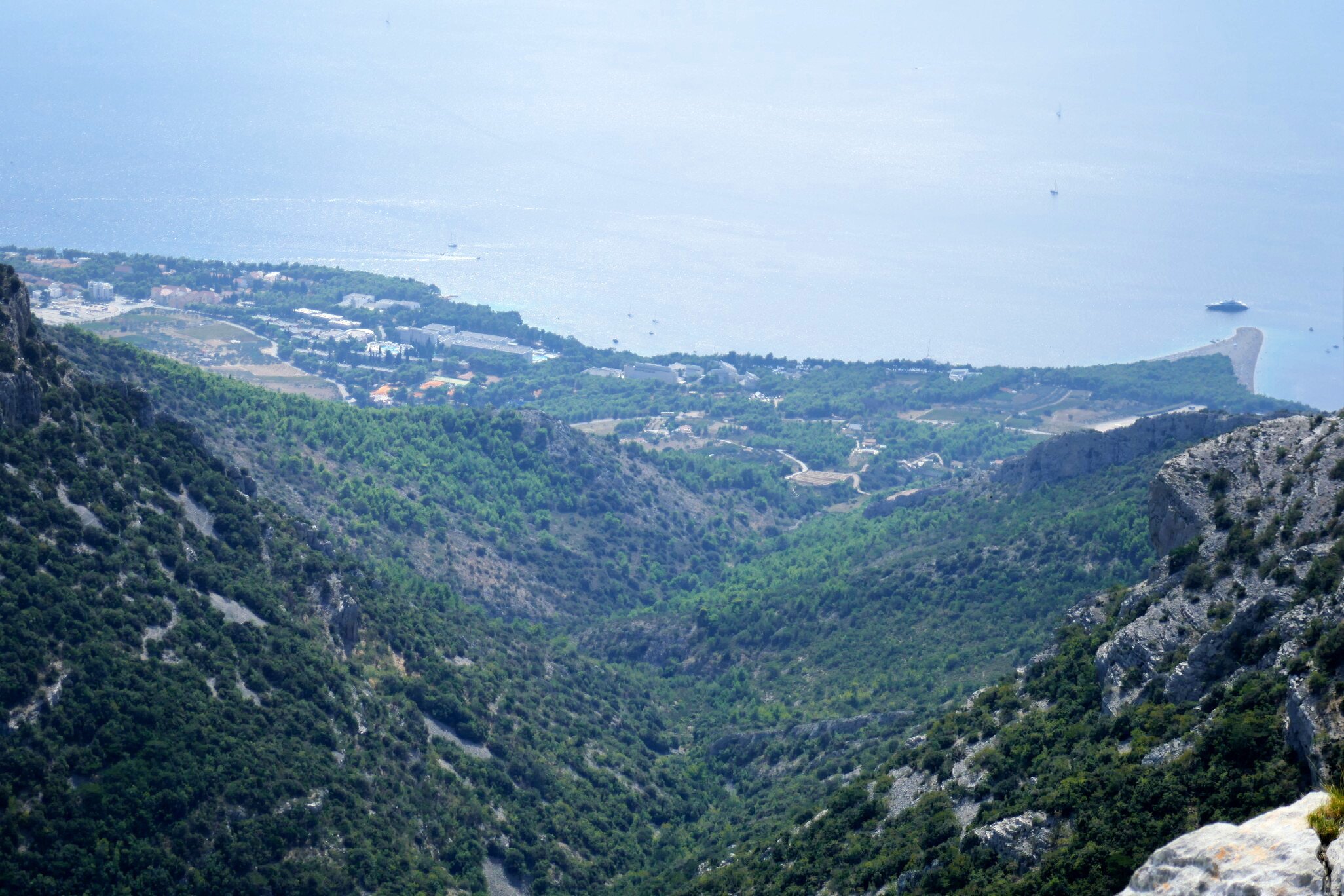 On the right-hand side of the photo, you can see the “famous” Zlatni Rat beach of Bol, with its little tip which sometimes points one way, sometimes the other. Vidova Gora has a sharp and steep drop over the edge – suitable for parasailing; we saw one chap turn up with a parachute and the sort of expression on his face that said he was going to use it – and various wags had decorated the preciptious edge with little rock cairns. 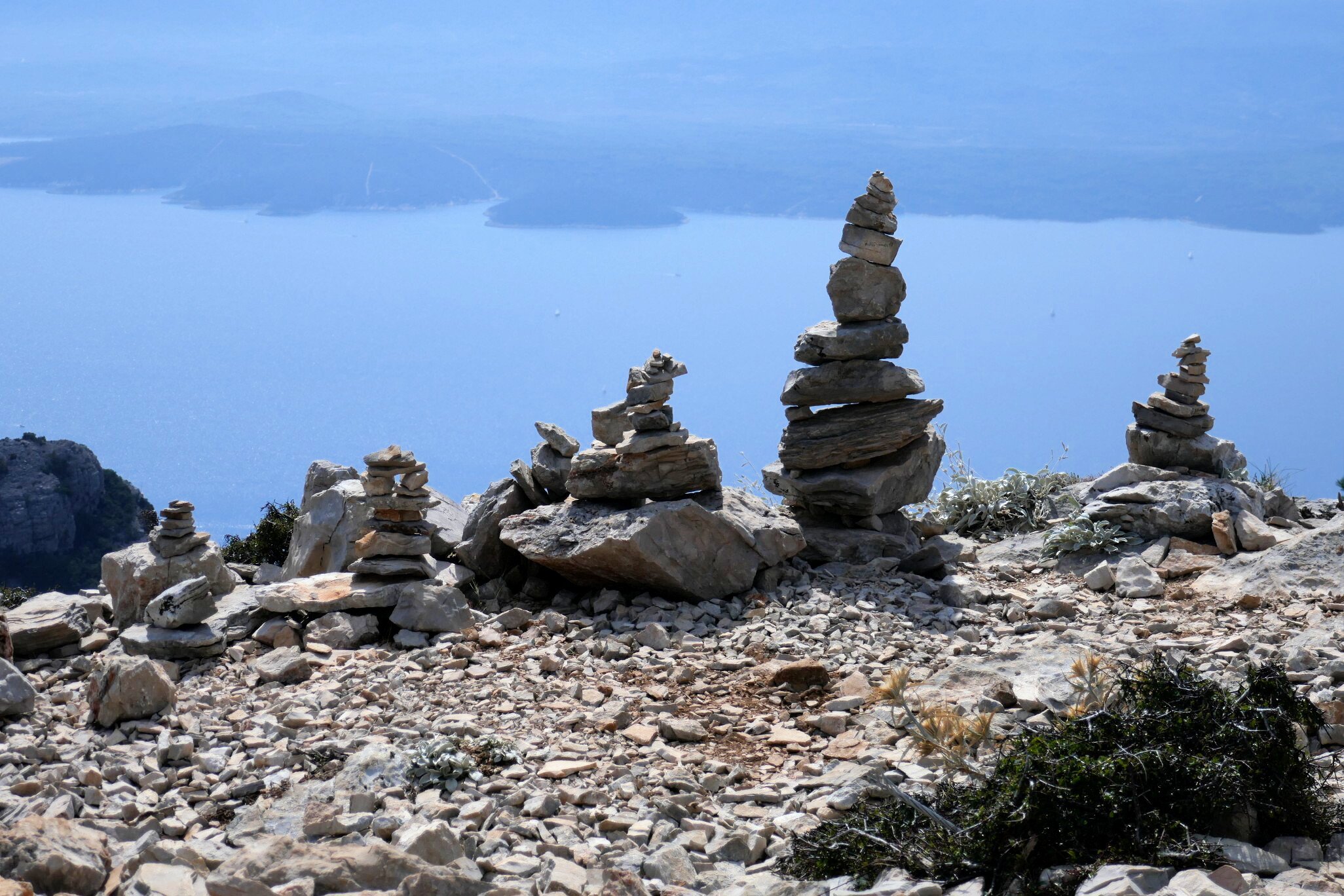 These serve no purpose other than to encourage other people to erect their own, apparently.

After a short break for lunch in the shade of a couple of trees it was time to head down to Bol – a long and rocky path which zigzagged its way down the side of the slope. 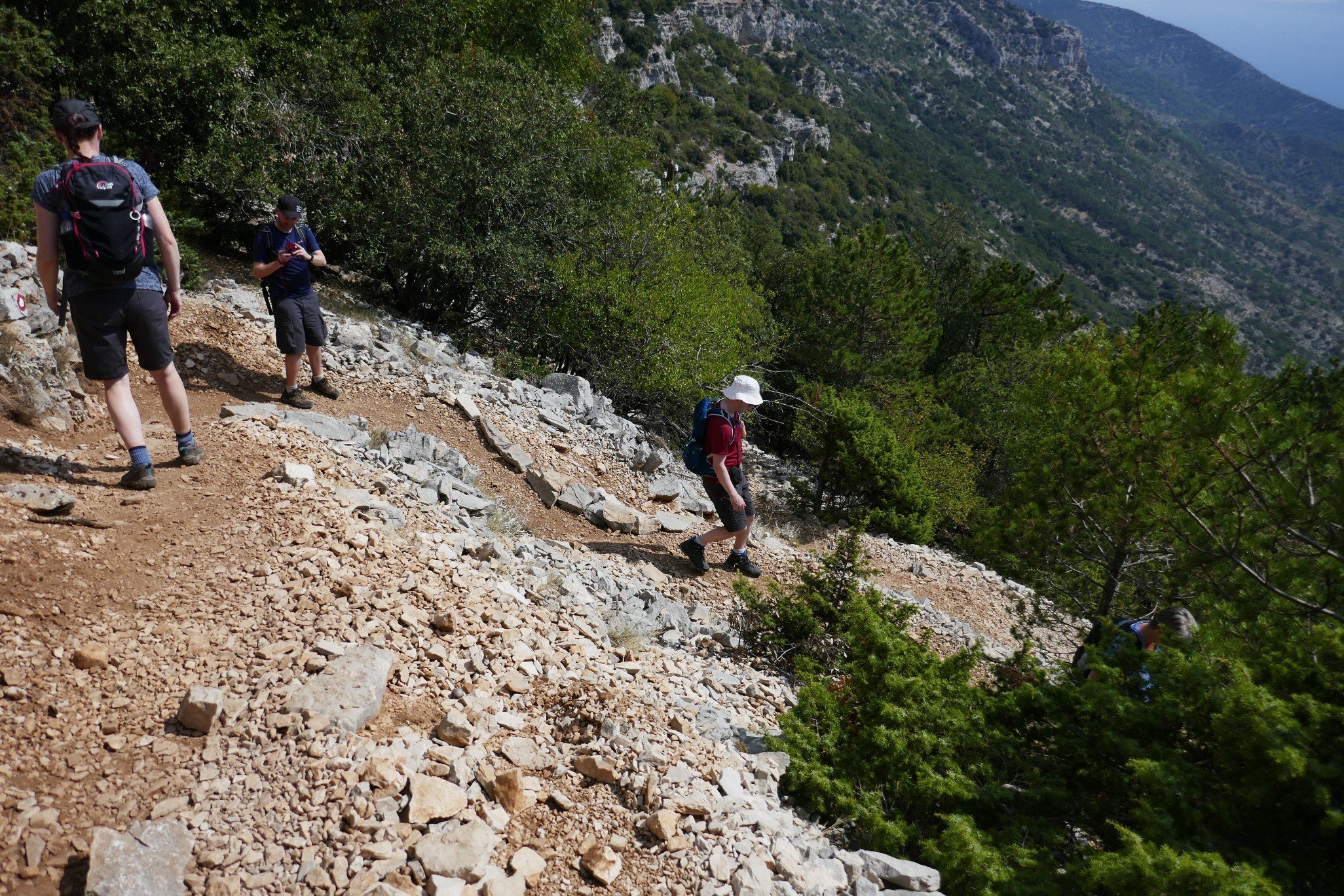 It was a long, hot and sweaty descent, tough, as the day before’s had been, on knees, ankles and feet (incredibly there was someone trying to negotiate this downslope on a bicycle!). But there were a couple of diverting moments on the way down, as the more eagle-eyed in our group spotted things worth stopping to look at, such as this praying mantis 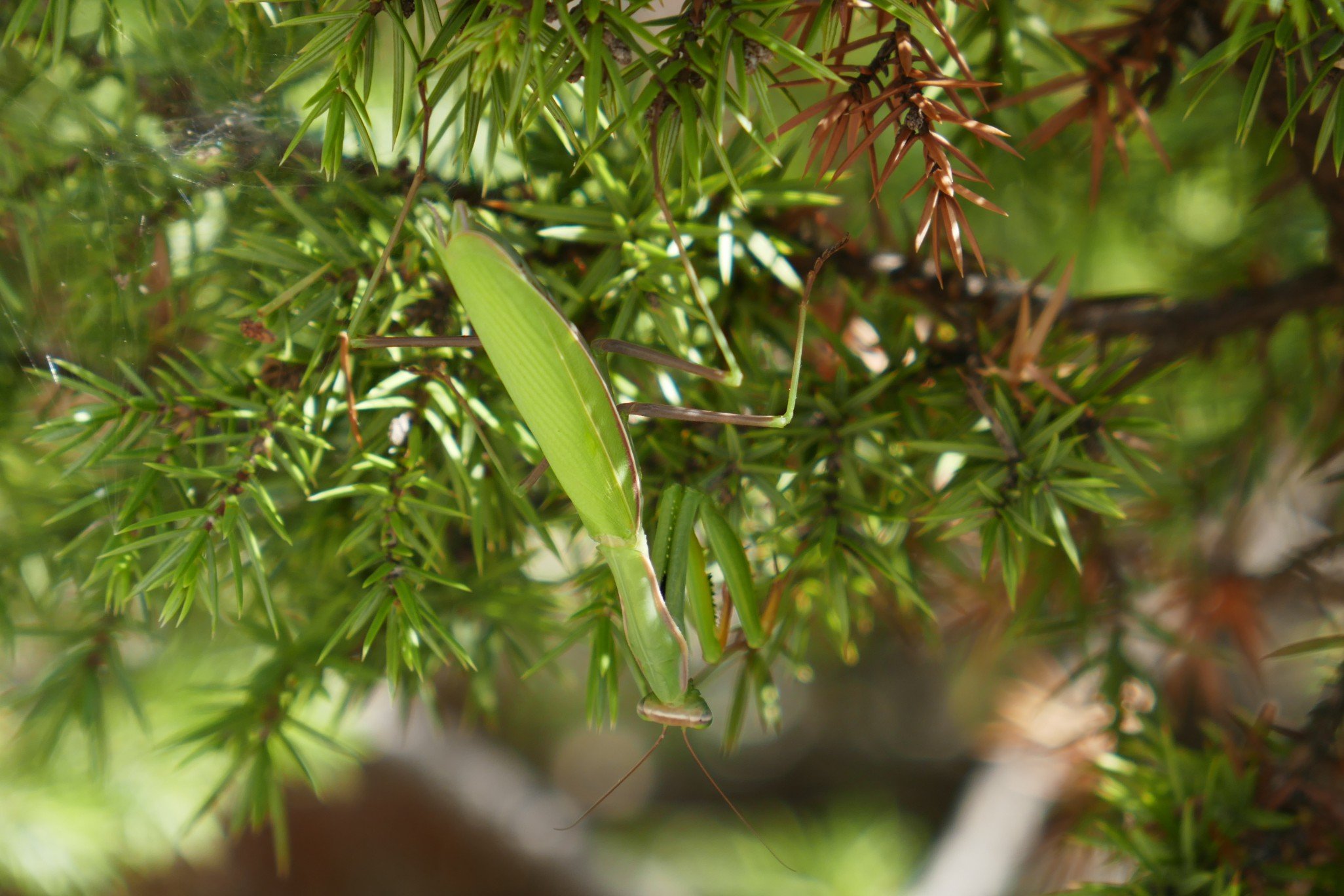 and even a chance to see a cicada, which is a pretty rare thing (unlike hearing them, which is unavoidable). 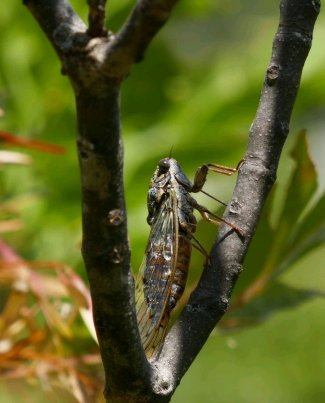 When we finally got down to Bol, a process which took a couple of hours, Željjo pointed out a superb example of a 1960s Croation car called a Zastava, which had a back-end very similar to an old Fiat 500 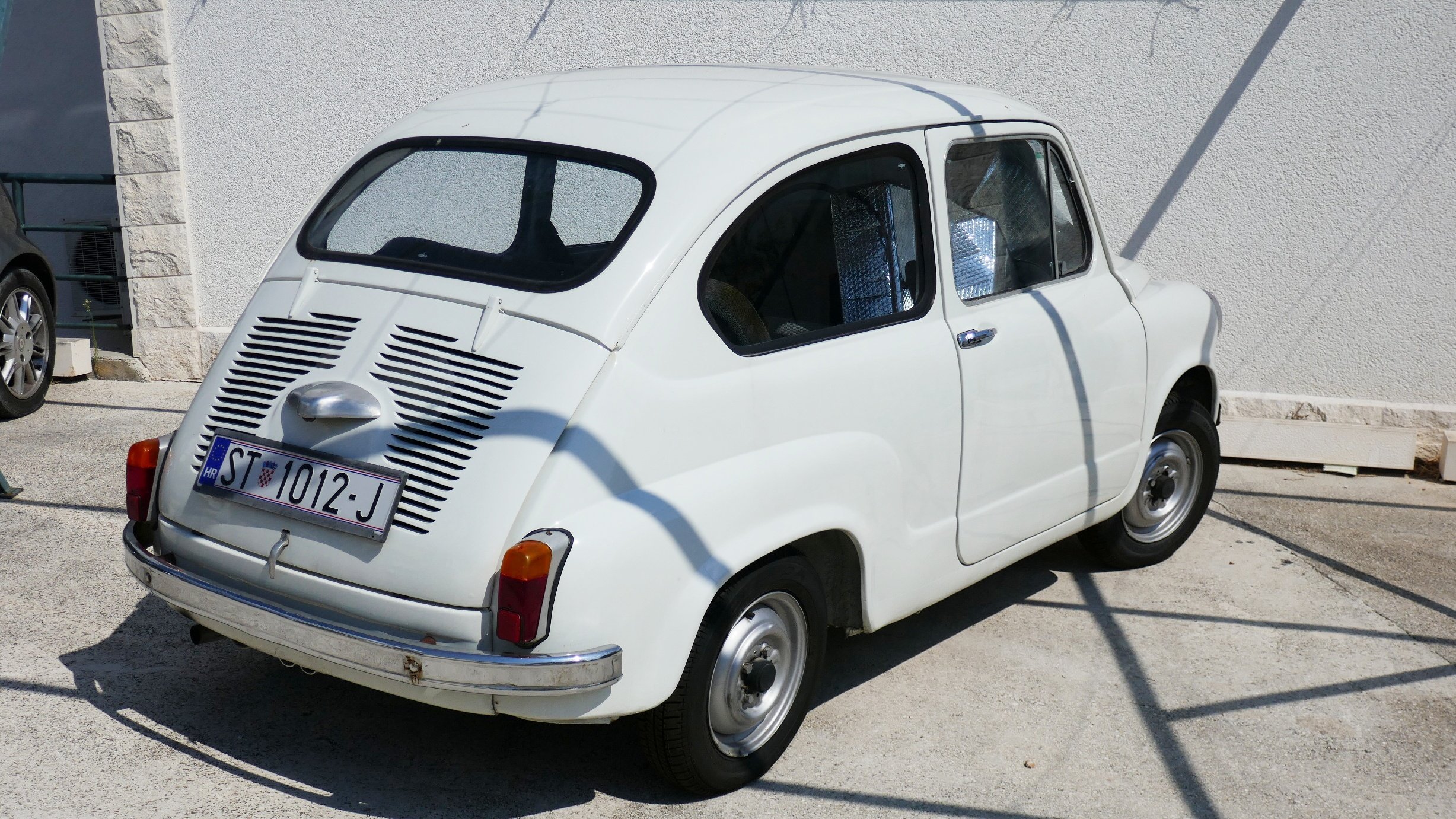 although the front was different. 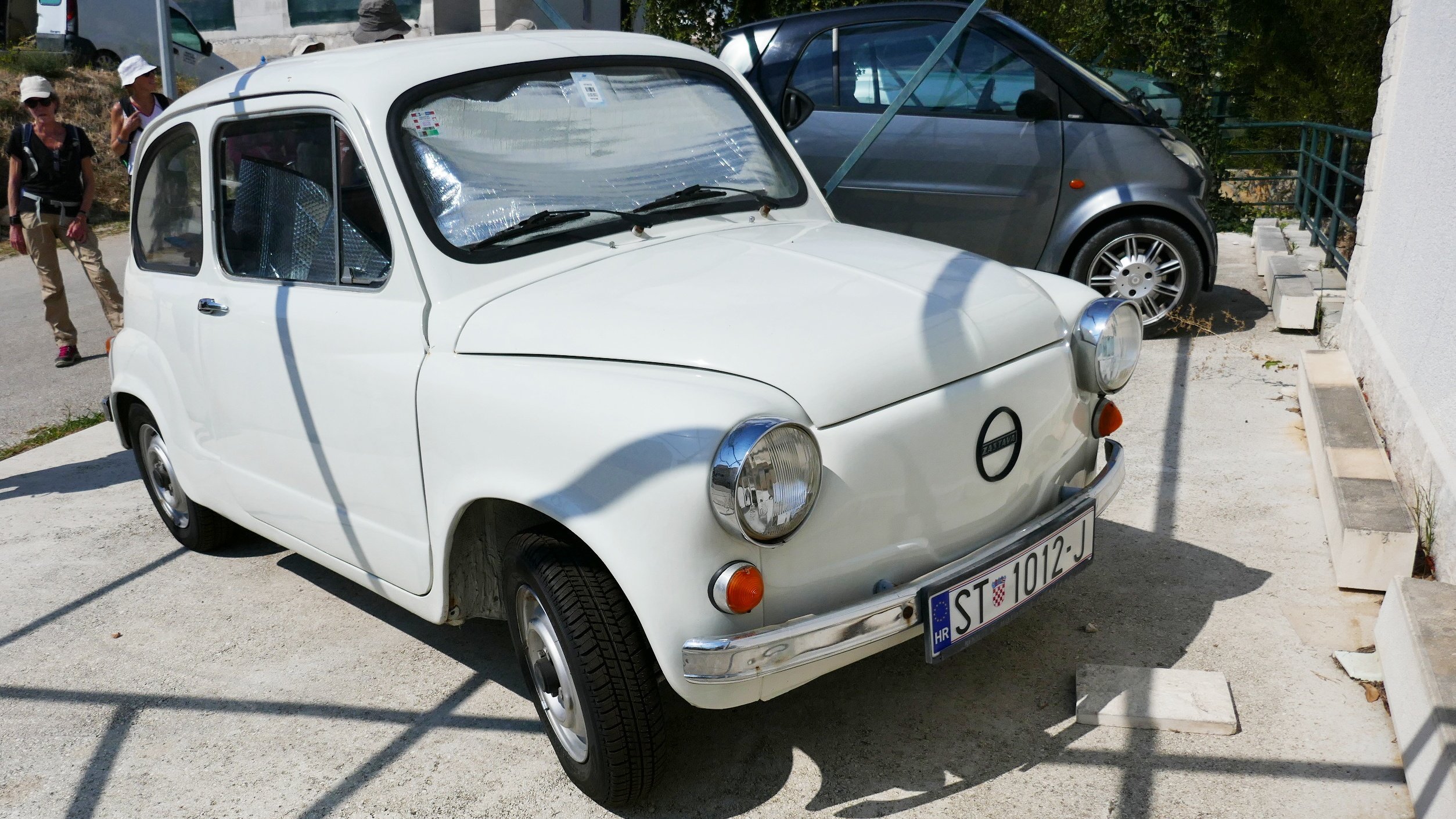 The company that made these was eventually taken over and made cars under the name Yugo, which people of my generation will recall as being alongside the old Škoda and Lada makers in terms of quality and reputation.

After the luxury of a well-earned shower, Jane and I set out on a mission to find pizza, which we found at an agreeable place called Skalinada. After that we went for a walk around Bol, which is small but beautifully formed. 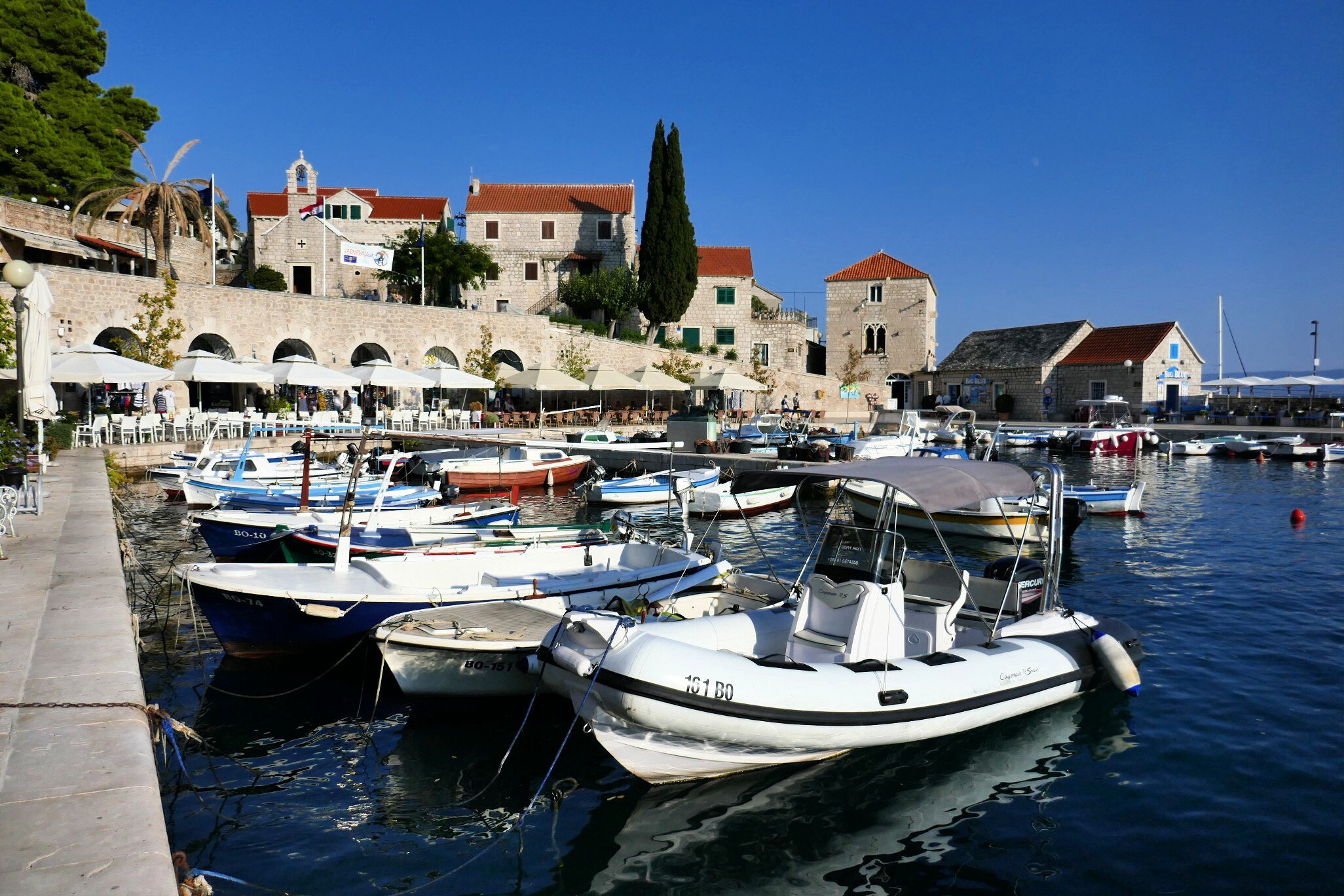 and which has a small market 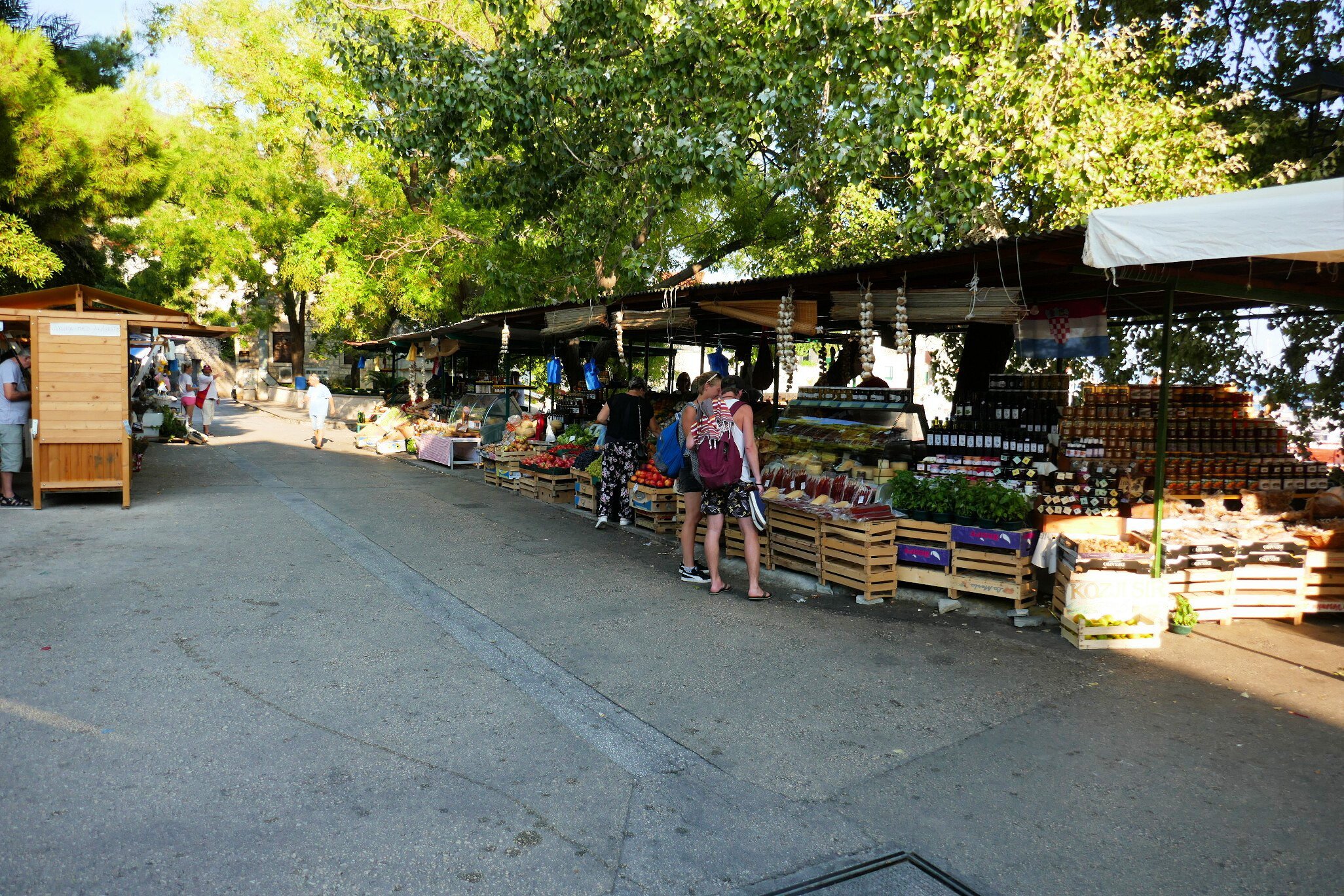 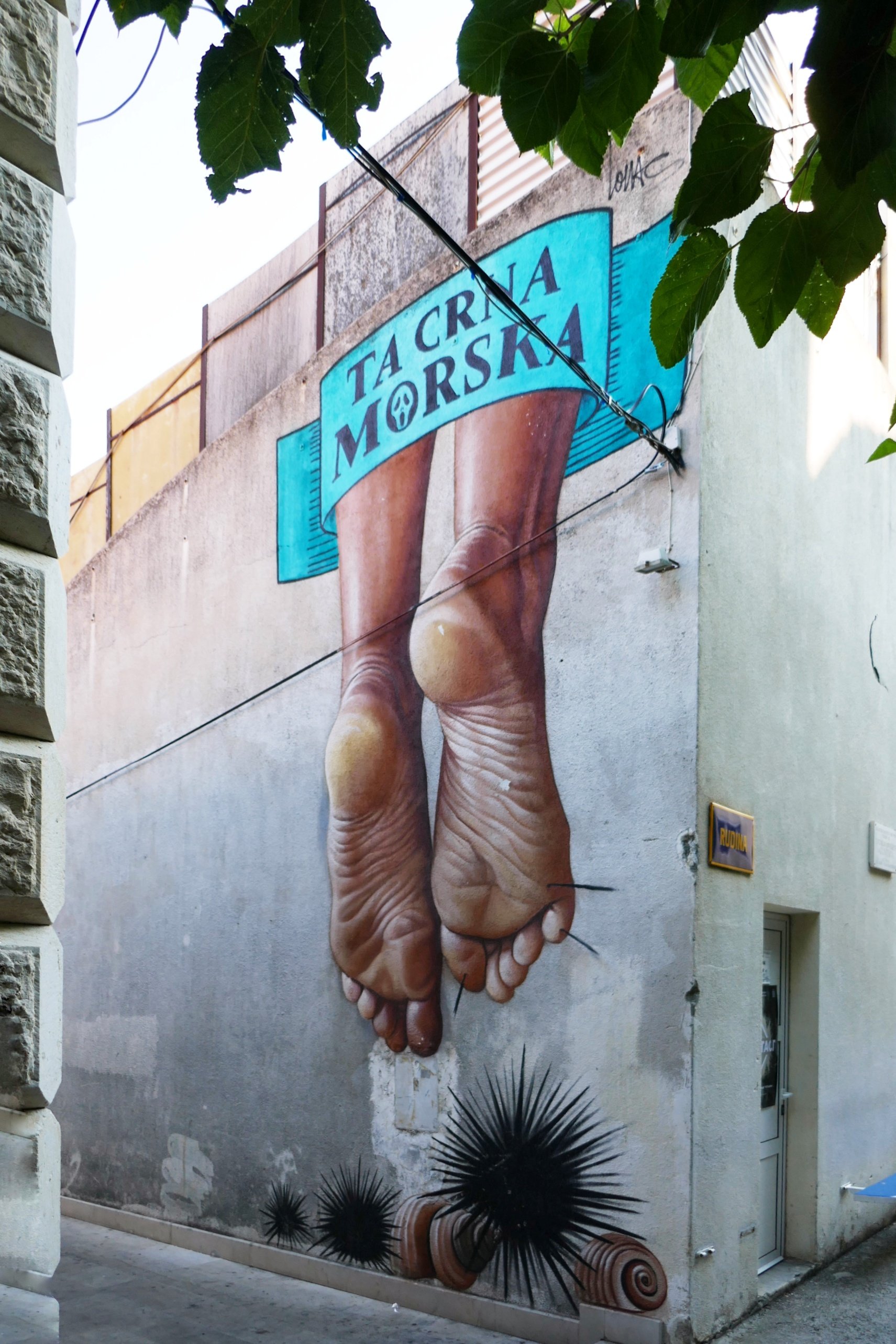 and at least one unintentionally hilarious shop name. 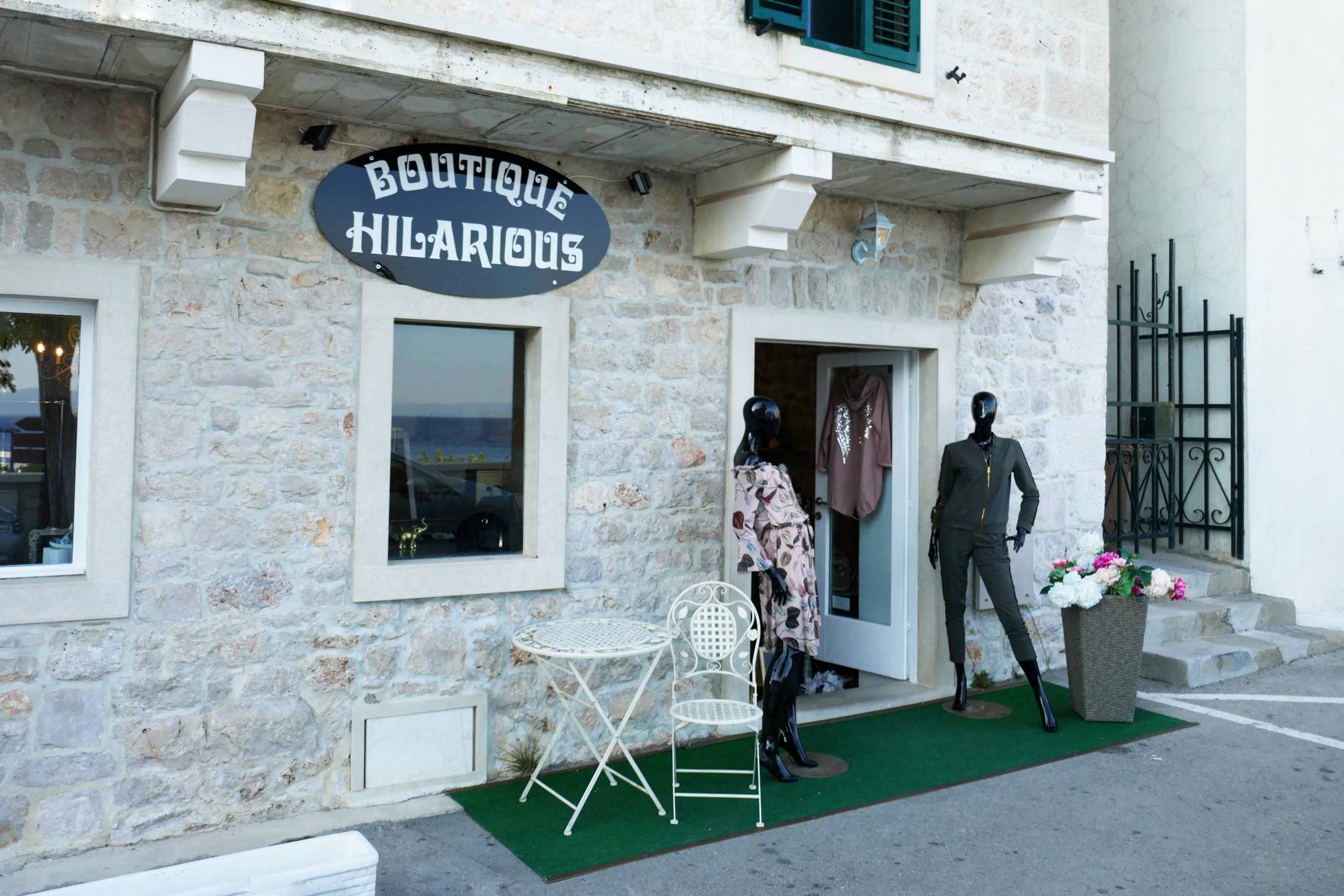 There is a delightful promenade leading from the town to Zlatni Rat beach, pleasant and shady. We walked a little way along it until my need to get back to the hotel for a lie down imposed its imperative. A certain amount of drinking of gin and updating of blogs concluded the day’s activities, and we had to get to bed early because of a really early start the next day. You’ll have to read on to find out about that. My goodness, how the excitement mounts!