The Galapagos islands are a special destination in many ways. Historically significant, touristically exciting (we hope) and ecologically vulnerable because of the bloody tourists. So, although San Cristobal is only some 90 minutes’ flying time from mainland Ecuador, and although it’s just a domestic flight, many aspects of getting there are controlled as if an international flight – and then some.

The passenger lists are scrutinised and controlled very carefully. Because you can’t just potter about the islands by yourself, but must be in a group led by a guide, every embarcation is carefuly checked to make sure that all travellers have a legitimate travel plan. Suitcases are sealed before check-in to make sure that no unwanted materials (meaning mainly fruit, veg, meat, that sort of thing) sneak in. When you disembark, there is a multi-stage process to check people’s provenance and onward plans, and to check, once again, that no extraneous biological matter comes in unannounced – it’s the only time in my life when I have had to answer “yes” when asked if I was bringing in camping materials, as I was wearing hiking boots.

(By the way, I was damn’ glad I had these with me, as on at least one activity in the islands no other footwear would have been appropriate. Our initial materials gave the impression that Teva sandals would be OK, and this was not always the case.)

Such care might result in torturous processes before you eventually get on to the islands, but it’s entirely justified in order to ensure, as best possible, that travellers don’t degrade the environment. Yes, it’s self interest in that tourism is better sustained this way; but also scientific research benefits.

The excellent job Sunvil had done to take us smoothly through three weeks that included five flights, four bus rides, four boat rides, many excursions and innumerable hotel transfers looked in danger of falling apart in the melée at the exit at San Cristobal airport 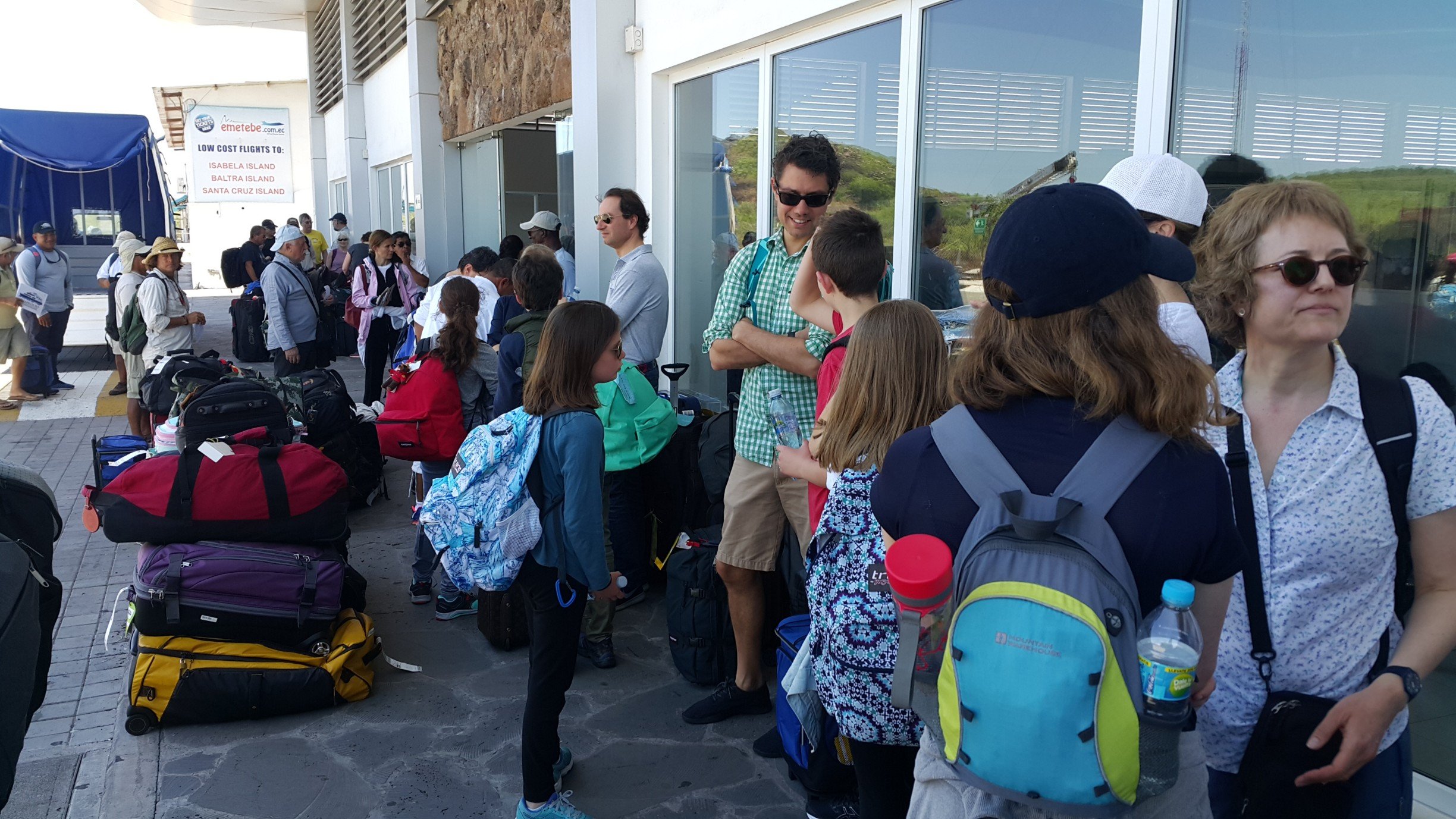 but this was eventually proven to be an illusion, and the planeload of incoming travellers was eventually assigned to buses to take them onwards – in our case to a RIB transfer to M/V Origin, the newest in Ecoventura’s fleet of cruise boats. This will be our home and that for eighteen other souls for a week as we are led around the high and low points of the (southern) Galapagos ilands. We even caught sight of sea lions and a pelican as we waited to be transferred.

The boat is excellent; room for 20 people in 10 very well-organised and well-appointed cabins; a very comfortable lounge/bar/dining room; excellent food; and friendly and competent crew and tour guide/naturalists. Even our first evening’s view from the boat was rather nice, 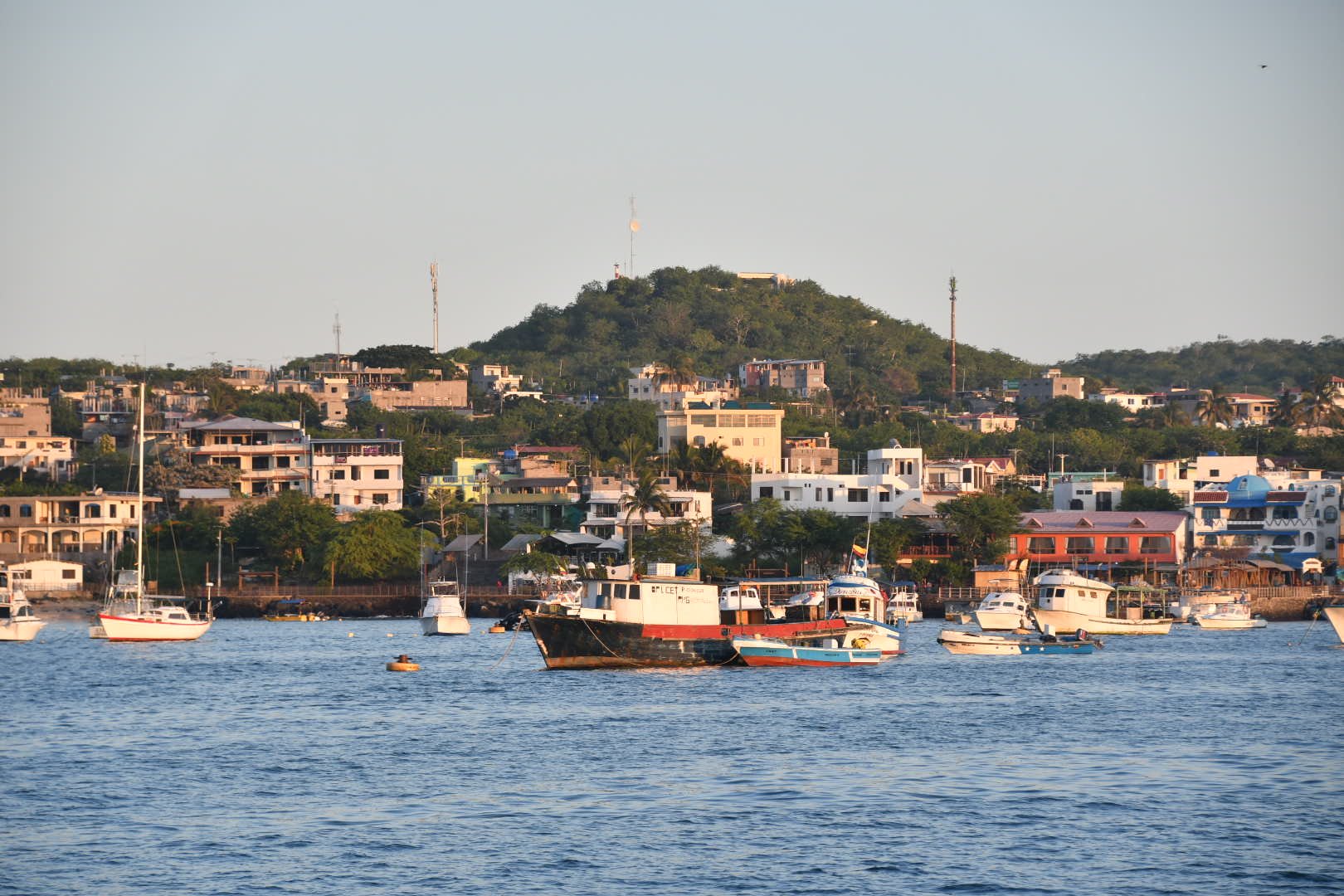 particularly later, as the sun went down. 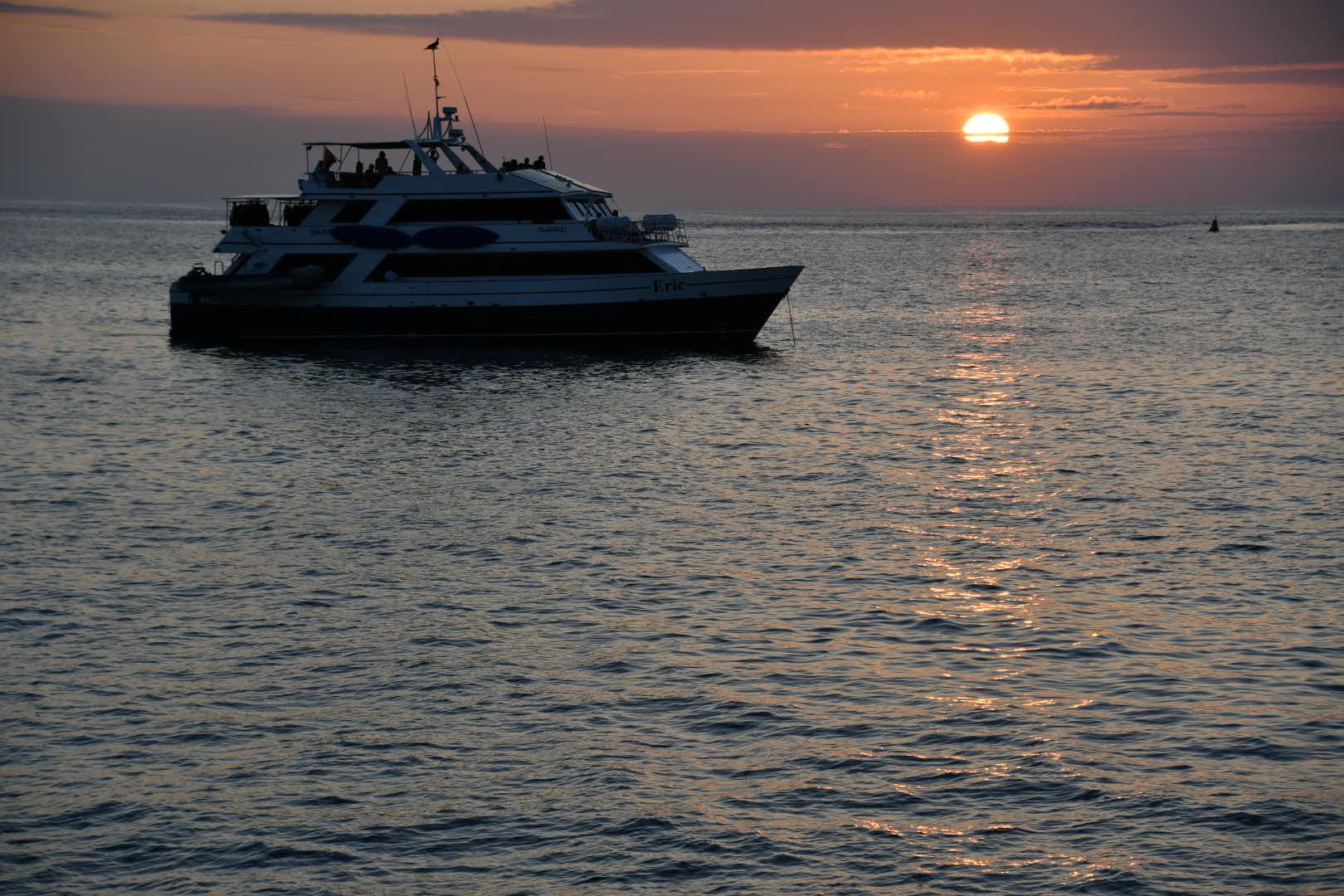 And then – we were off! A spot of lunch (at which we met Allison, Nick and Harry, a very gemütlich family from the UK) and a swift and a thorough safety briefing were followed by immediately going out on a snorkelling trip. This, for Jane and me, was a bit daunting, as we have had very little experience, and getting into wetsuits and snorkelling gear is something of a faff. And the snorkelling experience wasn’t particularly brilliant, as the visibility in the water was poor. I took a waterproof camera with me, and took several photos, but couldn’t, on later examination, work out what they were supposed to be of. I think this is a photo of a sea turtle. 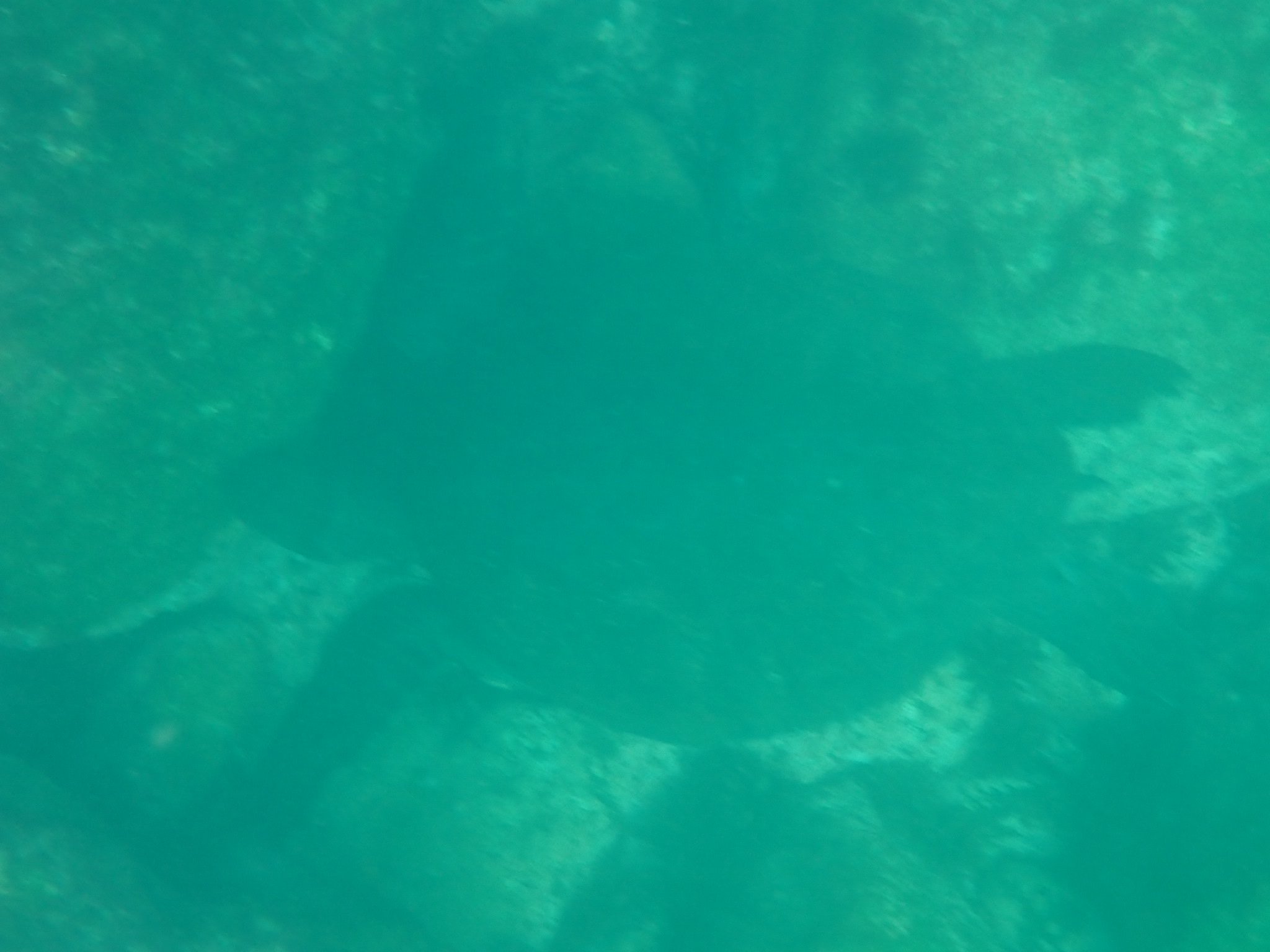 Others were more skillful in managing the snorkelling process and for example managed to get videos of playing with sealions, though. I shall try again later in the week. Maybe.

After we got back and dried off, we had a welcome cocktail of Listerine and Tonic, dinner, introductions to captain, crew and the other travellers on board, and a briefing about day 2, which looked to provide opportunities for hiking, snorkelling, kayaking, beach swimming and being whizzed around in a RIB. As I write this, I feel I may write up the hike instead of going snorkelling, but – who knows. It’s clear that we’re in for an active time!

3 thoughts on “Galapagos 1 (Sunday): Getting under way”