Friday 2nd July 2021. At last! A chance for me to foist upon you my joke about travels among Nordic mountains. Sorry, though – Long Read Alert Again!

The weather forecast according to the Met. Office app was for unbroken sunshine all day. No, really:

This was the reality as we headed for breakfast. 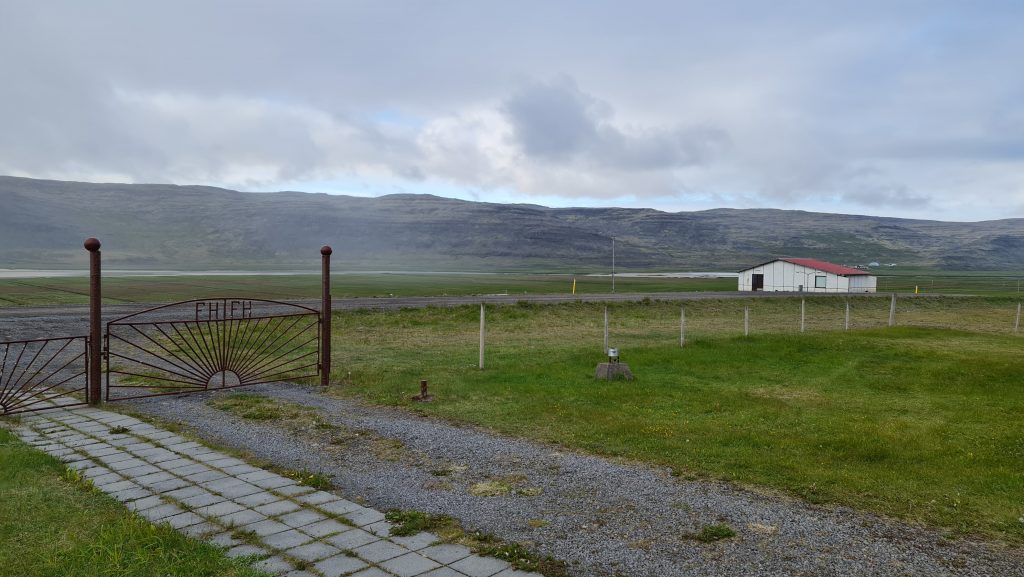 In the event, we had little direct sunshine, but no rain and almost no wind, so a good day for relentless tourism, which we proceeded to embark upon.

The first stop was Tálknafjörður, which Dagur described as “a bit of a sad town”, but which looked pleasant enough.  I guess that, like many Icelandic towns, it’s struggling to survive and thrive in modern times, with Reykjavik and parts foreign proving attractive to young people. Anyway, that aside, its USP is a very unusual church.  Not the bonkers architecture seen in Stykkishólmur (go and look at the blog post for Day 2) or Reykjavik (arrival day), but nonetheless striking. 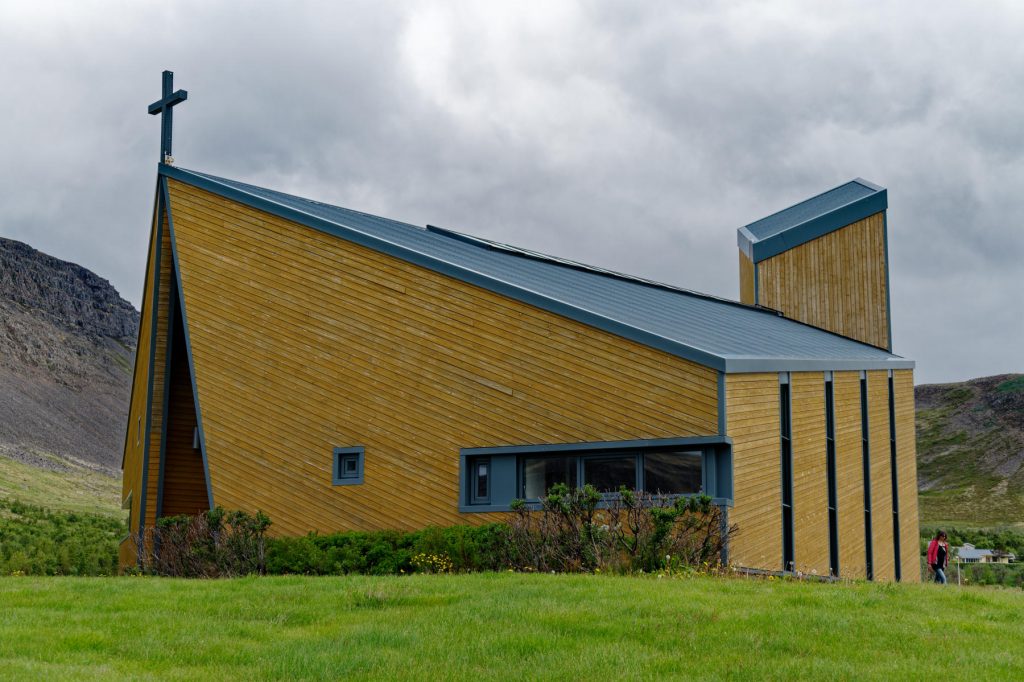 It overlooked a pleasant view, too. Lots of lupins, of course. 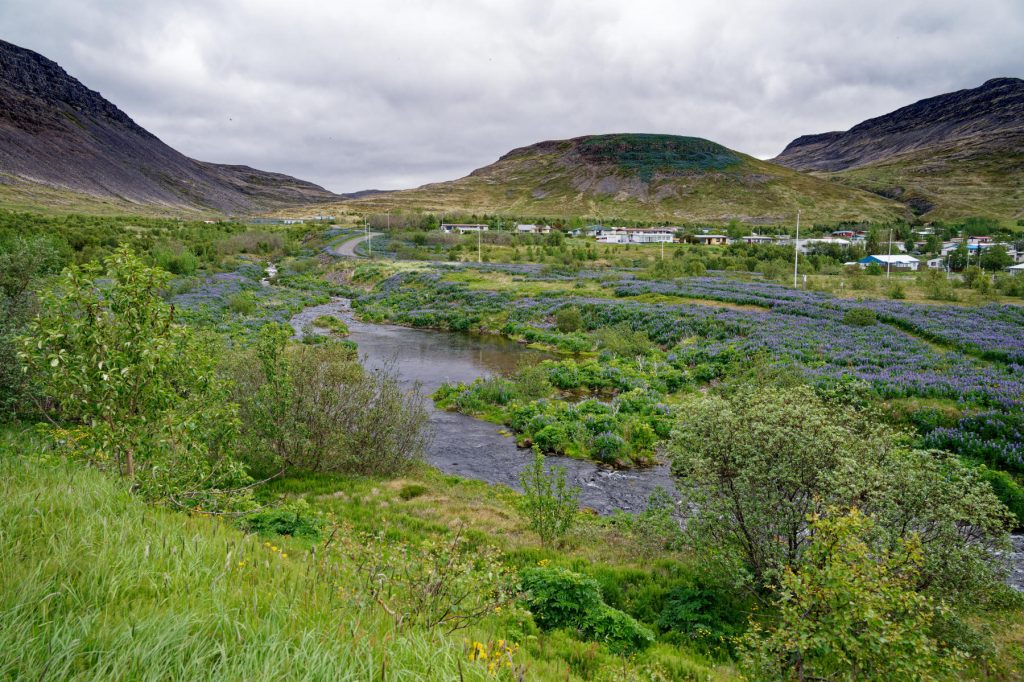 Our onward journey took us up into the mountains as we crossed the knuckle of the peninsula towards Bíldudalur and thence from paved to unpaved road for a bumpy, 25 km, half-hour ride, which, according to Google Maps, took us out to sea. 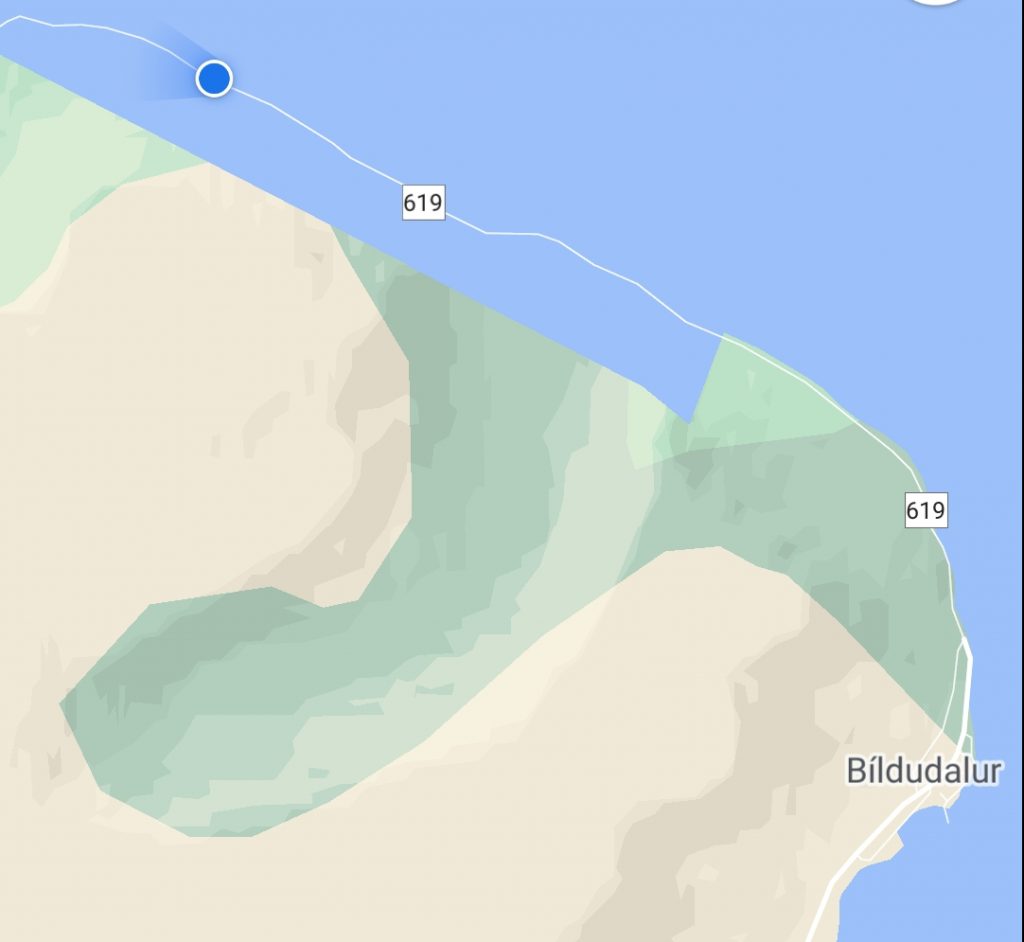 This was a map-reality disconnect, luckily…  Anyway, we bumped along, heading for the outdoor art museum of Samuel Jonsson, who, it seemed to us, Wanted To Be Alone whilst he made his art from driftwood and anything else to hand, as he lived a great distance from what we might regard as civilisation.  The museum is charming. 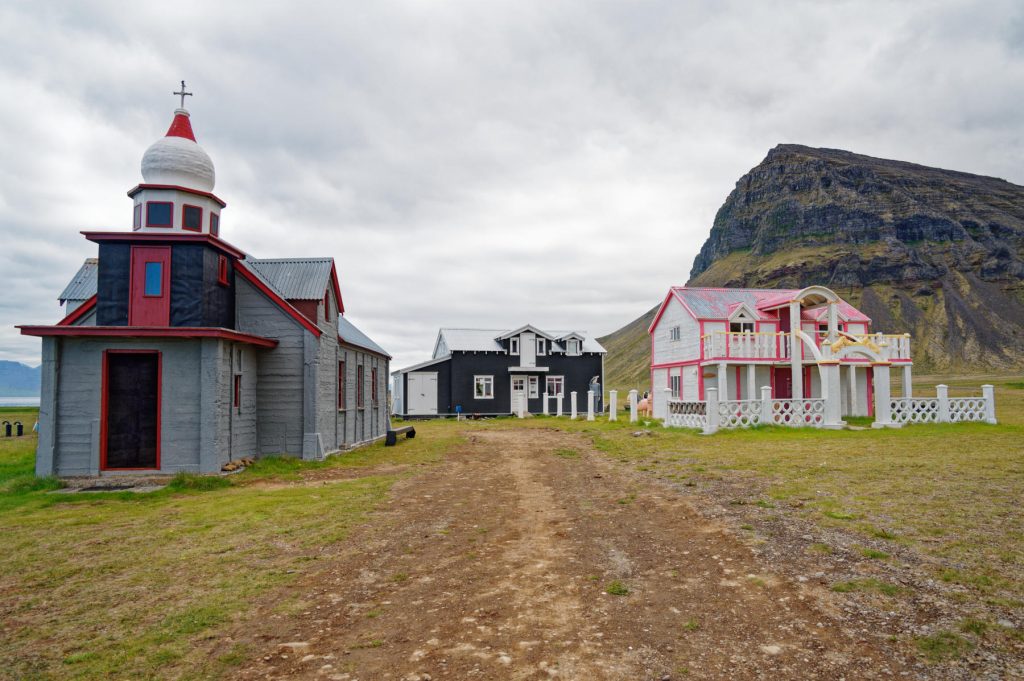 To the left is a church he built, which has a lovely interior, today used as part of exhibiting pictures and other information about him and his art. 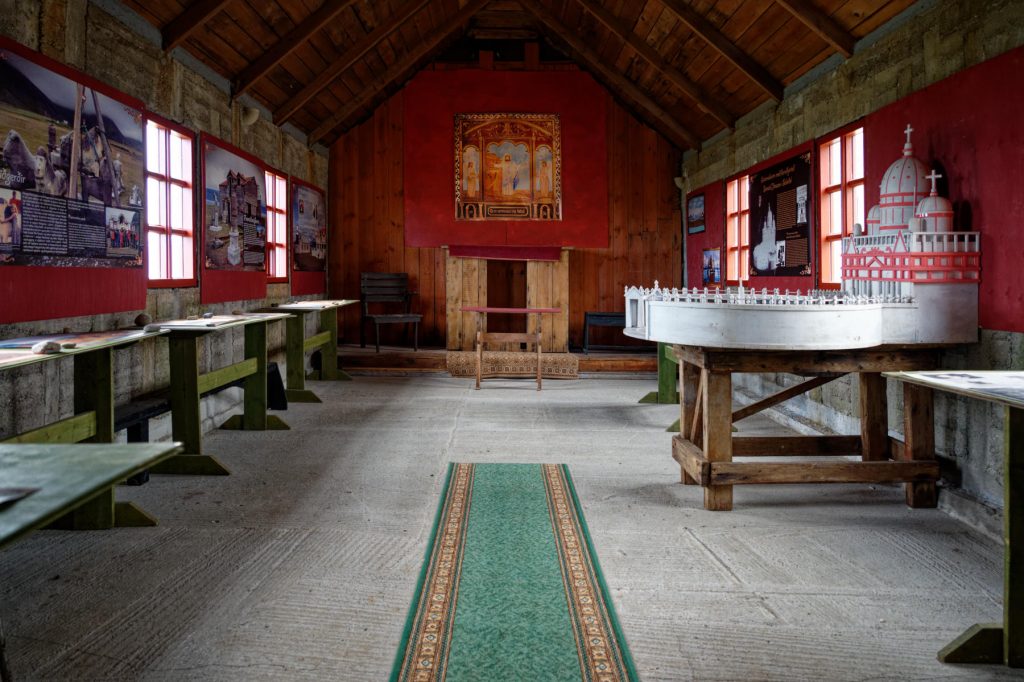 The most striking thing in here is his model of the St. Peter’s Church in Vatican City. 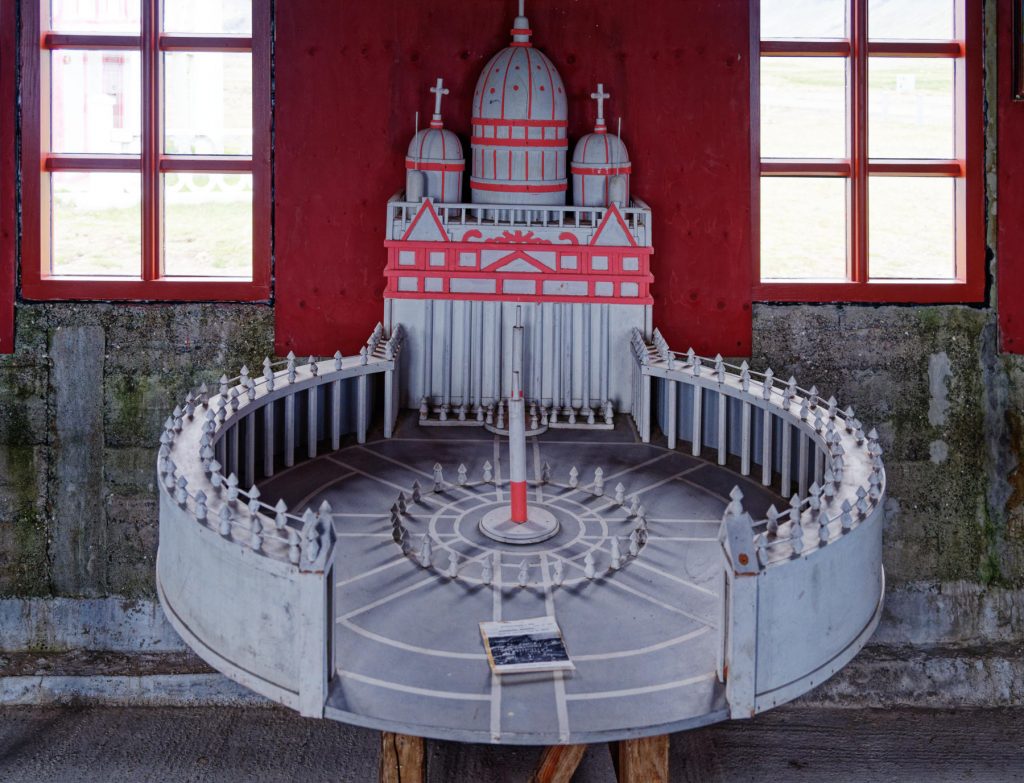 The building to the right of the church is a gallery (not currently in use) and dead ahead is the (rebuilt) house he lived in.  There are various artworks gathered outside. 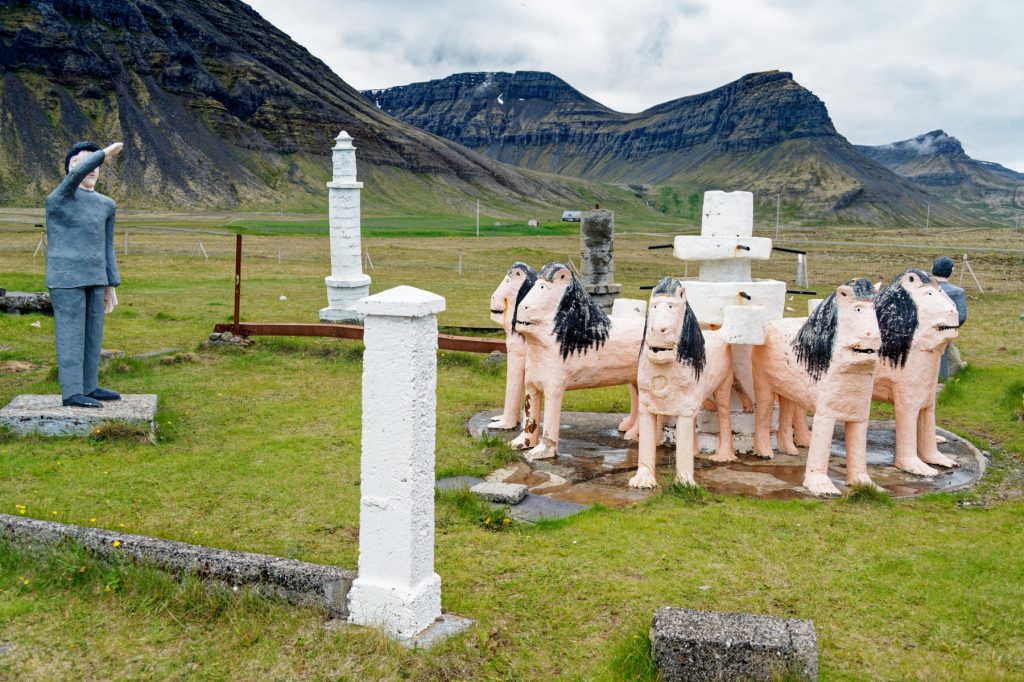 The statue is a recreation of that of Leifur Erikson, which is outside the  Hallgrímskirkja church in Reykjavik; the circle of lions is his recreation of an original from the Alhambra. It’s a working statue, after a fashion, in that it needs manual charging with water.

The place seemed awfully remote to us, and we wondered how on earth one could sustain a life so far from the nearest town.  But the lady in charge of the exhibition pointed out that things have changed in the nearly 100 years since Jonsson first lived there.  For a start, Bíldudalur was a much larger town then, and had a variety of shops; also Jonsson lived among a community of some 200 souls, with another one of 100 people not far away; and, of course, there was much more reliance upon supplies being brought in by boat. So life wasn’t as tough as we might have thought when viewing it through 21st-century eyes.

After bumping our way back to today’s version of civilisation, we headed again into the mountains. En route, we did stop to see something quite uniquely Icelandic – an outdoor, public, hot spring bathing pool. 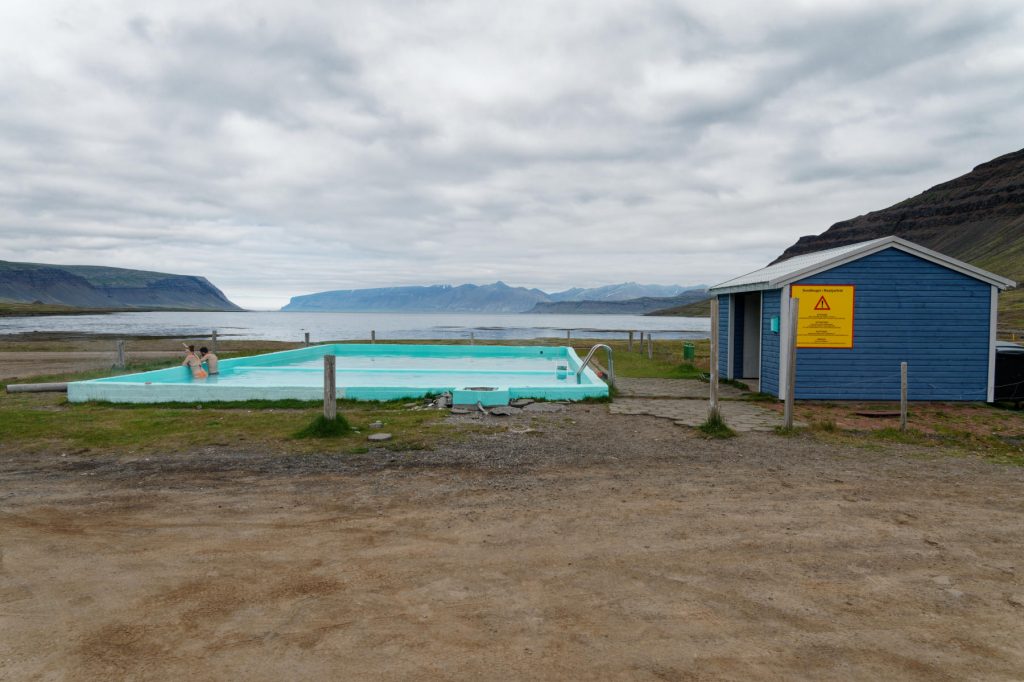 One can just change in the little hut and bathe in the hot water – it’s a public facility.

The paved road then gave way to another ungraded surface which took us up into the mountains where we actually saw some residual snow. This remains even during the summer, in those shady parts where the sun can’t reach. 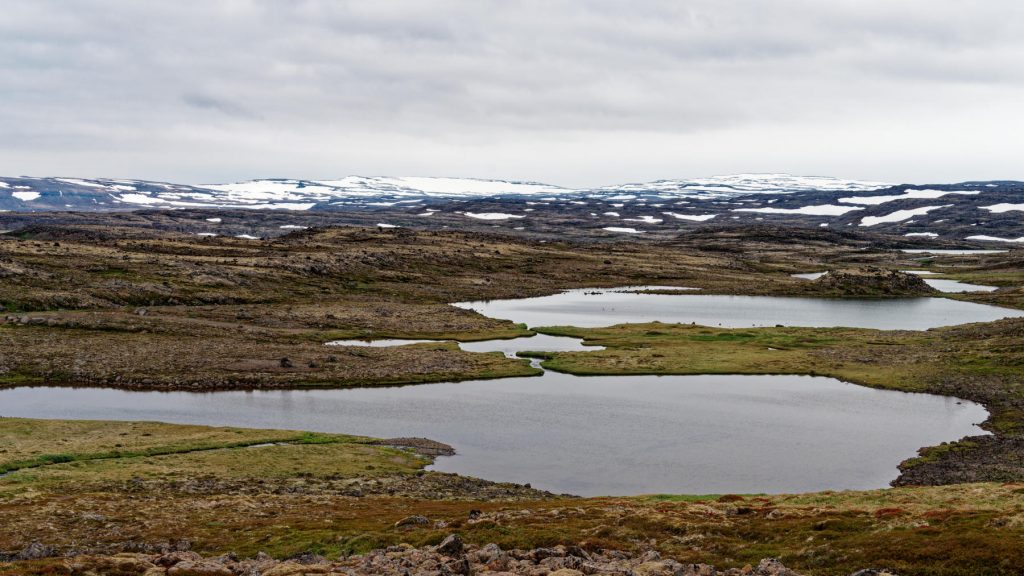 The next stop was a treat, as it was a visit to the biggest waterfall in the Westfjords – the Dynjandi waterfalls.

There are seven waterfalls, each of which has an individual name, and there’s a path one can climb to pass them all on the way to the big one – Dynjandi itself. 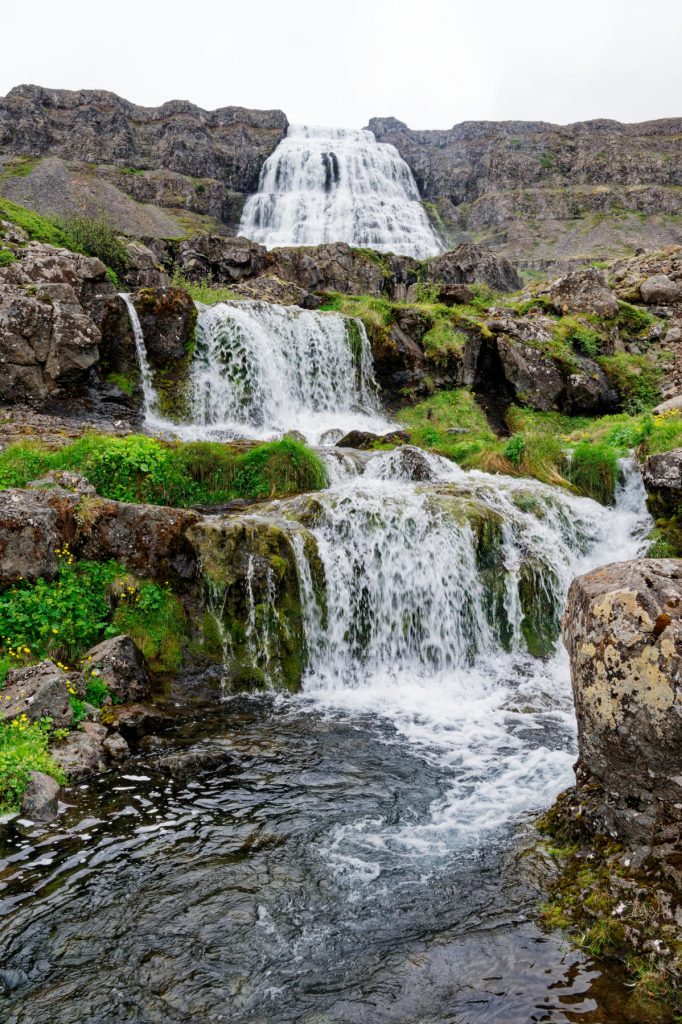 It really is a great place to visit, a very impressive sight and well-organised.

We lunched there on sandwiches bought earlier and then headed round to the next peninsula in the Westfjords, to a place called Hrafnseyri, where there’s a museum which features a replica of a turf-roofed house 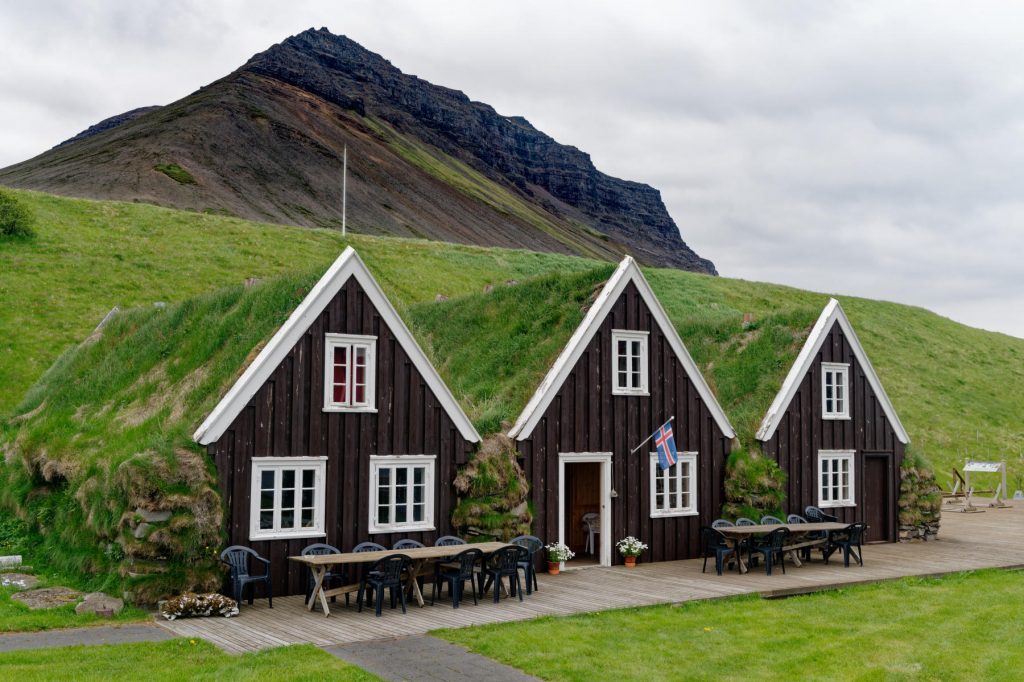 and a rebuilt version of an old church. 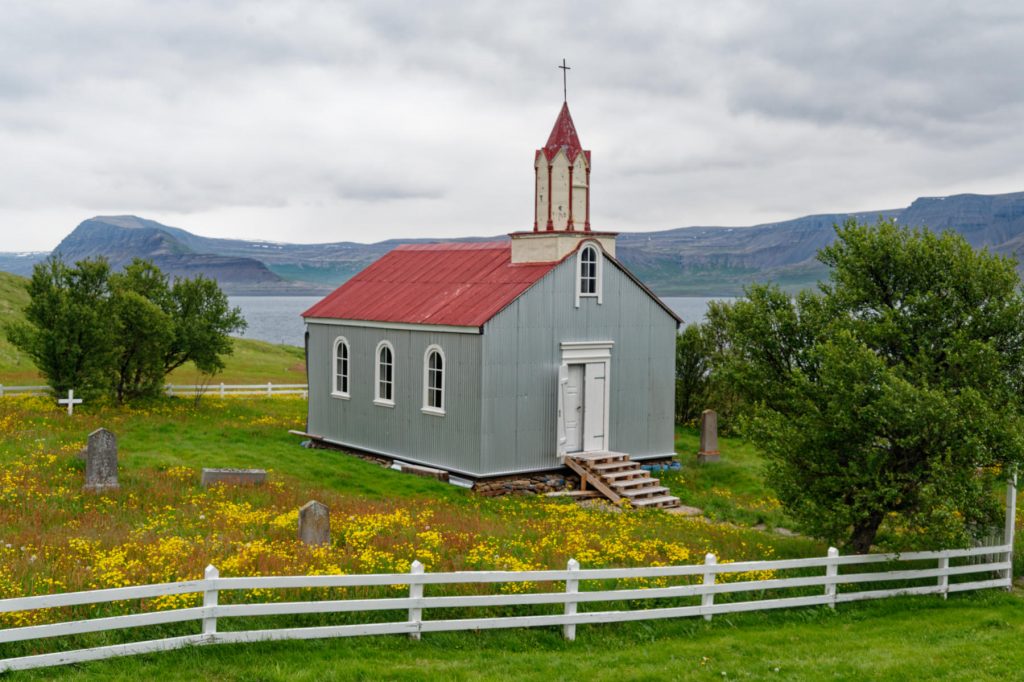 After this visit, we headed – again across the knuckle of a peninsula finger – towards Þingeyri. As ever, this mountain road gave us some impressive views. We were lucky enough to witness a phenomenon which is not uncommon in Iceland, but is not the sort of thing you often stumble across in the UK – valley fog.  Clouds appear to be spilling out of the fjords into the sea, and it’s a striking sight. 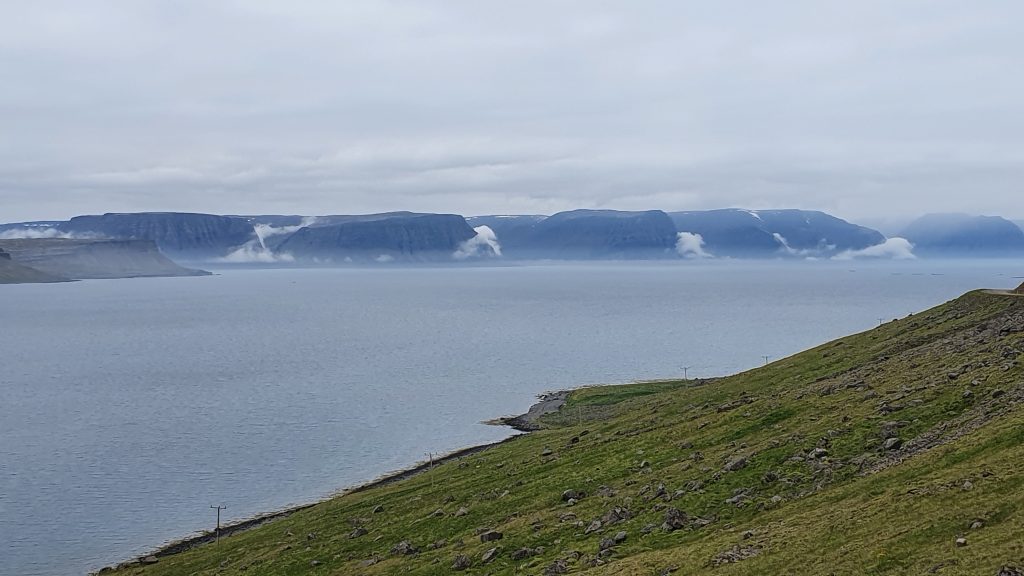 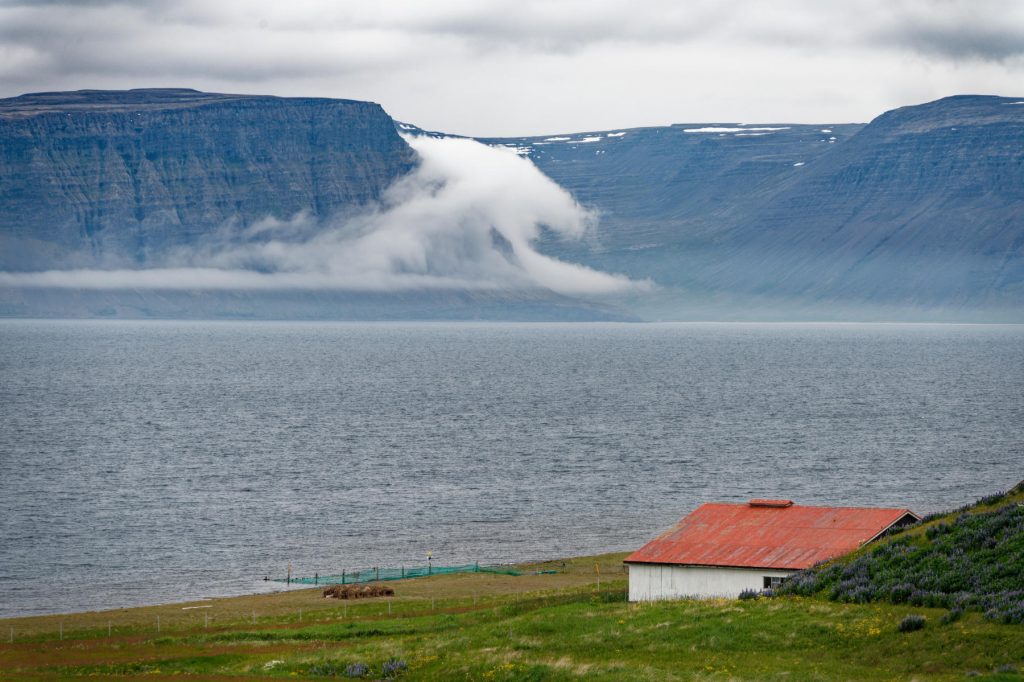 There were, of course, other impressive views over the fjords. 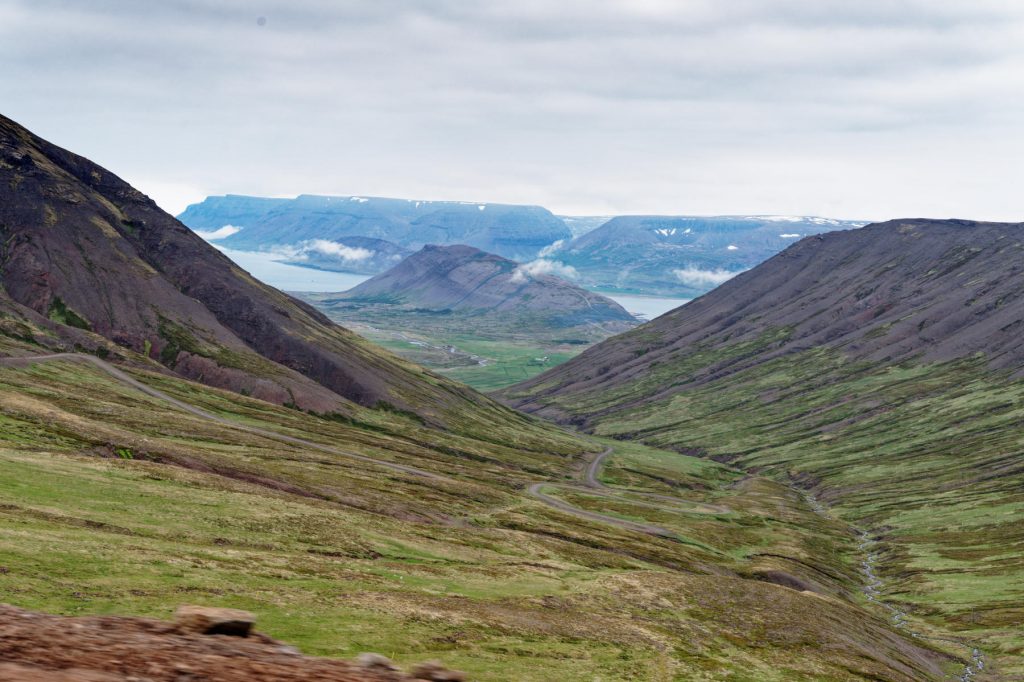 and, as we neared Þingeyri, Dagur suggested we could try an interesting track across a hill (the one in the centre in the above picture, actually) which offered some fine views.  So, off we went. But only so far, as it turned out to be such an arduous climb that Dagur wasn’t sure that even a modern Land Rover Defender could handle it without risk. So it ended up with Dagur and me scrambling up the rest of the path to the top. I just thought you might be interested in a the vital signs of a photographer as he ascends a climb taking photos on the way, wanders about taking photos at the top and them comes down again: 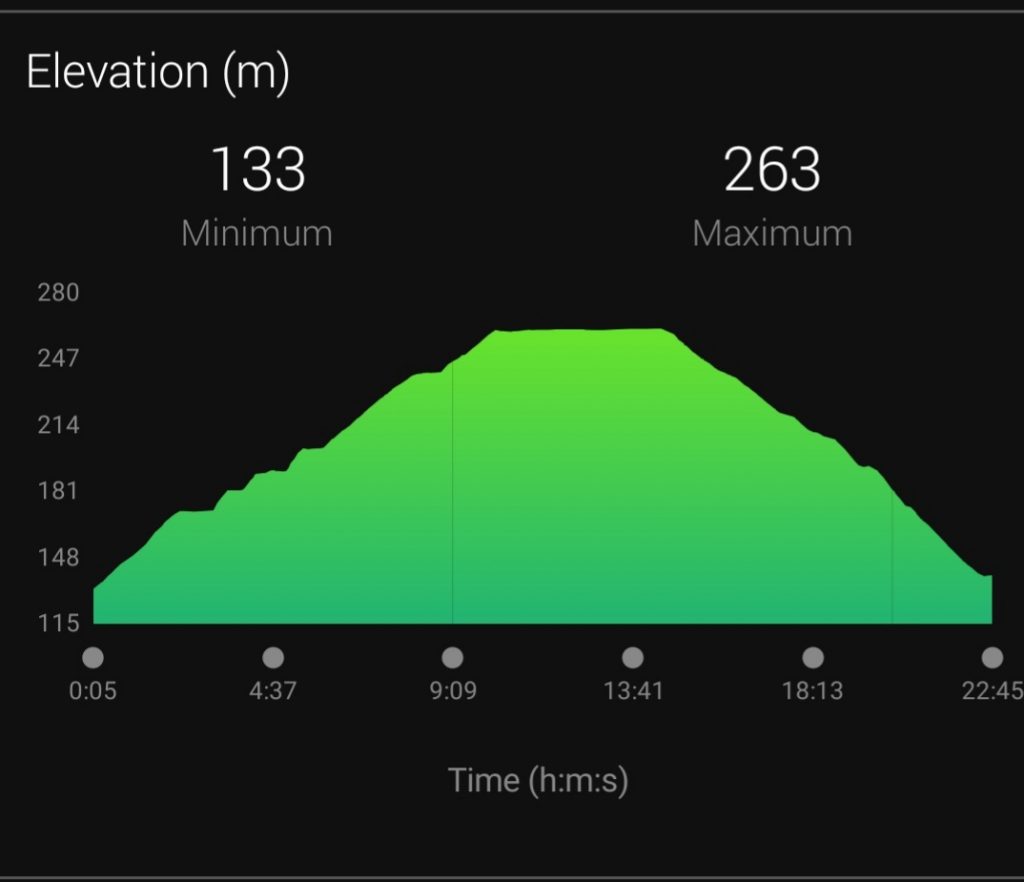 But it was worth the climb for some fantastic views. 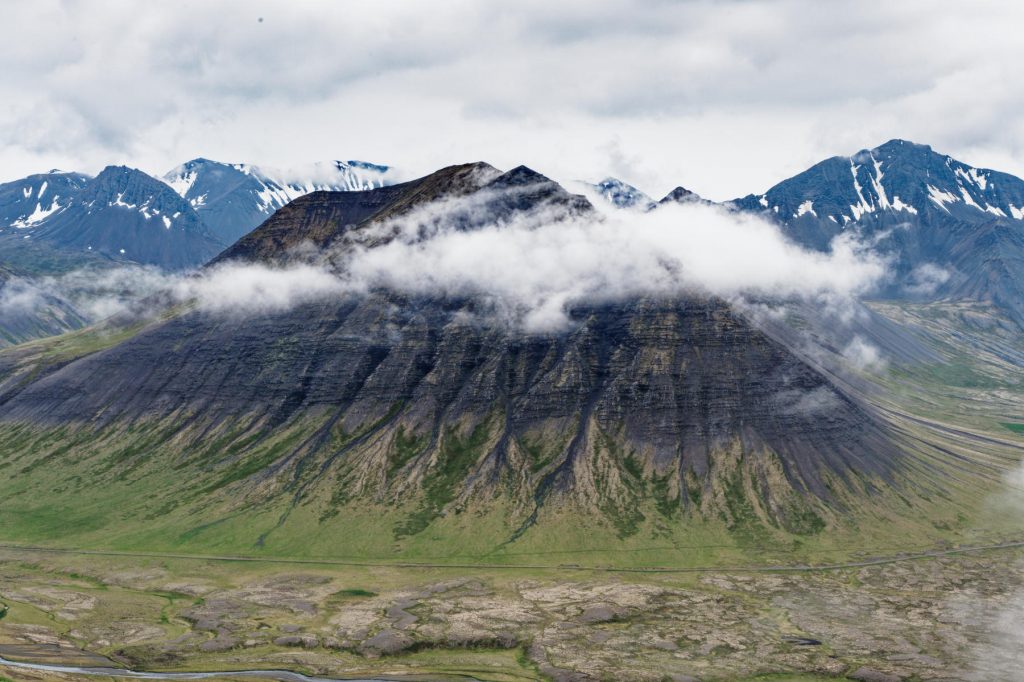 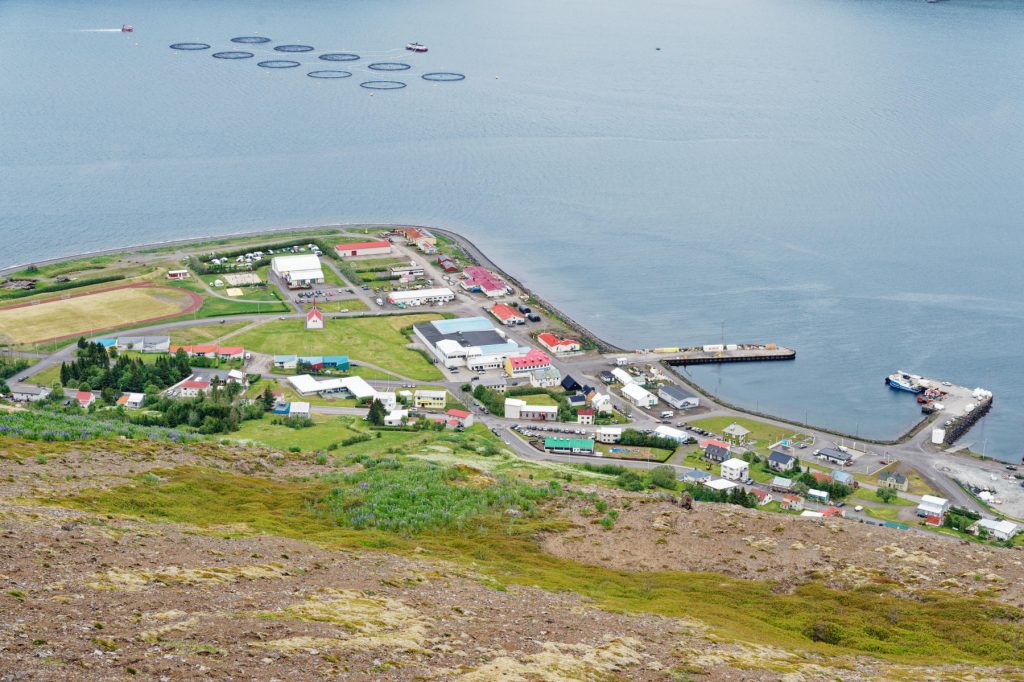 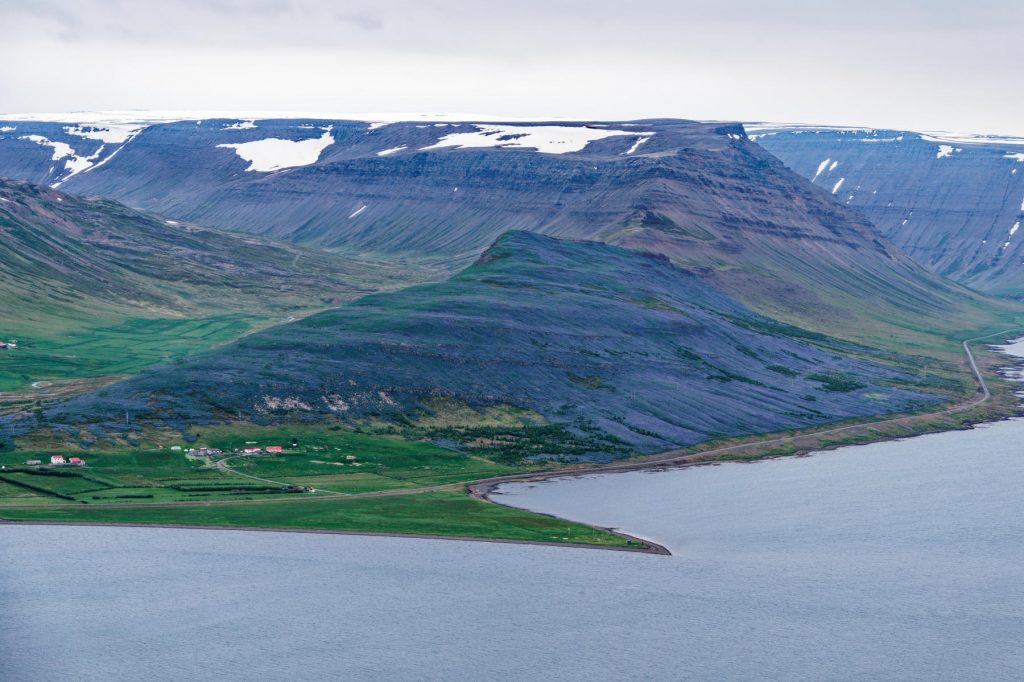 (Note the vast extent of the lupins in the last of these photos.)

After a very careful descent, we visited Þingeyri and then travelled around to the next finger of the peninsula towards Flateyri.  En route was a uniquely Icelandic scene. 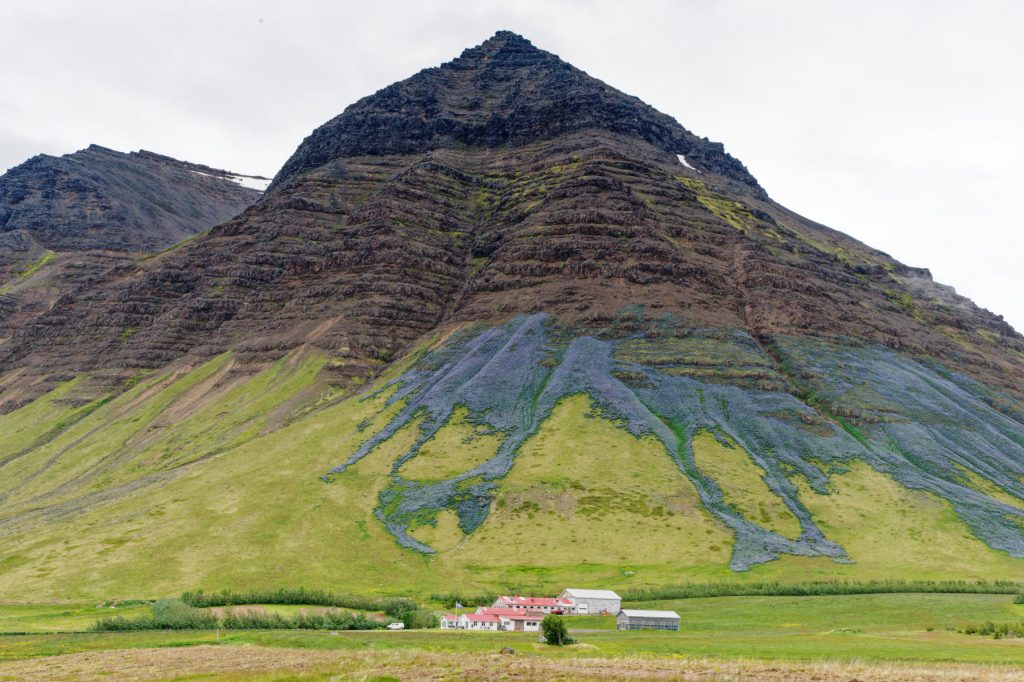 A perfectly pointy mountain above some houses and swathes of lupins.  I’m so glad we came whilst these were in flower.

The final stop of the day was to marvel at the size of the earthworks they’ve built above Flateyri to protect against avalanche. Here are pictures of the right-hand wall and the overall sight from the harbour, but it’s difficult to convey how huge the endeavour is to build this. 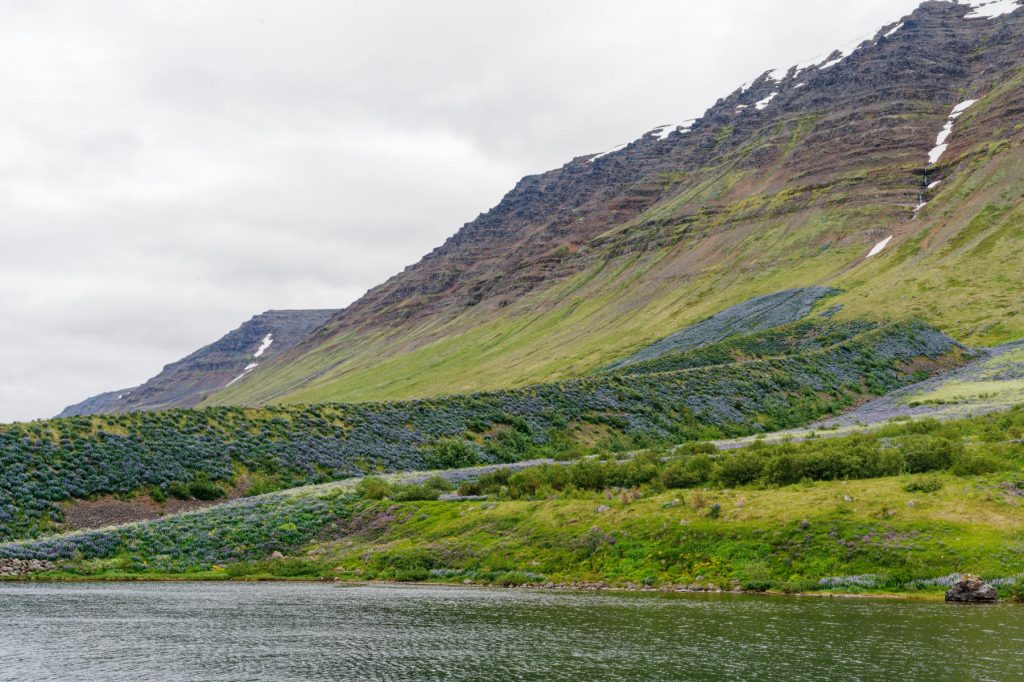 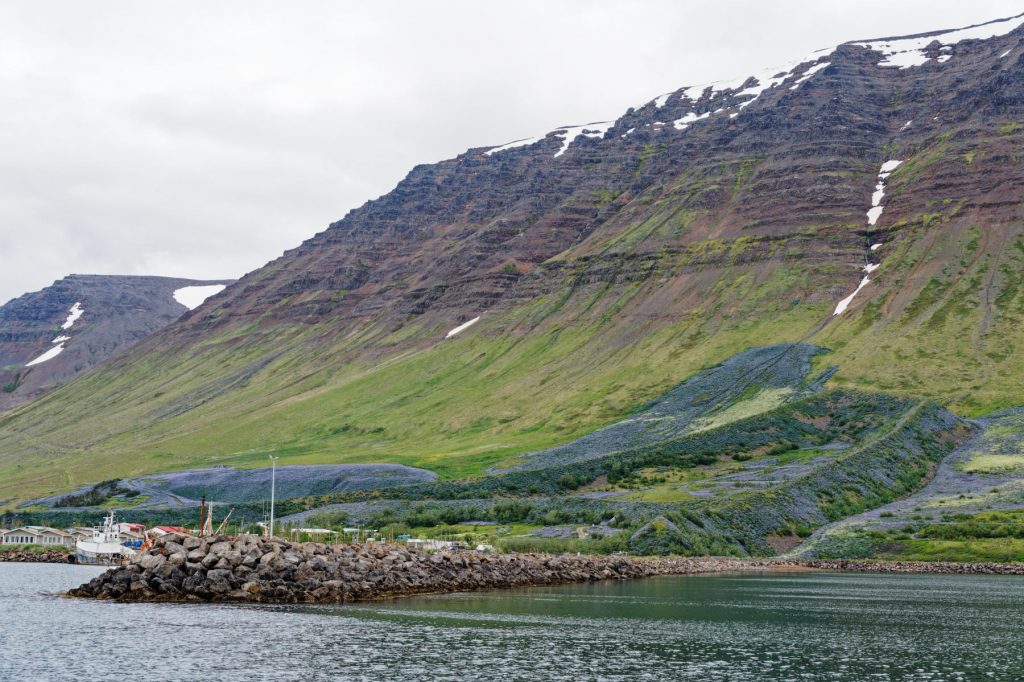 We then headed to our final stop for the night, Ísafjörður. We checked in to the eponymous hotel, had a very fine dinner, which featured wolffish, and took a brief stroll around the town… 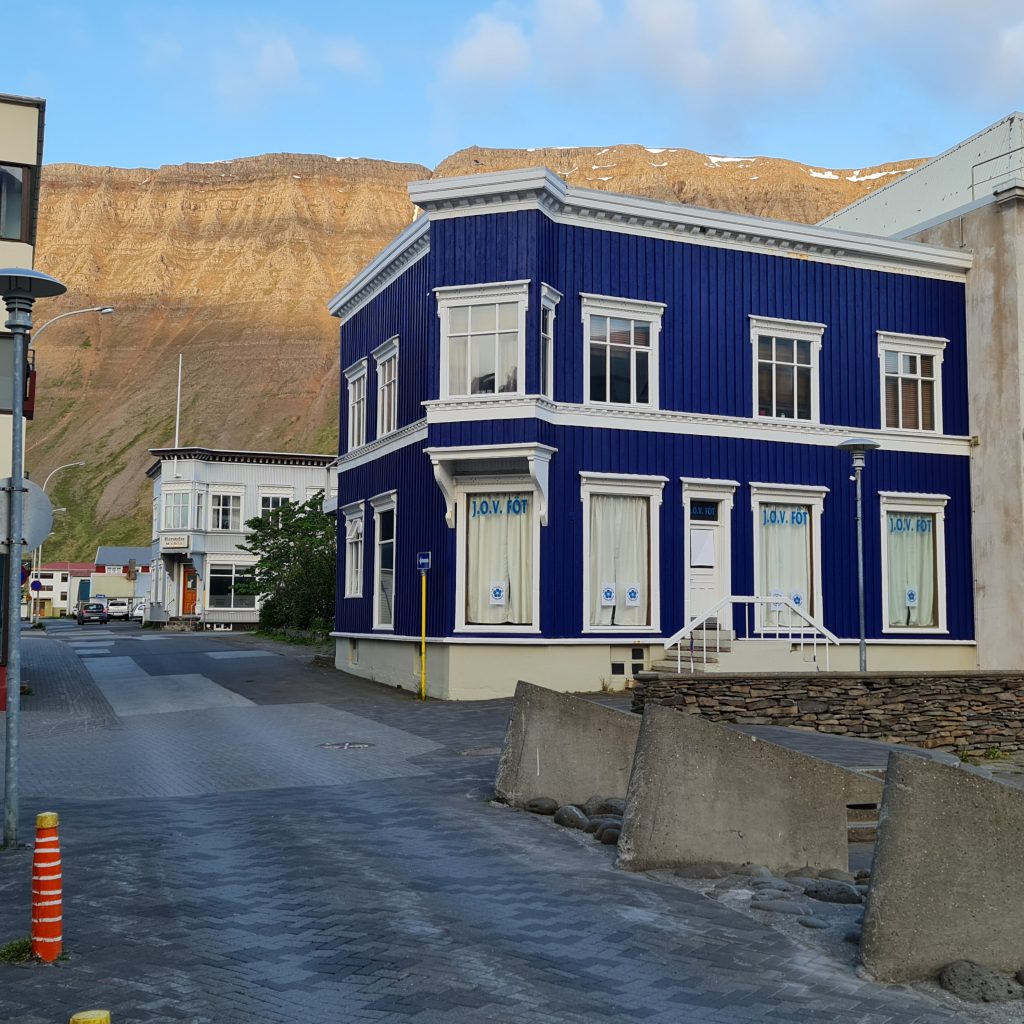 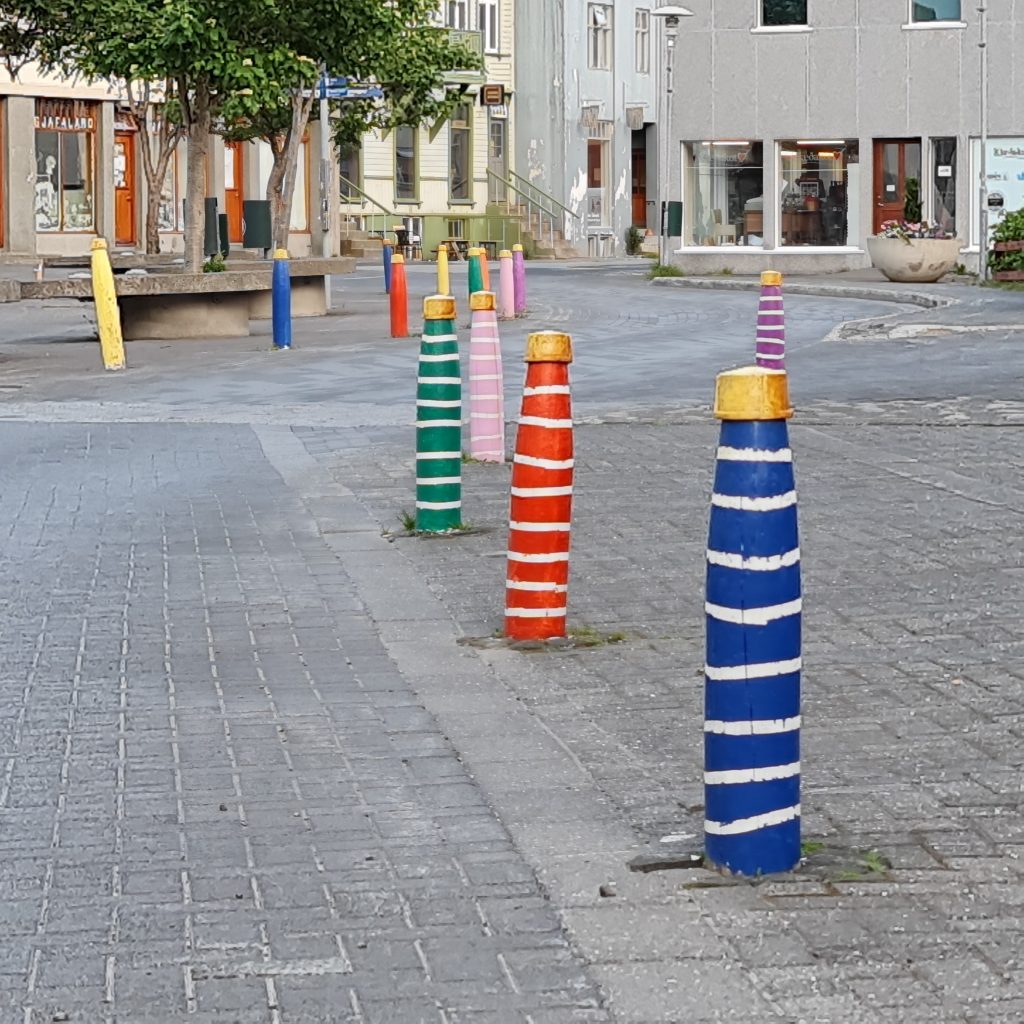 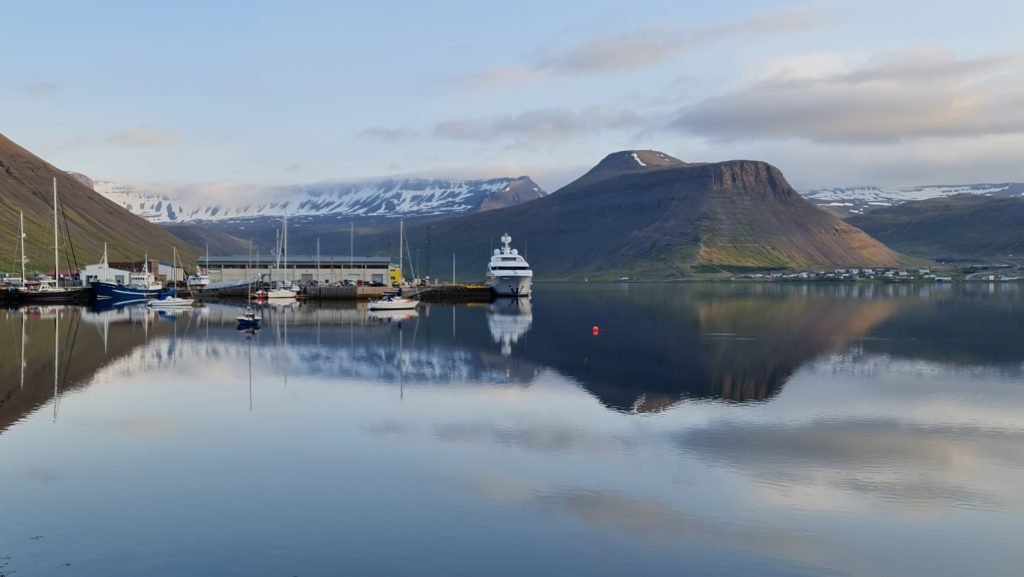 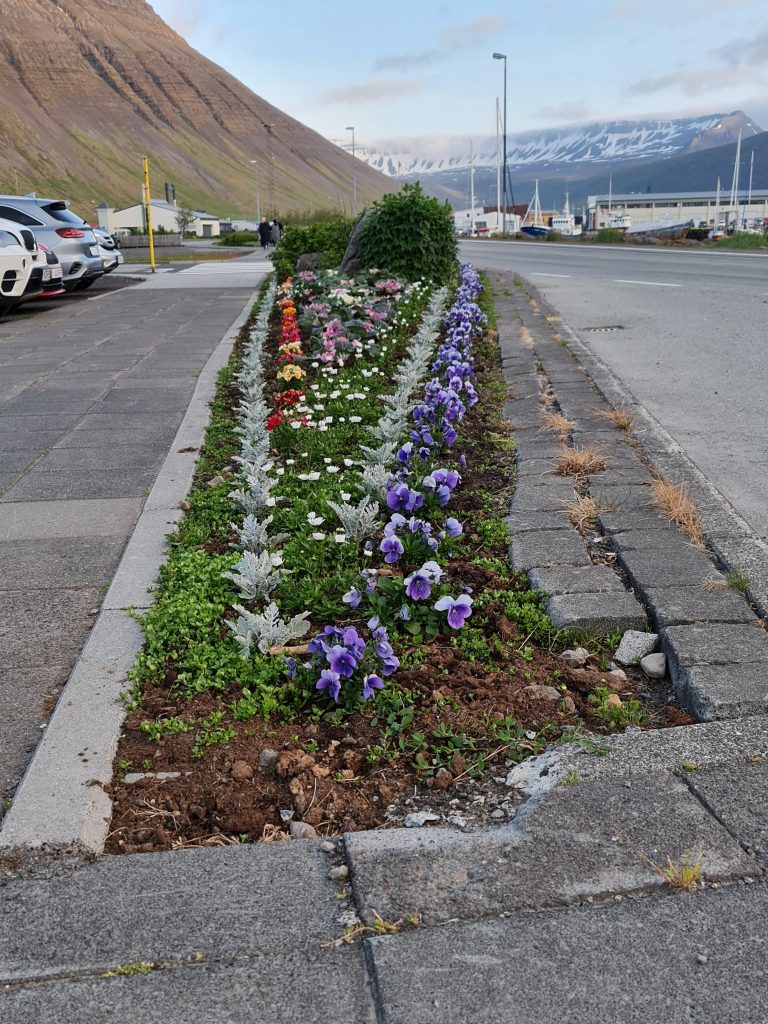 and thence to bed.

I’m promised that tomorrow will be spent mainly driving and so there really, really should be fewer photographs and drivel from me.  Thank you for reading this far, and I hope you’ll check in on tomorrow’s exploits.